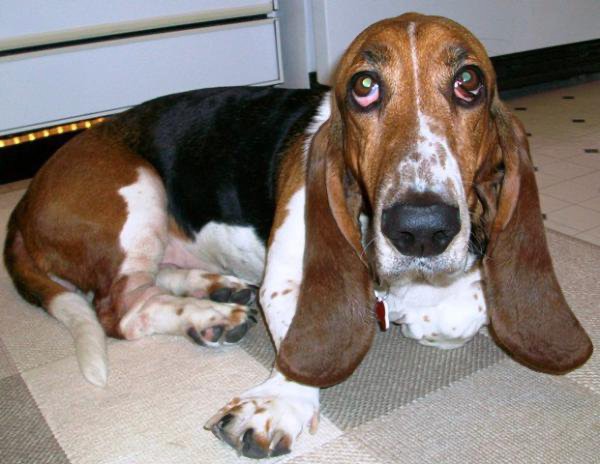 It's been 9 years already, where I headed north from 'the tropics' to NW Indiana near Merrilville to pick up Heidi from her foster mom. I had found her for adoption on Guardian Angel Basset Hound Rescue in Illinois and knew instantly she needed to be with Winston and Sadie. That was July 28th, 2011. I had stopped by Costco and picked up a new dog bed since I had time to burn. I had forgotten they were on Central time where I was on Eastern time in the same state.

She spent the first 15-20 minutes of the drive literally talking to me non-stop as if she was telling me her story. I had the dog bed sitting level with the front seat on stacks of bagged dog food. She had the perfect view out the window for the four hour drive home. 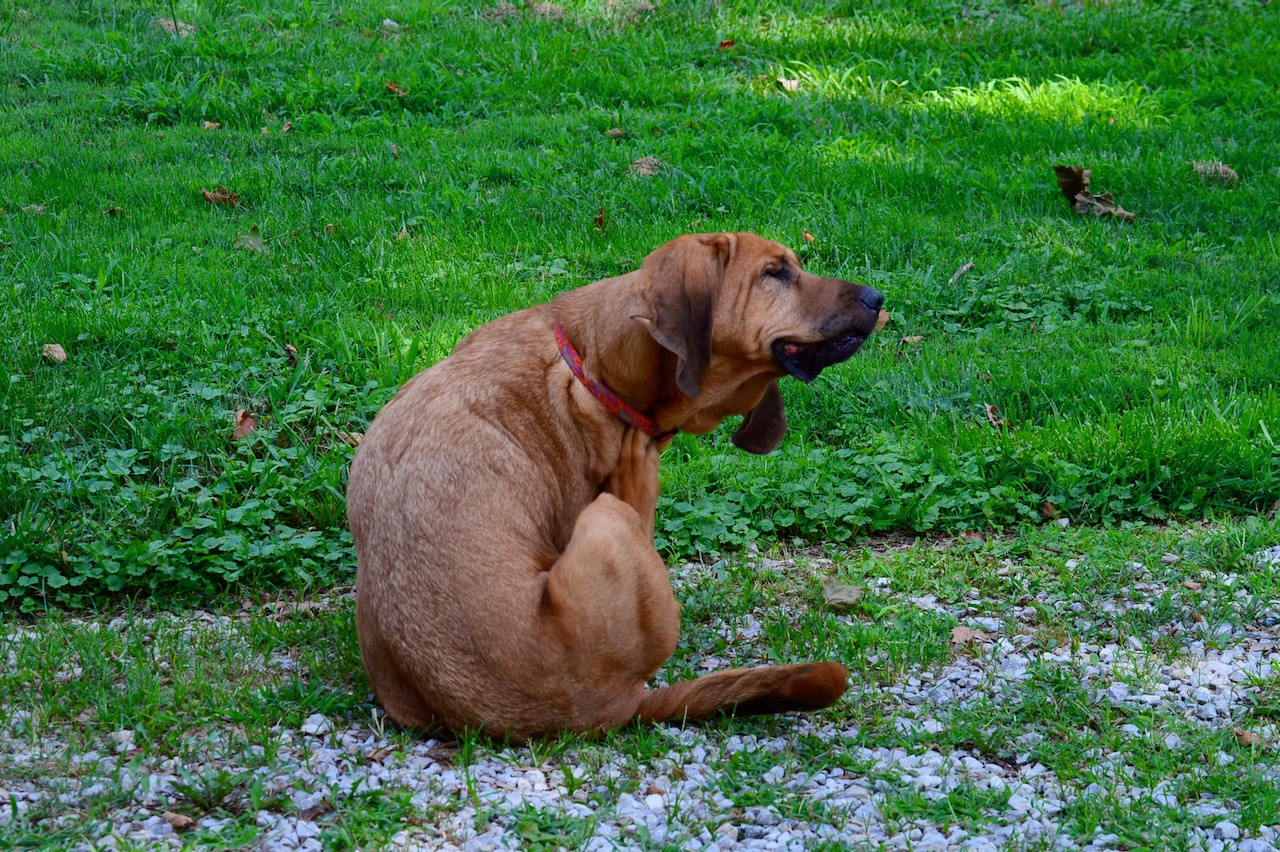 After I searched for that photo I decided to go back through my library of photos and search for each year on this day. Here are a few from past years in July 28th. For some reason on all of these photos that were taken outside I can feel the muggy humidity through each photo. Stella has stopped scratching all the time since moving to the "Wild West". 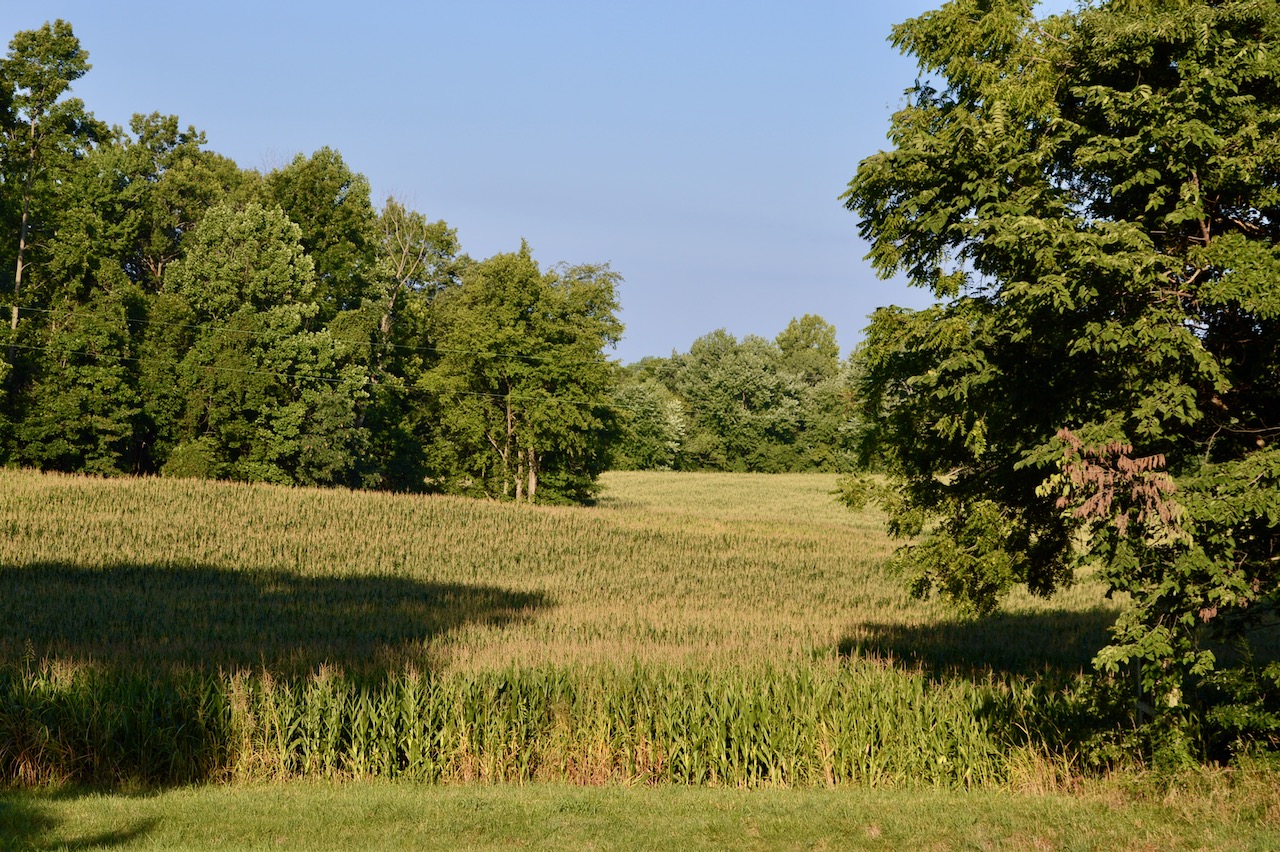 It's a long way from corn country to the high desert. It was a great move at just the right time. 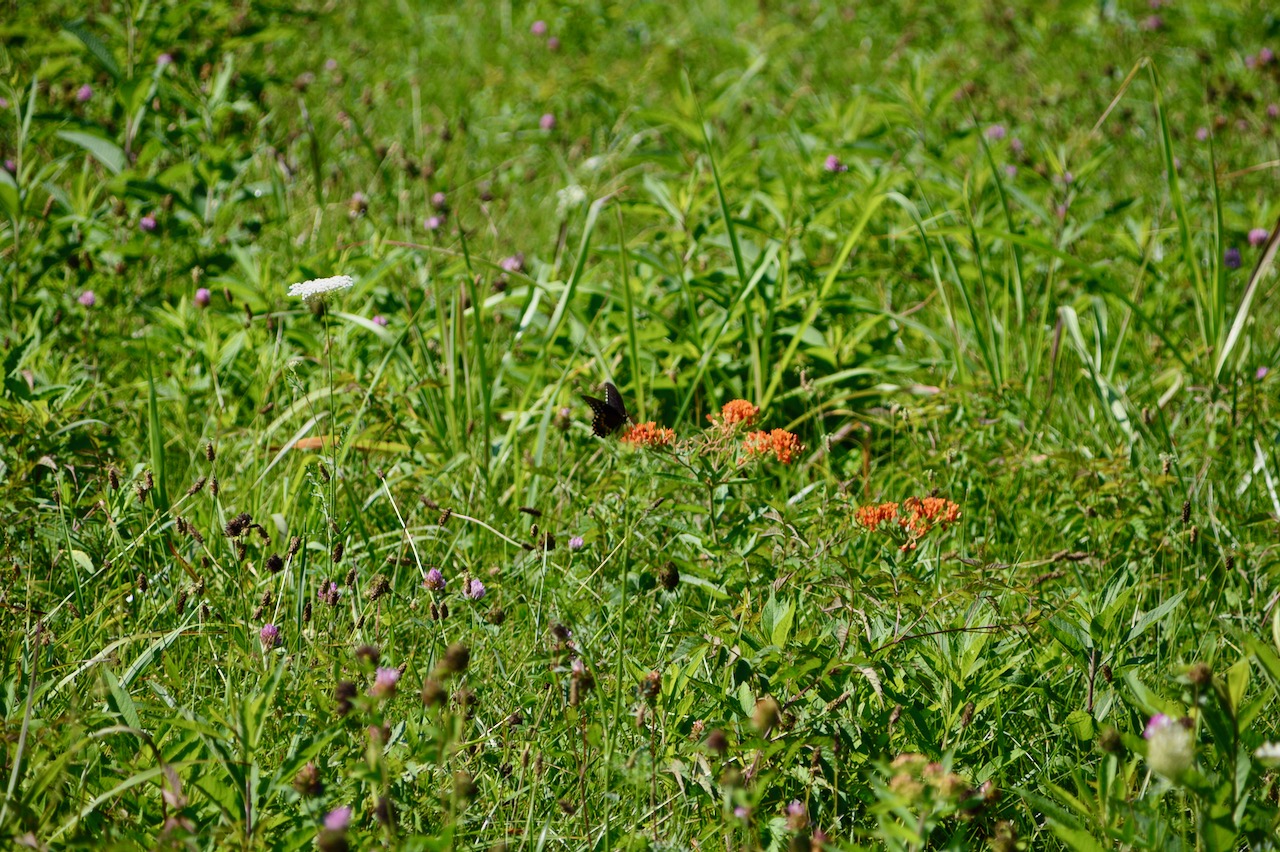 One thing I don't see as much out here are butterflies. I could if I would plant the correct plants and flowers that would attract them. But when I think of landscaping I think of more chances for snakes to visit me and the hounds and Walter. 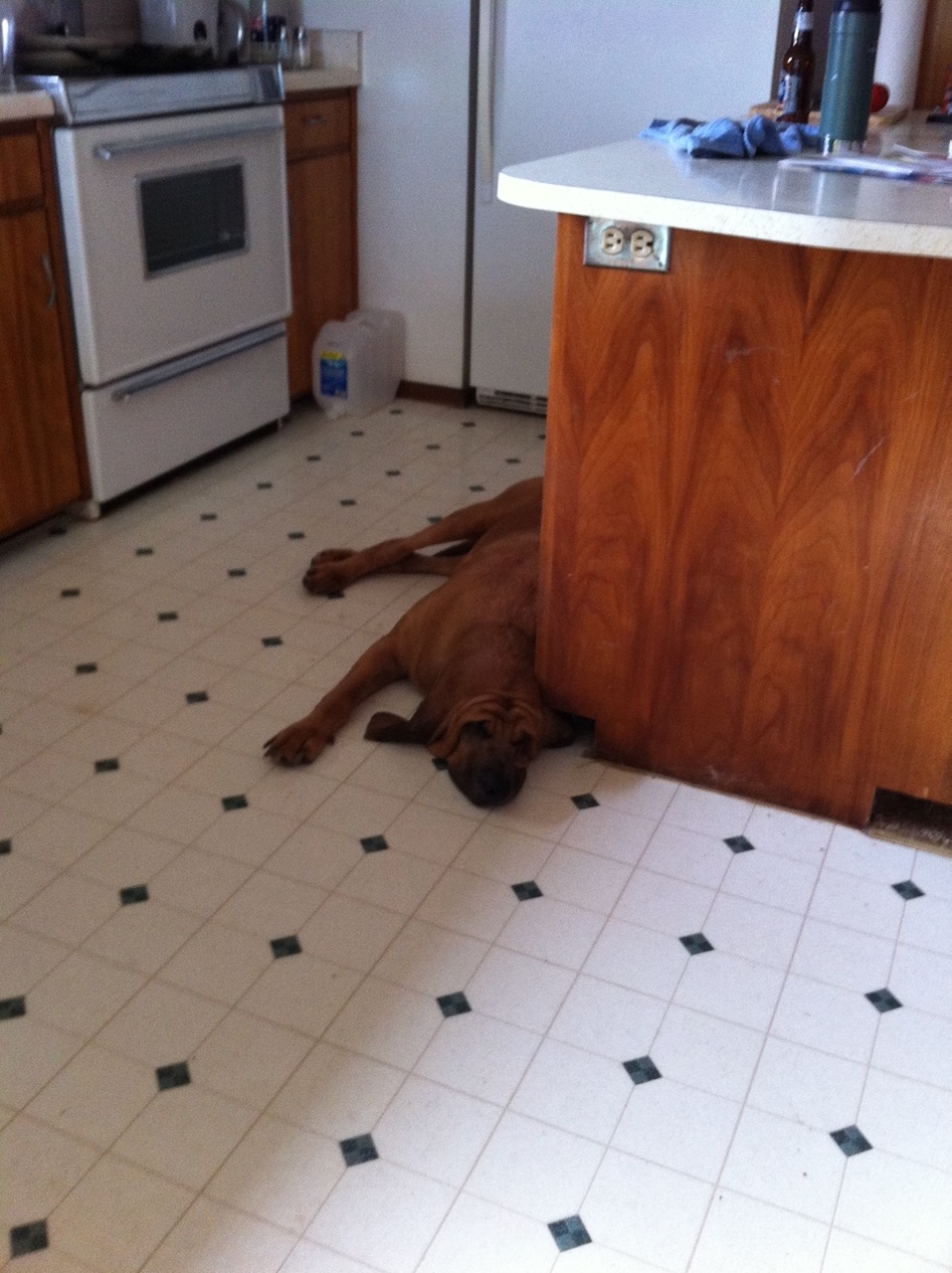 In 2013 it was hot and muggy I imagine back in 'the tropics' and even with the AC running this was the coolest spot in the house for Sadie to sleep. 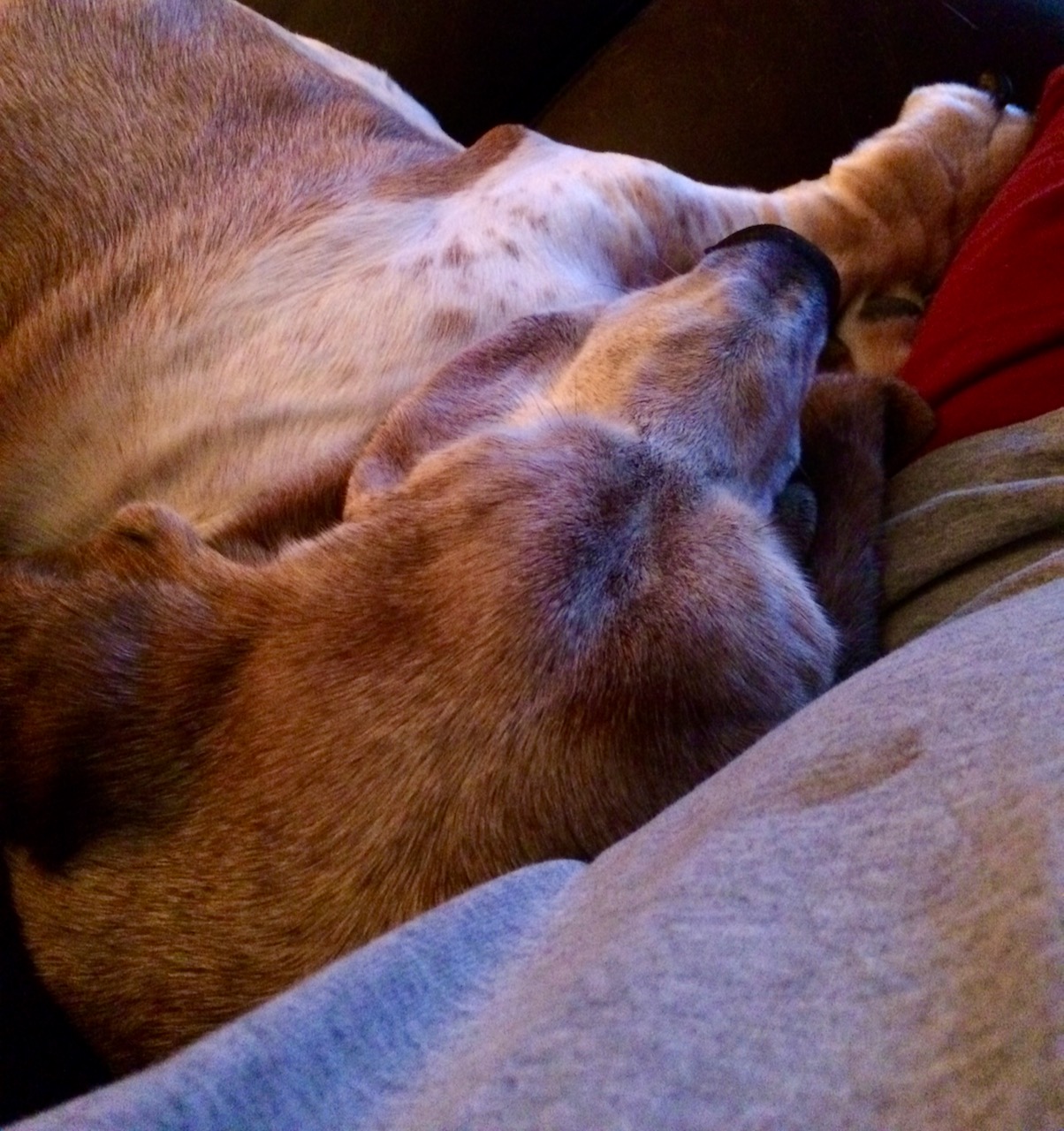 Winton enjoying the Reds game no doubt. I was a little confused by the sweatshirt and had to do a double check on the photo info to see if that was really taken in July. It was and I am still confused why I'd be wearing one. 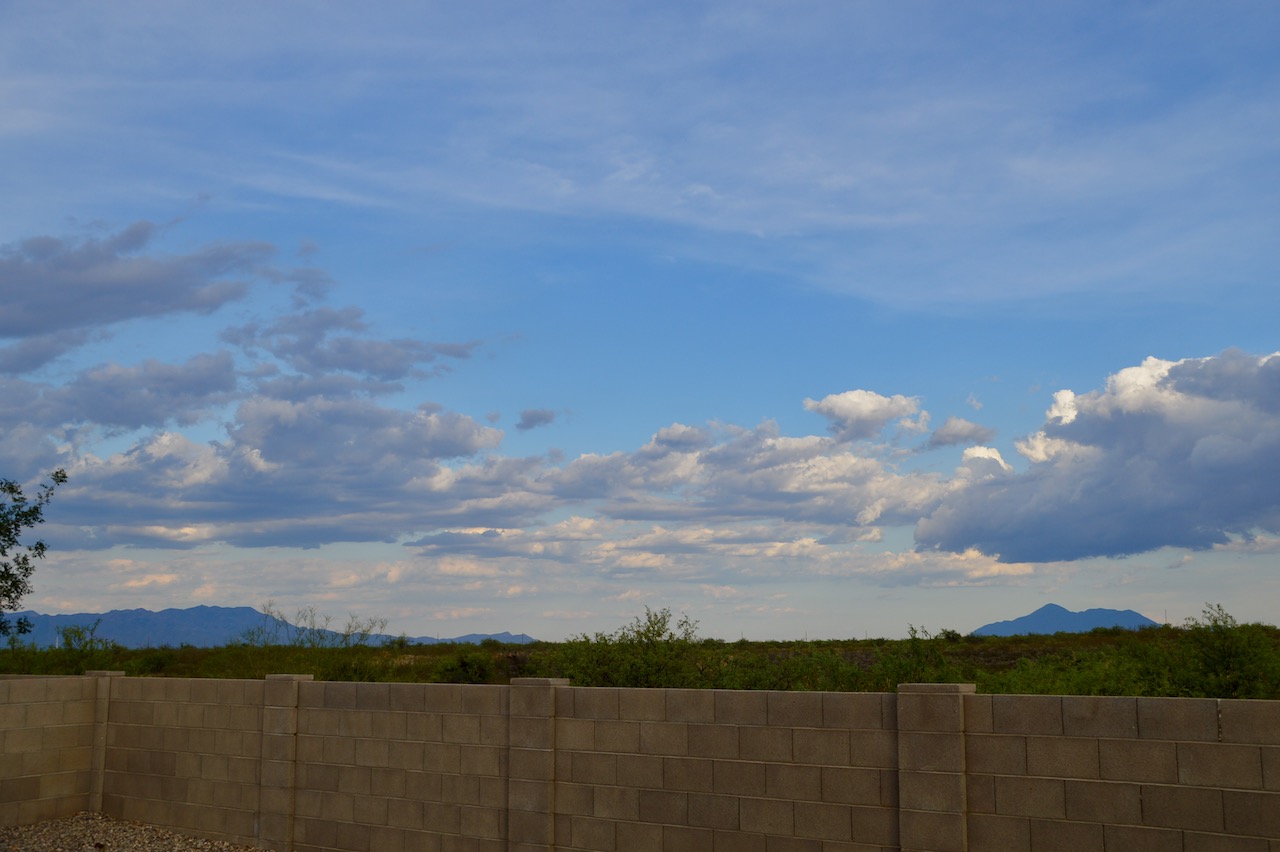 This is my current location last year, 2018. 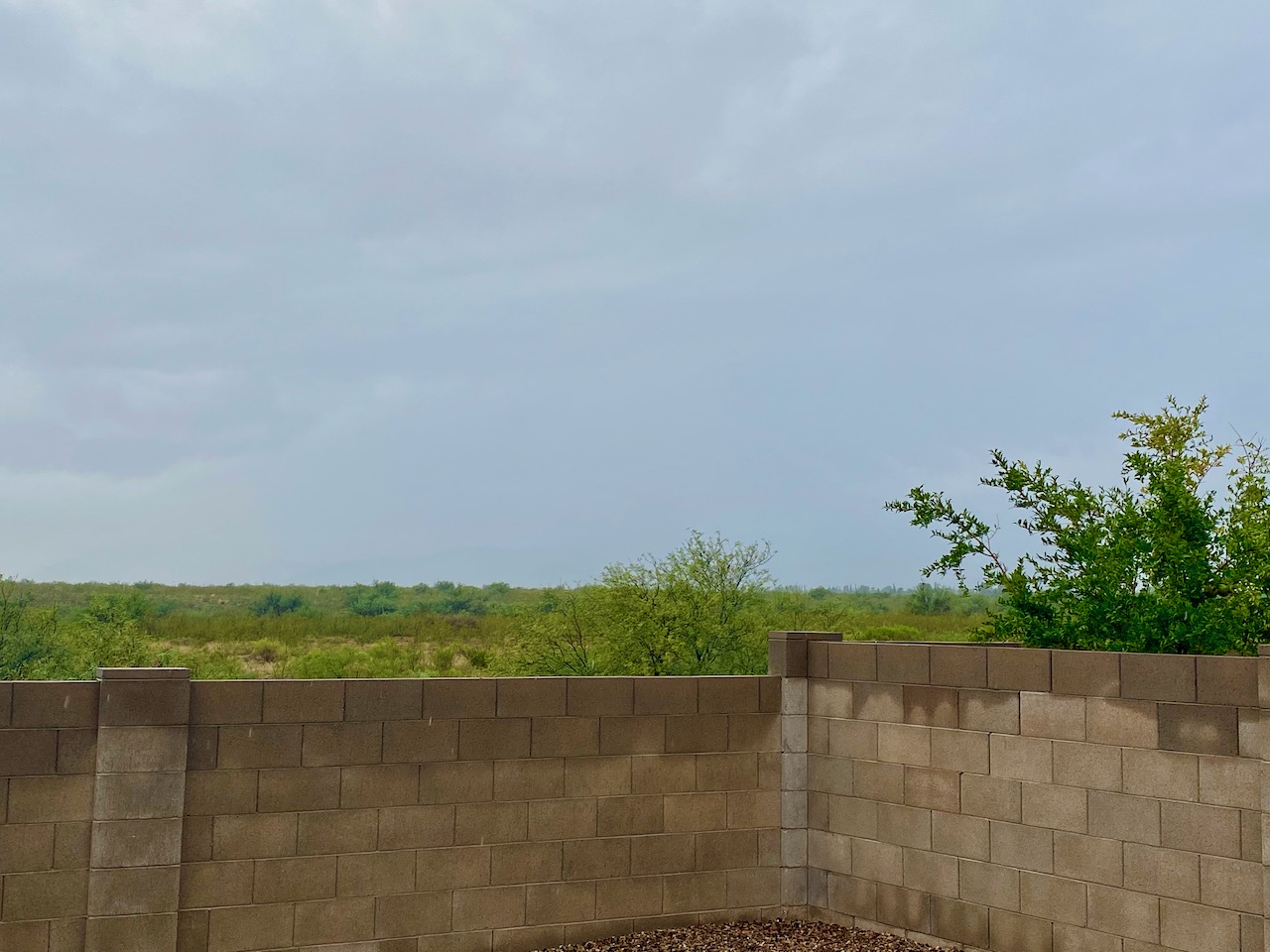 Friday morning we woke up and saw that all the mountains had disappeared over night. Rain was on the schedule within the hour and it rained and rained hard. Maybe it's the monsoons that are making me lazy and unmotived to go explore. Not sure but I've been dragging with no energy this past few days. 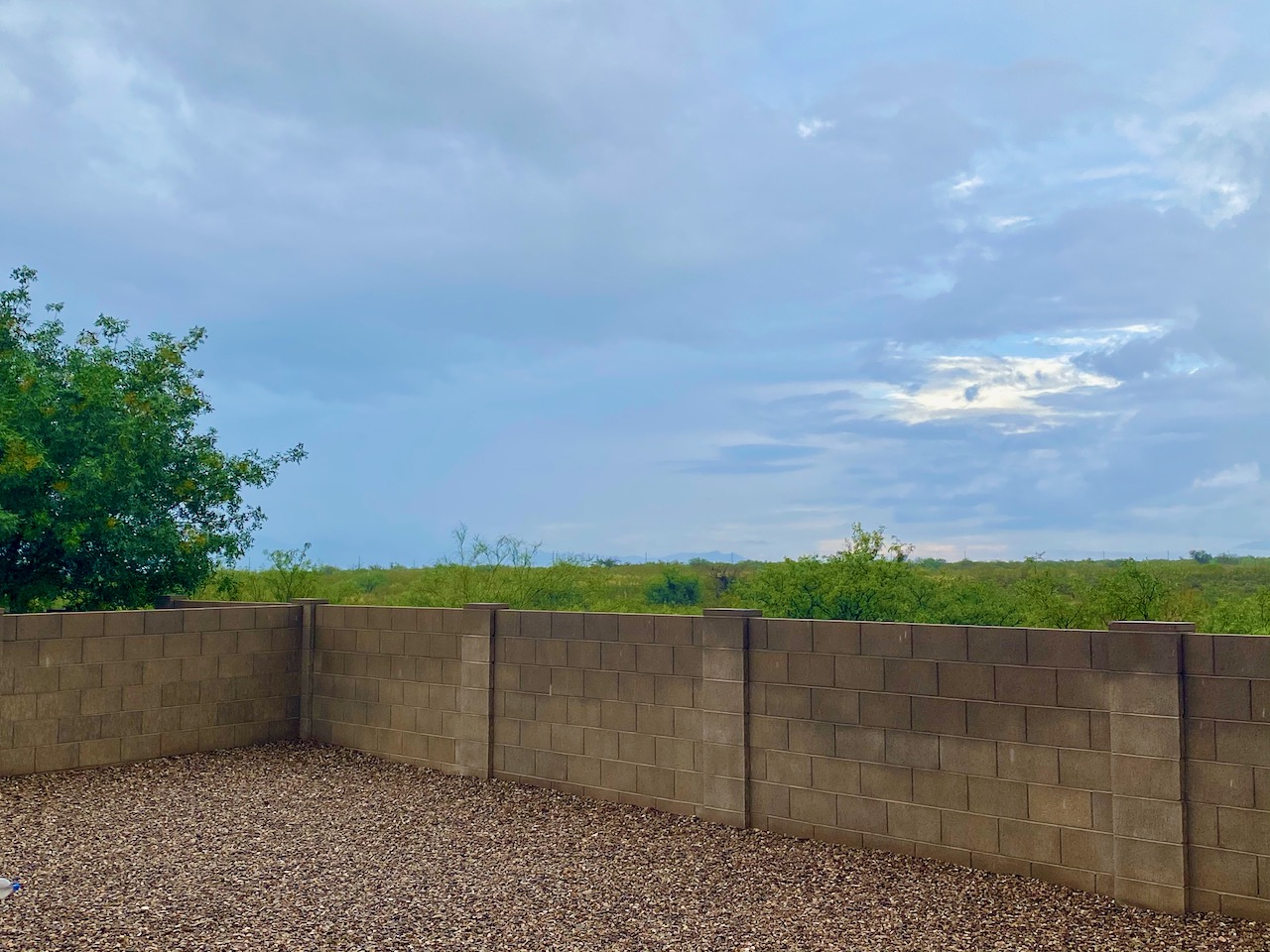 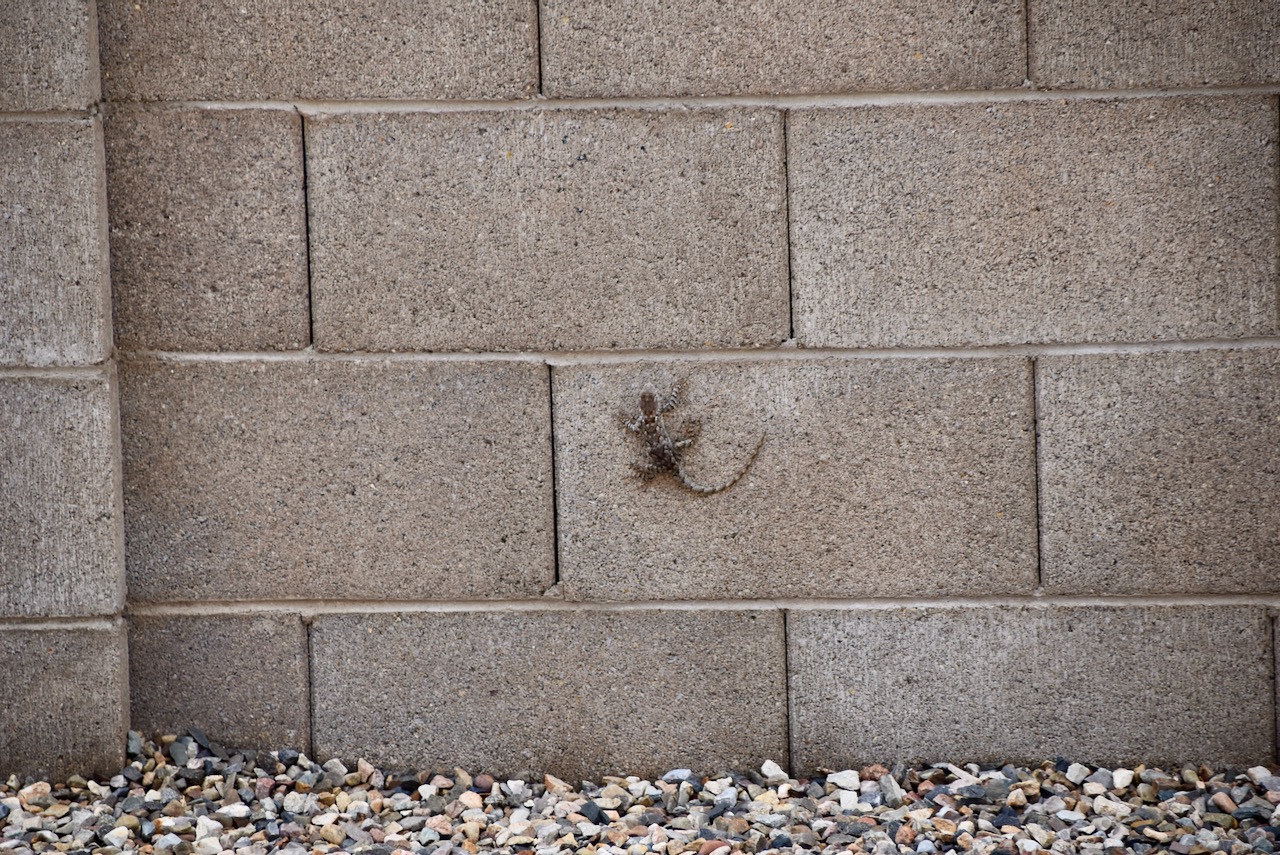 The excitement of the day yesterday was seeing this young lizzard on the back wall. Neither Walter or Stella saw it and they were standing right next to me when I took the photo. As for the lizzard we had inside the house out in view for a few days ... disappeared. Walter claims he knows nothing about that disappearance. 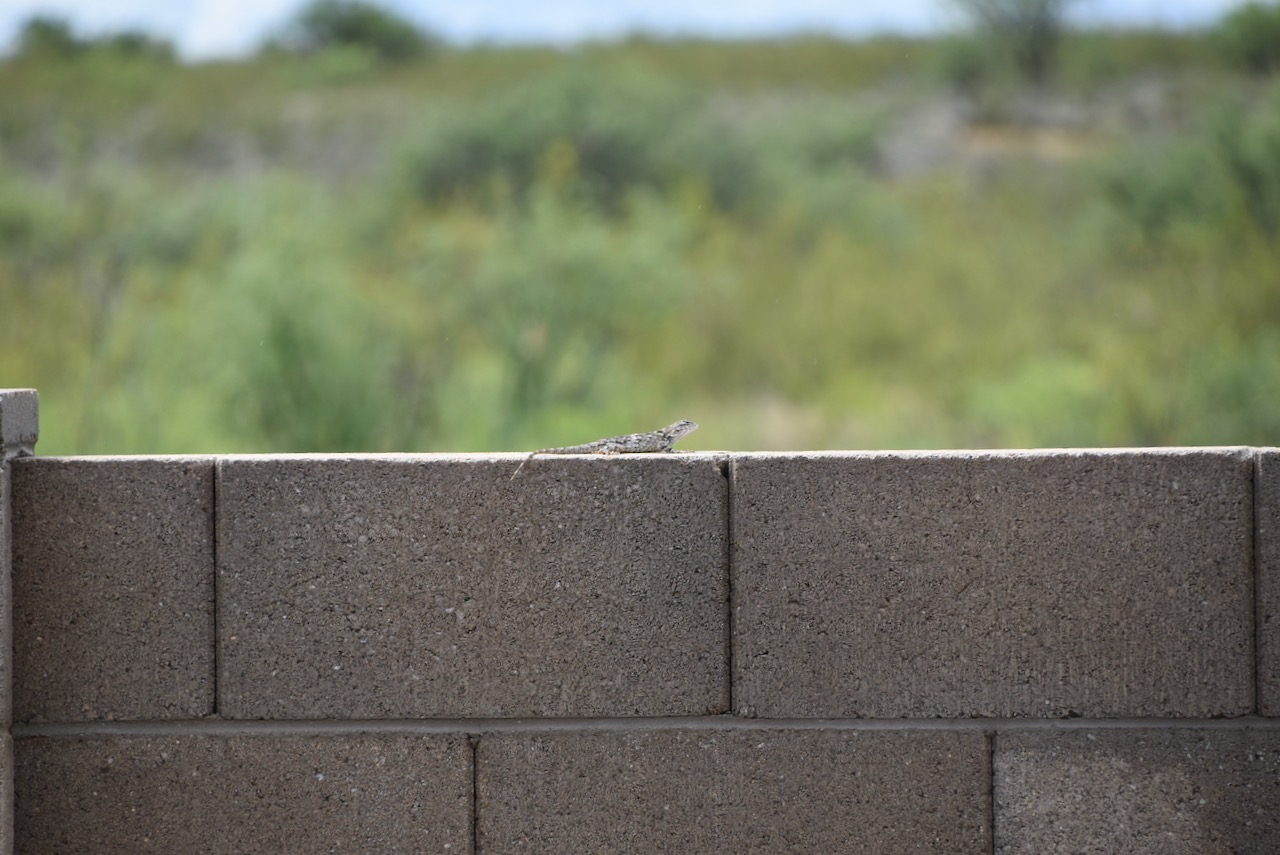 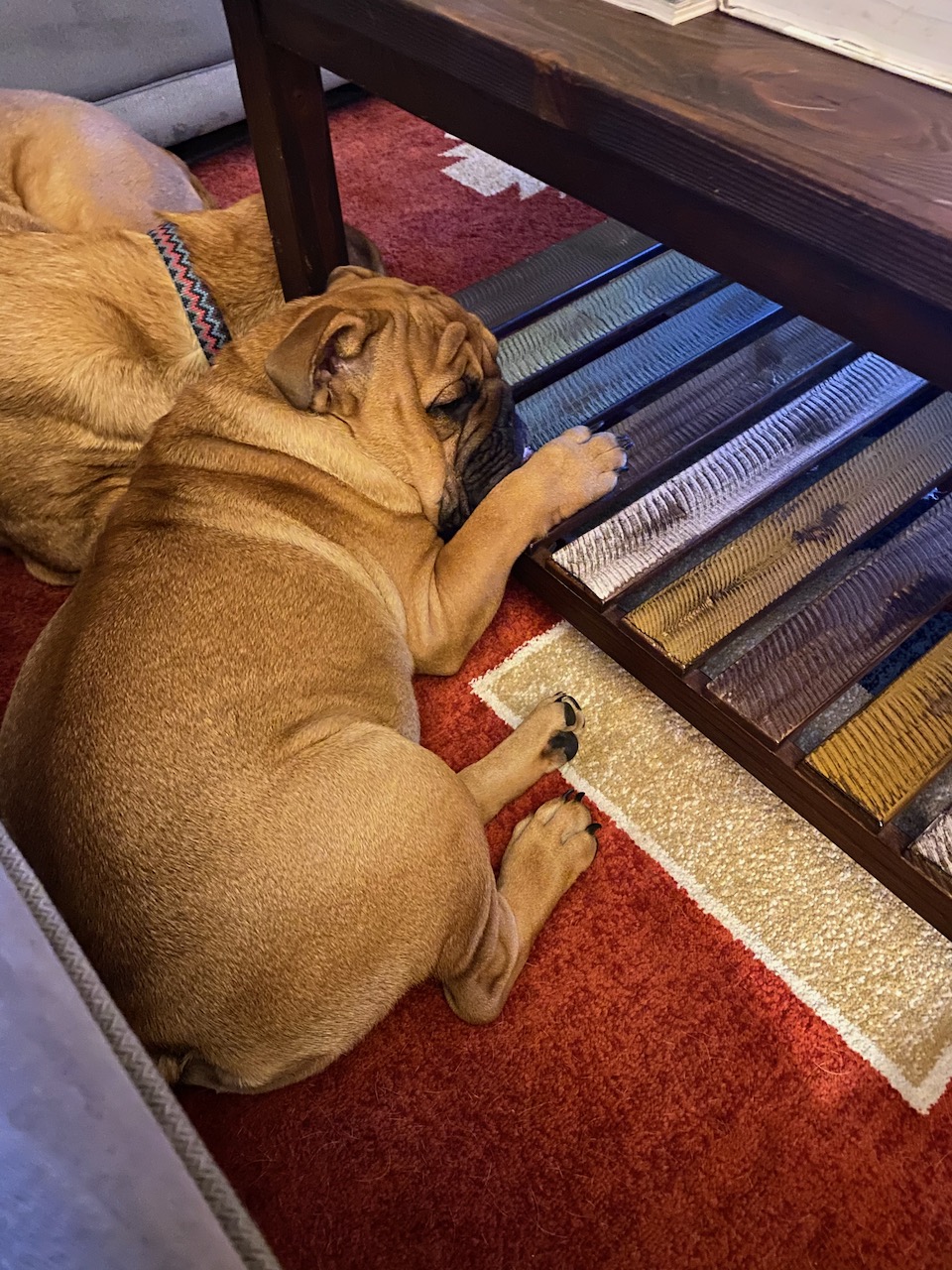 By Friday night Walter had about all the excitement he could handle for one day. He spent a lot of time growling and barking at his bones and himself during the day since Stella had declared it a day of rest and didn't want to wrestle that much. I had just sat the last bowl of kibble down on the floor to feed Heidi when I stepped outside to see this. What a way to start the day. 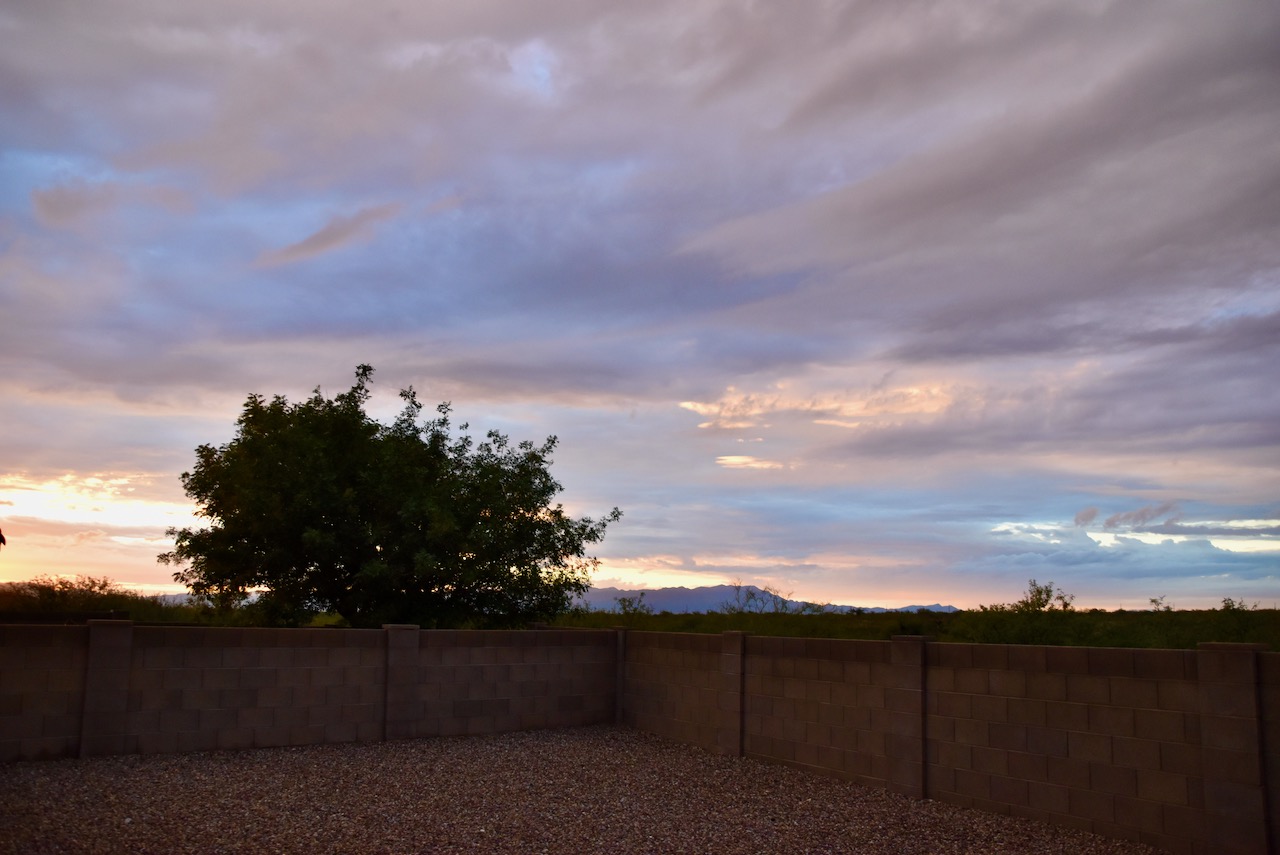 The sun was just clearing the eastern landscape towards Tombstone and Bisbee. 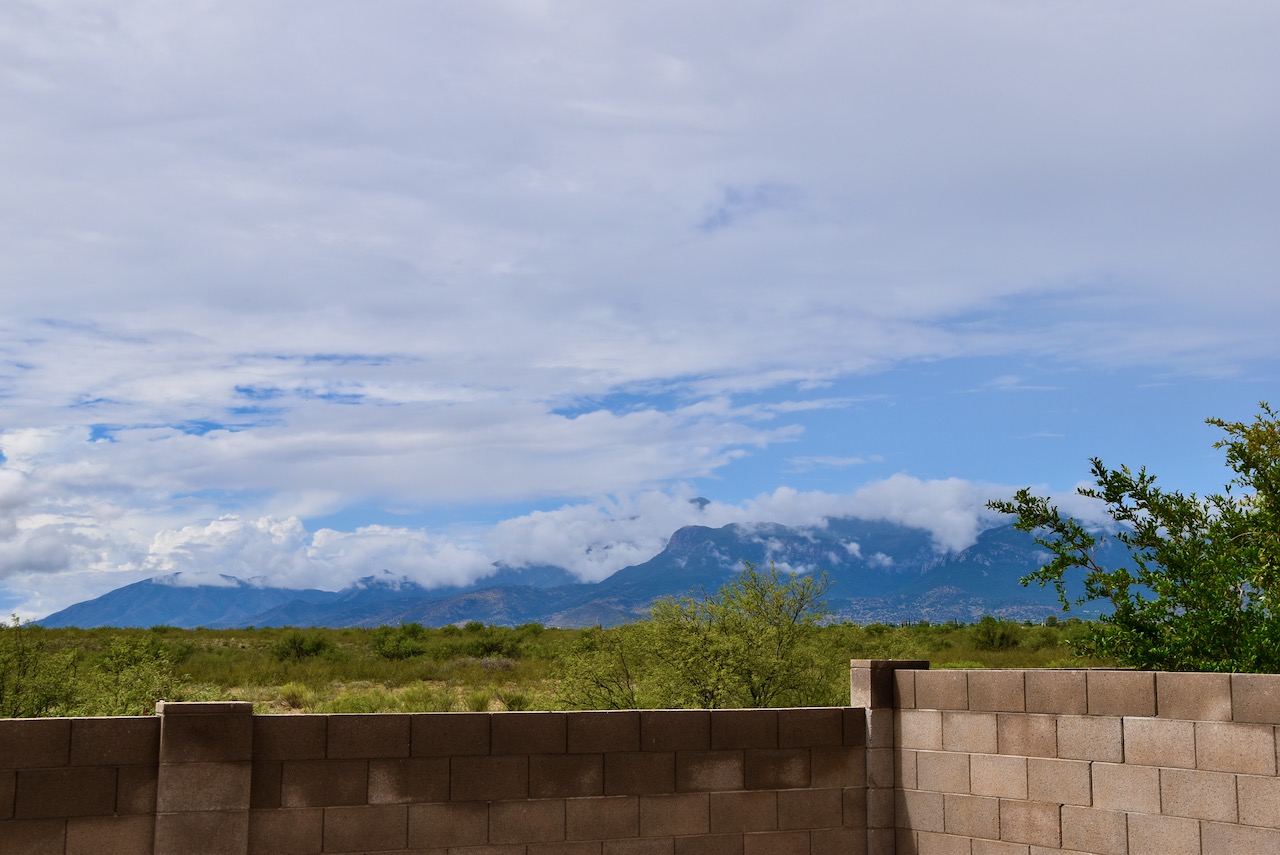 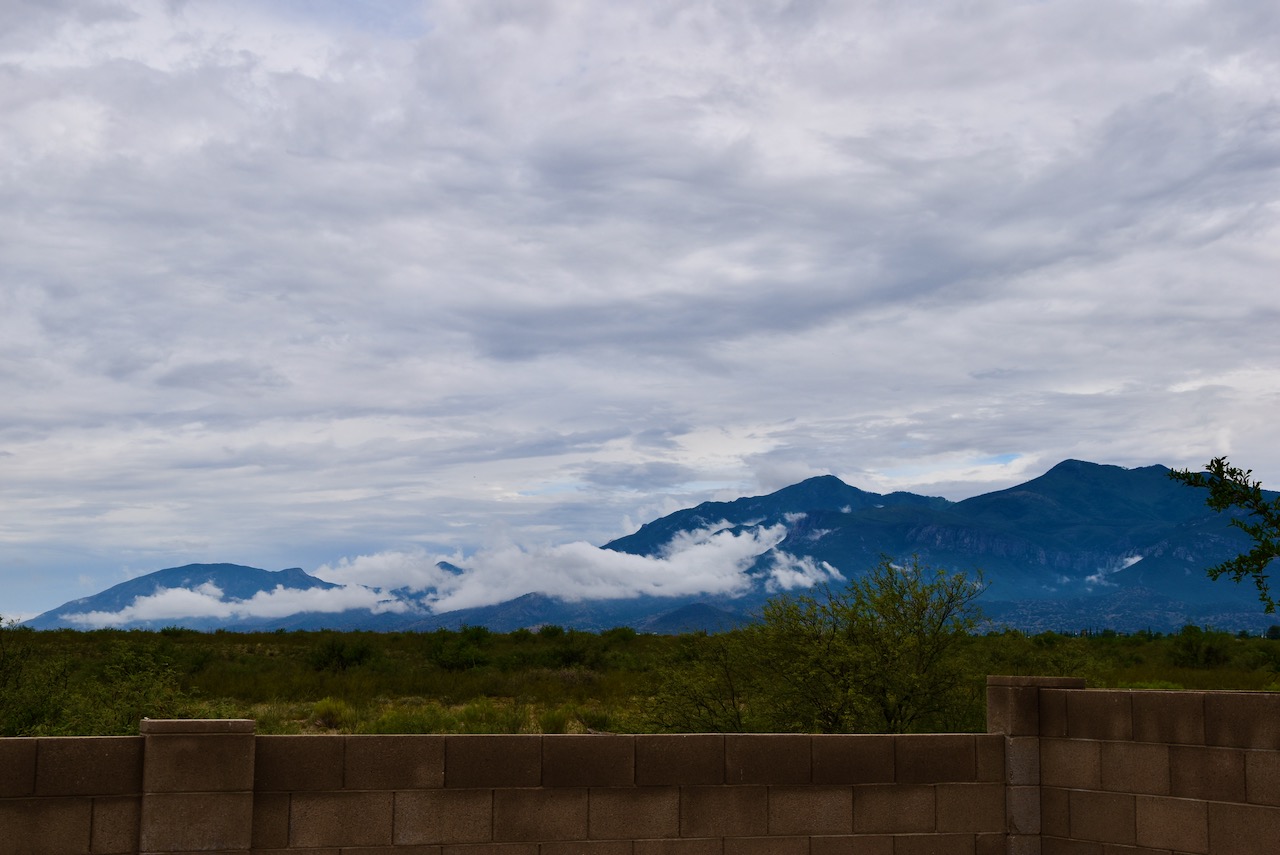 It was lightly raining as I headed north to Huachuca City to have a huge breakfast at Sunny D's. Their pancakes are as big as the plate and their biscuits and gravy are irresistible. If you are ever in that area that is the place to stop for breakfast or a good lunch. 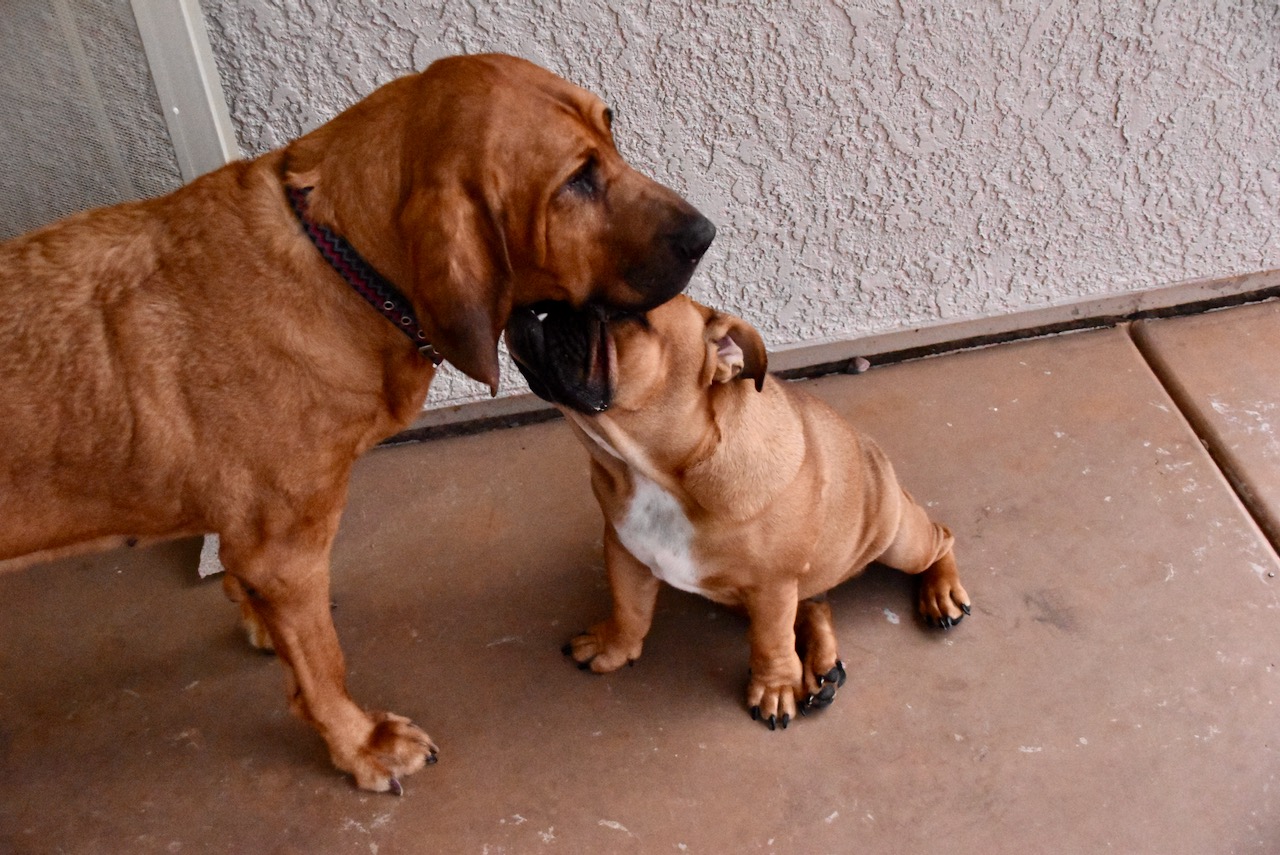 Walter tried early this morning to get Stela to play but no response. I am beginning to think a new basset puppy is just what Stella needs for some relief ... where Walter will be occupied with his new brother. We'll see what happens and that is about a month away. 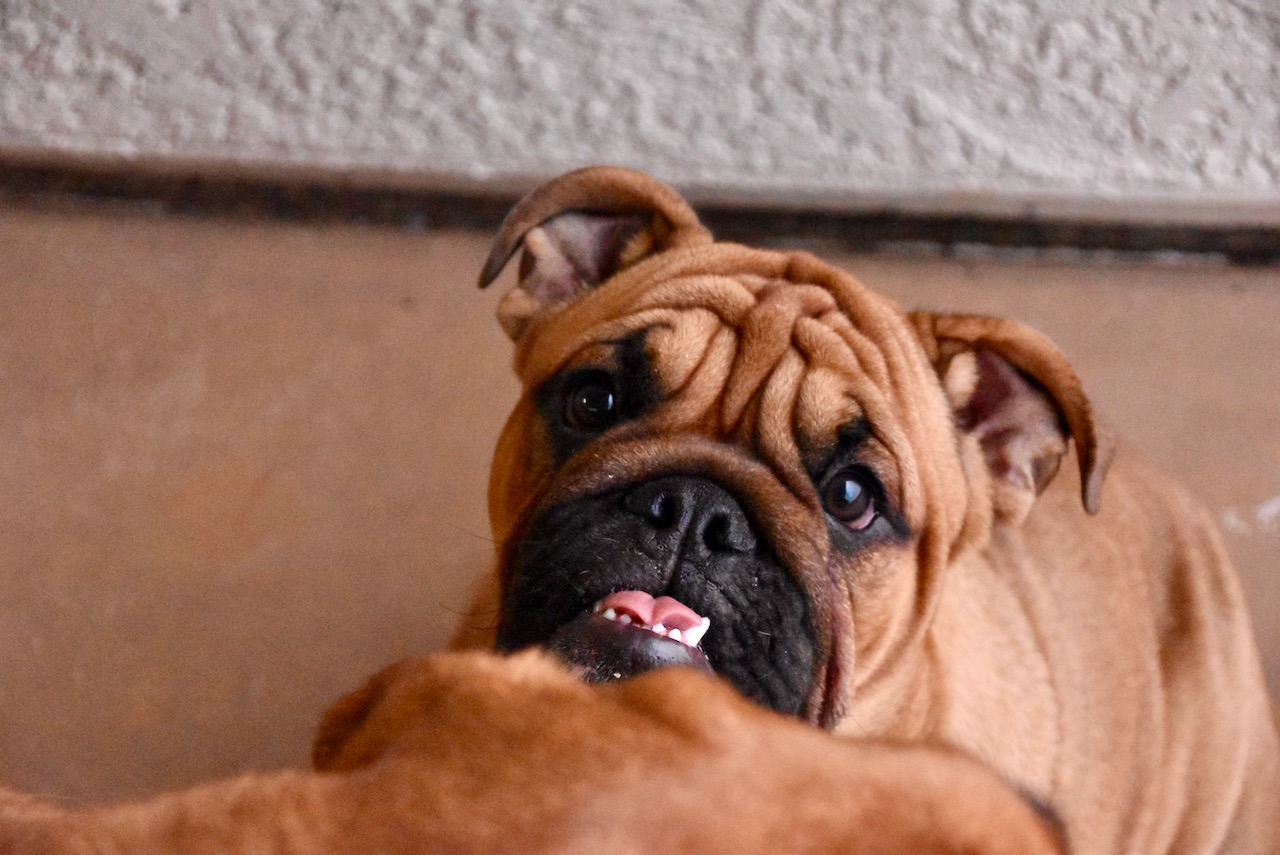 I have to admit ... he likes the camera and the attention. 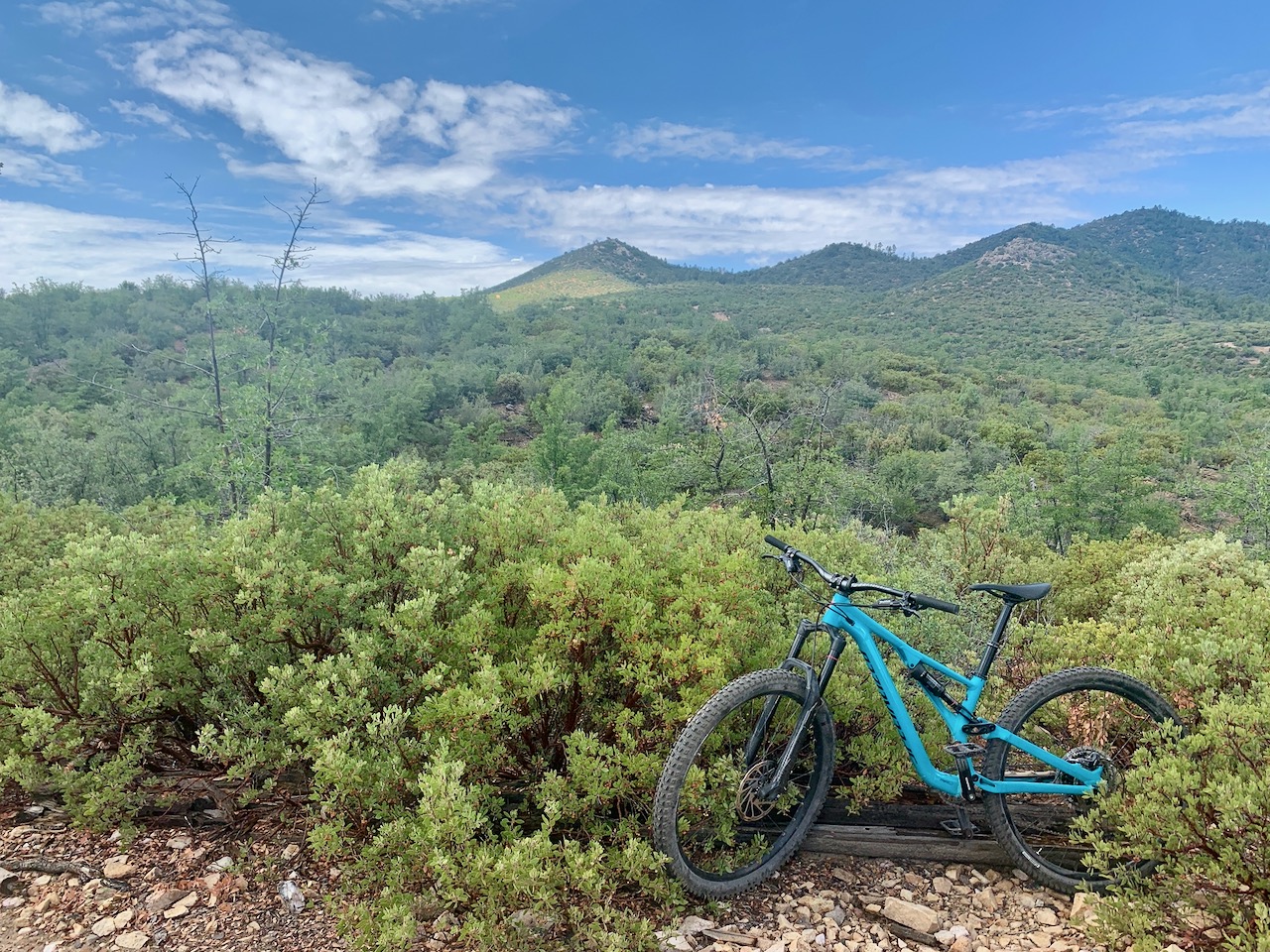 It wasn't raining up north of Phoenix. My friend sent me this photo biking on the trails outside of Prescott. She said the small town was busy with a lot of people out but nobody was wearing a mask. Why does not that surprise me. Yet, Arizona does NOT have statewide mandate, it is only determined by the mayors of each town/city.

I had a long Friday night call with my old friend back in Indiana. We each had similar virus stories. Basically people don't follow what they are told to do and then the virus spreads. He too was feeling low engery when it comes to riding the bike but seems more interested in little projects that he has not finished around the house. Of course the muggy humid midwest puts him in a different environment when doing those small projects.

My diversion started yesterday afternoon as I tuned into the first Reds game on tv. That was followed up by the Arizona - San Diego game afterward but by that time I had watched enough baseball. It's a strange game to watch with nobody in the stands. Even that disrupts businesses, vendors and people that work at the games. I read where College and Pro football hopes to have a policy of 25% of the seats filled for their games this fall, if they even play. Baseball will give them a lot of good data on if that process of playing games is going to work.

The highlight of my day today, besides that breakfast ... vacuuming. I love to vacuum and have just enough carpet and the living room rug to keep me occupied. Walter shows no sign of fear as I run the Dyson to pick up all of Stella's dog hair. It's late Saturday afternoon and all the dogs are passed out after their afternoon kibble.

I am going to see if I can find a online source to watch the Reds game for free. Otherwise I'll head out to the patio and enjoy the 85° weather. 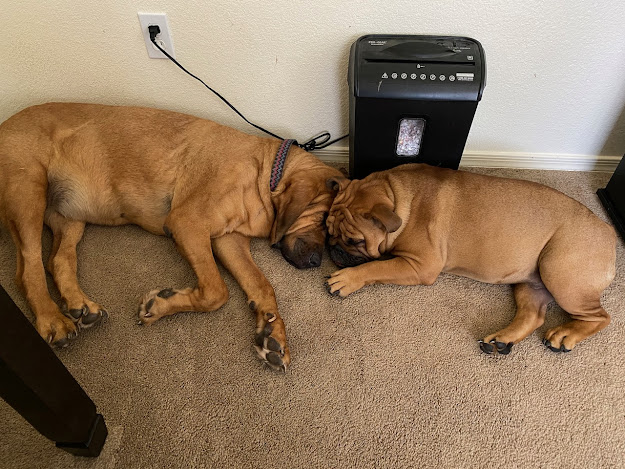