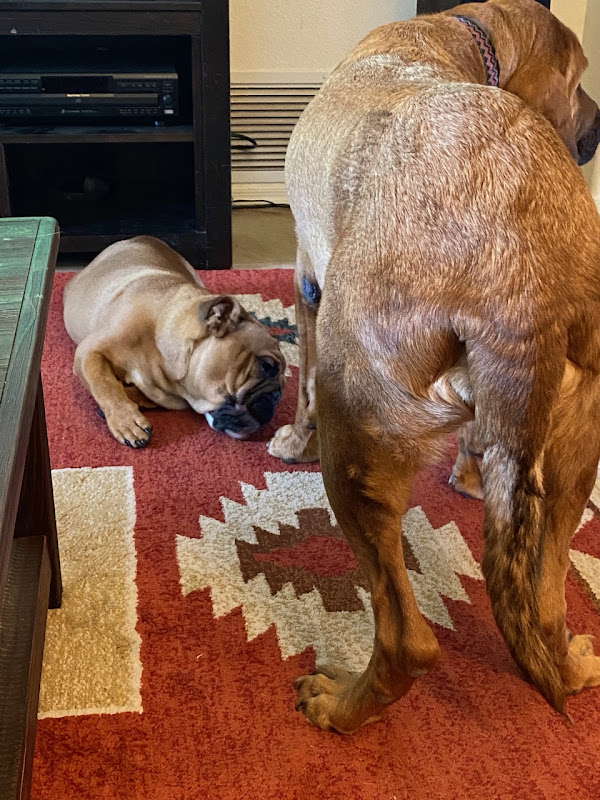 Walter got a little overconfident tonight while I was watching the Reds game. He had a cow hoof and started tormenting a sleeping Stella by laying the hoof on her foot then picking it up when she woke up and raised her head. This went to for a while until Stella decided she might be able to get that favorite toy of hers if she stood up. Of course Stella had not chewed any bone, antler or hoof for years ... until Walter showed up. So Walter kept dropping it on her foot, then picking it up when Stella reached for it. I think you will like some of Walter's expressions in these photos. 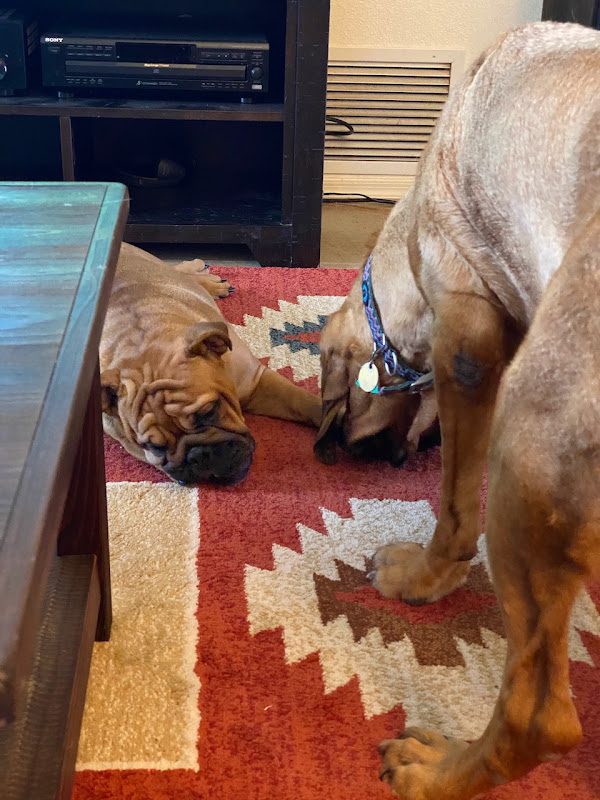 A fine example of bulldog puppy quickness, not only picked it off of Stella's nose but was able to move it out of reach inside his mouth. 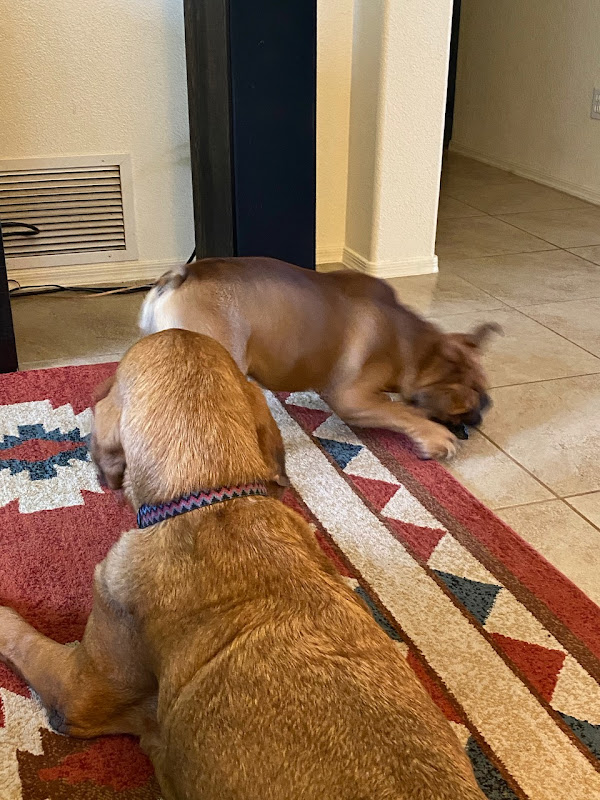 Walter swung his head so hard to keep the hoof away from Stella that he lost control of it as it slid across the tile floor. Stella didn't move ... she had a plan. 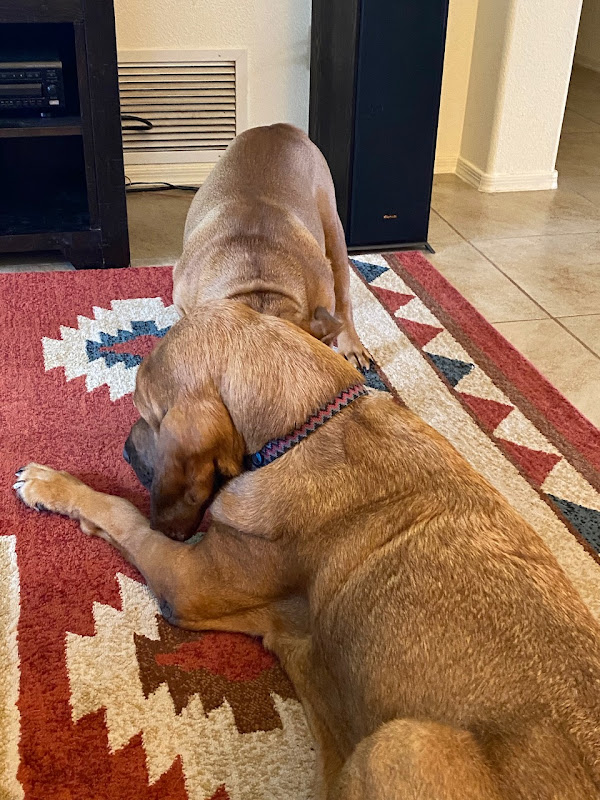 Much like a batter waiting for his pitch to knock the ball out of the park, Stella waited for her move. She had observed Walter's overconfidence and knew when in a split second she could steal the hoof. 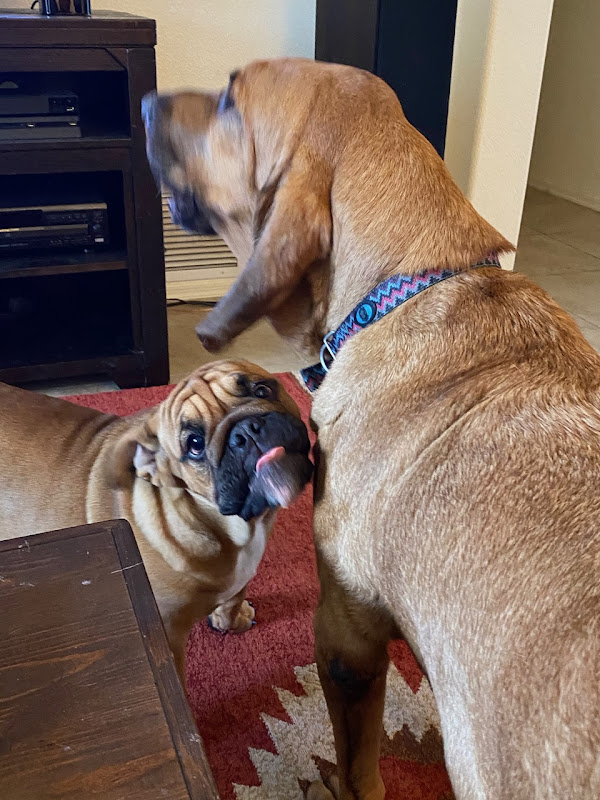 Just as Stella raised her head, moving the hoof that is too small for her to chew, to the back of her mouth where her strongest teeth are ... Walter seems to be looking at me for some help, maybe I could come to the rescue and take it from Stella and give it back to him. I just sat on the watch watching the "hoof game" as well as the Reds game. 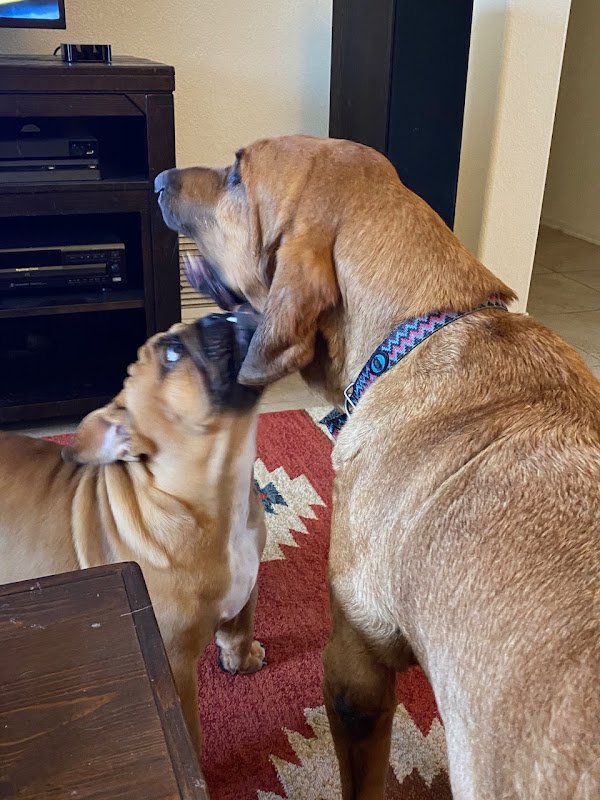 So it was Stella's turn to torment Walter. She would lay her mouth on top of Walter's face or head while she chewed the hoof. Walter was now on the offense determined to get his hoof back. 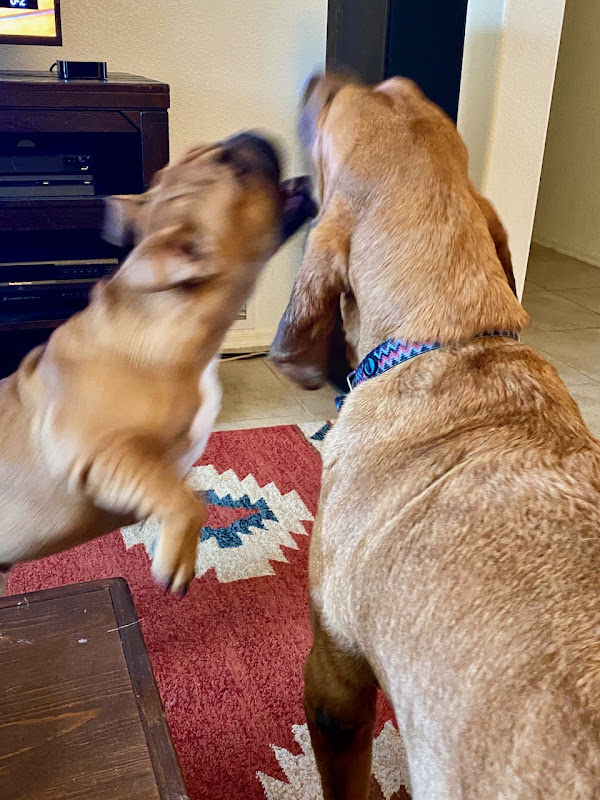 A gallant effort using his jumping ability, bulldog quickness and body control. Stella would just raise her mouth a little higher just out of reach of the leaping bulldog puppy. 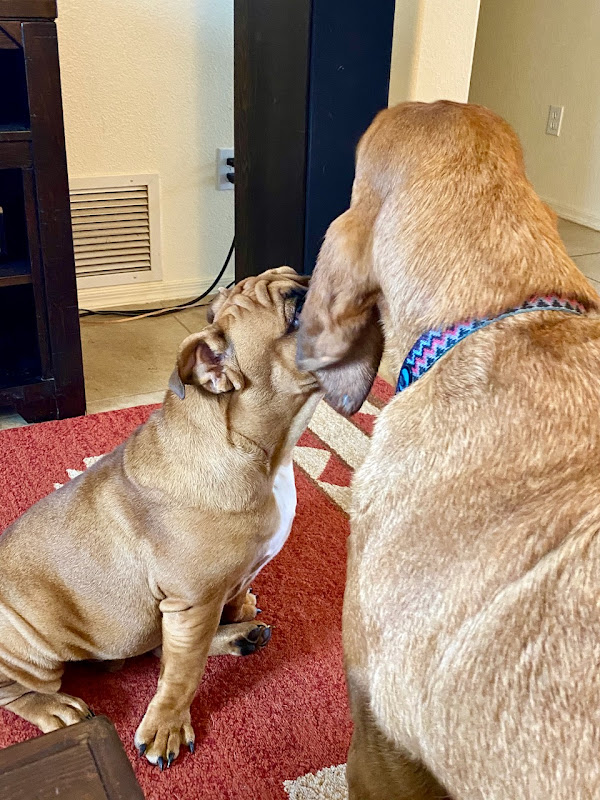 They stopped like Sadie and Stella use to, for thinking and analyzing what the next move would be of their opponent. I could still hear Stella's teeth mashing the hoof in back of her mouth. Her jaws are strong enough that she can break these hooves into pieces depending what the brand name is. When that happens, all those pieces are thrown in the trash. 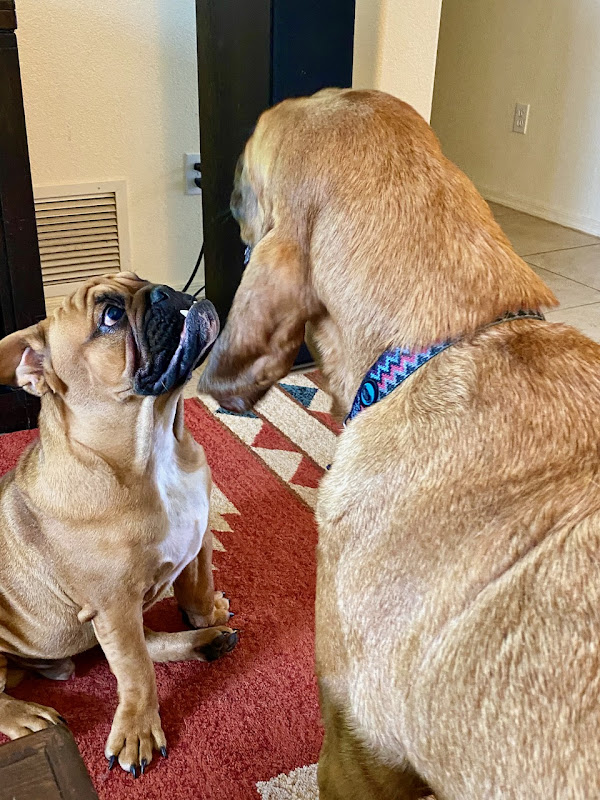 Is that a little begging I see from Walter? The pup that is always in control and running the show. 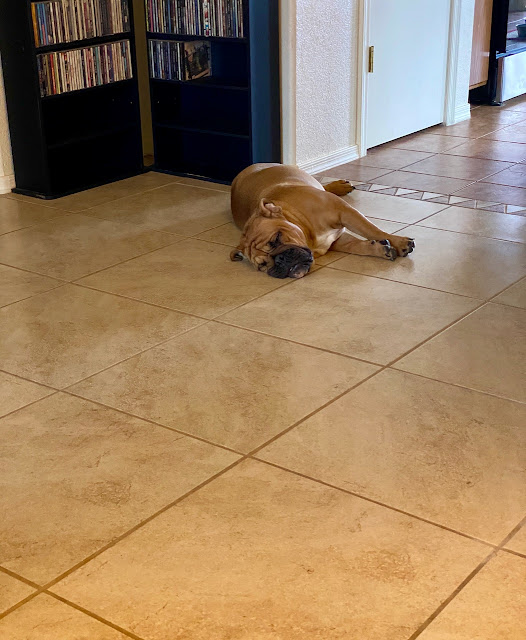 After Stella let him know he wasn't getting the cow hoof back, Walter walked slowly toward the kitchen, turned to take one last look at Stella and literally plopped down on the cold tile and was out within seconds. He never just lays down anywhere ... he just falls into the spot he wants to sleep.
I was back on my bike this morning early for as short easy 20 mile ride with a route that is fairly flat but really nothing is flat around here when it comes to bicycling. It was good to get back riding. I have gained some weight from not riding. My pulse rate was much higher of course with this easy pace ride. That will go down the more miles I get under me. I returned a little before 9am and that 87° felt like a 100°. So the plan for tomorrow is to leave around 6:15am, an hour earlier than this morning.
Nothing much after that. A load of laundry and then three hours in different calls with Directv in my attempt to get my payment for MLB Extra Innings refunded back to me as per their letter April 24th. I finally found someone that understand what I was asking and that MLB Extra Innings was NOT a *&#($&*@ MOVIE !!!!! I have never been a fan of outsourced customer service half way around the world.
By that time it was time for baseball and a nice fresh skinless chicken breast I bought at the butcher counter instead of the packaged chicken I normally buy. So much more taste in those meats, chicken, shrimp and salmon from the meat counter wrapped fresh instead of packaged.
Heidi was very active today but I didn't get any photos. It's always good to see her running around the house or laying outside and enjoying the sun and heat.
A light short rain late this afternoon here in the "Wild West" ... unexpected showers.
I see that Blogger is still making changes to their new version. It's an entirely different process adding more than one label. When I checked the photo sizes via the HTML screen I saw there was no way of changing that size from s600 to s1600 because all the photos were automatically loaded at s1280. So you should see some sharper images on any blogs you read that are on the Blogger platform. They will eventually get it sorted out but I swear not one of those programmers have a blog on blogger, or anywhere for that matter.
at July 31, 2020