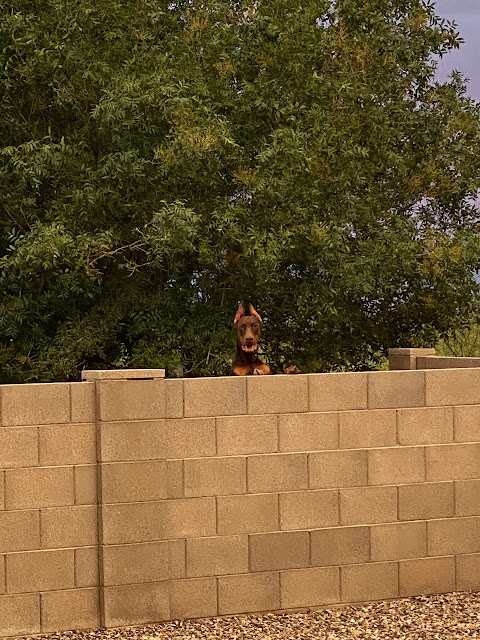 Sunday afternoon I heard a familiar dog barking. They leave their lab and doberman puppy in their backyard when they are gone. This is Diesel, same age as Walter and Walter's best friend besides Stella. We let them get together sometimes in their yard to play when their kids want Walter "to come over". 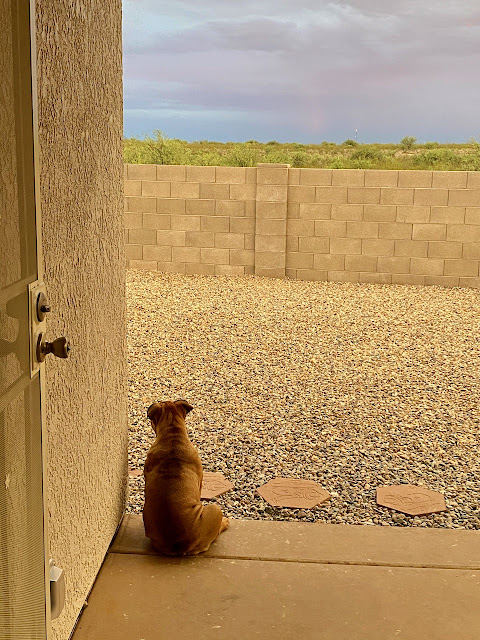 Only Walter wasn't in the mood for any talking or playing. He sat hidden on the patio just barely glancing around the corner at his friend. I couldn't help but notice the fantastic sky show going on so I went outside to take some photos. 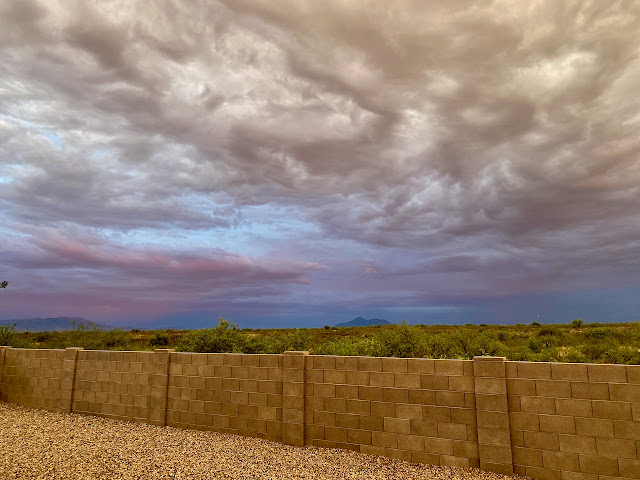 Mule mountains to the left, mountain in Mexico and I can't ever remember the name of it. 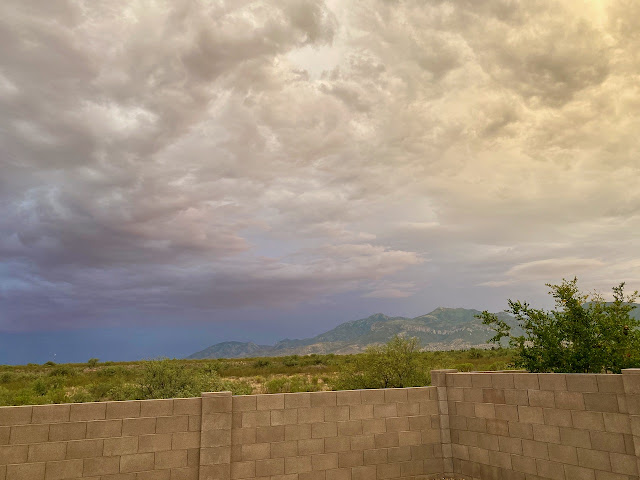 Coronado NF to the left, Miller Peak and Carr Peak in that order. With all of that sky activity you would have thought rain was seconds away but not a drop here. 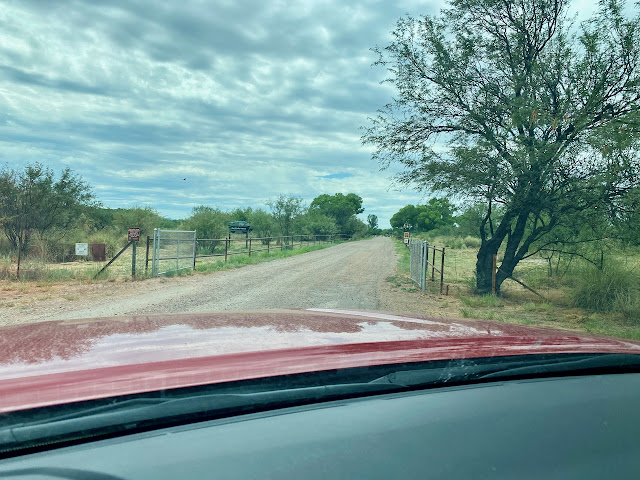 This morning I knew I was going to have to get out of the house and do something to keep my sanity. That announcement I posted on last nights blog was a little confusing to me. By the title it sounded as if the whole park was closed yet I knew the fire was stopped on the other side of the highway of the San Pedro River house. I had also seen the past few weeks from comments made by mountain bikers on the Cochise Cycling group that Brown Canyon was closed but that didn't seem right either ... so this morning I headed out to the San Pedro House, then Brown Canyon and Miller Canyon to see if any of them were closed.

Any photos you see with my truck in the road, I have stopped the vehicle before taking the photos. 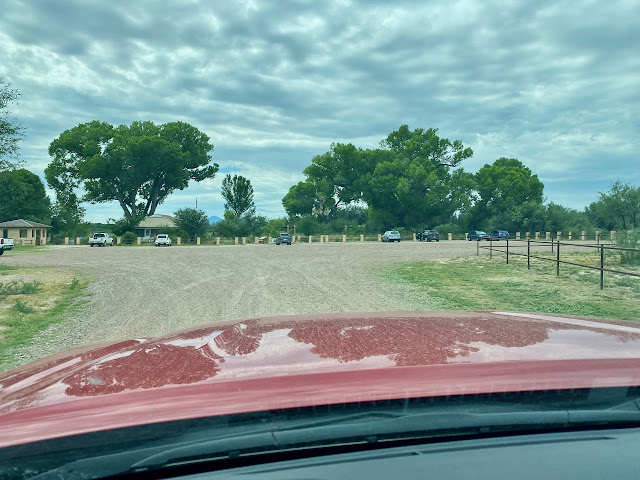 The photo above this one was the entrance to the San Pedro House which includes many different hiking trails and some that parallel the river. High on the hill on the highway I saw nothing but green trees and green fields on the south side of the road. So why wouldn't that part of the park be open. As I pulled into the parking lot I thought about taking a short hike over to the river but realized I had forgotten the most important thing. I had my camera but forgot my water and at least one trekking pole. 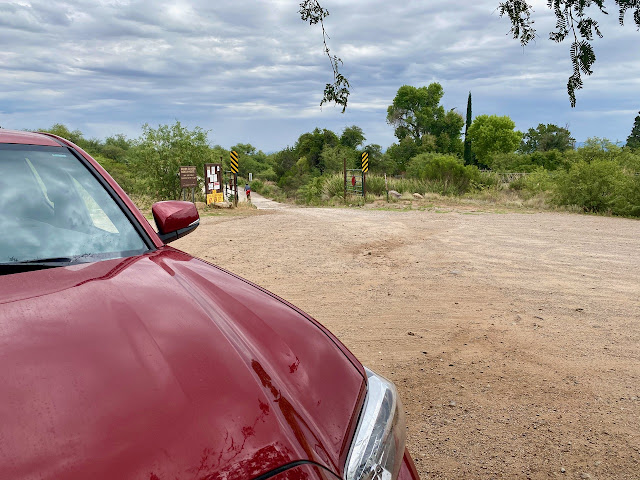 From there I headed out to Ramsey Canyon Rd, the one I bike up when I ride, to Brown Canyon and saw three forest ranger trucks in the parking lot, and an open gate. Did they just decide to open Brown Canyon??? Due to my covid laziness I didn't drive the two miles to the house, nor did I park here for free and walk the two miles to the Brown Canyon Ranch House. I turned around and headed south once I got back to the highway ... to Miller Canyon. 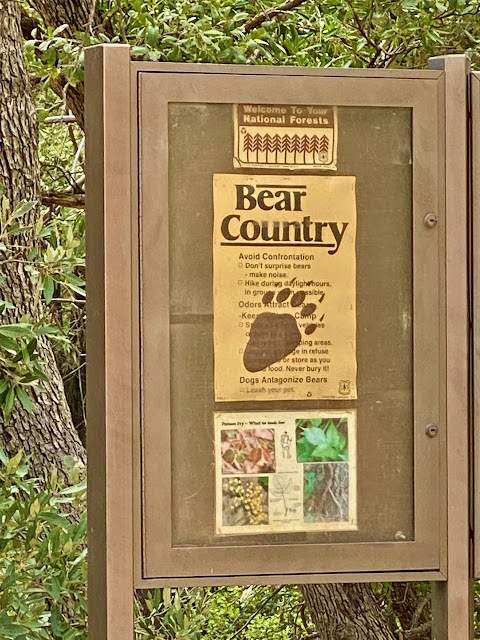 Just one reason that I don't bring the hounds and Walter with me on my trips. The other is, it's hot and if I found some place I wanted to explore it would be too hot even with the windows partially opened to leave them in the FJ or truck. Plus Heidi prefers her air conditioning and doesn't like the rocky bouncy roads we encounter at times. Stella always sleeps most of the trips and Walter is an unknown. 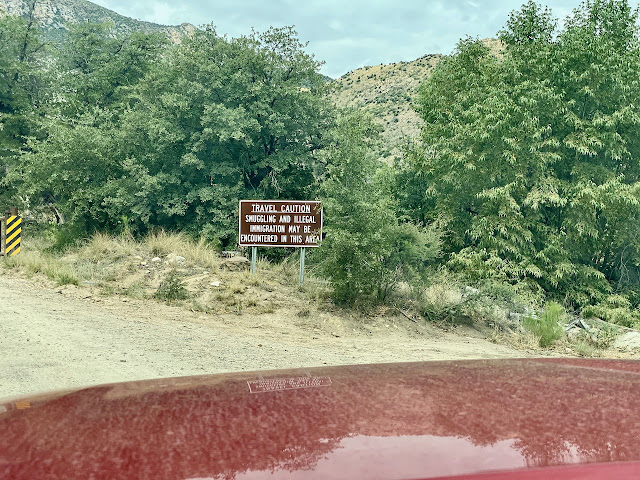 This sign is common here and as I go up Montezuma Pass in the Coronado NF. Miller Canyon though is not a bad drive. Not quite two miles to the top where it dead ends. I made it today in 2WD in my truck. People are not out though like you would see under normal conditions. I did not see one person bicycling in areas that I ride, and only saw 3 hikers finishing their trek as I pulled into the lower parking lot. 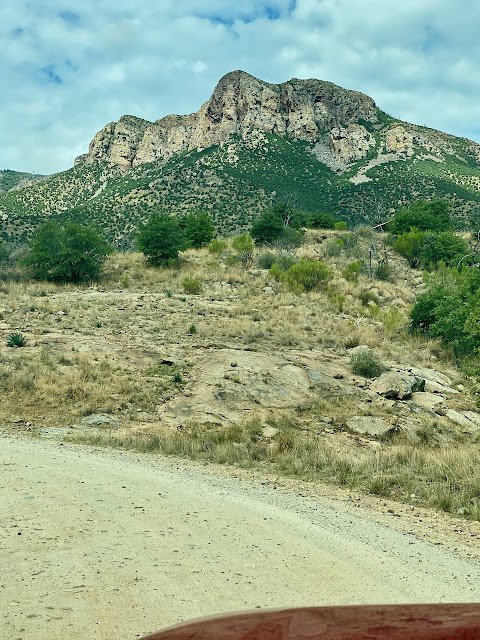 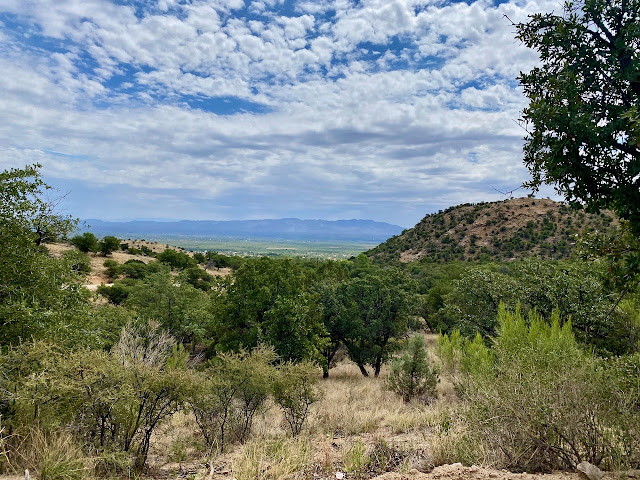 That view never gets old. 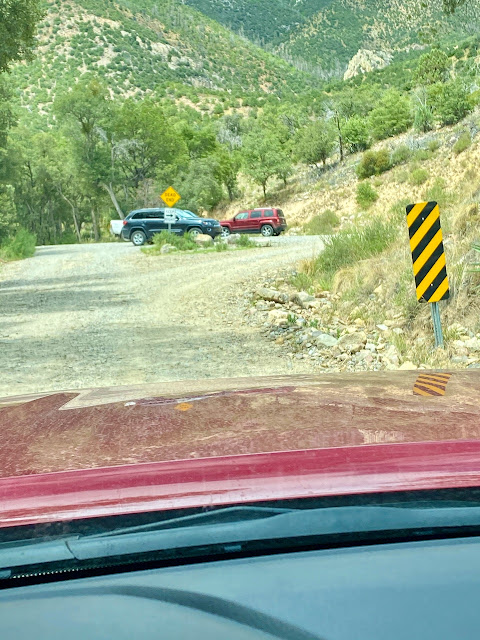 The last time I was up here, there were so many cars and trucks parked that not only were there no spaces available but they stretched out into that road where I could barely get by to come back down the mountain. Not today though ... only five cars were parked and even more spaces available. 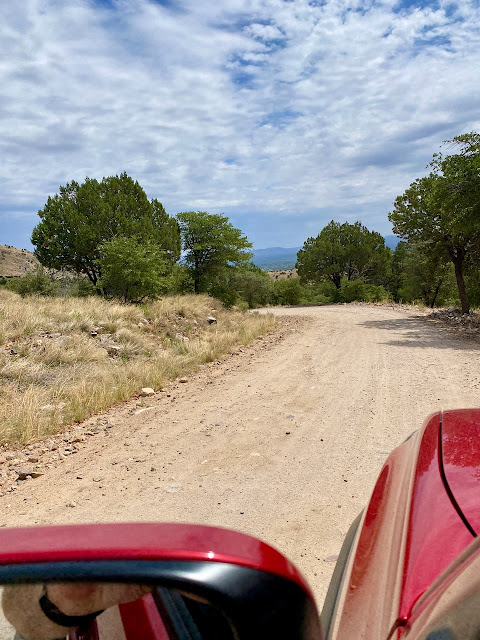 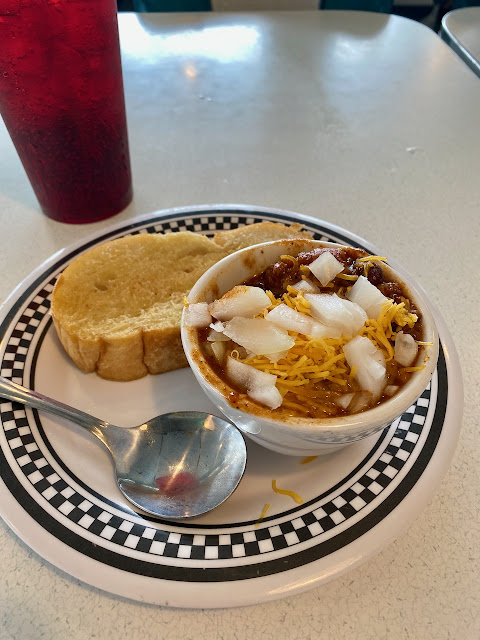 I had been wanting to stop at The Diner for lunch. The last time I tried they had one waitress that was way behind where me and another couple waited and waited to be seated. I turned and left. But today a little past 11am I was escorted to my seat, order taken immediately and the hottest chili this side of the Rocky Mts was put in front of me. That small cup with make you sweat under your eyeballs and beg for anything to drink. I ordered it every time I stop in. 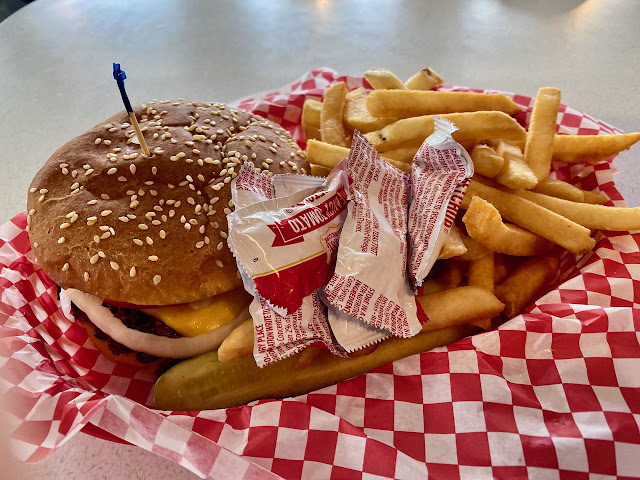 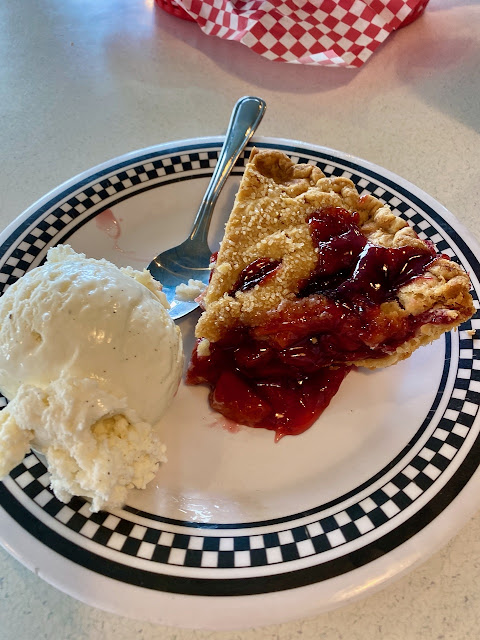 This was not as good as the first time I had it ... not the taste of it ... the size. I had a bigger piece of pie and two scoops of ice cream on top of the pie. Today it came this way but it was as good as always. Sometimes the body needs fuel and I was tired of walking around all day hungry and not seeing good enough results on the scales. There might be a tab of Tums later and/or a siesta but that will be worth it. 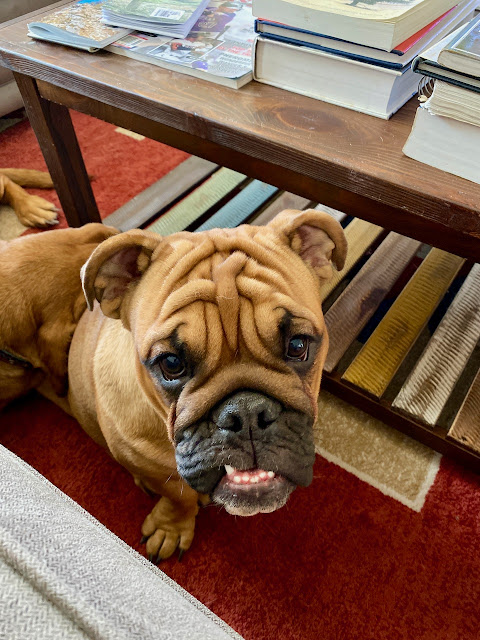 Walter was on fire this morning after he was fed. No photos are here for proof so you will just have to believe these next few stories. When I am at my computer having my first cups of coffee of the day I can usually tell where he is by the certain kind of noises I am hearing. The first one I heard was nothing I had heard before. I LOUD explosive type of sound that came from the kitchen. I walk out quietly and peek around the corner to see what he is doing.

Evidently he wanted more food. He had stood up with his front paws on the locked dog food container and tipped it over onto the tile floor. By the time I caught him he was staring at the container with his left front paw raised up on the edge of the locked lid. When he saw me, he walked over to me like nothing was going on.  :)

The only way to keep Stella and Walter from destroying my vertical blinds, my living room rug or anything in the bedroom is to crate both of them when I am gone. I have tried other options in their favor before this last resort. Long story short ... I have no other choice. I also have to use small Binks padlock on both crates or they can get out ... how do I know that ... because they have when not locked properly.

So this morning I hear a familiar sound of Walter playing inside the crates because they have the hard plastic floor. A lot of times I catch him running in and out of either crate either taking his bone in or taking his bones out before barking at them. Today I got up to see if he had accidentally shut himself in one because of the sounds I was hearing. He was standing out in front of them looking at me with the guiltiest face you could imagine. Right off the bat I saw the three padlocks I leave hanging unlocked on the top edge of Stella's crate were gone!!!

Nothing on the floor ... except one key, that is kept in the lock. So I get on my hands and knees to look under the bed ... nothing, look under the pad that Stella's crate sits on, ONE key and a padlock in different locations. So now I am looking for one more key and two more padlocks. I stand and shake out the two blankets of Heidis ... one padlock drops to the floor. Back on my hands and knees and I see the last key under the rubber pad that Stella's crate sits on just like before only this time it's on the back corner almost 4' away. So I am down to one last padlock and I can't see it anywhere.

I stand look around ... nothing ... I check the bathroom floor and shower, under Heidi's bed, under my bed again .... nothing. The only thing I have not checked is the sleeping bag in a pile by the chest of drawers. I lift the bag to see what falls out if anything ... there it is ... the last padlock.

Hours later after I get home I hear a noise I've never heard from Walter. It's his toenails sliding down the bathroom cabinet as he drags my tube of toothpaste off the counter.