Was It Really Saturday ? 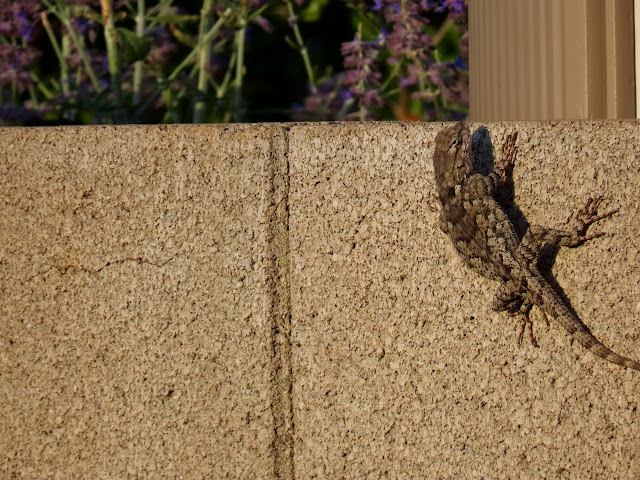 {This did not post as scheduled ... guess Blogger has more work to do}
I don't see them often but when I do they are climbing the fence to get back to their hiding place in my neighbors yard, probably behind his small shed. Will the one that I showed you yesterday on my shower curtain grow into this size?  LOL I am not sure what any of the three dogs would do if they were to find one on the ground. I had some plans for today, did some not others. As usual my days come and go with the flow. 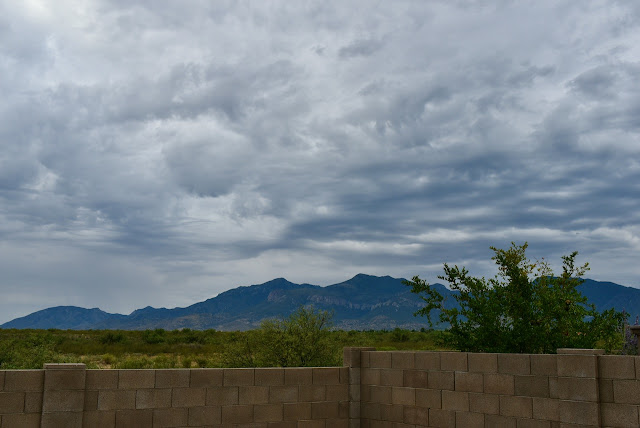 I like sleeping with the bedroom window open during the night but evidently there is something that happens that disrupts my sleep a lot with the window open. My free app SleepWatch catches any disturbances right down to the minute and seems to be pretty accurate based on it tracking times that I can remember. So last night it was borderline on whether we sleep with the windows open or close them with the air conditioning on. It never rained but I had very little disruptive sleep with the windows closed. It's not rare to hear the coyotes crying loud enough to wake me up during the night. I believe that is one reason our neighborhood was built many years ago requiring all of use to have concrete fences. 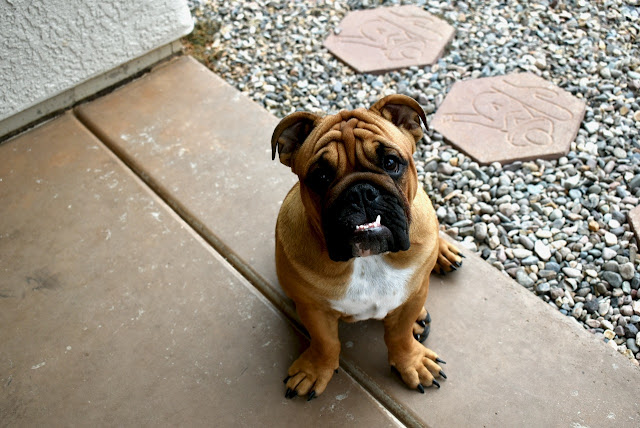 Walter is always looking for action. If one of us doesn't give him attention he will just move to the next dog or me. Or he will take off and enjoy his time in the backyard in the mornings before it gets too hot. He seems to be looking at me for answers, like "what are we doing today?" Someone needs his toenails trimmed. 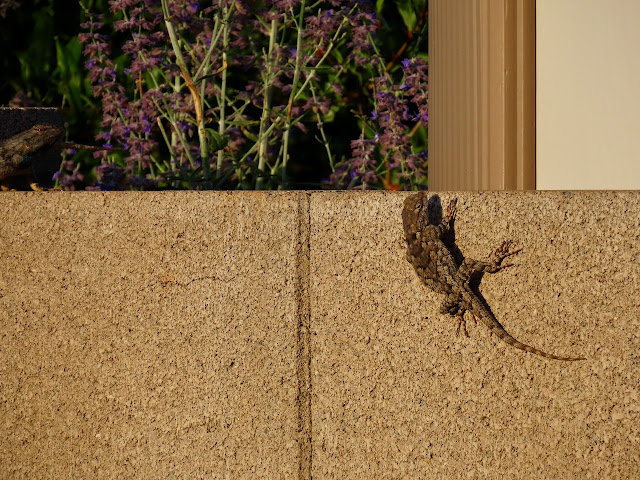 A few weeks ago snooping around Facebook I found they have a "Cars and Coffee" every Saturday morning downtown in front of one of the coffee shops. I took the 64 panel van this morning to check it out because it looked like it might rain within the next two hours that I was going to be gone. No one was there 10 minutes past their start time but I still had a nice early Saturday morning drive through town. I see a lot of old classic cars and trucks in this town. 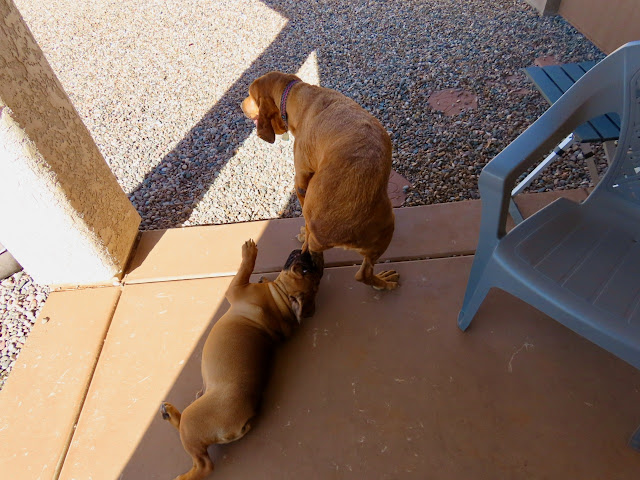 Yes ... you do see Walter's mouth wrapped around the back of Stella's leg. Luckily he has his adult teeth now and those are not nearly as sharp as his baby teeth were. Stella usually puts up with him chewing her legs, ears and loose skin on her neck. He use to hang from those areas when he was 9 weeks old but not now ... he is gaining weight by the hour it seems. 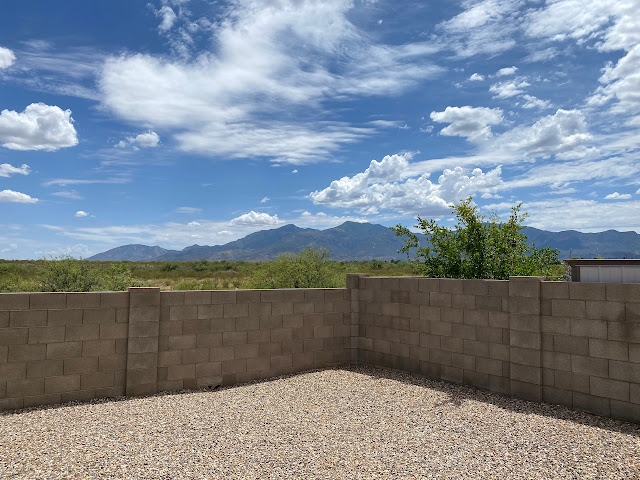 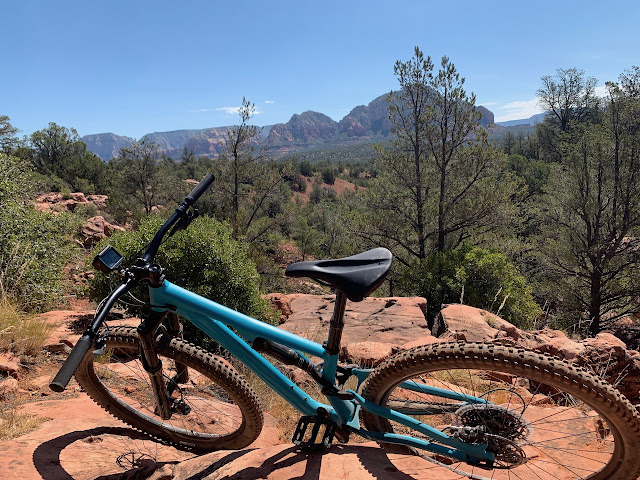 My friend up in Phoenix sent me this photo today of her new mountain bike. She had gone up to Sedona to ride some of their bike trails. She later sent me a video of her falling on her ride that her helmet mounted camera caught. The state of Arizona is so beautiful, anywhere you go. 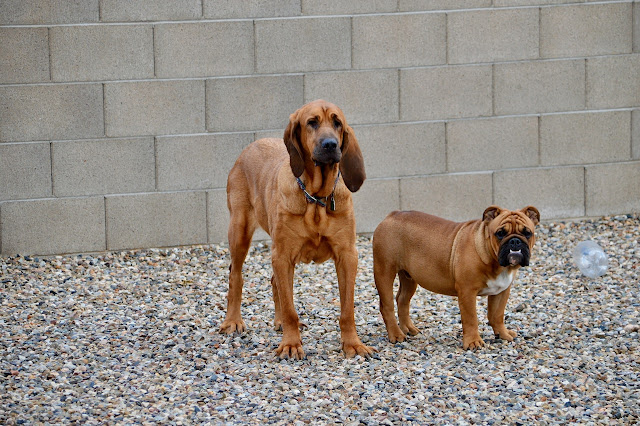 Late yesterday afternoon I saw these two sprint out of the house out the back door with Walter barking all the way. The doberman puppy next door was standing on its back legs looking over the fence. They have an elevated piece of dirt that borders the inside of their fence so no, he is not as tall as my fence when on his back legs. Diesel and Walter love playing when they are together and he does bite the doberman's legs to get him into action. They run around the yard until Walter is about to collapse. He is quite social with dogs and people. 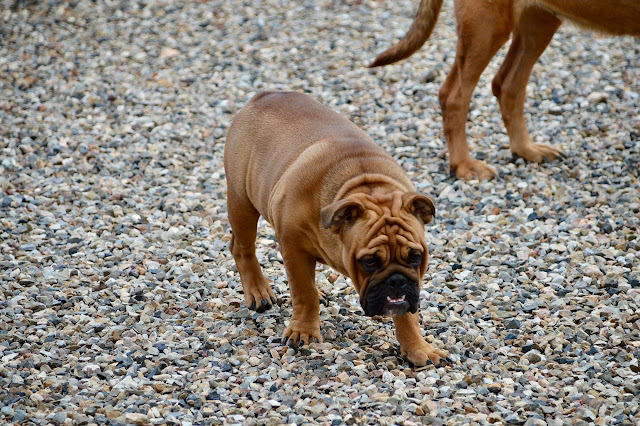 Walter is looking more and more like a bulldog every day. His head will remain smaller until the last stage of growth I'm told. Then it will catch up with that body of his. For a puppy he has been very good and easy to live with ... yet there have been those times he lets me know he is still a puppy. I'll include those stories in his blog post. 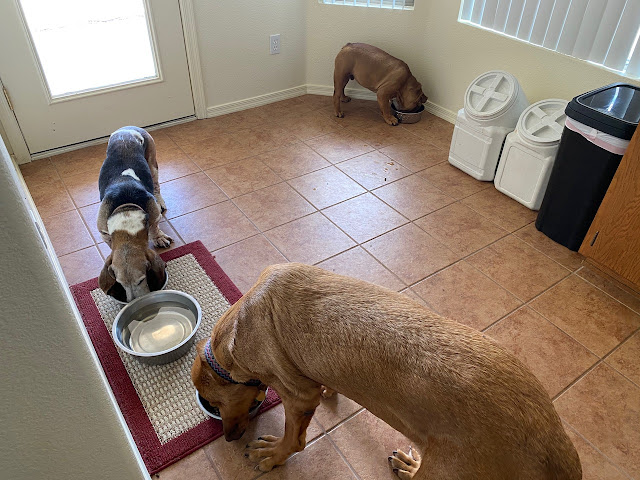 This is their eating positions twice per day. I still have to play referee and stand between Walter and Heidi to prevent him but butting in and moving her away from her food. Most of the time he will finish his food and follow Stella outside while Heidi finishes her meal. Since she has so few teeth left I still feed her kibble but soak it a little in water before serving it to her. Walter always licks out their clean bowl just in case he finds one piece of small kibble left behind. 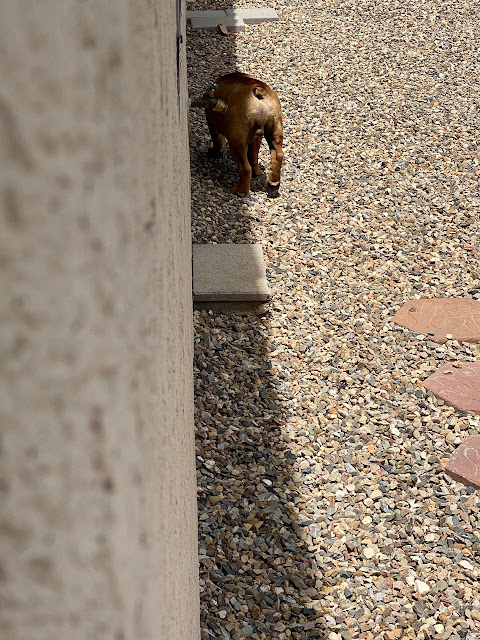 It was only 91° today after their lunch but Walter had already figured out it is cooler in the shade and those rocks are not as hot as the ones in the sunshine. You will see below that after he was finished, he turned and took the pavers back to the patio. Can they be that much cooler than the rocks? 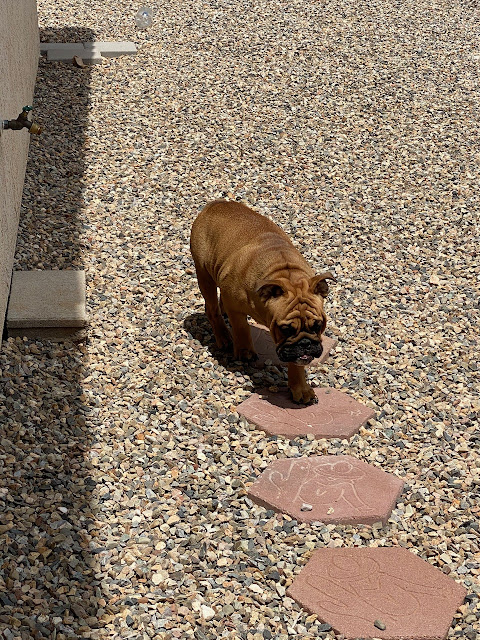 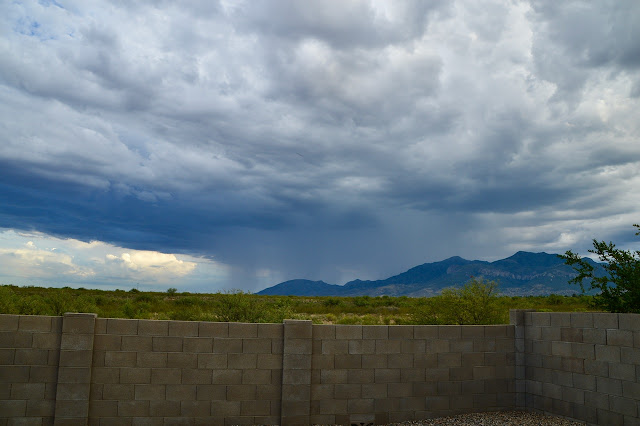 Between June and September almost every afternoon those sunny skies will turn to something like this. There you see it raining in the mountains yesterday but it did not rain here. I don't mind the monsoons because they don't last long. It's not like the all day and all night rains I use to get in "the tropics" of Southern Indiana. 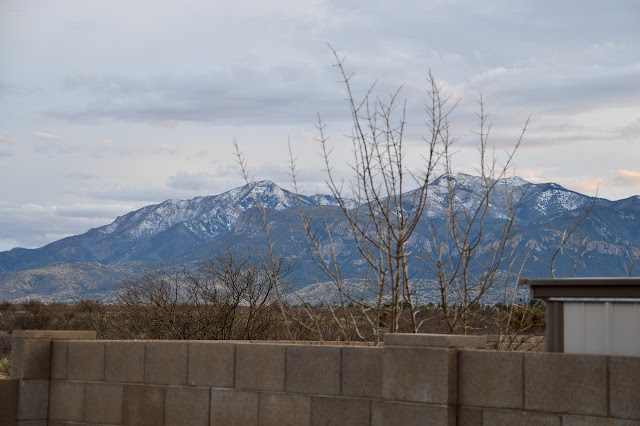 If I wanted it cooler ... I can always wait for March like it was here in this photo. 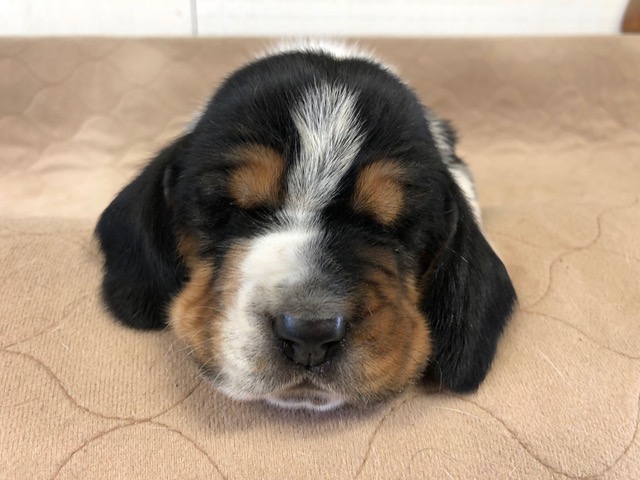 I had just sat down this morning with my second cup of coffee when I received an email from the basset hound breeder at Out West Bassets. She was sending the two week old photos. Their eyes had opened but they are not walking yet. That will happen this week. She sent the same body/face combination of photos for each puppy. These are the five males I get to choose from. I am not sure what exact order I am in the choosing which puppy and really it makes no difference, they are all great looking. 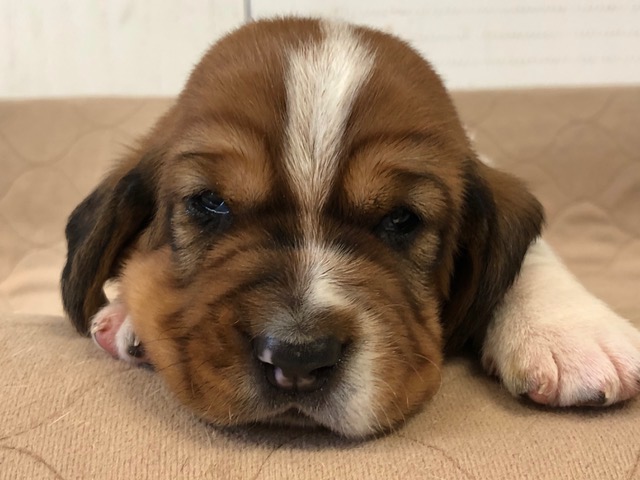 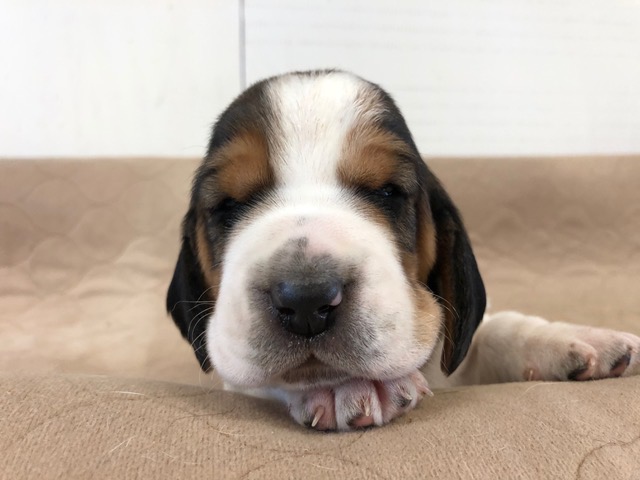 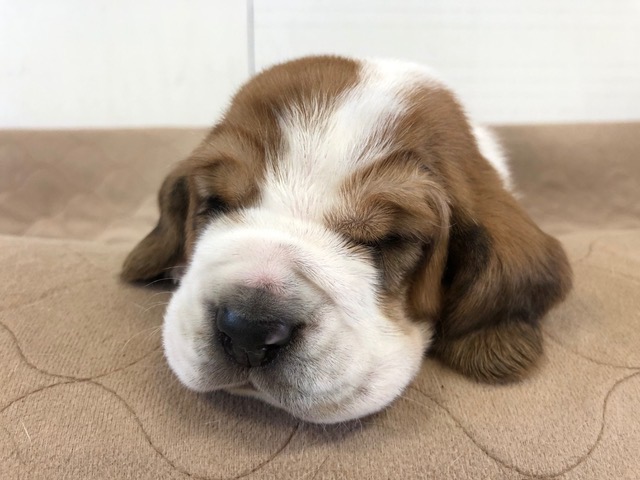 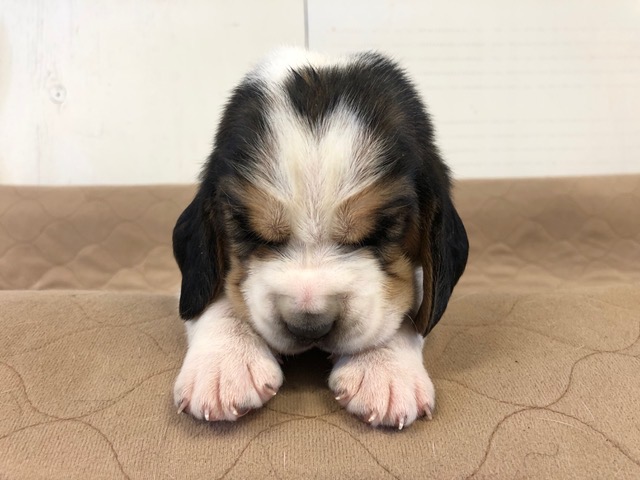 I do have a name picked out but will not announce it until he arrives. As you can see they all have an early start on long toenails LOL ... it must come with the breed. It's just not the basset I am picking but the breeder is matching what each of us wants in a basset hound with what she is seeing there with personalities. Yes, they are different and I have personal experiences that proved that to be true. Funny stories. 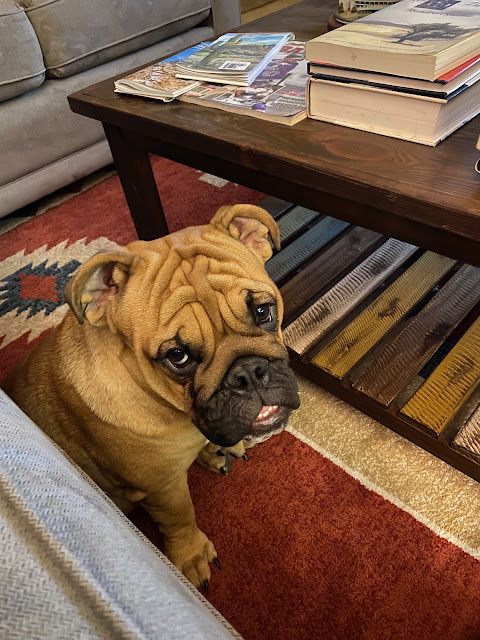 Looking at Walter in this photo you would swear he has heard me on the phone talking or can read my texts, emails or this blog and hears something about a new puppy arriving.

I am not sure what the 'new' Blogger is doing. I thought by now I was supposed to be shoved onto the new Blogger format whether I liked it or not. When I open this up to write a new post it sends me to the old format which is good. If I reopen the post later to edit it, Blogger sends me to their new format. I know they will be working in the background for a while until they get it up and running. I am happy to see they have implemented some of the older ways of loading photos.

You might have noticed since your last visit, I have added some new blogs to the sidebar. A couple of the writers have been very very accurate in what they say the world has or is turning into. I also updated some "Pages" at the top with my new bicycles, the two new VWs and of course Walter added to the Hound page. By mistake I deleted the page of Favorite Photos but will try to build that back and add it later.

As much as I would like to change the look of the blog, I cannot find any of the new themes that Blogger supplies that I want to use. Wordpress had many more options but I am not paying for something that is free here and use to be free there. I almost changed this one back to having a sidebar on each side of the post. I guess that is somewhat in limbo and nothing as far as looks will change.

I have good cool air conditioned air that flows over my computer room and Walter's loud snoring (like now) but recently I have noticed for the first time in three years the fan on my iMac is running different times. That tells me the computer is overheating but when I check the hard drive activity nothing is running in the background nor soaking up all the RAM. My last iMac lasted a little over seven years and I hope this one lasts as long. I am still addicted to a large monitor so I will never move to just an iPad or laptop for all of my computer usage.

I mentioned a few weeks ago our mayor put the town on mandatory masks. That first day I saw a face to face fight between a customer and a Walmart employee when she was not allowed into the store. Our positive cases have dropped since that executive order but like anywhere else in the USA, that topic is pretty toxic and flammable. I am NOT going to go into the pros and cons of wearing a mask, it would just take too long.

Recently I have seen fewer and fewer people following those rules here in town. I have had business tell me I can take my mask off when I enter their bike shop or the tire store, etc. It has not affected my lifestyle too much because I am already "stay at home", somewhat of a loner and had groceries delivered last fall when I had surgery. I buy a lot of stuff online if I need it ... so not a big adjustment to COVID-19.

I will say when there is a forest fire they GO TO THE FIRE and work to put it out ... they DON'T drown the whole forest with water or retardant to do it to put those same fires out.

Blogging gets me back to taking more photos. About the time I think my iPhone is the best camera, my Nikon D3500 or D3200 or the newer Canyon SX70 HS pulls through with some good photos. The old beat up and used Tamron 18-200mm lens worked out well today.  I used all of those cameras for the photos of this post today.