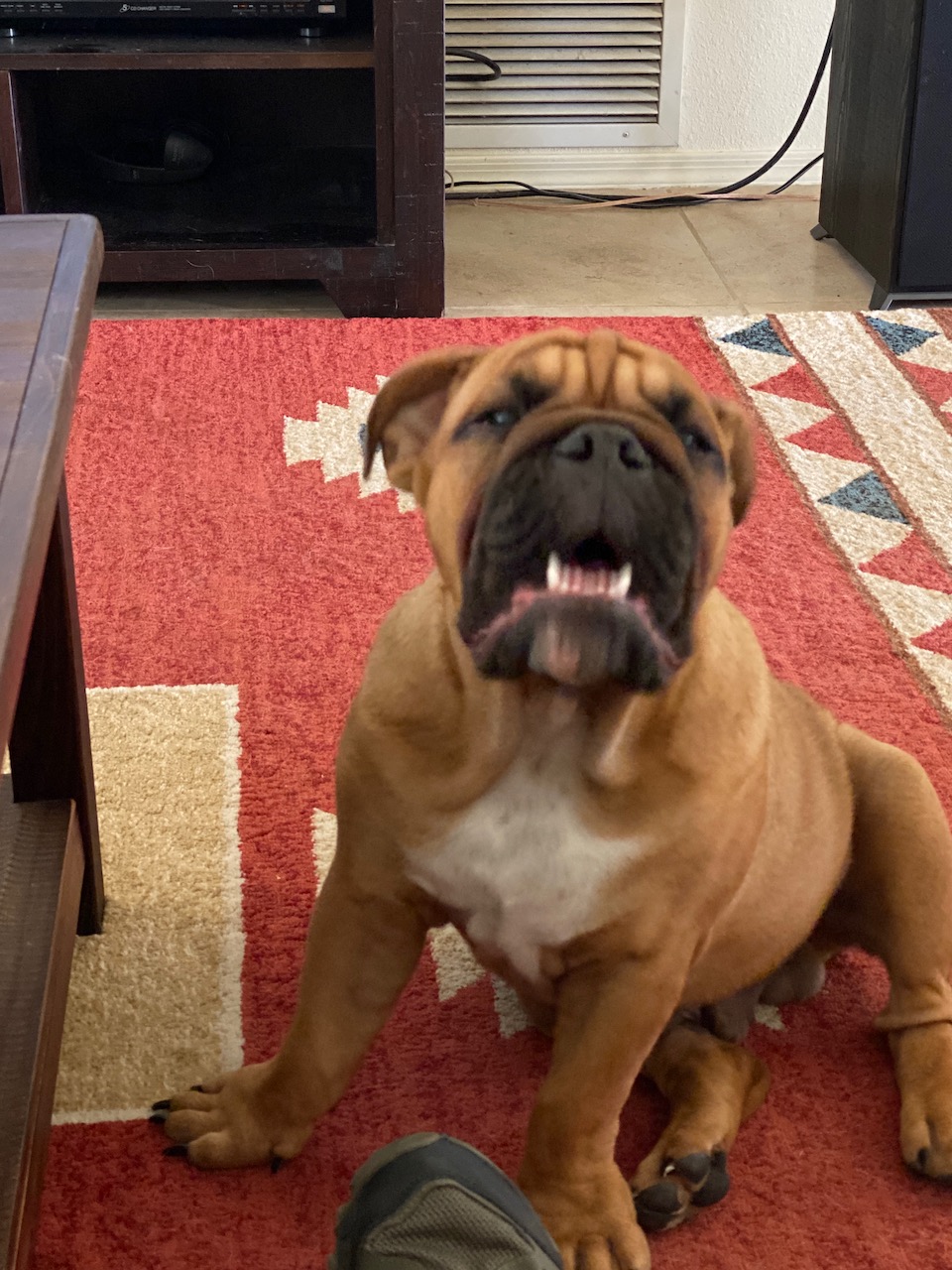 Walter is quite the talker. He will not always do a full bark at me but a mix of a growl and the start of a bark. Here there is NO food involved. Stella is sound to sleep just to the right of me on the floor. Nothing on tv he likes watching and he does watch tv sometimes. No ... he just wanted some attention. His next move after this with no results ... he tries "divebombing" up on my lap but can't quite make it that high. He knows he is a "bulldozer". 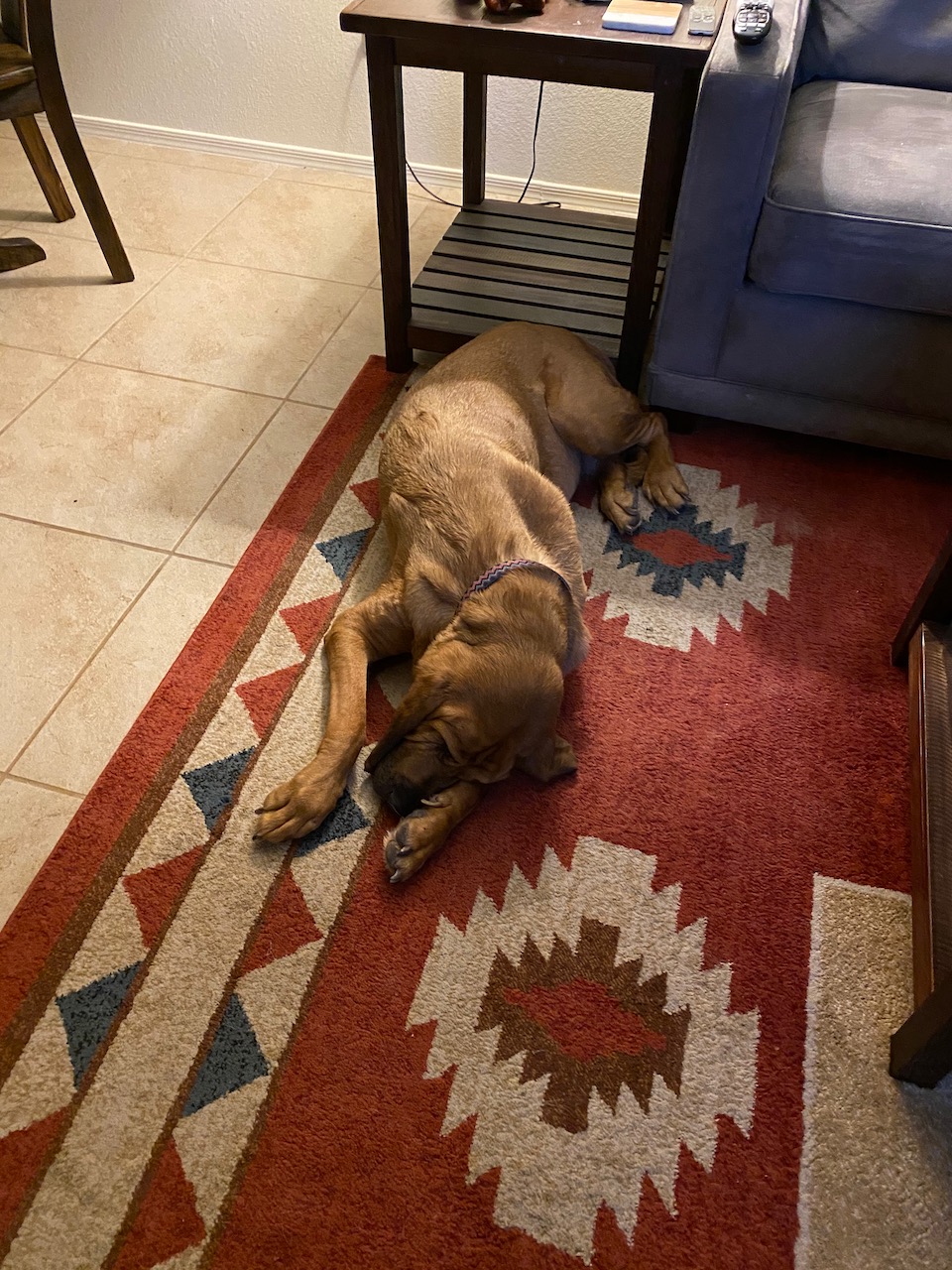 Stella doesn't run anymore and didn't the last couple of years in Indiana after she and Stella would chase deer at full speed. Some days she does not want to go on the .62 mile walk. She lays in the sun a lot and sleeps. And sleeps a lot inside. It's good that Walter will give her the time she needs to rest. Just normal activity for an aging bloodhound. 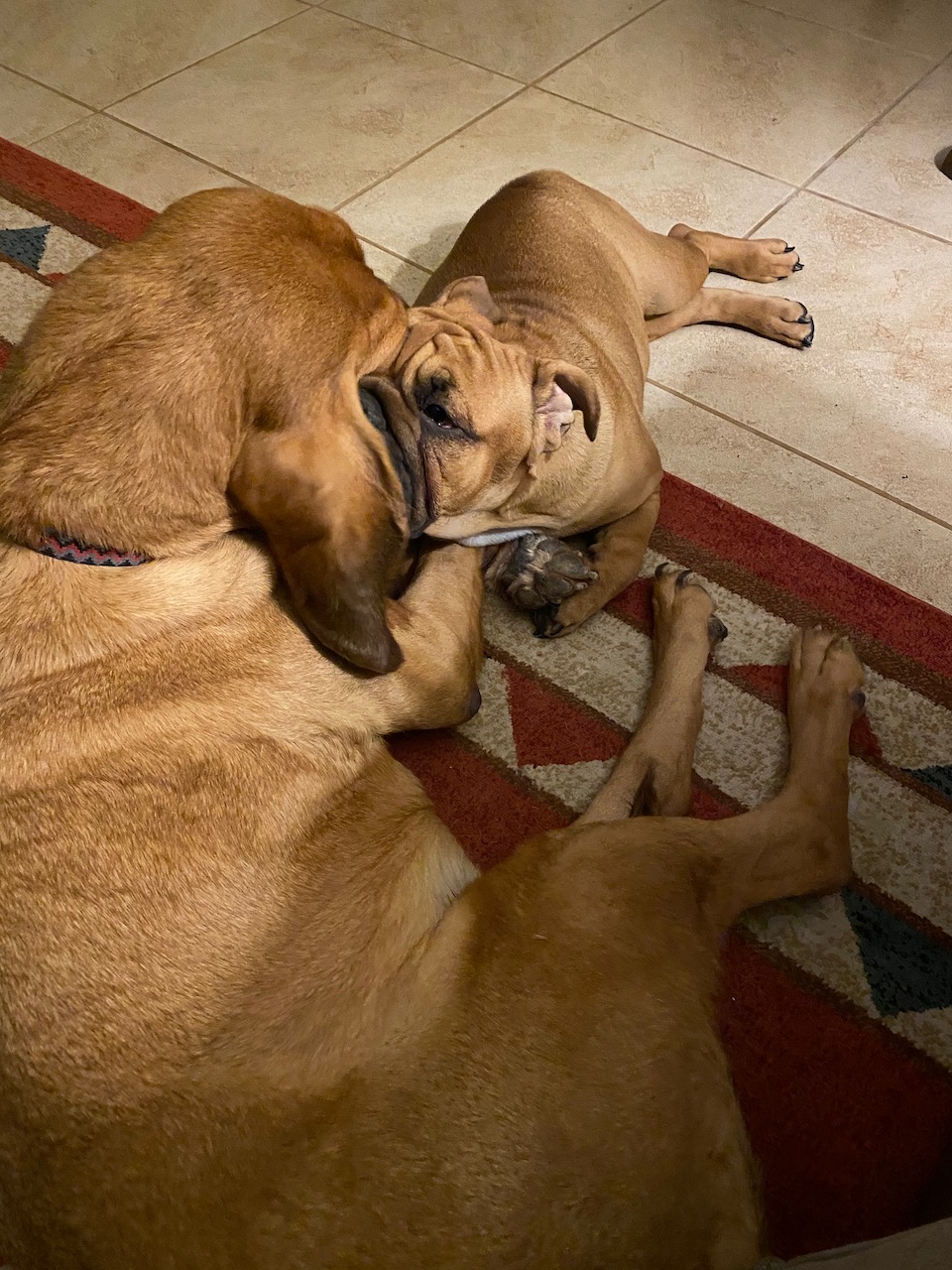 There's times that Walter does my work for me by cleaning not only Heidi's ears but Stella's. 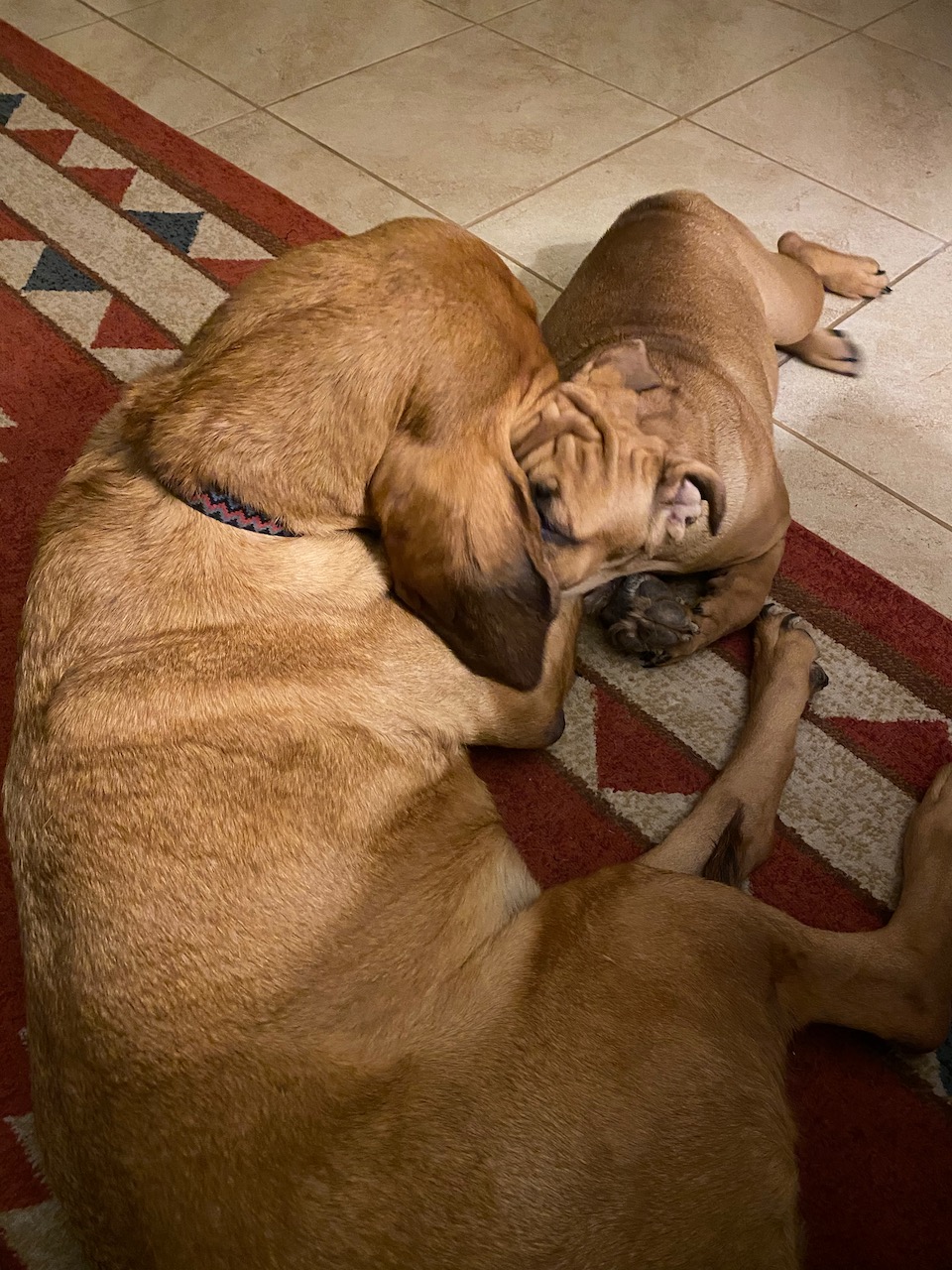 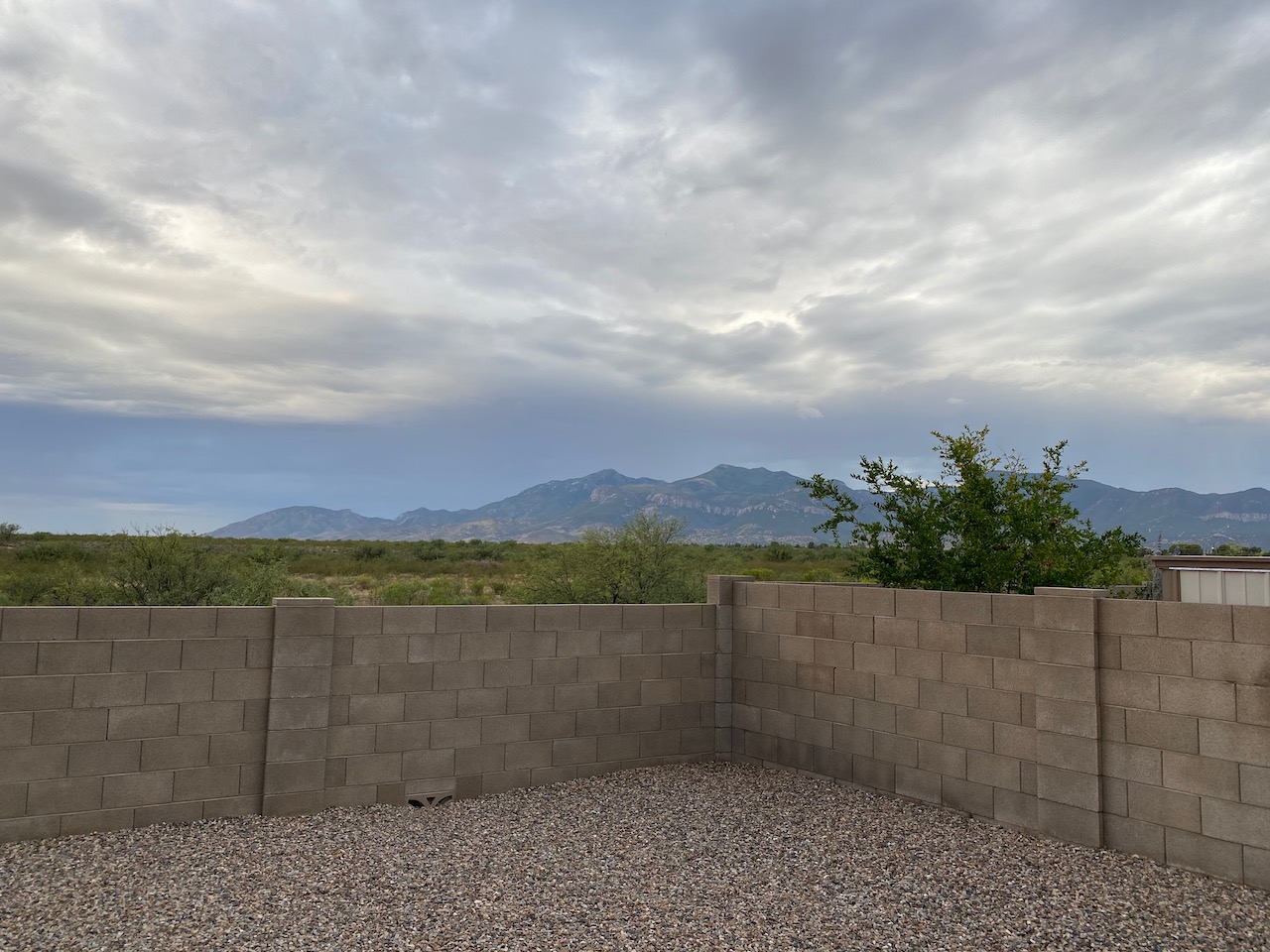 It stayed like this most of the day. Like I said the other day, my activities go with the flow. Spur of the moment decisions on what to do, so today laundry was done and I hand washed the dishes instead of using the dishwasher. I could feel the humidity when I woke up at sunrise. It was windier than normal and a few drops of rain as I stood outside taking this photo. BTW, I've never seen water in the backyard high enough to flow out that one brick they put at the bottom of the fence for drainage many years ago. 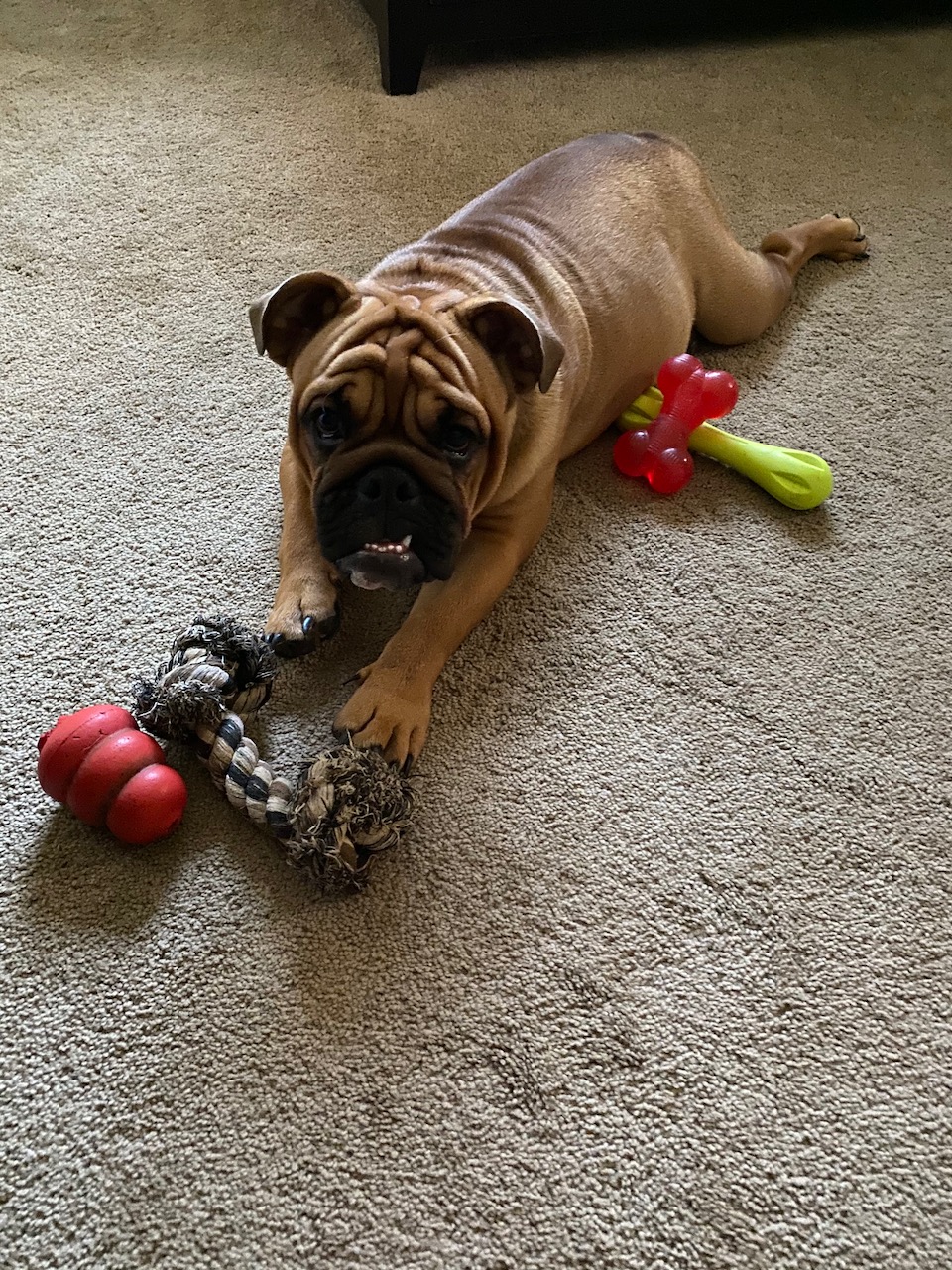 Walter decided early this morning that if none of us were going to play with him, then he would drag what bones he could find into the computer room and play alone. Out of that stack, only the small red bone is new ... all the rest were pulled out of the hound locker since Heidi nor Stella were not interested in them ... that is until Walter wanted them. 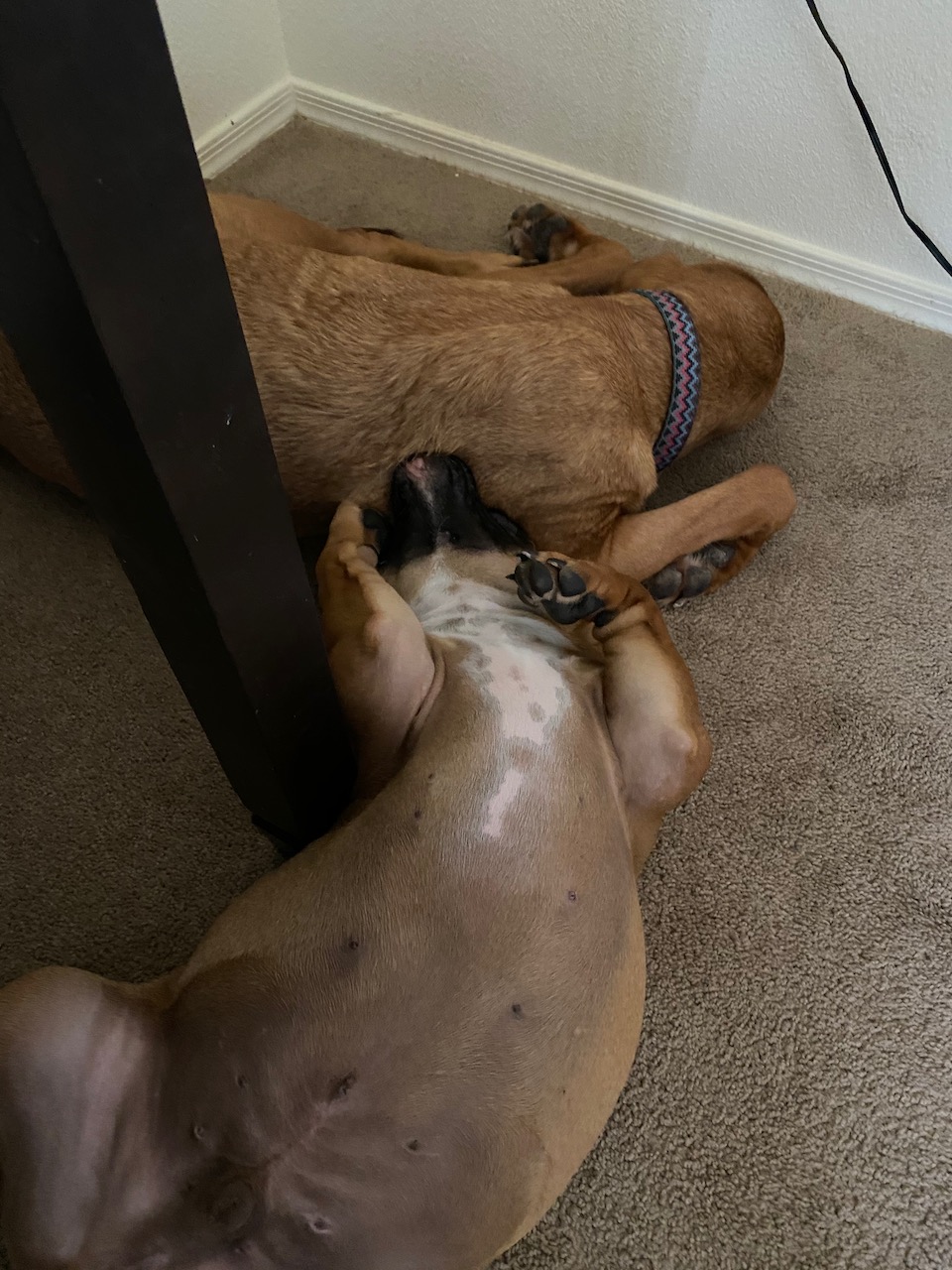 He is sleeping and snoring loudly after his solo play session ... Stella never moved. 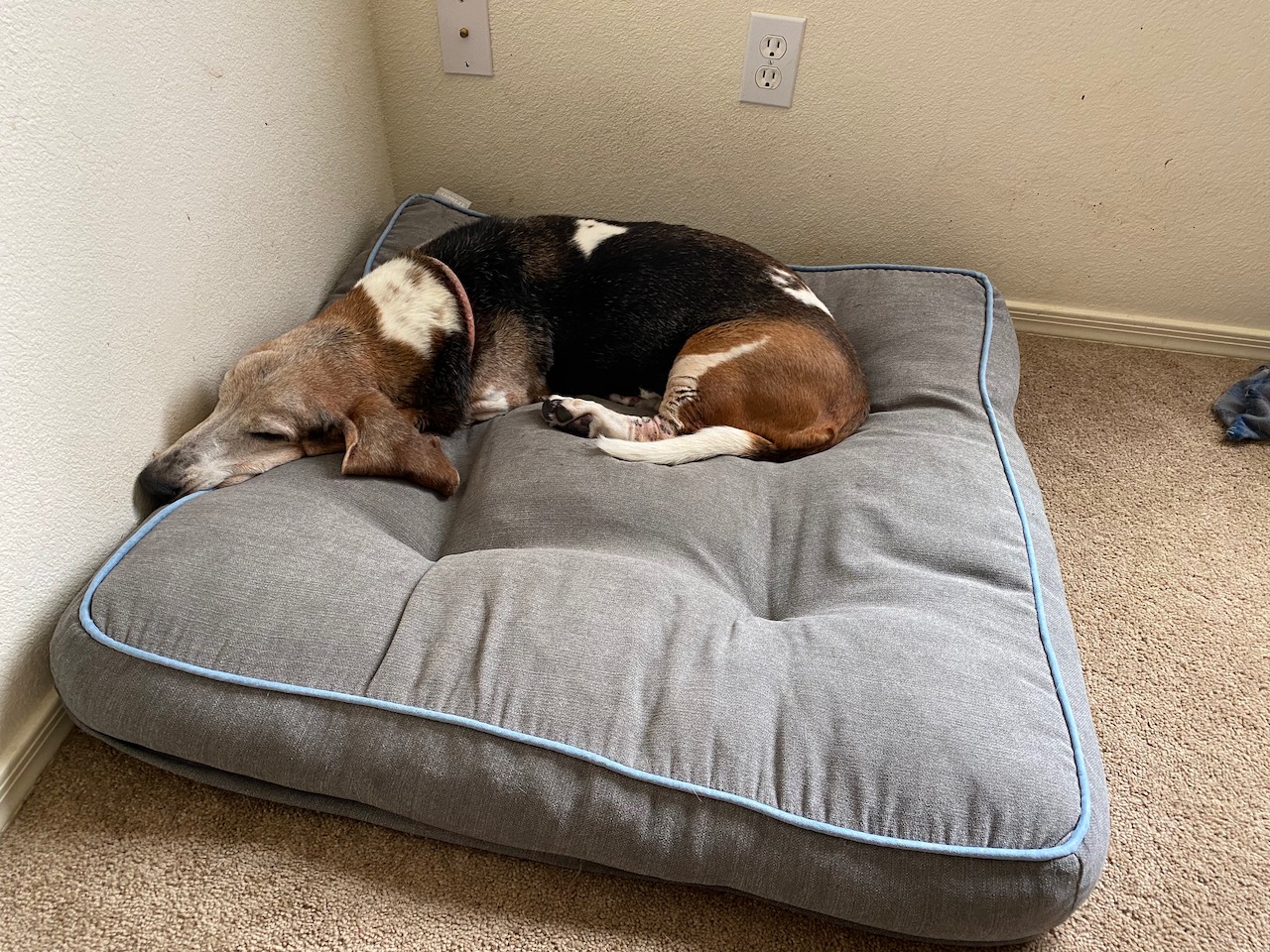 Heidi's dog bed was part of that laundry project. These next three photos are a typical daily afternoon rain or shine. 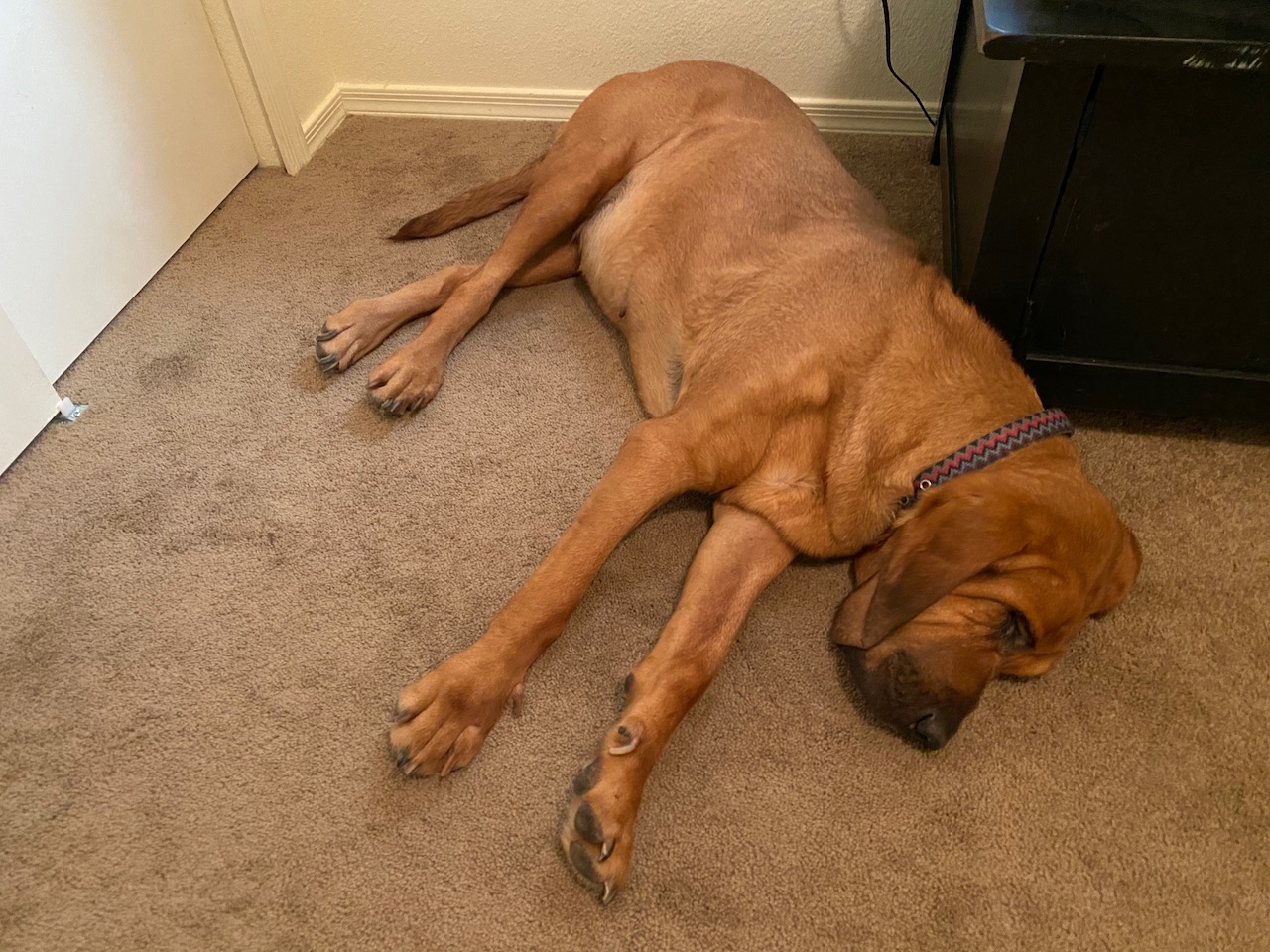 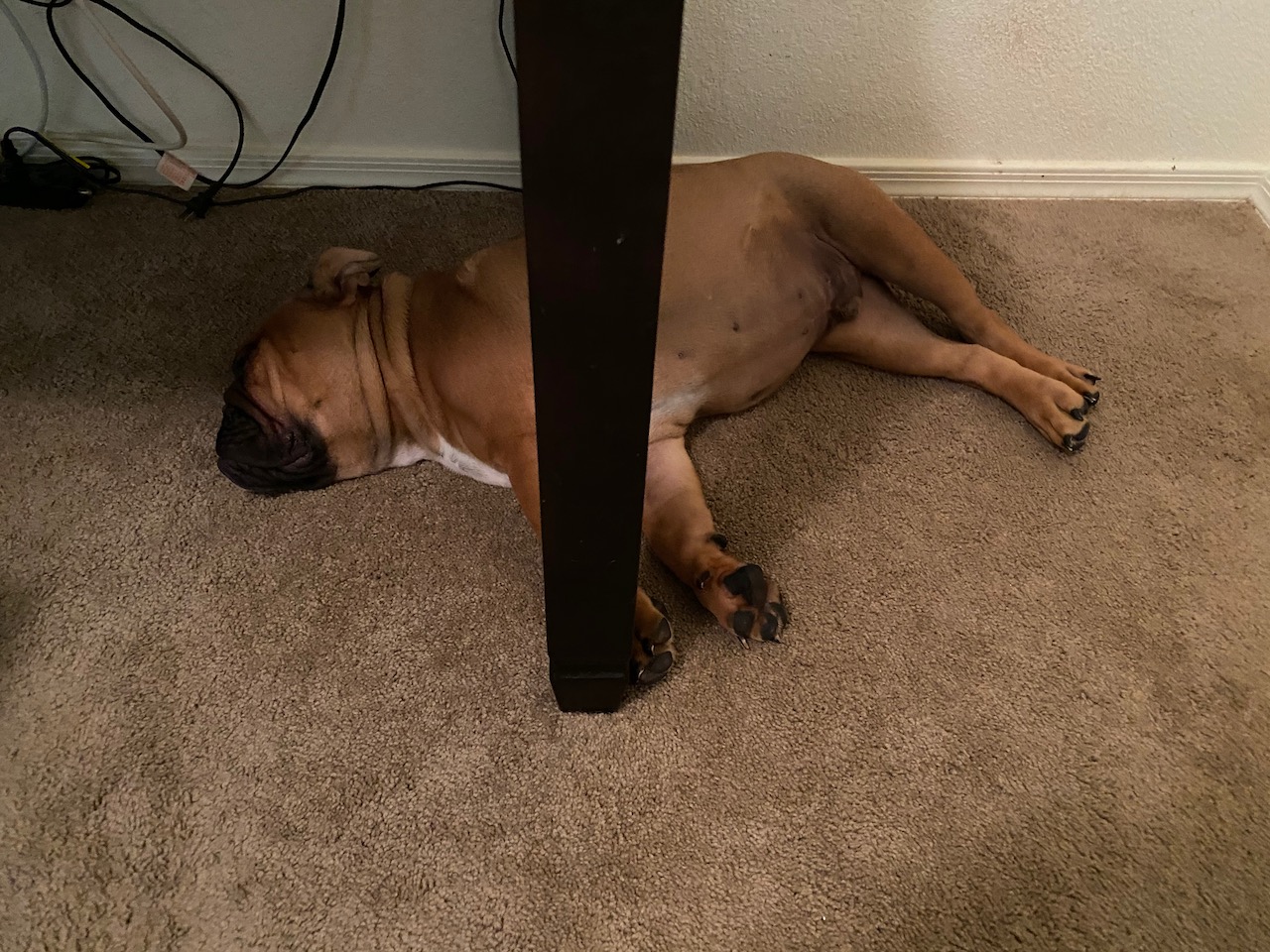 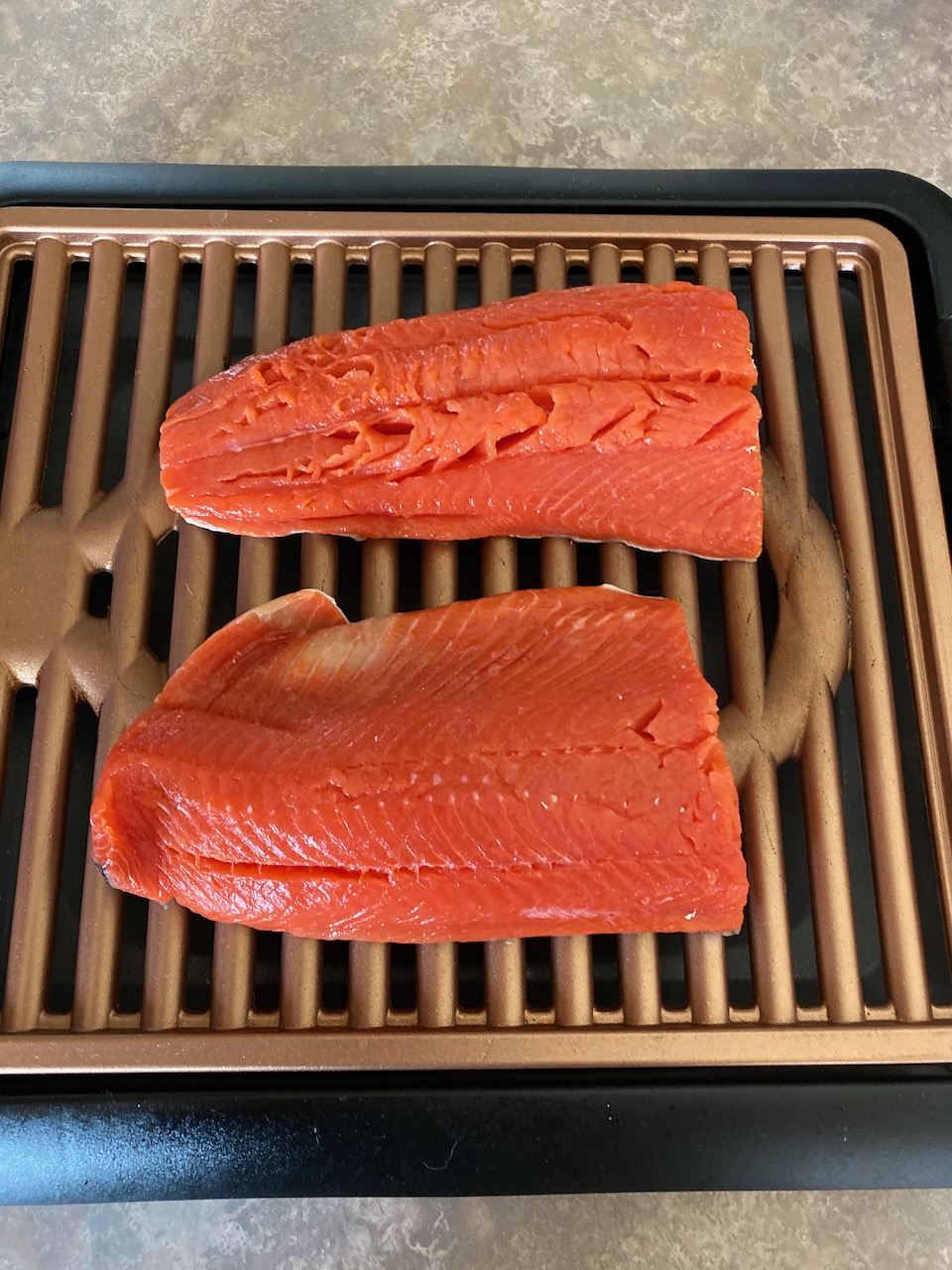 I was on a plant based diet again from February until just recently. I spent almost every night feeling hungry at 7pm no matter how much food I had eaten that day. I went back to eating fish, like this Pacific wild caught salmon. That amount makes 4-5 meals. I see nothing wrong having fresh salmon in my diet. I also don't see anything wrong with an occasional veggie pizza with cheese. I was cold turkey on the dairy products for months until I had the first container of Ben and Jerry's ice cream then I fell off the plant based diet wagon really hard. My annual bloodwork is scheduled for this December and YES ... I do have a spreadsheet with all of last years numbers to compare with those in 2020.

With all the daily news on this virus and all the examples of people getting sick and some cases dying after they attend a small family dinner or birthday party ... it totally confuses me when I see photos of a family birthday party on the lake and inside a house back in Indiana. No masks were worn in the 17 photos they posted, age range was from 5 years old to over 60 years old. Social distancing was just a rumor to them. They were packed next to each other as close as possible for the group birthday photo .... what am I missing here??? I'd like to know later if anyone of them feels sick and tests positive.

I don't have pictures but I received some handles for my 1964 Panel camping windows. Three were missing and the ones I bought from a member off the Samba forum were made to perfection. I can now open and close those louvered windows with ease. Forum members are 100% in favor of me getting the wheels and bumpers painted instead of the rusty crusty look. Since the body of the bus was already painted, it would only look right to finish the wheels and bumpers.

I'll try to get out this week for some off grid photography. It looks like rain is in the forecast Thursday, Friday and Saturday but that will put our highs in the 80's instead of near 100. I am going to find somewhere to do some hiking with the camera. Most places I've gone in the past locally to hike are closed and gated.