A Roadrunner Visits The Hounds !!! 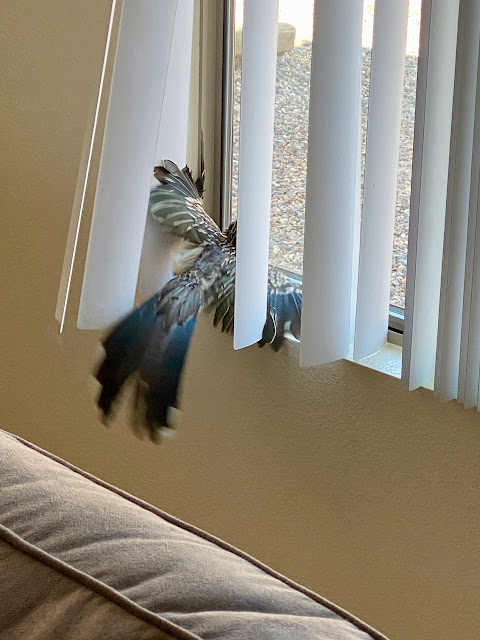 While I was on the computer this morning looking at the latest photos of the basset hound puppies, a little over 3 weeks old, I heard my vertical blinds moving in the living room. It wasn't windy, it was sunny and the window was just opened enough where Stella would not see a passing dog or person and want to jump out through the screen. Walter can stand on his back legs to look out the window so I figured he had seen something where he was going nuts and was up into the blinds making all that flapping noise.
I turned the corner into the living room and was scared. The hounds were standing by the door but were looking at this mysterious creature trying to escape and making all the noise. Walter was in so much shock he was not even barking and Stella was only observing. It is one of the disadvantages of keeping the back door open so the dogs can come and go as they please. (No I am not going to install a doggie door into the wall). I have had smaller birds fly into the house but nothing this size. I grabbed my broom trying to swat him out of the blinds and away from that screened window I feared he would rip through ... I also opened the front door.

He flew over the couch when he saw me or the broom and headed back under the loveseat. I saw no sign of him under the couch or the love seat and figured he must have existed out the front door so fast that I didn't see him leave. I walked around the love seat toward the window and there he was ... sitting on the lower shelf of the end table. I moved back around the other side of the couch keeping him in front of me, as I slide the broom handle through the small space between the couch and loveseat .... he sprinted out the front door, running down the driveway like any good roadrunner would do. 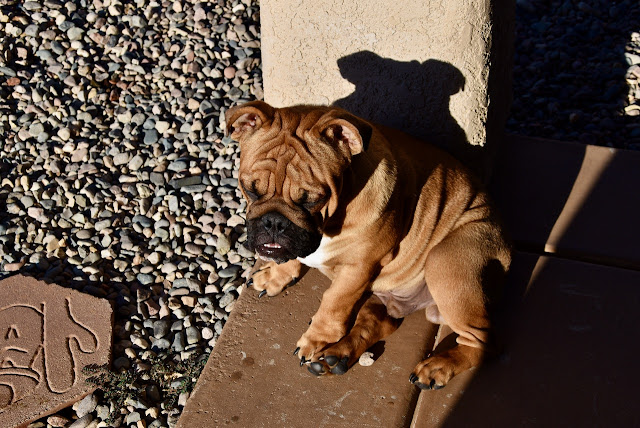 Before all that excitement it looked like it was just going to be another normal day here in the southwest. Sunny skies would lead to afternoon dark gray clouds with possible rain. I caught Walter sunbathing alone this morning when I couldn't find him inside. Glancing up I saw the smaller lizard was back on the fence. 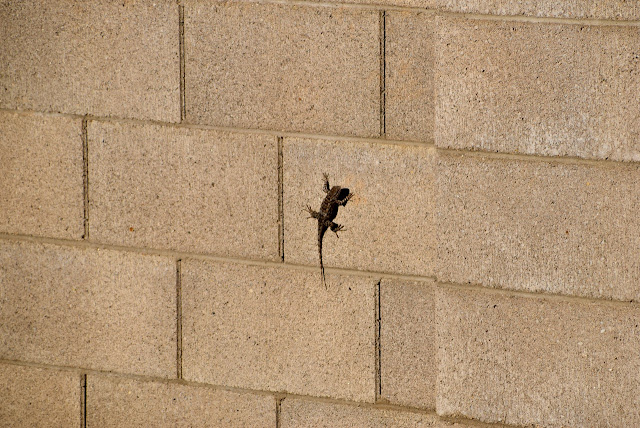 Walter looked right at it but didn't move, didn't bark and acted as if he had zero interest in the lizard. He did not even walk in that direction to get a closer look ...  he studied for a while then just looked away after he saw what it was. 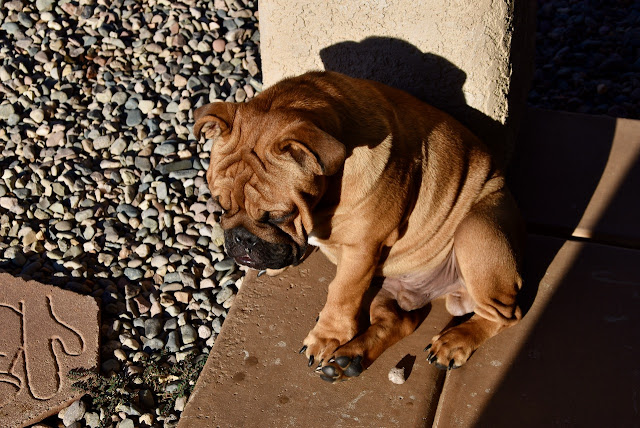 He was back in deep thought trying to put his plan of the day together. He is pretty independent like I have mentioned before but he likes structure in his life with few impulse decisions. 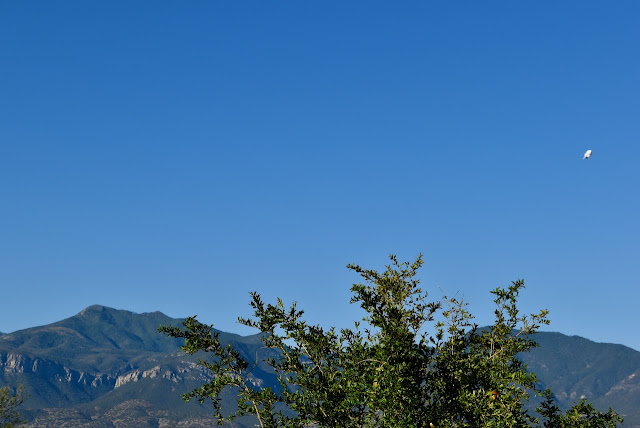 The Aerostat was flying high this morning but that didn't mean it was going to be a day of great weather. They would pull it back down before this afternoon. My hourly weather this morning was showing storms this afternoon but they never showed up here. It just shows how fast the weather can change in this area. Yet a lot of the rain in the forecast is in those mountains and we never get a drop. I can say I have only had one day of a normal monsoon these past few weeks, where it was short and hard rain, enough to flood the streets but didn't last longer than 10 minutes. 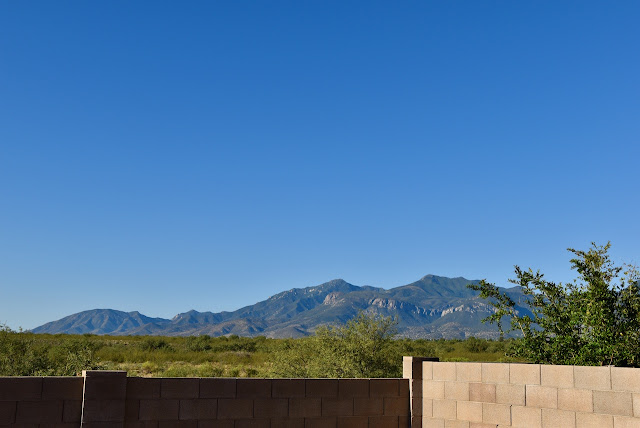 Just like I do or did with cars, I always look at houses for sale on Zillow, not that I am in the market for a house. Very few if any have a view like this. There is a house down the street for sale so I guess that would be one with the same view. With all the rain we've had, it's nice and green at 4,650 ft elevation. 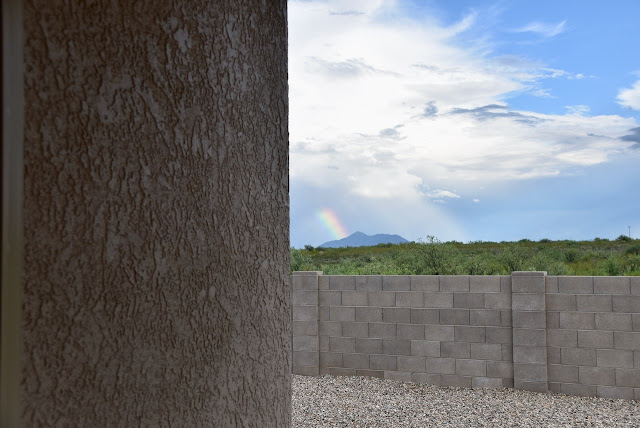 It was another 'wasted' day for me. Lack of energy, lack of motivation, hungry but for nothing I have in the kitchen, or thoughts of a drive but no idea where I want to go. It's gone on for most of the week and is never a fun time to go through. Consequently I spent most of the day catching up on my sleep since most of my nights have a majority of 'disrupted' sleep as the app calls it. As I stepped outside this afternoon around 5pm I caught this rainbow down in Mexico. The radar showed there had been some pretty severe storms in that area and on the back side of the Huachuca Mountains. 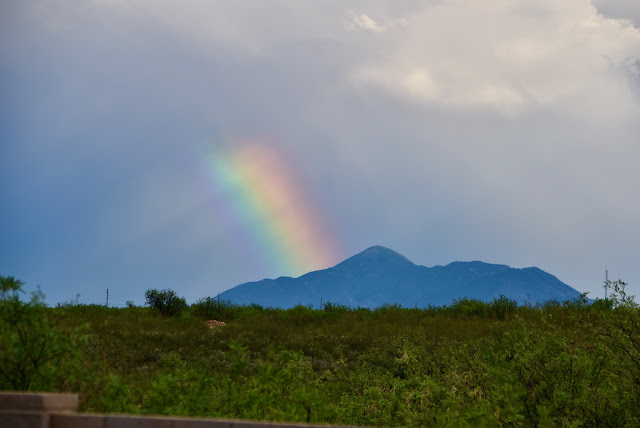 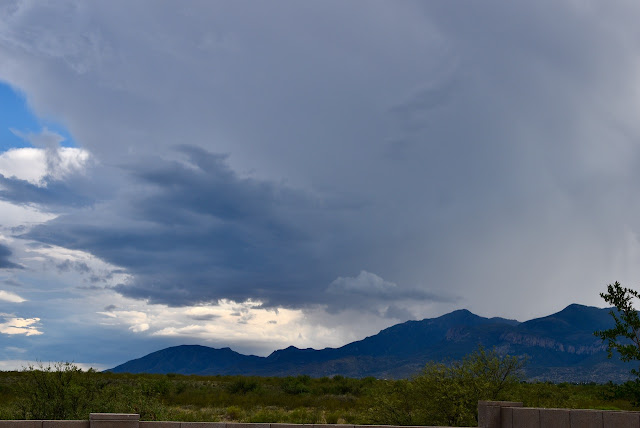 Looking toward the Southwest towards Coronado NF and Miller Peak ... 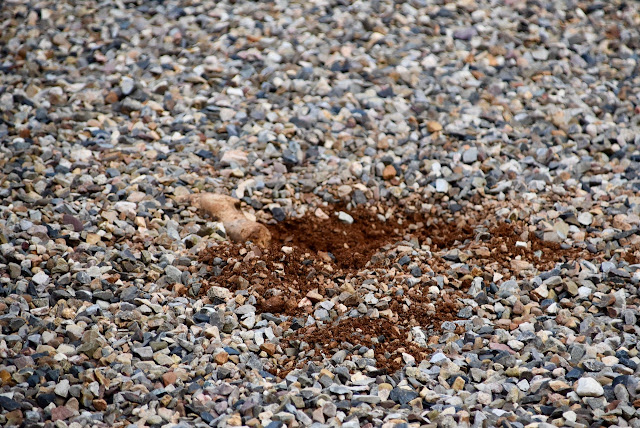 This is nothing new and something Walter started within his first couple of week here. He's a digger but not what I would call a big or obsessive digger. He found this Mesquite tree root weeks ago. It's not going anywhere, they are that strong. But he likes to see if he can pull it out to use as a chew toy and I keep filling it back in because I like my rock yard without holes and red Arizona dirt. 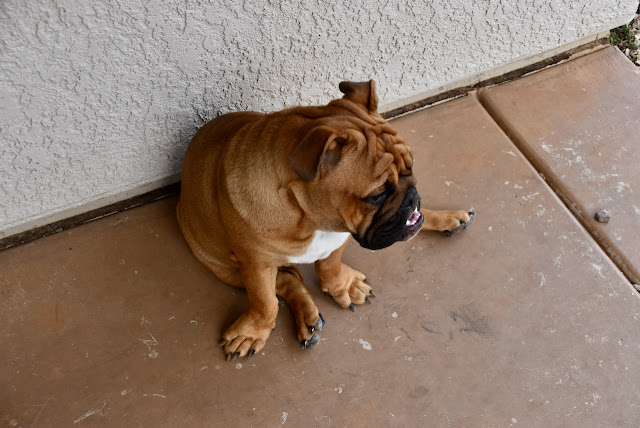 He knew I had found what he had been doing most of the day when I was awake. Every time that I am taking a siesta the hounds also sleep in the same spots they do at night. Maybe I don't know it and am actually adapting to the hound lifestyle during this 'stay at home' stuff. There is a fine line between the hounds lifestyle and that of a retiree. 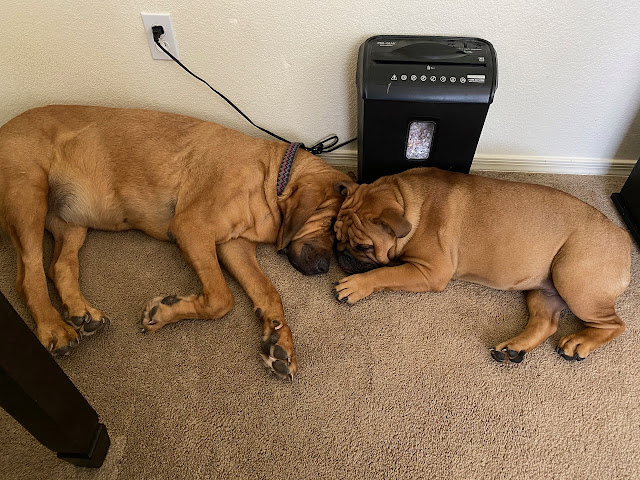 Saturday was so exciting I can't remember what we did. It was early evening when they were sleeping head to head and Walter snoring at different times. He is really getting heavy and hard to pick up any more. He has 12 more months of growing before he will be full grown. He will not be much taller but wider and his head will finally grow in a proportionate size. I think he enjoys the company of Stella and she enjoys him the majority of time. At times he wants to play, she wants to sleep so I have to come to her rescue.

Not sure what the plans are for the rest of the night. When a bloodhound wakes you up before dawn, these nights for doing something don't last long.