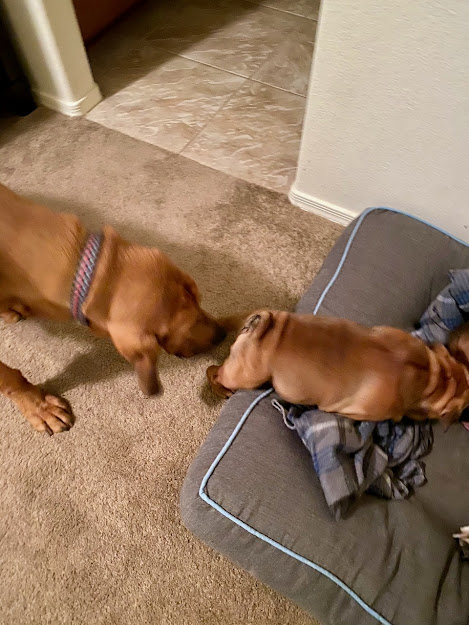 He was so shy when I first saw him. He barely moved laying flat on the floor. By the time we finished the hour and fifteen minute drive home, he walked in the front door like he had lived here his whole 9 week old life. He did not sniff the area as much as a bloodhound or basset hound puppy would and almost instantly made a left turn to head down the hallway to the bedroom where Heidi was sleeping. She didn't realize just how much her world would change, when he tapped his flat nose against hers, waking her up. 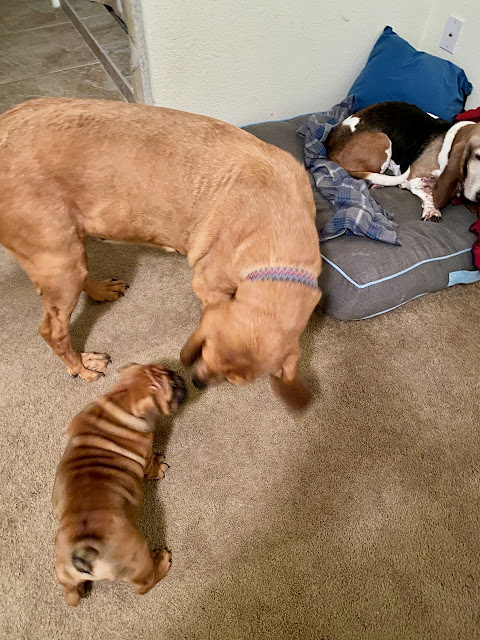 Stella was more than curious who this creature might be and proceeded to identify what this ball of fat was moving all over the floor and under her legs. It did not take long for her to approve of him and they have been almost inseparable since that first 15 minute introduction. 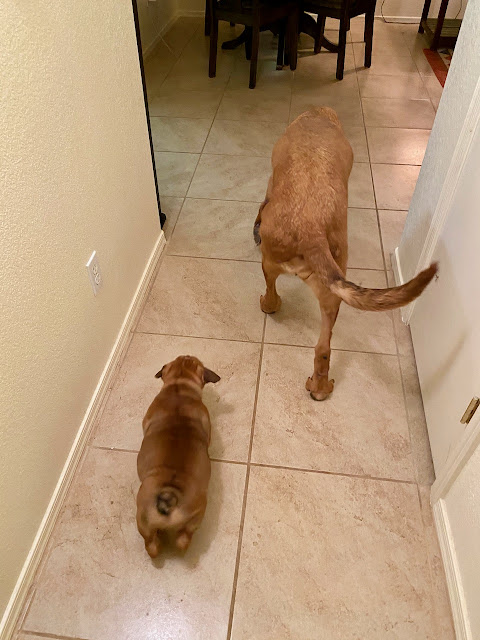 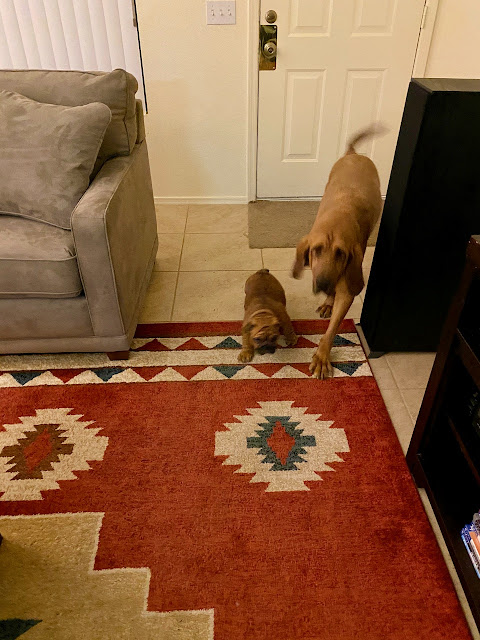 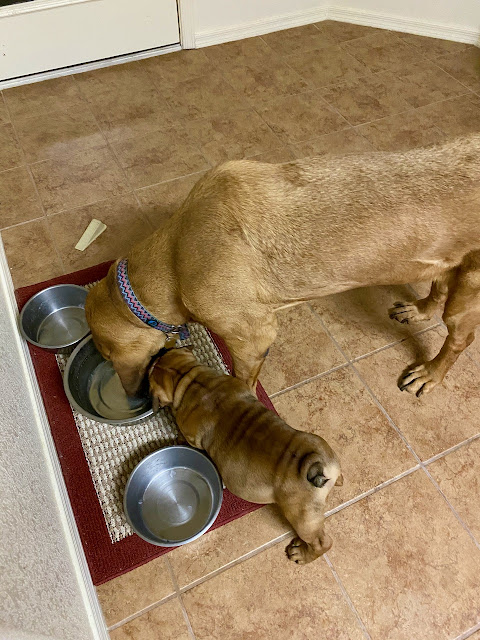 He showed no hesitation drinking out of the water bowl shared by Heidi and Stella. I knew then he was going to be able to hold his own in the house with two larger hounds. 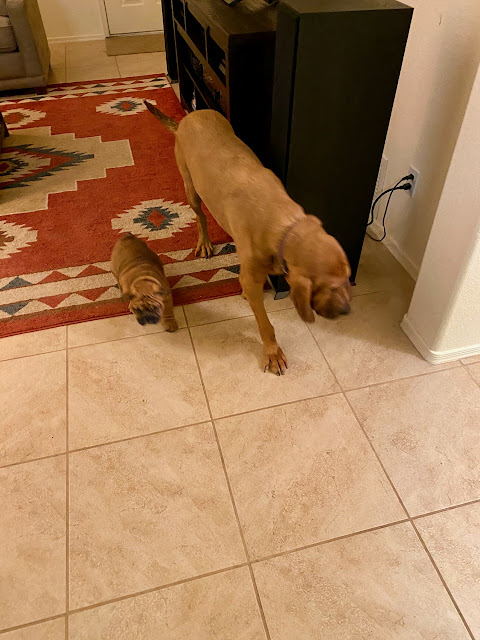 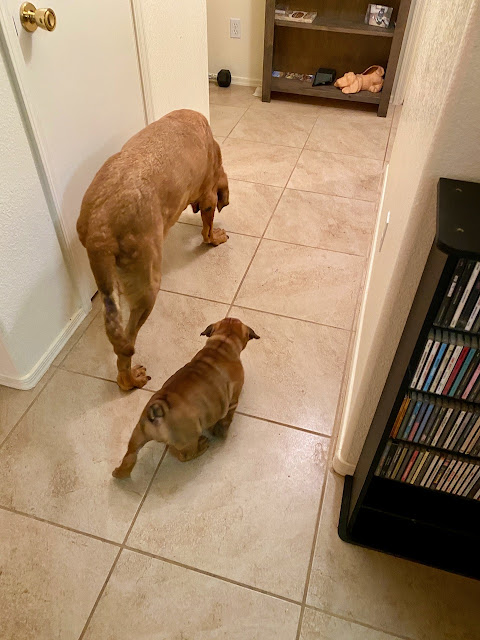 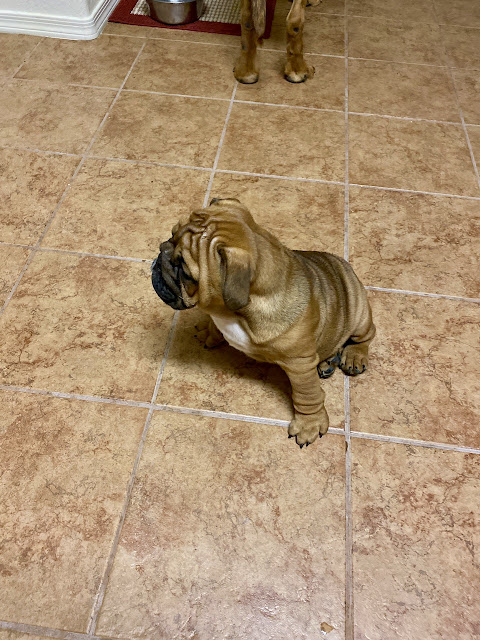 While Stella tried to escape from him there was only one thing that stopped Walter in his tracks. He caught his reflection in the oven door window. He didn't move then started a small growl as if he was about to attack that other small dog he was looking at. 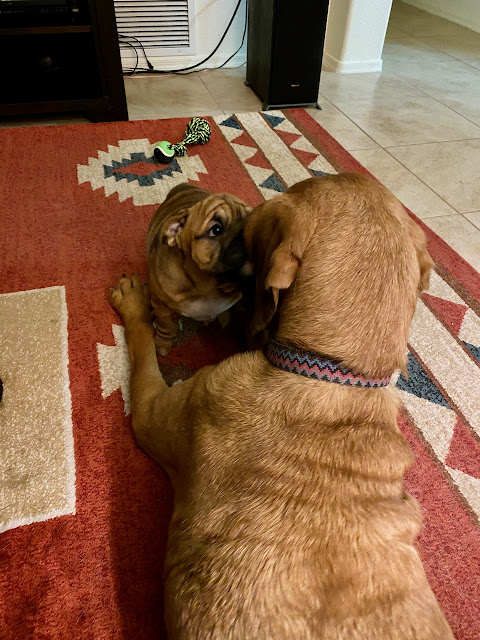 Once he realized that Stella wasn't around, he took off for the living room to see if she would play. 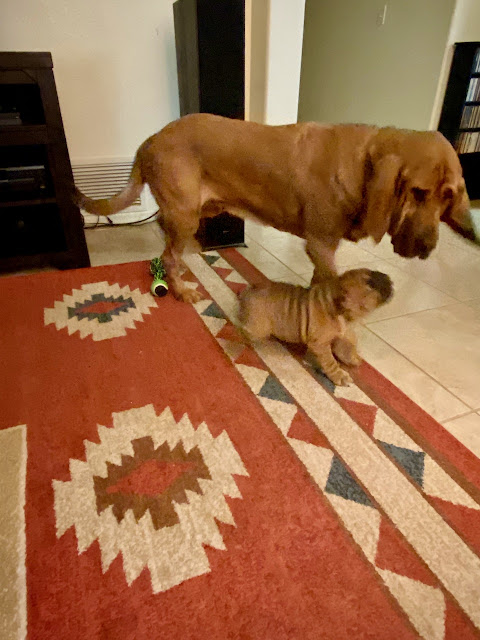 Remember the last time Stella played was with Sadie and that had to be almost three years ago. Plus I had not had a puppy this young since I had bought Sadie in 2008. I accepted the fact before I bought Walter that I'd be getting up in the middle of the night to let him out. (that proved to be wrong) I was getting up a few times in the night to let Heidi out so that would not be a big deal. 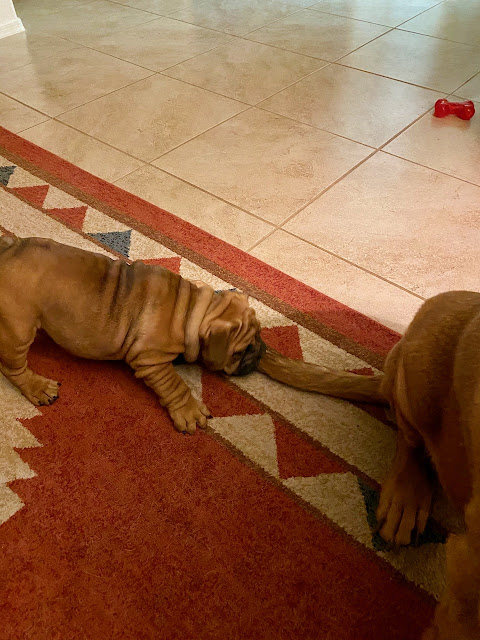 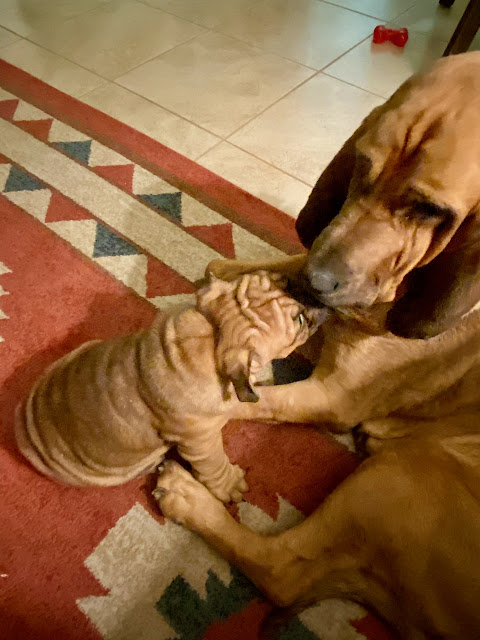 Stella was pretty tolerant of his sharp puppy teeth, pulling her tail or her jowls. Her ears took a beating by him hanging from them, really ... all 16 pounds of him would hang in mid air by her ears if she was standing. This was not the reason I bought Walter but it was good to see that Stella was wanting to play. 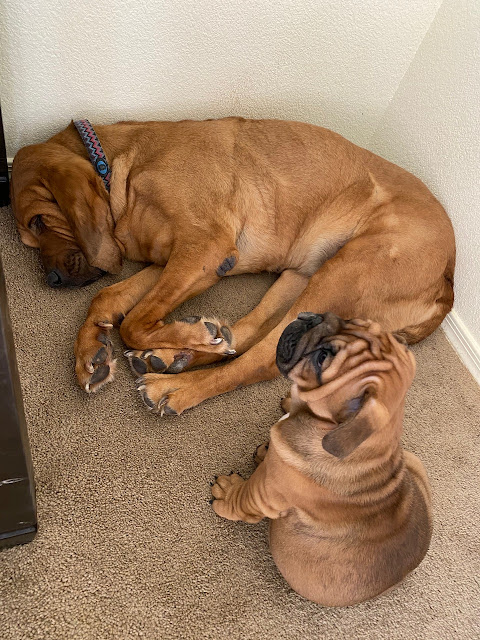 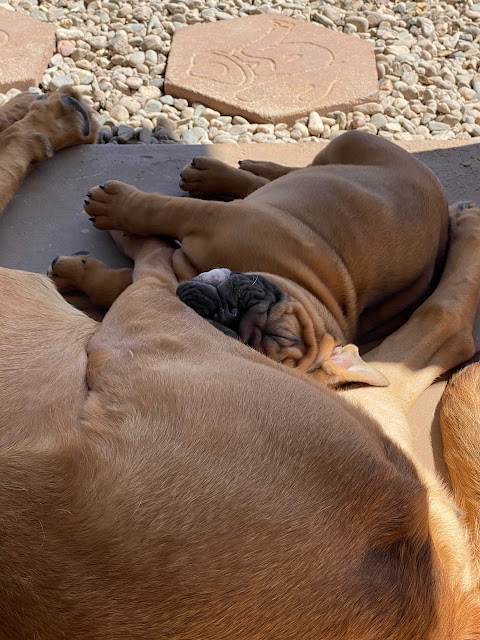 By the next day it was like they were lifelong friends. 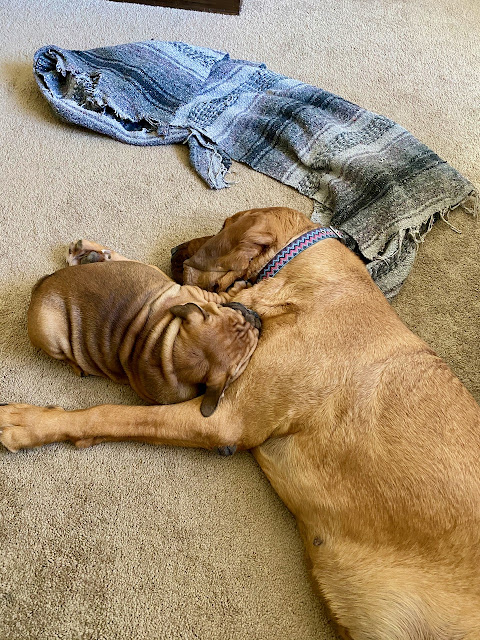 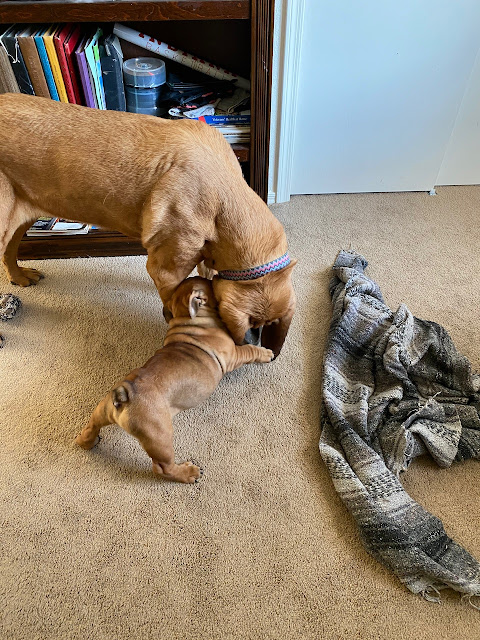 We get up at sunrise, they have breakfast while I fix coffee then head to the computer. From that first morning Walter has always played or tormented Stella until around 7am where he either goes outside by himself to soak up some sun or falls asleep in the doorway of the computer room partially on the tiled floor. 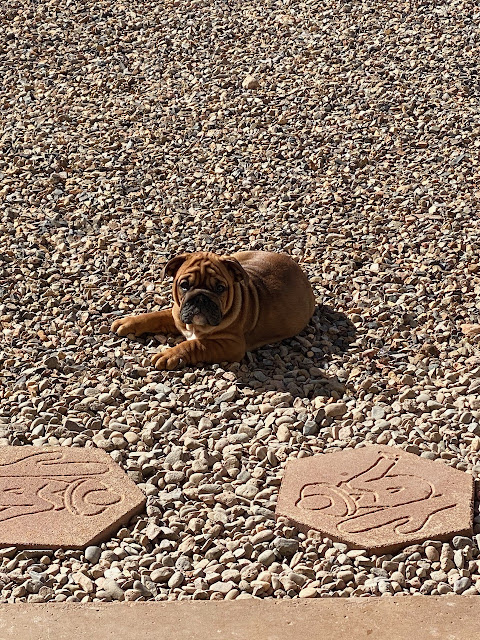 I wondered at the time if he would grow into all those wrinkles. I honestly didn't know since he is my first english bulldog. 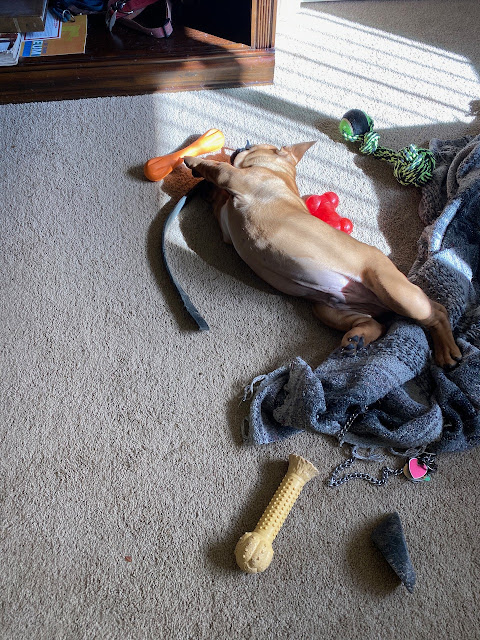 Anything within reach he drags out and into the computer room behind my chair. As the days passed I started taking stuff off the bottom shelves of everything and moving it to higher ground. 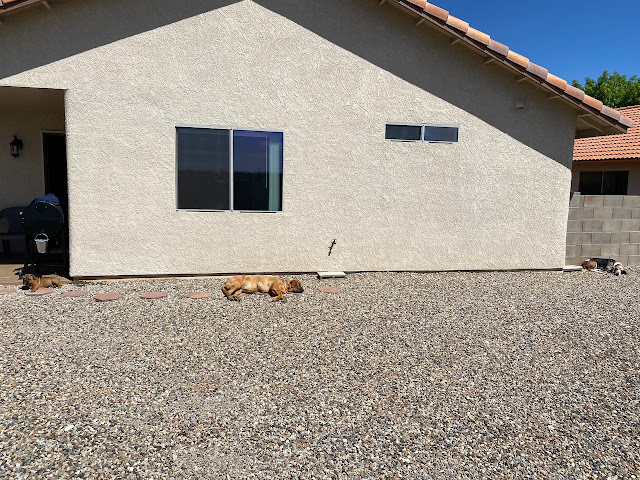 When the Arizona mandate told us to "social distance" ... they all seemed to figure out what they were talking about. Nothing like some early morning sunbathing before it gets really hot in April. 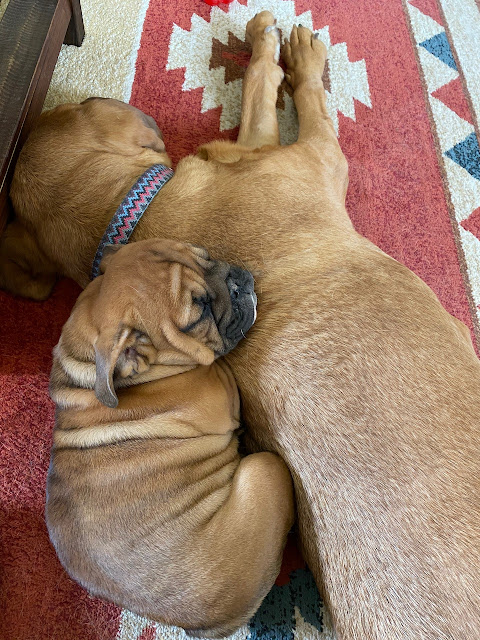 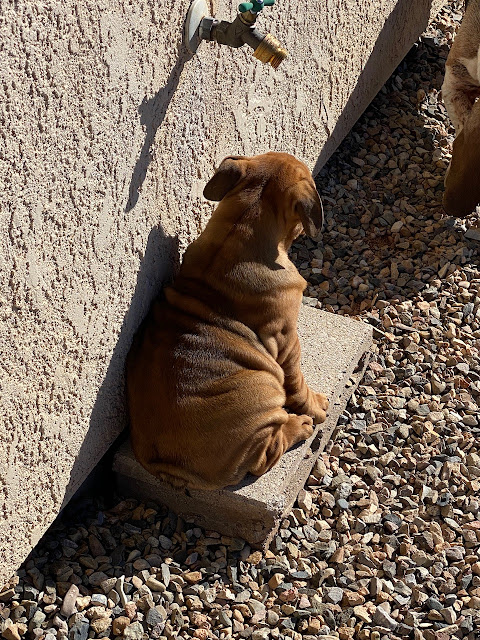 One morning I didn't hear Walter playing inside, no barking or growling at himself. I walked to the patio and looked around the corner to see this. He doesn't fit on that block anymore but it use to be one of his favorite places to sit in the sun those first few weeks. 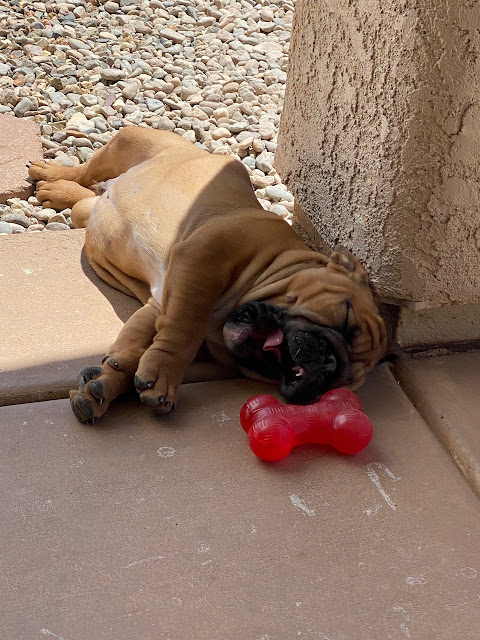 He is growling at his bone here but still enjoying some of that SE Arizona sunshine. 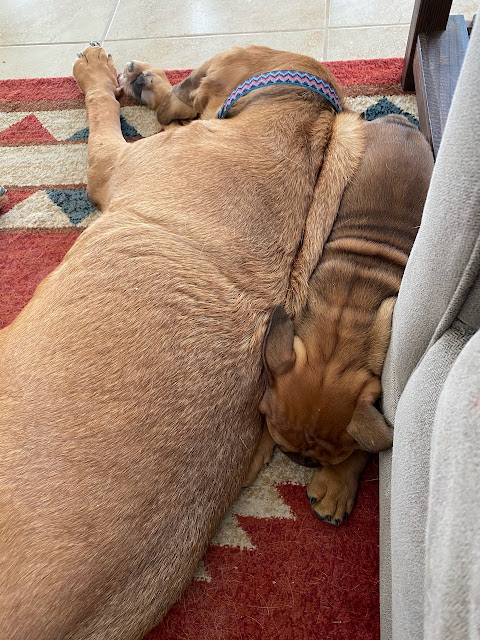 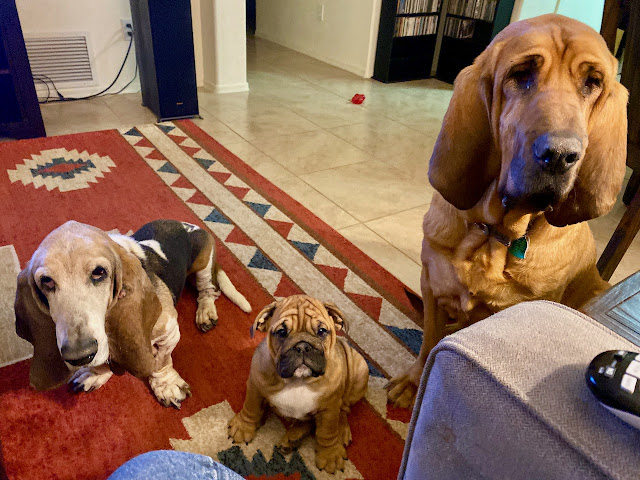 He was introduced to his first pizza that first week. He caught on very quickly what was going on but I didn't give him any of the crust like I normally give Heidi and Stella. 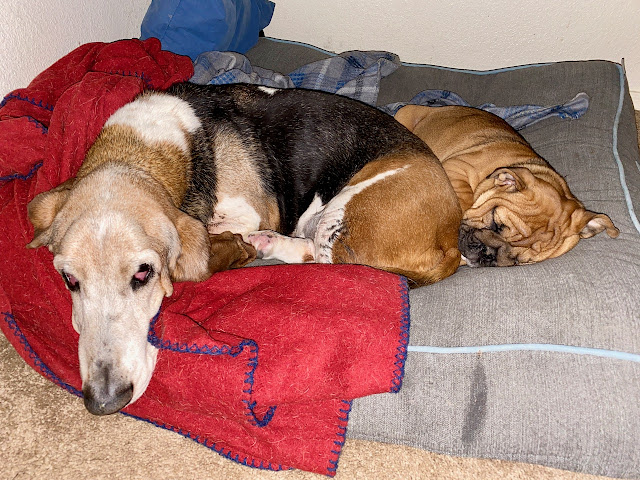 Heidi gradually warmed up to him and actually let him sleep with her on her bed for a couple of nights. He later decided my sleeping bag was more comfortable. He basically acted like this house was his house with very little adjustment to his new home. 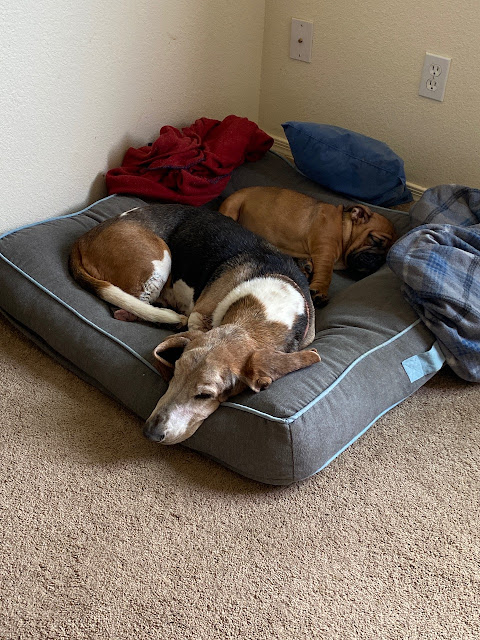 I thought I'd cover more time in this post but I had already downloaded 28 photos and the date was only a week after he came home. I might have to do more of a highlight of photos for the rest of his time here to catch up to current time.
He has been a surprise puppy to train. He does not have to go outside to pee in the middle of the night but will first thing in the morning. He knows and follows Stella outside right after their breakfast and lunch. He comes and goes as he pleases because I leave the backdoor open until it gets really hot outside. When the door is closed he has always gone to the door to be let outside. I wish puppies would stay that same 8-10 week old size.
He has raised the level of energy around here but will take time to rest. Quite a different breed from a basset hound or a bloodhound ... a lot of snorting and snoring. LOL
at July 21, 2020

Email ThisBlogThis!Share to TwitterShare to FacebookShare to Pinterest
Labels: Walter