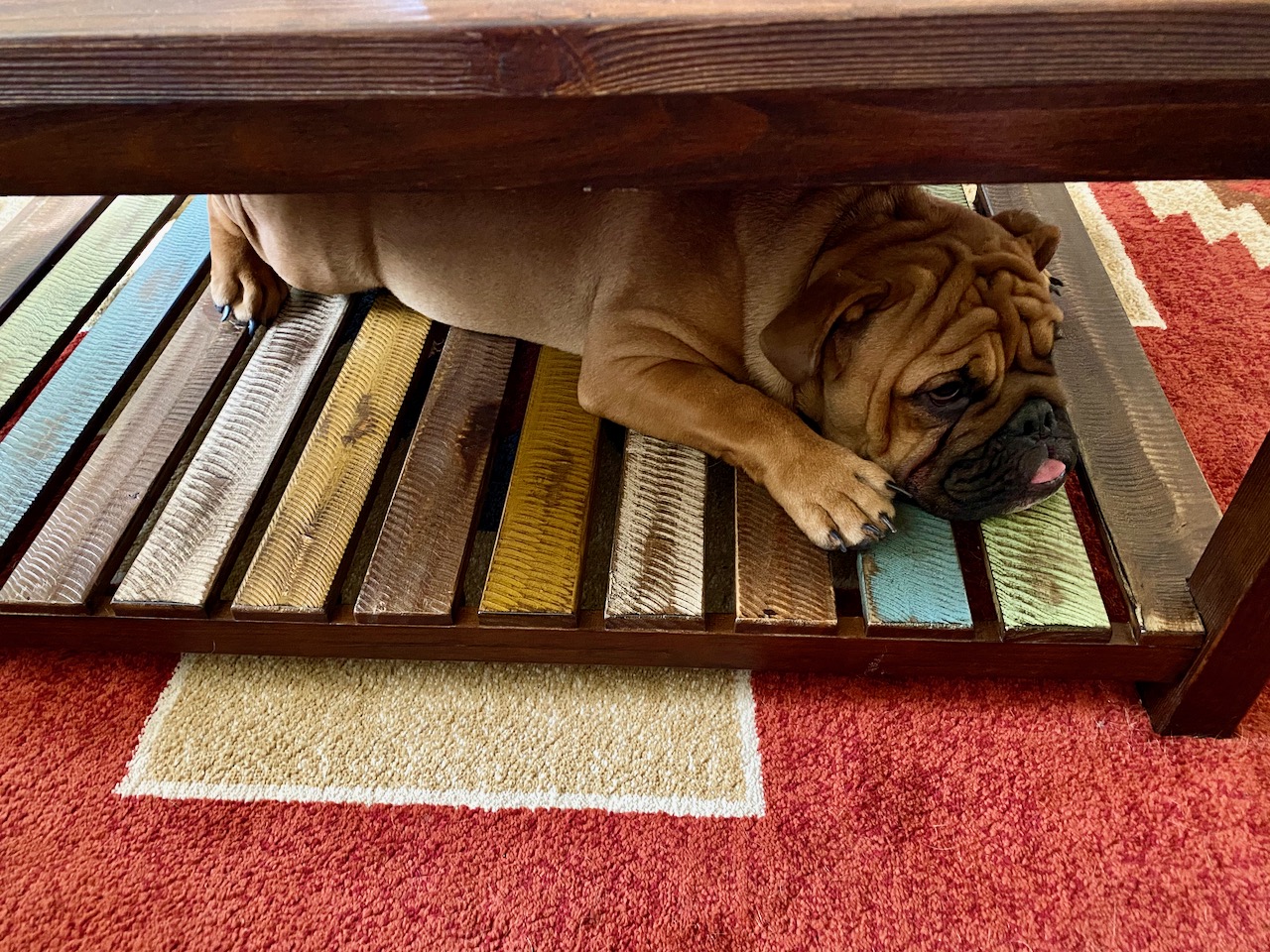 Walter still fits under the coffee table but just barely. He seems to think that is the best place to cool off after playing with Stella or I. He does like the cool tile floor but I guess there is just something about sleeping on wooden slats that feels better. It wasn't soon after I took this picture that his snoring became stronger and louder. It shows again there wasn't much going on around here. Some baseball on tv and reading books ... plus a lot of time sitting outside enjoying the view behind my house. 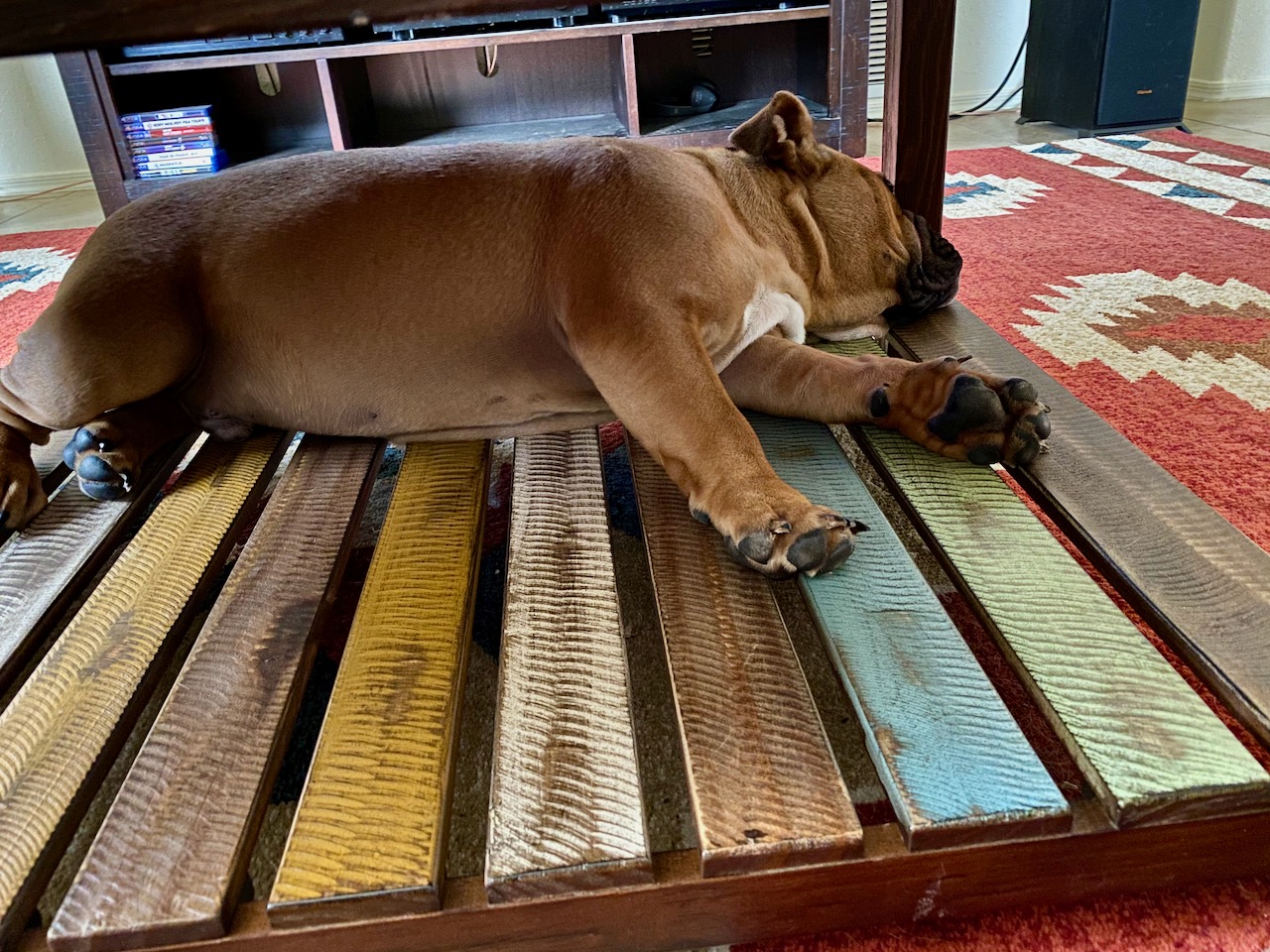 I can feel my blogging moving a little later in the day compared to the past week where I was posting something around 8pm or so Eastern time. As the weather becomes nicer I am finding a opening a little after 7pm local time, where I feel like putting something together. Look for the posts to be about this same time of night on the days I post. 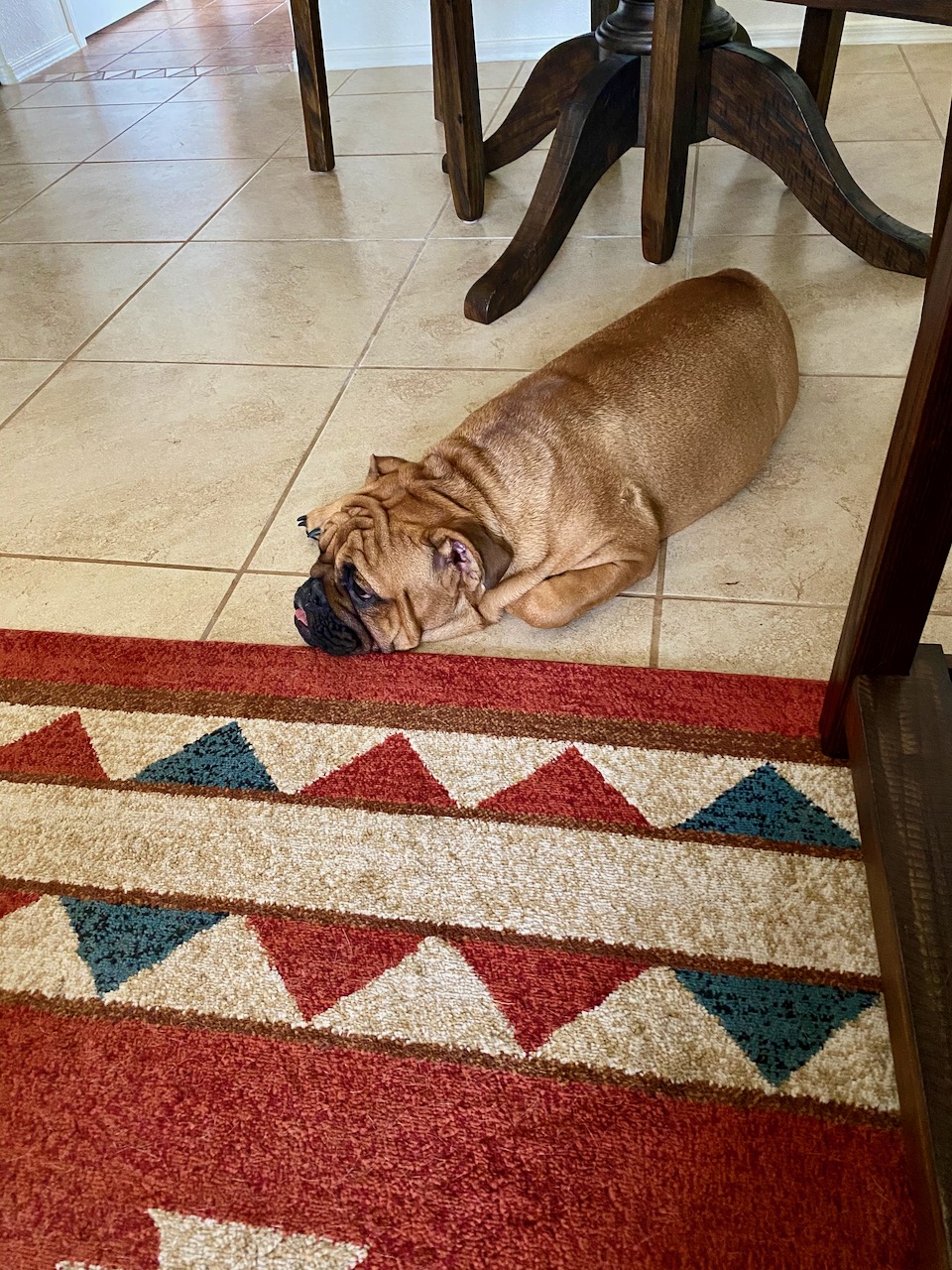 Walter is a big talker. More than any bloodhound or basset hound I've had in over 30 years. He likes to growl and bark at himself and many times when I look to see what he is barking at ... he is laying down about to go to sleep. He has learned to let Stella sleep after breakfast which means he heads to the bedroom and drags every one of his chew bones and blankets out into a pile and plays with that stack of things. He will run back and forth in the empty dog crates during this time. I can no longer keep the kitchen towel on the dishwasher handle otherwise he will drag that out to the middle of the backyard. 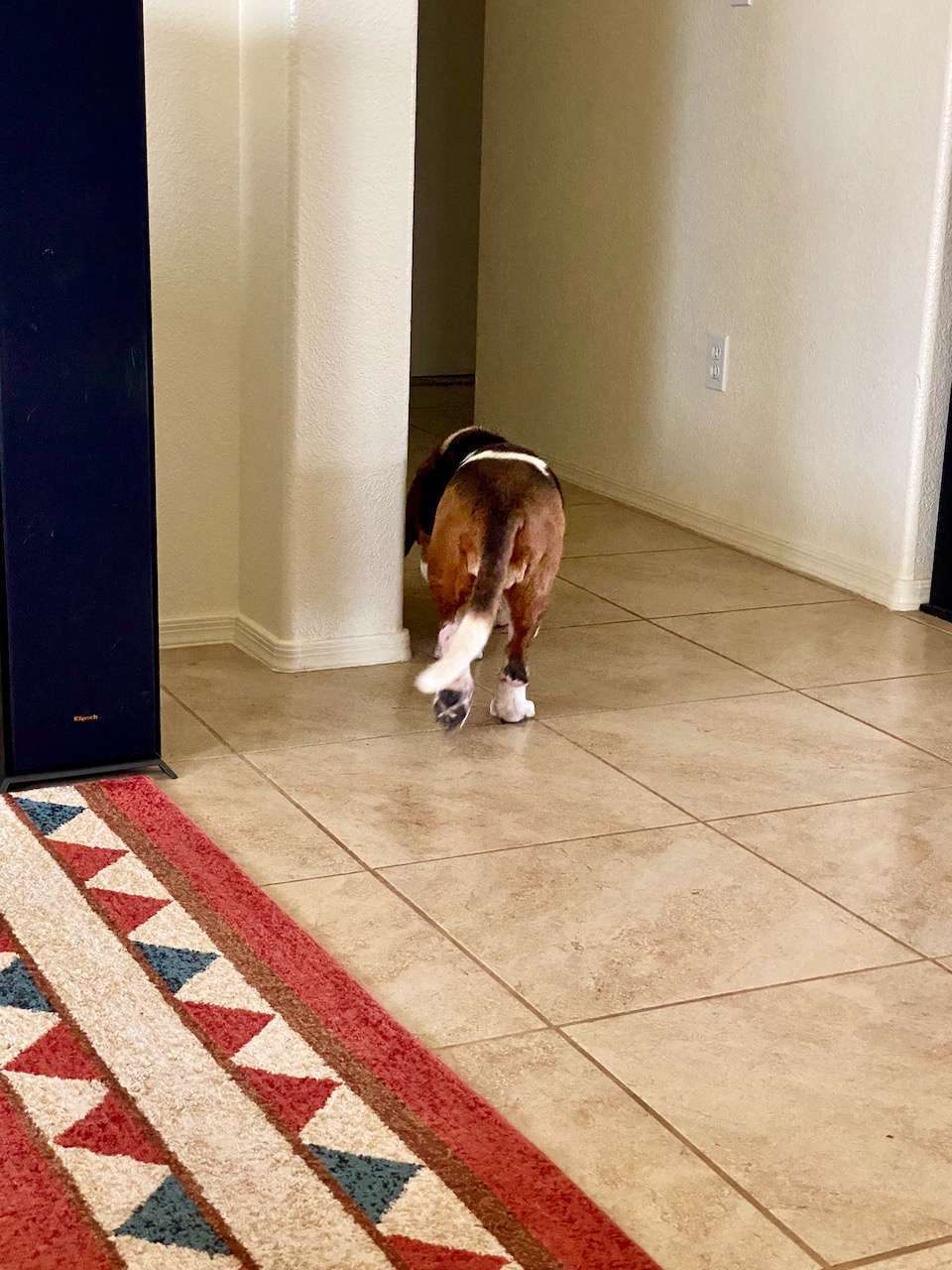 Heidi has seemed confused this week. She will make a million trips from her bed in the bedroom out to the living room, not staying long in either place before she turnes and goes back in the opposite direction she came from. If she didn't start her day barking and hopping in the air, I'd think something might be wrong with her. Appeitie is normal. 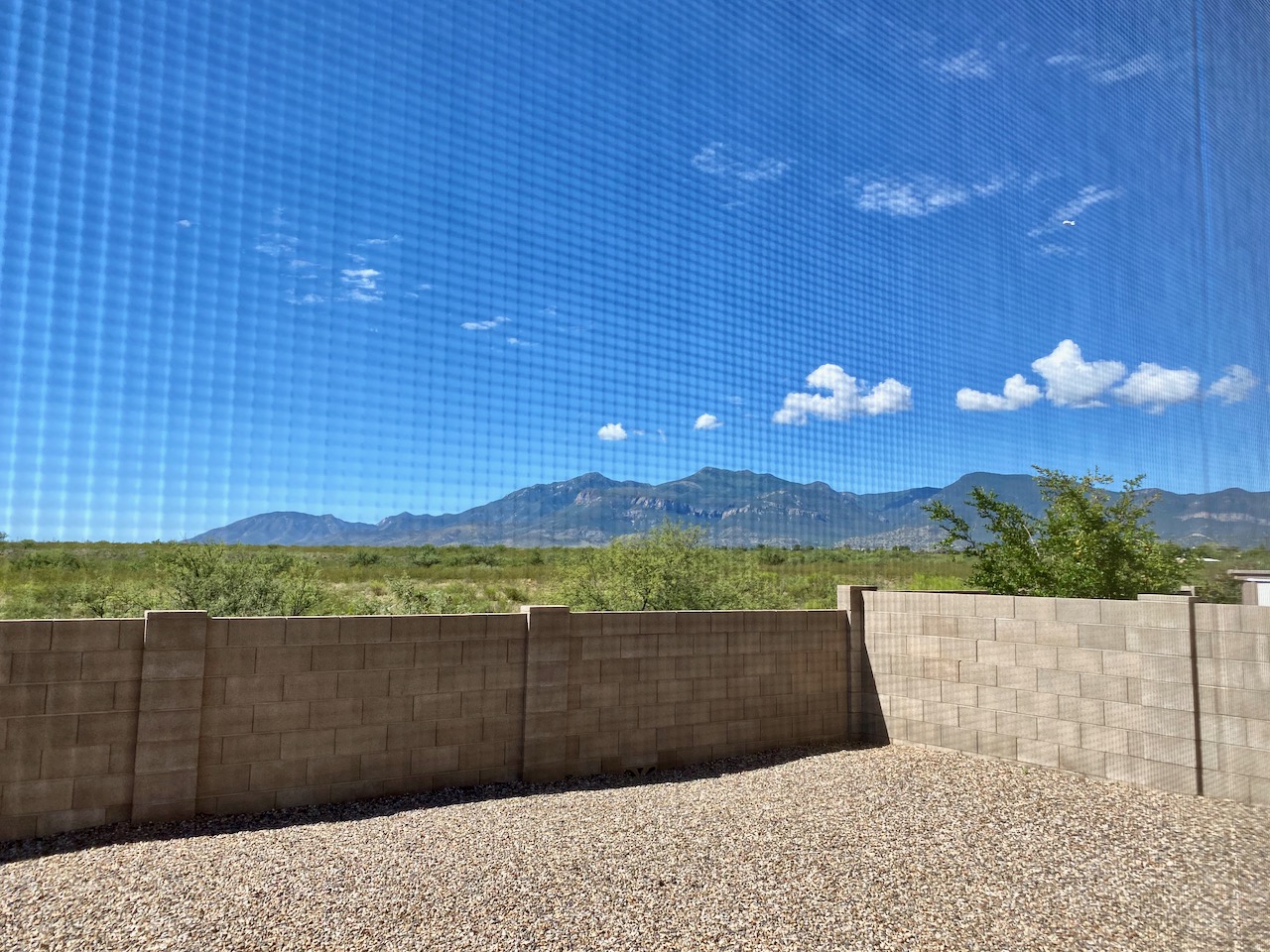 I shot this from inside the bedroom through the screen window this morning. This view never gets old. 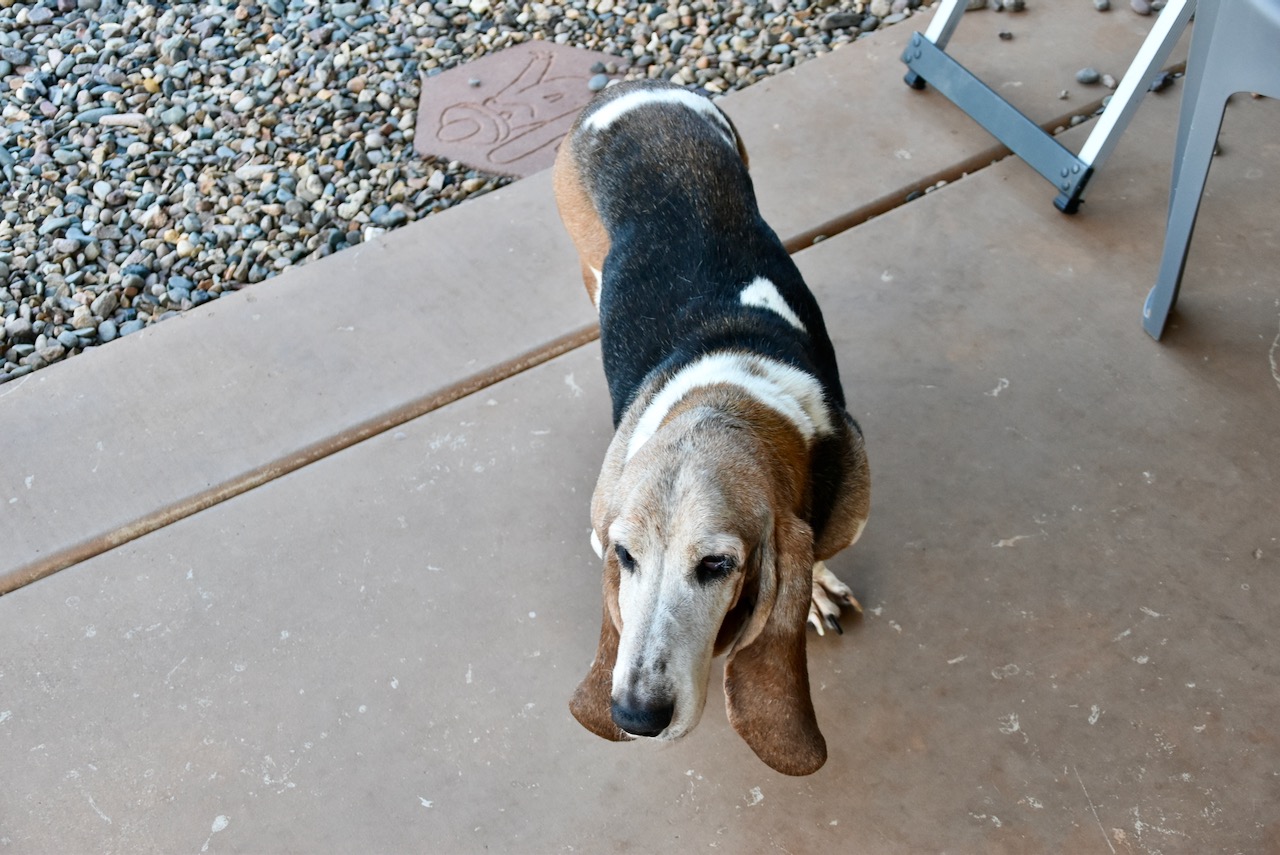 While Heidi and Walter started their day I had a text from my friend in Indiana with some computer problems. It's weird because I had a strange thing happen to my iMac yesterday that made me wonder what had snuck it's way into my hard drive. For my compouter I ran Bitdefender to check for any malware and it found nothing. I run that program weekly just to make sure. Her desktop is a Windows PC and will probably need replaced based on what she told me it was doing. She could buy it online but had to make an appointment to pick it up locally at Best Buy. 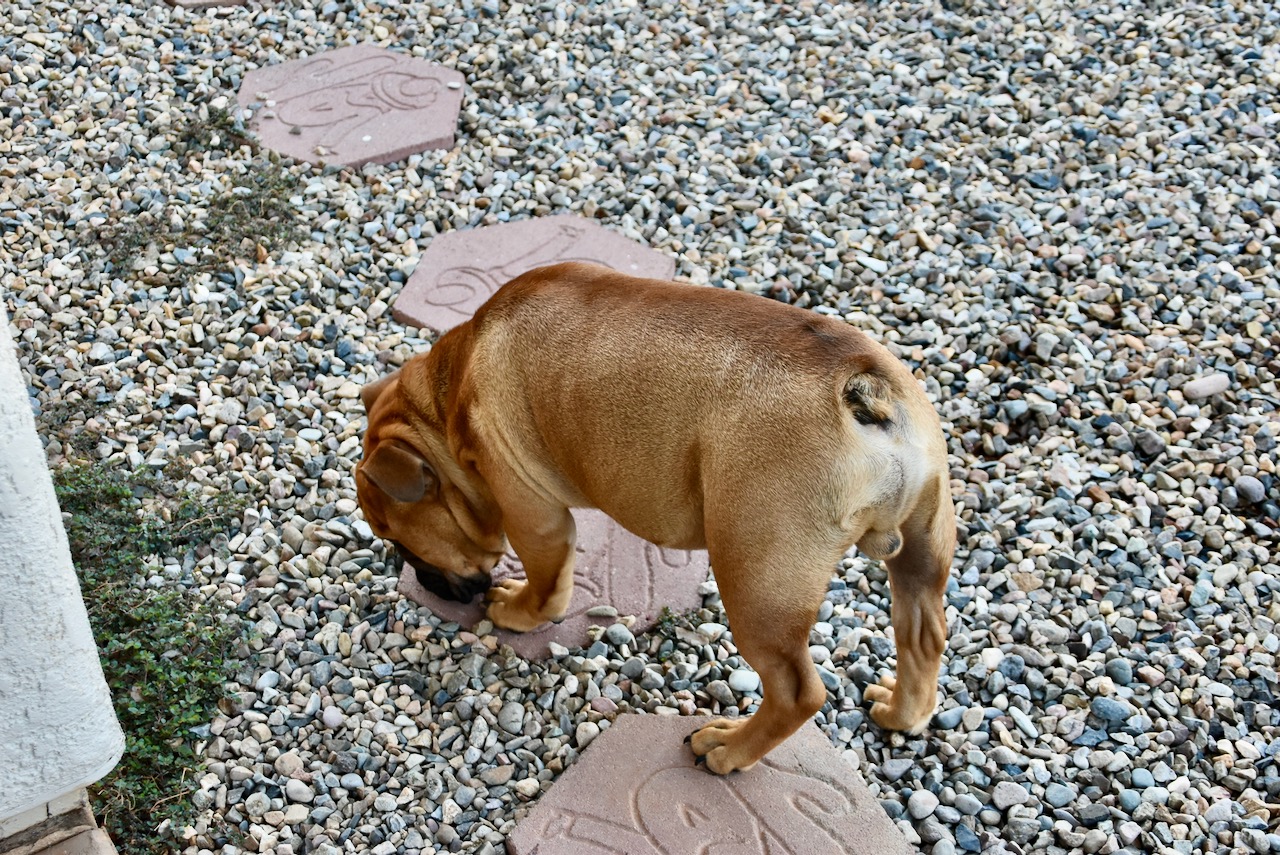 Walter still is cracking me up when he has to smell something because he will tilt his face so he can press his nose flush with whatever he might be smelling. I have noticed his right front foot is starting to turn a little outward. No signs of any kind of skin allergies so I guess he does not mind his protein being chicken. He looks very healthy. He didn't mind having his ears cleaned with baby wipes the other day. 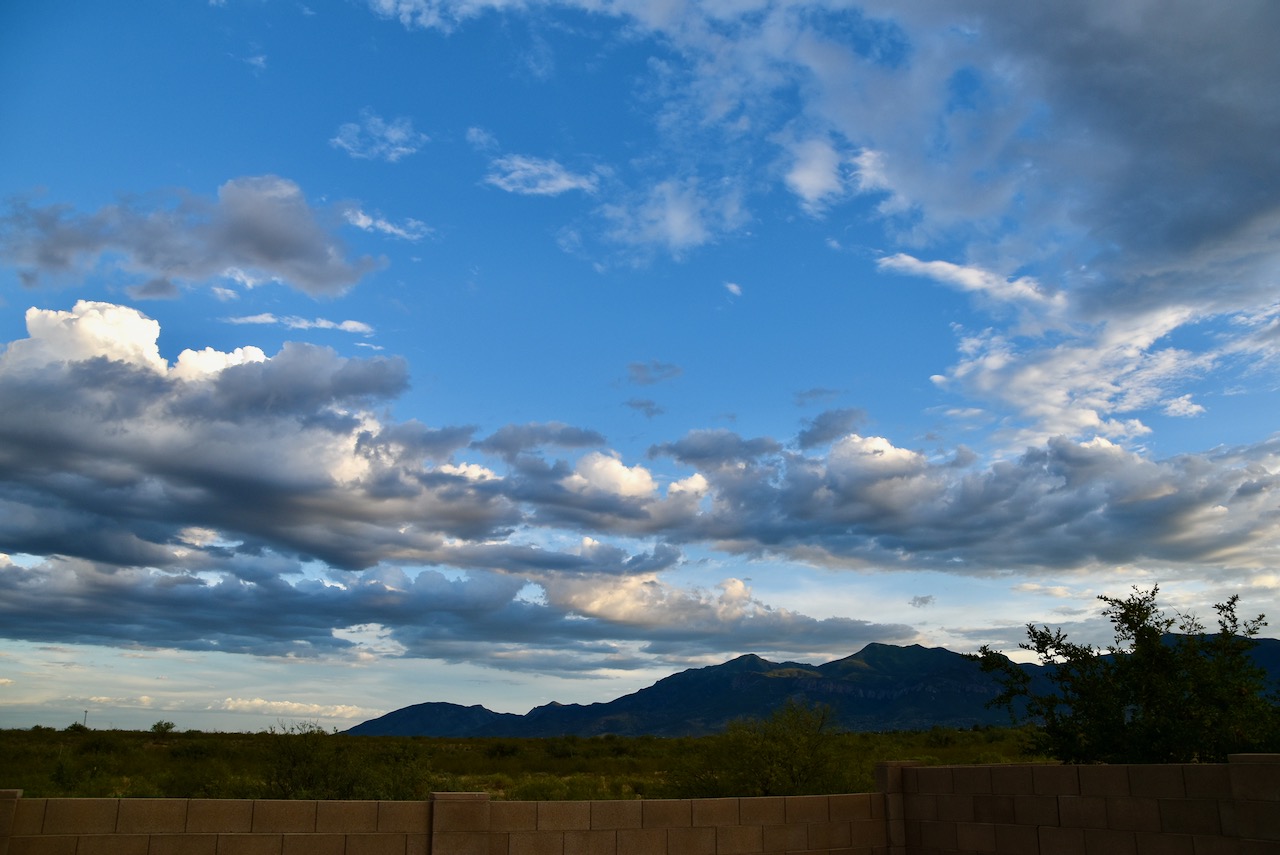 We are past the periods of rain for a while. I see nothing but sunshine icons on my iPhone weather for the next 10 days. When I say it's perfect weather, that's an accurate description. I like the hot afternoons and cool evenings where I can sleep with the window open. 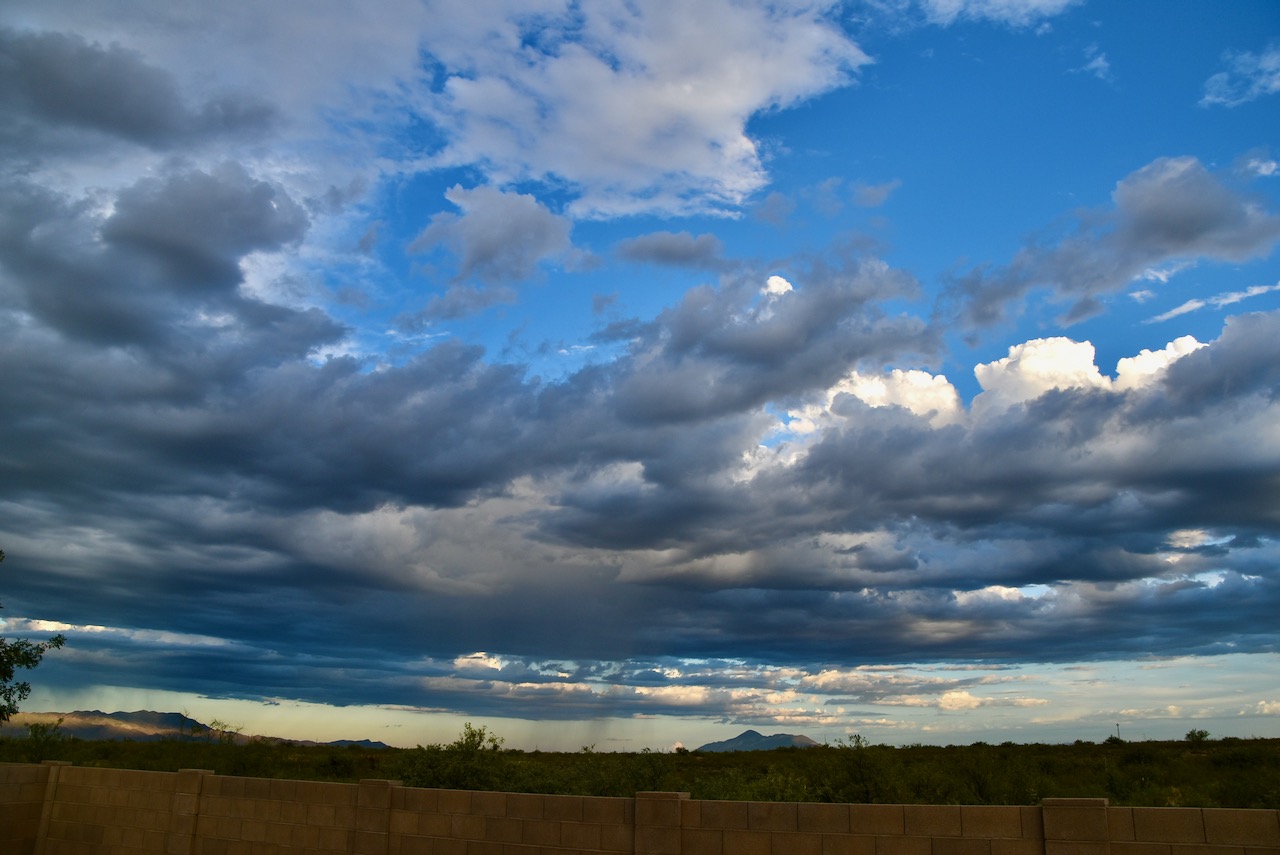 Is that a litte rain I see down on the border? ... Bisbee to the left. 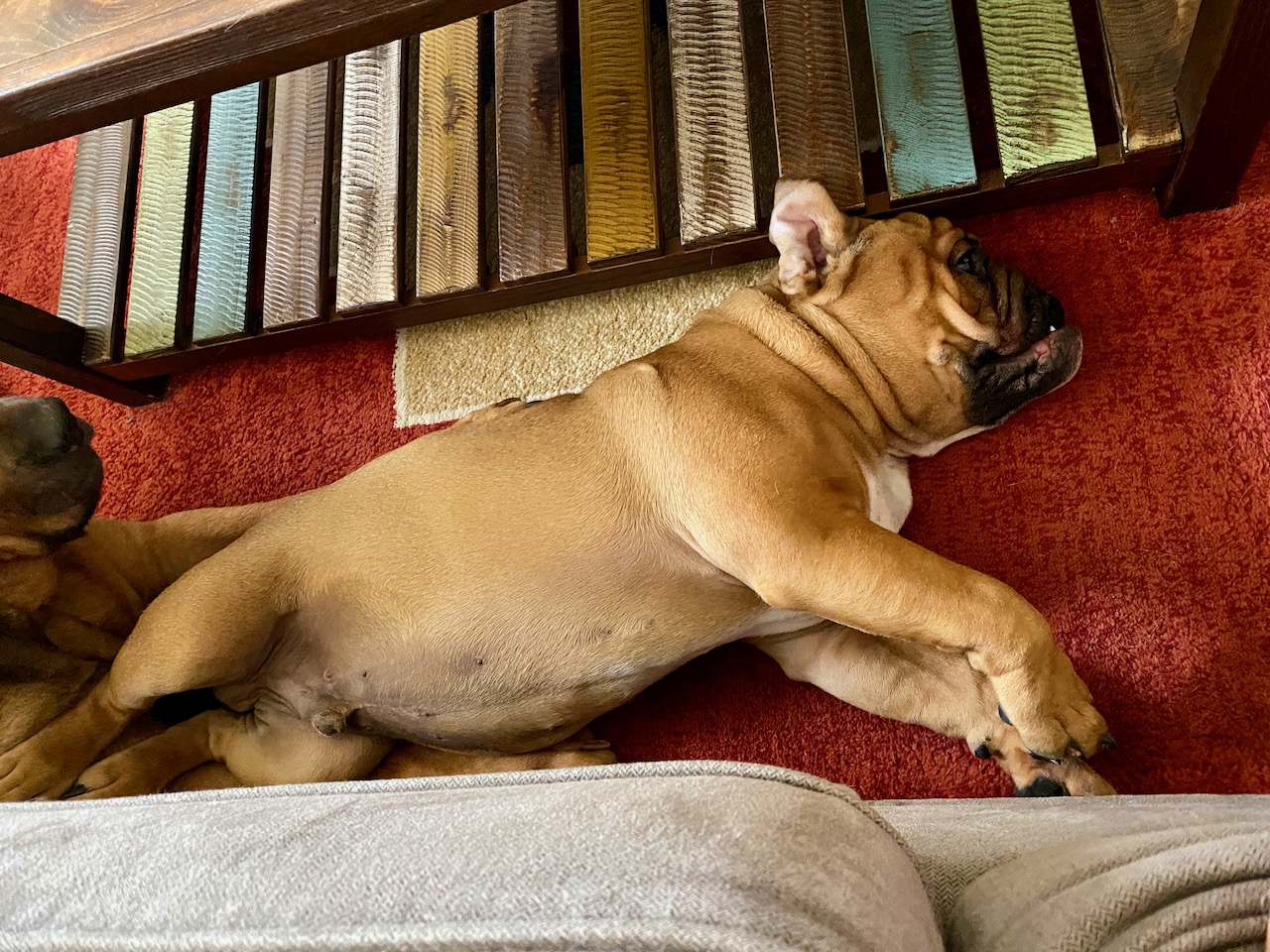 Last night after Walter and Stella had played for over any hour, wrestling with some chases from the living room to the computer room, Walter was trying to cool off. For a second I thought he was going to sleep on his back as he kept kicking Stella in the head as he tried to find the perfect spot. Once again it wasn't long after I took the picture the loud snoring began.

My friend and I finished talking about her computer problems and moved into diets. She was born a vegetarian and has been one all her life. The interesting thing is the book about Blood Type Diets says that is the correct way for her to eat based on her blood type. As I mentioned the book this morning she said she and her friend in San Diego was talking about the same book last night. A few years ago when I followed that diet I made a spreadsheet of course..

I listed in categories all the food it suggested I eat and colored the food highly recommended in blue. On the other side of the spreadsheet I listed in alphabetical order every food that I could remember buying at the store. It was a long list but I color coded the foods that give me indigestion. Then as I went through the book at that time, I greyed out those foods it told me not to eat. Guess what? It named over 90% of the foods I had already color coded that I had trouble with.

Did I need anymore proof than that?

There is no reason to shove a diet down your mouth if it gives you problems the majority of time. That does not mean I will be eating every meal at The Diner in town or at Sunny D's in Huachuca City, although I'd like to, but it does mean I can add lean beef, skinless chicken and fish back in my diet. Dairy is not a good idea for me and I can attest to that and agree with what the book says. I ate like this a few years ago and felt great with no digestion problems. I'll write about any updates I find in the next month as the way of eating goes into action. I guess I'll find out in 4 months when I have another bloodwork done and I can compare the numbers to last December.

Tomorrow morning I will be leaving early for a roadtrip of an hour and a half. It is out off the grid to a ranch that has the 10 basset hound puppies I am choosing from They will be 4 weeks old this weekend. Since its a reasonable distance I'd like to meet them in person, talk to the breeder and see what kind of reactions the two or three that I have picked out.

I might have mentioned in the past, when I did that with Sadie, I took Winston with me to see what he thought of a bloodhound puppy and what the one I had in mind thought of him. He was only 4 years old at the time. I didn't know it at the time but what I read as a good sign was not what it really meant. A professional bloodhound breeder told me a few years later why I was having problems with Sadie as a puppy.

I thought when she followed me and Winston everywhere we walked, that it was a good sign. The professional breeder told me that meant she was a tracker and would have been adopted out to search and rescue if it was her puppy. And she was a tracker as she explored that whole 7 acre field behind the house daily for the next 10 years. When I was at work, she would get bored and destroy things. She could bend those thick black wires on the largest dog crate like nothing ... I could not even bend them back with a set of pliers. When she was old enough to be left in the house, anytime I was gone over an hour I would return to a house that looked like it had been burglerized.

Another time I read things wrong looking at a young basset hound. He was always away from his littermates. I took that as 'independence' being a good thing. He would not be clinging to me all the time for attention. Little did I know that it meant for the next 13 years he would wander miles away before someone would call me and say that Harry was in their house sleeping. He would bark at the door until the strangers would let him in. LOL Luckily his dog tag was still attached with his name and my phone number.

The Out West Bassets breeder has told all ten of us that she will be able to tell us the puppy's  temperaments and personalities this week. Hard to believe there could be that much difference between littermates but there is. I'll post about my trip with some photos tomorrow.

My zip code is showing the number of active positive COVID cases has decreased a lot the past one to two weeks. We are back down to 47 active cases where it was 81 just a few weeks ago. The mask mandate must be working and at the same time there have been "testing blitzes" for an increase in tests done.