A Day Of Rain 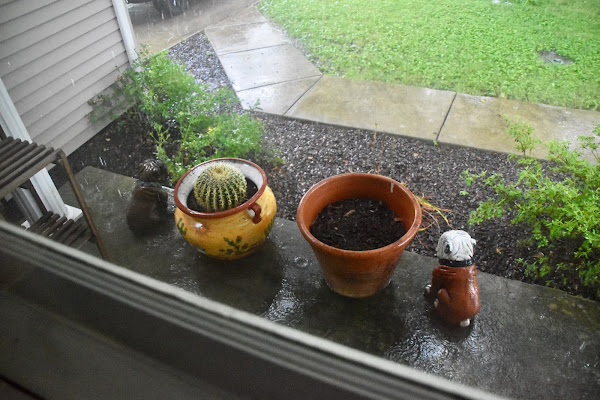 Sometimes the weather forecast is right and it was today. Looking at the "hourly" and it showed percentages 80 and above, with a few at 100. It arrived a little later than planned so the hounds and the dog were able to get outside for some quick relief this morning. I see some photos on Facebook from friends out in Sierra Vista that the monsoon is here but so far I see photos of clouds but hear nothing about it raining. They need the rain a lot worse than we do here. 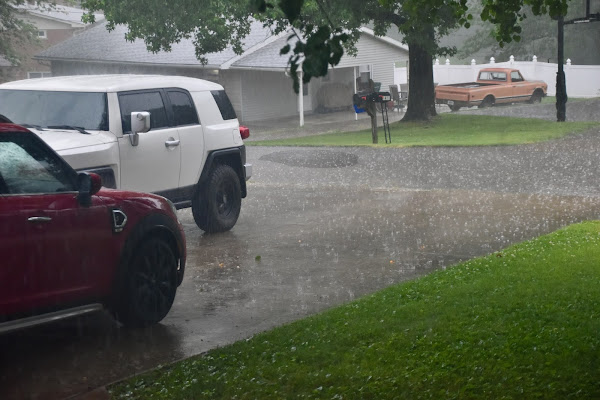 As you can see it is coming down pretty hard and that later changed to a solid rain, not as hard for hours and hours. 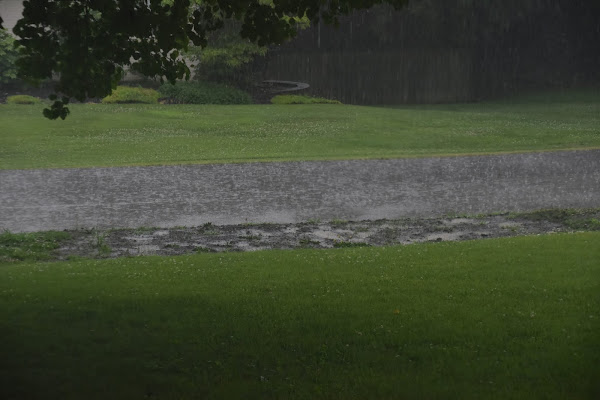 For some reason 1/3 of the area that I put down top soil and grass seed has grown a lot better than the other 2/3's. Some think the large tree shades it a little but that photo faces east. It looks like I will have to add a little more top soil this week after I rake it level. The rain stops tonight so a few days of sunshine will dry out all of that mud. 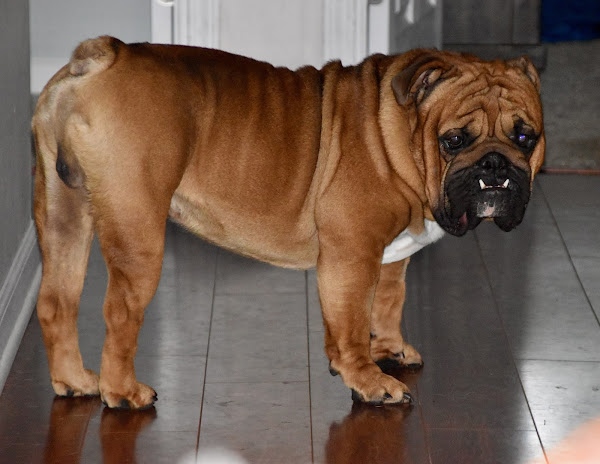 Walter is a true Arizona dog ... he does not like the rain at all ... not even a wet patio from the rain during the night. I shot this a long way off as he was headed back to sleep under the open window and under the ceiling fan. 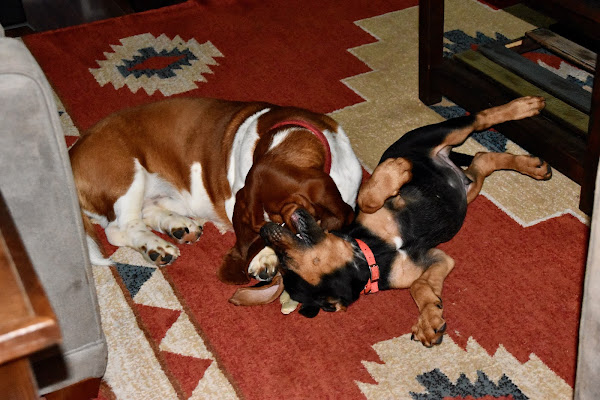 The rain did not and does not bother the hounds. They just moved their play area from the backyard into the living room. Watson even went outside in heavy rain to pee, which was a surprise. With the temps dropping into the low 70s I gave my AC unit a day off, opened the windows and turned on the ceiling fans. I like here the rain as long as it is not blowing inside the windows. The birds were out in force with it changed from heavy rain to a light rain. The open windows lasted until mid-afternoon after the rain stopped and the humidity kicked in. 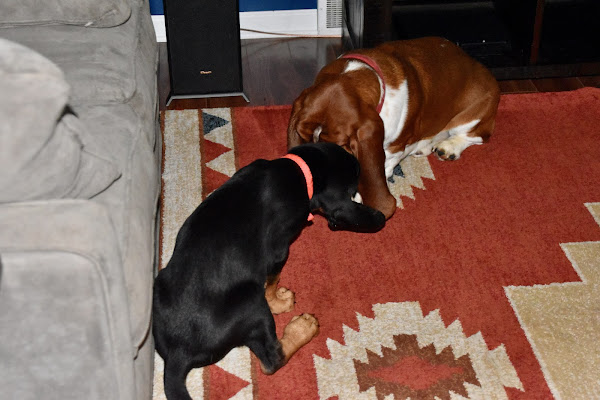 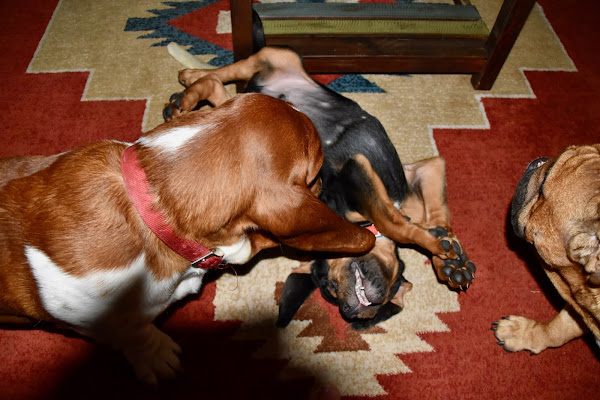 As of today Watson has been here two weeks which will make him 10 weeks old on Monday. It is toenail day for him. When I went over to see which pup I wanted, the breeder sat there with him on his lap while he cut the tips off. I was able to cut the tips off last Thursday and will do that again today. So far so good because Watson does not try to get away. 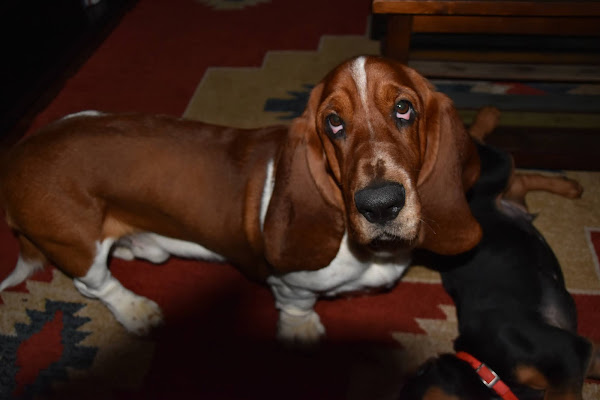 Some different photo views since I was using the flash inside. I like how this one only focuses on his face. 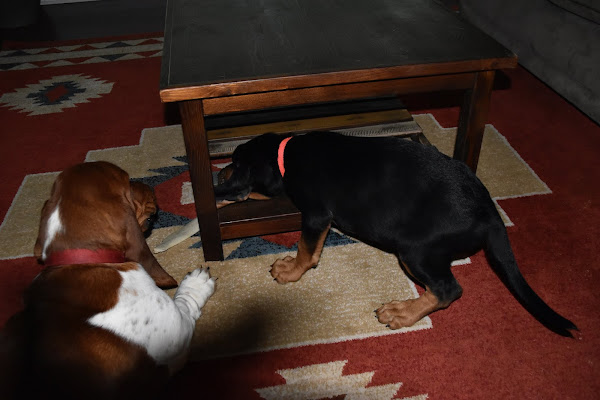 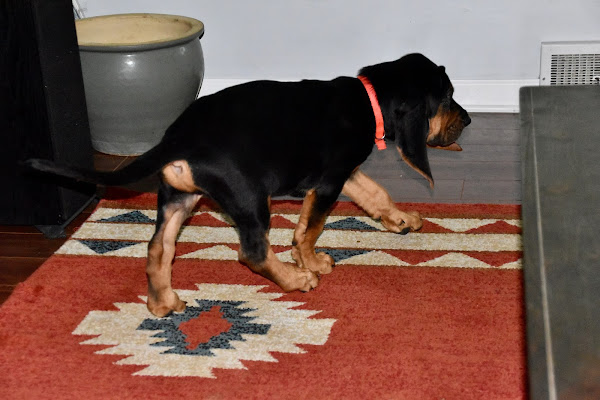 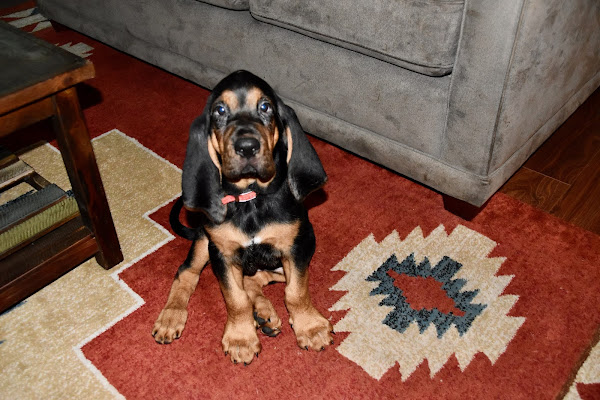 I must admit that Watson has been quite a surprise in his demeanor and house training. They did a great job teaching him the feeling of grass under his feet before he pees. He will whine if I am not paying attention to let him outside. A few times I have caught him sitting at the patio door wanting out. 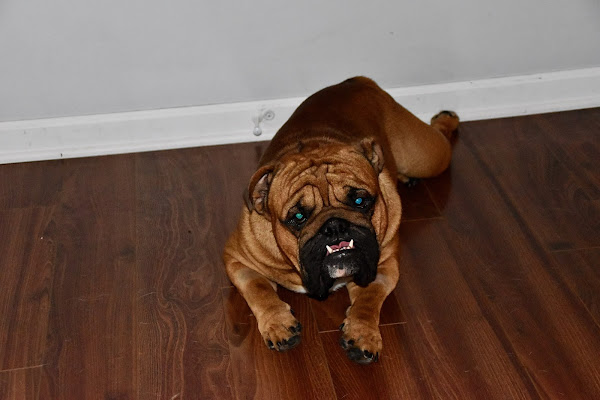 It took a lot of coaxing but Walter finally decided to join us in the living room this morning while it was still raining outside. Hours later it was still raining very very lightly. I wanted to take down the curtains by the patio door to see if I liked that better. I am not a real curtain person and prefer just blinds if I need some window covering. Well as usual that led to another project that moved me from room to room. After I took down the curtain rods and liked the look enough to know I was not going to put them back up, I had to fill the holes the screws left.
The prior owner had a lot of photos or things mounted on the wall because there were a lot of screw holes to fill and paint over or find something to hang on the wall with the screws already mounted. I like minimum number of photos on a wall, so the screws came out, the holes were filled and painted over. I have plans to paint the living room one color without an accent wall and the computer room. So at least I have a little head start.
By 4pm I glanced outside and saw sunshine for the first time today. I let the hounds and the dog sleep instead of having them go outside disguised as a bathroom break when it would have been a blog photo op.
Here is how their afternoon progressed. 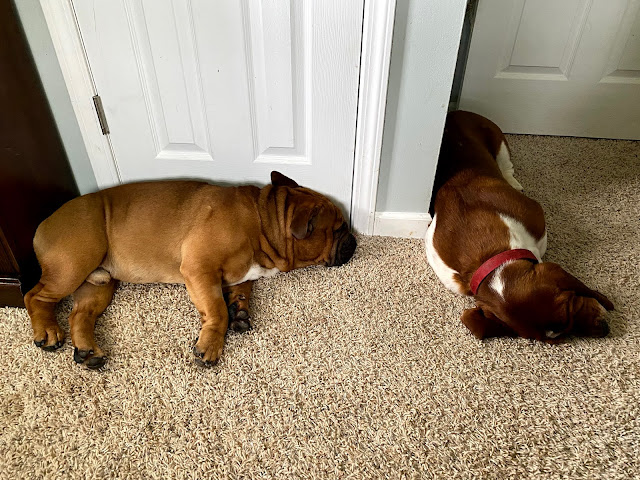 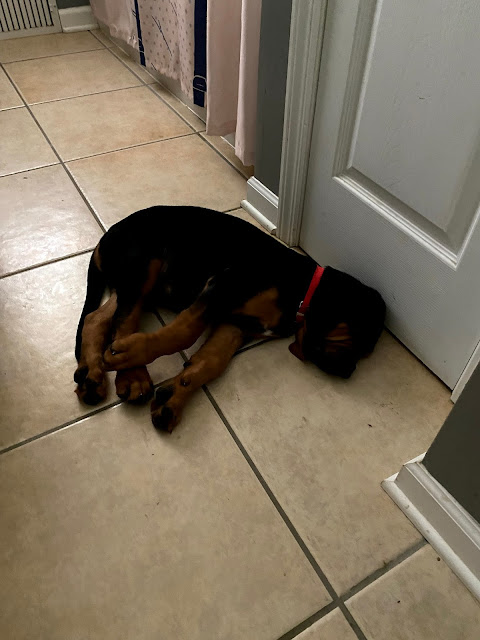 It looks like we have five days in a row of bright sunshine. That will dry out the yard enough by tomorrow for me to mow it and I should see a lot of new grass coming up out front after some natural water and sun. I am anxious to get that piece of yard next to the road filled in with green grass, some clover and a dandelion or two. The iced tea was tasting just as good today as it was yesterday.
Things are good here in "the tropics" of Southern Indiana.
at July 01, 2021
Email ThisBlogThis!Share to TwitterShare to FacebookShare to Pinterest
Labels: Bulldog Sleeping, Hounds Playing, Indiana Rain