I Have A Digger 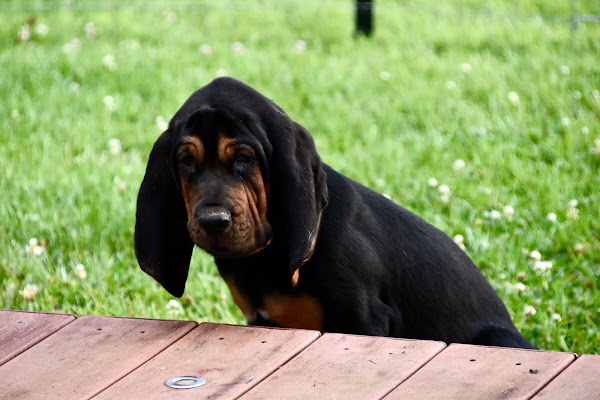 Luckily the other two puppies have grown to where they are a year or older. Still puppies but out of that real puppy stage. Watson is having fun exploring and finding new things to torment me with and is responding well when he hears the word "No". When I took this photo I noticed some dirt on his nose. I had found my digger, exactly who I expected it to be. Luckily he was not digging to get out of the fenced area but something he found in the corner of the yard by the house. 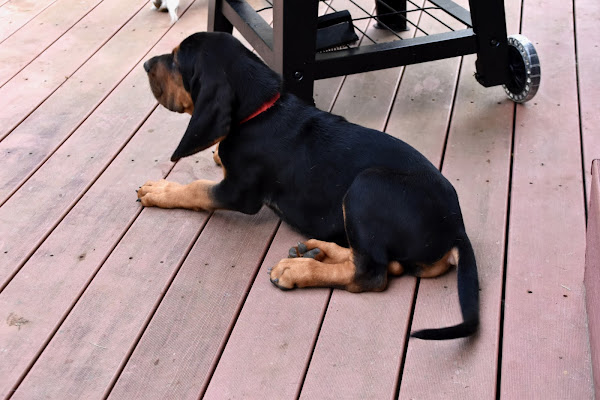 One thing I really like about him is that he will sit or lay by himself and just observe his surroundings. He does not seem to be hyper, has a great nose and is fairly independent.
For the past two weeks, whenever I leave the house I let Water and Henry have the run of the house. So far so good. I was gone to the baseball game for almost 5 hours last night and when I got home they were asleep in their spots in the bedroom. During the day when I leave there is evidence they both stay next to the crate that Watson is in. 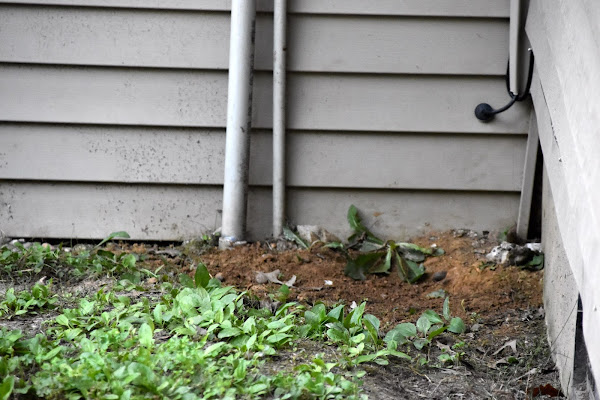 Maybe he was just trying to dig out that weed so he could eat it. 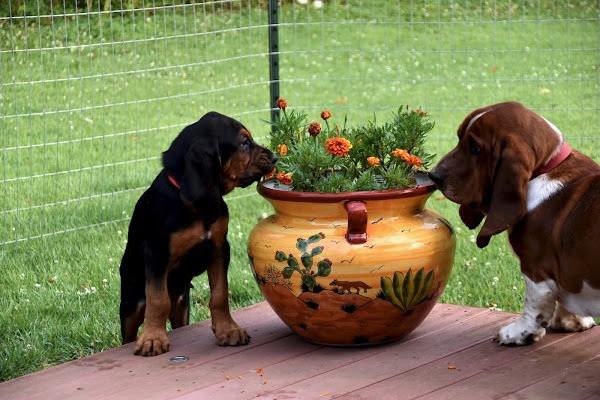 Whereas eating my magnolias are much easier to do ... 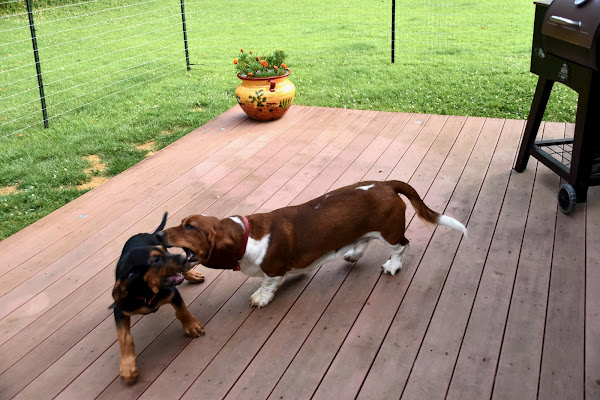 These two are enjoying their new freedom off leash and/or tether even in the smaller space. I did catch them looking out toward the bigger part of the yard yesterday probably wondering what put them in dog jail. 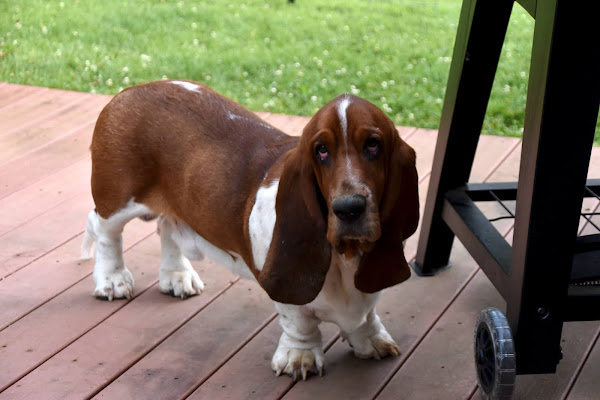 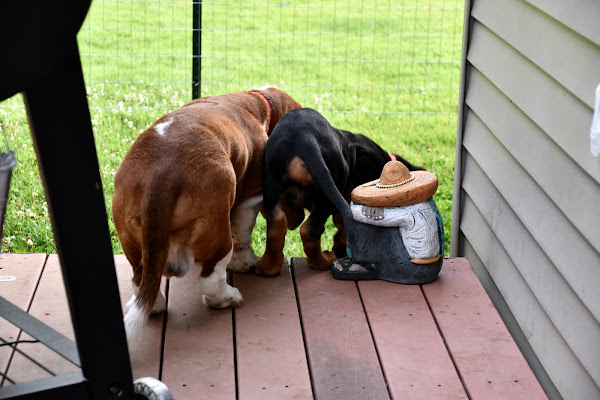 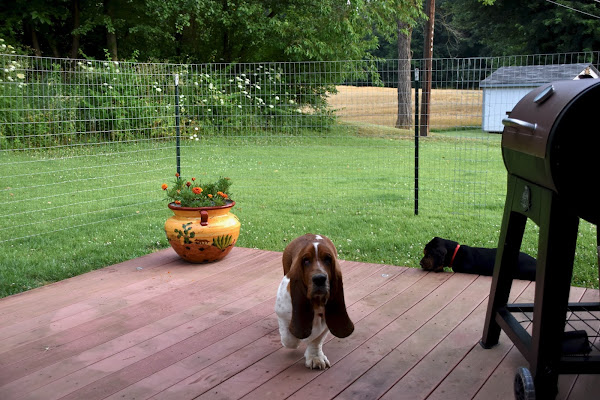 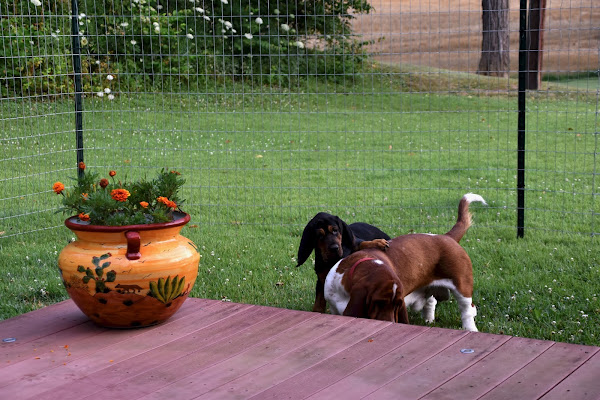 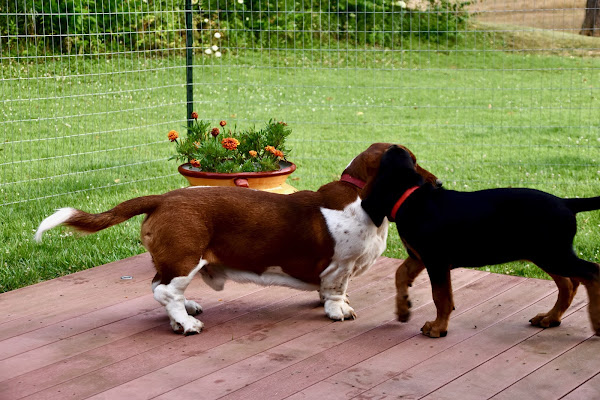 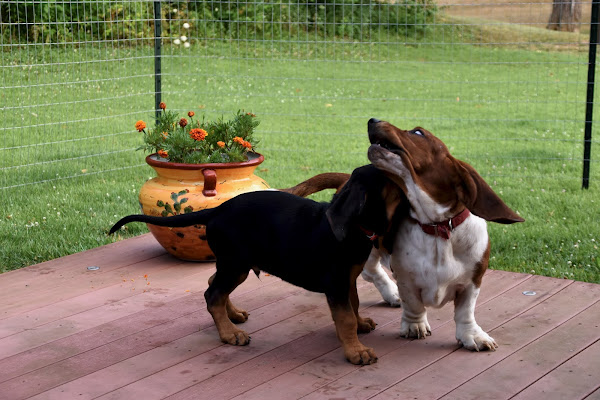 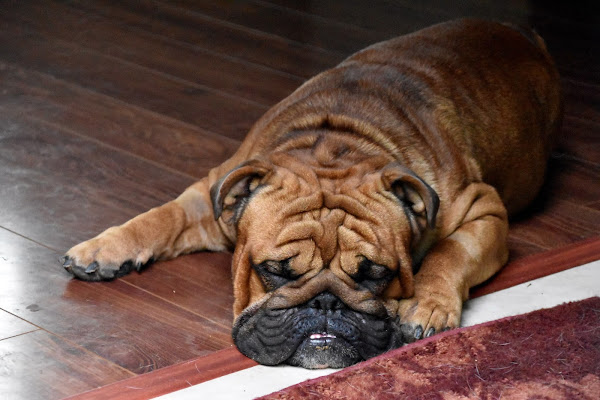 Of course Walter doesn't care. He does enjoy the early morning open patio door to sleep with the cool breeze while it lasts. It was not long before everything was shut up and the AC kicked on. He gets his stitches out early tomorrow morning while Henry gets his first annual checkup and an adult rabies shot. 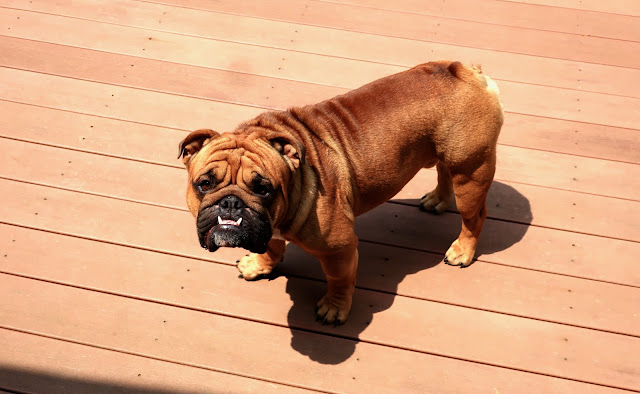 We attempted to sit outside today. 6° makes a lot of difference when it's cooler but a little before 3pm the dark gray clouds rolled, sounds of thunder in the distance (did not bother Watson) and the winds picked up bringing rain. This will be good for the new grass seed I planted out front. I did something a little bit different this time on the area that was not growing as fast as that shaded by the big tree. After spreading the seed I raked the dirt to mix it in and put the seed a little under the dirt. I will see if that makes a difference.
I appreciate the comments made on the last post about ideas on property privacy. I think a nice row of evergreens, that will stay green year round, would look nice on each side of the back yard. That would be outside my black aluminum fence. Based on property lines, that berm is mine. I am not sure if that was put in my previous owners or not nor the reason. All the neighbors have mowed yards right up to the wheat field.
The property diagram I was given by my friends who had the neighborhood layout printed by the local department of health, shows dates the property changed owners. Quite a mystery but one that is consistent with what I saw on the history of the house when it was listed on Zillow. In the past 10 years I will be the 5th owner. Seems like a lot to me but the neighbor filled me in with previous owners in that time period. The majority had families that outgrew the house. A couple moved out of the state taking different jobs.
What is interesting, based on the handwritten dates for this property, between the years 1958 to 1994 there were 11 owner transfers. That is an average of a little over one new owner every three years. In the past ten years it is an average of around every two years. Some may ask, as I did, maybe those dates are not new owners. My friend that gave me a copy of hers told me she did more history digging on her property around the corner and the dates and number of previous owners were accurate for her property.
The houses on each side of me are accurate since they only list the date the first owner bought the new house build on that property, in 1957 and 1958 which matches what each neighbor told me when I was introduced to them. There have been no other owners besides their parents.
Being the curious type I keep wondering over all those years even with a gap of missing data from 1994 to 2010, there are still 16 different owners of this property. Why? Was it something more than just new jobs and growing families?
That storm that blew through took out power long enough to knock out my internet connection. The lights flickered and then went off as did the AC. Turning things back on I could not connect to the internet. Luckily when that happened last time I put the sequence the technician told me when he got me back online. That worked so I did not have to call technical support. I have a feeling being in this storm "ally" it will be a common occurrence at this location.
The hounds and the dog are asleep for their late afternoon siesta, so that will be about all for today.
It was another good day in "the tropics" of Southern Indiana.
at July 08, 2021
Email ThisBlogThis!Share to TwitterShare to FacebookShare to Pinterest
Labels: Magnolias, Property Questions, Watson's A Digger