A Day Of Surprises 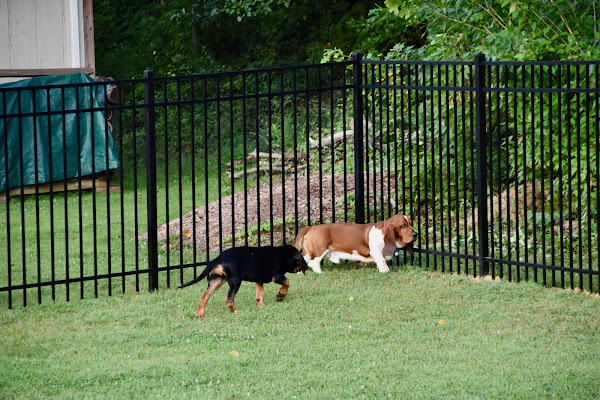 Well it's been quit a day and it's only 4:33pm as I start this post. Henry continued his hunger strike this morning by refusing to eat. I have played that game before with other hounds and I wait them out. I found out this afternoon he no longer wanted to eat alone in the bedroom with the door closed. He chose that a month or so ago. He wanted to eat where all the hounds and the dog USE TO eat when life was simple. But Watson LOVES FOOD, goes crazy and will sprint to Walter's and Henry's food dish after he is finished to see if they have finished their meal. So they eat alone behind closed doors.
"When life was simple" is a key part of this post. I only wish. 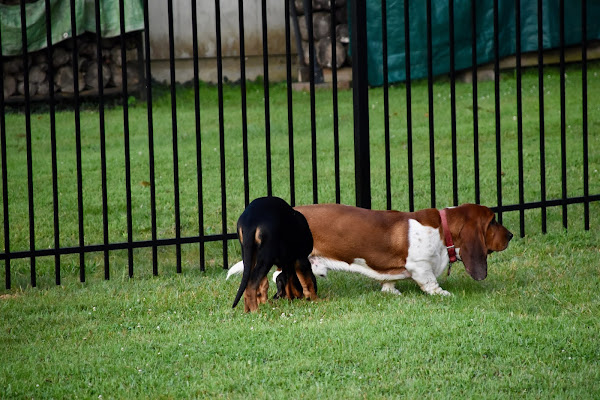 When I heard the house too quiet this morning around 6:30am while finishing my last cup (2nd) of coffee, I walk to the patio expecting to see chewed end pieces to the patio deck scattered everywhere. The deck was clean and I was very happy when I did not see those pieces in the yard. Henry and Watson were exploring the fence line for any overnight smells the skunks, squirrels, rabbits, ground hogs or snakes may have left. I have been told we have all of those in the area.
So I was feeling pretty good about today's possibilities. The Reds beat the Cubs last night so that was good. They made some trades today so that is good but another terrible night of sleep with the strangest dreams I can ever remember. I woke up tired again. 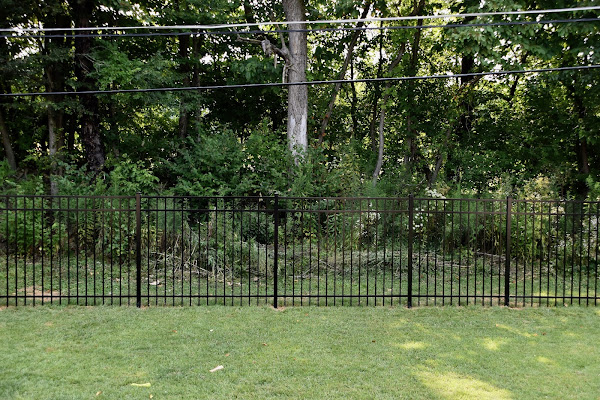 My plan was to start early this morning, before the temps hit the 90's. The brush was hanging over that mowed grass and at the far left corner some branches were touching the power lines. I was told that two house owners ago, the berm was bush hogged, and trees were cut to ground level and mulched. That is the pile of mulch on the far left corner. Well I have 21 years experience on stuff like this overgrown brush and I still don't know what to do. But I knew this morning at the minimum I was taking my tree pruners and cutting back some saplings that were growing too fast as well as some weeds away from my grass path between the berm and the fence. 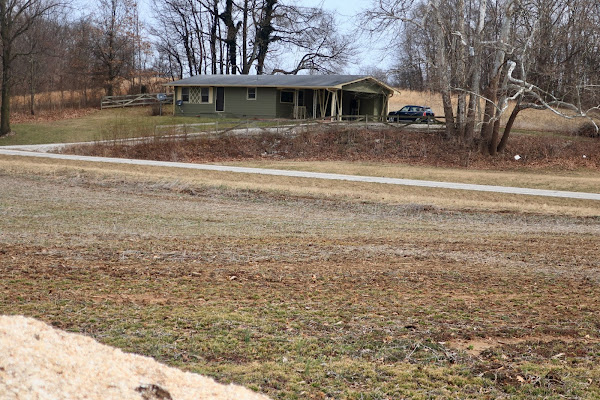 At the old house up north I use to fight that 80' of bank every spring. It use to be loaded with large Sycamore trees like the two left standing. Straight line winds in June 2008 pulled those trees out of the ground like weeds and laid them across the front yard parallel to the house. Right next to the large Poplar and Maple tree that was about 10' in front of the house.
Back to that bank. Today I saw the same signs as I use to see there. In the past one trunk had been cut to the ground only to have 4-5 small saplings grow back from that trunk. I tried burning that bank to the ground but it grew back even thicker the following year. Here at this house burning is not an option with the wheat field right on the other side of the berm, then houses on the other side of the field. Bush hogging possibly with a company hauling away the limbs and brush are probably my best option. Even if I cut everything myself where do I put the excess limbs. Before I would stack them in a burn pile and have a huge bonfire in the fall. Not here. 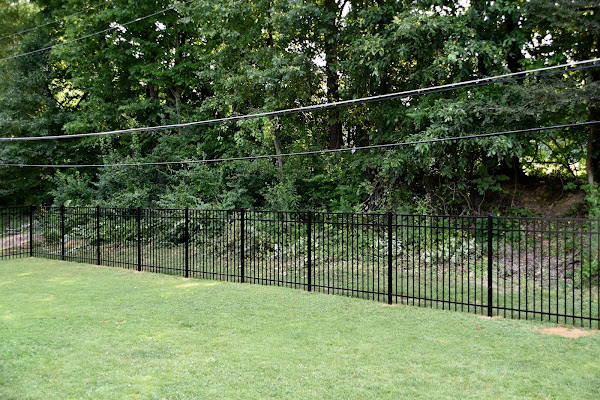 At least I cleared out along the line of the berm where I mow. My neighbor tells me they cut theirs back every fall but didn't say where they put the cut limbs. All the leaves they have in the fall are raked and put on a compost pile. I will mow and mulch mine. I have a gut feeling I will have more leaves here than I did in the old house up north.
This is when things get out of control.
I was at that far left corner cutting back tree limbs when I hear some growling between Henry and Watson over the two new bones I bought THIS MORNING. The bones would last longer than 54 minutes of the chewable bones Henry ate yesterday. I know that Henry has issues thinking all bones are his but in the past all he has done is growl. Both hounds were spread out in the backyard chewing on their own bones while I worked on the other side of the fence. 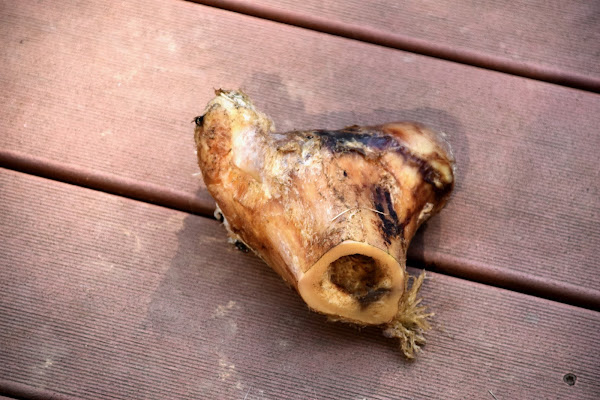 Walter??? He isn't stupid. He is inside where the AC is already running early this morning because the humidity was 88% at 7am. Plus he is not really a bone chewer. This bone is what caused doggie WW III and it was ugly. Due to my hip replacement in September 2019 I am not suppose to run, doc's orders. I am on the far left corner of the lot, outside the fence and the hounds are on my end of the yard. The only unlocked gate is on the far side on the other side of the yard.
The growling had turned into an all out dog fight and Watson sounded like he was fighting for his life. Henry had gone into the full attack mode as I moved as fast as I could down the backside of the fence around the corner to the gate, then across the yard to break them up .... yelling all the way.
I had no doubt by the way it sounded that Watson was going to be injured and I was pissed off to the max. What had happened, Henry wanted the bone Watson was chewing. I heard Watson growl back and attacked Henry first, the fight was on and Henry was fighting to win. I see now why I use to have three FEMALE hounds and not two MALE hounds. In fact it has only happened a couple of times with Winston. Not the fights but having more than one male hound in 34 years.
Watson was not injured. In fact once I got Henry away from him, he stood up wagged his tail and went back to chewing that huge bone. Henry and I headed for the house. I was happy I was going back to work on the berm instead of taking Watson to the vet for emergency service. Walter?  Sat and watched, never got excited and went back to sleep in his air conditioned computer room. 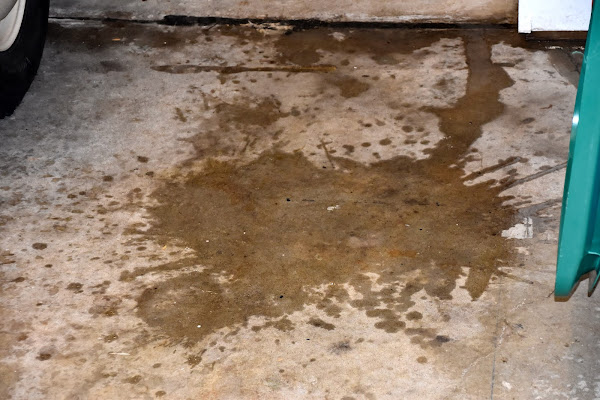 BEFORE that excitement that took place around 9:30am, I had walked out to the kitchen to get my second cup of coffee when my bare feet is hitting puddled water. Not dog pee but water. I thought Watson must have done what I have seen him do to water and food dishes ... put his foot on the edge of the bowl and turn it over. NOT a great way to start the day. I filled up the large 3qt bowl that was in the garage in case he did it again.
He did but I didn't see what he did. This afternoon I fill up the bowl again and sit it in the garage where it is there all the time because all of my hounds and the dog do not wipe their jowls or chin after they drink and water drips everywhere. So the garage is a good place to keep the water bowl. This afternoon I sat the bowl down, peeked around the corner out of sight to watch what Watson would do.
He was burying his head in the water bowl and shaking it. 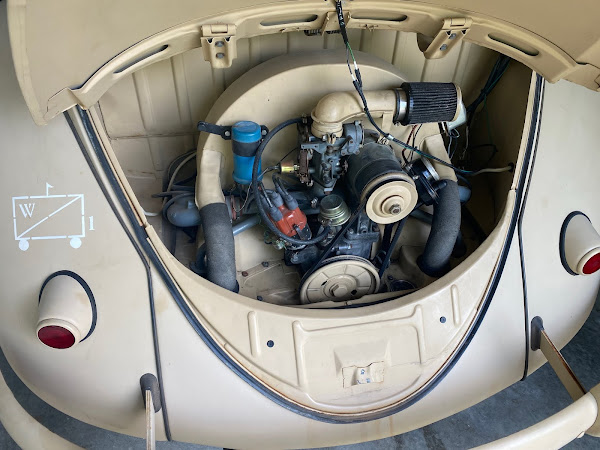 The fun doesn't stop there. On Monday I decided to take the 1957 VW bug to the dog food place to buy bones. It had not been driven in a while so I was letting it warm up but it would not idle without me pumping the accelerator. Once I lifted my foot off the pedal thinking it was warm enough to idle on its own ... it stalled out. The engine turns over but will not start. Much like the 1960 Truck did the second day I had it but that as operator error. Only this car does not have the lever for a fuel reserve tank like the truck has.
This bug was rebuilt from the ground up as a tribute to the German WWII 82E bug they used in the war, with some personal touches. The engine and components have around 2,500 miles on them so they are fairly new. It should be an easy fix because a VW only needs fuel, air and electric to run. But I am not a mechanic. I have worked on every VW I have owned since the 1960's with some gaps of non-ownership scattered throughout that time. It might take some time but I usually get them running again. 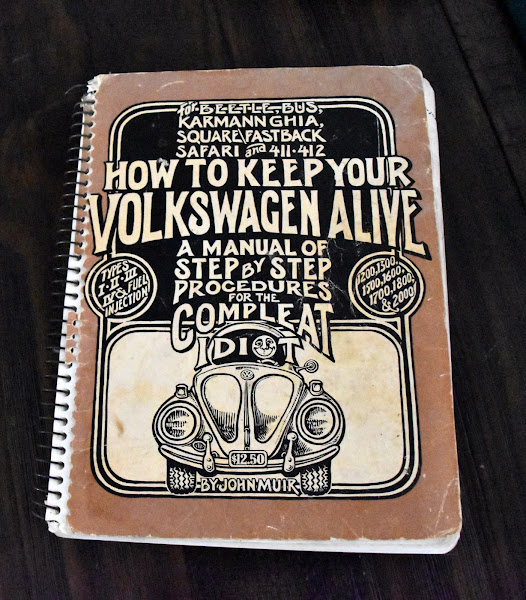 Usually the first place I go for any VW mechanical issue is this book that was written back in the early 1970's. Believe me, it will lead someone like you and I every step of the way to diagnose, and fix the VW that is having issues. The book is that good. For added information or help I also go to thesamba.com forum where I can get help from the experts in old VW repair.
With the hounds, the yard, the berm and hot weather ... I have not had a chance to get back to the '57 VW to check out some suggestions to see if I can get it running again. The big thing is, the last known VW shop that I know of in this city had to close due to the owner's health issues. So I will have to search on Facebook or the internet for some local VW garages IF I cannot get this VW started. There might not be any even with a VW dealership here in town. 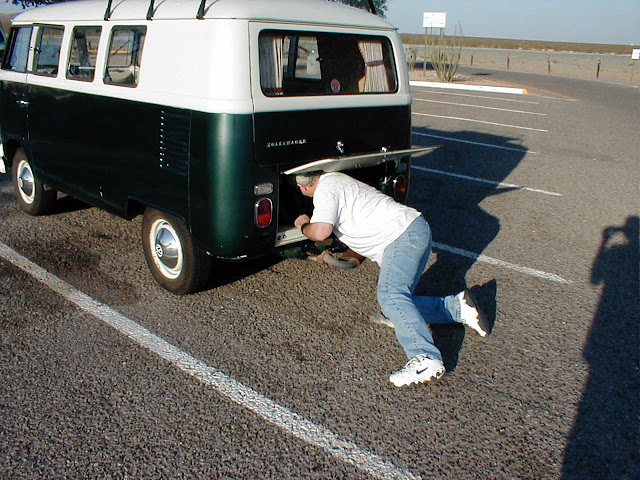 As you see, this is not the first time I have had to look in the engine compartment of a VW. This is in July 2003 early morning at the Rest Area right on the Arizona - New Mexico State line heading east. This was my first online buy on eBay ... A 1967 VW bus. I got it running and of course in July on I-25 it is hotter than hell at 10am. A few miles north of Truth Or Consequences NM it blew it's engine and we were done. Long story that I have mentioned here before years ago. Everything worked out then as it will now. Hounds, dog or VWs.  HaHa
The hounds and the dog helped me out with some photos by the time I finished this post. They needed to go outside for some water. I have a large bowl of clean water in the shade outside. So here are some hound photos from this afternoon. 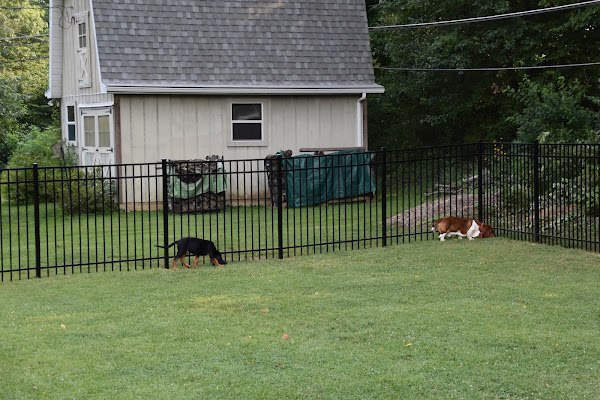 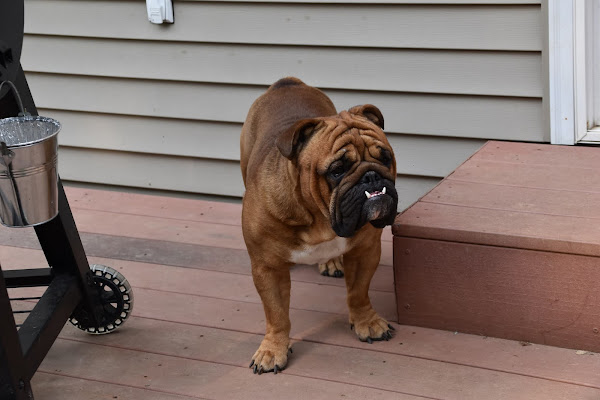 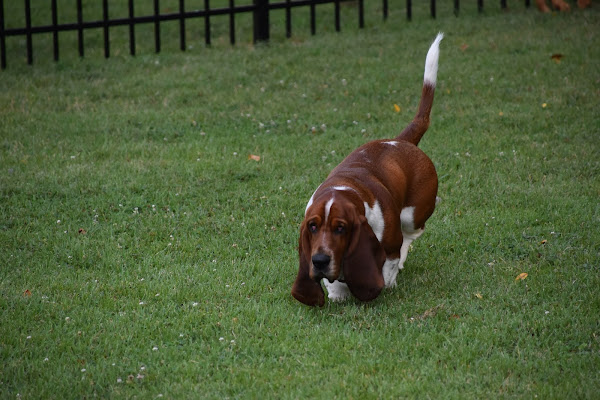 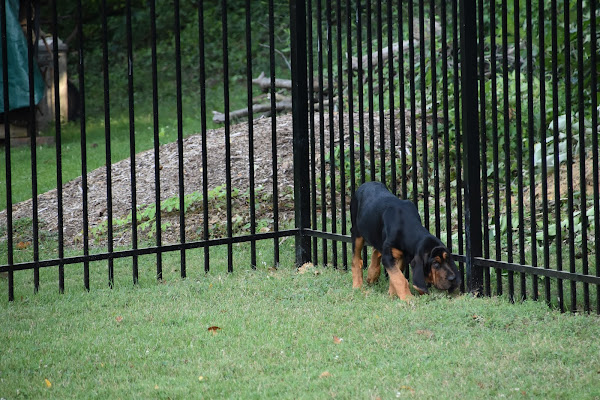 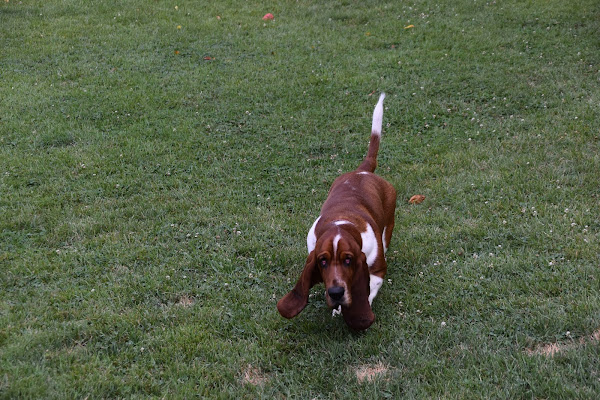 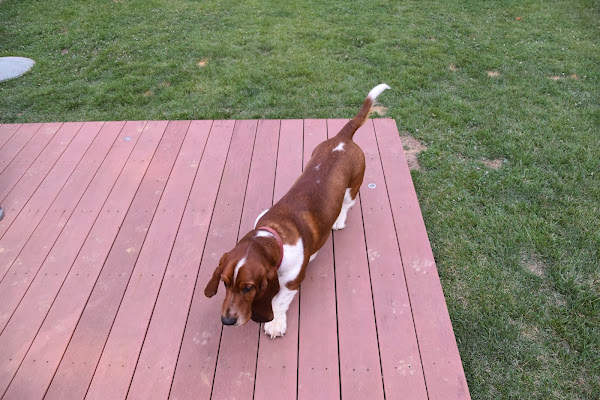 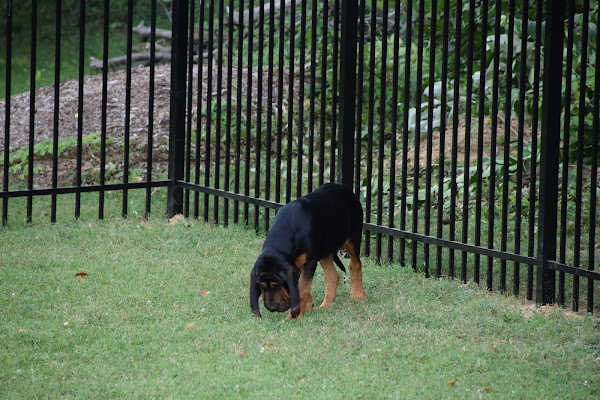 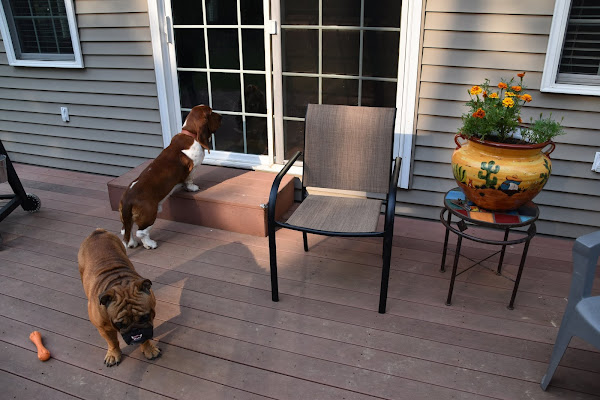 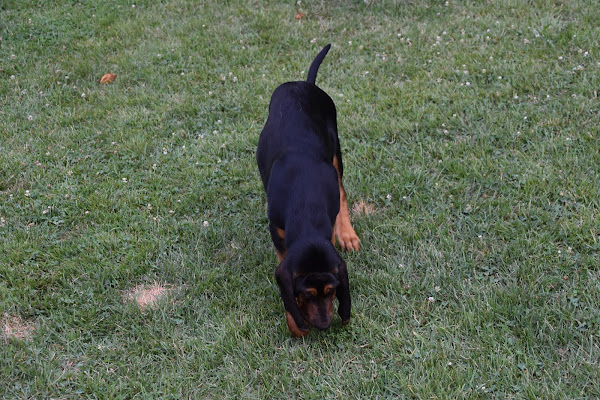 It will be the Reds-Cubs game again tonight. Since I am on Central time like Chicago the game starts later than usual so I get to bed later, possibility for weird dreams?? Oh I picked up all "real" bones from the yard BEFORE I let the hounds out. Walter escorted me around the yard to pick them up. He really is a great dog.
Another beautiful day in "the tropics" of Southern Indiana.
at July 28, 2021
Email ThisBlogThis!Share to TwitterShare to FacebookShare to Pinterest
Labels: Dog Bones, Hounds Fight, VW Repairs, Watson's Bone