While drinking coffee this morning as the pregame warmup, I checked intellicast dot com for weather radar that is my preference for weather radar. All rain was south of me and west of me by 200 miles. So I started THE project with sun partially showing on an overcast morning.

Opened the hood, slide back the first line dust cover and there was the C clamp just like my YouTube instruction showed me. I could already tell that my idea of just loosening a nut was not even a close guess and it looked more and more like Bill's tool was what I needed. The removal tool that I bought at the local Napa were just for A/C and fuel hoses as I had pointed out to the cashier but he insisted those were the tools he used to remove the oil cooler hose.

The YouTube video showed using a needle nose hook tool that got under the C clamp and pulled it out enough that you could grip the clamp with the needle nose pliers and then pull the stretched clamp complete off the connector. His hoses came with new clamps, mind didn't. So, I attempted to pry my hook tool under the clamp but I am not sure that is the correct procedure for the clamps that I have. I believe now that Bill's tool is used like he described, with the tool releasing the pressure of the clamp just enough for the old line to slide out and the new line to slide in.

I am pretty sure of that because my lines did not come with a separate package of clamps as if the old ones were replacement. I think Bill would have ordered those clamps if I had needed them.

But the excitement of this morning is yet to come.

Leaving the hood up, my tools sitting outside next to the RV, sun poking through the cloud overcast and knowing no rain is within a 100 miles of me on radar ... I jump in the Chevy pickup and head to NAPA in town to return the incorrect tool and buy hopefully that hook tool I had seen on the video.

While walking back to the truck at NAPA to leave, it sure did look awfully dark in the sky and rain could be just any minute....that is the only thing I was right about this morning. Just as I closed the truck door, rain started pouring down so hard you could barely see.

My RV hood is up, tools sitting outside by the RV and it's pouring so hard I can't see?????  Fantastic.

I told you "Murphy" and I were close friends when I did house or auto repairs....or so it seems. LOL I drive my 1-2 miles back home knowing I will have everything soaked that is sitting outside. It's was strange but the closer I got to my house the highway had less rain on it and by the time I was almost to my driveway, the highway was completely dry!!  LOL

I pulled in, took everything inside that had been sitting outside next to the RV, then tried the new hook tool in prying up that clamp off of the radiator connector for the oil line hose as the video showed. That clamp is on their so tight that I cannot get the hook under the clamp to pop it up enough to take off the connector. So looking at that clamp pictured below, it looks like a tool will be needed that can squeeze that small clamp you see by the large nut, releasing enough pressure for the line to be pulled out and later, the new line slid in, with the clamp staying where it is. 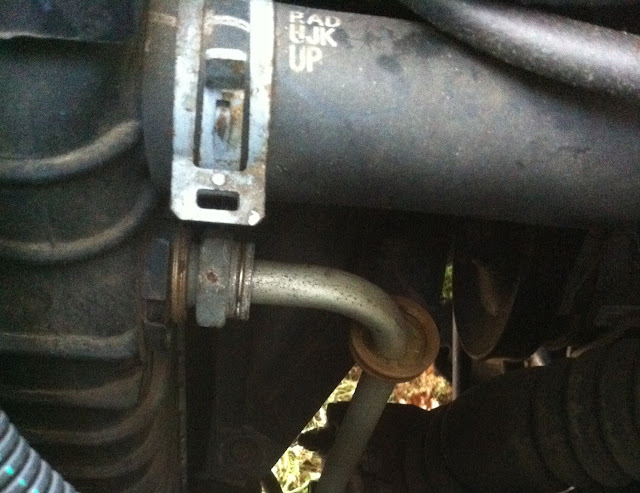 While I was trying to fit my new hook tool under that pin, the rain arrived. I closed the hood and sprinted for the house.

In the meantime while writing this post and loading pictures it has rained in a steady downpour for the last 20 minutes. With the tornadoes in Nebraska and Iowa last night and the storm in the gulf heading north, it looks like it will be a weekend of rain here in southern Indiana.

Hopefully the "football gods" will prevent the DirecTv signal from being blocked due to bad weather.
at October 05, 2013
Email ThisBlogThis!Share to TwitterShare to FacebookShare to Pinterest
Labels: Oil Cooler Lines, RV Repair