As scheduled on Monday, I crawled under the RV after I got home from work. It was a pretty simple and fast find. I wiped all the oil residue off the oil filter, oil pan, the hoses, and even absorbed the small spot up in the front of the oil pan where it meets the engine. Instead of waiting the 24 hours to see if I had any drips and then driving it on Tuesday, I turned the engine on after cleaning it up and within 2 minutes of idling the engine, my first drip showed up. 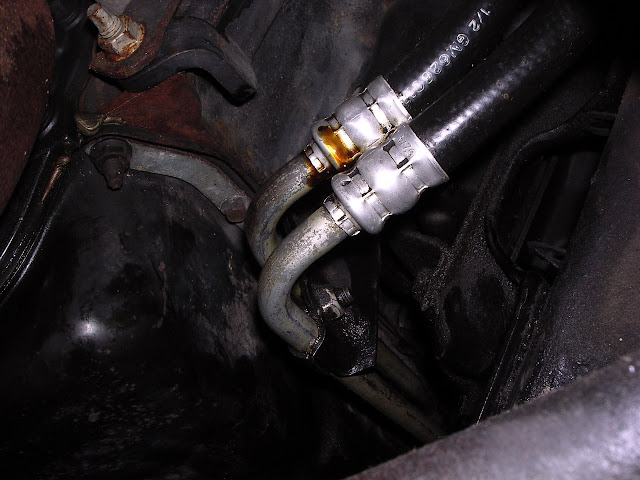 Those hard lines are coming from the oil filter, then the black hoses meander through and around the frame and just inside the wheel well, turning back to hard lines that go into the lower radiator...the oil cooling hoses. The 4 connectors between the black hose and hard lines are factory sealed.
So Monday night I took a quick trip to Napa Auto and then to AutoZone, both showing me an assembly for a Chevy 6.0L on a 3500 van frame...but the length's of the hard lines didn't look right, nor the angles. I came home that night and did some further internet searches without much luck.
Tuesday after work I headed for my local mechanic in this small town, "Bill's Auto Repair" that is right across the street from the small mini mart/gas station called "The Picnic Basket".....I am assuming you can read from those two business names and understand just how small the town I live in is. Which at times makes it hard to find repair or replacement parts for anything that has a problem. Even though the town is small and hard to find replacement parts at times, I felt that Bill would know where and how to get the correct oil cooler hose and/or assembly.
He told me he didn't have room above the lift in his garage to work on RVs and he was too old to crawl under an RV and have to work in his gravel parking lot to replace the hose, but he thought he ecould get the GM OEM part for me. I just had to give him the VIN of my RV and he had a site that would cross that VIN to the correct GM OEM part.
I picked up the correct hoses today and matching them with my pictures of the lengths and angles of the hard lines, they are identical.
You have understand something first before you think I am now home free on this repair job. I am not a mechanic, I'm an accountant. I do regular maintenance on my old Chevy pickup truck and use to on my old 60's VW buses I collected a few years ago but as far as doing major repairs ... not me. Also when I have attempted most auto maintenance "Murphy" shows up and makes a normal 1 hour job into an all day affair with me swearing at the end of the job that I will never buy another used car in my lifetime".
"Murphy" didn't take long to show up. Just as I picked up the hoses Bill told me "you know you will need a special tool to open those connections to your oil filter block and the radiator". No, I didn't know that, I thought from the picture I would just unscrew the nut and that would loosen the hose connections enough for me to pull the old lines out and install the new lines then tighten the nut.
I ended up going to the local Napa Auto and buying a plastic connector tool set that says it will work but it doesn't look nearly as impressive as the tool kit for different size connectors that Bill showed me in his shop. I'll try the one's I bought first. Bill said if those didn't work, I could take his set home with me to use as long as I could get them back to him the same day, because they use them every day.
How's that for service?
So as I sit here with the new oil cooler lines, I look at the weather forecast and see rain for most of Friday, Saturday and Sunday. I'll wait and see how it goes but I hope to replace the hoses on Saturday with a mindset, yes, it might take me all day just because the two connections to the oil filter are in a pretty tight place. I'm not sure if I can drive it 45 miles with this oil leak to the nearest RV shop to have them do the repair, if I can't get my tool around those two connectors to pull the old lines out and insert the new lines.
These are the two places I need those tools to fit. Sorry for the blurry pictures. 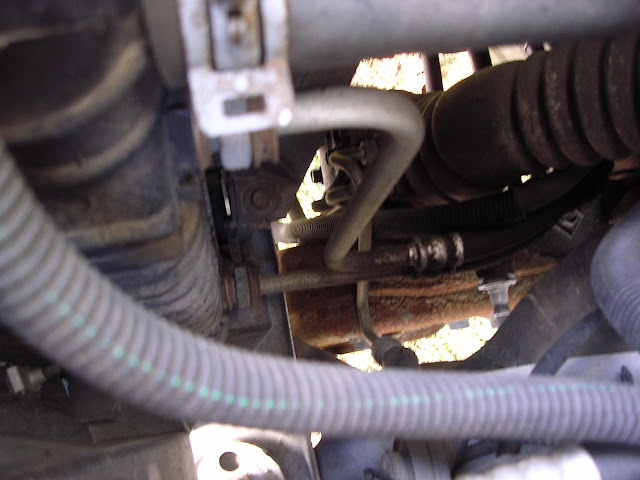 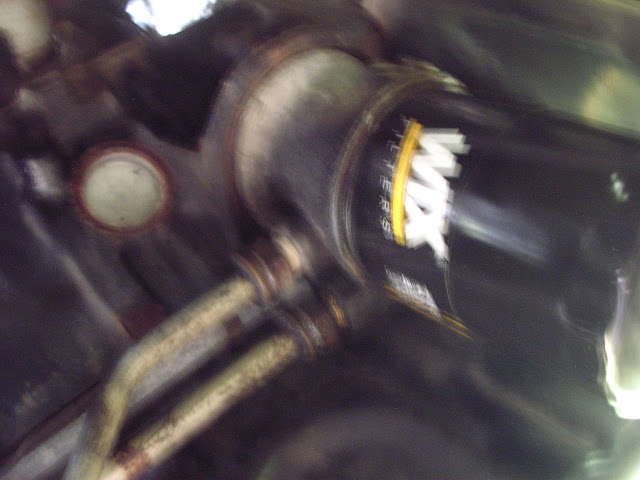 One thing before I go. This repair job does make one thing evident. If this would have happened while I was on the road out in the middle of nowhere I would have either needed to tow a toad or have Good Sam's Services where they would tow my RV to the nearest repair shop where just the repair costs would have been a lot more than the $103 I have spent so far on parts and the tool.

I am now thinking of towing a toad even though I would prefer not to.
at October 02, 2013