I told you before I wasn't a mechanic but I have been able in the past to do the basic repair for trucks, VW buses and cars. So I kept thinking last night, this job cannot be that hard to do. It's 2 lines and 4 connectors with a clamp clip that is extremely tight to get under to pull out. Add my confusion with what my mechanic Bill told me last week. I was under the impression talking to him, the clips stayed on and "his" tool just turned them enough releasing their pressure to pull the oil lines out.

That was a wrong impression.

So I took off to the local AutoZone to return the "oil cooler line" tools back for a refund and hopefully talk to someone different over there that may know something or anything about what I am trying to do. After all, I have shown everyone at NAPA and AutoZone the pictures I posted on this blog and had in my iPhone. NO ONE told me to pull the clips out....they kept selling me a set of "oil cooler line disconnect tools" that would spread those clips, release the pressure and slide the old lines out and the new lines in. Only the YouTube video talked of pulling the clips out. Now that I know what the clip's purpose was with this type of oil line, it's simple why you pull the clips out.

I left AutoZone with my 3rd set of "the right set of oil cooler line installation" tools, a Haynes Manual for Chevy Vans from 1998-2010, for my own sanity. Since my rig is on a Chevy Van Express 3500 frame.....and it included pictures I felt this manual might be worth the overpriced cost. I'm good with pictures....LOL. Still I wasn't sure the pictures I needed would be in the manual. I got home just in time for the Indianapolis Colts football game on TV so I had pretty well decided that I was done with auto repair for the day, just by making my purchase. During the first commercial I started looking the the Haynes Manual and I find a picture that could have been taken from my iPhone of the infamous clip that I couldn't get off. The describe the process of TAKING OFF THE CLIP!!

While the Colts fell behind 10-0 fast, I set the DirecTv DVR to record the game. I picked up my "hook" tool that I thought wouldn't work, only a different angle and got that 1st clip off that was on factory tight in a matter of a few minutes. 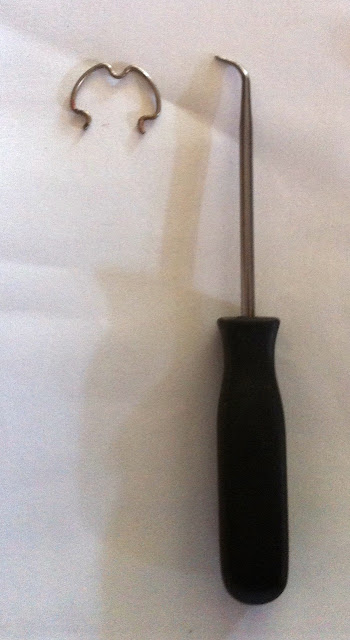 I was in shock!!!!  That clip had been my hold up on this job ALL weekend!!

I moved to the 2nd clip at the bottom of the radiator and that clip lifted up and out smooth has butter. Now the two metal hoses were not moving. About the time I was going back to football and say heck with it...I tried moving, twisting the top hose and little my little it started getting lose. I took a flat edge screw driver and by twisting that flat edge against the metal line....it popped out of the connector.  I'm on a roll so I forget about football, I'm going to finish this job today. 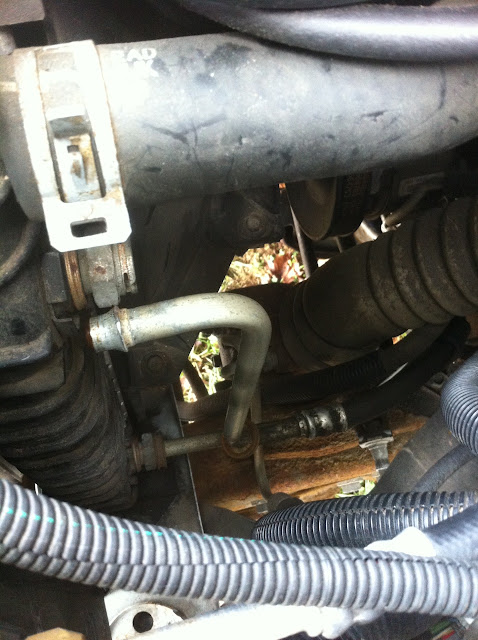 The lower metal tube on the radiator, came out with no problem. Now I had to get a one bolt bracket off that held both hoses in place before it went underneath. The problem was I couldn't fit my arm down there at an angle where I could get a socket wrench on it. In the picture below, that bolt is in the black spot in the center. I finally got that off, pulled the bracket up to along the hoses and took it off. 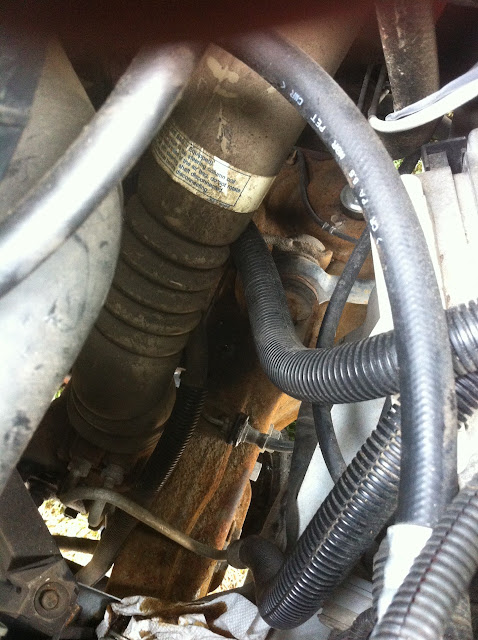 The big U bracket that the two lines run through is shown below. 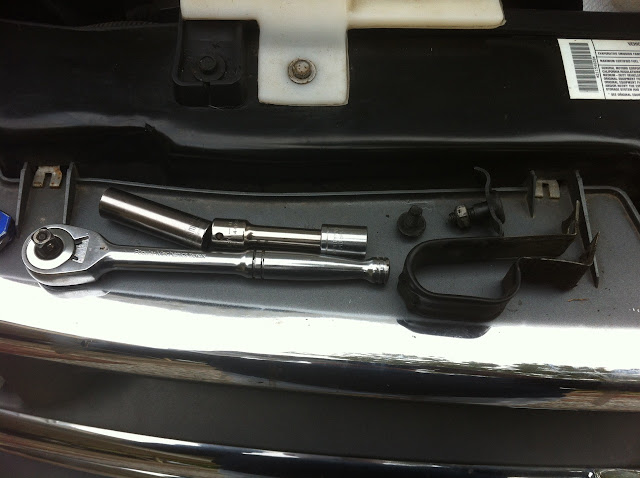 I got underneath the rig to pull the lines toward me but even with the black rubber material I couldn't get them to flex and move around some of the RV frame....so I cut both rubber hoses and let the oil drip/run into my oil pan I use for oil changes. I am about half way of getting these lines out, when I run onto a different one bolt bracket that later was a lifesaver when I re-installed the new lines...this bracket not only supported the lines but lined them up correctly. It was pretty easy to get to even with little room under the rig. 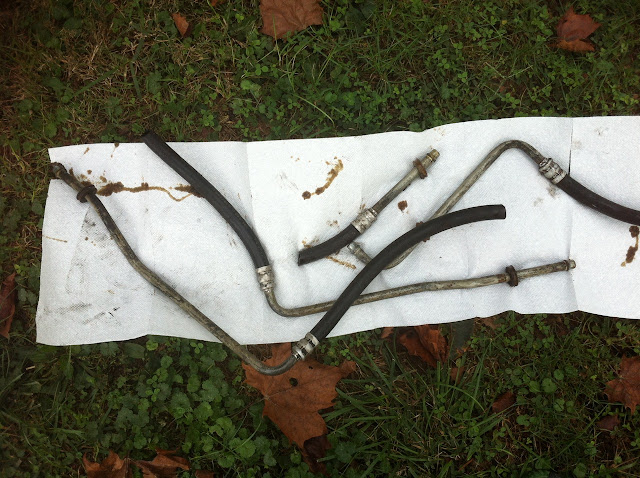 Two clips to go up by the filter...I use the hook tool...1st clip out within seconds. The last one of four clips turned as I pulled one end out and I thought I had lost it on the ground (grass) under the RV but there was so little room to maneuver that I couldn't just turn to see where it may have landed. I couldn't find it. The 3rd line comes out smooth as butter. I get to the last line and it will not budge...will not twist..nothing...it's like it's frozen in that connector. I'm stuck on the final line!

I go in the house to get my LED small flashlight. As I look at the final line, I see that clip had not dropped into the grass but had swung around to the back of the connector. The clip was attached enough that it was still holding the line inside the connector.

So all the lines are out, my hands are covered in black oil residue, road dirt, underneath grease gunk and everything else that comes with working on a vehicle. I was able to keep all of my fingers, wasn't missing any tools nor the two bolts I would need to put the brackets back in. I didn't have any oil drip into my eye but my old ballcap took some major oil drips as I was under the rig working.

I did this work while keeping Winston (oldest basset) away and telling him to get out from under the rig...he was determined that I needed help under the rig, so he had crawled on his stomach to get a hounds eye view of the work underneath the RV. Luckily he lost interest and scooted out backwards and laid in the sun the rest of the afternoon.

I almost decided to stop there and install the new lines on Monday but I thought there's plenty of daylight left, it's sunny  .... so I thought I'd at least get the lines pulled through the frame underneath and attach those two brackets that lined up the lines but not tighten them until I had all four lines in their connectors.

The longest part of the installation was installing these two 1 bolt brackets. Some of the time I couldn't see what I was doing. I needed to squeeze this U shaped bracket at the bottom, slide the bolt in and then find the hole on the frame that the bolt was to attach to. It took me a while but finally got the bracket bottom squeezed together with my index finger and thumb while holding the bolt with my middle finger. Once I felt that bolt fall in the bracket...I slid it over about 1/4" by feel, couldn't see anything, I feel the bolt hit the hole in the frame. It's screwed in one click at a time on my socket wrench due to space available.


As I was underneath the RV to put the last bracket in, I couldn't remember how the lines went. I must have spent 30 minutes seeing those lines were not going to work on the bracket the way I had them. They would have been pressed tight against the frame and I knew that road vibration would rub those metal lines into leaking. So I knew I didn't have something lined up right.

I then realized I was trying to put the bracket on the wrong side. Once I moved the bracket to the correct side, the lines lined up perfectly. When I installed each line into the connectors I could hear them pop into place, so a solid seal even without the clips. That oil you see is from the old lines coming out....I didn't wipe it clean before the picture, so the new lines are NOT leaking at this point. 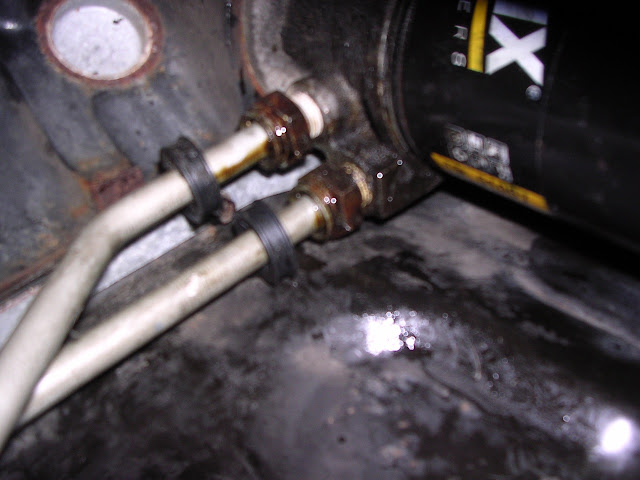 I'm not finished.  I have 4 used clips but didn't install them because I am not sure if they are to be reused. I would feel better installing brand new clips and I can get them on Monday. I am going to put in just enough oil to cover the amount that I lost in this repair so I can turn the engine over and check for leaks on the new lines using old oil.

IF....IF there are no leaks after running the engine...then I am changing the oil on Tuesday and will start with new oil. The label in the engine bay showing the mileage, date and type of oil doesn't match the seller's story even though it is a recent oil change...imagine that?....I'll put in new oil and start clean.

So I didn't hit my hour prediction after getting those clips off but I estimate it didn't take me longer than 2-1/2 - 3 hours for the work I did on Sunday. My yard work ballcap took heavy oil drip hits. Better the hat than my head. At least the cap will clean up. 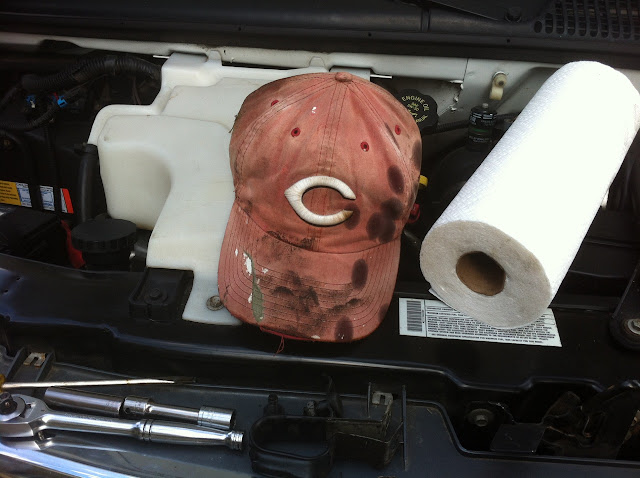 I'm hoping for no leaks with the new hoses installed. If there are leaks, personal counseling will be the next step because I will probably go off the deep end if that happens.

I was sold this "oil cooler line disconnect tool" three different times, different sizes and they never worked as the process was described to me. I know I followed their instructions but I don't think these are for the type of connectors I have. This set of four are going back tomorrow for a $20 refund. The one pictured was the one that would work on my oil lines. Wrong answer.