Hounds & I Are Loving This Weather 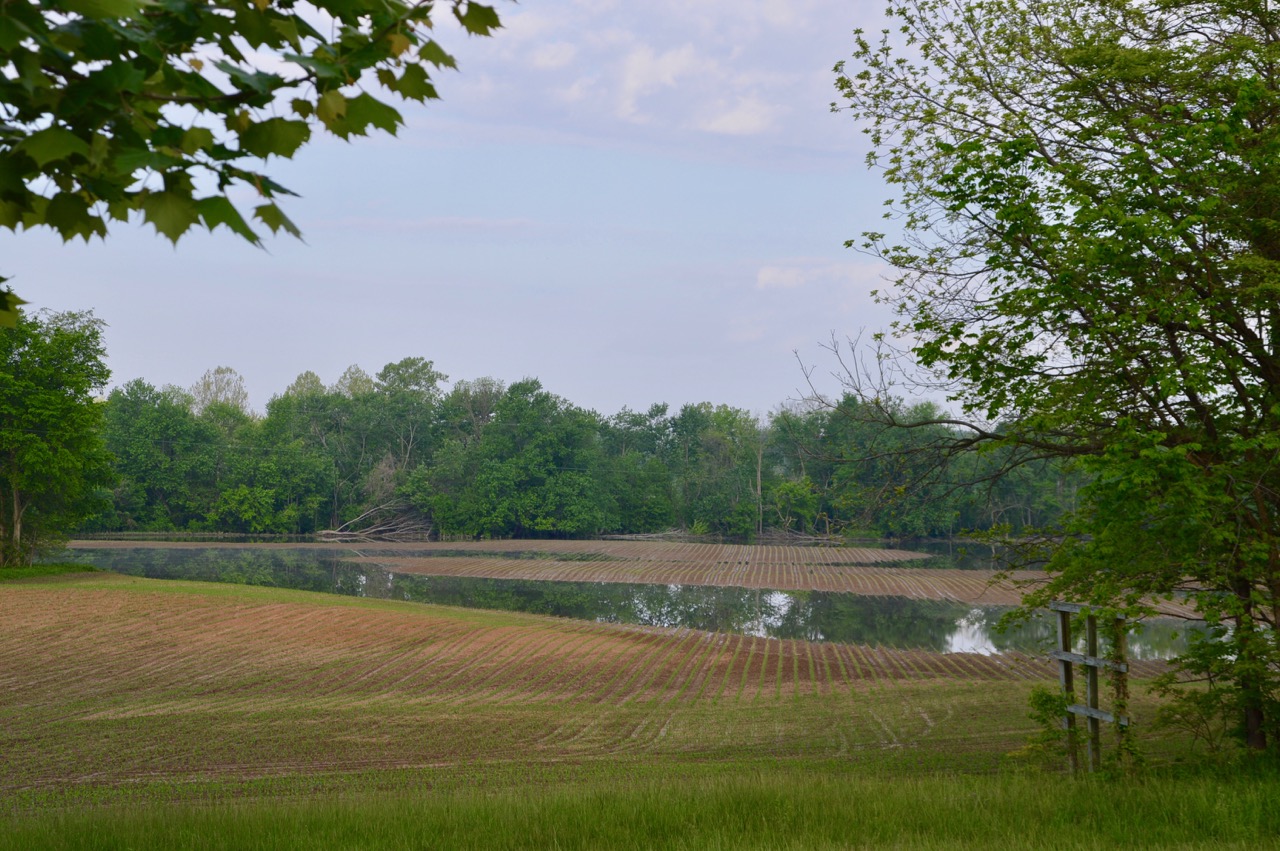 While it was 74° after midnight last night, the hounds were sleeping peacefully. They had a pretty active day yesterday with 3 walks, and numerous other trips outside. This morning the air was filled with the smell of honeysuckle and a cloudy sky of blue. I find it interesting that the rows of corn did not float away while spending days under water.
I took a cup of coffee outside this morning while keeping an eye on the hounds. They have been wandering off more and more recently. It's to the point that I cannot let them out on their own anymore. Sadie is checking to see if she is the only hound being call back in or does Stella have to follow the rules too. 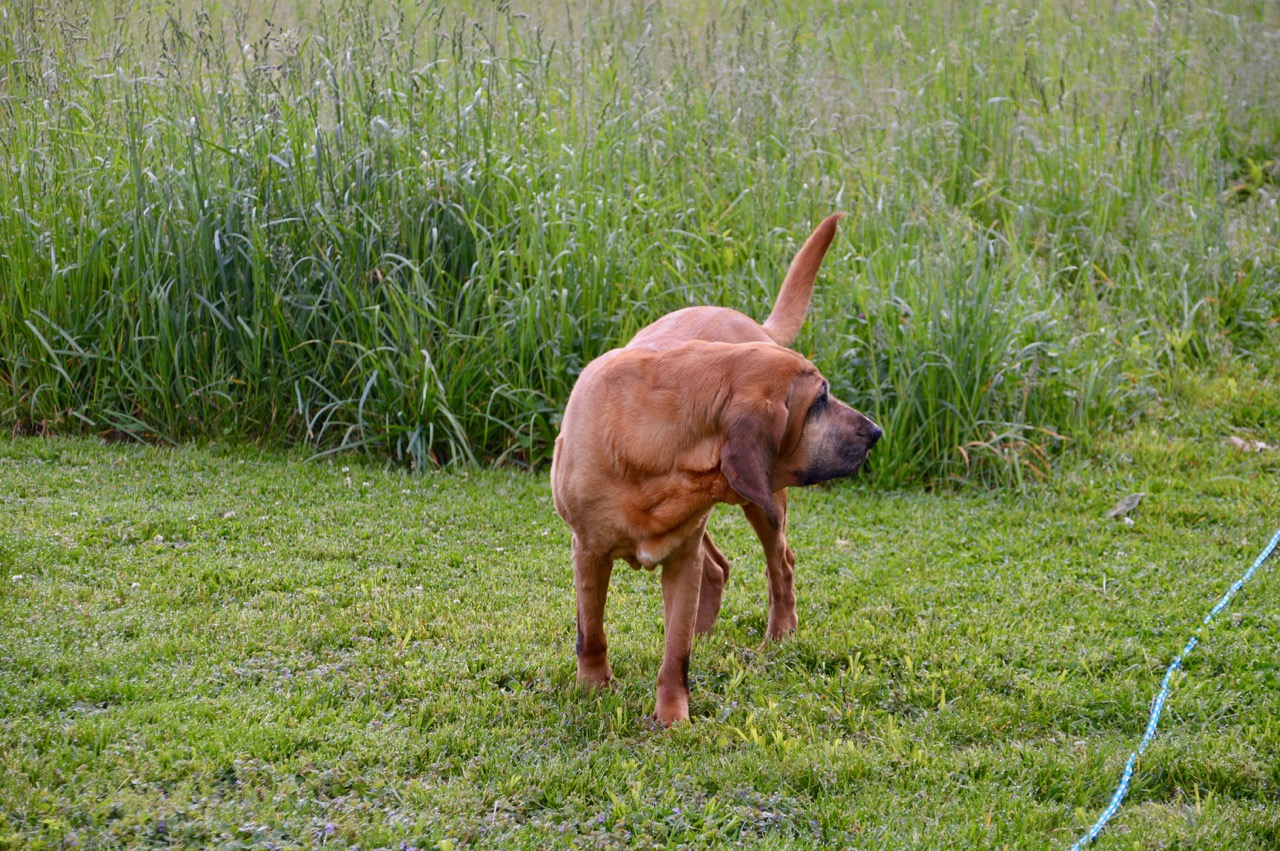 I didn't get a picture of Stella over by the burn pile, but I did get one of her starting her day in the normal fashion of a good deep itch relieving scratch. This is also after not finding any ticks, fleas, hot spots and anything else that could cause her to scratch like this. She stood inside the bathtub like a statue as she got a bath yesterday. 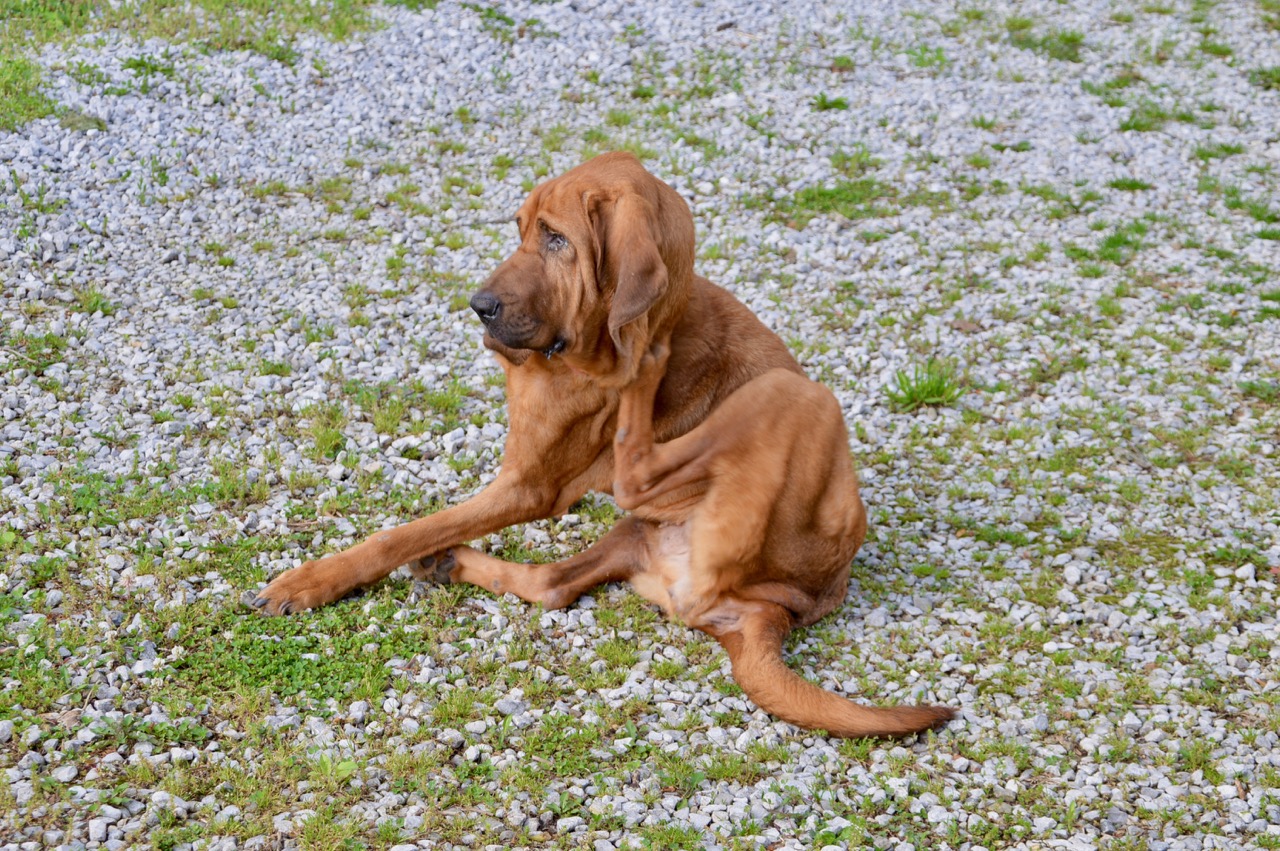 The bugs were out in formation early. I could hear them buzzing close to my ears and to me there may not be anything worse than having to fight battling insects that fly and dart fast enough to stay out of my reach ... biting me. We headed back inside for that 2nd cup of coffee.

With computer problem solved and operational, the only crisis around here was whether to go back putting the blog post content above the picture it went with instead of below. How's that for having all of the world's problems solved here in 'the tropics'?

With the morning being so nice, Sadie did not hesitate in getting me outside for the hounds first walk of the day. I had not sat in my chair 5 minutes before she was at my elbow telling me "lets go". Her mouth grabbed my left hand leading me to the edge of the field, then she took off running to get ahead. 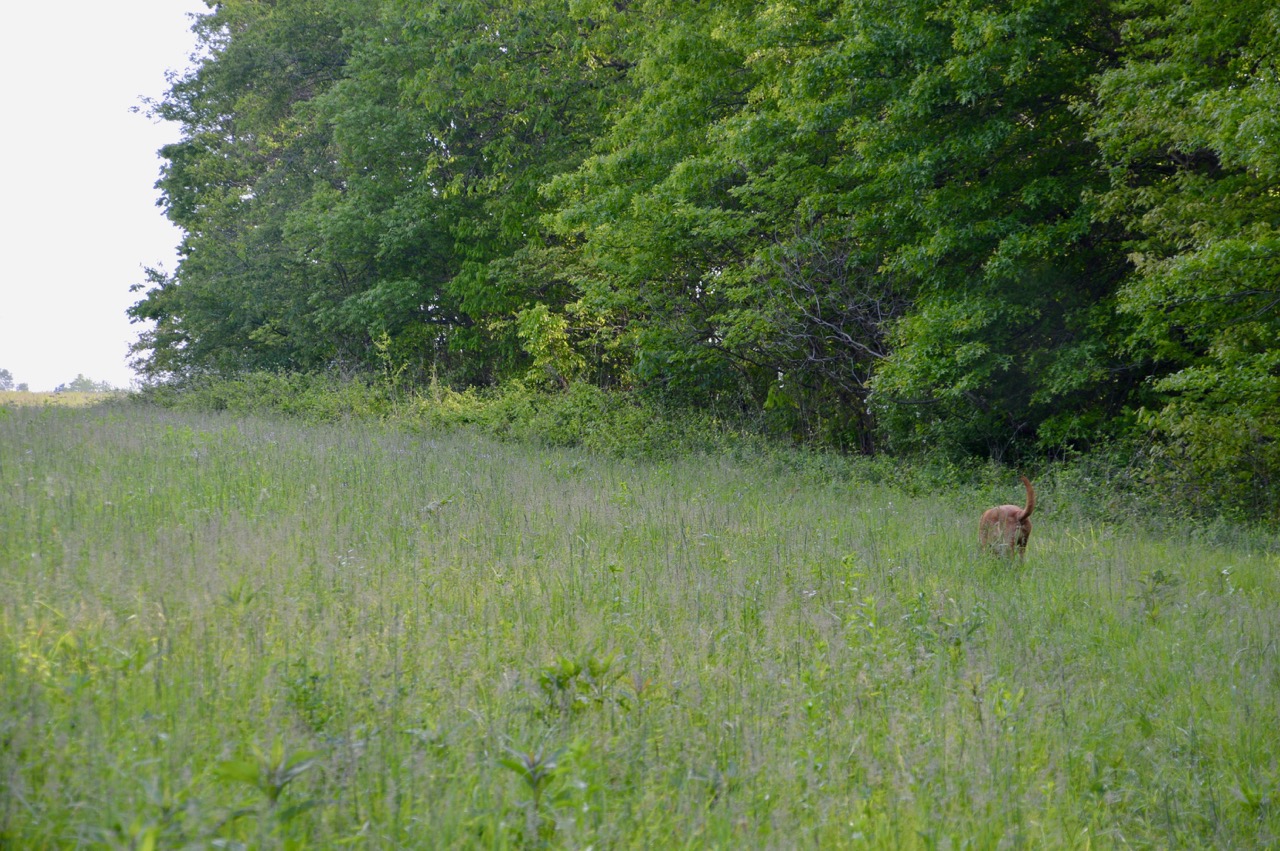 Stella was back to her slow pace this morning and wasn't going to change much. Although she did trot to catch up with Sadie later on and was even leading the walk at one time.

The new computer set up is working out fantastic and I continue to learn new things by finding small changes to tweak it a little finer. You never know the settings have been changed with the fresh restart, until something doesn't work. 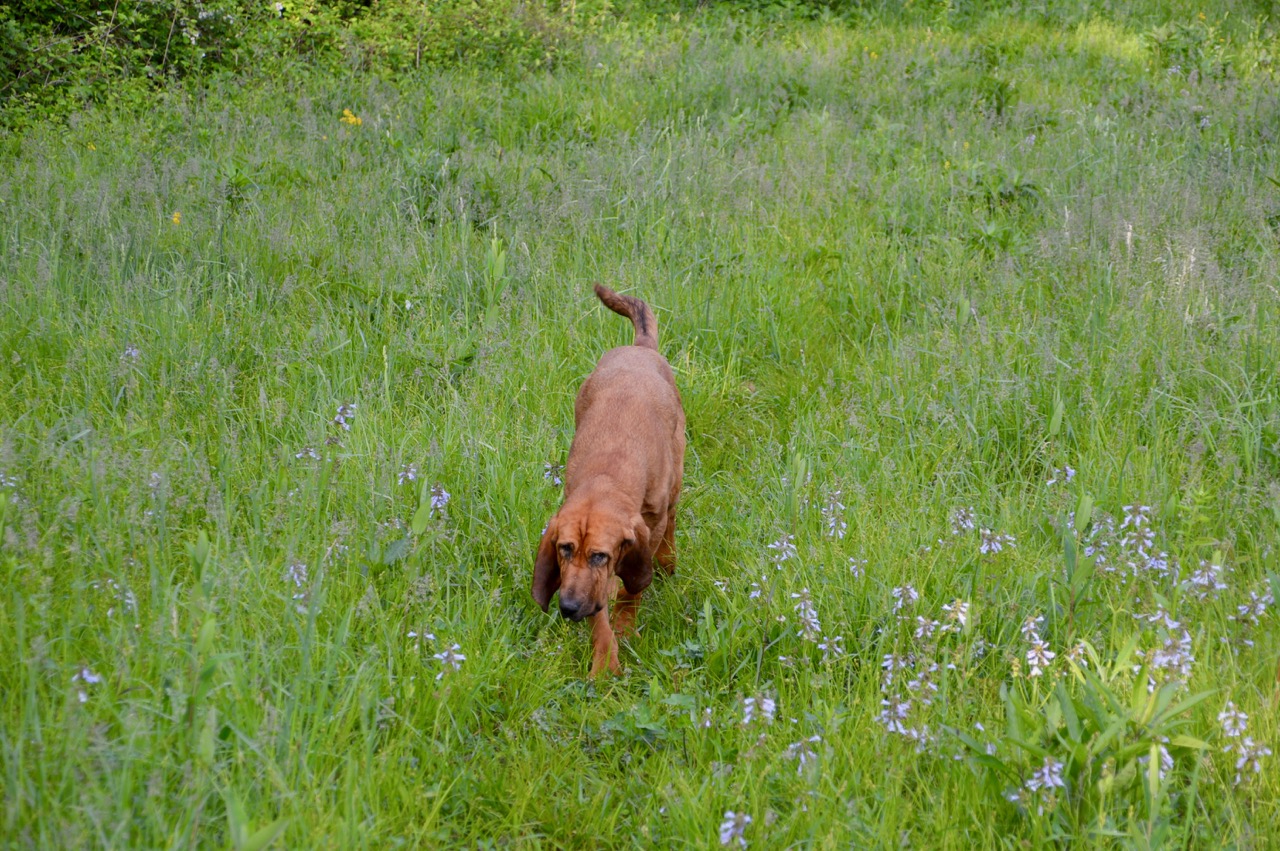 As expected with all the recent rain the field is growing at a fast rate. It might not be as thick in the majority of the field but it is getting taller than my knees. The brush along the sides is thick enough to where you cannot see through it, let alone walk through it.

Sadie was certain there had been deer in the area before the first turn. 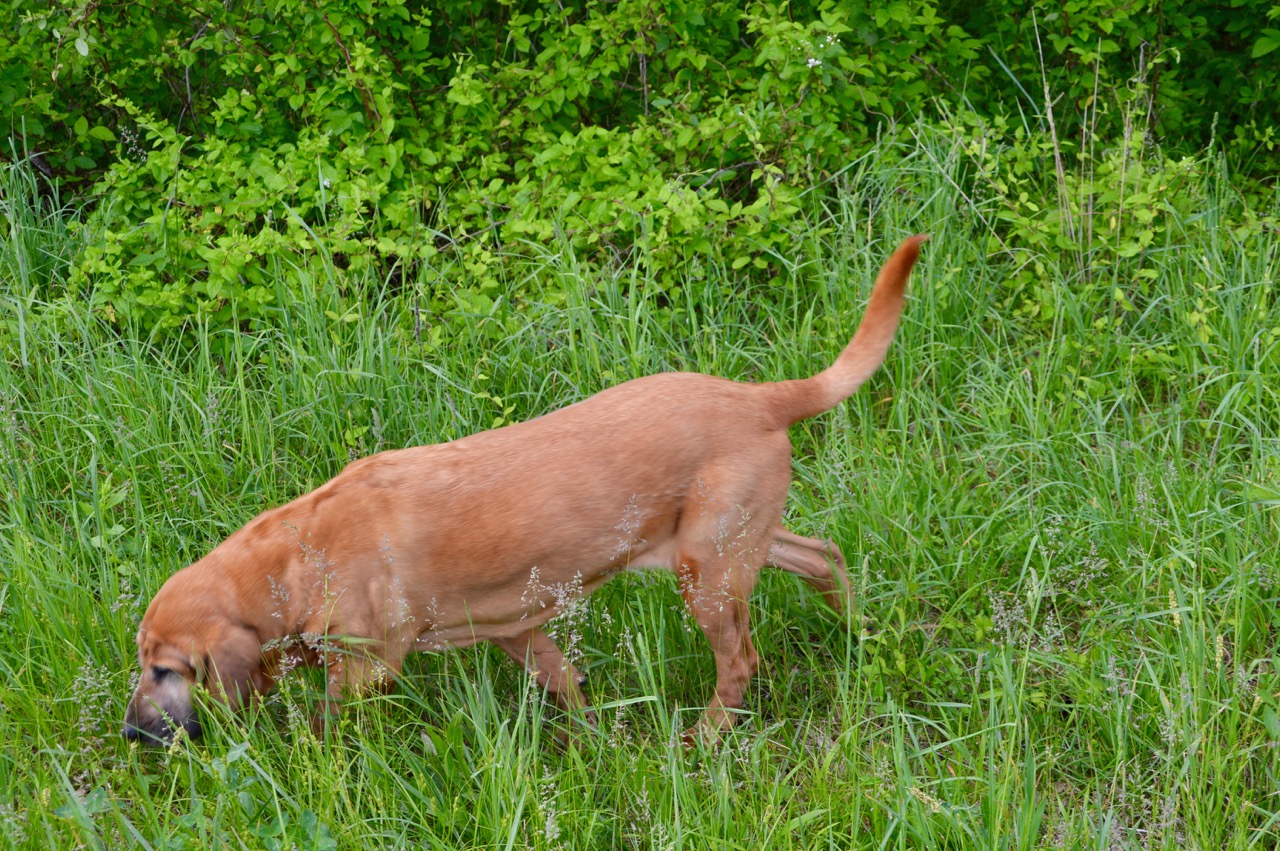 Stella was back looking for that rabbit she accidentally stumbled on in the 3rd walk of the day yesterday. Even I heard the rabbit charging through the small brush breaking sticks as she ran to get away. 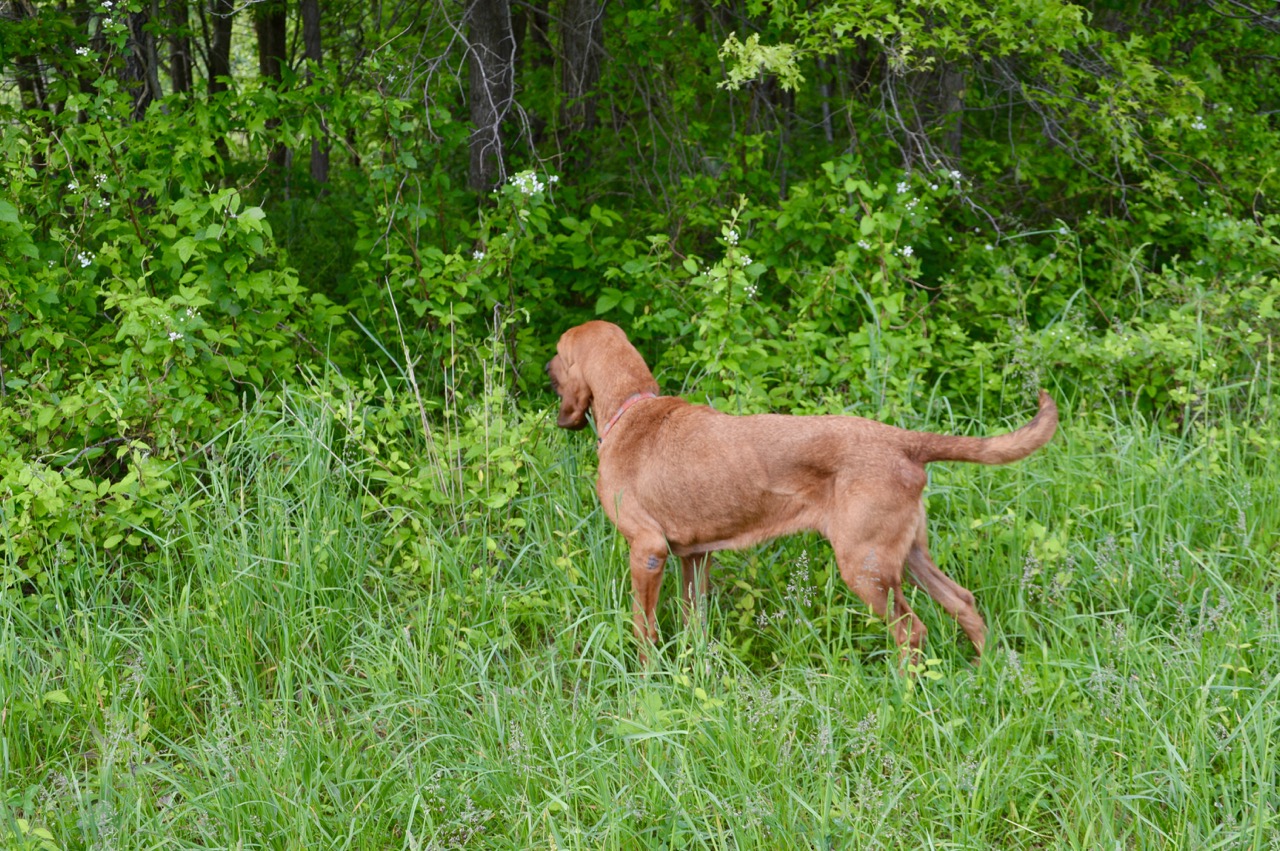 The noses of the hounds were really active this morning but that did not mean their energy levels increased along with it. I decided I'd let them go where they want, do what they want, just as long as they stayed out of the woods and out of the gully. 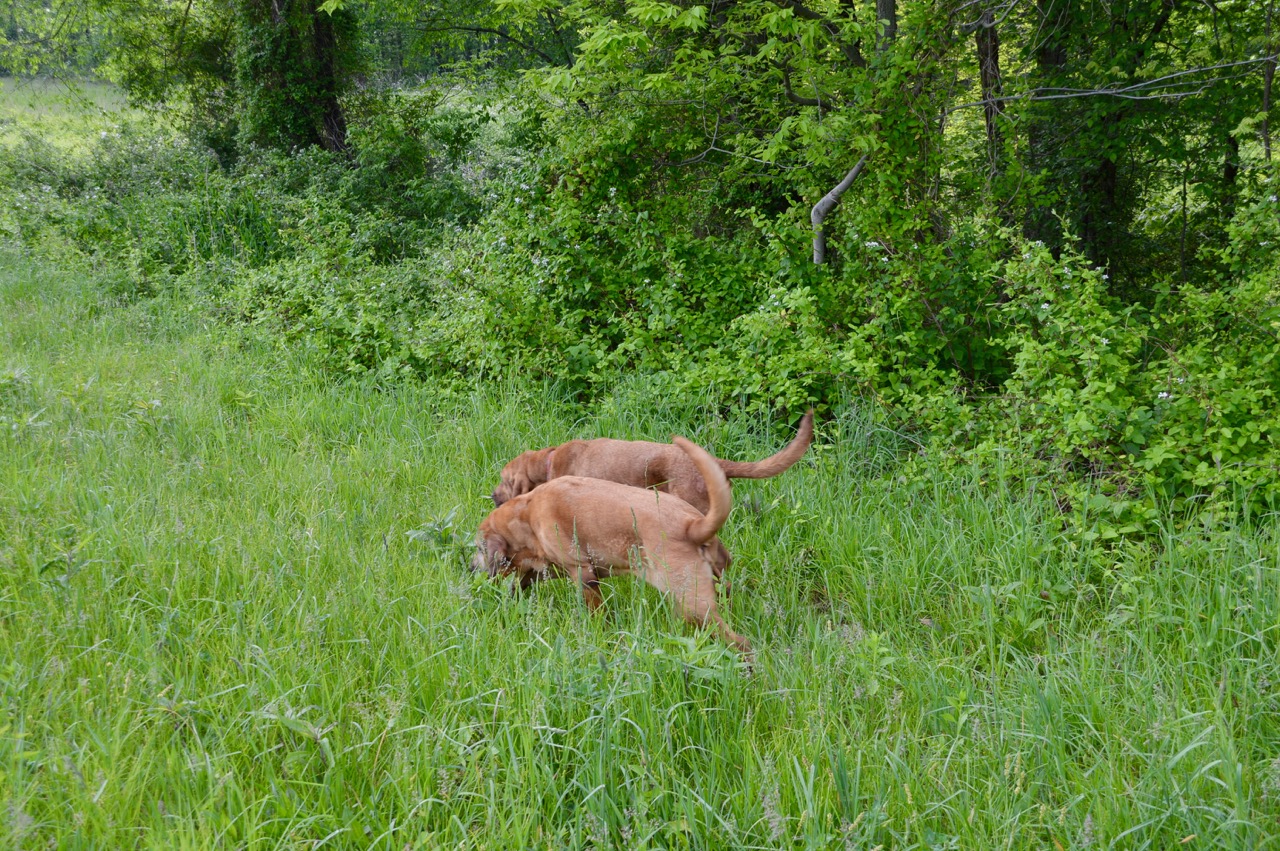 When they both made the turn to the far corner I decided to join them. Not only could I keep a better eye on them in case they decided to bolt out of bounds but it would give me a different angle to take some pictures. 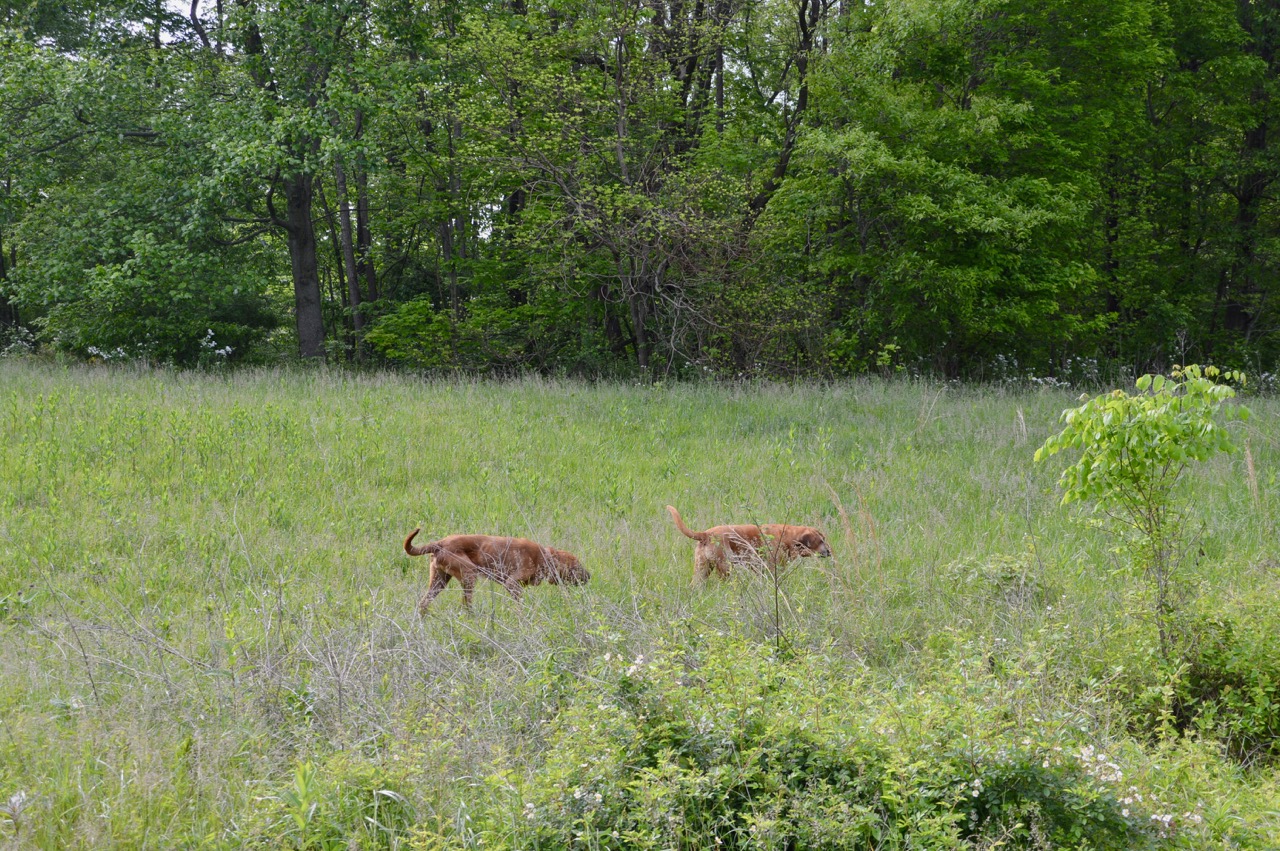 Is this what I am smelling? If you are a plant or flower hobbyist, please chime in here to correct me or give me answers. Google images tells me that it's honeysuckle. 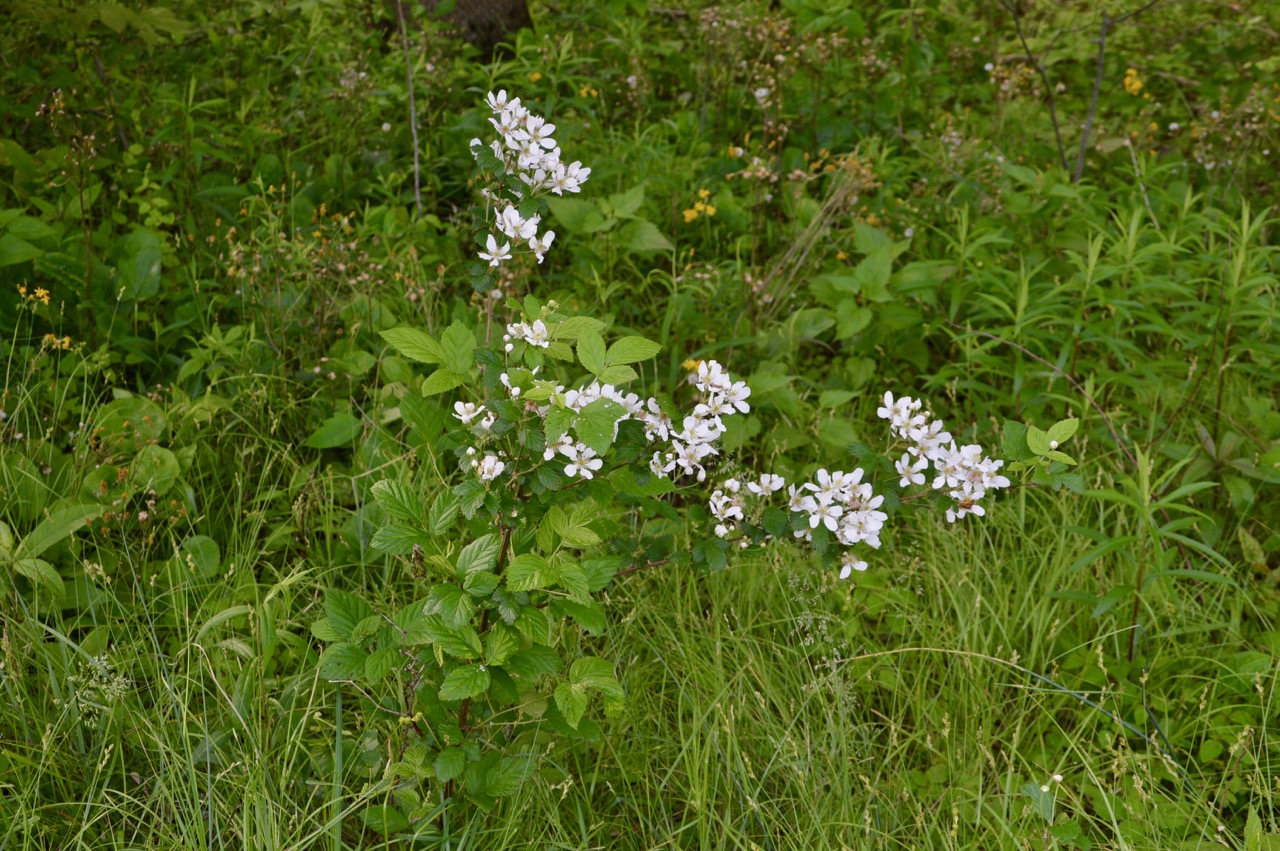 For these two partners in crime, there is nothing better than some fresh morning natural protein to add to their diets. They were so stubborn when I called them that I had to walk back and nudge them to get going. 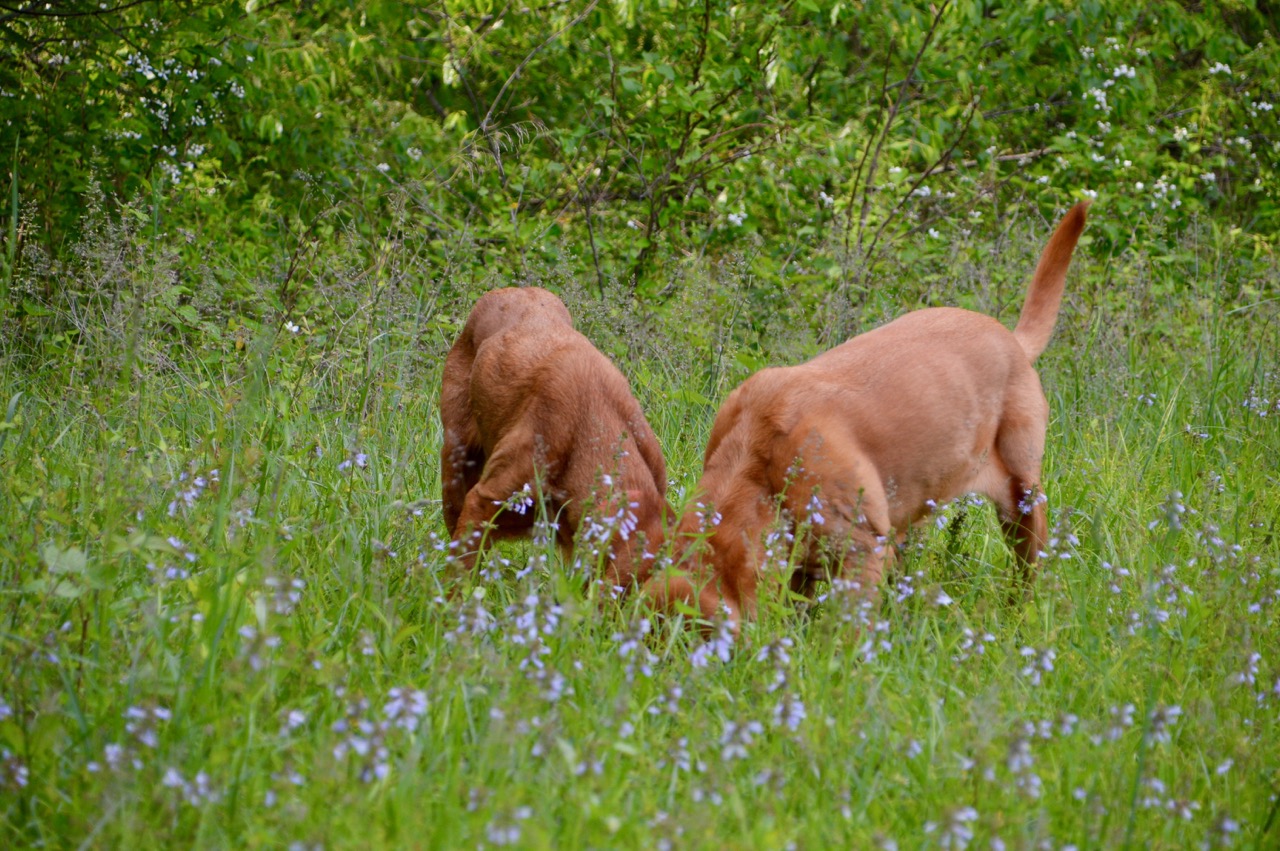 Stella took the short cut again, cutting the corner of the last turn. She stood and looked into the area of the 'no-fly zone', then slowly followed behind me. I still have my suspicions that she is sick. So much change in her in a years time. 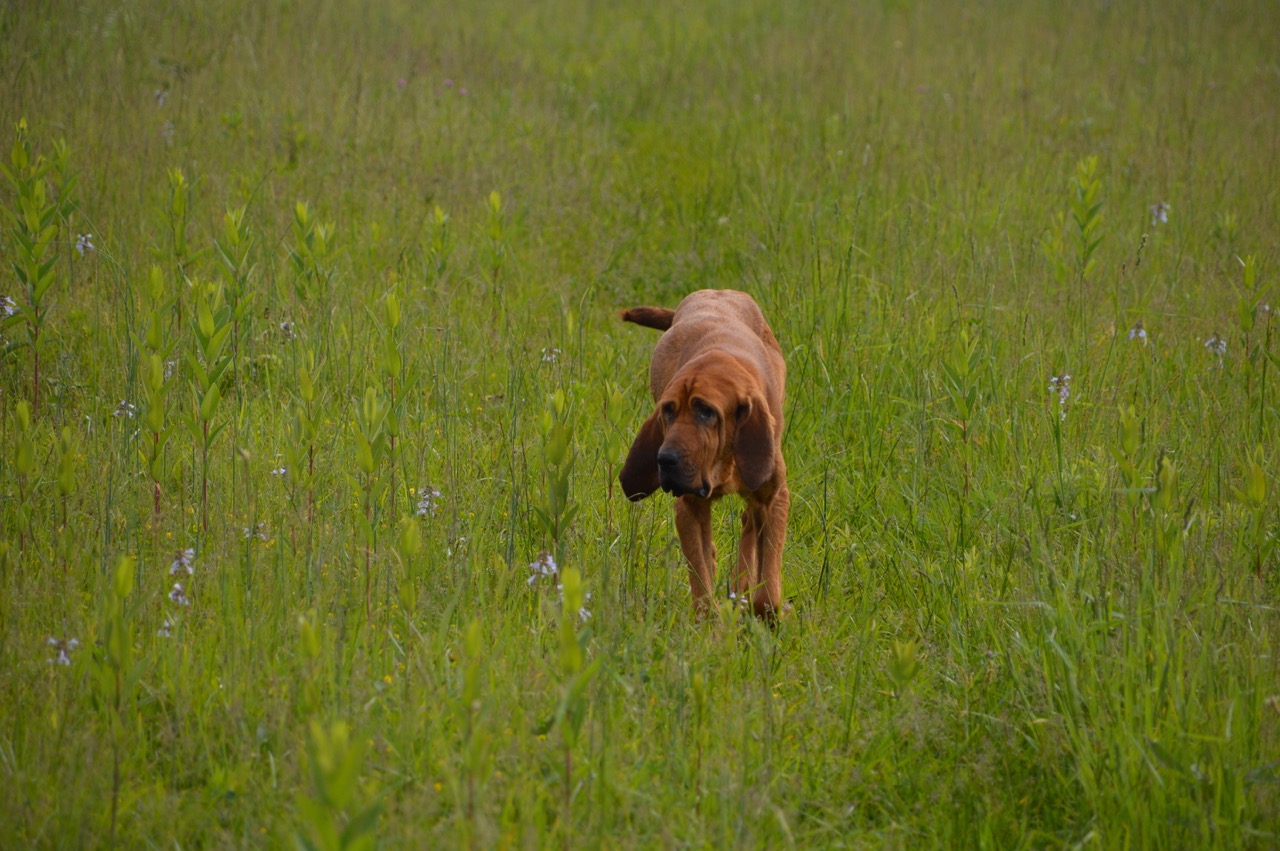 They both continued the slow walk home. I wanted to get back to fix some breakfast/brunch before loaded up the Mini Countryman with two 32gl trash containers for a trip to the recycling center. One had my recyclables and the other had bagged trash that I can drop off for a whopping $2. 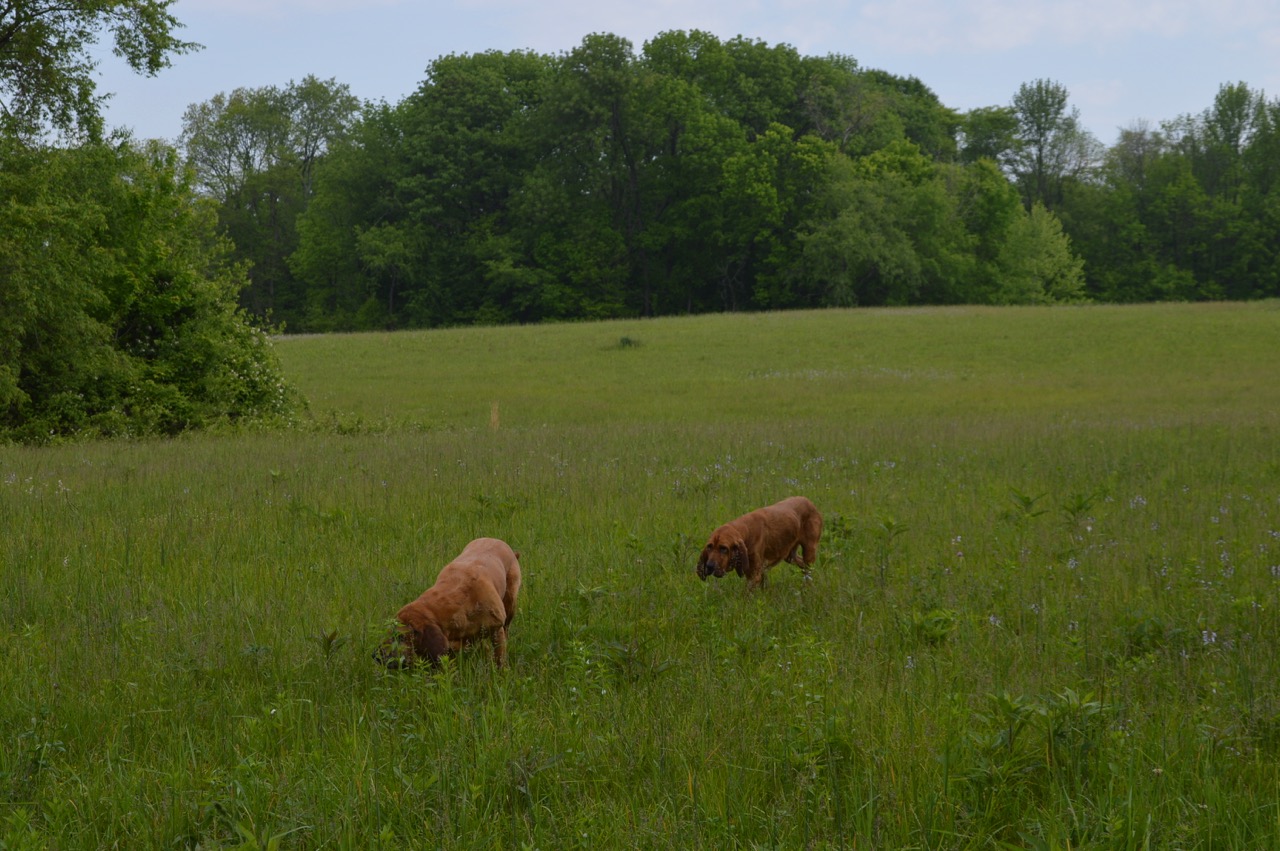 They tried their best to casually veer right, walking further away from me. Lately in the afternoons, without taking my camera, they have been going too far out of their boundaries when I let them continue their wandering off.

With the recent rains, there is something in the drainage ditch that runs along the edge of the field and the neighbor's yard. Stella is very attracted to that area and it almost takes me grabbing her collar to get her to leave. She was following that ditch toward the highway Monday, so the recent afternoon walks have been without the camera and carrying the 25' retractable leash in case I need it. 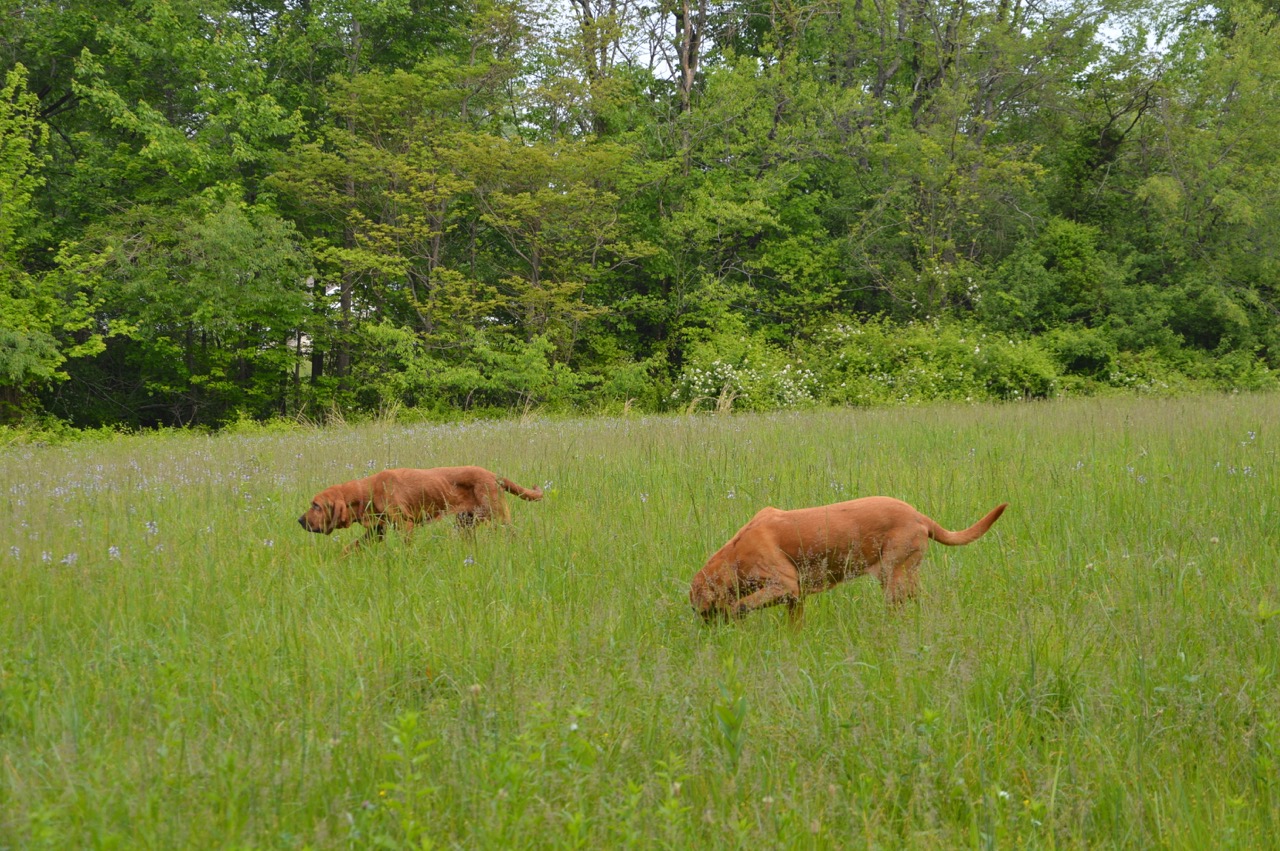 I almost stepped on this guy, luckily Sadie nor Stella saw it. I don't see as many of these worms as you would expect. I see a turtle every once in a while but not every year, no snakes and lately no sign of the large blonde field cat. 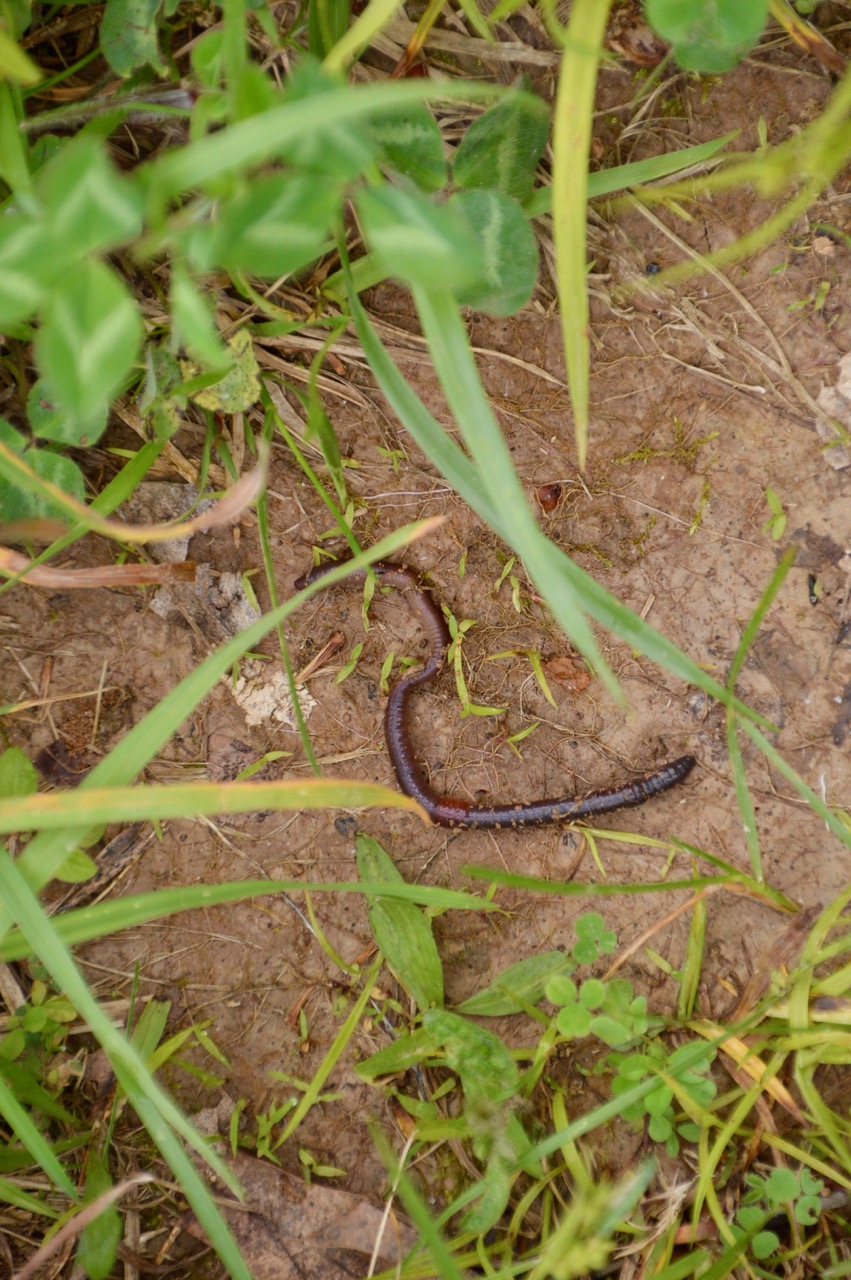 The flooded water receded a lot over night. The water level can change by the hour. With my trip west of town to the recycling center, I saw a lot more flooding than I have been seeing across the highway. As it should be since the river is in that direction. 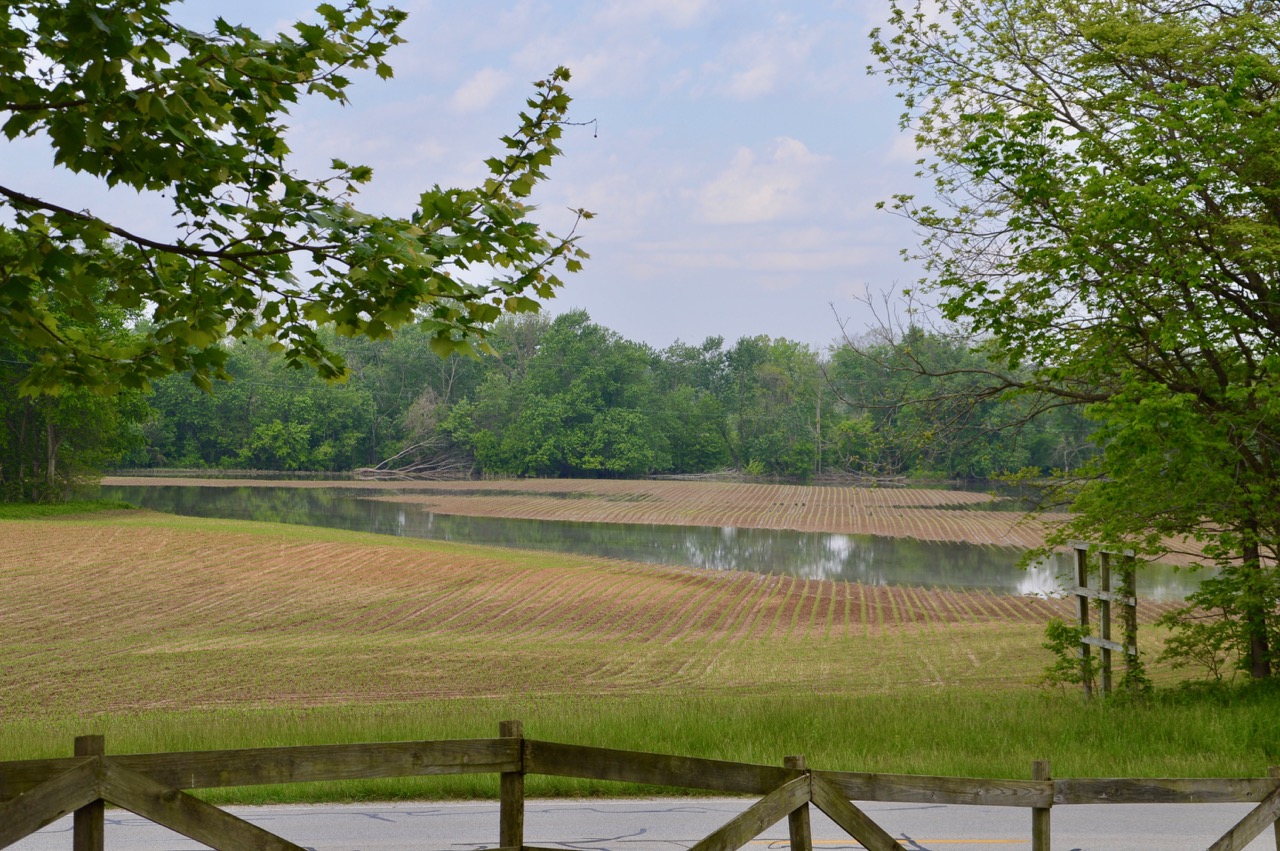 Whenever you do a major install of a new computer that you just bought or changing out one like I just did, all of those settings change. Anything from your cursor not able to move to drag and drop cells in Excel to the keyboard not scrolling to the left fast enough when I am trying to delete a sentence.

Yet there was nothing worse than finding out yesterday afternoon that when I did the migration from the iMac to my laptop, it set my Mahjong game back to a brand new start. All of those games I had spent hours playing, achieving my goal sometimes of completing the games under 3 minutes were gone !!!!

A 160 different games were all setting at different times above 4 minutes, just waiting for me to start over on my quest of under 3 minutes to complete. It's harder to play on a screen twice the size. Using the keypad on the laptop was still slower than normal with the larger monitor.

One great thing I found out how to do yesterday ... I can close my lap top and as long as it is on and plugged into my external monitor it works perfect just like a hard drive. So I am back to one monitor instead of two. I'll see how I like that change ... because the results could determine if a possibility could happen months from now.

I remember the first time they were set out on display a couple of years ago, the iMacs with the 'retina' display blew me away. The difference in picture quality is indescribable. I told myself then and remind my self to this day ... "STAY AWAY".

So on purpose last night, I surfed the web during commercials of the baseball game I was watching, on my iPad Mini ... that has ... a ... retina display.

My brain cells scrambled, pulse rate went up, ideas, temptations, justifications, and maybe even some slight drooling took place as I looked at the clarity and perfect picture quality ... KNOWING ... an iMac with that retina display was just a 40 minute drive away.

I admit it ... after the game was over, with my Reds beating the powerful first place Yankees, I sat in my desk chair and went straight Best Buy online to take a look a those iMacs with the retina display. It was a tough fight all the way not to change my current path from what I have set up to buying something new ... with that damn retina display.

Other websites, and bloggers who talk about Apple computers almost always warn their readers NOT TO go take a look at them on display because you will never look at your computer monitor the same way again.

With some sound sleep, a bowl of fresh fruit for breakfast ... all of that "retina stuff" had evaporated from my thought process. Sometime overnight I had been drug back into reality and lectured on my lack of focus.

With the yard mowed yesterday, recycling trip this morning, days of salad cut up in advance, a fresh pineapple cut and ready to eat ... there are not any plans for today. I'll continue to live in those '5 minute' windows like a child, led by the decisions of the hounds. (ie: would you prefer I stand on the right or left side of the door as I let you out for the 100th time today?)

I love that I have gone from a work-a-holic to a full blown slacker without any transitional pain. Being 'a slacker' should have been my career path from the start.