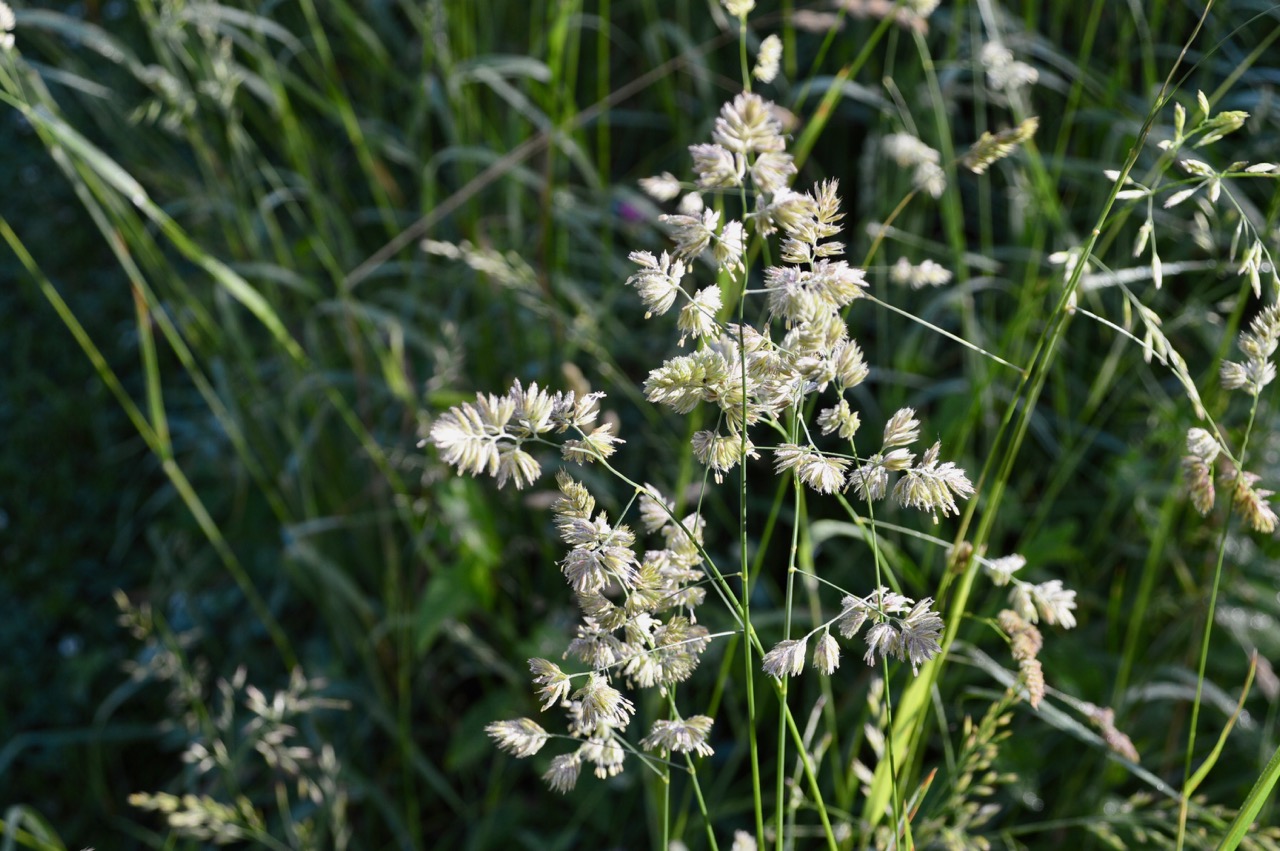 As the hay gets almost shoulder high at the edge of the yard, other places in the field it is not as high as my knees. With this comes pollen and that is a huge problem for me. There are times even the allergy tablets are not good enough, at least the ones I buy off the counter. Maybe I need to start taking some of that 12 hour stuff. Anyway, all of us survived the holiday weekend. 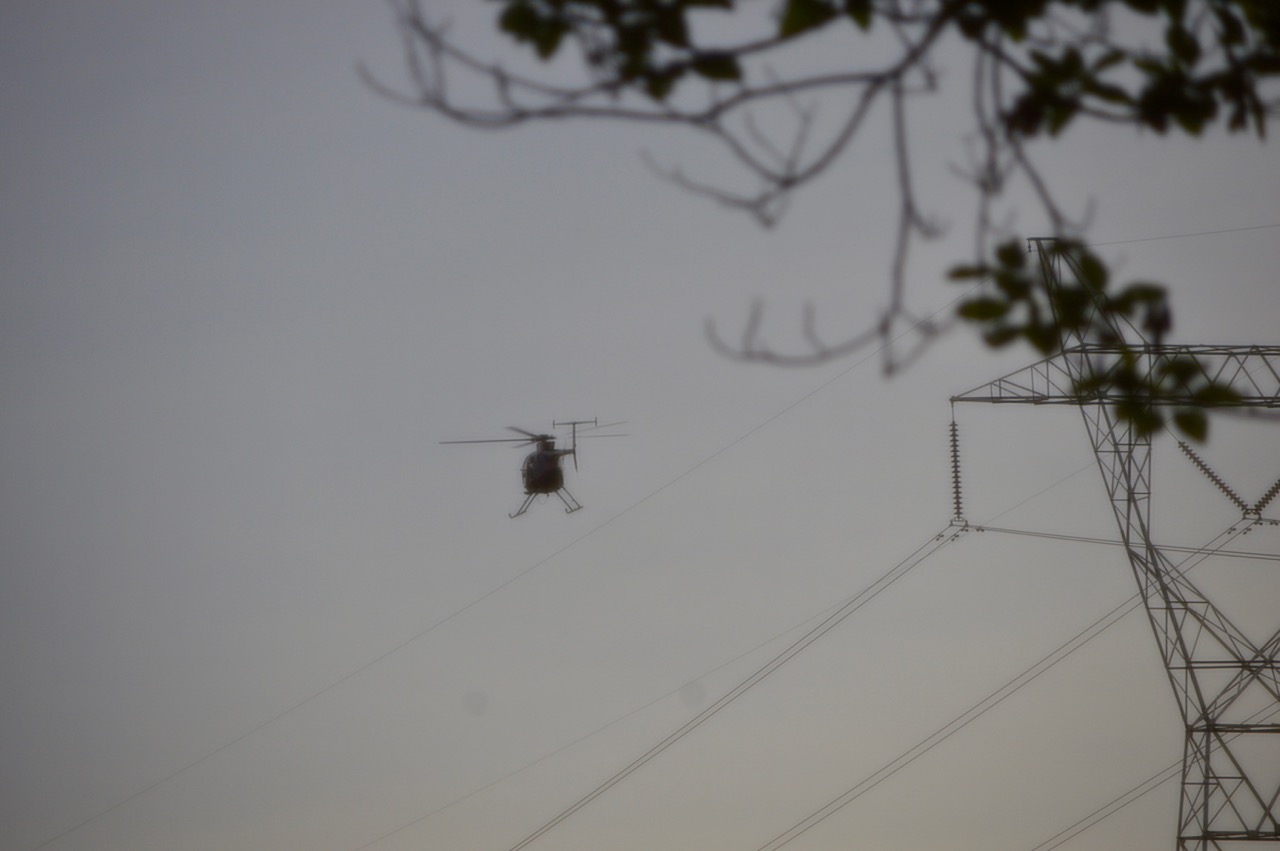 The highlight of the weekend was early Sunday morning while sitting at the computer, when I heard a familiar sound of a helo. It sounded as if it was landing right outside my window in the field. I knew there was not enough room at the landscaping business for it to land nor behind the trees, but the familiar sound was extremely loud. That could only mean it was hovering about the power lines and other towers that are behind the trees and run through the gully.

I wasn't quick enough to get outside to take a better picture, so this was zoomed through a window screen and did not turn out as clear as I had hoped. It would have been gone if I had gone outside. It was hovering right above that tower for a few minutes, hidden by the tree limbs. 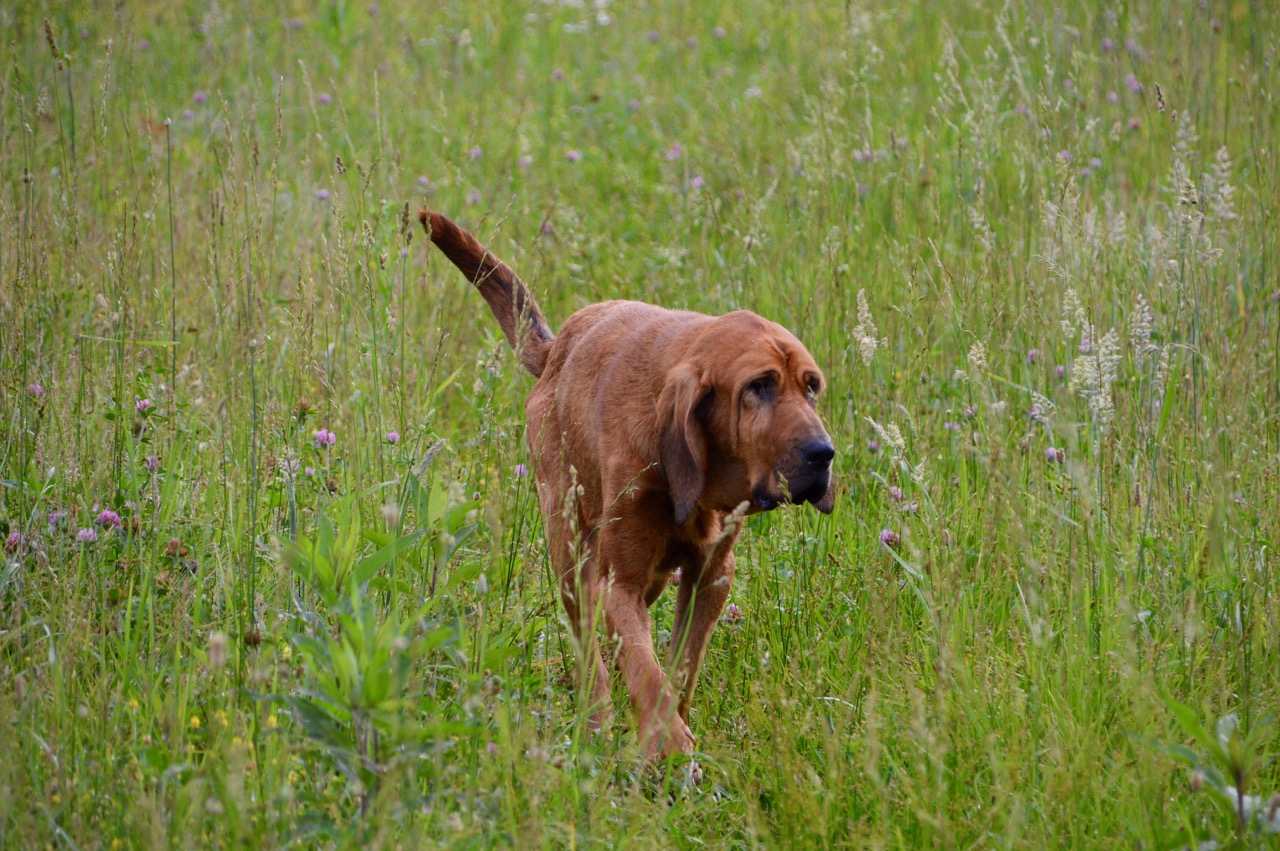 As it turned out, we had not started the morning walk yet. I am not sure how the hounds would have reacted to something that loud and strange. Had I known the helo would be more exciting than the Indy500 I was going to watch later, I am not sure I would have tuned in. All I'll say is about the race ... I'm liked who won, there were too many yellow flags, it took too much time to watch, too many commercials again and a spectacular crash that without modern safety technology the driver would not have survived that crash in the past let alone 'walk away' from his crashed car as he did. 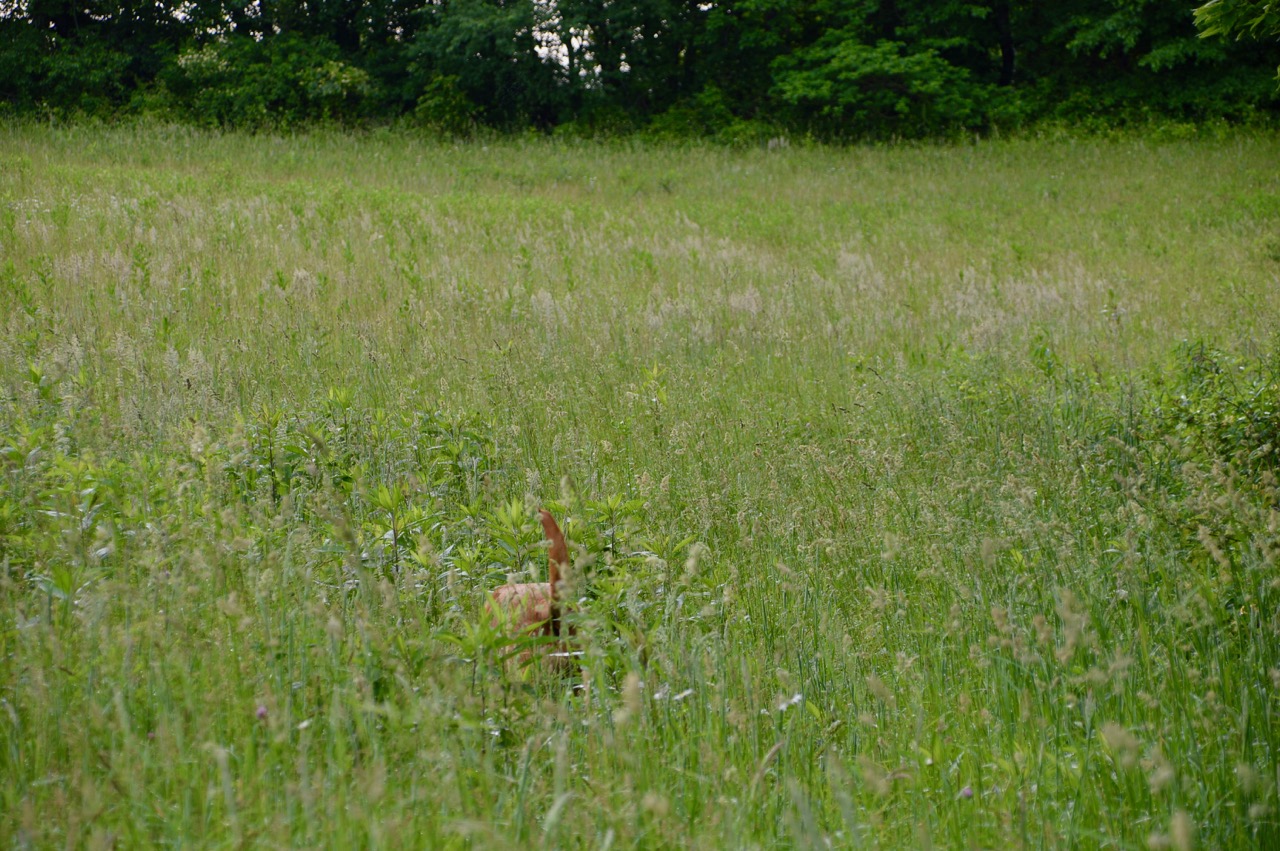 With it hotter than usual, more gnats and mosquitos, and the additional treat of plugged sinuses ... the walks for me were not that enjoyable. Sadie of course loved them and demanded 3 per day. Stella is stuck in the gear for low energy but managed to make it through them at her pace. 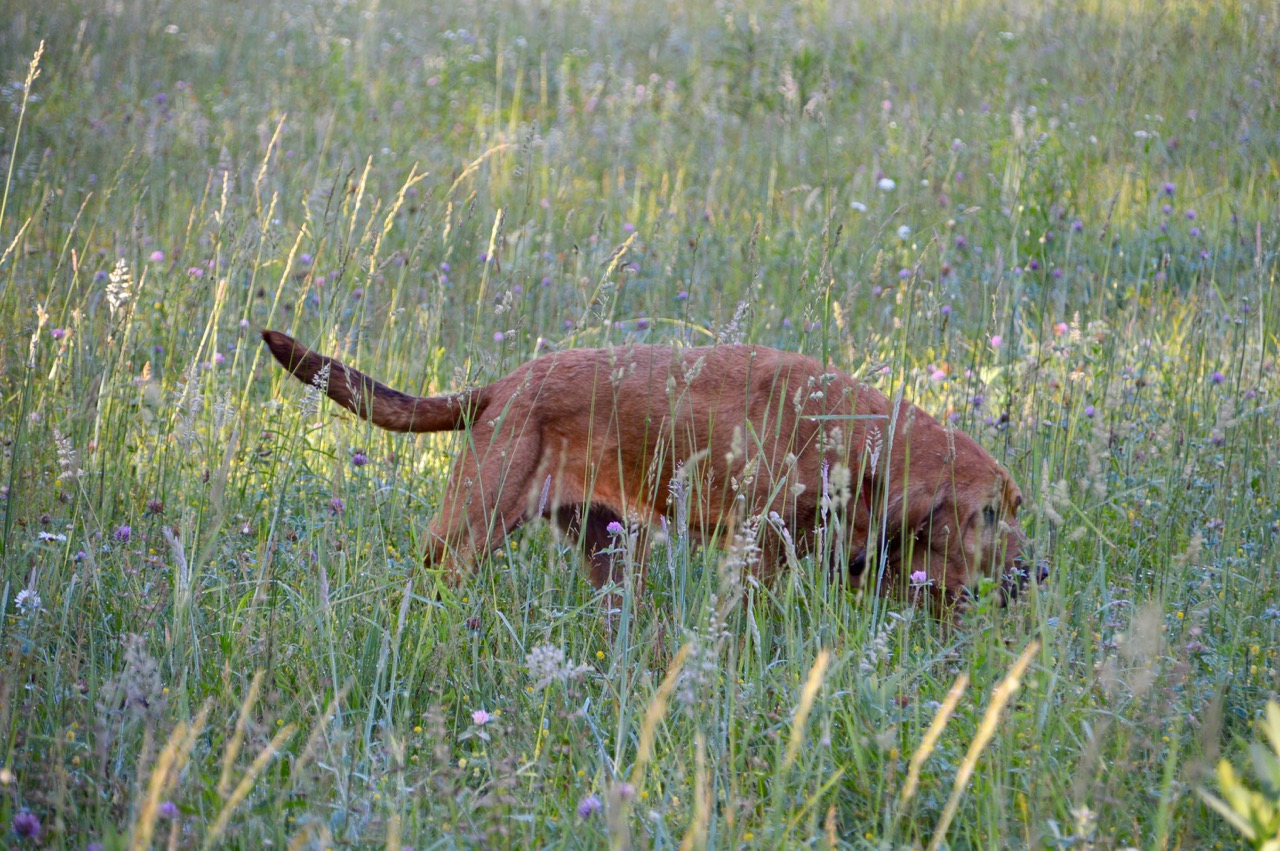 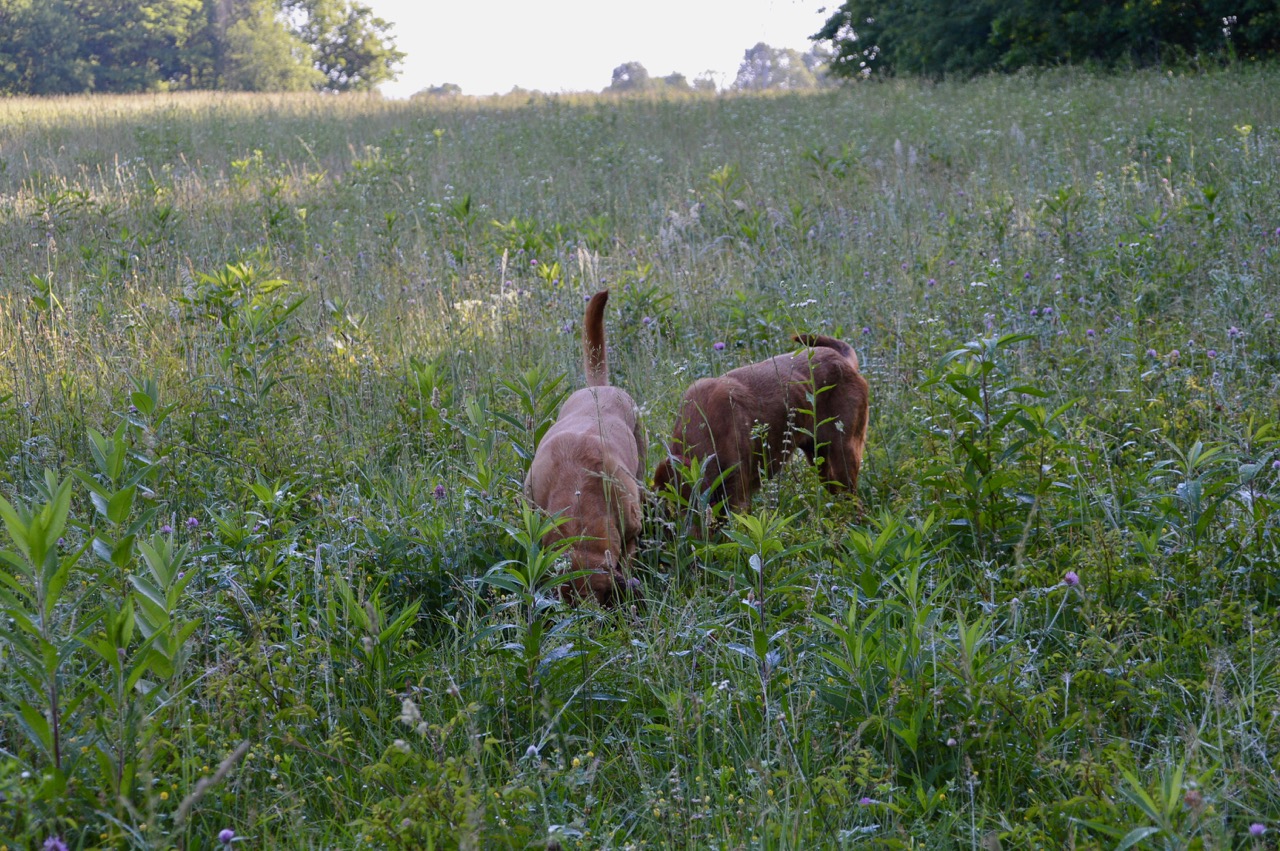 Monday was so quiet inside and outside you could hear a pin drop. Very little to no traffic on a major US Highway. The heat, although not really that staggering hot, zapped the hounds where they spent most of their day sleeping inside. Heidi had not moved so long in her stretched out position on the couch I had to look close one time to see if she was still breathing. She slept for hours in one position. 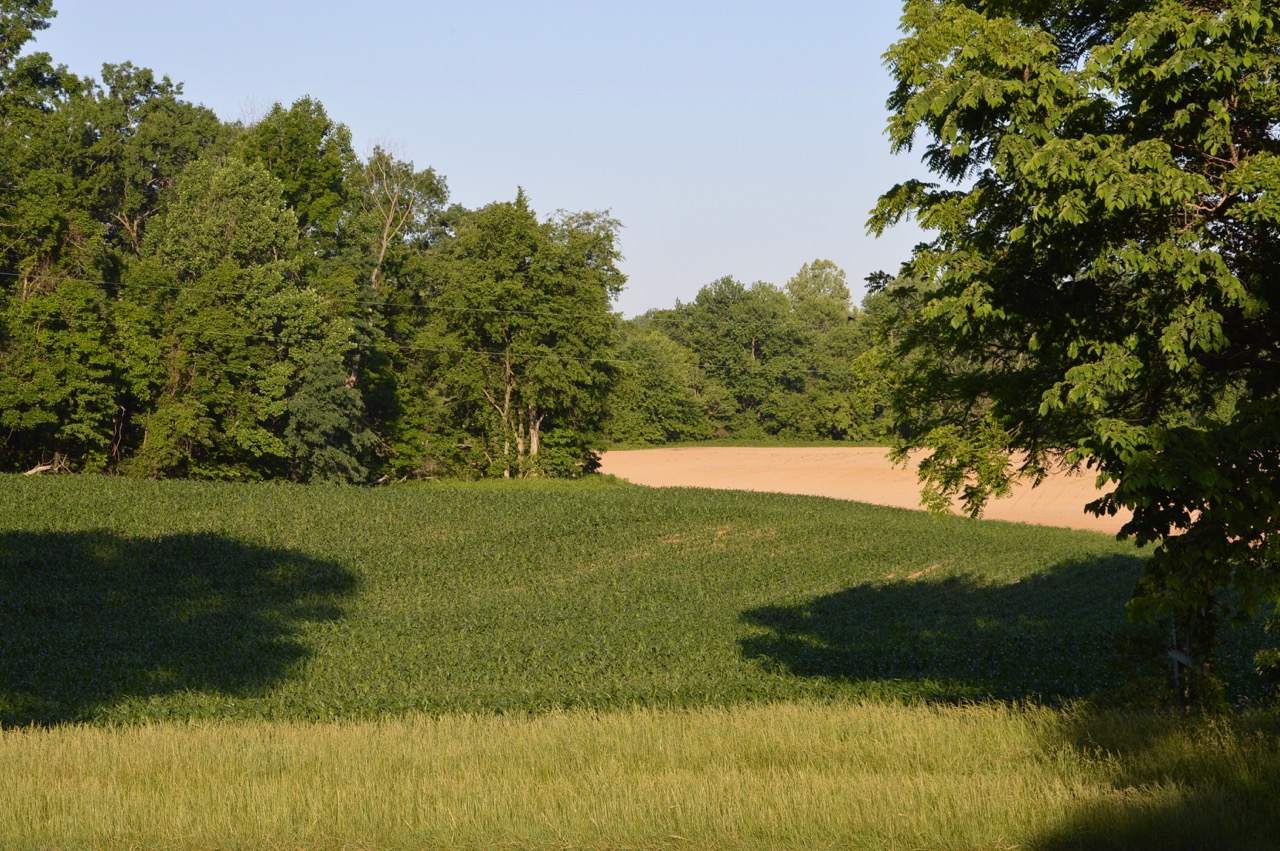 I use to put this view of the field across the highway as my 'starter' picture for the blog everyday. I included it this morning because I found the different shades of green to be interesting, along with the freshly planted field behind it. You can see the reason why they replanted part of the field in the post before this one.

You have the taller grass along the highway that will eventually be mowed by the state highway department if not the local field owner. That turns into the deep green of the corn growing, somewhere around a month old, then the dried out light brown of the dirt they cleared on Saturday which was all under water a few weeks ago. 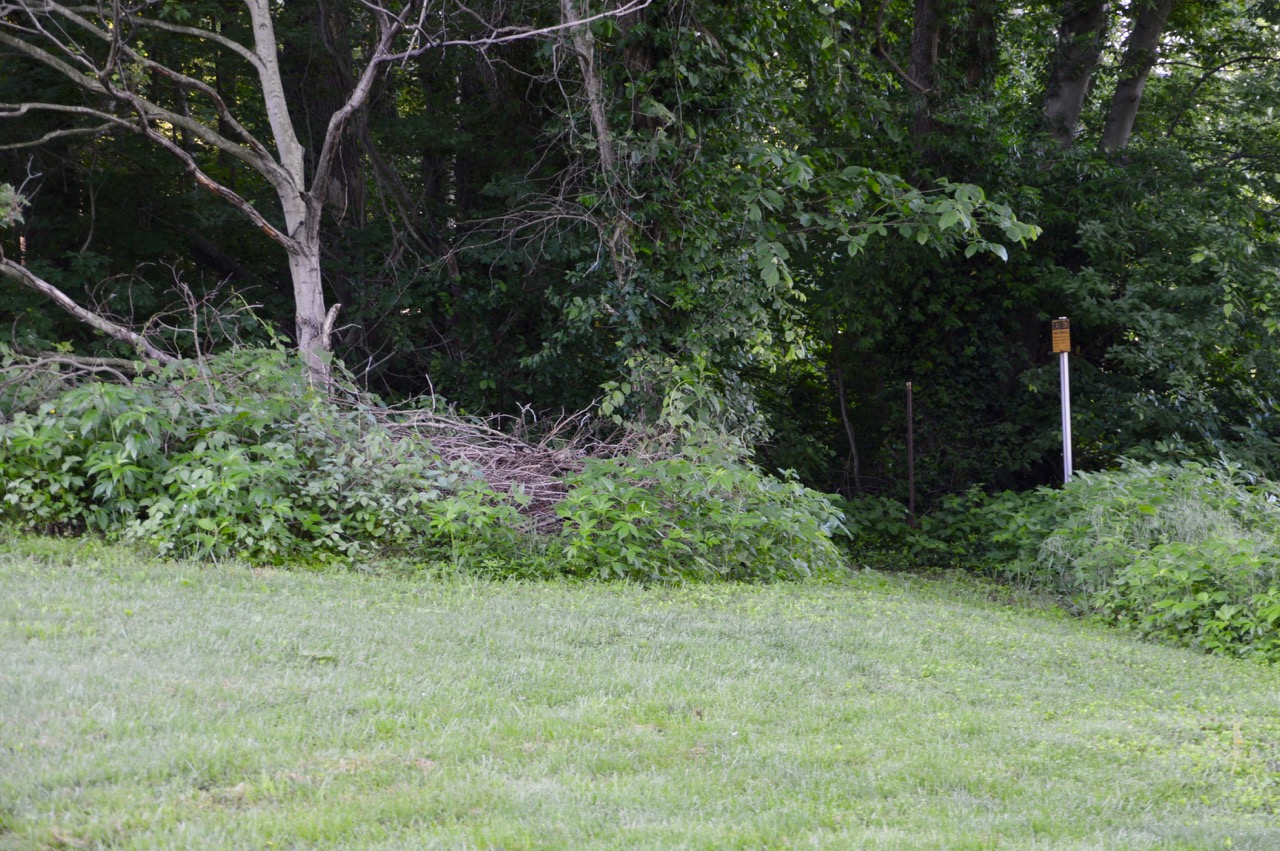 As the wild ragweed surrounds and covers my burn pile for next fall, I decide to mow back to that pole some say is my property line. 70 some years ago my driveway continued down that direction as a one lane brick road where they could bring their farm equipment to work the field behind my house. From what I was told that equipment was a team of mules and a row of plow blades. There are a lot of fallen trees back in that woods. 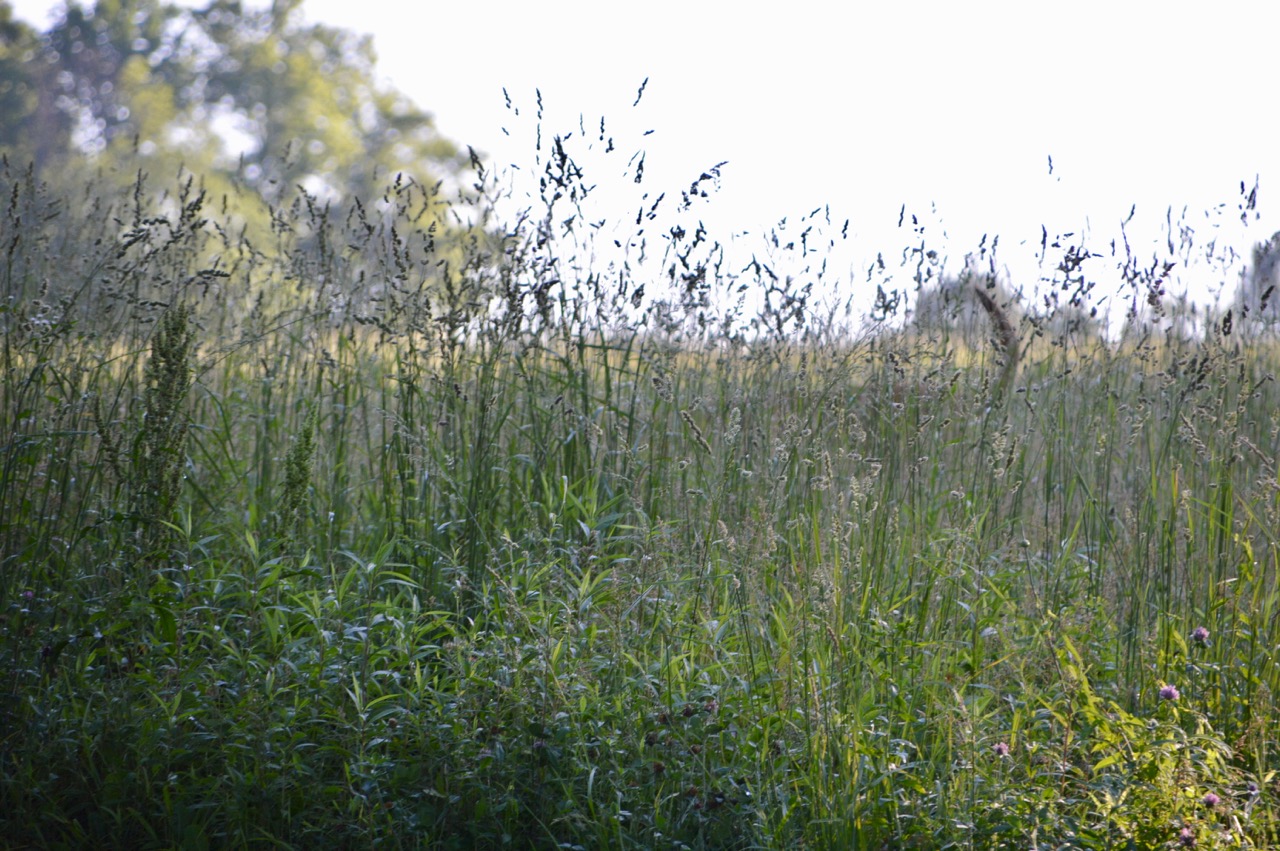 Even though this Tuesday felt like a Monday when we got up, it was the same routine I have written about before. When Sadie wasn't at the door looking to come inside as I poured my first cup of coffee, I decided I needed to go outside and see if I could find her. I didn't see anything that was tanish/red walking through the taller field.

Then right at the end of my search, I saw her tail moving in the tall hay. 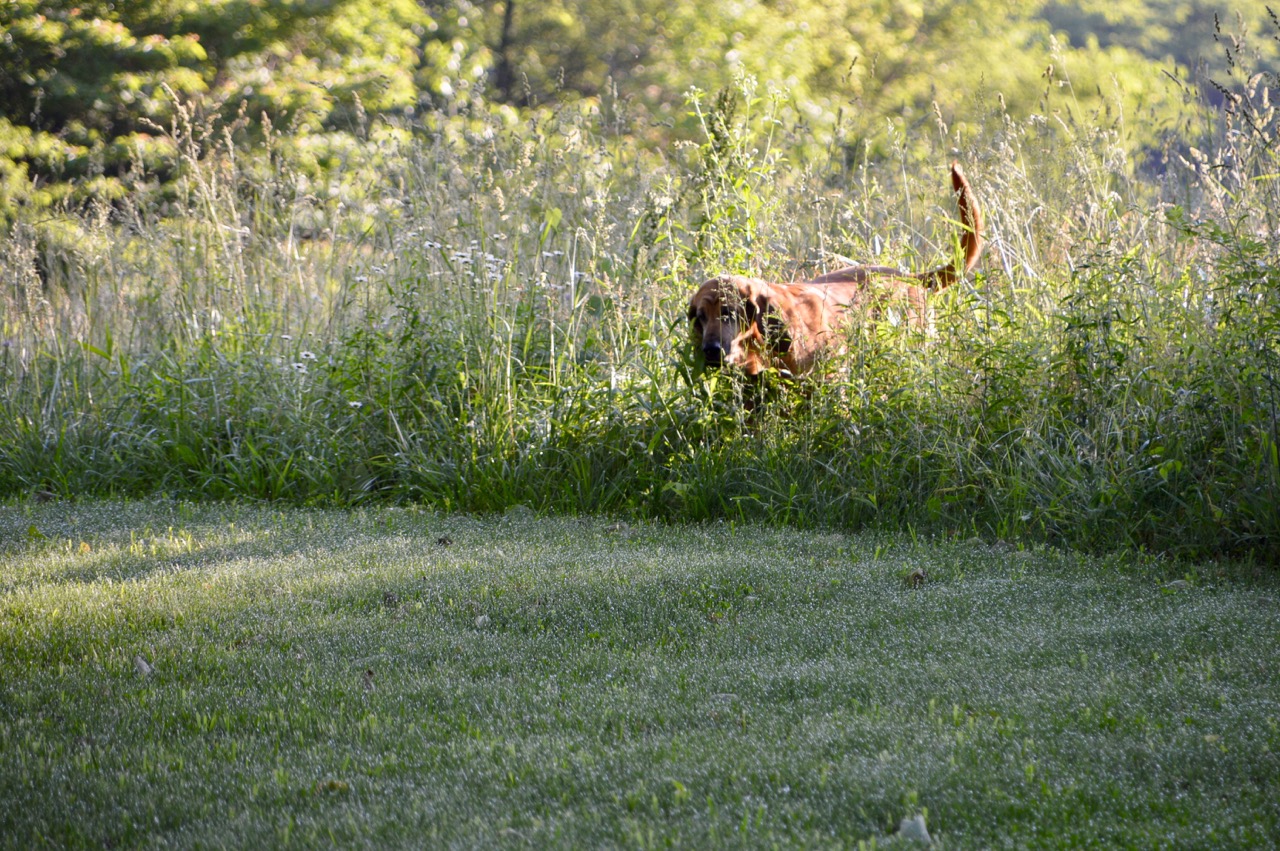 I don't know if she was tracking the black cat's path backwards but once she arrived in the yard she had locked on the scent. It was confirmed in the middle of the night fairly close in this vicinity, the black cat is what Sadie smells. I didn't get up to see it last night in the early morning hours, but I heard one of the biggest cat fights in the middle of the night and loud enough it seemed to be right outside the window. 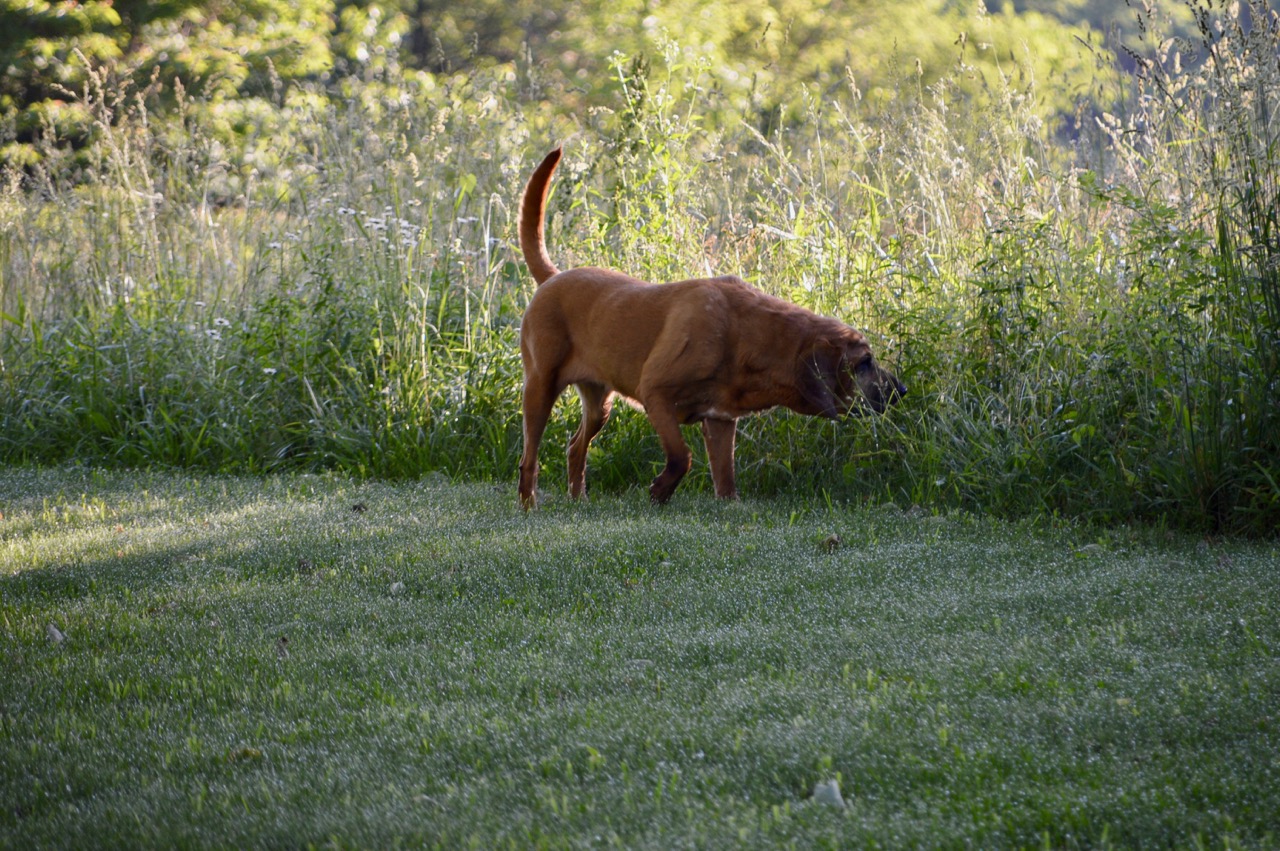 At least the cats keep the mice away. Sadie only goes on this search in this area the first thing in the morning. Other times we are outside, the only time she had gone in this area is if I walk over there. With the shade, it's the best part of the yard. 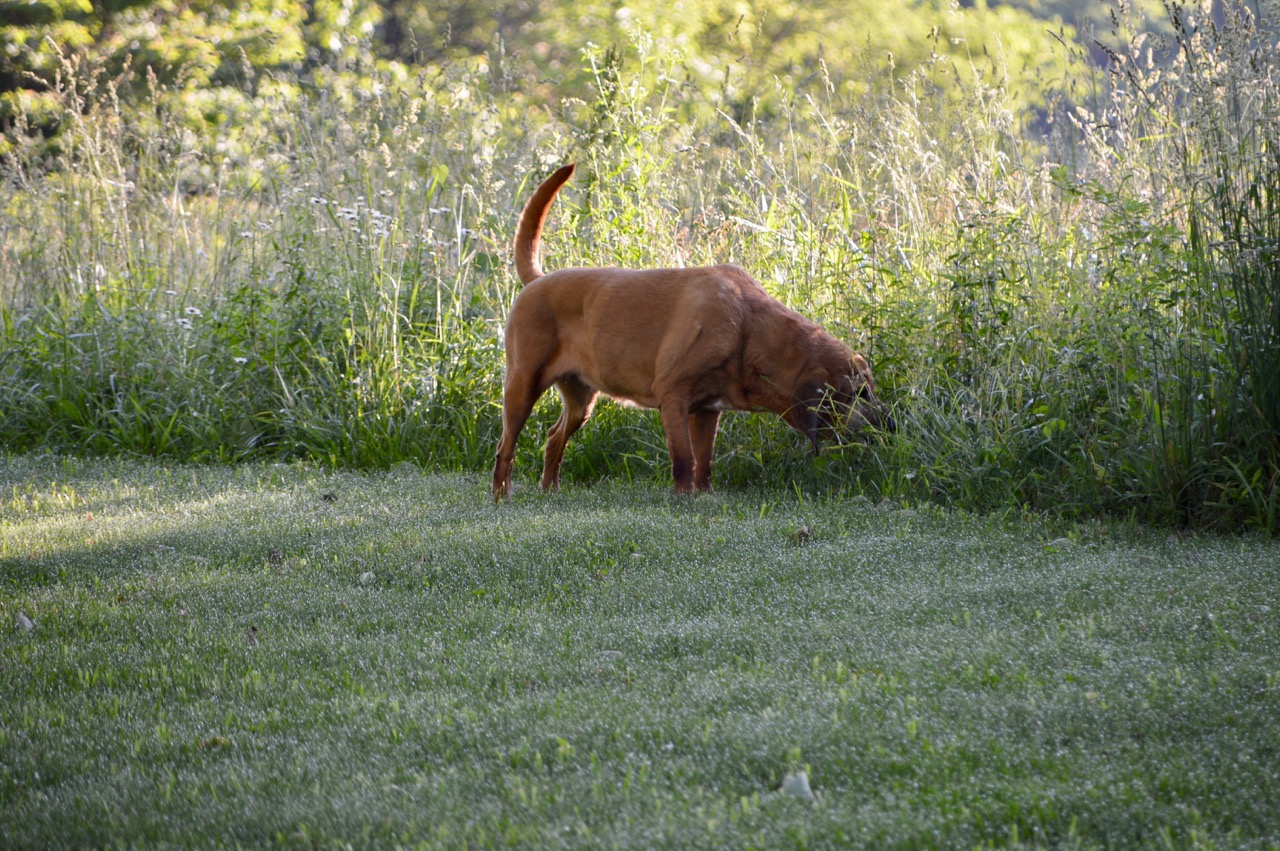 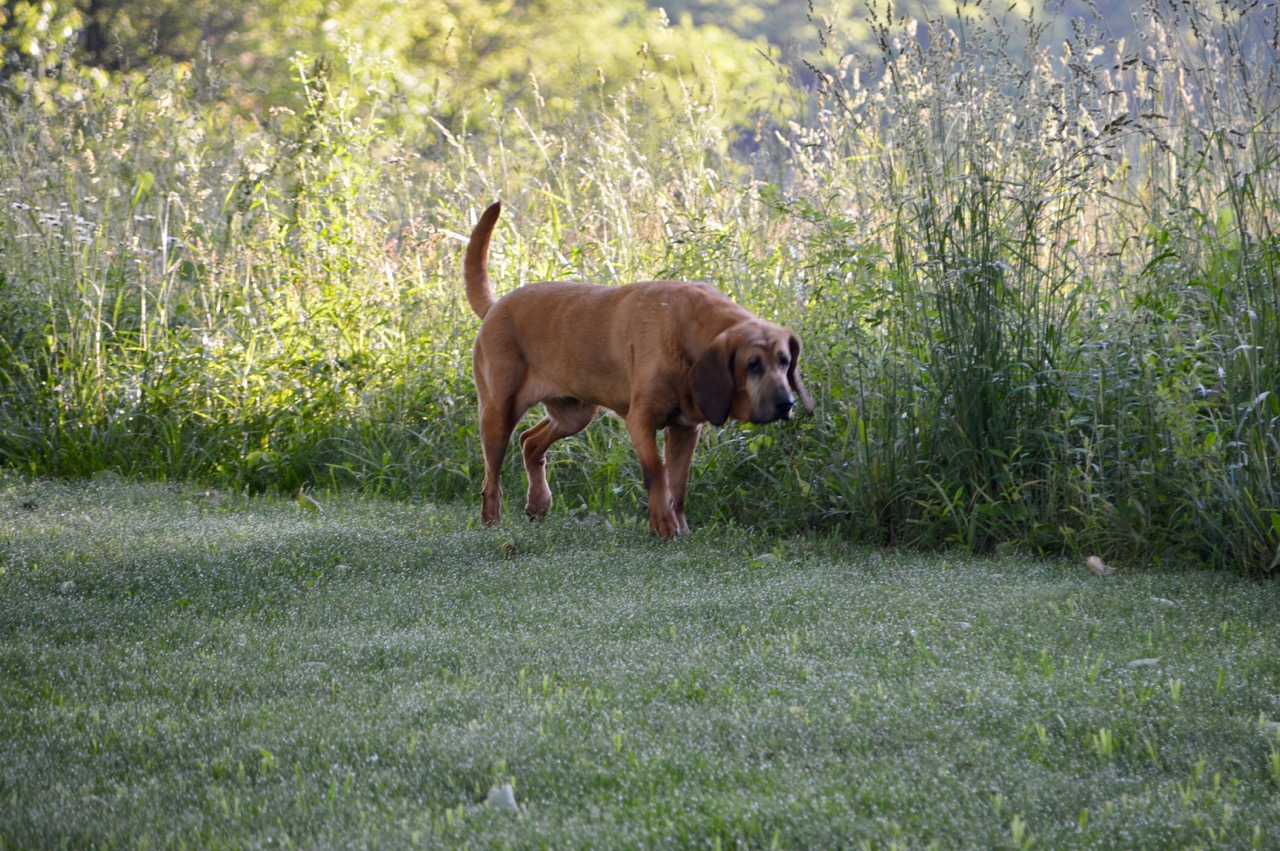 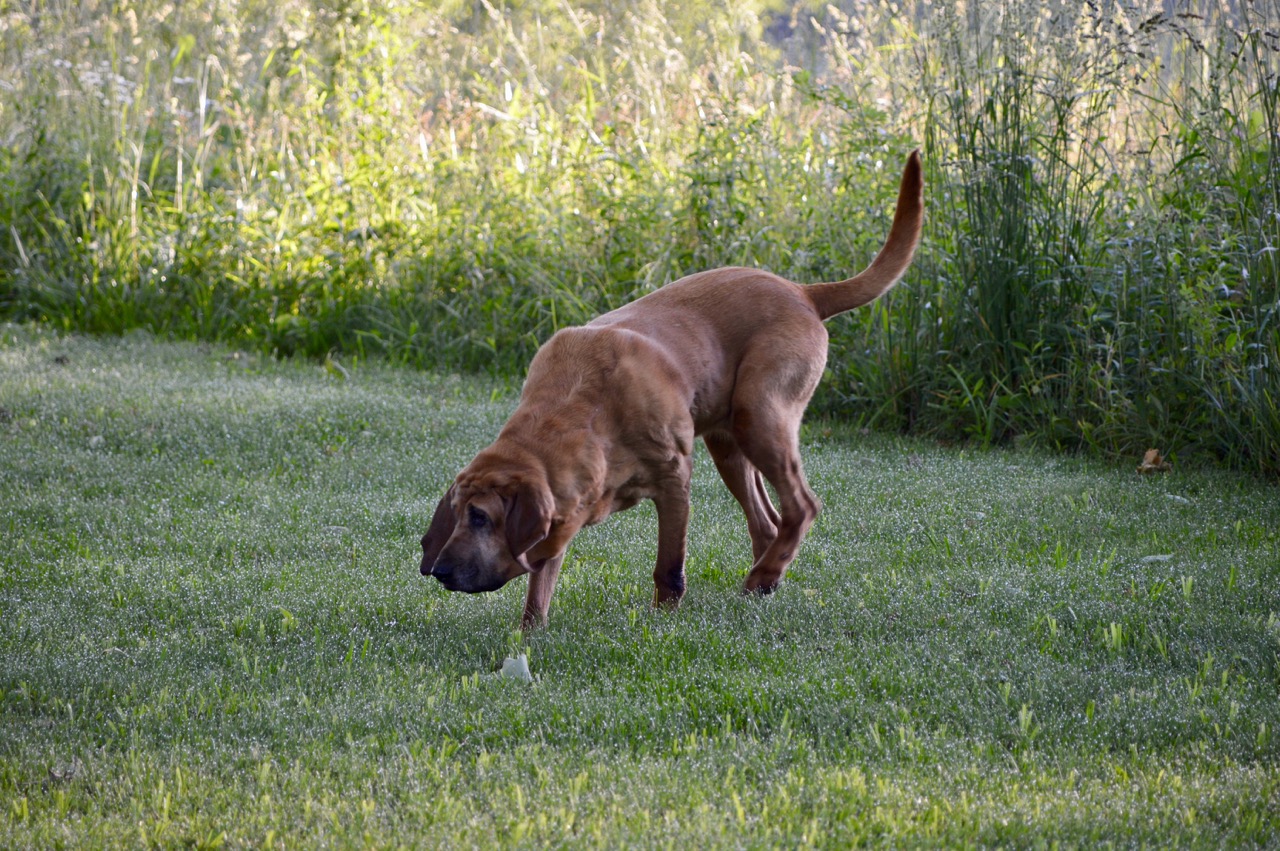 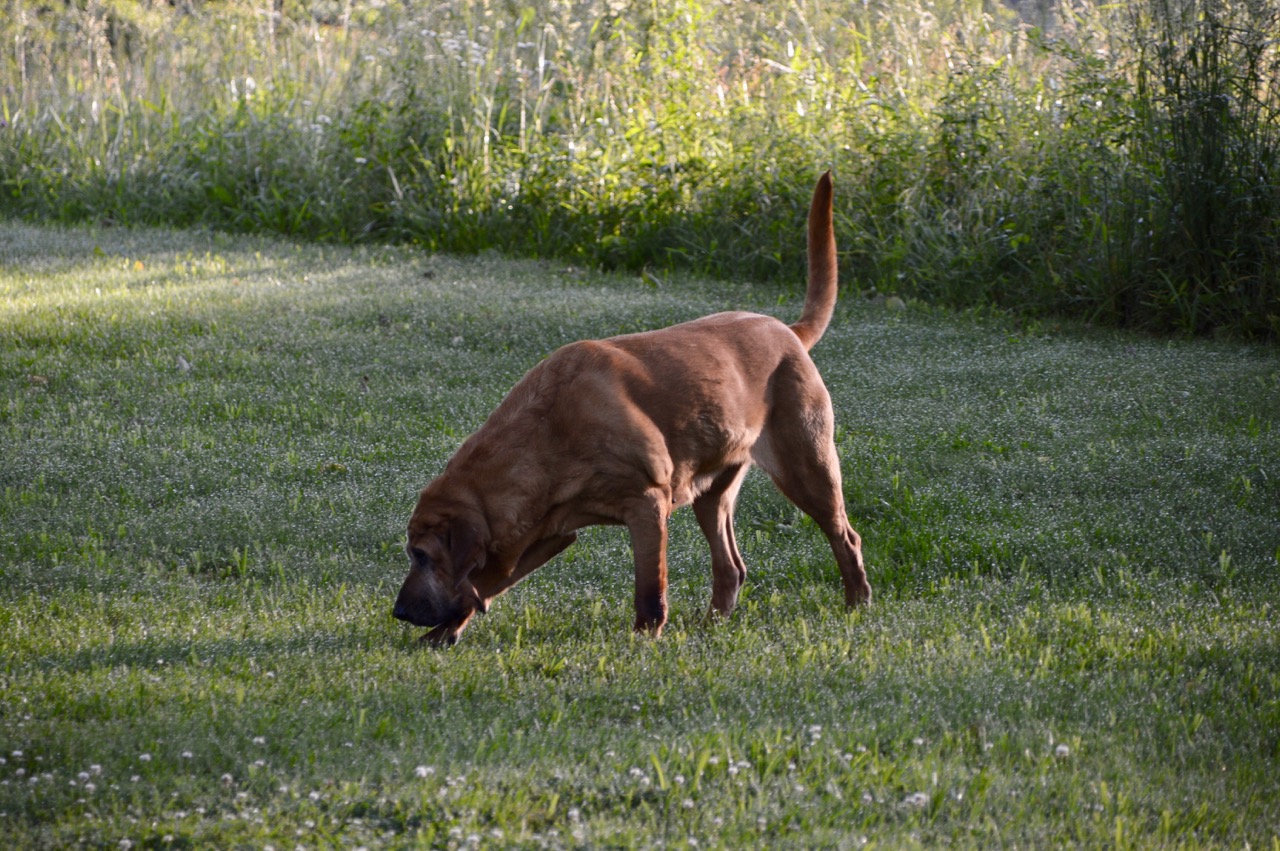 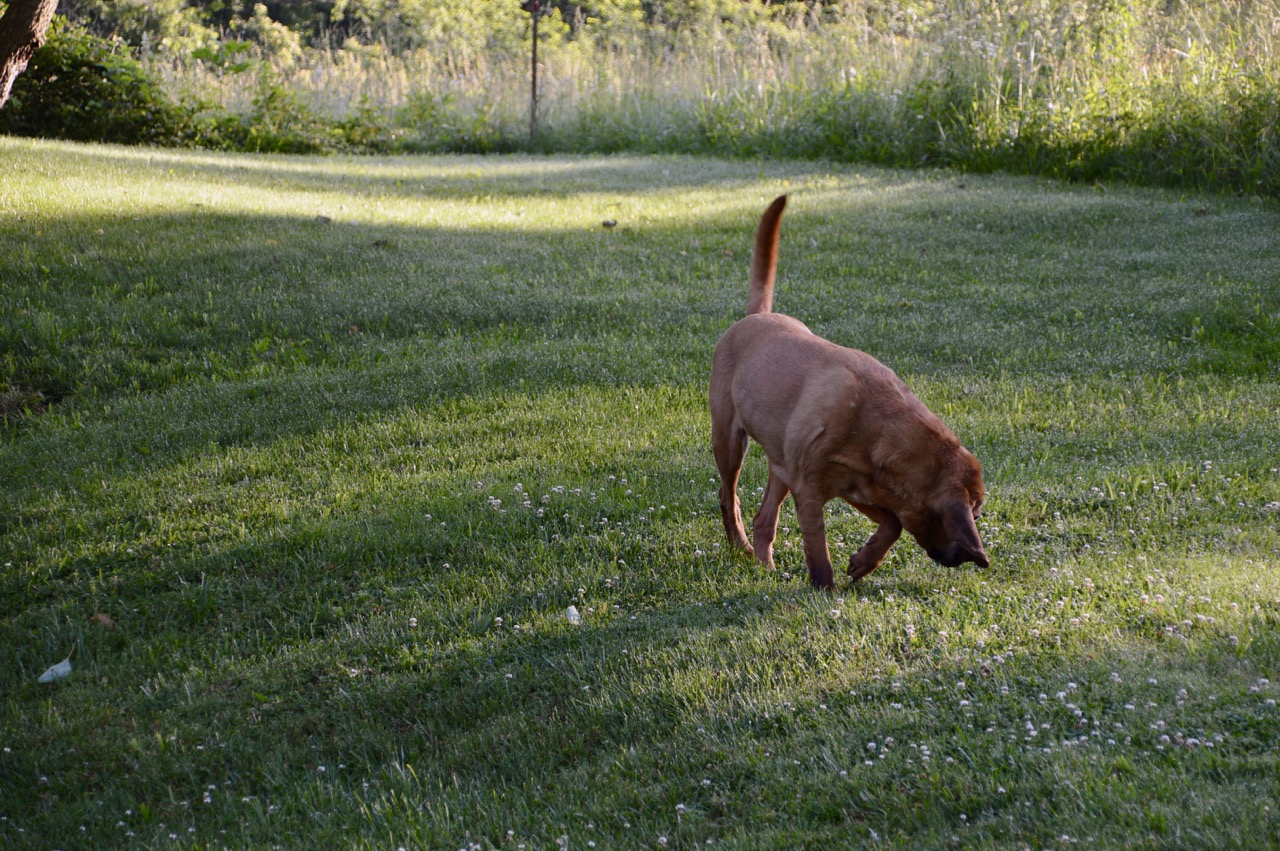 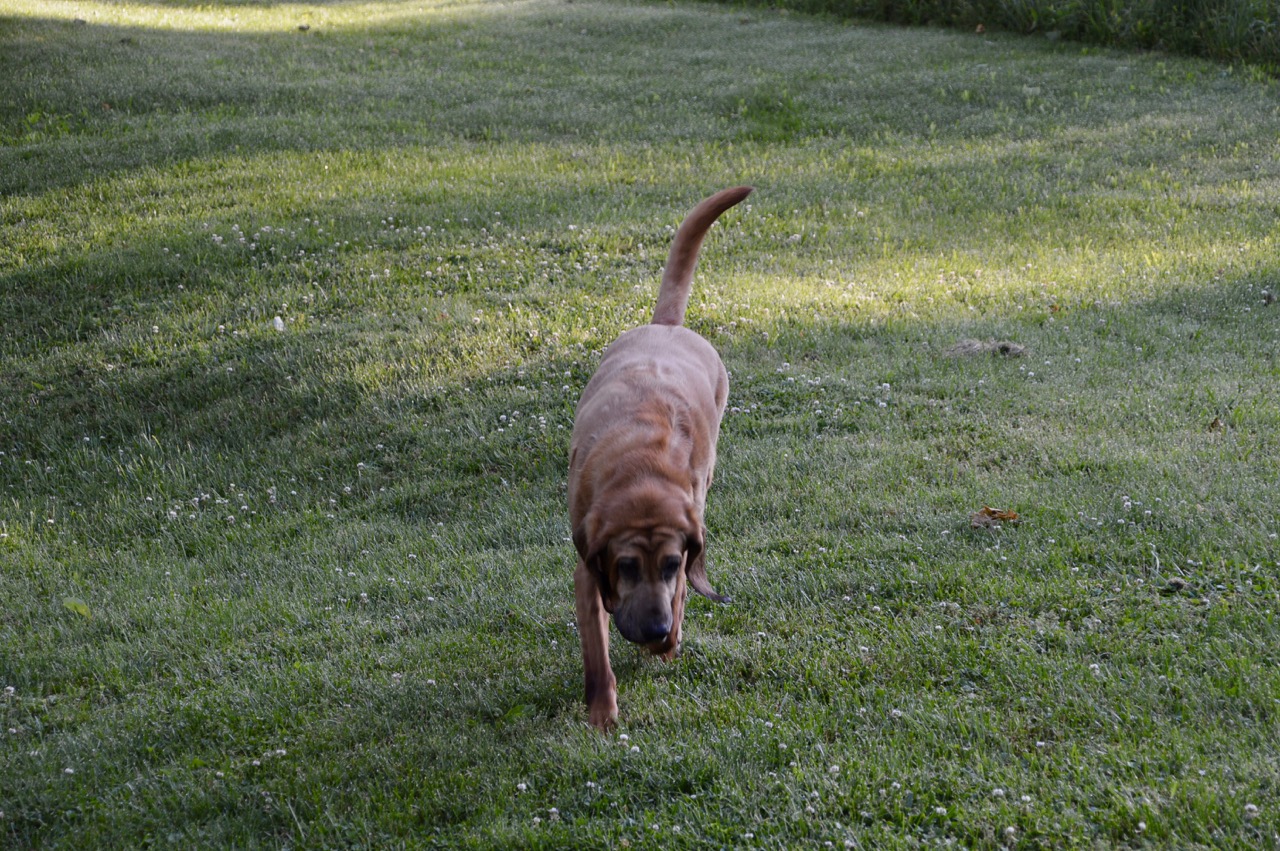 She finally decided that was all the time she had for the search. It was time for her short nap until our morning walk ... all have been quite wet lately and I've had to wear my snow boots to keep my feet dry.

With the cooler temps forecasted, it would be a good day to high pressure wash the fence, the house and carport. It will be interesting to see if I can produce enough motivation to get that finished today. Yesterday I got everything I wanted to do finished, so I have a clean house, a clean kitchen and two loads of laundry done.

Apples free app that came with my iPhone called "Reminders" does it's job well. All of those 'to do's' I am behind on show up in red print along with the number of them waiting for me to complete. they show up on all of my Apple devices so there is no way to escape.

I didn't wash the Mini last week because I thought it was going to rain on Sunday but I cannot use that excuse anymore. That might be the trigger to get me moving in the direction of the high pressure wash machine.

I have lived her a long time, almost 20 years, and it is amazing how a lot of things change while many stay the same. The weather is always changing yet the land and trees stay the same. This photo was taken October 2014 in one of the most colorful falls we have had in a while. 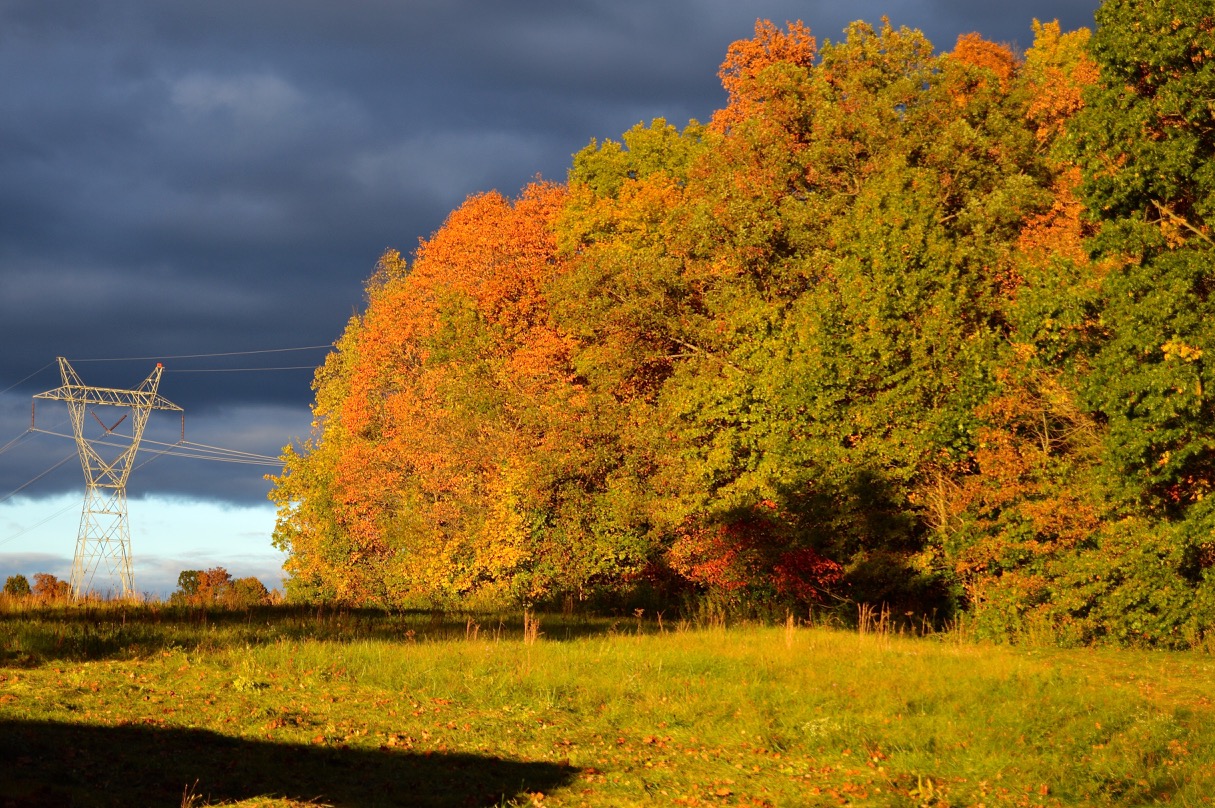 Sadie is telling me it's time for our first walk of the day here in 'the tropics' of Southern Indiana.
at May 30, 2017
Email ThisBlogThis!Share to TwitterShare to FacebookShare to Pinterest
Labels: Allergies, Helo, Indy500