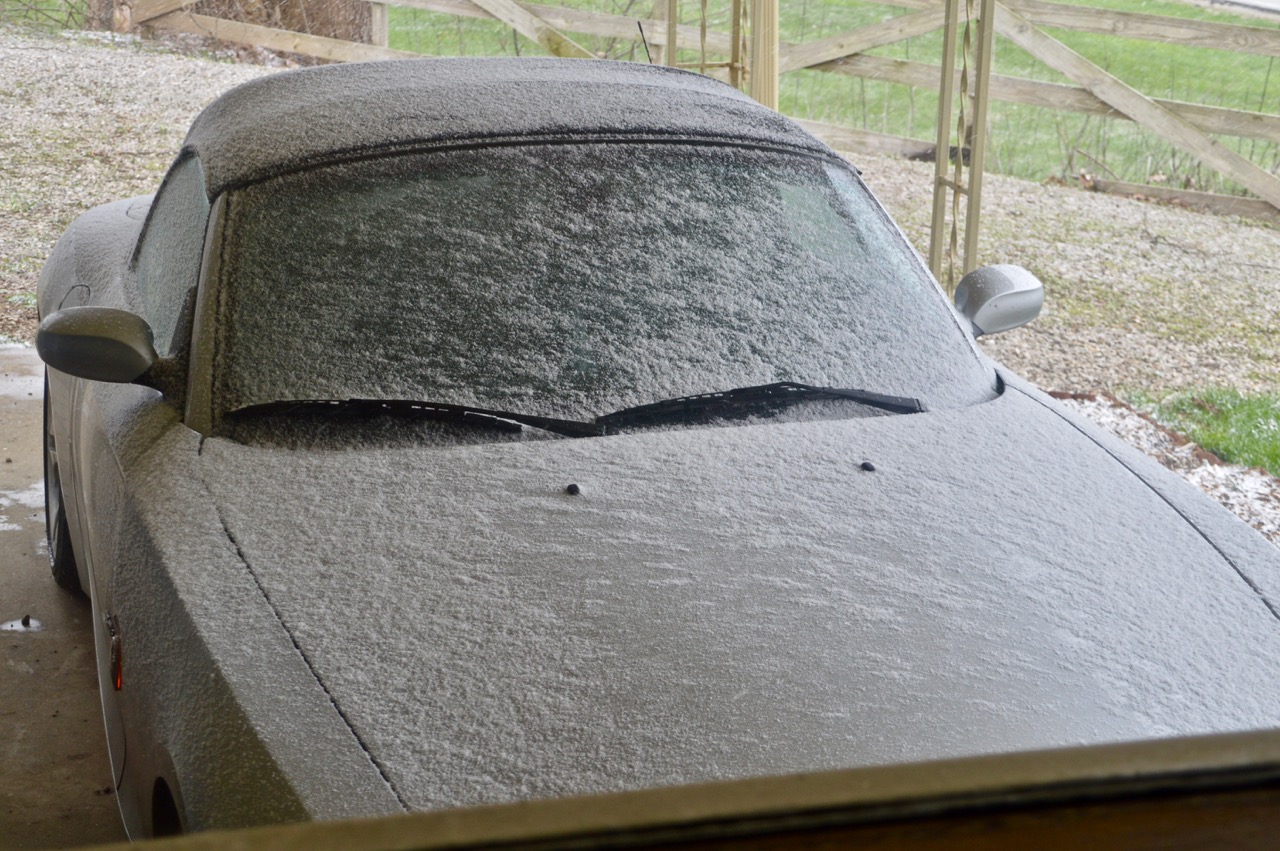 Since December this years weather has been nothing but strange, crazy, and wild. Since the Z4 was put away for the winter 'dirty' I didn't put it under it's car cover this year. I woke up to this picture today and could barely see some small snow flakes falling. April 16 ?? I can't do anything but laugh about it. I have a washer update later in the post. 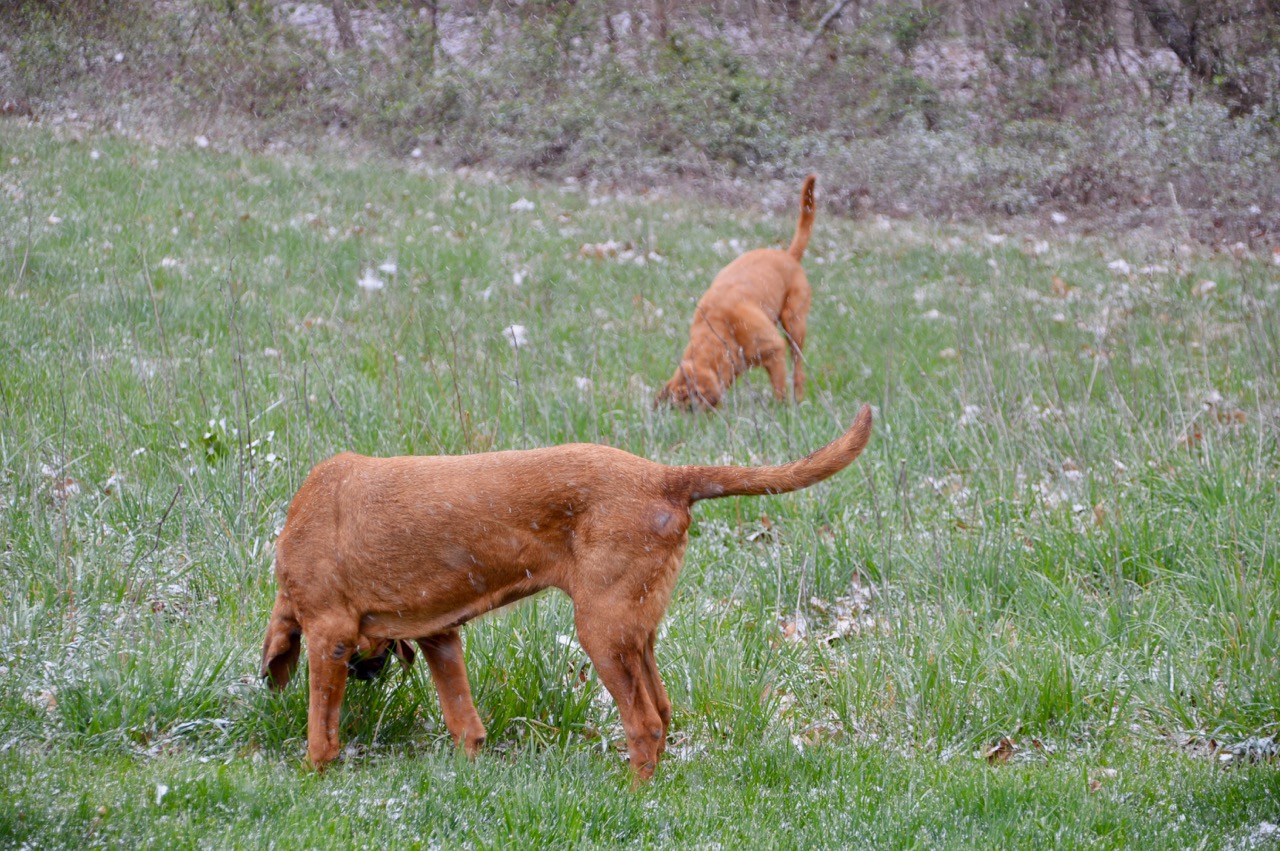 As always even a trace of snow energizes the hounds. About the time I clicked my first photo of them they both took off running way ahead of me. Even Stella was trotting a little faster than normal. 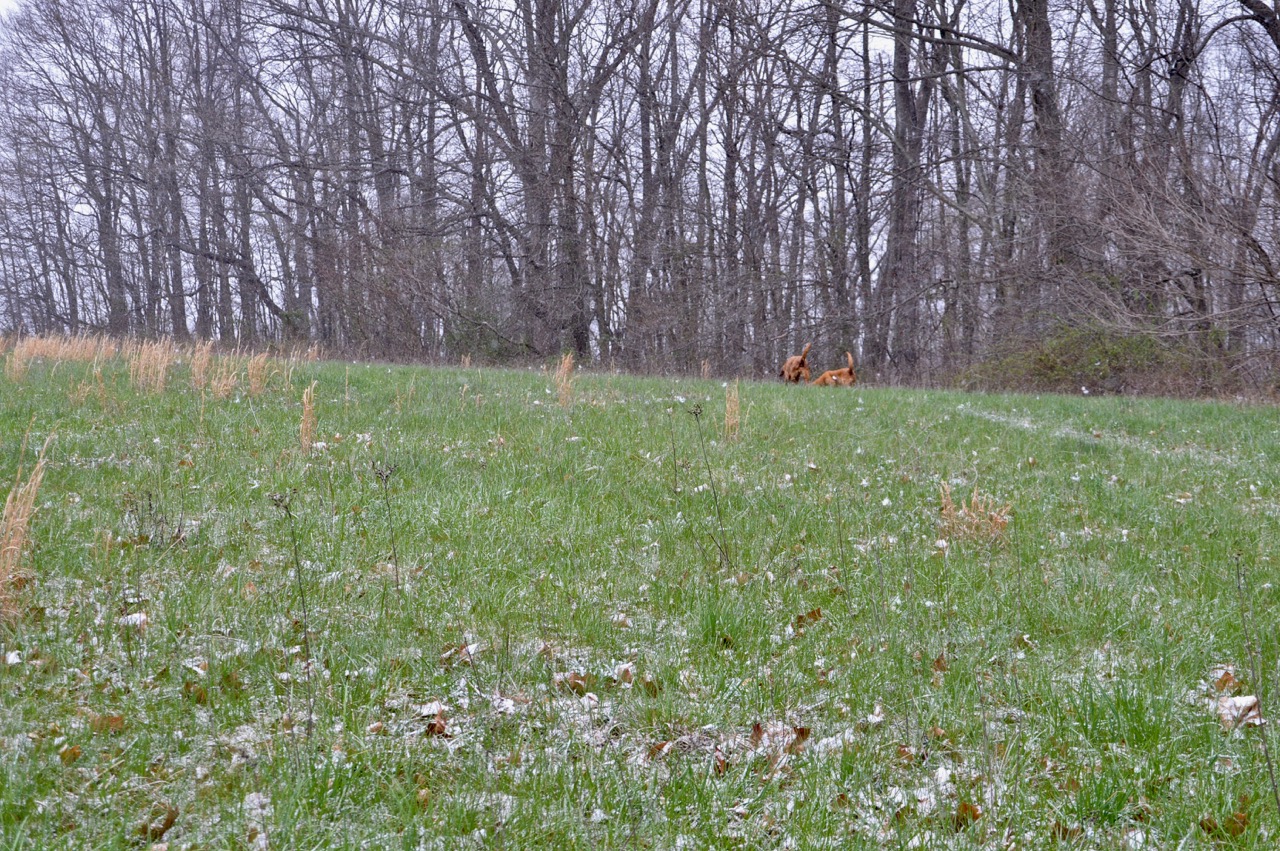 Either deer, rabbits or other night animals were really active last night because both hounds had noses to the ground and tails curled upward. They were intense in their exploration. 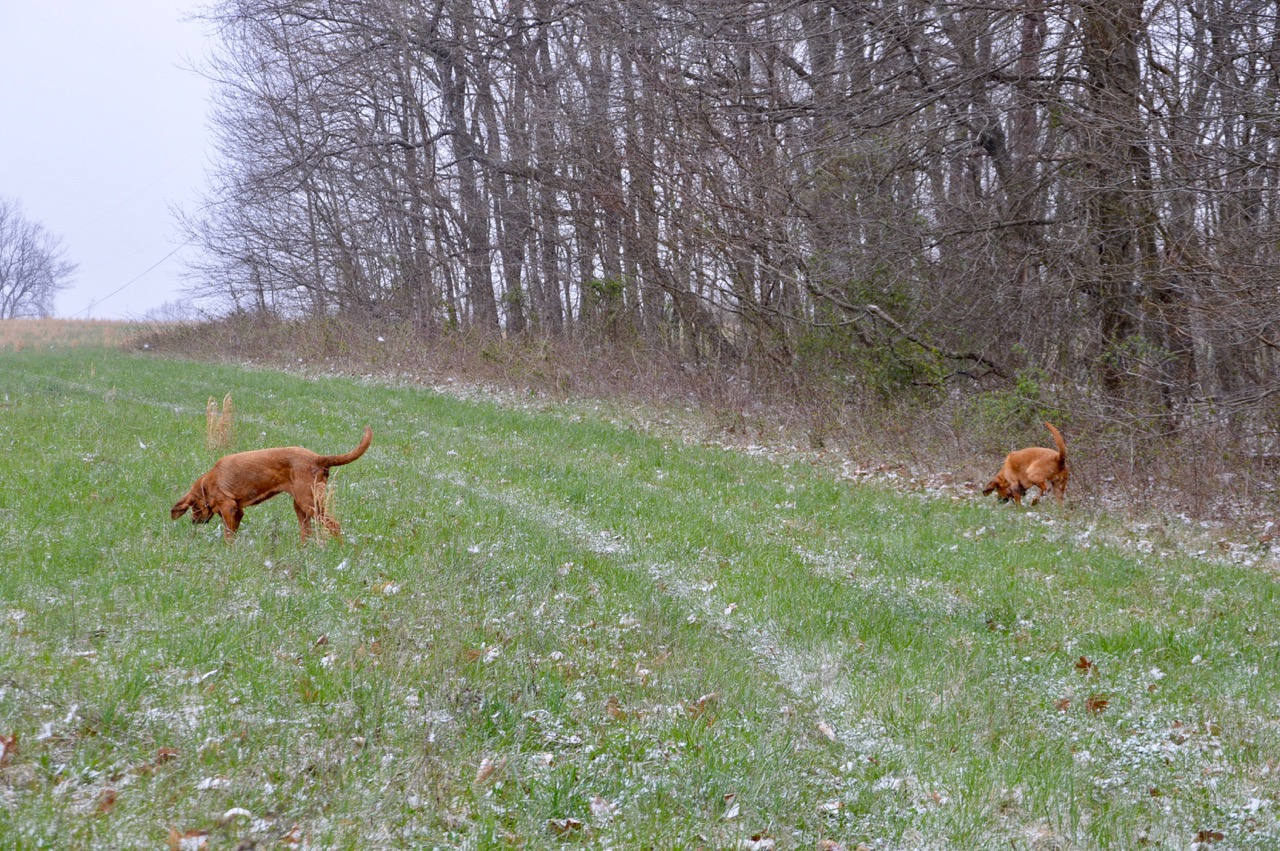 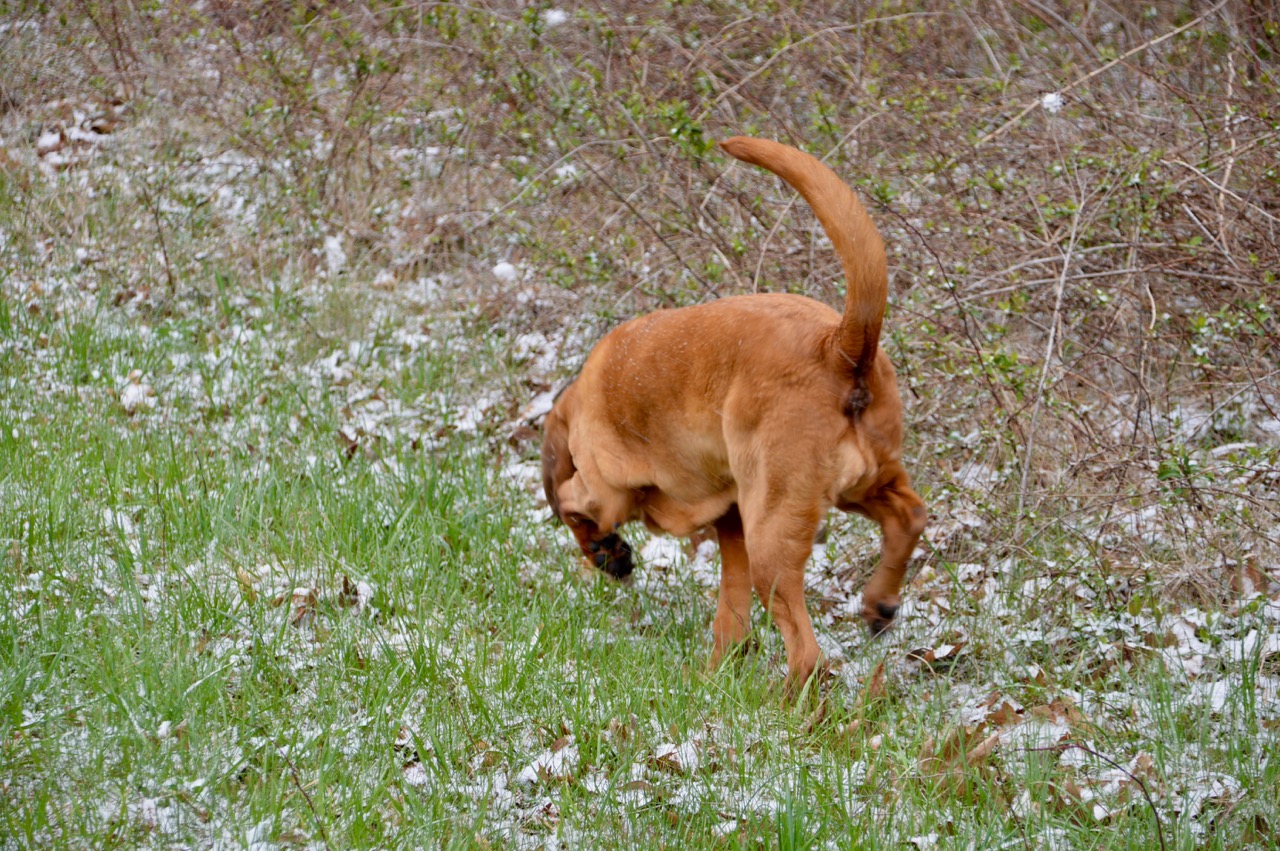 They went far enough into the thick brush, with new thorns, that I had to call and tell them to 'get out here' ... they knew what that meant. 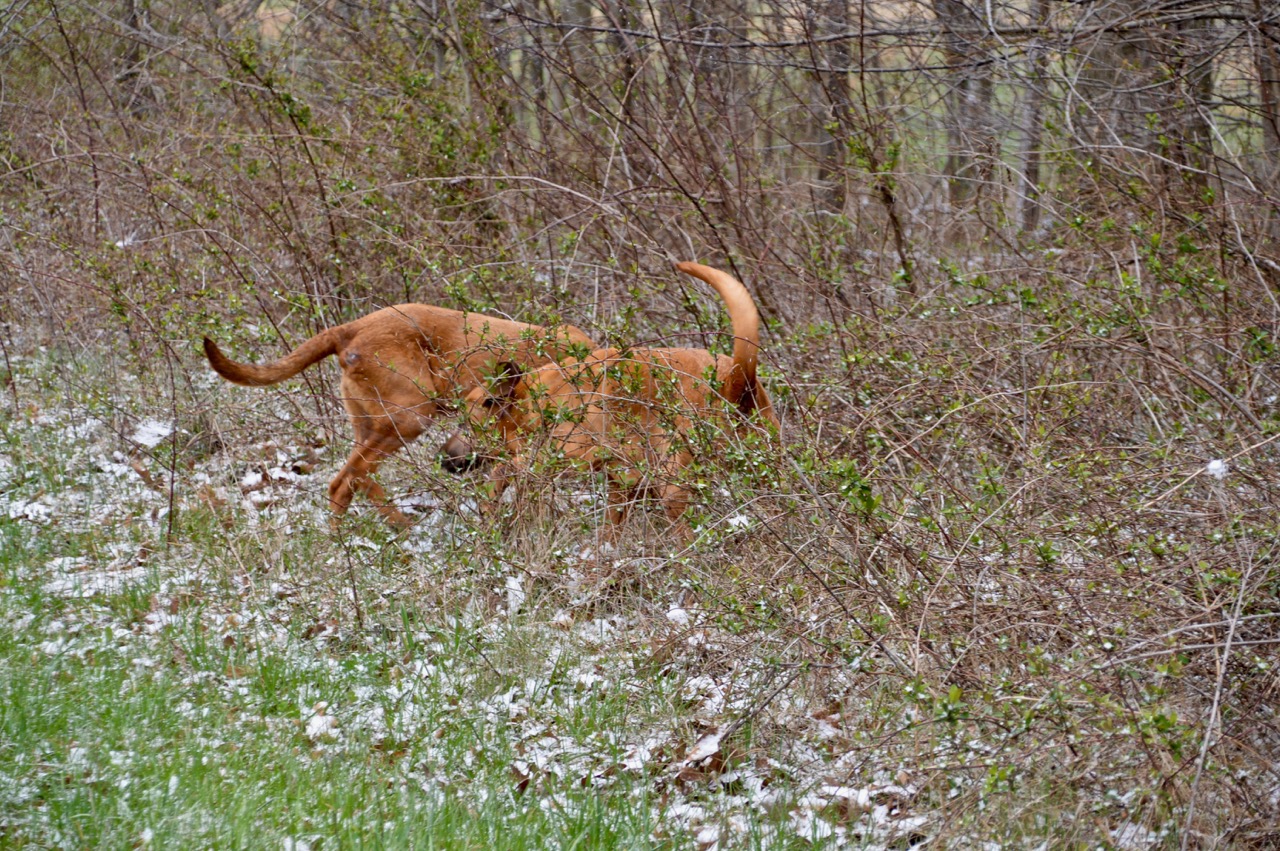 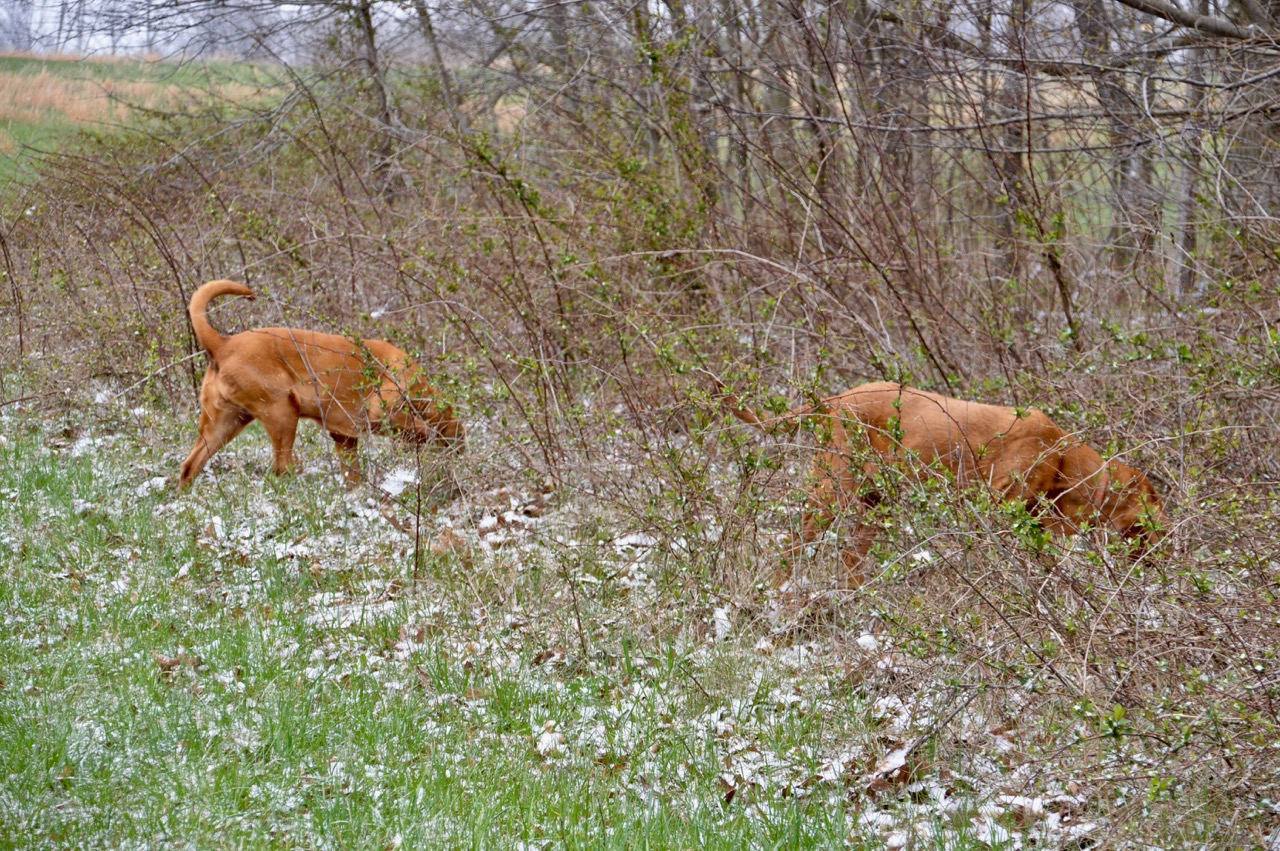 About the same time I almost caught up with them, they took off sprinting around the corner and moved to their next favorite spot. 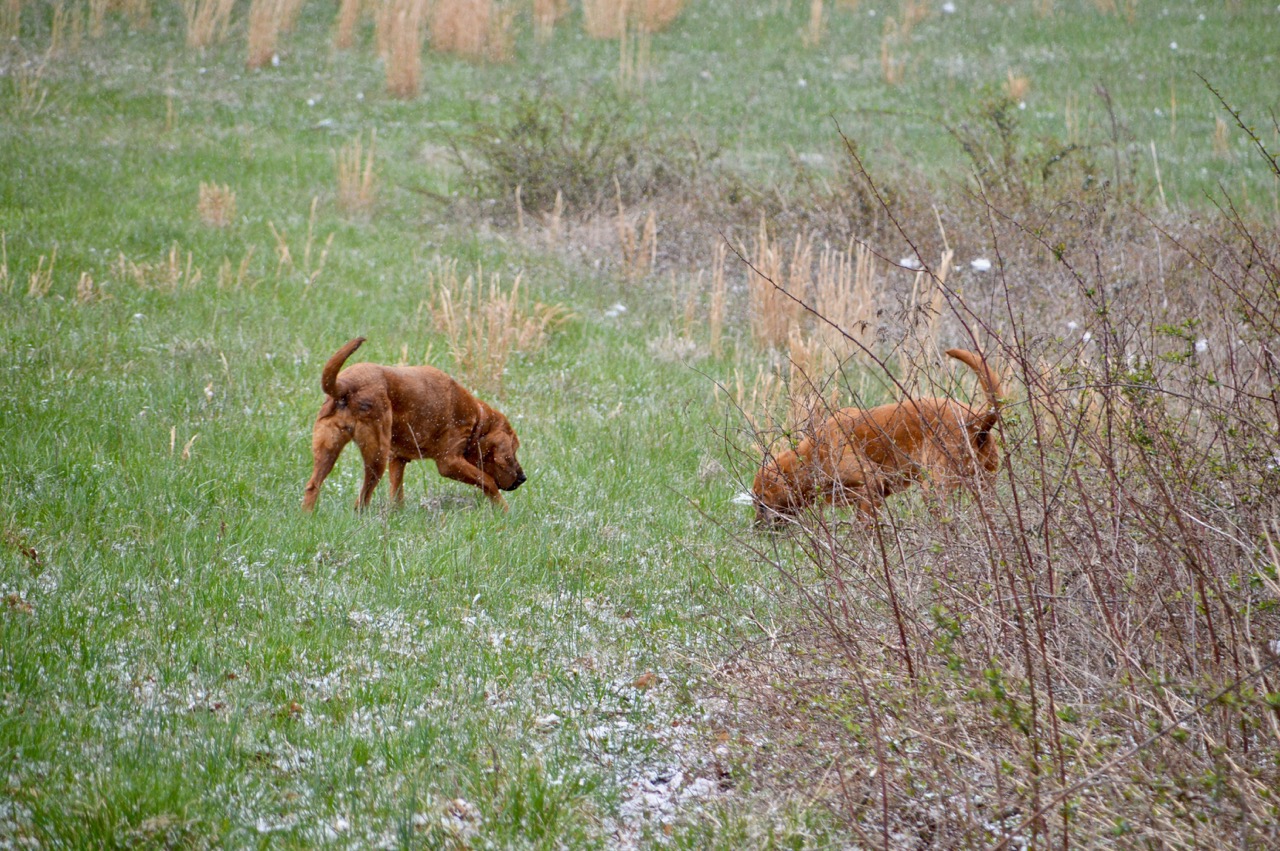 They repeated that again as I came close to them ... running far ahead of me. 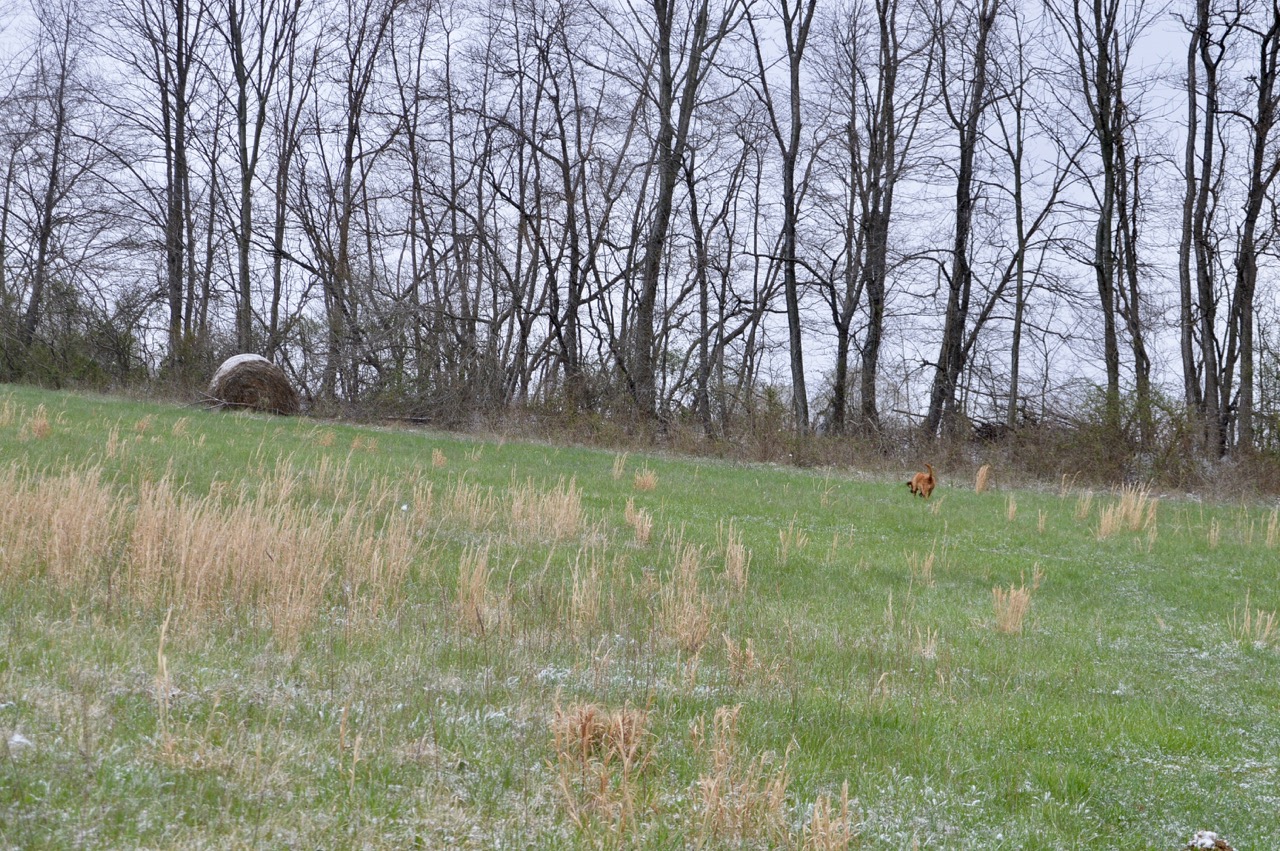 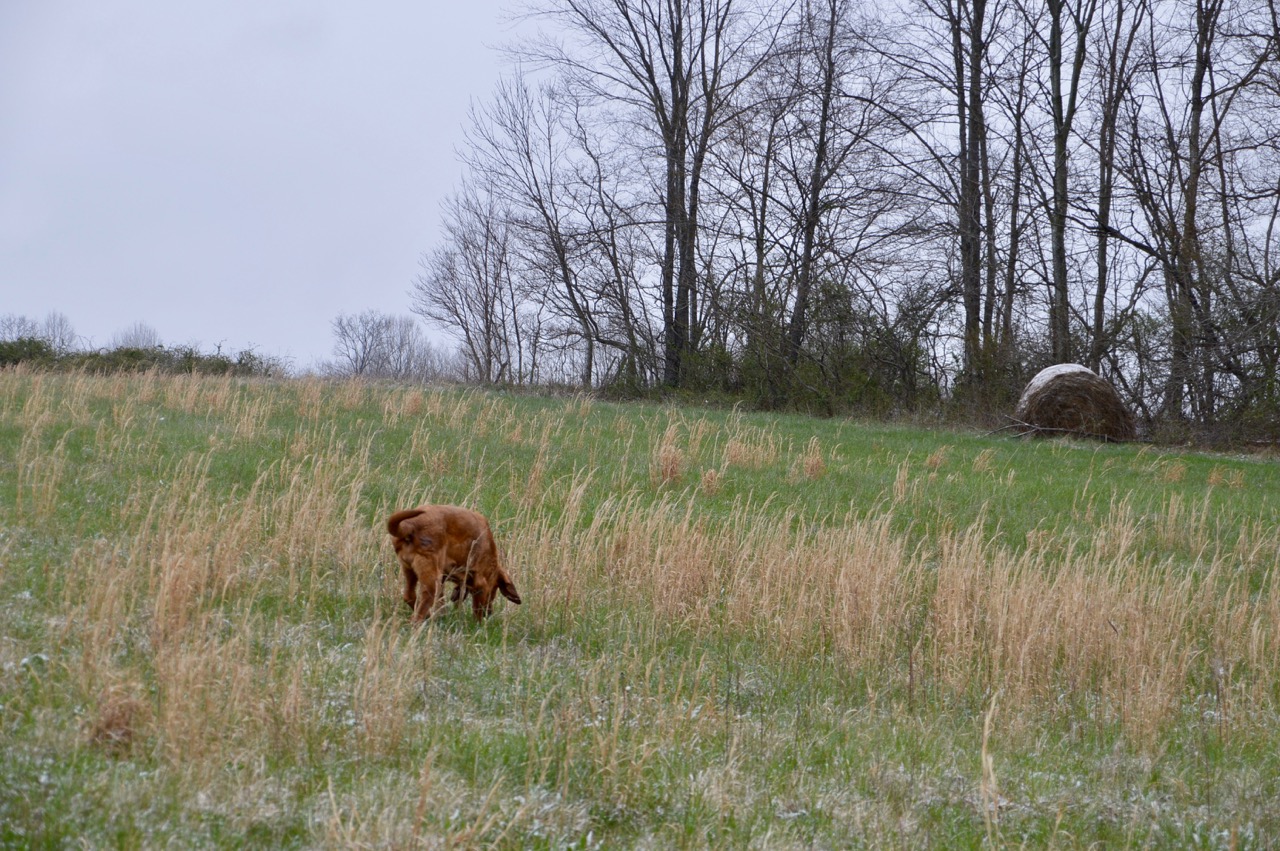 Sadie of course looked back to check on me, making sure I was still upright and had a pulse. She never wants me to get too far behind. 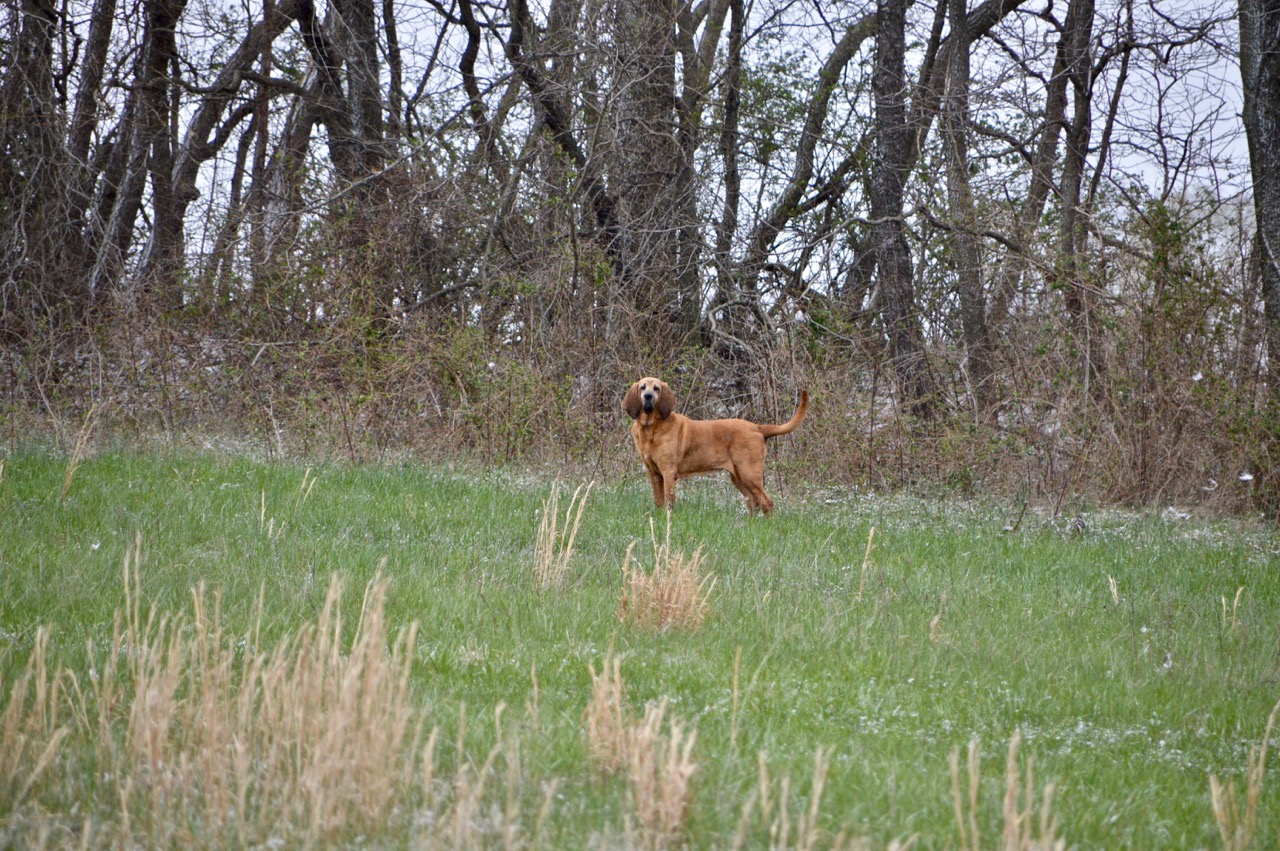 What was the scent they were going crazy over, running in different directions that the camera could not even pick up. 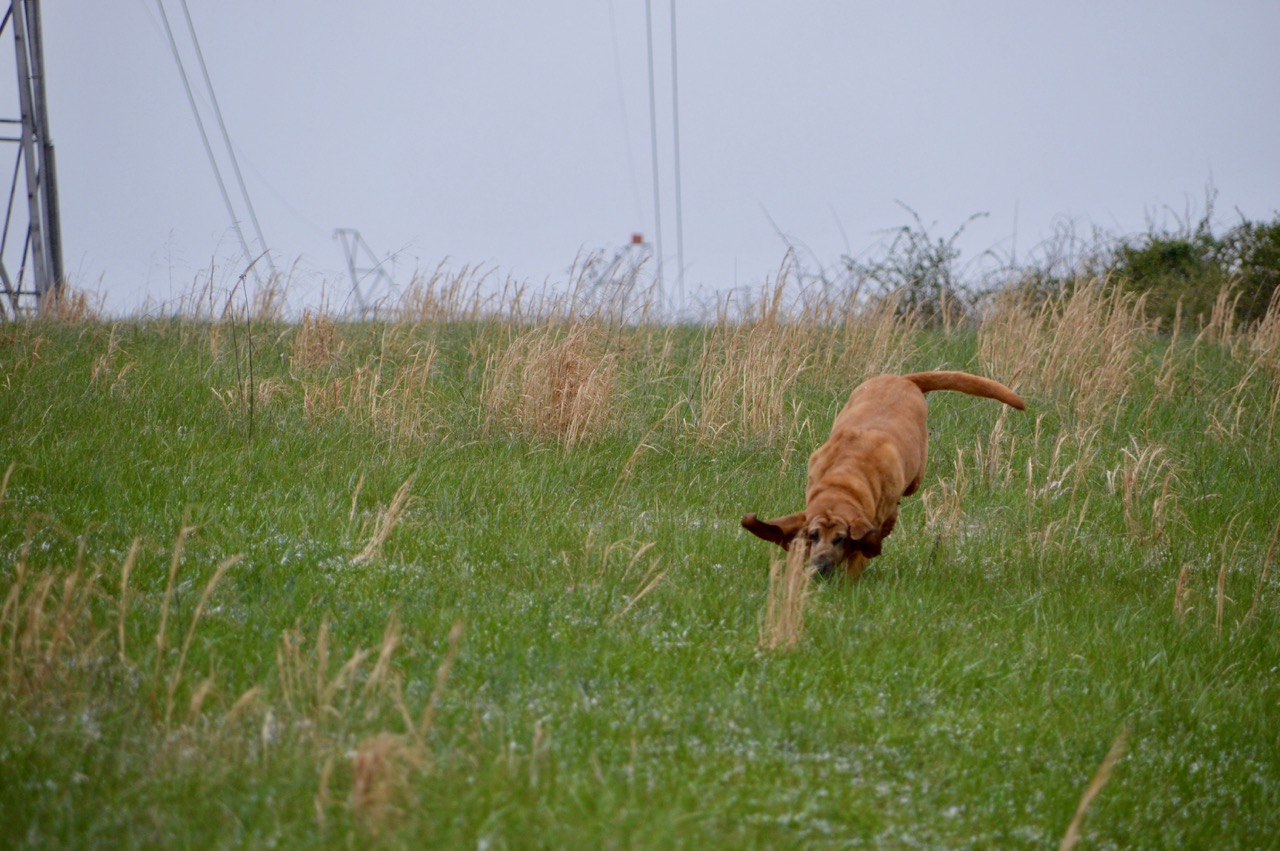 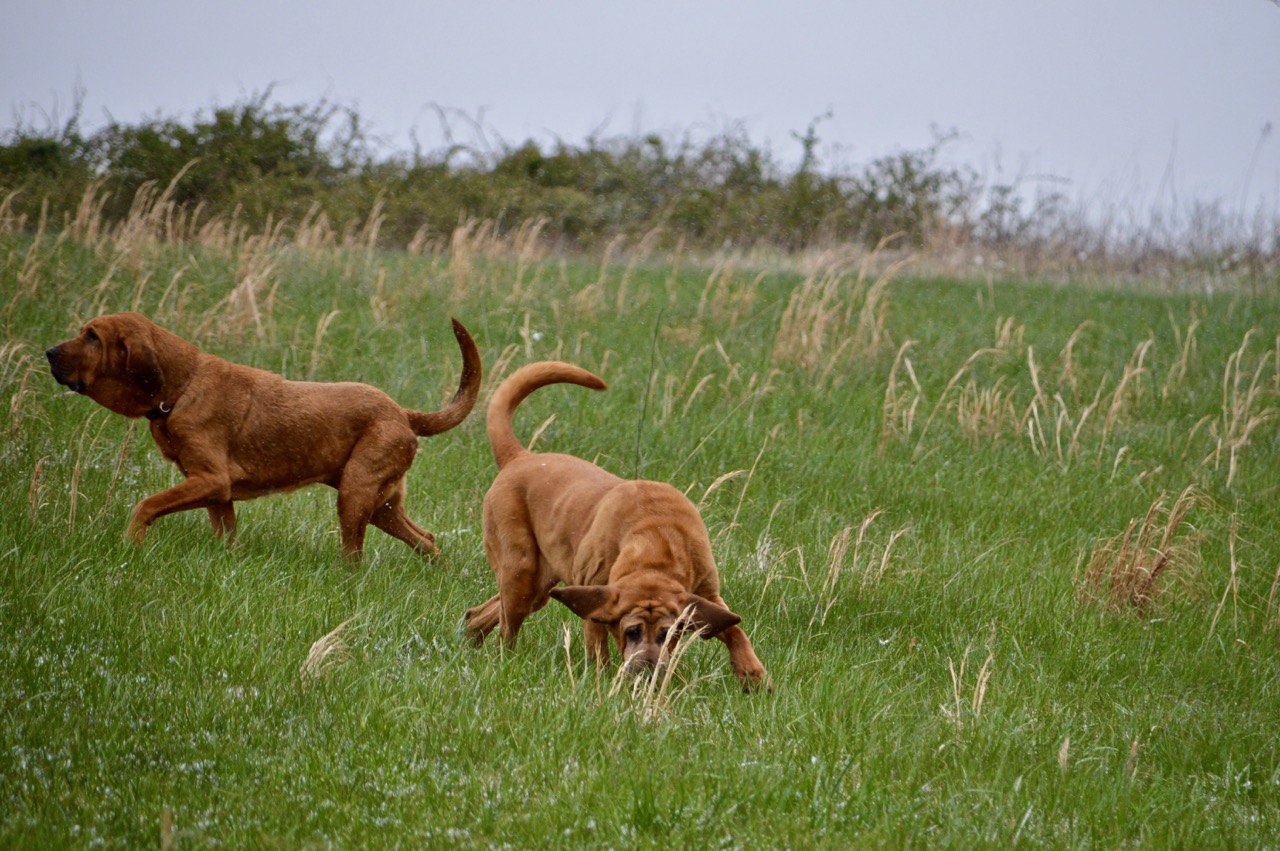 When their ears aren't lying down and Stella is moving faster than a slow walk ... you know the scent is strong. 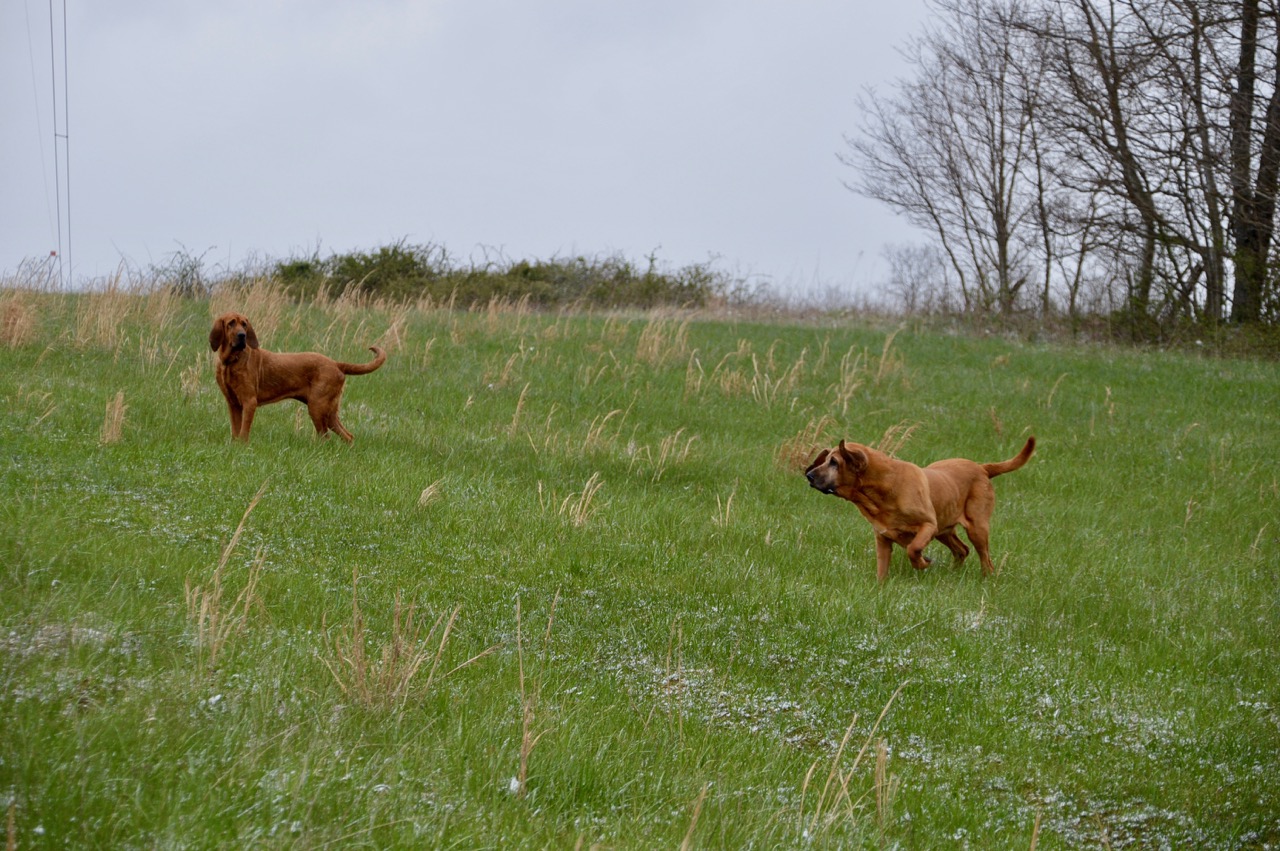 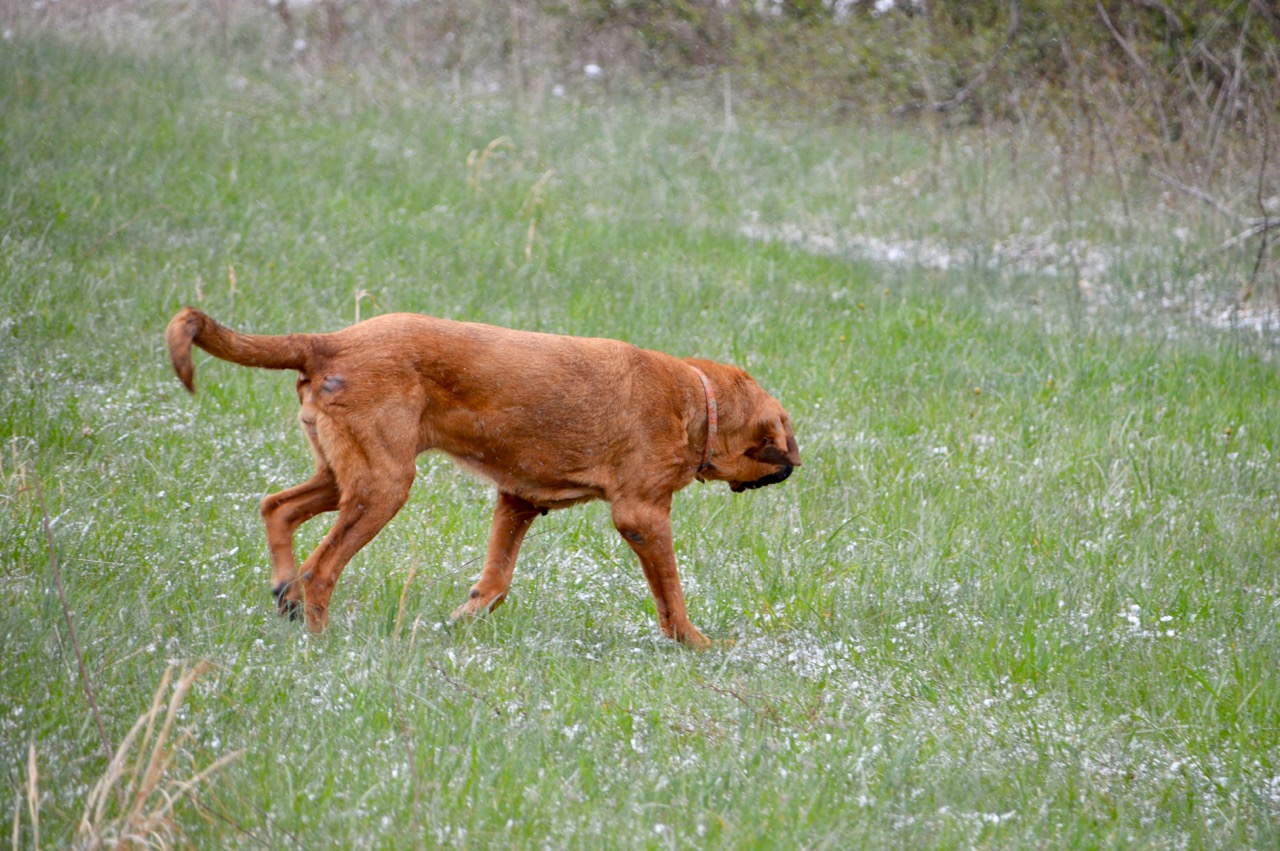 With new growth sprouting in the bushes that brings new sharp thorns. There were enough of them that Stella got hung up for a minute or so until she figured out how to set herself free. 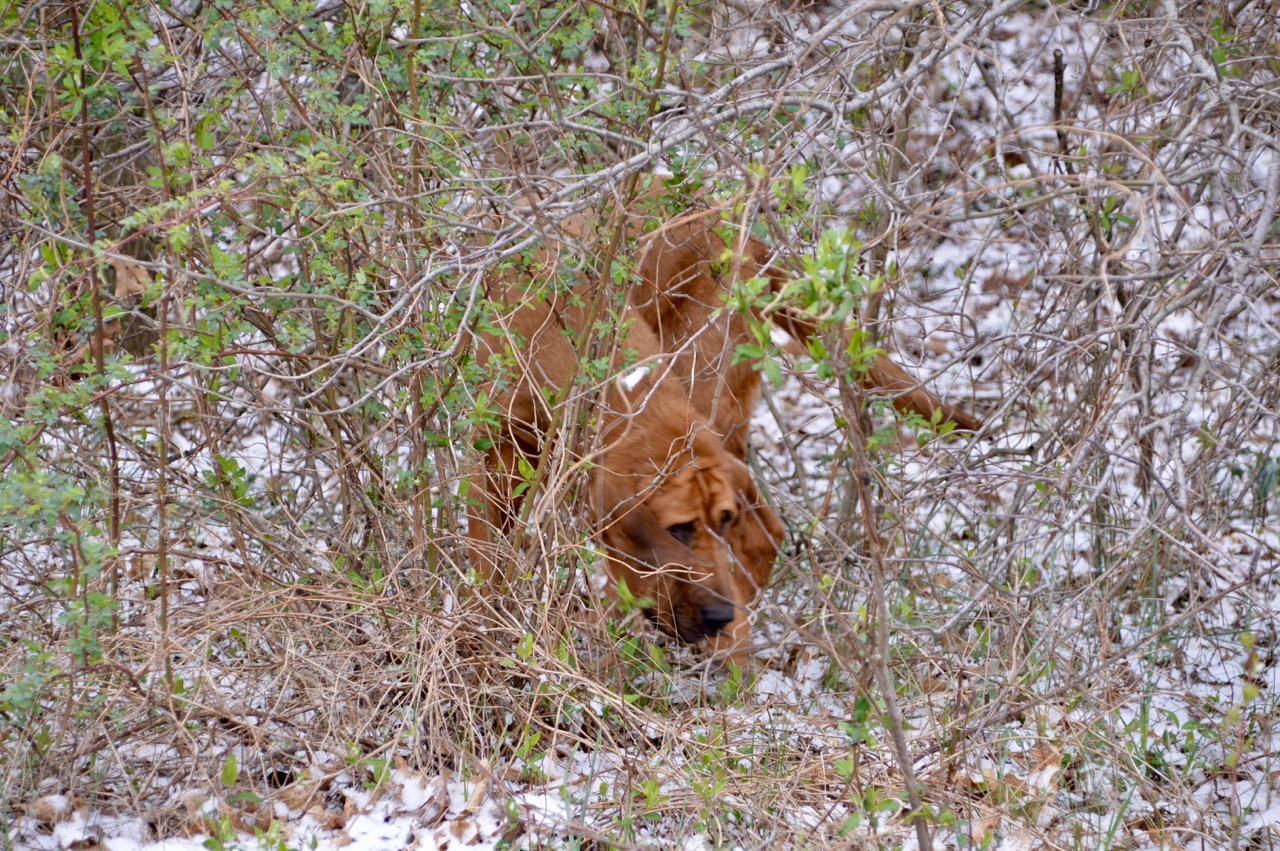 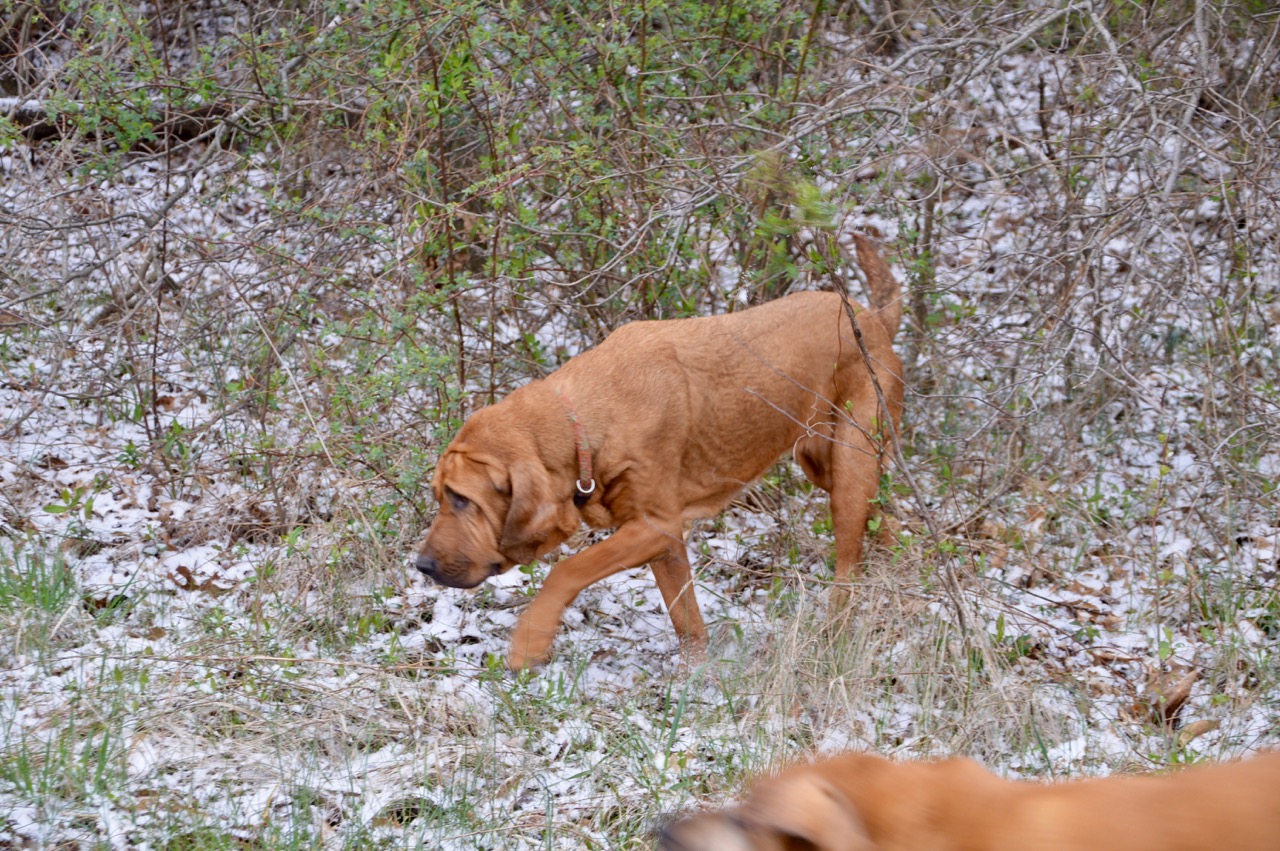 Then once again took off running away from me. 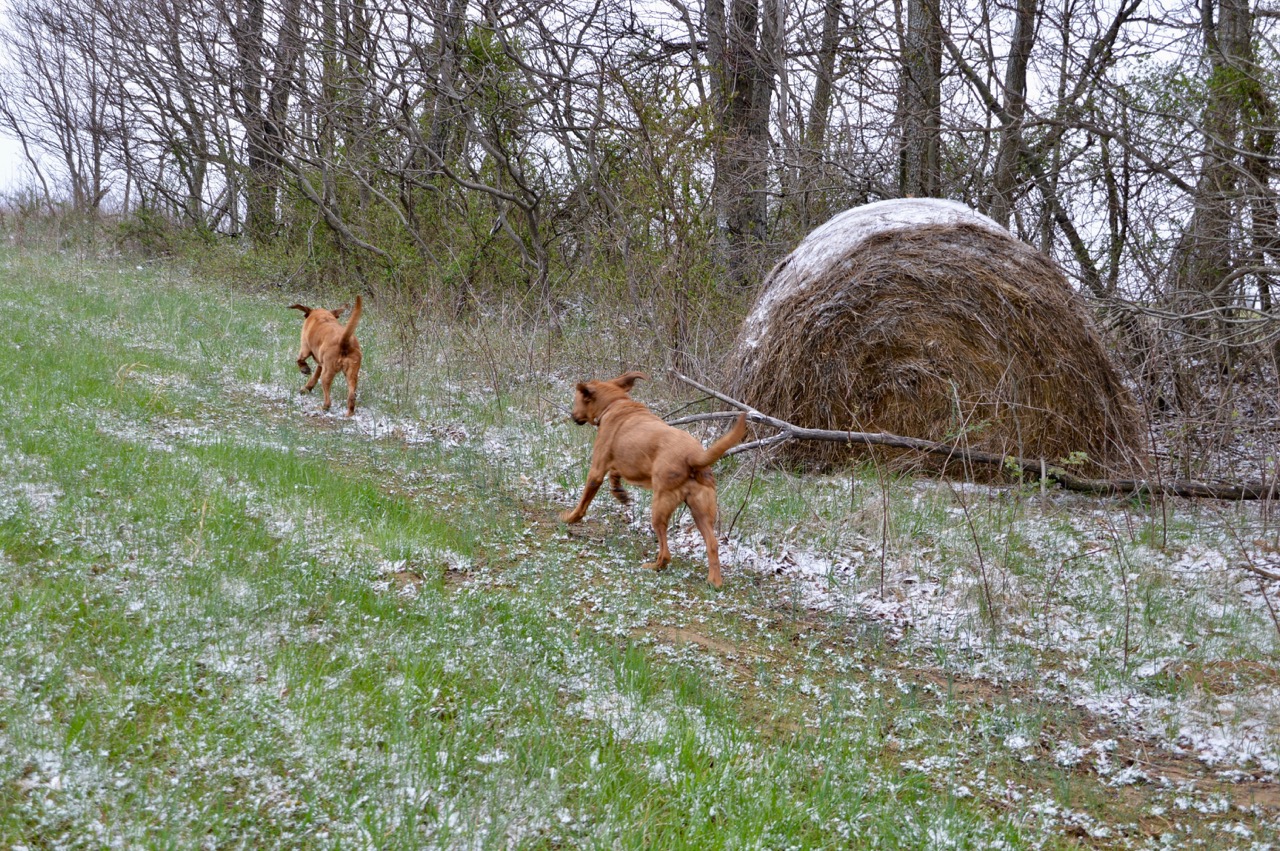 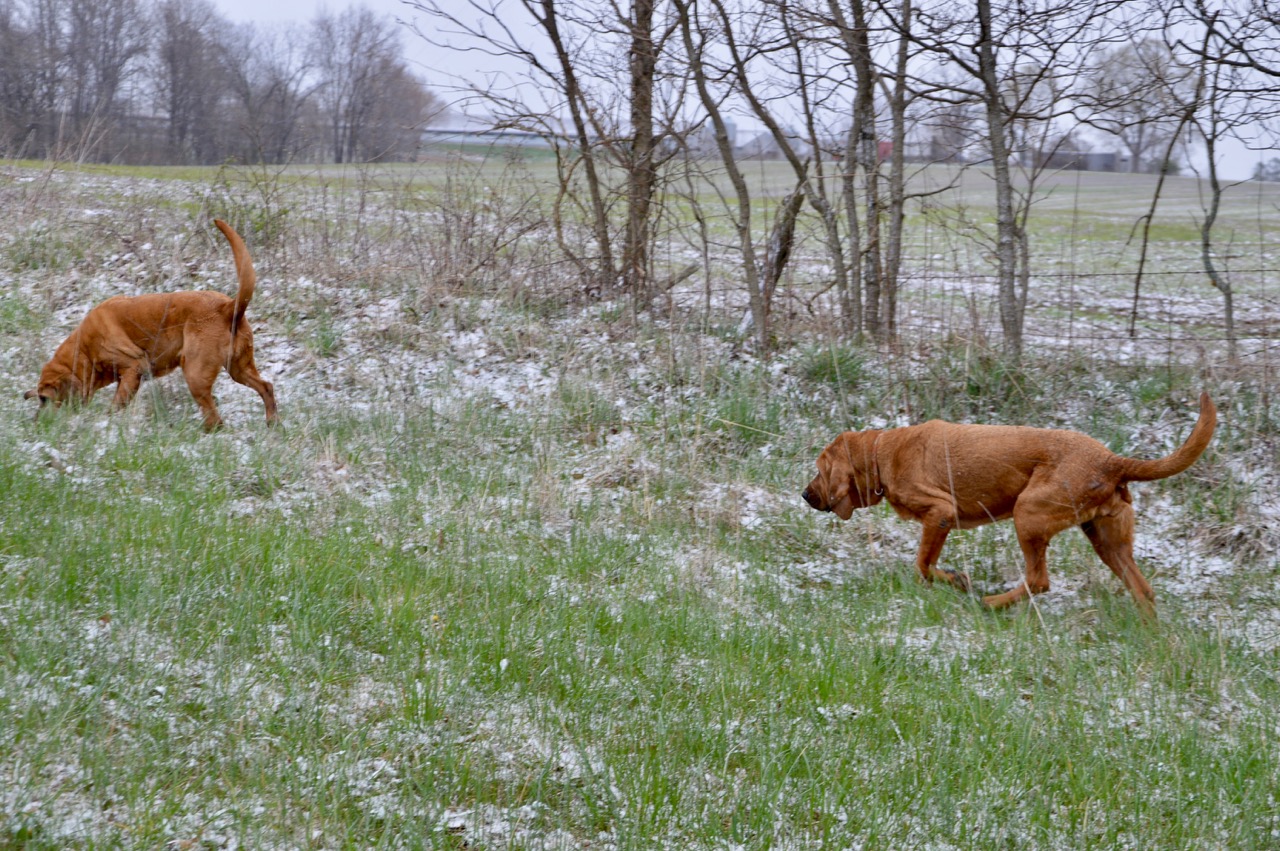 They followed that idea all the way back to the house. 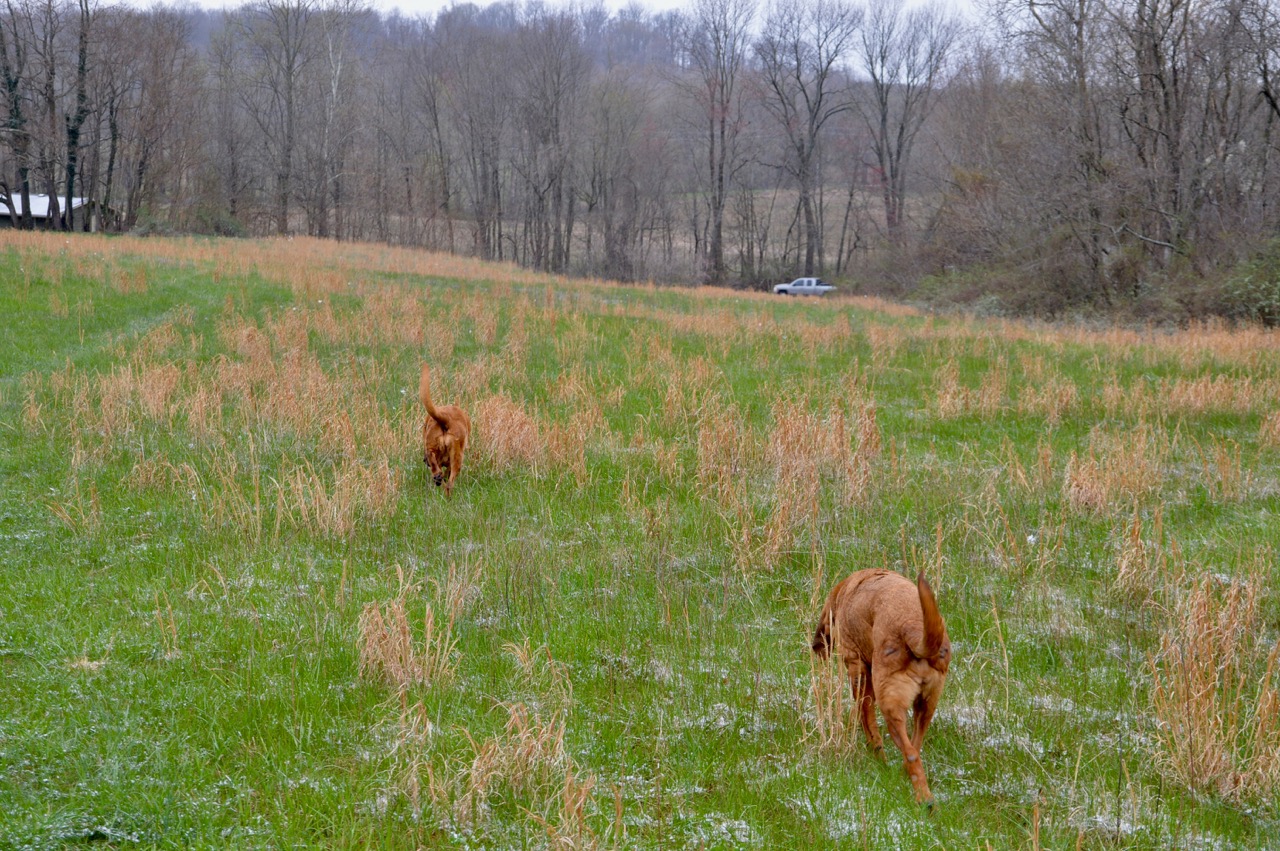 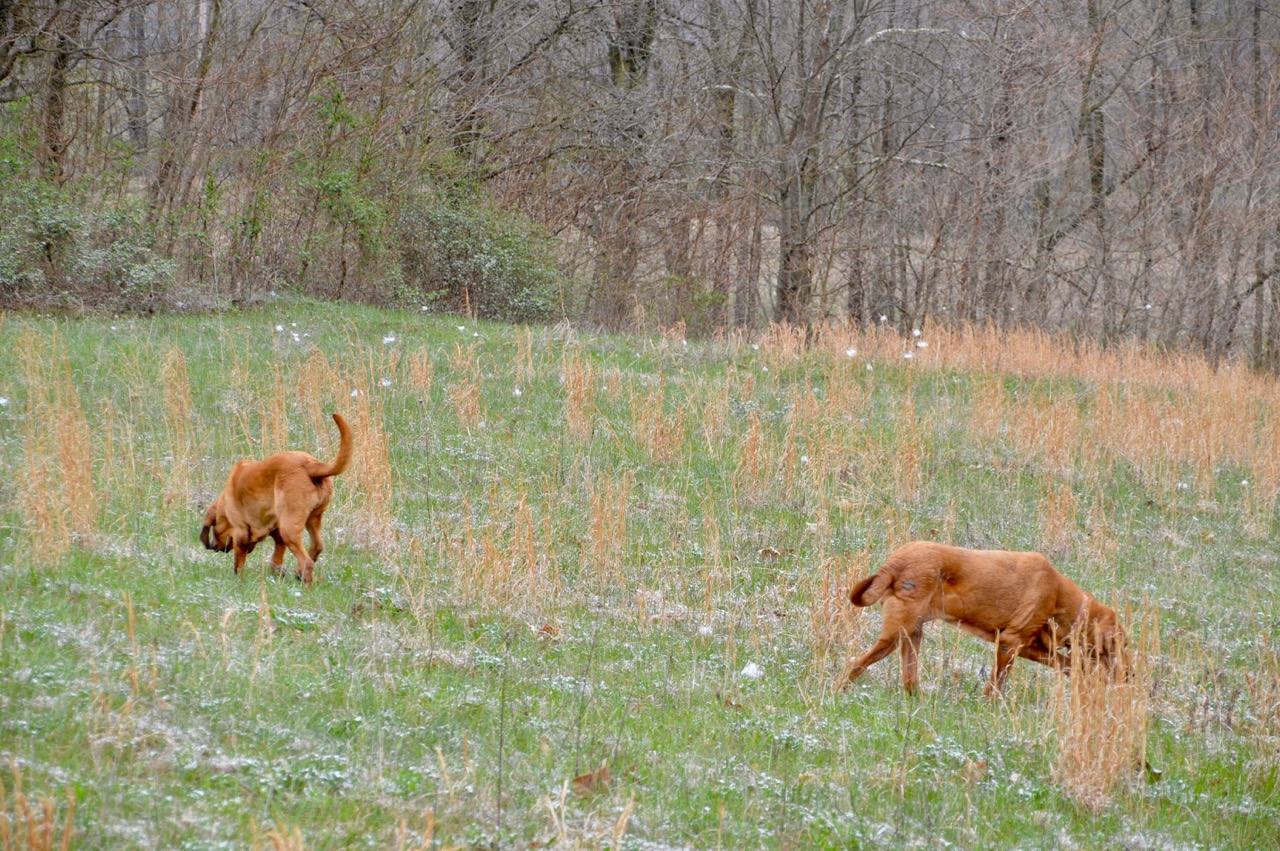 The more I thought about my washer situation last night with both the washer and dryer sitting outside their normal space, I decided even with that one water hose connected I could still lean the washer over toward it's side so I could look underneath ... I was surprised what I found and it made the water mystery even more confusing.

I knew the floor under the washer did not seem wet enough that would match the amount of water I found on my kitchen floor. But I knew the water had to come from there because of how saturated that dry towel got when I set it in front of the washer while doing my two small loads on Saturday.

I expected the floor to be really wet and possibly some standing water but there wasn't either of that. My next surprise is what I found inside the washer by looking from the bottom of it. I didn't see any signs of water, leaking hoses, or water trapped in the small 1/4" wide trap around the edge. All I found was dust and cobwebs. That's a good thing ... yet confusing.

With my bright LED camping flashlight I was able to see quite clearly from bottom to the top on all four sides. I didn't see a water stain anywhere. So I decided to put it and the dryer back in their normal spots and do more thinking.

By last night I had already ruled out buying used. There are only two reasons someone is selling a used washer and dryer ... it's either a money pit with problems or they have upgraded and bought one newer and more expensive. I don't like taking a chance on stuff like that.

I also know due to my DNA that I could never handle a new washer sitting next to my 38 year old dryer that works. It would drive me insane having them different. That's just the way I am. So on my way to buy groceries right after this post, I am going to stop by the local laundromat and see what the cost is, does it use debit cards or quarters, and what kind of vibe I get about the place. After all if I was a full time traveler like I wanted to be a few years ago, I'd have to use laundromats to wash clothes.

In the meantime I have gone back to 'layered clothing' for today but it will be high 50's and then 60's after tomorrow. I am saying it again ... the last day of freezing weather.

Thanks for the comments in the previous post on ideas on replacing a broke washer ... but is it really??? Testing tonight or tomorrow to see what happens.