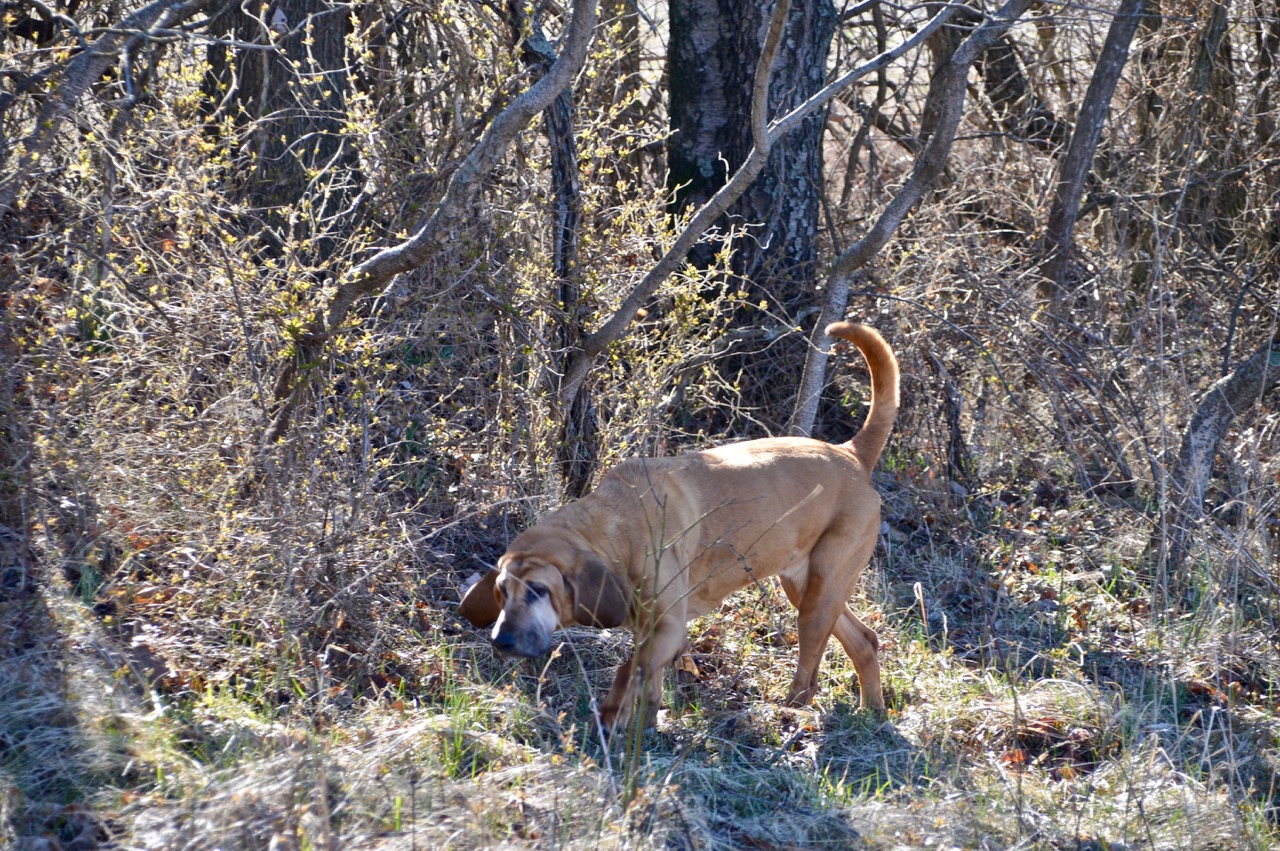 It has been a strange time since my last post. One thing that always changes besides the weather is life, sometimes with devastating news. As you will see in the photos taken over the span of time since our last post on March 15, the weather here in 'the tropics' of Southern Indiana has been wild and crazy. That continued this morning, but I have not gone outside yet to document the the light snow we had late last night on the 9th of April.

Over the 6 1/2 years I have blogged here the blog has changed from very personal thoughts during my RV research. Then it slowly migrated toward the hounds once I decided in June 2015 that traveling with just one bloodhound and two basset hounds would be too much to handle. At the same time I pulled in a lot of my personal thoughts or what was going on in life and just wrote about the hounds. 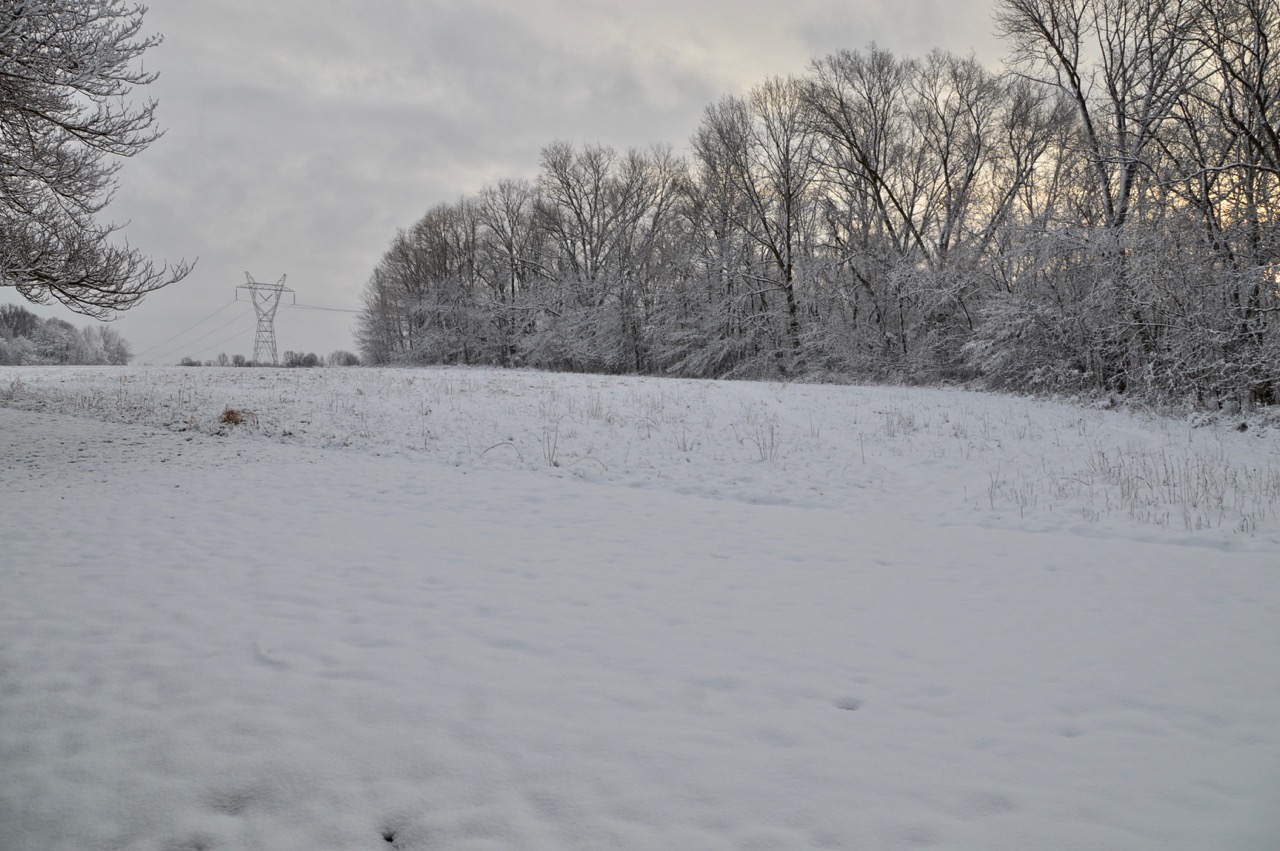 Some people can write about everything that is happening in their life, from traveling to depression, health issues, car issues etc. I cannot be that open on a public blog. So as many of you know or could tell over the past year or so most of the blogging has been about the hounds and less about me or what I am doing. It's just the way it is. You will have to fill in the gaps. 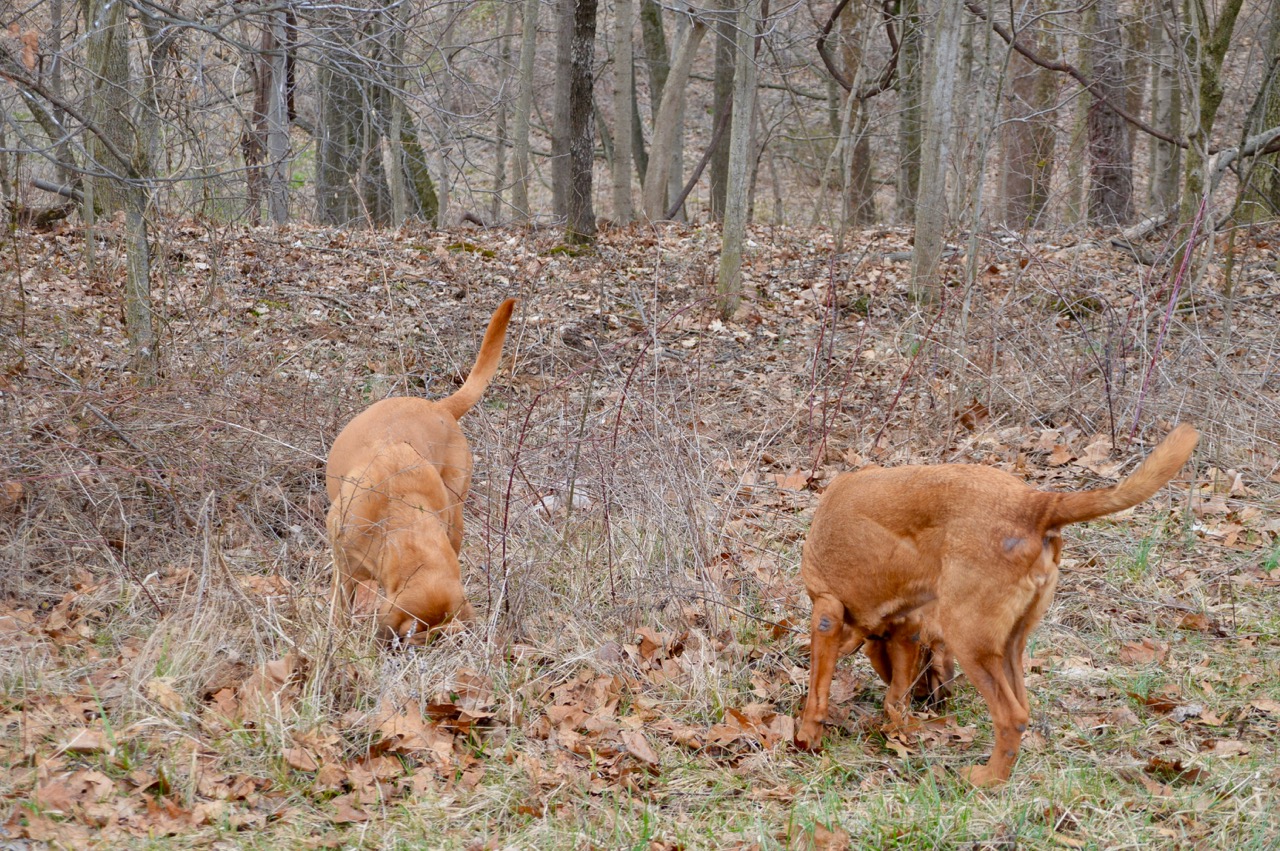 Even this morning I can't say if I will continue blogging or not. I am pretty sure I will no longer be blogging on a daily basis. I do know as the weather warms up my 'to do' list feels like it's a mile long and that doesn't give me a lot of computer time. I will just have to see what happens. 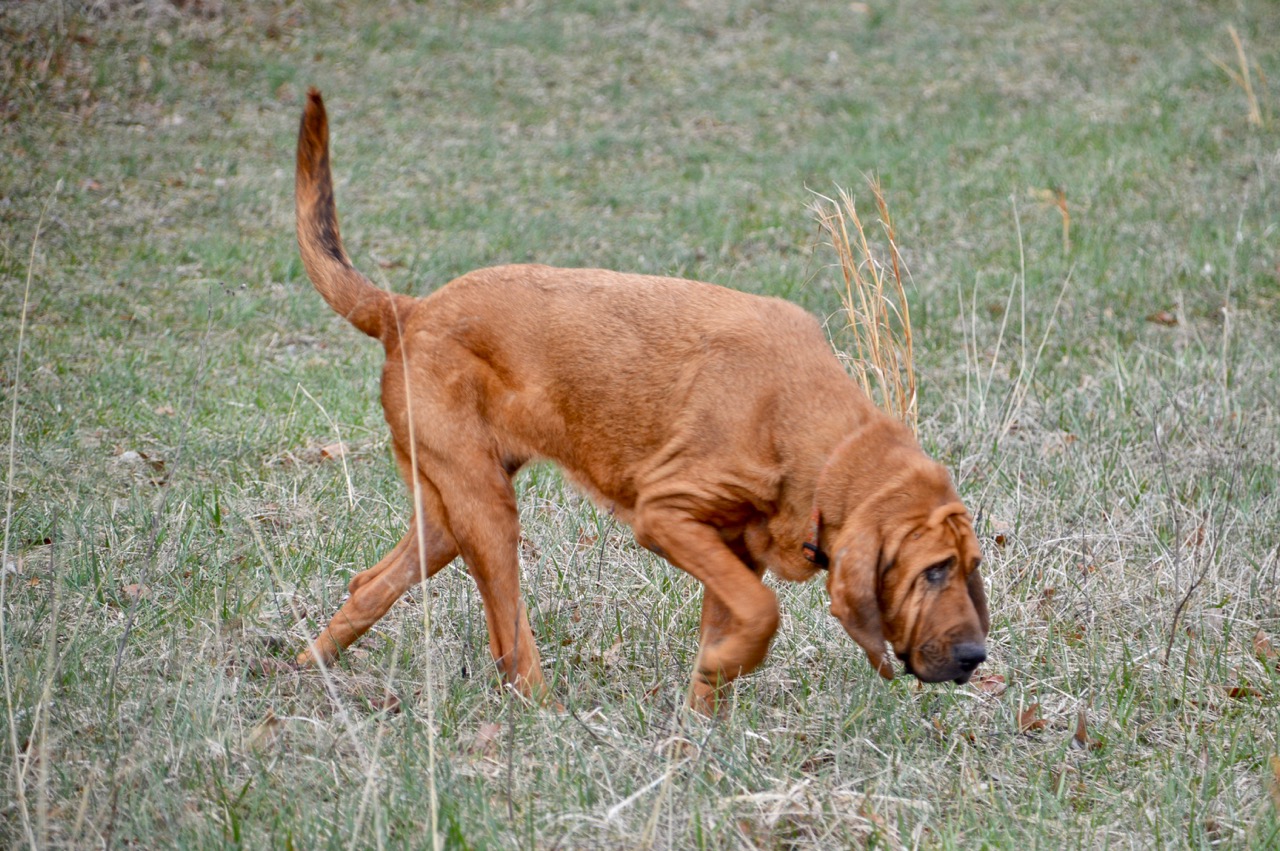 I will say that local tv weather experts were right in their forecasts. If they said it was going to rain non-stop for days and nights ... it did. A few times I had the feeling me might slide down the hill house and all or blow away from the strong winds. About the time the ground would be close to dry, it would snow. Dreams of spring weather were nowhere to be found and that stupid groundhog out in Pennsylvania was pretty accurate that winter would be extended this year. 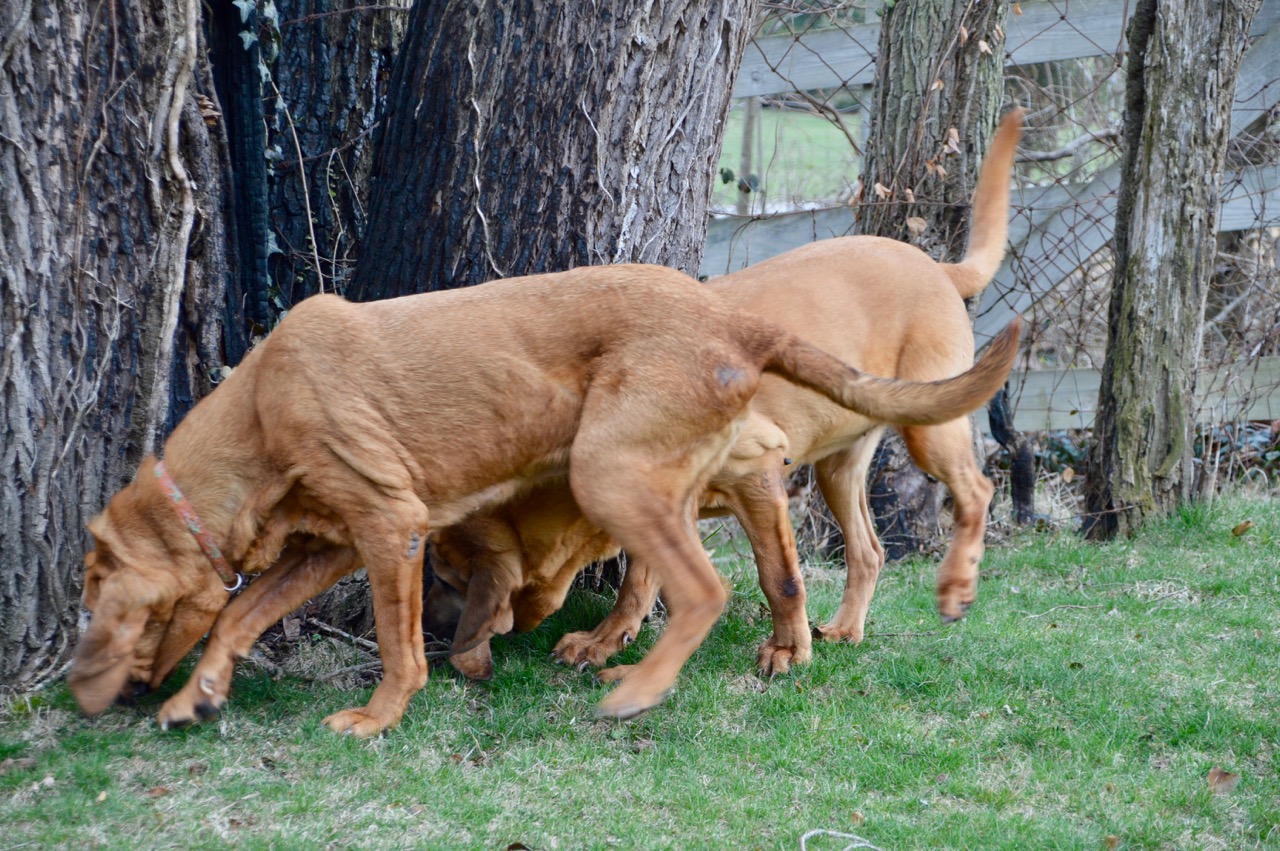 Occasionally we do have some nice sunsets here. Yet, those sunsets that some of you post on your blogs out west are hard to beat. That wide open western sky is fantastic. 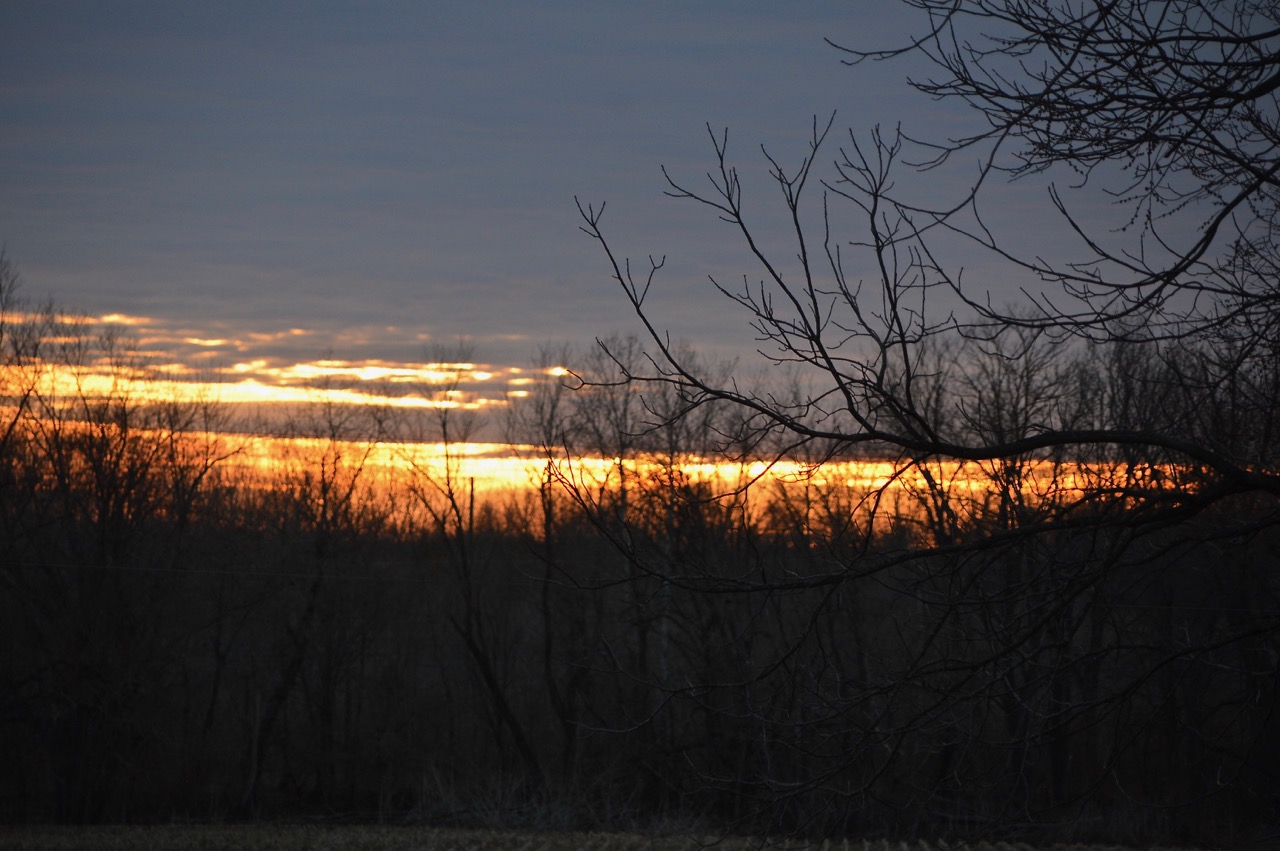 Not only were Sadie and Stella confused about the weather and why it was too wet or raining to take our daily walks ... this robin was also confused. The birds showed up normal time in the end of March, not knowing there was more snow on the way a week later. 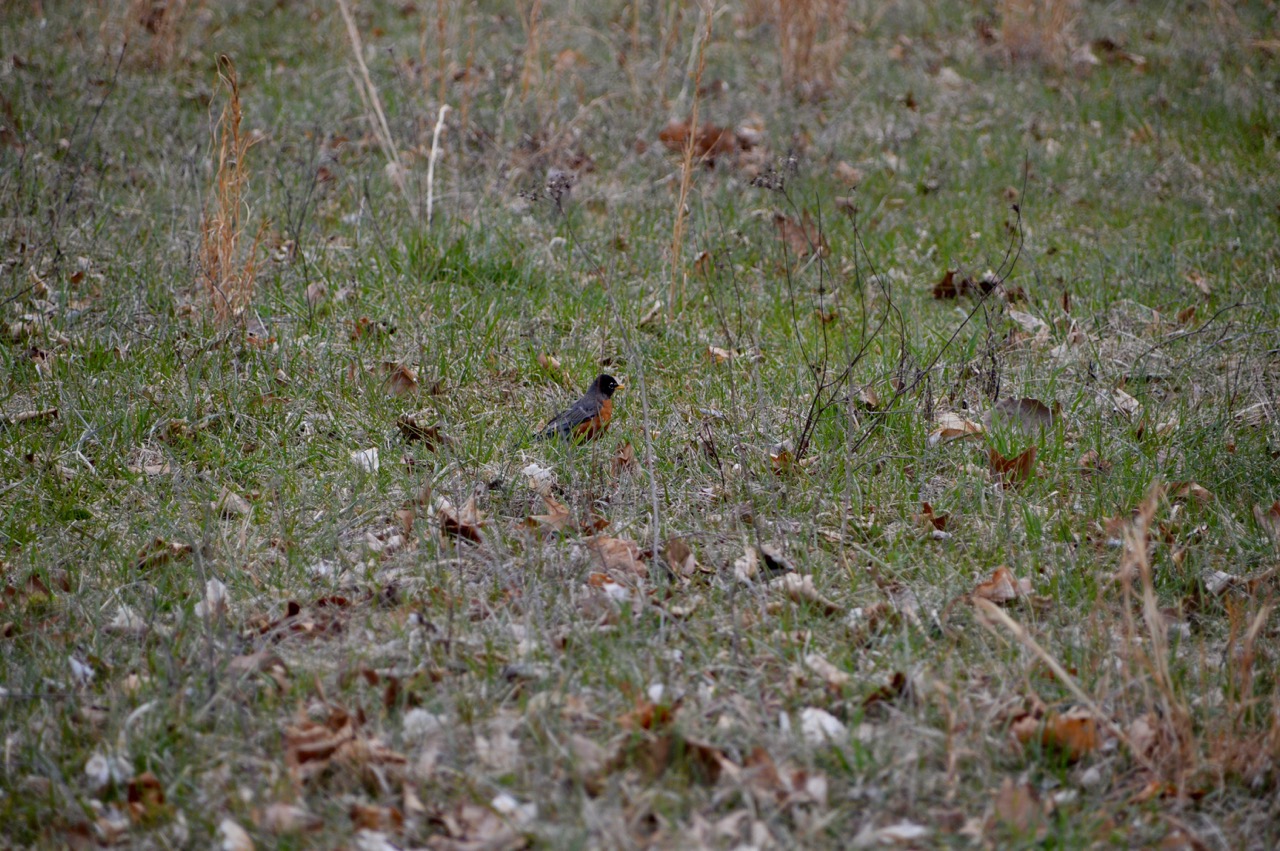 Stella has been pretty good the past month as far as wondering off during our walks, then ignoring me. She has continued to stay in the general area while Sadie and I complete the walk and she actually walks slowly in our direction when I call her name as we return home.

A year ago she was skin and bones, looking sick ... this year she has gained all of her weight back, her coat is soft and thick. Maybe it's that 'natural protein' she enjoys eating. 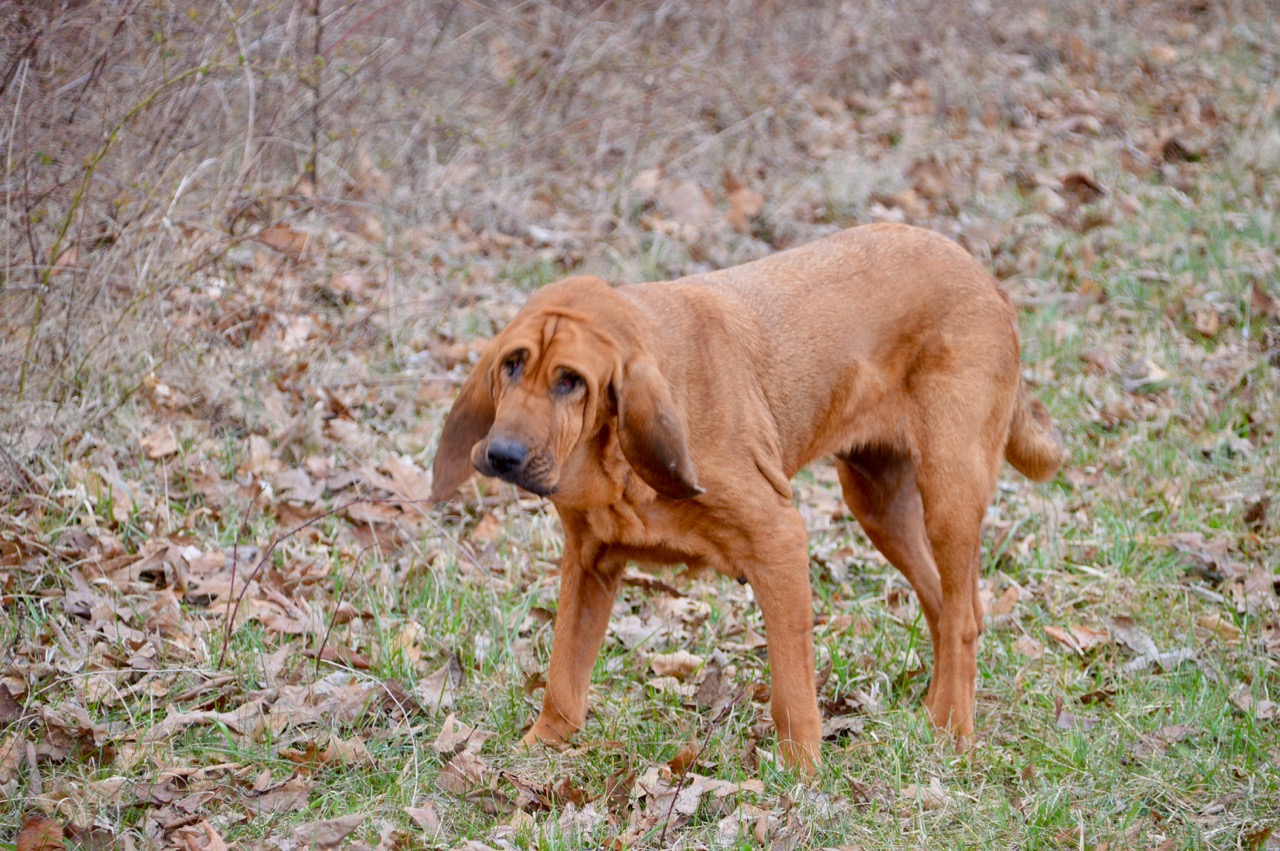 Sadie runs whenever she gets the chance in the field. It doesn't matter how wet or saturated the ground is with the large amounts of rain we have had. 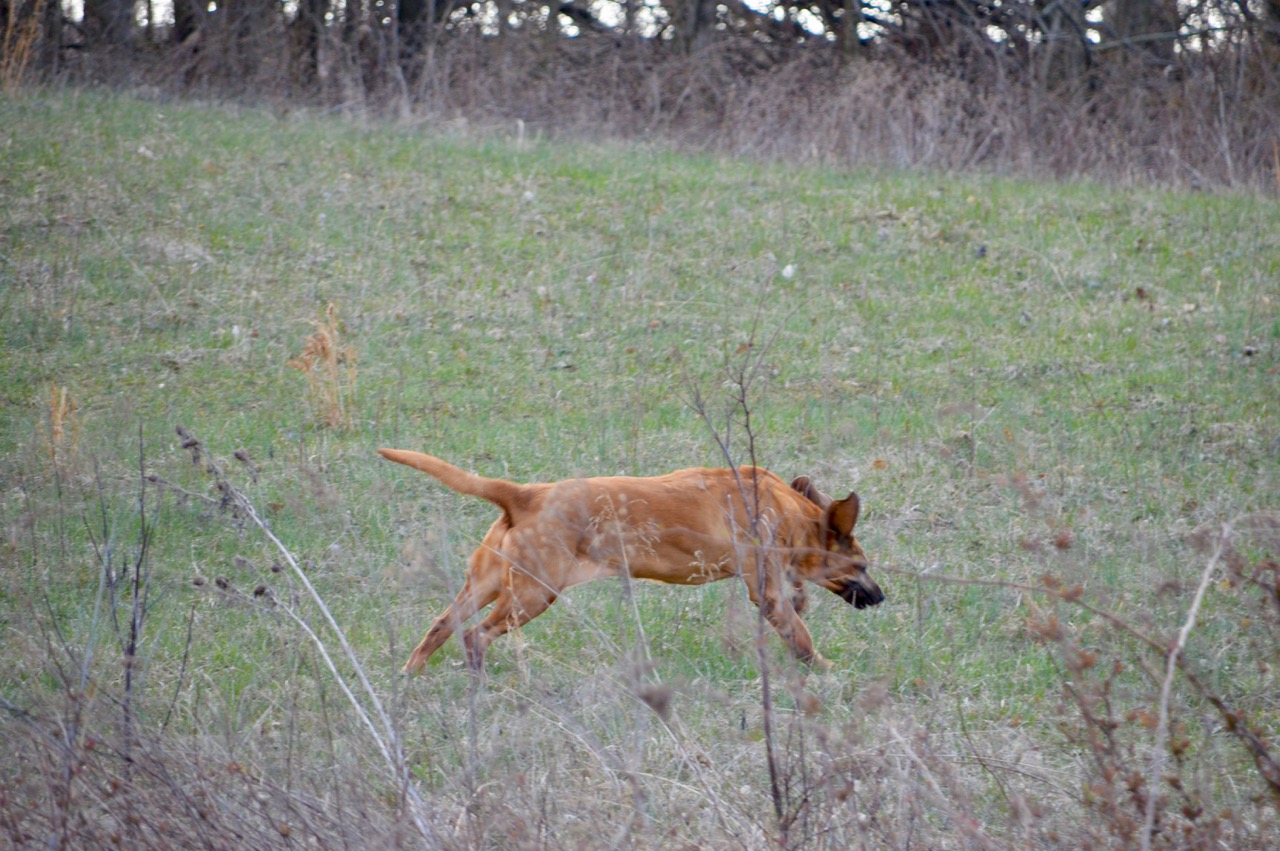 It happens every spring but rarely does it happen in March. From back in the field looking this direction you would think we have moved to lakefront property. This was taken a week or two ago, there is even more water than that right now. 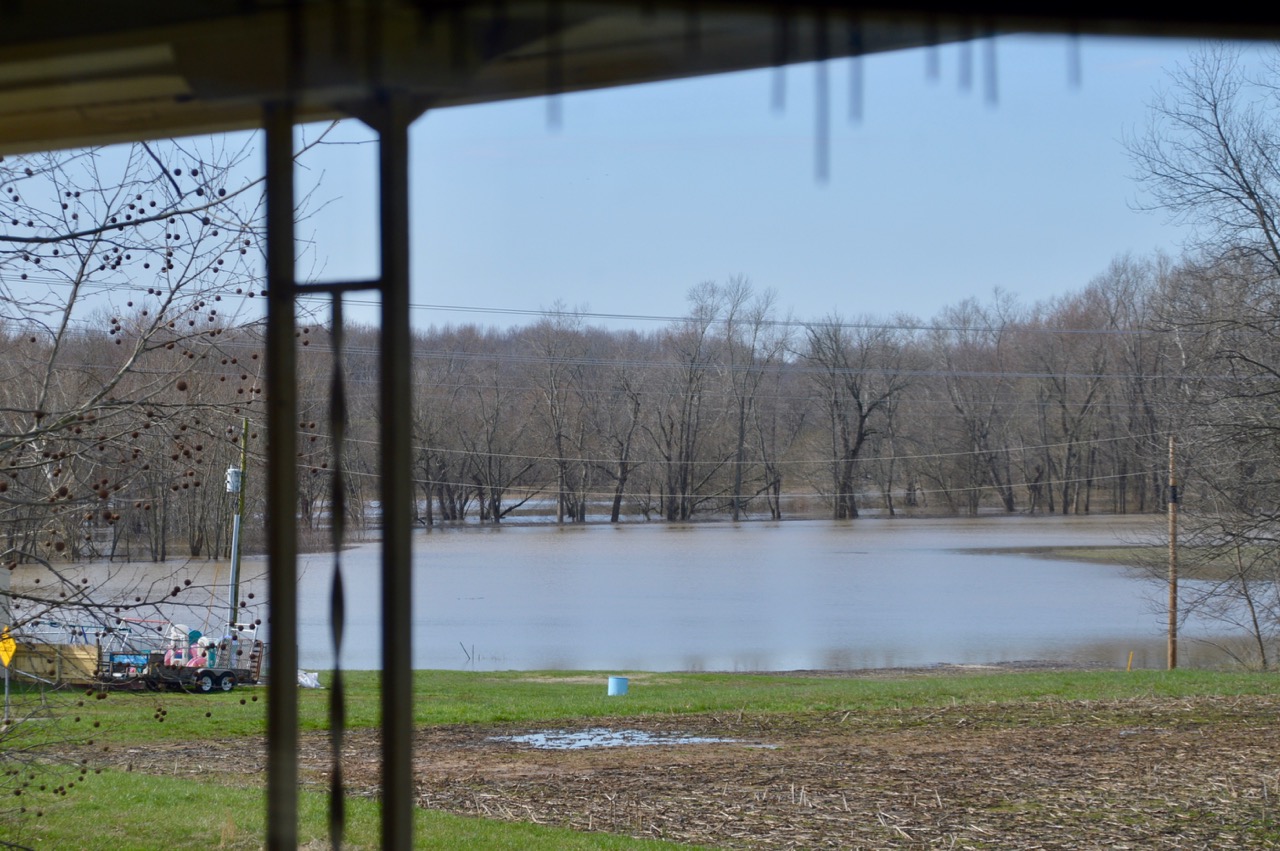 The only thing that kept us sane was the bright sunny days although the temperatures were in the low 30's and the field was frozen mud. Thoughts of the town I want to move to was 40° warmer and the cost of housing is bout $40 per square foot more than where I live now. A lot of thinking and a lot of conflict again on what to do. 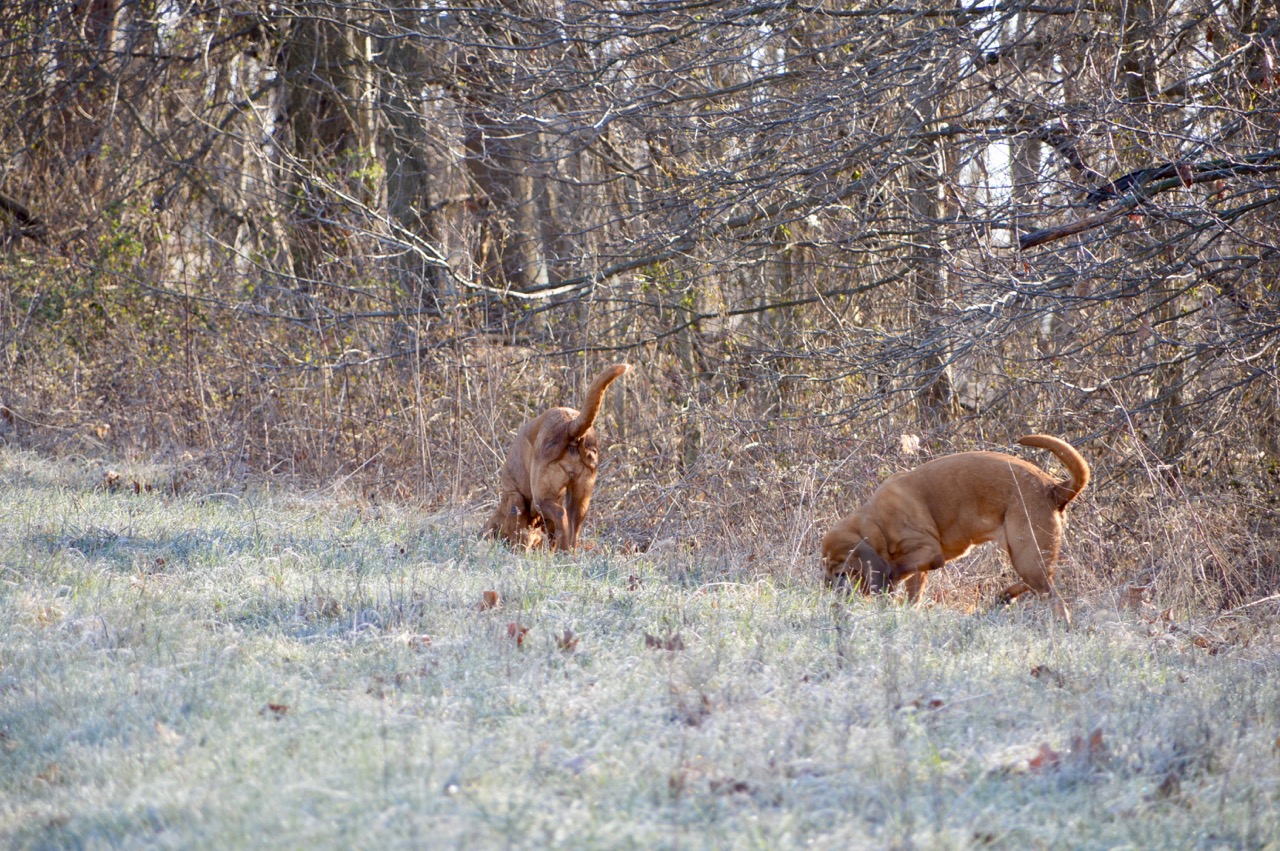 With less blogging I took less pictures lately. That led to some low quality photos even with the auto focus settings. We still took 1-2 hound walks per day as long as it wasn't raining or the water didn't come up over my boots as I took each step in the field. Many of those walks were with the retractable leash in hand just in case Stella decided to turn stubborn. 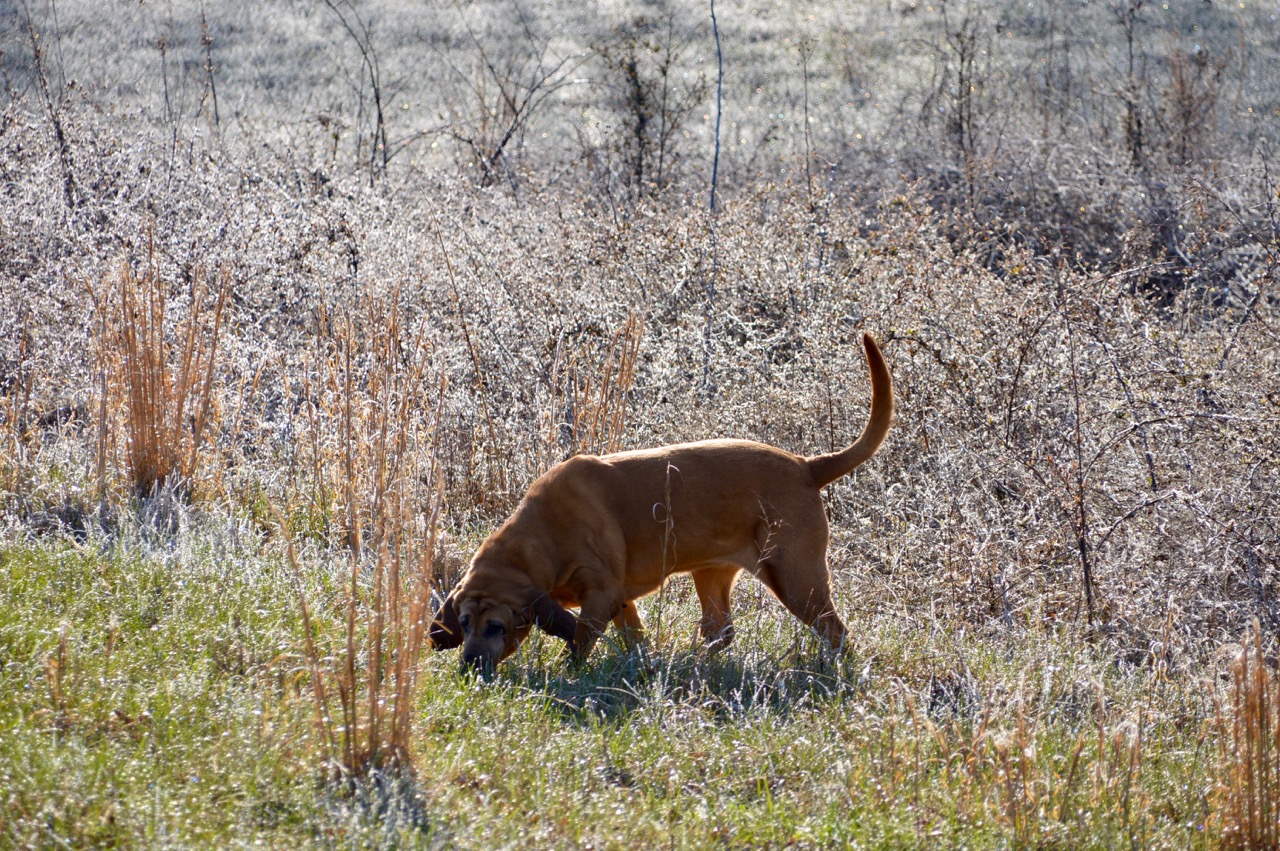 Stella decided one morning it was more fun to make the complete walk on her own without a leash, rather than hanging back and supplementing her diet with natural protein left by the deer. She even had a little bounce to her step so I knew she was feeling pretty good. 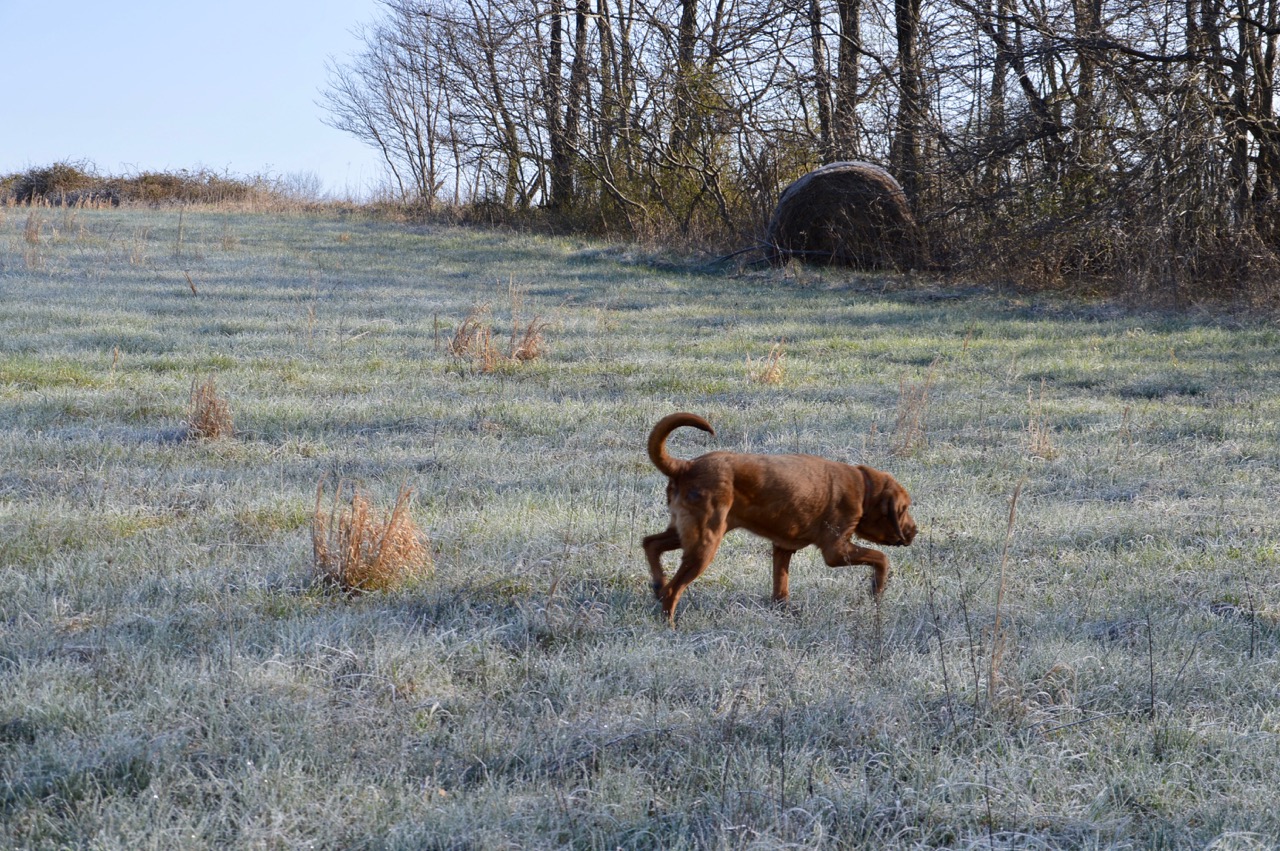 Many of the morning walks the past 3 weeks have had the sound of crunching frozen grass under our feet. It's just hard to wrap my brain around freezing temperatures in the month of April. I cannot say that I am thrilled about that. I am ready for warm, hot, sunny weather. 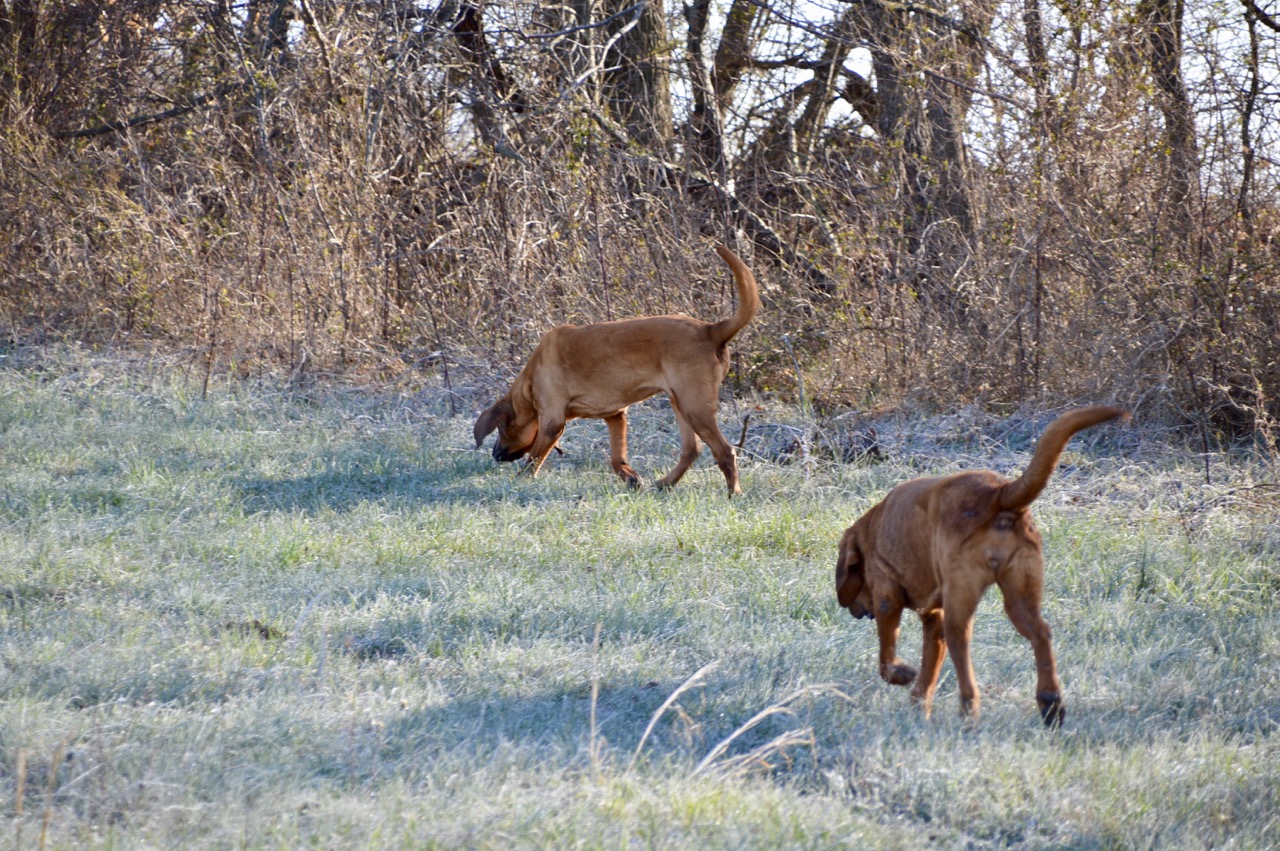 After the snow disappeared at the end of March, the robins tried one more time to set up their camp. I guess the 40°'s felt like 60° to them. 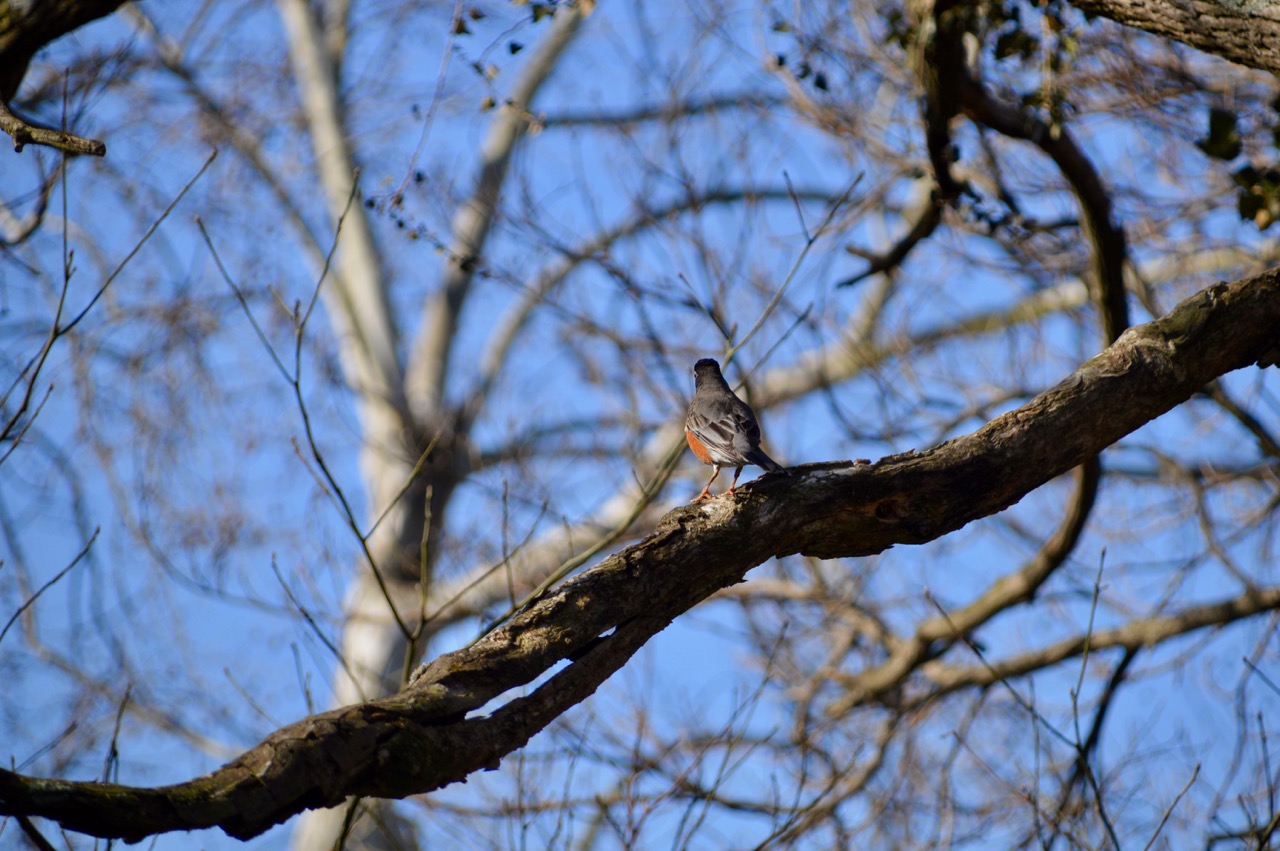 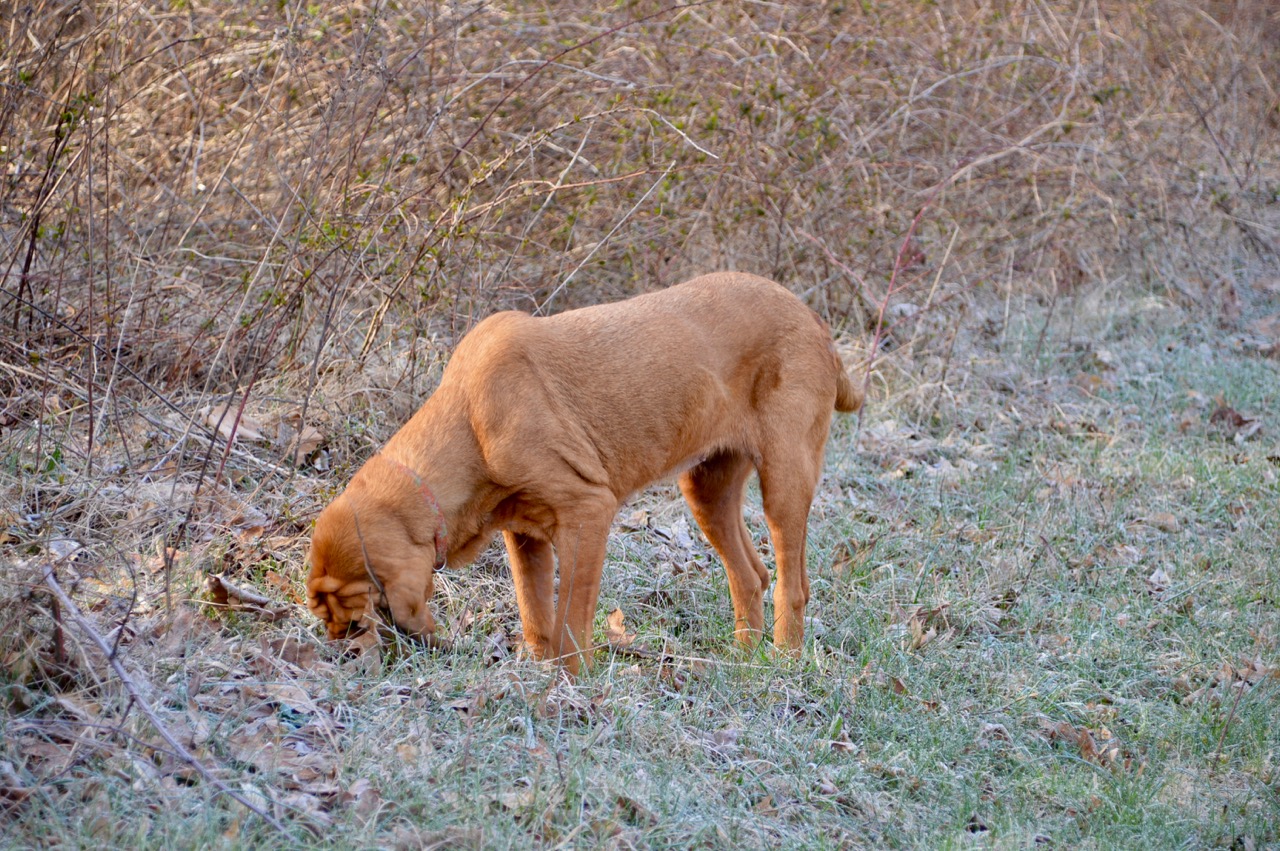 I have noticed a lot more deer traffic lately on our walks with fresh hoof prints and Sadie taking more and more trips into the wooded brush area. She spends a lot of time with her nose to the ground and running from spot to spot. 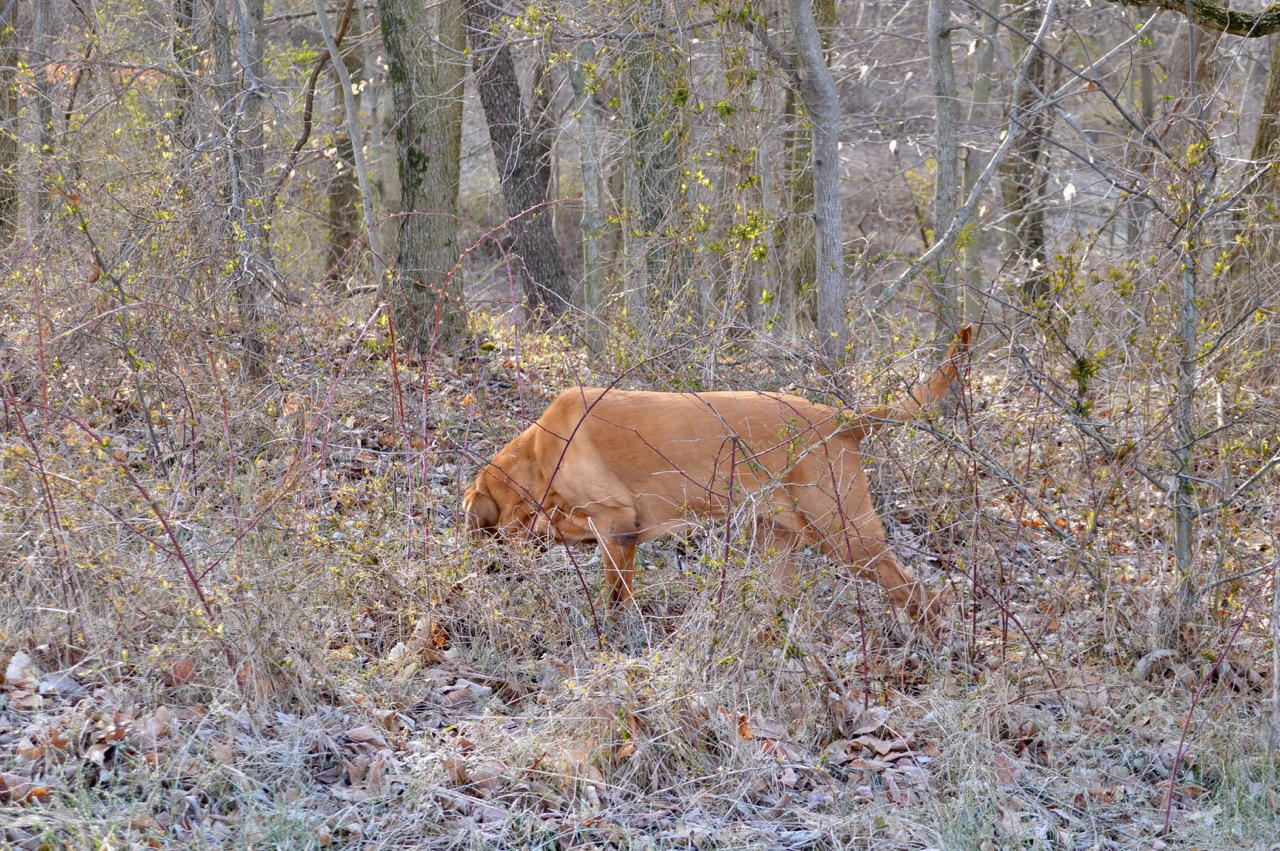 As she turns 10 years old in June I think I am seeing a little more gray hair around that black nose of hers. 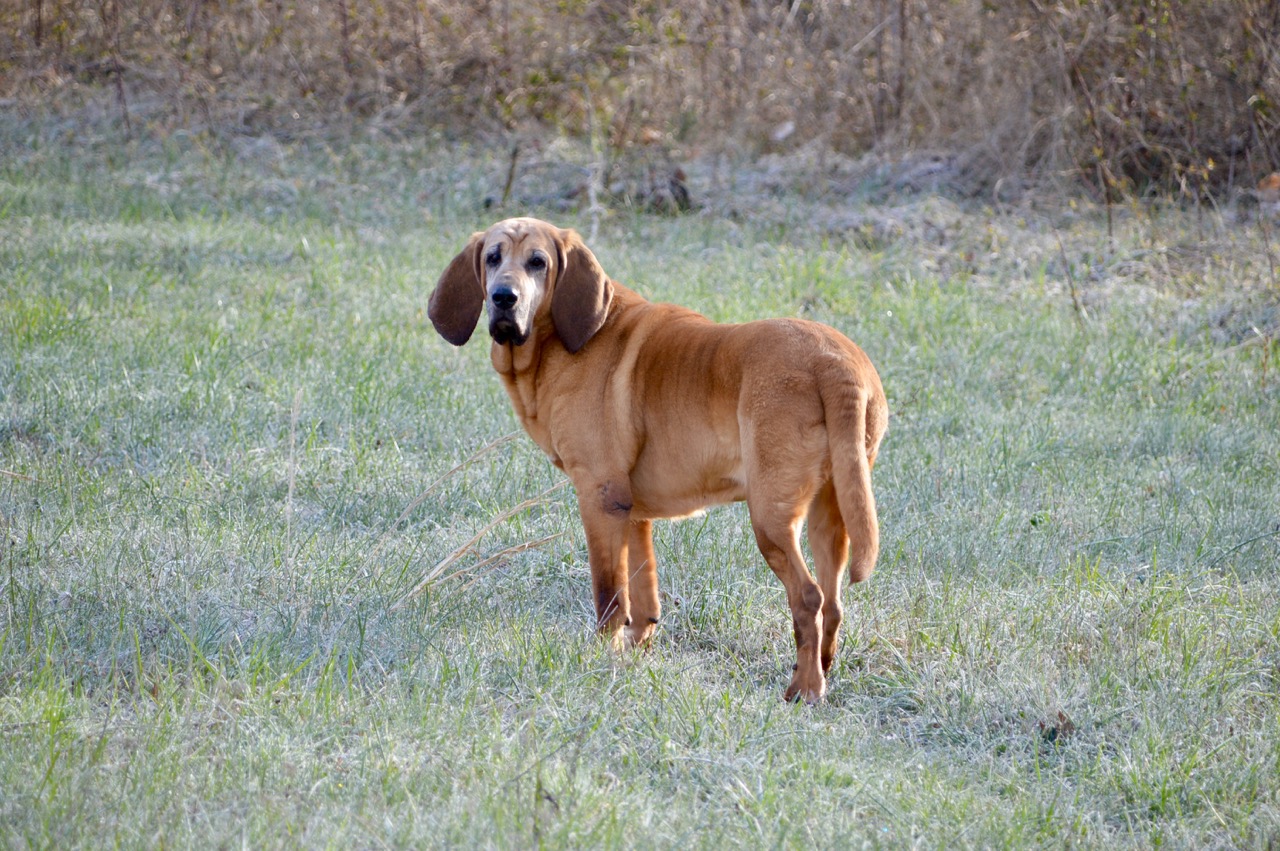 Stella is always in deep thought. 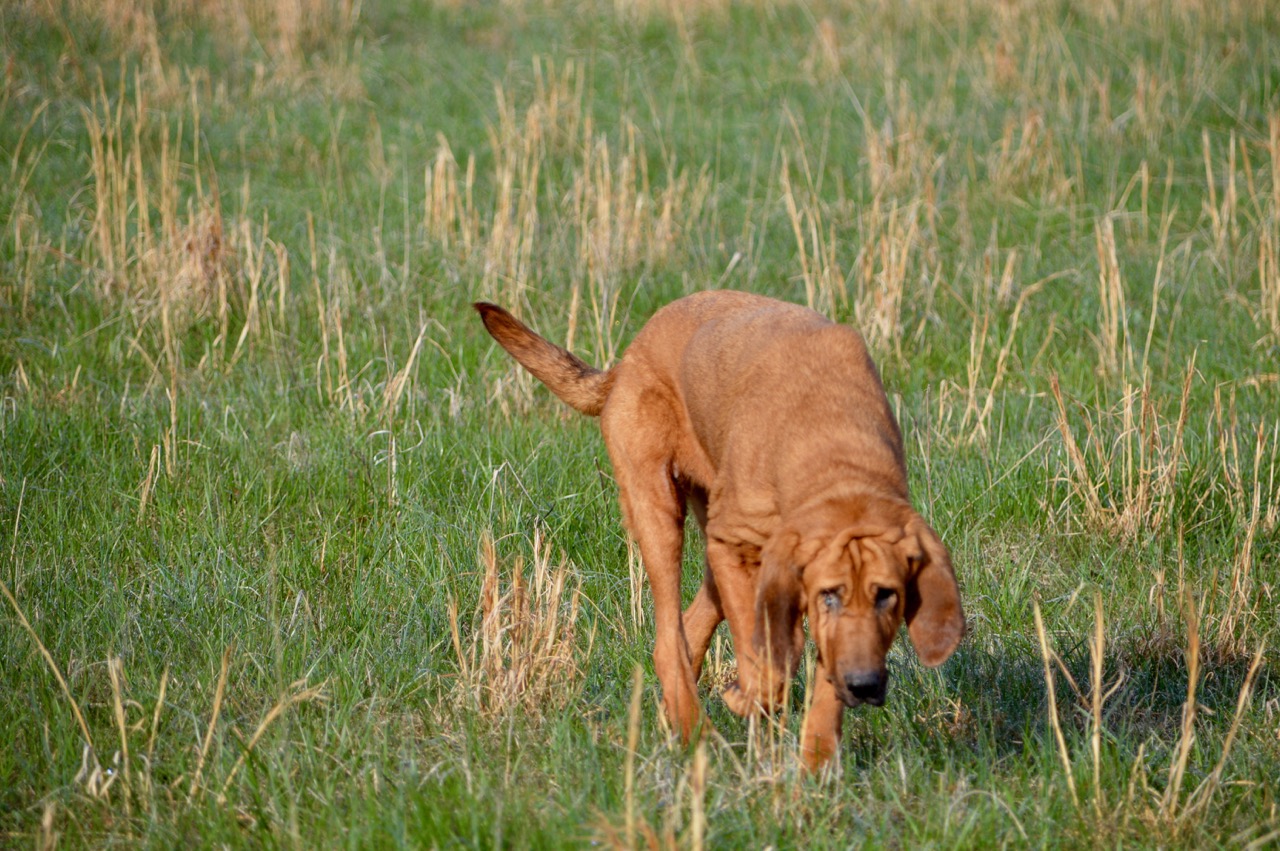 After almost two months of Dish Network I can say that I am pretty happy with the change in satellite tv service. Of course like anything else, there are some things I don't like as much as I move around their menu with my remote and other things I like better than Directv. I continue to get the mail from Directv every week telling me to come back with some pretty interesting offers. Here is Stella on March 22nd trying to figure out what happened to her green yard she was in the day before. Not a lot of snow but just weird ... I was mowing my yard a few times a week this time last year. 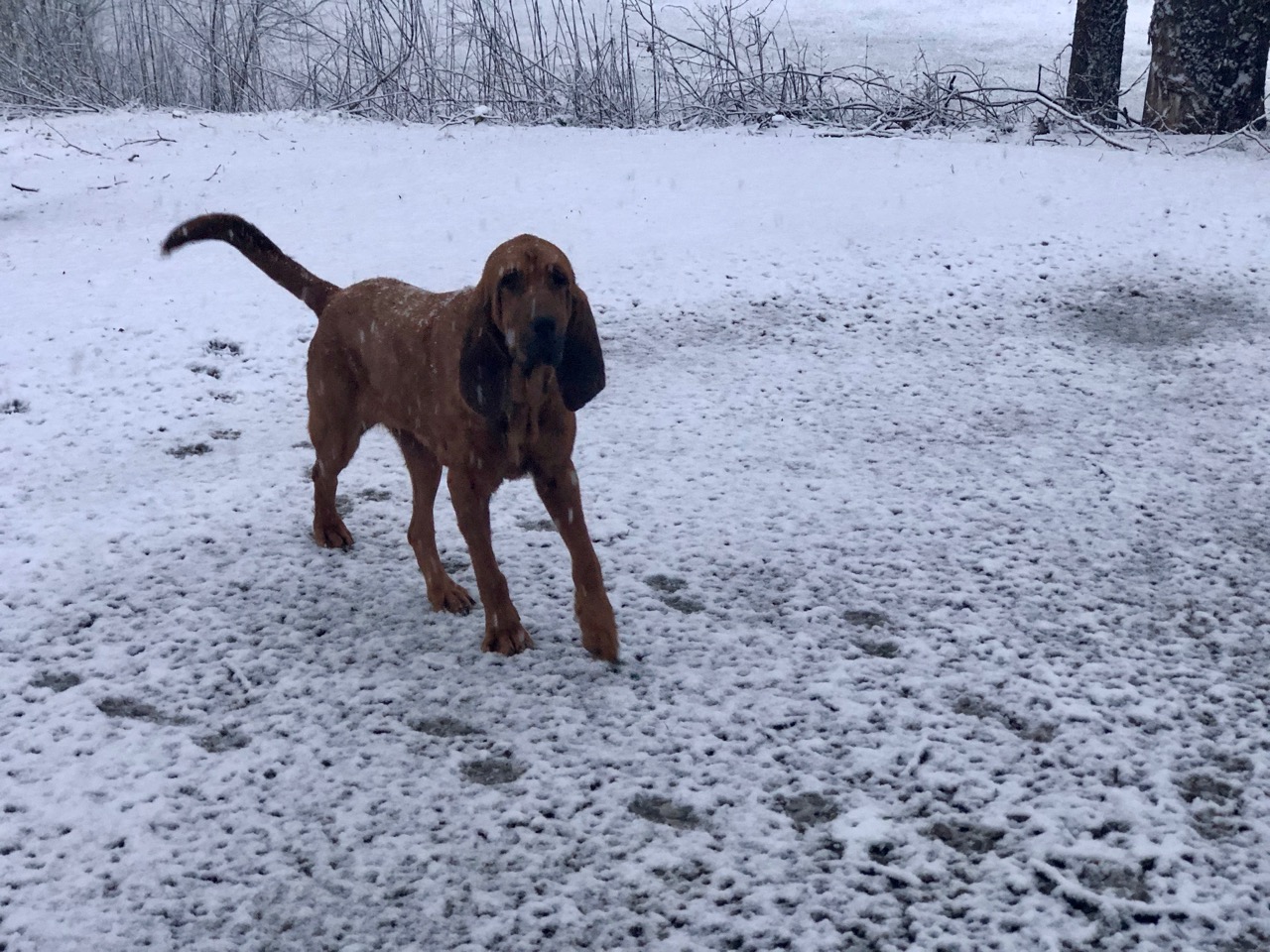 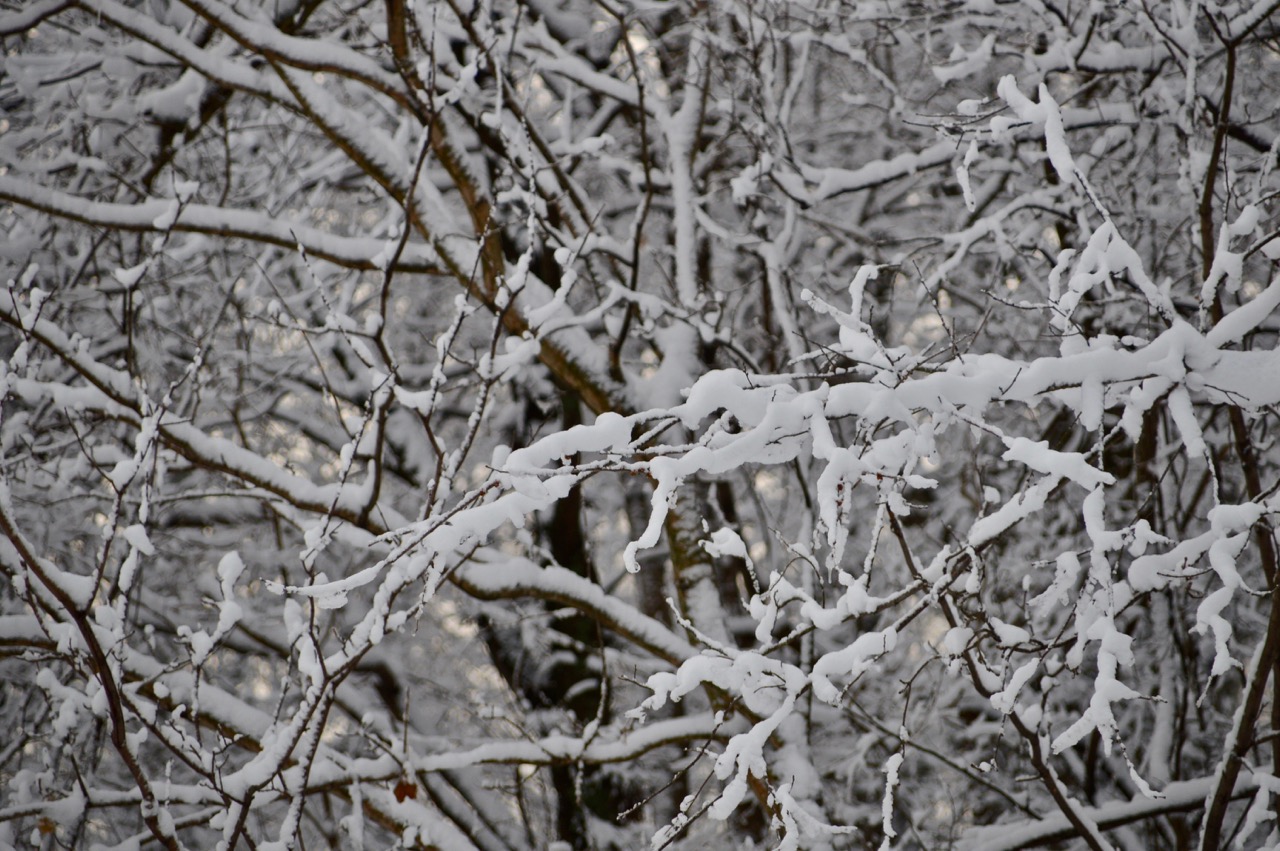 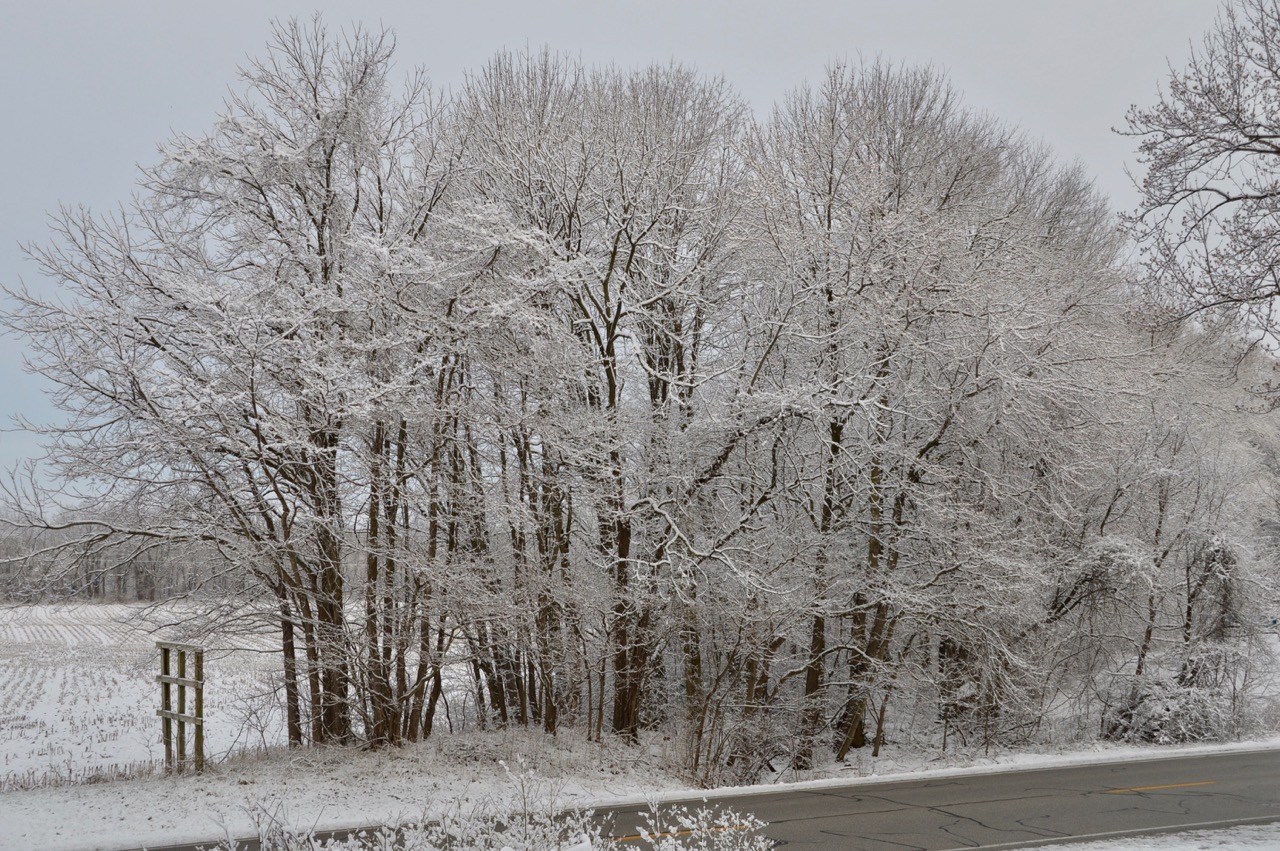 The only one not confused around here abut the weather or life in general is Heidi. She knows what is going on outside and she wants no part of it. She might do a lap around the house after her lunch but as far as checking out the rain, the snow or high winds ... not going to happen. 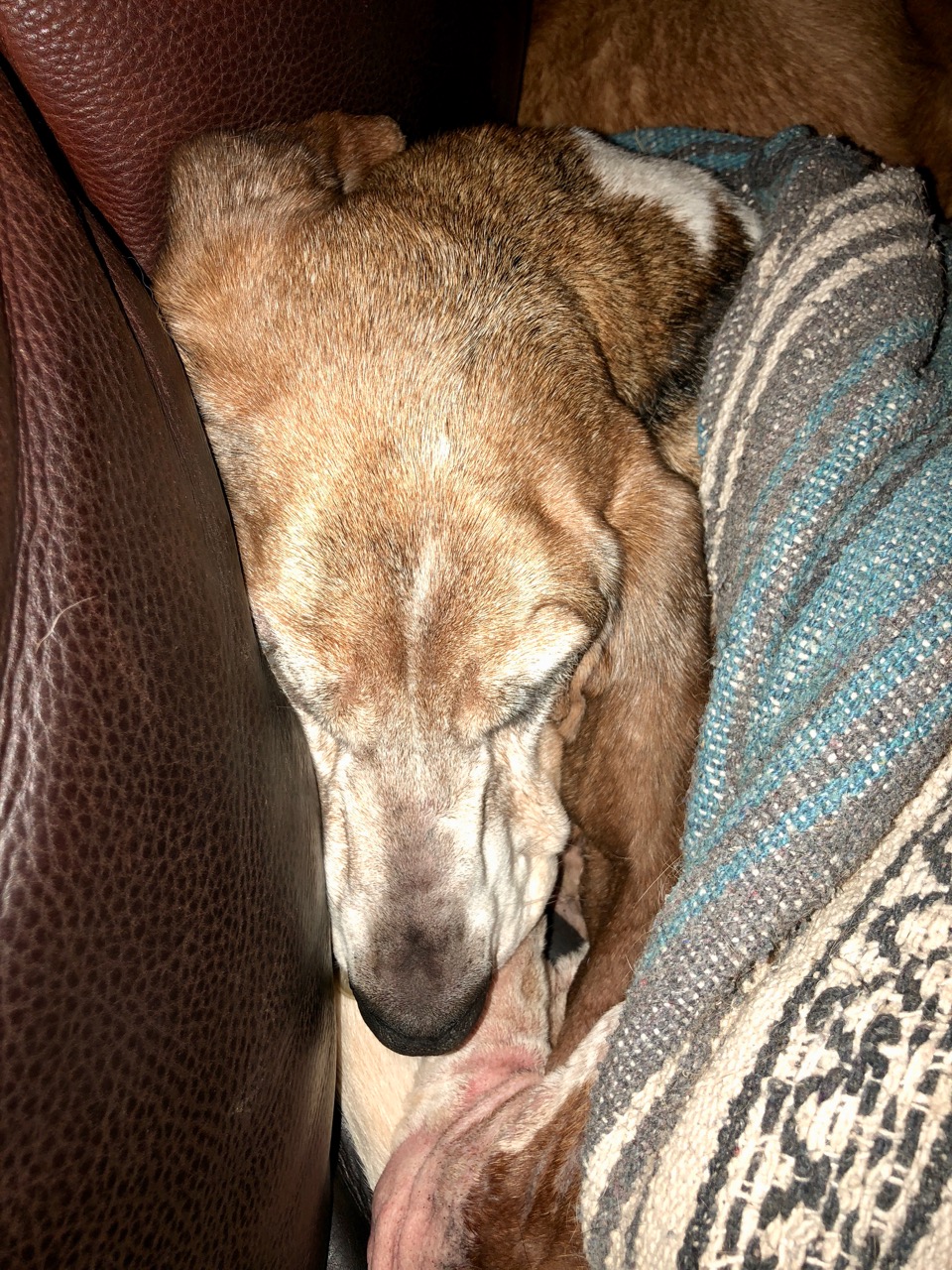 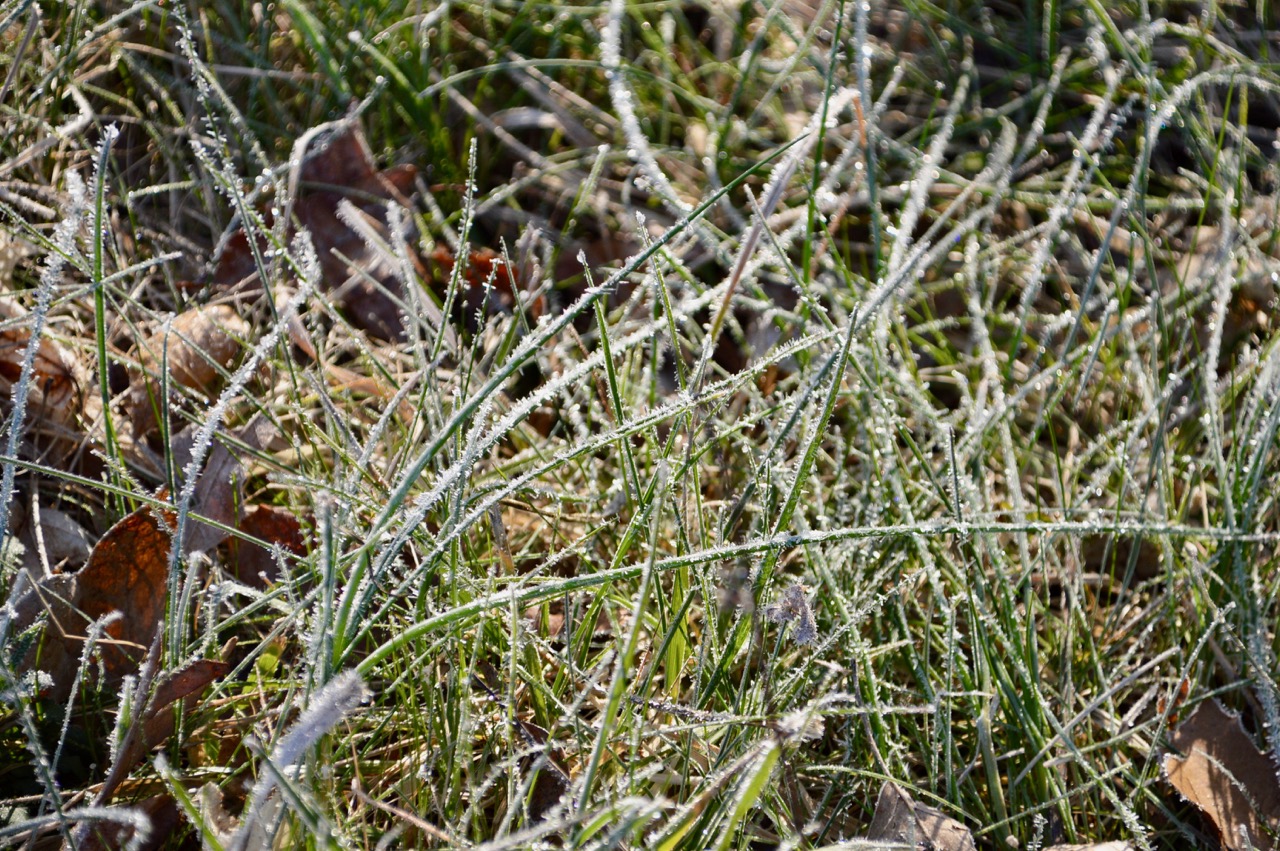 Consequently with all the bad weather the past 25 days ... the hounds do a lot of this. 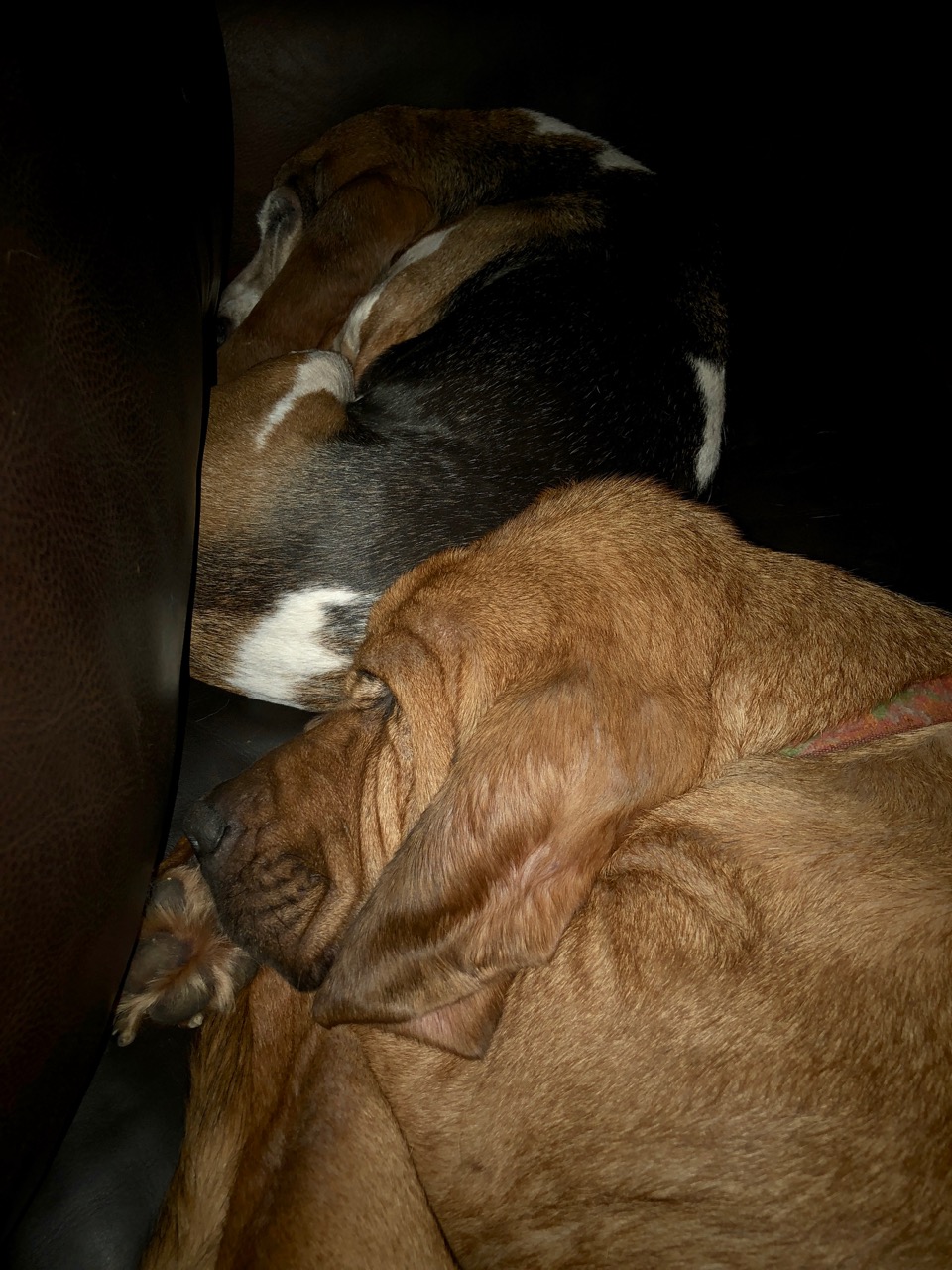 The light snow covering the ground this morning is already disappearing as I write this. I'll be mowing parts of the yard this Thursday as the temps move into the mid 70's for a couple of days and then drop back into the 40's a good 15° - 20° blow average temps for the month of April.

You will notice the comments section is open again.

Basically the hounds and I are doing okay, taking one day at a time here in 'the tropics' of Southern Indiana.
at April 09, 2018