Pace Is Fast And Furious 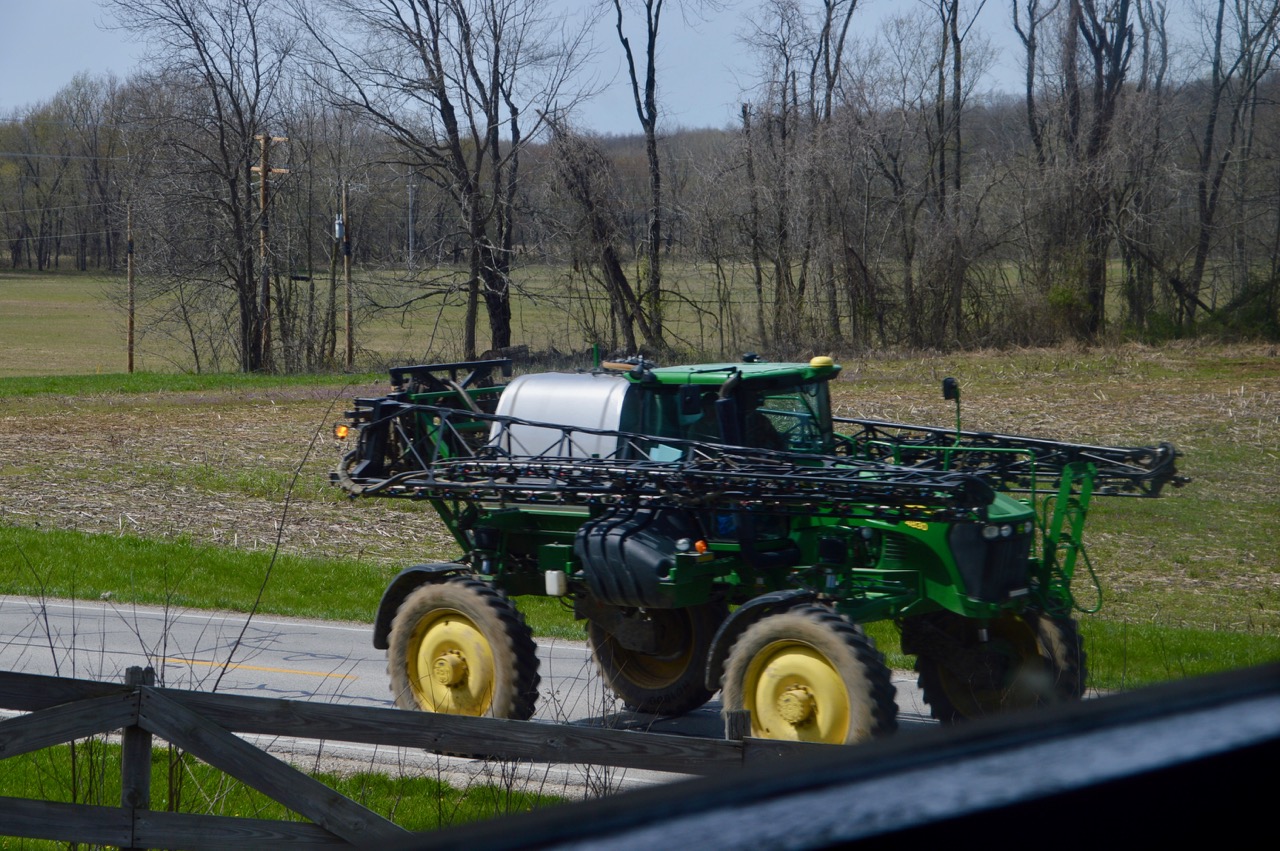 With nice weather yesterday there were a lot of farm equipment just like this on the highway in front of the house. With rain predicted for Monday, farmers were plowing, spraying anhydrous or fertilizer on their fields. Due to the two fields within view of the house being in an official flood zone, they usually don't start any kind of work until later in the spring. Here at home today a lot of things could be happening inside and outside ... depending on my motivation. 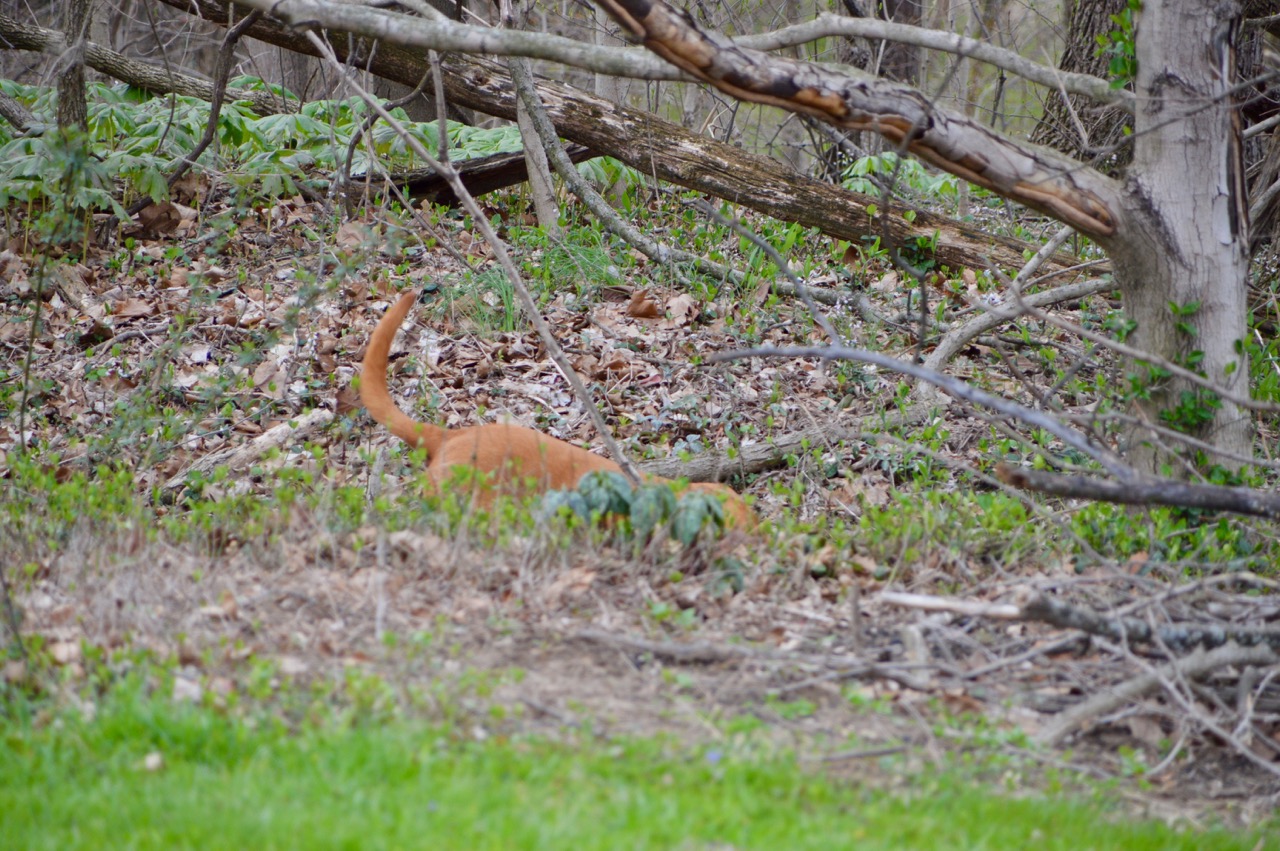 Before I could barely get outside this morning Sadie was already checking out the field drainage ditch that moves behind my burn pile. I have never seen water in this ditch but based on the dugout shape of it, there must be some kind of drainage from the field. 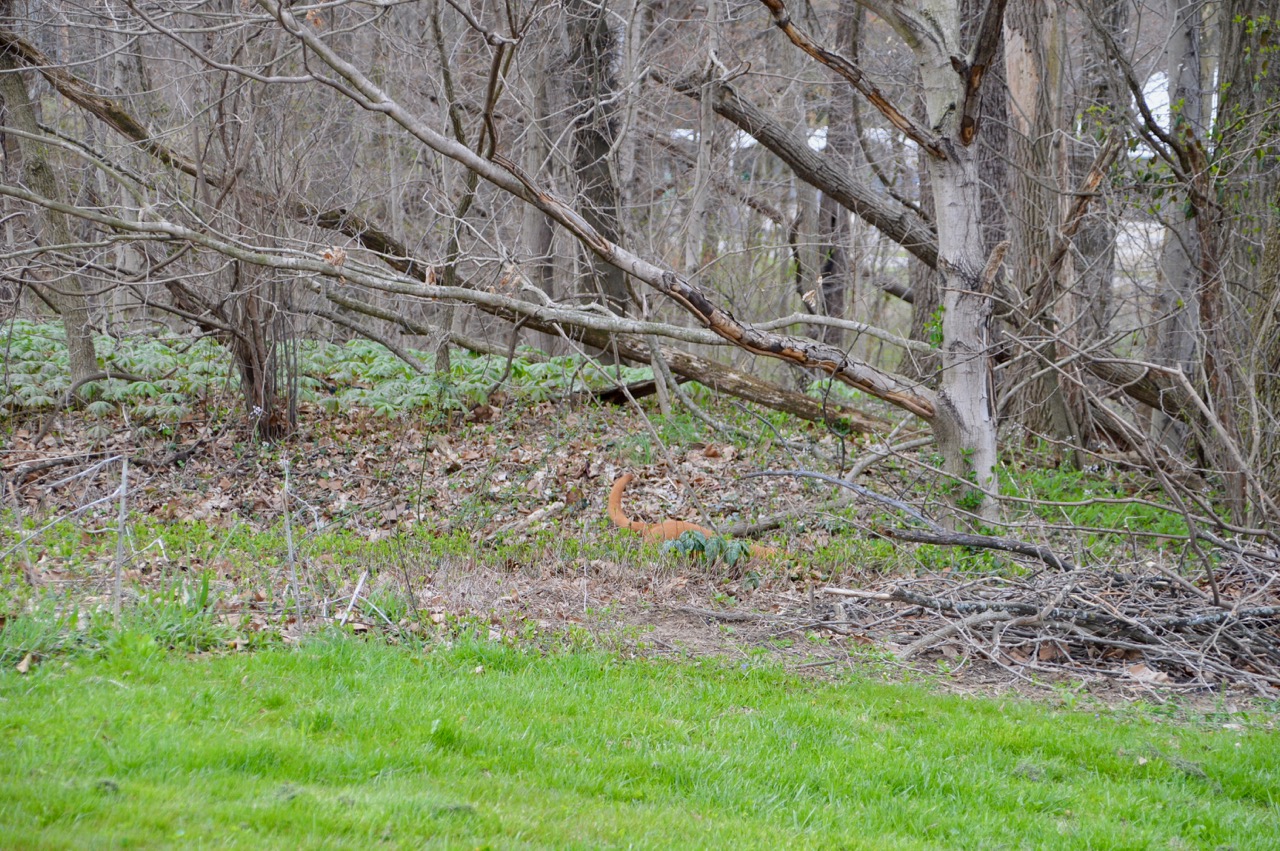 I could tell early on that Stella was going to march to her own drum beat today. I let her do what she wanted during the walk Sadie and I took. At no time did I call her name to follow us or to verbally herd her in the direction of the house ... she was on her own clock. 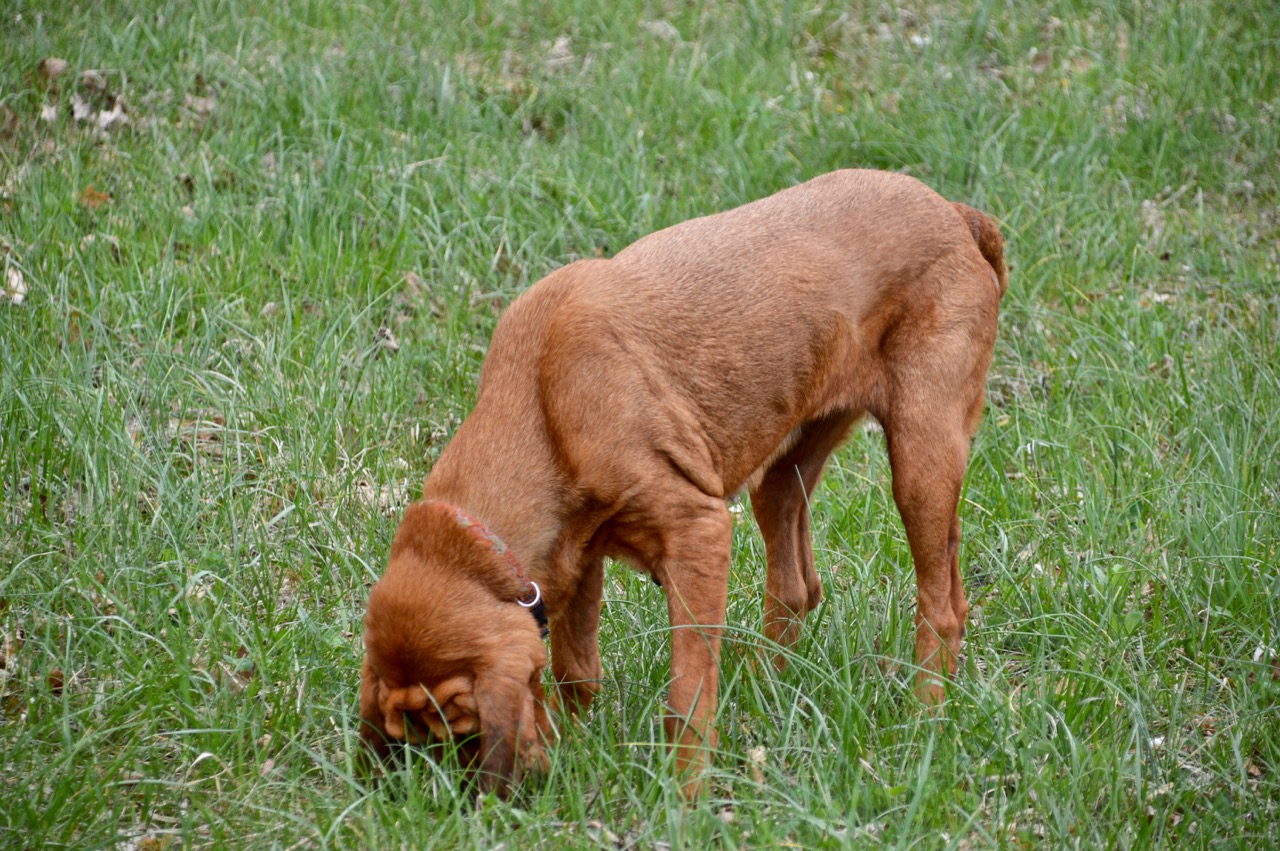 Although it was warm enough just to wear a light jacket, Heidi was back in bed sleeping after her breakfast with no intentions of walking this morning nor getting her picture taken. She also is always on her own schedule. 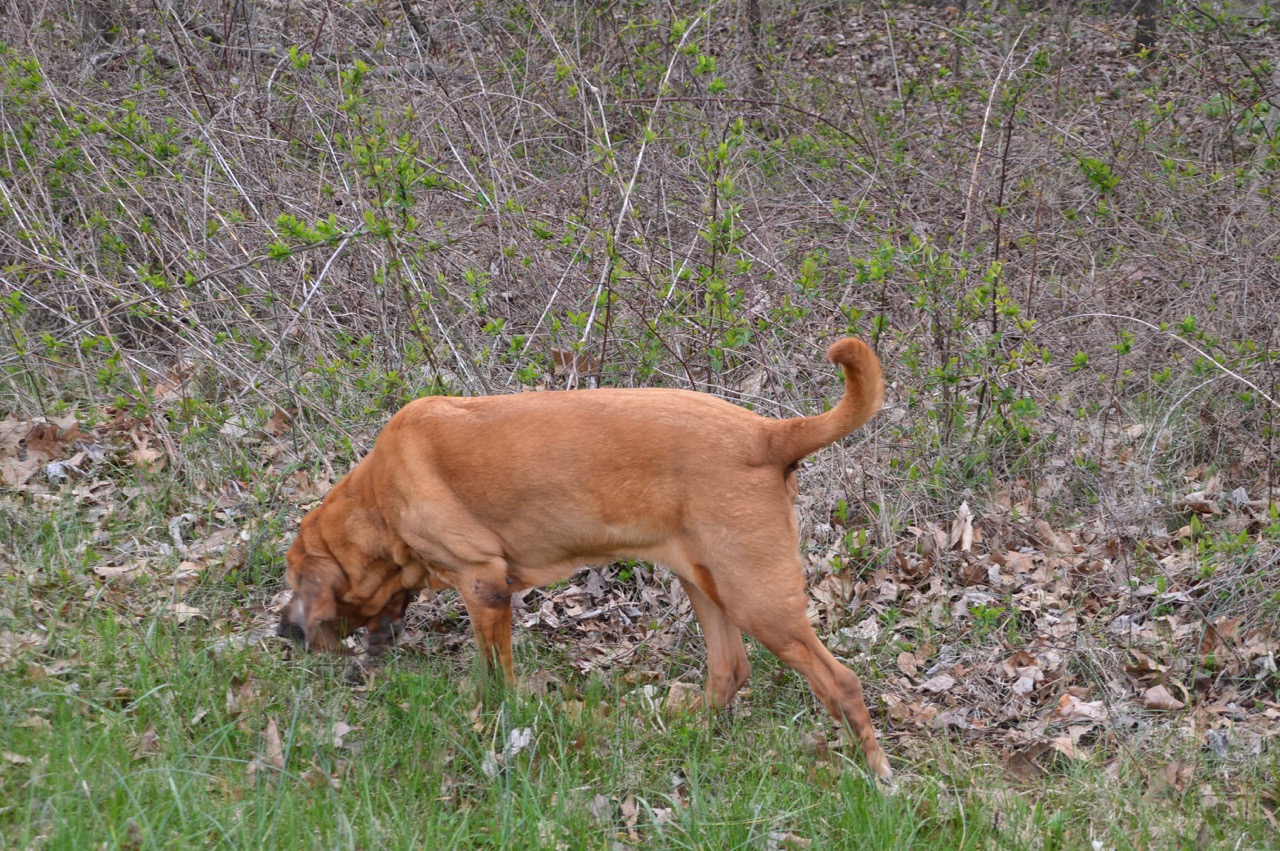 While walking I was going through a list of things to do today in my head. Like always what gets done will be determined by the time of day or night. I have a baseball game to watch at 2:15pm, an IndyCar race to tape and watch after the ballgame sometime and a Pacers NBA playoff game to watch tonight. A DVR makes all of that convenient if I decide to chose to work the 'to do' list during the daylight hours. I'd also like to take another drive in the Z4 today on one of the many routes we can choose from. 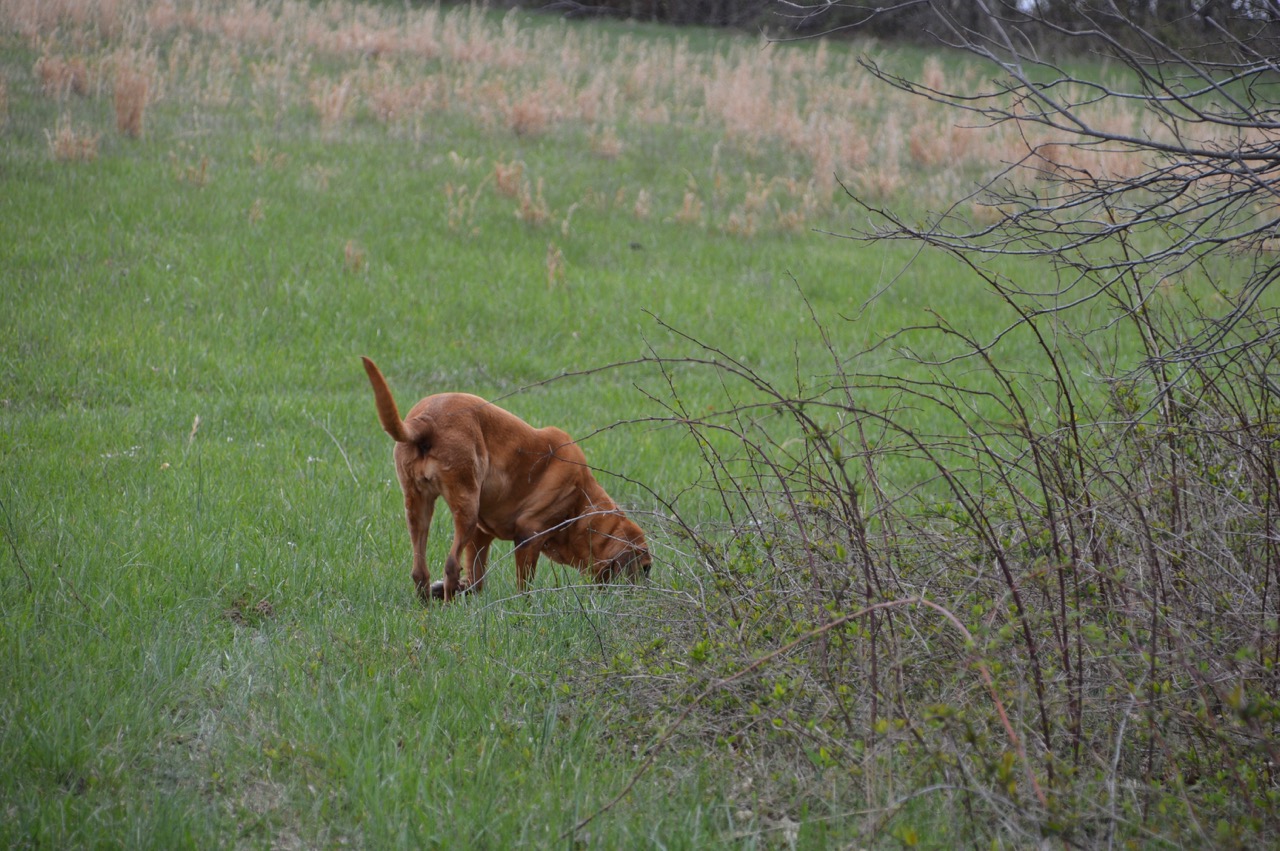 Like I said ... Stella was marching to her own drum today. 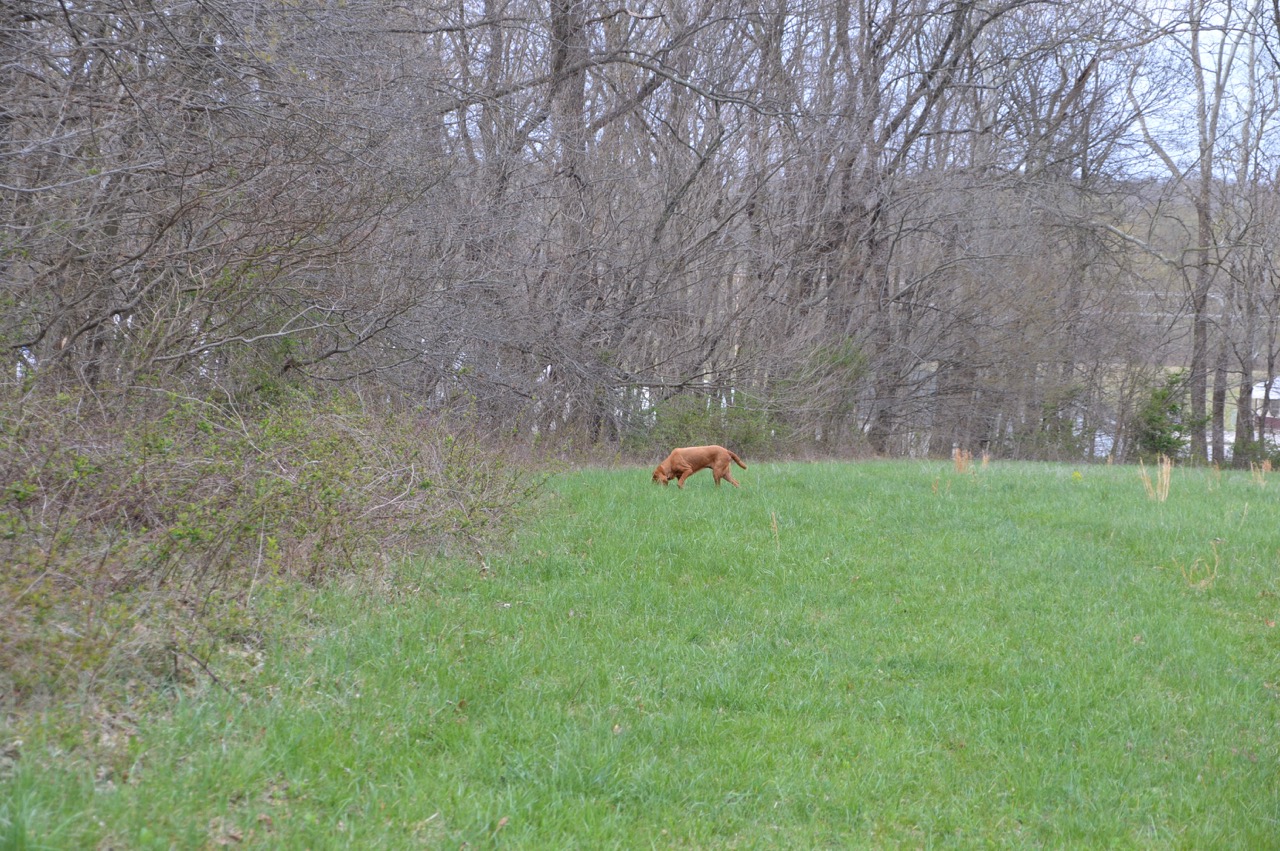 No, I never called her name ... I just kept walking with Sadie. 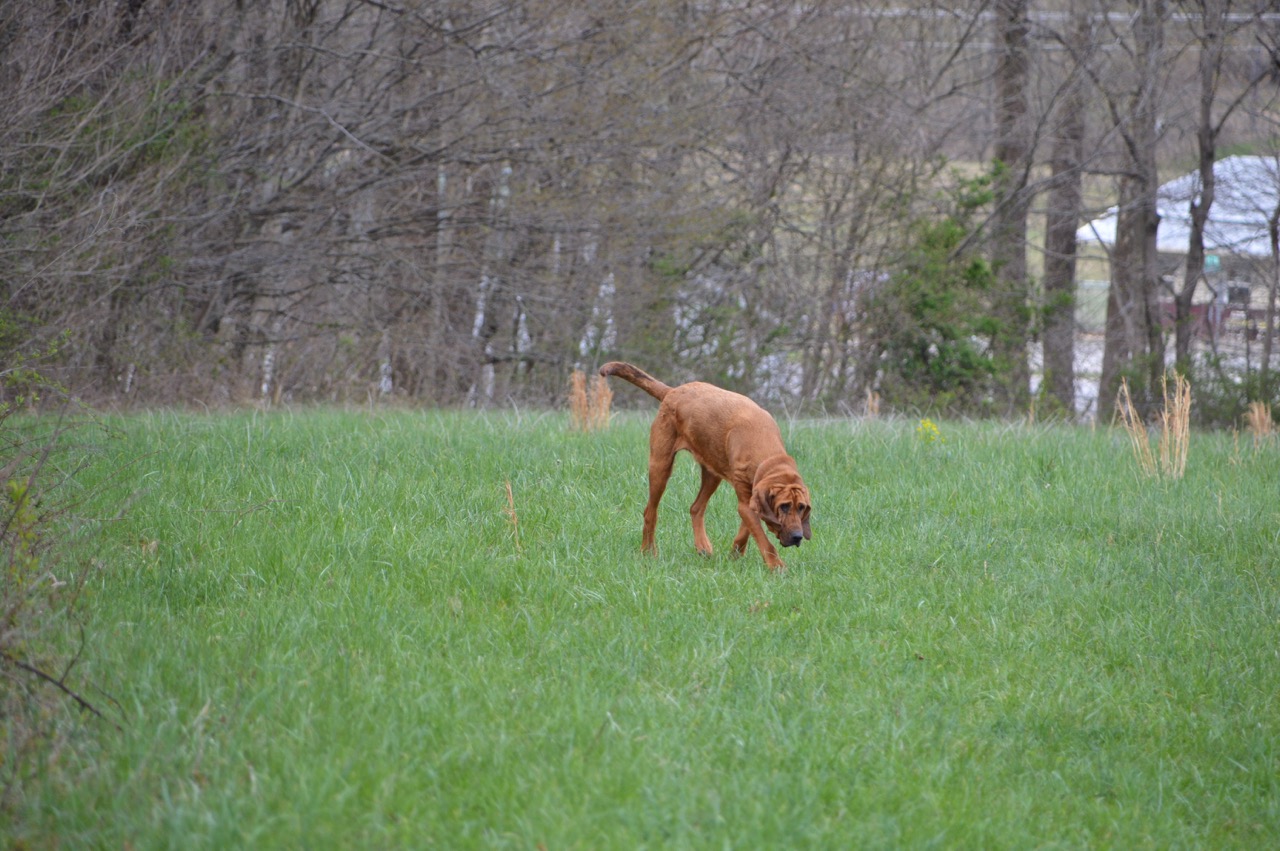 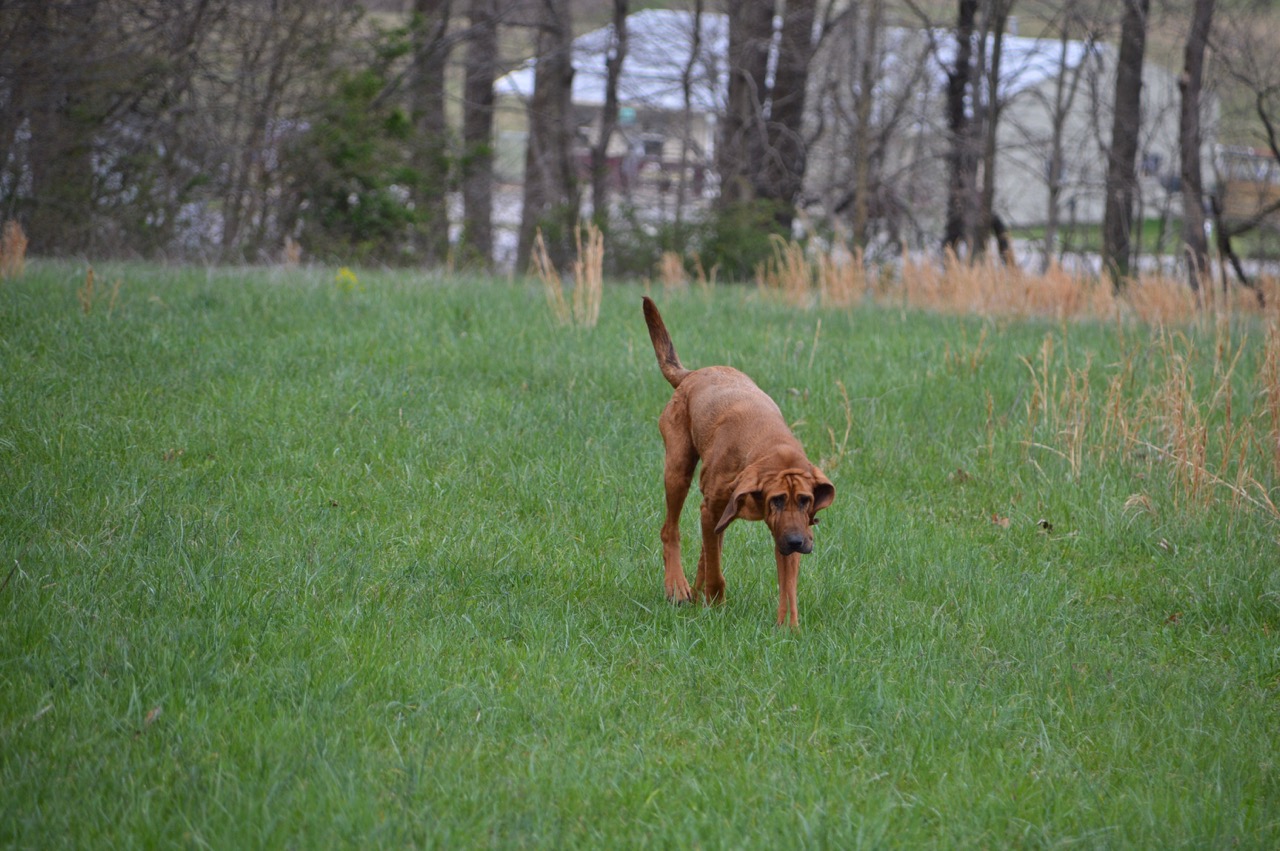 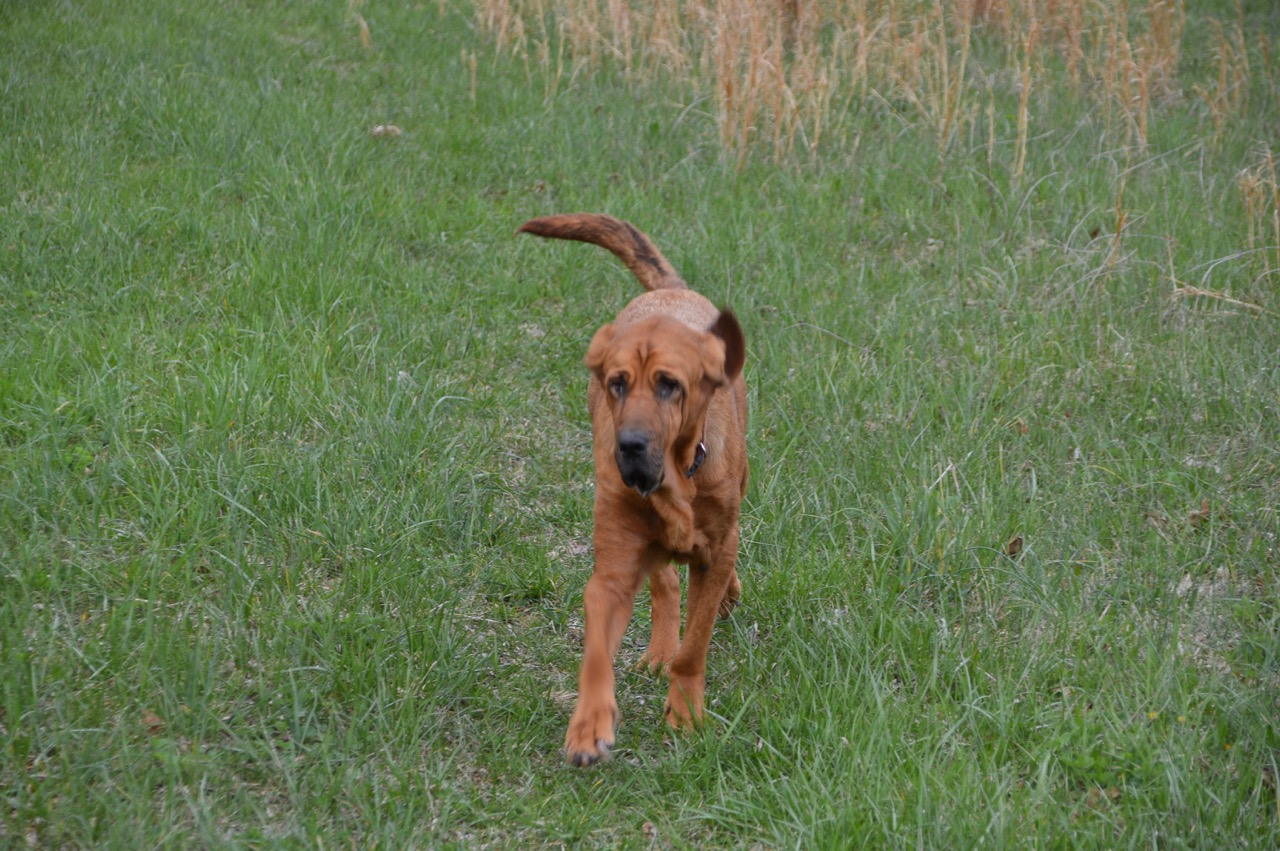 Sadie may not pay much attention to Stella during the walk unless she sees her getting out of bounds or heading in the opposite direction of us ... then she takes the supervisory role. 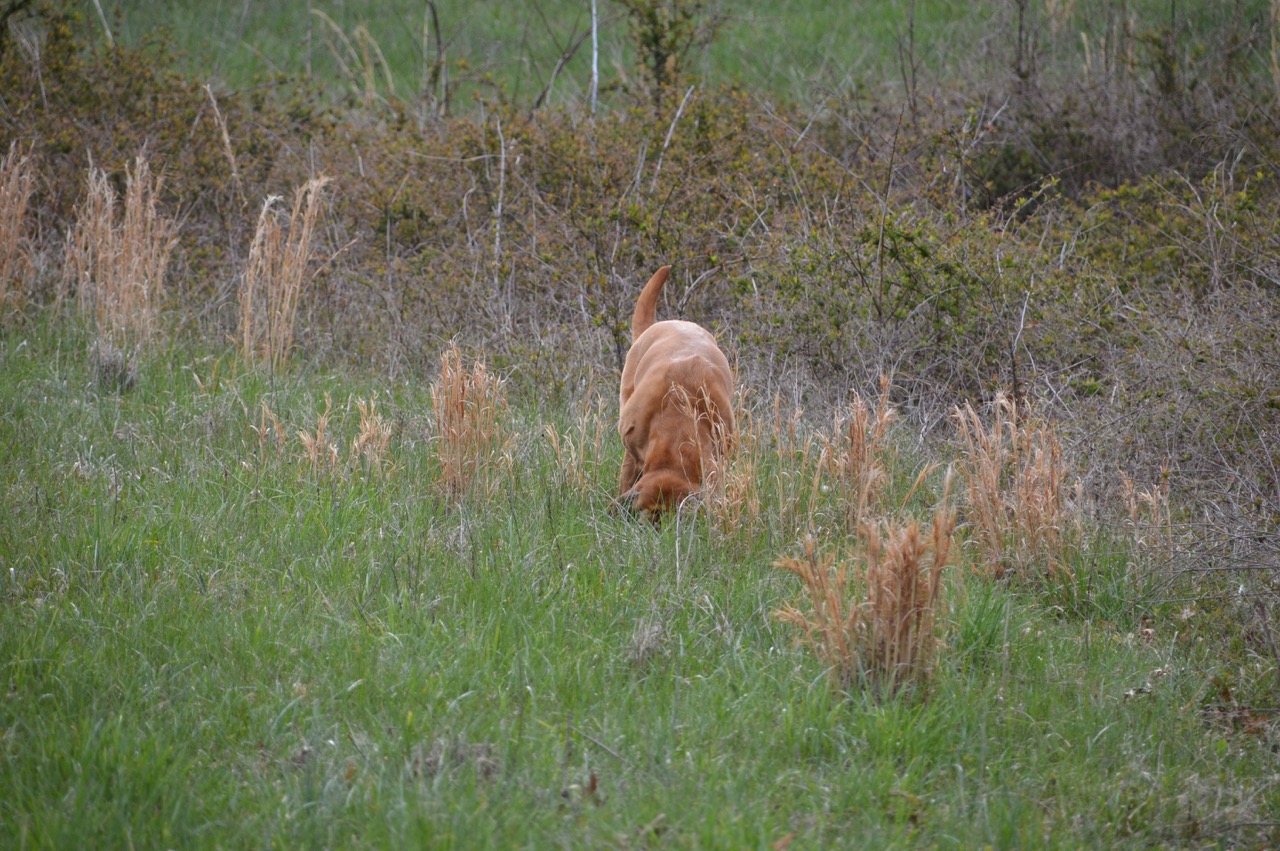 I mentioned I had added the free Flipboard to my reading list. You can chose which subjects you want to follow and Flipboard does the rest by supplying you articles that are not listed on the mainstream media. In some cases the topic might be the same but are written by web authors not associated with newspapers or magazines.

Tijuana is a town I use to spend a lot of time in when I was 40 years younger and living in Southern California. There were a lot of things to do there from places to eat, their horse race track or enjoying the entertainment the city provided. It was shocking to see today on a headline in Flipboard that since January 1 of this year 650 people have been murdered, related to drug cartels fighting over neighborhoods. 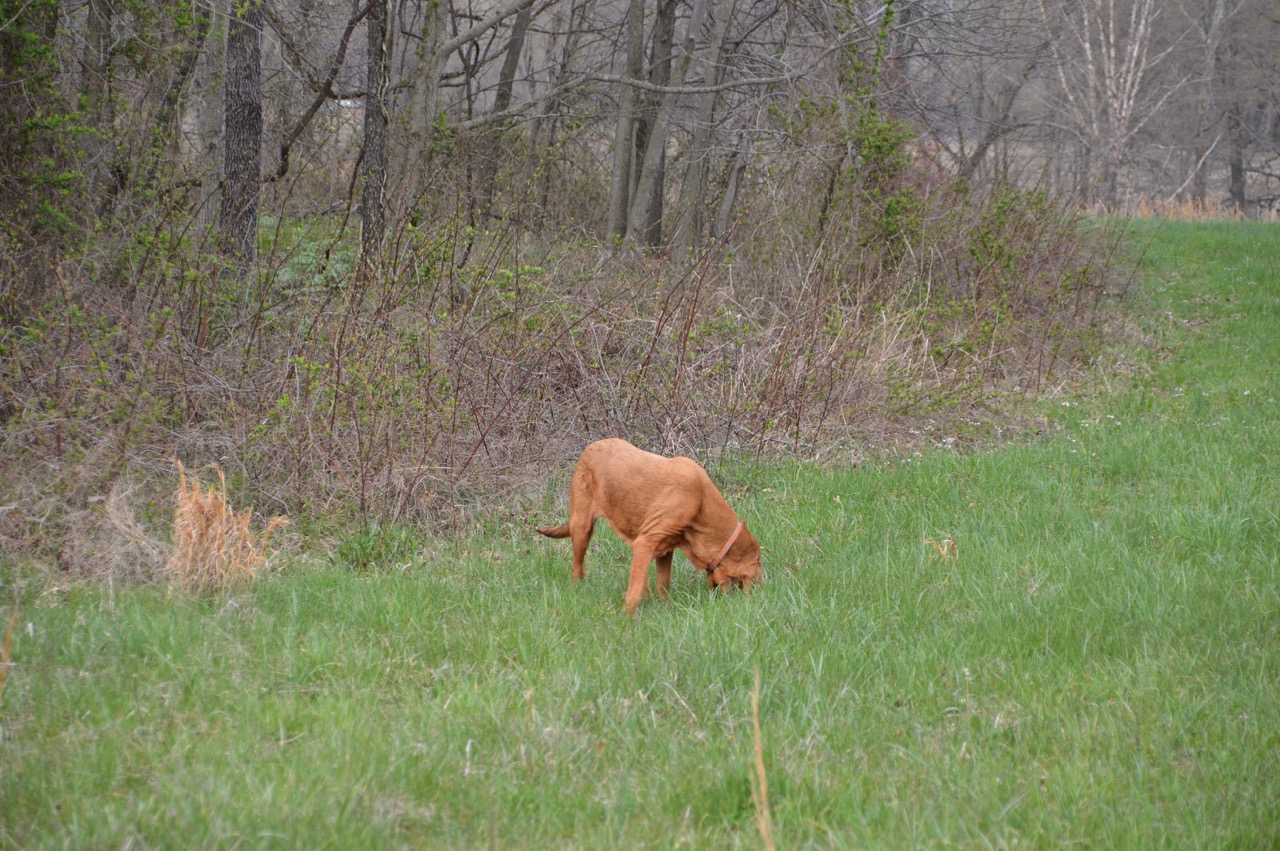 It was also shocking to see on tv the other night where a California senator was talking about the gang problems in a town called Oceanside California, a place I either lived in or 5 miles away in Carlsbad for close to 9 years. It is hard to even imagine either of those two stories being possible in towns where you could walk or drive in while feeling safe. 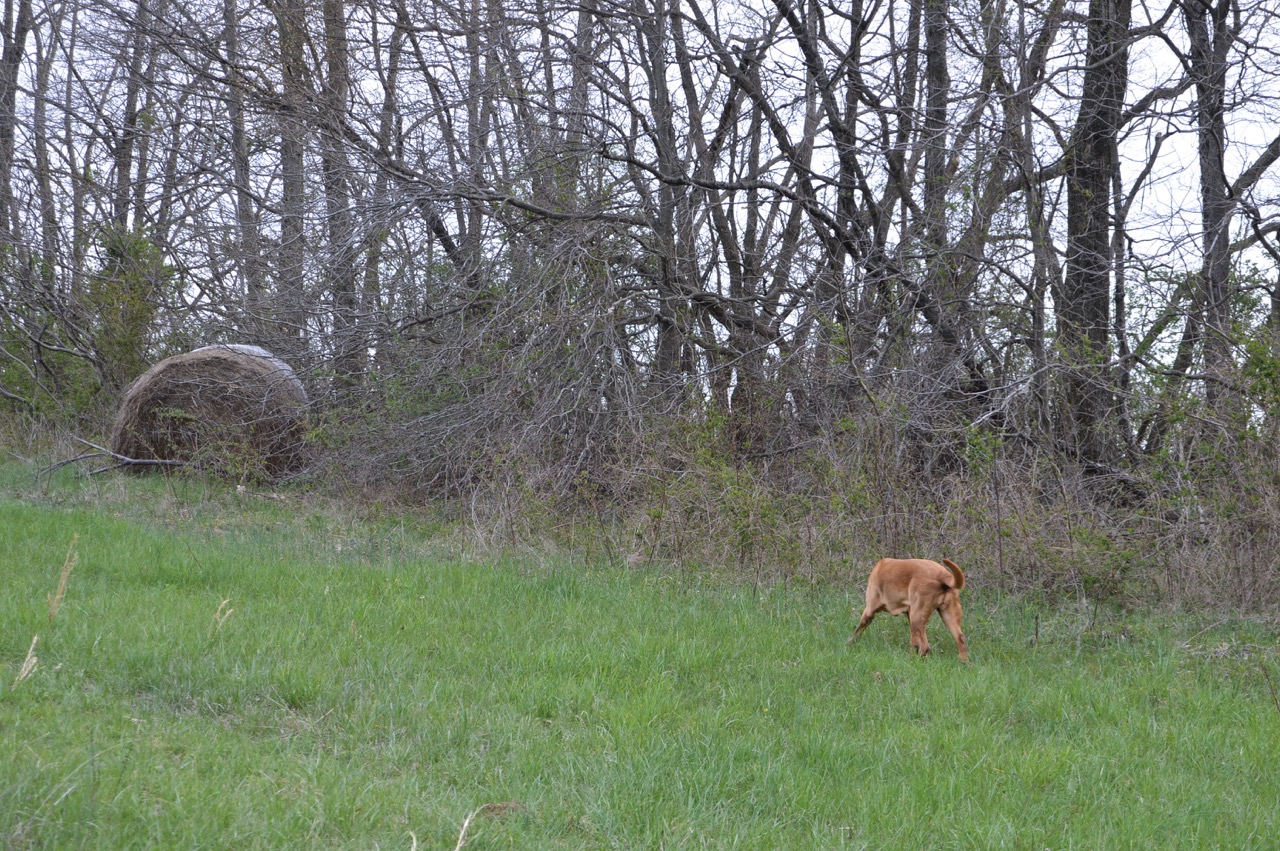 That's what makes living here in 'the tropics' so nice. The bad thing is, this town is usually closed for the night by 9pm, nowhere to get something to eat ... yet low to zero crime.

Looks like the neighbor finished plowing his large field yesterday. A sure sign that Spring has officially arrived ... finally. 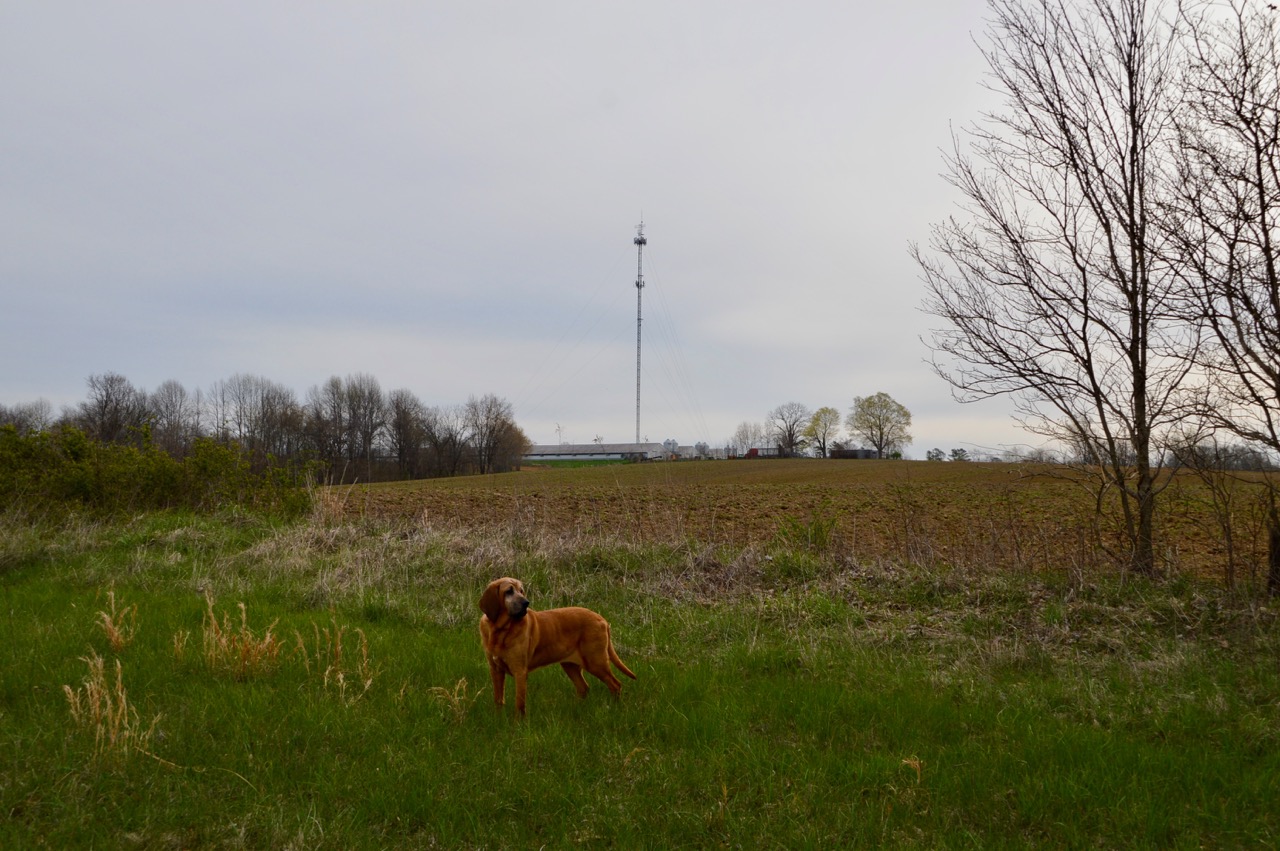 As I looked for Stella along the wood line to the left of me, I couldn't find her. Then out in the middle of the field there she was with her head down and walking fast, heading north, as if she knew exactly where she was going. Without me saying a word, she stopped and stared right at me. 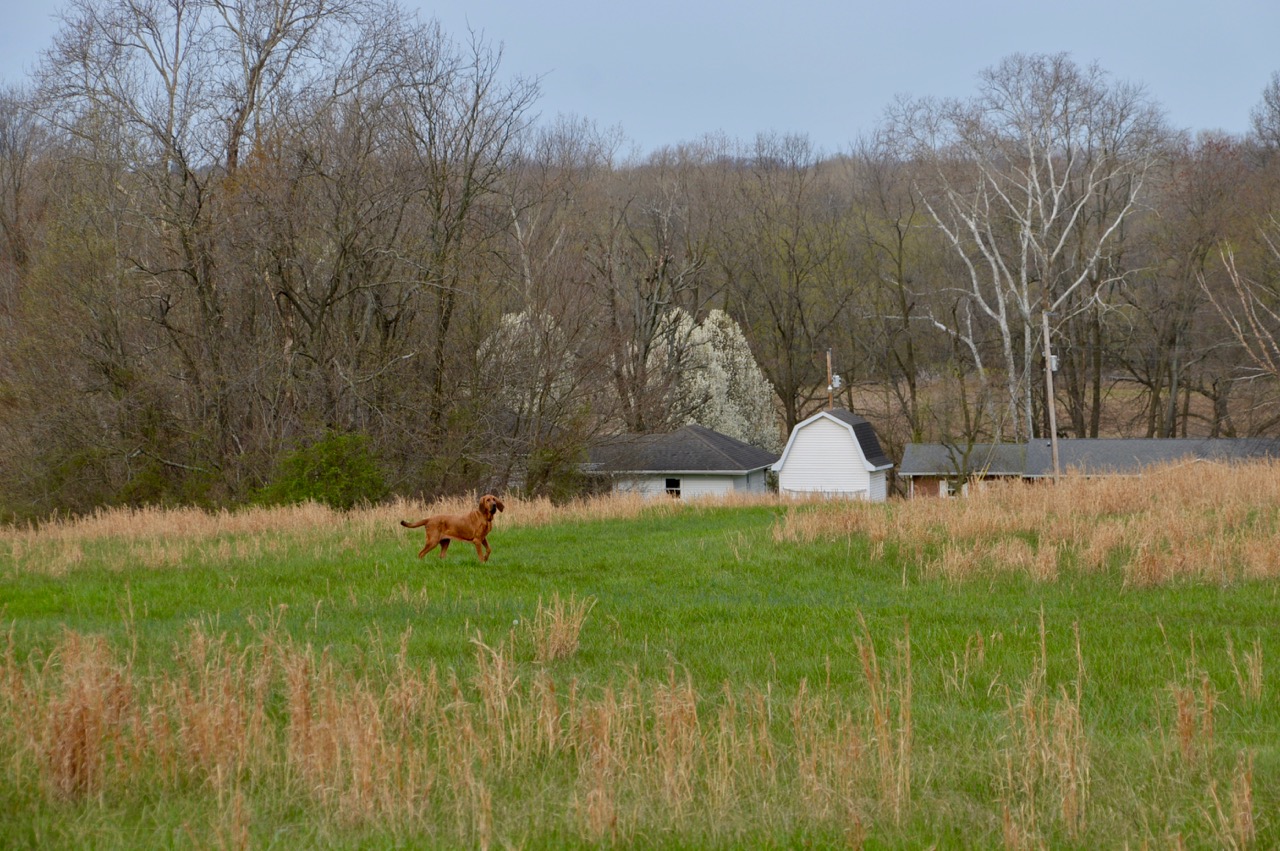 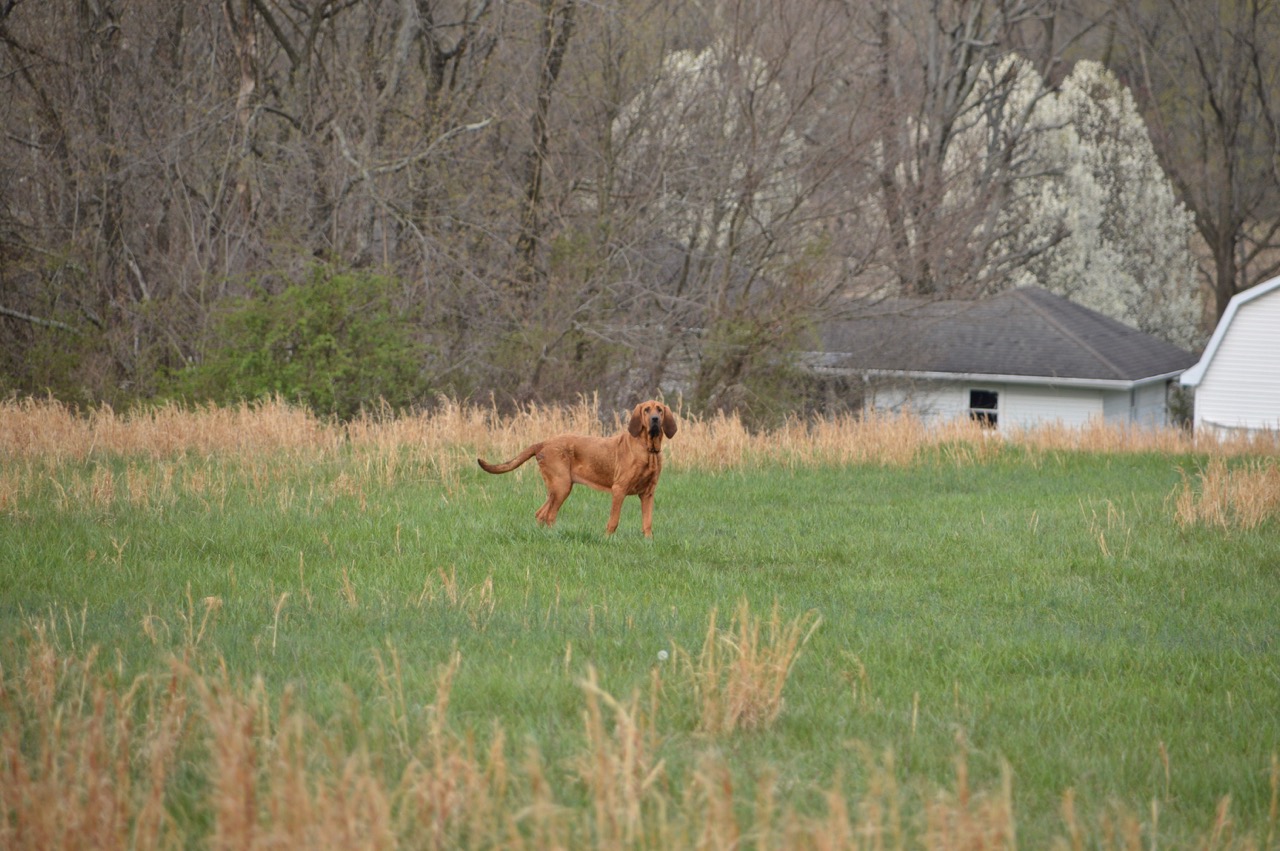 When she decided to ignore Sadie and I, heading her own way north ... that is when Sadie decided it was time to step in to let her know that was the wrong thing to do ... running after her to get her headed back in the direction of home. 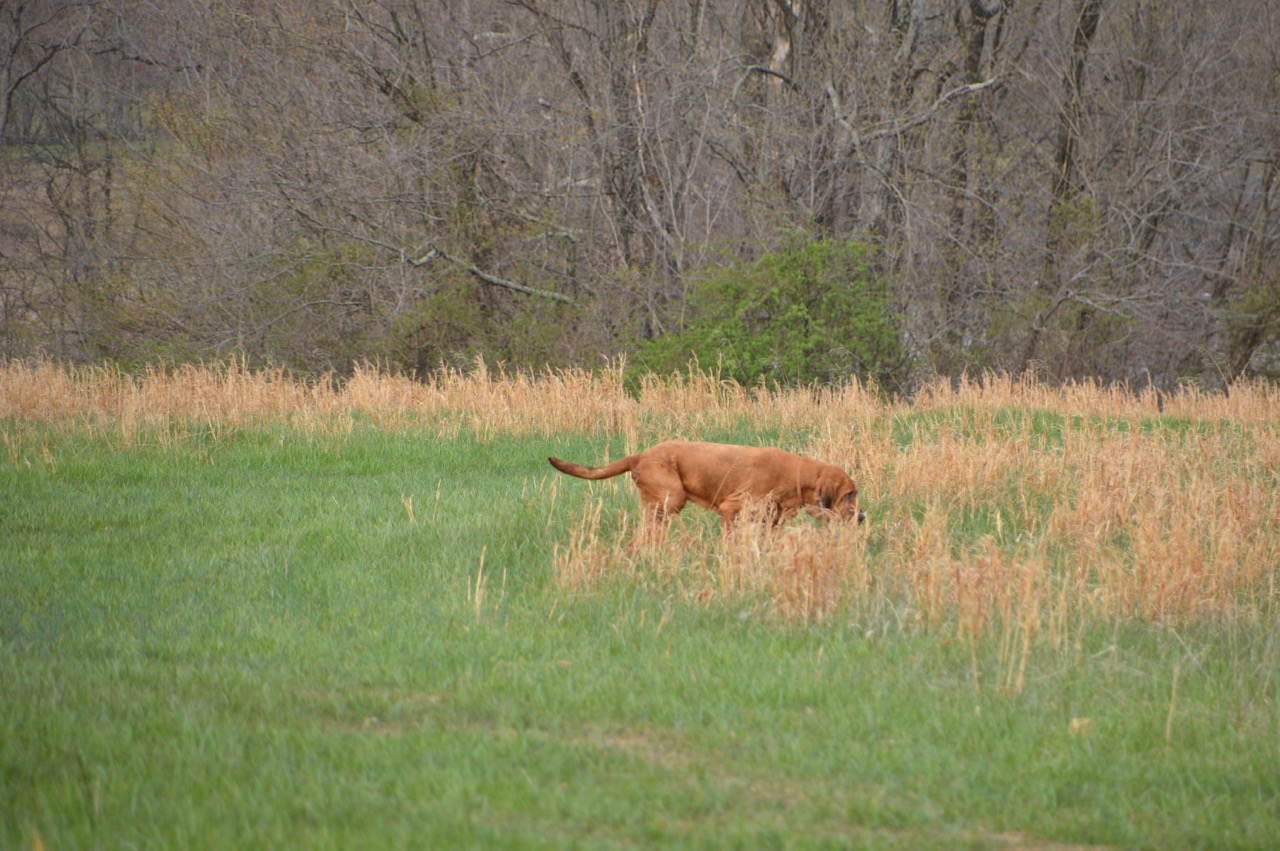 I did not say anything to Sadie either ... she did this on her own. 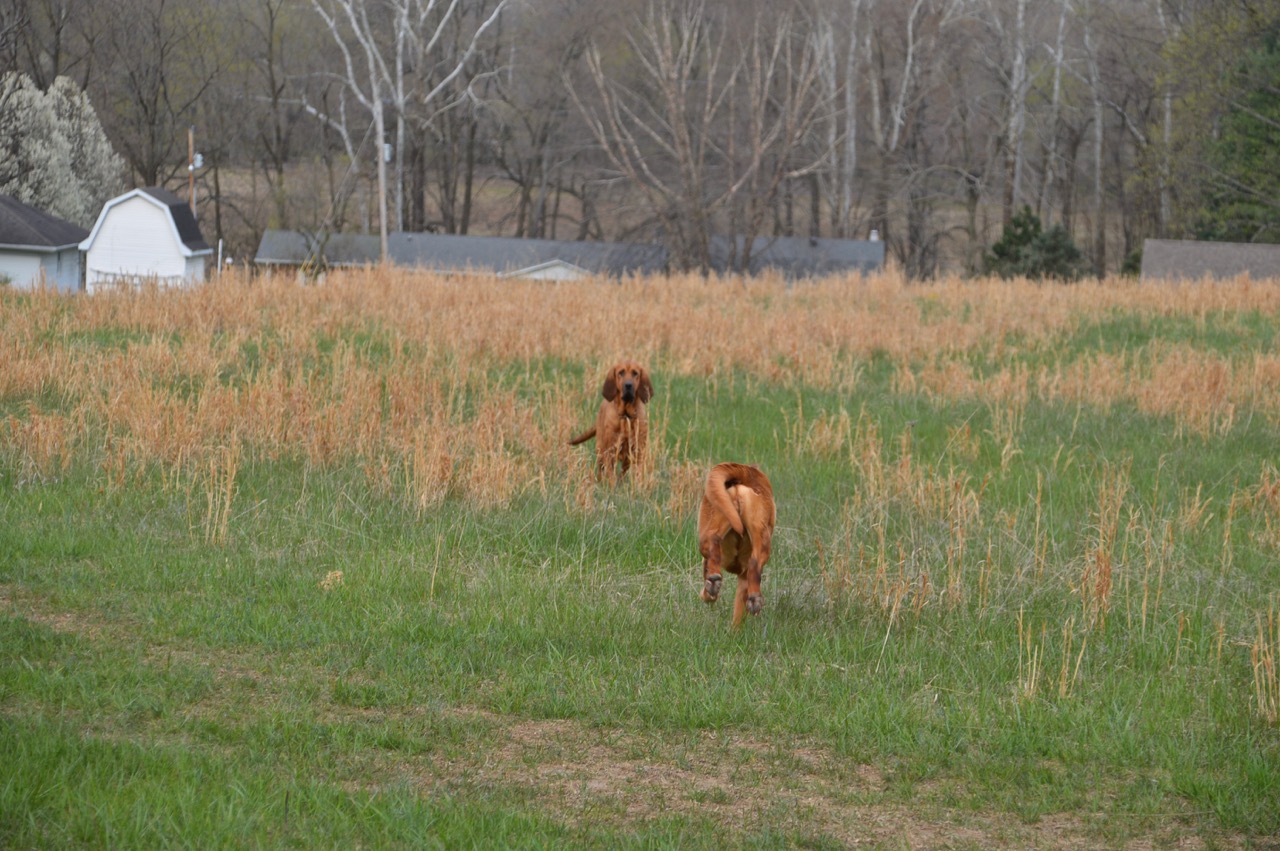 I have thought more about moving again, only this time with a change in strategy as far as looking at houses. One of the main hold ups is me not wanting a mortgage payment for the rest of my life, since it's been years since I have had one. I never planned on having a mortgage payment during my retirement years. That might be too 'old school' in theory. 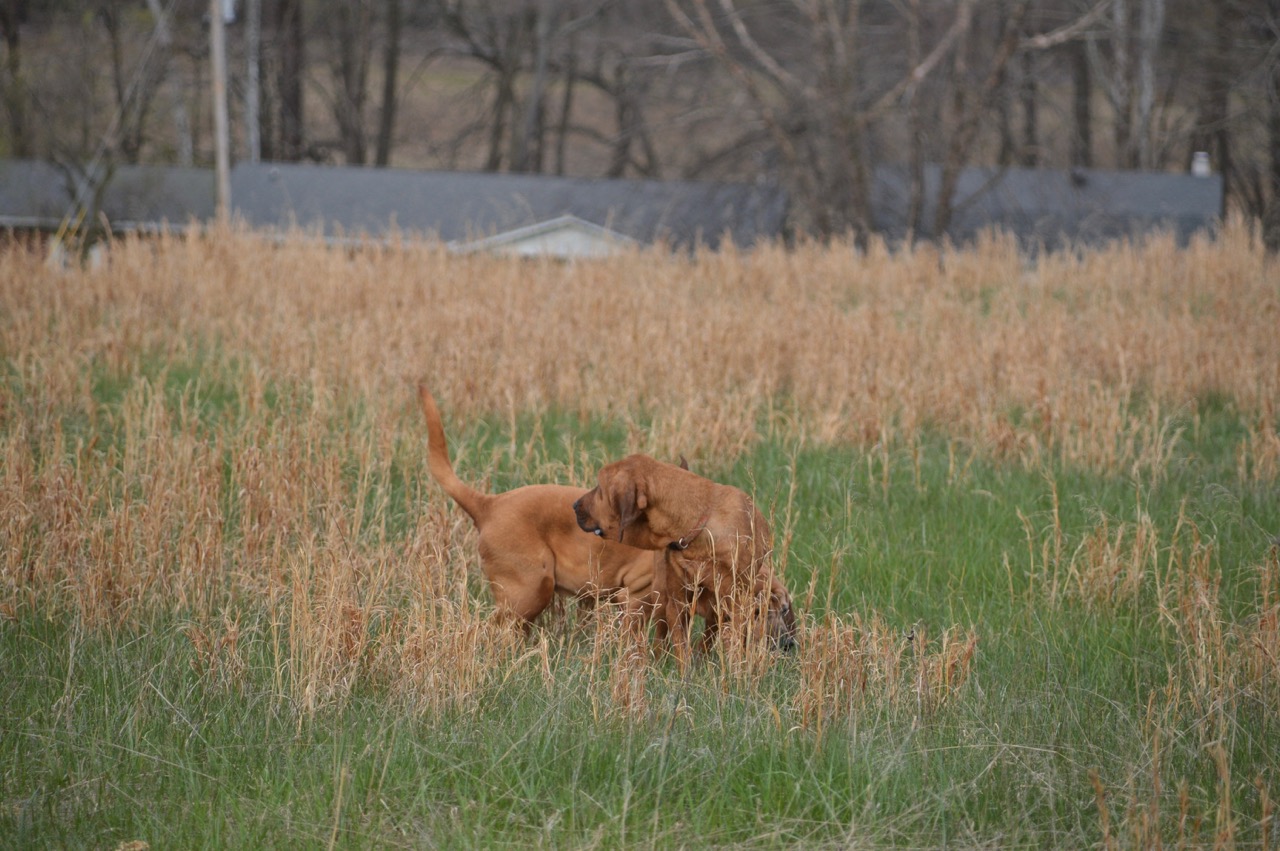 So the other night I started looking at houses in the town out west, that might need some work, a little paint or yard cleanup and even some new flooring installed ... all for a lower price range than I had been looking at and where it would be an even swap financially if/when I sold mine.

I came up with some new houses to look at and some of them had been remodeled inside, where the only thing I would need to do is paint outside in a color I like and work in the yard installing a 'desert landscape' so I would not have to spend time mowing grass. 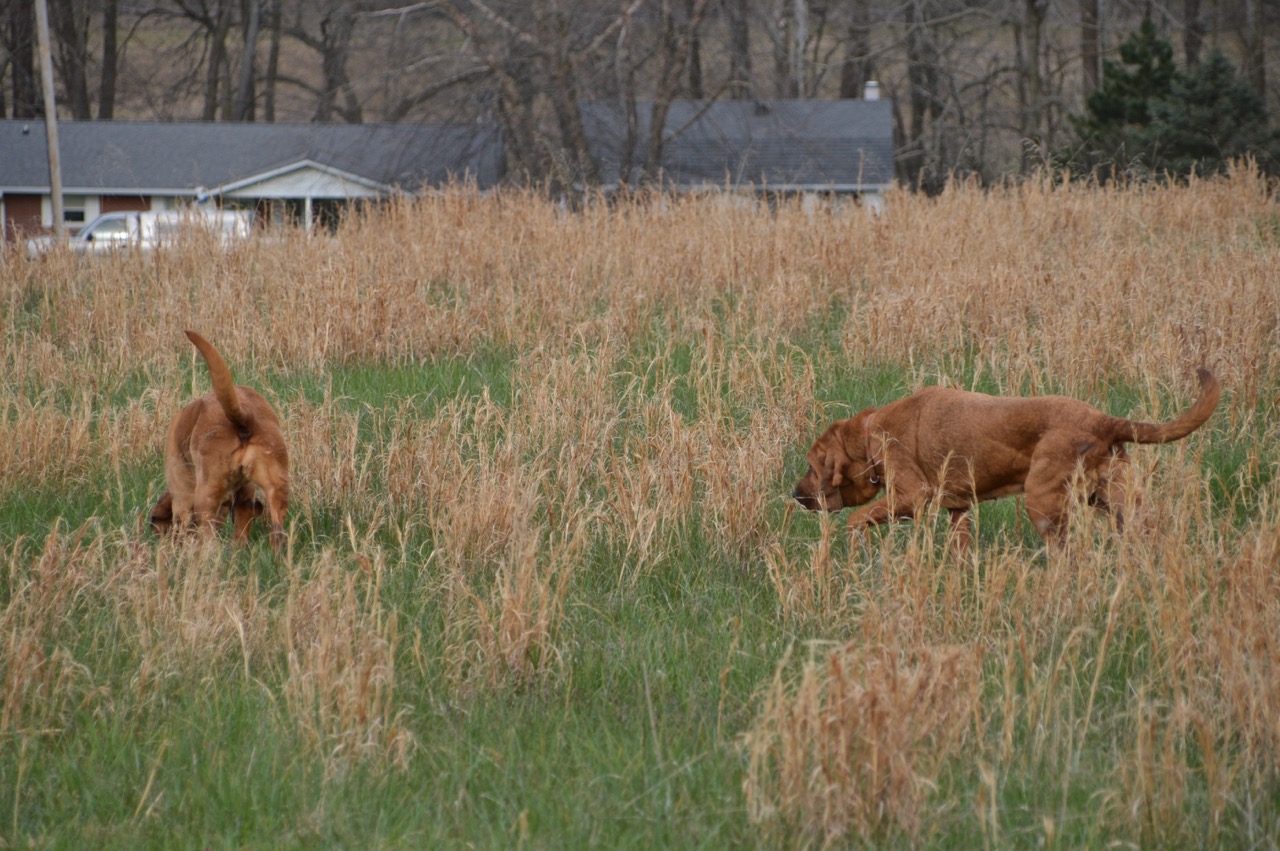 All the same questions linger in back of my mind on the decision to move. Those have never changed really since this blog started in October 2011. Although at that time I was thinking of traveling full time in some sort of RV and with only one bloodhound since Stella had not arrived yet. (2015)

Some people say if you can't make a final decision then you need to stay where you are. Others say if the urge is there, then move even if you are undecided and things will workout once you get there. I use to put very little thought into moving decisions and it always worked out but as you get older I guess that 'free spirit' becomes hard to maintain. 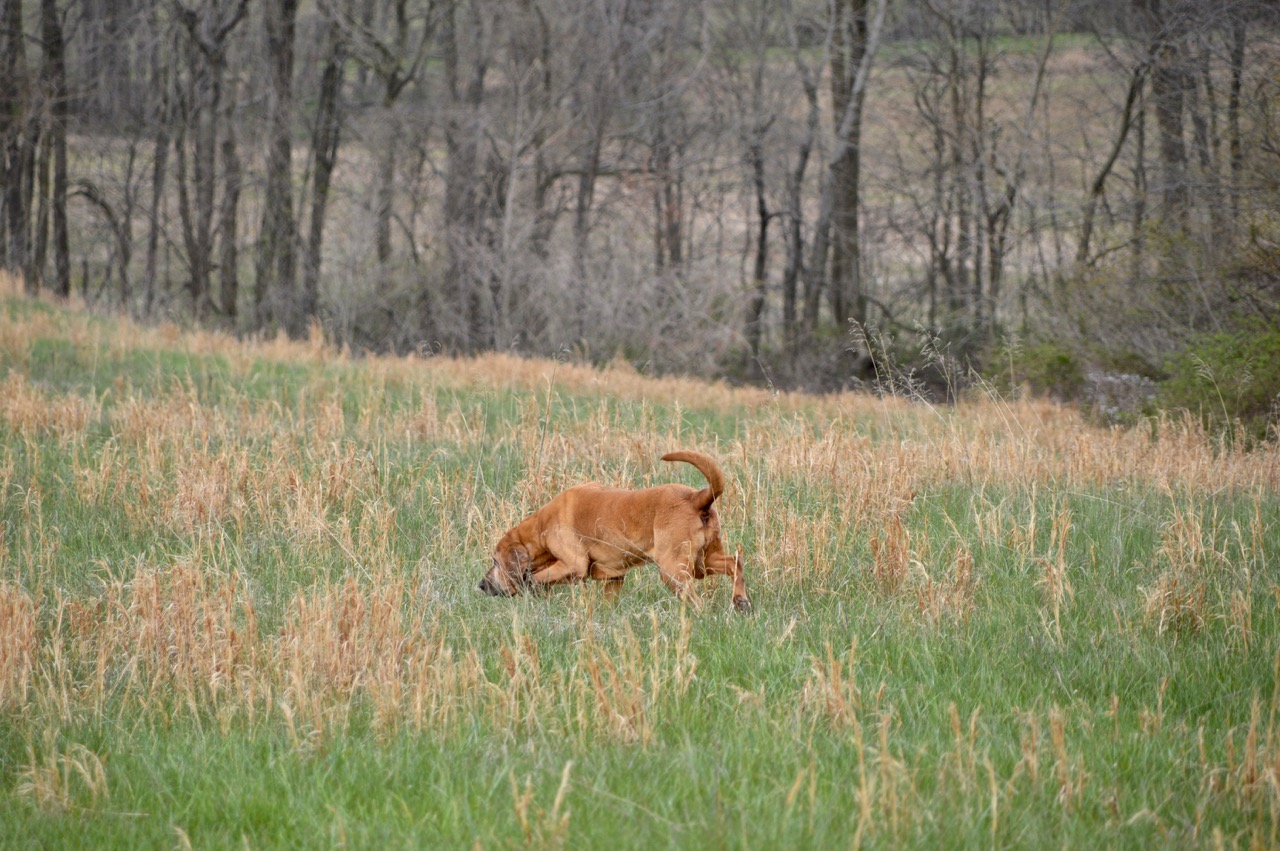 Of coarse this field is perfect for the hounds and it would be hard to leave just because of that. Not only would they have to turn into 'city' hounds but I would also have neighbors living within 25' of me ... could I even handle that? 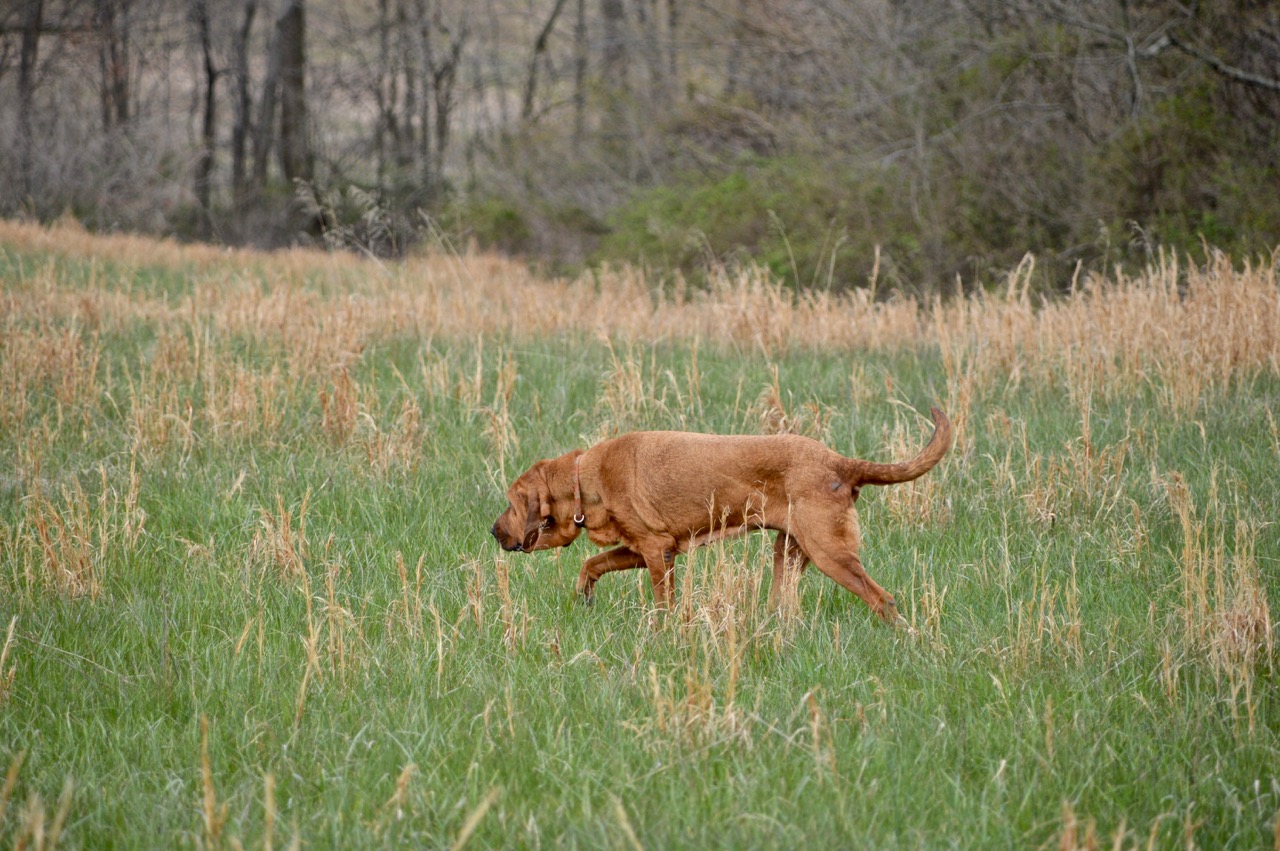 It never changes over the years, I always run different possibilities in my mind and usually decide to delay my moving or traveling decision until after the hounds pass.

There are definitely other things I enjoy about this area besides just this field for the hounds. If I had things I didn't like about it, I would have never stayed here 20 years. So we will see what the summer brings. 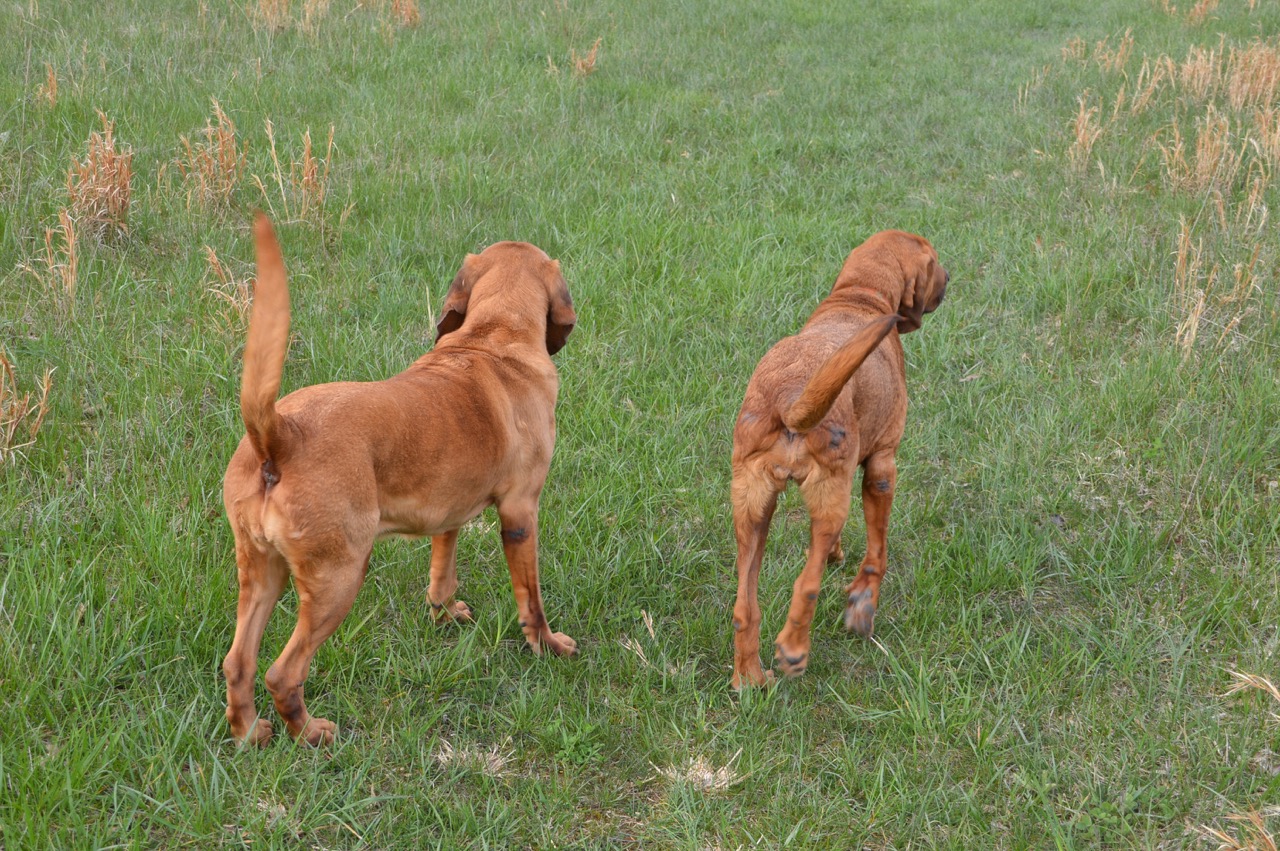 That is about all I have for this morning. I might post some photos of Heidi on my other blog later today. That blog is on my sidebar here called "It's A Hounds Life". 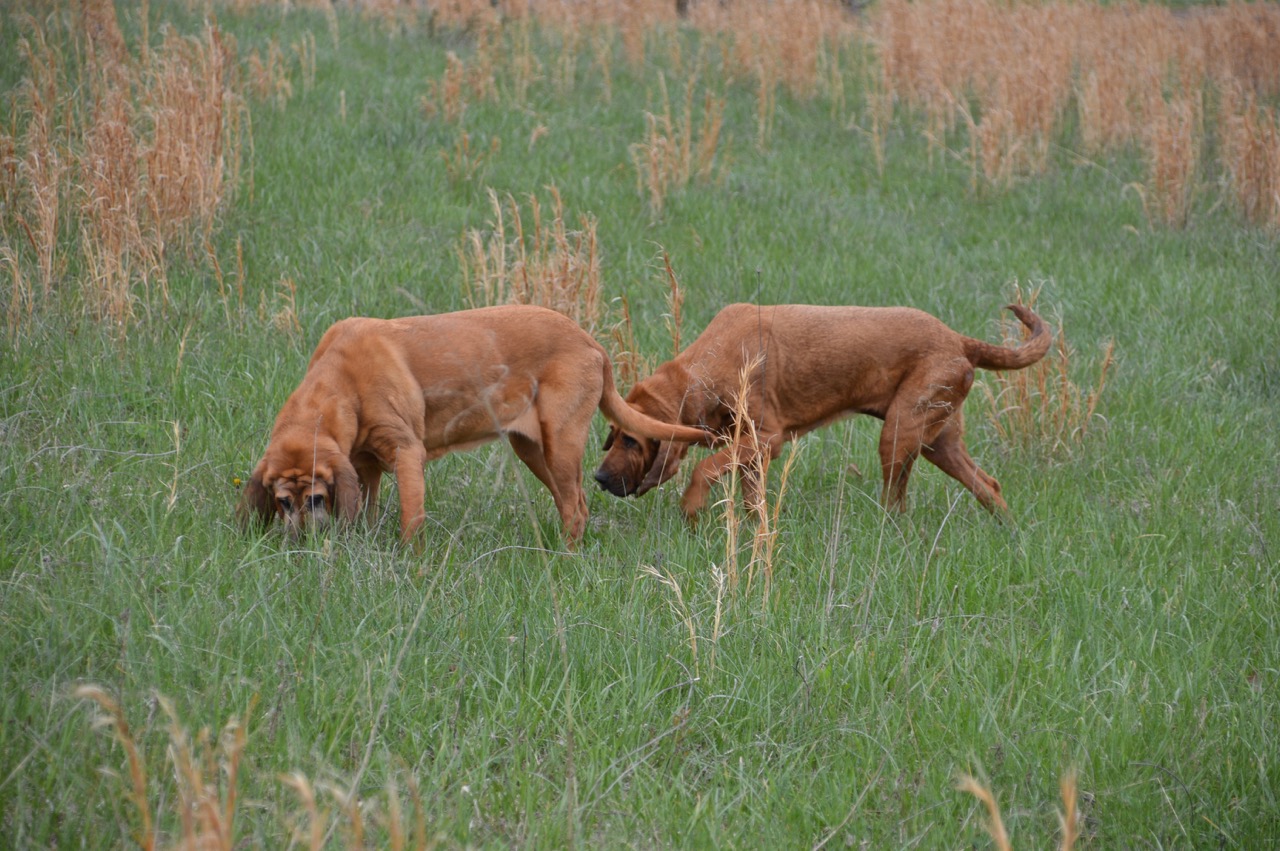 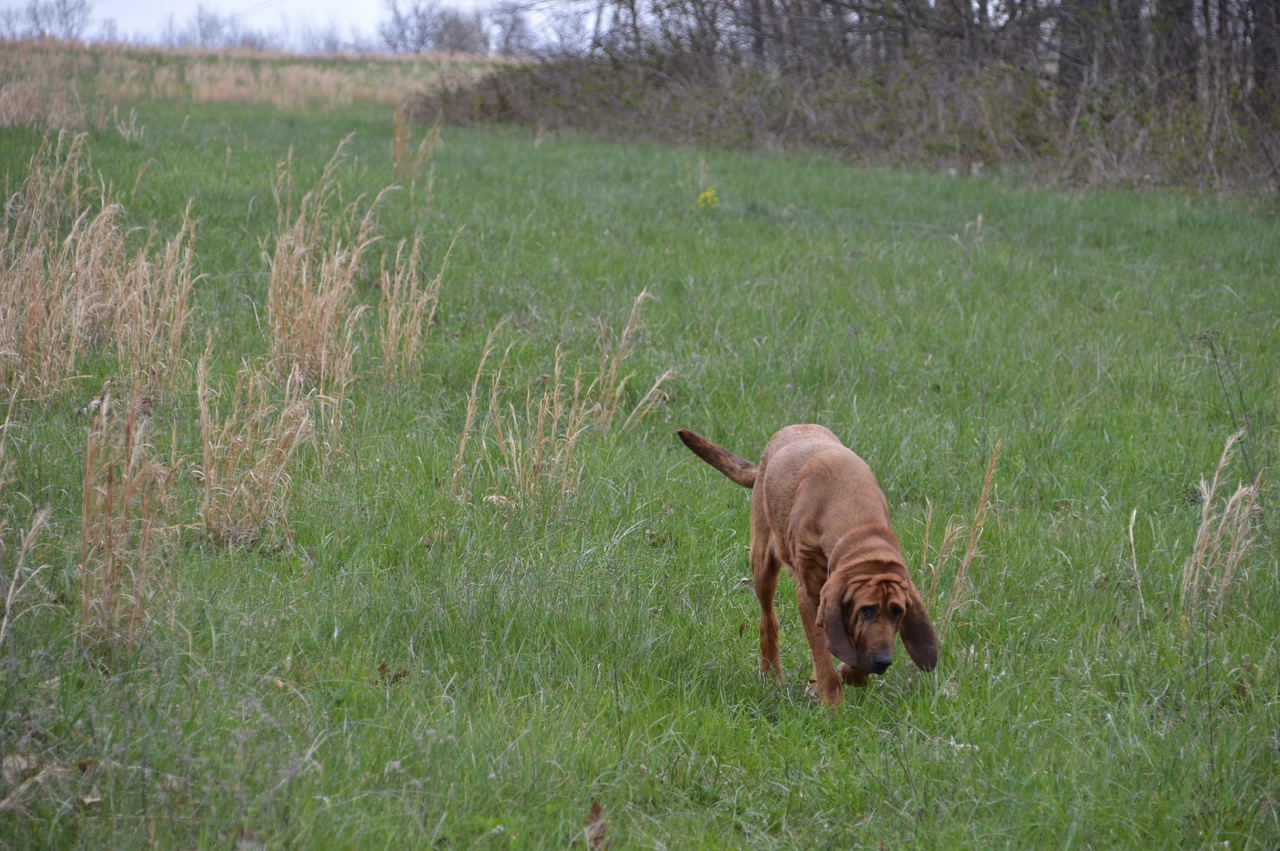 As you can see Stella decided to take a detour as Sadie and I walked into the yard. 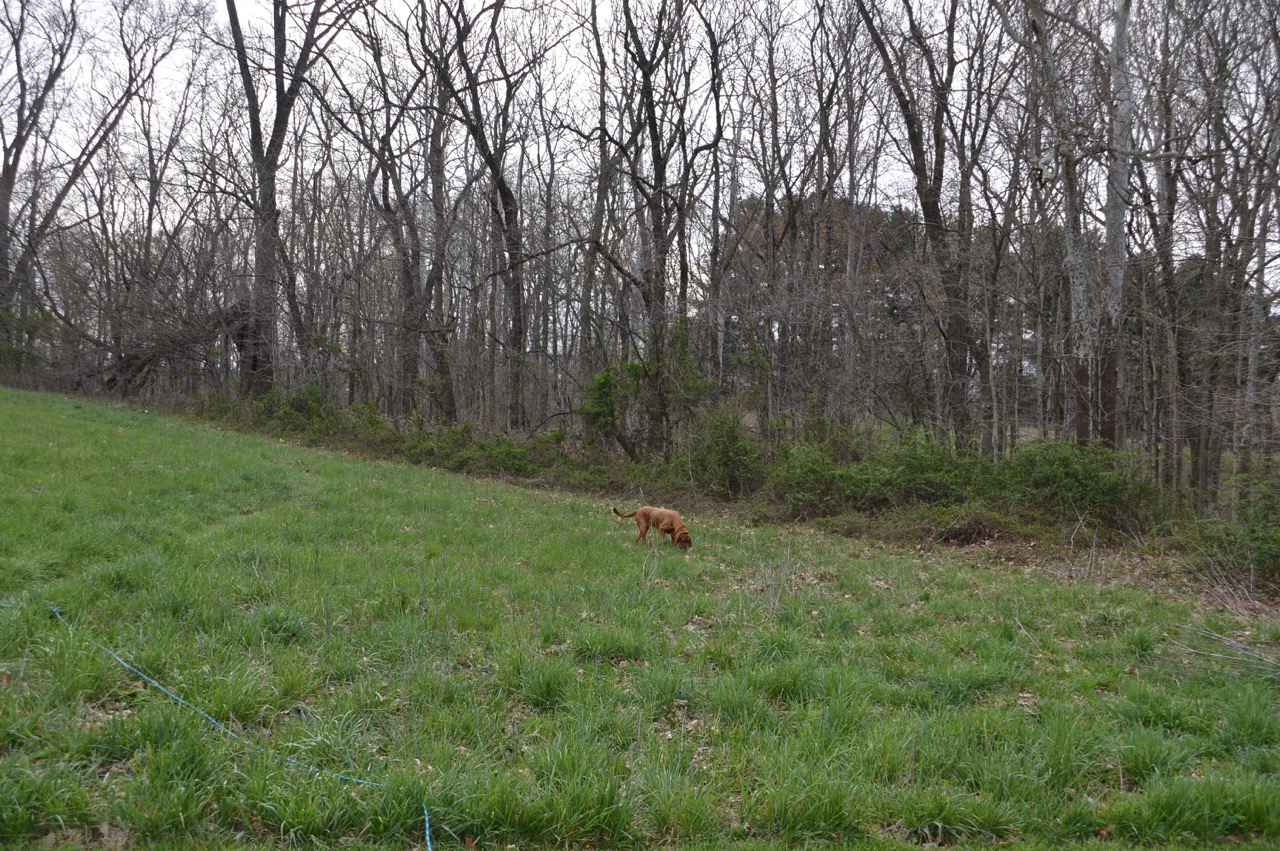 She teaches me to relax about things ... nothing is really that important. You can tell by the look on her face she is giving me a teaching moment on patience.  LOL 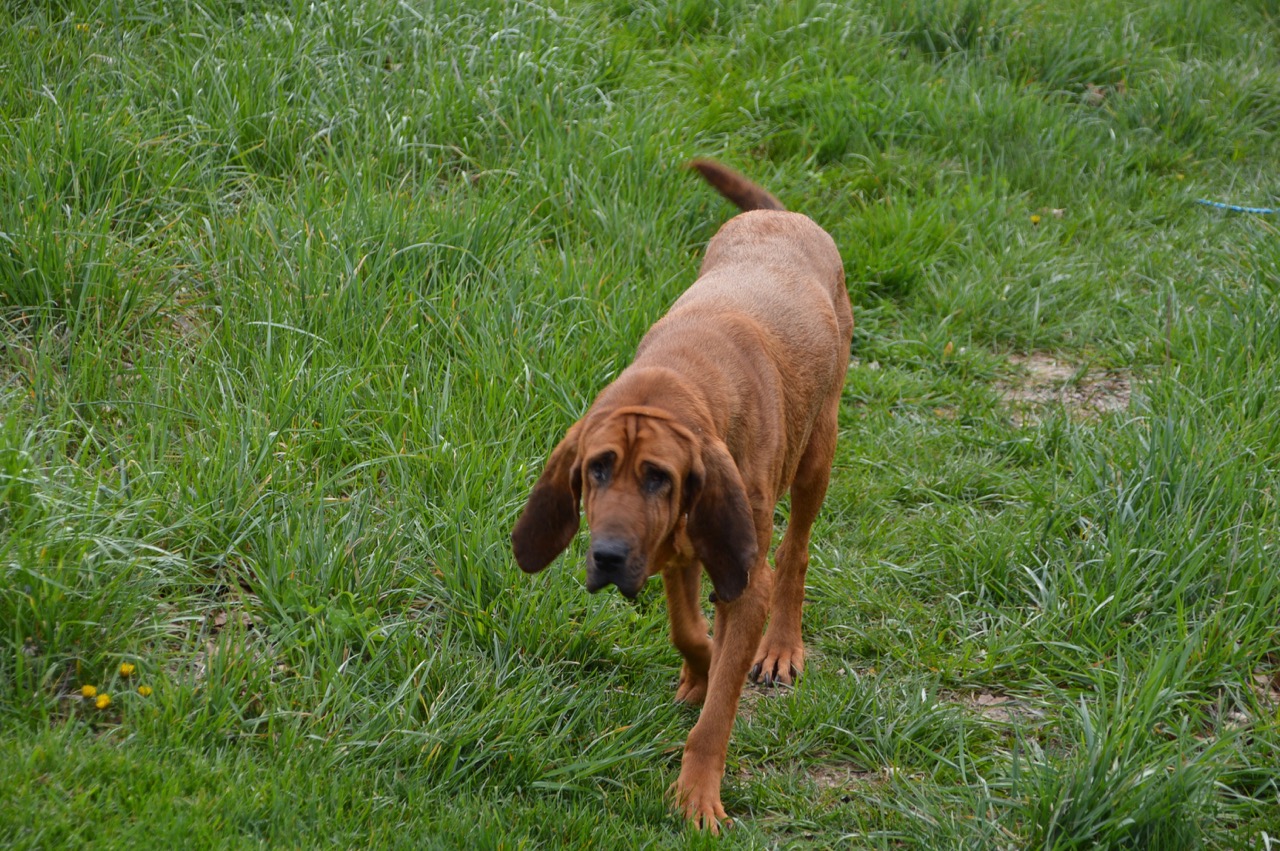 It's almost too quiet today here in 'the tropics' of Southern Indiana.
at April 22, 2018