I Woke The Hounds Up Early 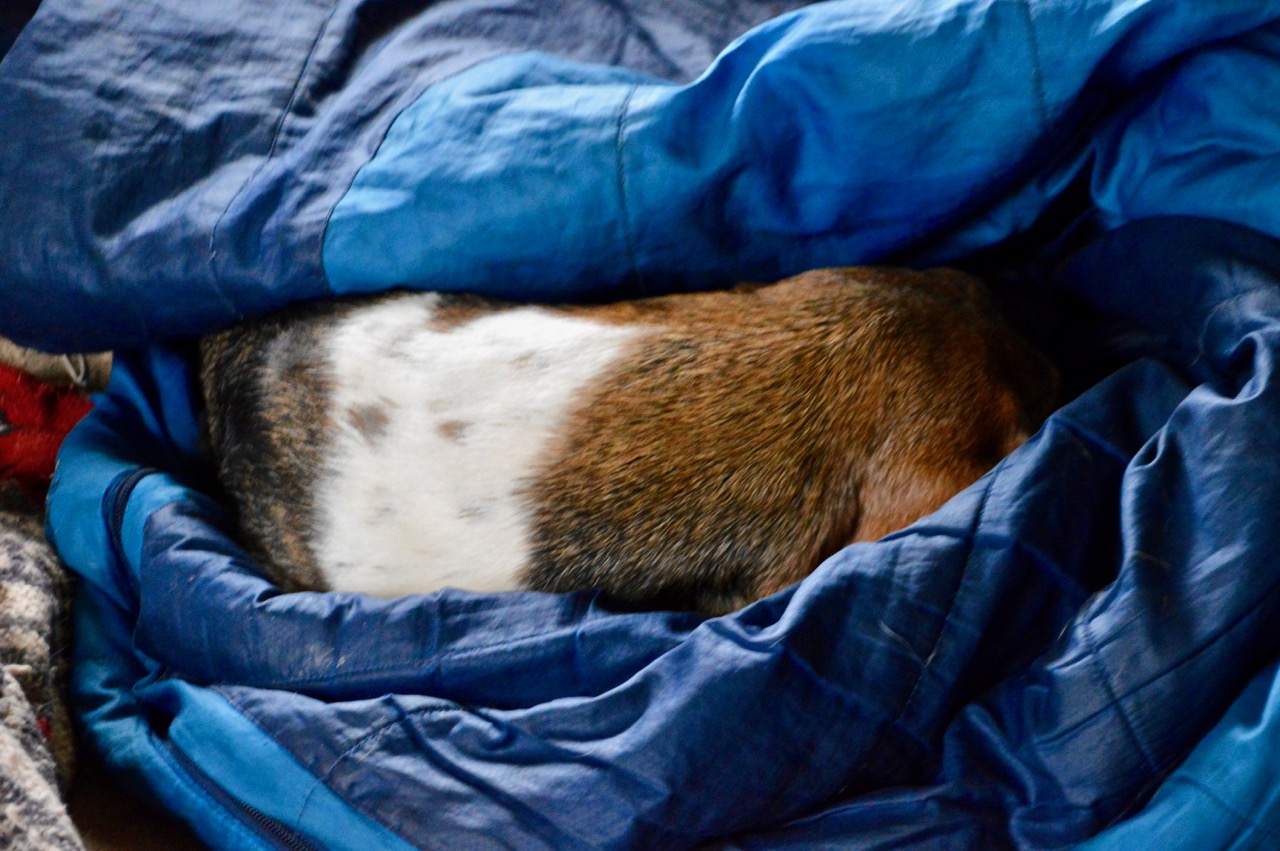 Is this the new norm ? Blogging earlier ? No, the weather, is this the new norm. April is 2/3 of the way over and my iPhone weather tells me it "feels like" 28° as we take our morning walk a few minutes before 8am. The Farmer Almanac last fall predicted this winter, spring and summer to be wetter than normal and so far we have had more rain than normal. It did NOT say anything about "colder than normal" .... but again, after today we have 10 more days of close to normal temperature average ... high 60's. 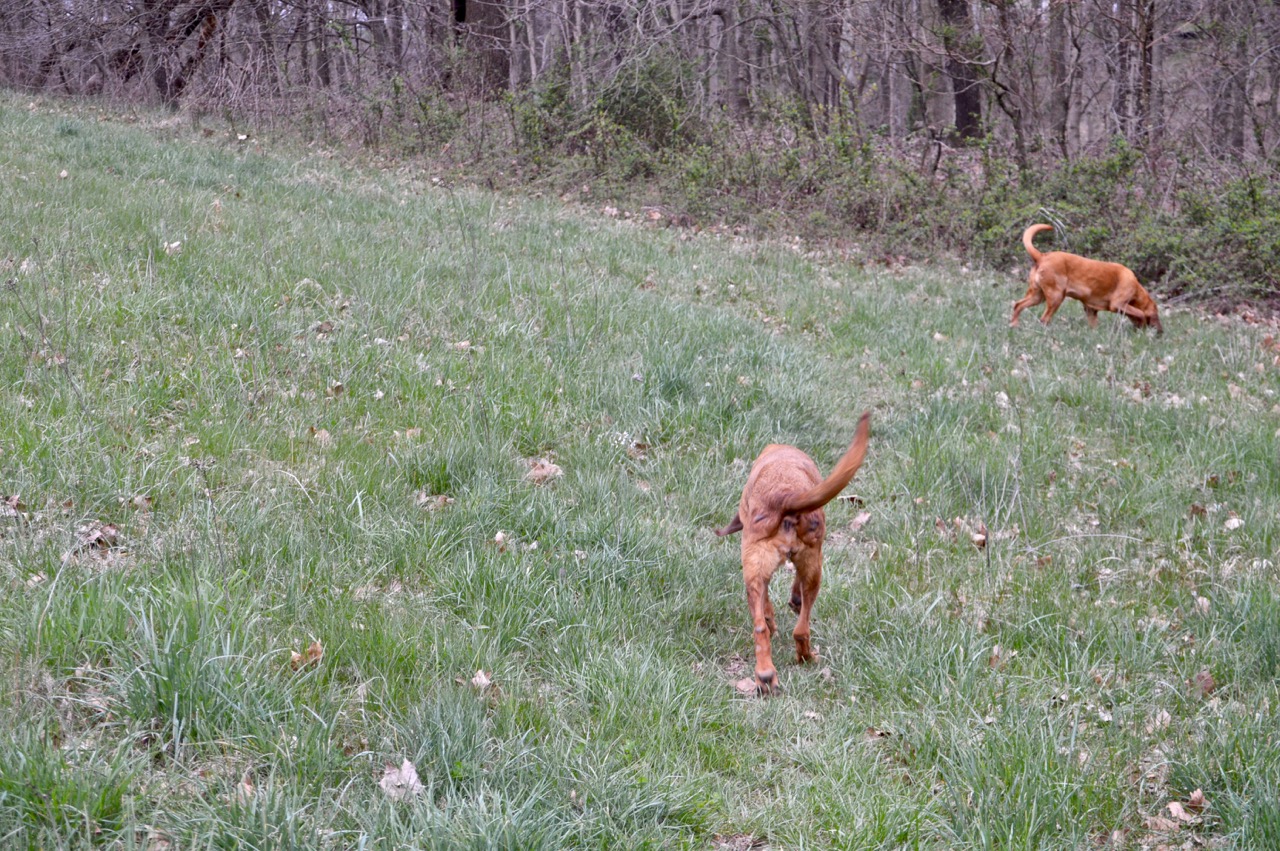 Some have asked about Heidi and the lack of photos. She is well and in fact looks better than ever when she is awake. It's just not 70° every day, which is her threshold to be outside enjoying the weather. If it's overcast then it's questionable if she does anything outside her normal winter routine. She does get outside a few times per day and once at night to relieve herself. The bloodhounds have never cared about weather ... they just want to walk unless they feel rain on their backs. 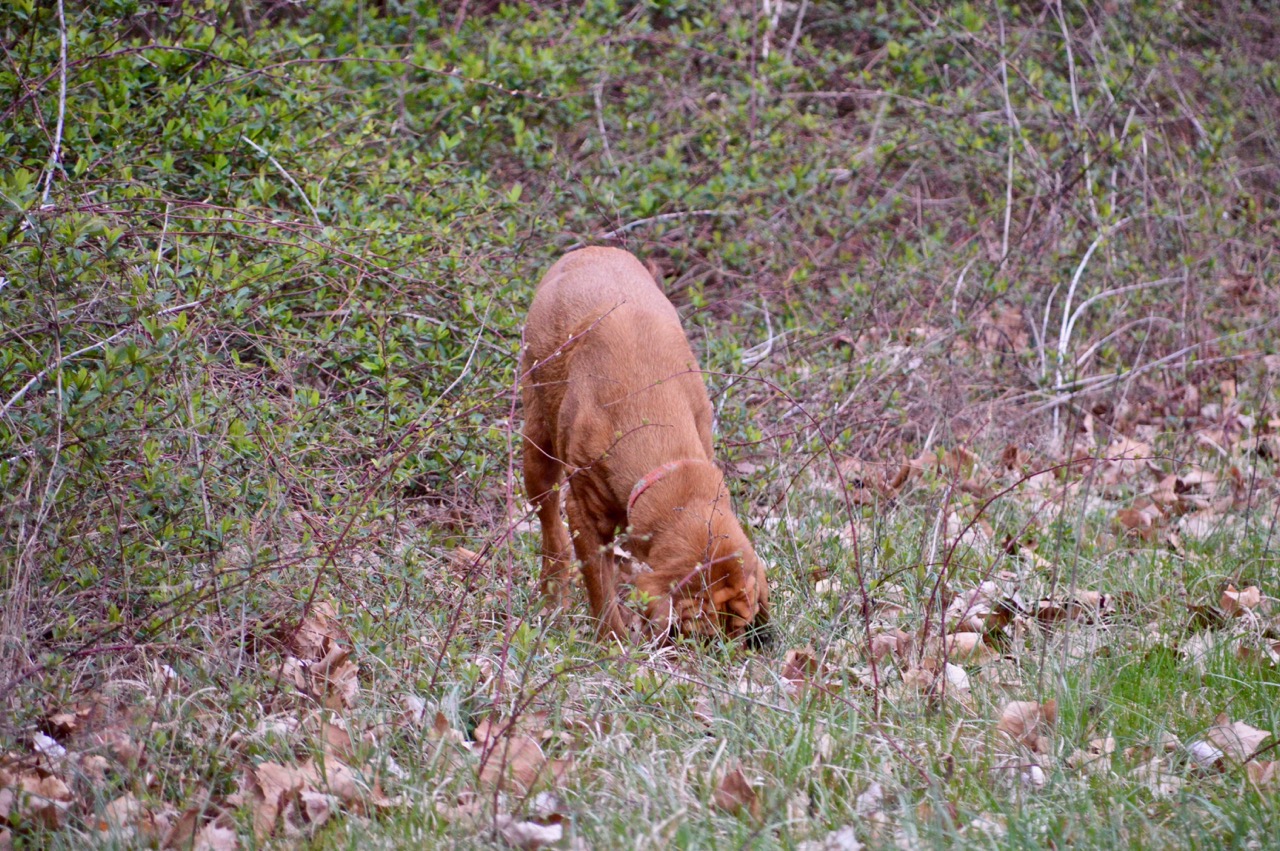 The only thing different today was we started our walk about an hour earlier than normal because I woke the hounds up about 2 hours before they normally wake me up. That is what happens when you fall asleep a little after 7pm and get 10-11 hours of solid sleep for the first time in a very long time ... you wake up earlier. 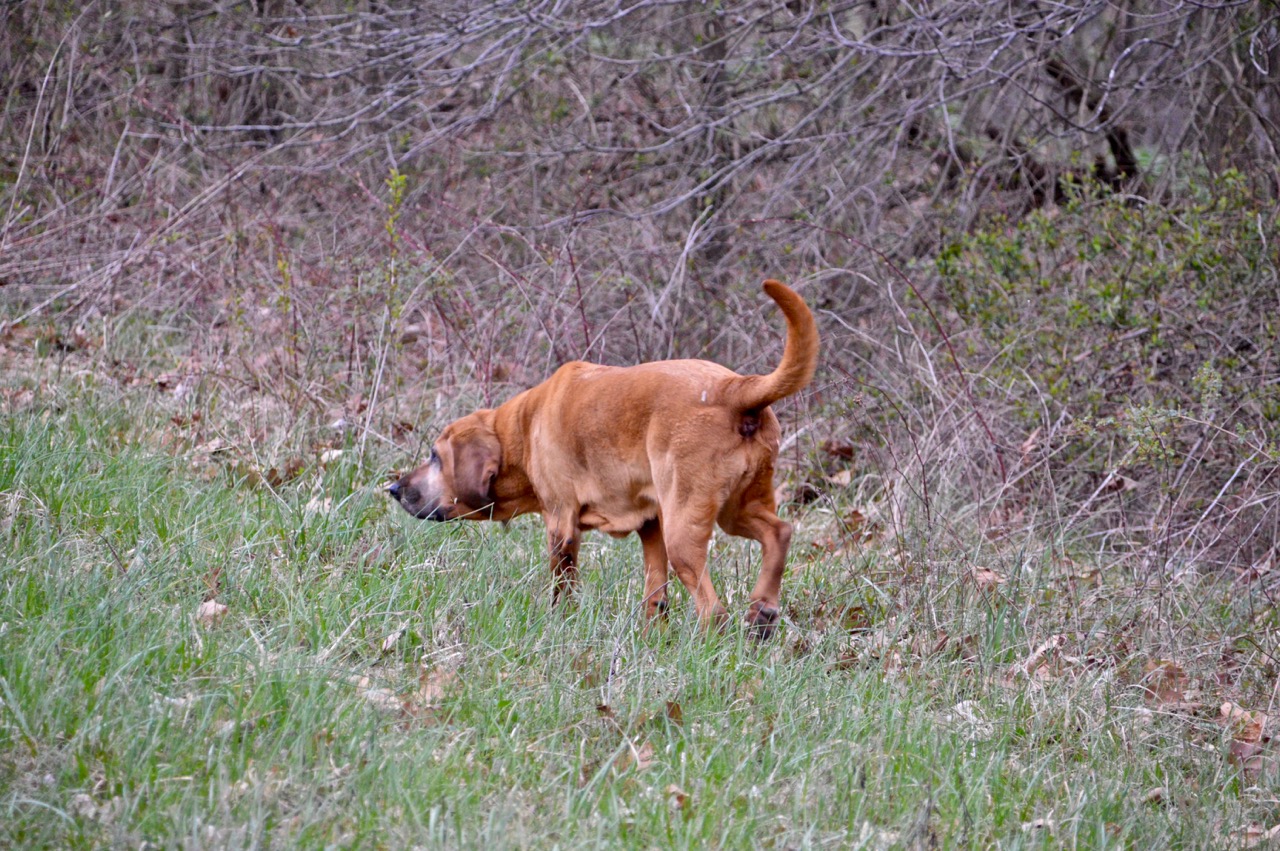 They followed their normal morning routine though, of eating breakfast and all of them going back to sleep while I drink coffee and read the internet. Sadie then sits at my computer room doorway letting me know when it's time to walk. 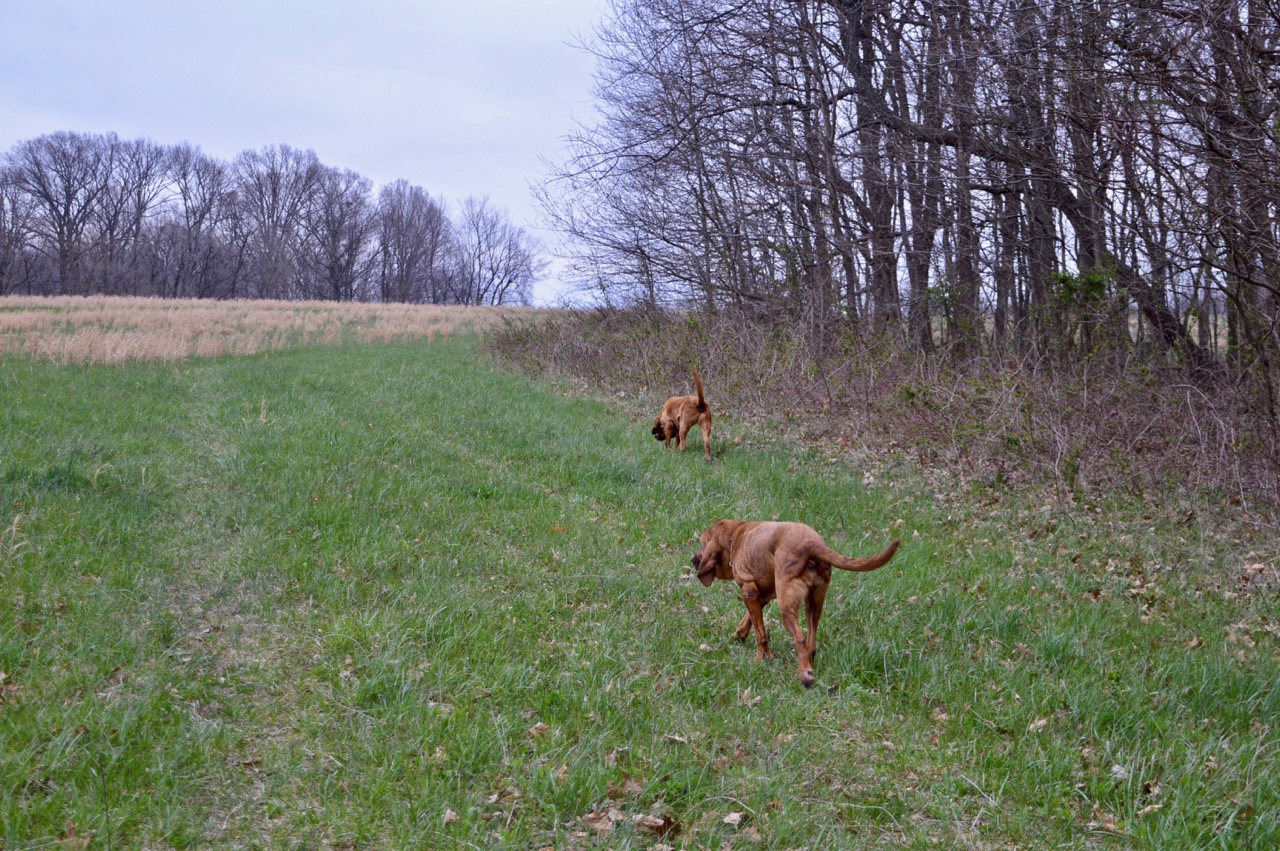 I must say that I feel so much better than I did 24 hours ago. I will never eat another frozen pizza again ... ever. With my new reader called Flipboard, where you can join for free and then pick the subjects you want to follow, I read an article where they had rated all the frozen pizzas and even claimed they tasted as good as a carry out or one that you would eat at the restaurant. My curiosity got the best of me ... I had to try their highly recommended one.

To protect myself from a lawsuit I will keep the pizza I had nameless. All I know sometime around 3:30am after I had the pizza for dinner, I thought I was going to die. I didn't feel much better until right before we took the only walk of the day yesterday around 2pm. Yet this morning I feel great. 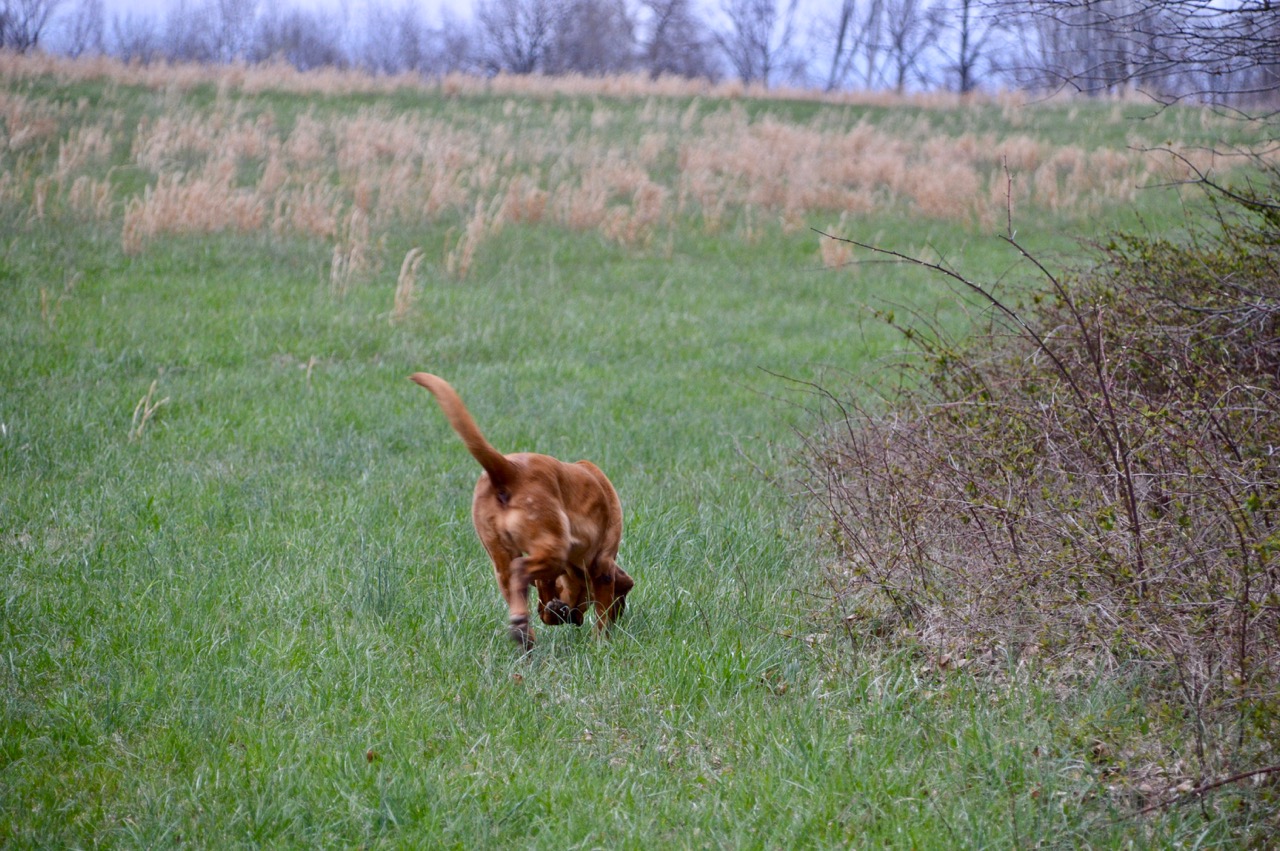 Stella had a bounce to her step again this morning and trotted a little faster than her normal pace to catch up with Sadie. No verbal herding was needed this morning as she was on her own. She made the complete walk with a lot of tracking instead of eating. Maybe spring really is right around the corner. This is Sadie leading the way. 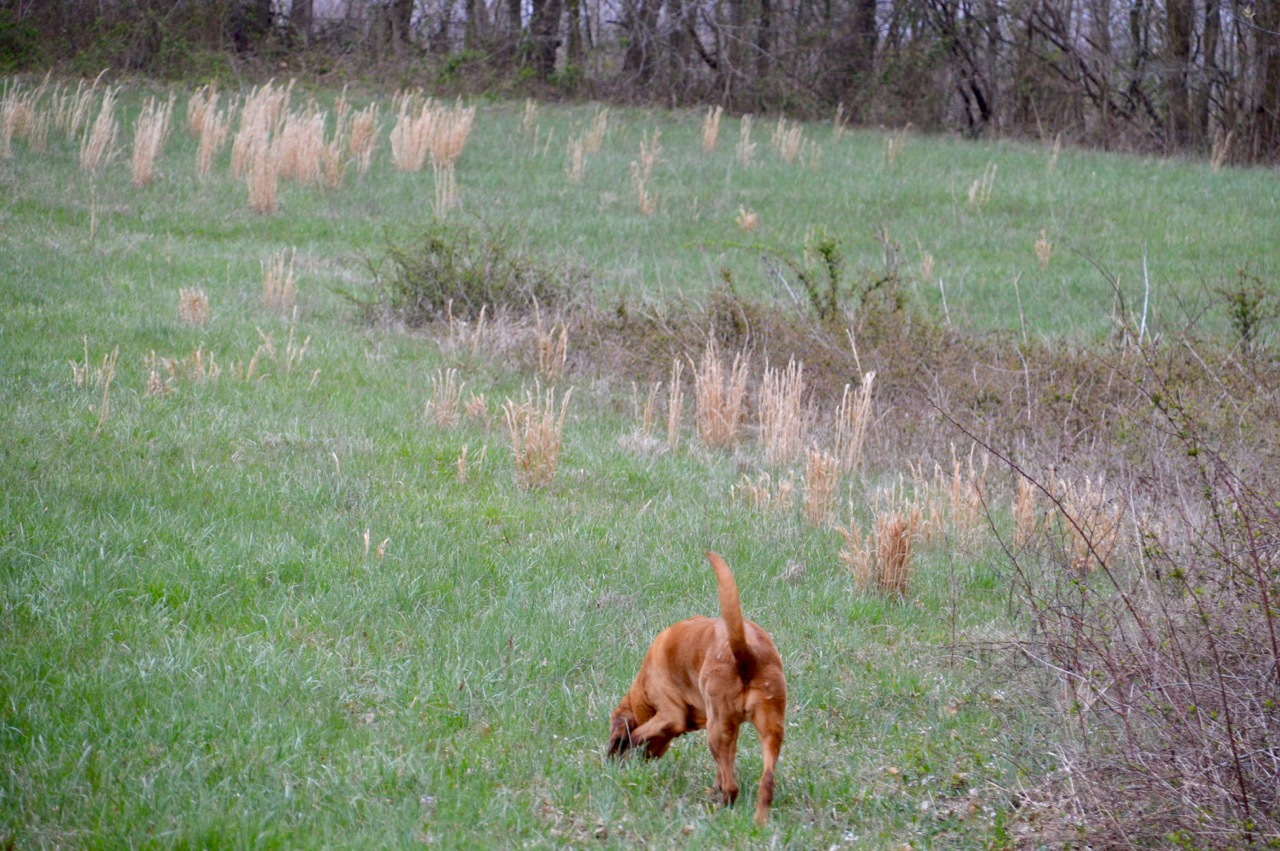 For some reason I had a hard time keeping Stella in focus even while hearing the camera beep telling me it was in focus. 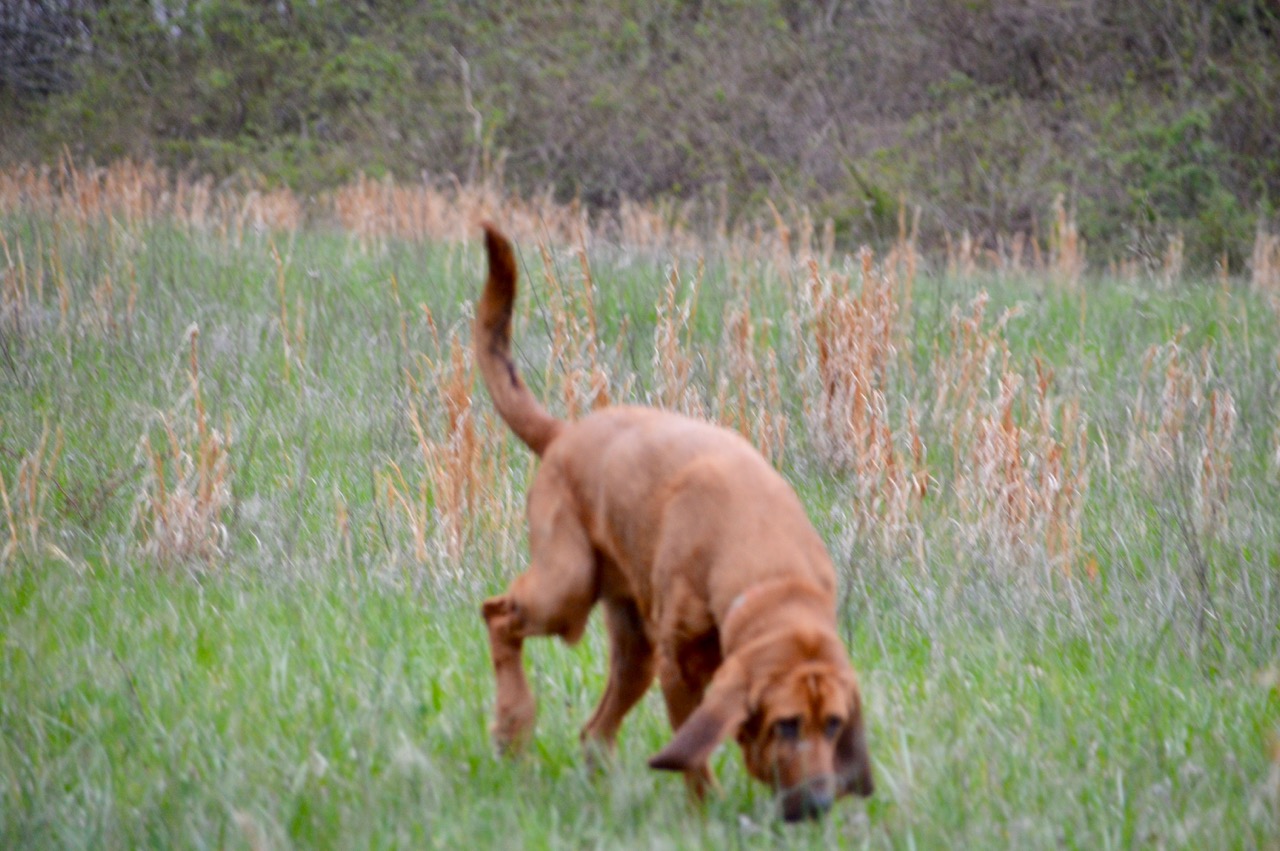 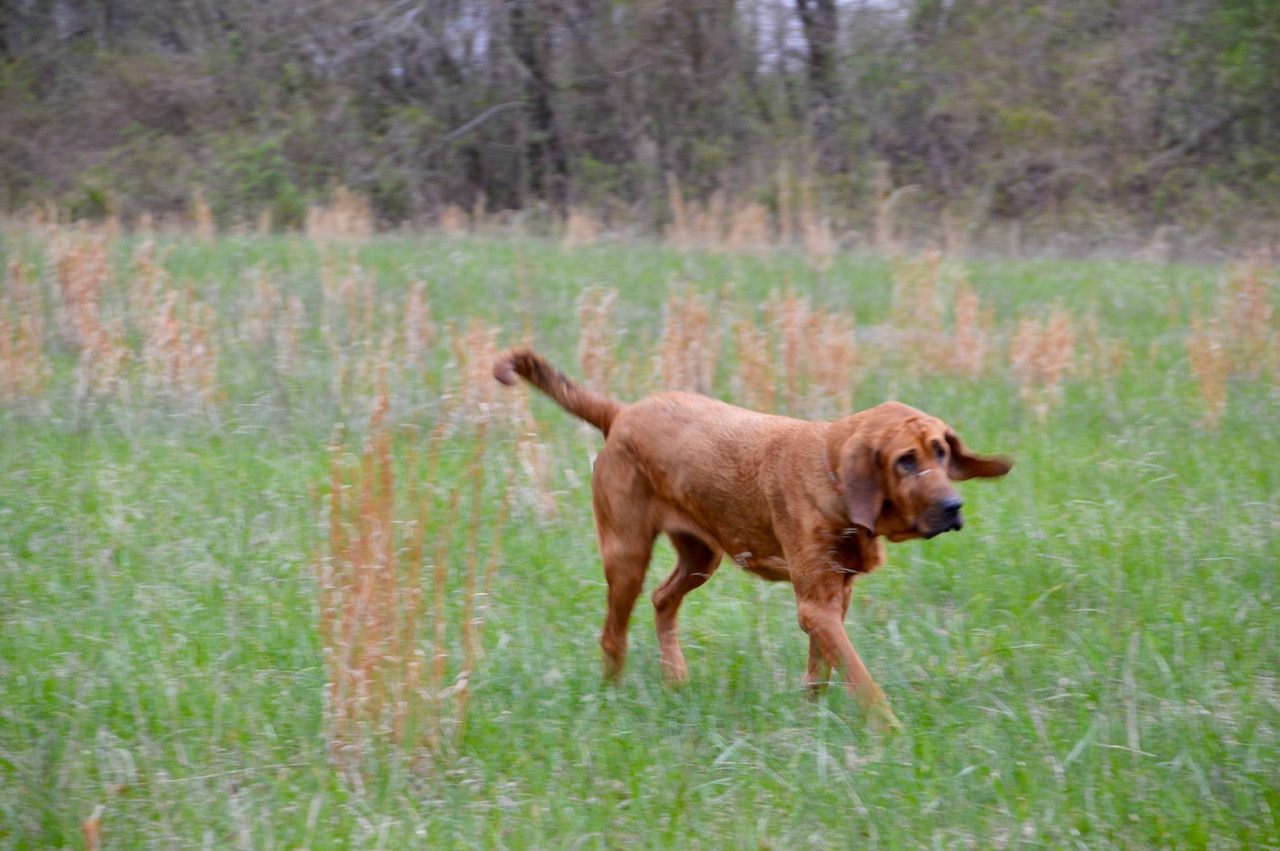 Luckily no wind to make it feel colder. I was wearing layered jackets, wool ski cap and gloves again and was more than warm. I guess it is a good thing I took the 30 minutes yesterday afternoon to mow the parts of the yard that needed it. I am mowing it higher again so the root system can develop in advance of the hot summer months. 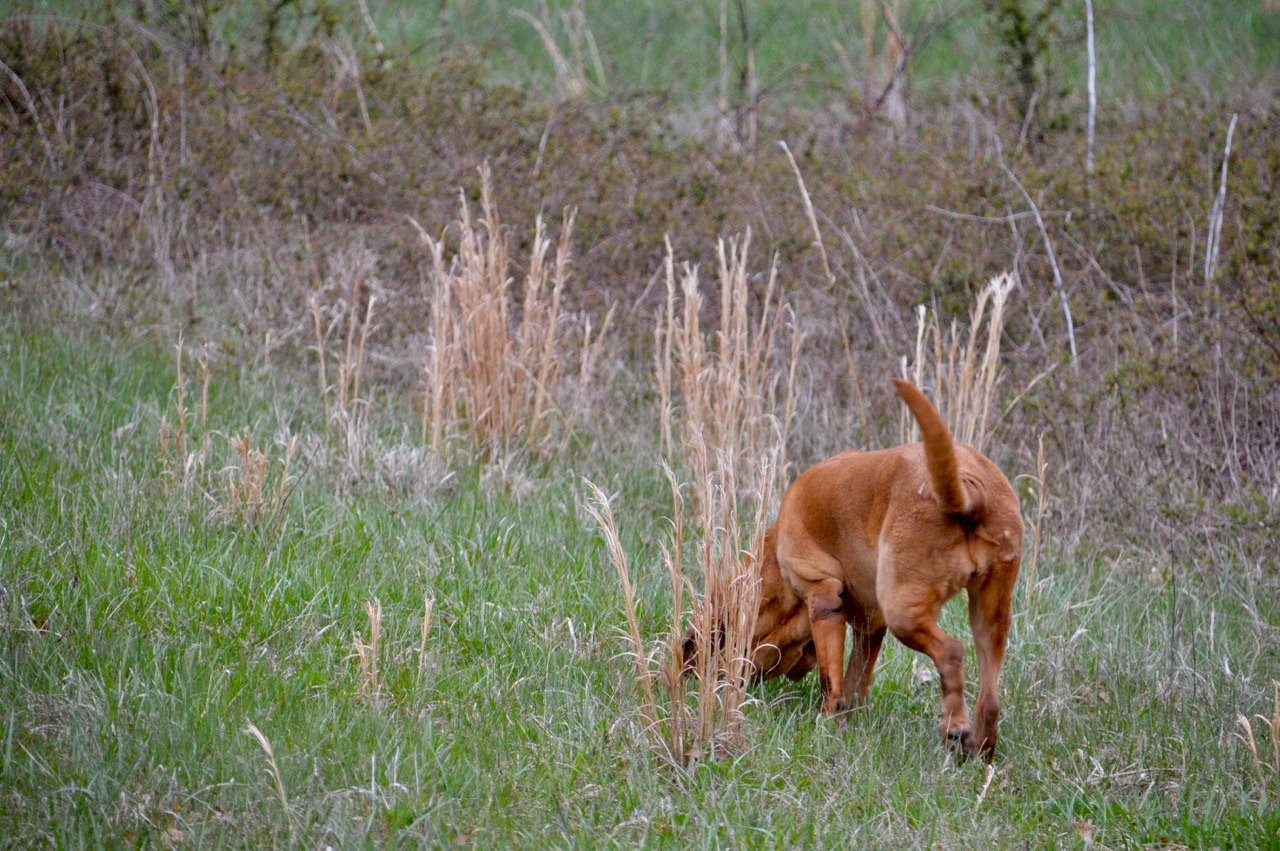 Stella decided it was time to catch up just after we passed the first corner. Sadie was way up ahead waiting for her. 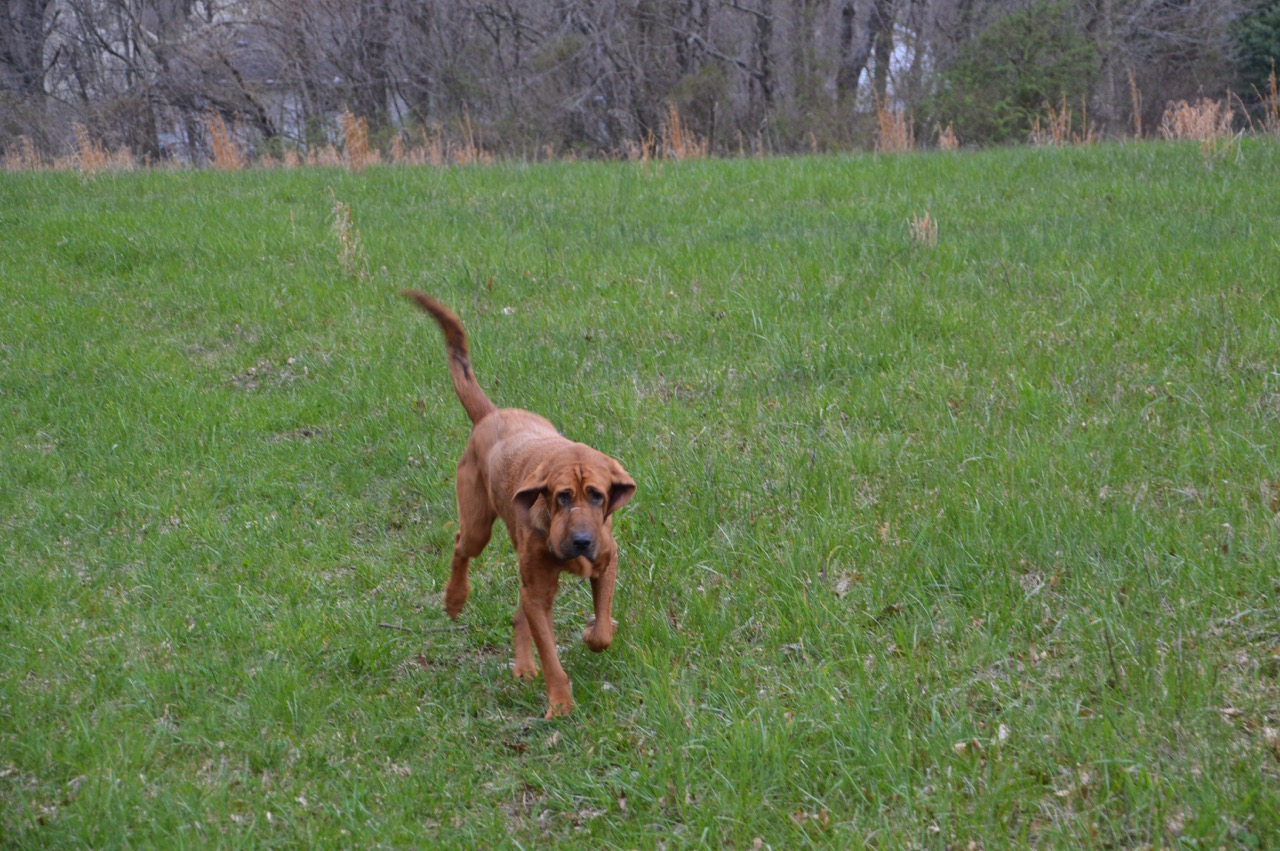 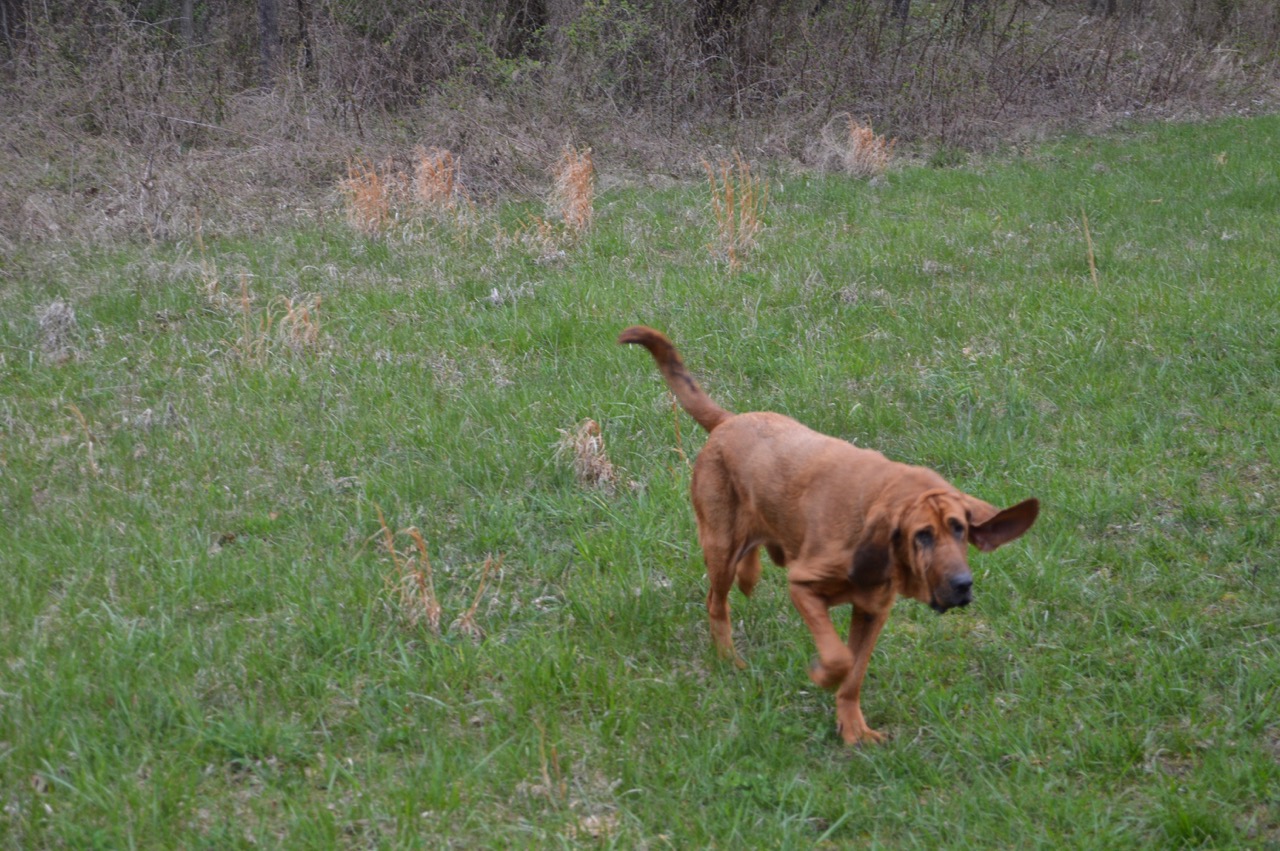 After she tapped Stella's nose with hers, they both took off for the back of the field to track the deer path. 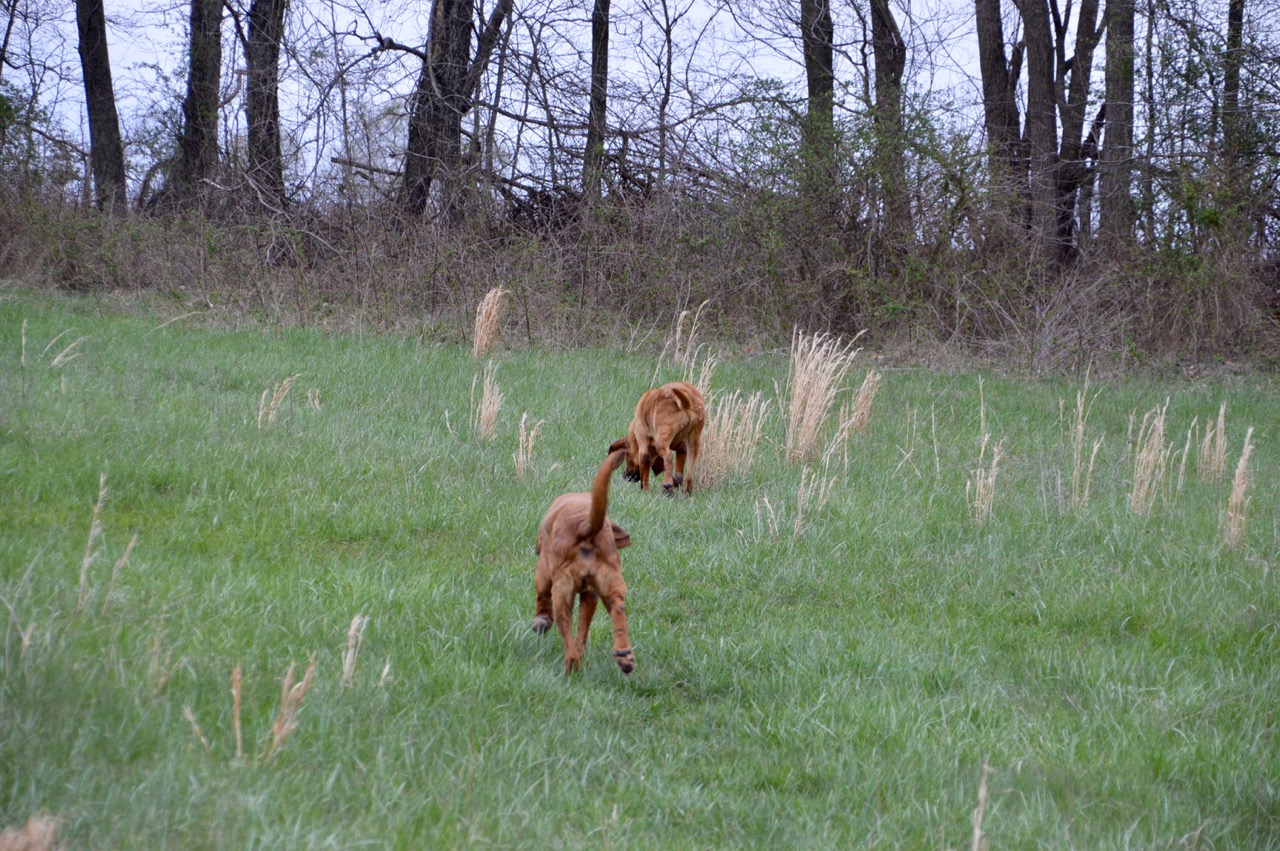 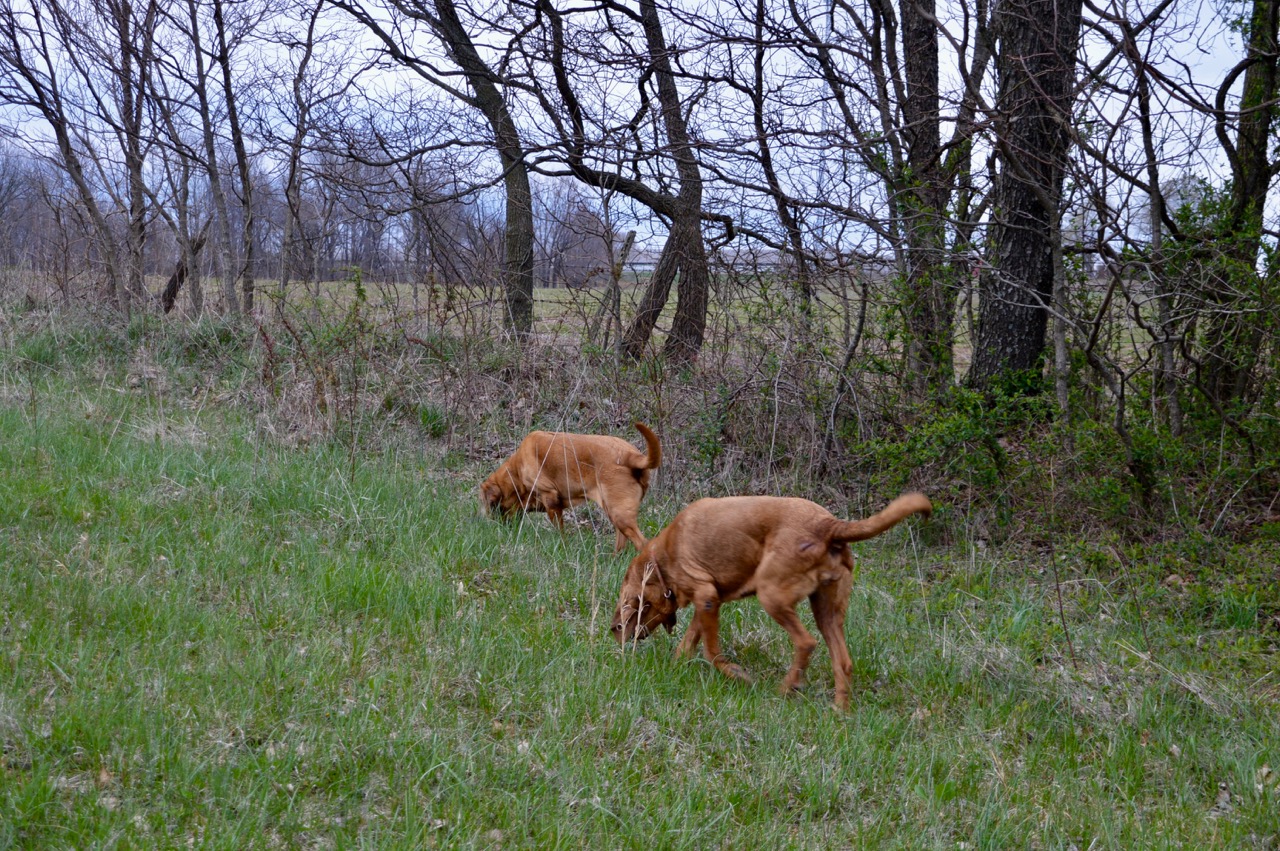 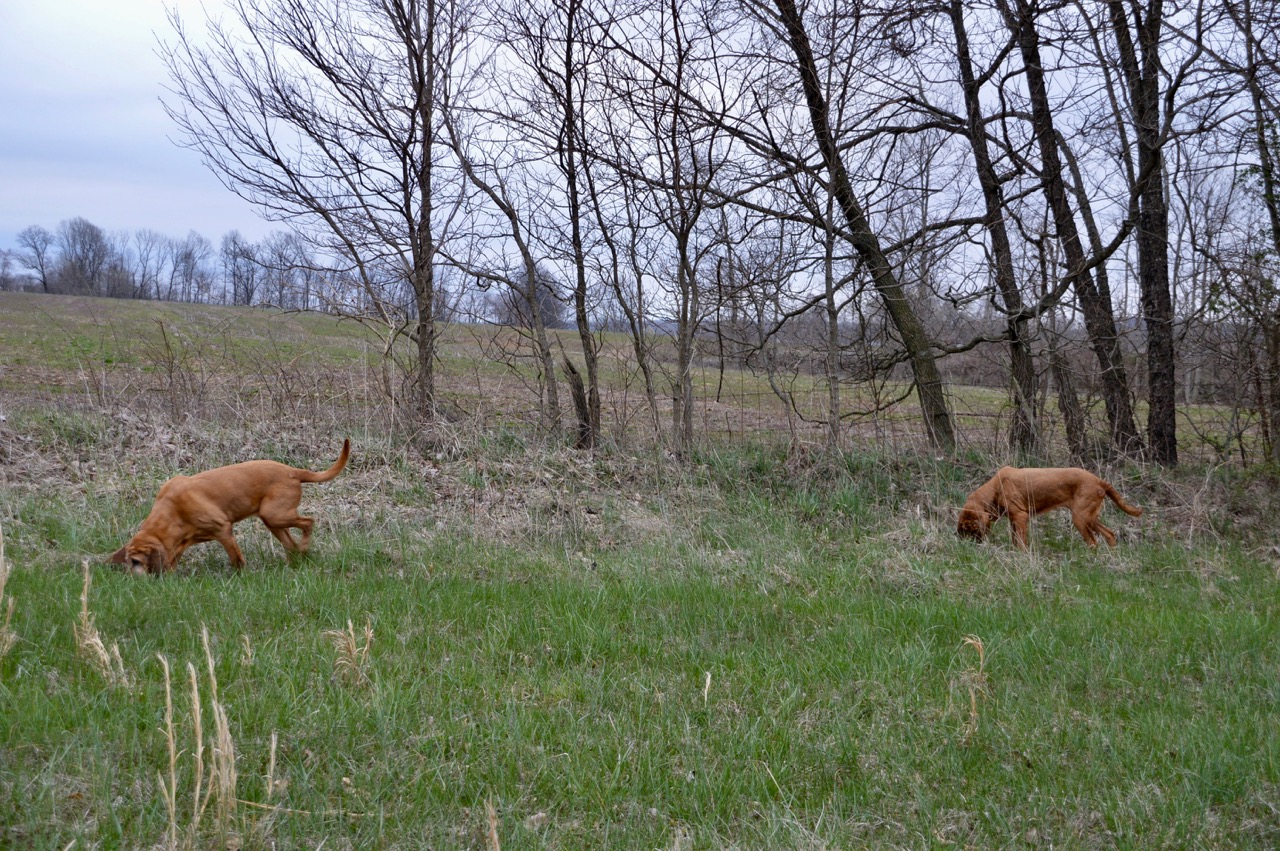 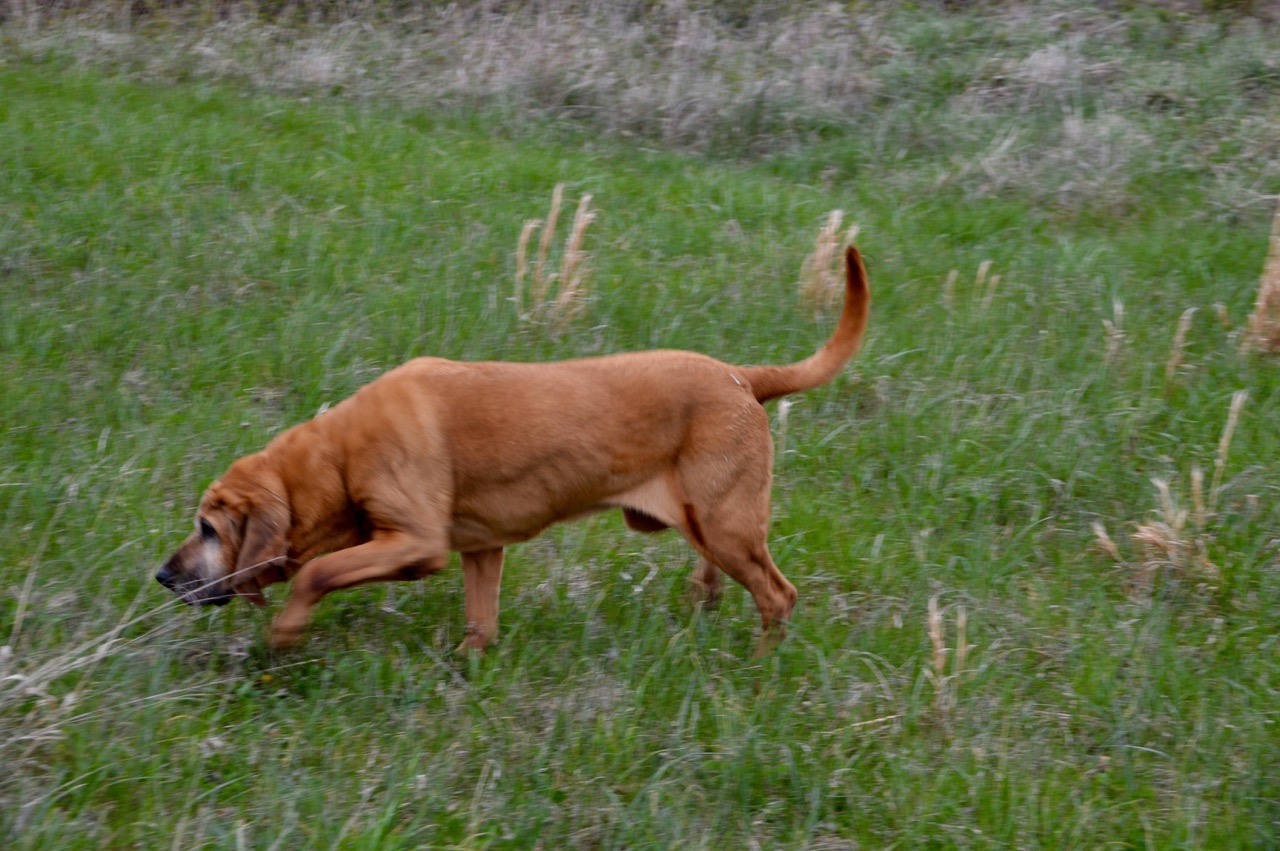 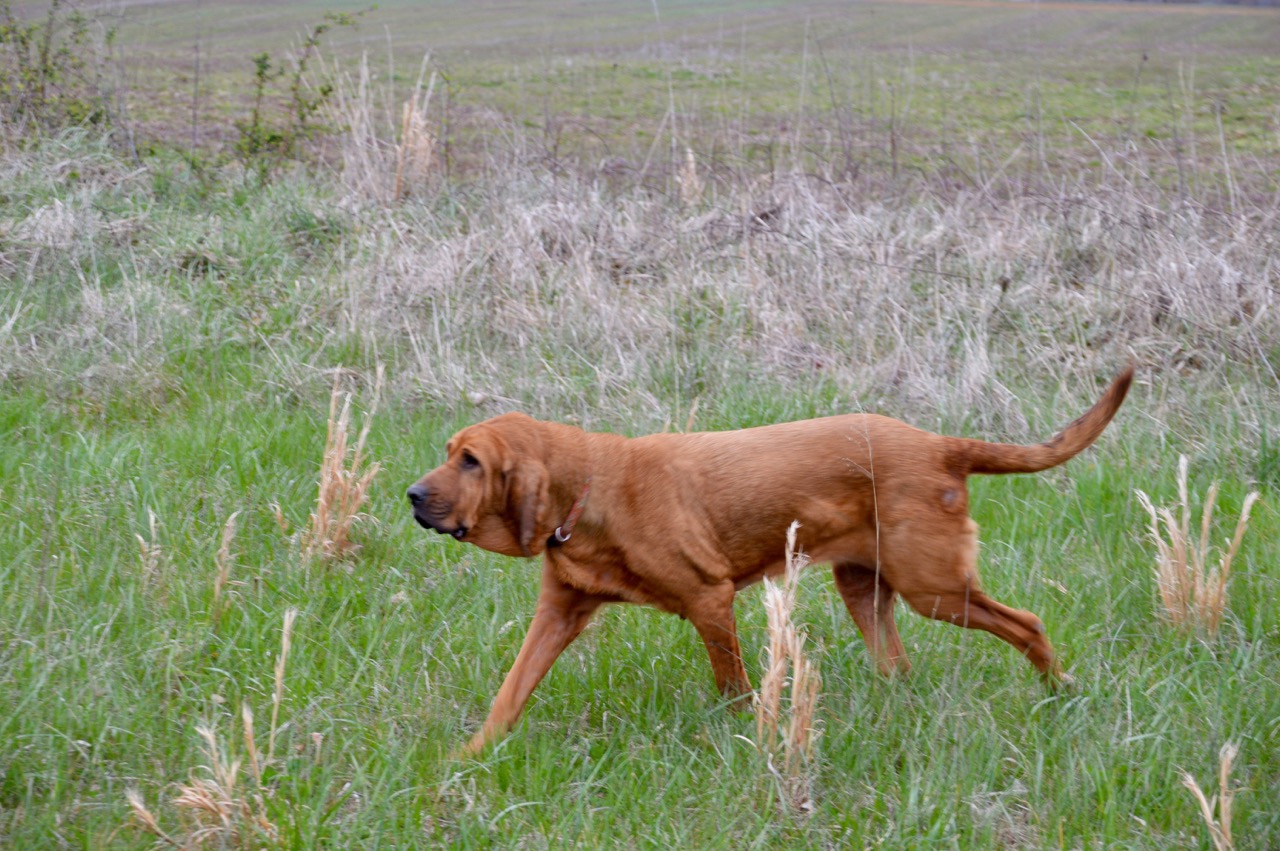 As I made the final turn home I always tell them "let's go home" and they will run past me from the back of the field and choose one of the two different paths we take home. 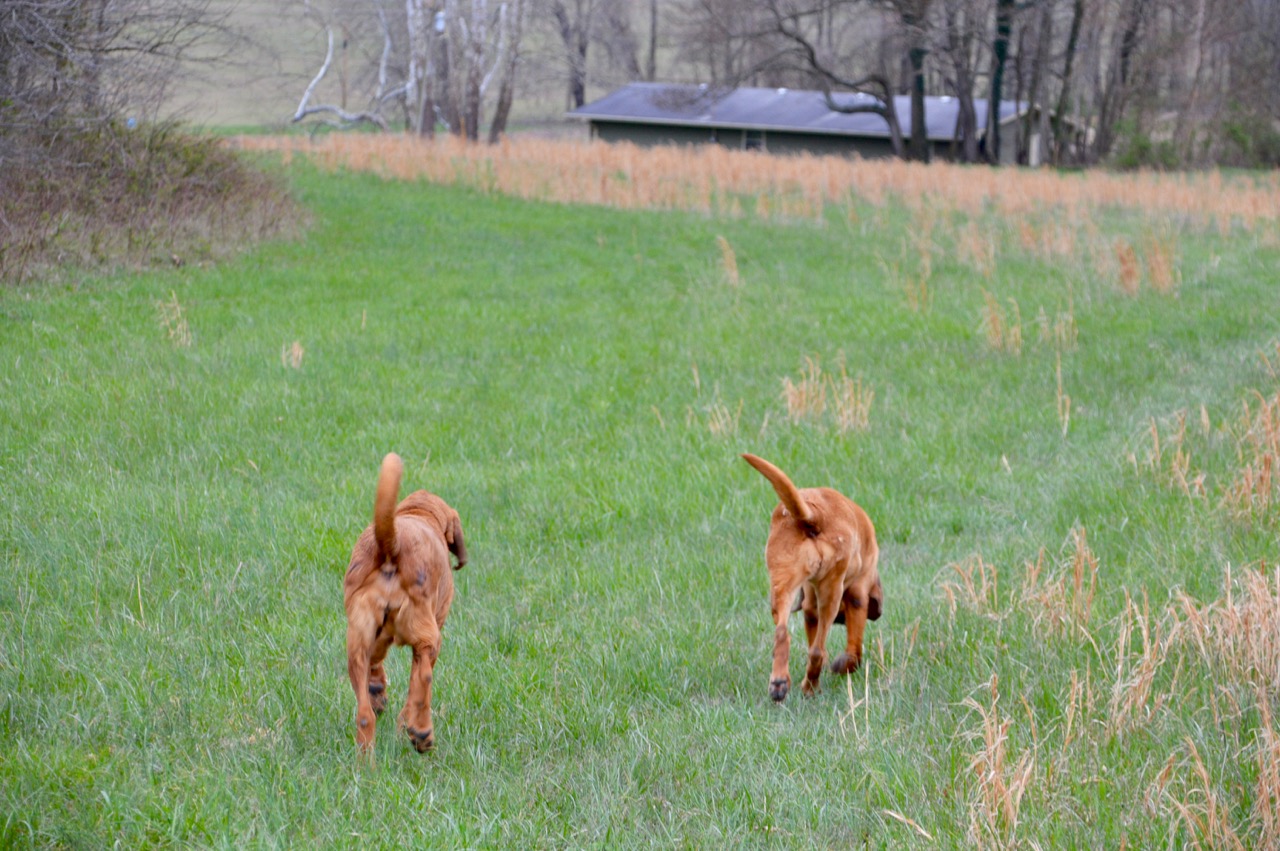 You can see the portion of the backyard that I have mowed twice this year. This back half of the field toward the north has not grown enough to mow. In fact some of the wild flowers from years past when it was like the field and overgrown, are sprouting up.

The difference is, one half of the yard has had winter hound fertilizer and the other half has not. 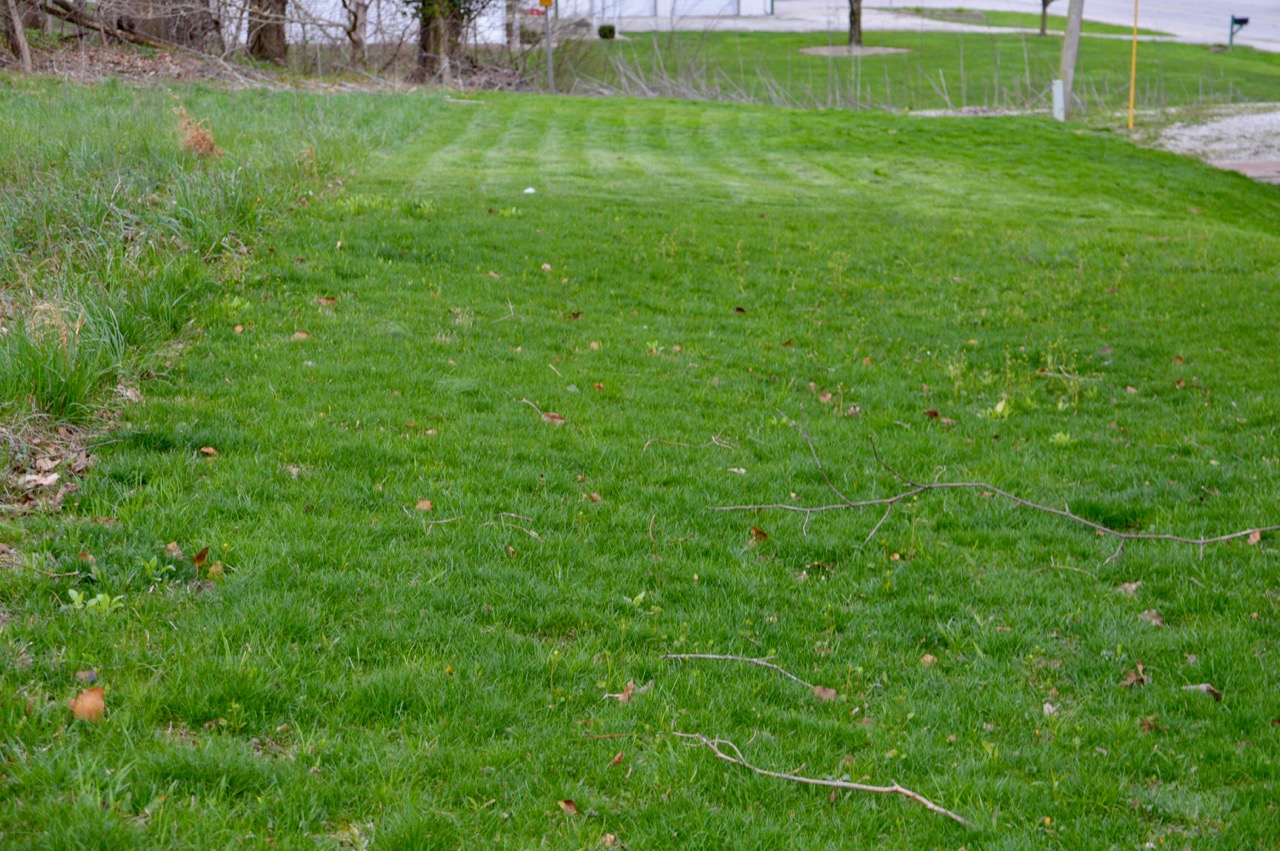 Their tracking changes from the deer path to the path of the field cat that is rarely seen. 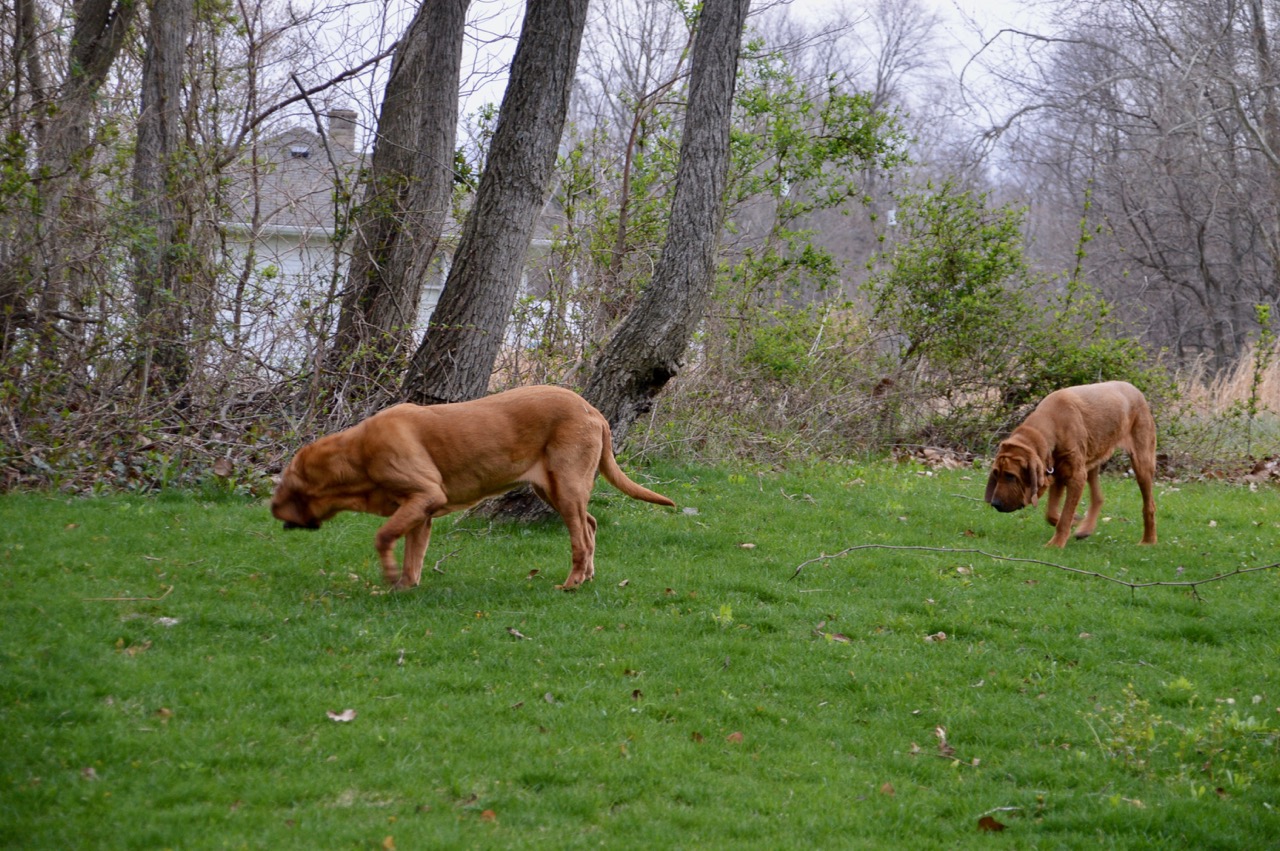 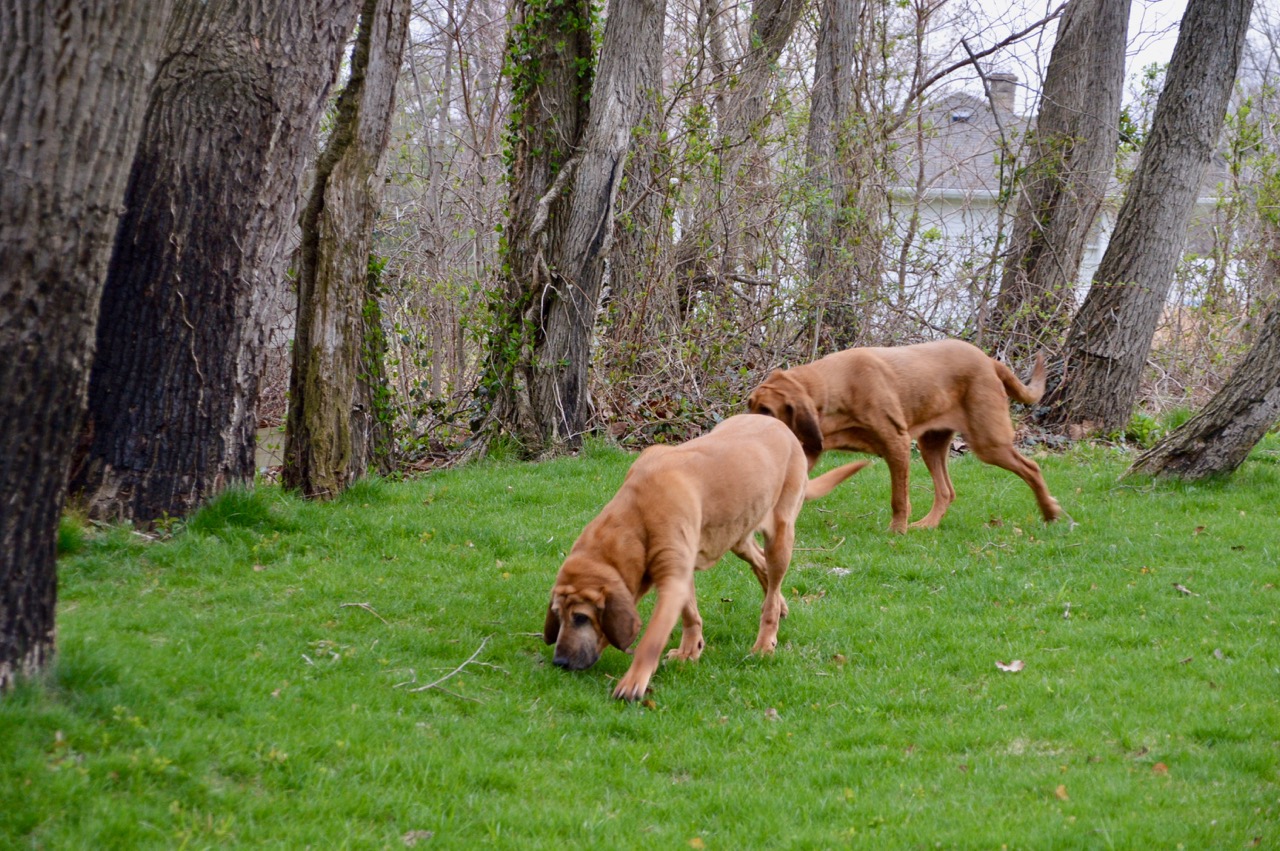 Then it's back inside for a mid-morning nap until lunch and afternoon walk. BTW, Heidi has not moved from that first photo and it's been almost an hour since that photo was taken. 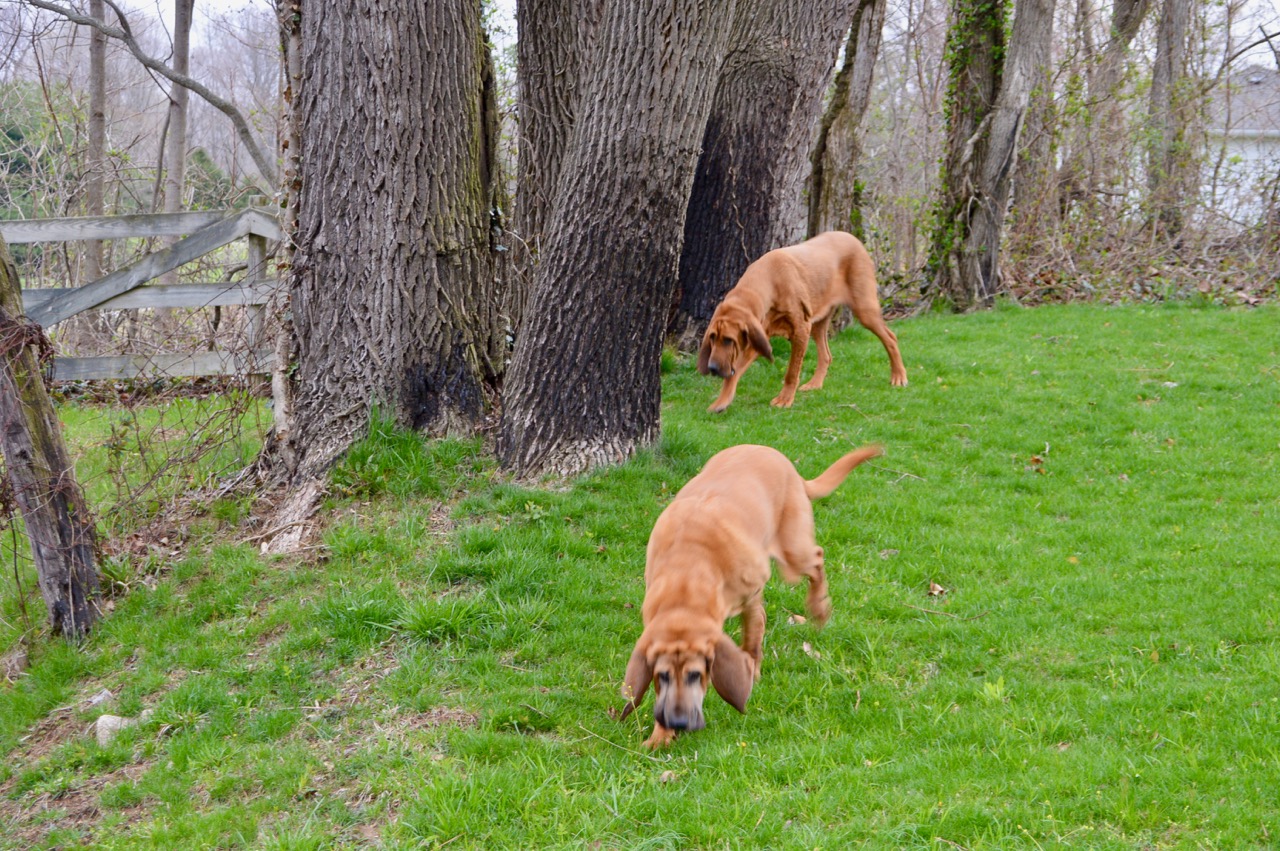 My Bob Vila newsletter this morning listed some annuals and perennials that will do well year after year just by dropping their seeds onto the ground. That is what I am going to do to the bank around the old fence post and the bank along the driveway. Here are the ones he listed. I hope I can find these seeds at the local landscaping place within view of the house.

Nothing planned today except to enjoy another day of retirement. That never gets old, no matter what happens. Freedom each day and good health are worth more than anything.

A cool morning here in 'the tropics' of Southern Indiana.