Heidi Surprises All Of Us 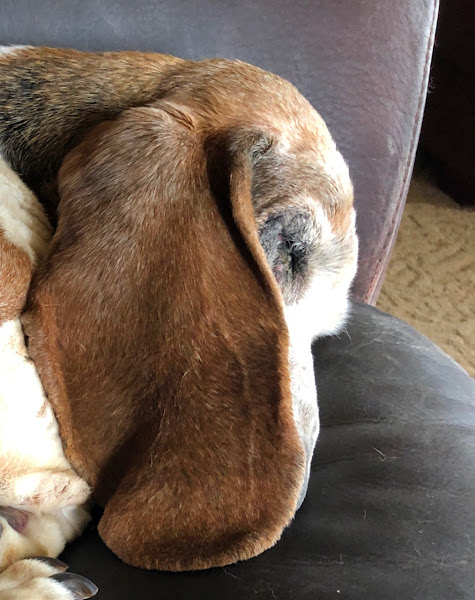 It was a great afternoon with the windows open, the hounds sleeping next to me on the couch while I started a couple of new books while watching the Reds win their third straight game. We are now a half game in front of the Cubs, who dwell in last place. :) As forecasted, the winds started picking up some steam as the day went on. Nothing major but you can see I have some new tree limbs to start my burn pile scheduled to burn this November 2019. 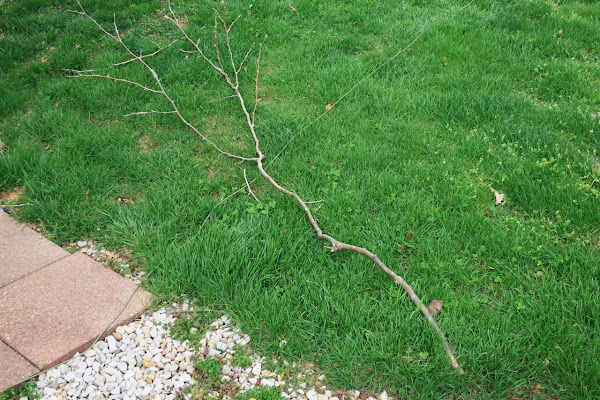 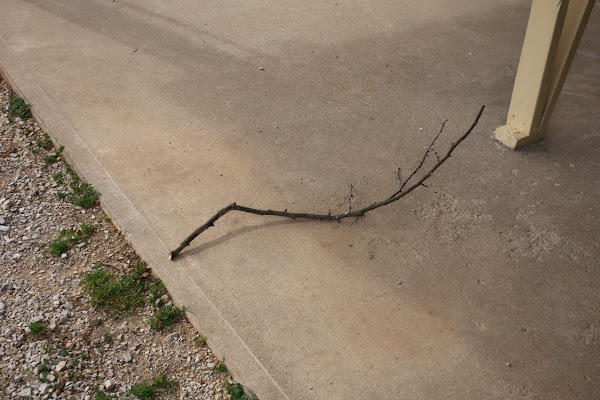 I could barely stand up straight while I took the photo of Stella checking out the strong winds from the SW. I wasn't sure what her plans were but it was past 4pm and I needed to take our second walk of the day. She was probaby smellig those three trucks worth of fertilizer across the highway. I admit the smell has been pretty strong. It's just part of living in a rural area. 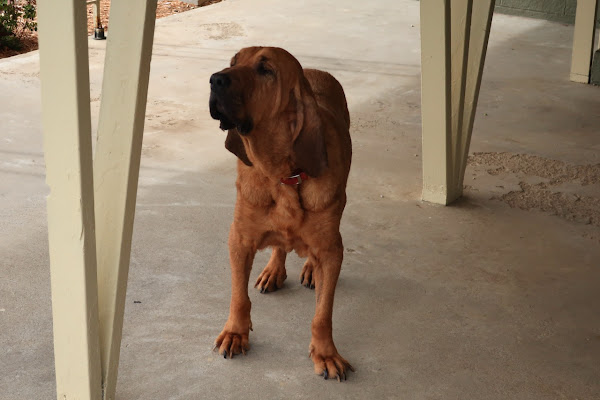 If you would have seen Heidi at 4:15pm you would have thought there was no way she was getting outside this afternoon even with the temperature hitting 81°. She had not moved hardly at all during the ballgame that started at 12:30pm.


When she sat up staring out in front of her with eyes barely open, I asked "do you want to go outside and go for a walk?" ... she didn't bother to even look in my direction. All she did was slowly turning left, changed the side she was sleeping on. I thought the walk was cancelled for sure and went back to reading my book. 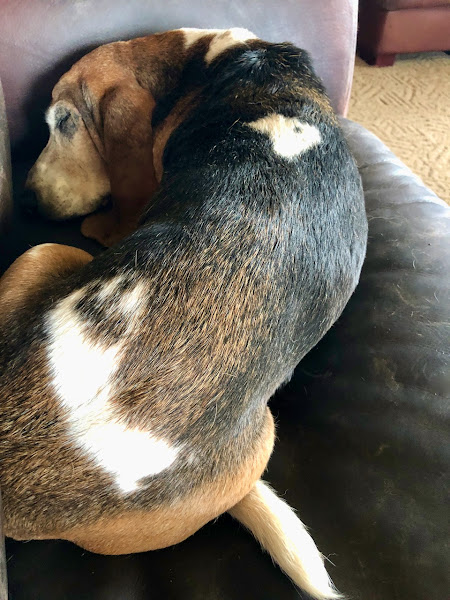 It only takes me getting up off the couch and do anything and I mean anything, in the kitchen ... both hounds will always wake from a deep sleep and come running. After all, the only reason I would be in the kitchen would be to get some food FOR THEM ... wouldn't it?

So they both let me know they were ready to head outside when I asked them. Heidi marched across the carport floor as if she had plans leading us on the walk today. That one large limb stopped her in her tracks, where she had to think not only how to get over or around it (she's not a problem solver), or even if a walk was possible. 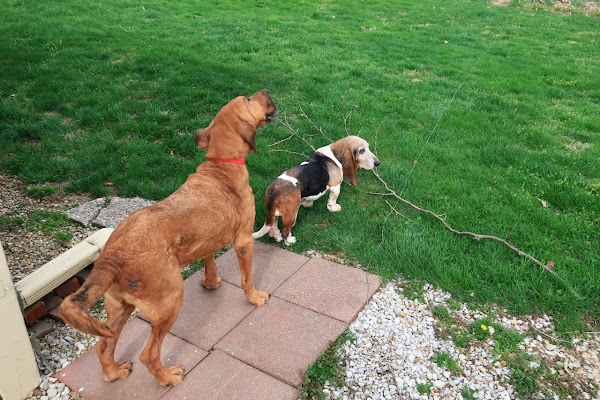 I was about 10' in the field asking her or telling  her to "come on" .... she slowly turned just like she did on the couch and sat down. She would enjoy the temps while Stella and I were gone but she wasn't in the mood to walk the half mile ... even at her pace. 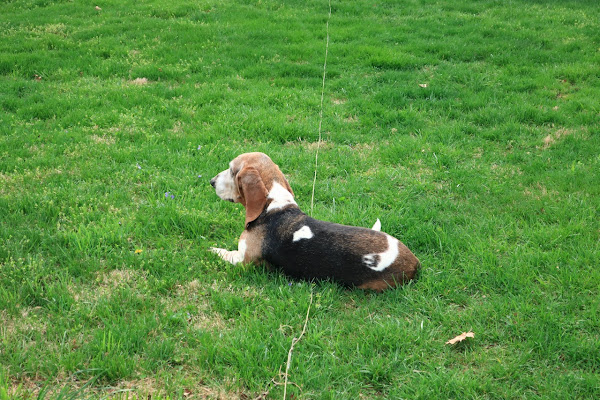 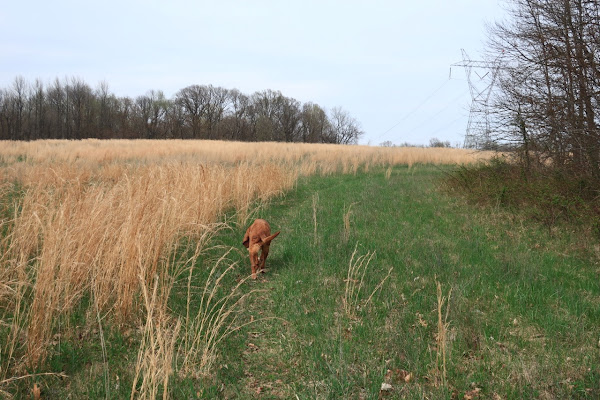 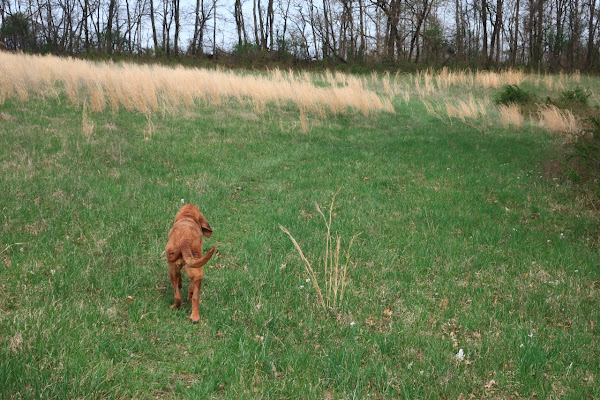 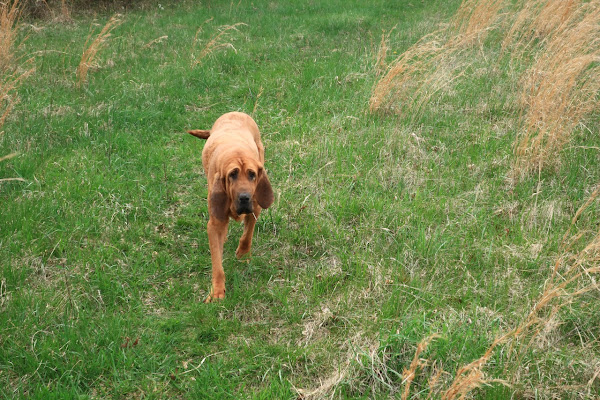 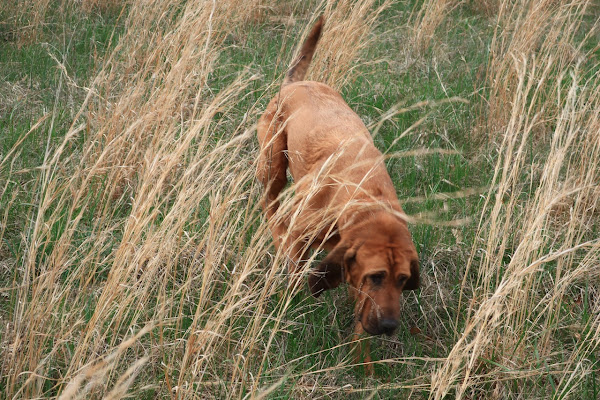 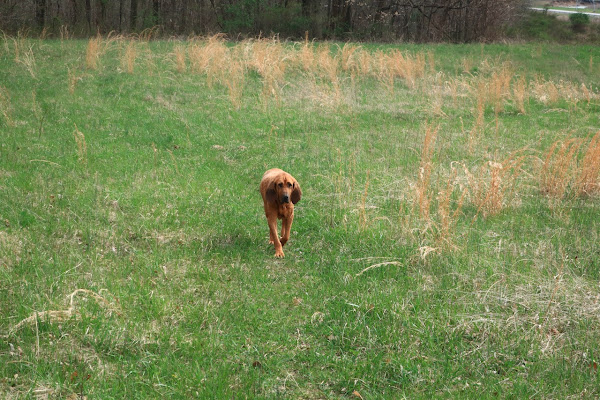 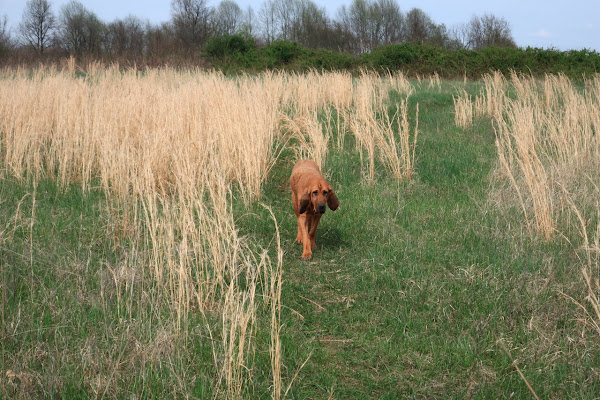 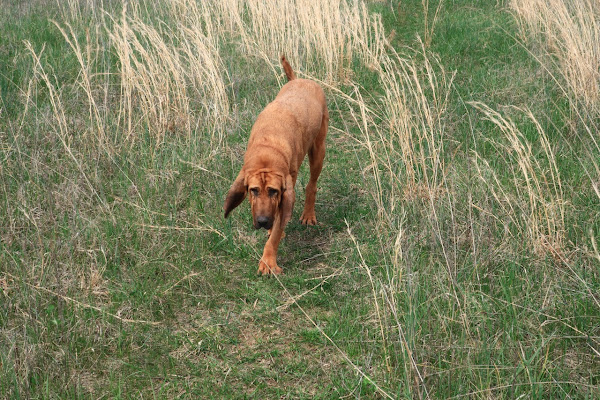 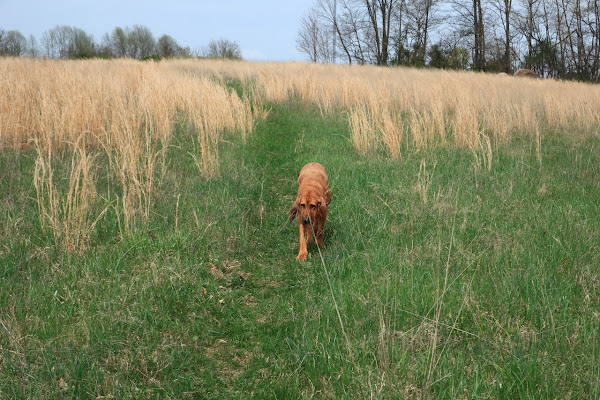 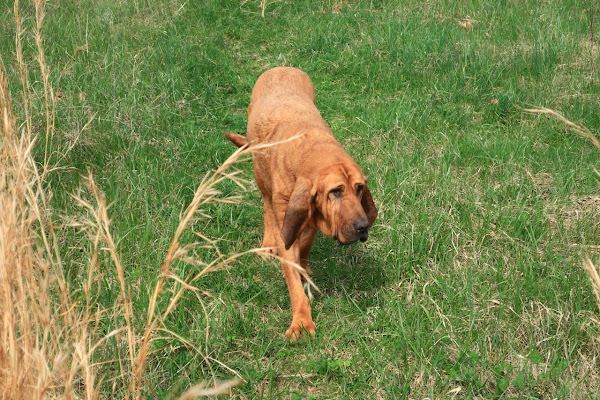 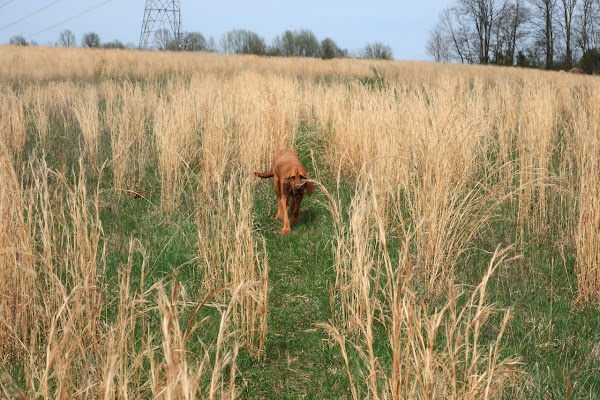 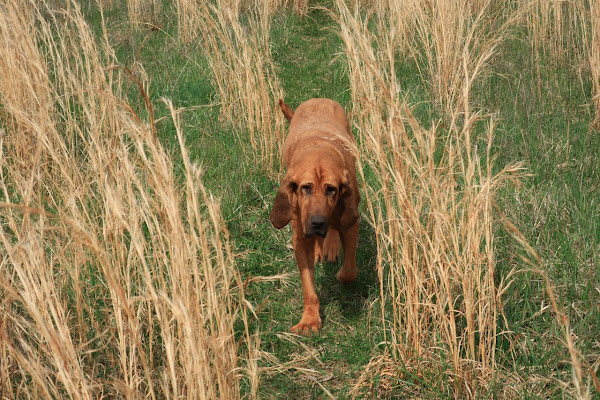 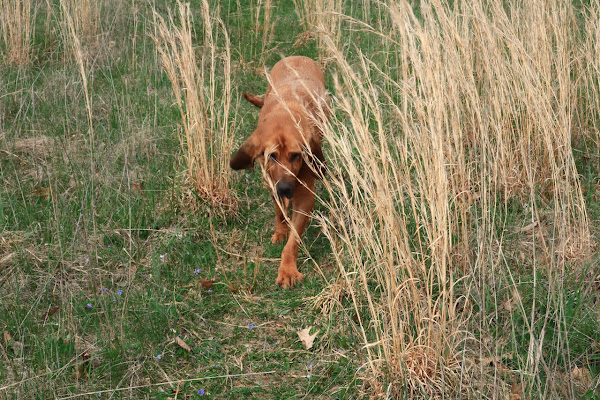 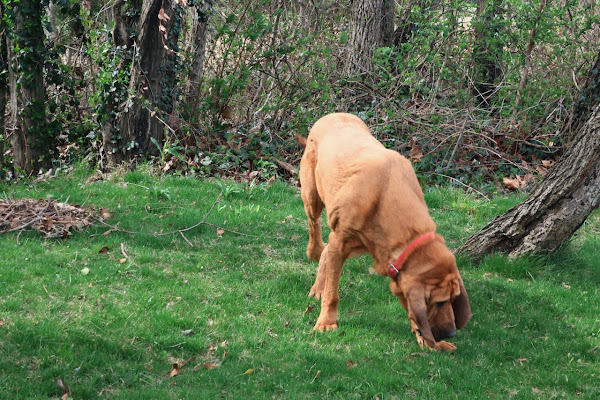 She will usually trot out toward me and Stella to welcome us back but with all the new grass, weeds and wild flowers growing in the yard she had a few places she needed her nose to check out. 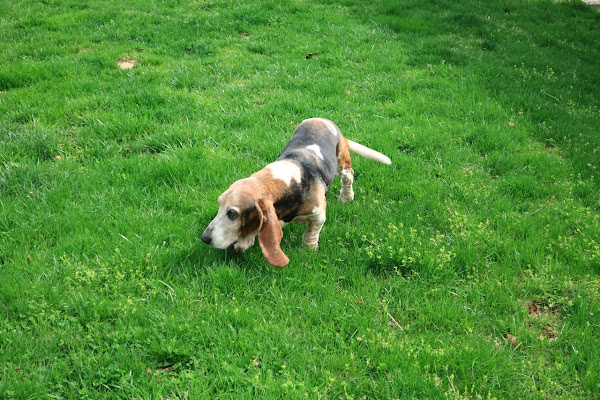 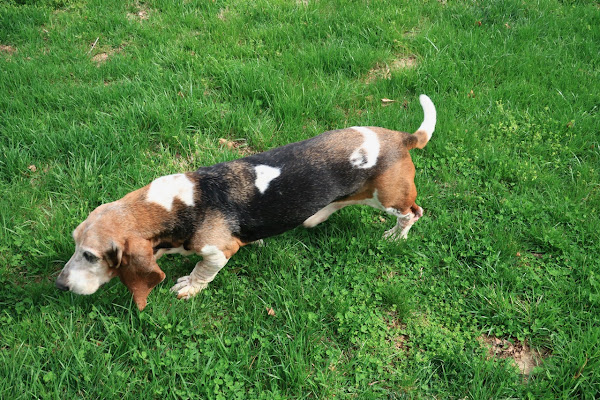 Stella was claiming no guilt to the new strip of dried bloodhound drool that my newly washed car caught sometime in the past 24 hours. It was the type of drool that flies through the air when she shakes her head. 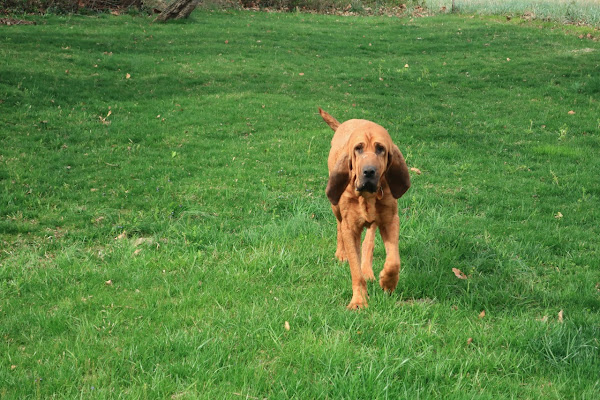 I guess it is better to see it on the rear corner of the car instead of spread out on my 55" tv screen.  :) 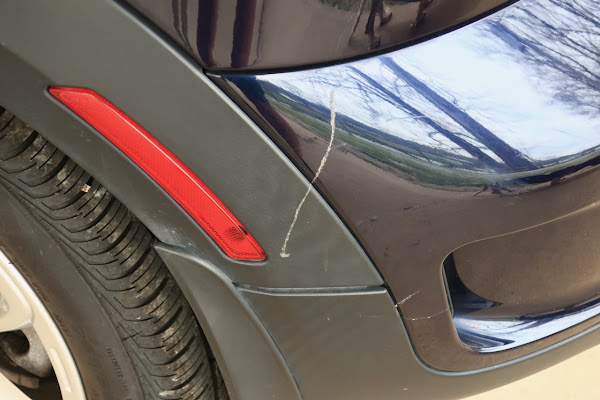 With my short run to the recycling center this morning I was able to stop by the library to turn in the two books I checked out last week and see what they had on their autobiography shelf and their 'new' section.

Victor Davis Hanson is not a Trump insider, past WH employee, in congress nor anywhere near the political scene. He did not work for Trump in any way nor has he ever met him and has no plans to. He was raised in a Democratic family, still lives in the same house he was raised in, Central California and still farms ... he has written many books but the one I picked up today was The Case For Trump.

It's hard to put down and I'll return to reading it as soon as I finish this blog post that will be scheduled to post early tonight. Take a look at it online, I think you will find it interesting to read ... both fans and haters.

There were FOUR new books about diets, food, and scientific proof on what I should eat, in the "new section" and I brought home Eat To Beat Disease by William Li, MD. I'll not go into detail but I compared my shopping list and what I have been eating to his lists (he has more than one) of foods he recommends.

What I found strange, bananas and avocados were not listed in his book nor found in the index in back. Hmmmmm.

It was good to see that what I have been eating overall is all on his lists of good food. He also states that you can tie in his information to any kind of diet you might be doing or any kind of diet prescribed by a doctor for any specific diseases you might have. You do not have to give up those good food diets to do his recommendations.

Chewy told me they were going to file a complaint with FedEx based on my feedback on their website for my last two out of three screwed up shipments. I received an email last night (the 10th) they had shipped my GlycoFlex Plus supplement for Stella ... I received it TODAY !!!!! Just like they use to do. My shipments in January and March took between five to seven days to arrive after I got the first notice it had shipped.

So another day in the books, marked as a success. No injuries, no falls, hounds are healthy and wise, well rested and I have not had any crushing urges for junk food. Yet .... we do have our annual TICK attack. As with any warm weather in the spring the ticks are out in force and of course they like me more than they like the hounds.

One thing good about wearing shorts while walking in the field (never recommended) ... I could see all 8 of them as they walk on my legs and before they could attach themselves. I checked both hounds, inside their ears, in their armpits and everywhere else .... ZERO found. I won the tick game today 8-0 ... the Reds won 5-0.

A few years ago on my blog on Blogger, I added a little square in the upper corner of the blog with my name and the hounds names listed individually for our "tick counter" ... over 120 total tics in April of that year and I won the contest by a landslide. It was tempting to join them as they chewed their NexGuard chews that year. I passed on that option.

Thunderstorms tomorrow but I already have an idea for my blog post on Friday ... I'll have to dig up some photos but I think you will enjoy them. New readers, those since December, will see what I meant when I mentioned Sadie and Stella in this morning's post.

Another very very nice day here in 'the tropics' of Southern Indiana.
at April 11, 2019