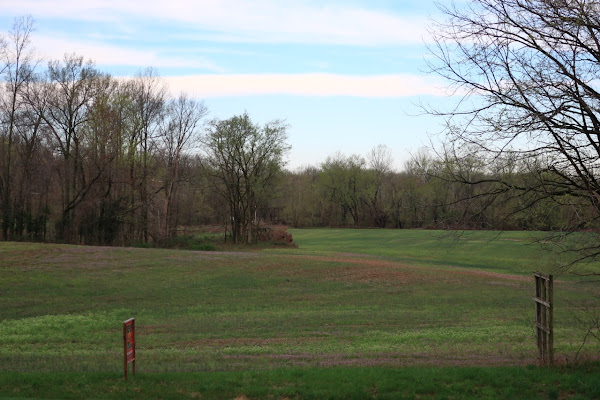 From the signs of puddles in the carport and in the field across the highway, it rained pretty hard last night as the forecast said it would. I didn't hear a thing even with the windows open. Evidently Stella knew exactly how much it rain and just how wet the field would be because no matter how hard I tried to coax her into walking, she refused!! 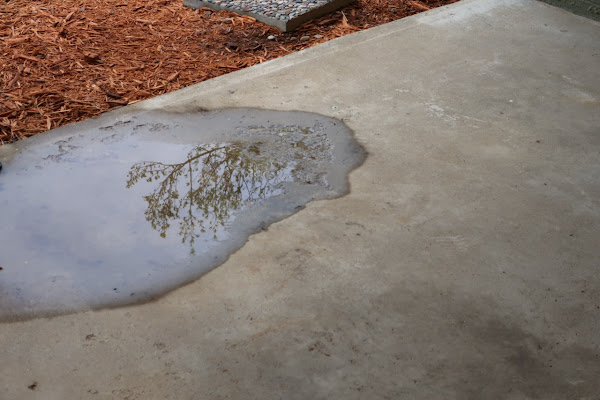 It was still nice weather though. About 25° cooler than yesterday morning, a little more windy but there is an expectation of sunny skies later this afternoon. That will put the lawn back to mowing height for Saturday afternoon. 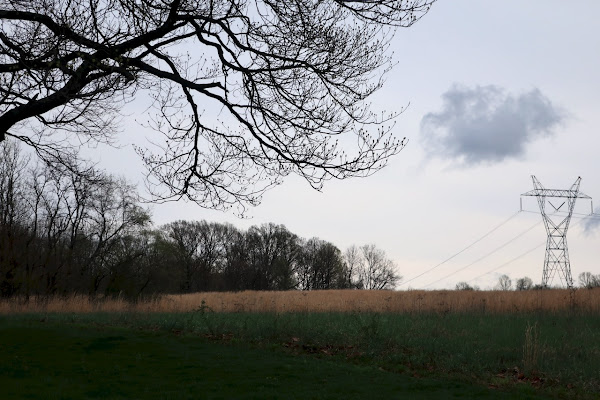 What I wouldn't do to be able to crawl inside the brain of a bloodhound to see what's in there, how it operates and how they think. It is one of the funniest breeds I've owned yet there has only been two breeds in 32 years of hounds. The basset hound and bloodhound is as far as I have ventured into the world of dogs.

I knew when I turned around to take this photo of Stella, there was a 'slight' chance she wasn't going anywhere. 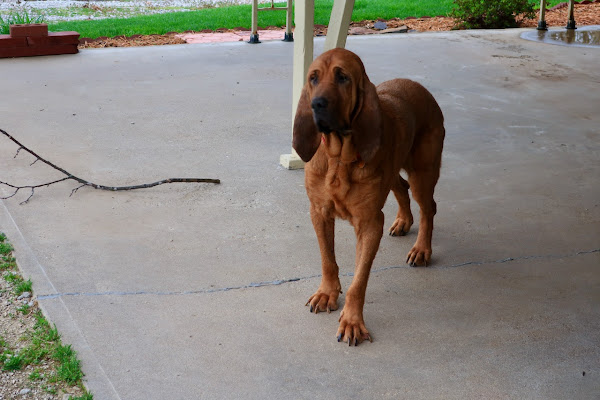 When I saw this familiar look, I KNEW she was not going anywhere. Was the ground of the field really that wet? Standing water in spots along the path? How does she know? 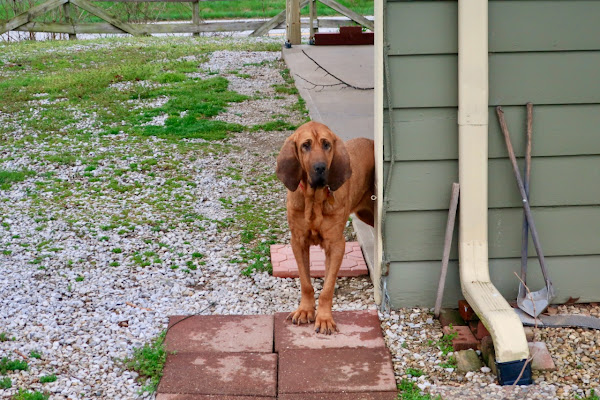 I was even willing to let her lead the way, expecting her to turn left along the side of the house, veer up the small incline heading toward the north end of the yard and possibly walking on the 'return' path to start our walk. I would follow her along the way with no problem. 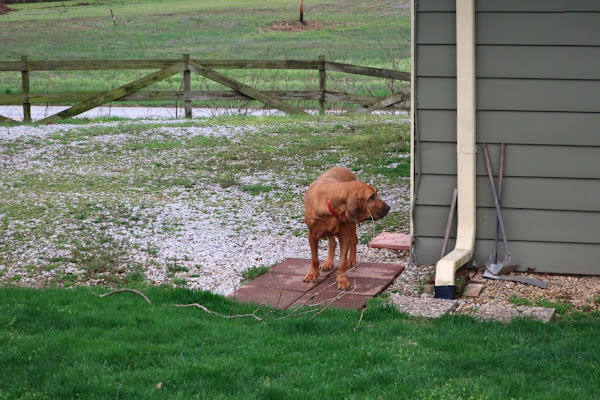 She did an about-face without any hesitation and headed for the door to go back inside. In fact she was so quick that by the time I turned the corner of the house trying to take a photo of her heading back to the door, she was already at the door waiting for me to open it.

So ... there will be no bloodhound walk on Friday morning. Maybe later, maybe not.

I started my day in a fog, it didn't feel like I slept that soundly. The hounds were not going to let me have more sleep, they wanted breakfast. I usually get between six to seven hours of sleep per night and close to half of that is sound sleep. Yet, that new bag of Seattle's Best Coffee (not Starbucks), smelled fantastic as I took a whiff inside the bag. It tasted even better and before I knew it, my brain activity rapidly increased.

I had the urge to drive the local area and look at some dog food, different from what I have been feeding the hounds since February 2017. If I were to go to the local farm supply store which has a wide range of dog food brands, grain-free and otherwise, I could also walk the aisles looking for something new to buy for lawn care or maintenance.  Maybe some winter vests or jackets would be on sale, which I don't really need.

Basically it's just a restlessness I get sometimes.

I like the dog food I have been feeding the hounds. It has limited ingredients and helped Heidi with her allergic reactions with raw chewed skin a few years ago. Stella is my new allergy puzzle though. It's never a fun puzzle to figure out either.

Could it be the dog food or those Glucosamine supplements I give her?

That's the million dollar question. If I don't give her the supplements, she has a hard time walking sometimes, well yelp on occasion and has a family history of bad hips based on what the previous owner told me. A vet a few years ago when looking at Heidi's skin issues told me his studies on dog food allergies resulted in finding out that dog food is not the major cause of allergies in dogs.

That makes the puzzle all the harder to solve.

An old friend of mine living in Phoenix has an older Mastiff that started having some severe issues with his skin. Luckily it took only one vet trip for him to find a solution. It was something I had never heard of during the long time I have had hounds. "Hypoallergenic Protein" was the key word and the key to solving the Mastiff's problem.

Dog foods that are good for allergies always try to stay away from chicken, beef, dairy and eggs. My ingredient lists of every dog food I used, listed on a spreadsheet showed that even the best limited ingredient, grain-free foods with a protein source other than chicken or beef .... ALWAYS has some sort of chicken (flavor or meal) lower down the list.

Maybe it's not chicken that is bothering Stella. There are no kinds of meat in the GlycoFlex Plus supplement. But there is some chicken flavor in her lamb meal and rice food.

The symptoms of an allergy can include skin rash, hives, itching, paw biting, obsessive licking and sometimes nausea or vomiting. She shows only those highlighted in bold print. Especially the paw biting and itching. I have scanned every inch of her looking for fleas ... I did not find any on her or me.

So I am very tempted to go the route that my friend took with his Mastiff because he saw a sudden change within 8-12 days after switching to a dog food with hypoallergenic protein. Basically that is food with lower protein, lower fat and more carbs. His vet still tells him to feed the food for two months as prescribed before they decide what food to move to.

Looking back through photos of blog posts of Stella in the past four years that she has been here (August 2015), there have been times she has stopped in the field to scratch. So then the question is .... environmental allergy? That is a major cause of dog allergies. We tried weekly shots with Heidi to combat environmental allergies with negative results in 2015. She only improved when I went to the limited ingredients dog food I use now.

A blog reader suggested last month that I splash a little yogurt on her food every meal. Just a teaspoon of it, recommenced by her vet and that showed results. A few containers of yogurt is a lot cheaper than a 20 pound bag of Hypoallergenic Protein dog food ... unless I started eating the yogurt.  :)

I admit I am not a fan of trying to solve dog allergies. My curiosity to try different foods will get the best of me. Plus I need to walk through the aisles of that farm supply store and tell myself no a million times when I ask if I really need this.  LOL

As long as the Cincinnati Reds continue to win, weather and dog allergies are not a factor in my day. Strange how sports can do that to you mental outlook. It's like I told that California State Patrolman in 1984, on a Sunday afternoon celebrating Cinco de Mayo cruising the coast highway back home to Carlsbad. I was driving my 1967 mint condition VW Bus, with the stereo blasting loud enough that I didn't hear his siren through downtown Encinitas. My friend saw him in the side mirror and said "Floyd, I think that guy behind you want to talk to you."  :)

As he arrested me he told me I was the happiest drunk he had ever arrested. I told him "my Reds are on a 7 game winning streak!!!!" ...

The winning streak ended THAT NIGHT.

Well I am off to look around at Orschein Farm Supply store .... maybe I'll buy a new lawn mower instead ... and some hypoallergenic dog food for Stella  :)

All is good this morning in 'the tropics' of Southern Indiana.
at April 12, 2019