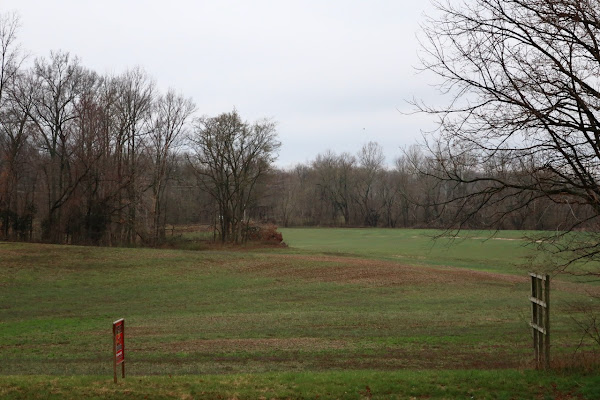 It was pitch black, completely quiet as I woke from one of the most strangest dreams I've had. Of course I could remember nothing about it as I lay there for the first few seconds. I did hear something familiar though ... that bloodhound whine just to the left side of my bed. Stella was standing next to it waking me up. How long had she been trying? 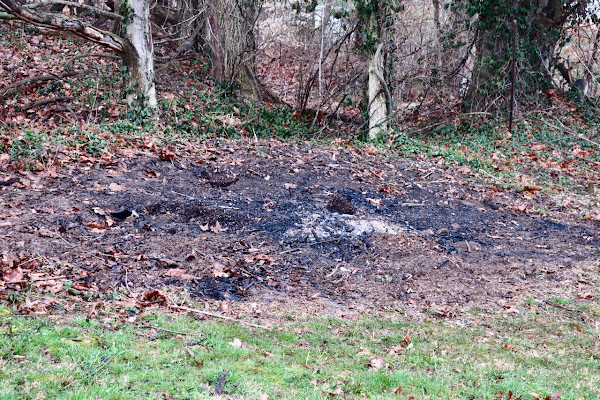 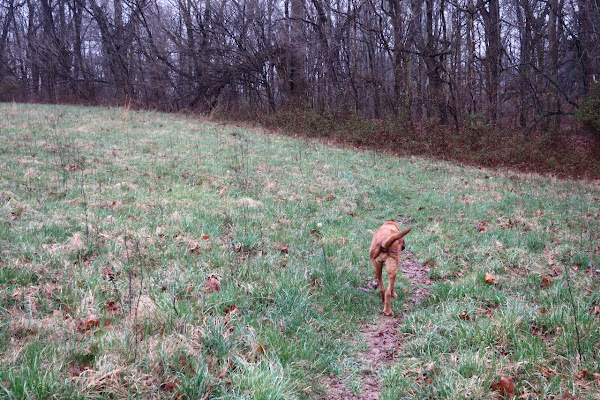 She returned from outside in about 5 minutes, walked in and went straight to her dog bed and went back to sleep. I was still awake but I wasn't going to get up that early and start blogging. I did that in December when I first moved my blog here on WordPress. Not today though.

Luckily the hounds let me sleep a little later than normal, just past 8:30am. The daily routine changed drastically and really, it already had at 4:13am. We took our morning walk before I made any coffee. I was active without my two cups of caffeine. That was strange. 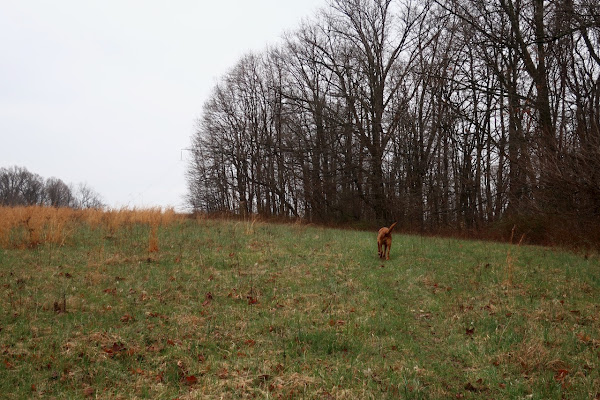 You forget how nice things are until you don't have it, then it returns ... Warm Weather !!!

Since it rained all night, starting while I was watching the baseball game on tv, the path was pretty soft but it was not slick with mud and leaves under my boots. I could see how fast wild bushes and the grass is greening up. If the sun were to every get hot during the day, all of this would be growing much faster. 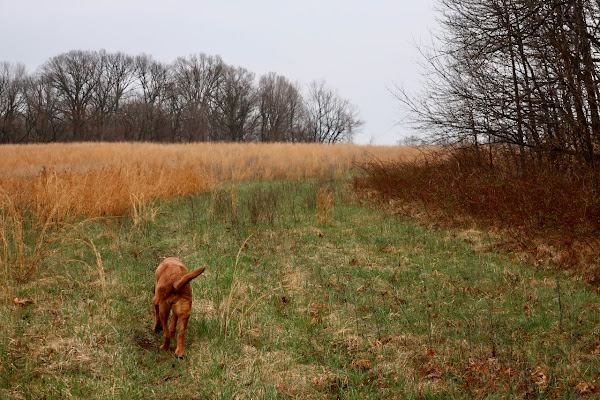 I wasn't sure what I had planed for the day but the only thing I could think of was some minor lawn mower repair. The mower old but runs great. There have been too many times of mowing wet grass, where I didn't clean it after I mowed. So here many years later I have a few small holes worn through the metal bucket. I might be buying a new mower but I want to try something I read last fall about repairing it.

An article from "Handyman" website, shows that I can sand around each of those holes, preferably to bare metal, then apply some Gorilla Tape. My choice whether to paint over it to match the color of the mower. That will be my one thing of the day to do. Then the first test to see if it works will be early next week after it stops raining. 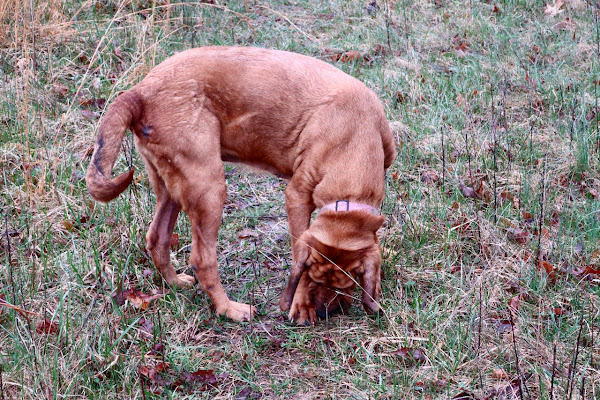 It was good to feel that the 800mg of Ibuprofen I took right before I went to bed, sucked all of the muscle soreness out of me. I felt nothing this morning as I walked the path alone. I had let Stella go off on her own, thinking I would meet her somewhere on the way back home. 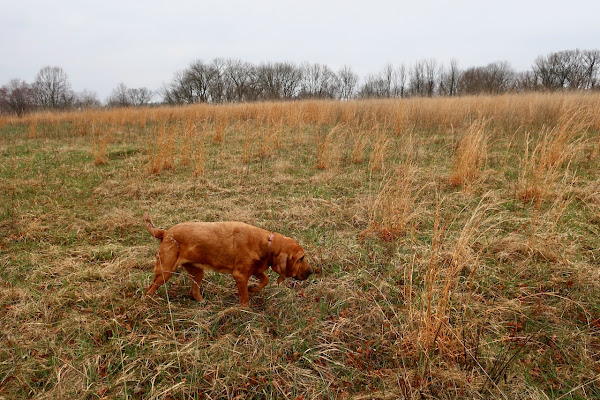 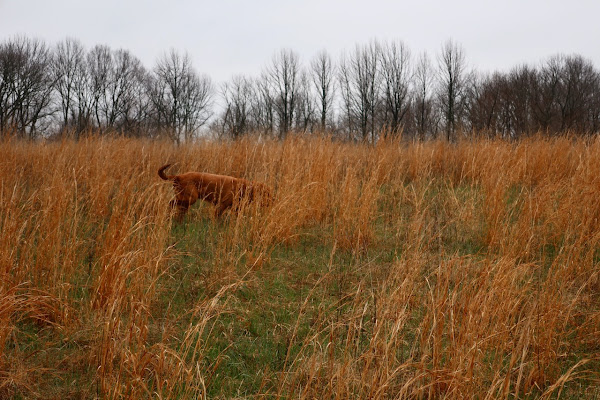 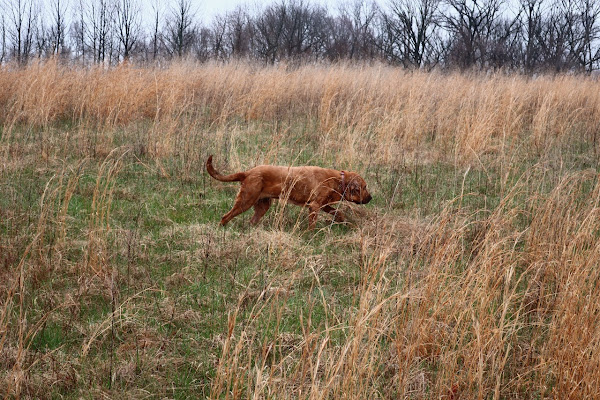 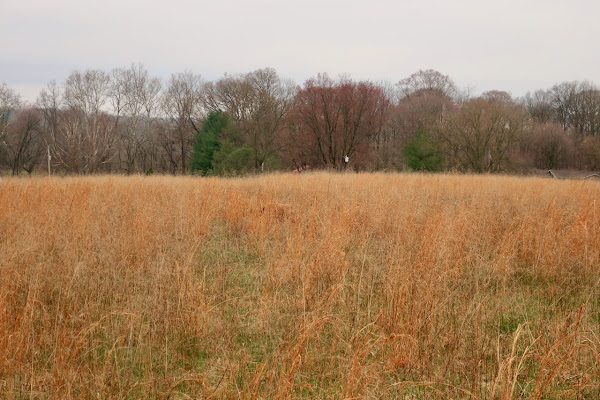 As I was on the last part of the walk home, you can barely see Stella just left of center. 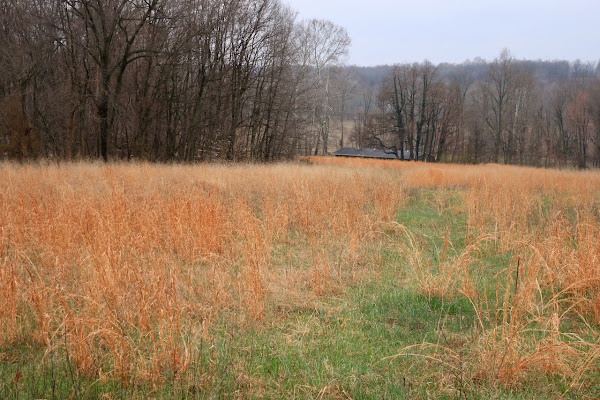 No doubt she has found a fresh spot of deer scat. 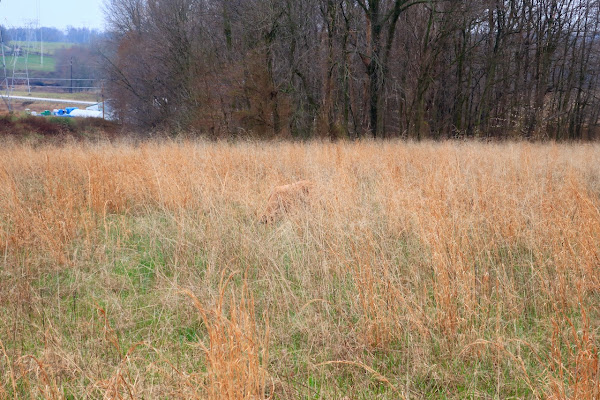 She evidently was happy with the freedom I gave her this morning. She walked right over to our path when I called her name. She is only a stubborn bloodhound when she wants to be and hears me perfectly clear. She just chooses what she wants to hear.  :) 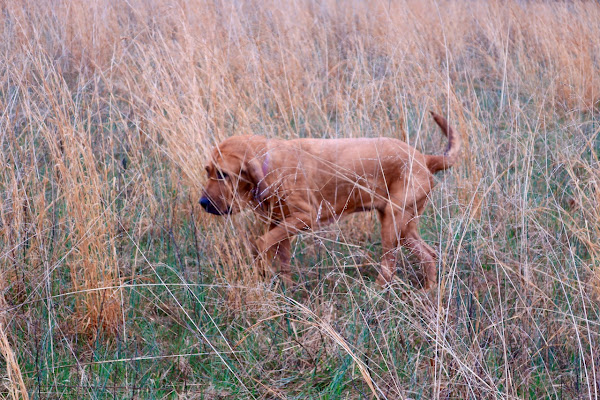 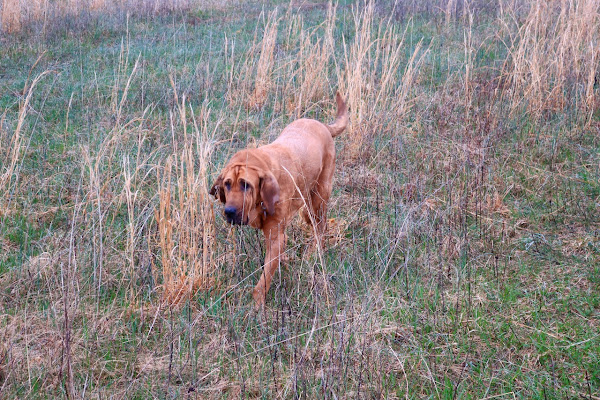 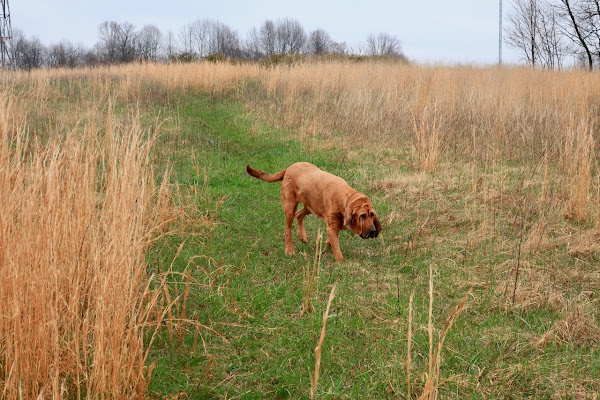 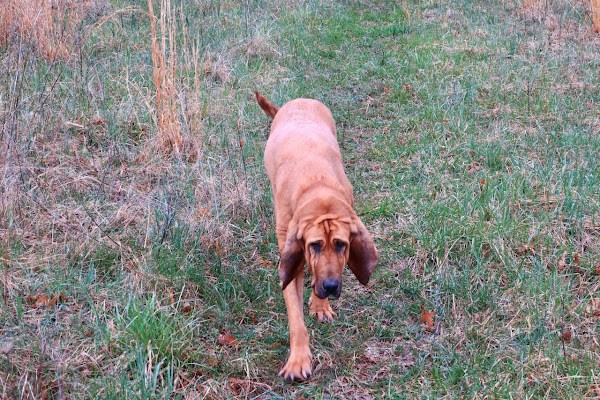 Shaking a little more of the ear cleaner out of her ears this morning. Yesterday was Hound Ears Cleaning Day. She has much cleaner ears than Heidi. 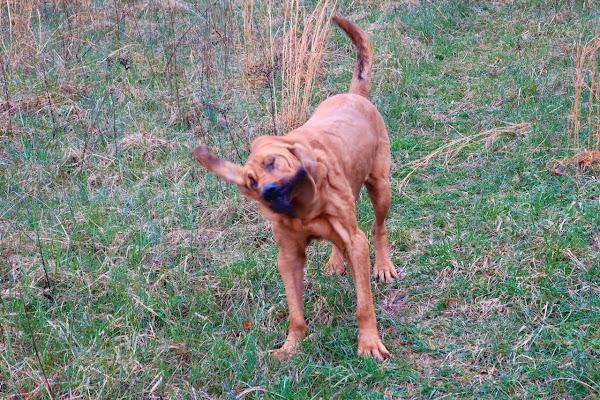 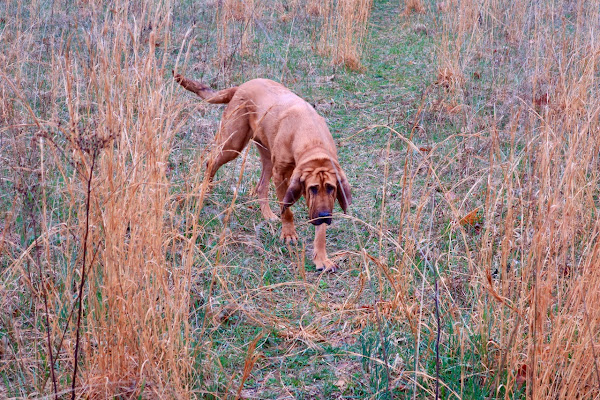 It was extremely quiet this morning has we walked. I knew it was a Friday but traffic noise from the highway sounded like a Sunday. 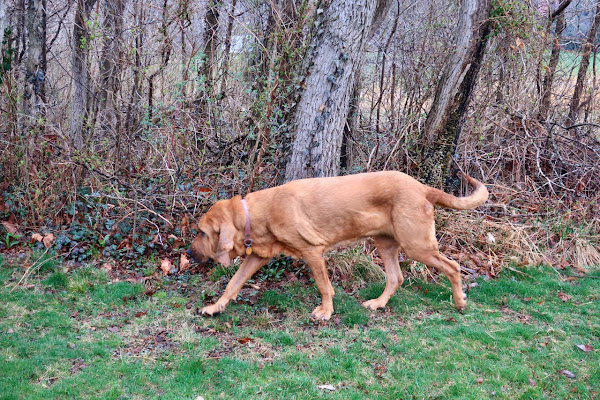 It looks like I missed one of my small raked piles of leaves and twigs the other day. 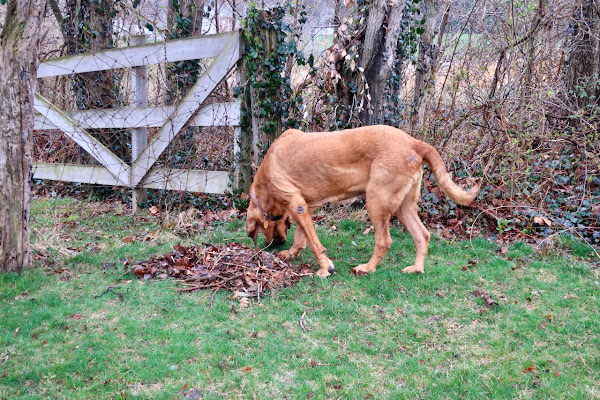 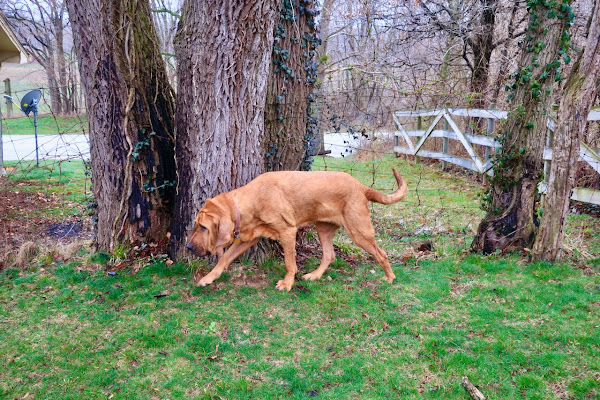 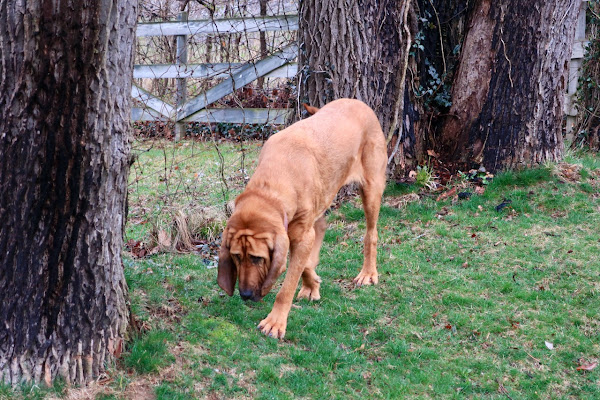 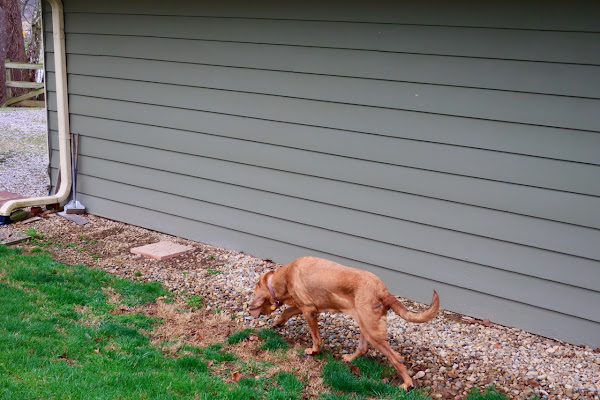 Not only does she walk near the house when she finishes her walk but also as close as possible to the car .. every morning. As long as the rain is in the forecast for the next few days, washing the car will be on hold. 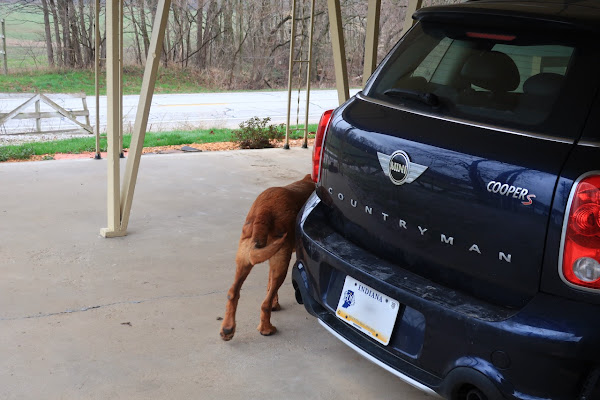 I love having the windows open again. Just barely above 50° but feels warmer. A hundred different birds are talking. Other than that it's quiet as I finish my second cup of coffee. There's that woodpecker again.

A month or so ago I read the latest book about Howard Schultz. After reading about who he was and what he was about I had a feeling that I could vote for that man if he were to run for President. Last night Fox News had a "Town Hall" with Howard Schultz. Of course I have no doubt that all attendees are screened as well as all the questions but once again after watching the show, I had a feeling I could vote for that man. I hope he chooses to run.

He has some good ideas on how to heal the country if elected. He has experience talking to world leaders as he expanded his Starbuck's business. His business was the first to give free health care to all employees, fulltime or partime. He can work with people from different backgrounds, have different colored skin, male or female.

As I sat there listening to him answer the questions fired at him, I kept wondering if it was even possible to have both sides of Congress work with him as President to finally get something done. I kind of leaned toward the word "no" ... I have no doubt the Democrats would be pissed even if he was elected because they didn't put their "chosen one" in office. I don't know who that is.

They will be very angry if he announces this summer that he is going to run. They feel that is handing another 4 years to Trump because Howard Schultz will NOT run as a Democrat. Like he said last night, "I didn't leave the demorcratic party, the party left me." He also thinks he can win those 8 states that determine who is president in every election.

It will be interesting to see how all of this plays out by November 2020.

In the mean time I will go back to watching my Cincinnat Reds, who are playing much better baseball this summer but still have a 1-5 reccored because they cannot score runs and cannot hit a baseball. Last year it was just the opposite they couldn't pitch but could hit. They started last year 1-13. It's a long season, the bats will warm up but it's never good digging yourself in a hole at the start of a season.

Of course they are ONLY YELLING a lot in Cincinnat with the poor record, a new manager with analytics but they are not JUMPING OFF BRIDGES like they are in Chicago because the Cubs are also 1-5, but they are suppose to win the World Series and not suffer through another bad season.

A perfect overcast day this morning in 'the tropics' of Southern Indiana.
at April 05, 2019