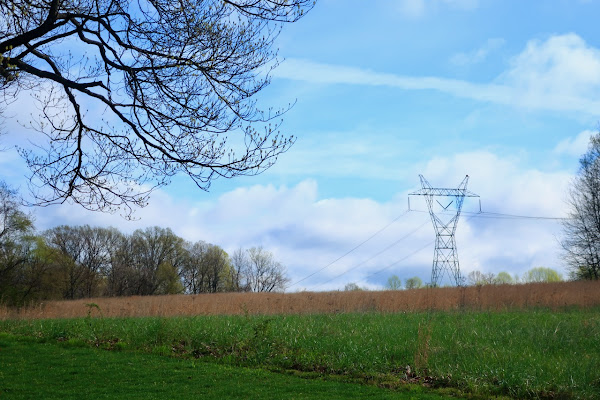 It was less than a week ago where I was washing my car after mowing the yard wearing a t-shirt and cargo shorts. My brain was sure that "spring is here" with the hot temps of summer right around the corner. As Stella and I finished our walk this morning, the "feels like" temperature was 31°. It felt colder than that as we marched through the wet field. 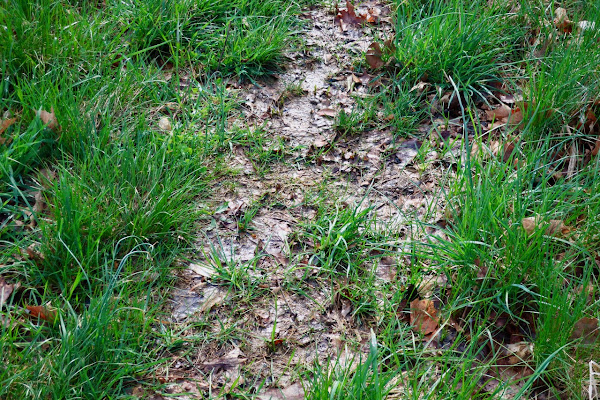 With more rain last night I knew the field would be wetter than Sunday's walk. Stella knew that too and took a left to drier ground within a few steps starting her walk. Only today the wind was freezing cold. I had gloves and a sock hat on but I may have worn the wrong jacket ... I was freezing but too lazy to go back inside and change it for the down parka. 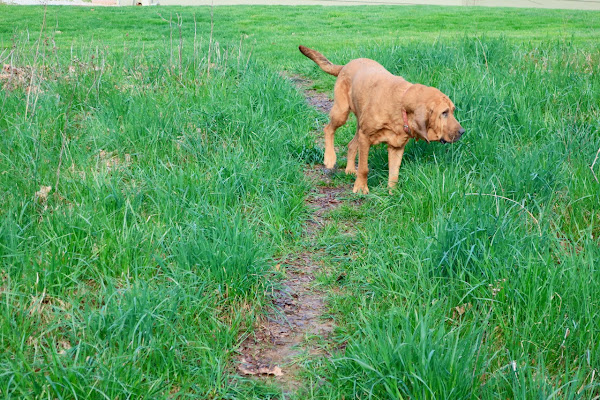 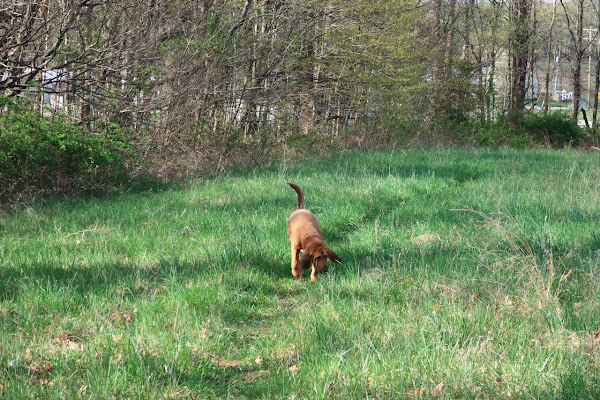 Walking up earlier than normal this morning I had plenty of time to read all of my online websites I get on Feedly and Flipboard. Both of those readers have anything political filtered out of their search. It's nice staying away from the news. Sports, hounds and nutrition keep me plenty busy enough, with additional DYI articles to read. 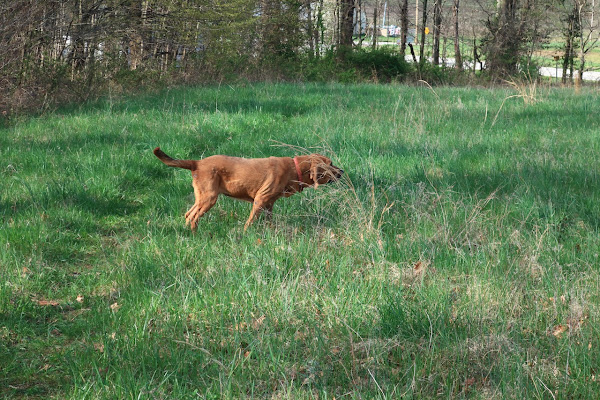 There seemed to be a lot of scent to smell today. Stella was positive there had been something inside our carport over by the trash can that is covered and well protected from any raccoons. Then she checked every inch of the edge of the concrete and gravel ... it could have been a cat I saw a few years ago that walked that same route. 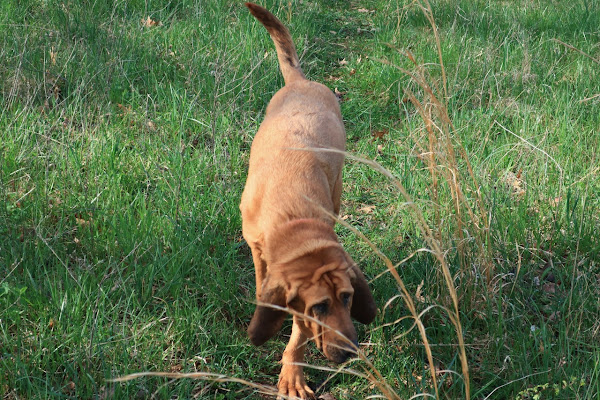 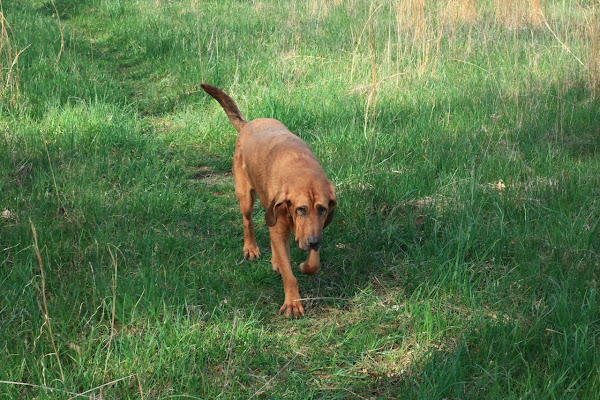 She had a little hop to her step today and more than a few times I caught her trotting along the path. When she ran by me as I was trying to take a photo of her trotting, I knew she was feeling pretty good today. 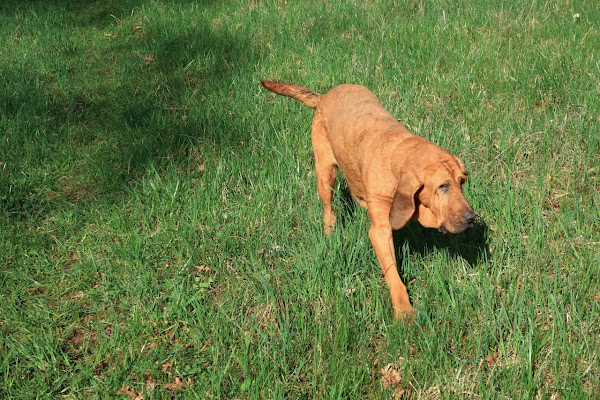 I wasn't sure where she was heading but she made an abrupt turn left and was heading toward the middle of the field, ignoring me all the way. There was something in the air that her nose had picked up. With her head and nose raised high, she pranced through the tall grass. 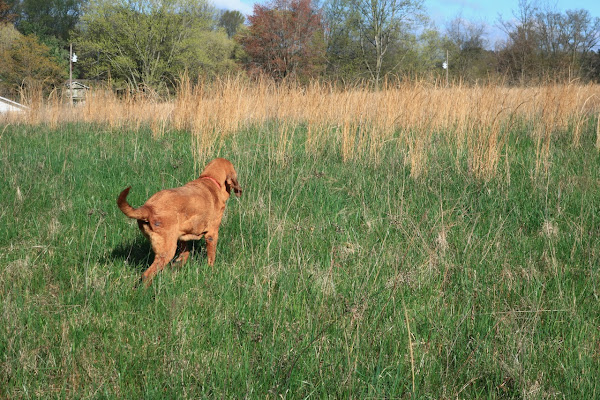 Then when she was sure she had caught whatever had been in the middle of the field ... a more intense search. 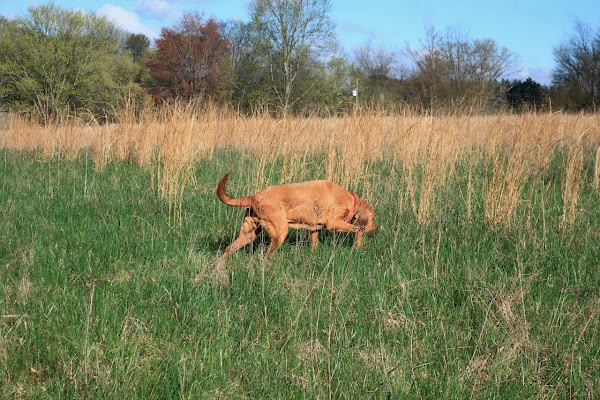 Typical Stella ... so intense in searching and almost as fast as she started, she stops and turned toward the path. Not a word was said during this whole time because I wanted to see where she would go and what she might find. 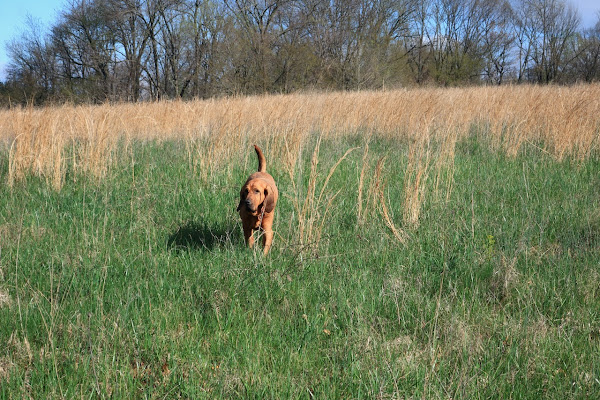 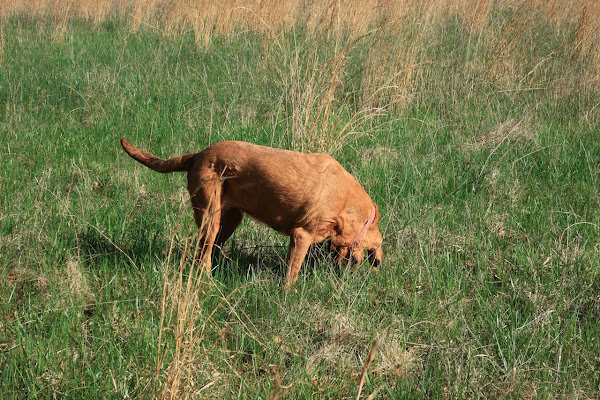 There were a lot of these puddles on our path today 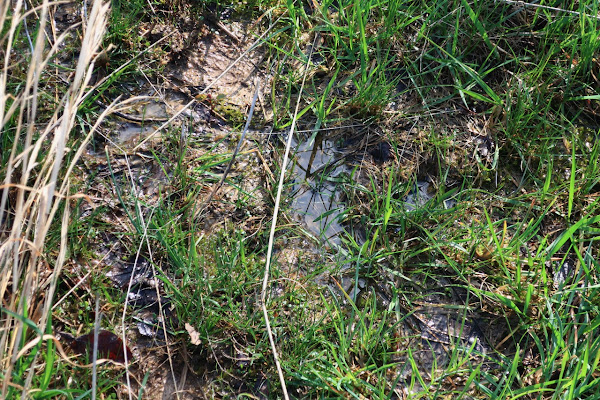 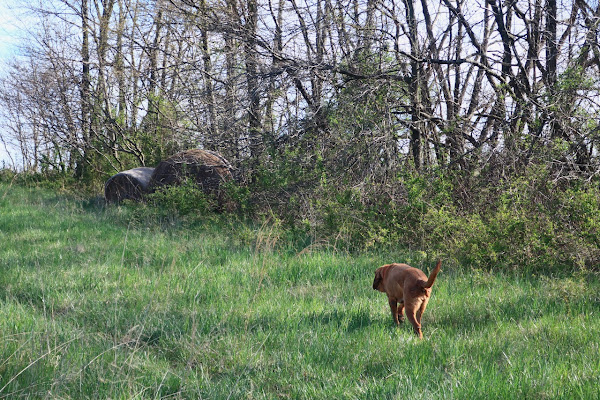 I am pretty sure there had been some recent deer traffic along the edge of the back field. She went farther north than she normally does and that is a sure sign the deer were heading to the woods on the north side of the field or possibly to the right hopping into that field. 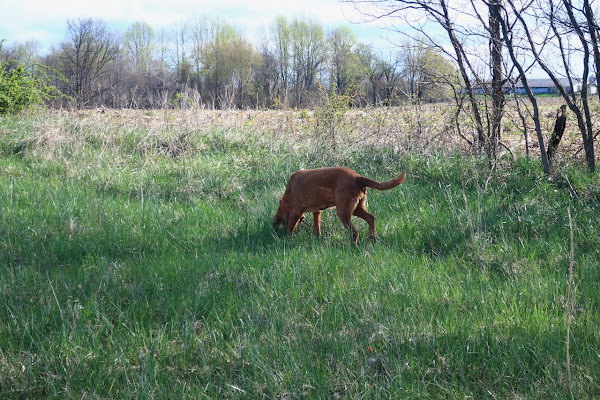 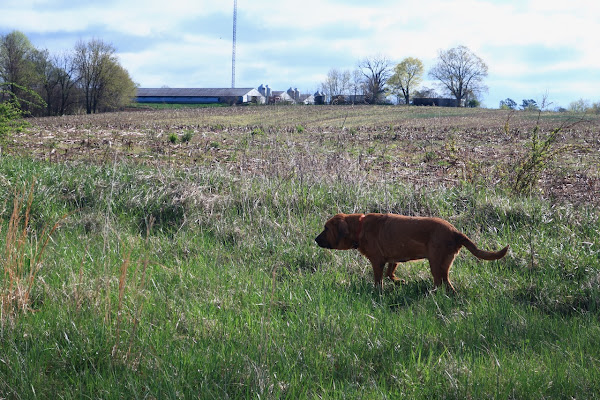 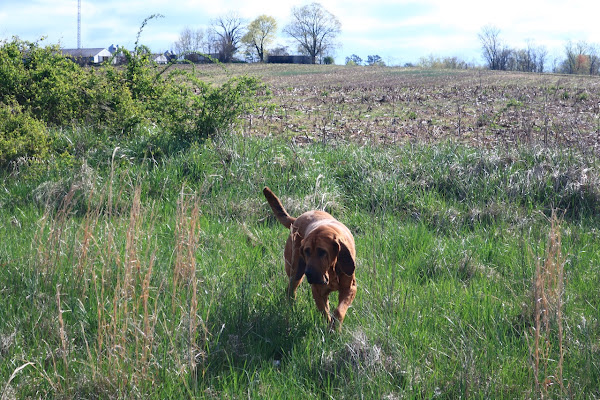 It might have been cold this morning but with the sunshine out it was still a nice morning. By late afternoon it will climb to the high 50's and with a lot days in the next 10 being in the mid-70's. 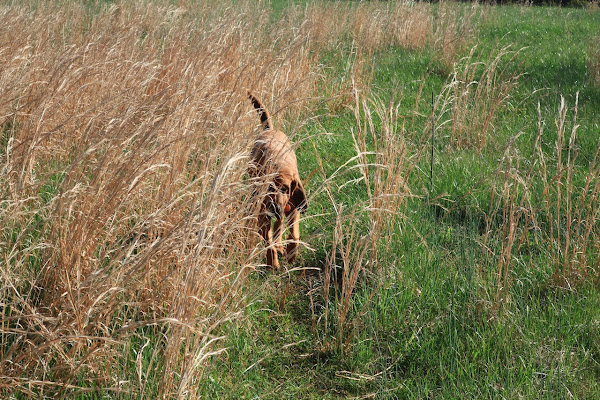 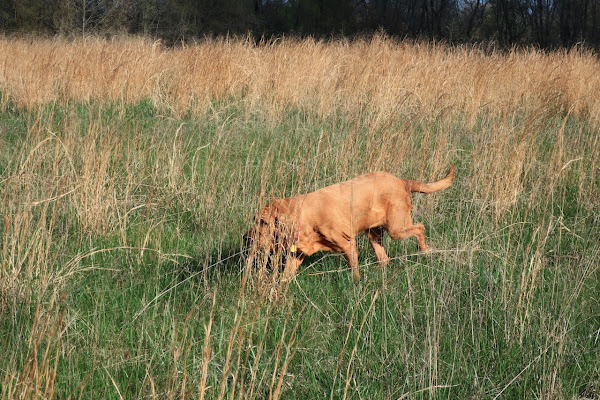 Stella seemed to be enjoying her walk this morning, roaming in all parts of the field. Maybe the colder weather had calibrated her brain cells. Or she may like the cooler weather. 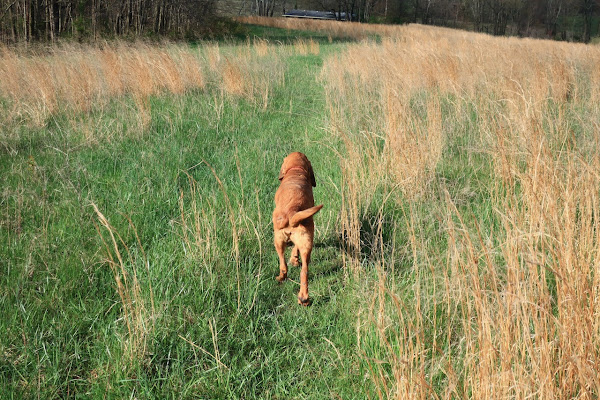 Finally after many attempts this morning I was able to catch her trotting. 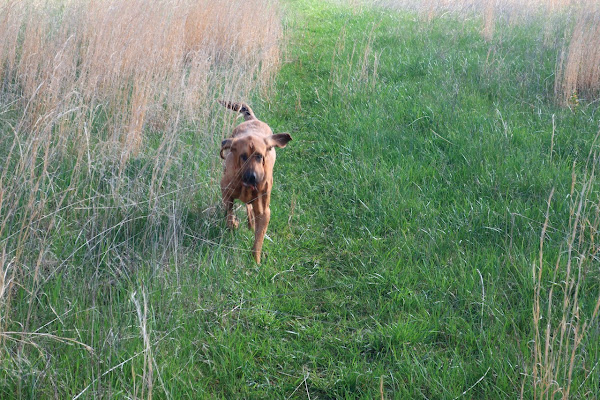 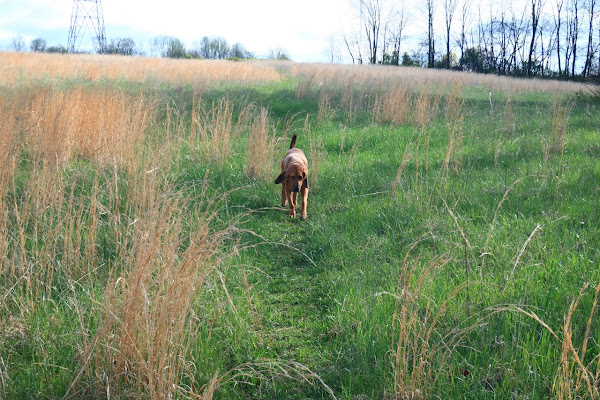 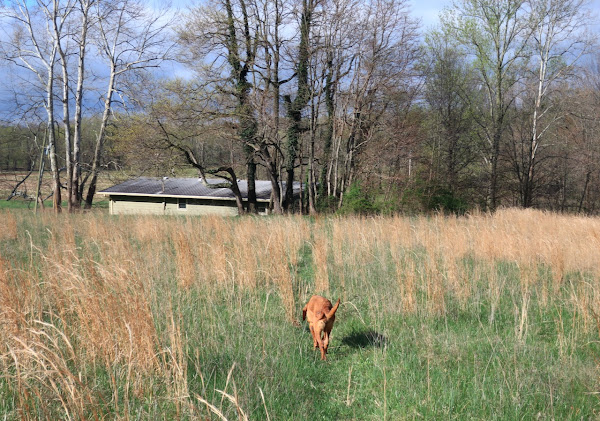 Her daily look to the right, either to the neighbor's yard or the small wooded area. 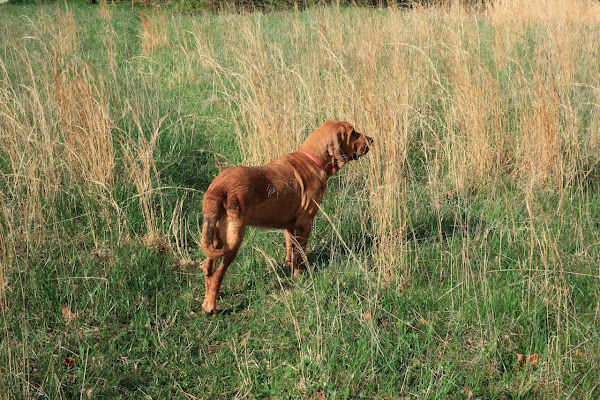 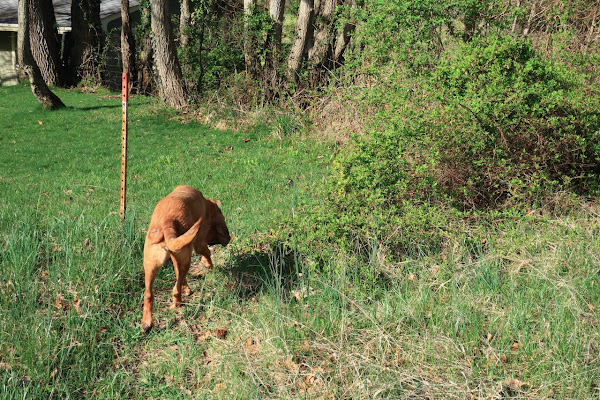 Bloodhounds do not track rabbits, that job is for basset hounds, but I wonder if a rabbit is what she smells in that area. I saw a rabbit take off running through that brush just last Friday before Stella walked into the yard. 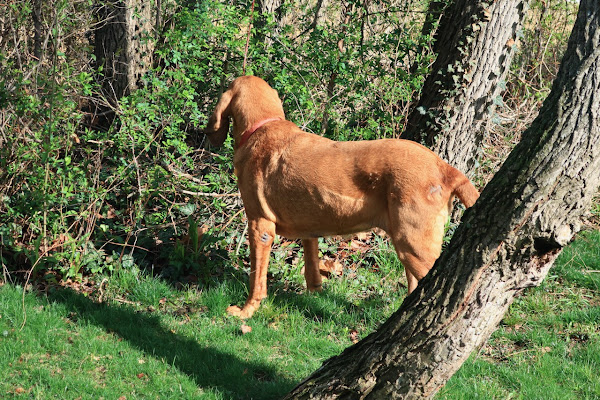 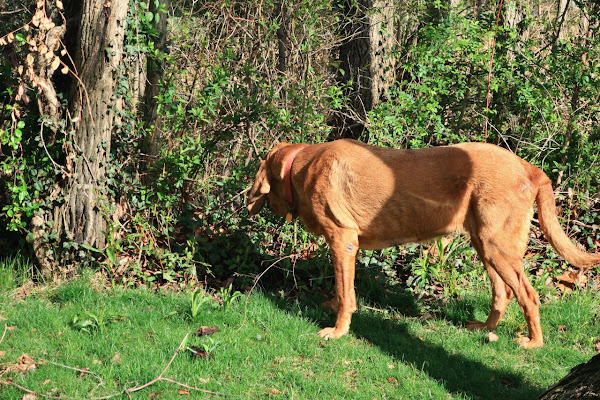 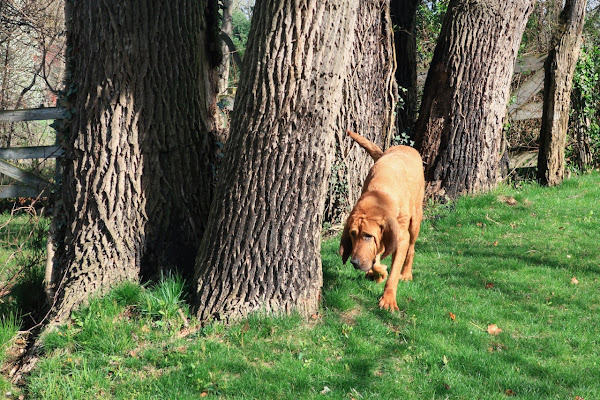 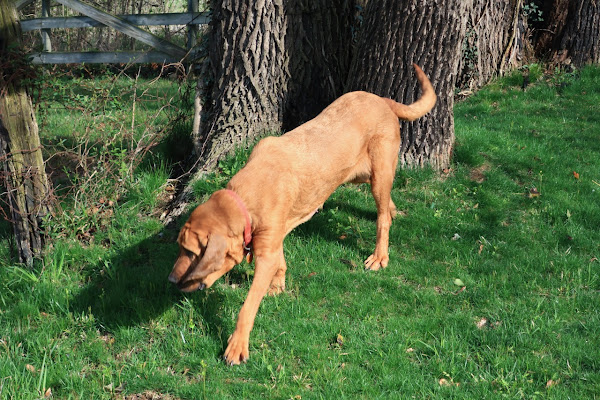 You cannot walk much closer to the house than this 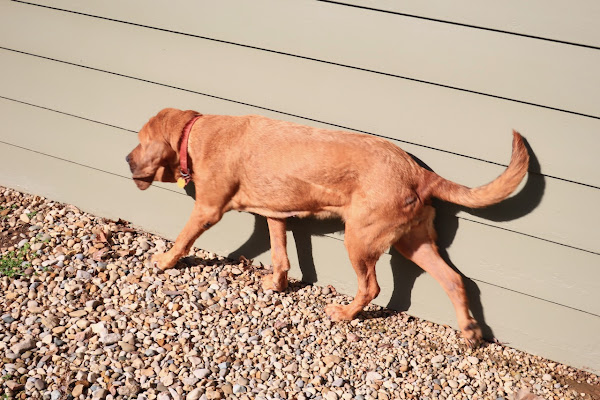 It will be a nice day today because the sun is out. I don't have much planned outside, if anything at all. It will be another day of book reading. Between the book about Steve Jobs that I read off and on, then the new book about Trump written by the lifelong Democrat Victor Hanson, both books are slow reads but very.

It will be a late night tonight since the Cincinnati Reds are playing in Los Angeles with a start time of 10pm local.

Heidi is up and awake ... barking loudly ... wanting lunch. She has been pretty demanding lately with more barking and running around the house wanting food or her sleeping bag. It might be cold but I will not turn on the heater because it's April and that means spring is here.  :)

We start another week here in 'the tropics' of Southern Indiana.
at April 15, 2019