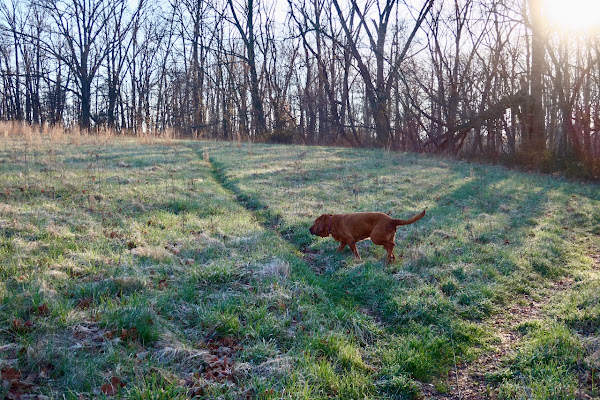 I couldn't wait for Stella this morning. Luckily she was up and awake, ready to take the morning walk. As I glanced out to see what kind of field we had today before choosing what boots to wear, I swear I could tell that the backyard and field had grown over night. I'll be 'spot' mowing the yard at first because it never grows even at the start of spring. 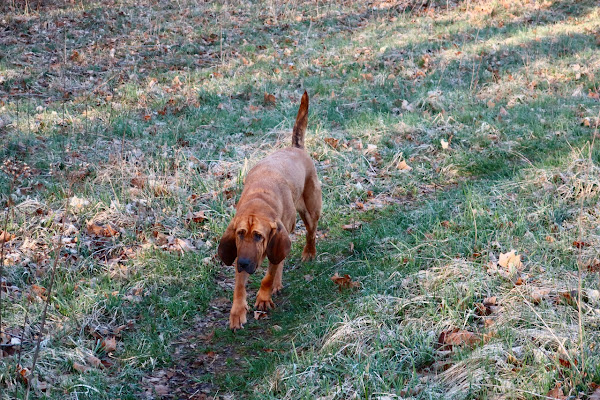 Can you tell I am already finding it hard what to blog about this morning? After yesterday's excitement there has been some letdown this morning. I like seeing "mid-60's" by this afternoon but it was the coldest morning in the past week as we started the walk. 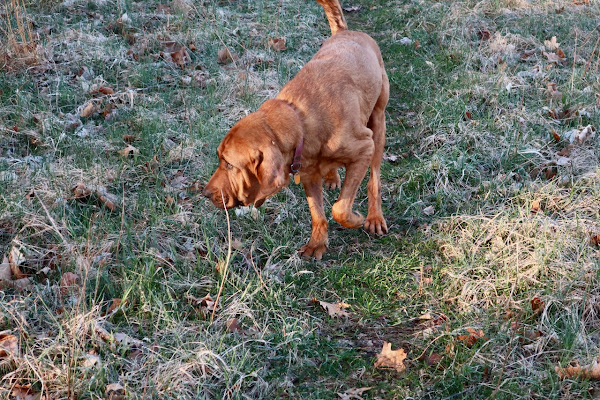 I am barely feeling an urge to pick up every stick and limb in my yard today. With a Cincinnati Reds game starting at noon, I'll either finish that project before the game or wait for warmer weather, then tape the game to watch tonight. The weather is too nice to stay inside. I did that all winter. 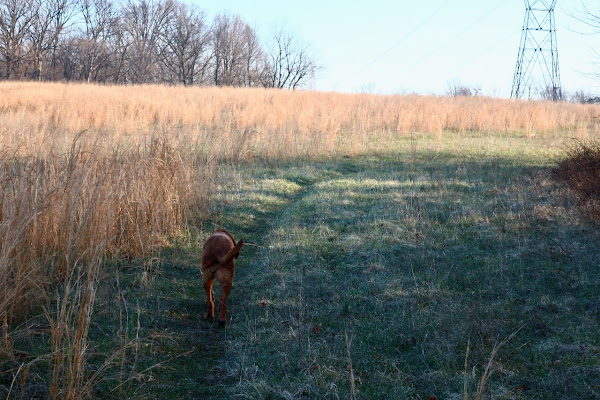 While watching tv last night, a Reds game, I started thinking again that DirecTv has a clearer picture than DishNetwork. I went through that thought process before making the change at the end of my DirecTv contract in February 2018. It was different enough to notice it right after they did the installation. The tech forums claim what I am seeing and agree.

Like any two competitive companies, each have their pros and cons. Both companies have features that the other doesn't but those you like. I have about 10 months before I have to make a decision whether to stay or move from DishNetwork. By that time AT&T might have streaming services in my area, but they don't at this time. 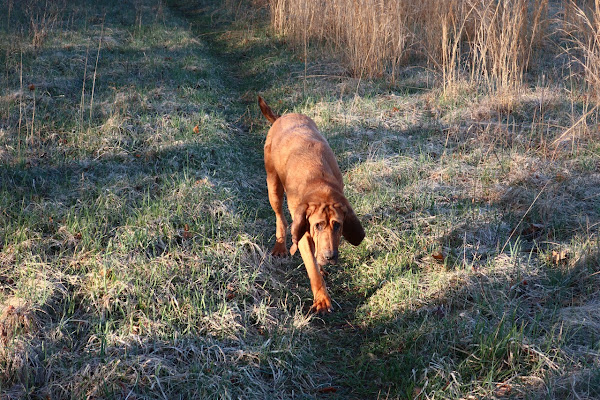 My mind was wandering this morning as I walked. Will it be a laundry day or a trip to the grocery store? Hold off on until it is a rainy day and do yard cleanup today or will procrastination win out where I do nothing? I could do a mix of all, so I guess I'll know by the end of the day. That's the advantage of being retired. I wasn't as focused this morning as I was yesterday. 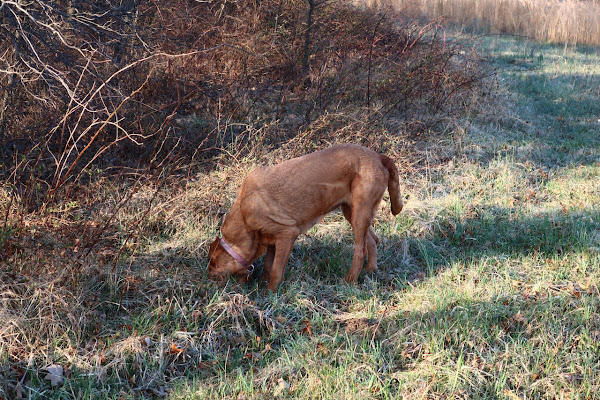 I've noticed from the few blogs I follow now, that almost all of the full-time travelers from seven years ago have come off the road and travel part time, if at all. Some have passed on, others just disappeared from blogging. I remember how obsessed I was back in 2011 and 2012 spending most of my free time researching RVs and making plans for when I retired two years later, with two basset hounds and two bloodhounds.

I spent a lot of time reading those bloggers that lived on the road as well as the forums for RVing and different type of rigs. During those times I also read about a lot of places I had already visited and a few where I had lived. I did a lot more traveling and exploring the surrounding areas when I lived out west in California and later Washington. 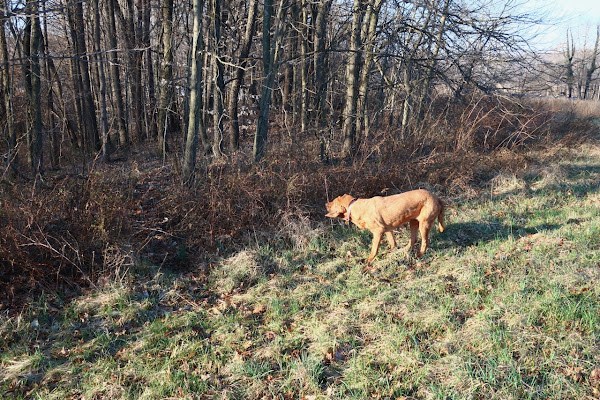 Stella had a thorn bush get stuck to her jowls today, as she pulled away.

While I thought back to those times yesterday I knew that some roadtrips will take place in the future. The thought of traveling might have also been triggered when I looked at my list of towns in the generic weather app that comes with the iPhone, and seeing temperatures 20°-30° warmer than my April day was. 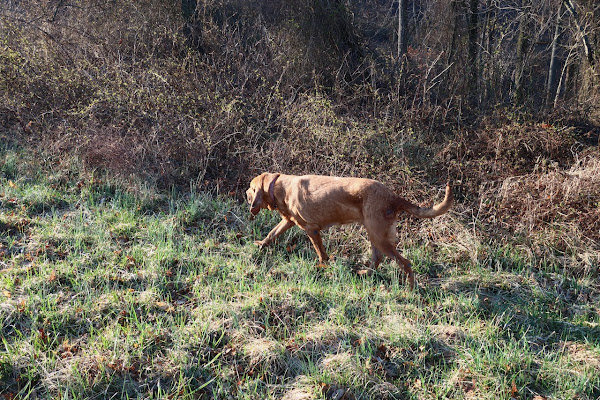 Like I have stated many times before, mostly on my older blog, this house and field are the best situation for my hounds and they are my #1 priority. I also like living here and enjoy the area. Things are simple, quiet most of the time and away from all the chaos. I've never lived anywhere as long as I have lived here in this house. 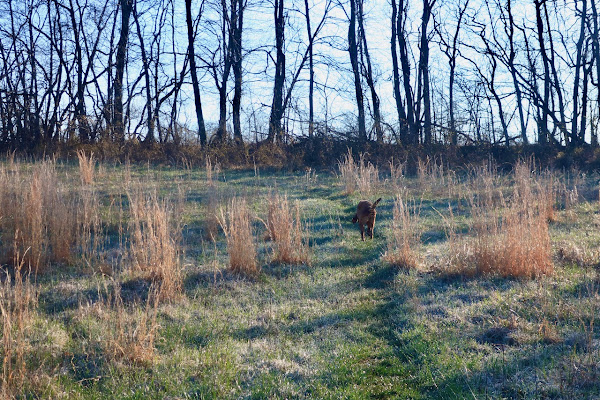 Stella wasn't tracking scent today even if it looks like it. Oh I guess she was ... deer scat scent, not deer travel. I had to stop her numerous times from eating it. I still don't think that is a good idea and I've read articles both ways, about dogs eating crap. She is not the first that has done this in my history of hounds. Some did some didn't. 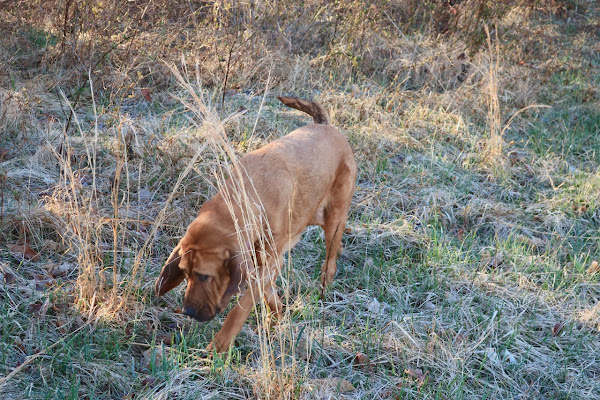 I was a little surprised I did not have any kind of heartburn after having that medium pizza yesterday. I ate half of it there and the other half last night for dinner. I expected to be woken up in the middle of the night with indigestion but that did not happen. That's a good thing. I also stayed within my daily calorie limit by not eating anything else. I just wasn't hungry after I finished the last piece of pizza. 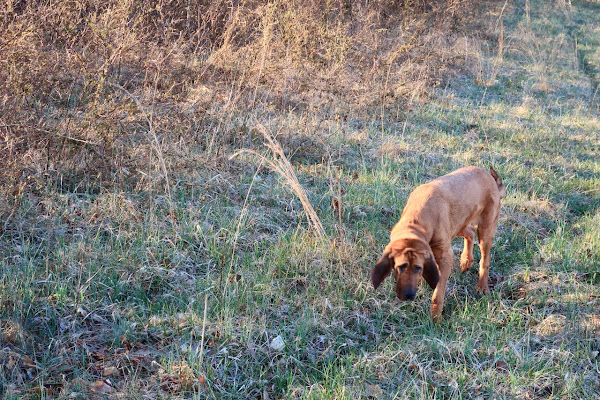 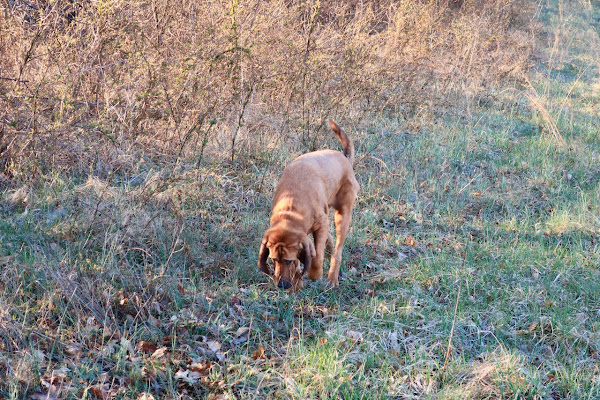 This is about all I have for this morning. I had thought about waiting until the end of the day to post but I have to many photos to do that. Maybe I'll hold off posting this, delete some of these photos and add some afternoon photos, then schedule this to publish later today. 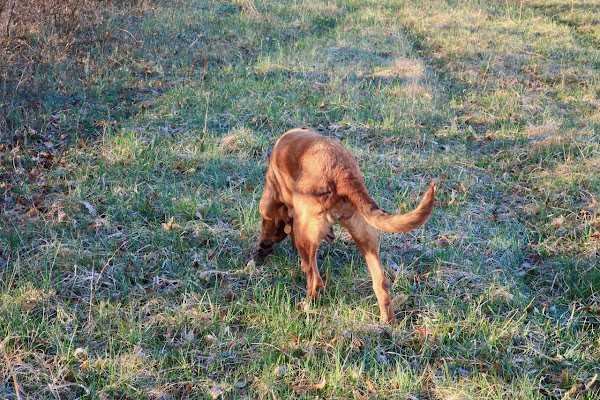 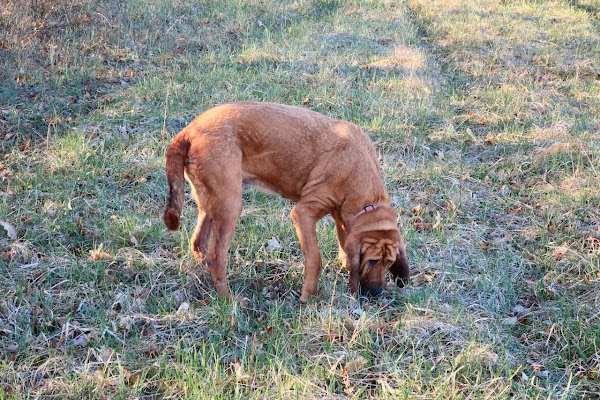 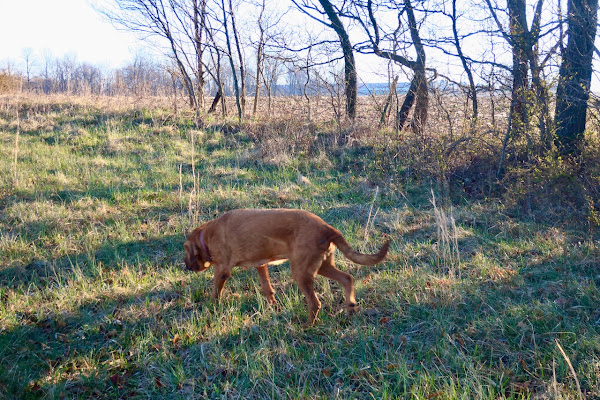 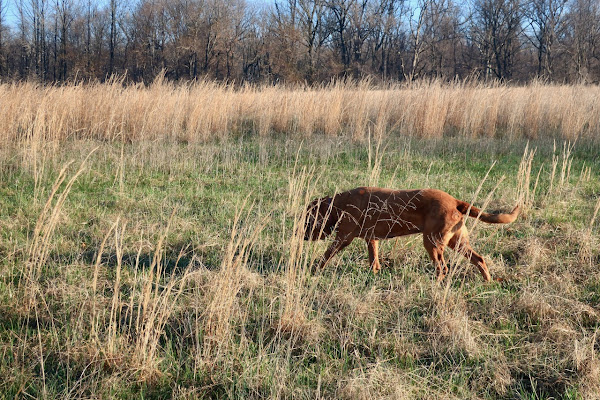 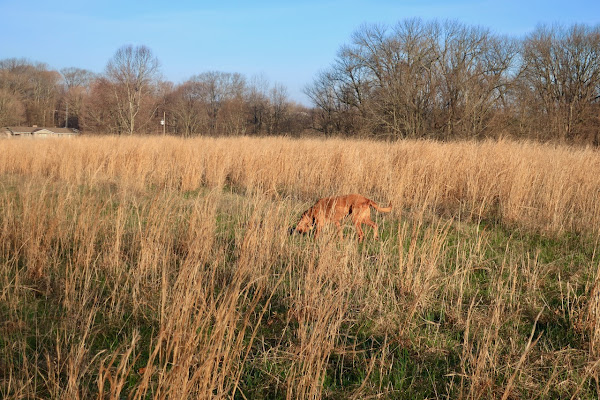 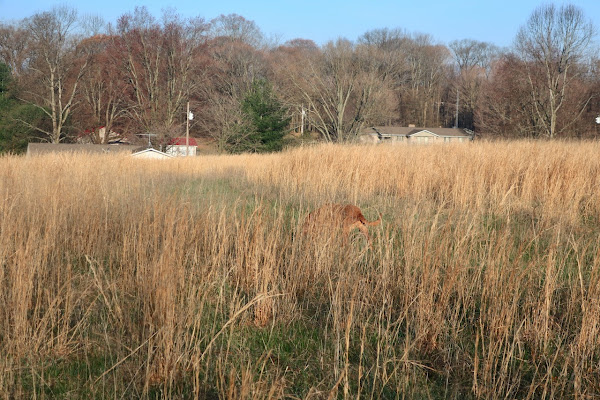 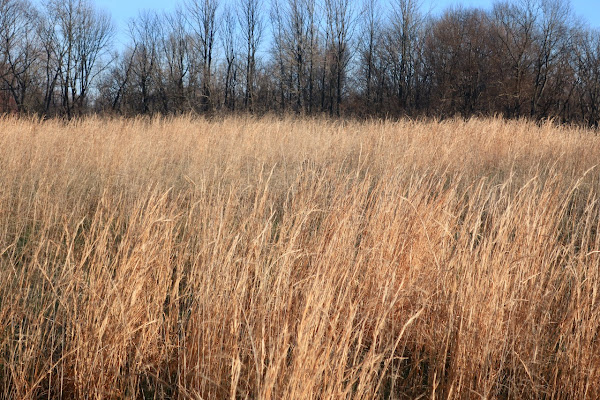 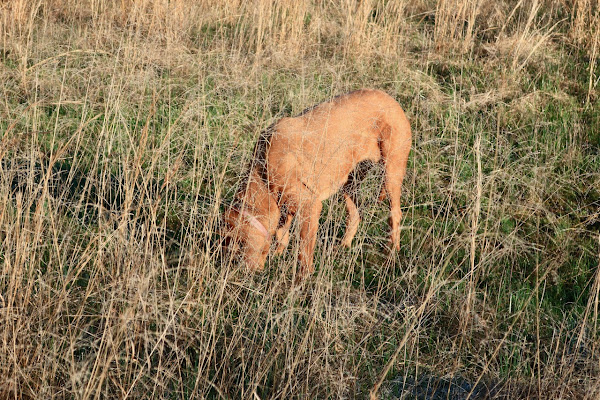 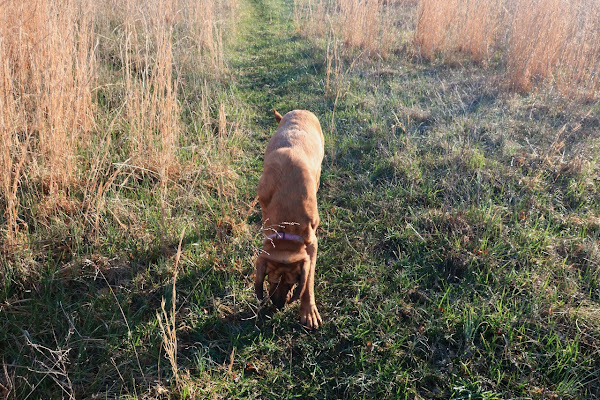 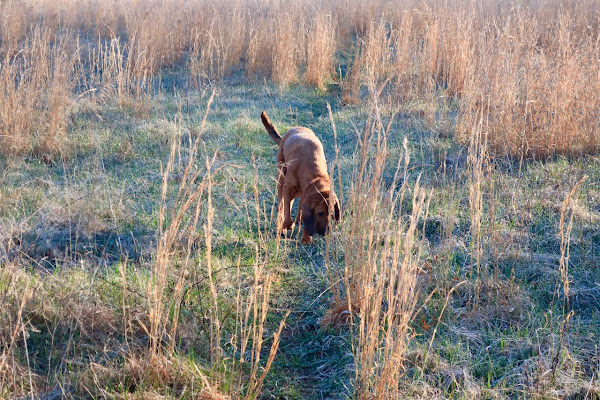 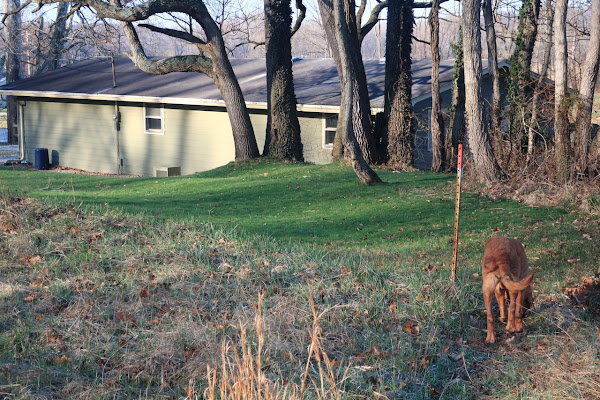 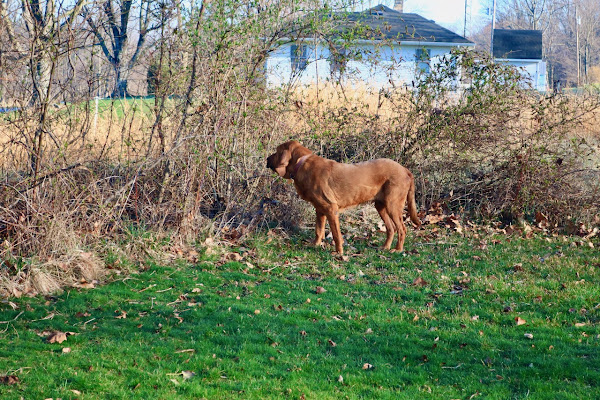 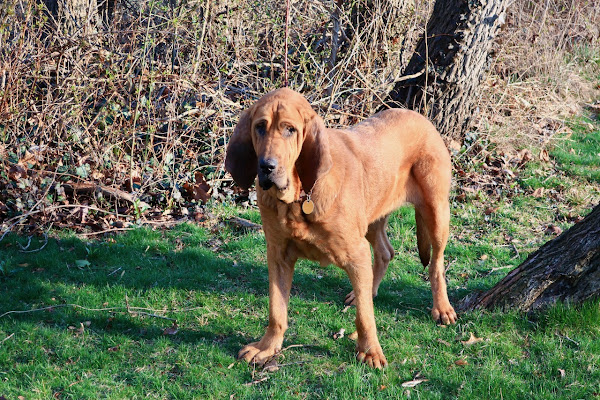 By the time I got here I decided I'd wait to post this. Who knew what might happen. I became highly motivated to clean the yard up with a little raking and picking up every stick, stem, twig or limb from the highway all the way to the field.

Heidi let me know the reason for me not bothering with that stack of leaves. She found it to be the perfect bed under the sunshine to sleep while I worked. I had Stella on the long cord that is anchored in the field. All she did was enjoy the sunshine and slept the two hours I was outside. 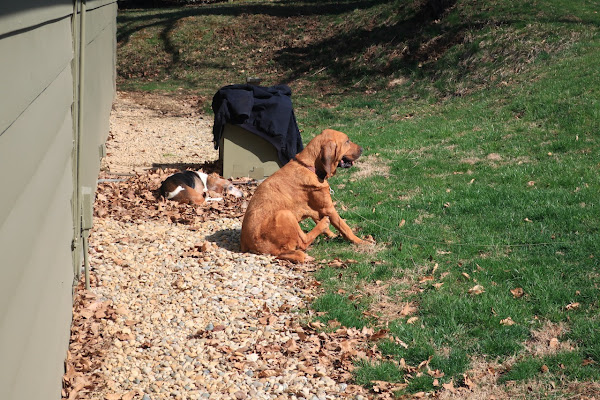 I had one more job after cleaning the yard and that was get rid of those leaves along the back of the house. I moved them around the corner of the house and burned them. No chance of having them blow back into the yard during the next storm. 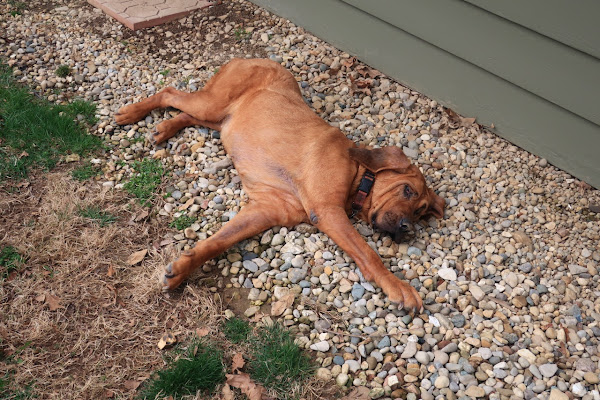 I was finished with everything by 11:53am and found out the Reds game did not start until 12:30 instead of noon. Either way it was perfect timing. I had time to clean up and fix something for lunch. I had all the windows in the house open for about an hour before deciding that 57° outside was just a bit too cold to leave the windows open.

It was good to be back outside working in the yard for the first time this spring in 'the tropics' of Southern Indiana.
at April 03, 2019