The Hounds Enjoy Their Weekend 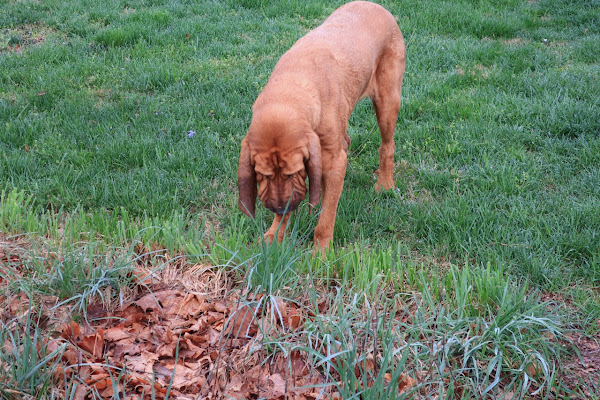 First of all I hope all the blog readers that experienced tornado weather yesterday that moved through the south made out okay without any kind of damage. We had nothing like that yesterday but woke up this morning to signs of heavy rain last night while we slept. These first few pictures are from an exciting Saturday ... as you will see the hounds didn't do anything different from any other day. 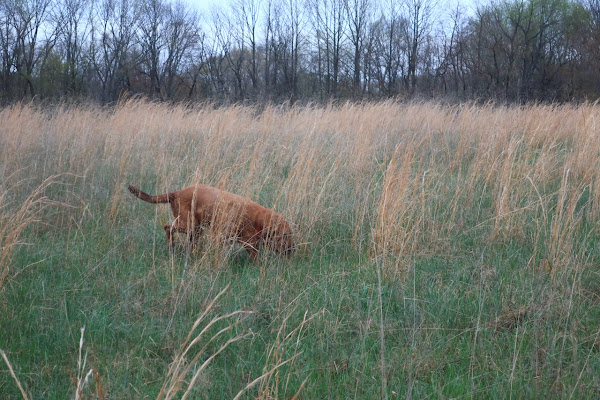 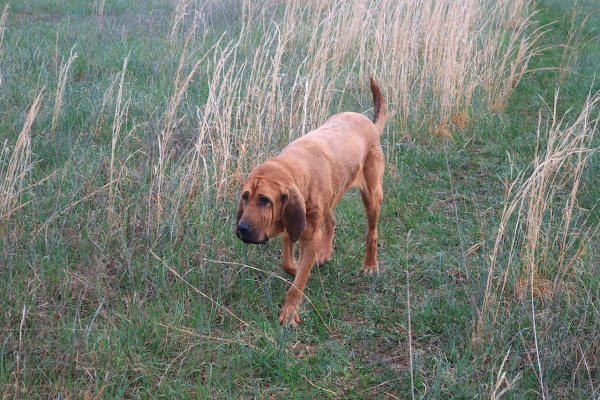 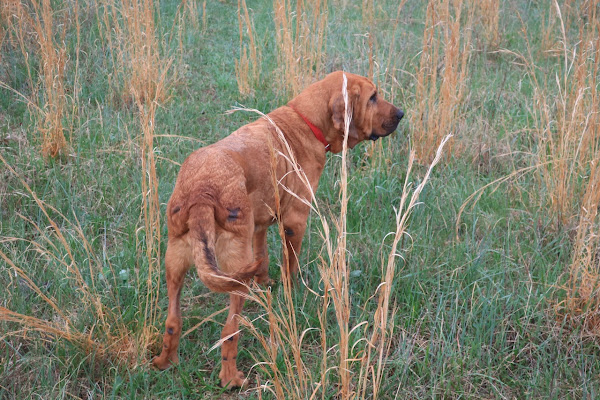 Stella and I had a good Saturday morning walk. I planned on posting just one blog post Saturday later in the day, thinking I would get some activity from Heidi. That did not prove to be a correct assumption. She didn't do much, didn't want to do much and following her lead ... Stella and I ended up not doing too much on Saturday either, with great weather outside. 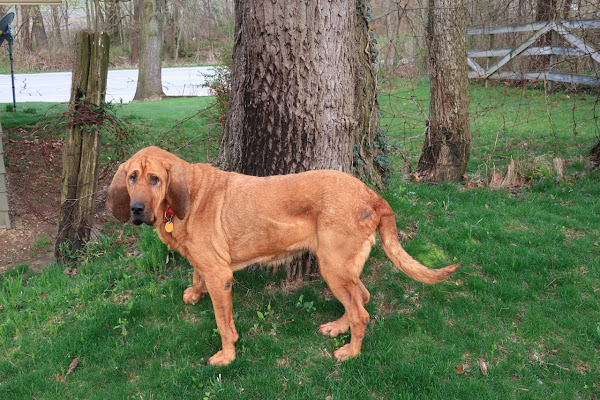 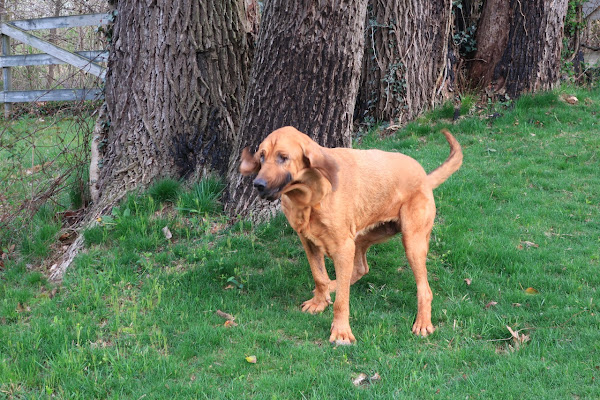 With a weather forecast of rain most of next week I was going to mow the yard while it was dry. In some spots the grass was tall enough to mow but I knew if I waited another two to three days after the rains, then it would be too tall to mow with a lot of excess grass lying around. After seeing some water standing in the field this morning and my neighbor's culvert I was happy I mowed yesterday. 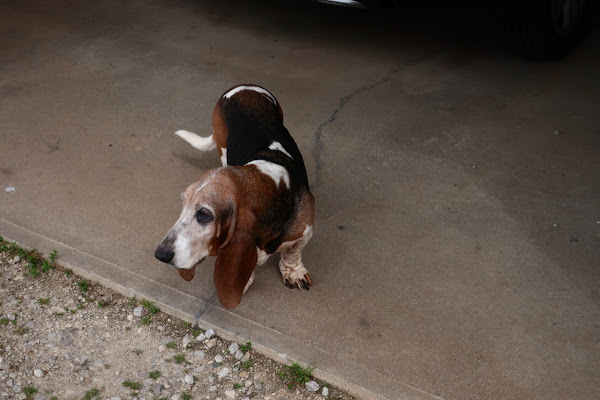 Like I said, Heidi didn't do much yesterday. Did that short burst of sprinting and getting airborne on Friday afternoon take that much out of her? She spent a little time outside after her lunch but wasn't interested in anything else besides sleeping the rest of the day. She had to get ready to watch the Reds game at 7pm. I decided to spend the day reading books. 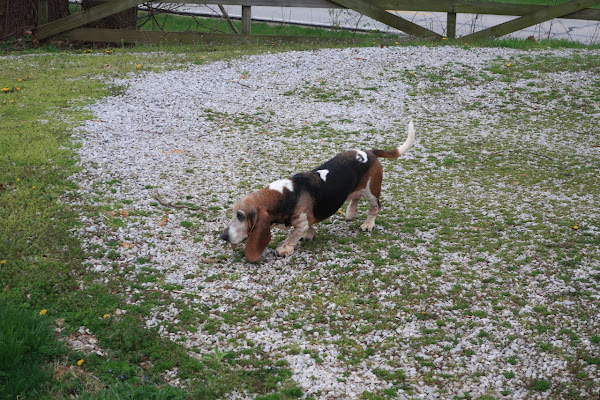 Stella felt the same way. Took a look around, then turned to head back inside. She was in her afternoon siesta mode within minutes of stepping inside the house. 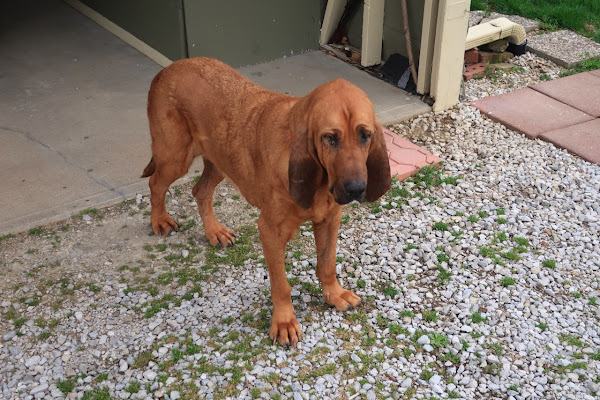 I never heard rain last night while I slept. I did close all the windows though because the temps were going to drop to the low 40's during the night. This is always a sign that it has rained a lot. The water comes from under the edge of the shed wall, yet when I sit a level on that carport floor ... it is level. 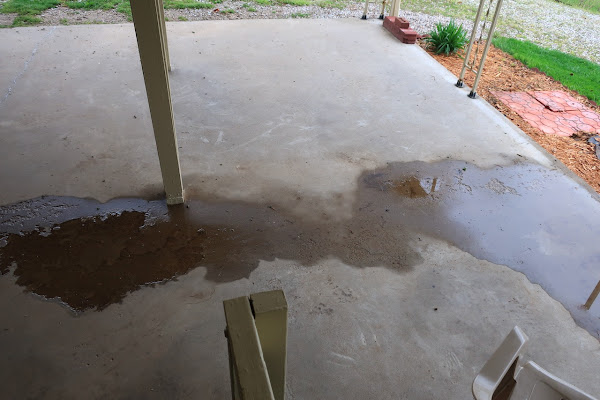 Even if the standing water is small in this part of the field I know by that, the path in back will be saturated under the leaves and there will be spots of standing water on the path the further we get into the field at a higher elevation. 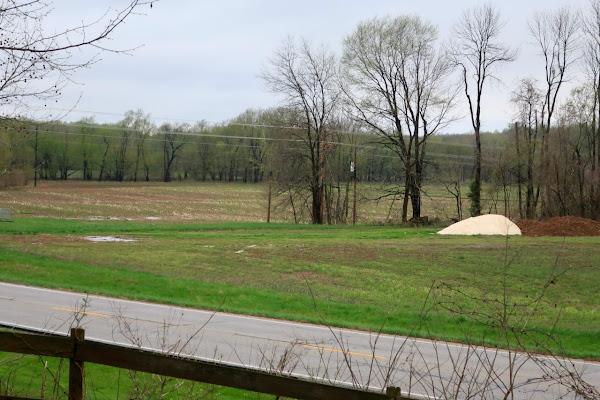 What a shock I had when I stepped around the car this morning. I had forgot to put all the stuff back in the shed after I mowed the yard yesterday. That just shows that we did not get back outside much yesterday afternoon and I evidently did nonstop book reading right up until the time the Reds game started. Only the mower was rained on. 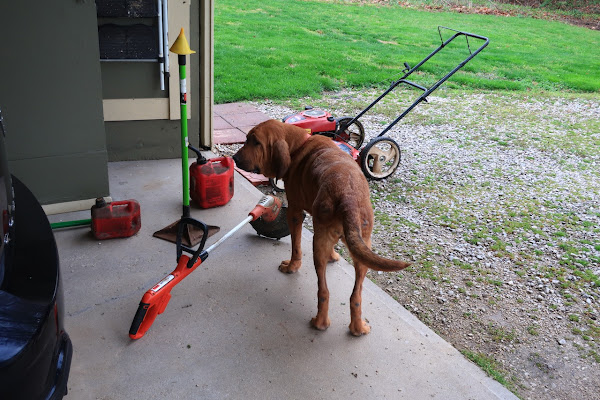 I was also a little surprised that Stella was going to go on the walk this morning. I took a step onto the path and had water coming up the sides of my boots, over the edge of the soles of the boots. With more rain on the way, about 40 miles west of us, we didn't have much time to get this walk in this morning. 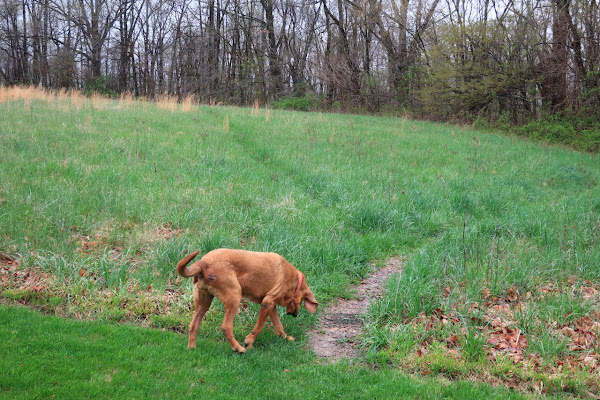 Stella didn't take long to decide the path was too wet and she moved off to the side as we started. The field grass is growing fast, faster than my yard is. 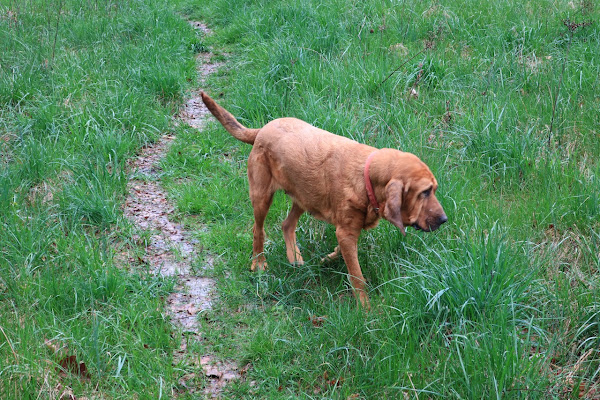 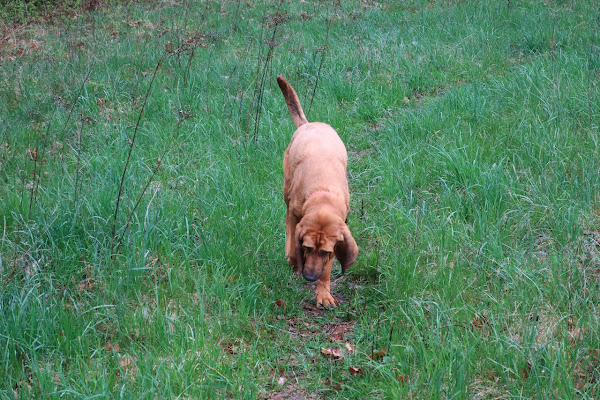 If the path was fairly dry she walked on it. Once it became to saturated with the rain water, she moved off the path just like always. She is smarter than the AKC thinks she is.  :) 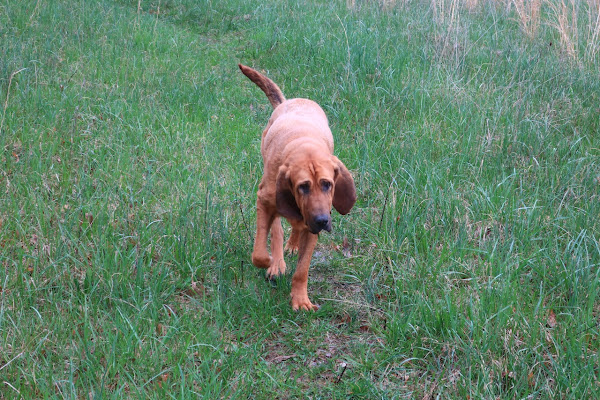 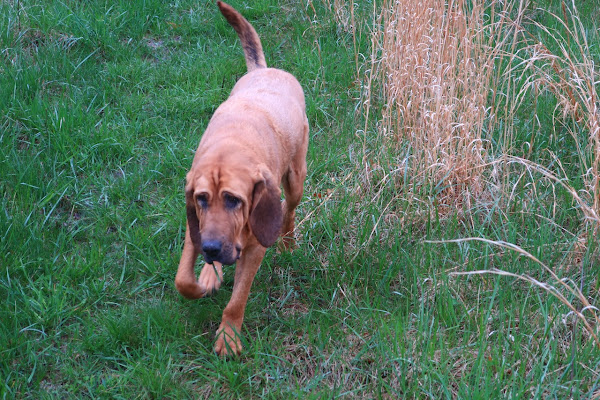 We are nearing the back of the field, about 40' higher in elevation based on facts from my Apple Watch, and there is standing water on the path. That is not out of the ordinary. 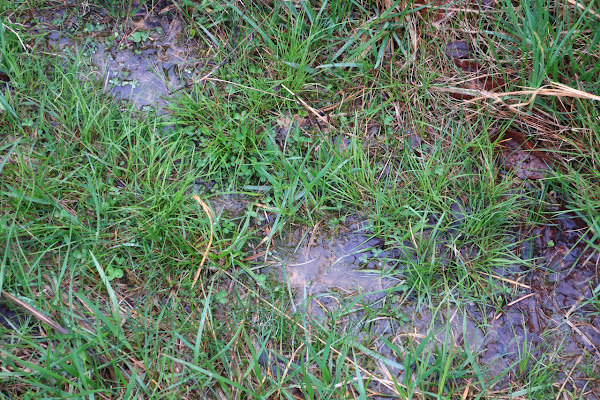 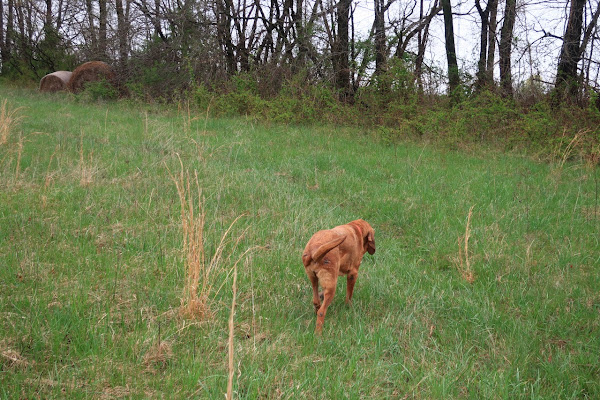 I made some minor adjustments today in my clothing. With it being 44° at 10am I went from summer clothes back to wool socks and a thermal long sleeve undershirt. I am a wimp the older I get when it comes to cold weather. It did snow lightly the first week of April last year so in comparison this weather is not bad. 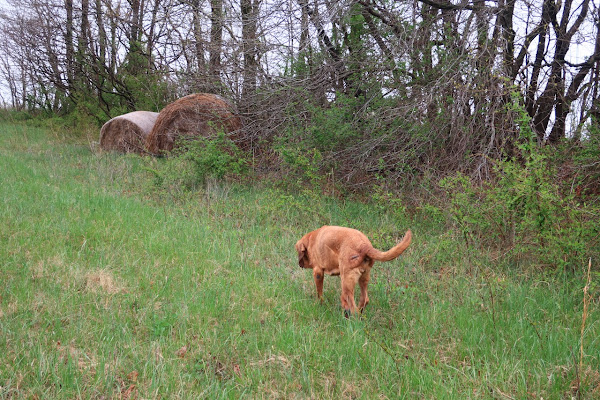 Stella didn't investigate a lot of scent nor did she eat deer scat this morning. She acted as if she wanted to get this walk over as soon as possible. Walking at a pretty steady pace we knocked off 3 minutes from our total time for the walk.

You might notice her collar has a slightly different tint of red. (faded) The other bright red collar I tried the other day was just too small for her. Late last night I opened the closet door in the kitchen where I have all the older hound collars hanging along with my three 6' leashes. I found a collar that was a little longer. I moved her current rabies tag to this collar and slide it over her head this morning.

She whines when I take the collar off of her as if she likes wearing one. So she was pretty happy this morning to have a different collar to wear. Heidi does not wear a collar until she makes a trip to the vet. Sadie and Winston didn't either 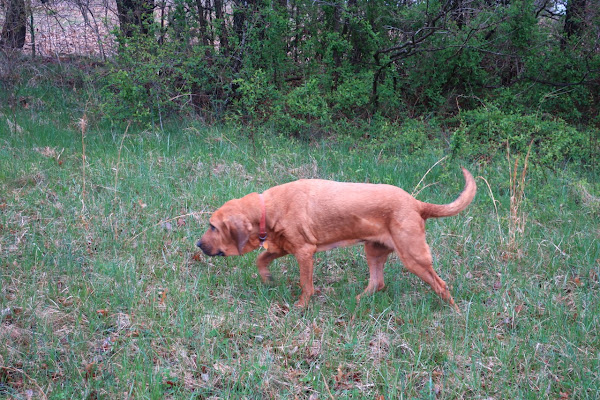 Most of the day is going to look just like this. With more books to read and the Reds starting at 2:30pm today, it can rain all it wants to outside. 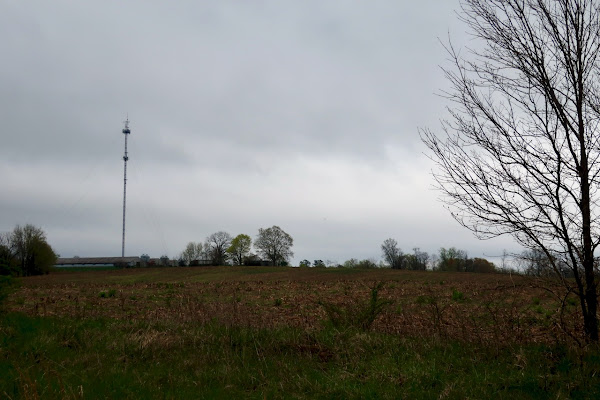 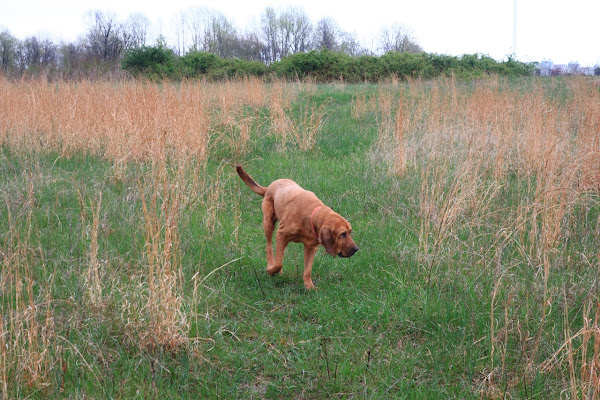 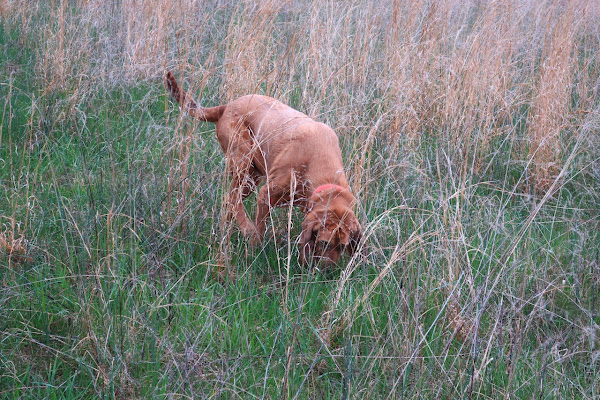 I've gained all the weight back I had lost a few weeks ago. At least I know the reason for that and my spreadsheet confirmed what I thought the reason was. One is eating 500 more calories per day, bumping it up from 1500 to 2000 range. Along with that is an increase in carbohydrates. Like I have said before, carbs and I do not get along, with added weight and slight indigestion when eating food that is called healthy.

I do best somewhere between Keto Diet and a Paleo Diet compared to a meatless diet or one with a lot of grains and fruit.

I thought we might take the older path home but at the "Y" Stella kept walking our newer path we started a few years ago. It's the one we take the majority of time and ends up putting her in the northern part of the backyard. 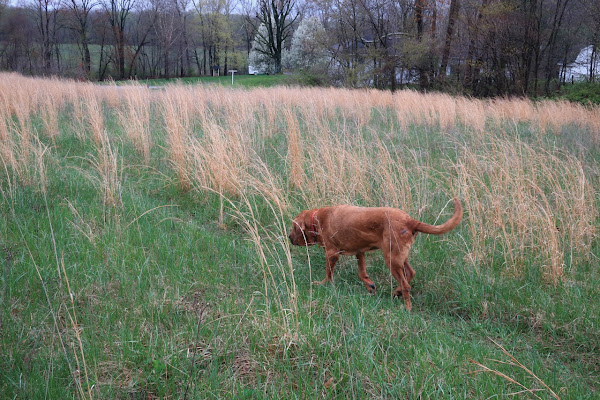 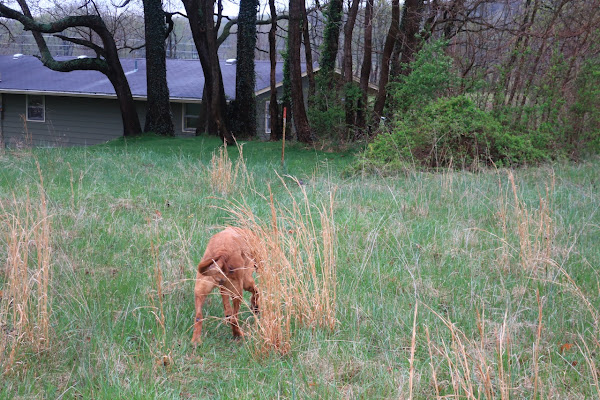 She got an early start of cleaning her legs up and didn't wait to get in the house to start her daily routine after a walk through the wet field. She will lick to dry her legs and all of her paws dry. I have not mowed the north side year nor this north section of the backyard yet. 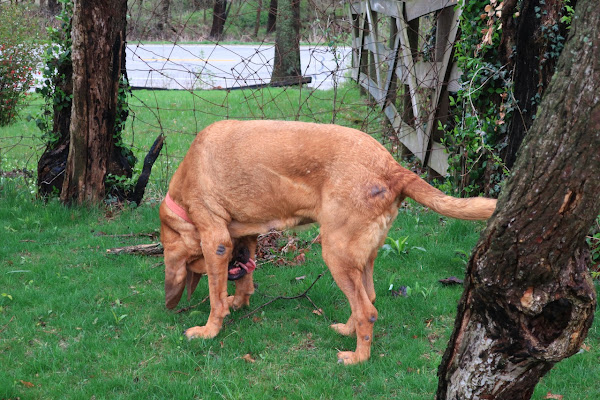 She was about as close as she could get next to the house. Closer than she normally does and I can only assume it's because of how wet the walk was. I still have not decided what to do about the area where the river rock is. Mulch or grass? 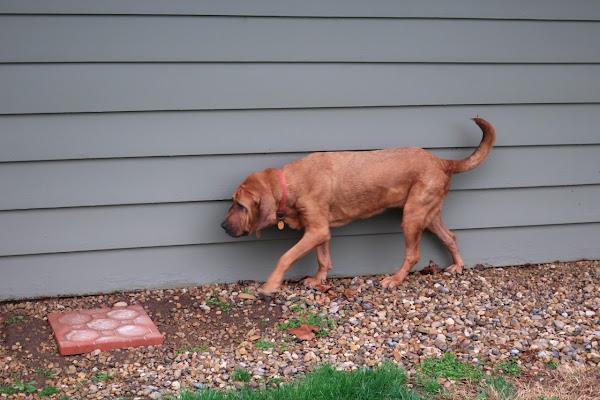 With temps in the 40's, a cool breeze and no changes predicted for the day, you can expect Heidi to do this most of the day. She does demand the sleeping bag though, even when she moves to the couch. I know that when she is staring at me shivering she is wanting me to bring the sleeping bag to her on the couch. 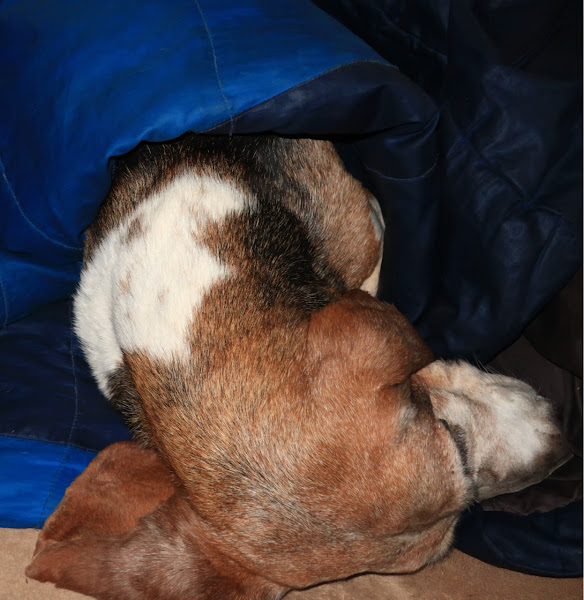 I heard about Trump's new idea for placing the illegal immigrants in the US ... giving them a bus ride to the sanctuary cities.  LOL ... isn't it interesting that those politicians that support sanctuary cities do not support that plan to accept them. I still say, the Democrats are 'giving' Trump a landslide win in 2020.

The NBA Playoffs have started I guess. I never watch the NBA and I can't even tell you who won the championship last year. For being a sports fan and a college basketball fan it is a little strange how I have no interest in professional basketball.

I found a Toyota FJ on AutoTrader last night that had everything I wanted in one but have not found that combination since I traded my first one in November 2017. It was silver instead of blue, it had the rock rails and the TRD package just like my first one had. The color and features are what I've wanted every since I traded that first one I had.

It is very tempting to make the drive to Northern Kentucky just south of Cincinnati to check it out ... but I won't. I remember why I traded my last Toyota FJ just last August. That lingering sharp pain in my hip joint every time I climbed into the seat. Plus I am on pace to drive less than 3,000 miles total for 2019 unless something drastic changes in my driving habits for the next 8 months. So what difference does it make what kind of car I drive, when I drive so few miles?

IF Heidi decides to shock me today and I can take some outdoor photos of her, I will and add those to my next post. That is highly doubtful but you never know with her. In fact this morning I woke up to her barking from the hallway ... that has never happened, ever. She sprinted to the door when I walked by her and then tip toed around the standing water in the carport to get just off the edge of it to pee. She has always been the perfect house dog.