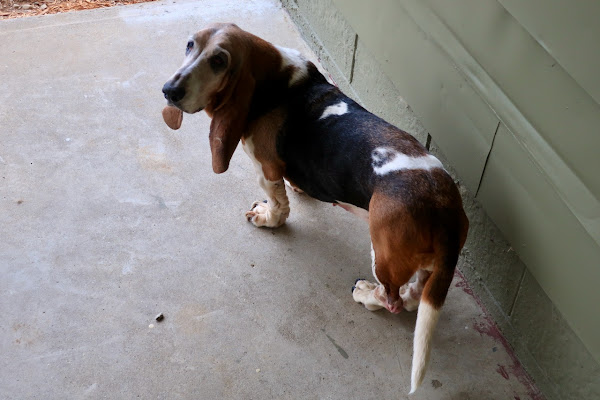 As you can see, today will not be much different than yesterday as far as outdoor activity for the hounds. The first two photos were from yesterday afternoon. Both hounds had relieved themselves first thing in the morning, in the dark around 6:38am but the day of rain really put a wrench in their plans afterwards.

Heidi eventually 'hid' under the overhang to do what she had to do and Stella held out as long as she could. She stood in front of me around 1am as I was watching the 9th inning of the Reds game to let me know she wanted to go outside, no matter if it was still raining or not. 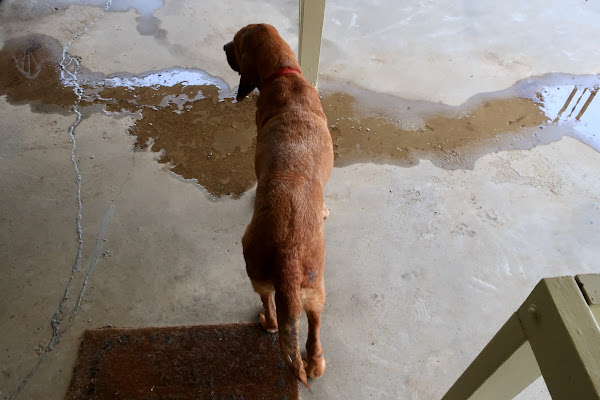 This morning was the same. It will be more of the same tomorrow. At least with all the rain all the grass, the fields, the trees and plants are recovering from the winter and growing fast and really getting green. 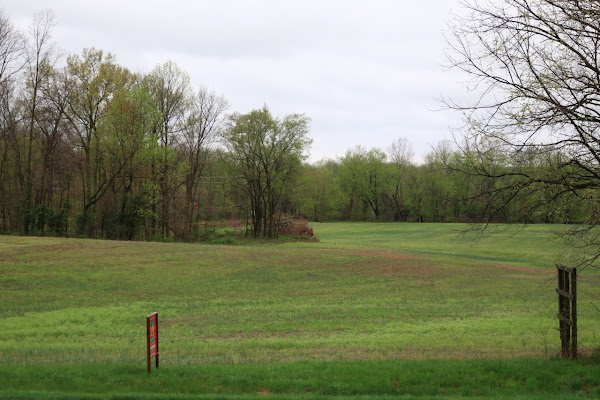 I told Stella we were needing some new photos for this blog post this morning. She literally stood right here, not wanting to cross the path of water nor did she try to walk around it ... she wasn't interested in going anywhere near the driveway under a light sprinkle of rain. 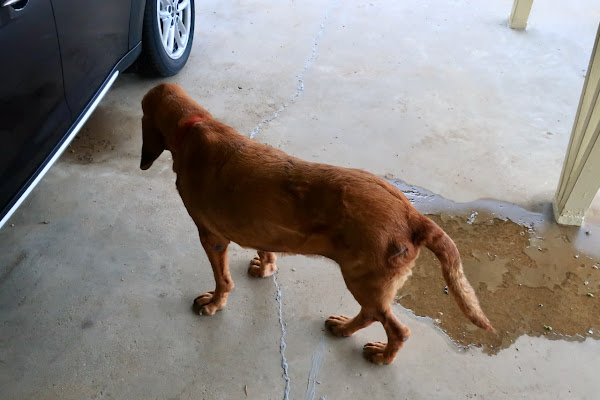 This always grows back nice after being dormant a month earlier. 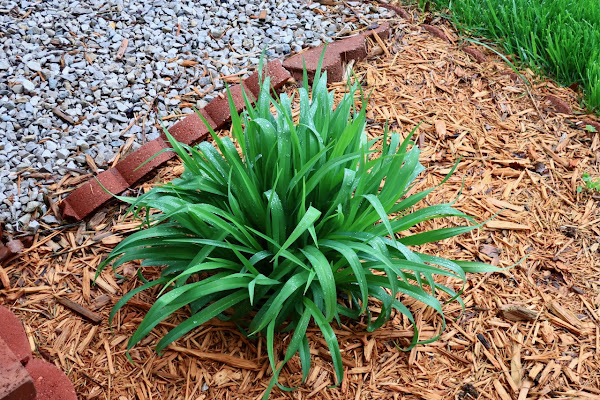 With a look like this, Stella convinced me to get back inside. With a high of 47° possible, I changed from cargo shorts back to fleece lined jeans. I don't care that we are well into April. Where's those wool socks I tucked away in my drawer? 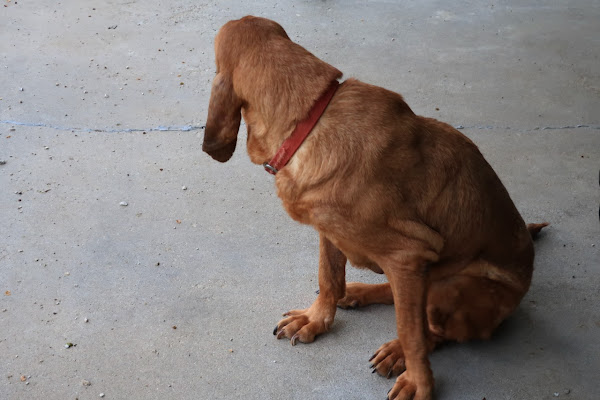 It was almost a year ago when my food insanity started. I was feeling like crap, feeling heavier than normal last May 2018. I stepped on the scales to see I had gained back all the weight I had lost the previous year and decided to do something about it ... like get serious. That is when all the spreadsheet tracking started and the food app where I logged in everything I ate or drank. Scanning a bar code on the food with the phone camera made it quite easy to do.

About a month or so ago when I was again seeing disappointing results I thought to myself "it is what it is, you're older and it's just what happens in life" ... thinking I'd go back to no apps, no spreadsheets, and then eat what I want when I want. After all, eight to ten months of trying to control calories, and the food I ate really was not showing that much improvement.

Certainly not enough to make it feel like it was worth my time.

That same feeling hit me a few weeks ago when I had regain the pounds I had lost the week before. Yet, compared to last year I was still under 8-10 pounds and from 2014 I was down 20 pounds give or take a couple. With all the logging of food and seeing how much fat, carbs and protein I was getting plus seeing that I basically inhaled 1200-1750 calories per day ... I didn't feel I needed to continue to log my food.

I did not need a food app nor a couple of simple spreadsheets to tell me that.

So by dinner time last night, around 6pm I had decided that today would start my new path ... eat what I like, eat healthy food, NO logging of food, NO spreadsheet data entry and no more monitoring weight, inches or millimeters of fat using those skin calipers.

It would not make a difference !!!

While I was waiting for my 10:10pm Reds game start time I was doing a little channel surfing on tv when I stopped to check out the tv show about the last days or hours of famous people who had died. In this case it was about Michael Clarke Duncan, the star in the movie The Green Mile with Tom Hanks. He died in 2012 of a heart attack, eating a strict vegetarian diet and was a workout addict.

It was just what I had talked about here a couple of times the past few weeks.

Long story short ... he had gone to a vegetarian diet about four years before he died because of some fainting spells and finding out he had a cardiac disease, where I cannot remember the name of it and am too lazy to look it up. The doctor on the tv show said his disease most likely started in his early 20's, leading up to a heart attack 35 years later.

That tv show was a few hours after I heard the notification on my iPhone that I had received an email telling me that Greg had made a comment on my blog post from Tuesday. You can read his comment here after you scroll to the bottom of the post. It's something to think about and I agree with.

He was basically taking the words right out of my brain, words that I had thought about an hour or two before his comment, a few weeks ago and the same thoughts a few months ago. It was good to read that maybe just saying 'screw it' was not insane after all. What I was doing with the food app, spreadsheets and a somewhat strict eating plan WAS insane.

It was like beating my head against a wall ... doing the same thing over and over again and getting the same results. You know, they say THAT is the definition of insanity and that is what I've been doing the past year.

So today is kinda a big day for me.

Habits will be broken. My thought process will catch the changes. My eating will not change much but those times I have urges for pizza or a cheeseburger will not be shoved to the side like I've been doing. Plus that "all you can eat" Chinese Buffet downtown will be back on my places to go list. The battered deep fried fish at Long John Silver's ... goes back on the list too.

The fact is I want to remain healthy, which I am based on my blood pressure and heart rate, no shortness of breath at anytime. I also know I will never be or get into the athletic shape I was in when I was younger but I have been healthy my whole live and never had any kind of health issues 66 years later.

I am not even sure that I enjoy riding a bicycle after all the thousands of miles I have ridden in my life. Those miles started when I was growing up, riding the 2 miles to town on my one speed Schwinn. Then riding further and doing some bicycle racing in my 20's along with the summer cross country trip to California and then up the coast to Seattle when I was 24 years old. I wasn't bad in my 40's when I was at home and not on deployments on aircraft carriers.

I could ride 25-40 miles daily after work and a 100 miler on Saturdays. If I was in town I would ride the Seattle - Portland ride every spring, 202 miles between 10 - 11 hours of riding. Yet in my 60's I lost that urge to ride. It might have been a lack of motivation as I got older or my sore knees as I tried to get in shape. Or it might be fear ... yes fear.

I see too many cars and trucks in front of my house going 55-70mph, running off the side of the highway onto the shoulder. Plus I see too many people when I am driving that like to text while they drive. I have a slight fear of ending up a statistic if I ride my bike in this area. A couple of local riders have.

I know and have always known that when my time is due it will happen. Very little in between now and then will be much of a factor. It's life, not a big deal. I would like to outlive my hounds, no doubt I will but I hate the thought of dying while they are still living ... sad to think of that option.

So ... I am going back to really enjoying life and not putting everything I do into a damn spreadsheet or a food app on my phone !!!!!