Heidi Attacks The Walk At Sunrise 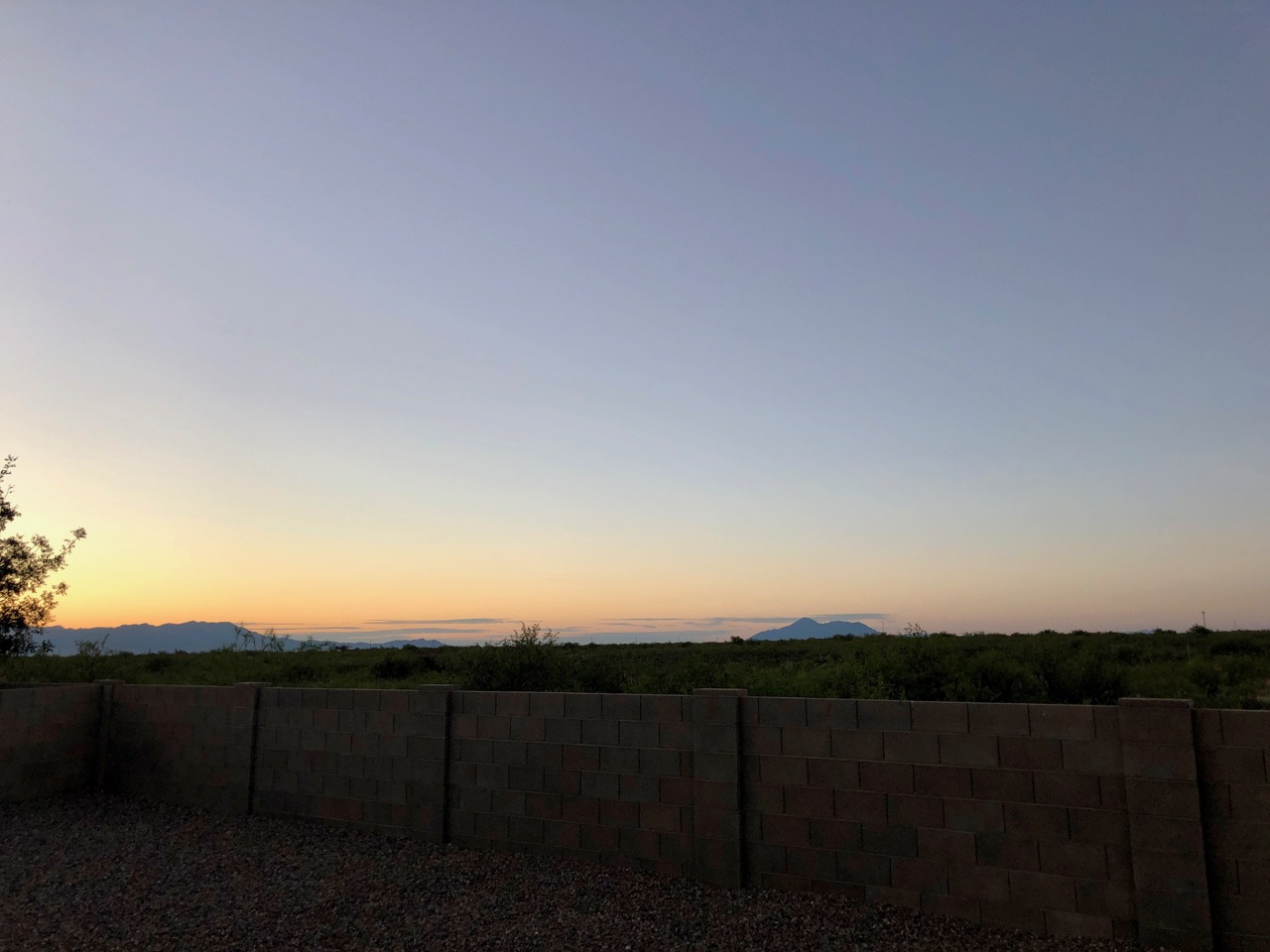 It might look like a normal sunrise but there were a couple of things happen in the background that made this day so much different. It started in the middle of the night, the bedroom lit up by the full moon and a whining bloodhound ... Stella. It was hard to tell what time of night it was because everything was so bright ... but it didn't look and didn't feel anything like it was time for sunrise. 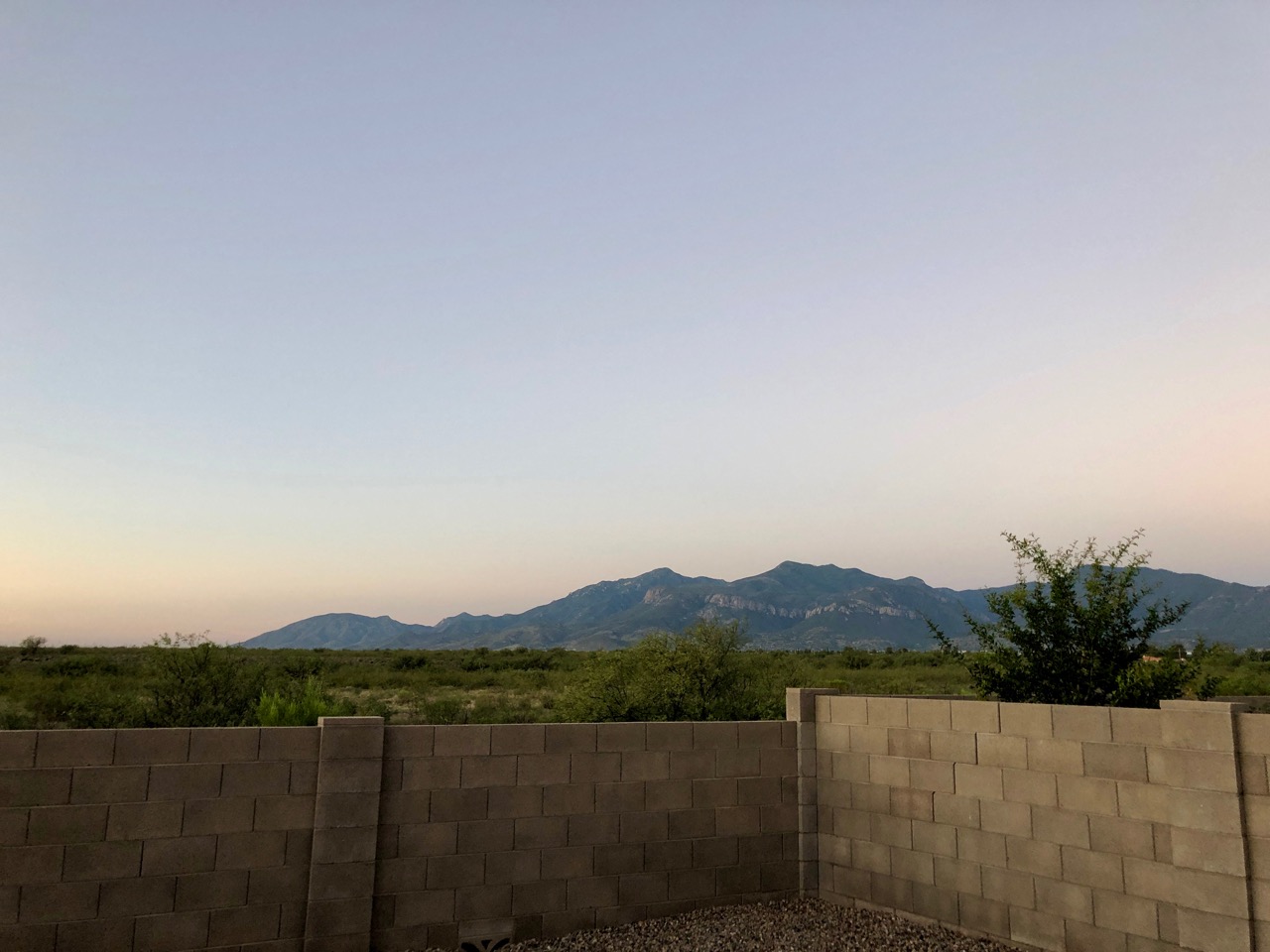 She wasn't going to give up on her request either. Time meant nothing to her and of course once Heidi woke up to Stella's tail wagging against the chest of drawers (on purpose) she was sure it was time to get up and of course have breakfast. After 15 minutes of telling them to go back to sleep I was the one that gave up. I flipped the light on and the three of us marched down the hallway, around the corner and into the kitchen.

Of course they always go outside first thing in the morning so out they went. I must admit the sky was awesome with the full moon making it feel like daytime. I poured the kibble out quick, shut the back door as they walked in, flipped off the light and headed back to bed by 3:30am while they ate their kibble.

What did they do when they were finished? 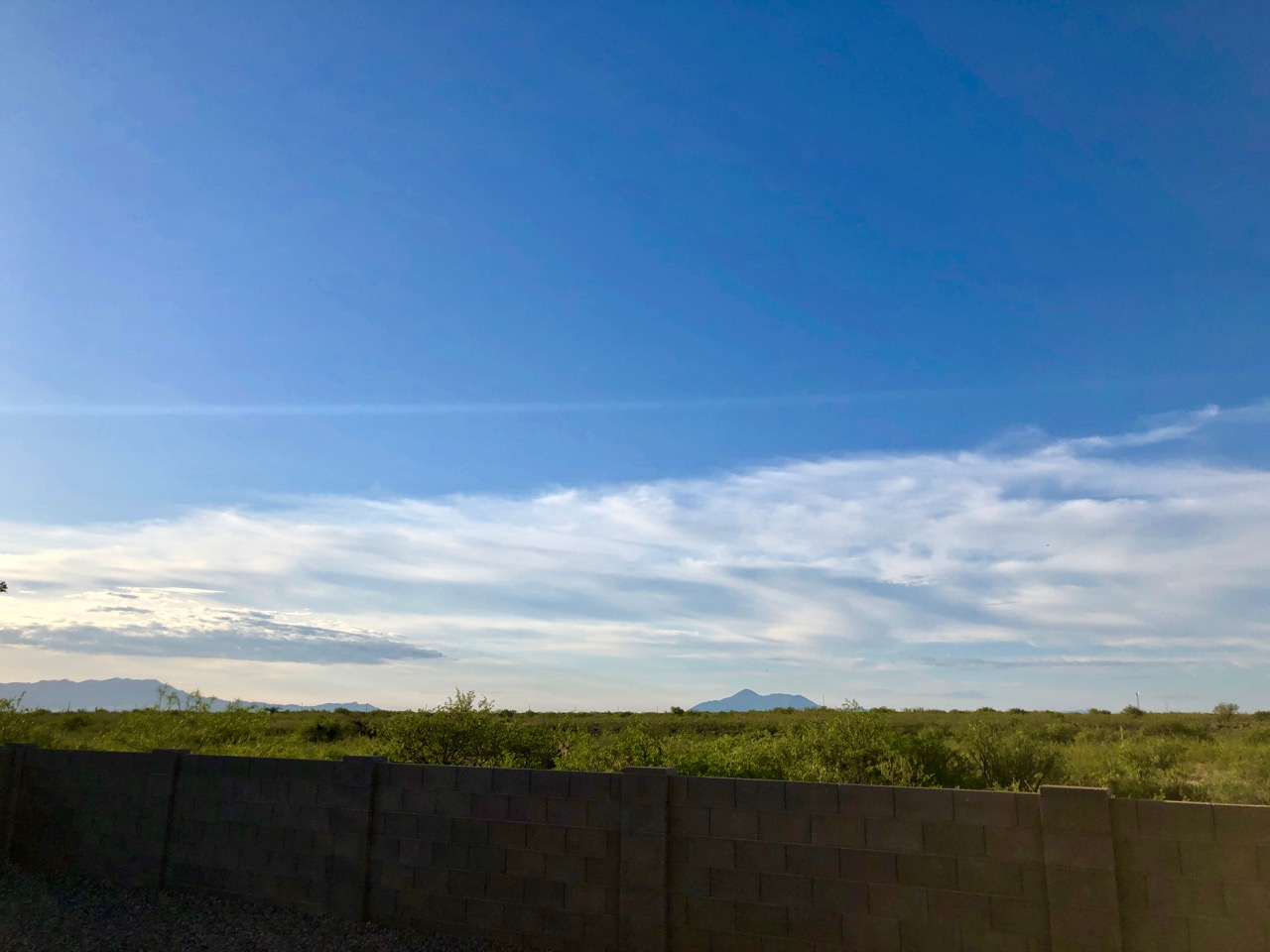 They came back to the bedroom, Heidi to her dog bed and Stella over against the opposite wall ... AND WENT BACK TO SLEEP !!!!  LOL

That did not mean all three of us would sleep late. We were still up by 5:30am witnessing another beautiful sky to start the day. Before coffee was even made I was putting on shoes to take the daily morning walk. Only things were different this time.

Instead of being back in one of her many sleeping spots in the house, Heidi was wide awake and standing next to Stella waiting for me to get the retractable leashes right after I pull a new poop bag off the roll and stick it in my pocket. I could not believe Heidi was wanting to take the walk with Stella and I. 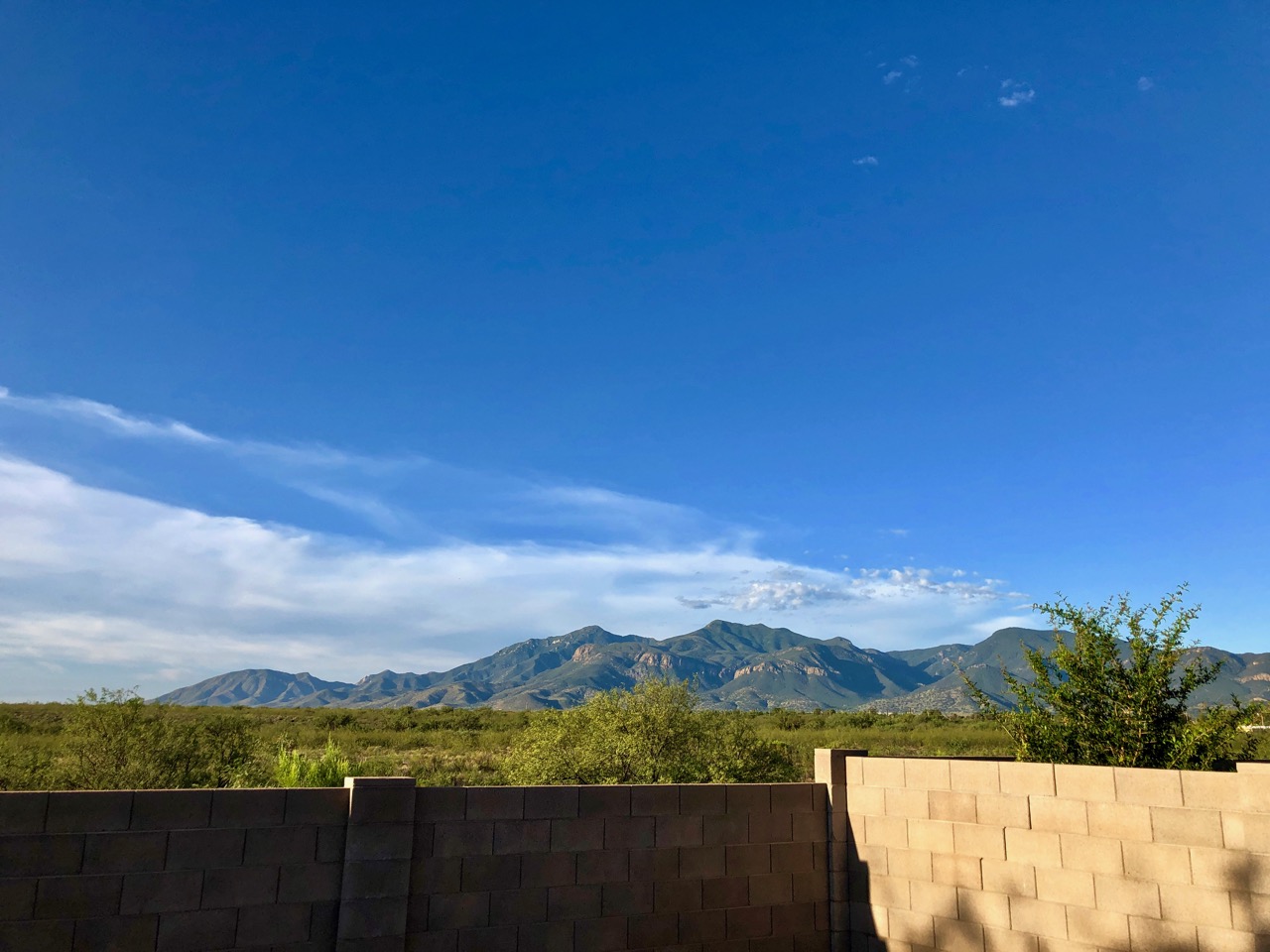 By the time we got back and I had finished my cup of coffee I could tell by this view it was going to be another beautiful day, all depending on when I wanted to get started.

With both hounds on their respectable leashes inside the house, a safety feature in case other kids or other dogs are taking their walks in front of the house, we headed outside with Heidi leading the way. Stella always like to stop a few steps outside to sniff the air to see whats up ... but not Heidi. She was practically sprinting for the sidewalk. 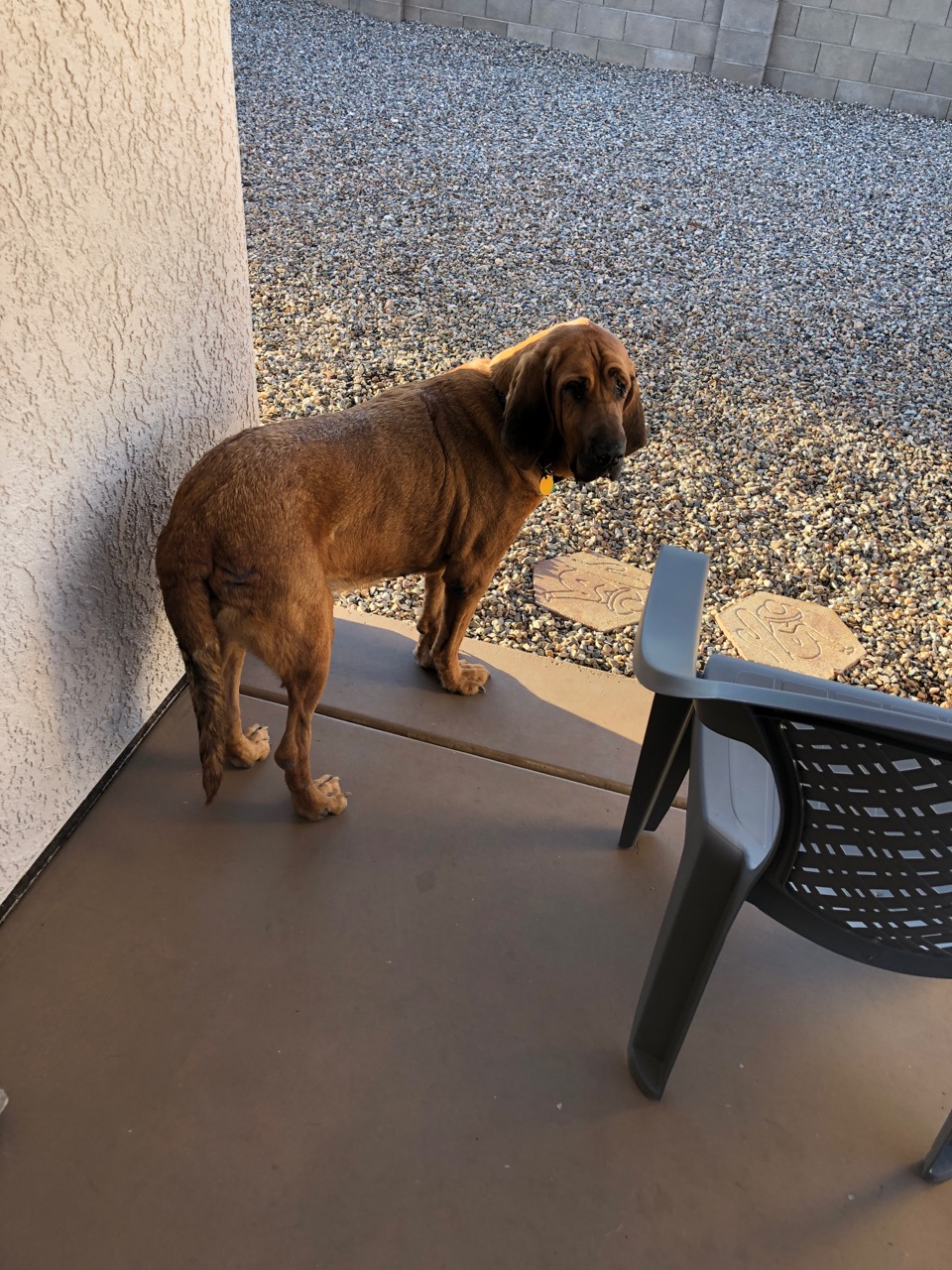 With only two hands, two leashes and a possible used poop bag, there just isn't enough room to take the camera. Heidi was in a 'trot' mode and wouldn't slow down for a walk. At first I thought she was trying to keep up with Stella who was leisurely strolling out in the street along with me ... it's a neighborhood and few if any cars are out at that time of day. I prefer to walk out away from people's yards as we head to the vacant land down the street.

Then I thought Heidi was rushing to a spot to pee but that wasn't it either ... she was in a fast walking trot ... as fast as those short basset legs would take her. After about a 1/4 mile and no let up on her fast pace ... it occurred to me ... before I picked her up from GABR 8 years ago she was known as a 'runner' ... breaking away from the house and running the streets and sidewalks until the local animal shelter would catch her.

I had to wonder if the surface under her paws brought back those distant memories of running away or away from someone chasing her and that is why she would not slow down to a leisurely walk like she use to do in the field. She did stop a few times after we got to the vacant land to sniff things and she eventually slowed her pace down to a walk, then to a very very slow walk. The watch said .6 of a mile by the time we finished. 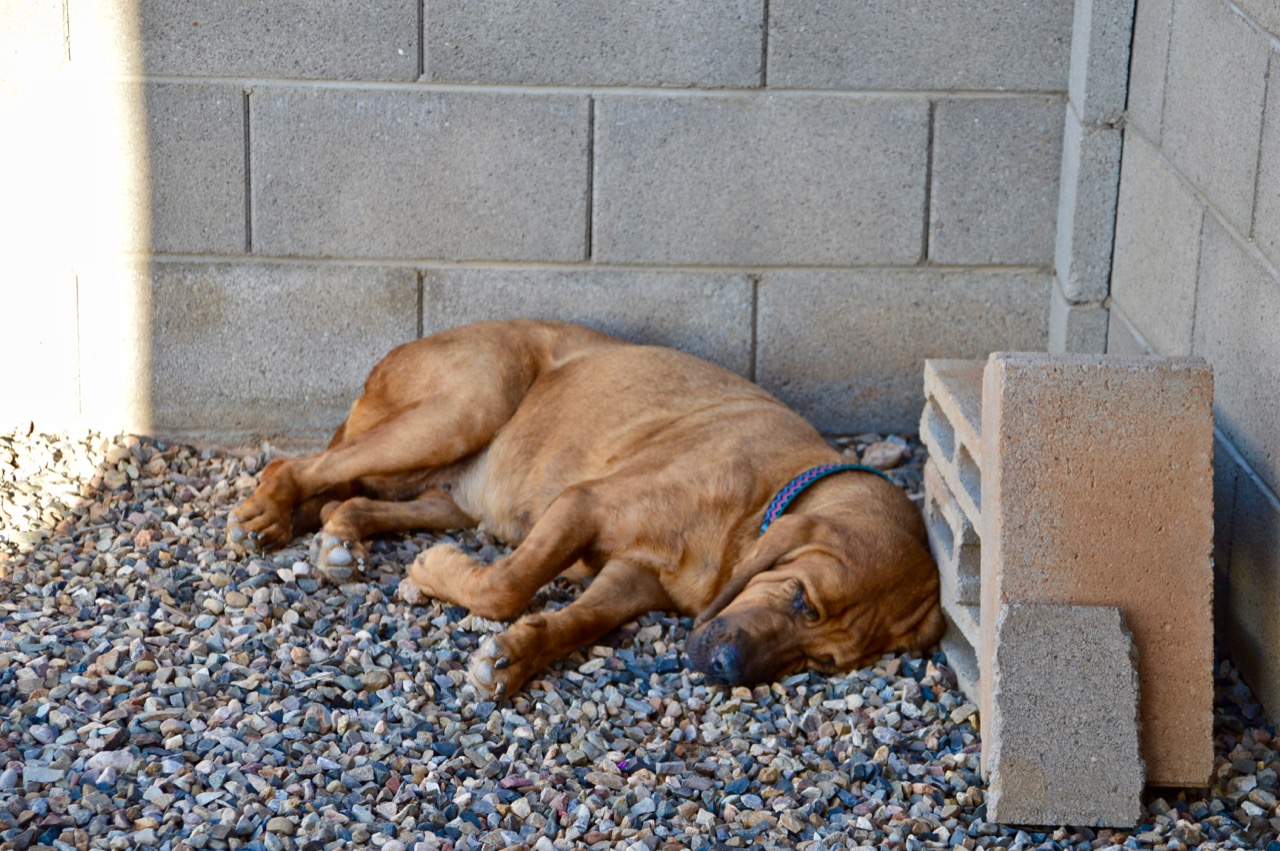 Stella thought the best thing to do when she got back was to take a quick nap outside while I got ready to do my morning bike ride. It was actually cool this time of day so those cold stones also felt good to her. 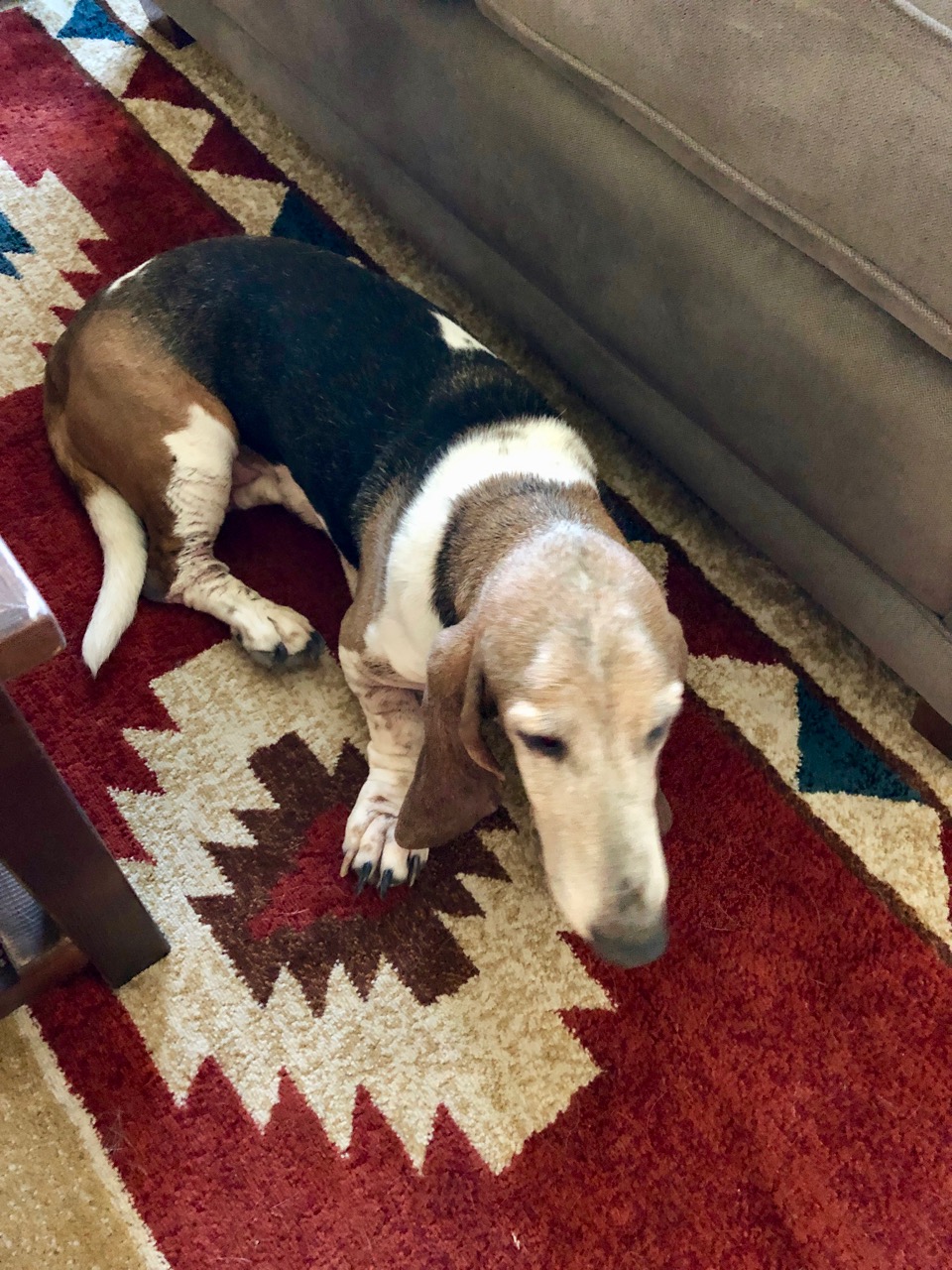 Heidi on the other hand got no further than the love seat after she walked inside the house and found the best place to sleep. She was still sleeping in that same spot when I returned an hour and a half later after my bike ride. It will be a few days or weeks before she has the motivation for another morning walk. 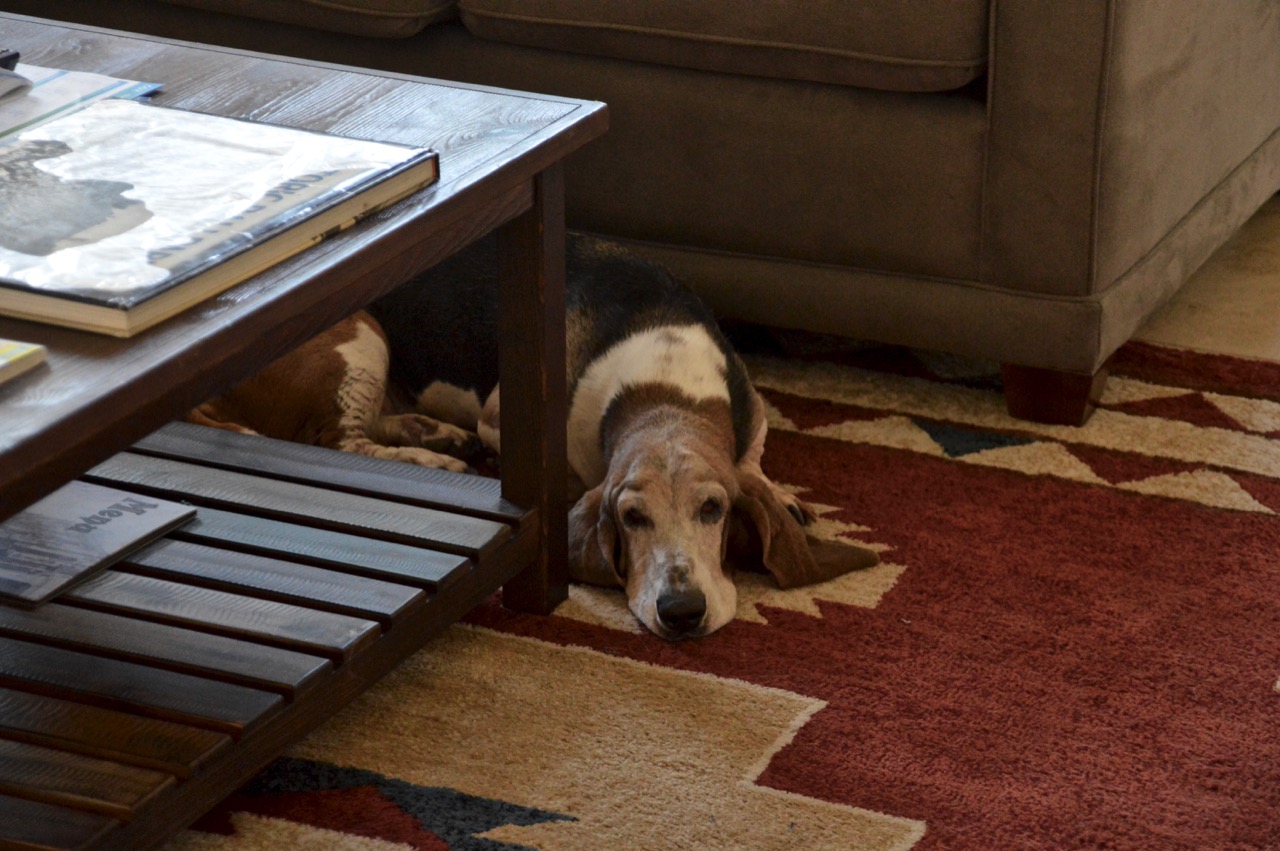 I didn't do any hiking today ... just a normal day around the house with a short visit to the dentist to get my teeth cleaned. After that it was to Fry's Market for some fruit, sour cream for the burritos tonight and a stop by their gas station to fill the gas tank up. Based on my awards for shopping at Fry's Market they were giving me 20 cents off per gallon of gas. Not a bad deal. 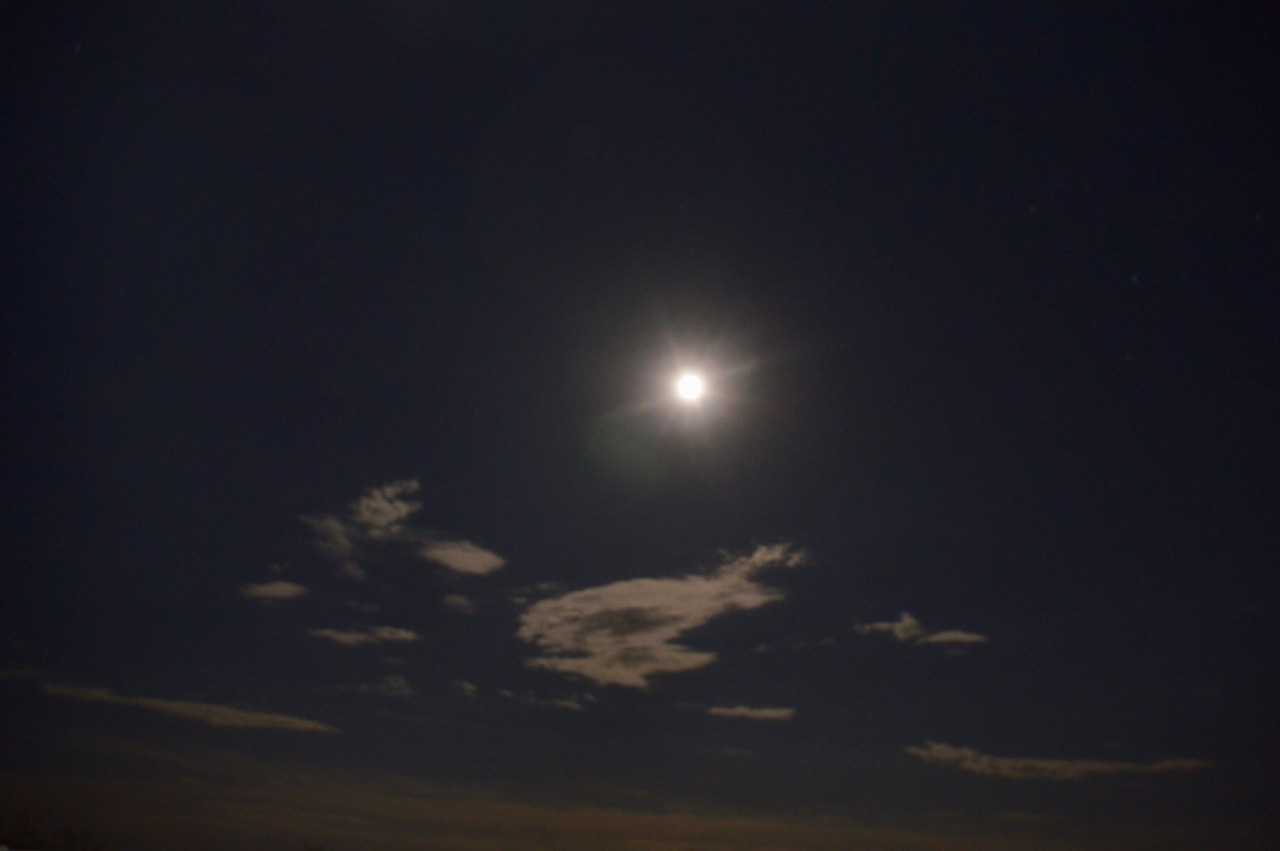 Like I said it is full moon time as all of you know. I did nothing for this photo last night except switch to a night time automatic setting and held the D3200 still in my hand. I'm surprised it came out as good as it did. 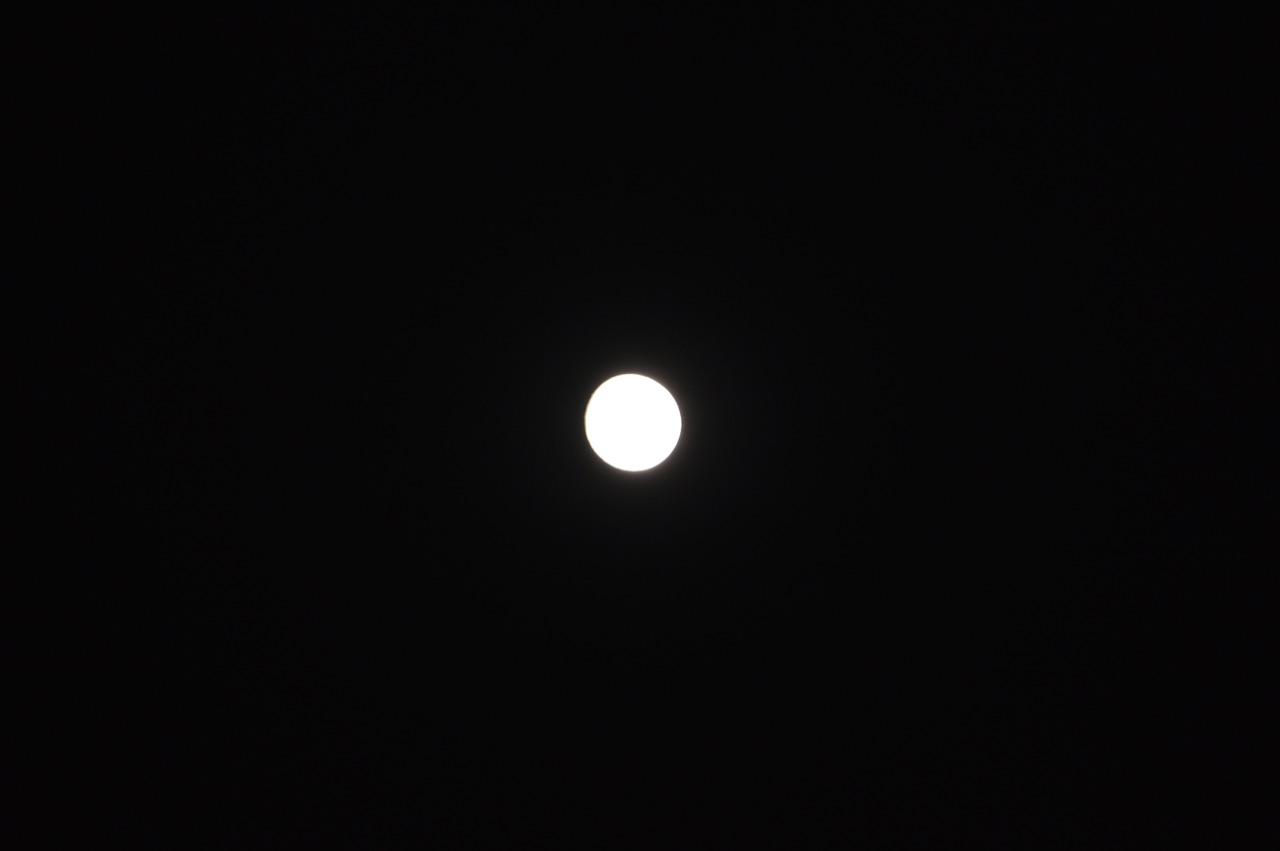 I changed the setting to full automatic, no flash and held the camera steady in my hand. That moon is about as full as you can get. I expect tonight to be much of the same and I can only hope the hounds try to sleep through the 3am hour and start bothering me around 4:30am or 5am.

That is the thing though ... IF I don't hear or respond to Stella's whining on any morning, then her next option to wake me up is to start wagging her tail of steel against the chest of drawers knowing that will be loud enough to wake me up and hopefully not the neighbors.

Awake too early but still another fine day here in the Wild West.
at August 14, 2019

Email ThisBlogThis!Share to TwitterShare to FacebookShare to Pinterest
Labels: Heidi Does The Walk, Heidi's Motivated, Stella Naps, Waking Up Early