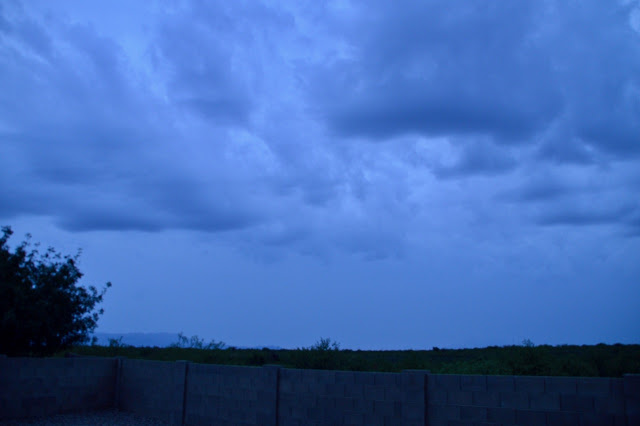 Once again this morning as we got up it looked like rain was just minutes away. Would Stella get her daily walk in? What about my bike ride? I decided to let time move a little, fed the hounds breakfast and fixed some coffee to see what was going to happen. By the first cup of Volcanic Red Deep Roast Stella and I decided to take off for her daily walk under dark gray skies and some wind. 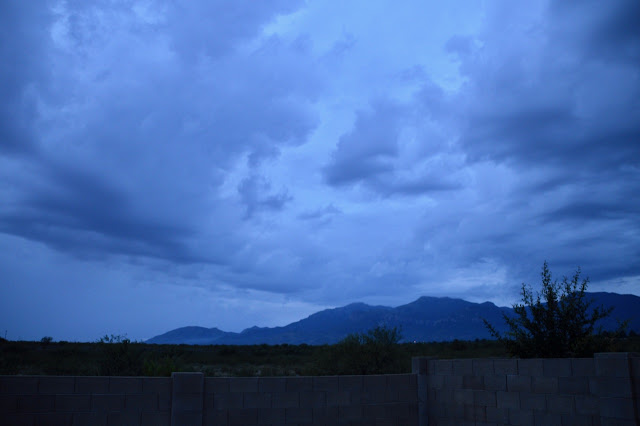 By the time we got back 17 minutes later things had not changed much. For once the daily forecast was showing possible thunderstorms early in the morning instead of late afternoon or this evening ... not really ... early morning, all afternoon and tonight is the prediction for rain. Yet it's was cool enough to open the windows, slide the blinds over and enjoy some fresh air all day. 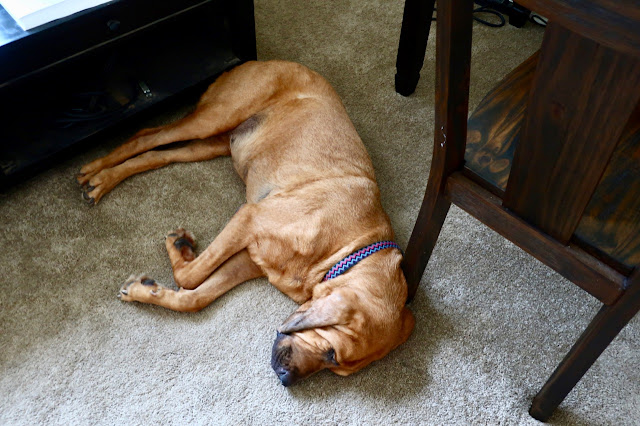 Stella decided the best thing to do in all of this bad weather was to sleep as close as she could to my desk chair so I could not sit down or if I did squeeze into my seat I could not get out. I saw a little white dried bloodhound drool on the chair after I downloaded the photo so it's time for me to walk around the house looking for dried drool spots to clean off the walls IF there are any. There will be. 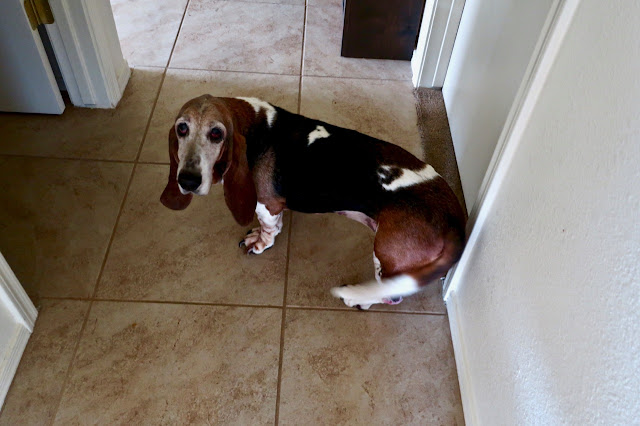 Heidi didn't want to sleep, didn't want to take a walk, didn't want to go outside ... she just wanted to roam inside today. I saw an open space of sunshine in the late morning and took off on my mountain bike for a short 12-13 mile spin around town, using the bike path most of the way. I knew there was a chance I might get rained on but all the heavy rain looked like it was south of us in the mountains. I'd head north toward town.

I was almost the the Sun & Spokes bike shop when the rain came out of nowhere and drenched me before I could ride the three blocks to get inside. I stayed inside there until the rain lightened up and then headed out in light rain for my 30 minute ride home. I was already soaked and knew I was going to get wet again ... plus with all the rain a lot of the streets were flooding along the sides and the intersections. 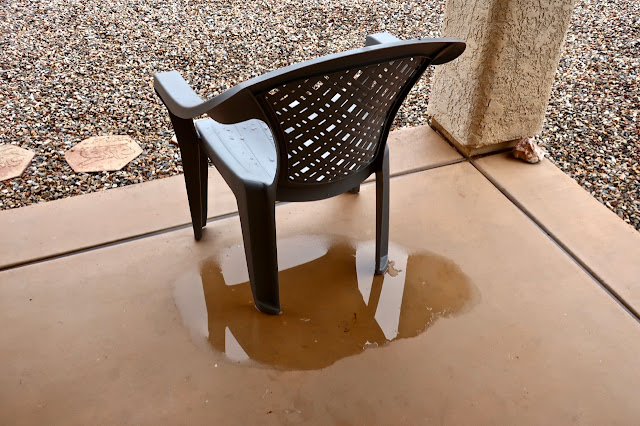 When I have this much water puddled around the ugliest chair in the world, I know it rained a lot while I was gone. It was time for lunch for the hounds and I. For some reason I had the urge to eat something healthy besides a cheeseburger and fries so I postponed my trip to the diner south of me on Hwy 92, then ate at home. 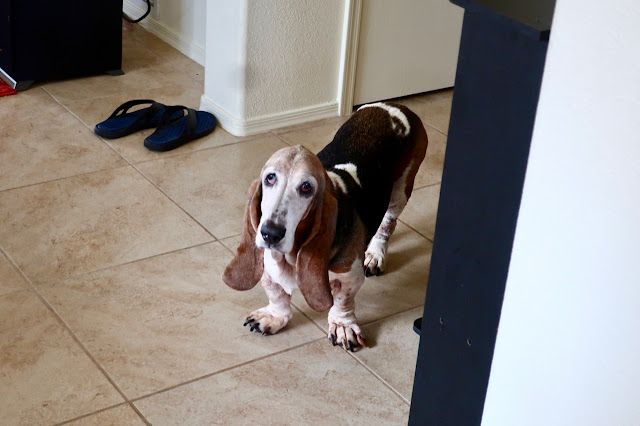 As the afternoon progressed, the hounds slept, moved from spot to spot to sleep even more and then finally got up for a little aerobic exercise inside. 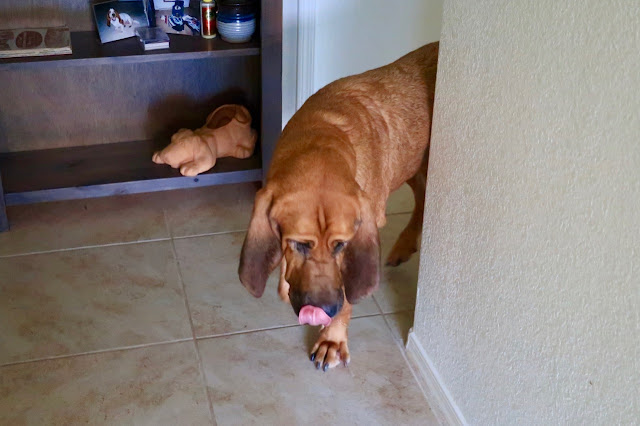 Stella came out off a deep sleep when she heard me in the kitchen. She was licking her lips and there wasn't any kind of food involved, maybe in her mind but not in reality. I was just pouring me a glass of cold water. 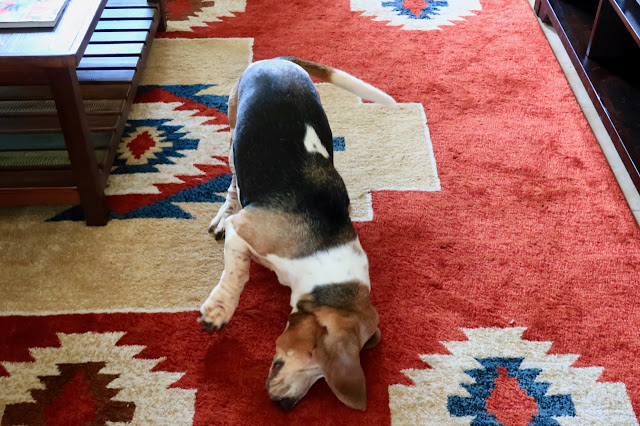 Heidi itched her eyes and ears on each side ... did a few 360° spins that my camera could not catch, barked a few times ... then laid down. That is usually the extent of her exercising everyday. She does do sprints around the house but that is usually late morning after I get back from bike riding.

I bought that rug to add a little color to a room with walls and ceiling painted the same color in a nice light tan. I like the colors they chose. One color throughout the house, neutral enough that I could add whatever color I wanted, where I wanted. 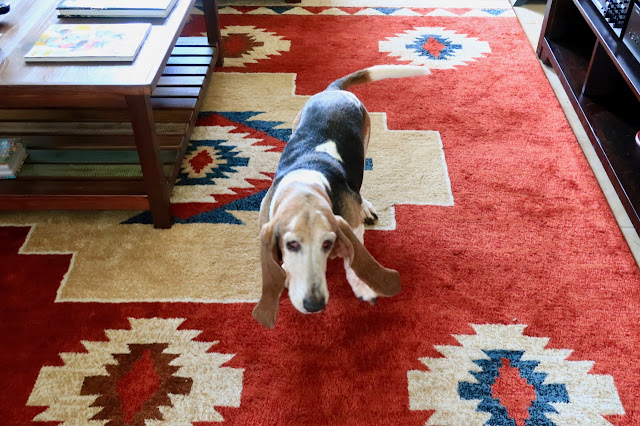 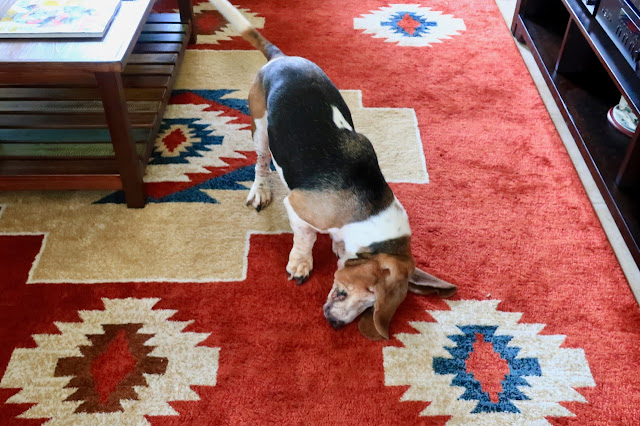 Remember while she is doing all of that movement she is growling to herself and just finished barking in the photo below. 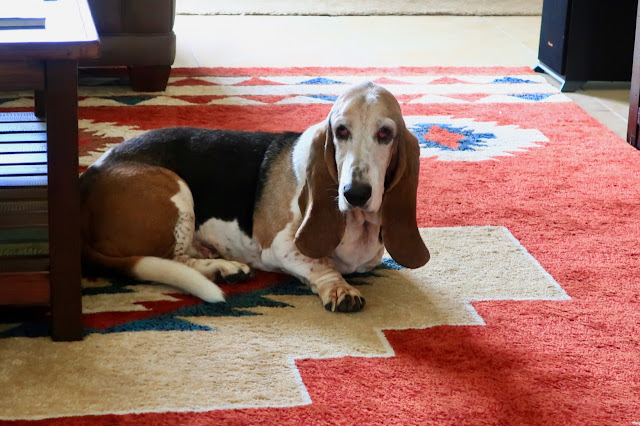 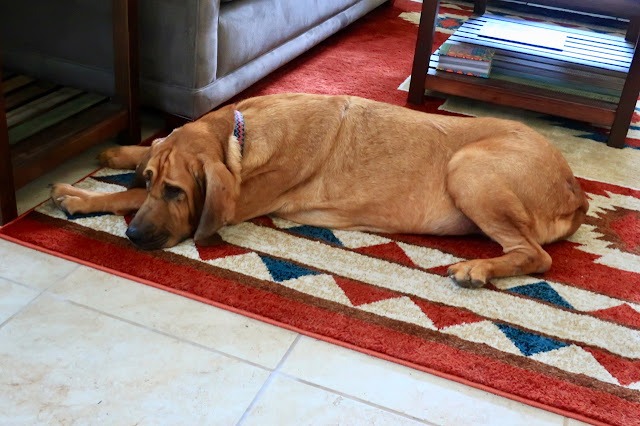 Even before the couch was delivered, this was one of Stella's favorite sleeping spots. It still is since she has figured out she is not allowed on the couch. 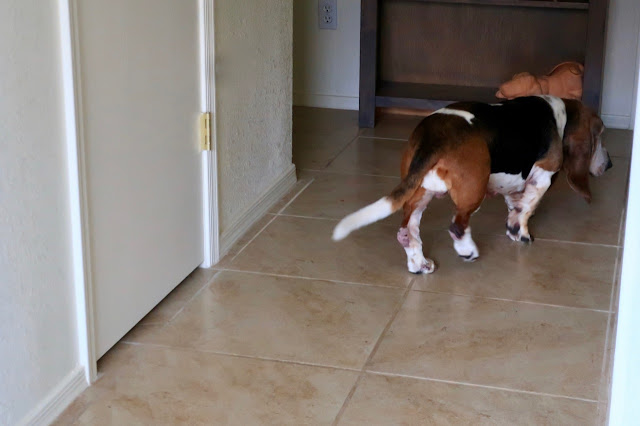 When I see Heidi walking this way toward her dog bed in the bedroom I know she is calling it a day ... she is still on Eastern Daylight Savings Time. Stella and I are on Arizona Standard Time. 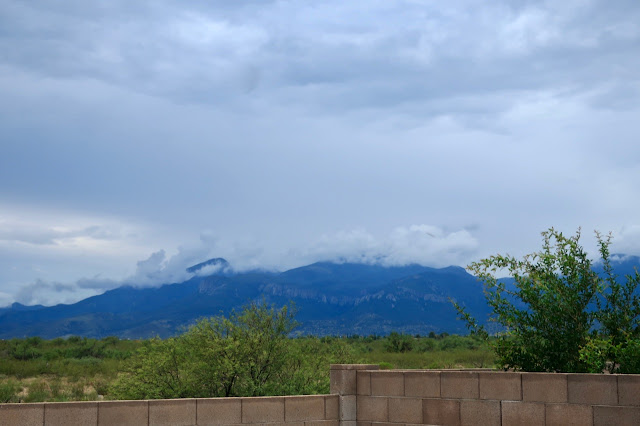 Getting close to the Reds game and it looks like more rain here. Hopefully it is not raining in Cincinnati Ohio. 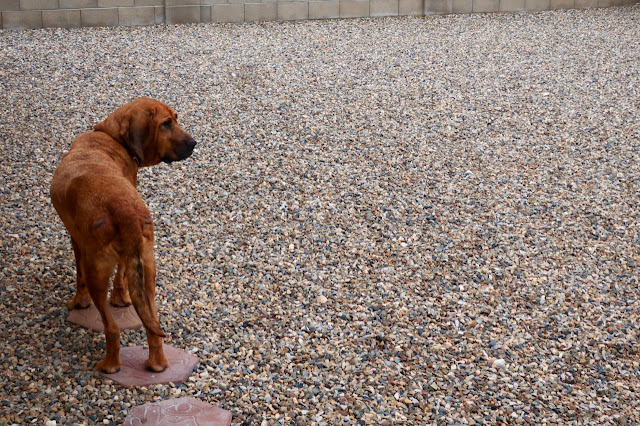 No sounds of thunder today, and the closest lightning strike was over 60 miles away based on WeatherBug. Stella decided to do an afternoon inspection of the backyard. 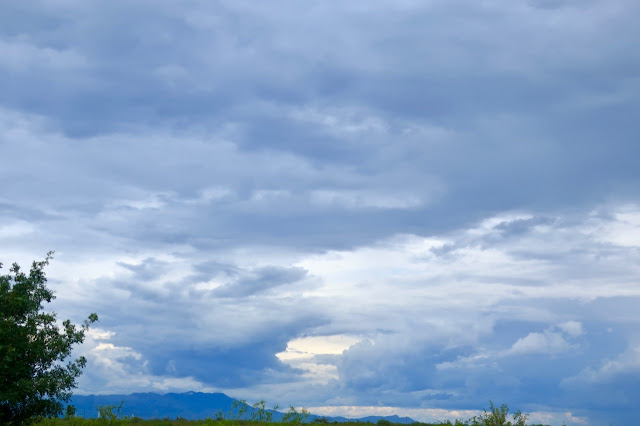 I could stand on my patio for hours and hours and take a million photos of the skies from the Mule Mountains all the way over to the Coronado NP. The skies are always changing. Yet there is one thing that I have never seen in the short time I have lived here ... passenger jets in the sky above me. 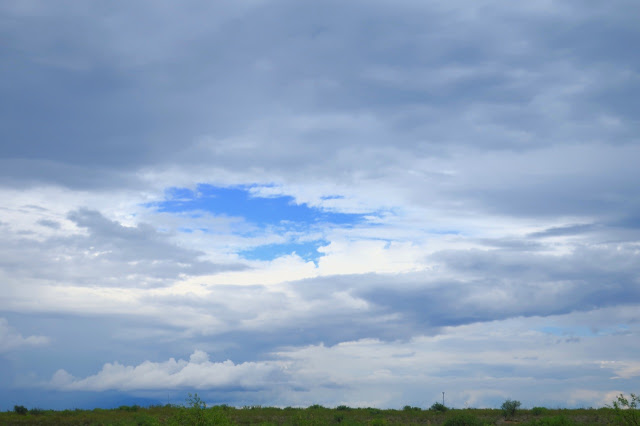 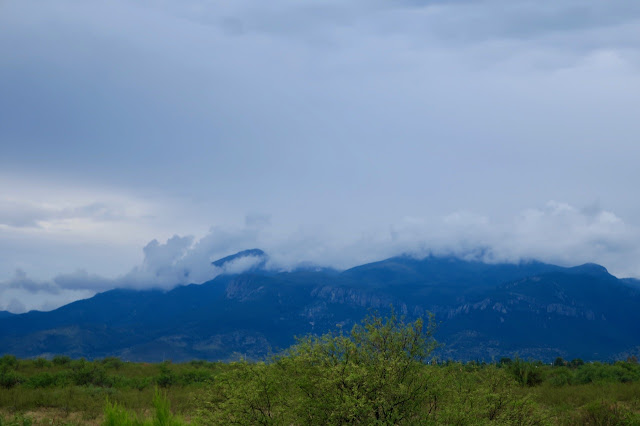 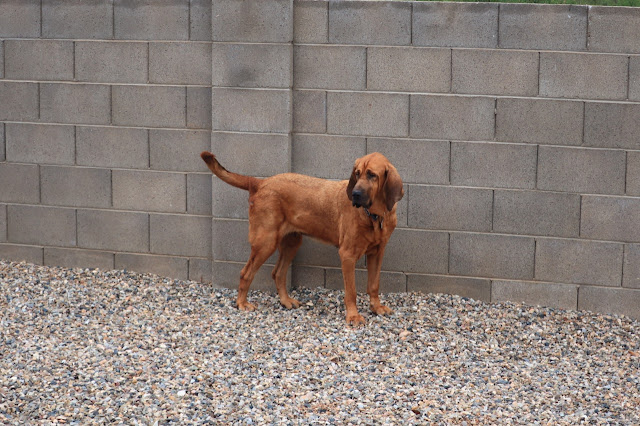 After some deep thinking, Stella decided there was nothing else to do but go inside. She will follow me to whatever room I sit in and lay down and sleep near me. I still need to do a post on her separation anxiety that increased a little during our move. That is a post in itself with all the stories I will tell and 'some' photos, not all. 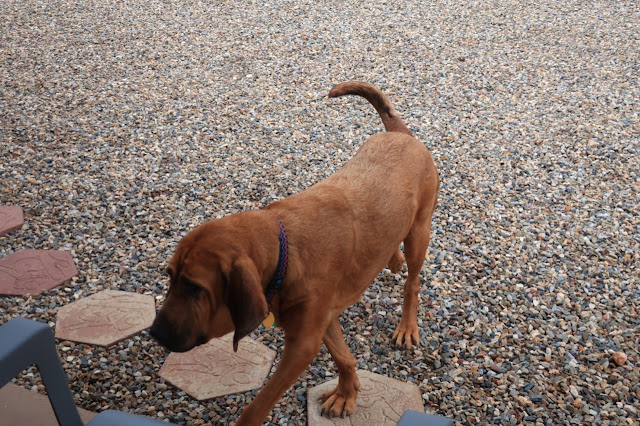 It really was a nice day in the Wild West. I hear it's Pirate Weekend down in Bisbee.
at August 10, 2019