The Hounds Take A Road Trip 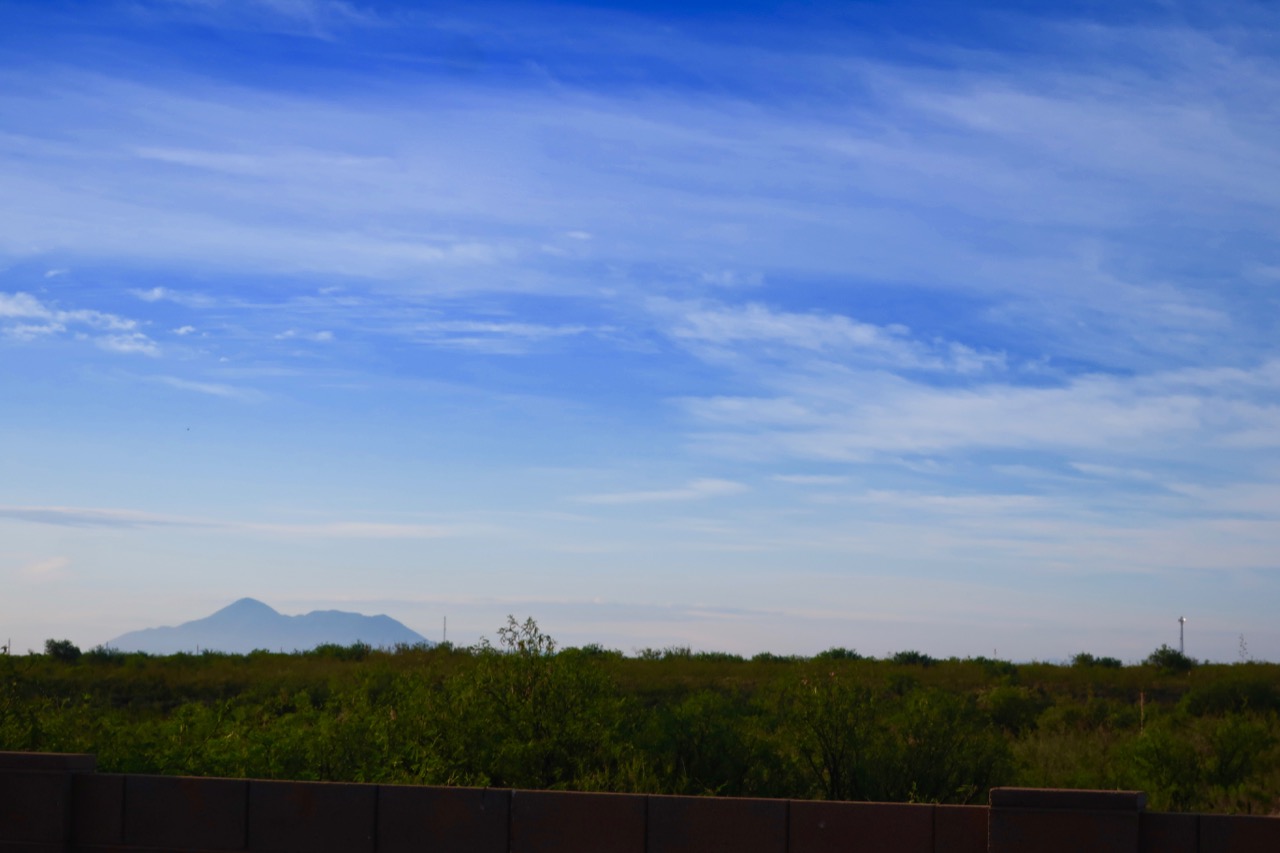 I was positive we were going to do one or two things out of three options today. It was the second day in a row sleeping late (6am) because I couldn't get out of my chair last night while spending hours outside looking at the sky. It was 11:45pm before I realized how late it was. Stella was sleeping under the light of the moon that had moved into her spot on the bedroom floor. 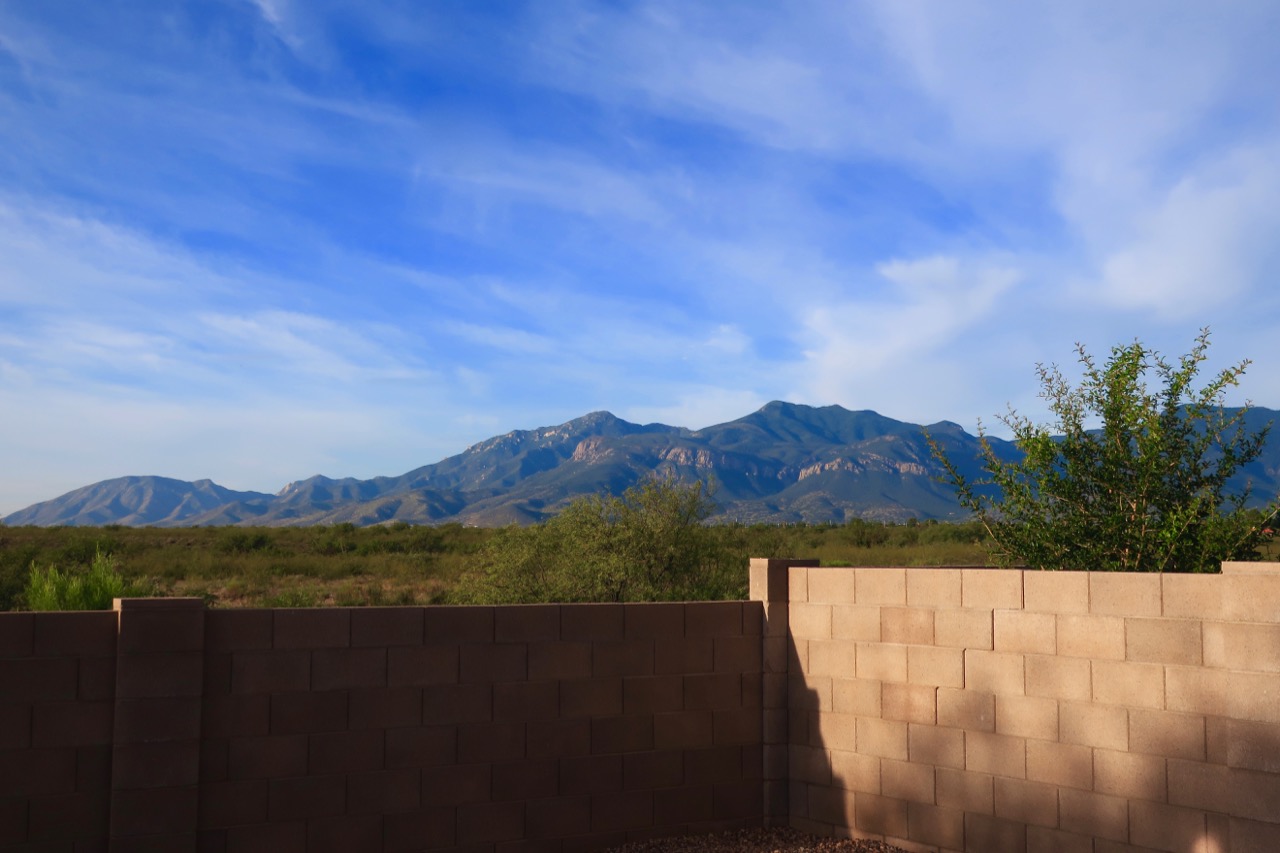 Although I was positive we were going to do something today, early ... that didn't mean I knew for sure what we were doing, so I had to decide quickly before 'analysis' set in. In an instant my brain moved from a short bike ride to hiking some trails in Brown Canyon. As I was moving some trekking poles, my small day pack and water into the car ... "ding ding ... ding ding" ... road trip!!! 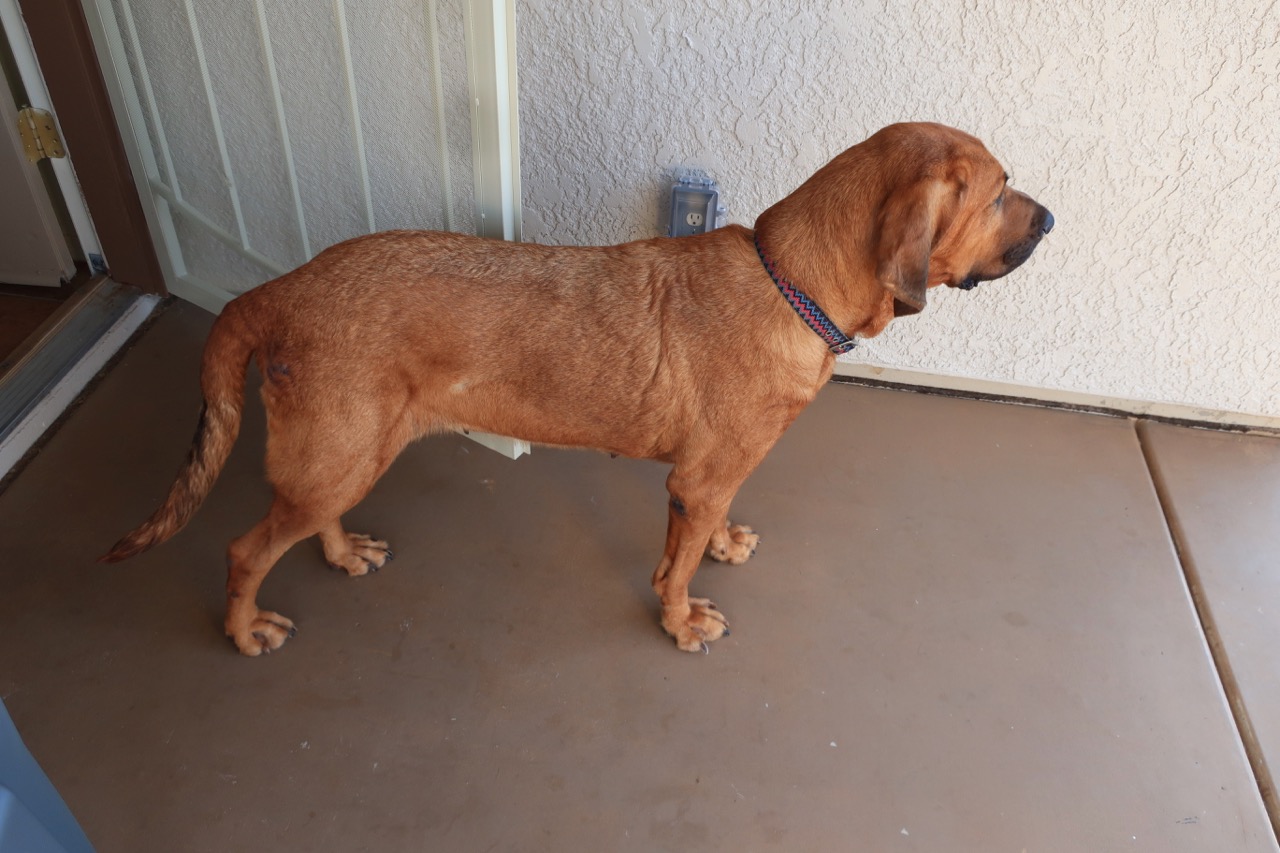 Stella also woke up late this morning and in fact didn't rise until I was outside drinking my cup of coffee. She likes to sniff the air to see what might be happening in her neighborhood. The birds have never bothered her but that is what she will hear mostly at that time of morning. She takes it slow analyzing what's going on. 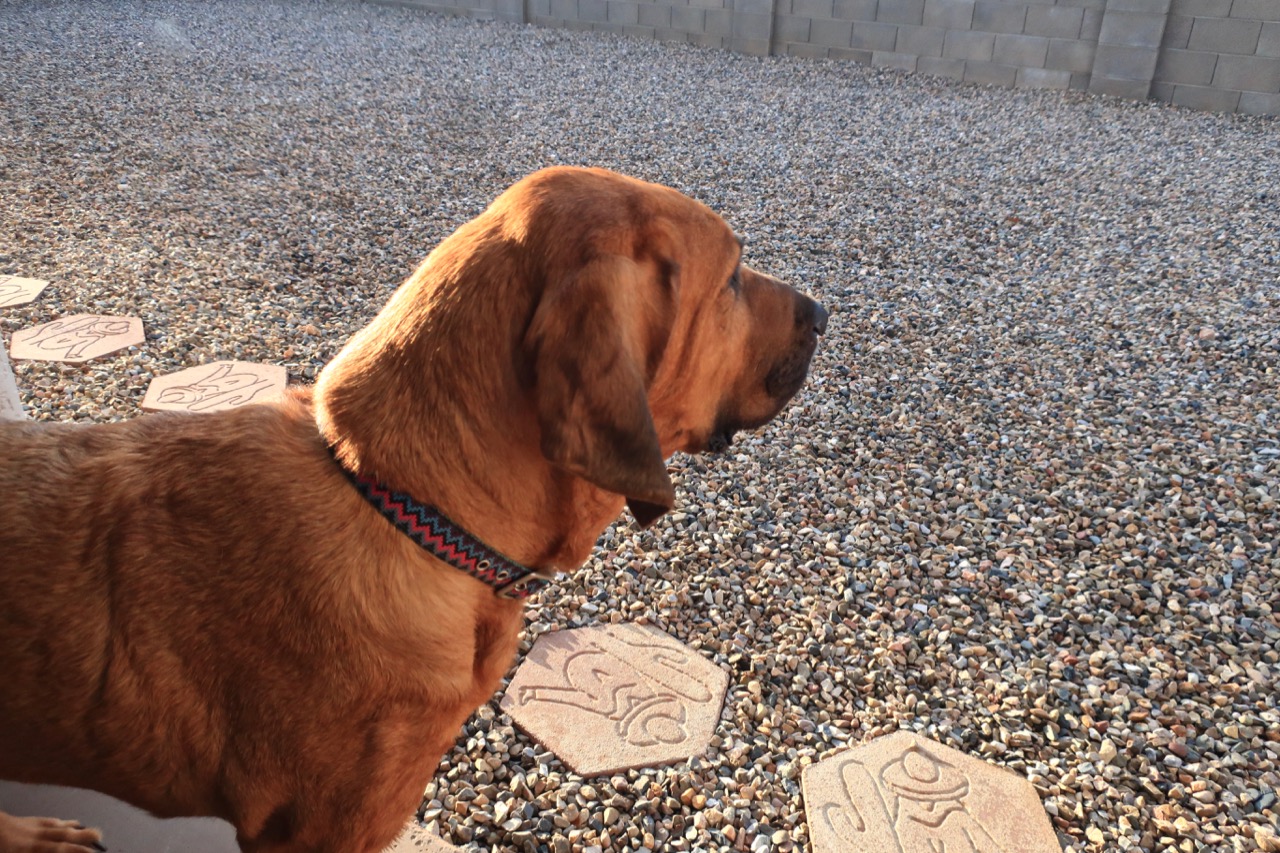 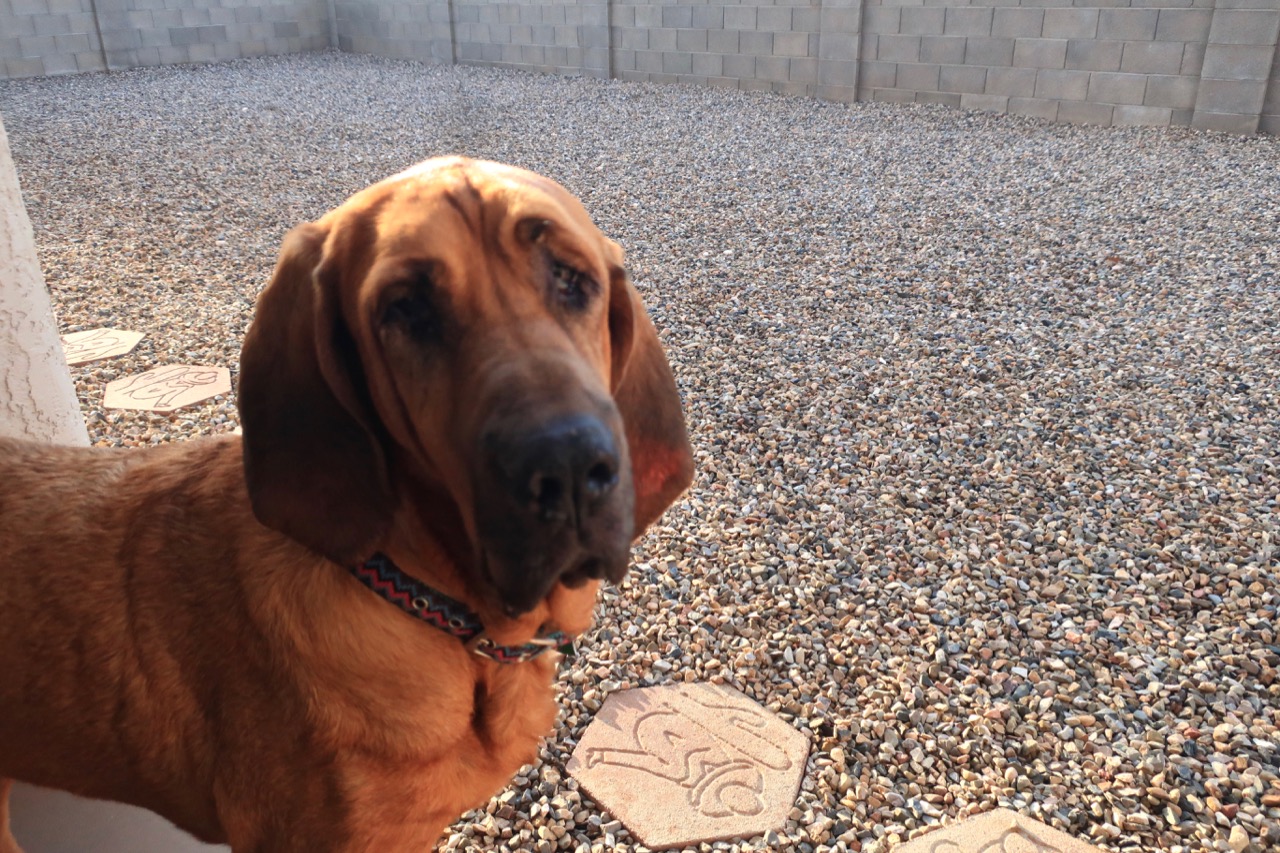 When I asked if she was ready to take her walk, she turned toward me quickly and started whining but once she realized I was still drinking that first cup of coffee ... she did what she always does, takes a short nap and waits for me to finish. 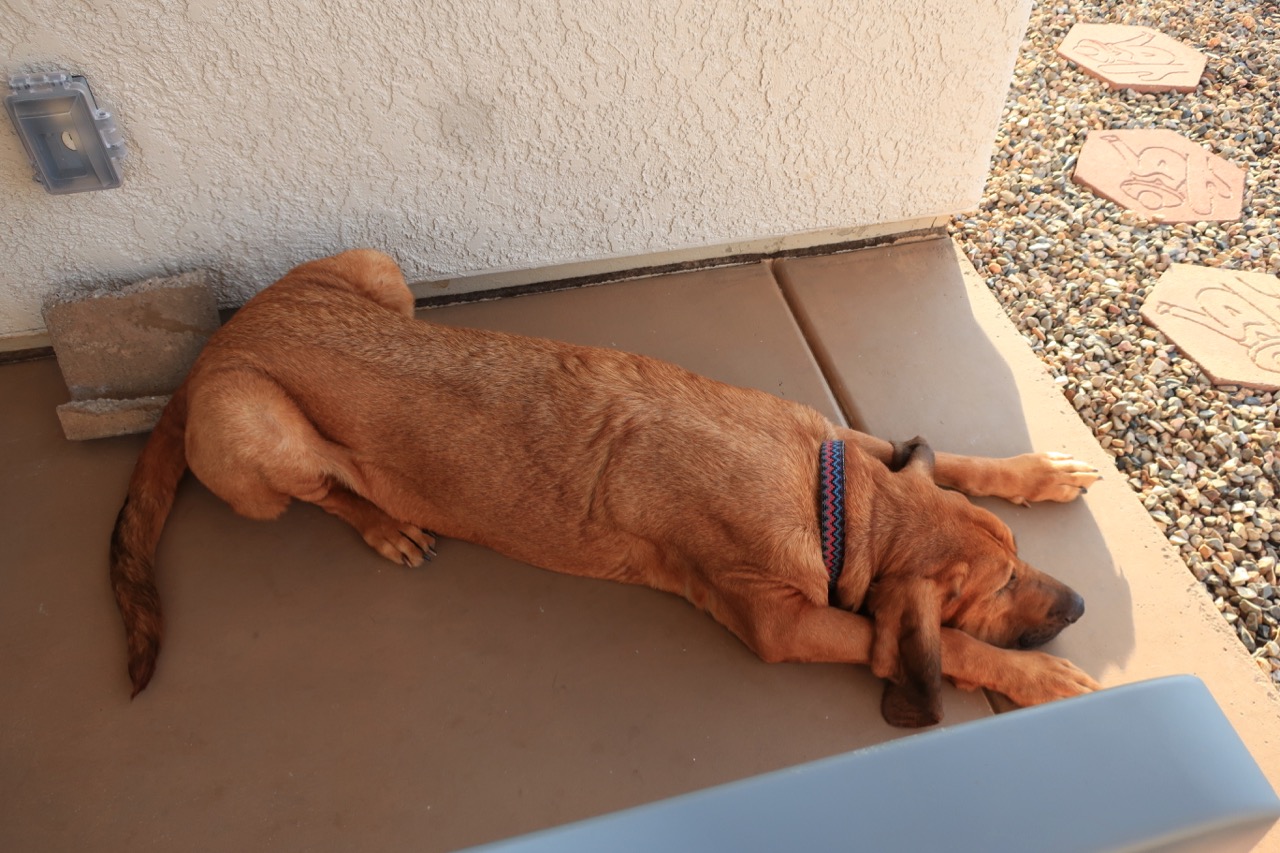 Once she saw I was taking things to the car she started getting excited while Heidi was back in the computer room sound to sleep. While I was loading the car I kept thinking about taking the hounds or leaving them at home. Although they would be traveling in air conditioning I have always followed that temperature scale converting outside temps to temps inside a car without AC. Seriously.

New car with AC, what could go wrong? Probably nothing but what if it was 92° and we had a flat tire or a car breakdown. You get the idea. Plus like I have mentioned here in the past, I am not really sure that Heidi enjoys riding anymore like she use to. She does not act like she does. She lays down and sleeps instead of sitting and looking out the window like she use to. 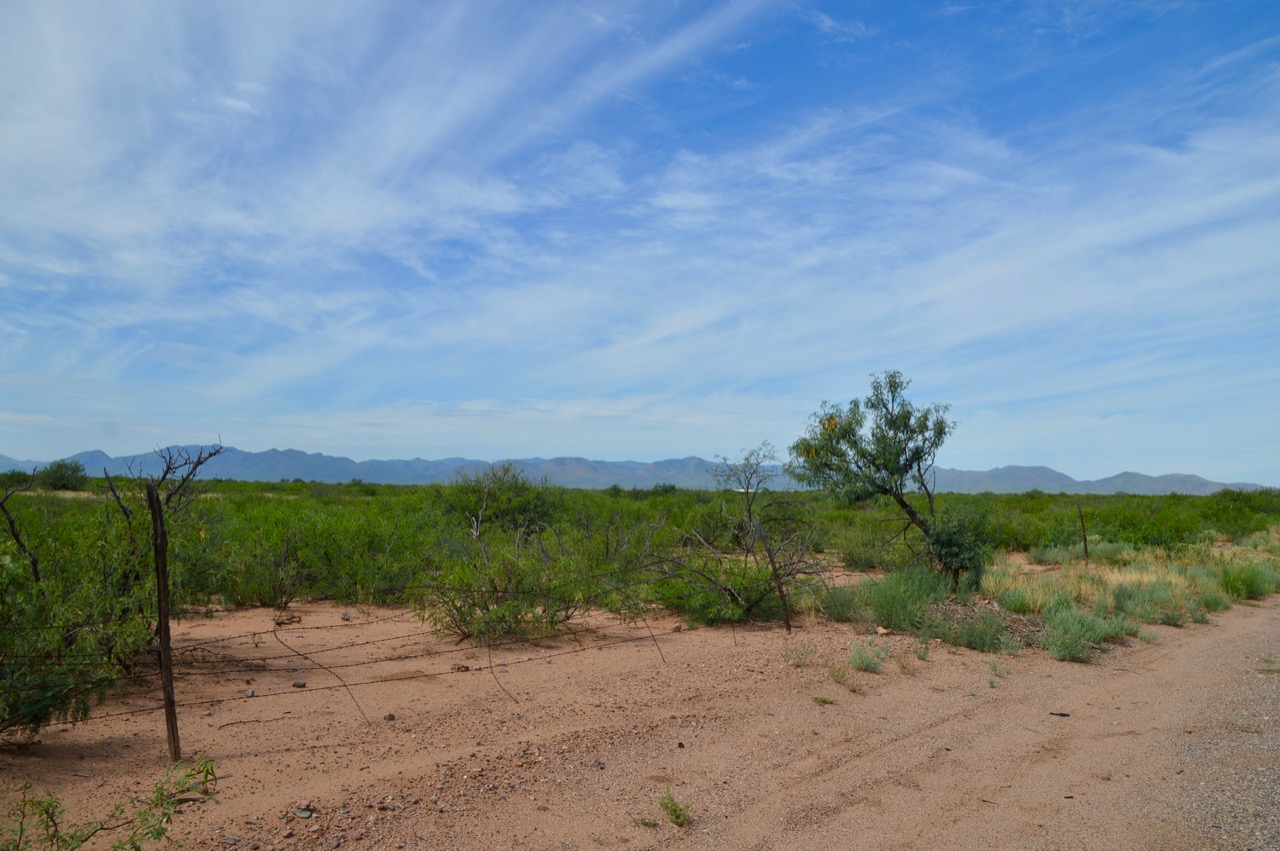 The hounds came  with me today.

We headed toward Tombstone driving through beautiful country. When my map display in the dashboard showed Davis Rd up ahead I knew to make a right turn and head to McNeal. There were no highway signs telling me McNeal was that direction, but it was ... 22 miles away near the Central Highway. 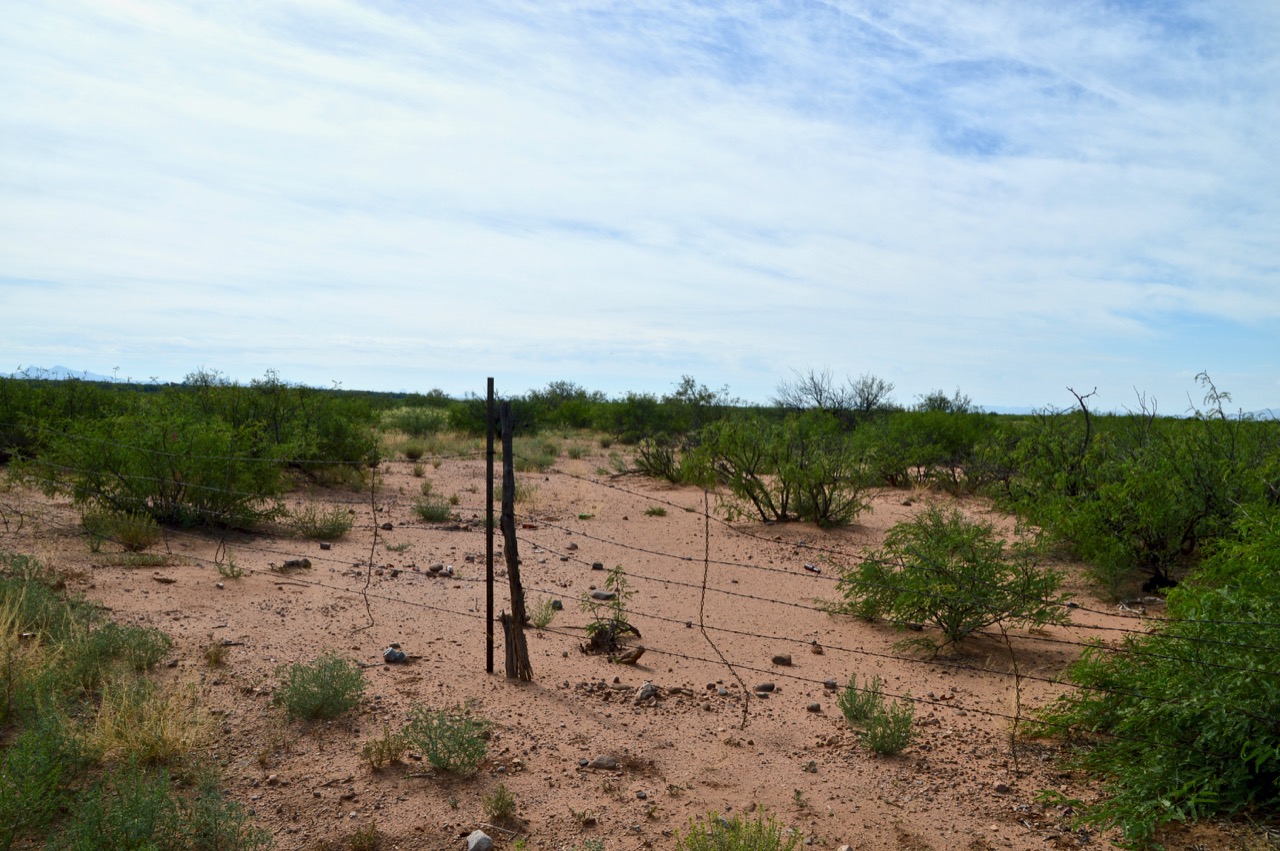 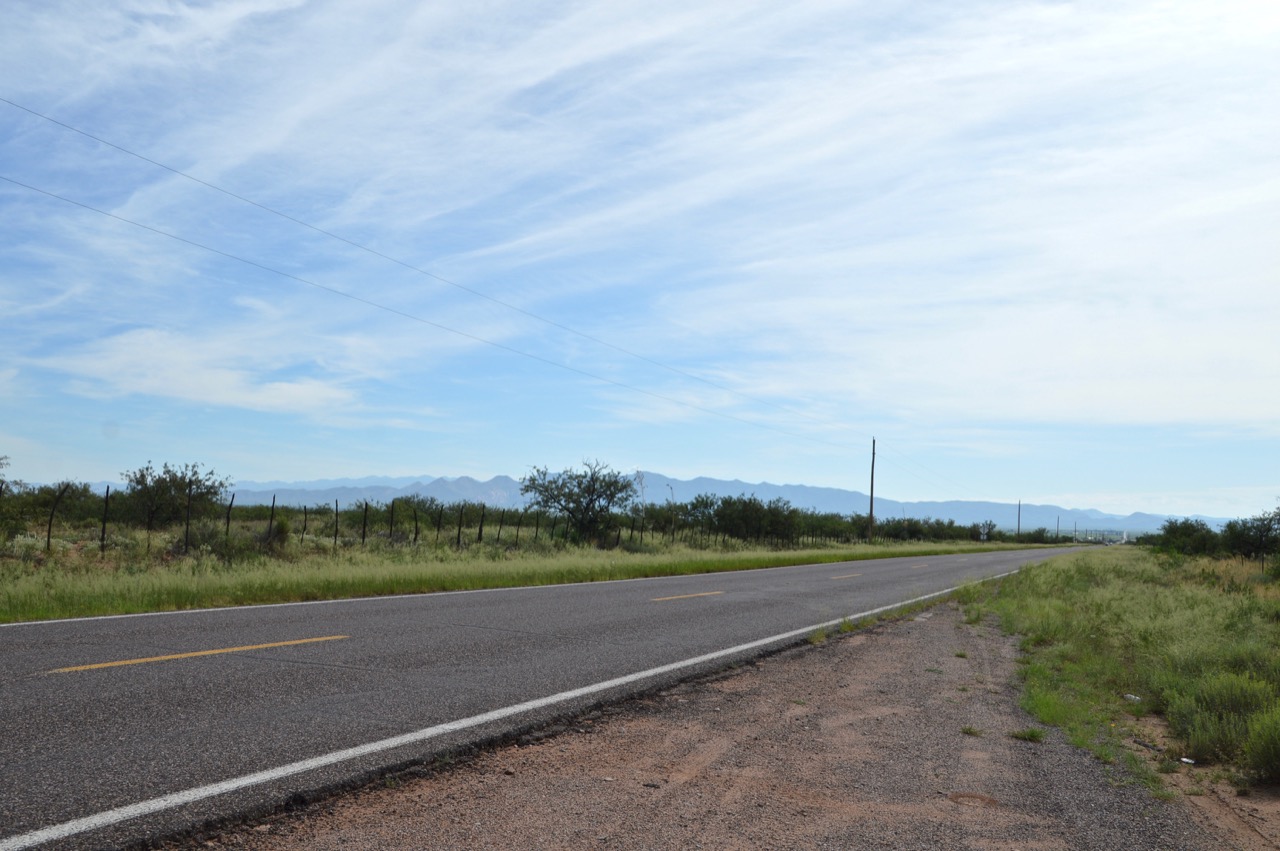 The temp was still in the 80's and that is cool to me. We left town probably around 9am, can't remember now. Many places to pull over to take photos but never in the spot that had the best landscape for the best photos. 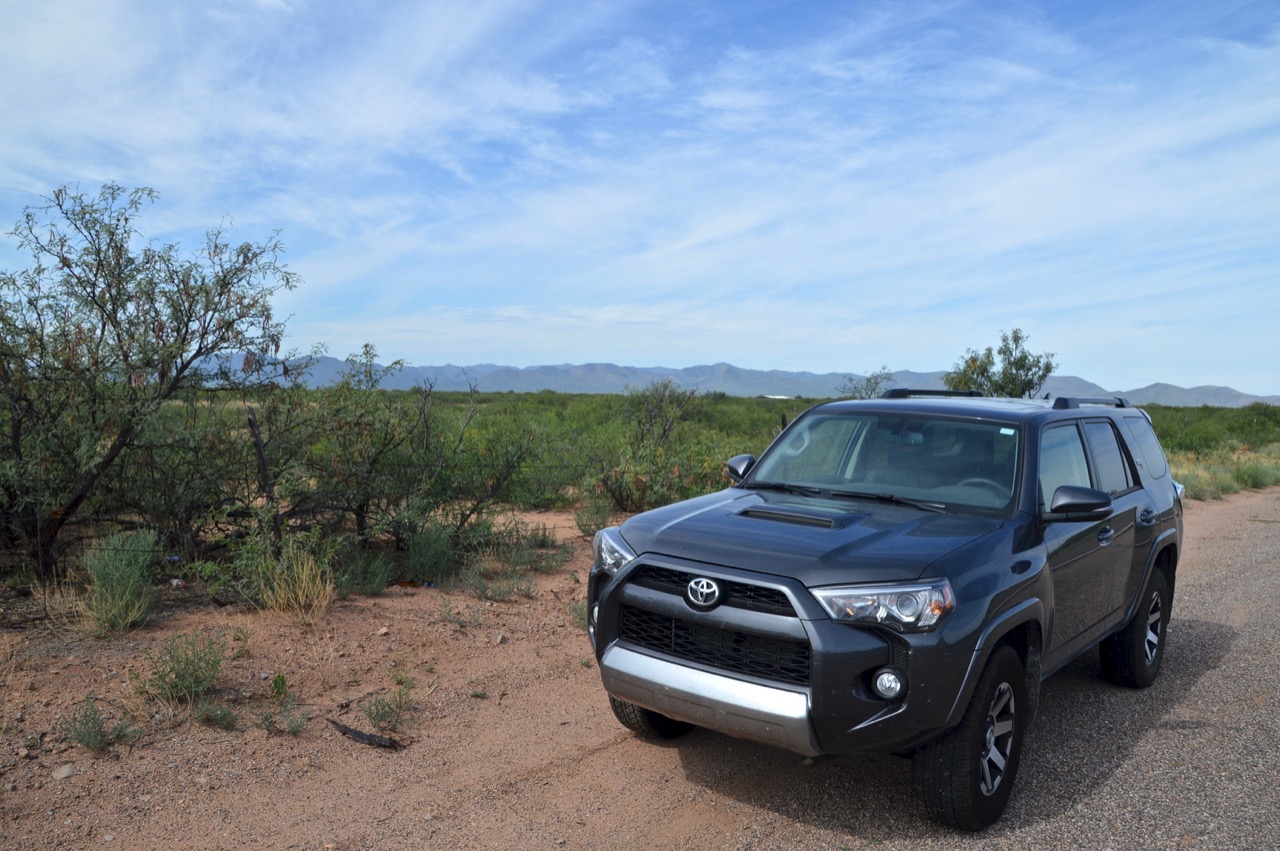 This is looking back West. 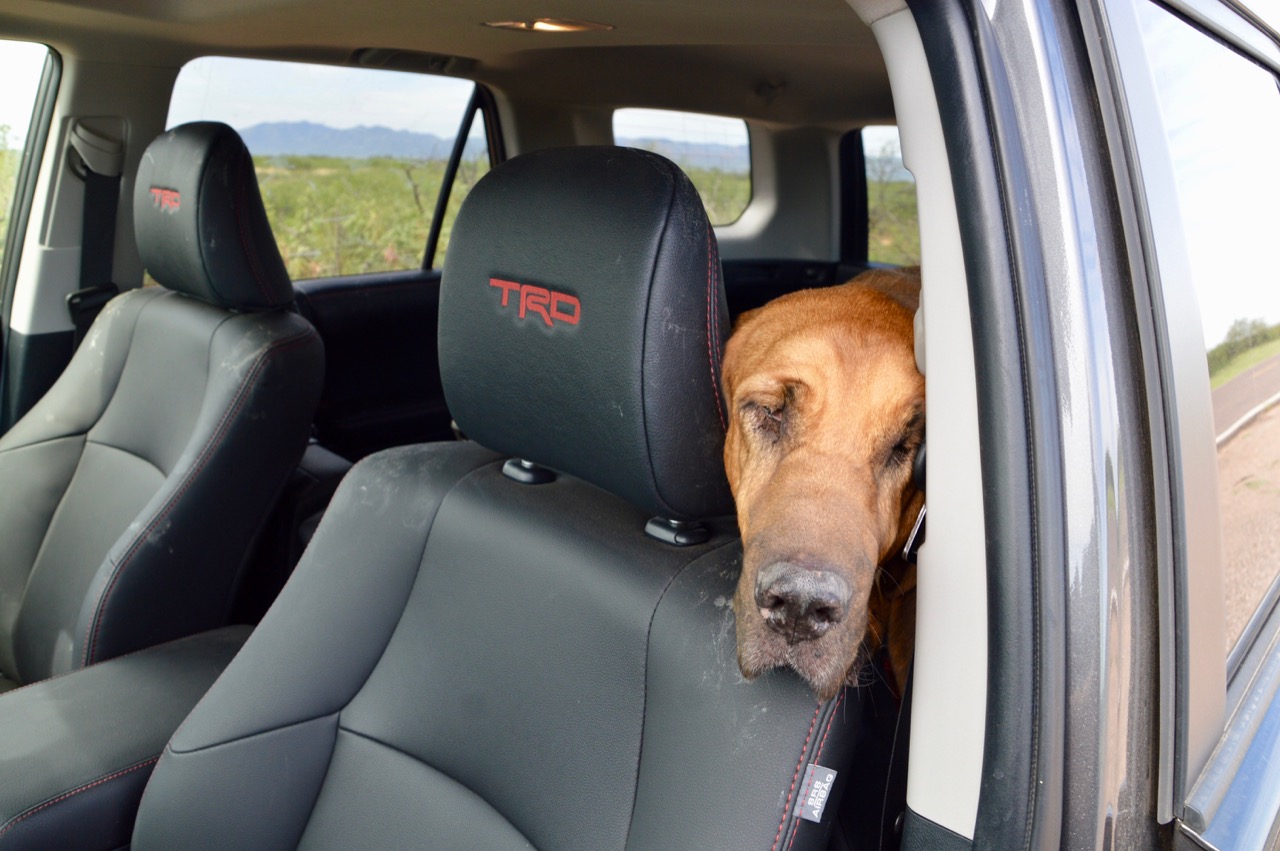 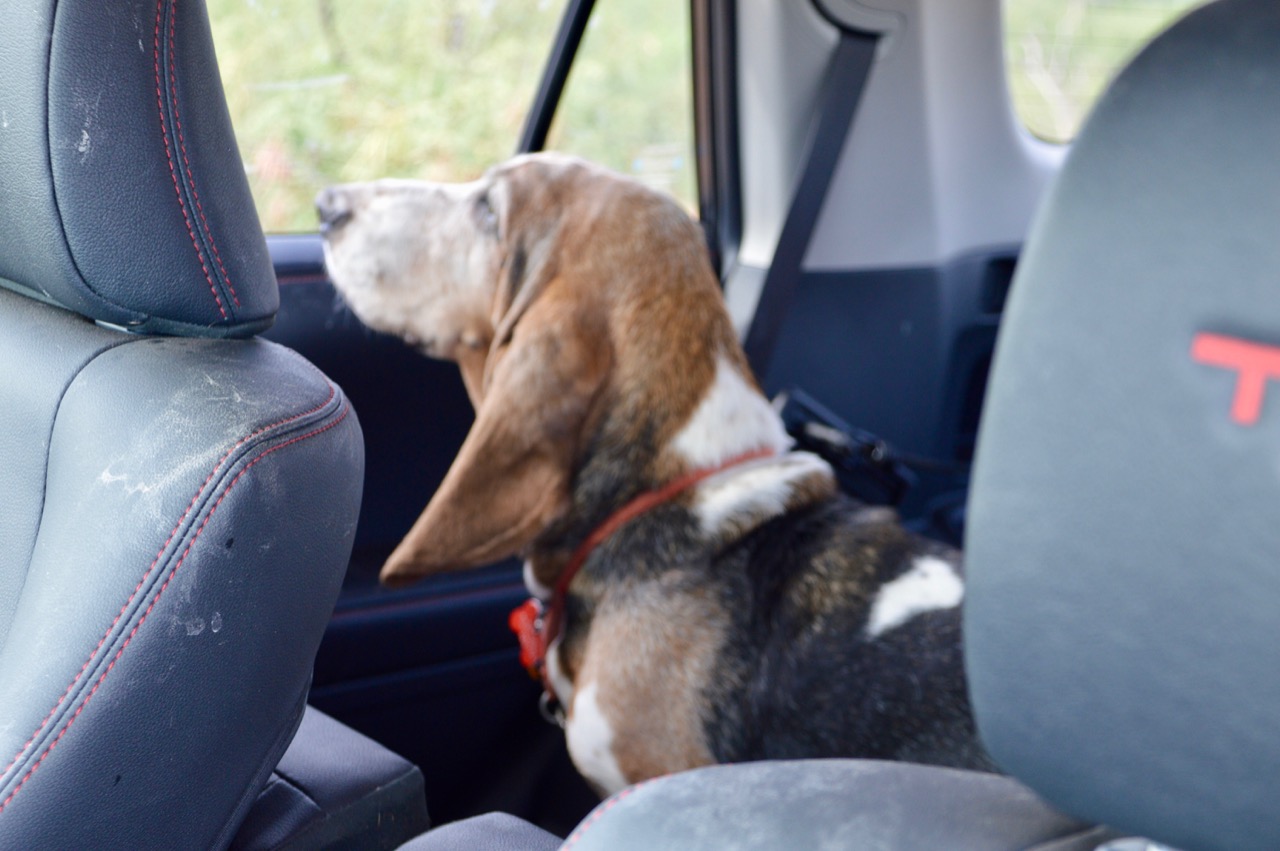 Luckily while I was out of the car taking photos, neither hound tried to get into the front seats. Once the car stopped they thought it was time to get out like they always do, but this wasn't the area to take a hound break ... too close to the highway. Yes ... that dried bloodhound drool will come off the leather seats easily with a damp cloth without staining the seat.

When the car started moving again ... they both laid down and went back to sleep. Where's the adventure in that? 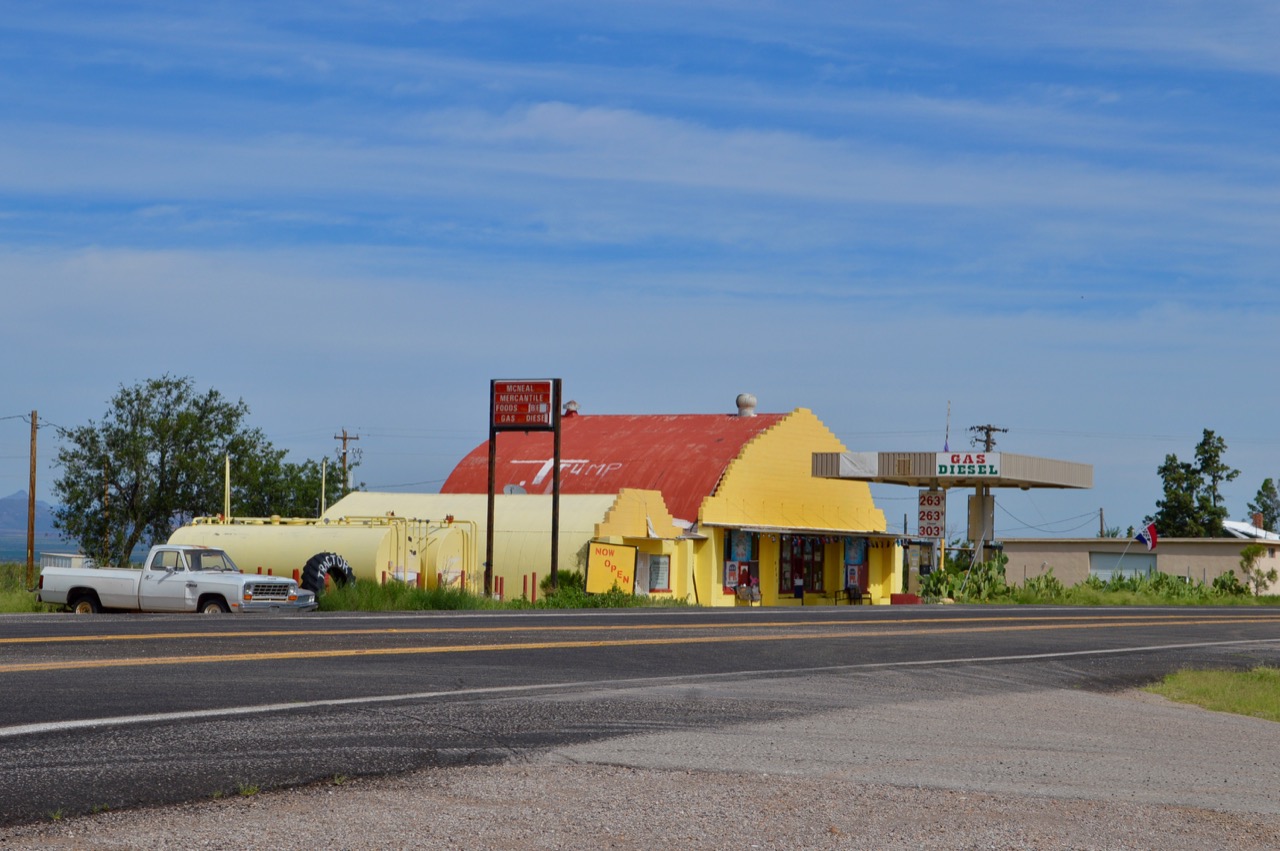 In my search of real estate before moving, I really liked a piece of property that was for sale near McNeal. The house was built two years ago and had a small guest house to go with it. It sat on 75 acres and 8 miles from this general store in McNeal. I had seriously considered that house and tried to justify in my mind that it would not be too bad driving to Tombstone for groceries and I could buy gas here. I thought the highways I just traveled on would be great for bicycling. 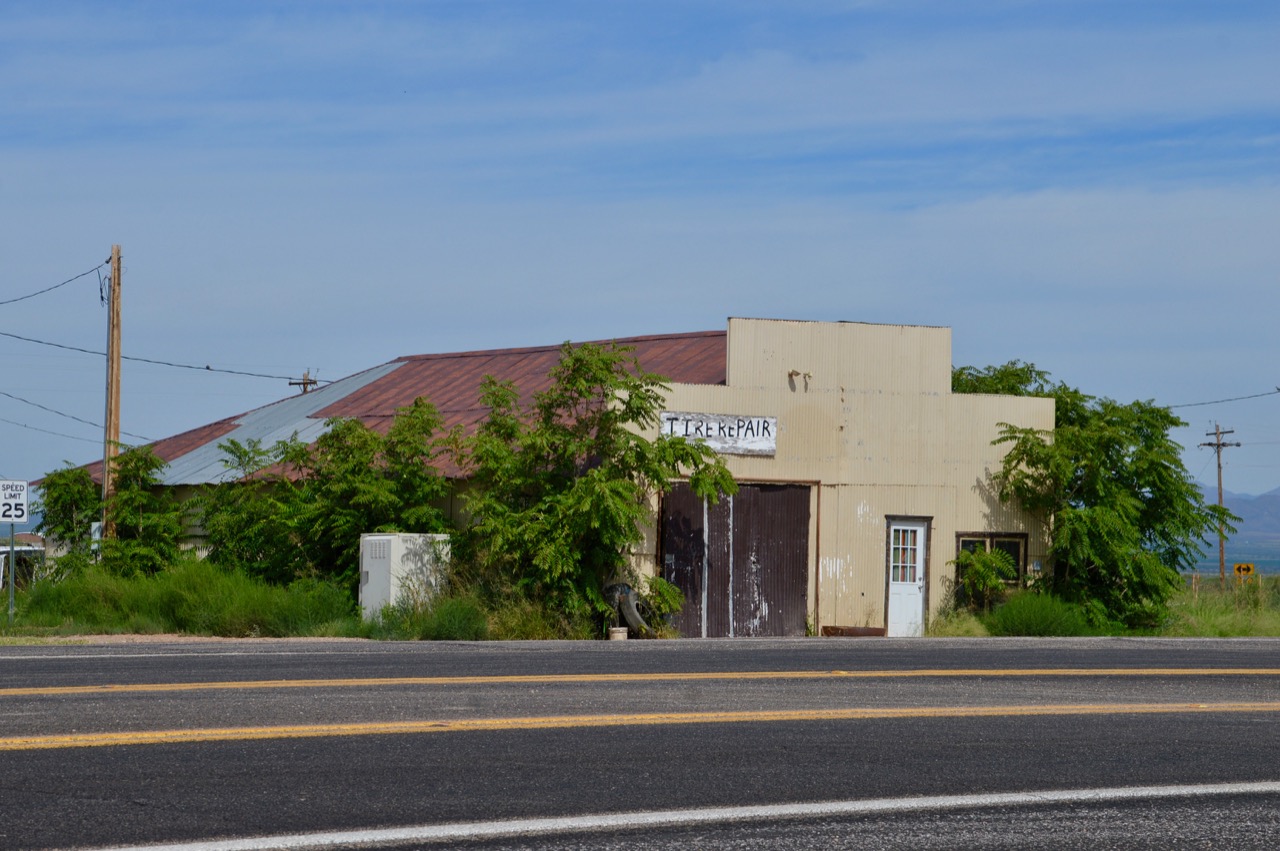 These buildings were familiar to me because I had seen them on Google Satellite View when I followed the road from that property to 'town', as I looked around the area. The general store looked different than the view I saw because it had been freshly painted. 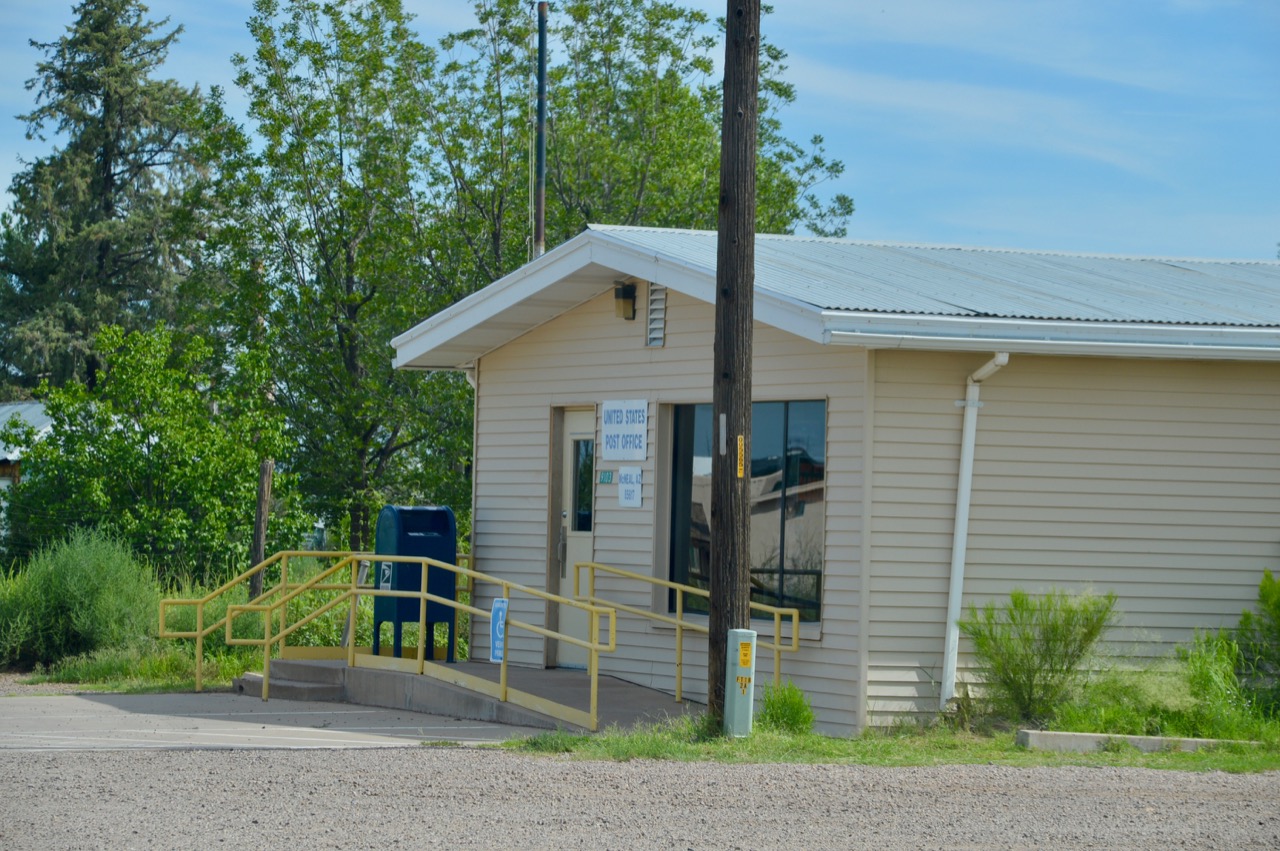 Postal service right across the highway. 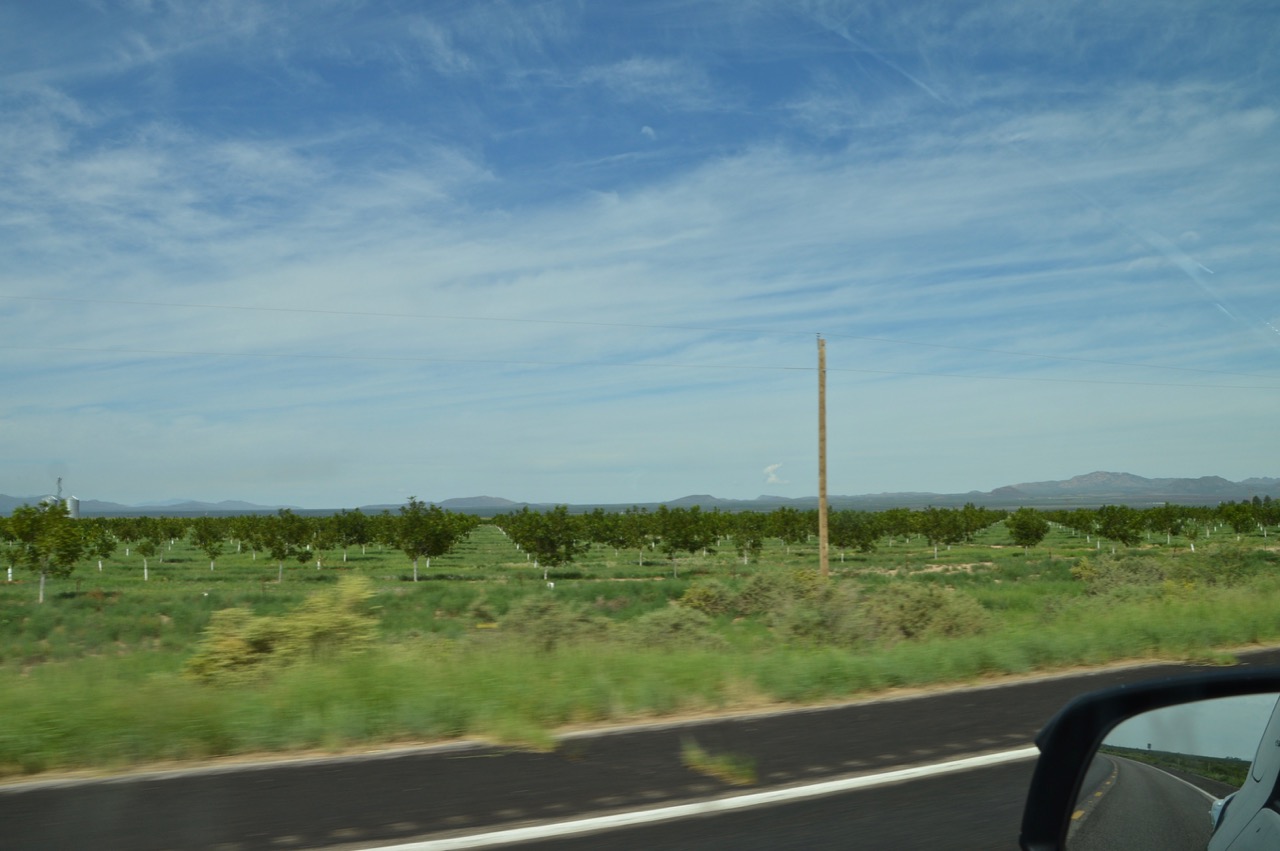 But like I said, this move was about convenience, or at least that was one of the things I listed as a 'want'. I had been driving 12-25 miles for groceries the past five years and I was tired of that. It doesn't seem like much but a pain as they say.

We continued north after that short stop for taking photos. We would pass through Elfrida, Sunsites, outside of Pearce heading for I-10. 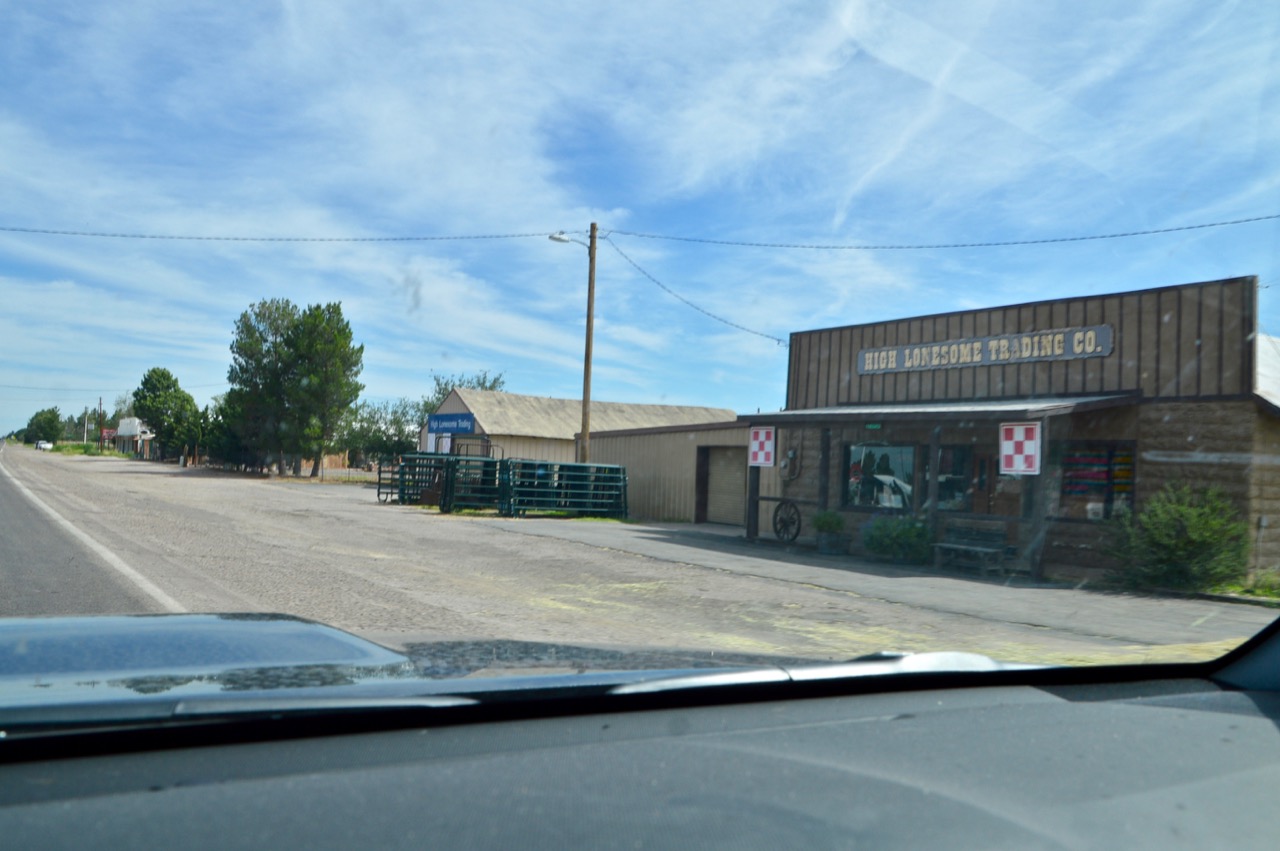 All of these photos with the car moving were pure luck. There were a few that did not turn out as good and were deleted in the editing room.

I would hold up the camera facing a general direction and snapped the camera without ever taking my eyes off the road. I had no idea what the camera would capture and what it would miss. Yes, even out in the middle of nowhere, Family Dollar, Dollar General and Dollar Store are all present. We passed all of them along the way. 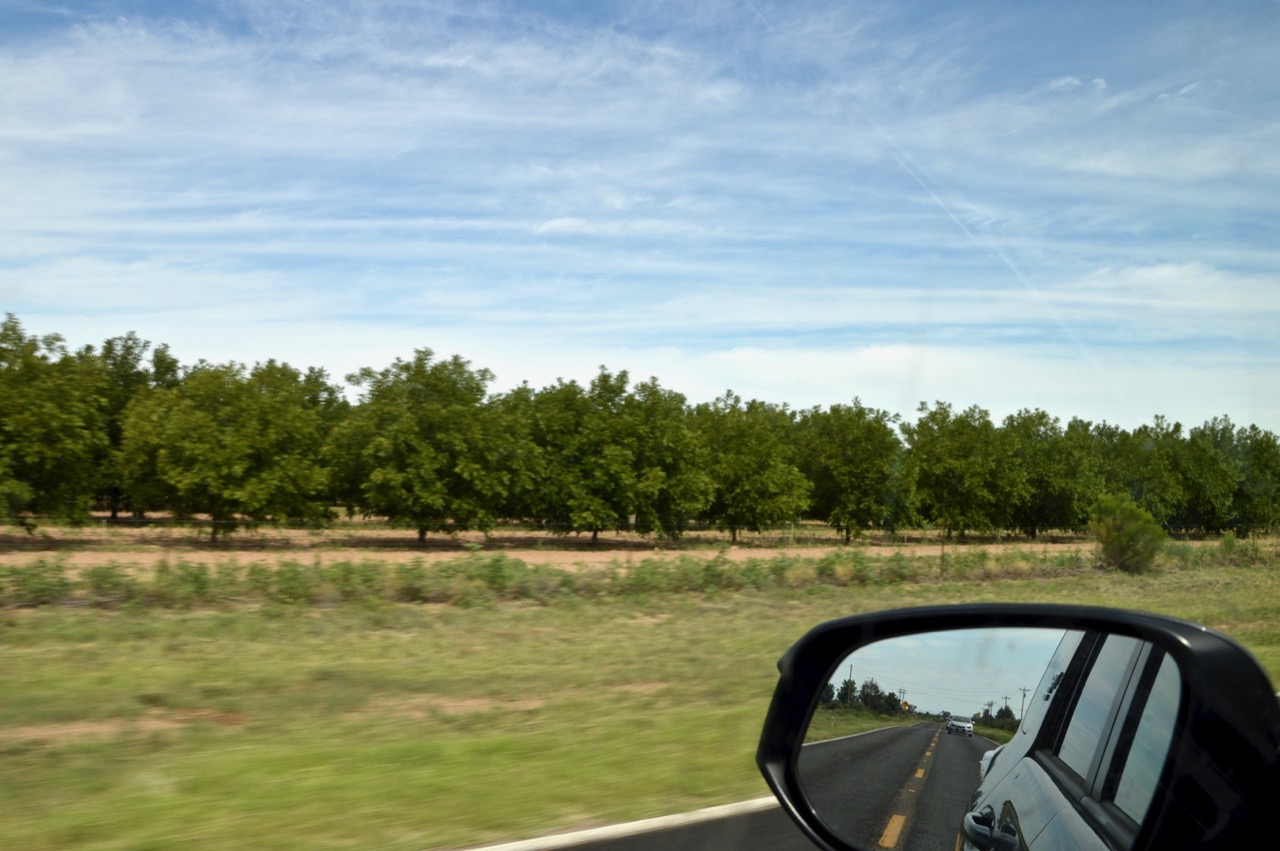 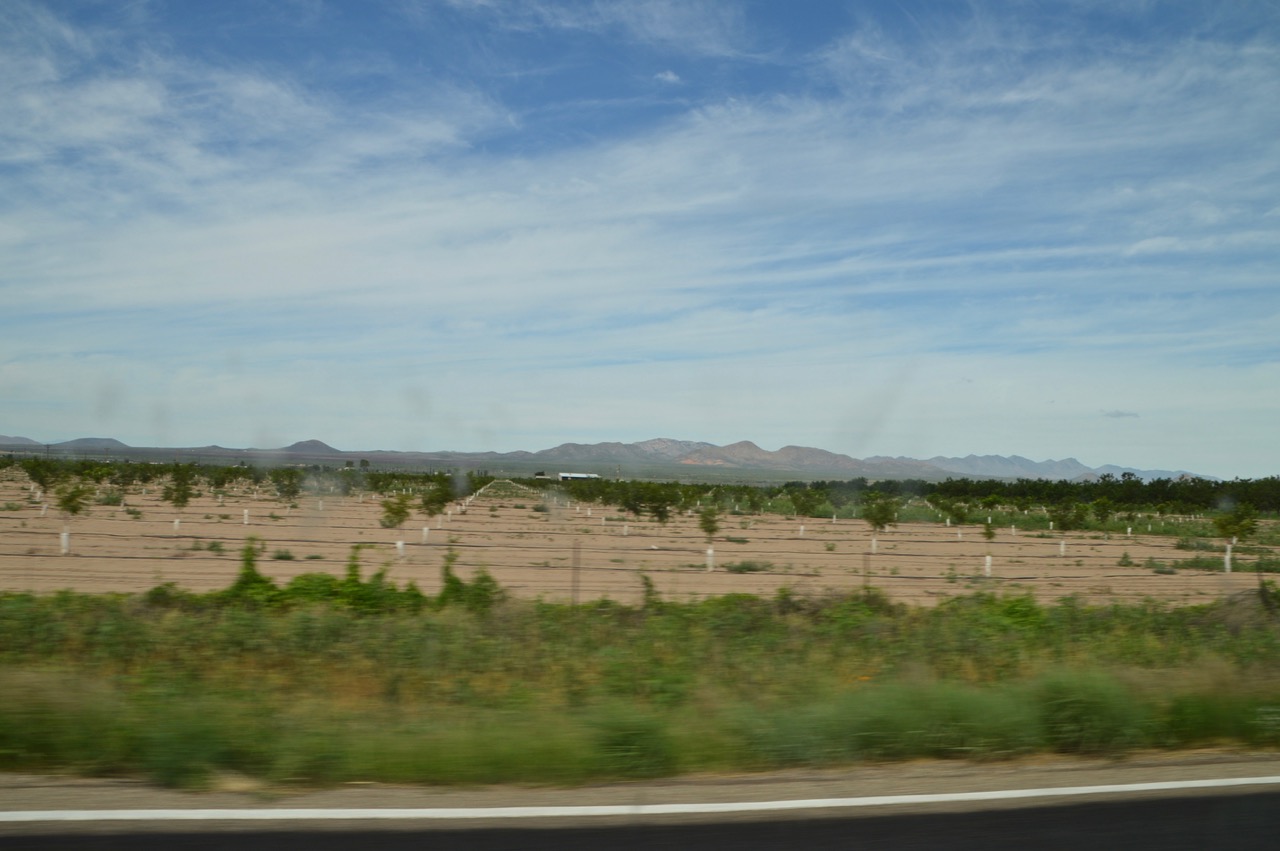 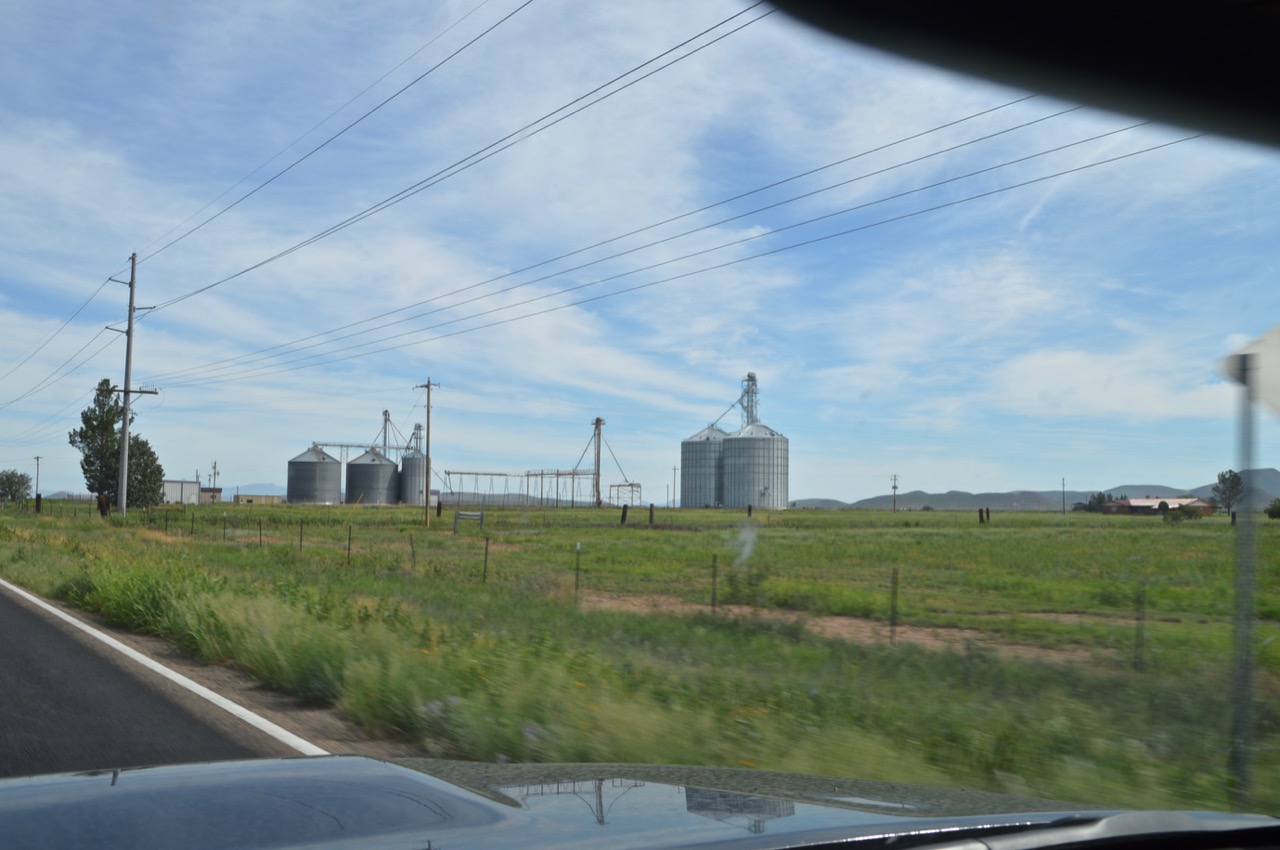 Somewhere in my photo library on my computer there is a file called "Local Drives". In a few of those folders are photos exactly like these next few. If you took the mountains out of the background some people would think these photos were taken in southern Indiana on Hwy 57 between Hwy 54 and 67. My friends in Indiana were shocked to know these were taken today in Arizona on Hwy 191. 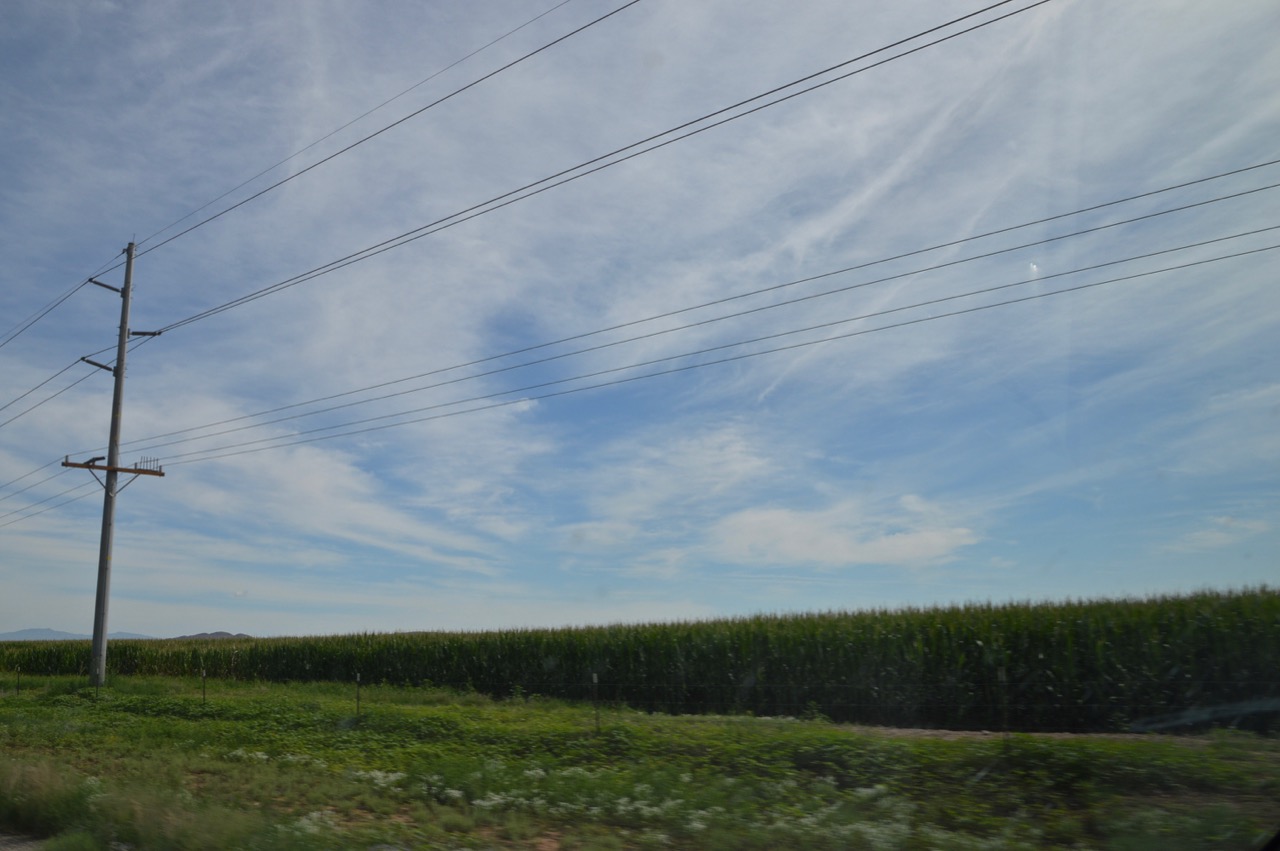 Some of the tallest, healthiest corn you would ever see in Indiana. In Arizona. 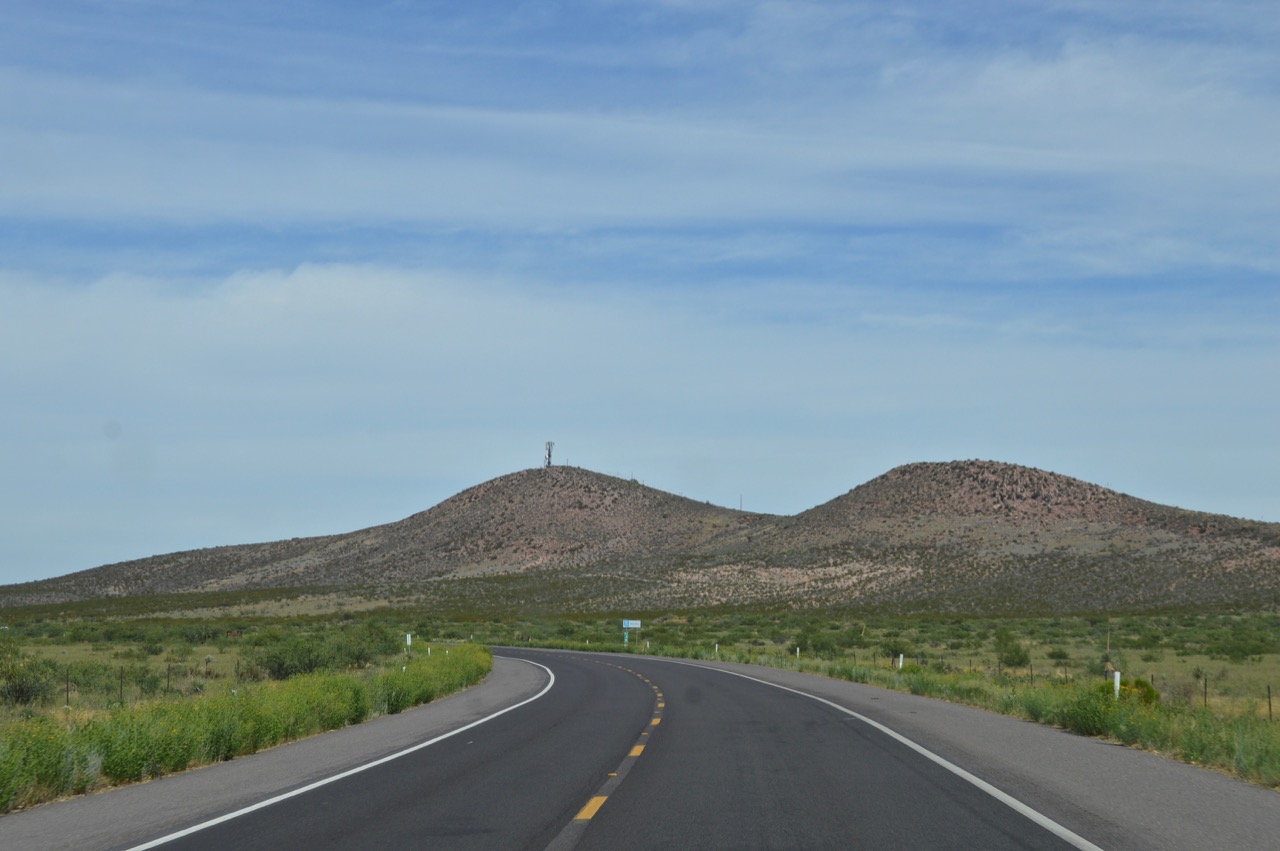 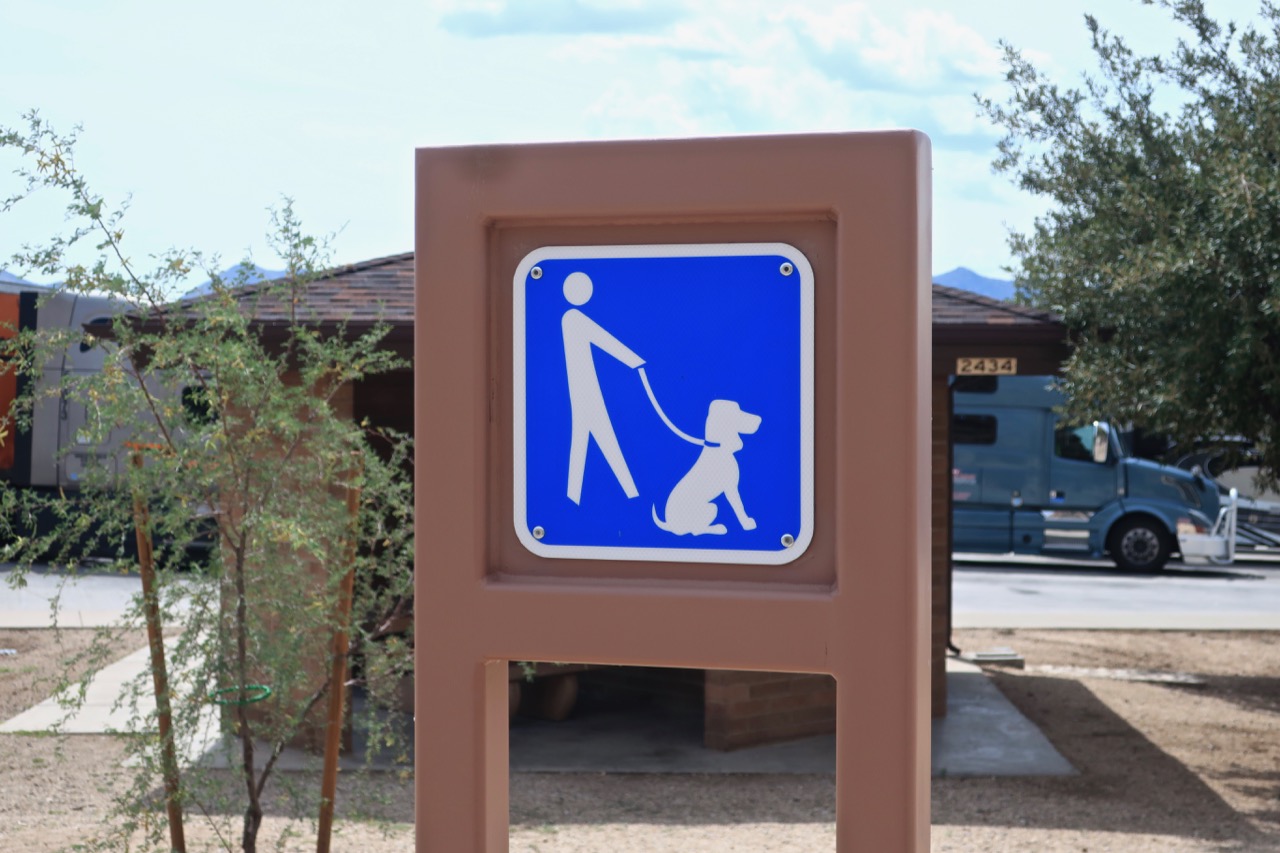 On I-10 heading toward Benson I knew there was a Rest Area that I was going to stop at. It wouldn't be the first time I passed it but the last time I did was the day we arrived during our move cross-country. Then, I was in a hurry to get to the new house and knew the hounds could wait for any breaks until we got there.

Today I wanted to stop. We had driven 110 miles by this time and I thought Heidi at least needed a break. She seems to be peeing more often as she ages. I knew Stella had no interest in peeing nor getting out of the car. She did but the truck noise, highway noise, just this type of atmosphere in general scares her. Heidi headed right over to the pet area with her nose to the ground as I hung on to two dog leashes.

Photos were taken after the hounds were in the car, engine running and AC on. 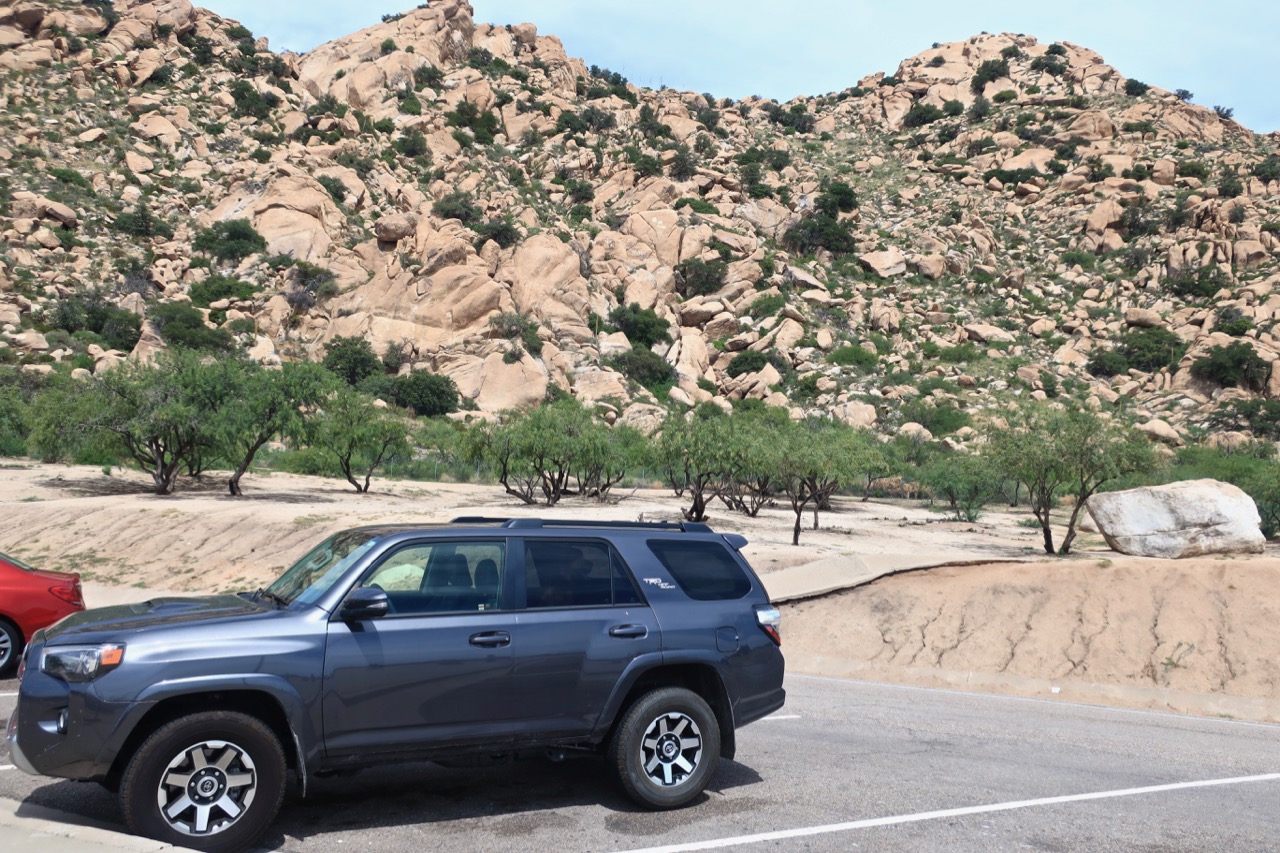 It was about 17 miles from here to Benson but I had other plans. We would not be on this Interstate much longer. 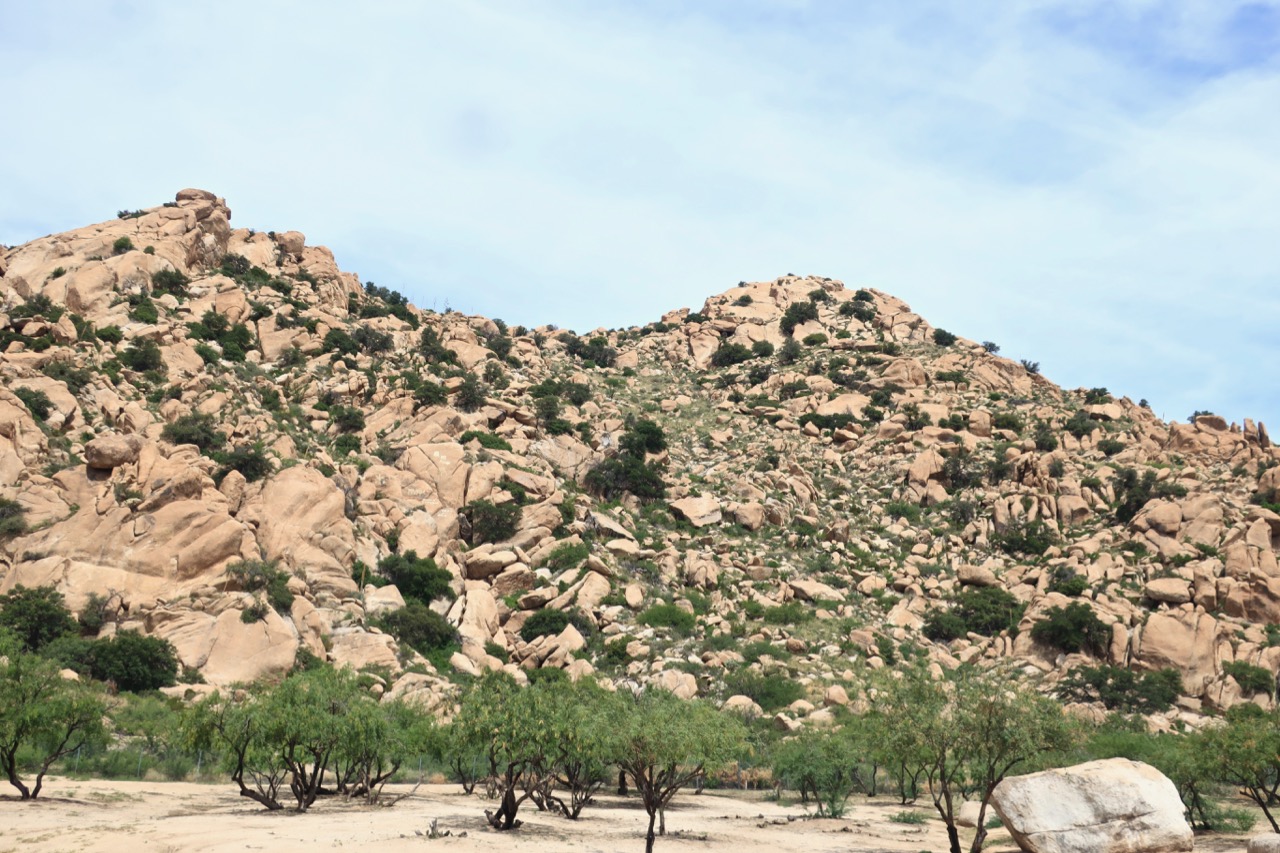 I saw Exit 306 for Hwy 80 heading south ... down through St. David, a town I mentioned in yesterday's post and toward Tombstone, but I still had other plans.

I wanted to turn right on Hwy 82 and head to Huachuca City. I had read about that town in the book I am reading and didn't realize it was so close to the north part of Ft Huachuca. Originally the town was set up for all of the black soldiers to live assigned to the Army base. Of course now there is the typical gas station/mini marts, run down neighborhoods of house trailers and old homes, a new or new looking RV Sales Lot and I found out coming in from the east side ... a LOT of RV parks on Hwy 82 before the Hwy 90 intersection.

I drove up and down a few streets in the town ... wow ... what an eye opener. In some parts of town you could not imagine anyone being as poor as the residences I was passing. A surprise actually. It didn't take me too long to stop my exploration around the town and get back on Hwy 90 and head to civilization.

By the time we returned home, I could hear thunder from somewhere with bright sunny skies. Heidi sprinted through the house for the patio door to be let out. Stella was more interested standing by the dog food container letting me know that I was 45 minutes late for her lunch. She had not started howling yet but that was only because I started pouring out their lunch kibble BEFORE unloading the car and the water bottles I had taken with me.

Strange how a nice morning road trip leads to a short siesta a few hours long on a Sunday. The hounds take theirs every day after they eat, so everything was normal for them. I could tell that Heidi was happy to get home with her sudden burst of energy. She ran through the house and rolled on the living room rug growling at herself. That's a sign she was happy.

Tomorrow morning I'll be back on the bike right after Stella's walk. There is a fine line on when to start ... either before the school traffic or after the kids have been dropped off at school. I either have to leave way before 7:30 or wait until 8:00am .. I'd rather start early.

It was nice traveling through the Wild West today ... we will do it again sometime.
at August 18, 2019