Maybe Some Answers For You 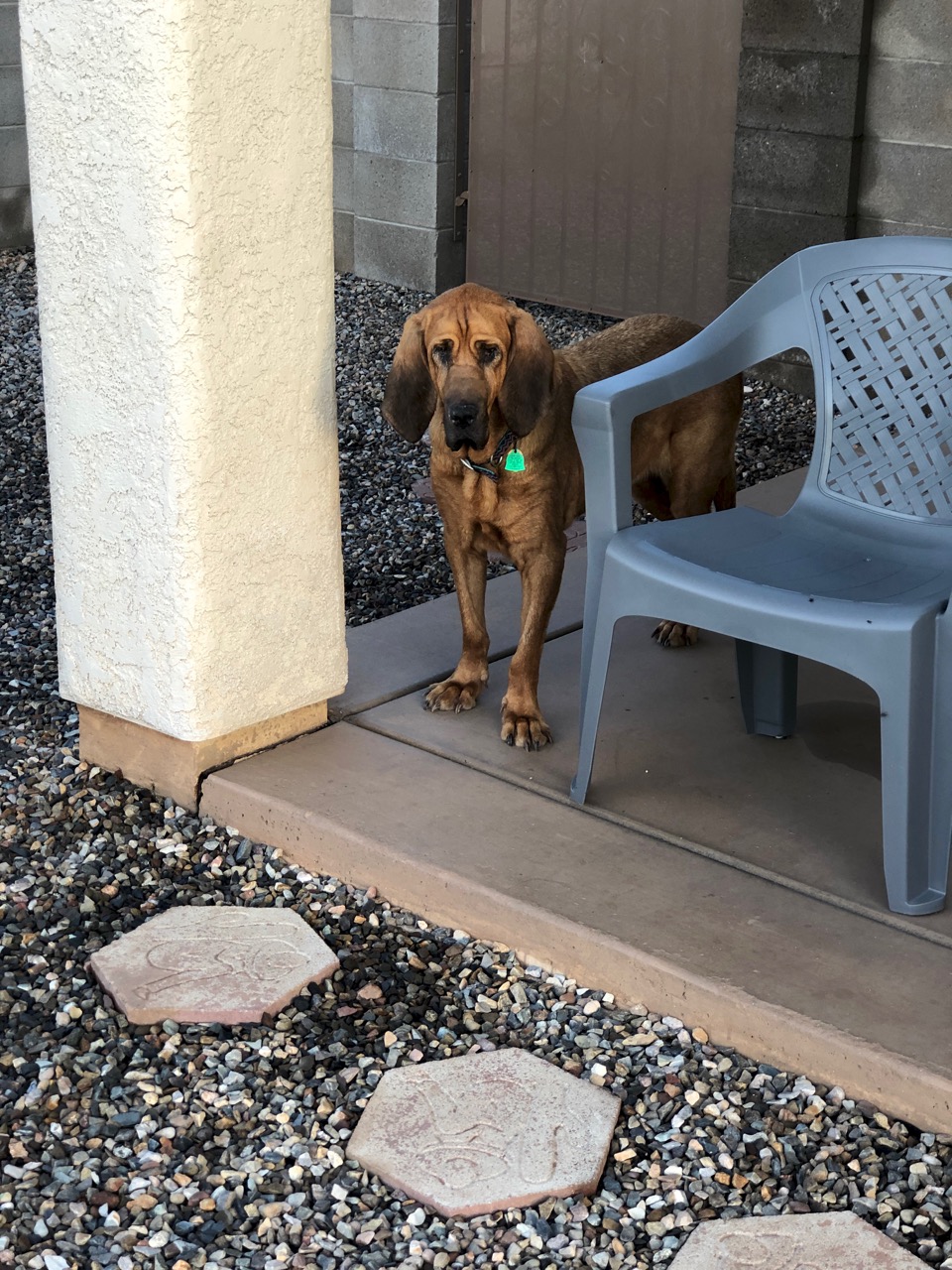 With the latest blog posts these past few days I am sure there are a lot of questions floating around through the list of readers. It's a long story with too much information to write about. That would take multiple blog posts to explain how we "snuck" out of town. One answer I'll start off with ... yes, that blue chair does not go well with the other colors of the house and patio but it was comfortable and I didn't want to spend a lot of time deciding what to buy. It is still in a 'temporary' status but still comfortable. The difference in colors is me thinking outside the box, as they say. 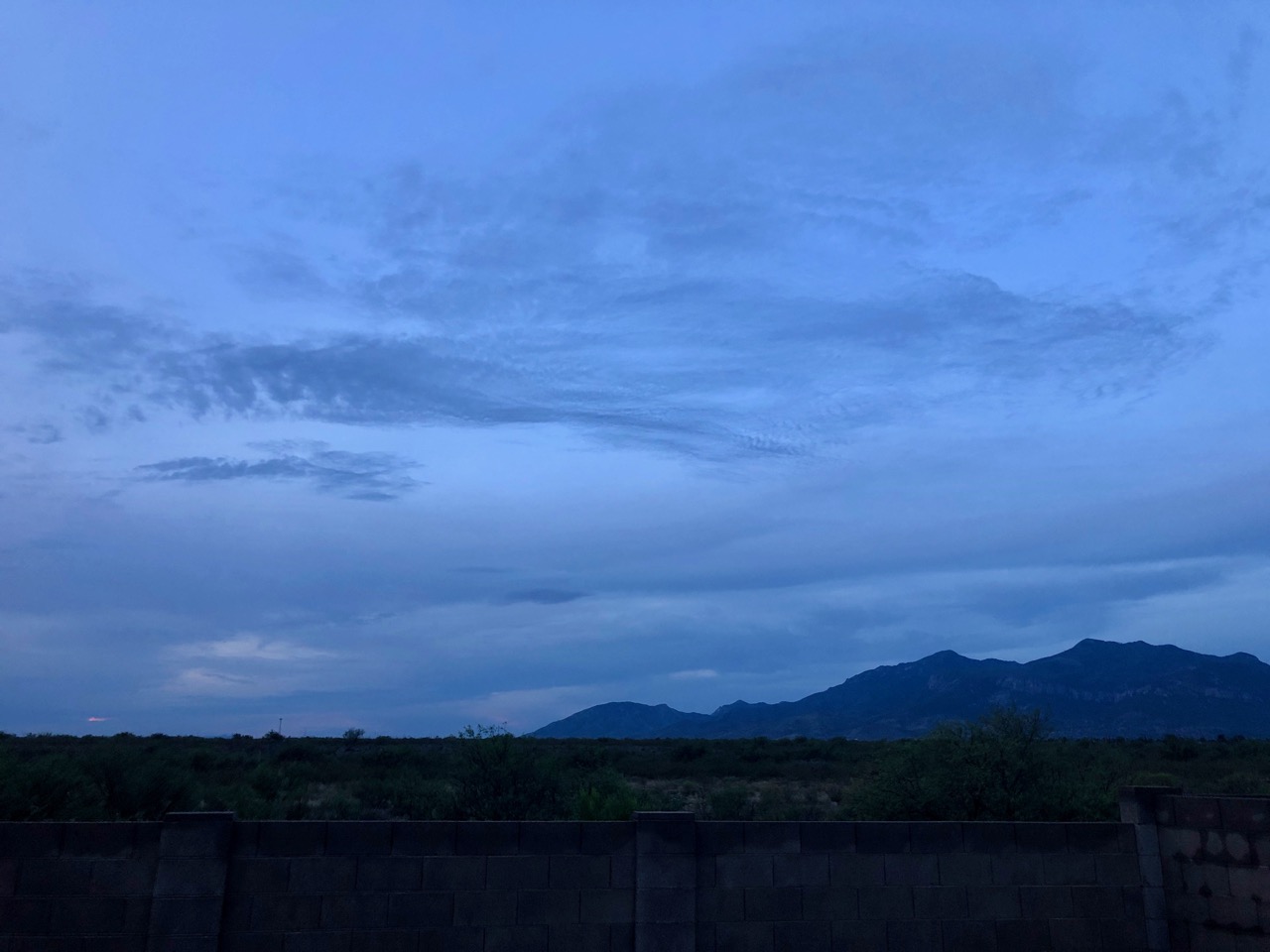 Why the secrecy about the move? What was I was doing last May when I wasn't blogging?

It's called being naturally paranoid, a private person (which makes blogging hard at times) and a reluctance to break out any information simply because I do not want the unexpected visitor knocking on my door because they have found me and want to see the hounds.

I have sent out a few invitations to people that I have met through this blog, a few in person but after reading in the past of people knocking on Al and Kelly's RV door late at night just to visit them or RVsue having strangers (blog readers) driving by her campsite and now her house, to visit her or see her pups ... I just don't want that. 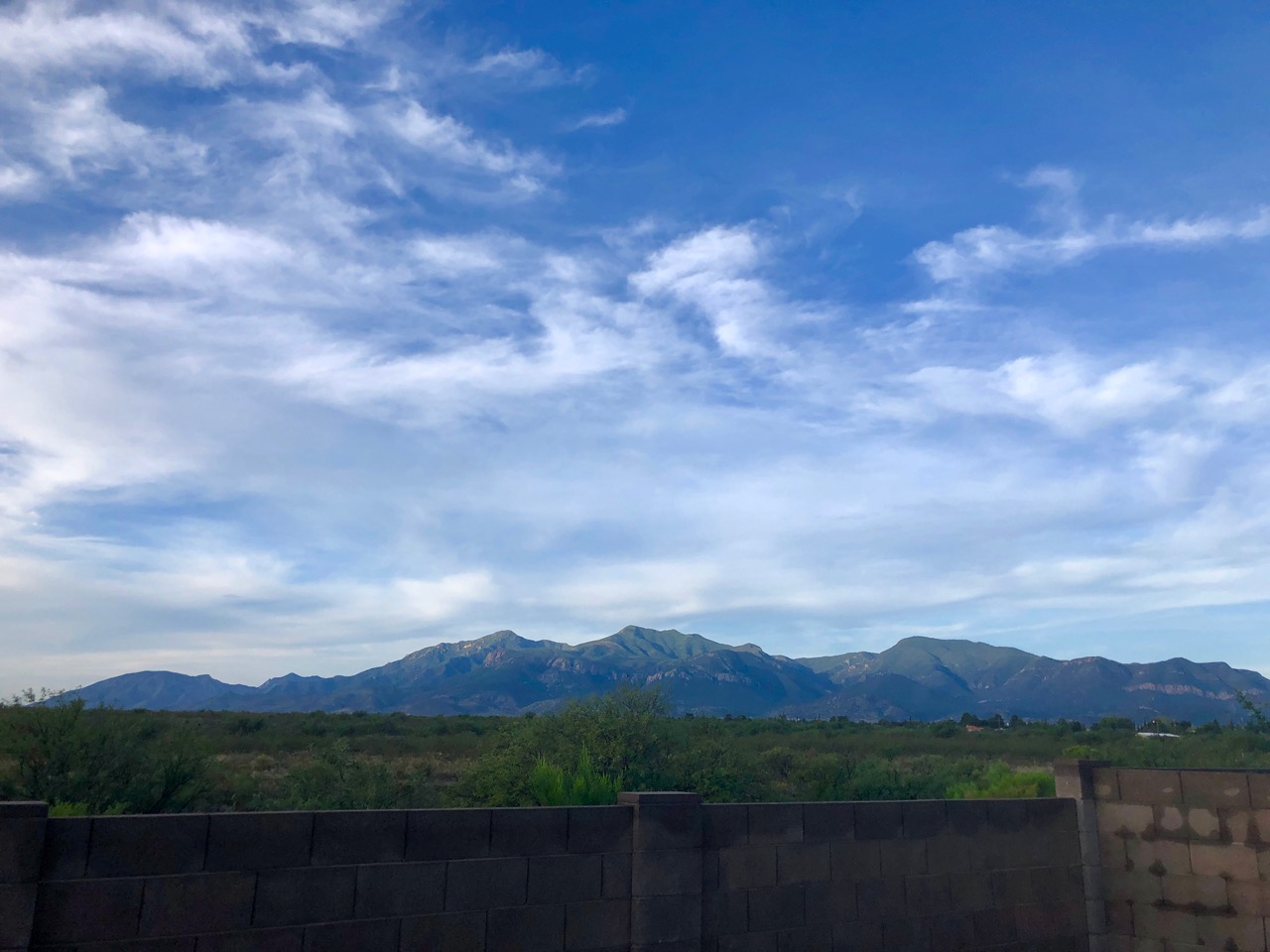 I know that if I blog about what the hounds and are doing or where we are going for those short day trips like I use to ... the smartest and most motivated people will figure out where I am. It will not be hard to do. So I guess there is that fine line where I have to decide what to cover in my blog posts. I know I can take ONE photo of a place I want to go and write about and you would know exactly where I am.

I did not blog about this move a lot in May because I did not have time. I was doing that many projects at home and by the end of the day all I wanted was dinner and sleep, plus 600mg of Ibuprofen. There wasn't any time to blog. I had a date in mind for leaving but we ended up leaving about 6 days early and almost impulsively ... but that is how fast things were falling into place. 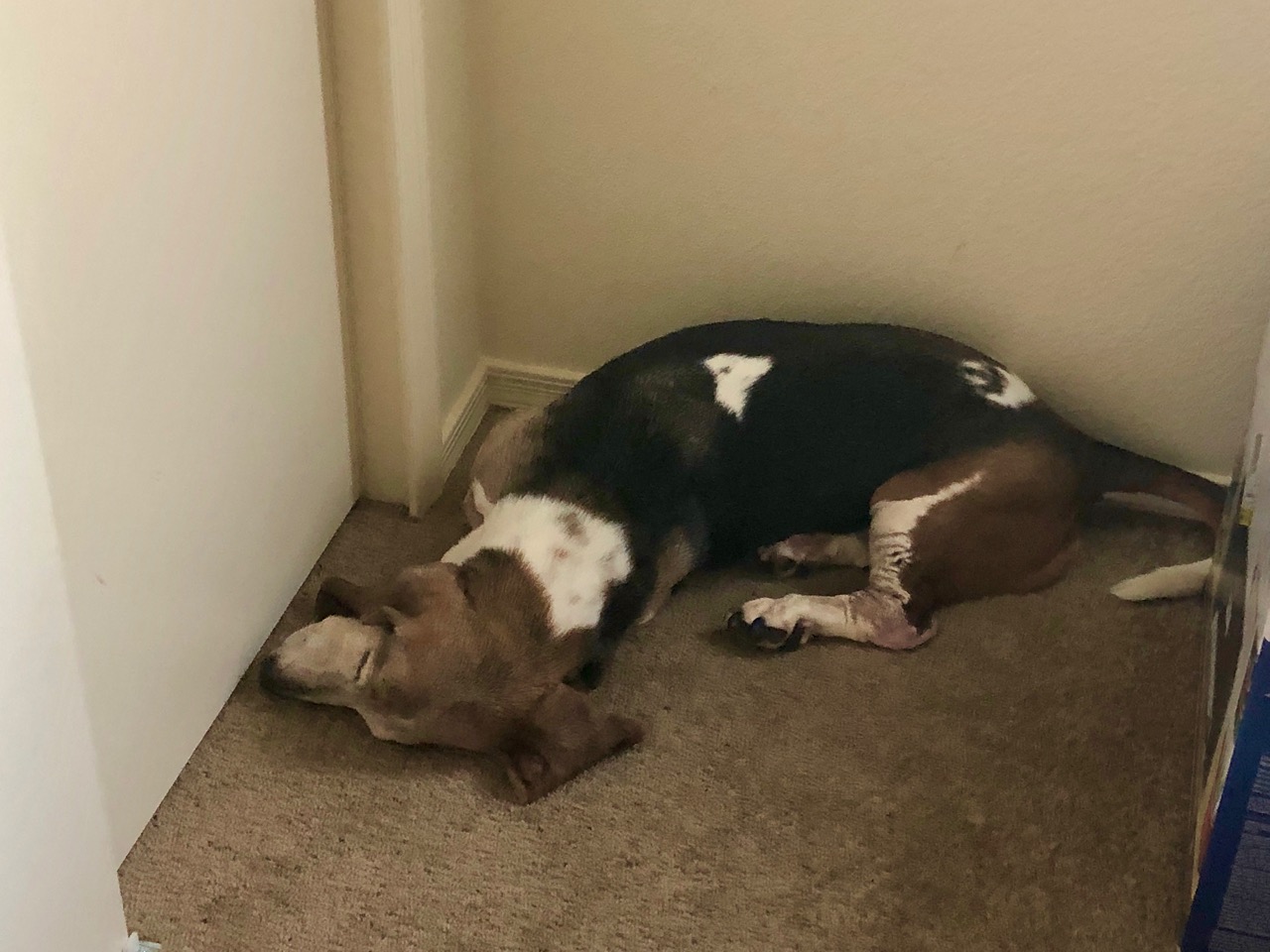 You might think the smell of bacon and eggs from the kitchen would have had a basset hound right at the stove begging for a piece, since Heidi is the biggest food beggar ever ... but not a sound from the computer room. I had to zoom in on her and get a blurry photo so I would not wake her up.

How could I leave a house like that, with all of that land around me and the quietness?

Well as time passed I was getting very very tired of the extreme weather, the ticks that I could never seem to get rid of, the highway noise which had increased with traffic with the new Interstate 6 miles south of me, and the redneck neighbor that was a nice guy but was into Mud Drag Racing. So you know you can't go racing without revving up those loud engines before you go. Plus I was finding it harder and harder to mow the yard in the middle of the summer heat and humidity. 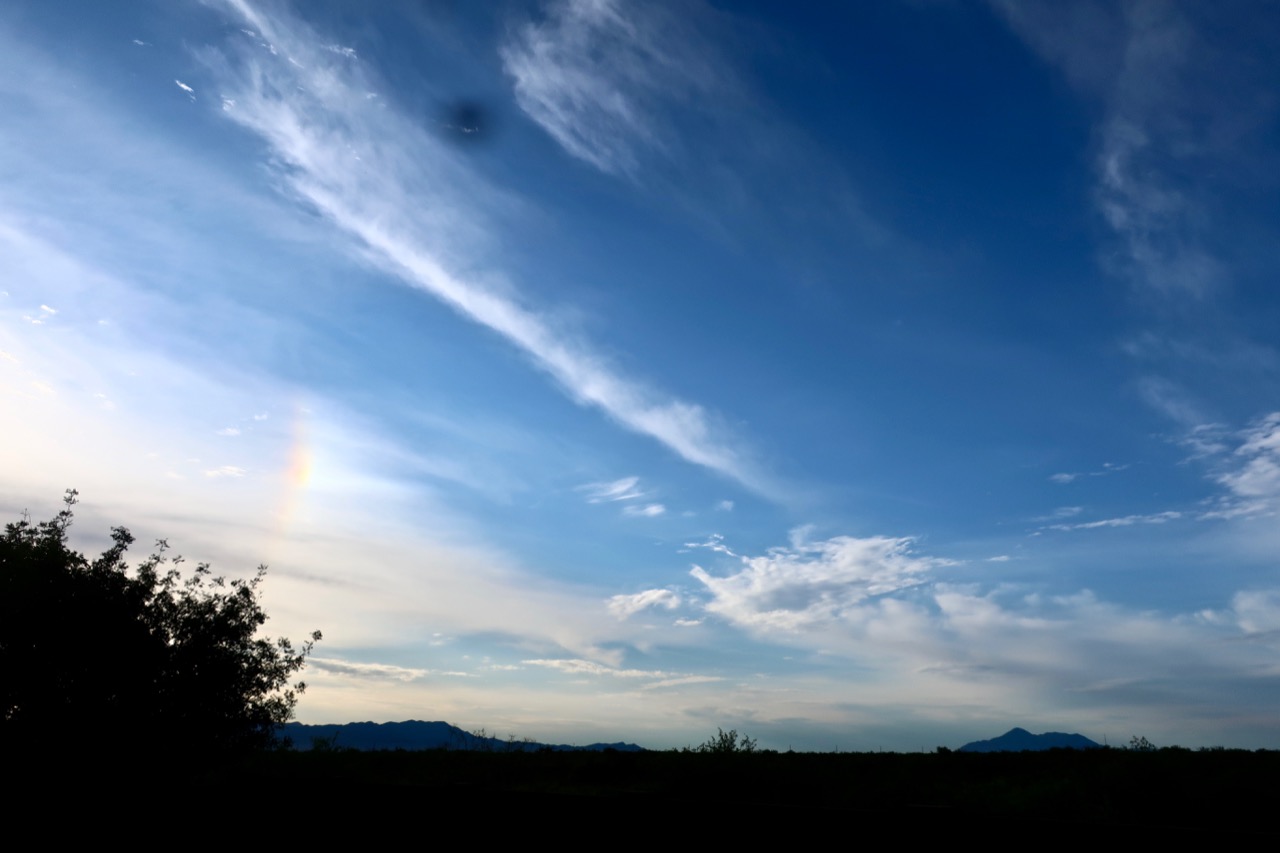 That block dot you see in the picture is the same problem that Al mentioned on his blog post the other night. I clicked on his link for the cleaners he bought, copy the name of them, pasted them into my Amazon search and had them at my door the next day. BTW, that black spot is from my Canon GX 9.

The west has always attracted me and I had lived out west many years ... 15 years in southern California and 10 years in the Pacific Northwest plus a ski season in Breckenridge Colorado. I knew the day the hounds and I drove over the Rockies towards Rifle Colorado in June 2015 on our camping trip that I was definitely moving somewhere west in the next few years. 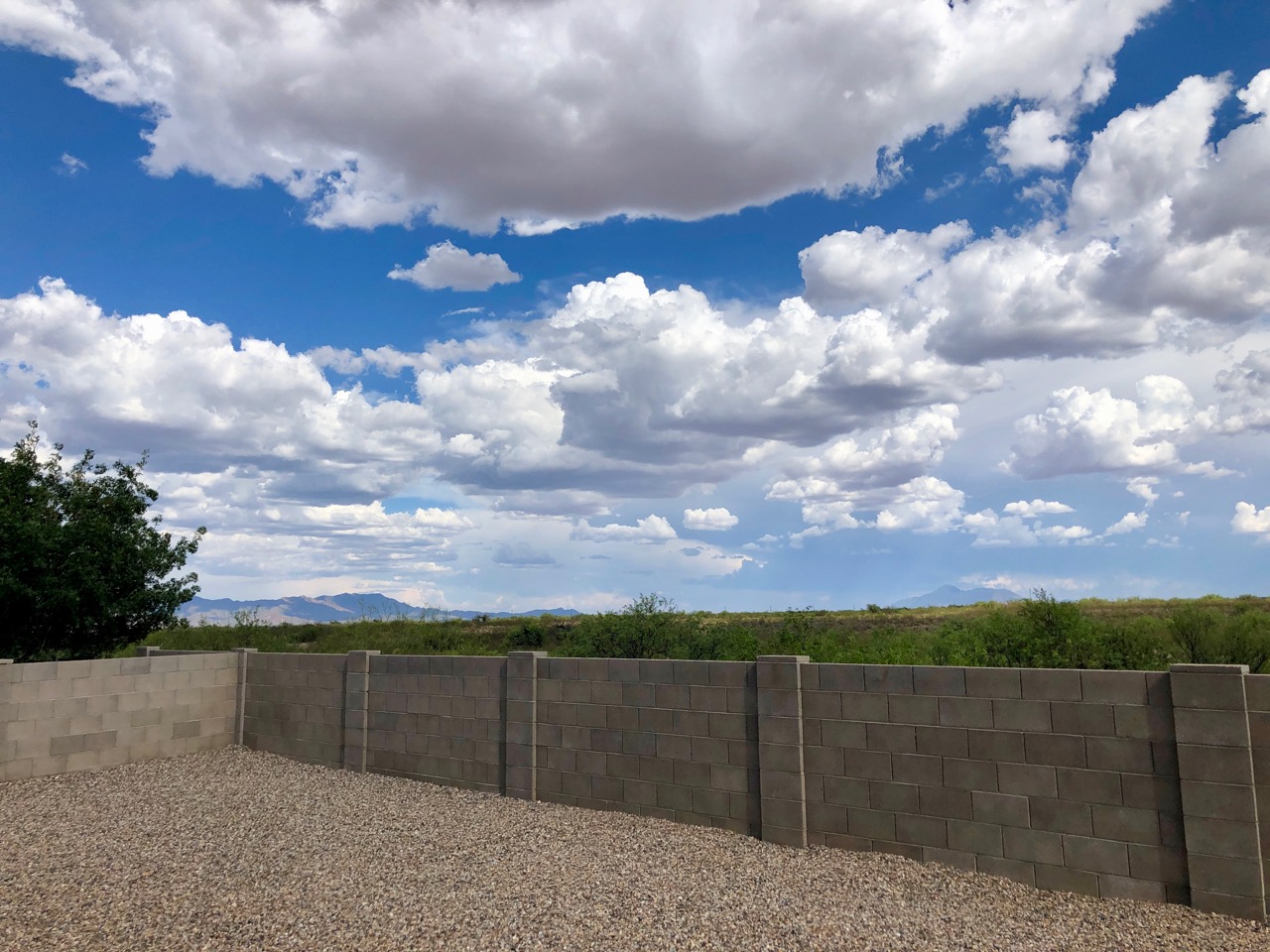 There is just something about those wide open skies that has always attracted me like a magnet to the west.

The factors I looked at were cost of housing, areas for hiking and bicycling, temperature ranges in the winter, conveniences for medical care, groceries, bike shops and restaurants. If you remember I mentioned a couple of websites I was using to compare towns. Those both proved to be accurate and very valuable. Plus a few people that knew this area well provide great information.

I did have a Plan B just in case this move did not work out. It would not take long to figure out that I did not need that Plan B. Before I decided to move I asked myself "if I put this much money into the house, the eroding bank along the driveway, updated appliances and floors, a new roof ... would I still want to live here?"

The answer was always 'no' ... it was time to move from 'the tropics' of Southern Indiana. 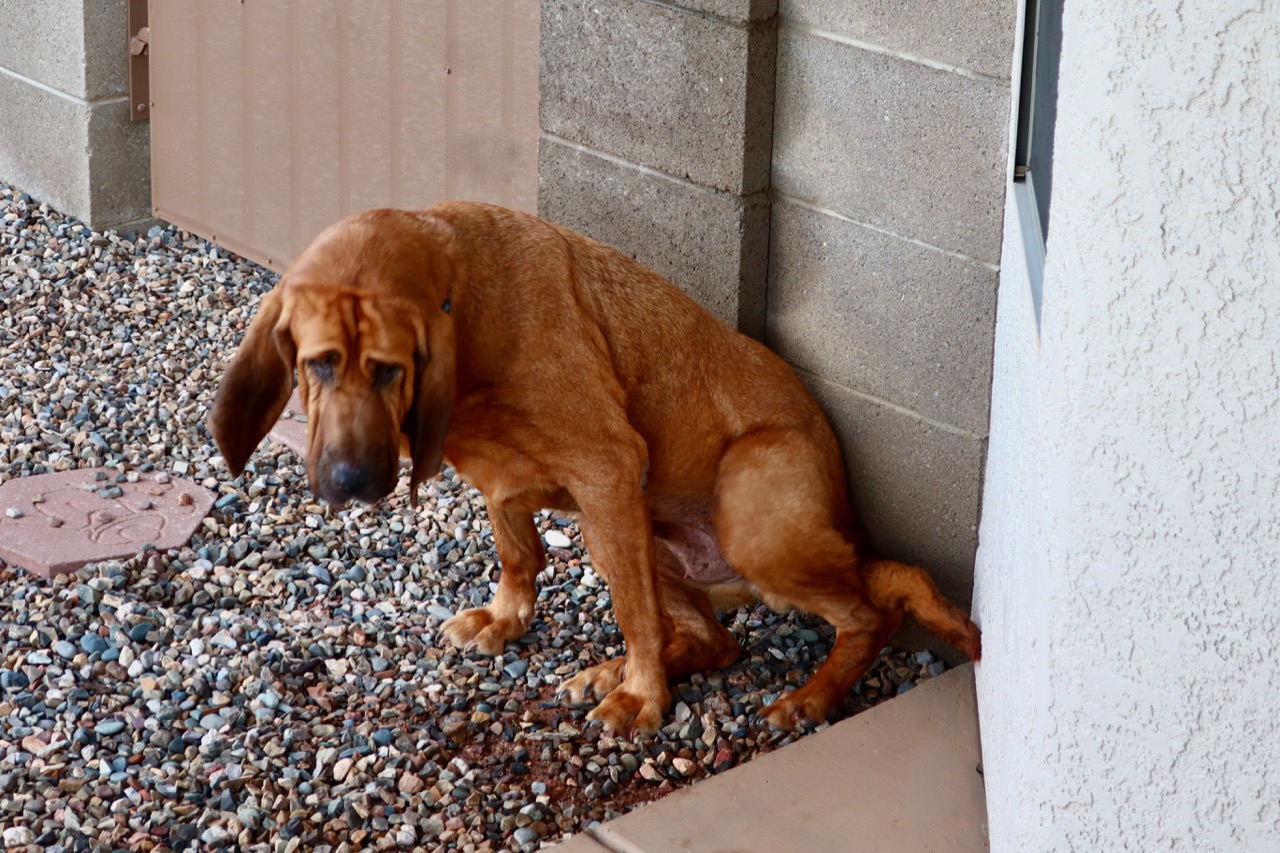 This was Stella's thought process this morning trying to find that perfect spot to take her morning nap after her walk. There was some scratching at the rocks to clear out, some indecision, but eventually she came to the best area to sleep. 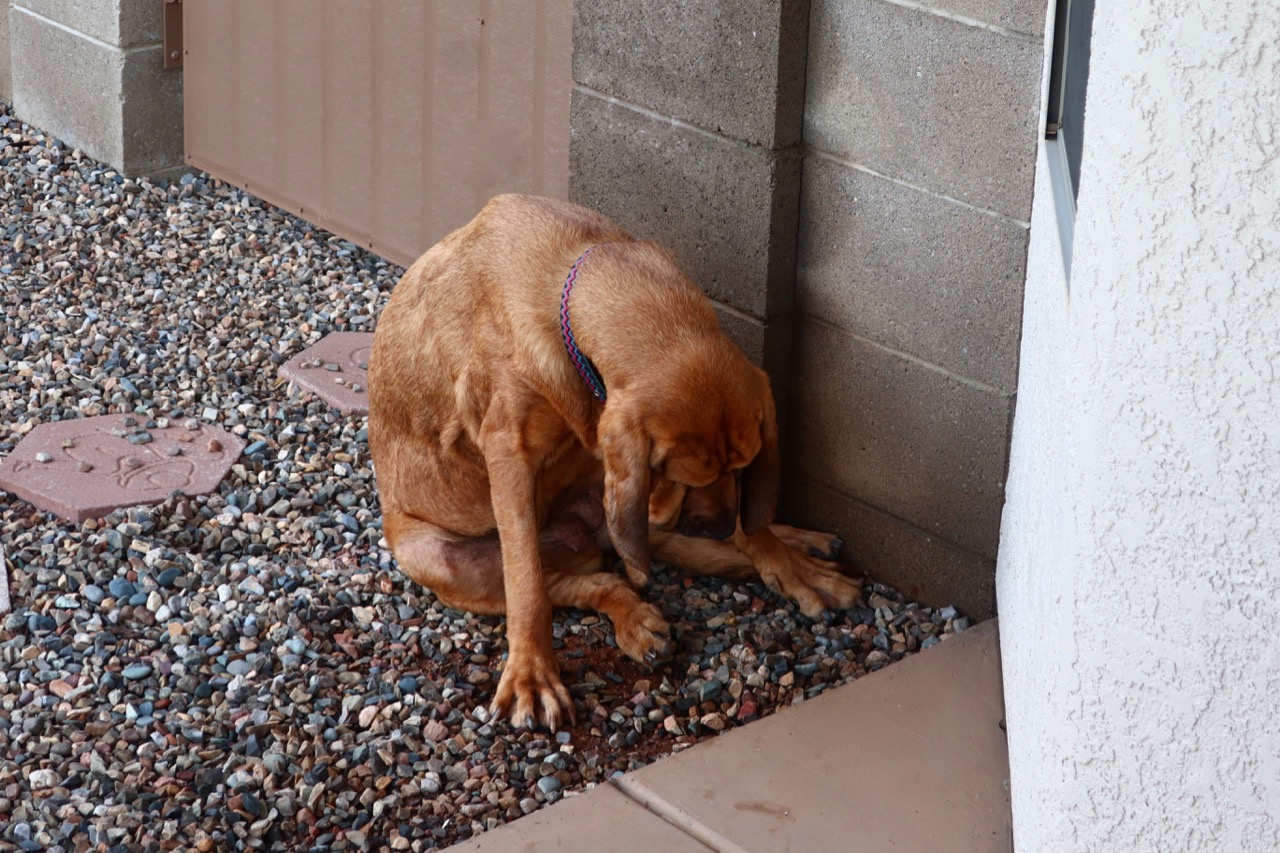 That gate behind her reminds me how she tried to dig herself out of the yard the day I was out buying groceries. You would have thought a yard with a fence, a patio with shade, plenty of water and even the back door left open so she could go into the house if she wanted ... would have worked. But her separation anxiety kicked in ... she was howling "the loneliest howl ever" according to my neighbor across the street. When he came over to check on her ... she was digging through the hard soil to get under the gate. 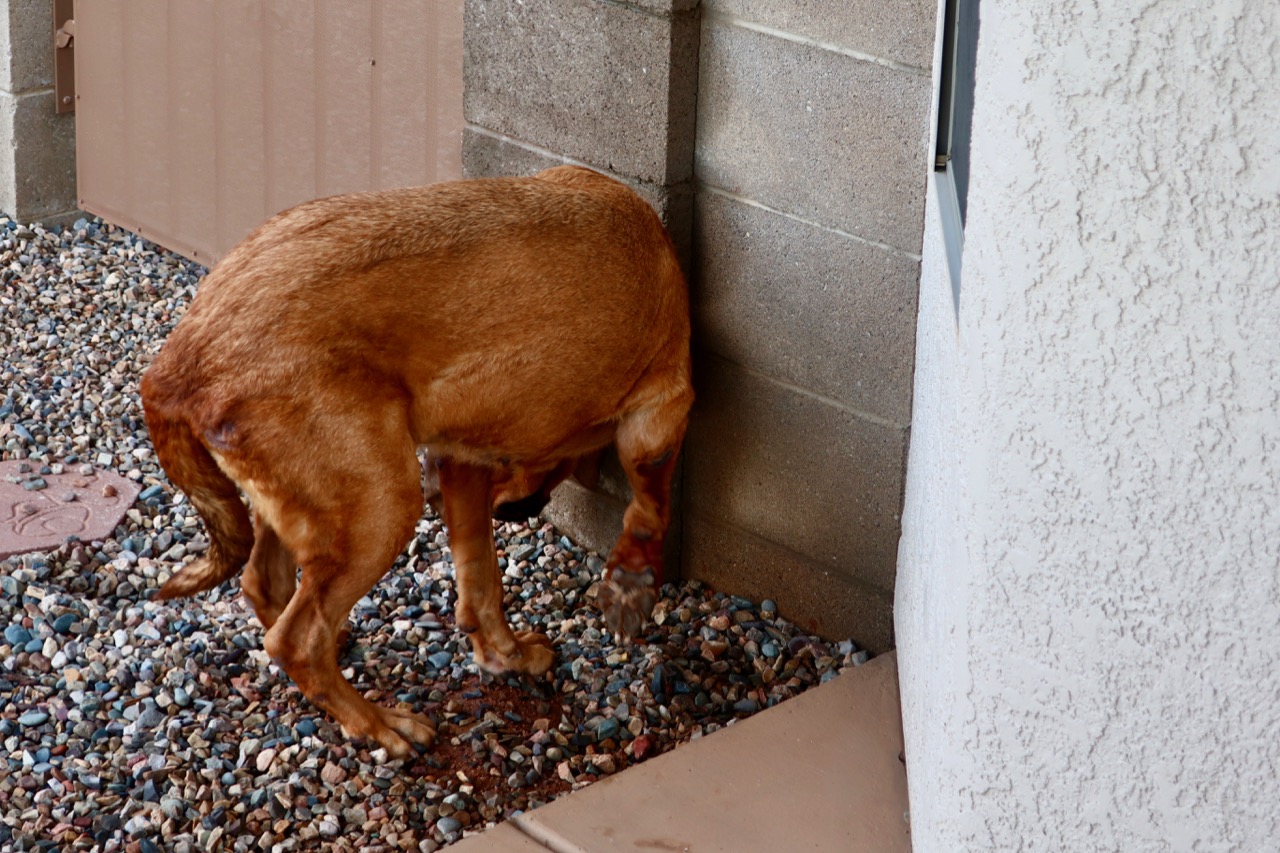 I have other stories about her anxiety out here in the west, but that is for a later post. 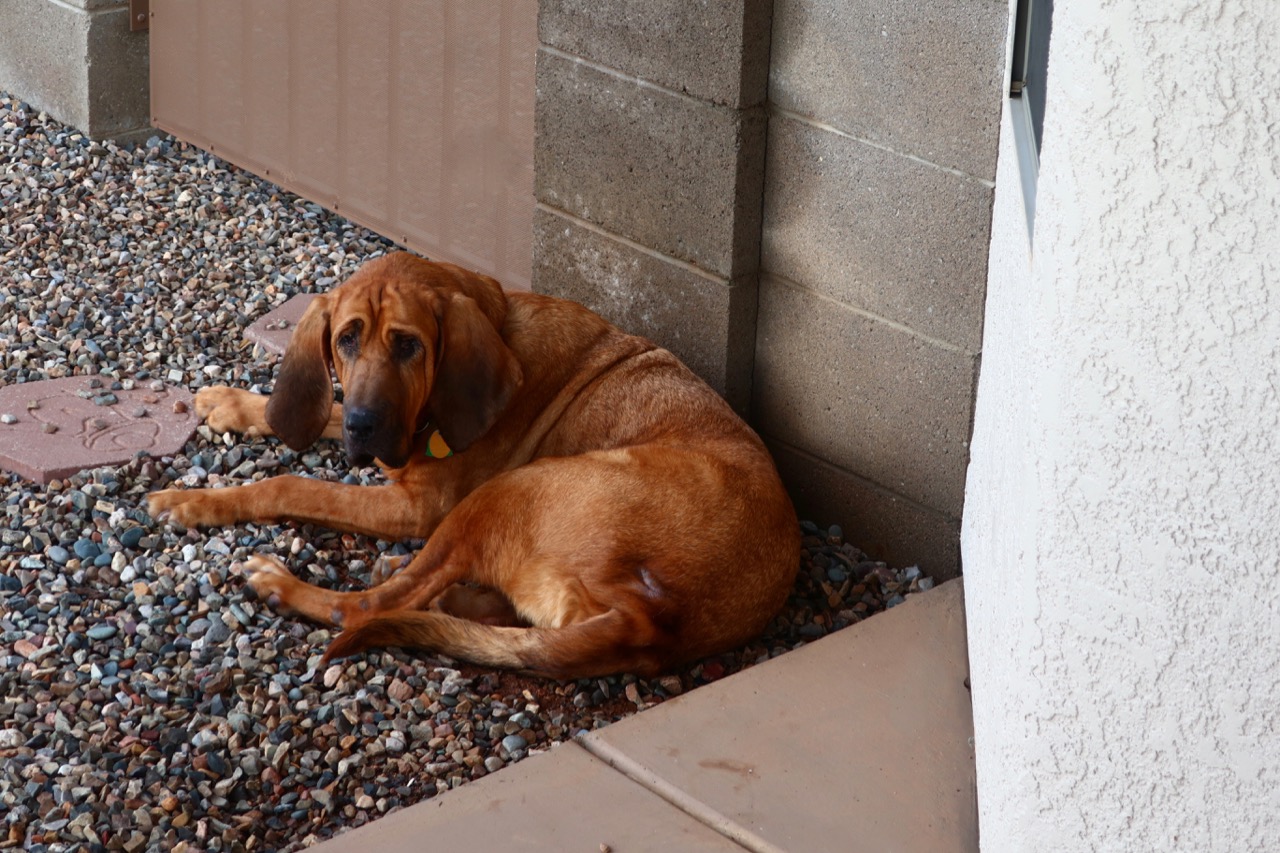 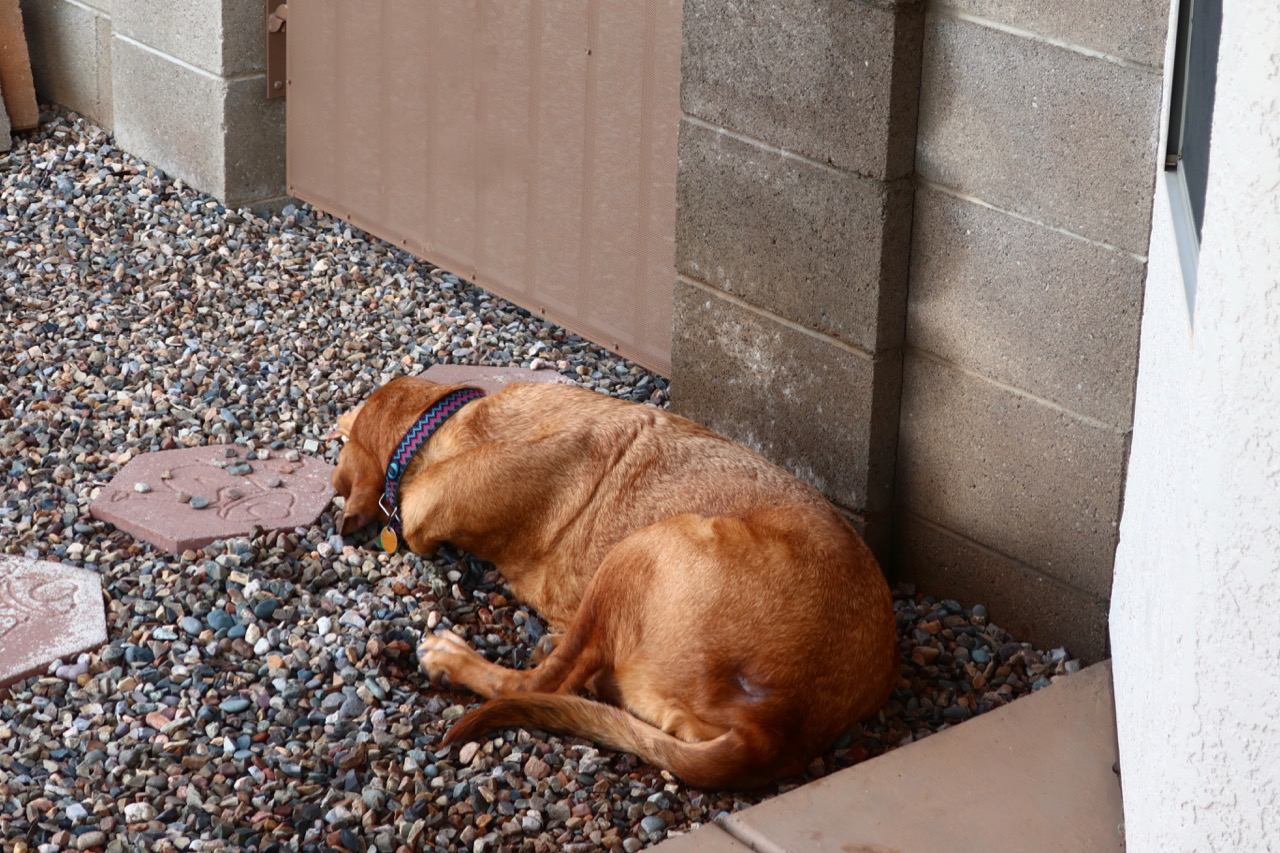 How can I go from no neighbors to having one on each side of me, 20ft away ??

I thought long and hard about that. You would not believe how much I thought about that as I looked at the pictures of the house I bought, the neighborhood via Google Maps Street View. I had not had neighbors that close in 22 years!! What would it be like? Could I hear them talking if they were that close? What would it be like if they were 'bad' neighbors or like to have huge parties?

The person I bought the house from answered a lot of those questions I had. After I moved in I found out more information about the 'hood' from those that lived near me, or next to me and have been here from a few to many years. It's a quiet neighborhood and safe enough that you see kids walking in small groups or riding alone on a scooter. It so quiet that I am even surprised at times.

It's a great location and neighborhood.

It did not take long to get everything set up. The previous owner had left the utilities on, so the same day I moved in, I found their locations and phone numbers on Google Maps then had all the utilities changed to my name that afternoon with automatic payments set up. Since I did not bring anything the hounds and I were moved inside the house from the UHaul trailer within an hour.

From all the research I had done before I decided to move here, I had a pretty good idea where all the stores were, the bike shops, the main streets in all four directions. I was so familiar with the map that it felt like I already lived here as I drove through town that first time. There was nothing hard about this move.

I tried to keep the hounds eating at the times they were use to. That seems to be the deal for their breakfast at 7:30 Indiana time but for lunch they have both switched to local time. They are still eating between 11am and 12 noon. 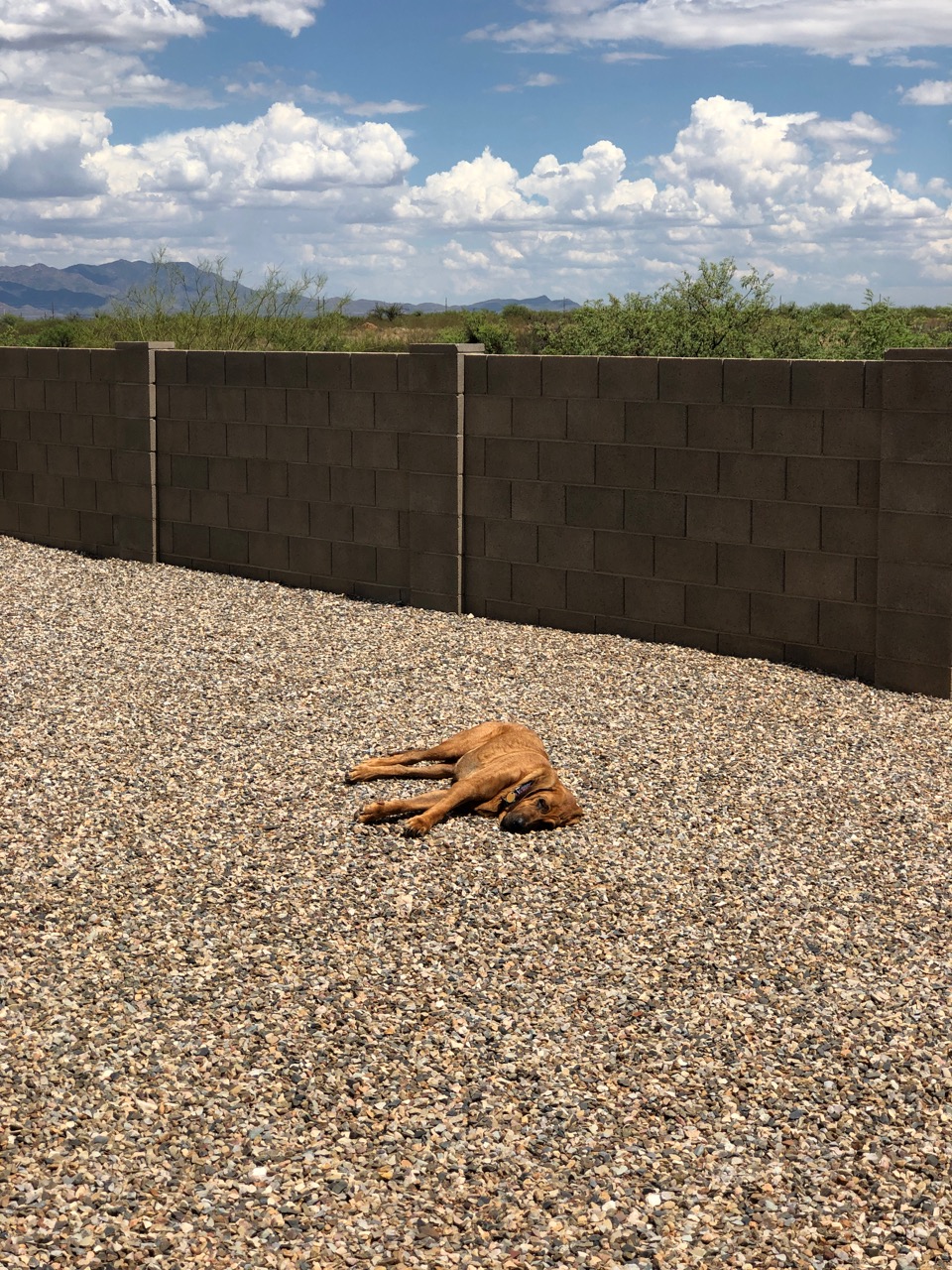 Stella still likes a short after lunch nap and does this every day. Not long but just long enough for that hot sunshine to help those aching hips.

I thought I'd get her another bloodhound to keep her busy but she wasn't too interested as you will see in the next three photos. 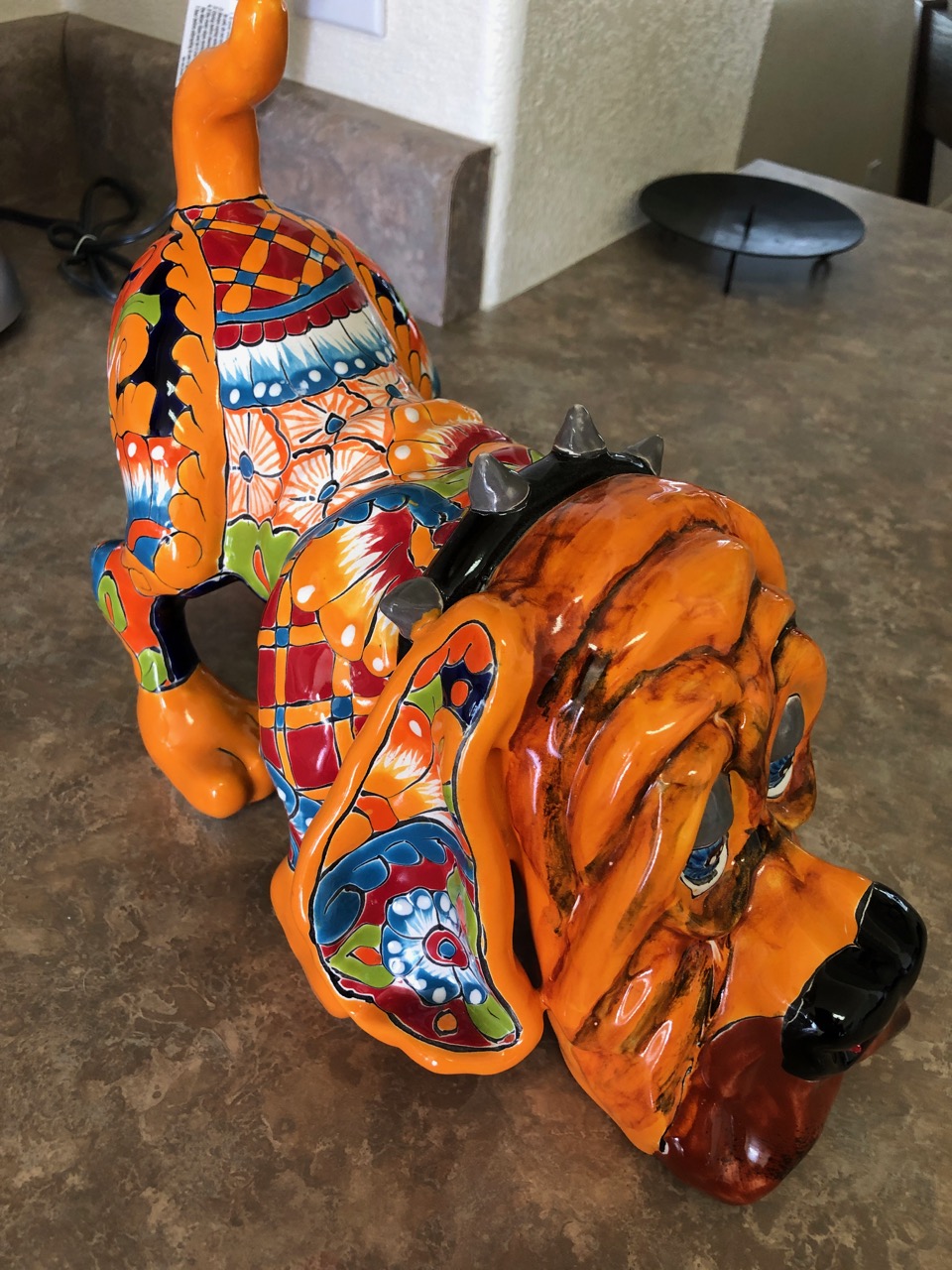 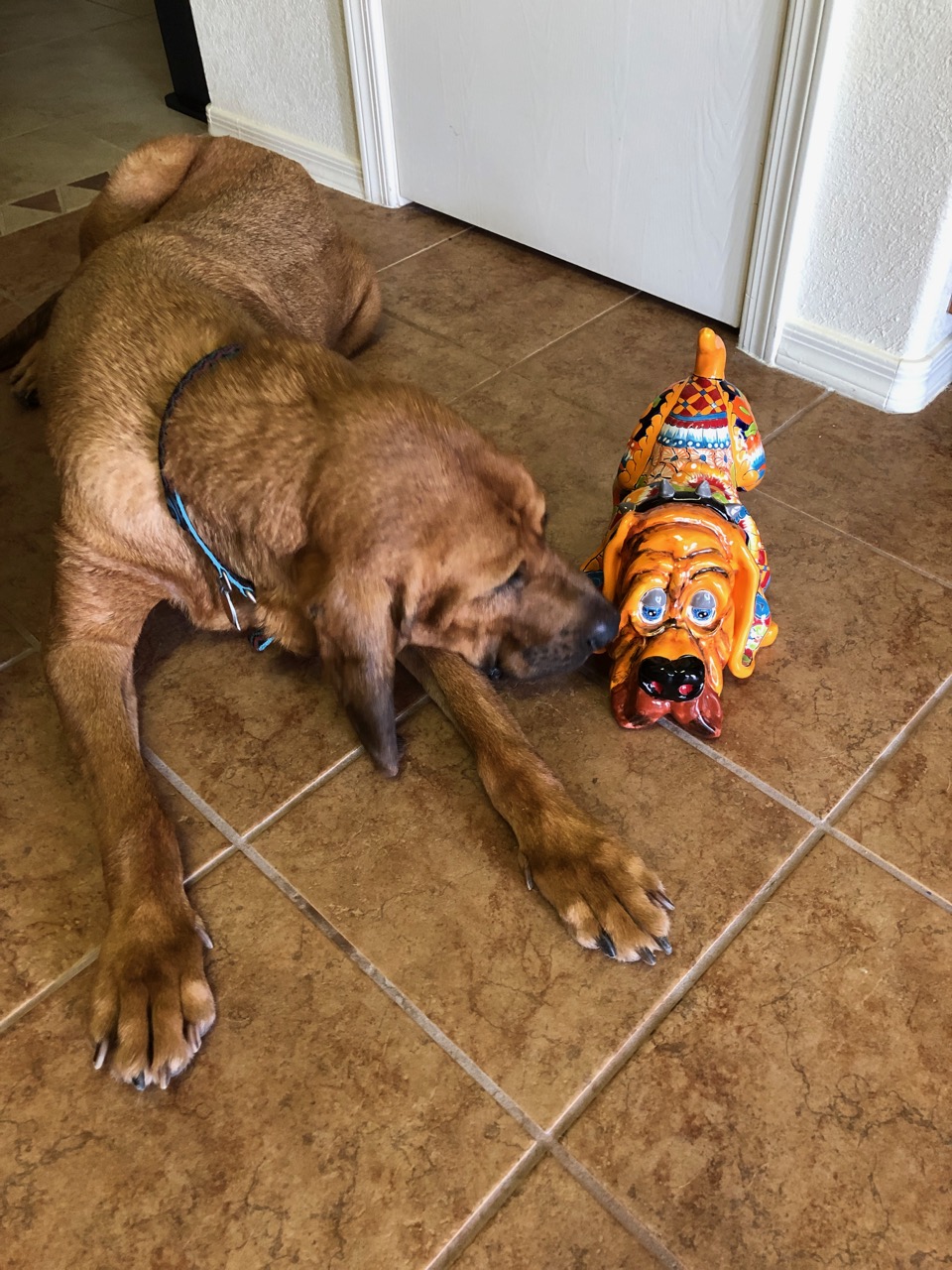 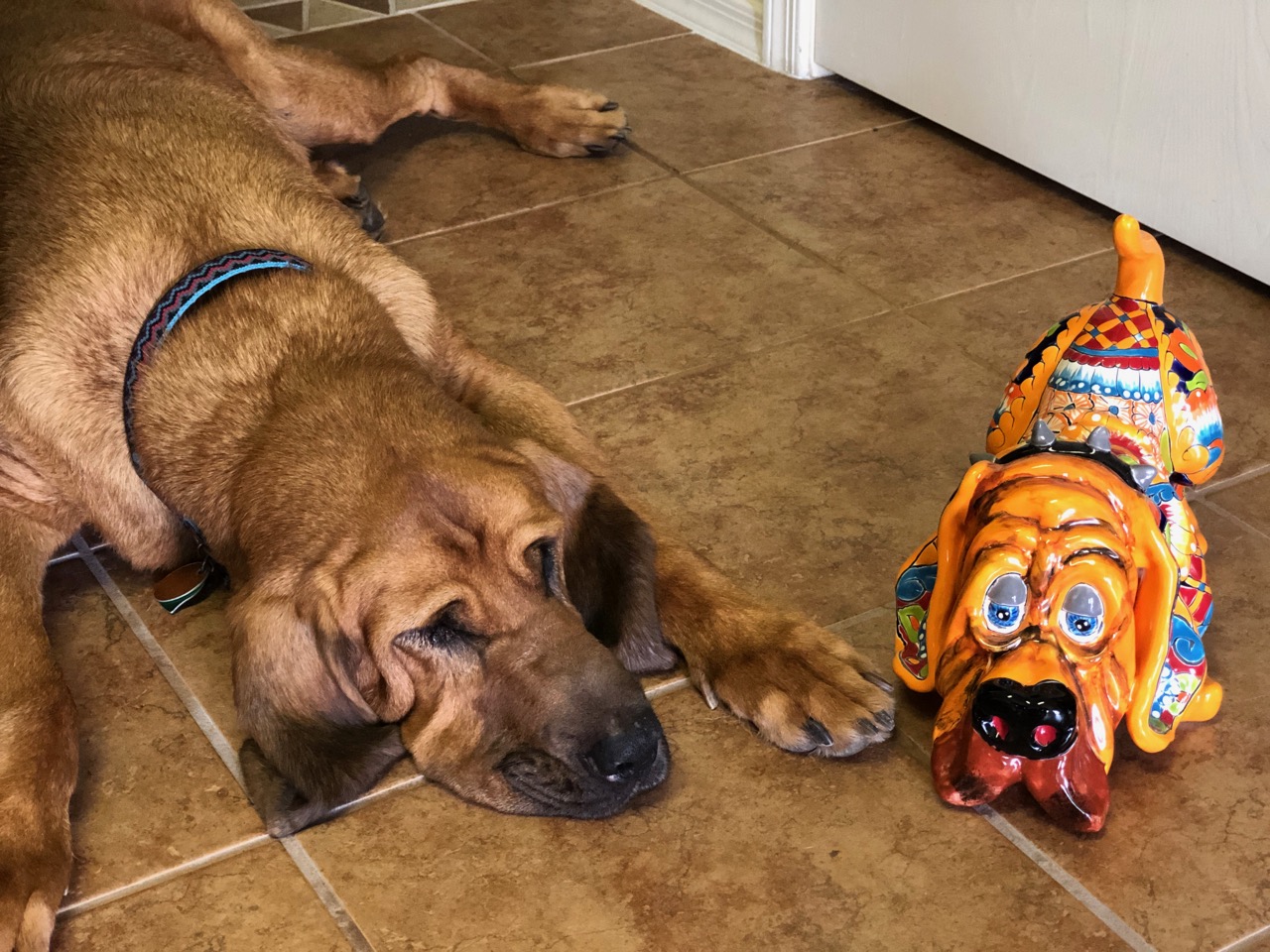 She still does not like the sound of thunder and since this is the rainy time of year, she will have to hear loud thunder and see great lightning from inside the house for about the next 6 weeks from what my neighbors and my research tells me. 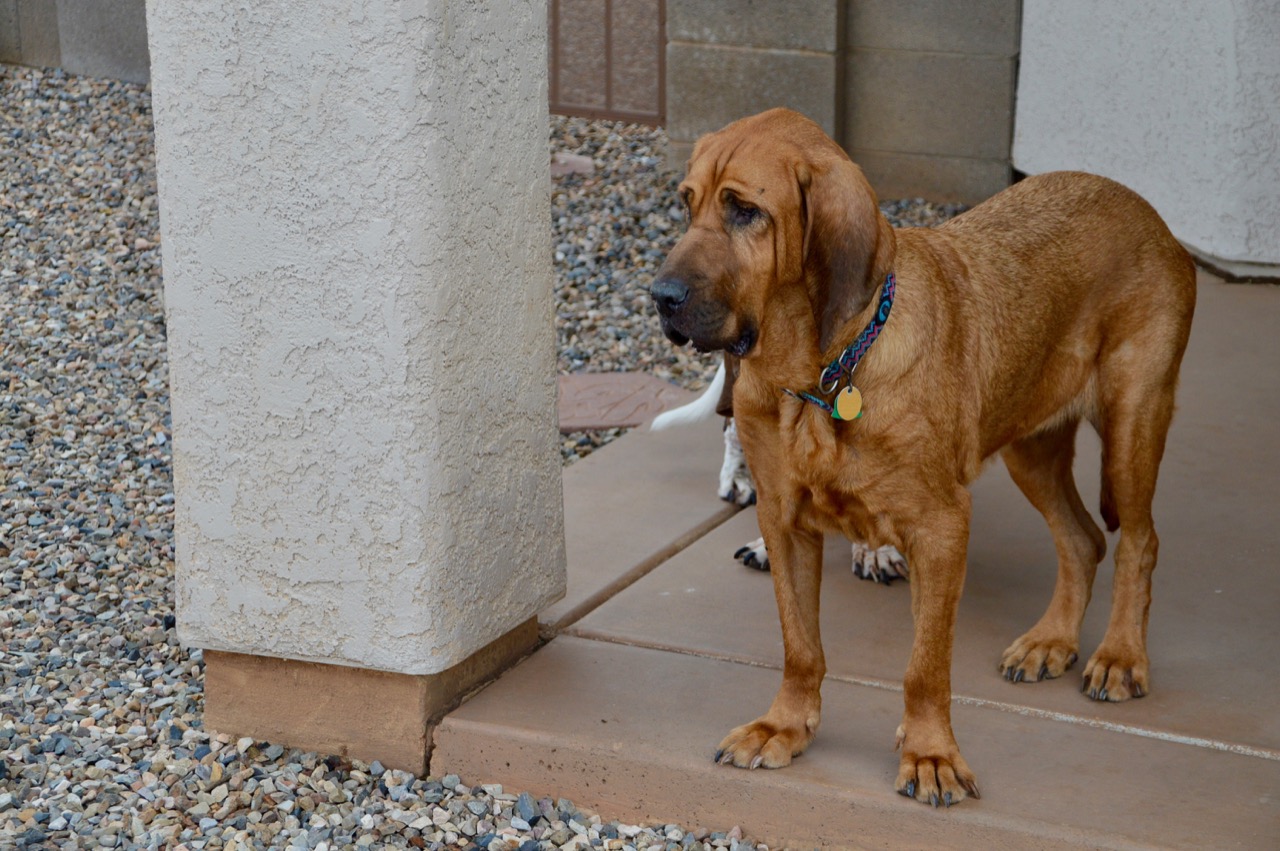 What differences have I noticed living here?

- Well like I mentioned, I get up earlier and go to bed earlier.
- Less computer time, less tv time and MORE time outside doing something or exploring the area
- I ride a bike 4-5 days per week, averaging 13mph for 15-22 miles per ride. There is a lot of gradual climbing here and a lot of panting as I get use to the higher elevation.
- People are extremely friendly and like where they live
- No matter how the monsoons are, total annual rainfall is only 11" and most of that comes in 6 weeks
- College football games will start at 9am in the morning now
- I watch my Reds games at 4pm most afternoons instead of 7pm .. IF I am not out on a local drive
- My mailbox is down the block and around the turn with 20 other boxes
- Heidi takes a lot more walks than she use to
- Stella runs and trots on her walks a lot more than she did
- I have maps for bike riding, maps for hiking trails and probably more area to explore than I can see in a lifetime
- Groceries and eating out are more expensive here
- I'll gladly trade paying a city sewer service in exchange for no septic tank
- It was the easiest experience at the Dept of Motor Vehicles I've had in my life
- There's a great bike shop in Bisbee AZ ... like a museum and a great owner to talk to
- Stella has experienced daycare for the first time
- With her anxiety and my need to buy groceries and furniture she had no choice but 'daycare'
- They loved her and said all she did was sleep the whole time she was there
- I'm still waiting on my couch and loveseat to be delivered 52 days after I placed the order
- Luckily they sold me a nice chair from their showroom floor so I had something to sit on
- Heidi misses her grass yard
- Stella does not seem to mind there is no field to walk through ... Sadie would have been irritated
- I don't ask nor dwell when the question pops into my head "why didn't we do this sooner"
- Yes, I did research to find out when was the last forest fire in this area. (2011)
- I have NOT seen my first rattlesnake, my first scorpion, or my first tarantula
- I like the 4Runner, I DON'T miss the Mini Cooper, I DO miss the Toyota FJ
- I have a lot more friends wanting to come visit me compared to when I lived in Indiana
- I like blogging and wish at times I could be as open as Al is over at The Bayfield Bunch