Too Hot To Hike This Afternoon 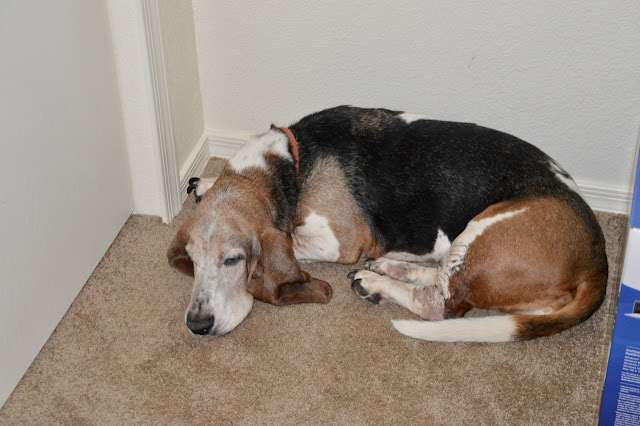 I keep forgetting how hot it gets outside starting around 10am. By 1-2pm it's like an oven outside and any thoughts of taking an afternoon hike have to be slid to the side for another day. Those hikes I did last week and blogged about were in temperatures in the 80s, so that is the difference. I had looked in my book for more details for hiking the Lower Brown Canyon. It is about 3 miles out and another 3 miles back with some southern exposure on a sunny day like today. 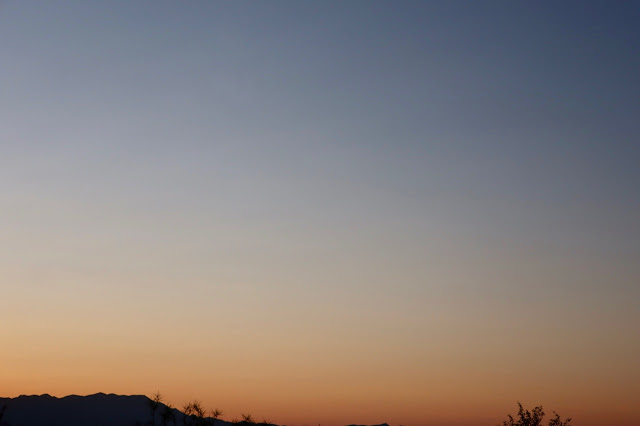 Just like any other morning the hounds wake me up with their head shaking, ears flapping, metal tags making noise. I have no doubt they are on Eastern time and may never change. This morning felt different though. A clear sky, a warm breeze from the SE as I opened the door. The sun was barely rising when these photos happened. 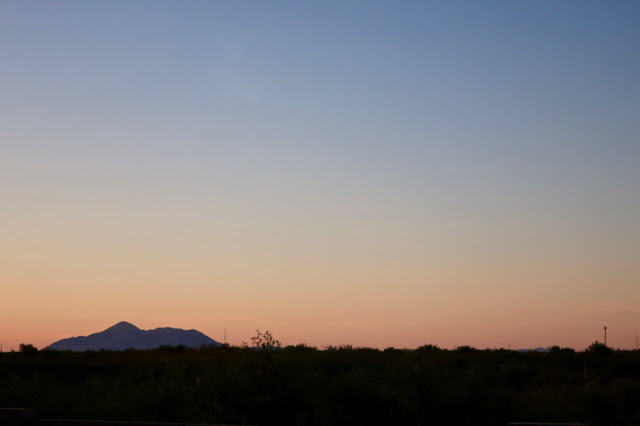 Hard to believe that small mountain sits inside the Mexican border. 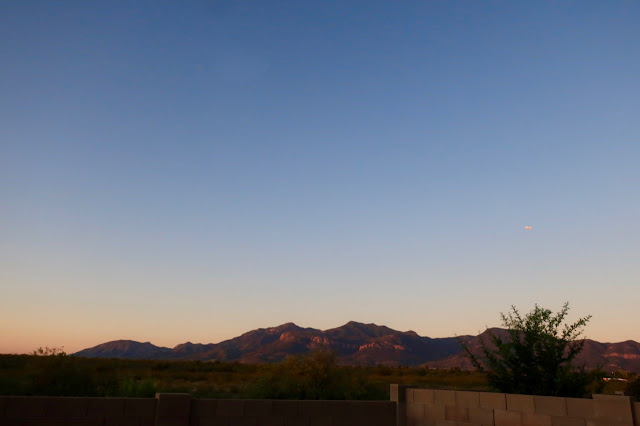 If you look closely to the right you can barely see the Aerostat was launched for the first time in weeks. Right after taking this photo I did not even bother to make coffee. Changed into clothes for the day and tied my shoes while Stella whined for her walk ... and we were out the door. She was energetic today ... trotted down the block and just about the time she crossed the street ... she stopped and turned hard enough to swing my arm around with the leash in hand ... there was a scent in the middle of the street she had to check out and it was only a scent ... I saw nothing in that area. 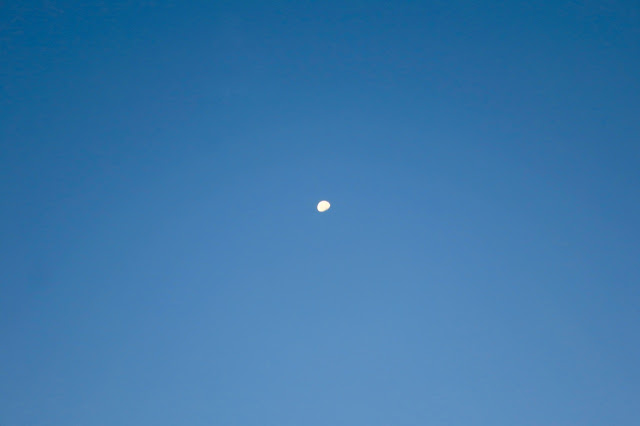 As we stepped into the lot she kept trotting, tail upright and a smile on her face. (mouth open) She ran out ahead of me as far as the 25' retractable leash would let her. She was in the mood to run today I guess but like I said a few posts ago ... here is no way around here she can be off the leash. She would stop and sniff the air in certain spots ... like that huge smell of bacon coming from the exhaust vents of a nearby hotel. I couldn't get her to move.  LOL 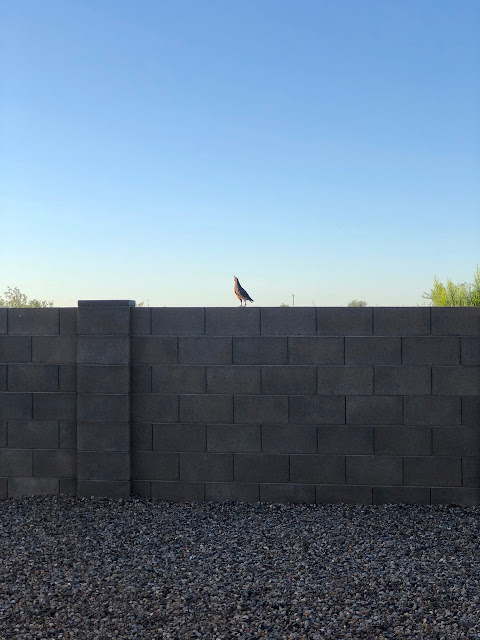 After the walk I had just sat down with my first cup of coffee when I hear a loud distinct bird call. I have no idea what it is but it was loud and sharp enough to wake Stella up. She turned to look where all the noise was coming from. She had finished her walk and she was very interested in getting back to sleep. The increase of bird calls have not bothered her like this since she moved here. 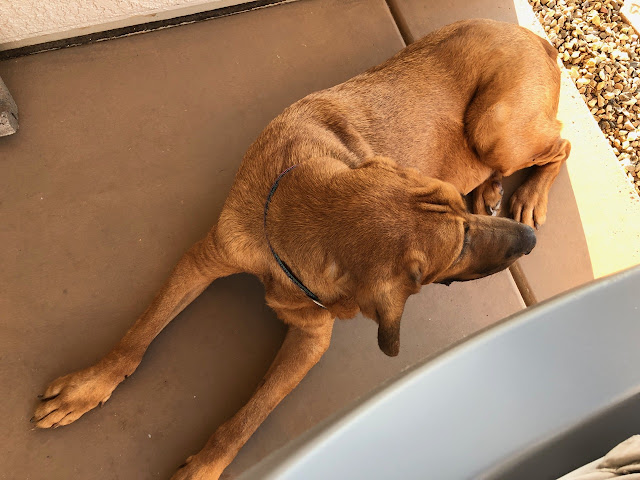 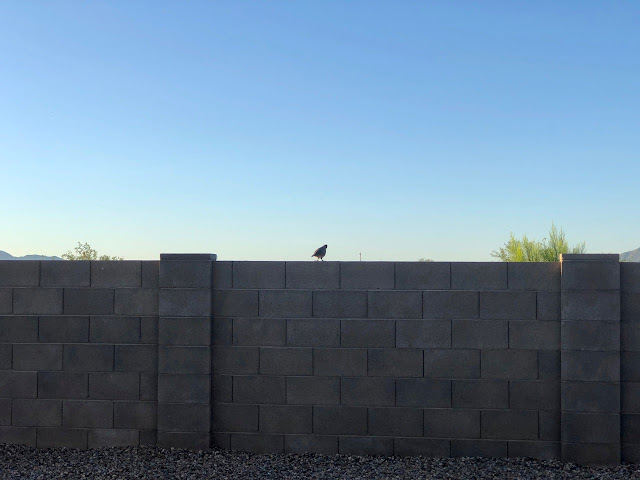 Once Stella rose to her feet I knew our visitor wouldn't be staying long. A couple of steps into the stone yard and the bird was gone. 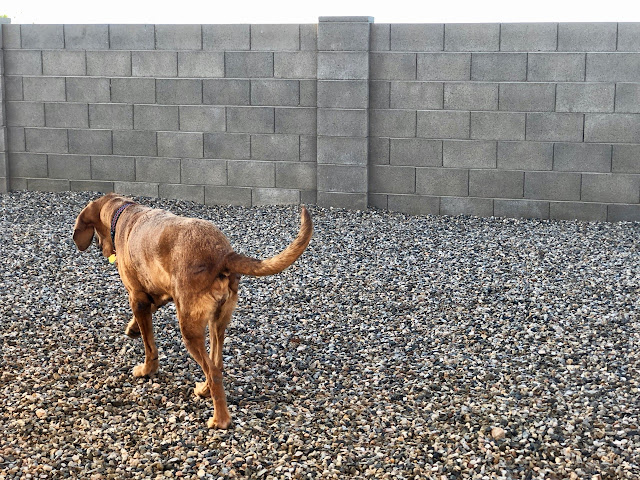 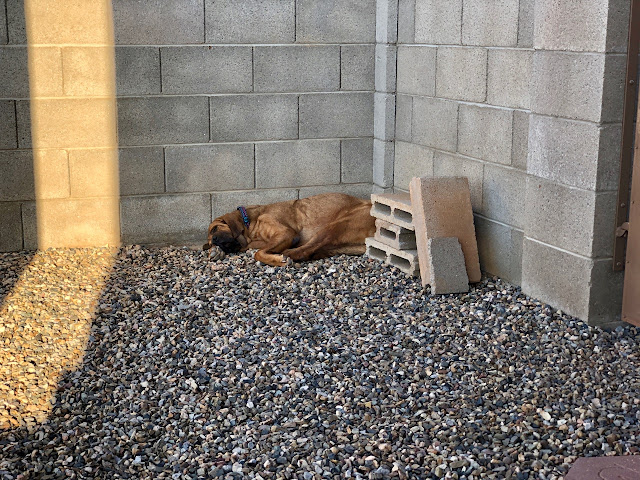 With her walk finished, some bird watching, she decided the best place to sleep was in the shade while I changed into my bike riding gear. I wasn't wasting time today as I went from dog walking to coffee to riding. Those blocks sitting next to Stella bother me so I guess I'll do some "yard work" and carry them into the garage and stack them them in the corner. Out of sight out of mind. 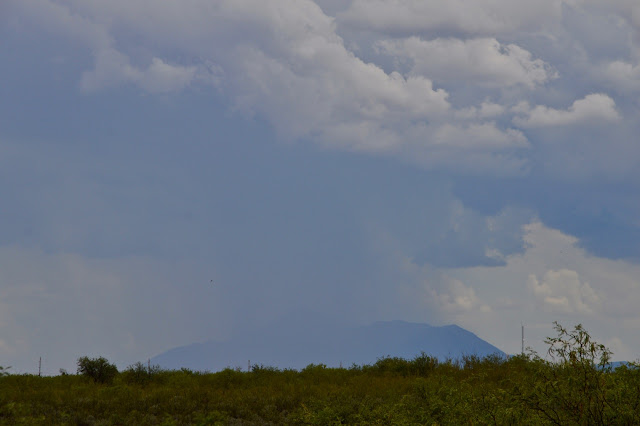 It doesn't happen every day but it could later even with high temperatures and a day full of sunshine. Storm clouds will blow in and before you know it, it's raining. Not good for surprised out of town afternoon hikers or bike riders. 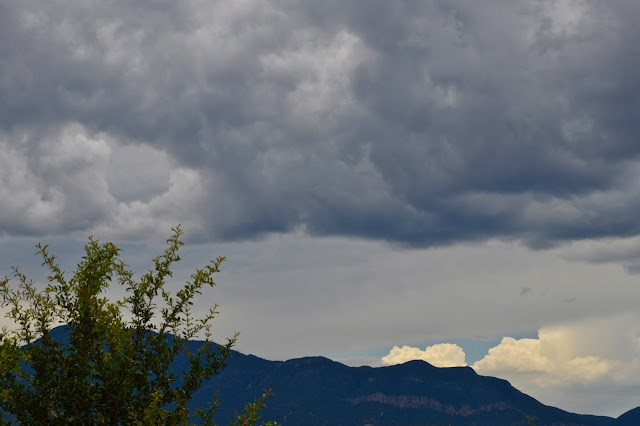 These were not from today but from the SD card I downloaded from the Nikon D3200 from a few weeks ago. Notice the blue skies on the other side of the mountains. 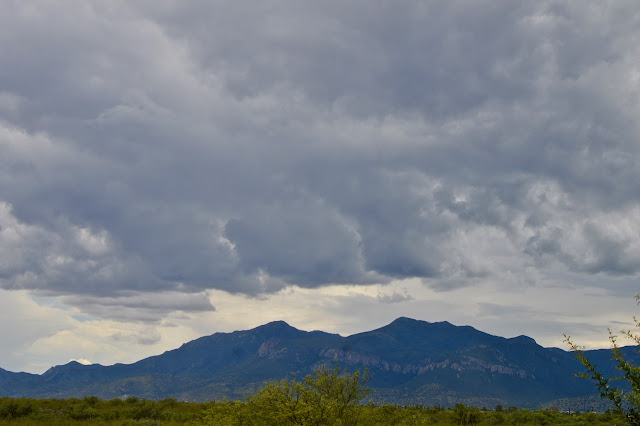 The typical afternoon for the hounds are the two photos you see right here. They might move from the computer room where these were taken, to the living room and to the bedroom as day moves into early evening. They did the same thing as you know, back in 'the tropics' so there are no changes to their afternoon routine most of the time. 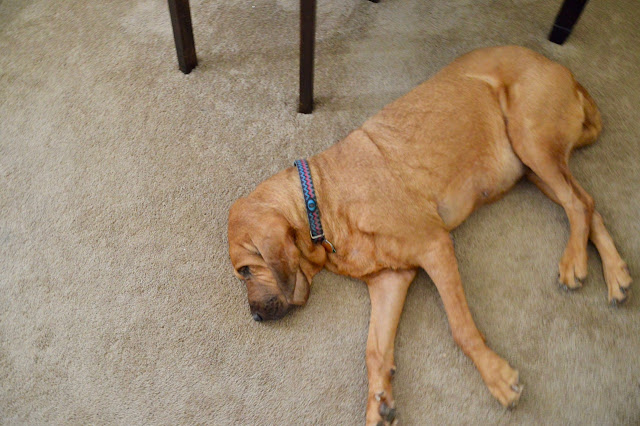 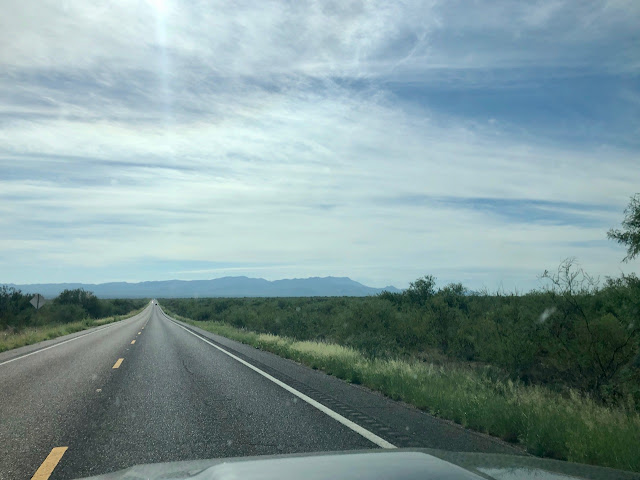 Along with that download I found some photos from our Sunday drive that either did not download properly or it might have been user error, not giving the card enough time to download. If I remember right this is Hwy 90 heading east toward Tombstone/Bisbee. I love traveling through this open land. 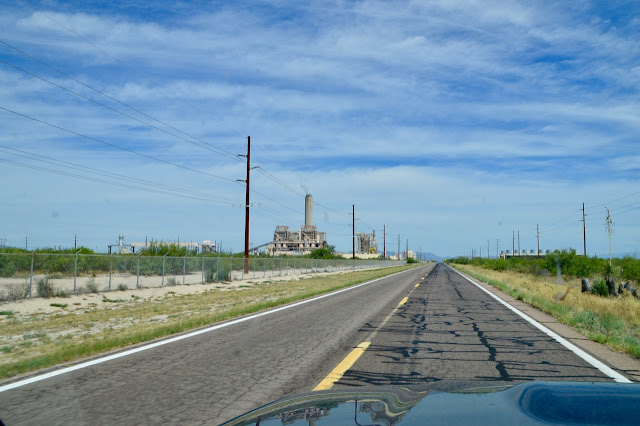 This was on Hwy 191 north of Pearce, I think. To me it looks like some sort of power plant and on the right side of the highway a possible nuclear plant yet I found nothing online about it. Anyone that is familiar with the area know what this is? 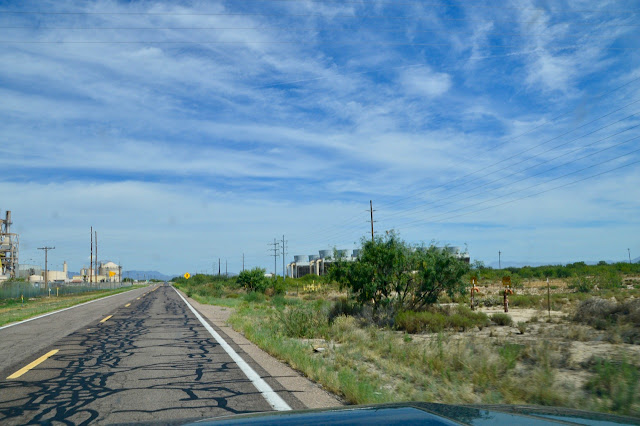 Again, I kept my eyes on the road and one hand holding the camera up in a general direction not knowing if the camera would succeed with what photo I wanted taken. No, I don't use the monitor on the Nikon while driving and still only use the view finder when I'm not driving. 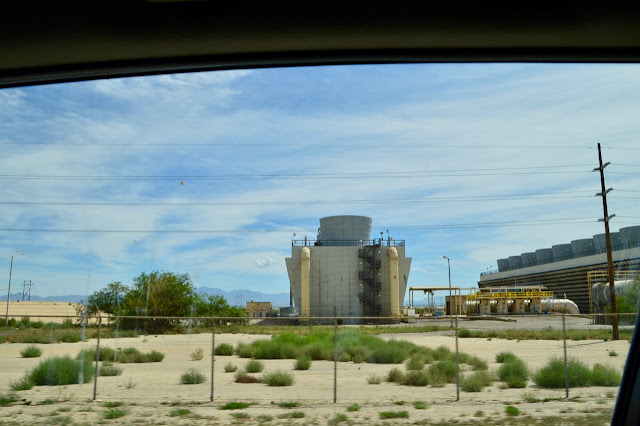 I am thinking about contacting Canon about my G9X and see if they will do anything under the 1 year warranty about the black spots that are on the sensor. I am even a little motivated to package in it's original box and put that into a bigger box to ship it to them via UPS. After checking my memory banks I bought that camera just last January, sad that it didn't work right for at least a year based on how much it cost.

I've been fooling around with different browsers again. Currently I am using Safari with no problems. With their latest updates it is easier than ever to move an icon to my address bar that I can click to unblock the "blocker" so I can open forms I need from certain websites to view them. I may pay everything automatically but I still like looking at the actual utility bills for electric, gas and water.

Google is still the #1 ranked browser but just that word leaves me with a bad taste in my mouth, just like Facebook ... but I still use them. I tried Firefox again for a few weeks and it supposedly gives you privacy while on the internet, but when Facebook can figure out I've been talking to someone about cars, then floods my newsfeed with advertisements for the exact cars we have discussed ... I guess Firefox can't do anything about that.

I have been attempting to drink 100oz of water per day. I know that is between 4-5 glasses with the glass that I use. Even after bike riding in the mornings and the hot afternoons living in the high desert I find it hard to drink that much water.

No ... I don't miss the thunderstorms nor the tornado warnings I left back in Indiana.