Up & Over Montezuma Pass 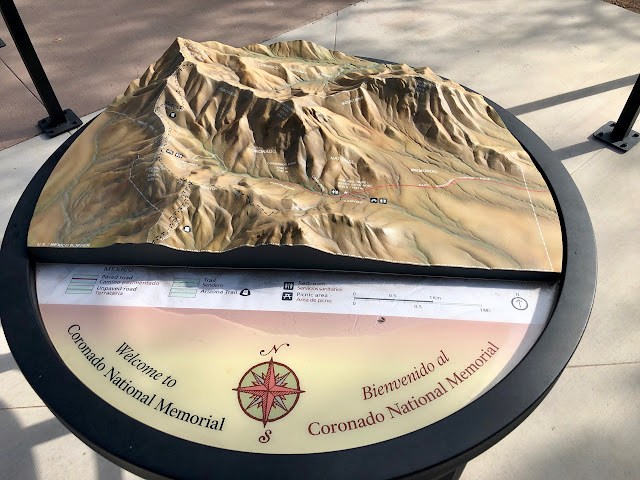 One of my first trips I took was up and over Montezuma Pass. I had a vague idea where I was going, so I grabbed the camera but left the hounds home on this trip since I was going to make a couple of stops. They enjoyed the air conditioning sleeping the day away while I went out on an adventure. 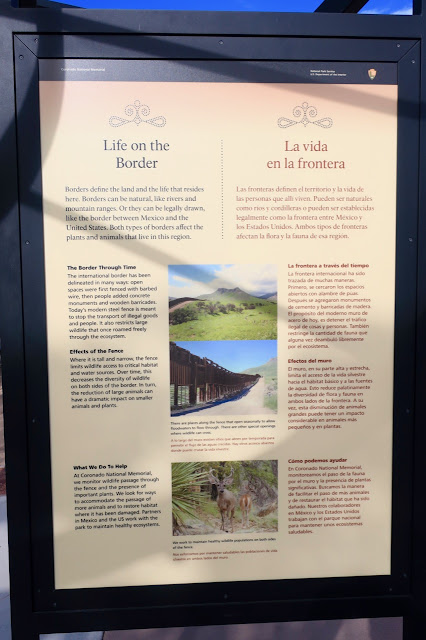 My first stop was at the visitor center. For some odd reason I didn't take a picture of it outside nor when I was inside. I was too early and had to wait about 20 minutes before they opened it. 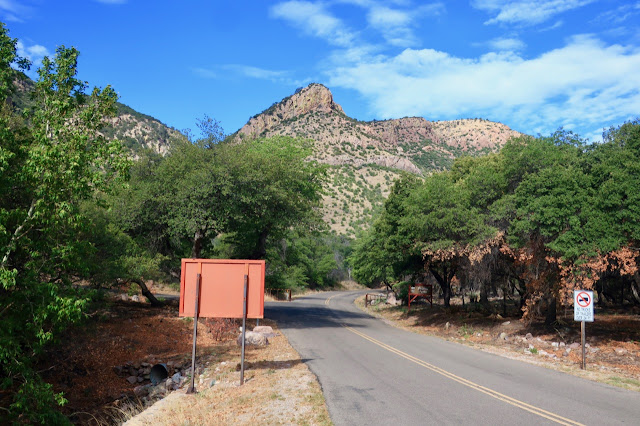 This was the start of my drive over the pass. 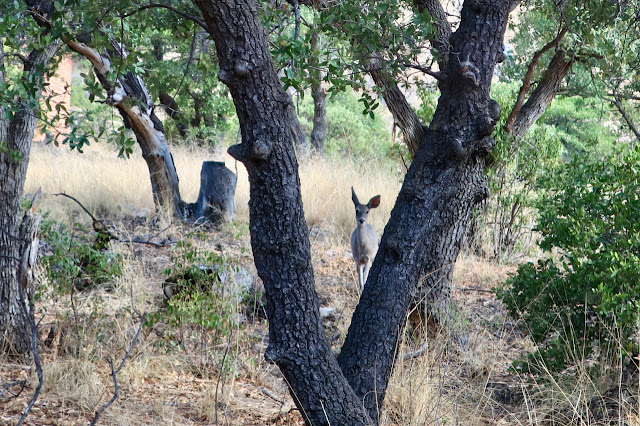 As I was inside reading all of the history I glanced out the window facing the back of the center and had someone staring at me. Of course the hounds would not have been in the building if they had come but I am sure Stella would have been howling from the 4Runner in the parking lot as she picked up the scent of any size of deer. Instead she was stretched out in the house sleeping in the cold air conditioning ... no deer around. 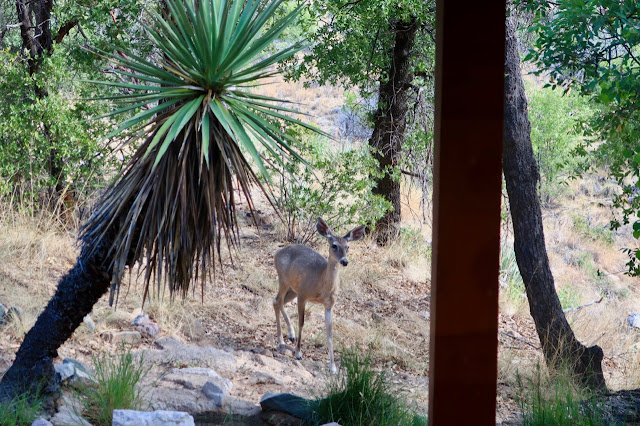 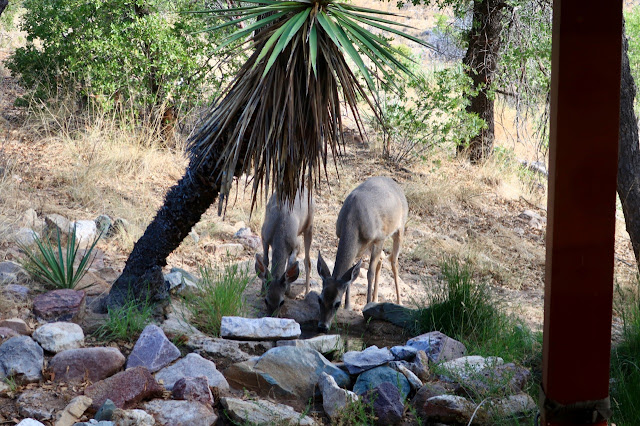 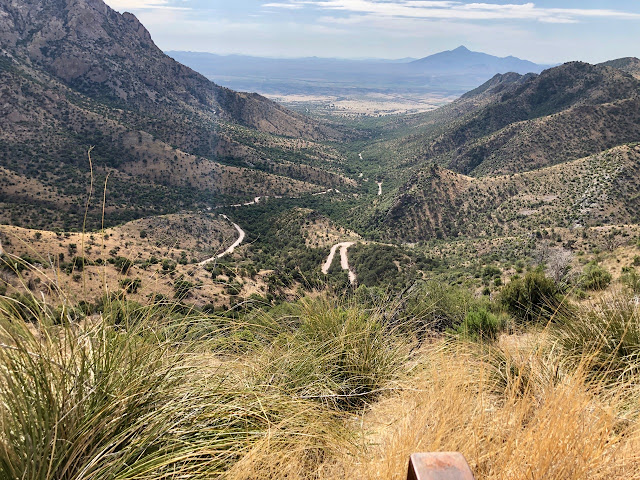 The road going up was not nearly as narrow as the one I drove after this trip but blogged about the other day on Car Canyon Road. There was plenty of room to stop and take photos of my progress. I took all of these photos with different cameras ... the iPhone, Cannon G9X and the Nikon D3200. I don't remember which camera took what photo. 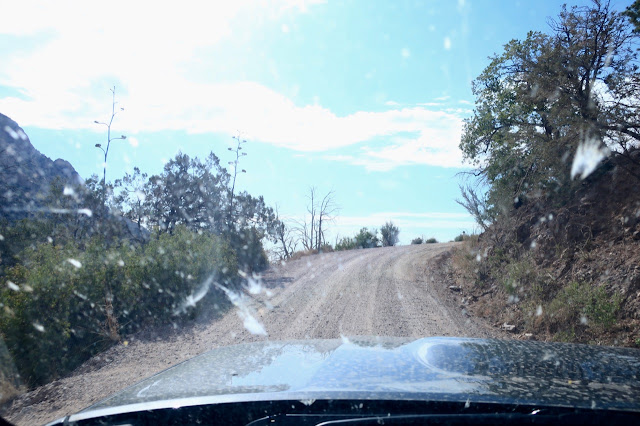 Sorry for the dirty windshield. 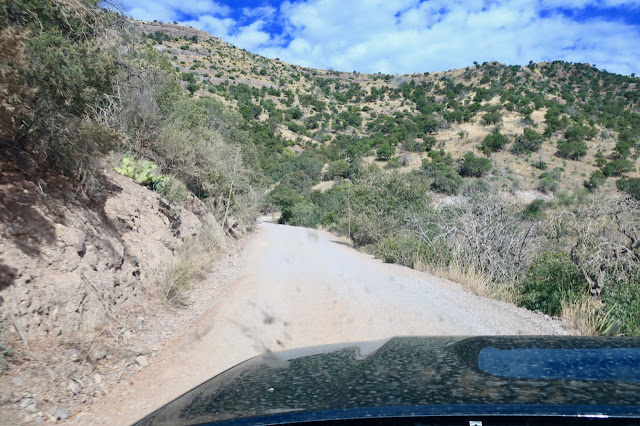 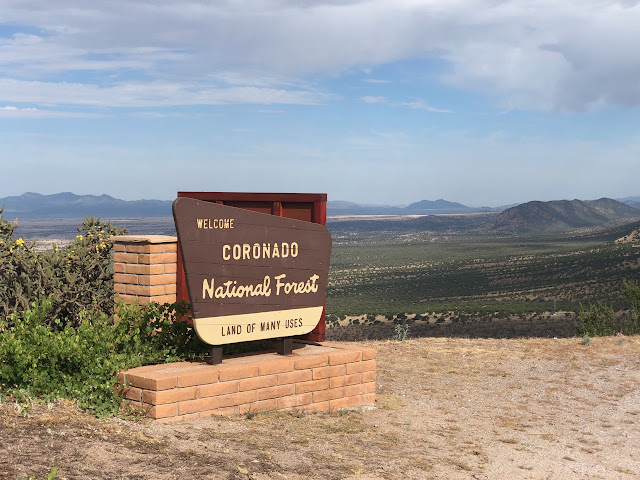 It was quiet and peaceful at the top of the pass. That didn't last long when a car pulled into the lot, slightly speeding. I thought some Sunday morning alcohol might be involved but it turned out to be two loud young kids, a couple of small yapping dogs and an adult that looked like he was the one that needed adult supervision. Maybe alcohol was involved?

Do you know sometimes how you have a gut feeling that you need to leave ... that was me. I left sooner than I wanted or planned but I wanted to get as far ahead of this group as I could. I could sense potential trouble going down the western side of the Montezuma Pass and I didn't want to be involved. 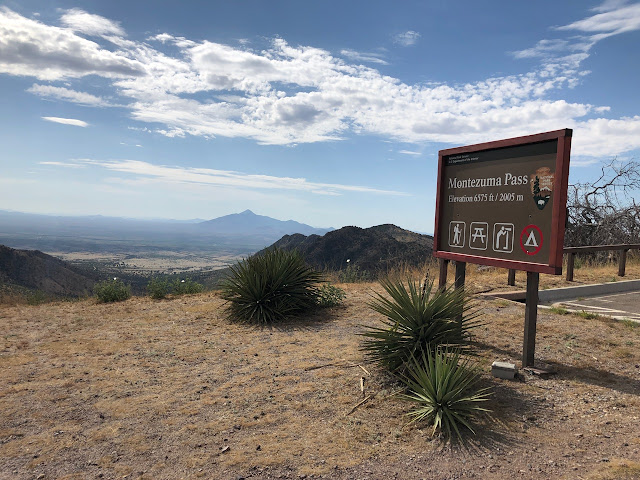 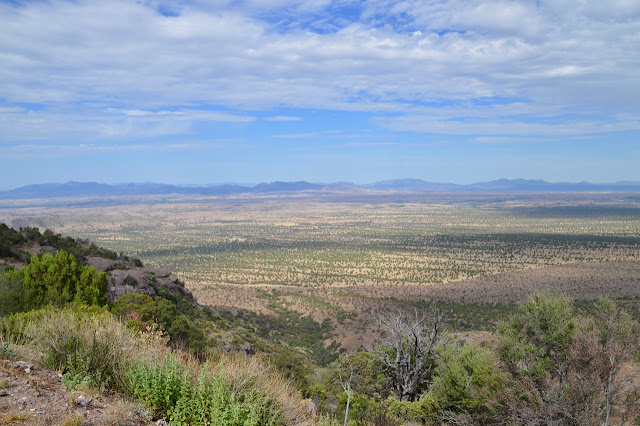 It was beautiful up there as I looked down through the valley towards Mexico, many miles away. All I could think of during the last part of the drive, if this is the place the illegal immigrants want to cross the border ... I could not see anyway they would survive. It was extremely hot and it wasn't even 12 noon yet and there was no way they could carry enough water to keep hydrated. The two 32oz containers of water I brought with me, were going fast as I drove with the windows down enjoying the environment. 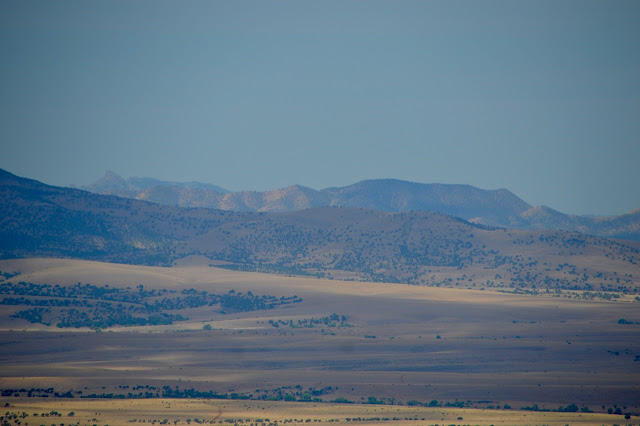 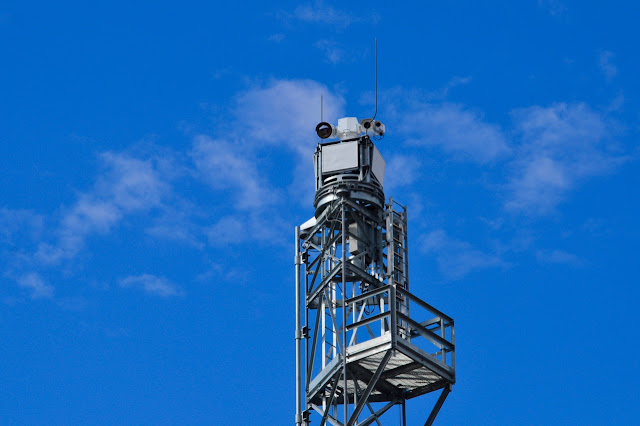 With many miles of land to cover for surveillance, the tall tower of cameras and other monitoring equipment was not a surprise to me at that location. 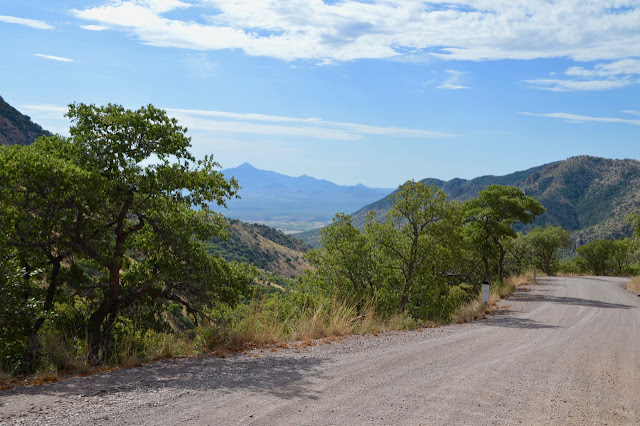 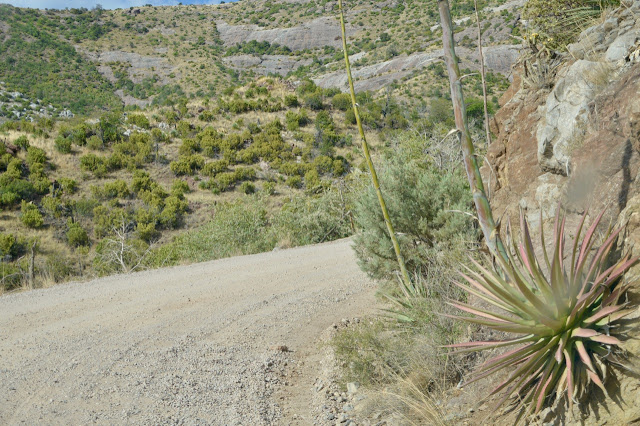 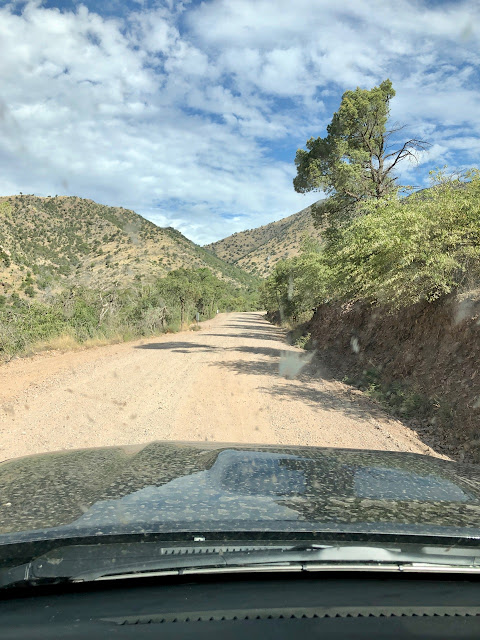 Do you see what I mean when I say no one could carry enough water with them to survive this kind of terrain on a 94° day. I did see warning signs along the way of possible illegal immigrant crossing, telling me not to pick up any hitchikers and beware of any possible unlawful activity. During that stretch of road on the downward side of the pass I met three different border patrol trucks on the way going in the opposite direction than I was. With that many trucks I assumed I was traveling through a popular place to cross the border. 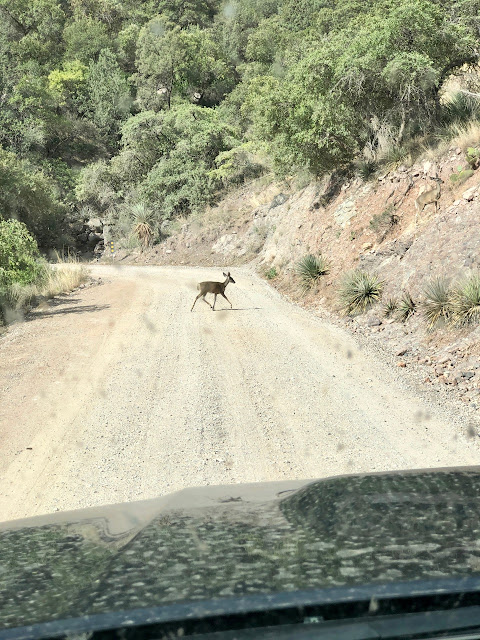 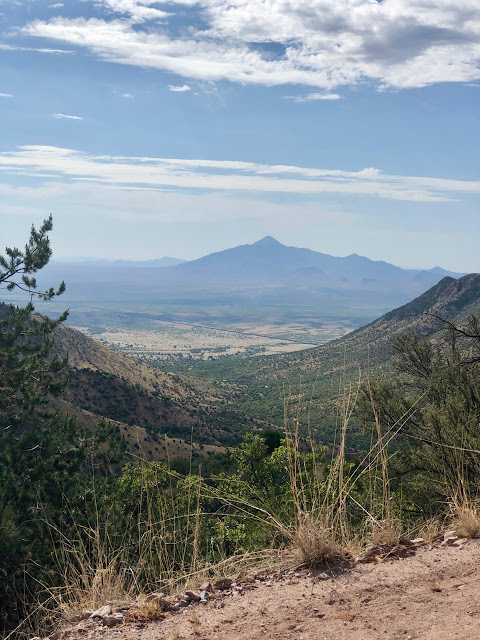 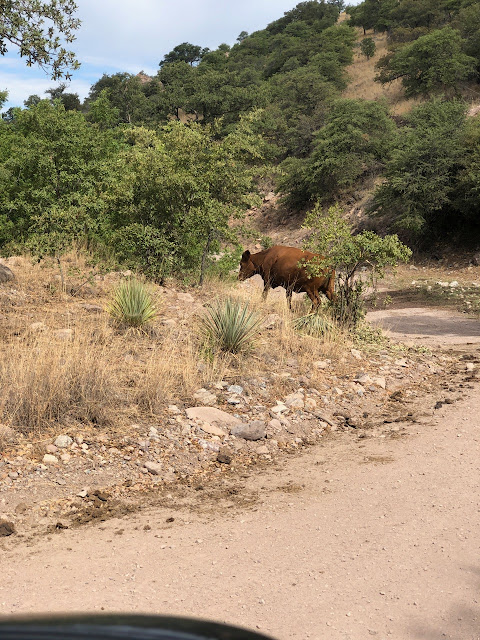 As I came up on one of the healthiest cows I had seen, I couldn't believe she/he was out here finding enough food to eat. Just as I was about to pass him across a dry river bed I glanced to my right and there stood a herd of 10-12 more cows standing under a big shade tree. 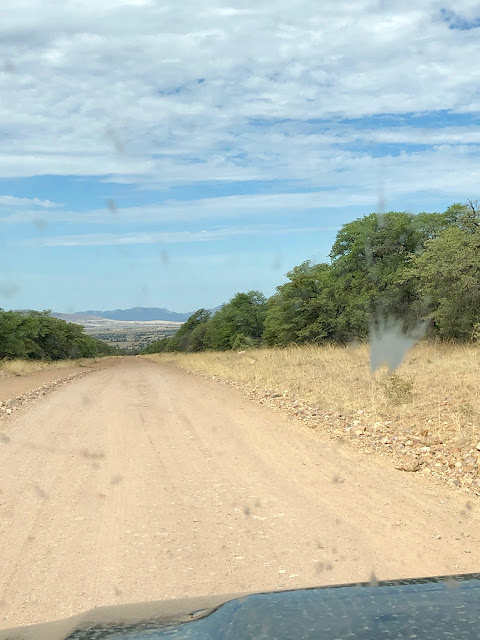 I am not sure how many miles I had driven nor how long ... but when I glanced in my rear view mirror the dust is flying from a high speed vehicle. Guess who was coming up behind me? I had a large lead on them, many miles head start when I left the top of the mountain pass. 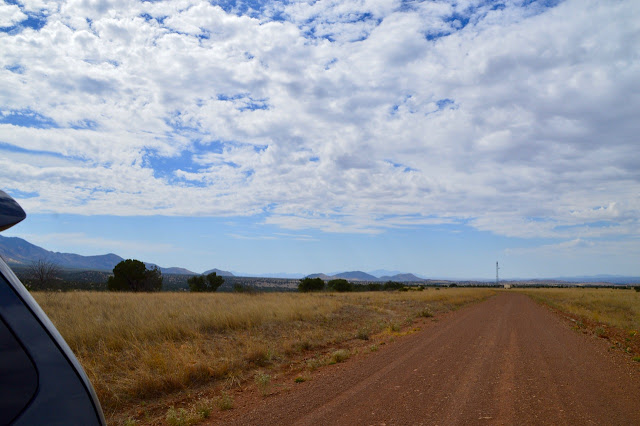 I pulled off to the side of the road to give them plenty of room to get by me. Speed limit was 25-30 mph through this flat land ... I'm guessing they were doing around 60mph. It would not be the last time I would see them though. 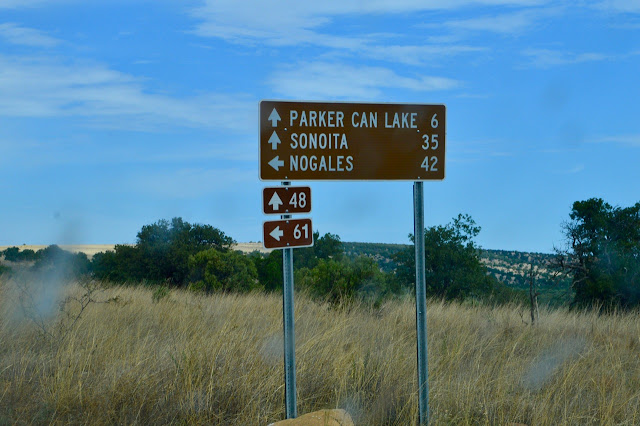 I still had some hills and tight turns to go down before the paved road showed up. The speed limit sign's had dropped to 10-15 mph, warnings to not use your breaks but to shift to a lower gear. That meant nothing to the idiot that passed me with a car load of kids and two dogs. It was really steep in some spots with hairpin switchbacks going down into Parker Canyon. They rode their brakes every step of the way ... never let off of them ... brake lights on bright red for miles and miles and miles. 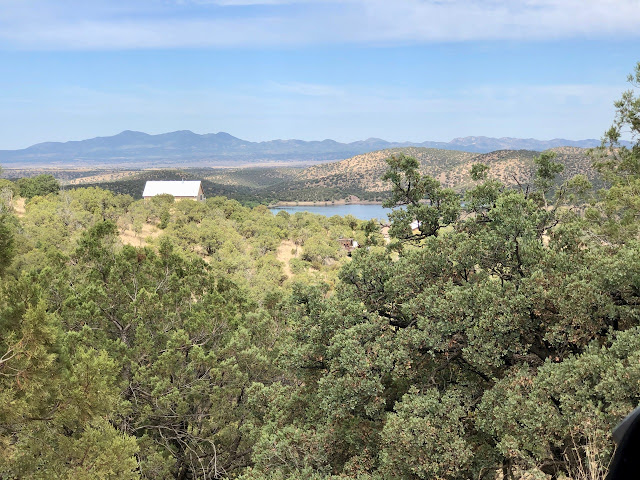 With my window rolled down all through this trip ... yes I even drive around town in the middle of the day with the windows down or when I go to Bisbee ... I like the heat. Anyway, with my windows rolled down I could smell the fresh burning smell of their hot brake pads. Luckily I didn't see anything bad happen to them or the car. 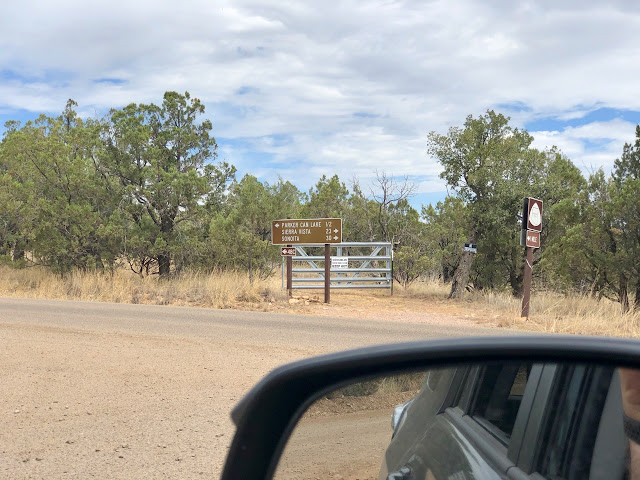 With no plans on the agenda to see Parker Canyon Lake I made the right turn instead and headed to Sonoita to pick up Hwy 82 back to Sierra Vista. I still had some miles to go to get home, the lake would have to wait for another day trip. 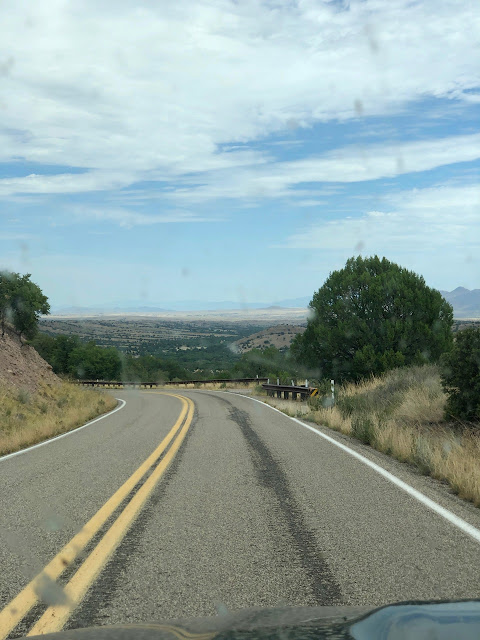 Hwy 82 is a nice highway to travel. Plenty of southwestern scenery and little traffic. I noticed as I drove back to Hwy 90 this drive kind of filled the urge I have at times to drive cross country. It wasn't like driving the two lane highways back in southern Indiana ... this felt more like I was out in the west, miles from nowhere as if I was driving cross-country. It was great. Yes ... the windows still down.

When I returned of course the hounds were excited to see me. Probably not so much that I was home but "there's that guy that feeds us food" as they were more than ready for the lunch ... that was past due.

As I drove through this countryside, seeing the mountains on the horizon, I knew I had chose the best part of the USA to move to. I love this type of country, the mountains within view and high heat most of the time during the summer. Don't worry, I did enough research on different potential places to live on Climate Data to know it will be nicer winter weather than what the hounds and I are use to. It will still get cold at night in the winters.

It's a cool 87° right now as I write this. I need to pick up some medical supplies as Barney suggested in his comments last night on yesterday's blog post. Then I have a couple of places today that I want to check out and will find out later if they are blog worthy in the next few days.

The hounds are in dreamland for the rest of the afternoon. I guess this post will have a little past and present tense. I'm not going to go back to correct things to make it sound like I've written this last part at the end of the day.  LOL