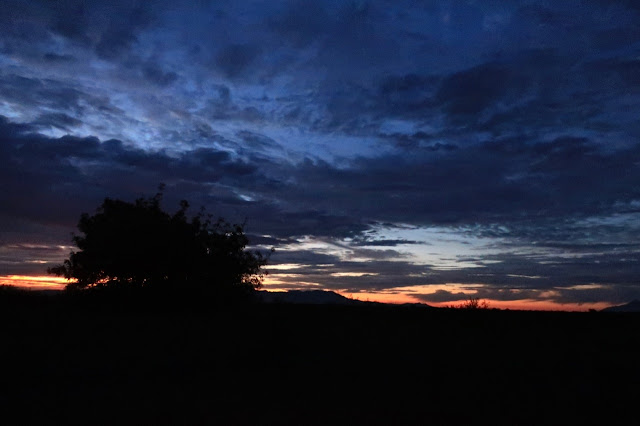 Normal routine this morning at "oh dark thirty" when I hear a bloodhound whining so slightly I can't believe it woke me up. The longer I lay there making a decision to get up or not, the whining gets a little louder each time because she has seen me move. If my wrist moves the Apple Watch will light up ... Stella then knows that her first food of the day is just minutes away. That is all she wants, food. 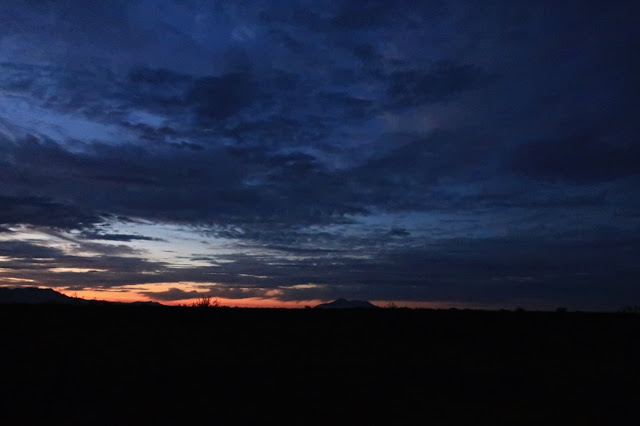 I was happy she woke me up this morning because I was able to see soon after letting the hounds outside this amazing sunrise. I went back in the house to grab the Canon G97 and hoped to capture what my eyes were seeing. To wake up and see things like this happening every morning is pretty amazing and a great way to start the day. 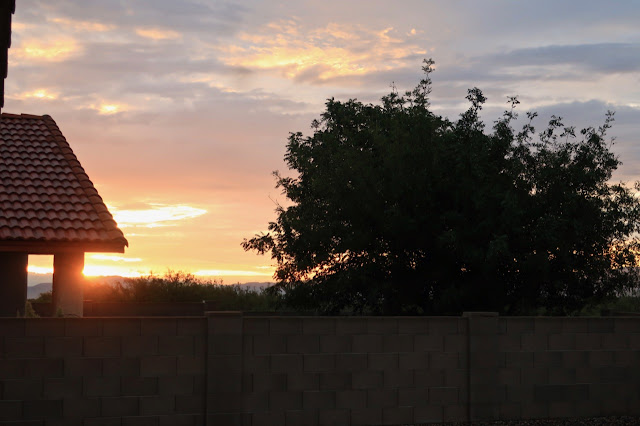 If I lean forward or look around the corner of my patio wall ... I see the sun rising in the east. I wish that tree was not there. 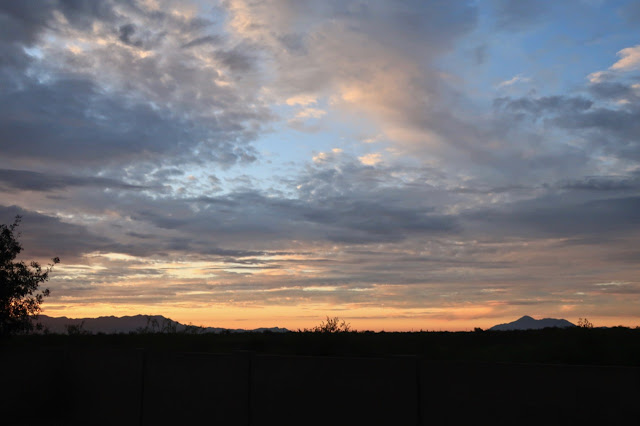 I decided this morning since there would not be a school bus pulling into the neighborhood by 6:15am, that I'd have a cup of coffee this morning before Stella and I would take off for our daily walk just after sunrise. Remember those times where Sadie use to whine if we were not walking by what time ??? 8:00am ??? I don't think there is anyway I can sleep that late living here. 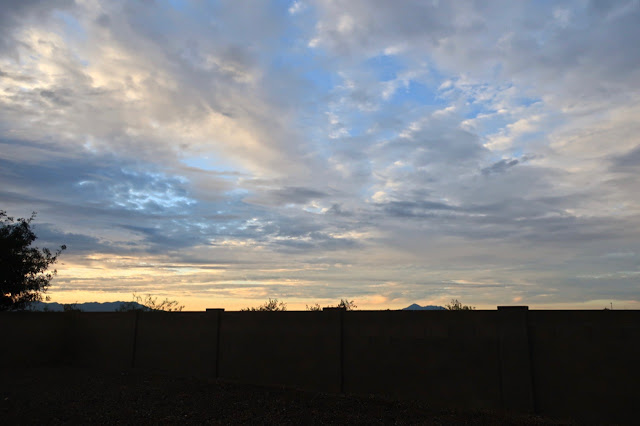 As the fog started to clear from the brain cells as the caffeine of SE Arizona's Arbuckle's coffee hitting all circuits, I could see my plan of the day taking form. I've been searching for just the right coffee lately as I have tired of Starbuck's and Seattle's Best Coffee. So I have a few different blends/companies to choose from in the cabinet. I'll not throw any of it out in the trash but I have checked off a few from my next coffee shopping list. It is almost easier anymore to order stuff from Amazon than making a trip to the store. 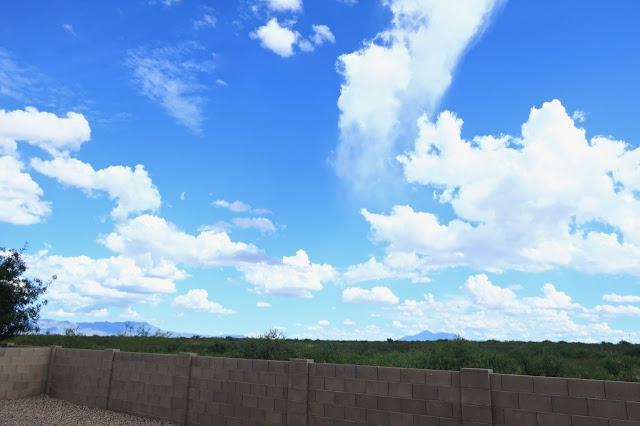 By late this afternoon the temps had warmed up and climbed out of the 70's. The hounds and I had a pretty uneventful day but at least I was able to buy groceries this morning and had them unloaded and put away by 7:30am. The only bad thing was, I needed a couple of non-food things from Walmart that Fry's Market would not have ... so I thought I'd make one trip for that and for groceries.

I have a cart full of groceries, 30 million cashier lanes available, and the only lights turned on to let me know which lanes were open ... were the "self checking" lanes. I could feel my pulse rate increase just a little but it almost went off the charts as I moved through my stack of groceries ... scanning and bagging them. I guess all young cashier "monitors" see white or gray hair and instantly think we are all computer illiterates. When I heard the question "Are we doing okay" ... I tried my best to keep my mouth shut ... but you know me. 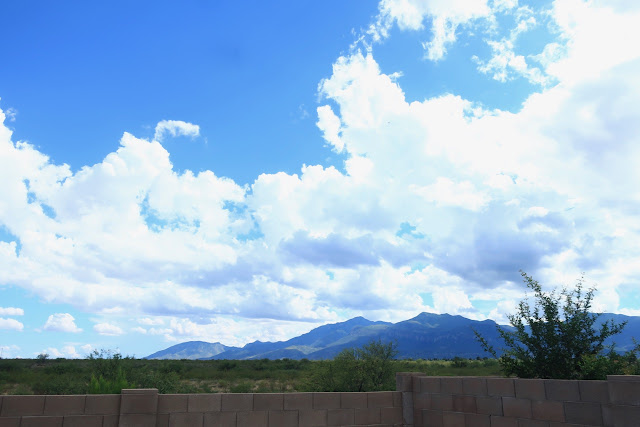 With 30 million cashier lanes available and all closed what else was I suppose to do?

I blurted out "you know if I wanted to be a (*##$^@&*@ cashier I would get a (*##$^@&*@ job !!!!" I guess she figured out I WAS doing okay checking out my groceries because she walked away. So the next time I will go BACK to Fry's Market and buy groceries in the early morning hours and then have the fastest checkout cashiers in the world (from my experience) scan and bag my groceries. I'll not have to do anything but load the moving counter and slide my debit card in the reader to pay. Plus they give you a discount on gas for the car based on how much I spend.  :) 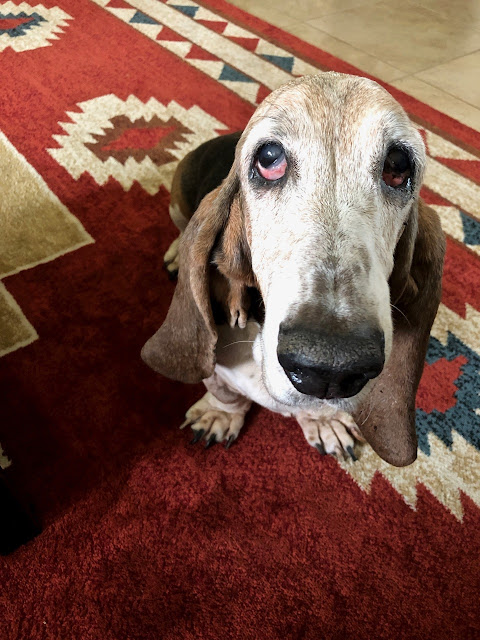 The efforts to change policy about the new couch are still going strong. Heidi and Stella will not give up their vigilant efforts to get me to change my mind and let them on the couch or small loveseat. I did not measure the old leather couch before I moved so I am not sure but by the looks of the new couch as I sit in the middle ... it does not look as long as the old leather couch I use to share with the hounds since 2003. There is enough room for them ... barely. 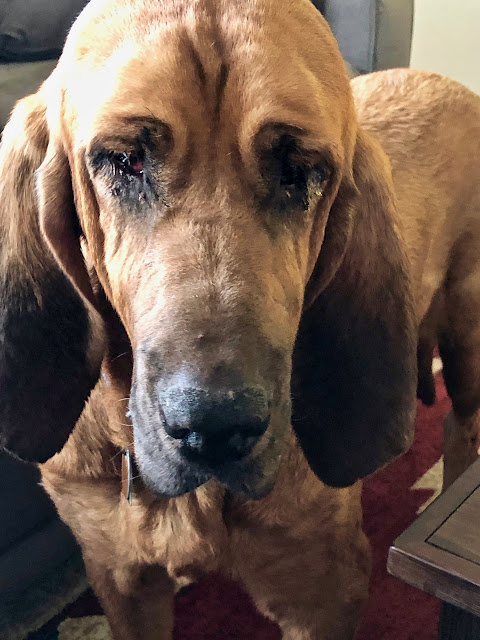 When Stella begs for anything ranging from wanting my food, more of her food, cookies, candy, pizza crust, dog treats, ice cream, steak, chicken, .... ah ... you get the picture ... she almost closes her eyes and looks downward with a feeling of rejection. Still ... the policy is not going to change on this. I am looking at some options since friends I text hound photos to are making a lot of suggestions ... they think I am cruel. All ladies from our college years and all have dogs ... small dogs ... like 4 lb dogs. HUGE difference between a 4 lb dog living on a couch and a 85 lb dog living on the couch with a 45 lb roommate. 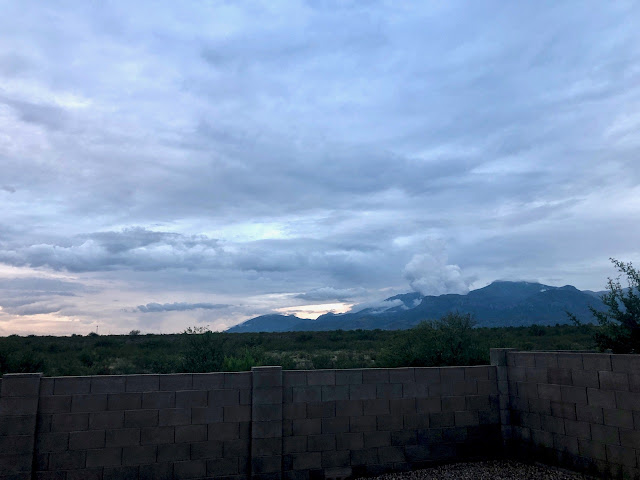 While I have been watching Reds baseball games usually between 4:10pm - 7:??pm almost every day ... I like to step out on the patio between innings and check out that crazy sky again. Sometimes I take more photos and depending on what is going in the game (Reds losing), I will pull up that ugly chair and sit outside and enjoy the sundown and the mountain views. 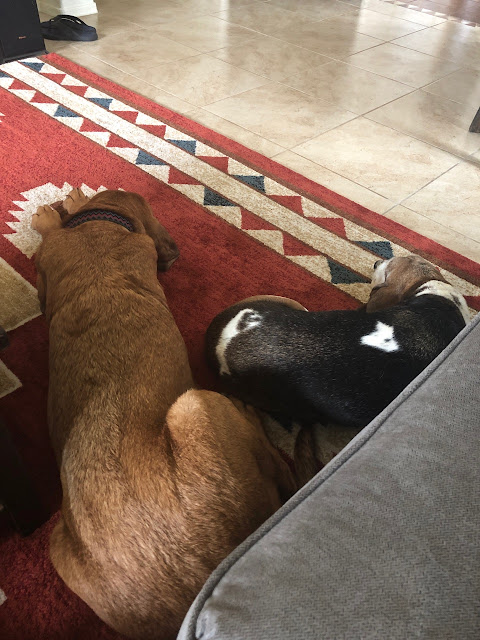 After their failed attempt last night to get me to change my mind, I walked back inside from one of those patio trips between innings and they had decided 71° with blowing wind coming through the open windows in the house was too cold for them. It was the first time I've seen them sleep side by side out here. You will notice the iPhone camera took a much more accurate picture of the rug compared to the bright colors the Canon G9X took the other day. 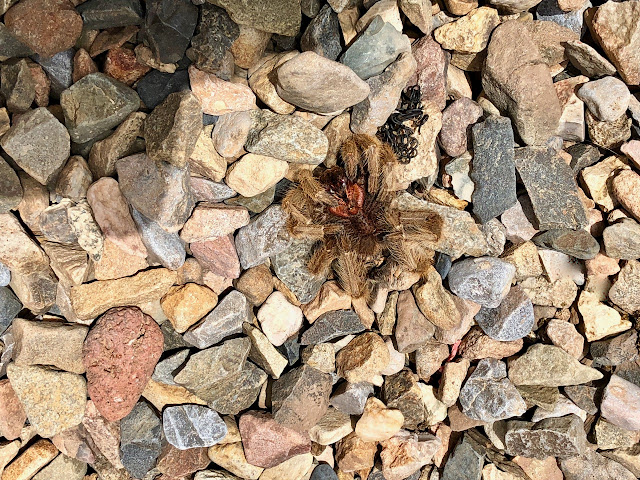 With a big mystery. I saw it off to the right of the patio if I am looking out toward the fence. It's the area that Heidi usually pees in so I was happy I had checked the yard like I always do before letting the hounds out. I saw two strange things though when I keep staring at it from the patio. It wasn't moving and what was that strange black thing next to it ???? 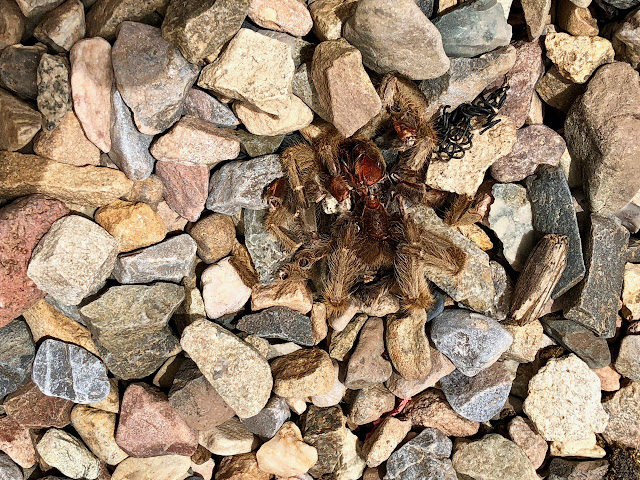 I slowly tiptoe'd toward it ... it didn't respond. I dropped a few of those small rocks on top of it and it broke apart as if were nothing but dust !!! Then I started looking at that small black stuff. It was something I had never seen in my house, my trash, or the yard. I have no idea where it came from. It looked like a black rubber chain of some sort.

Any ideas what would kill a tarantula ??  Where did that small black plastic/rubber chain come from? 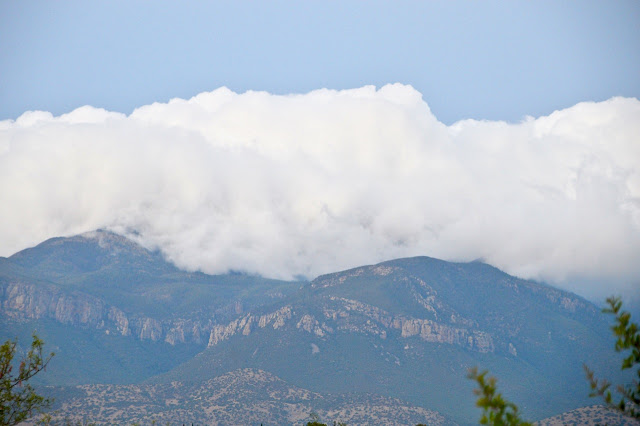 Since I am basically obsessed with the sky that I can look at from the patio or the kitchen windows and the bedroom window, I thought I'd show you some of the different changes I witness from day to day. Some of these were taken before I returned to blogging. I am not sure if Blogger loaded them into any specific order. I really find it interesting to see all the different changes. I am positive these same type of changes occurred back in 'the tropics' but for some reason they were just not as dominant.

There is nothing like a wide open western sky. 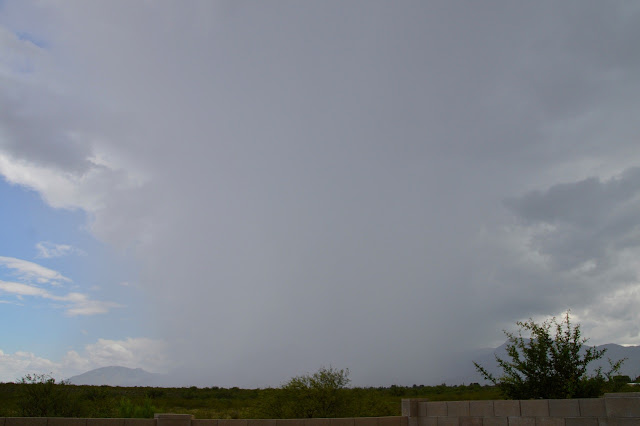 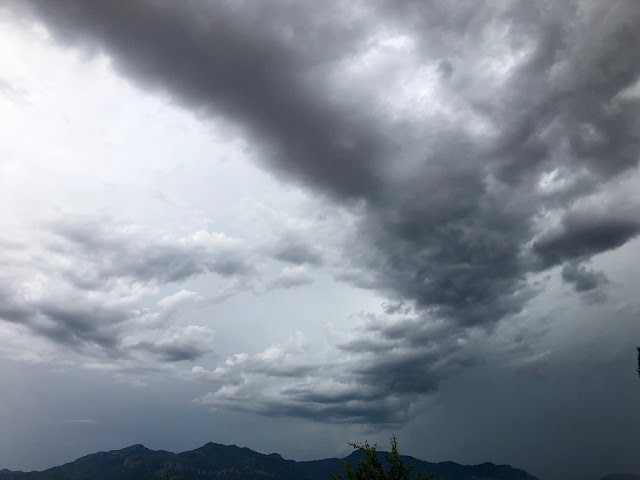 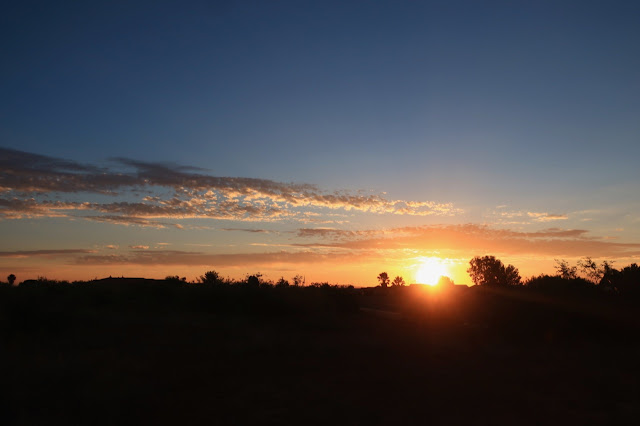 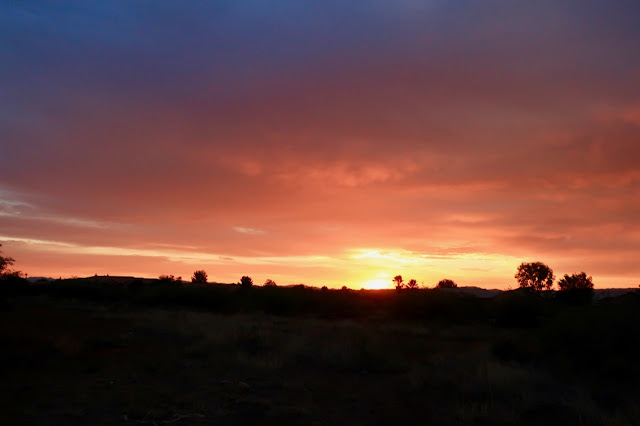 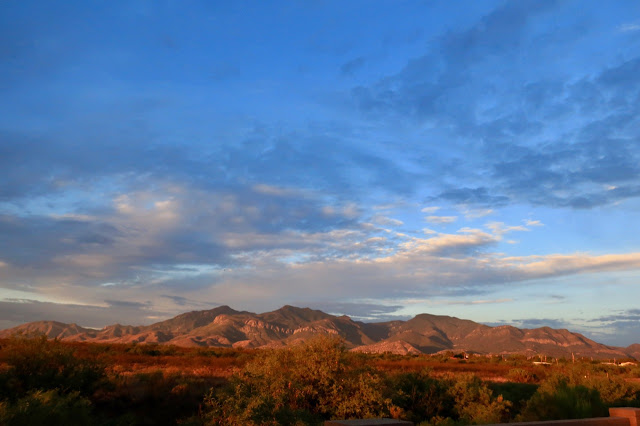 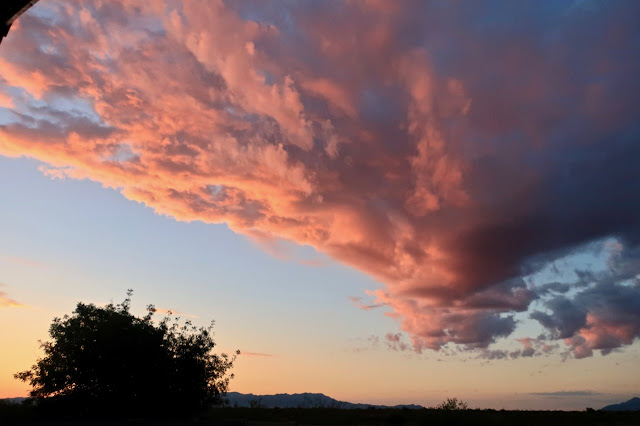 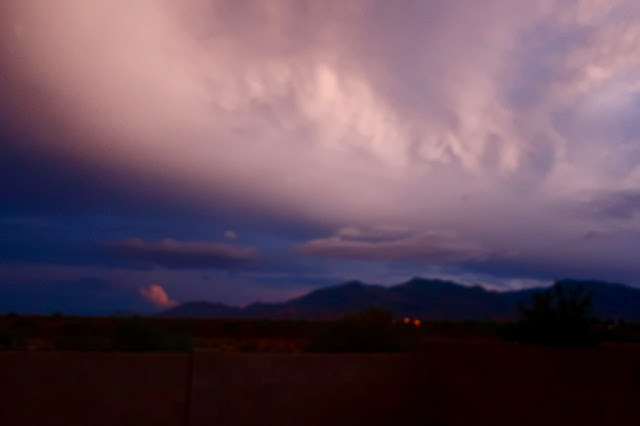 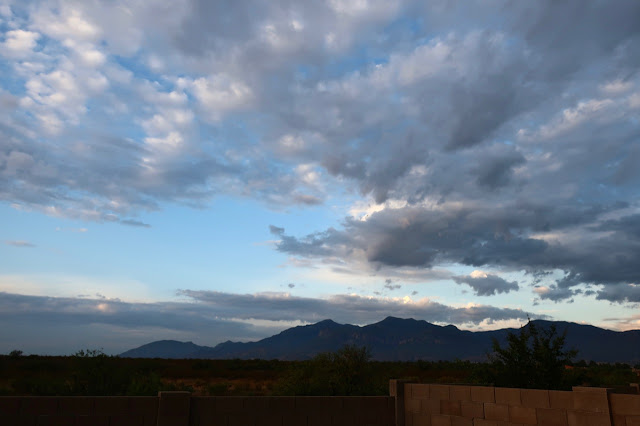 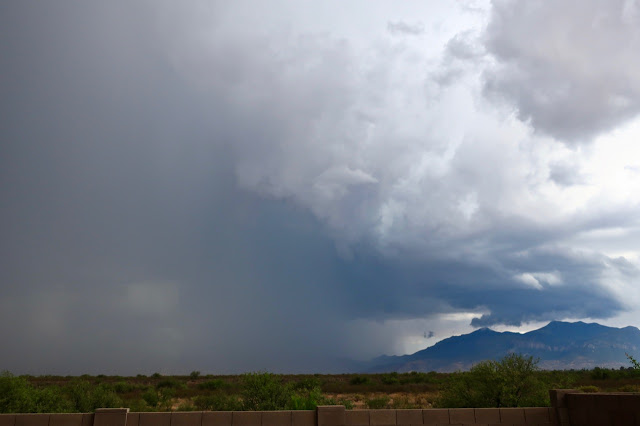 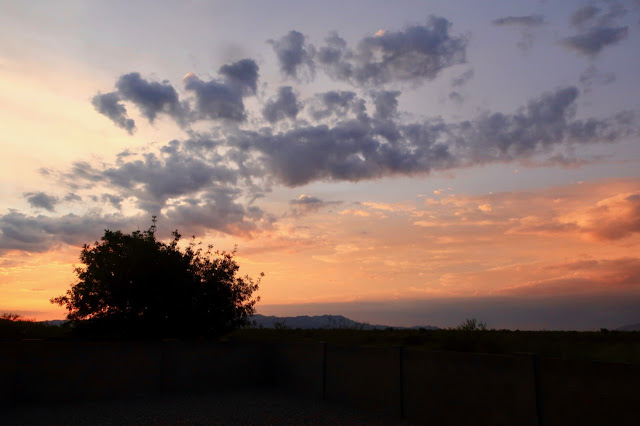 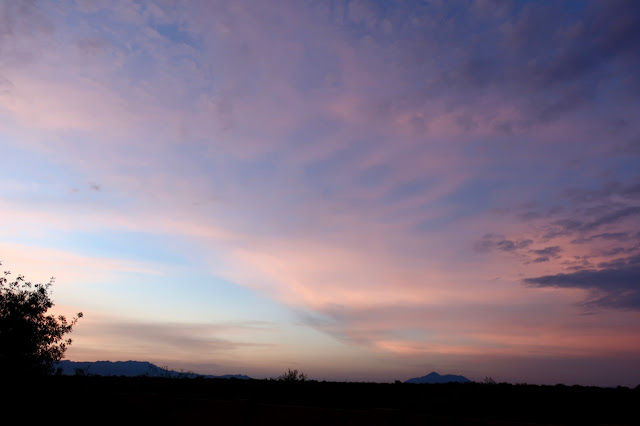 With the weather forecast showing the rain has passed through, I have almost a week of sunny weather ahead this week. There will be a very good chance I'll be doing some local road trips this week after I return from my morning bike rides. I have a few trails I would like to hike also. It will be my first attempt at hiking in this area. I'll be sure take plenty of water with me if nothing else.

As I put this post together the hounds are in their normal blog writing positions ... Heidi sleeping in the corner of the room and Stella is sleeping pressed up behind my chair so I cannot slide it away from the desk. I can't move 85 lbs of dead weight, even one that snores a little.