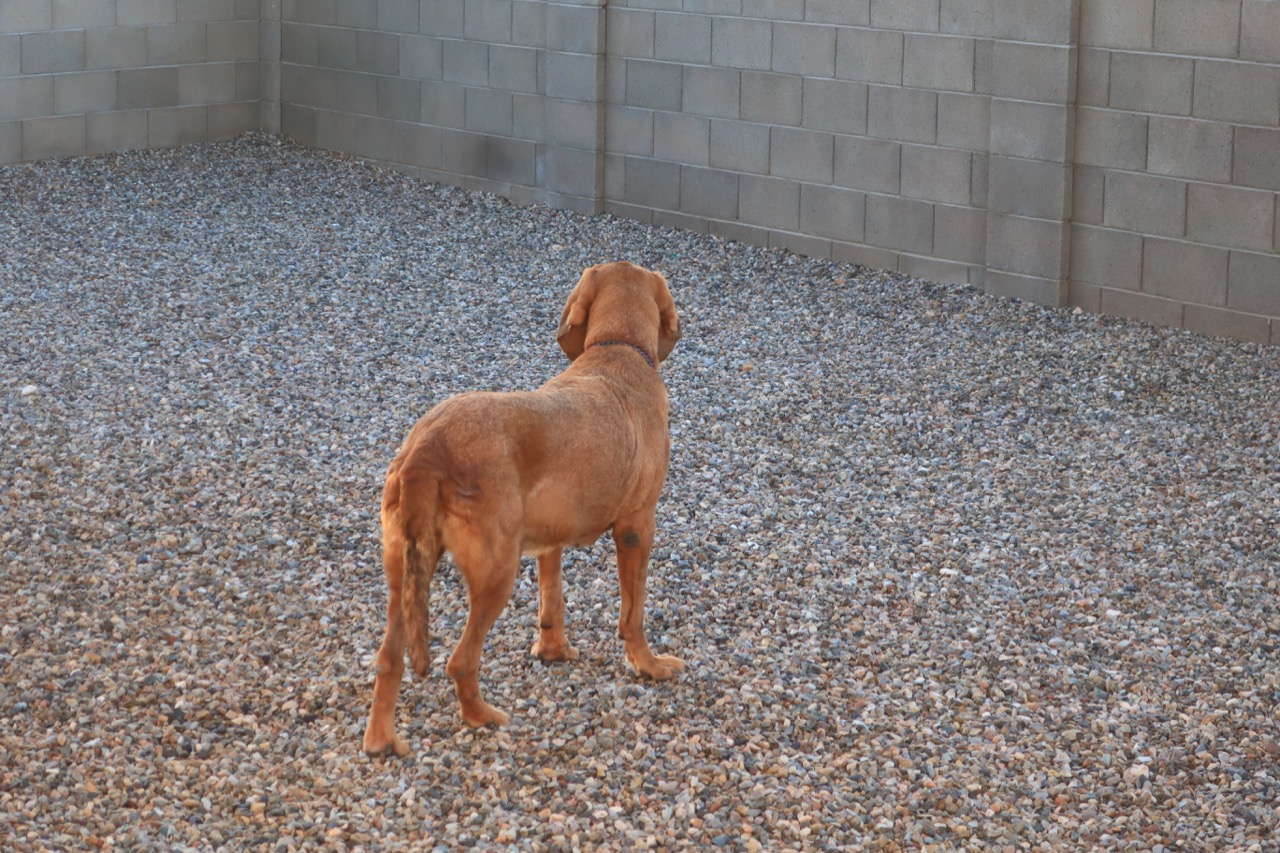 Stella and I could tell today was going to be much different than yesterday. She was ready to take her walk before I could even change into some clothes. Of coarse she and Heidi had to have their breakfast and they did ... at 4am !!!!  So this photo was around 5:30am and Stella was raring to go. 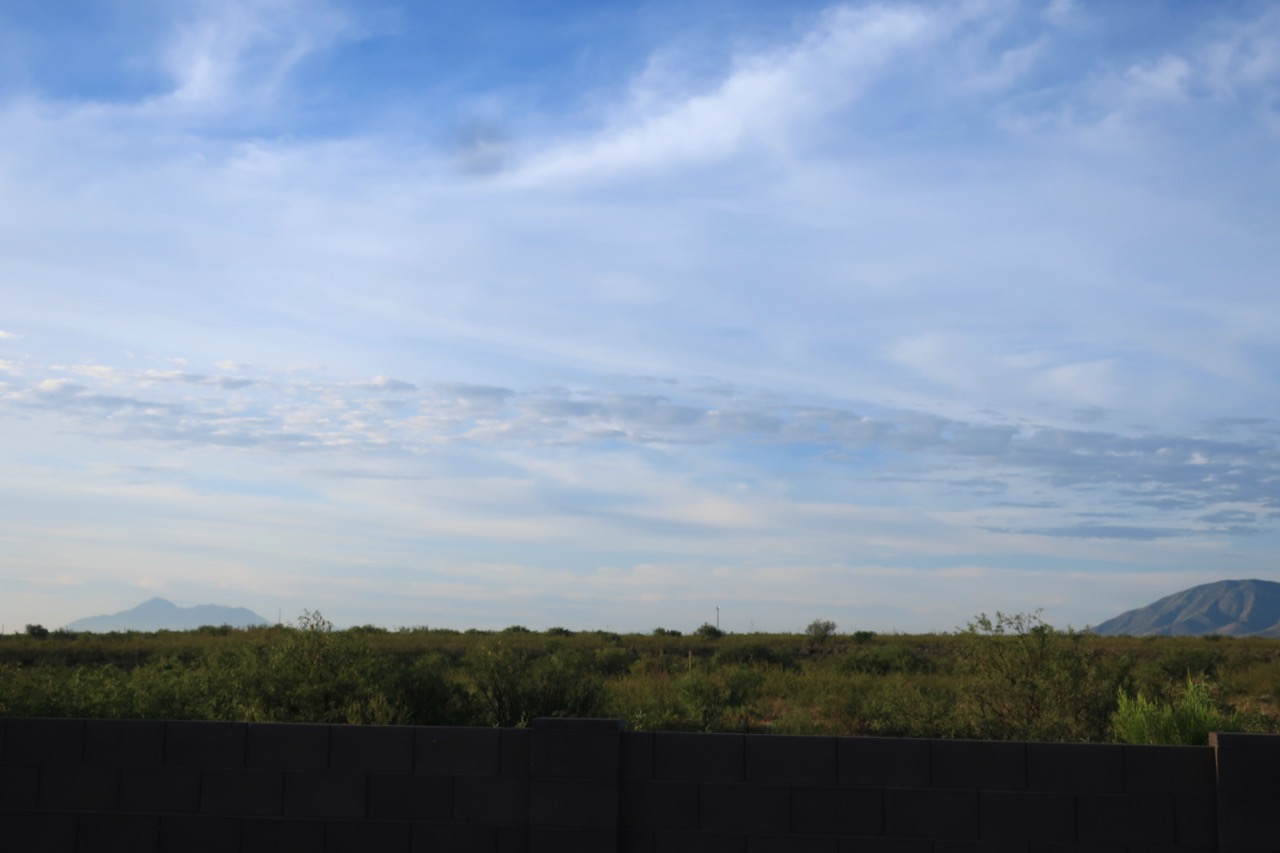 I could tell while walking Stella AND HEIDI !!!! that I was wanting to ride my mountain bike today and I wanted to ride a lot of miles for a long time. I wanted to climb some hills, ride some trails and check out some new roads I had not been down. I got more than that and may really pay for my riding today sometime Saturday morning.

Yes, you see Heidi's name in the sentence above. Only this time she figured out she could walk on the pavement and the dirt and not have to trot away from anyone ... that no one was chasing her. So she walked the pace she used to in the field back in 'the tropics', sniffing as many different scents as she could in that .66 of a mile walk. It was a cool 68° and that might have been a factor in her decision. 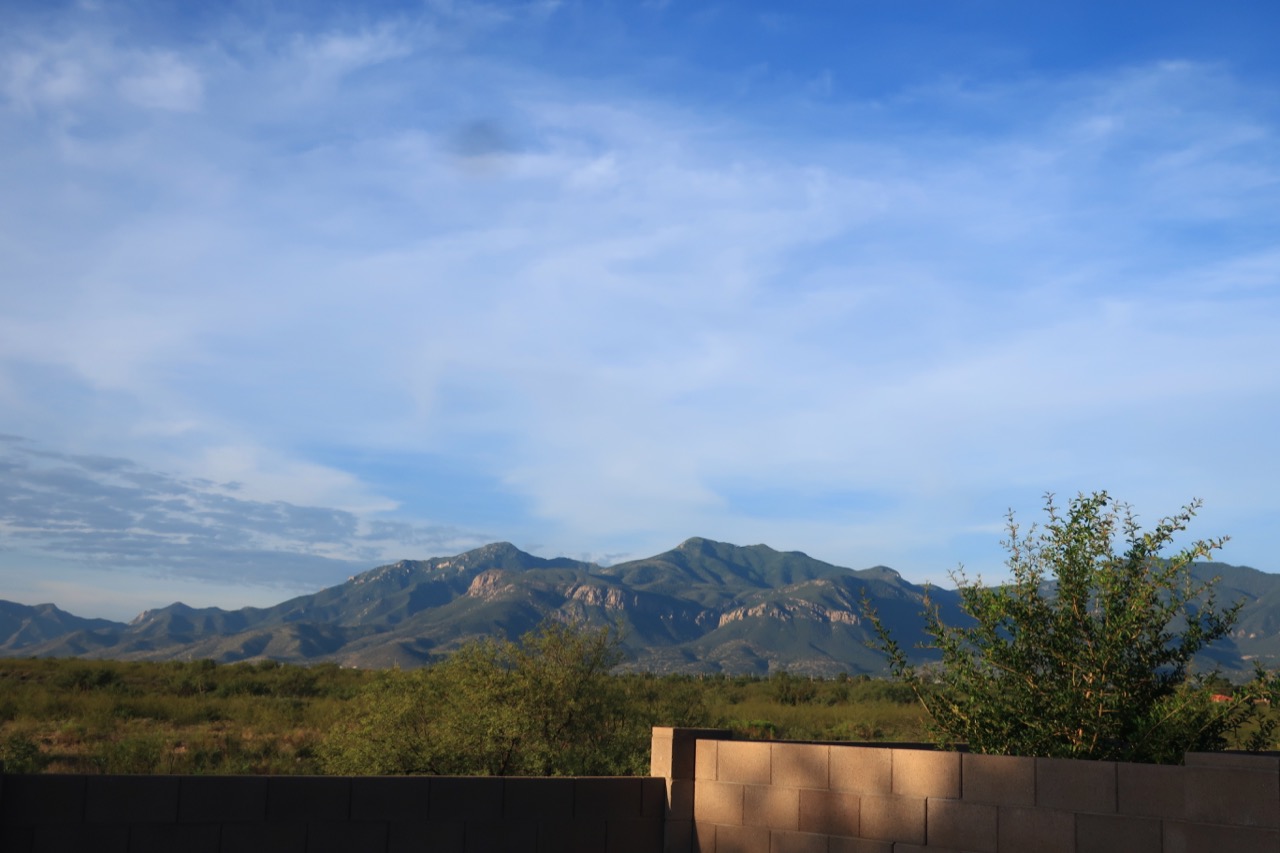 When we got back I didn't waste a lot of time changing into some bike shorts (padded seat area) and a bike jersey (keeps you cooler flicking off sweat). I had intended to do a lot of climbing on the "crossroads" where I ride on my road bike. My definition of "crossroads" are the streets that cross Cherokee Rd on the way to Ramsey Canyon Rd. All of them have long slight inclines. I also wanted to take a right turn onto a dirt lane I see people walking their dogs sometimes. .... that was all loose sand, a lot of rocks and a two track for a truck to someone's house. I turned around before getting to their gate.

I ended up riding out to the Brown Canyon house again but only this time I rode their "Natural Loop Trail". At the end of the trail is where I took my first fall. A large rock hiding in the tall grass on the edge of the path knocked the bike out from under me. I wasn't hurt and was able to ride back home.

I also checked out that area that I talked about yesterday and the satellite map was right ... what I thought was a trailhead was blocked by a locked private gate and a stone wall going each direction along the property line. I ended up riding the compressed gravel road to the left  to check out the property that had For Sale signs on it. I rode almost 29 miles for over 2 hours 30 minutes.

When I pulled into the driveway ... a beautiful long snake was laying stretched out by my garage door in the shade. As I backed the bike away, the snake turned around and crawled away quickly ... so quick that I could not find him. 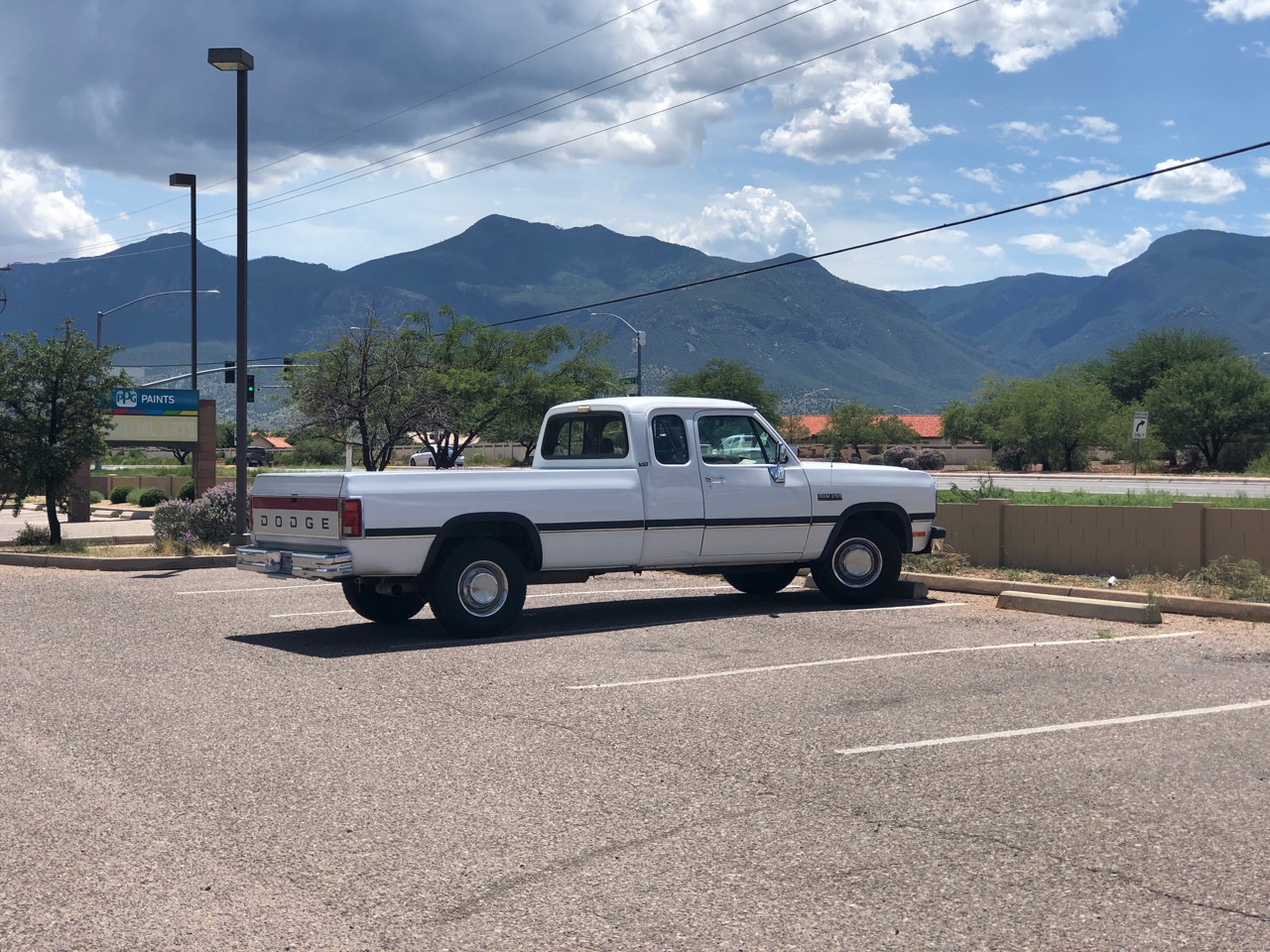 With a ride like that I knew the only place I could replenish all of the burnt up carbohydrates and calories was Papa's 50's Diner. I was going to try something different on their menu this time. The air conditioning felt great as I walked in from 96°.

A nice size salad, meatloaf, mash potatoes, brown gravy was fantastic. But I needed some desert. 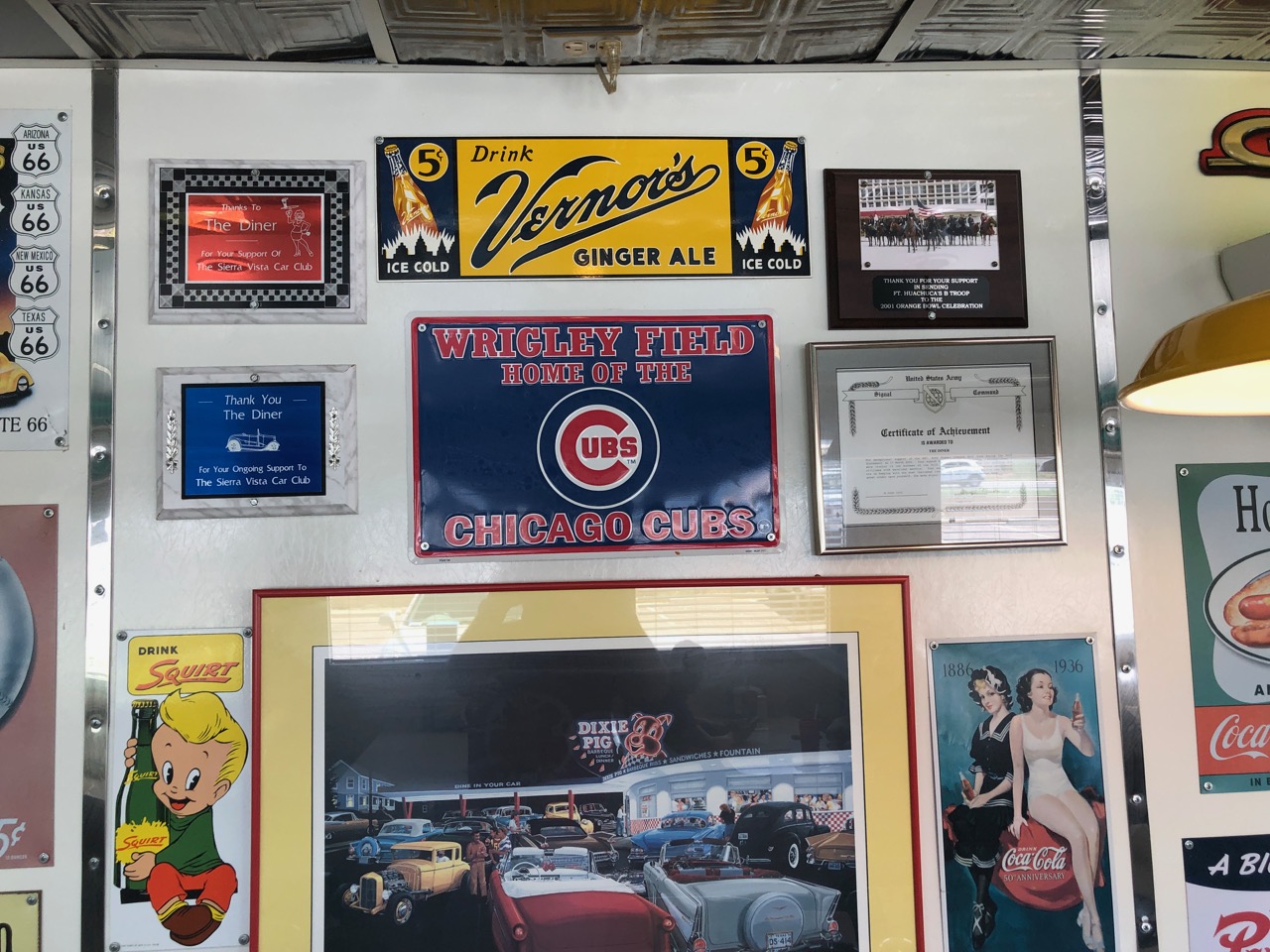 Texting my friend in Chicago last night during each of our different baseball games. She was in shock after they blew a 5 run lead in the last two innings of the game, losing by a Grand Slam HR. I wanted t show her that Papa's Diner supported her Cubs all the way out here in SE Arizona. 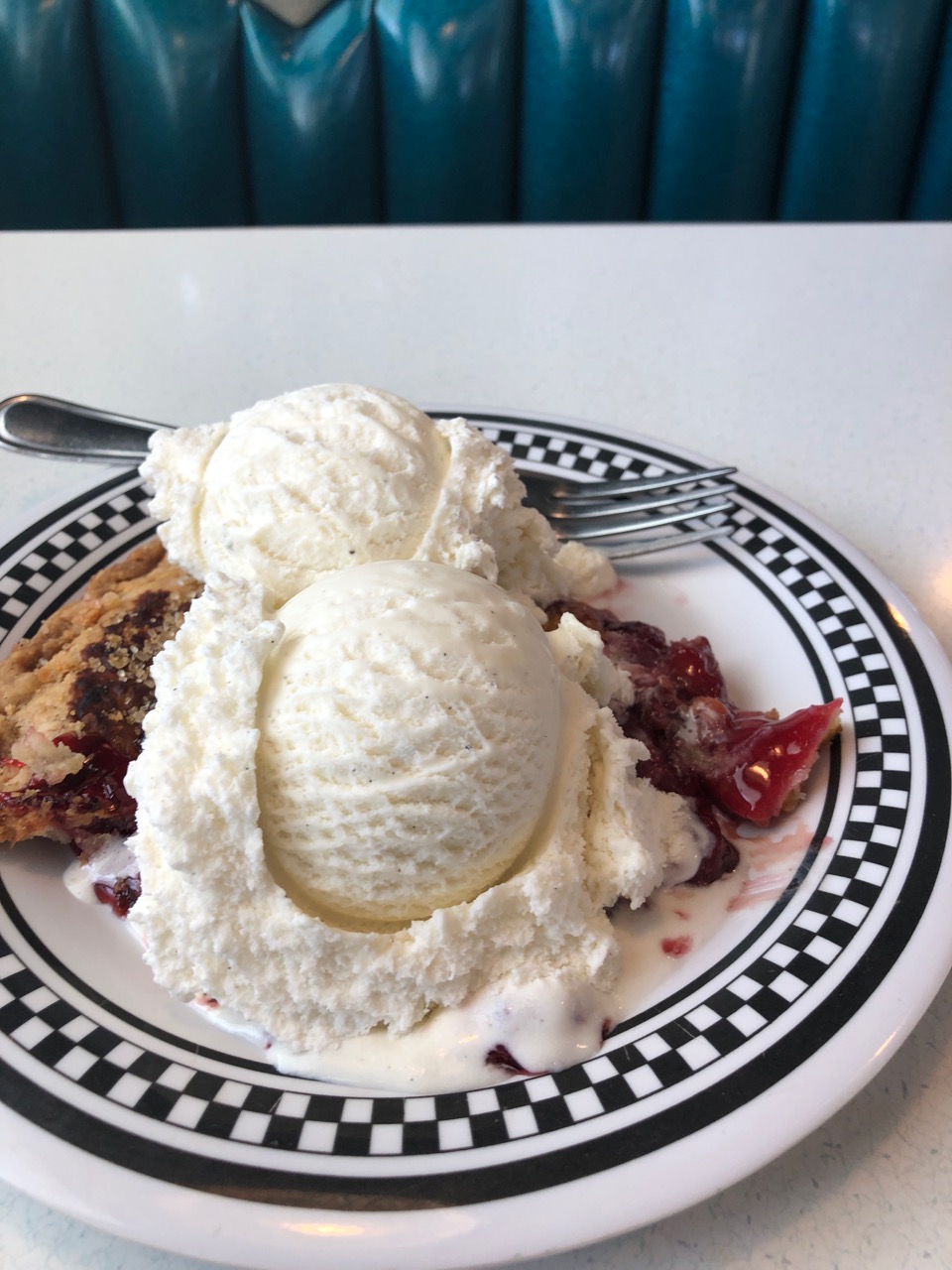 The desert was hot cherry pie ala' mode ... I didn't expect two scoops of ice cream. I told the waitress it tasted so good that I was tempted to lift the plate to my lips and lick the plate clean.  LOL Stella would have had a string of drool a foot long if she had seen that pie and ice cream. 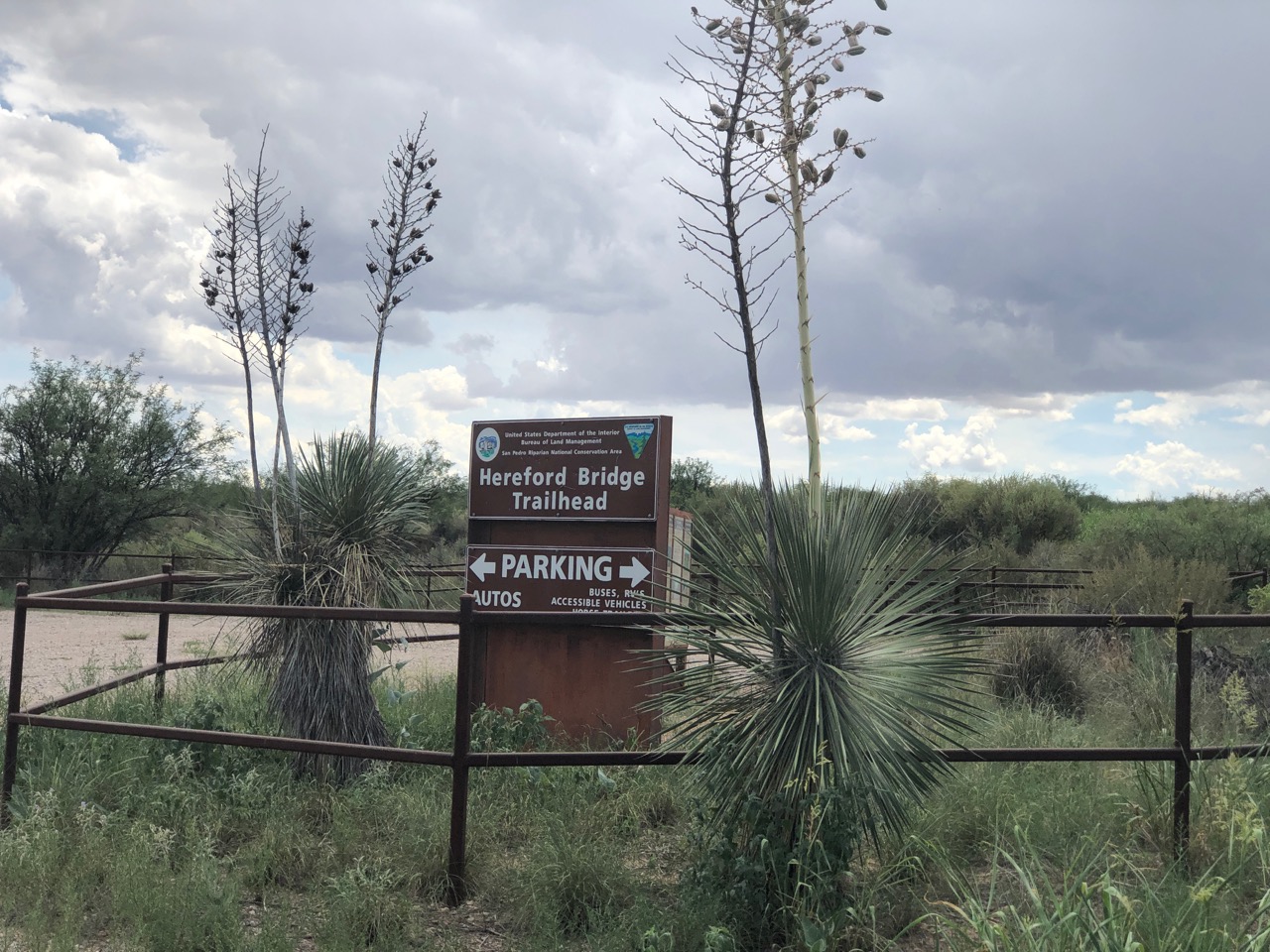 My plan was drive through and look at Hereford, AZ. The town and area was evacuated in June 2011 when that forest fire, started by accident of course, ripped down the side of the mountains and across the dry fields of brush. My neighbor told me that large embers were blowing onto our rooftops. So I am driving out Hereford Rd., thinking I knew where I was going.

At first I turned left on Ramsey Canyon Rd because I wanted to see the condition of the road and how many miles it was to the base of the mountain or what I found out ... where the pavement road ended and turned to dirt. It was 5.9 miles from Hwy 92. When I turned around and took a left turn on Moson Rd heading south toward Hereford that was my error. I was checking out that road as a potential new place to ride my bike.

I did not realized when Moson Rd and Hereford Rd intersected that I was east of the town. It turned out great though because I ran into, by accident ... the Hereford Bridge Trailhead. I drove through Hereford on Hereford road after driving on the Hereford one lane bridge ... I did not see anything that suggested a town was there. 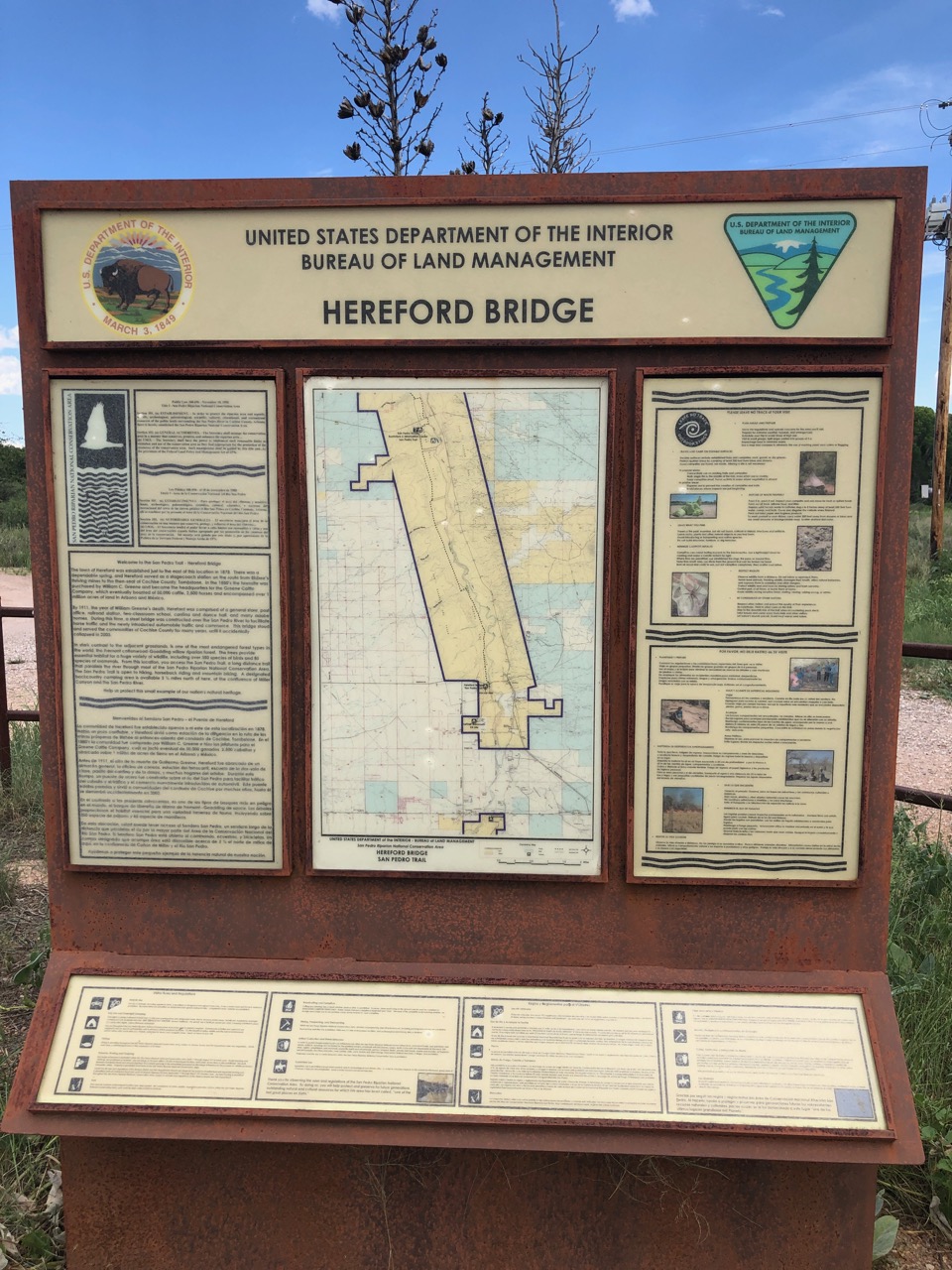 I had the whole area to myself, I had my cap that I had bought the other day and enough carbs stored up from that pie and ice cream I could have walked all the way back to the San Pedro House. It turned out to be a very short walk to the bridge. The whole hike if you want to call it that ... was no longer than Stella's walk in the morning. 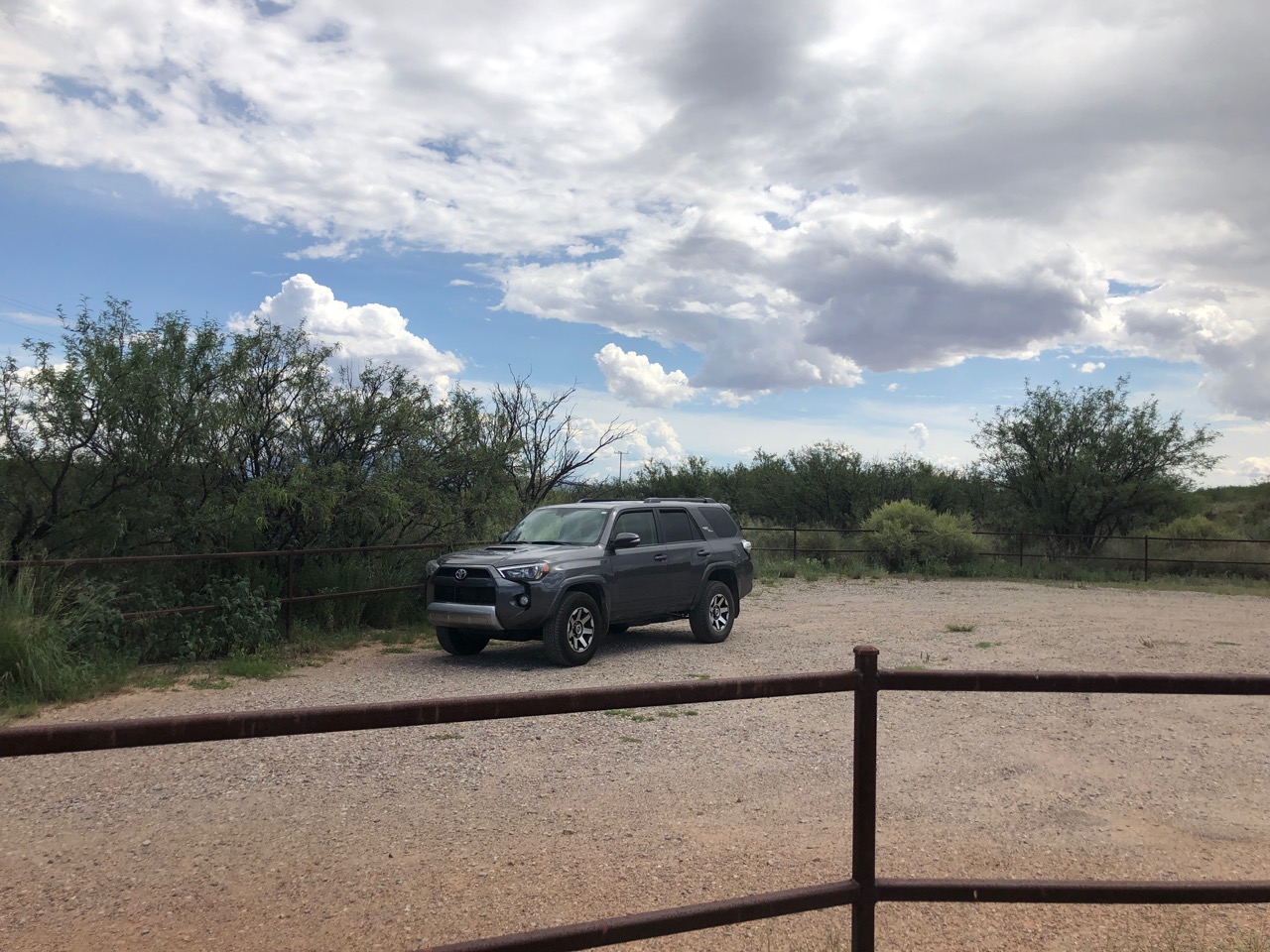 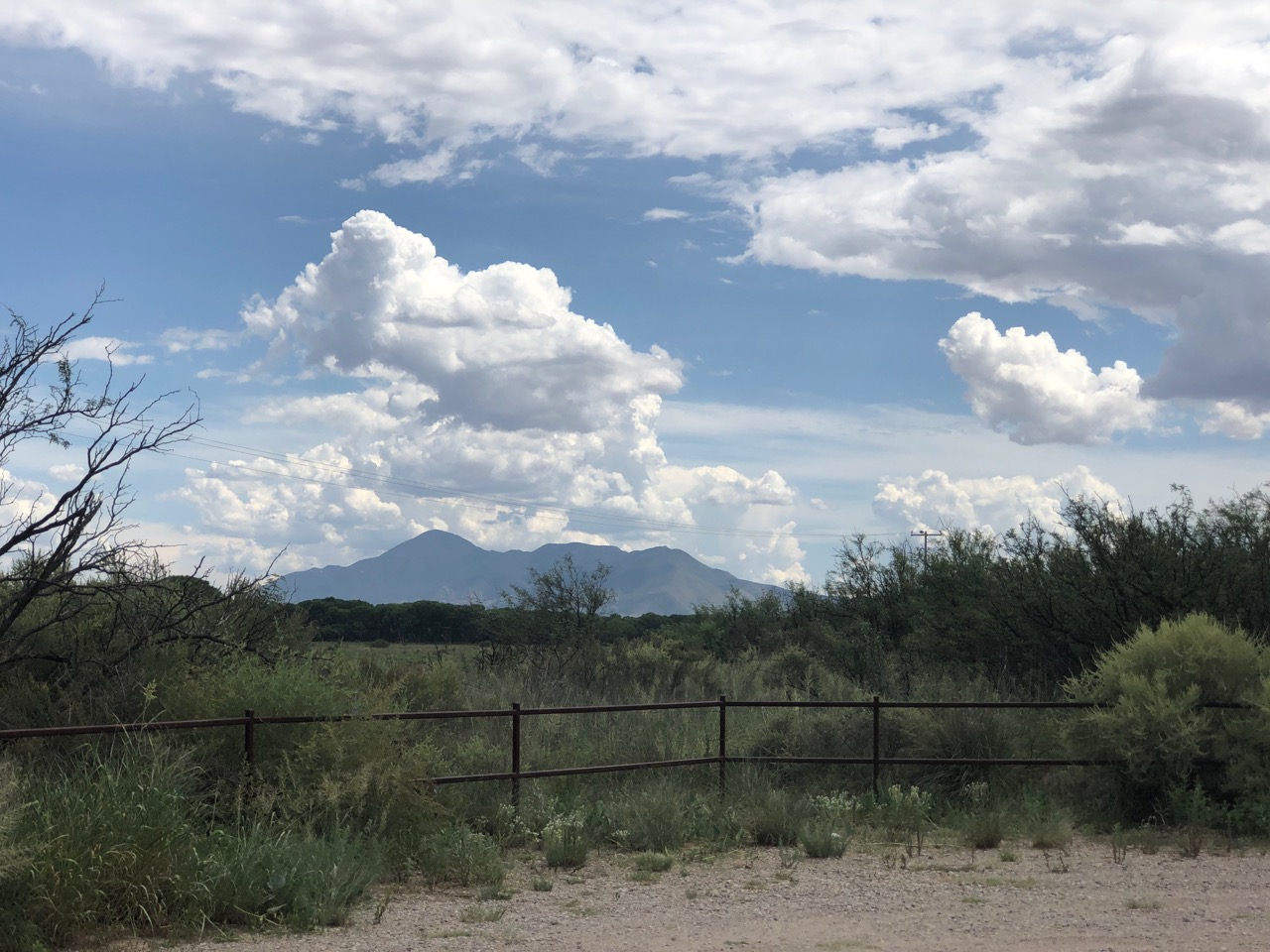 With landscape like this it is still hard to believe this is the state of Arizona. 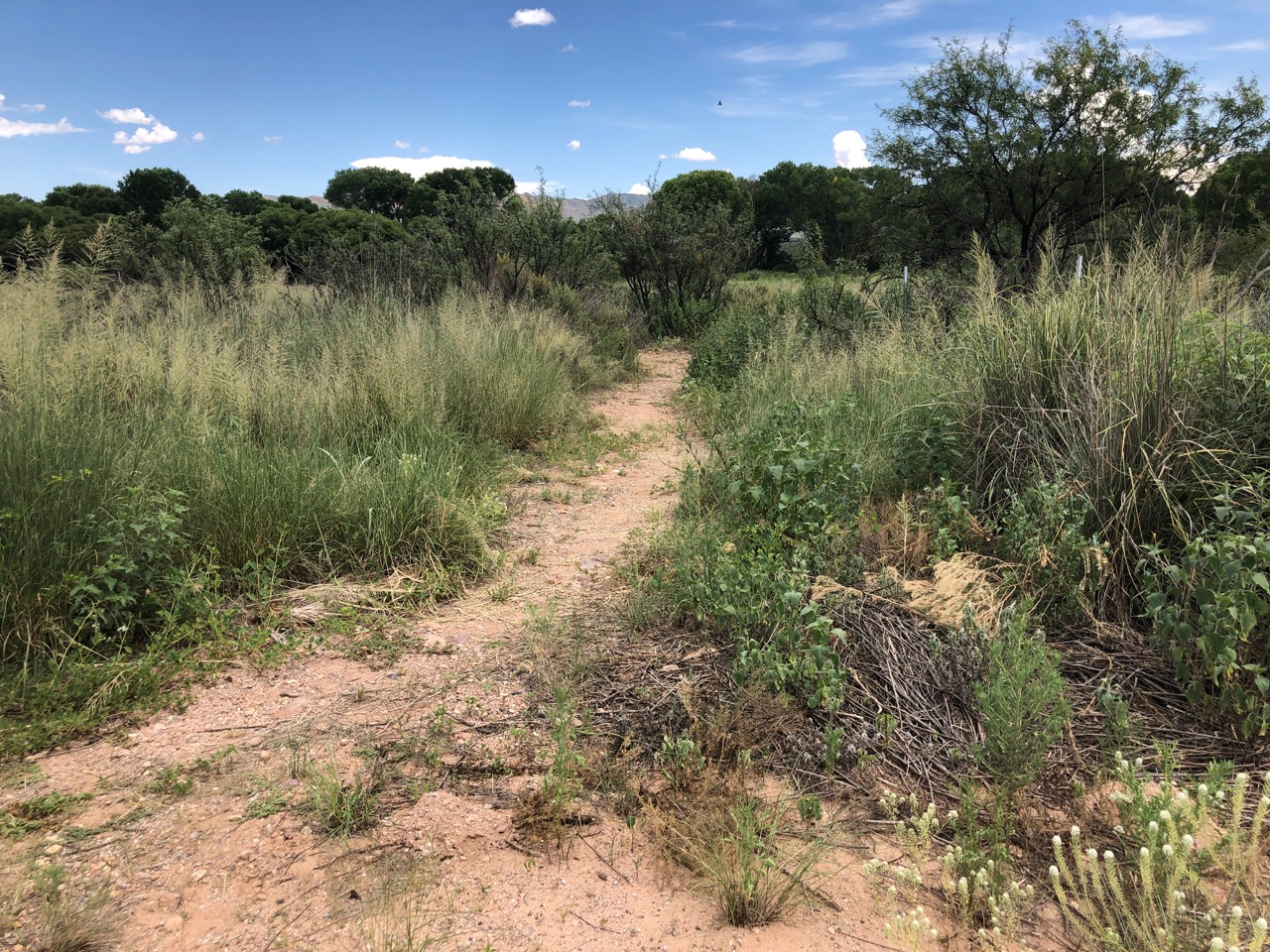 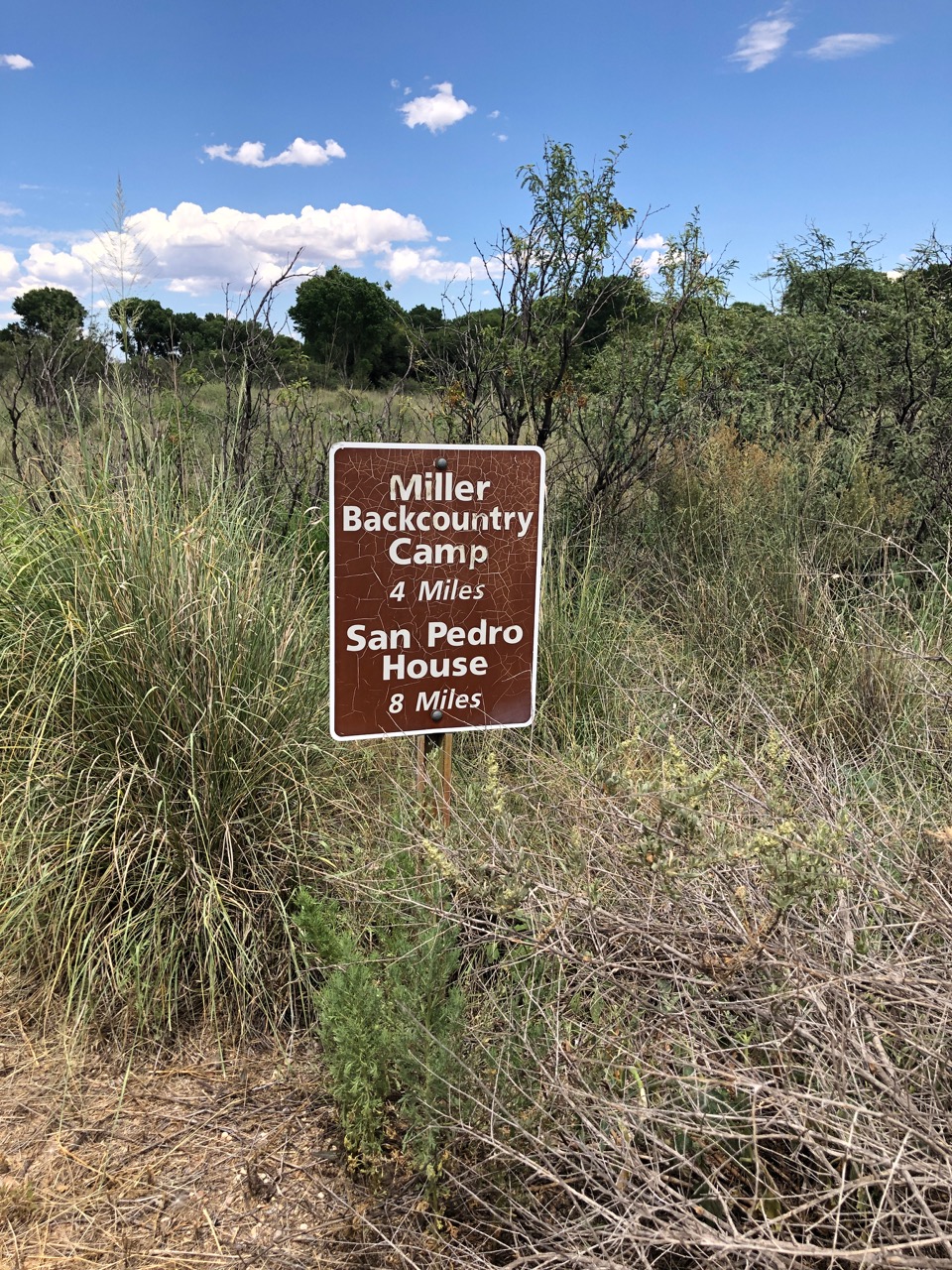 Although my iPhone was telling me it was 96° at 1:49pm, it didn't feel that bad. The nice thing is that I am not attacked by bugs or gnats or mosquitoes like I would have been on an August afternoon walk through the field with the hounds. When I stood still and just listened ... only the sounds of different birds were all I heard. 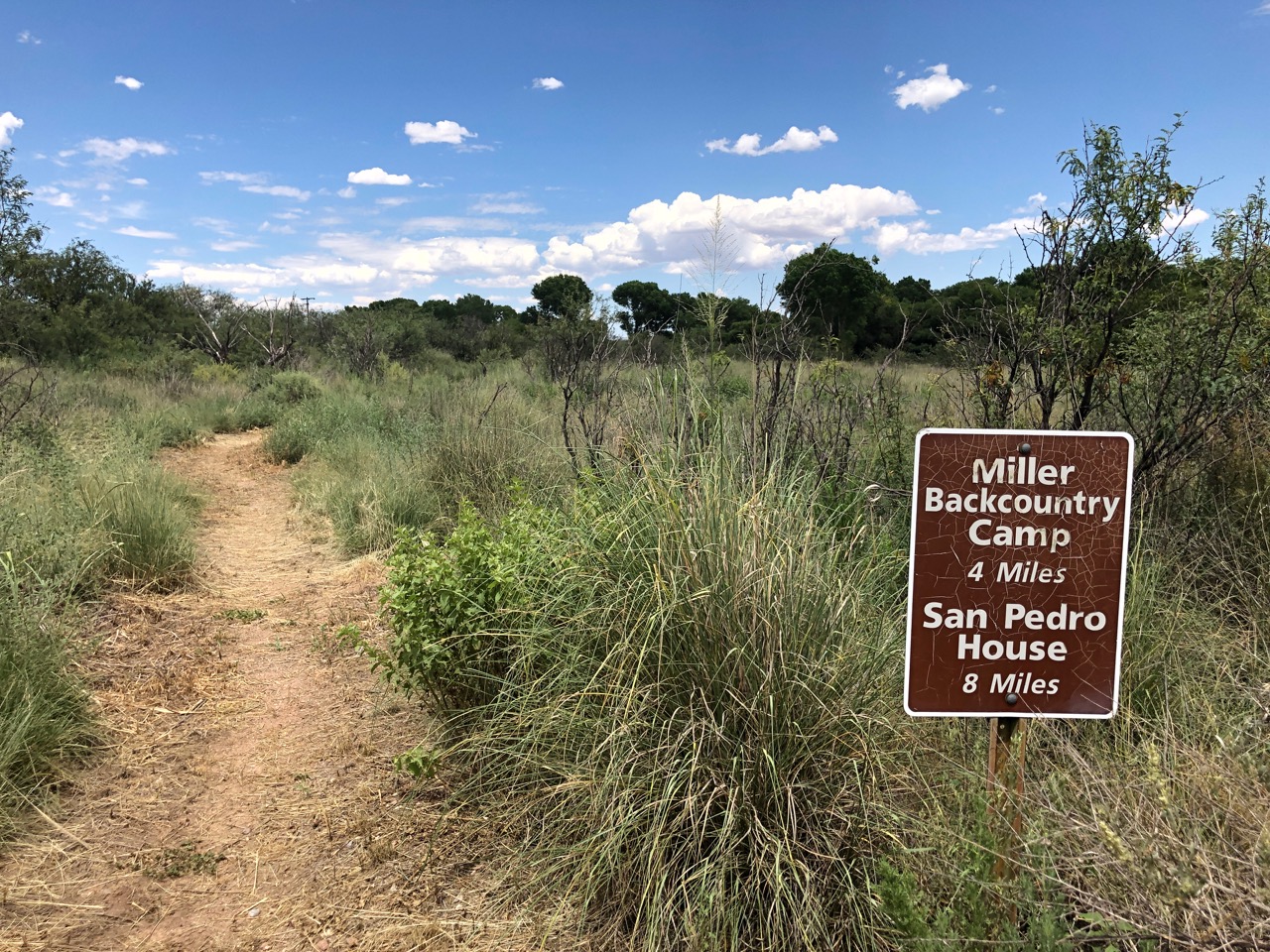 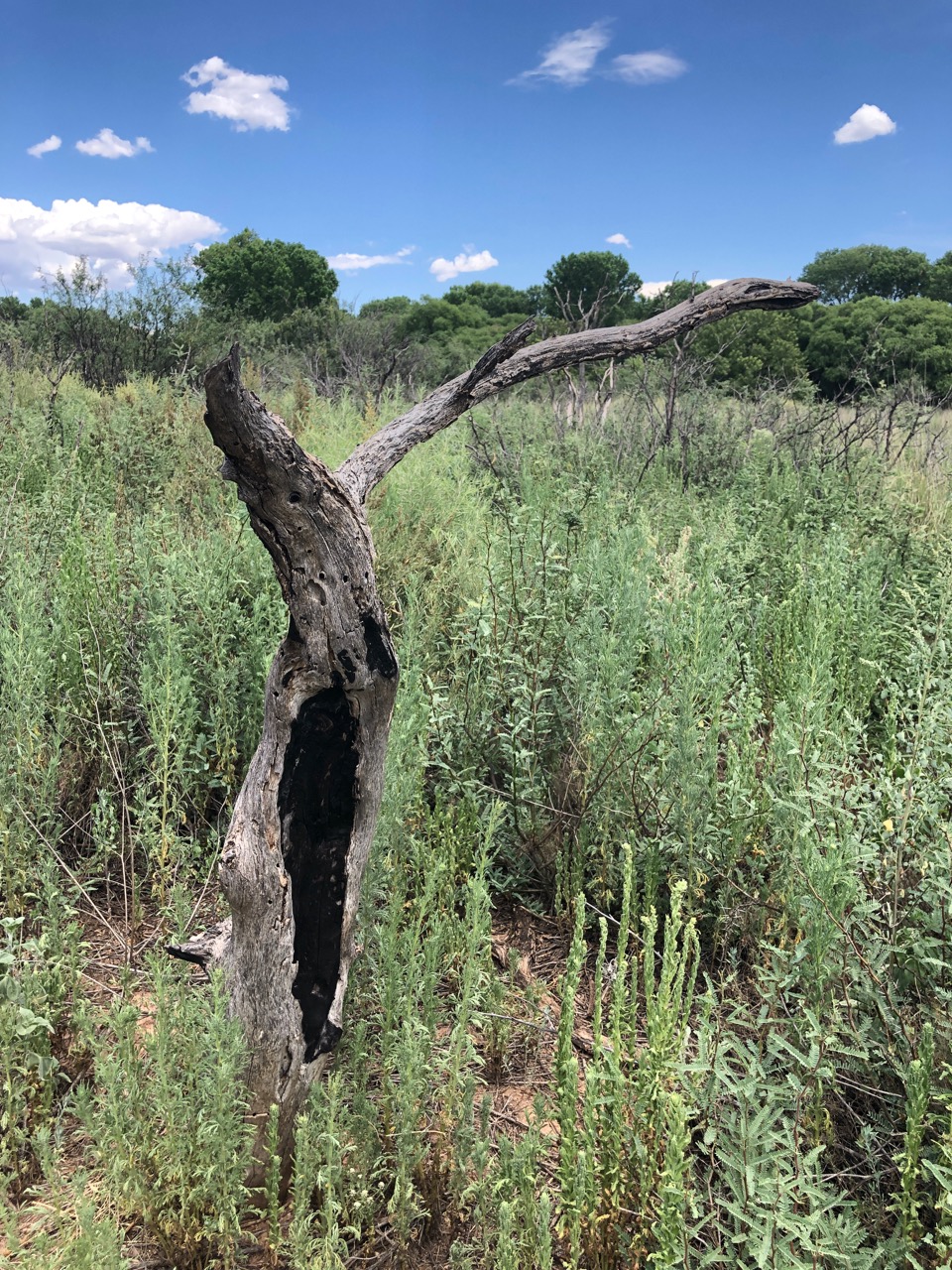 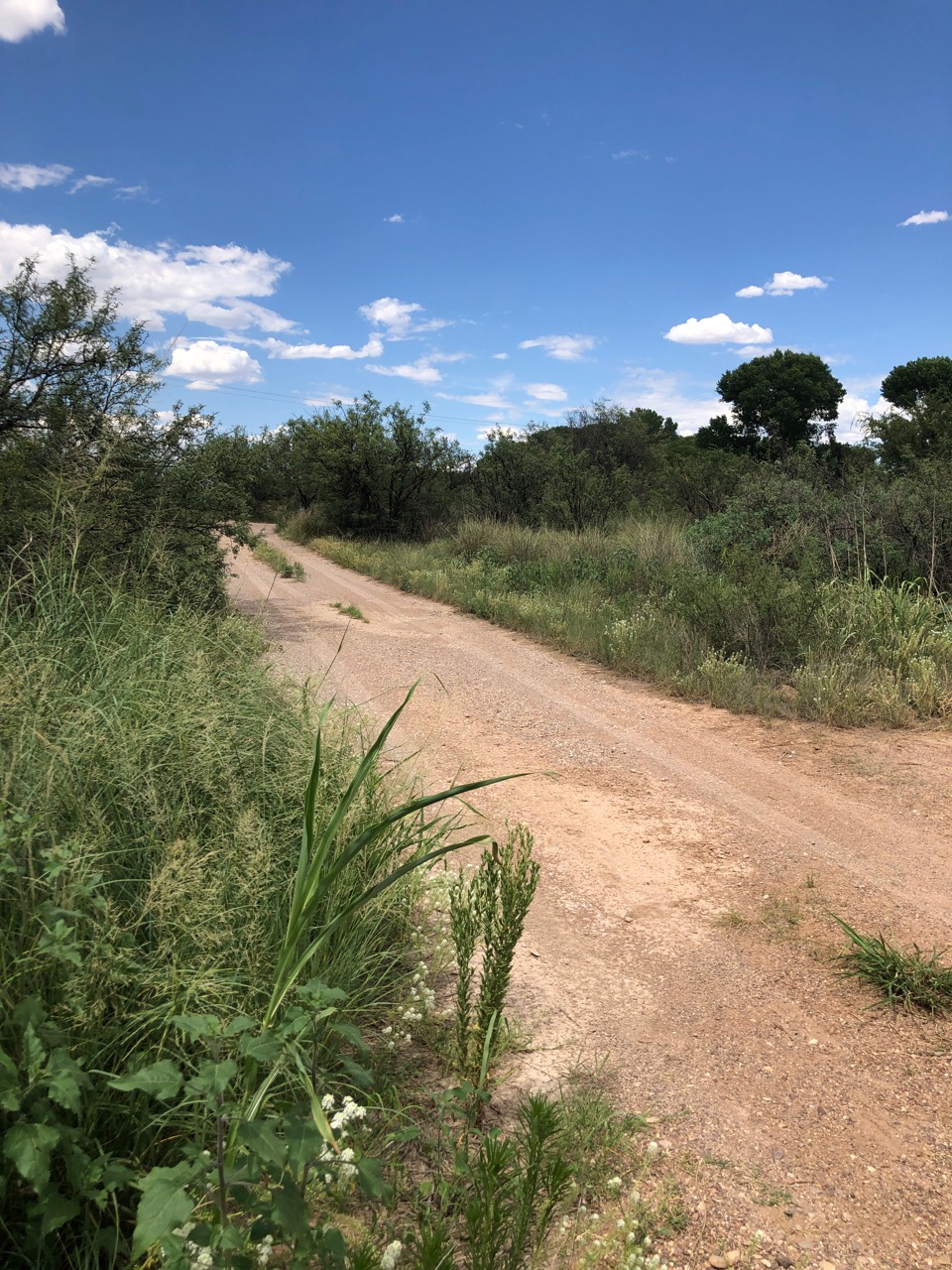 I came to an intersection where I had three choices to chose from ... left right or cross this road and follow that thing that looked like a path. I did that. 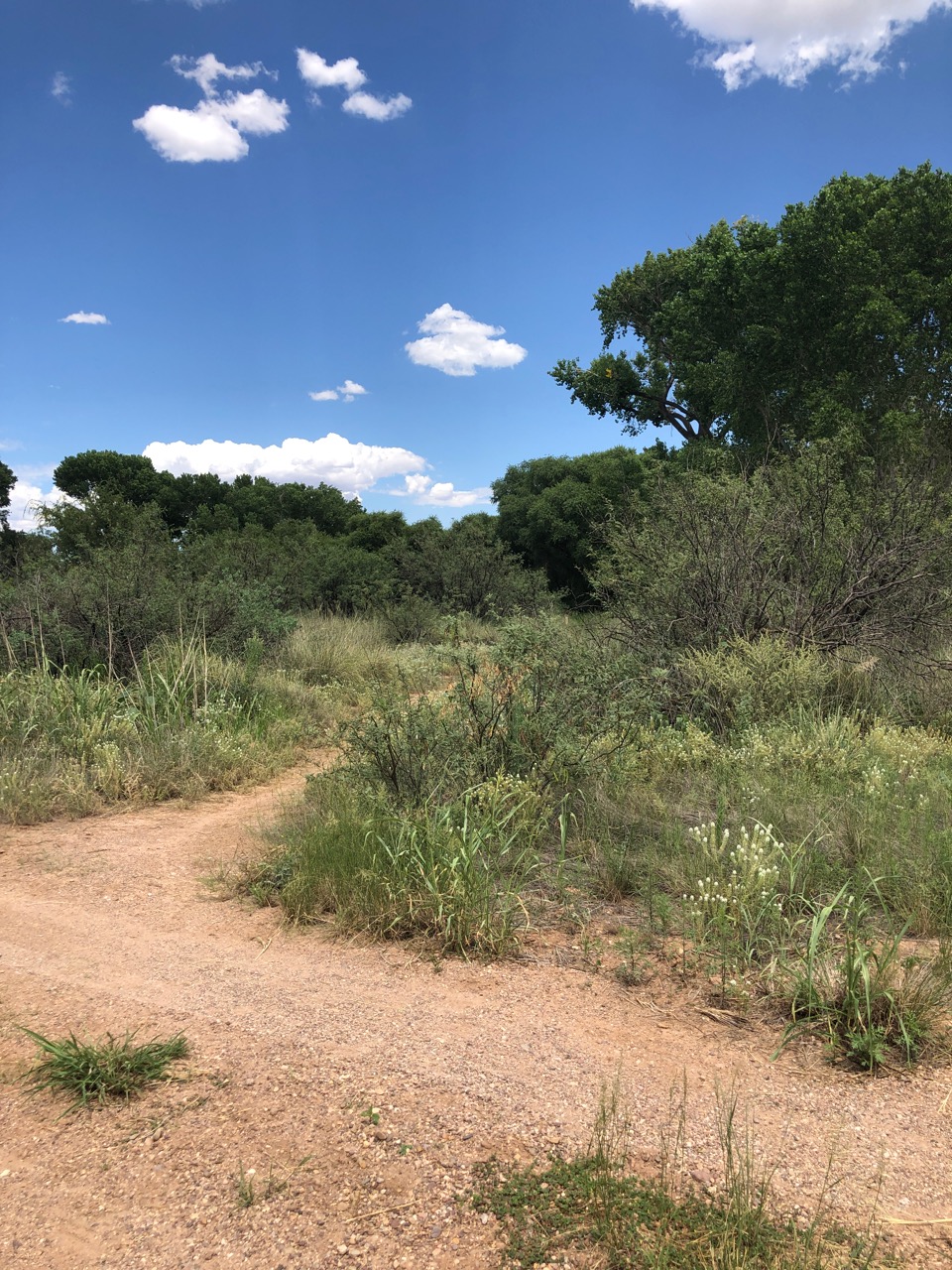 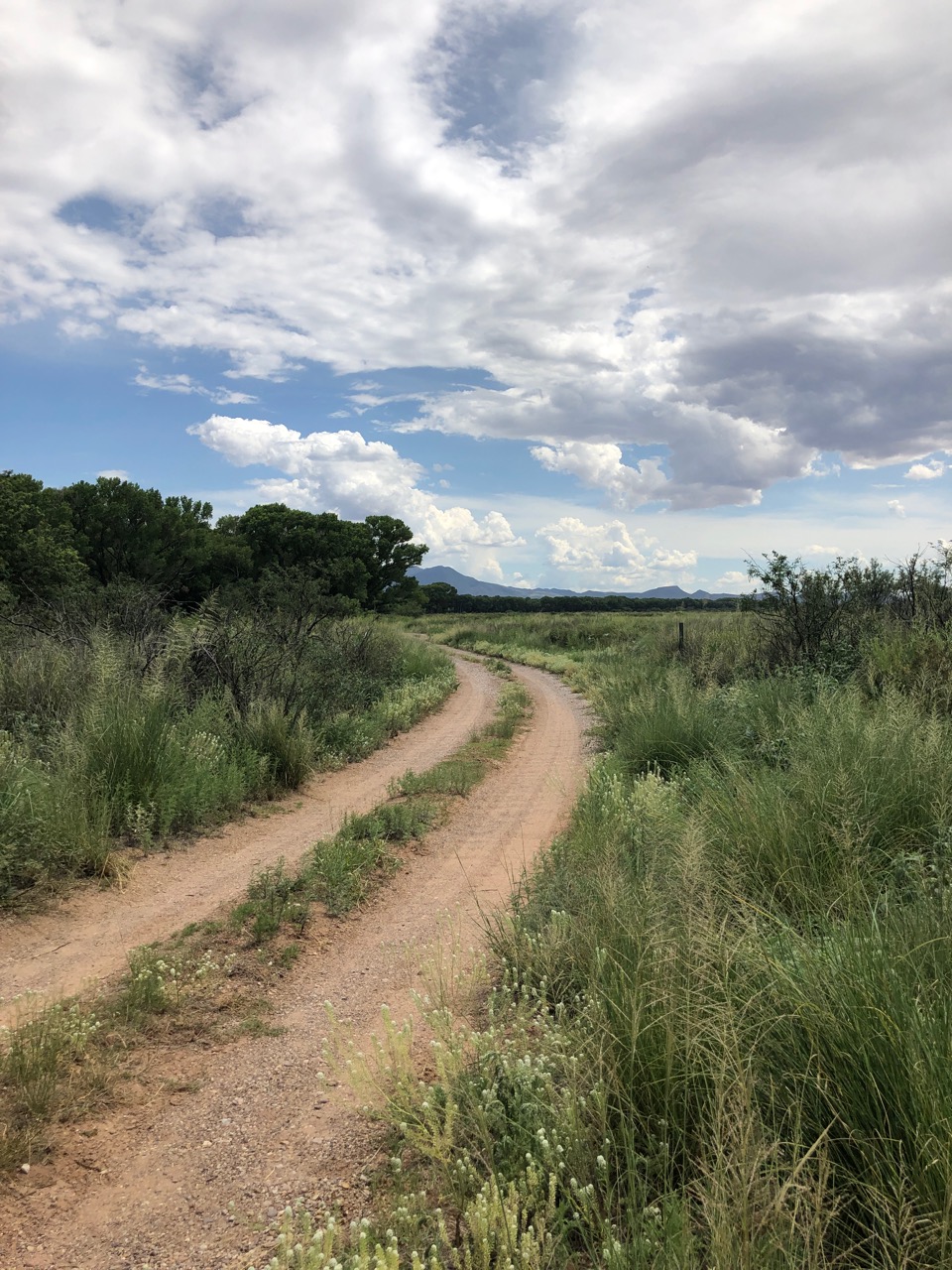 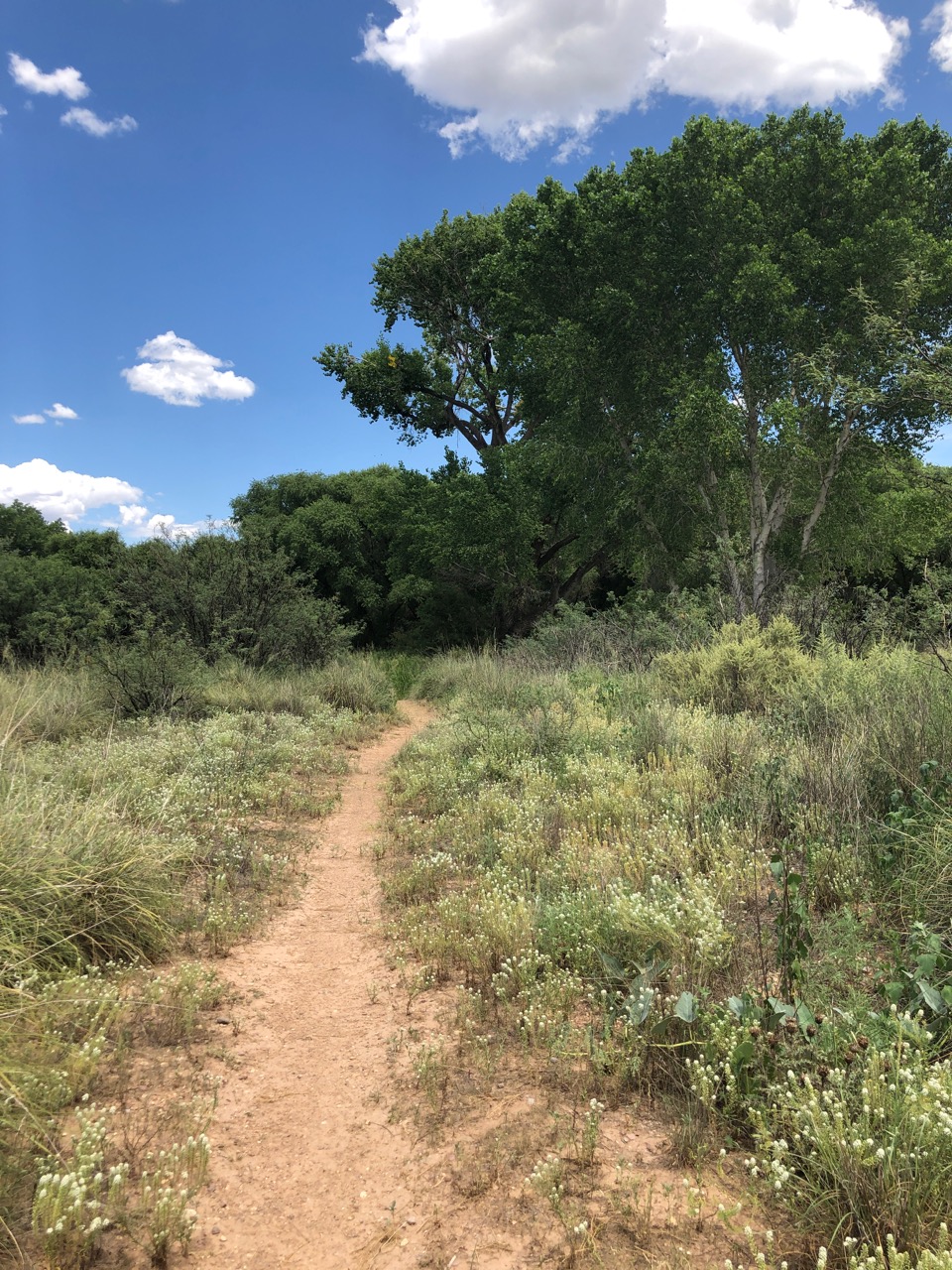 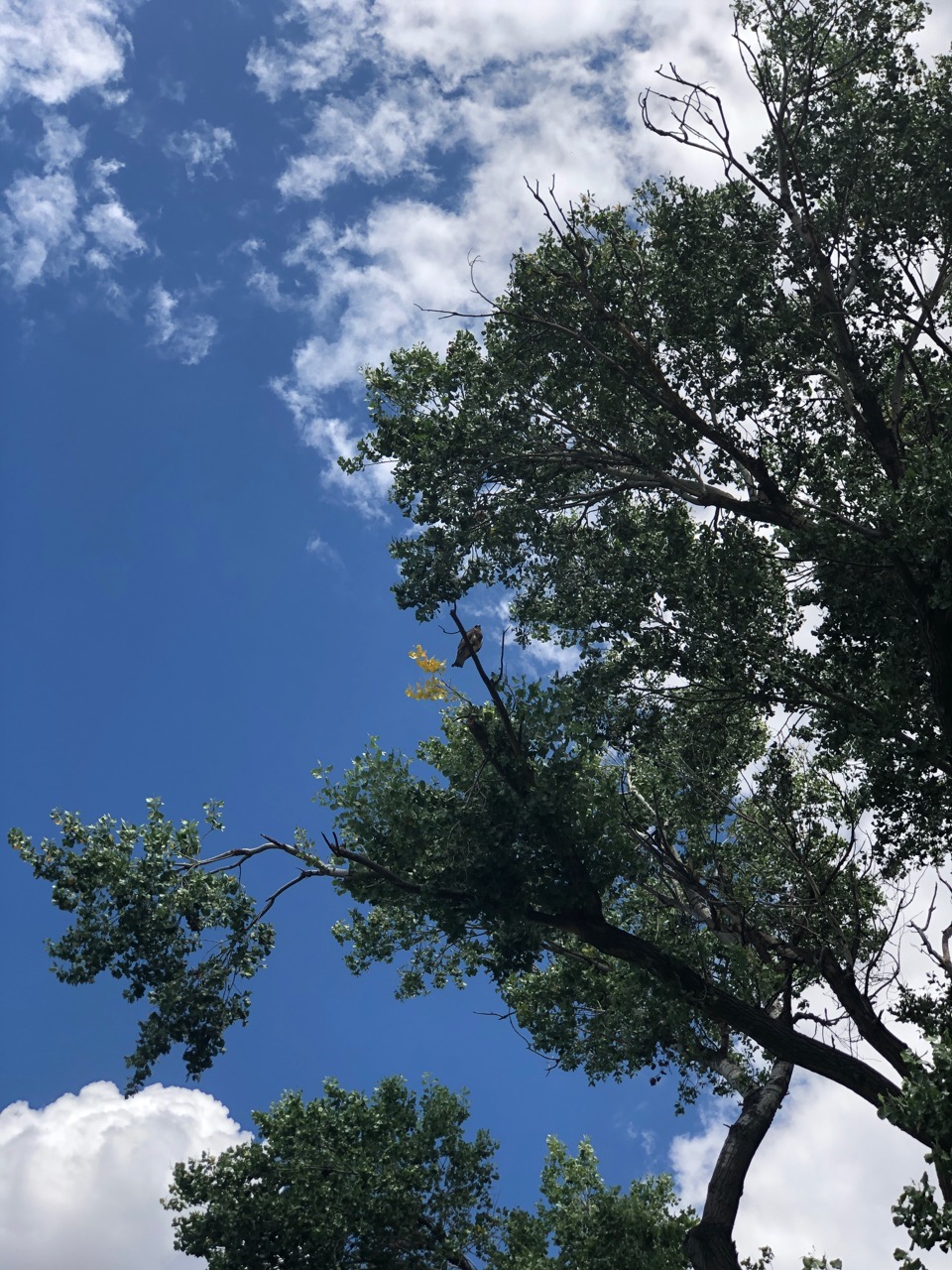 I was hearing a bird from above me telling me hello ... I found it in the middle of the photo. 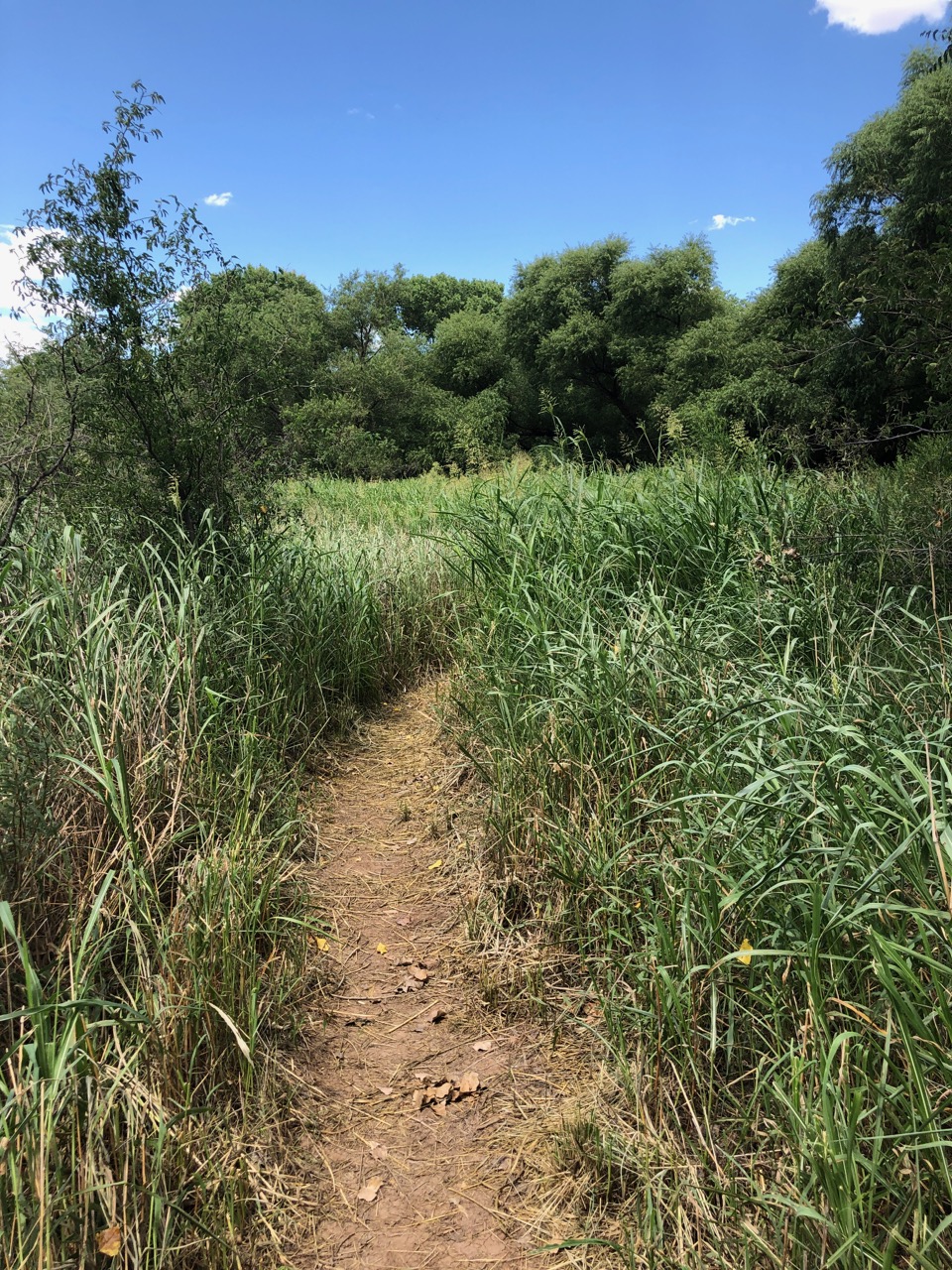 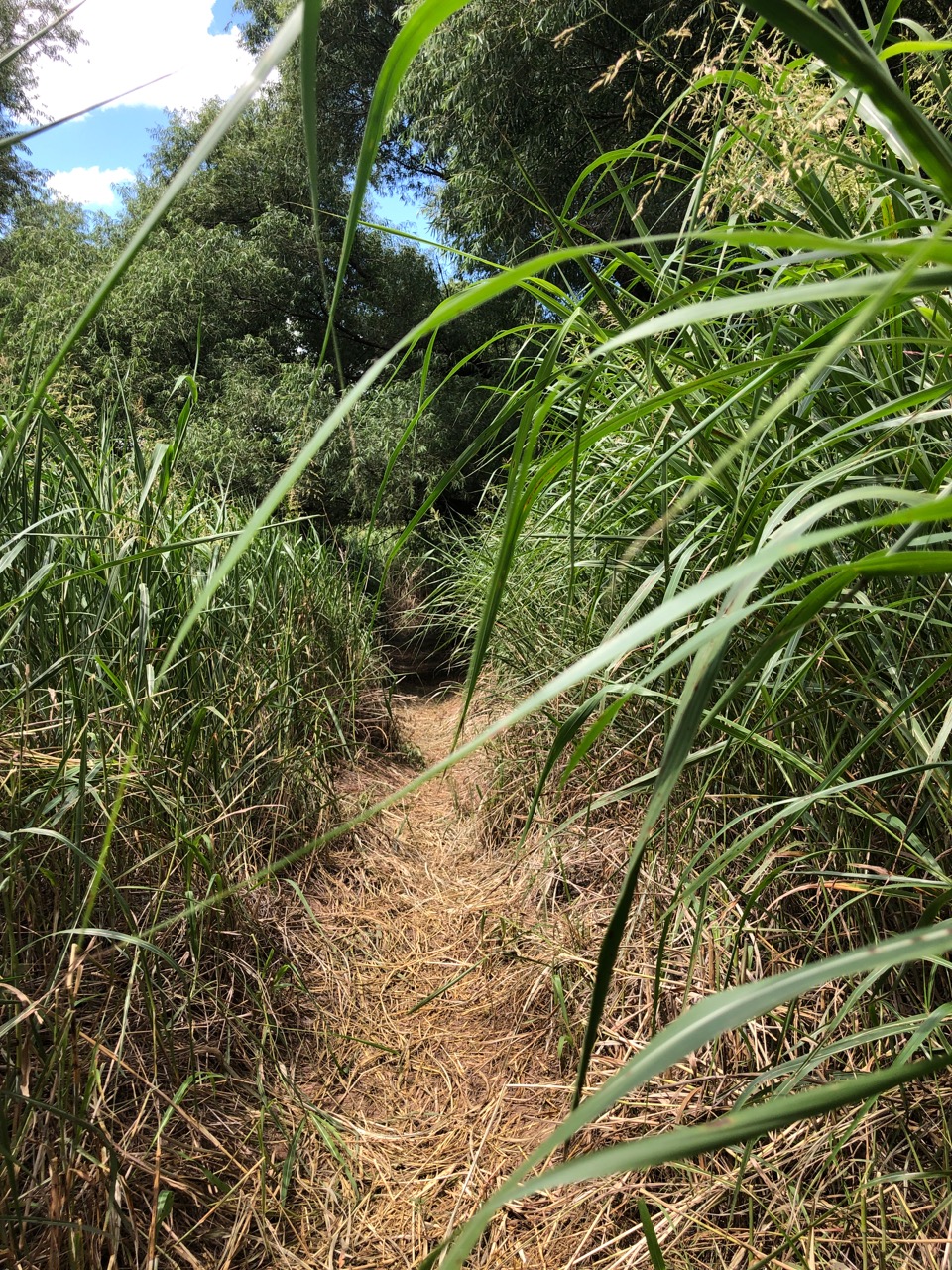 The friend in Chicago told me this looked like I was hiking in the African brush. The grass was taller than I was. 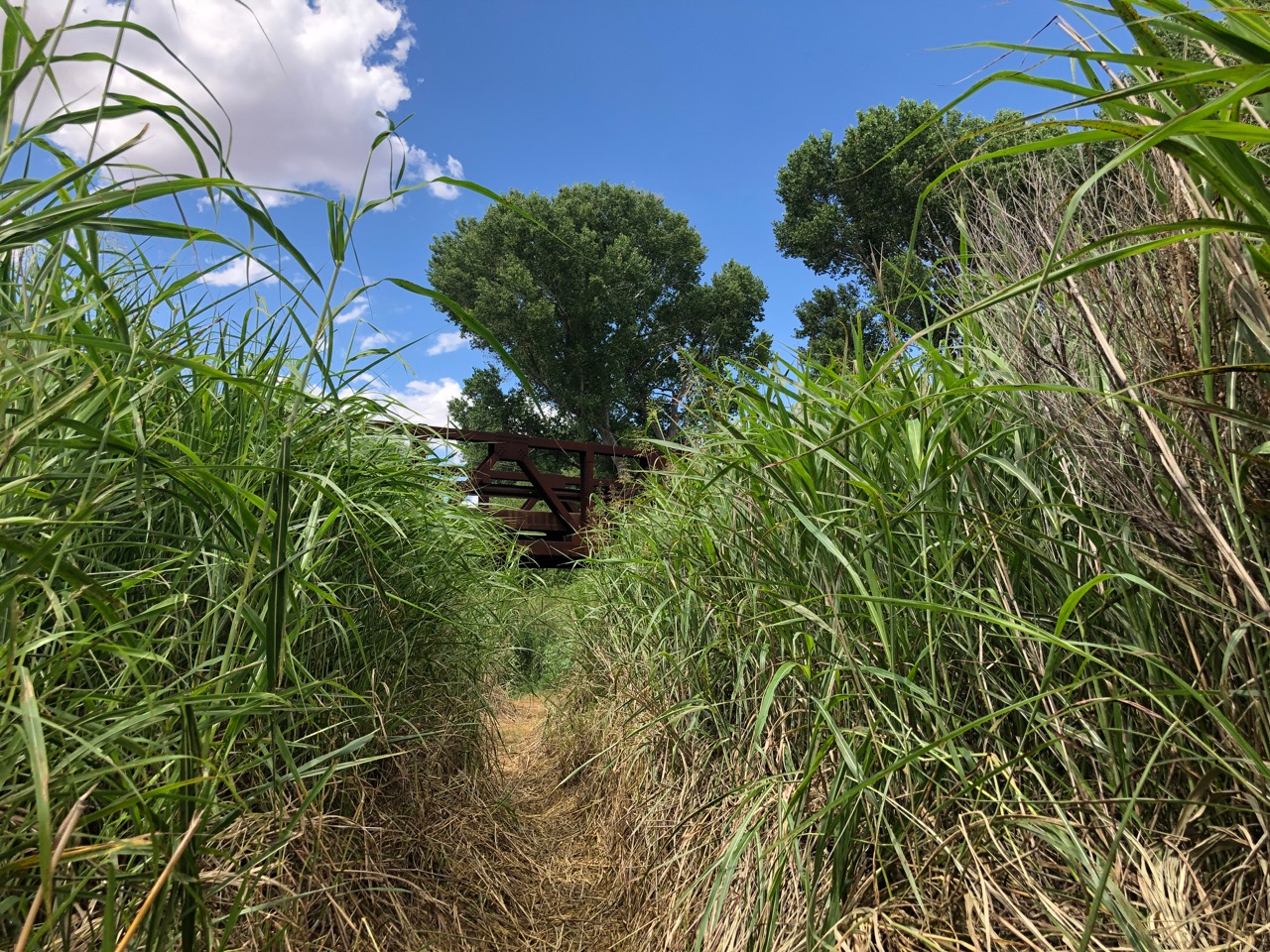 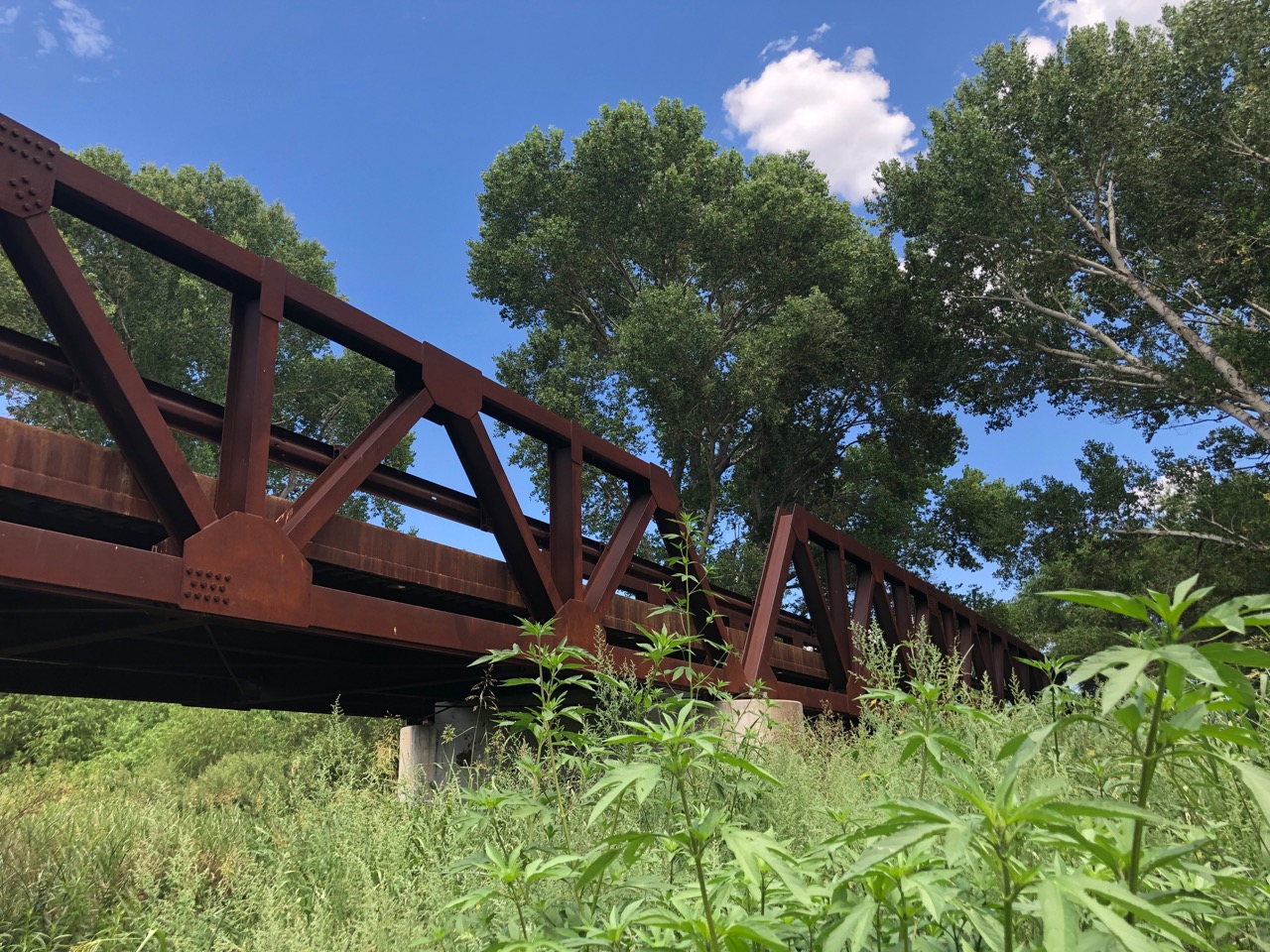 There it was ... out of nowhere. The solid steel ONE LANE Hereford Bridge on Hereford Rd. I took a short break from the sunshine and stood in the shade under the bridge. Some people have asked me about illegal immigrants in the area. On my two hikes, all my bike riding south of town and within 10 miles of the border ... I have never seen any signs of illegal immigrant's traffic. 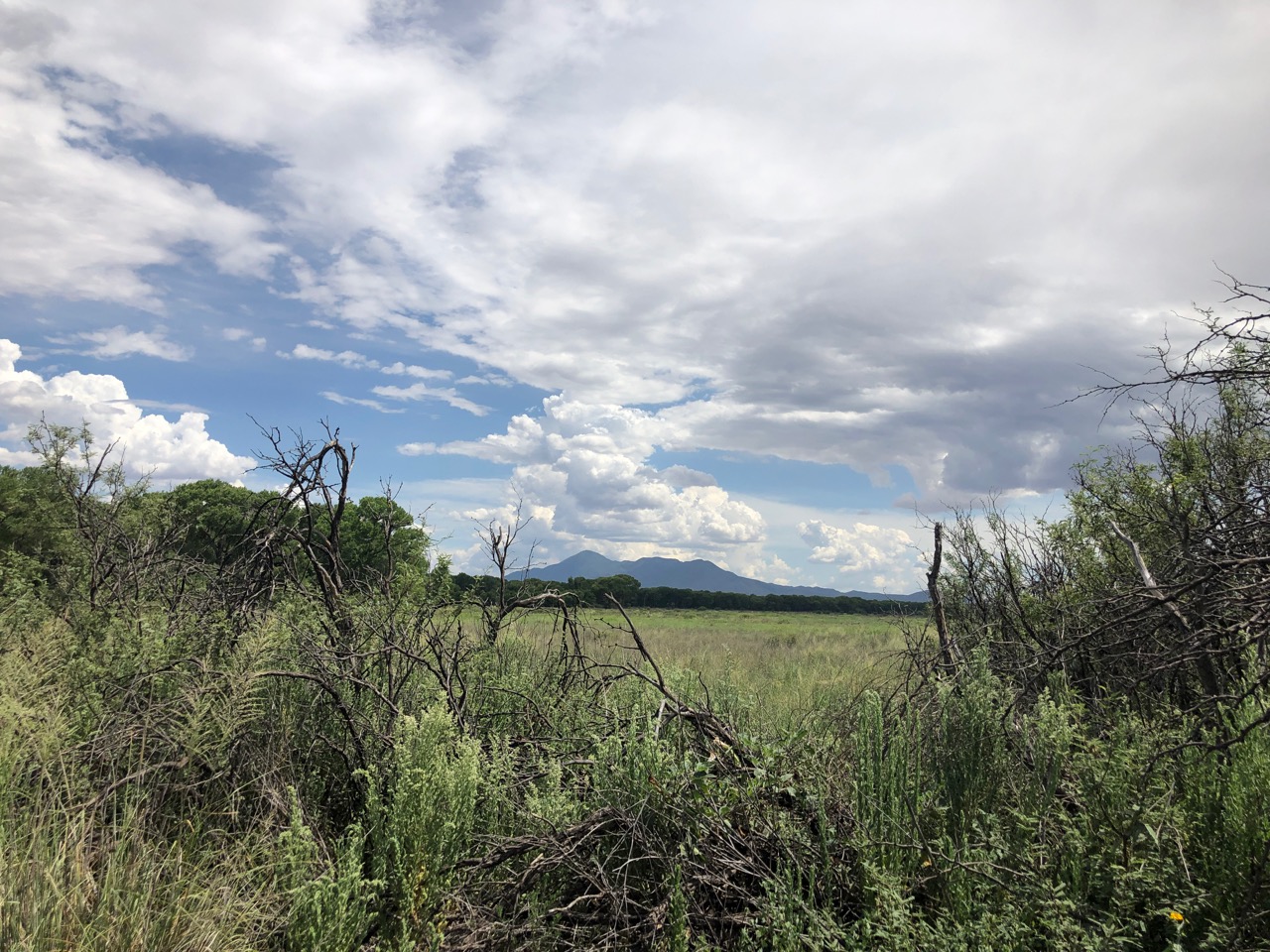 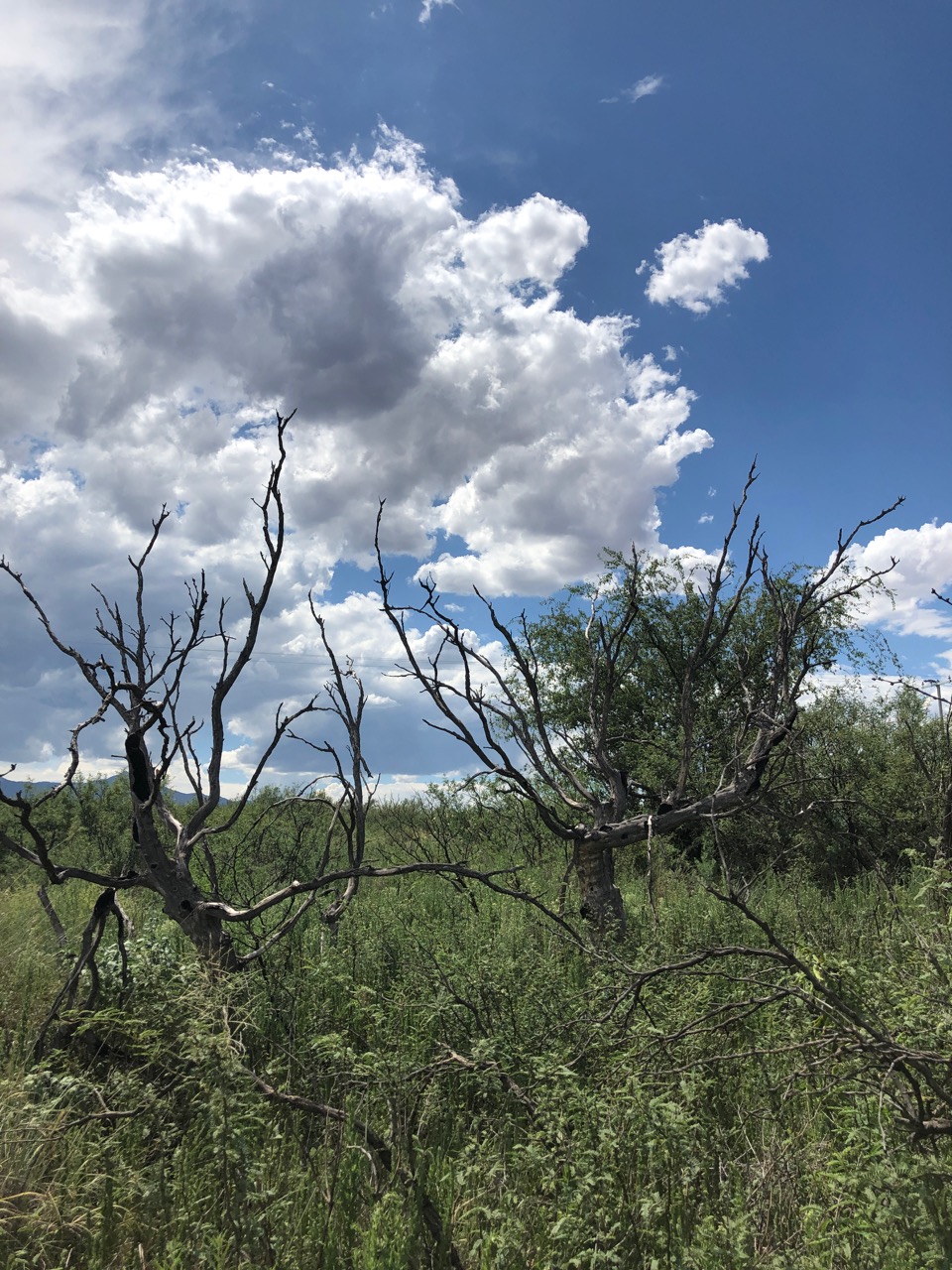 Another tree that I think was in the June 11 fire.

After that I wanted to check out Best Buy ... no ... not for electronics or cameras ... I had a $25 reward left from my June purchase of a washer and dryer ... they gave me more but what I had left had to be spent by the end of this month or loose it. Online I had found what I call a velcro watch band for my Apple Watch, they call it a nylon watchband. Either way it fastens the way I wanted. They actually had some in the store ... so I walked out with the new band and only had to pay sales tax.

I wanted to check out a store at the mall called Dillards. I was pretty sure what type of store it was but needed to see it. I was happy to see it was very very similar to Macy's back in Indiana. I like buying quality clothes when they are on sale. This place will always have sales and has good quality for clothes and shoes. Even if I do live in t-shirts and cargo shorts.  LOL

It does not feel like a Friday.  If I don't ride tomorrow, deciding in the morning by the way my legs feel, I will definitely go hiking somewhere. I think the iPhone camera is about all I need to take on these hikes for taking photos.