The Weather Couldn't Make Up It's Mind 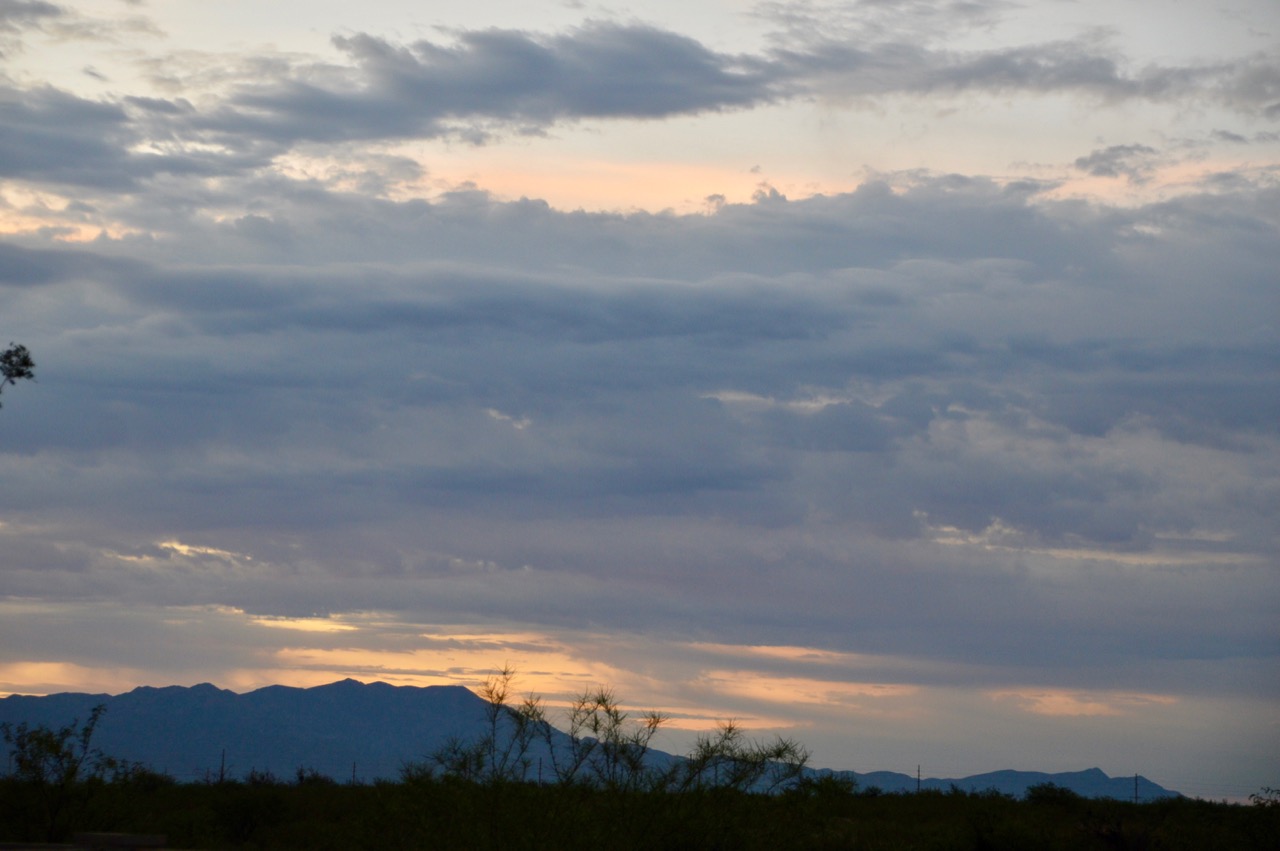 The day started with a lot of plans and just as I hoped, at 5am instead of 3am. It's always nice to look at the Mule Mountains to the left as I step out on the patio. The hounds are stepping into their yard to relieve themselves and hope I have their breakfast kibble poured by the time they are finished. But sometimes I have to grab my camera first because the sky can change quickly, even that early in the morning. The weather nor I could make up our minds today, so I might have to ramble a little in this post. 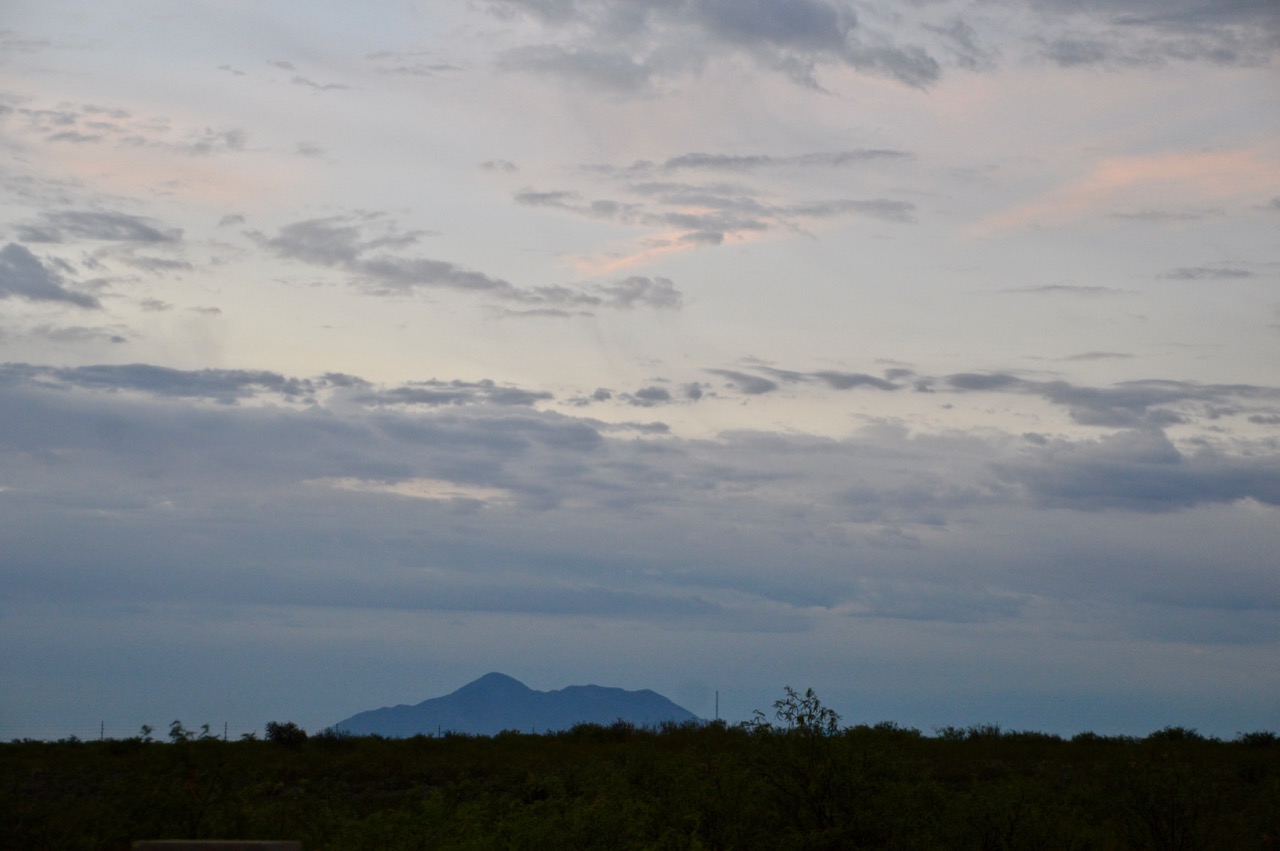 The only decision that was made and kept, I had decided today I would take all of my photos, no matter where I went or where I was, with the older dusty Nikon D3200 and the Tamron 18-200mm lens. they both look as if they've been through the desert and back. Yet, any dust seen on either piece is dust from 'the tropics' of Southern Indiana and not SE Arizona. 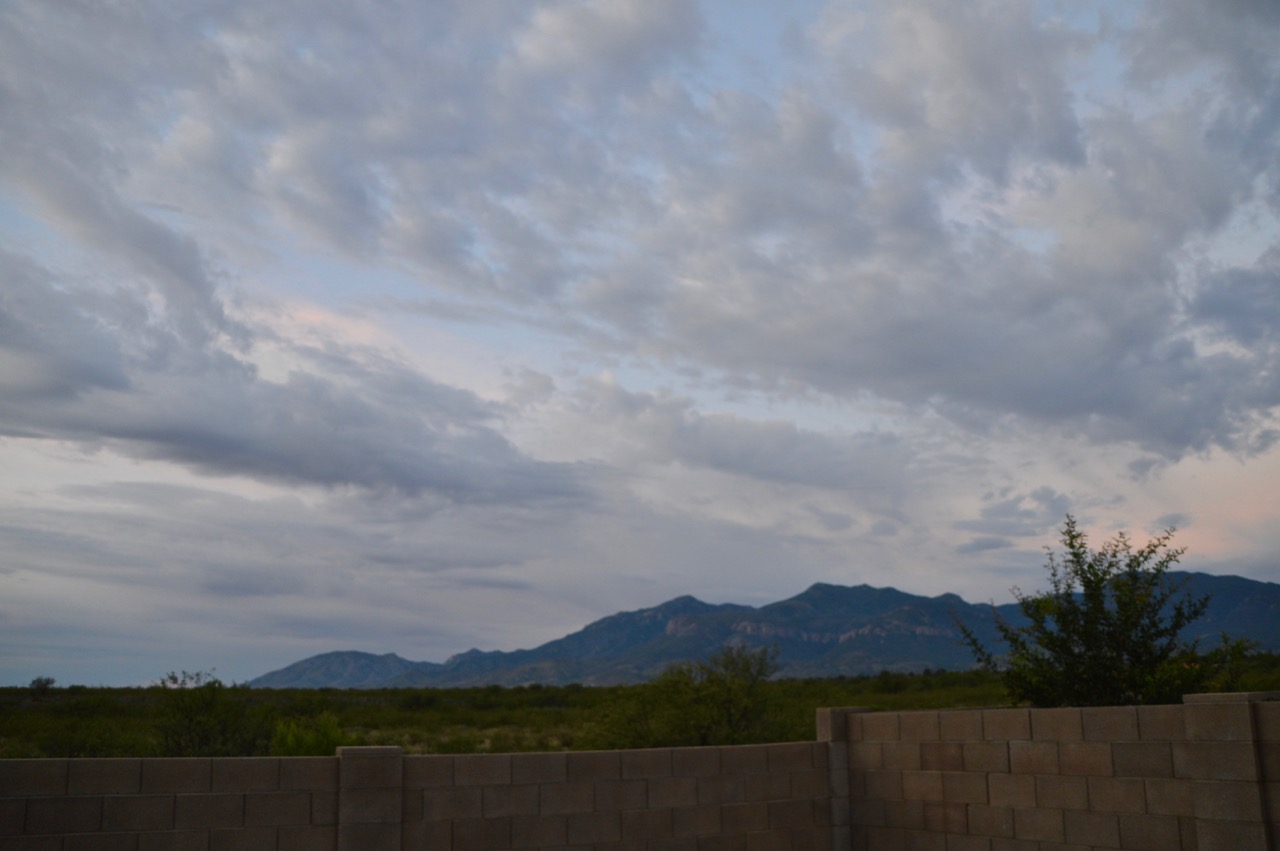 My first shots of the day are always the same three, moving from left to right as I stand on my small patio. Just like I did when standing outside on the step overlooking the highway and taking a picture the corn or soybean field 365 days per year back in Indiana. I always thought it was a nice way to see the change of seasons, the changes in weather and crops planted.

I expect to see the same changes within these three photos each day. It's hard to believe that sometime here, I will not be living in shorts and t-shirts every day ... I did bring a pair of jeans with me and the lined Wranglers just in case ... or was it more paranoia? 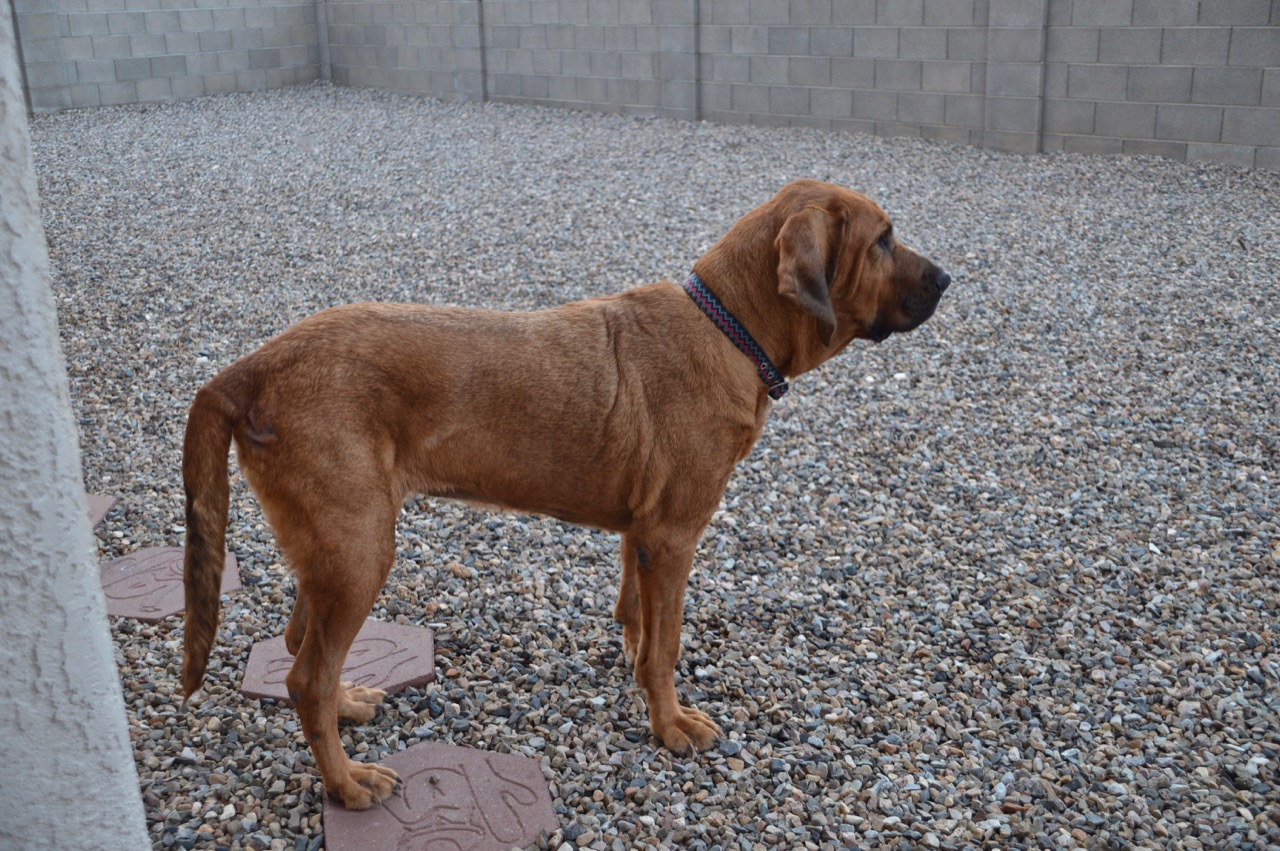 Another decision I made was before I did any walk I was going to have a cup of coffee, the school bus could be damned. So what if it was parked as we finished our walk? Stella likes kids yet some adults we have met in the early morning walks are afraid of a dog her size ... but they eventually come around when they see that Stella is harmless.

She starts every morning after she eats doing this ... taking a few steps in the yard to sniff the air, working her nostrils as he turns her head from one corner of the yard to the other. Is it the scents she has picked up or has her ears found something far away that she can't quite figure out what the sound is? At that time of day the sound of different birds are everywhere. 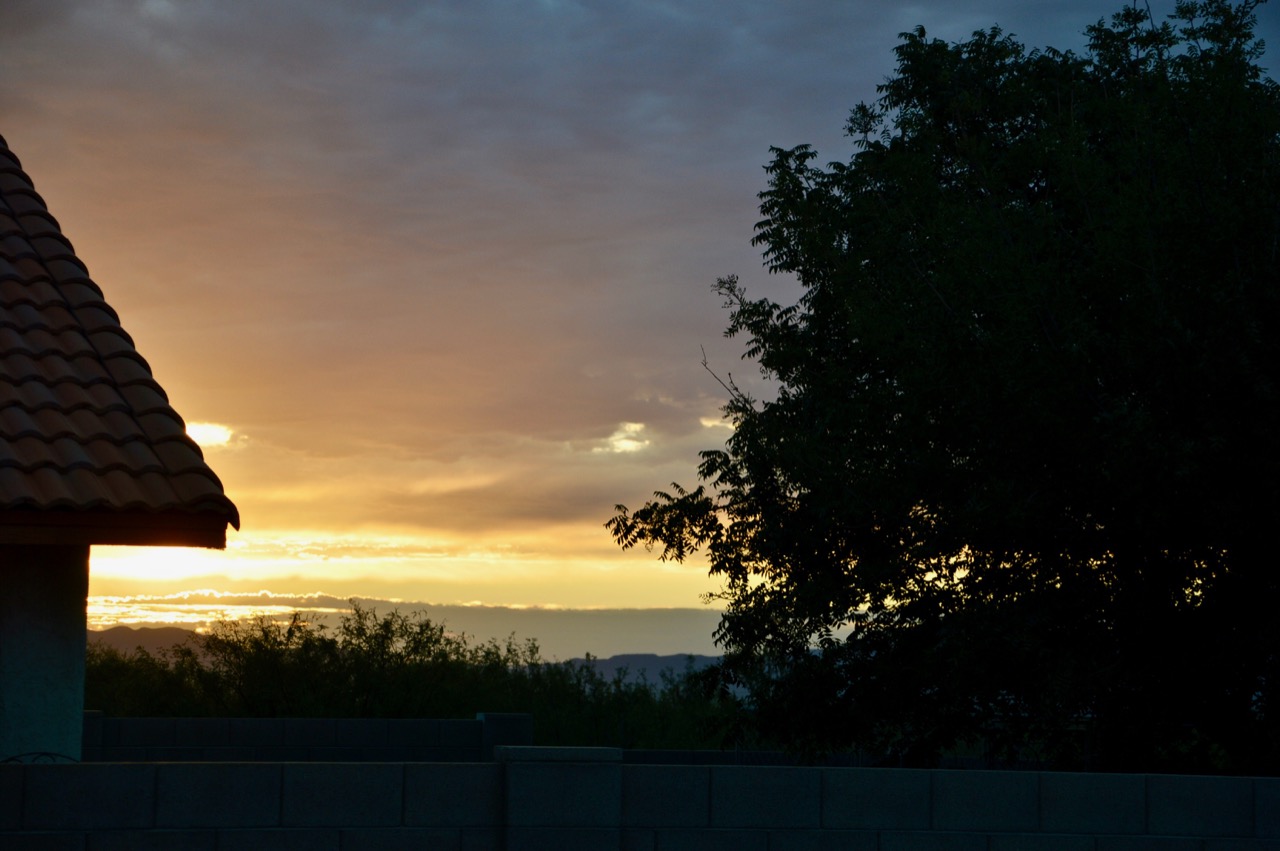 It seemed like my day was planned before I finished that first cup of coffee with the huge urge I had to go hiking locally instead of riding my bike. The feeling between the two choices were not close and I knew exactly which trail I was wanting to see. I see it every bike ride, south of Ramsey Canyon Rd and the dirt path looks like it goes straight up the side of the smaller mountain. As I make the right turn riding I thought I saw a small parking area at the trailhead ... but the satellite map told a whole different story. 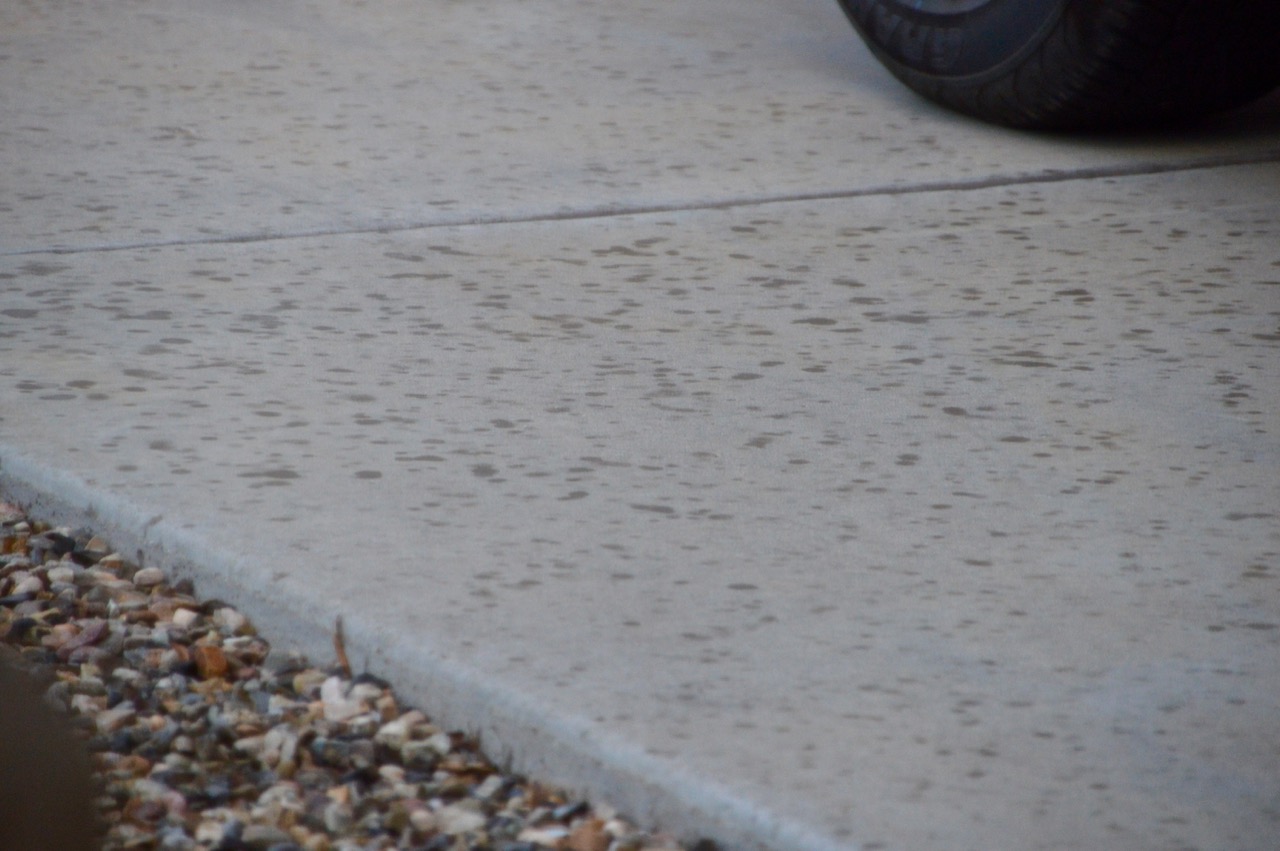 My first clue that the day was out of whack and not my braincells was just about the time Stella and I were crossing the street on her walk on the way back into the the neighborhood I was hearing, then feeling some really big rain drops!!! How could that be?? No chance of rain, sunny skies with scattered clouds and two different joggers had just crossed in front of us. 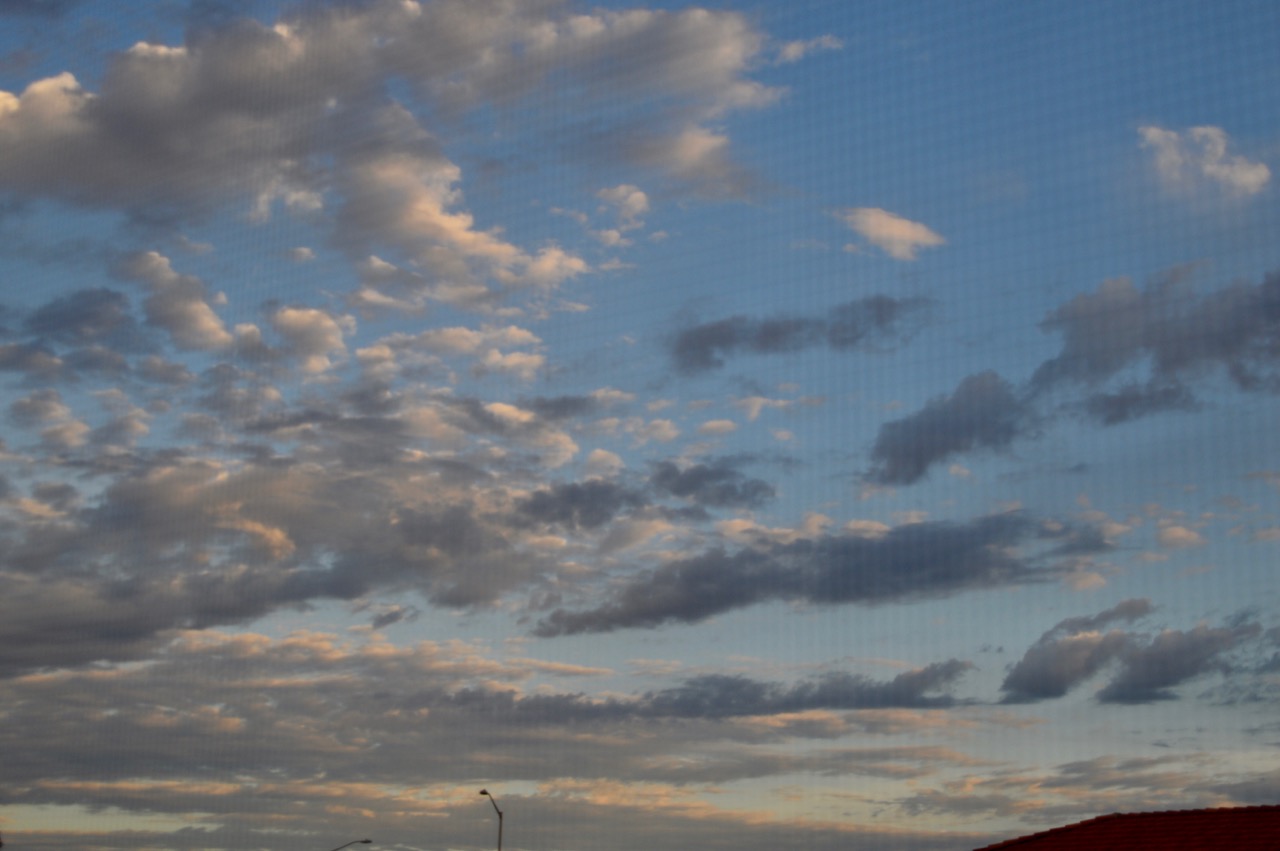 As soon as I walked inside I grabbed the camera and headed back to the front yard to capture the sky I was talking about ... but there were signs in the backyard that yes ... it was raining. The smell of rain was strong but it was a light rain.

This threw doubt into the plans for the day. I guess I could take a light rain jacket and still enjoy the morning. I needed another cup of coffee before I could make a clear decision. 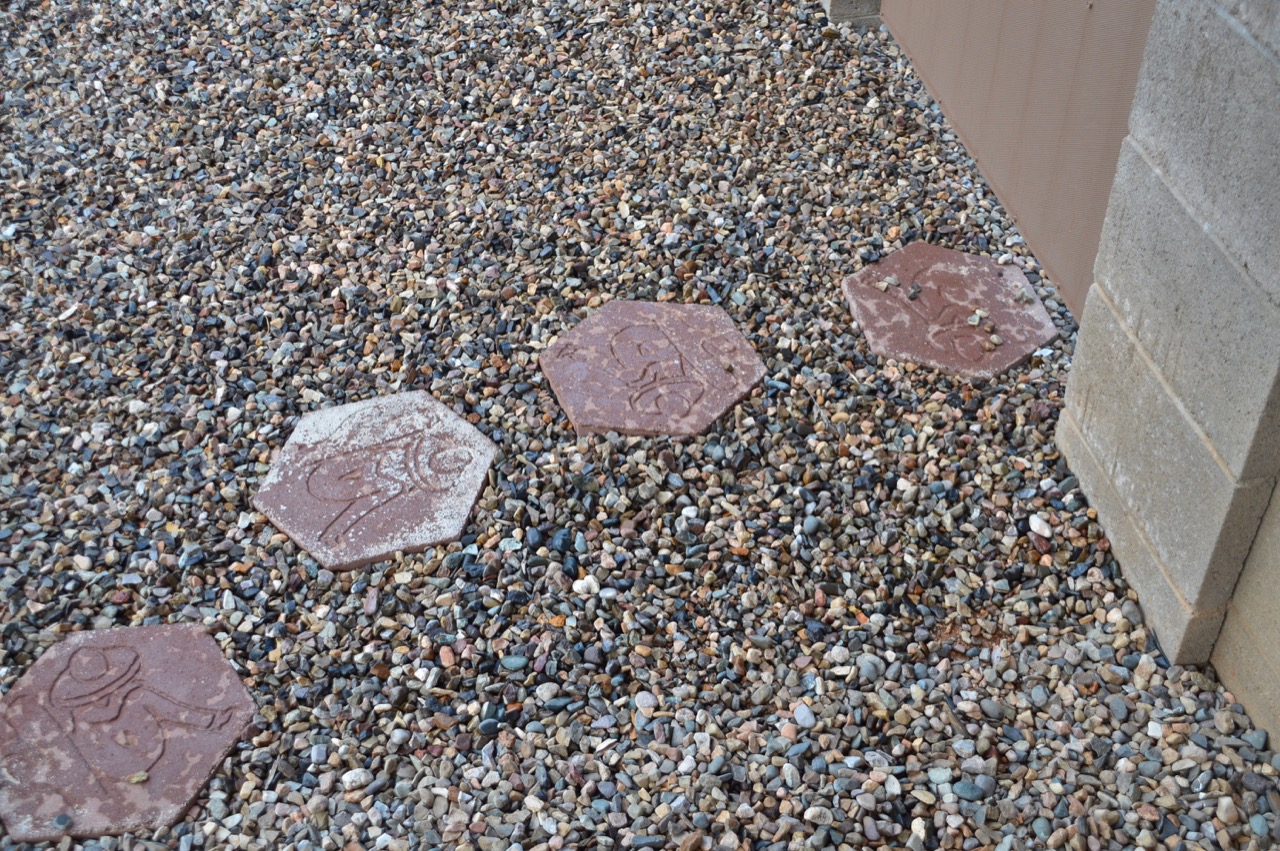 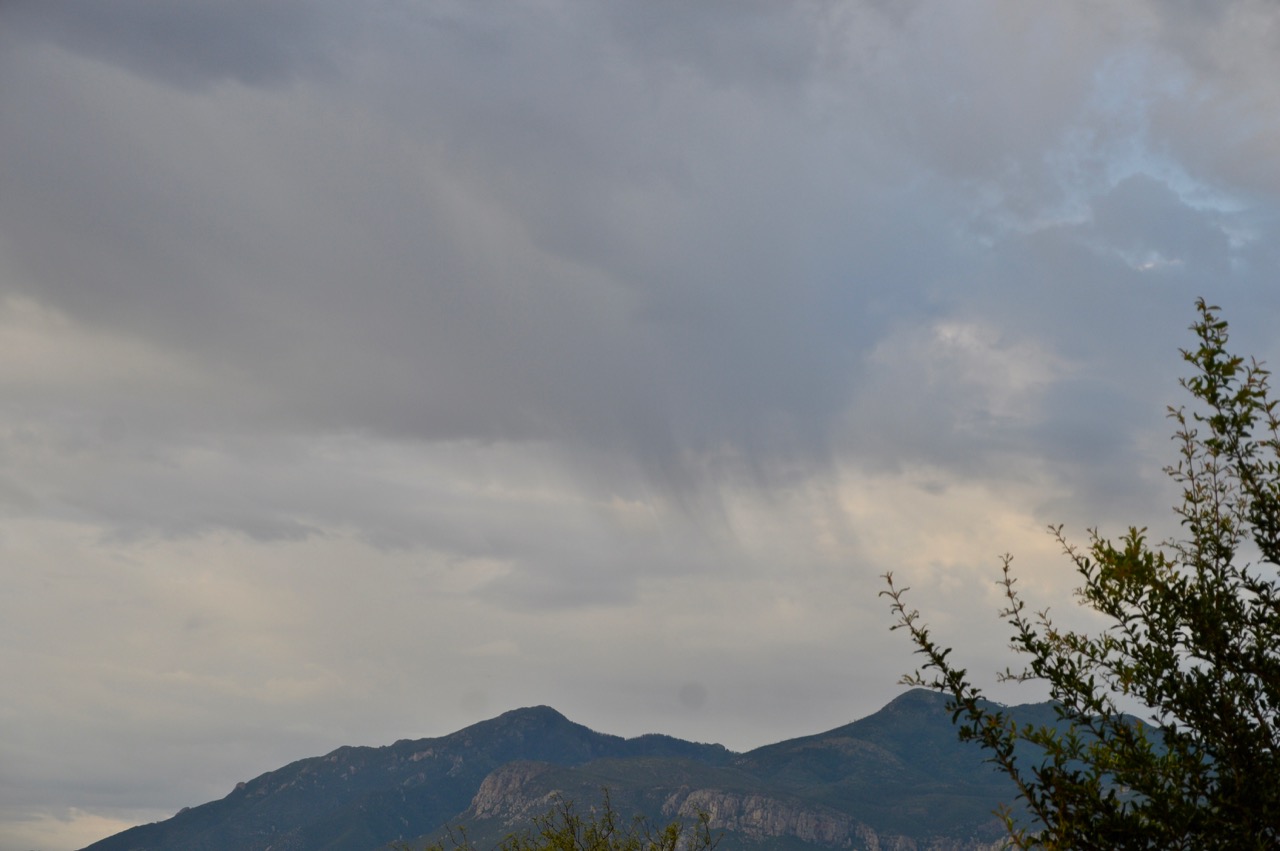 This was toward the trail I wanted to hike and as you can see it was raining. So with that in mind I sat down to take another look at that area on Google satellite map and hit the wall. Not seen by where I was on the road just ahead of where I would have parked the car, was a huge gate spreading across not only the small dirt lane but across private property. I'll have to take a drive out that way and see if they have no trespassing signs as many of the other property owners do in that area. Hiking that trail may not be an option. 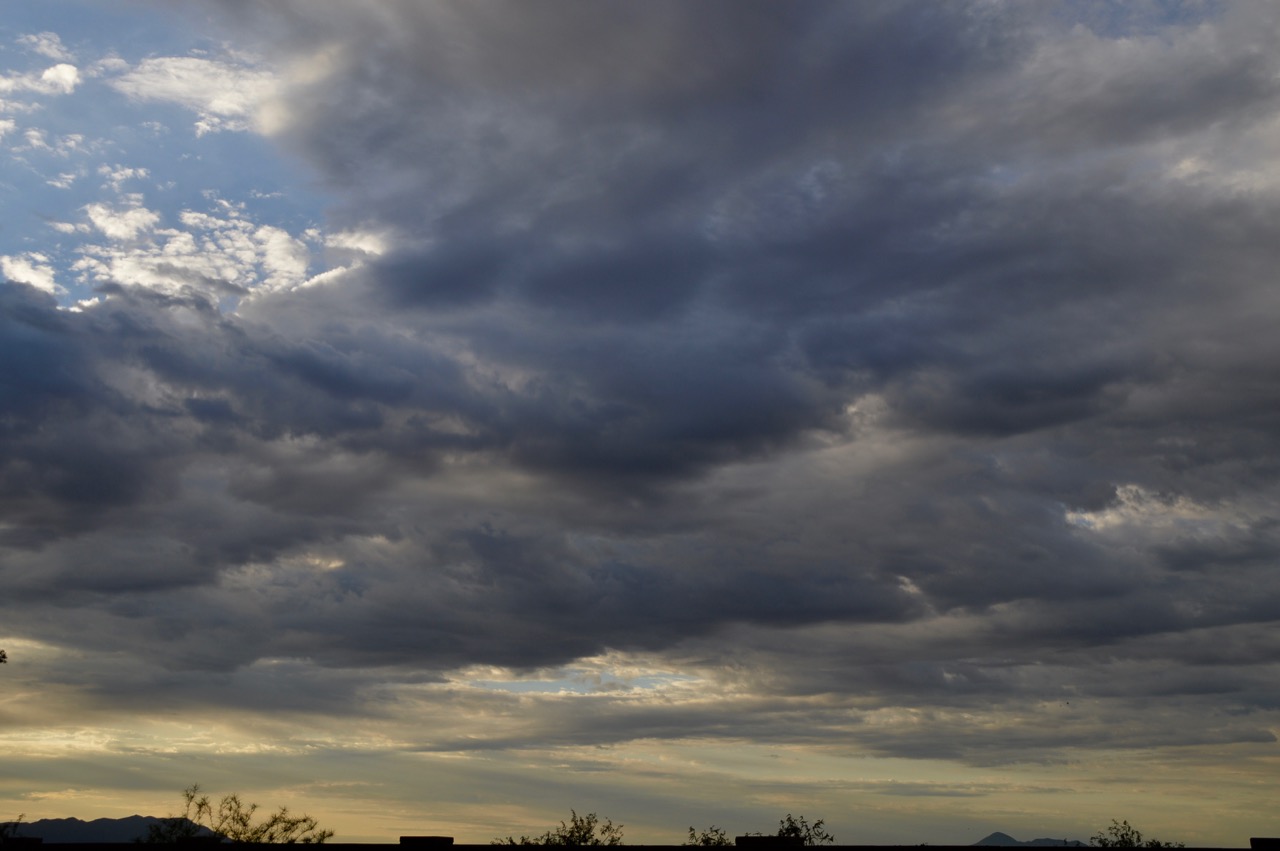 It was still very early in the day and plenty of time to change my mind and for the weather to change. I thought about going back to the San Pedro House and take their longest trail and I was ready to go right then ... problem was that is a gated property and they did not open until 9:30am. It was barely past 6:30am when I had this idea.

What about a road trip? 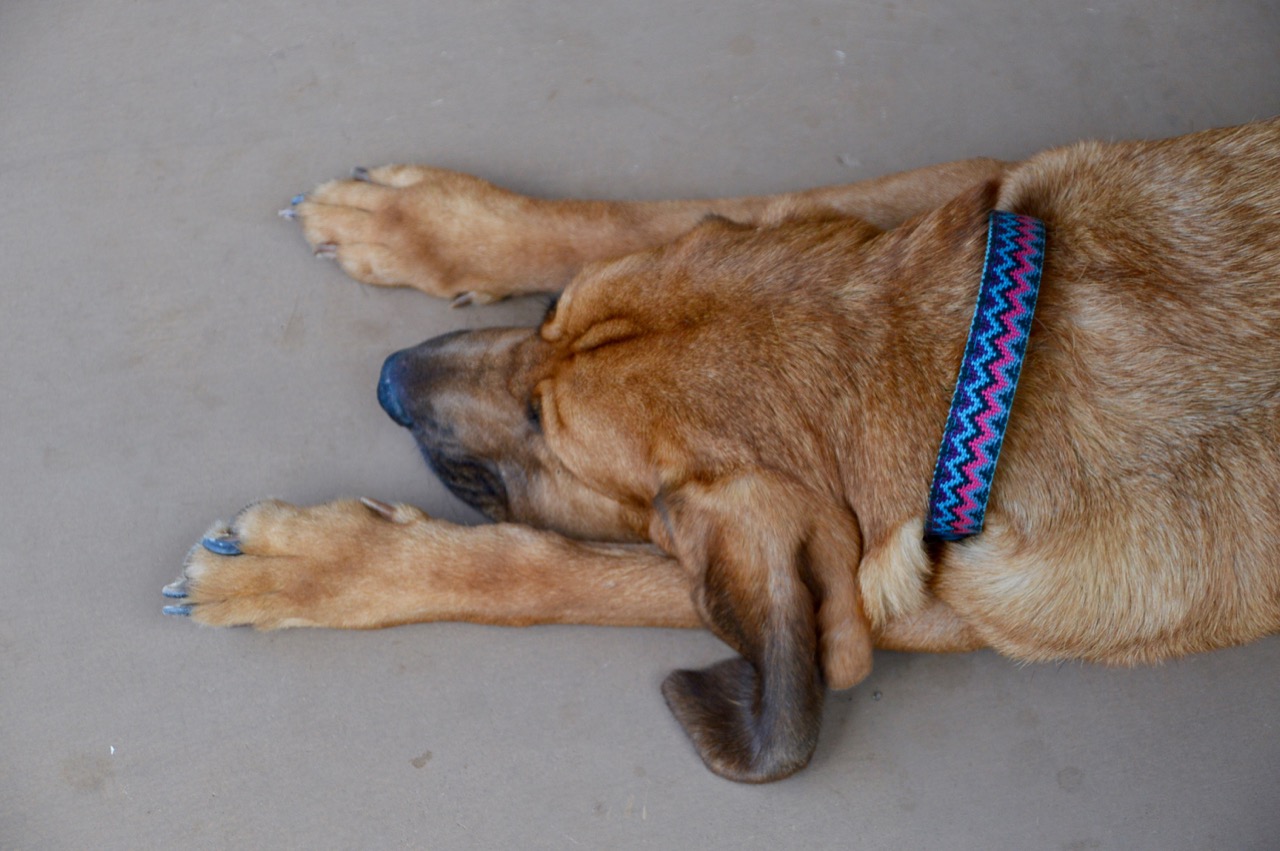 The hounds could ride in the back and sleep as I drive over to check out McNeal, Elfrida or even as far as Pearce if I were to continue north. I could circle back to I-10 to Benson and refresh those memories of the day I arrived. I drove that part of I-10 an hour after sunrise driving from Truth or Consequences, NM in the early morning hours. I had stopped there for a short 1-2 hour nap to carry me through the rest of the way. 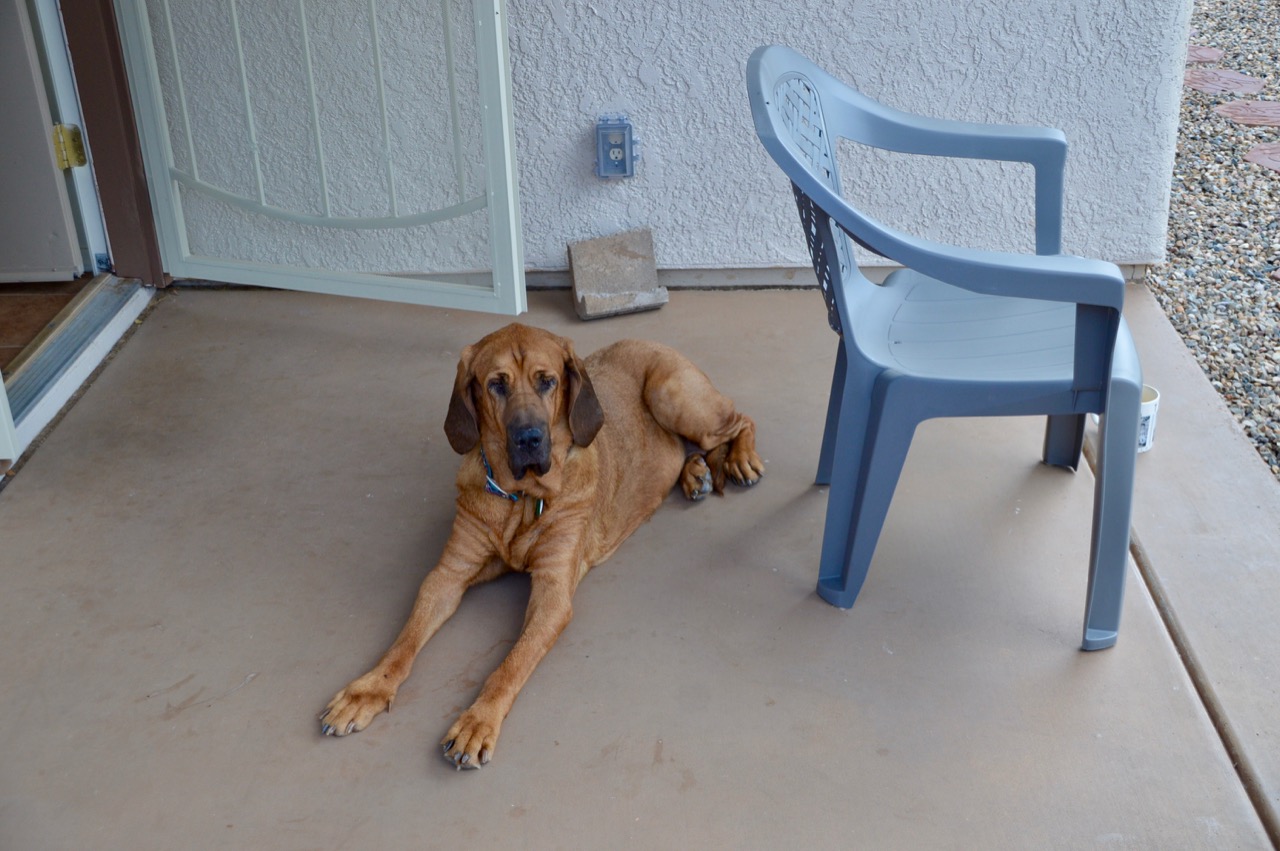 This was a day I couldn't make up my mind what to do either, so basically I ended up doing nothing ... no hiking ... no road trip. Stella as you see couldn't decide whether to stay outside or comeback inside. Heidi had not woke up since her breakfast at 5am ... oh she did one time ... to flip one ends in the deep corner of the computer room.

So with them sleeping so well ... did I really want to wake them up, load them in the car just to take a road trip? 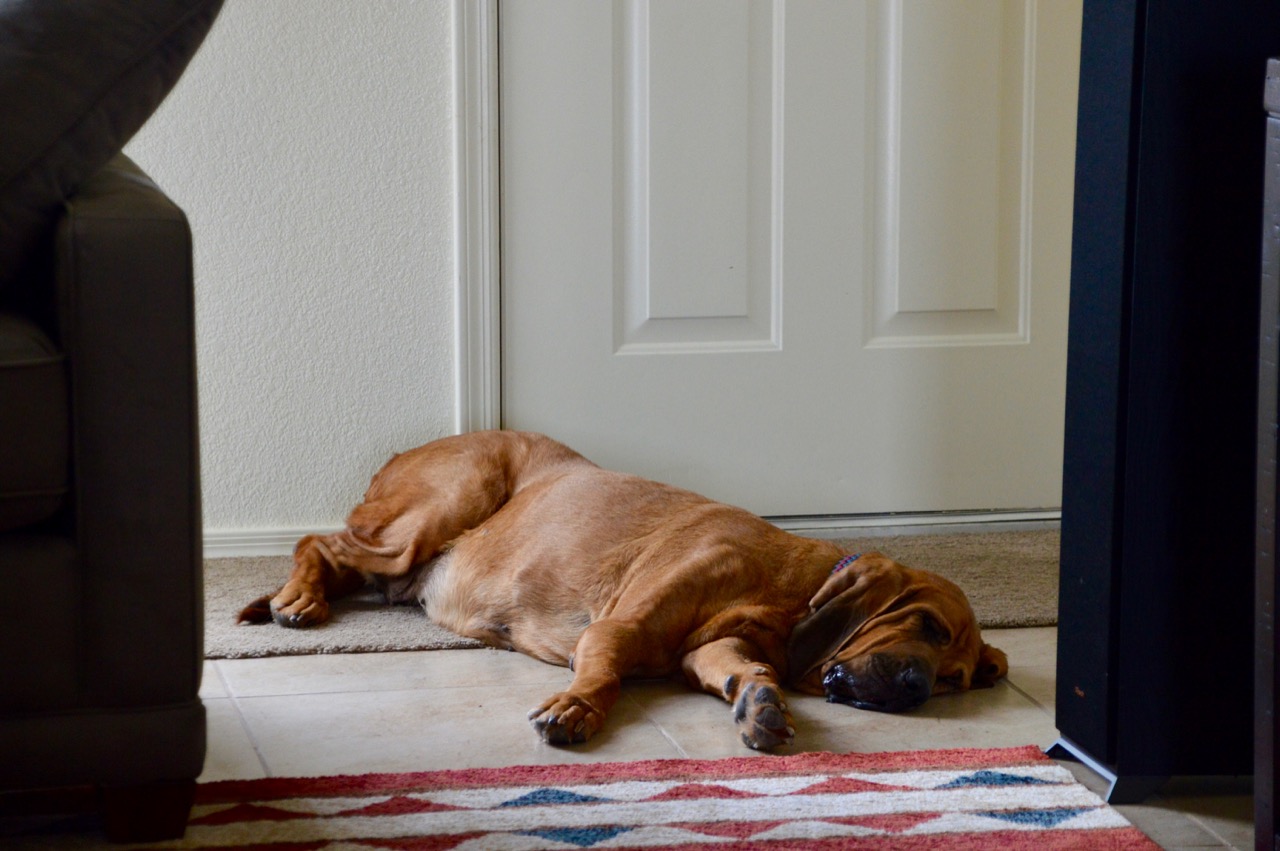 Stella decided if I was going anywhere I was going to have to leave through the garage because she wasn't moving no matter what.

We spent the rest of the morning waiting for 9:30am so the gates would open at the San Pedro House. Of course in my life an hour of waiting is like a lifetime and I can come up with a 100 more ideas by that time. And ... I did. By 9am I had the urge to take a ride around the town on the mountain bike. I stepped outside to check the weather to smell rain and hear big rain drops that I cannot see ... riding cancelled. 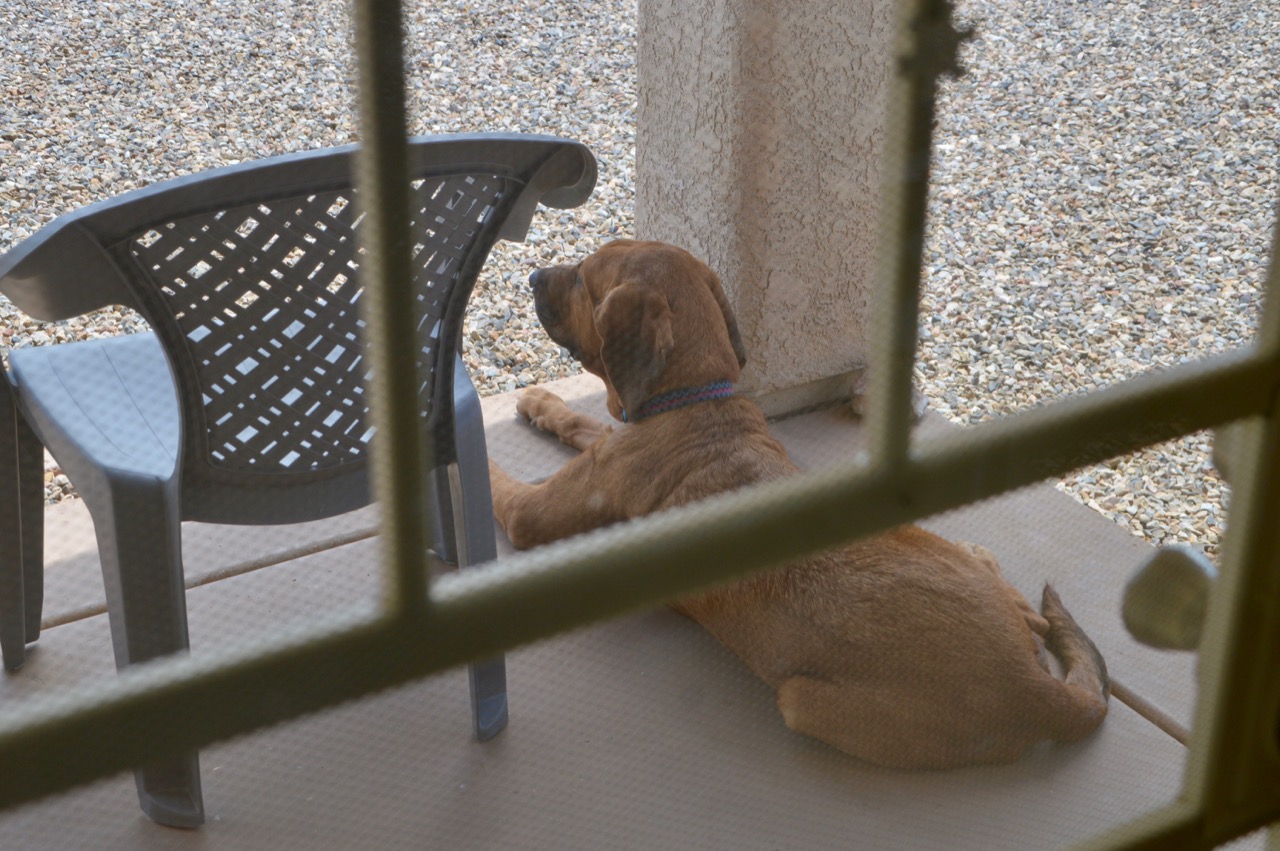 When 9:30am came around I didn't feel like heading that way. Just after lunch while Heidi and I stayed inside enjoying the AC, Stella went to the door to be let out ... this was as far as she got. It was 94° by this time and that warm patio must have felt good to her. It wasn't long before she was standing at the door. She NEVER barks to come back inside ... she just stands quietly, knowing I will show up eventually. 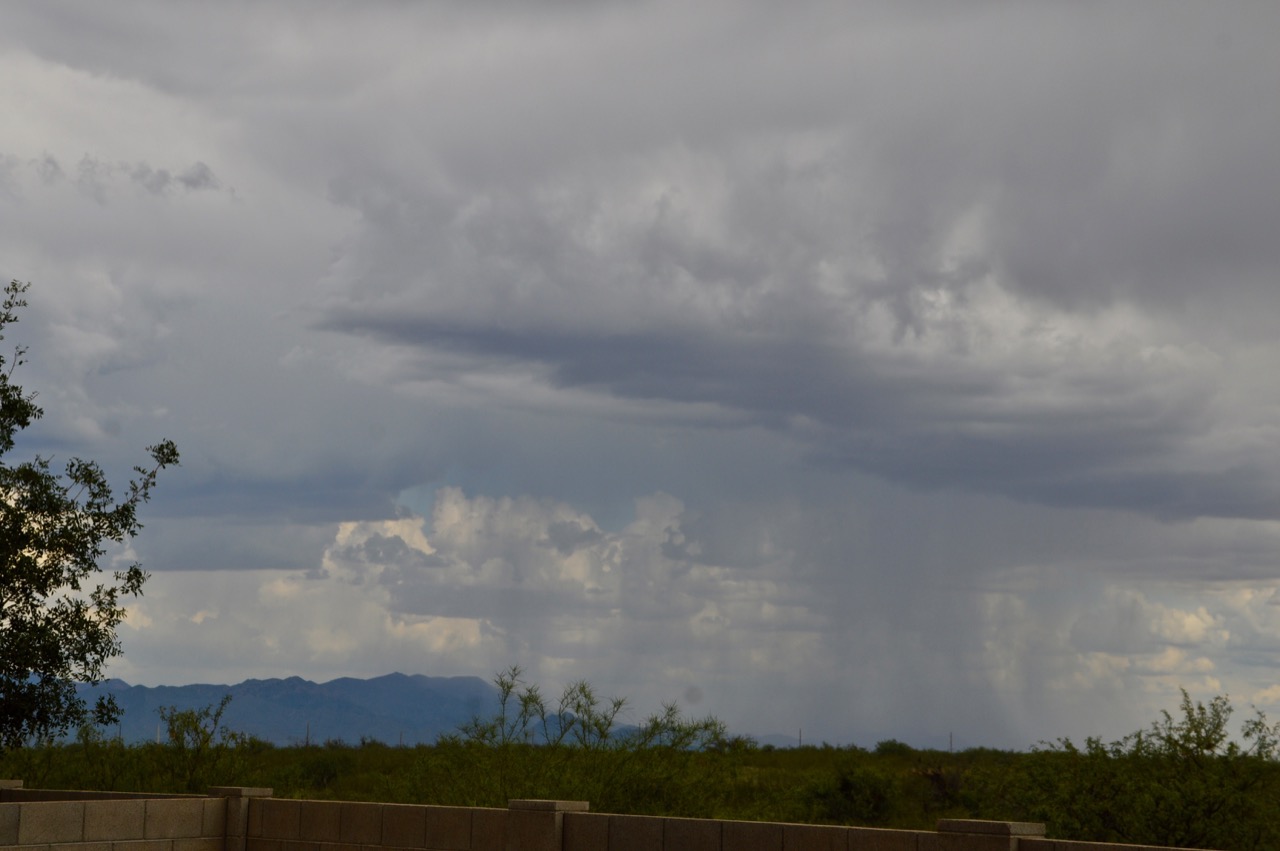 Since I had basically cancelled the day ... there is always time for a mid-day siesta. After all by noon I've already been up for 7 hours so why not. Maybe a short siesta would give me some ideas on where to go when I got up and the energy to finally do something.

It did ... Big5 Sporting Goods just a few miles away to check out some backpacking stuff ... but I'd rather to go REI in Tucson for that ... but not a surprise ... I don't feel like driving to Tucson today.  LOL When will the insanity end???

I was deep into my latest read, Going Back to Bisbee by Richard Shelton, when a loud roll of thunder woke up both hounds and made me flinch on the couch. As always I grabbed the camera and headed for the patio. 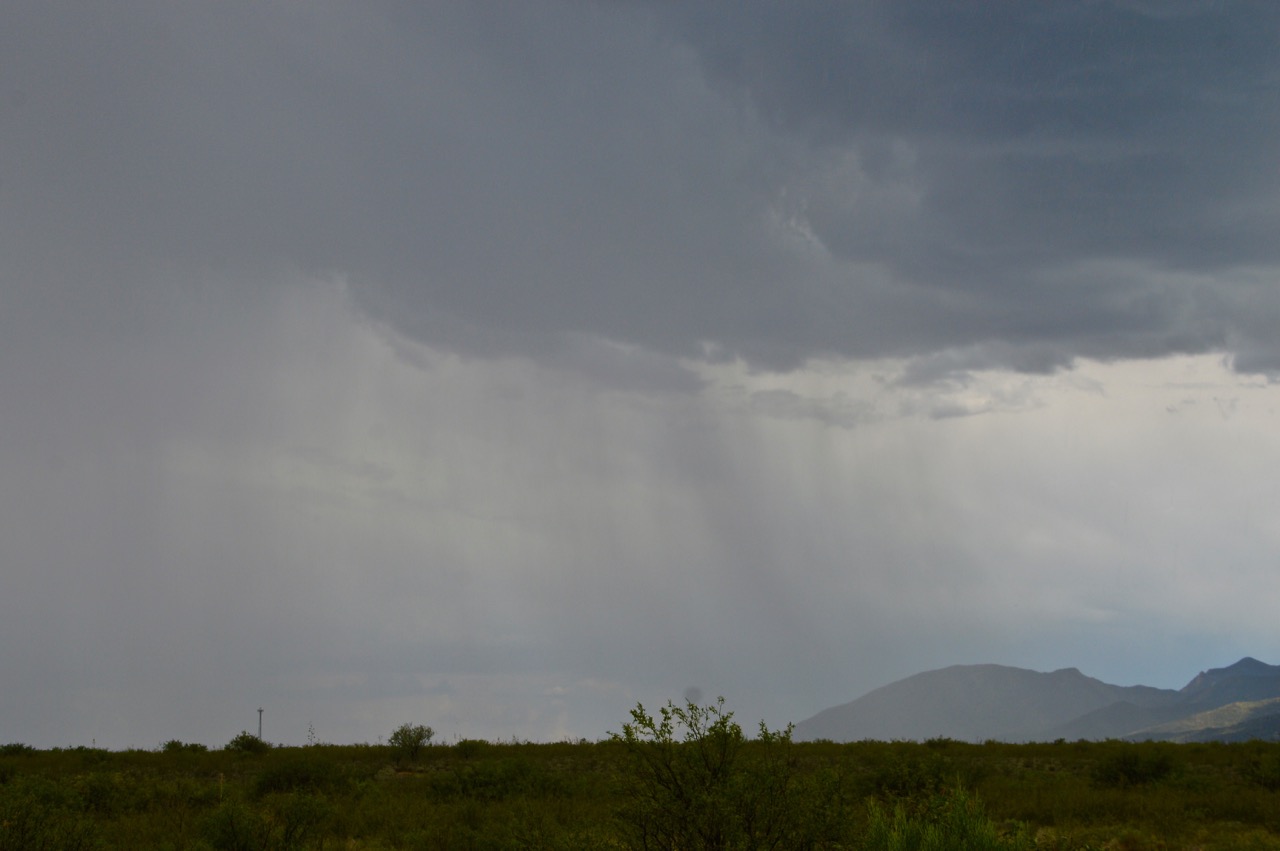 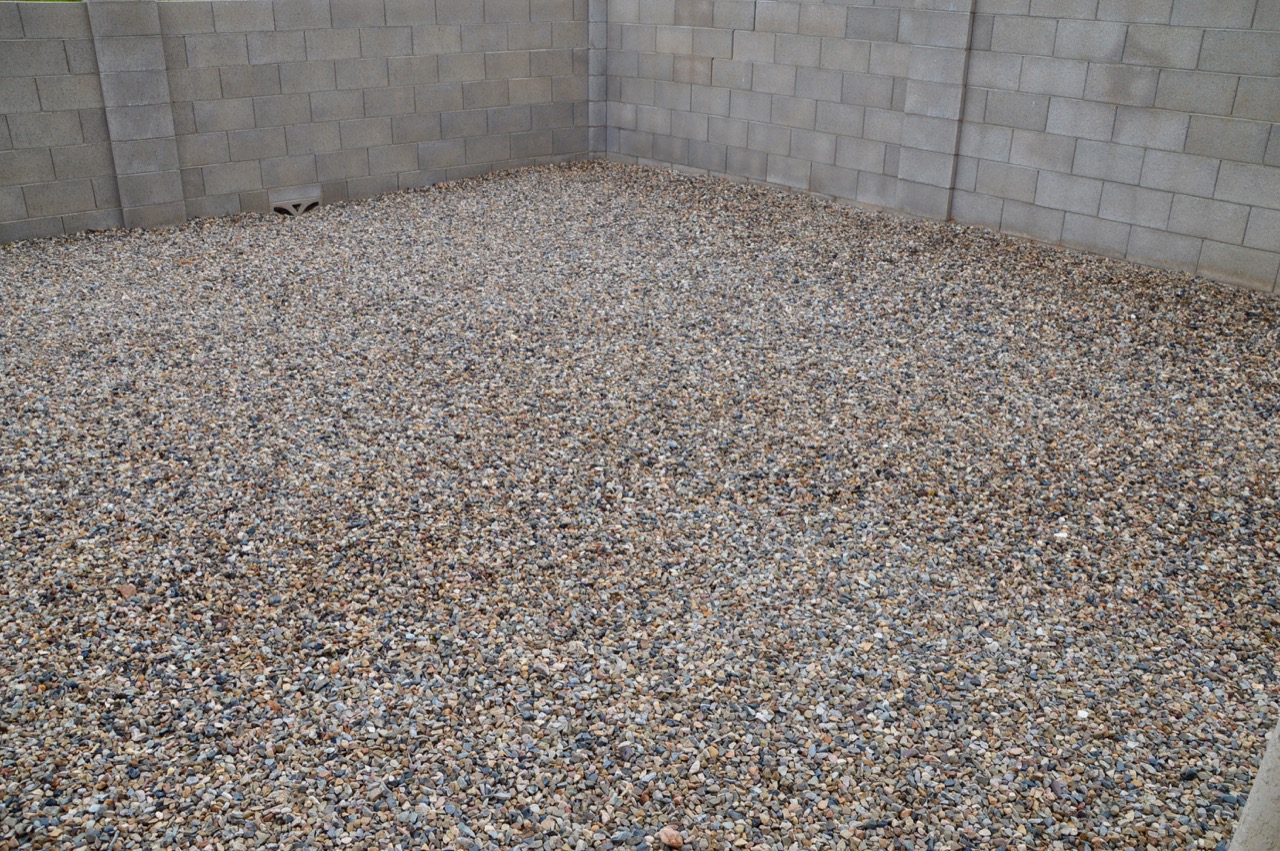 And you can barely see if you squint ... where it is raining in my backyard. A very strange rain pattern showing most of it dry ... can you see it? To the left only half of the yard was wet but the boundary was so light that the camera could not show the difference. 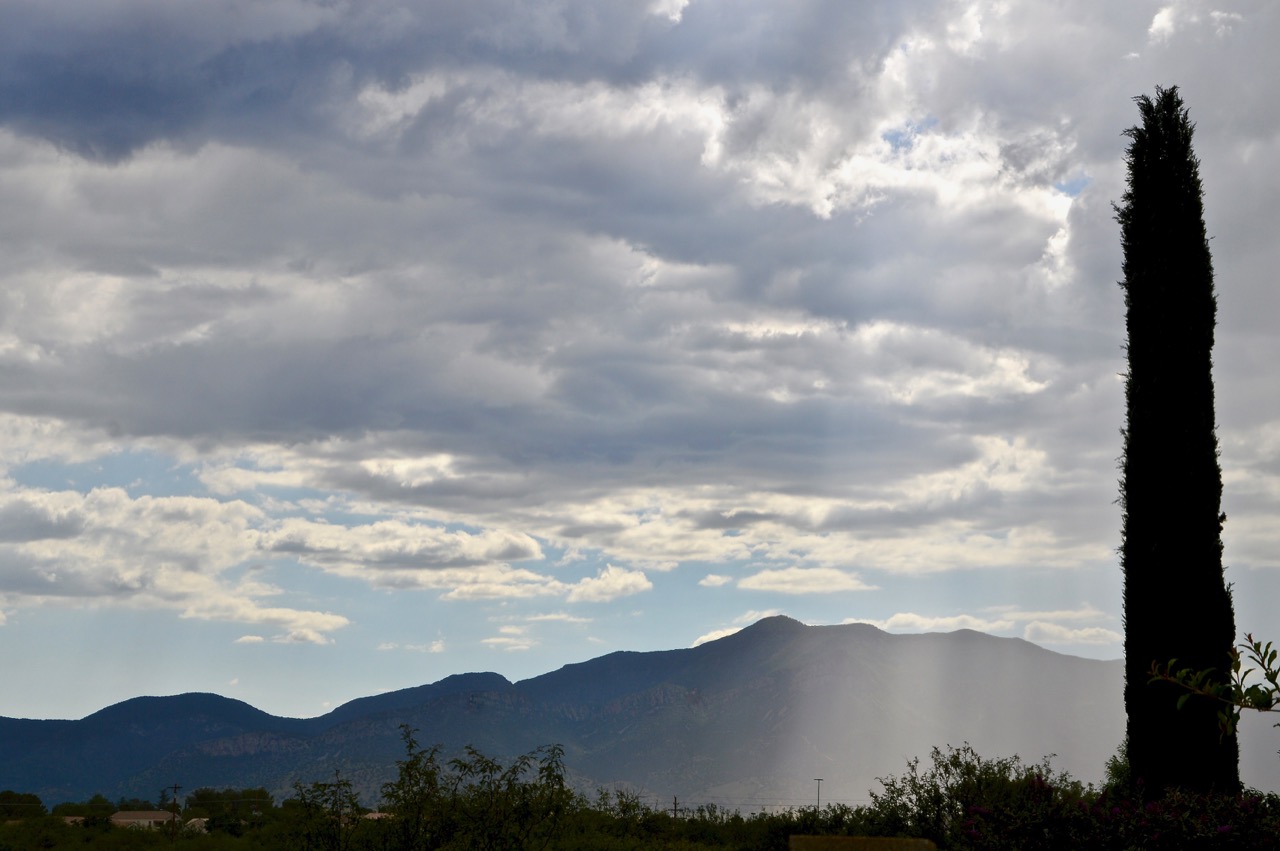 Even with the sound of rain drops, thunder and a strong scent of rain ... the sunshine was going to fight hard to break on through. 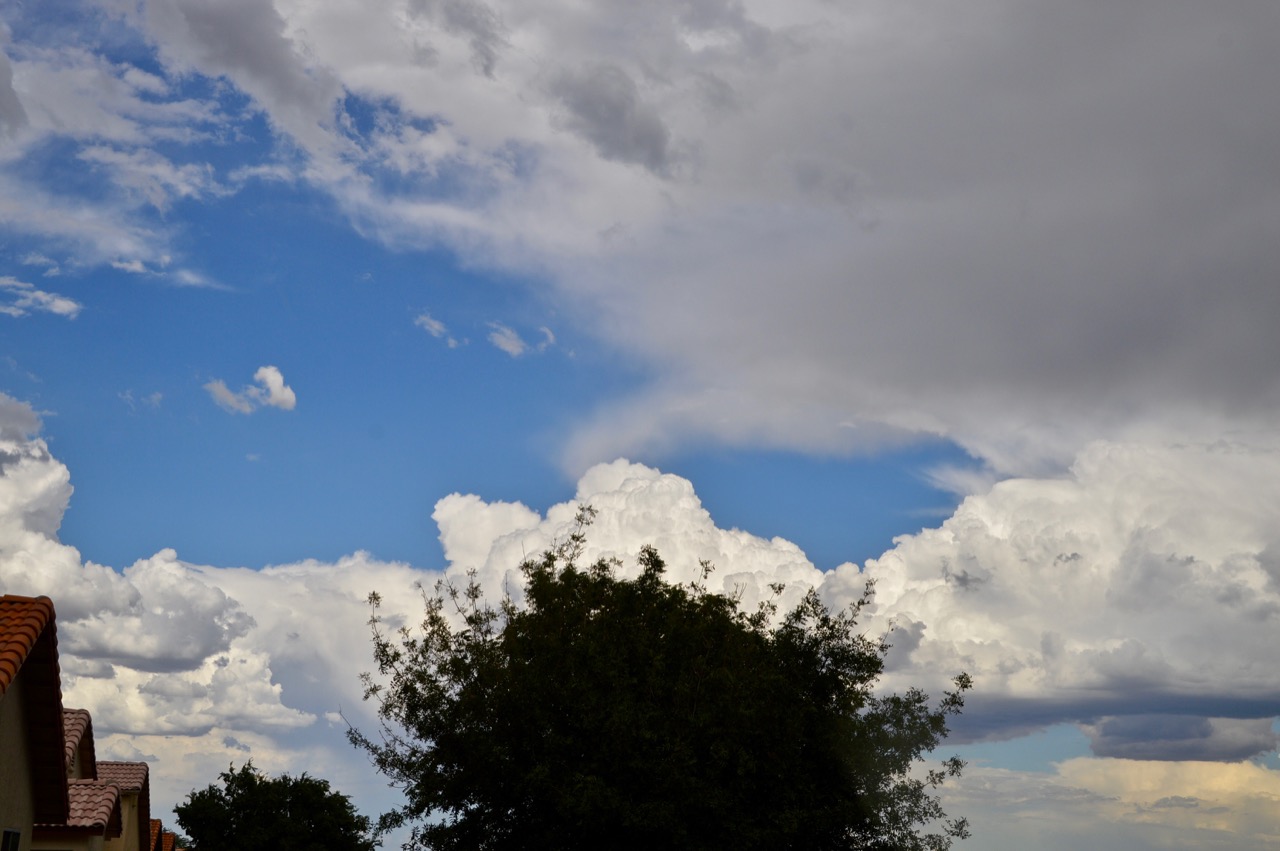 Looking to the left ... rain was only a rumor. 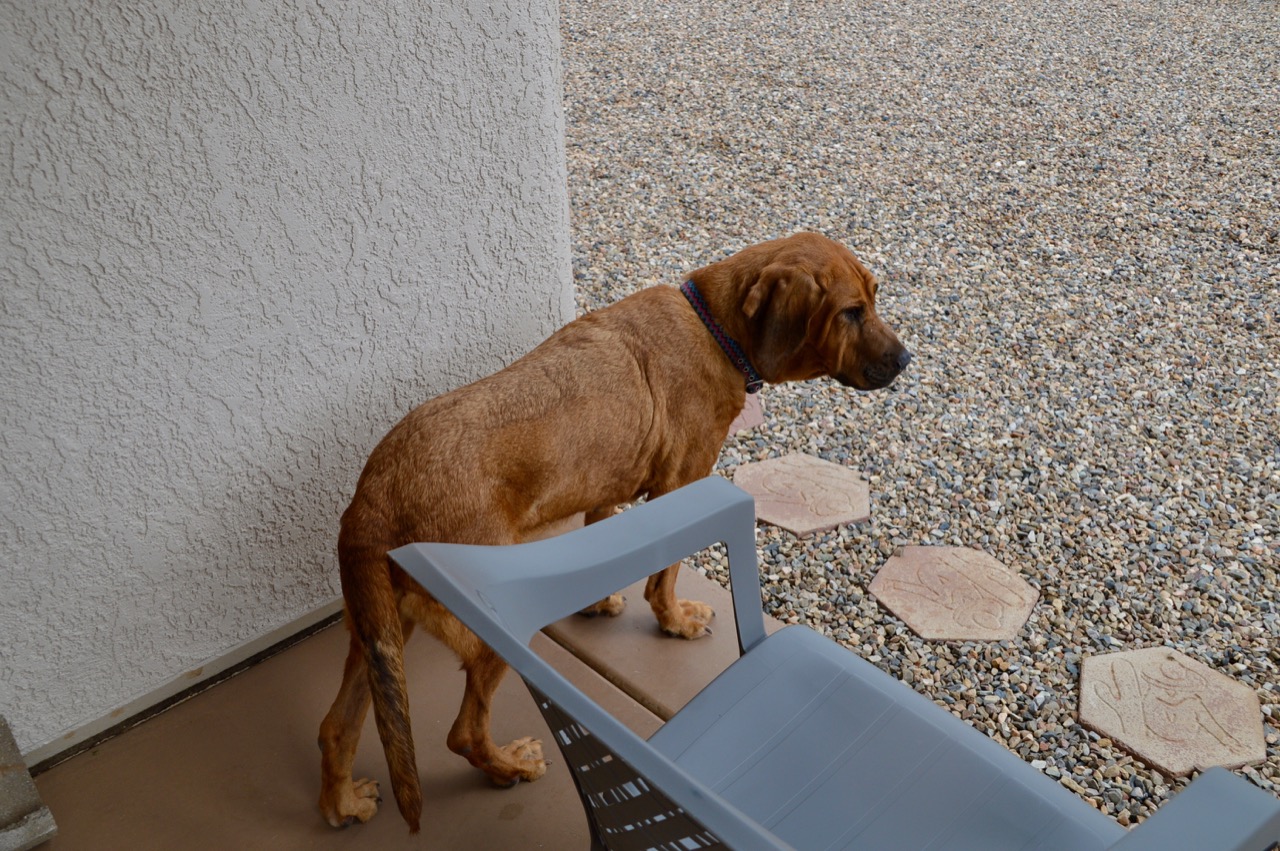 Stella was curious enough to come outside to see what was going on. She must have been really curious because when I left her she was under my computer desk sleeping and snoring lightly. 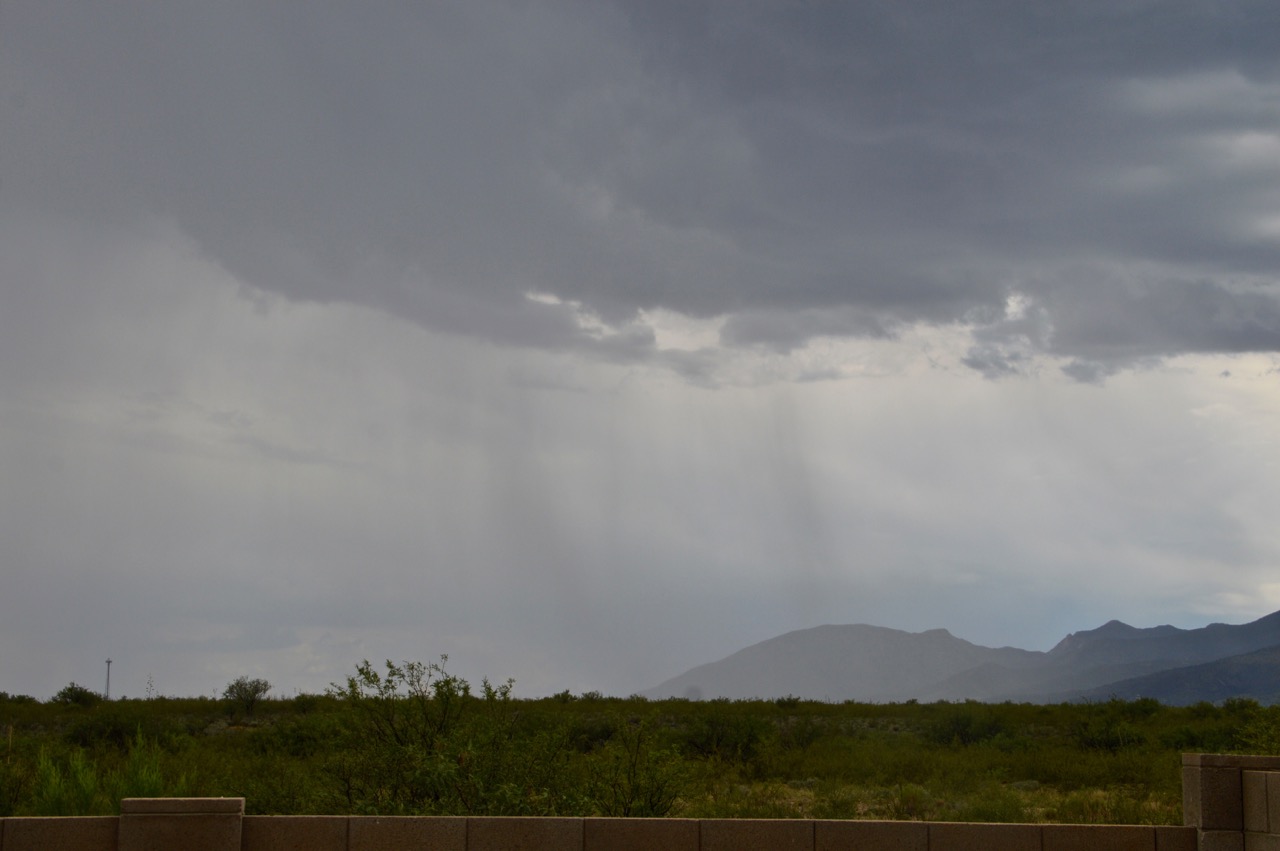 Actually over that ridge there are a lot of houses and a few businesses that I cannot see nor can I see any of their lights at night. 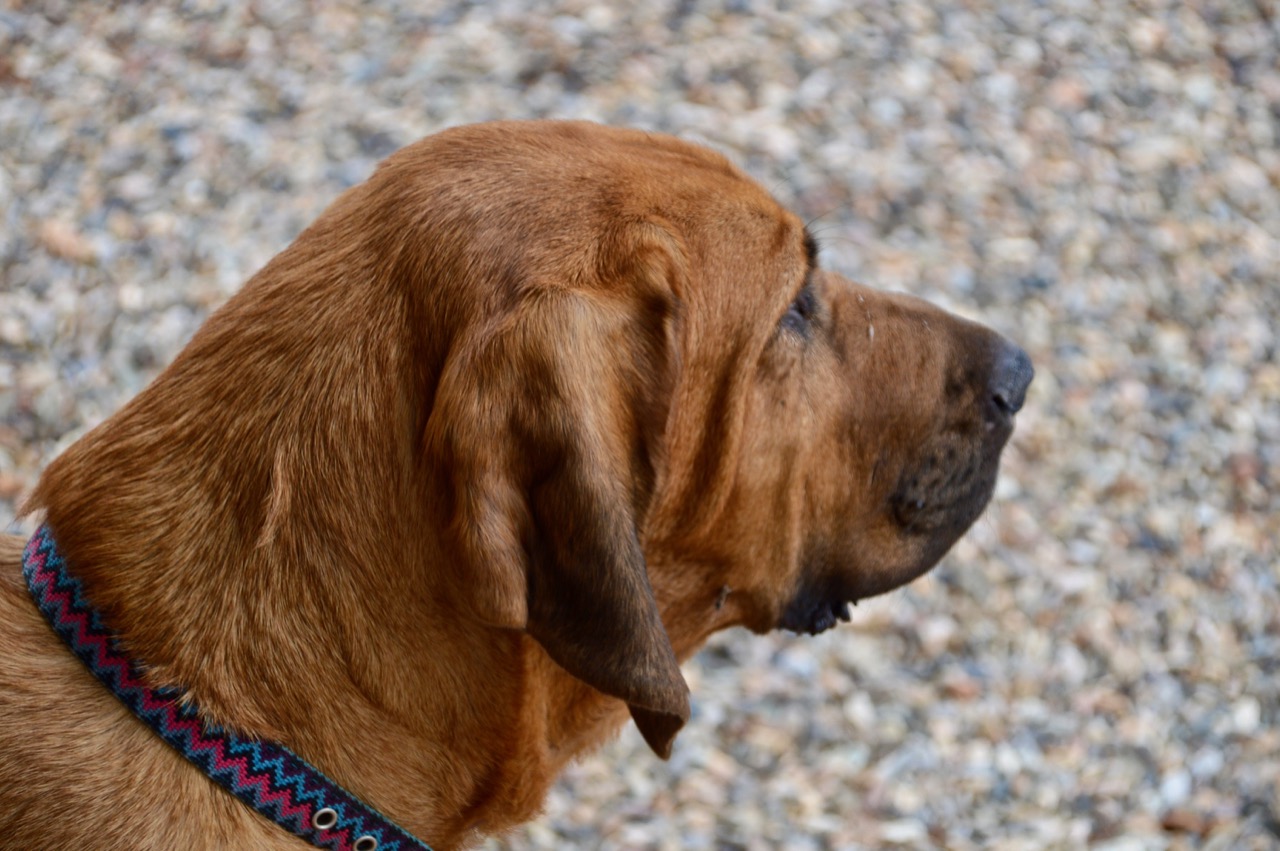 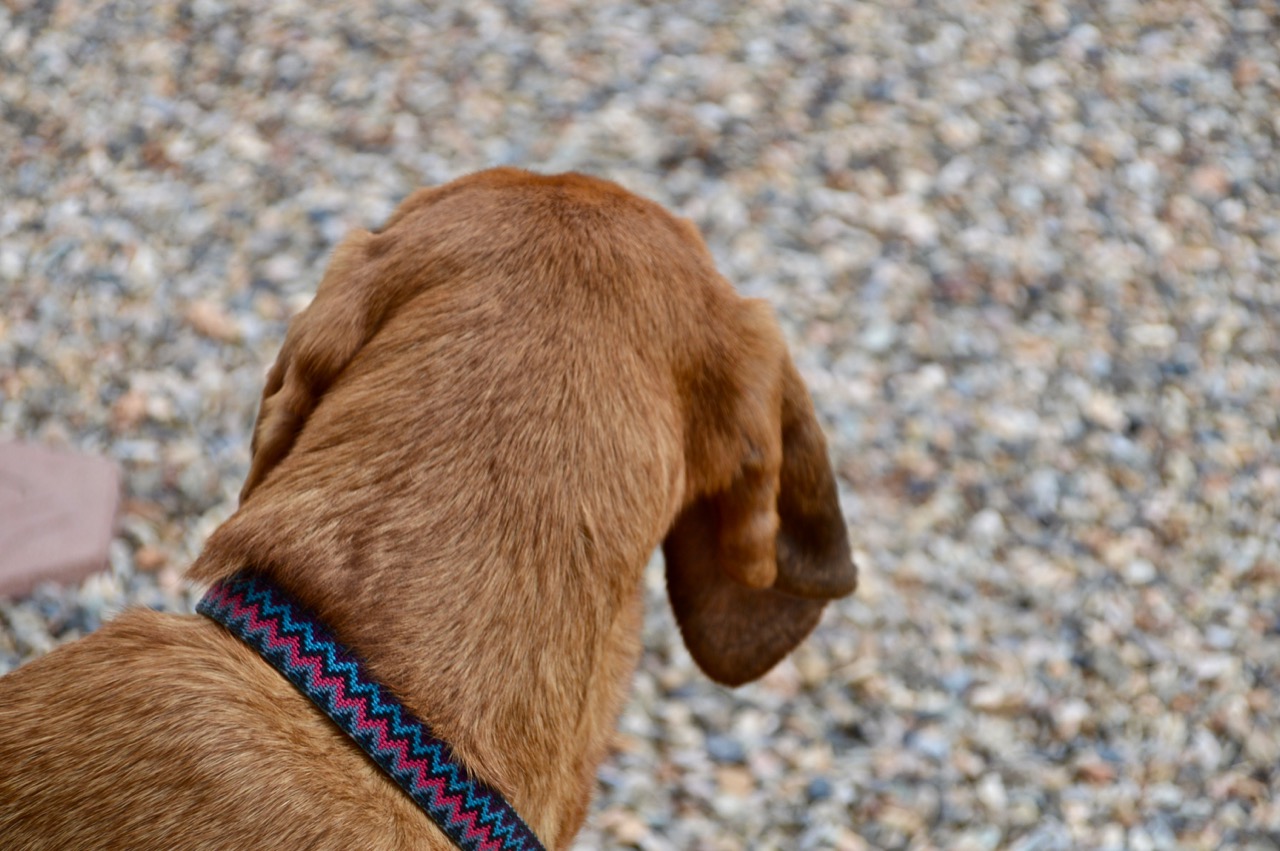 The old pug next door doesn't like storms. It's rare when I hear him bark but he was today with no one home yet. Stella is always concerned when she hears a dog nearby barking. That is quite a switch from living where we did but it's a very nice trade-off. Like I said recently, I did not realize how much noise that highway made until I was no longer living a 100' from it.

So a few barks from the neighborhood dogs is fine with me. Overall this place is extremely quiet and not as busy as I thought it would be.

My old friend that lives in Phoenix and is pretty knowledgeable about weather told me yesterday that this year's monsoon is the strangest of his 29 years living in Phoenix. He asked me what the dew point was where I was and it was at 51° He said normally it would have been above 65° during the monsoons. (He does NOT call it a season). He mentioned that I might be seeing the new norm of the driest monsoon of the year.

Others on a Facebook group that post photos of the local area are wondering the same thing ... where are the monsoons ??

Even with a lot of indecision it was a great day here in the Wild West.
at August 15, 2019