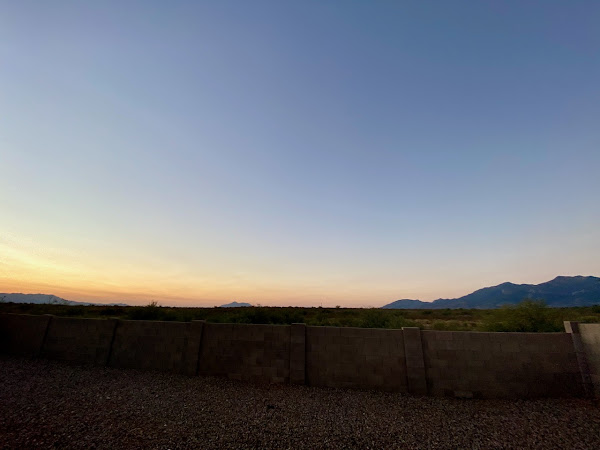 A little after 6am ... hounds and the dog fed, coffee tastes great and 63° sitting on the patio. I told myself yesterday that routines were going to change starting today and they did. I think I fixed the spark plug wire that was popping off the spark plug in my 1959 VW Single Cab. At least the 10 mile test drive proved so. I took the 1964 VW Panel Van to Tractor Supply to buy a bag of dog food to add to my own inventory. Both old VWs ran great. Yet, as you will see below, there was a surprise today ... Henry Henry Henry. 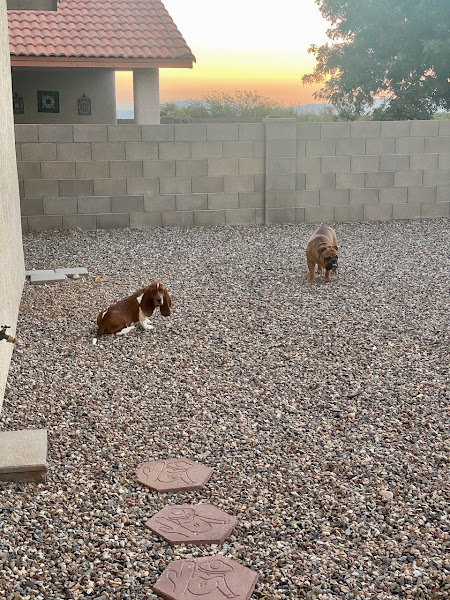 While I was doing the dishes early this morning I gave Henry a test and he had the free range of the backyard, trying to tempt him into digging over by those pavers. When I snuck around the corner with my camera ready to take a photo that would catch him in the act, this is what I saw. No digging, just following Walter around the yard sniffing the ground. 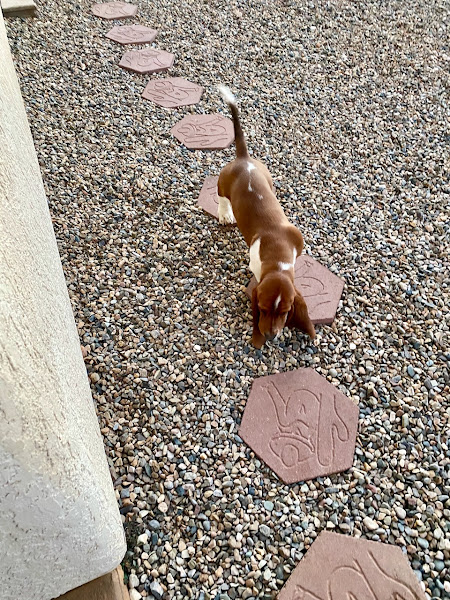 When I called his name he came running as usual. 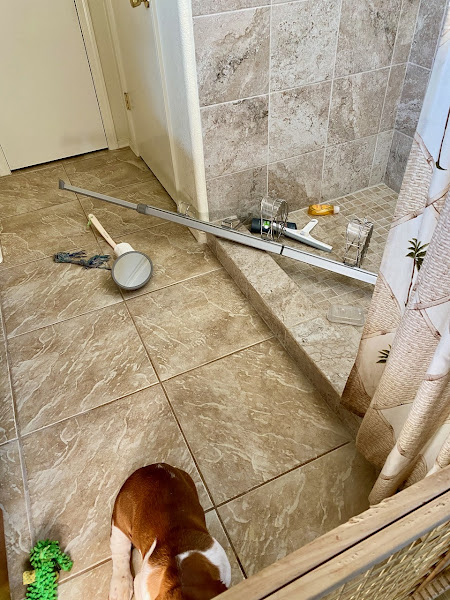 Isn't it great having a puppy again? They are always willing to surprise you while you are gone and very rarely do they duplicate the performance from the time before. It's always something new. This was an easy fix to install it back into the corner of the shower. No problems there.
You always like trying to giving the pups as much room as possible while you are gone and you would think this bathroom area would be so much better than a crate, just big enough for him to turn around. I guess not. He is a puppy after all and they are always exploring. Once they figure out they can climb on things or stand up against the wall, obviously nothing is safe. 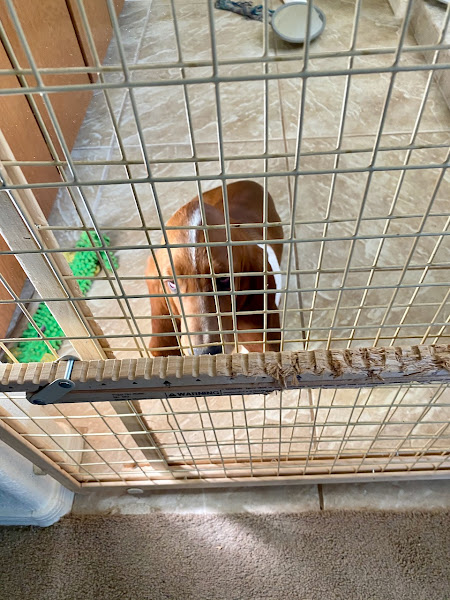 So I will have to consider a crate for him. He is getting bigger, stronger but nowhere near what he will be at one year old. That wood baby gate will not even be a challenge for him to break out of in the future. Although years ago back in 'the tropics' I had a bloodhound and two basset hounds in the computer room while at work all day ... only held back by this same type of gate. Never had a problem.
That chewing you see on the outside of the gate is from the time I had Henry confined in the bathroom with Walter running the house with Heidi and the patio door open for them. It looks like Walter spent most of the time that I was gone that day grocery shopping, trying to break Henry out of  'jail'. Walter is also big and strong enough now to pull with his teeth, the edge of his metal crate, and bend that thick wire back toward him. Thank god for those small Binks padlocks I use as a backup. 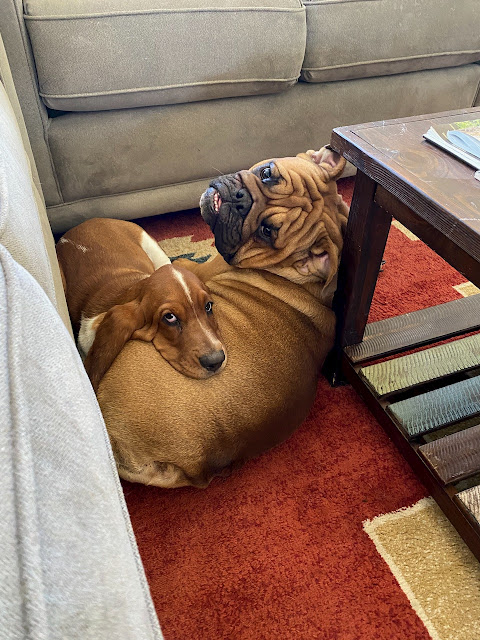 Moving from room to room, the hounds always found a new place to sleep. Heidi never moved from her dog bed back in the bedroom. She had air conditioning on and the blinds pulled. Perfect sleeping weather for her. For the first time this year I watched a little NFL football but didn't last more than halftime. I did keep track of the Colts game later on ESPN Gamecast on the computer. 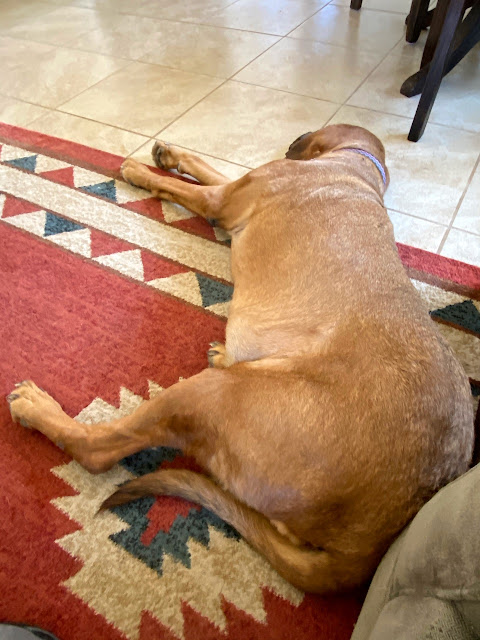 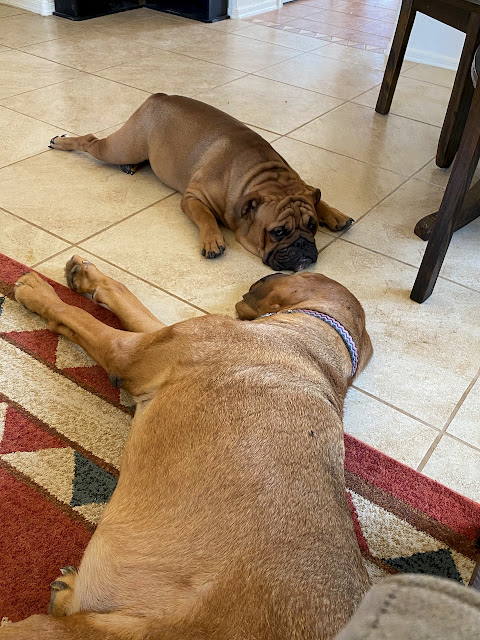 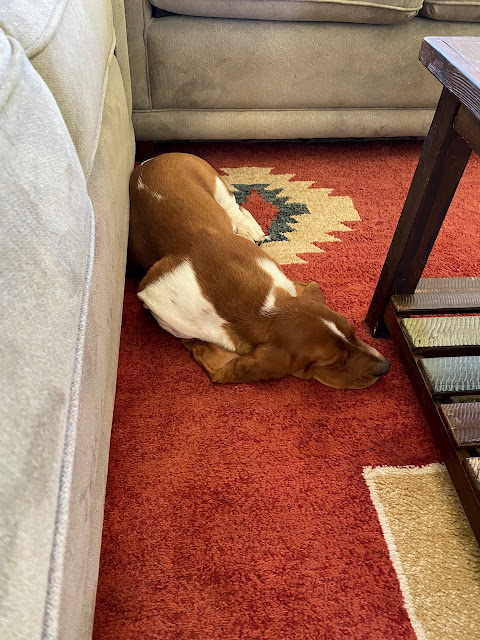 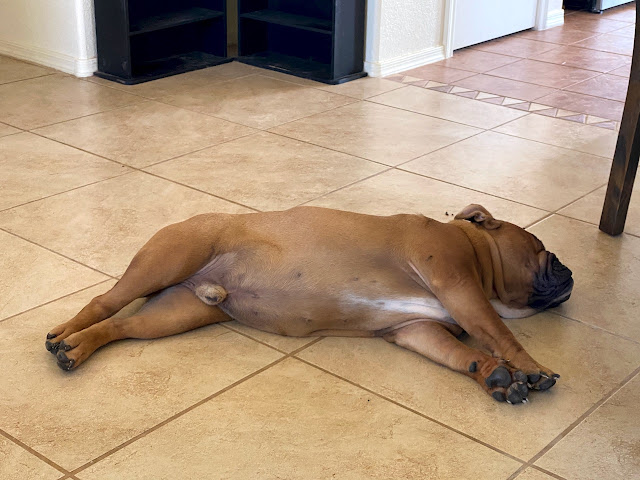 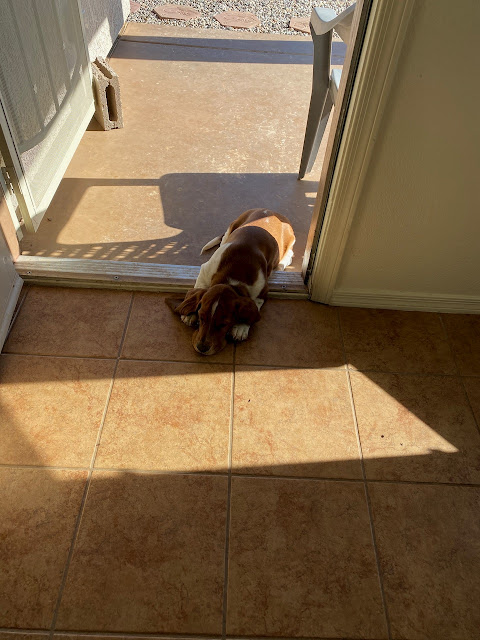 Henry reminded me it was after 3pm and it was time to head outside to check out some late afternoon sunshine. With 93°, clear skies it was the perfect time to sit facing the sun with a cold Cerveza del Pacifico. Getting some natural Vitamin D would continue to keep the China Virus cells away from me. Of course all the hounds and the dog followed me from the air conditioned house to the heat outside. 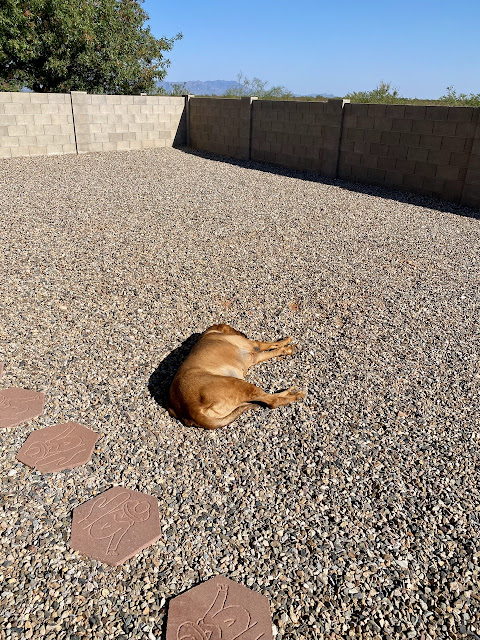 Stella was like a puppy this morning on her walk. He hopped a times, trotted to catch up other times, sniffed a lot of scent and by the time we were almost home, she was slowly walking with her tongue dragging the ground. Those hot rocks are probably feeling great on her back and hips. 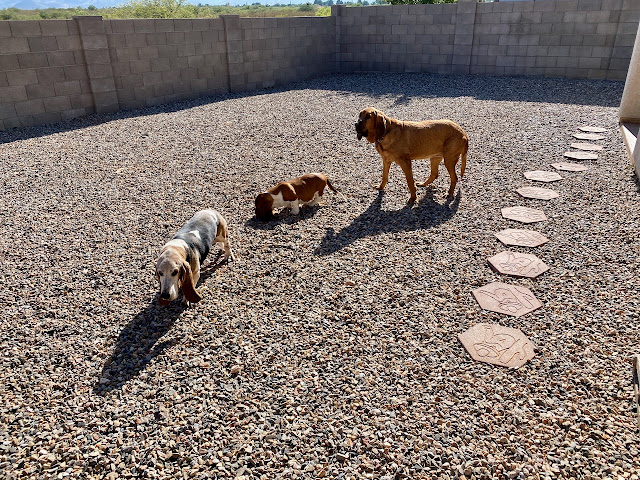 You would think with all the exploring they do that snakes or spiders have to had infiltrated the yard when we are inside. They are hounds with hound noses so it's not a surprise. 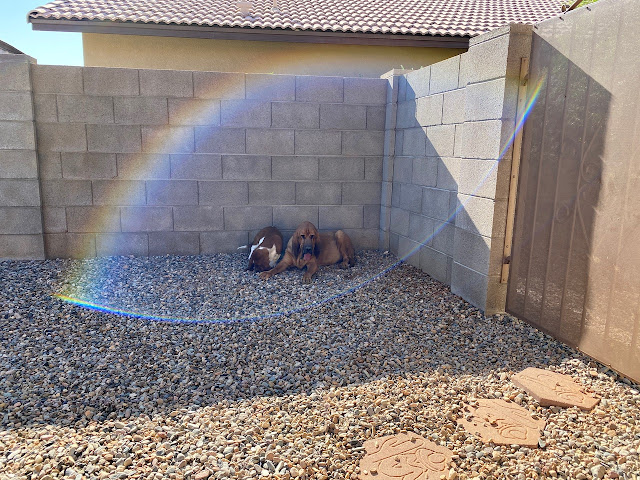 Looking directly into the sun I could not see what I was taking a picture of ... I thought the reflection was pretty cool. Nothing but iPhone photos today. 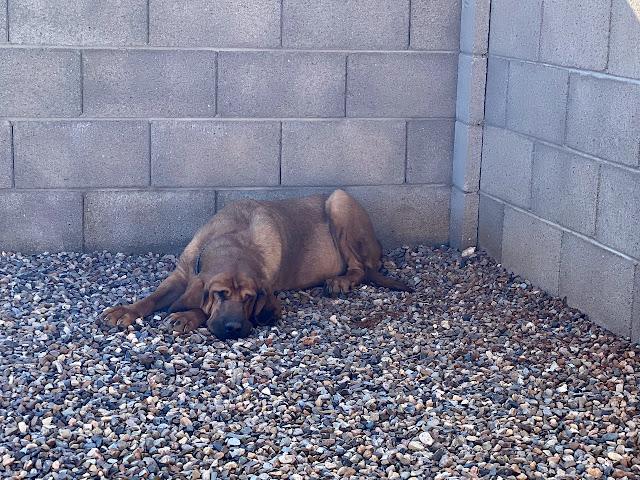 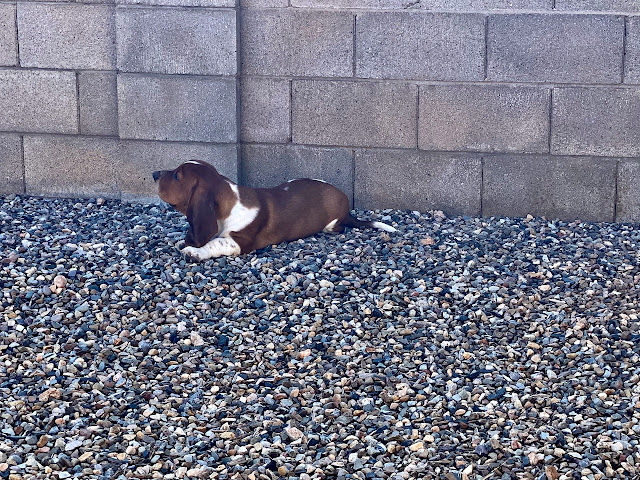 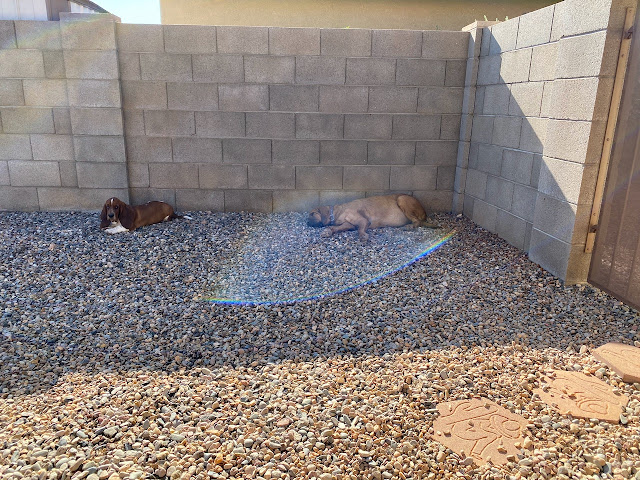 Later the neighbor's son came out to pick peppers just on the other side of that wall. He gave me another handful to fill the open jar I have inside to dry them out. It wasn't long we moved our conversation from guns to politics. I stood in the shade and listened while the hounds continued to lay in the shade. All the places to vote in this town are at churches. I was hoping I could go to the fire station just two blocks away to vote.
Henry will be going in for his shots this week. I have to make an appointment. The breeder had a little different schedule for his shots than normal. She said if the vet didn't want to follow the schedule to drive him over to her and she would give him the shots. Basically the shots are spread out over the next five weeks with two weeks in between them. Minimal vaccinations are desired with this schedule.
I thought back to the time I was sitting in the sun. It is amazing what 15 minutes can do with bright hot sunshine at high elevation. I am thinking tonight will be movie night again, one pulled from my dvd shelf. Last Sunday when I tried that I was tired and in bed before 8pm. Walter waking me and all the hounds up around 4am every day justifies I guess going to bed that early.
Time for some ice water while the hounds and the dog continue to sleep here in the Wild West.
at October 04, 2020