Walter Turns Down A Walk What dog doesn't like to take a walk? It was going to be Walter's first official walk with the retractable leash, with none of the hounds going with us. I needed to take Henry's stool sample over to the vet which is close enough for us to walk to. Walter never left the porch. I unclipped the leash and walked back to the side walk, telling him to come on. He turned and started sniffing the bottom of the front door to see if he could get inside. 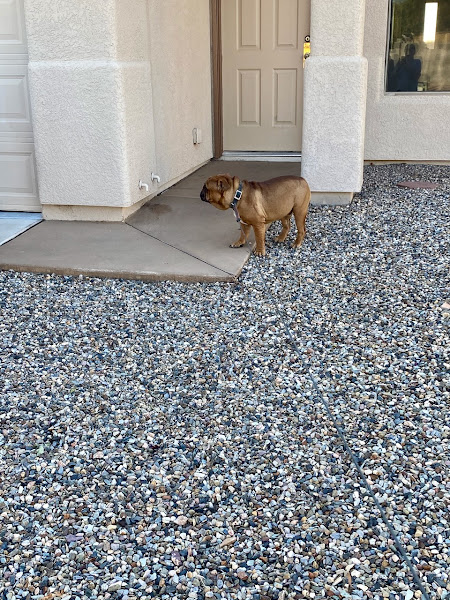 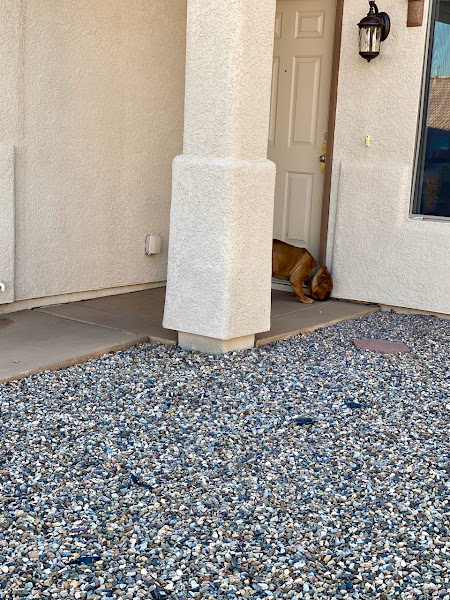 I read about bulldogs before buying one and it did say they are not interested in taking walks that all they liked to do was just hang out, relax, sleep, snore, eat food and hang out some more. It will be interesting to see what he does in the future. 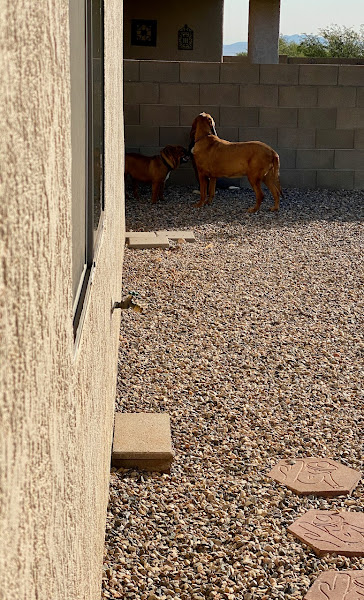 I decided to drive over to drop off the sample. I thought I might get some drive-thru breakfast while I was gone but changed my mind after I left. I left all the hounds and the dog outside in the backyard and wasn't gone more than 15 minutes. As I quietly snuck on the patio I could hear Stella whining but what about the others?
Walter was panting heavy because I was gone. That is become a pretty consistent act as I get ready to leave the house anymore. It looks like Henry was trying to climb the fence so no doubt he new friend the doberman was looking over the fence sometime. 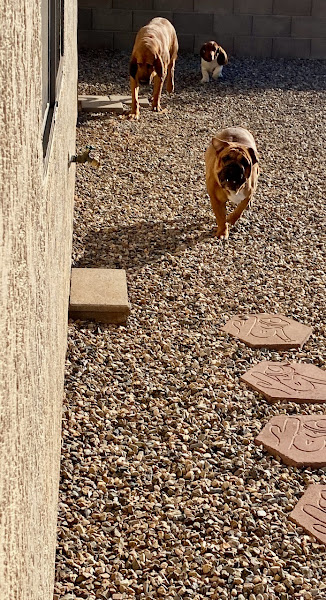 Once I said "hey" they all came running, happy that I was home. The ran right past me into the house not even stopping to say hi. Heidi was behind me sleeping in the shade next to the fence. 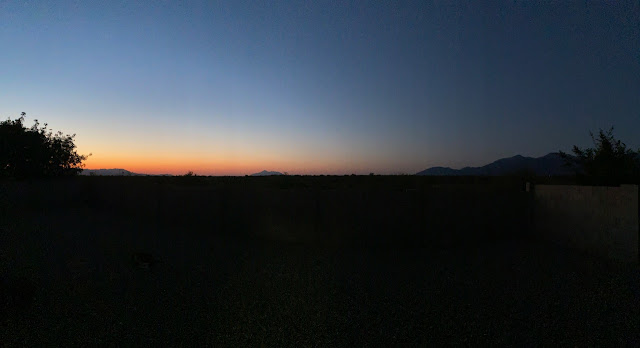 This was my first attempt at taking a 'panoramic' photo with my iPhone this morning. 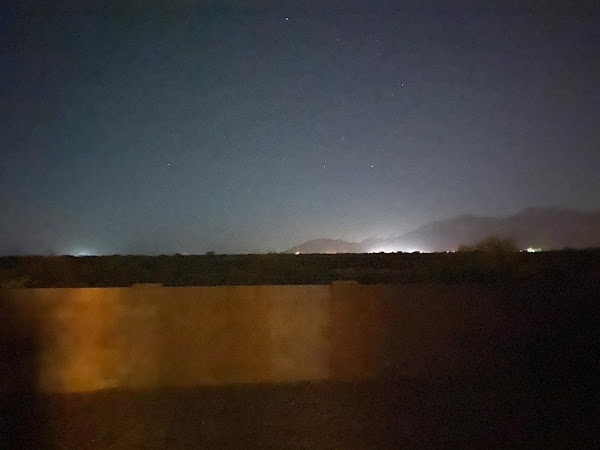 Last night as I stood on the patio I noticed lights moving up along the mountain straight ahead in the photo. If I had a camera that could take the same picture I was seeing through my binoculars  it would have been fantastic ... but this was the best I could do. That light in the center of the photo at the base of the mountain and on top of the ridge behind the house ... was multiple heavy machinery moving up and down that mountain area. No doubt it was the crew building the new wall while replacing the old wall at the border.
They have been working nights since last spring moving from east to west while another crew on the west side of the Huachuca's and the other side of Montezuma Pass are installing new wall from west to east. The Facebook page for the Coronado NF has some good photos of the progress. 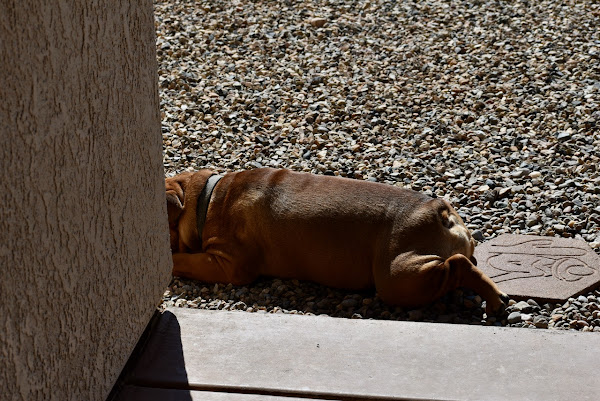 The sun is almost perfect around 10am, maybe just a tad too hot, but the hounds and the dog loved feeling the heat as they laid outside in the backyard. I was wasting time as usual inside the house. 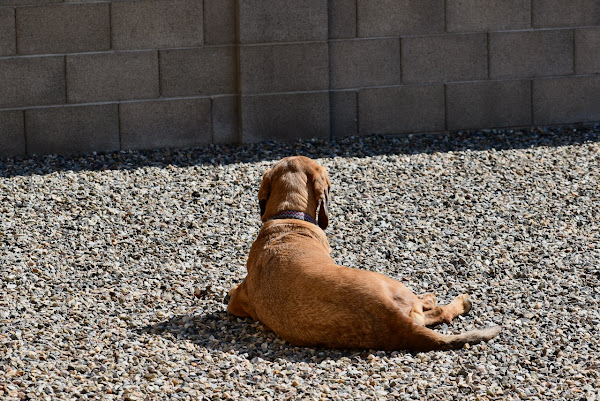 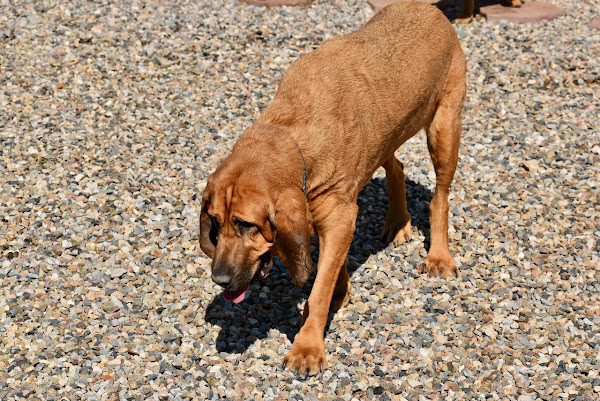 It wasn't more than 10 minutes when I was outside Stella decided it was too hot for her. She finds the dark cool computer room a much better place to spend most of her day sleeping. It's quiet back there while the puppies sleep in the tiled hallway. 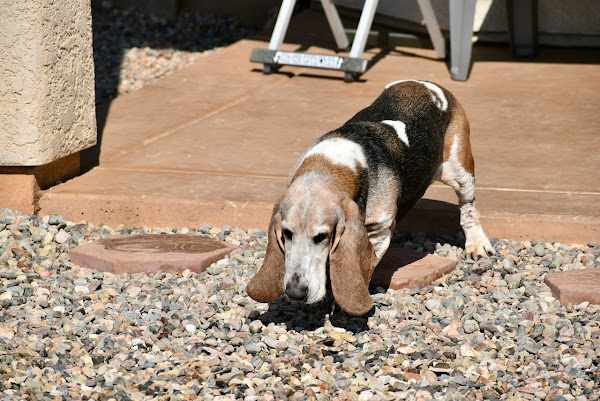 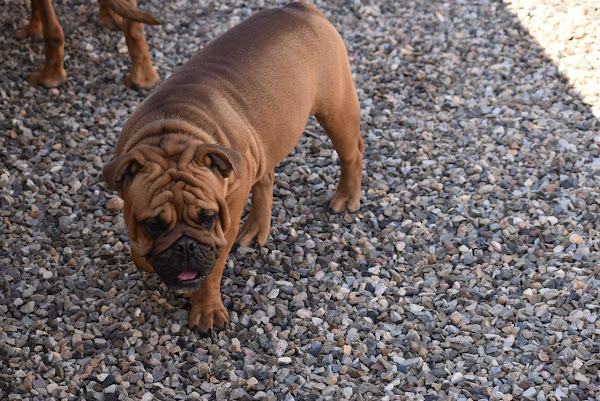 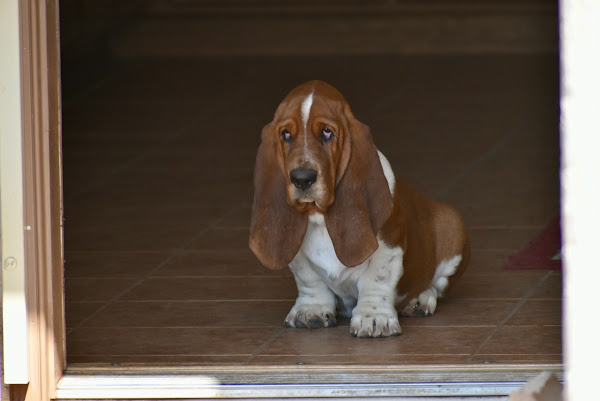 Henry has learned pretty early in his residence when it is the best time to be laying outside and at 10am is not one of them in his book. With those large feet, he is really going to be a big basset hound.
I didn't get much done this afternoon. Tried some Paul Newman frozen pizza for the first time to see how that works with my digestive system. Walked around the yard with the hounds and the dog mumbling to myself on if I watch the debate tonight. Then followed that up with a nice long phone call with my old friend from college. It's good to know that I am not insane, at least in the eyes of him and his wife.
So ... a semi-finished post. I wish I had a cigar to smoke on the patio right now with a small shot of whiskey. Ice water will have to suffice as I sit and think about the great view and great town that I live in. (Not bragging just thankful).
Things are good in the "Wild West".
at October 07, 2020

Email ThisBlogThis!Share to TwitterShare to FacebookShare to Pinterest
Labels: Bulldogs Don't Do Walks, The Wall