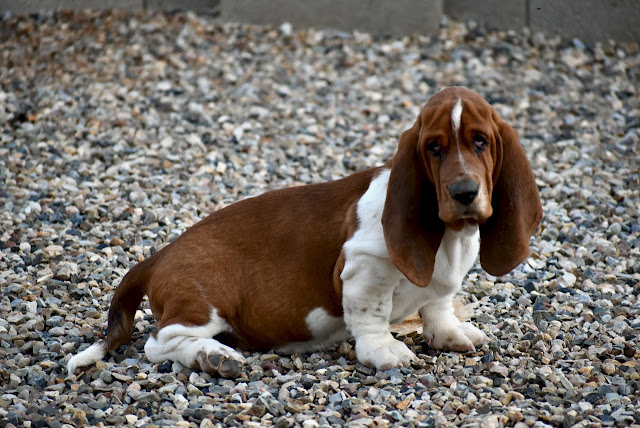 It took 12 minutes before I could write my first word on this blog post tonight. I was so mad I could have thrown Blogger through my computer if that were possible. In fact I am trying something entirely different putting this blog together tonight ... I am writing everything out and then TRY to insert the photos HOPEFULLY in the paragraphs I want. The problem is (1) Blogger froze after 5 minutes while trying to load photos into the post. (2) Blogger froze another 5 minutes while I tried a different way to work with my photos in their system. (3) Blogger froze again as I tried pulling the photos that were uploaded into their Blogger Library ... so I am trying this along with a different browser. 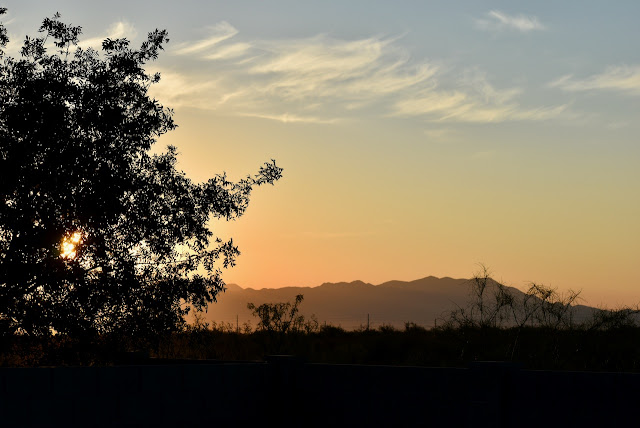 Wordpress is looking better all the time ... and I have nothing to do tonight so who knows where I will be blogging from tomorrow. (I just did the same exact post here on Wordpress. I loaded images as I typed. It took me 35 minutes on Wordpress. Same photos, same content. ... on Blogger 65 minutes)

Henry met a lot of new dogs and a lot of new people today. He wore his collar for the second time and used a leash for the first time ever. We didn't go to the dog park nor did we go to any playground. Henry made his first trip to his new vet, the one I use for his shots, exam and introduction. It always seems to take a long time for such a short appointment but it was a success. 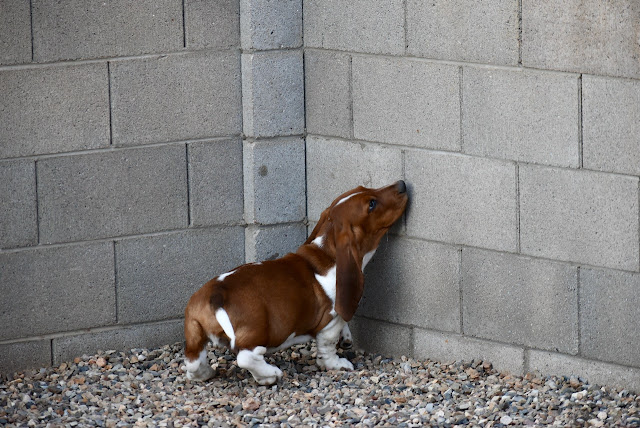 Just like always Walter is semi-crying at 4am and goes to every hound to wake them up as he presses his nose (whole face) into them to wake them up. That leads me to turn on the bedroom light mumbling to myself, then the hallway light as I walk to miss and not trip over the two puppies battling for the first position. All four go outside to pee while Henry ads a poop to his trip. Just like that they all  know we go back to sleep for an hour before Walter starts talking the way bulldogs do, letting me know it is time to be served breakfast. Stella no longer has to say a word about it.

While they eat I make coffee ... strong coffee ... that some would call 'mud' ... but it gets the pulse rate going and the heart working. 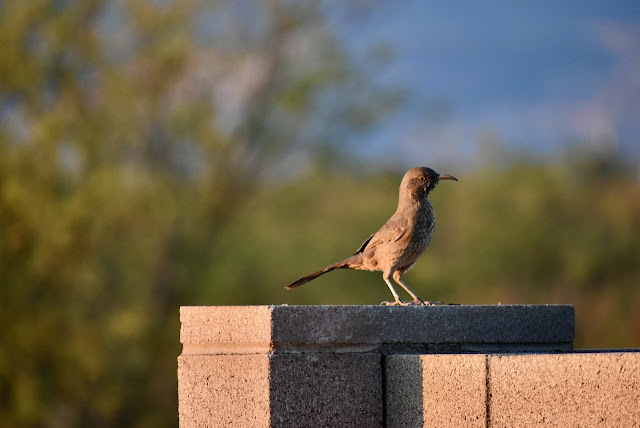 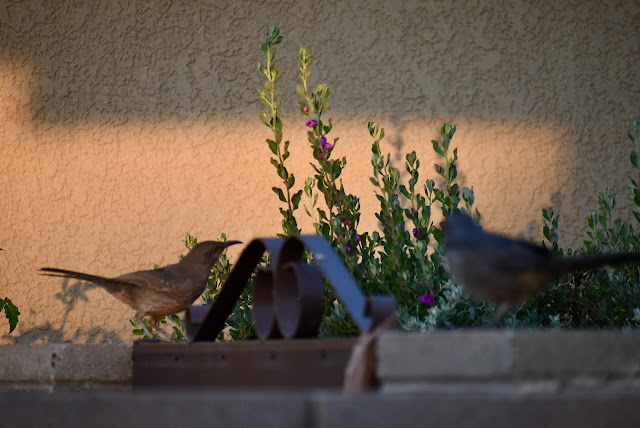 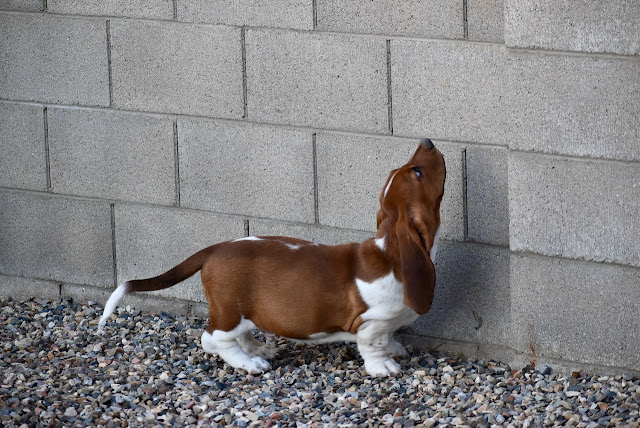 It wasn't long after sunrise when the birds decided they would torment the dog and the hounds. Henry was certain he could climb the fence to reach them and when that did not work, he stood and stared. They flew in formation a couple of times across the yard a little higher than the fence. 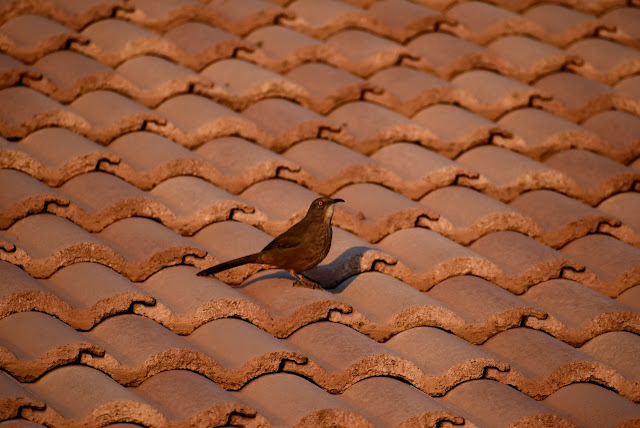 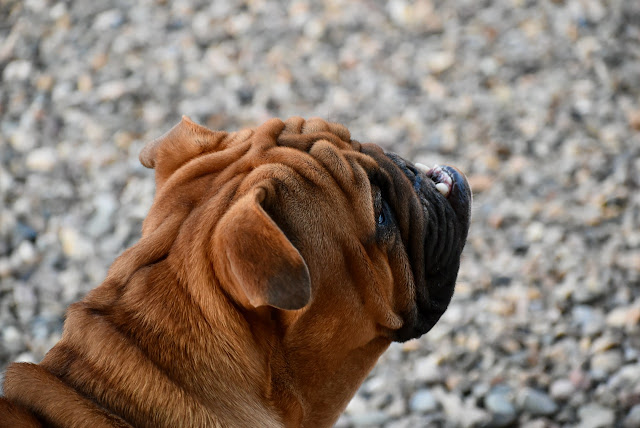 Landing on the neighbor's roof, gave Walter the angle he needed to see them. I forget that he is also a puppy and not familiar with things that can fly through the air. Of course he has no chance of catching them but it does but a crimp in my idea of buying a bird bath.

I spent most of the morning trying to get a vet appointment. My vet is so popular that it's hard to get an appointment as they are booked solid a month out. My only chance is to call every day at 9am to see if there is an opening. I got one at 9am for this afternoon. Funny that she is sitting at the computer but can't schedule my appointments for Henry in three weeks and then two weeks after that for the rest of the shots ... but she can do that ONLY when I am there this afternoon. 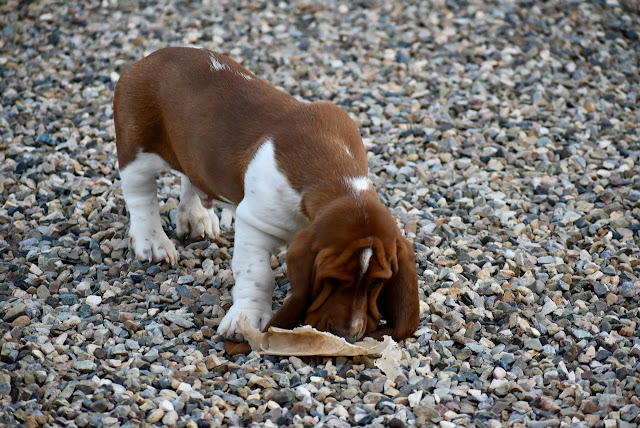 Has the world gone crazy or am I just having a hard time with life in general? At least they had a big sign on each door "Masks are Optional as of September 26th" ... mine was back in the truck. Our mayor called off the mask requirement weeks ago. 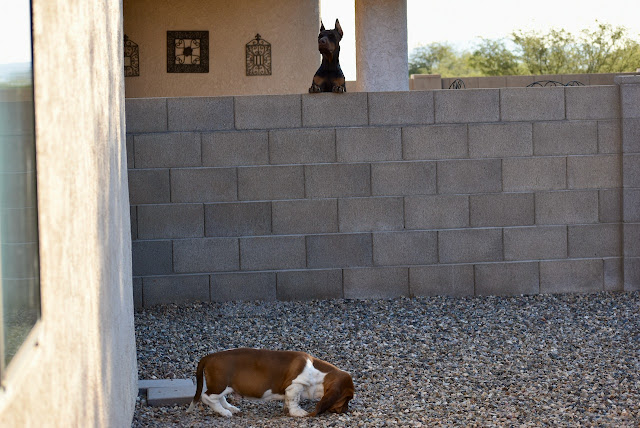 While I wrote in my personal journal which is nothing more than a blog with a private setting, Henry had free roaming rights to the backyard. I knew it would be likely I would catch him either digging or had just finished. Notice he is so focused digging in his favorite spot he did not notice the neighbor doberman standing there. 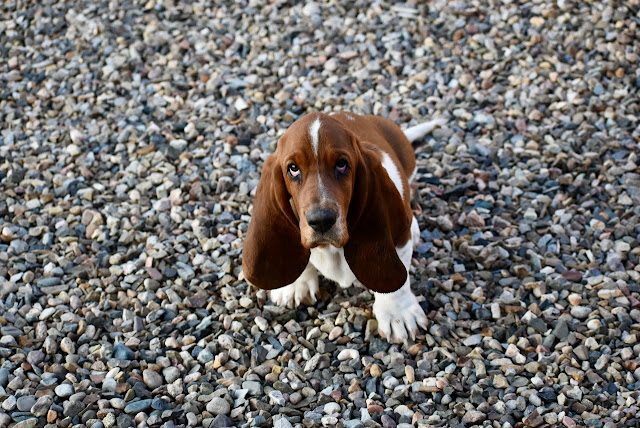 Around 2pm it was time to prepare Henry for his vet visit. While he sat and looked at me, he saw that I had adjusted the collar so it would fit. He didn't put up a fight and followed me back into the house when I put it on. The problem came when I pulled the 6' leash out of the coat closet.

Stella got excited because she thought she was walking to the mailbox because that is the leash we use, not the retractable. When Heidi saw Stella get excited she started barking because she thought she, Stella and I were going for a walk. That confused Henry because he had not heard Heidi bark before. Walter starting panting and making bulldog noises not because he thought he was going to walk but that we were leaving him. Yes, he is starting to show signs of separation anxiety at 8 months old.

About all I could do is clip the leash on Walter's collar and head outside. Unbelievably he started to follow me, dragging the leash behind him while having some of it in his mouth as he walked. I left everyone alone outside while they figured out what might be going on. The good news in all of this excitement is, when it came time for Stella and Walter to go into their separate crates, for the 5th straight time Walter walked in his on his own ... trotted actually. Stella always walks into hers with no problem. 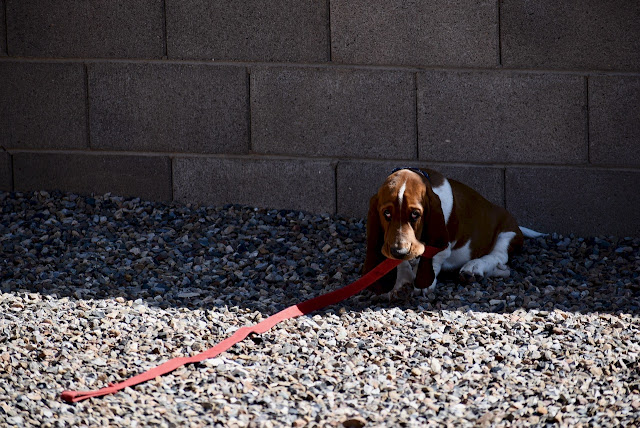 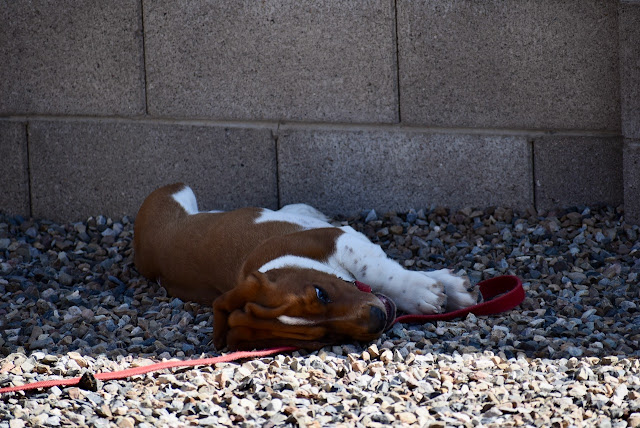 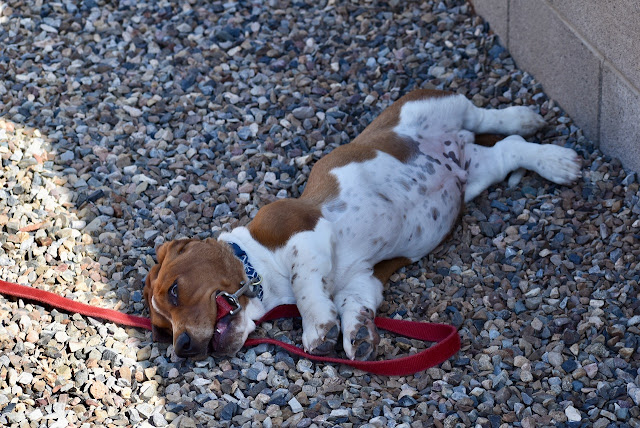 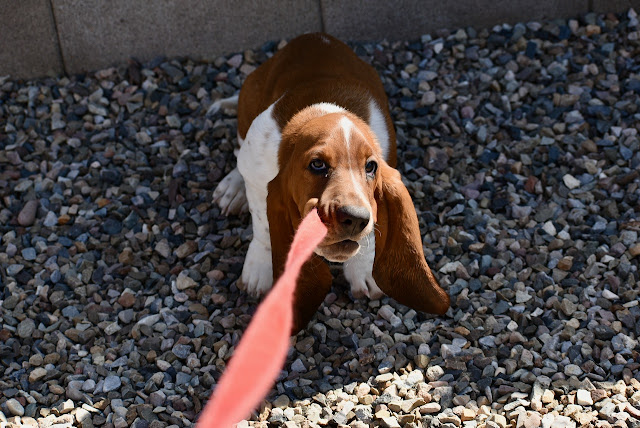 Backing up you can see that Henry found leash training to be a little boring. He can learn while laying down I guess. It was so long ago I really can't remember what Winston was like as a puppy but looking through photos of my past basset hound puppies, they are all about the same when it comes to their puppy personalities.

Everybody at the vet loved Henry and of course he had to touch noses with every dog, big or small, young or old, barking or growling. Cat cages were also sniffed and I couldn't stop him before asking the owner. They were too busy wanting to touch his ears to notice if their cats/kittens were upset.

Henry did very well on the leash, very well at the vet with different dogs and different people. That wore him out so he is sleeping through this blog post. 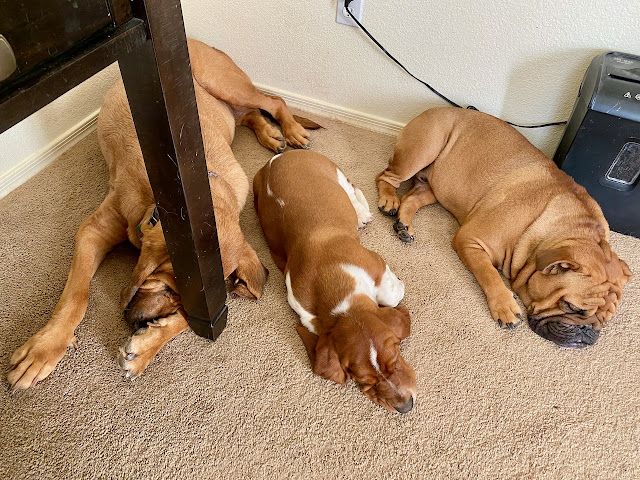 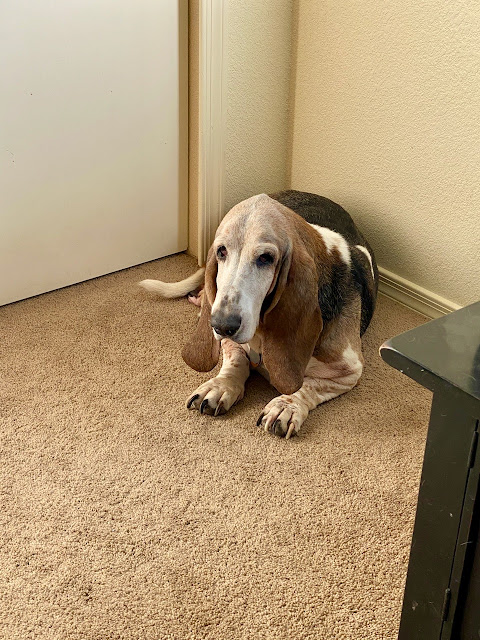 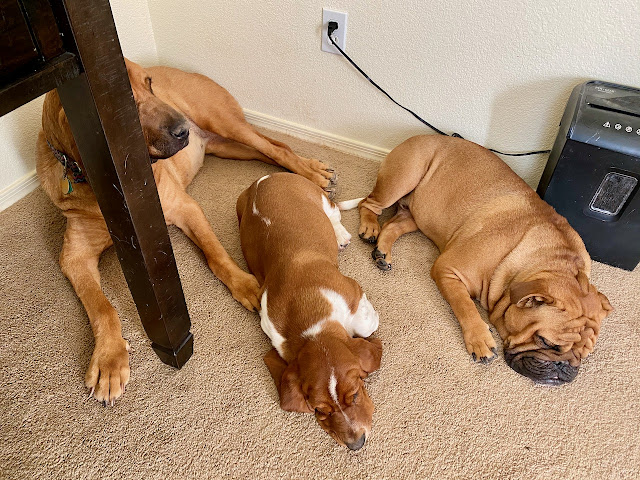 I am predicting that Trump will win 330 electoral votes on election night. Write that down on a scratch piece of paper somewhere if you want to remember later. LOL

A fast moving day today here in the 'Wild West'.