Based on my rural location I have just a couple of choices for internet service. For the past 8 years I've been using a local service provider that ran DSL over the AT&T phone lines. My other option was satellite internet. I saw and heard both good and bad from local friends, the local vet and online reviews. I felt comfortable enough to make the change to satellite, with a little apprehension. My DirecTv dish system has been fantastic so why not internet? 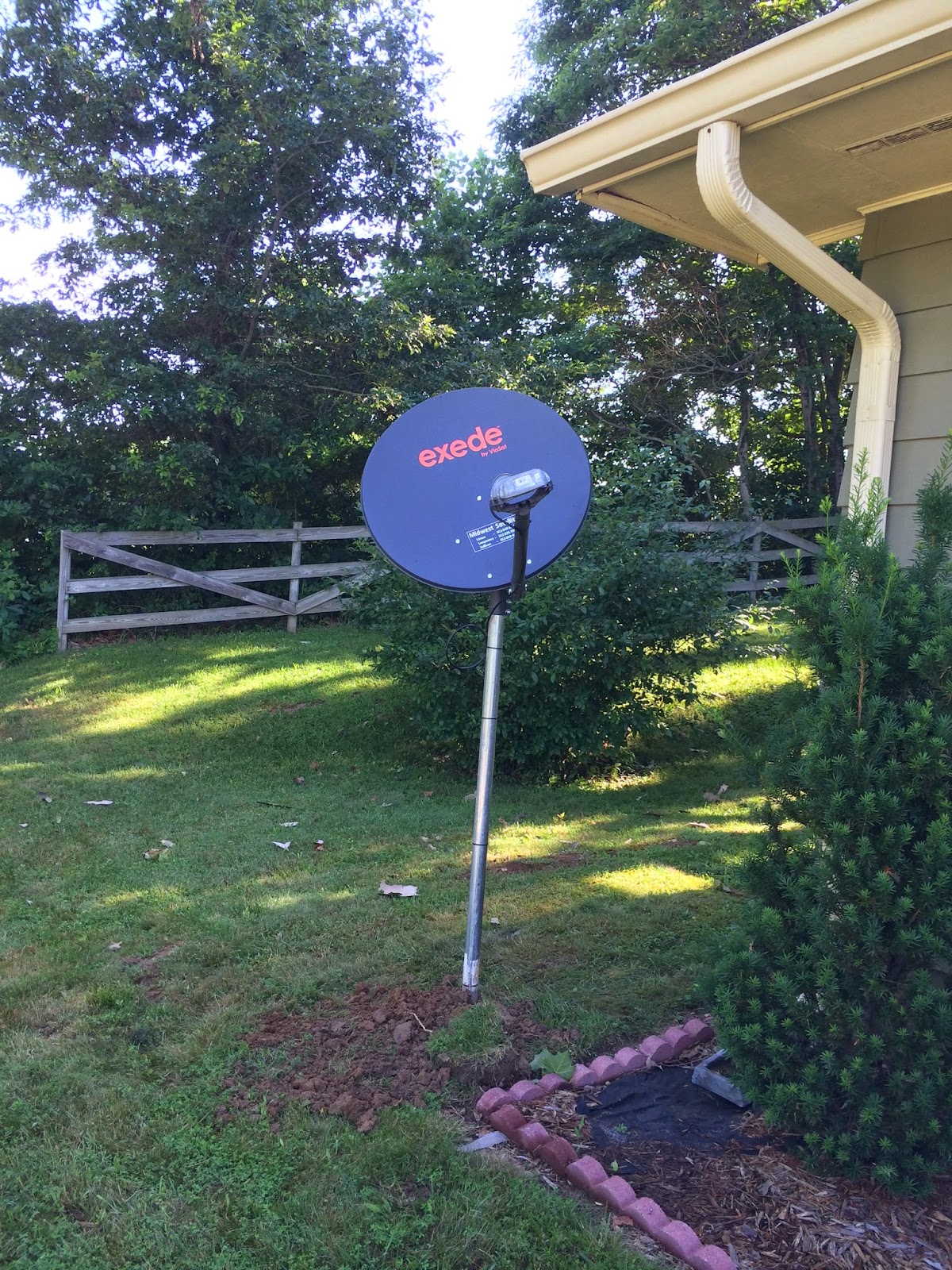 The installer arrived around noon with the weather radar showing storms either here or on the way. I thought I might have to cancel and re-schedule. It rarely rained while he was here as the storms moved over the top of us heading NE towards Indianapolis.

We looked at a few options for installing the dish. I had a couple of ideas in my head and one of those was not to install it on the roof. I don't like the looks of that (neighbor) and I didn't want to pay to have them come back in re-install if I were ever to put on a new roof.

Long story short it was installed where I wanted it without asking him. With it being the "era" of satellite dishes for tv and internet I guess they are now a normal part of the yard "decor" and I'll have to get use to it. It is higher than I thought it would be based on how low my DirecTV dish is but not that much higher. The DirectTV dish is just right of the green evergreen shown.

I had read that ViaStat had bought WildBlue and changed the name to Exede, upgraded their systems, equipment to where they have been rated #1 the past two years for delivering the internet speed they are advertising. Their system is also used in the government for field operations plus other areas. The packages were all priced about the same as DishNet and HughesNet. So based on their results for delivery internet speed as advertised which was 12Mbps for Downloads and 3Mbps for uploading.

After installing and setting up the modem and wireless router, speedtest.net showed the speed of 8.5Mbps with heavy cloud overcast. I was happy with that based on I have been living for years on internet speeds of 1.4Mbps tops and at times times .7Mbps. I checked it last night after midnight because anything I do is not added to my data count from Midnight -5am. Speeds last night at 1:38am were over 17Mbps!!!

There were no glitches setting up the modem and router.

As I write this on Wednesday morning, I am getting internet speeds over 13Mbps with sunny skies. It looks like it was a great decision to make the change in service.

The installer was under my house running coax cable from the dish to the opposite diagonal corner to my computer room. It's bigger than a crawl space and in some places you can almost stand up. After running the cable, he came out from underneath the house saying "I have some bad news for you".

It was house related nothing to do with the internet service.