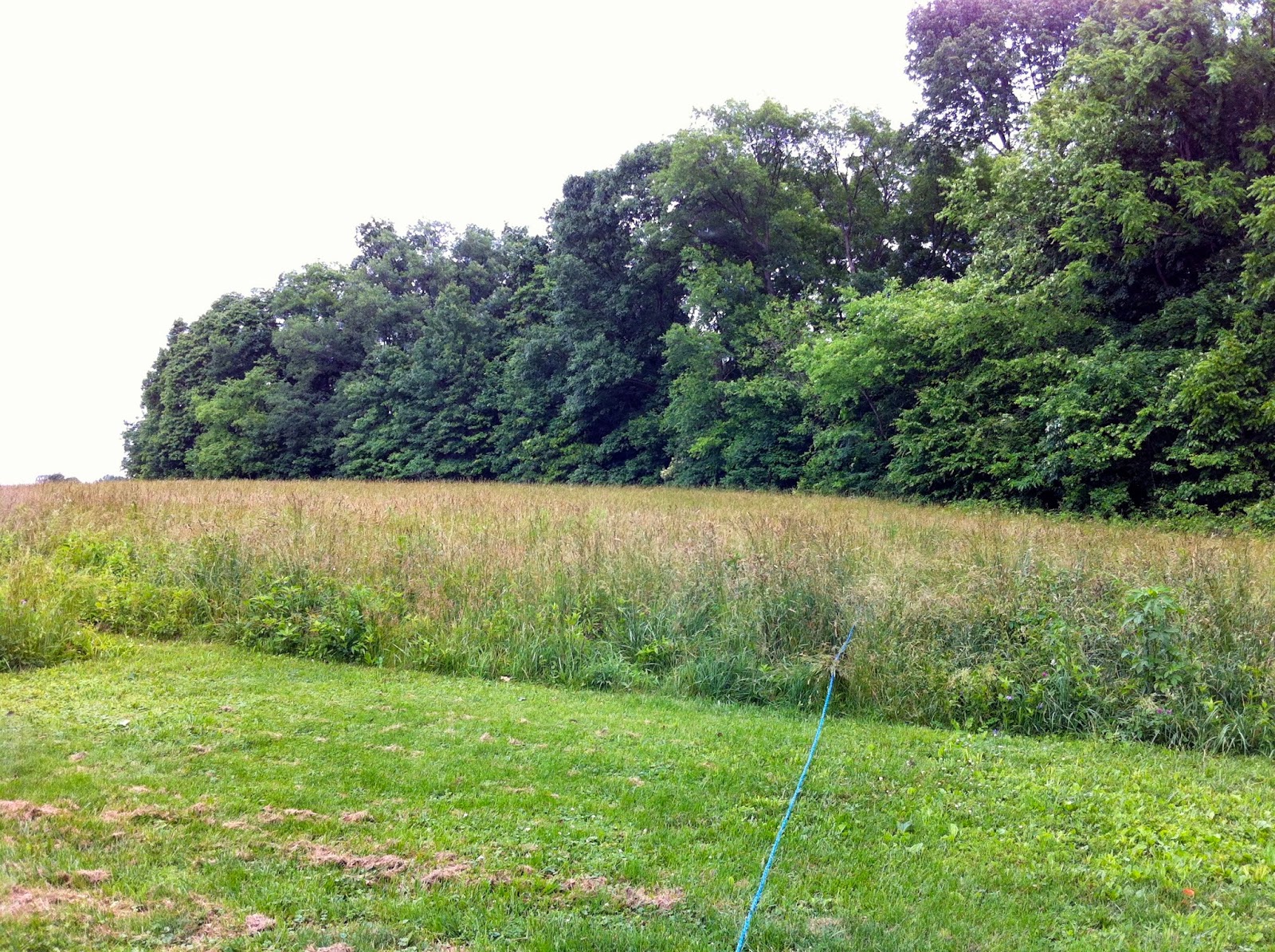 The field behind my house is owned by my neighbor a couple of houses north of me. He's retired, does a little farming but nothing to this property where my hounds roam. He does let a local farmer come in and bale the hay twice a summer if it's a good year and at least once if it's been too dry.

I met him the first time a couple of years ago and showed him where I had a metal livestock stake pounded into the ground where the climbing rope is attached to hook Sadie up to at the edge of my house. That way if we come out some morning or evening and their happens to be deer in the field, I can hopefully get her on that rope before she takes off. Also, I can let her outside and let her roam 80' diameter without taking a chance of her taking off after an animal and ending up on the road 100' away.

The farmer didn't find any problem with it. That was much different than the previous farmer that use to bale the field. He was mad a the world most of the time. I told him I can usually guess about the time they will be baling the hay based on how tall it is and what the weather is like. I use to roll the rope up to the metal stake and then hide both of them under a rubber trash can that I turned upside down. It was tall enough for anyone to see from their tractor seat. I did this to make sure that metal stake would not tear up one of their blades when cutting the hay and also not do any damage to their ranking machine. Of course the side benefit of saving me from paying my cash for damages but it also protected the take.

This does not get pulled out of the ground. I've tried and ended up one year pulling it out of the ground with the cable tied to my truck bumper and I backed up the truck. That is to show you have much effort goes into getting that stake out.

The previous farmer that baled the field for the 14 years of the 17 years I've lived here didn't get along with anyone but I never had a problem with him. One year I came home from work and found not only the hay field cut right up to my yard, but my trash can I had turned upside down was thrown about 20' the opposite direction. He had pulled the stake out with his tractor and I could tell the way it landed, he had thrown the stake and rope as far as he could into my driveway. It was obvious he was mad.

This is the same mad at the world farmer that got his tractor stuck in mud on the edge of my yard one year, trying to fit it around my parked VW bus when I had a total of 4 vehicles. I didn't say a word about that, but I didn't forget. I could tell he had that tractor of his buried in my soft slanted backyard on the south border.

Thankfully there was a sale of the land a few years ago. That is where this considerate farmer comes in. Below are photos from today, where the farmer starts cutting hay before I was even awake. I did not have the trash can out there to mark it, nor had I pulled up my rope. I didn't expect him today because of the forecast of rain. The photos will show how considerate he was without him saying a word.

He moved his cutting blade that was out to the side of his tractor, around the spot that had the metal anchor and up to the edge of my yard. Not tearing up anyones property in doing so.

So like prior years I will go out with my metal blade weed eater and and cut what you see standing...then rake that out into the field so he can rake it up to bale into large rolls, without having to get close the metal rope anchor.

Sorry for the long narrative, I just wanted to show how considerate this farmer was cutting the hay around the metal anchor for Sadie. These photos show a good example of someone going out of their way to be considerate of others on a very hot and very muggy day. He will be rewarded when he comes back to rake and bale the hay into the big round rolls.

This was taken just a few days ago...needs cut. 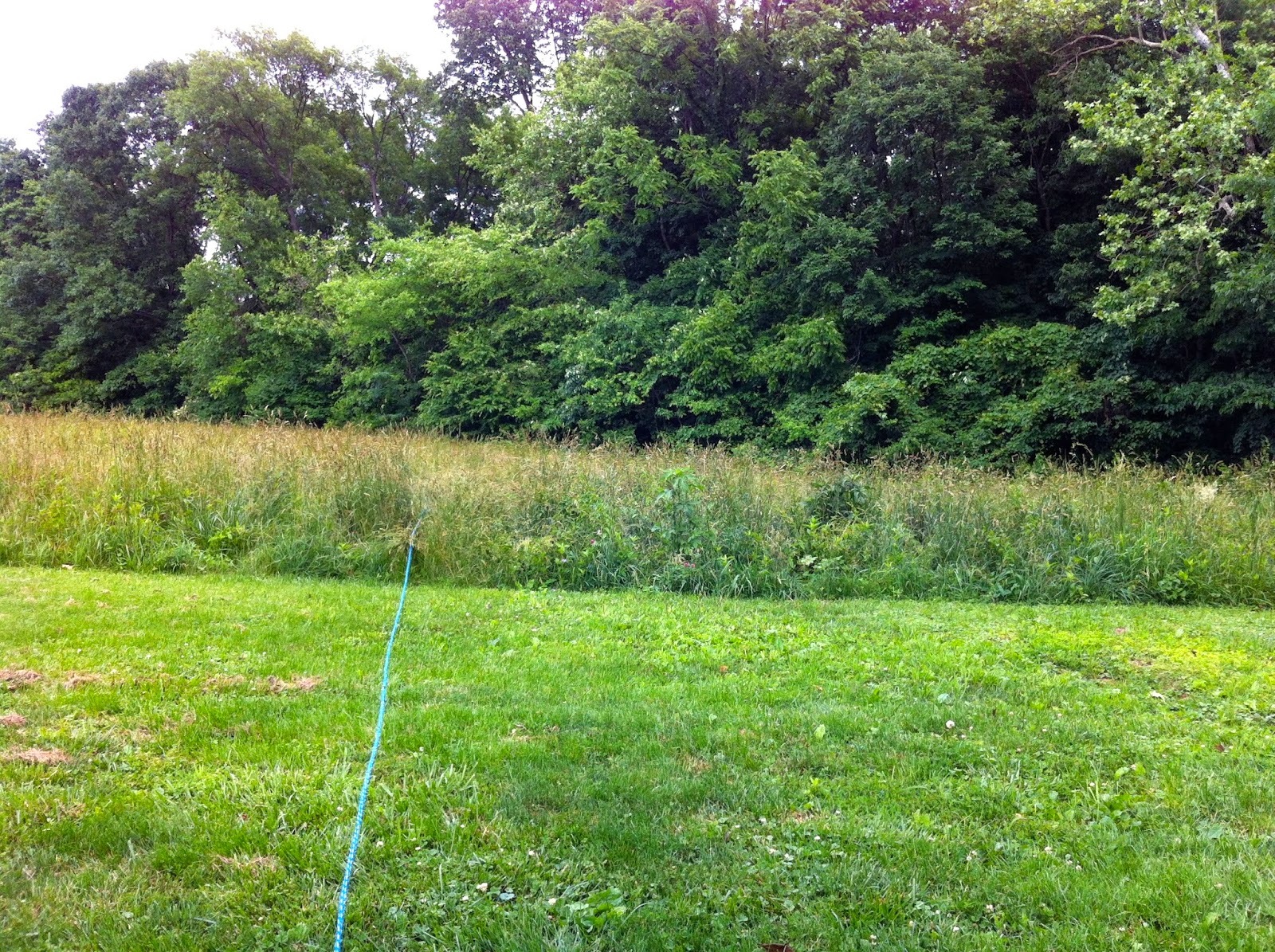 After he cut the hay today. I will cut what is standing with my metal blade weed eater 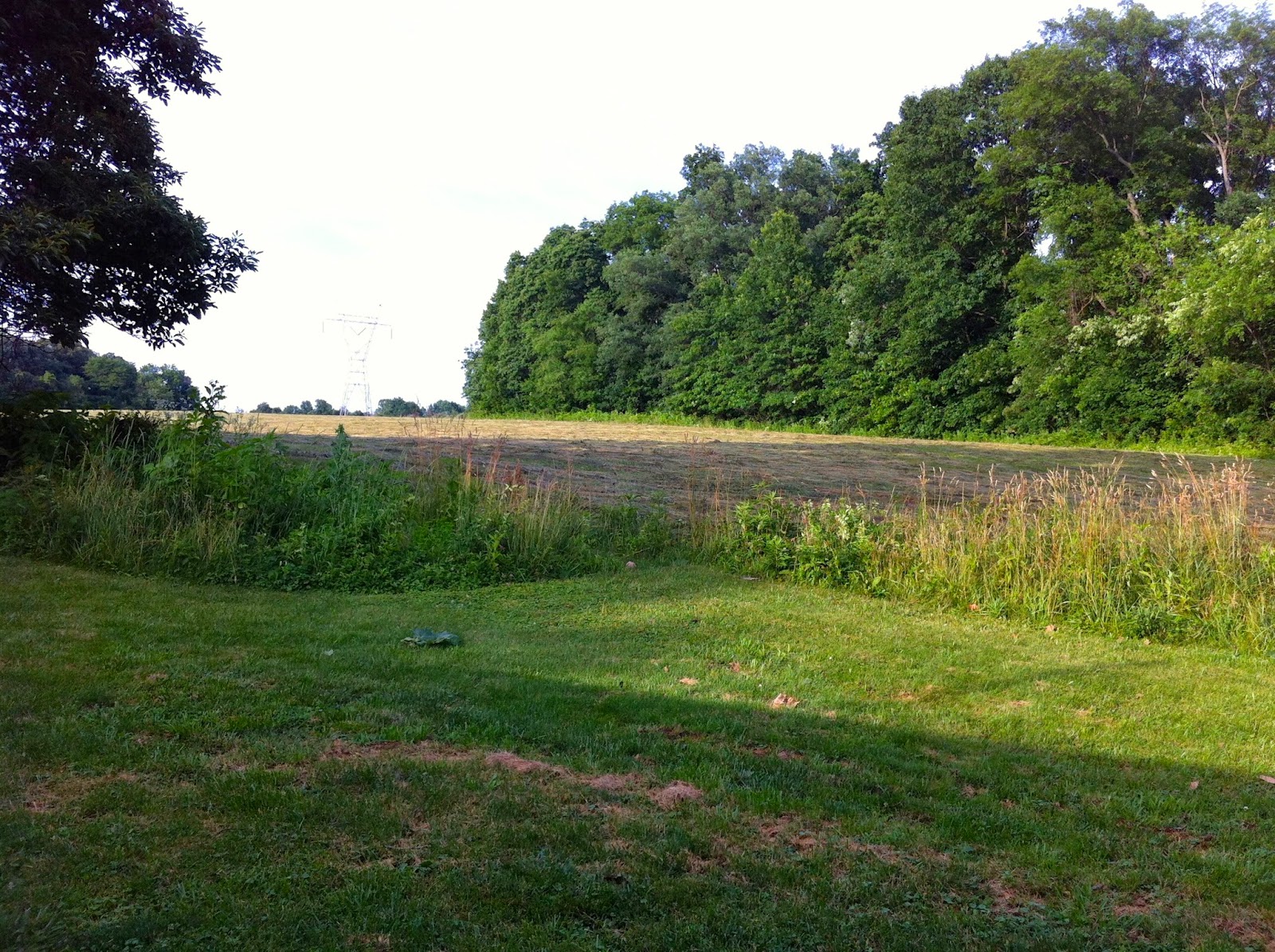 My metal anchor is down inside this hay...the blue rope is attached at the bottom 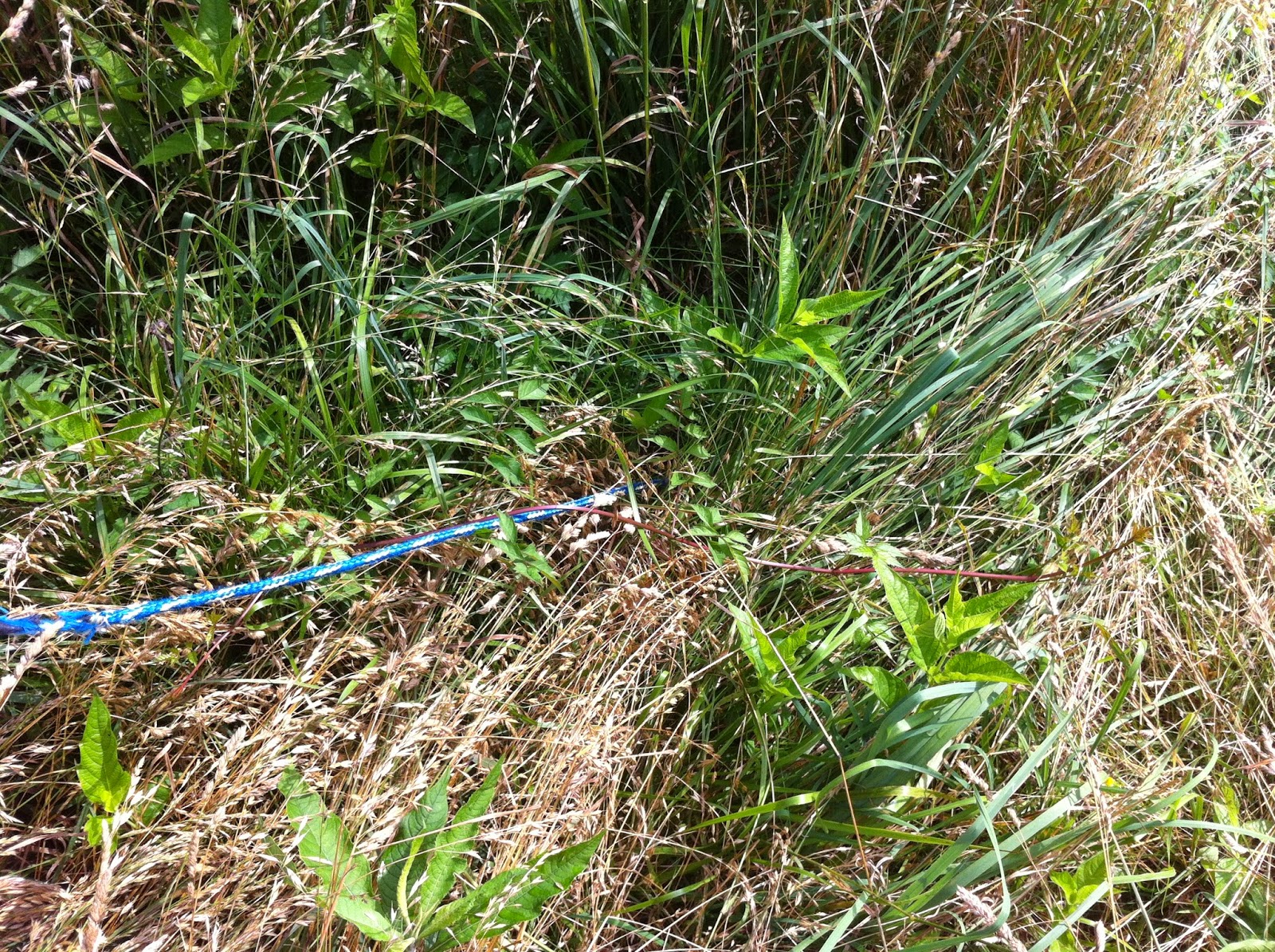 This is what I saw when I heard the rumble of the tractor as I walked outside this morning. He has started by cutting away from the metal anchor, then moved a little closer each time. 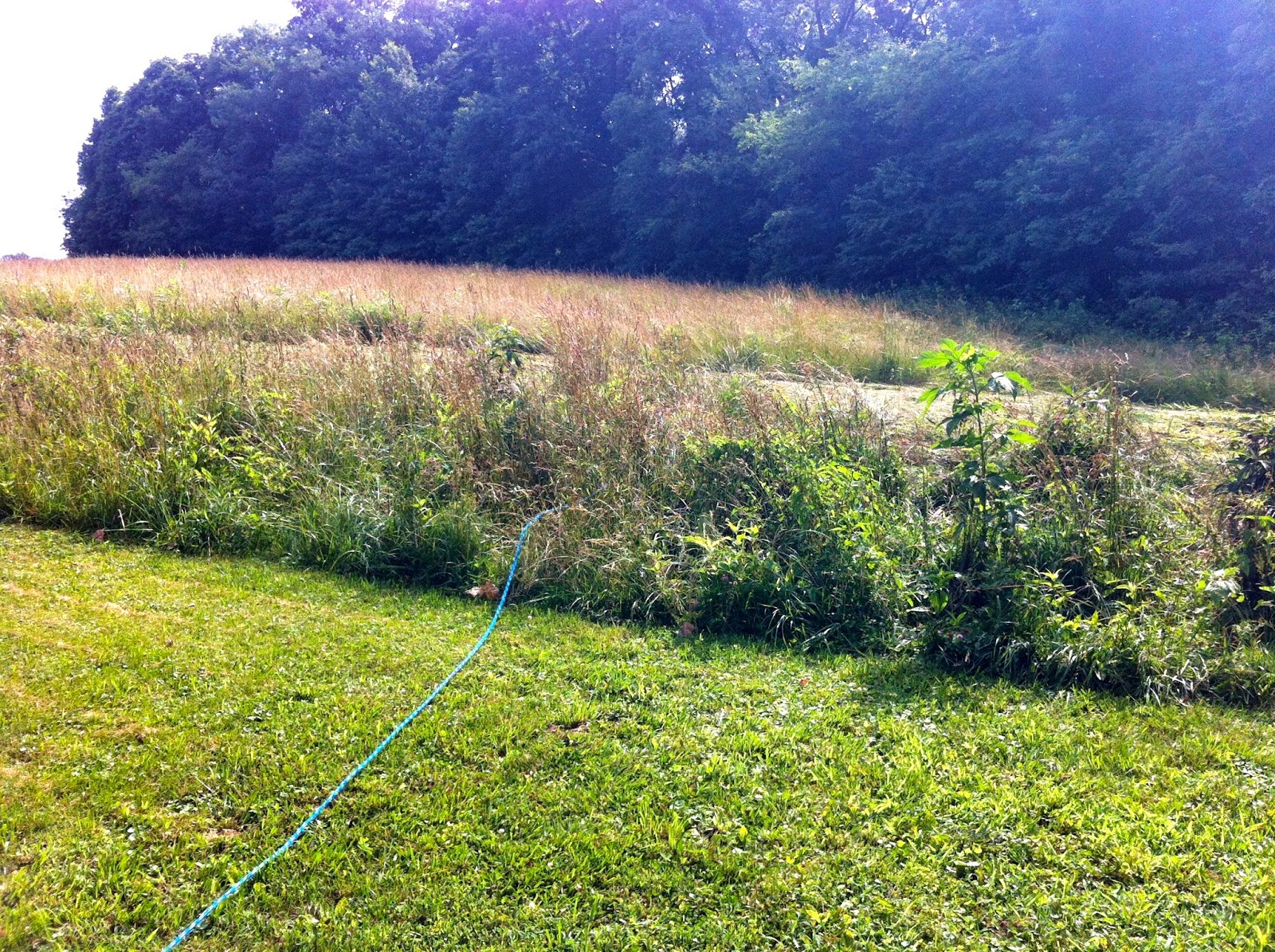 The following photos show how he came back and cut a little closer yet did not disturb the metal anchor that he knows is in that hay somewhere. 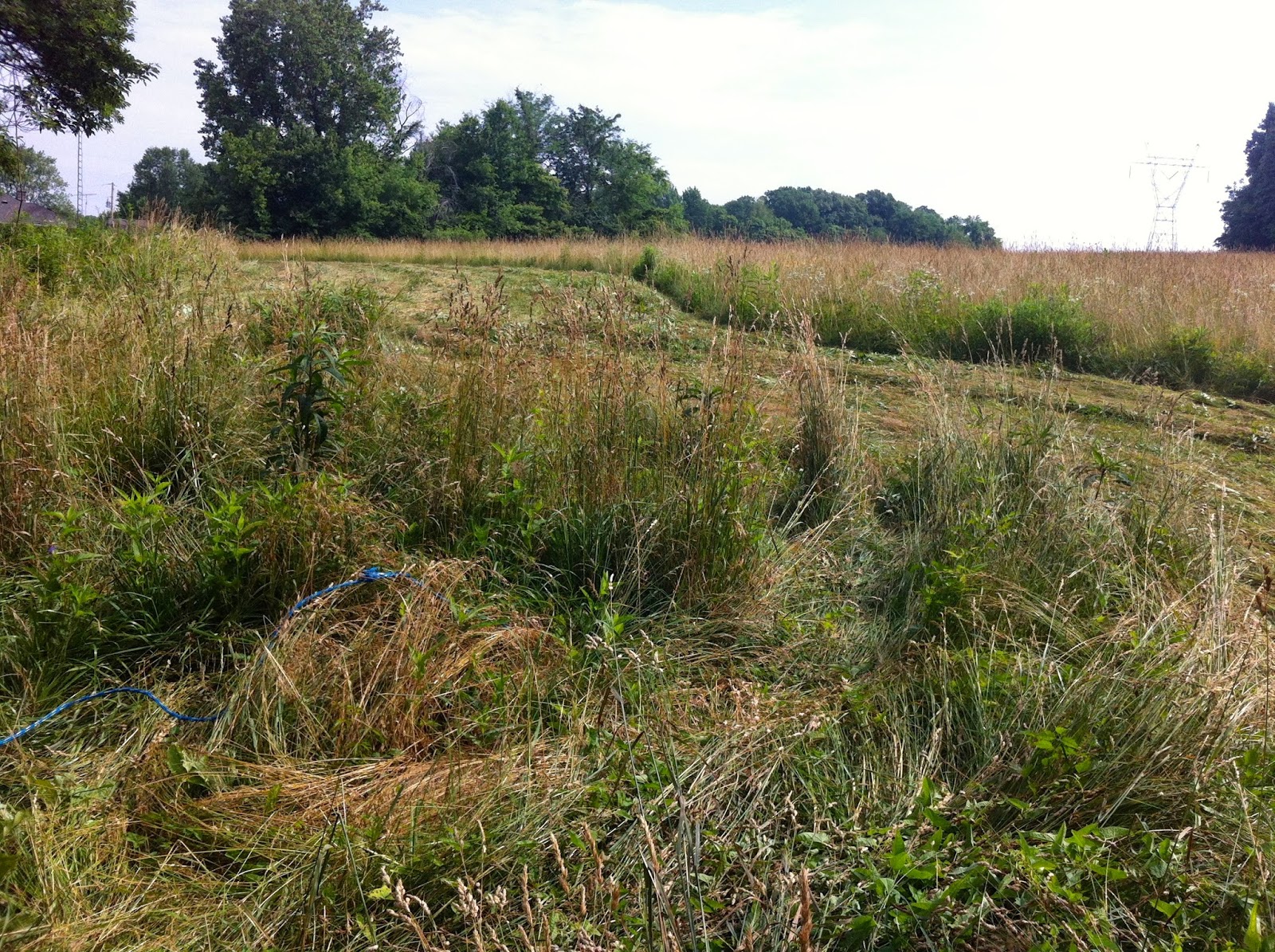 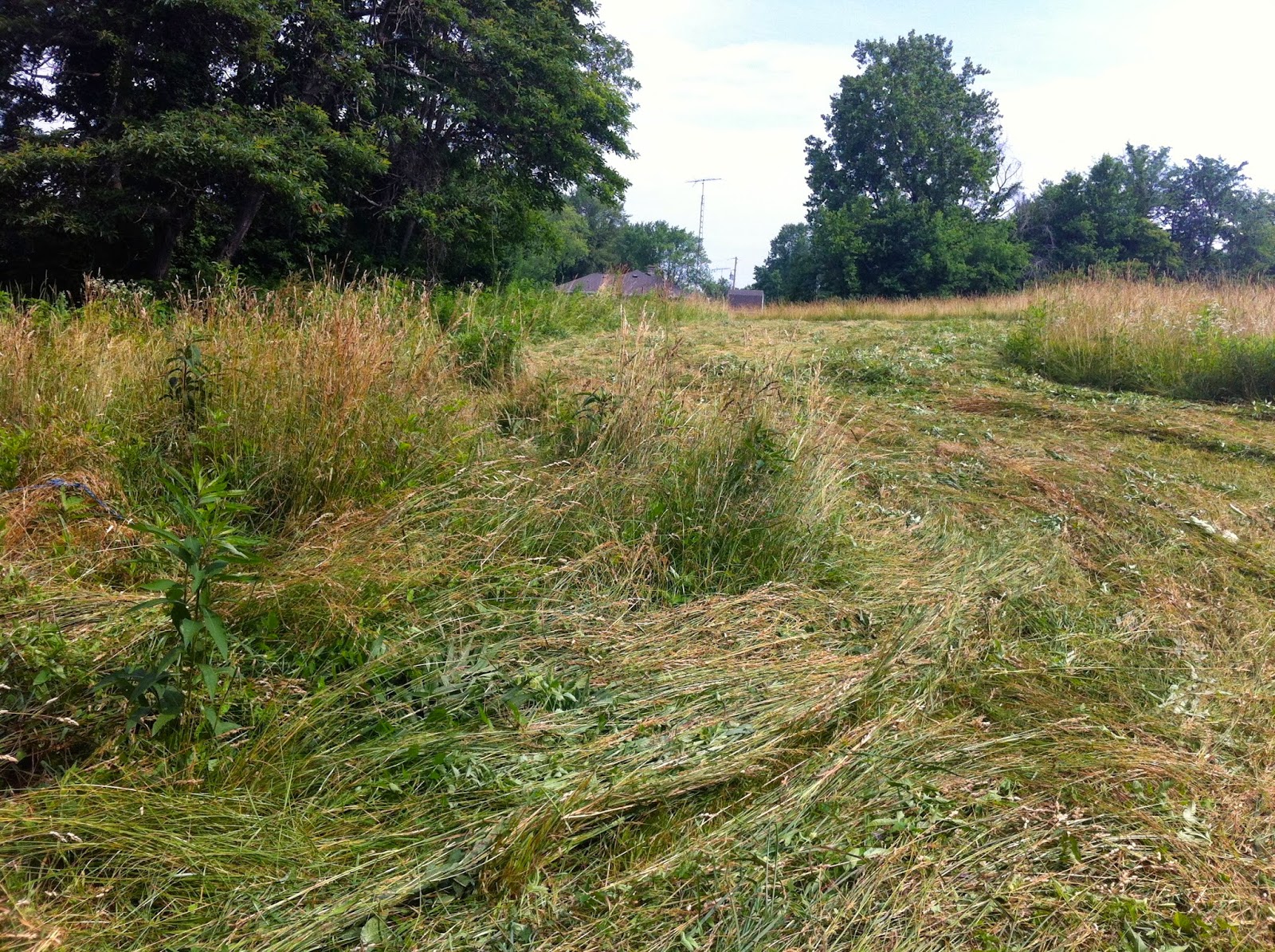 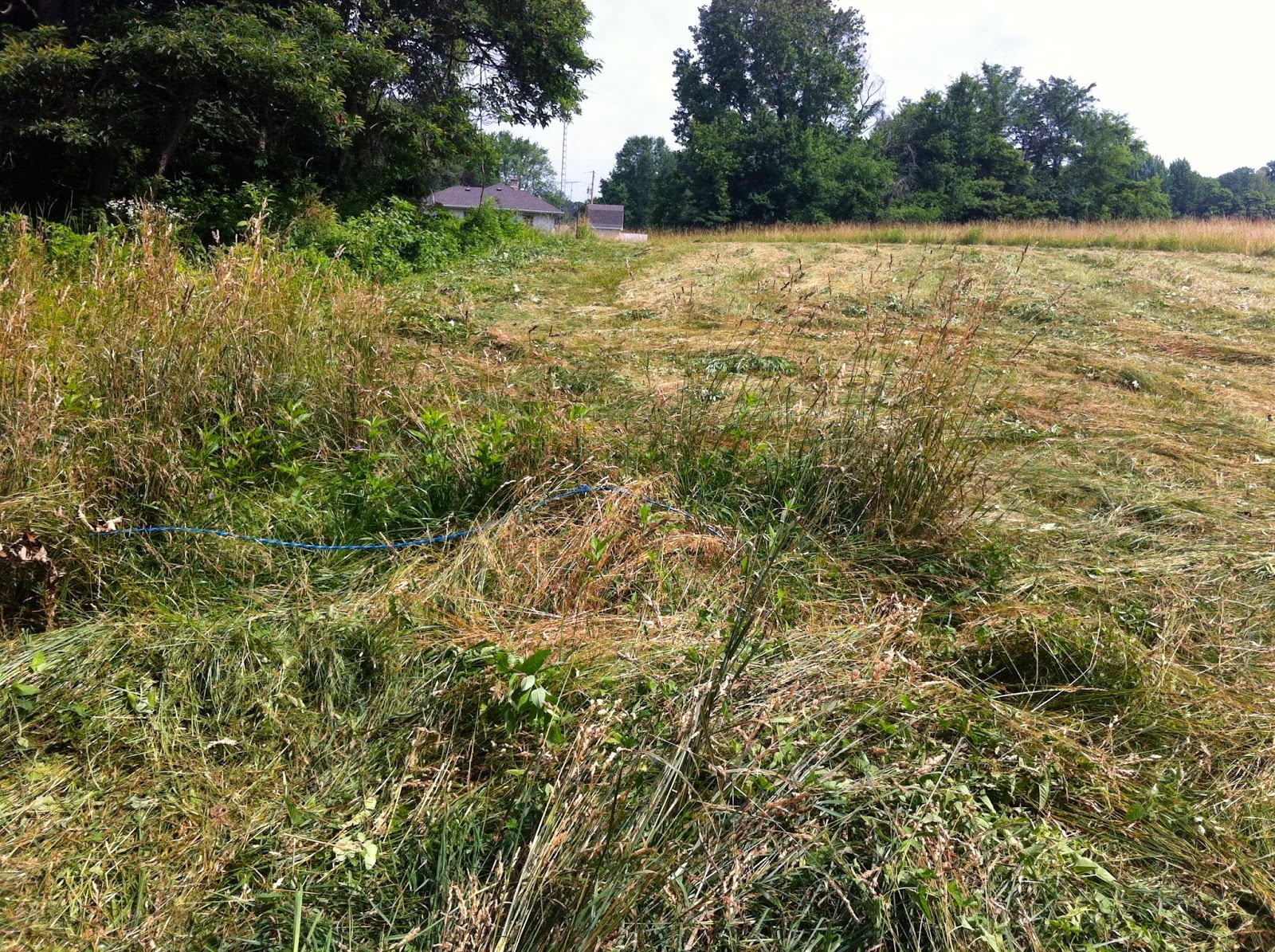 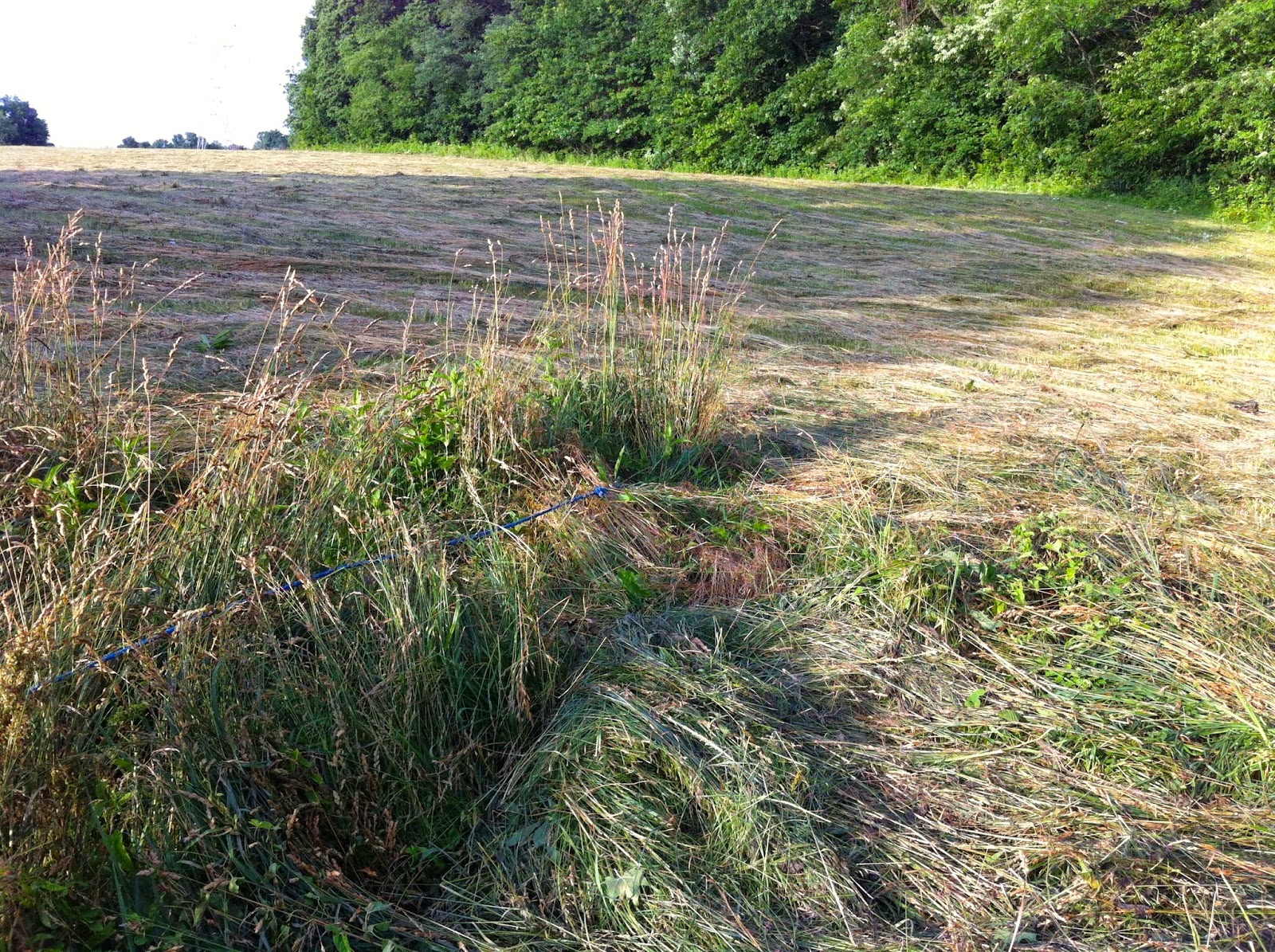 Still a little bit more trimming around my rope anchor. I will cut all that is standing tomorrow. To the left of the cut is my property that I normally cut in July.

I was on my way back from the internet provider outdoor lunch today as the skies turned black and the winds increased speeds that were curling huge trees. By the time I arrived at my local feed store to buy 40 more pounds of dog food for the hounds ... the skies opened up. The last photo shows he got every cut before the rains came. A few days to let it dry out, then the raked hay will turn into huge round rolls.
The best things about this ... the farmer gets his much needed hay and the hounds get "their" field back to do their daily walks. I in the meantime will have new territory right outside my back door to ride the mountain bike I bought a few weeks ago.
Life is good.
at June 20, 2014