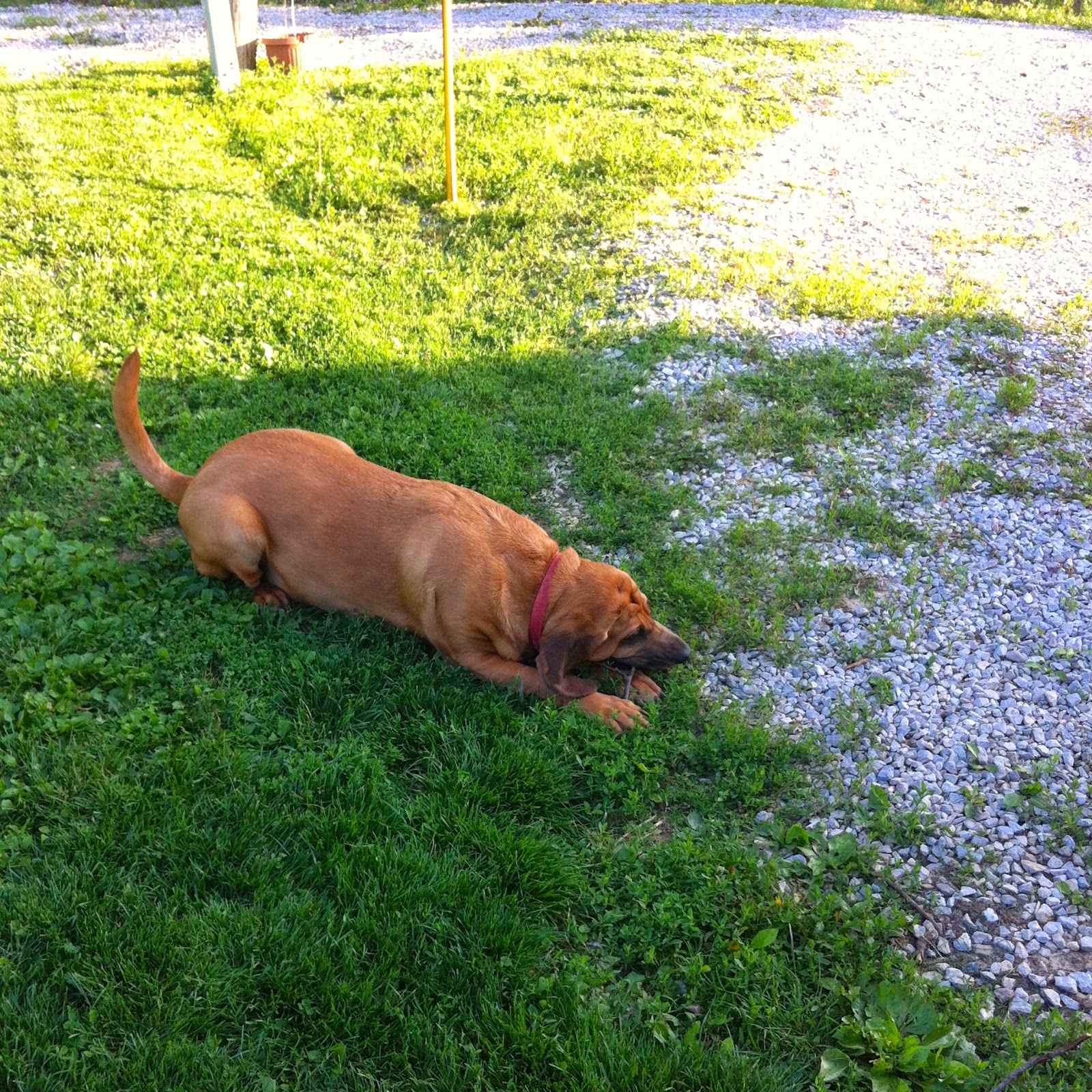 My bloodhound is 6 years old today and in a way I am surprised she has lived that long. Why? She will eat anything. At times she has broken into the container of dog food and helped herself to a lot of pounds of dog food, which could lead to bloating. That is a death call in large breeds.

Other than being the most obnoxious hound I have ever had, she also is one with the greatest personality and the funniest. I would have thought by now she would have grown out of some of her puppy habits. She has stopped some of them but on occasion will remind me what she use to do.

She was bought locally at the age of 13 weeks. I didn't pick her at first out of a litter of 8 puppies, but she was going to be a Red and that was what I was wanting instead of a Black and Tan. I took my basset hound who was 4 years old at the time, out to see the litter and Sadie was the only puppy that followed him everywhere he walked. So I changed my pick to her. I found out later from a different breeder, I may have thought that was nice she was following Winston but what that really meant was she was strong in tracking. That trait of a strong tracker is what makes her bored, especially when I use to be away from home during the day. A bored bloodhound will find something to do and in her case it was chewing. Just like the picture.

Now in that picture she is chewing a stick. Her thing is not to eat the stick but chew them off into 1" lengths and spit them out. Similar to one of her past favorite things of breaking into my closet and chewing off just one plastic tip on the shoestring ... per shoe. Should wouldn't chew the shoes, nor both shoestrings ... just one shoestring tip per shoe and spit that out on the floor.

Needless to say as a puppy she was destructive and there was nothing I could lock her out of. I was amazed at what she could get into and with her strong nose, it was amazing the things she could find around the house that I had lost and couldn't find.

She is a great hound though. Always has been a house dog. Kennel trained at first and then slowly migrated to a dog bed on the floor in the bedroom. While in her kennel one day while I was at work, she actually bent the strong black steel rods that I couldn't bend back with a pair of pliers. Her kennel were the ones you see that are black and the largest size. With her jaws had squeezed two of those black rods almost together, trying to break out.

She doesn't like change, of any kind. Don't raise her food or water bowl, they must be on the floor and they must be in the same spots or she will not eat nor drink. She is not aggressive, has never gotten into any dog fights with my other two basset hounds ... but will growl and drink water at the same time if one of the bassets wants to share her water bowl. She and the basset's have their own water bowls.

So at the age of 6 today, June 19, she is still the big old clumsy puppy. Who else could come running for her food, clip the edge of the water bowl with those big paws and see 5 quarts of water and the bowl flipping airborne? LOL

She really has only one bad habit that she still does and it consistently happens when I am in the shower. Some way she can remove two 20# dumbbells that sit on the food container lid at each corner to keep her out. Ill see the dumbbells on the floor, the lid tore off and a nice container that holds up to 40#'s of dry food available for her to scarf ... until the shower water is turned off. By that time she has snuck into the bedroom and is laying on her dog bed as if nothing has happened.

Otherwise she is a great bloodhound. She is in great shape, has never been sick and still has the energy of a puppy.