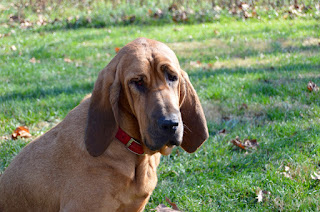 The Nikon D3200 mystery continues. After verbally abusing my camera on Tuesday, it worked perfectly all day Wednesday ... both lenses. This morning it performed without missing a beat ... both lenses. I am still not happy about the inconsistencies.

I might have multiple posts today since this one is earlier than planned, but I skipped yesterday. In fact I am thinking about making multiple posts per day, basically writing when I feel like it and include photos ... instead of the 'summary' format.

The hounds, excluding Heidi, and I have been a little 'low' energy since the leaf project was finished on Tuesday afternoon. It's Thursday, nice weather but I don't have any motivation to get on the roof of the house to clean out the gutters, nor clear the leaves along the drive. Maybe a nice strong wind will take care of the bank along the driveway. If I could get my smaller gas powered leaf blower to start I would be more inclined to do both jobs. It will not start and I'm not a small engine mechanic.

Tuesday started with Sadie and Stella playing inside. It's always at a slower paced, not as aggressive type play inside. Once I opened the door to go outside they were in full out playing mode. 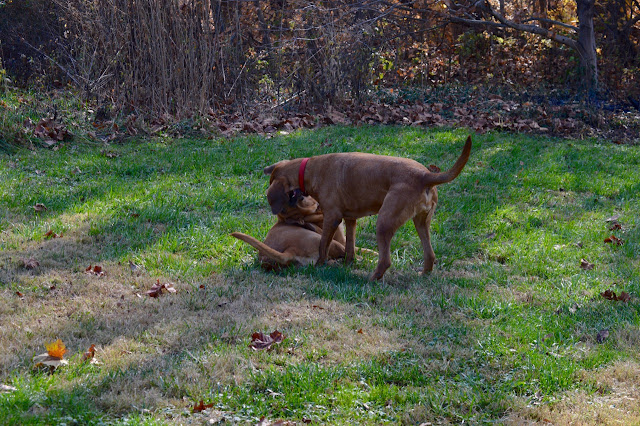 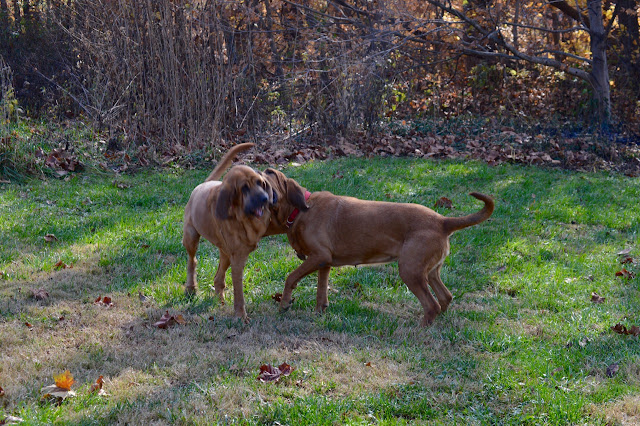 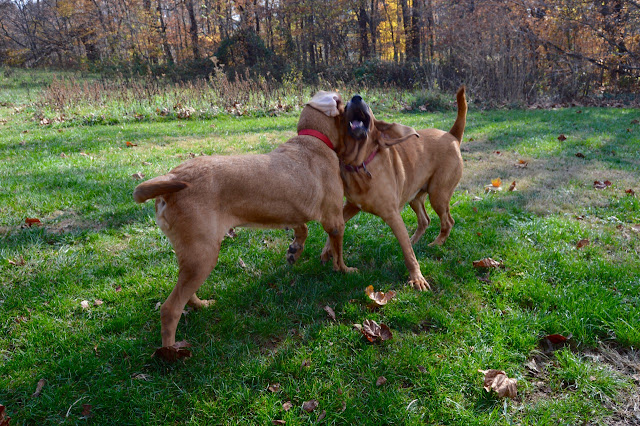 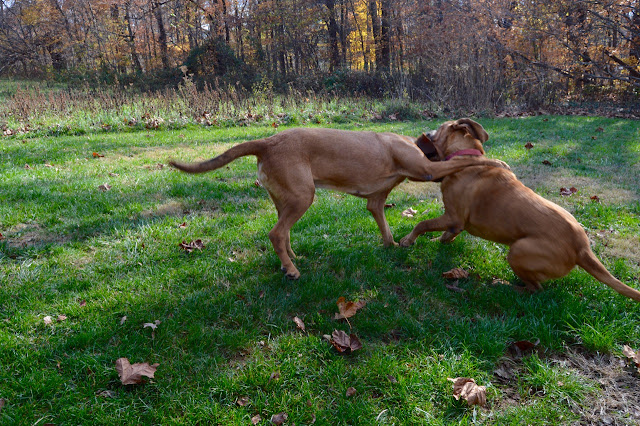 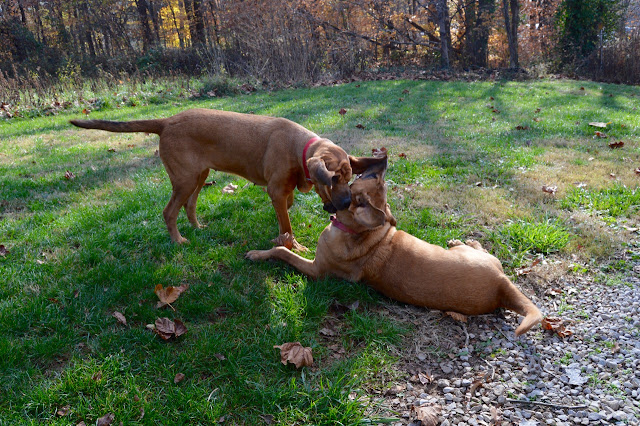 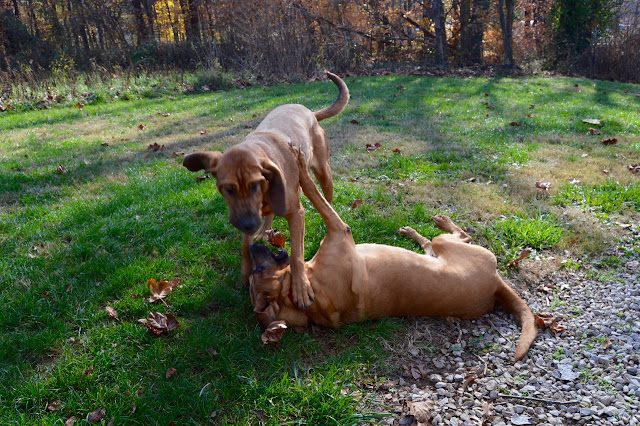 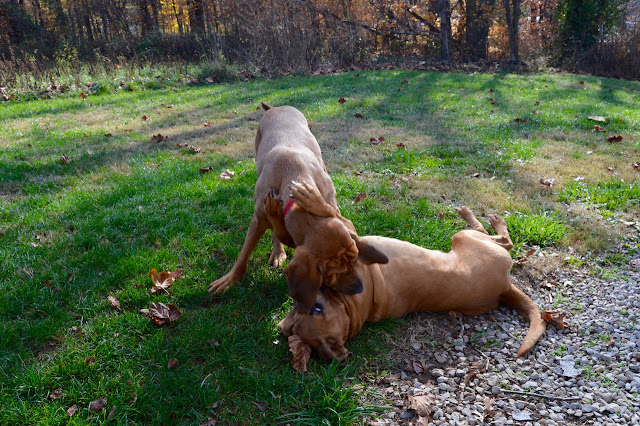 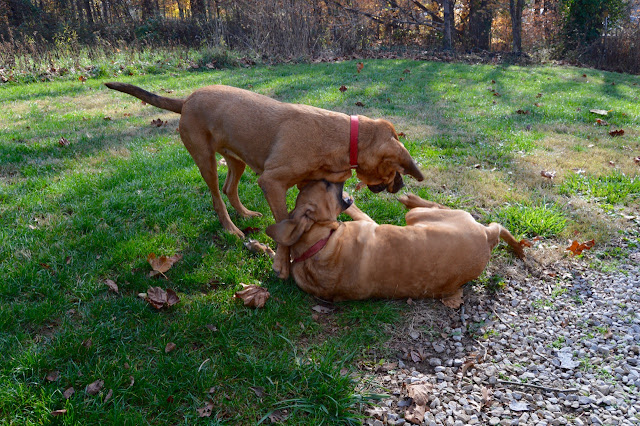 Then just in an instant, they would stop and sniff the air, take a look over the yard and field. It's an ugly time of year. The color of the leaves is gone. Plants have died and turned ugly brown. All of those tall dead plants in the field have burrs ... burrs that the two bloodhounds have decided are their appetizers. They like chewing the burrs, they don't like swallowing them. Guess who gets to take them out of their mouths??? 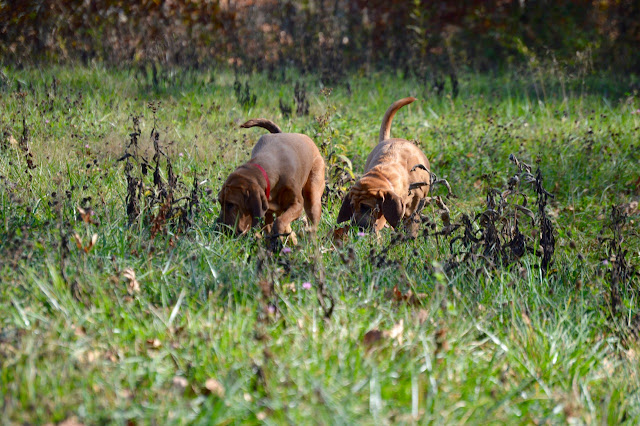 So nothing much was done on Tuesday. The hounds relaxed anytime we went outside. I spent the day reading books and ignoring dishes and laundry. I continue to wait for the day of forecasted rain, using that for justification for not doing inside chores until I have a reason to stay inside. The problem is, here in the tropics of southern Indiana the weather changes daily and forecasts are rarely accurate when it comes to rain or snow. 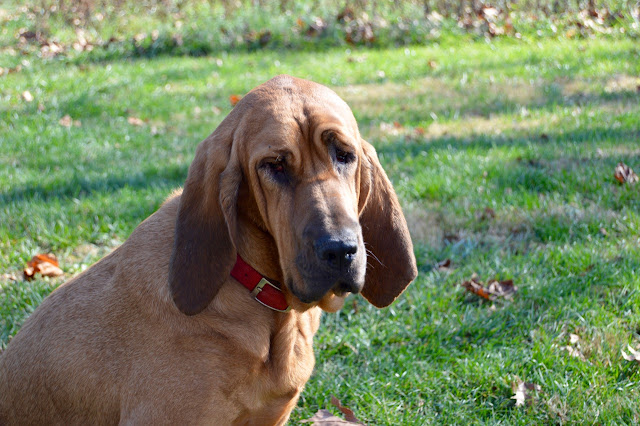 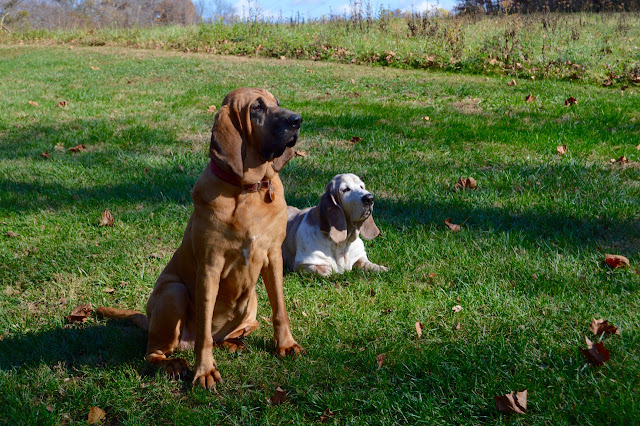 With the World Series over, that is one less sport to track but with college basketball starting soon I will be back to not having enough televisions.

This morning over coffee I felt like blogging. The hounds played only for a short time and three of them just enjoyed staying outside. Winston and Sadie in fact did stay outside to roam the field while Stella and I went back inside. Heidi of course refused to move from her sleeping position so far today. Lately Heidi has liked going out after lunch, maybe late afternoon and something new ... late at night. 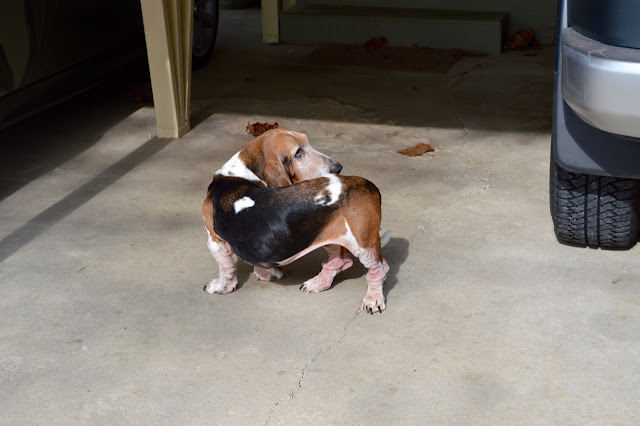 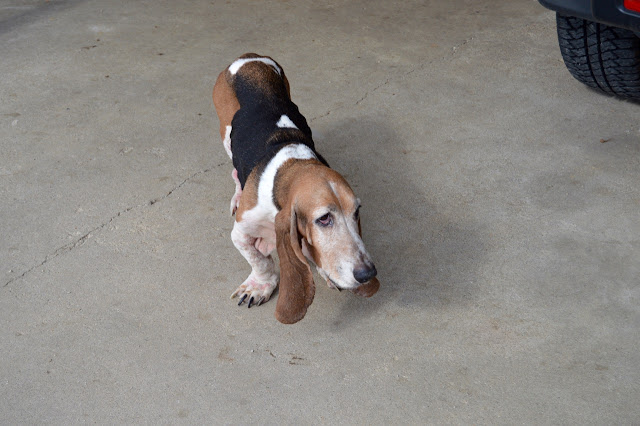 What is it about hounds searching all over the place for that one specific spot to dump their tanks? They will search the field from one end to another just to find that specific spot. At least I don't have to pick it up when they do it out there. 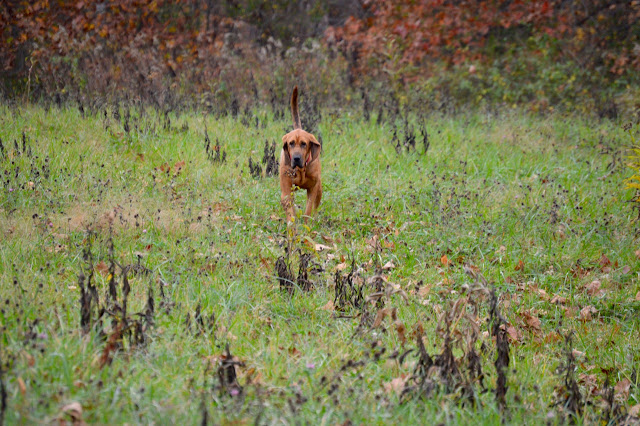 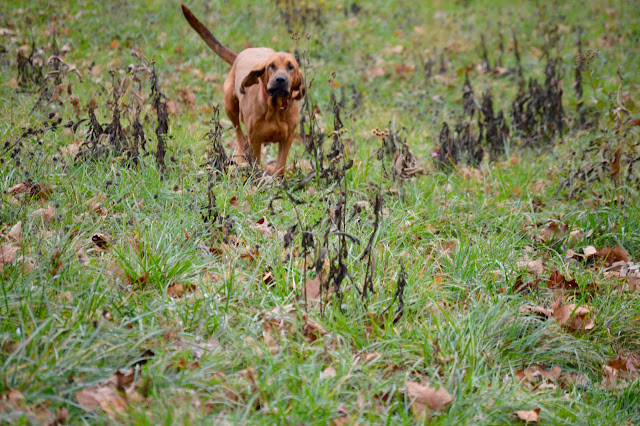 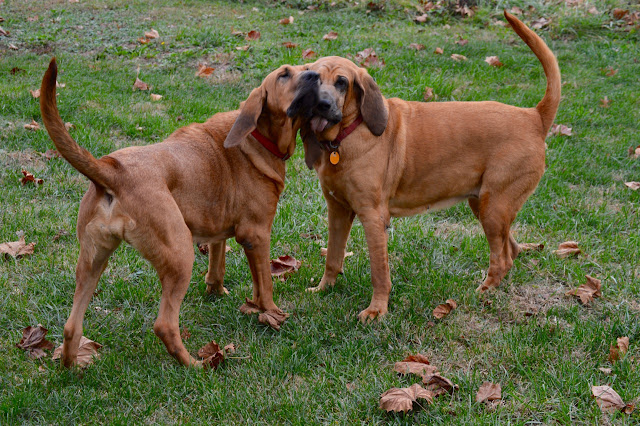 Here is Winston giving me that "innocent" look again, after I see him eating something he has found in the field. He always thinks he is getting away with it. 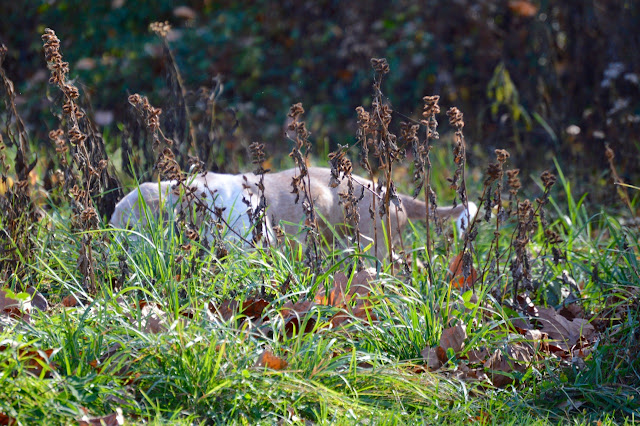 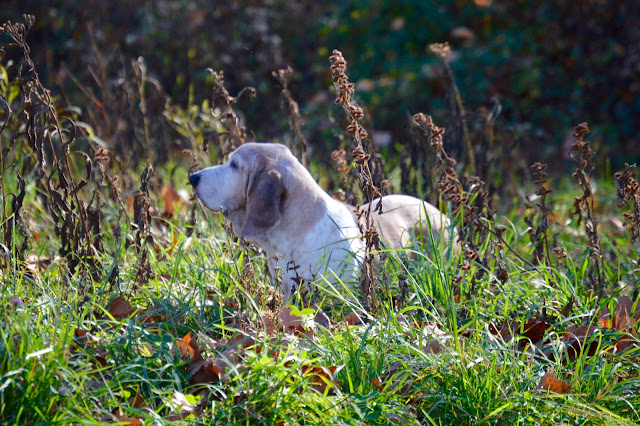 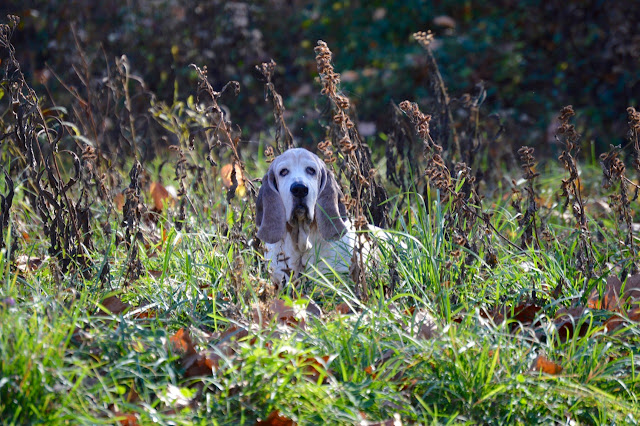 Not sure what is on the schedule today. It's slightly overcast, cool temps and feels like a pretty non-productive day. It will be another day of reading books, an occasional game of Mahjong and prep for the NFL Thursday night game tonight.

Retirement never gets old here in "the tropics" of southern Indiana.
at November 05, 2015