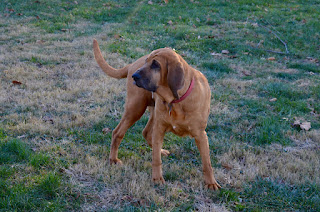 I read an interesting blog post yesterday by someone I have followed many years. I cannot believe I started this blog 4 years ago in October. There have been times I have not felt like writing, there have been times I have even shut the blog down and came back. So I could understand what Nina over at Wheelingit was saying here. I think most people that blog have been there at some point. It's a great read about the aspects of blogging.


For those readers that may be thinking of starting a blog, Nina's post is very informative. You can click here to read some great inside blogging information.

As I sit here this Monday morning, it's colder than I like but I know it's part of the deal when you live in the Midwest. It will get warmer later this week where some forecast shows a high of 62° on Thursday. With all of this cold weather, the hounds don't spend a lot of time outside. If they are not eating or outside for a short period of time, the basset's sleep and the bloodhounds chew. All the hounds sleep most of the late morning and afternoon until their 2nd meal time.

Sadie and Stella choose 2 bones out of the 6 or 7 possibilities and most of the time they each want the same one. There is never any fighting over them. The bloodhound that does not have the bone will stand over the other as she lays on the floor with the bone between her paws, chewing away.

The weekend was nothing out of the norm. A lot of good college football games on tv on Saturday. I watched parts of NFL games on Sunday but never stuck with one and would flip over to a college basketball game, depending who was playing ... all around an afternoon siesta. The biggest action during Saturday were the 4 hounds  wanting 3 seats. Even I lost my seat late Saturday night when I got up from the couch.

It was near 20° when we went outside Sunday morning and for some reason Sadie and Stella started playing as soon as they had one paw out the door. By the time I closed the doors and turned on my camera, they were both in the backyard going full tilt, frozen grass and all. 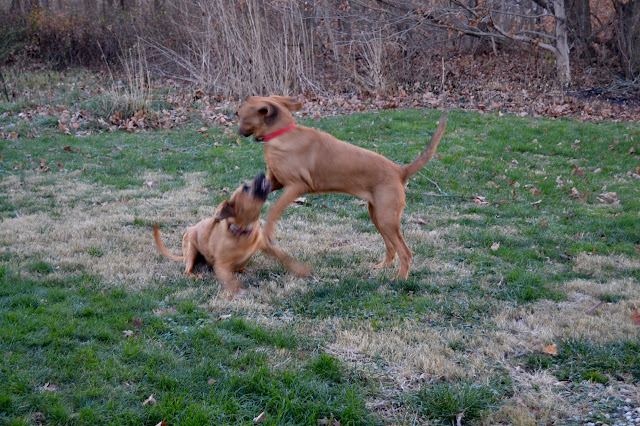 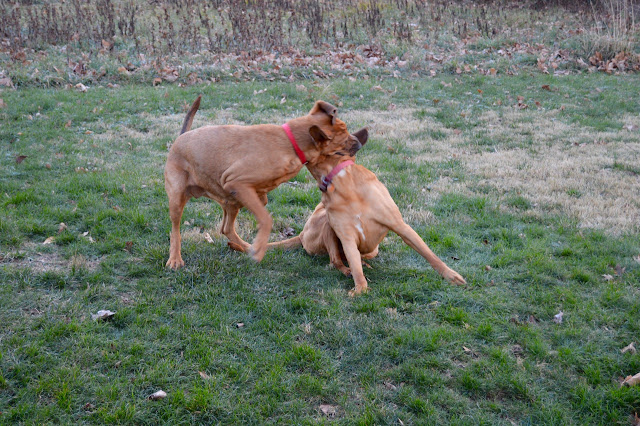 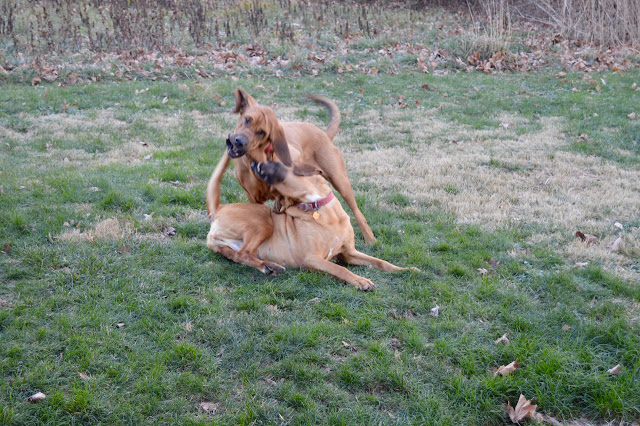 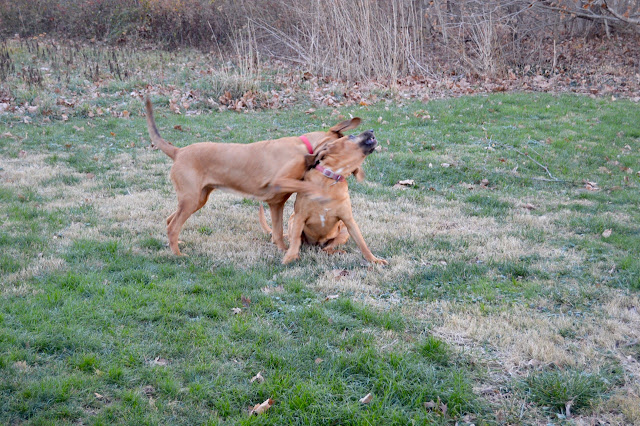 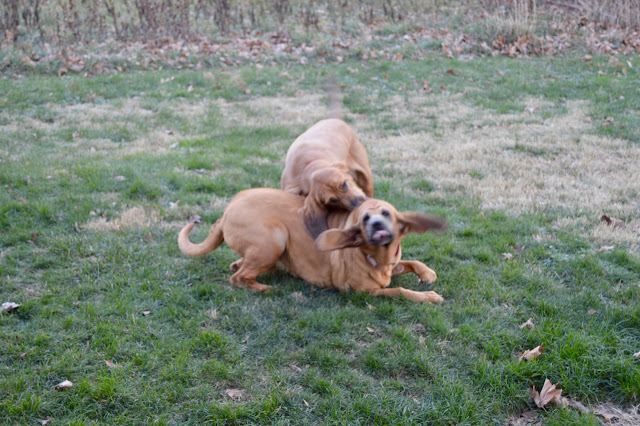 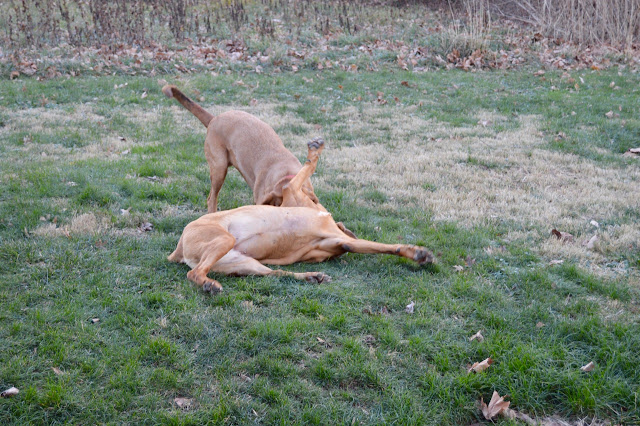 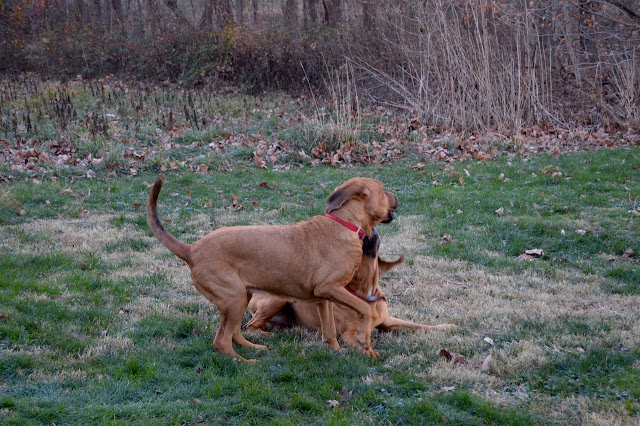 Just as fast as they started ... they will stop ... then head toward to door to come back inside. 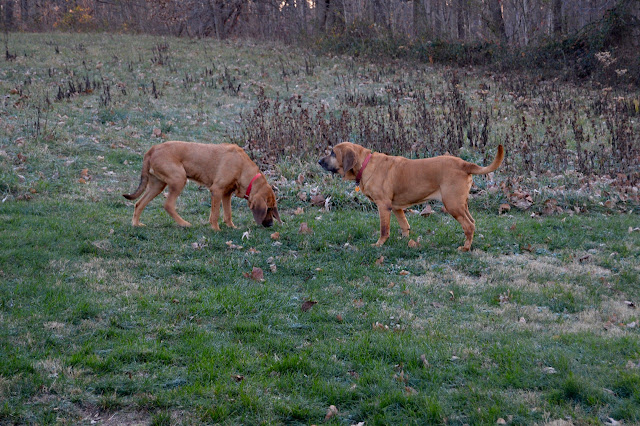 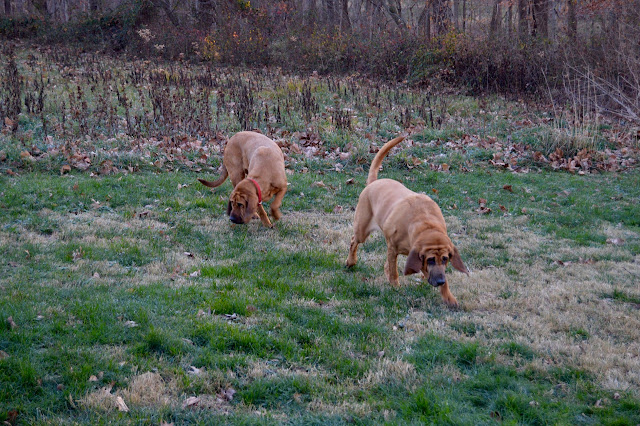 I've been reading a lot of books, watched a couple of movies and really just hanging out inside the past few days. I need to replenish the food supply so that will be my social activity for the day ... waiting in the checkout line.

The scenery locally is all pretty dead looking. If it were to snow a lot in the future, I'll get out and get some photos to post but I think you can see by the background of the hound photos, it's pretty ugly right now.

The brown spots in the yard is where I had the Class C parked from September 2013 - April 2014. I've tried to plant new grass there last spring but it looks like I will end up tilling that part of the yard next March or April, plant grass the correct way and then cover it with straw to start the process.

For some reason, even with cold temps, I don't have the urge to travel. That might change later but I have my doubts. I find myself reading fewer blogs, I hardly ever read the RV forums anymore. Those periods of high intensity research on what to buy or do and trip planning has disappeared.

It will be another winter of hibernation here in the tropics of southern Indiana.
at November 23, 2015