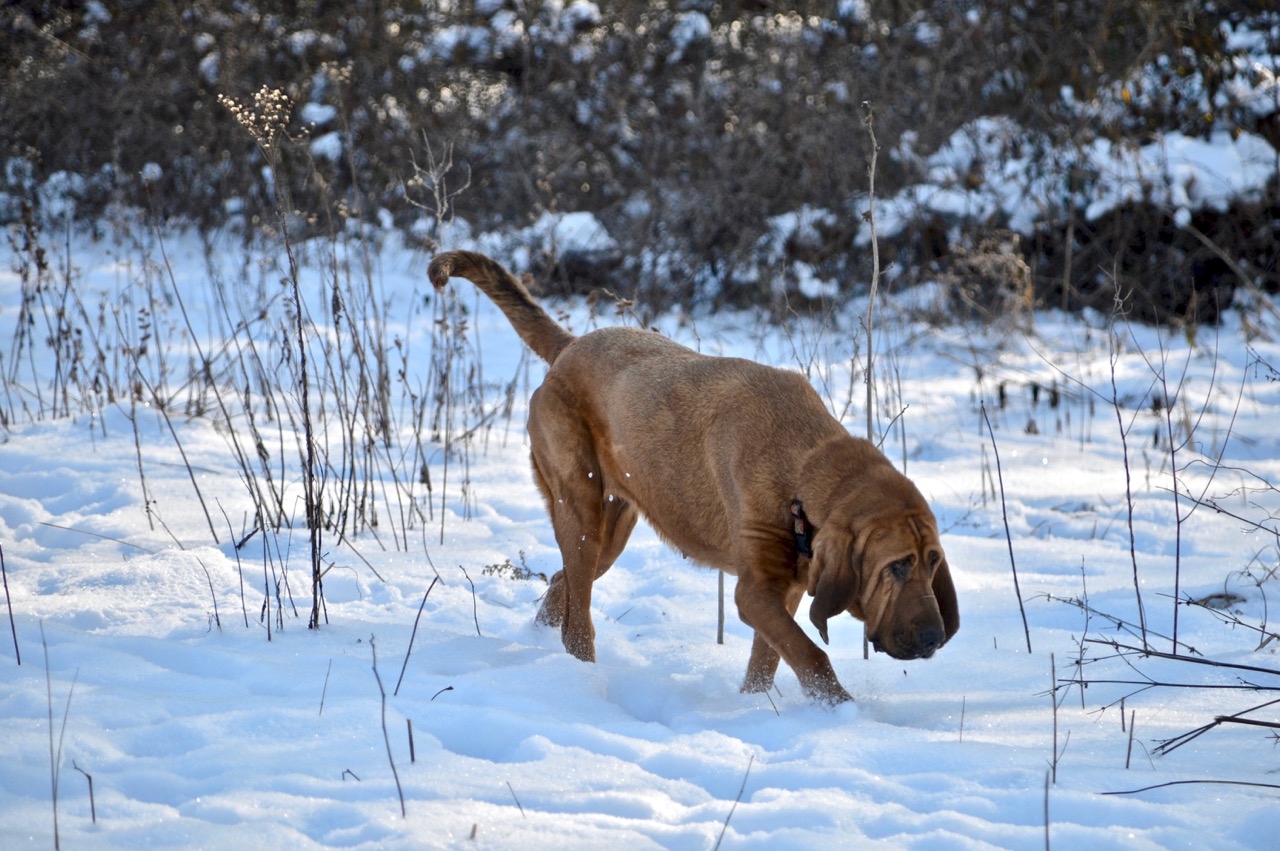 I think you will be able to tell the difference between the photos that were taken in the mid-afternoon compared to those late morning. We had no plans of walking anytime anywhere before mid-afternoon. By that time the temperature had climbed to 15° and with bright sunshine it felt warmer. Stella did not agree. 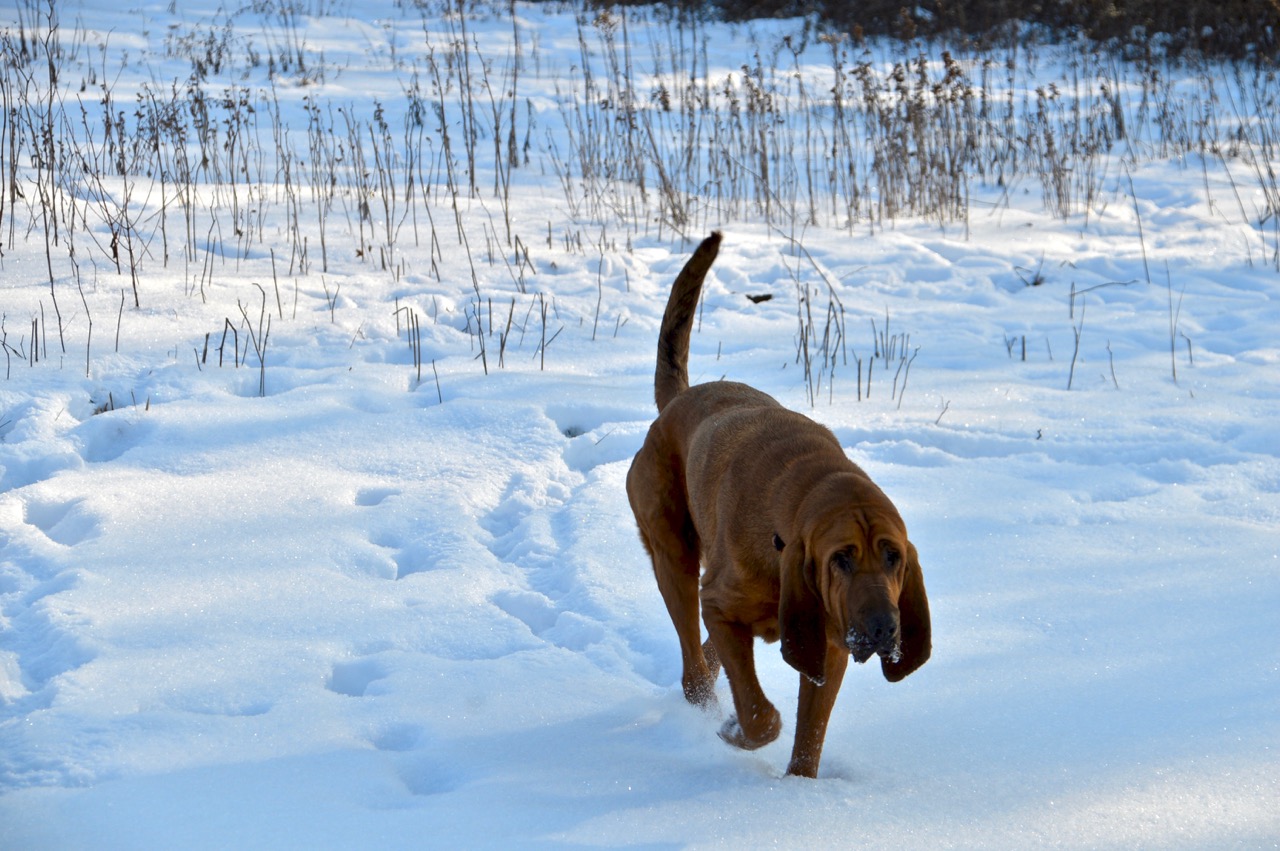 It was still 6° and a wind chill below zero when Sadie and Stella went out a little after 10am to dump their tanks. Their trip was a little longer trip than yesterday but only by a minute ... but the time I took that picture of Sadie running they were back inside the house within 2 minutes and 18 seconds. 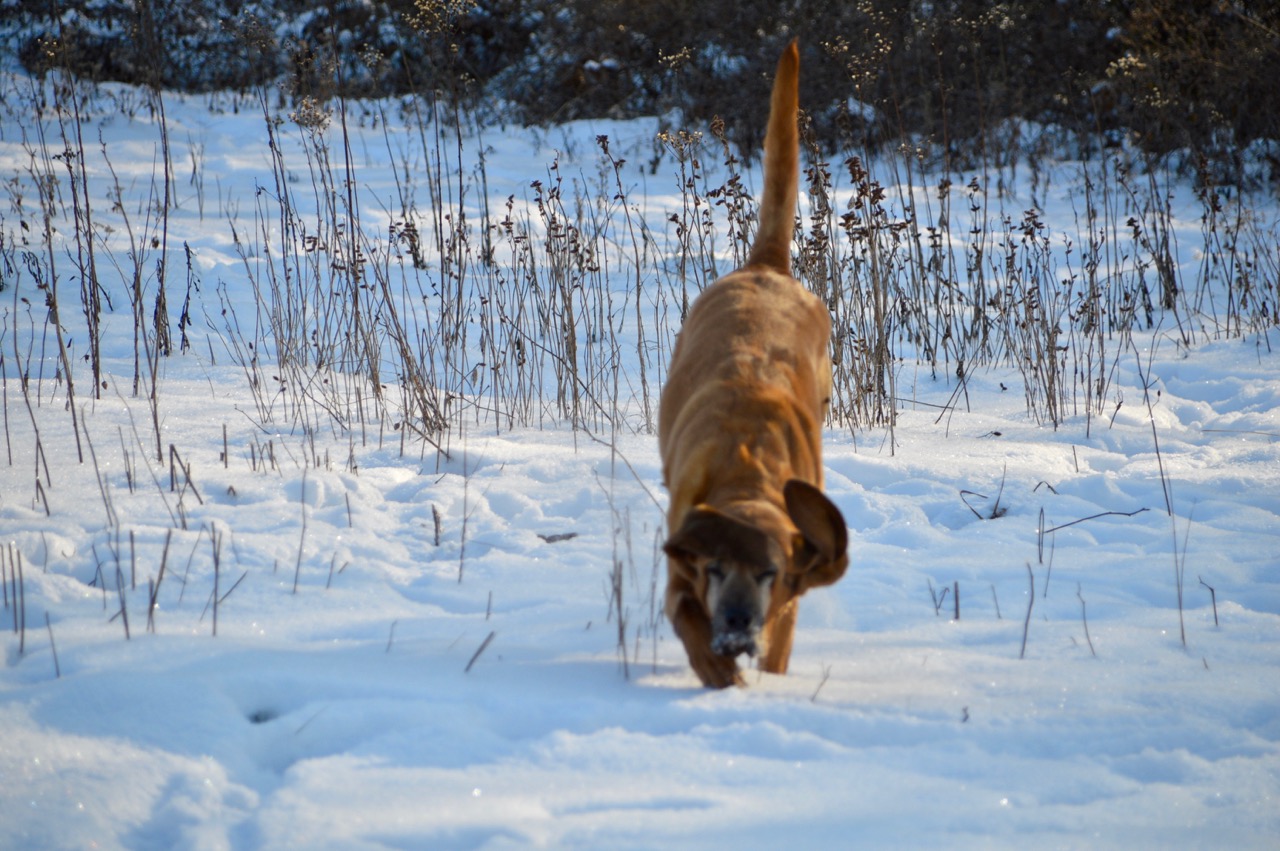 I never had to call either one because it was just that cold. 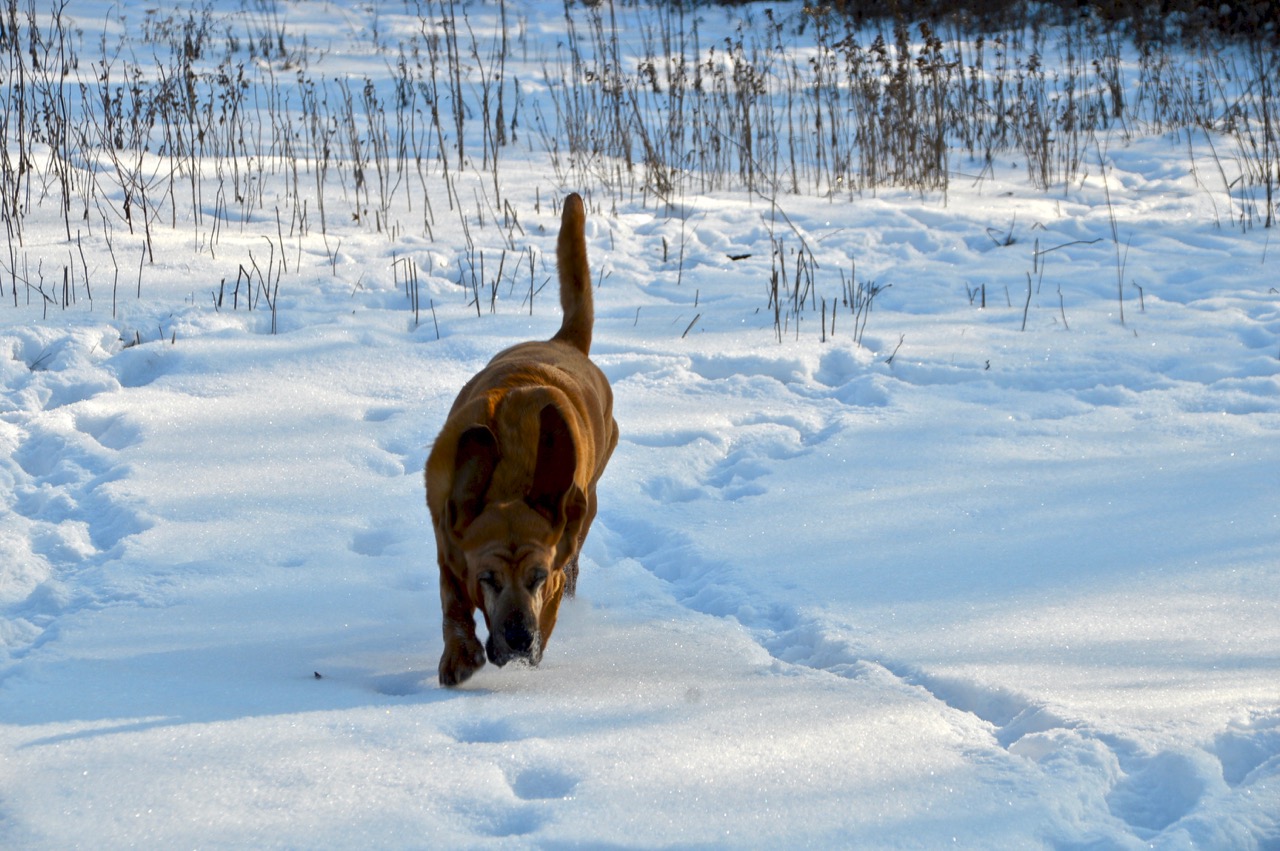 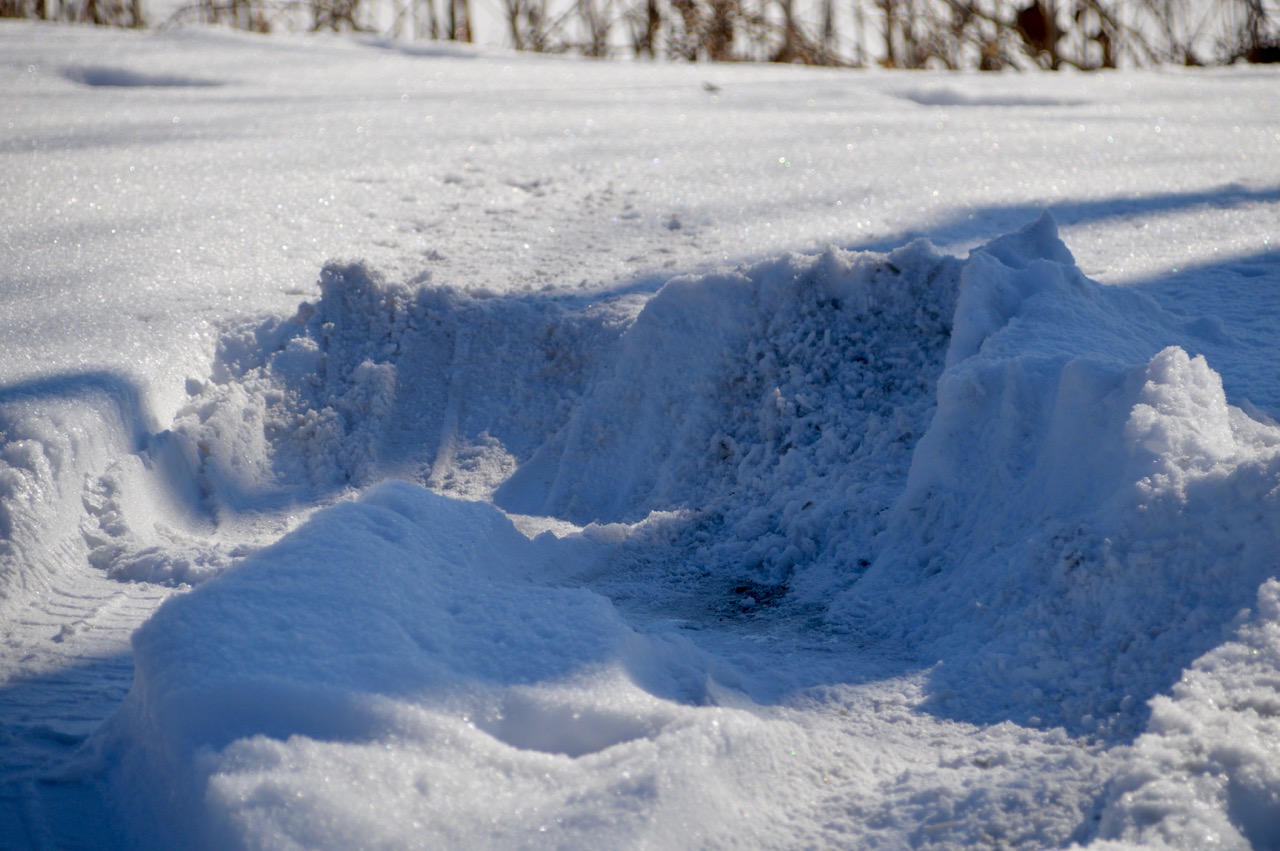 I needed to go to town for a new bag of dog food if I was going to have enough kibble for their lunch. Since I did not want to shovel my driveway outside the carport, I drove the FJ back and forth mashing down snow deeper than suspected. With that nice ice base at the bottom, I was stuck .. until I went into low 4wheel drive. 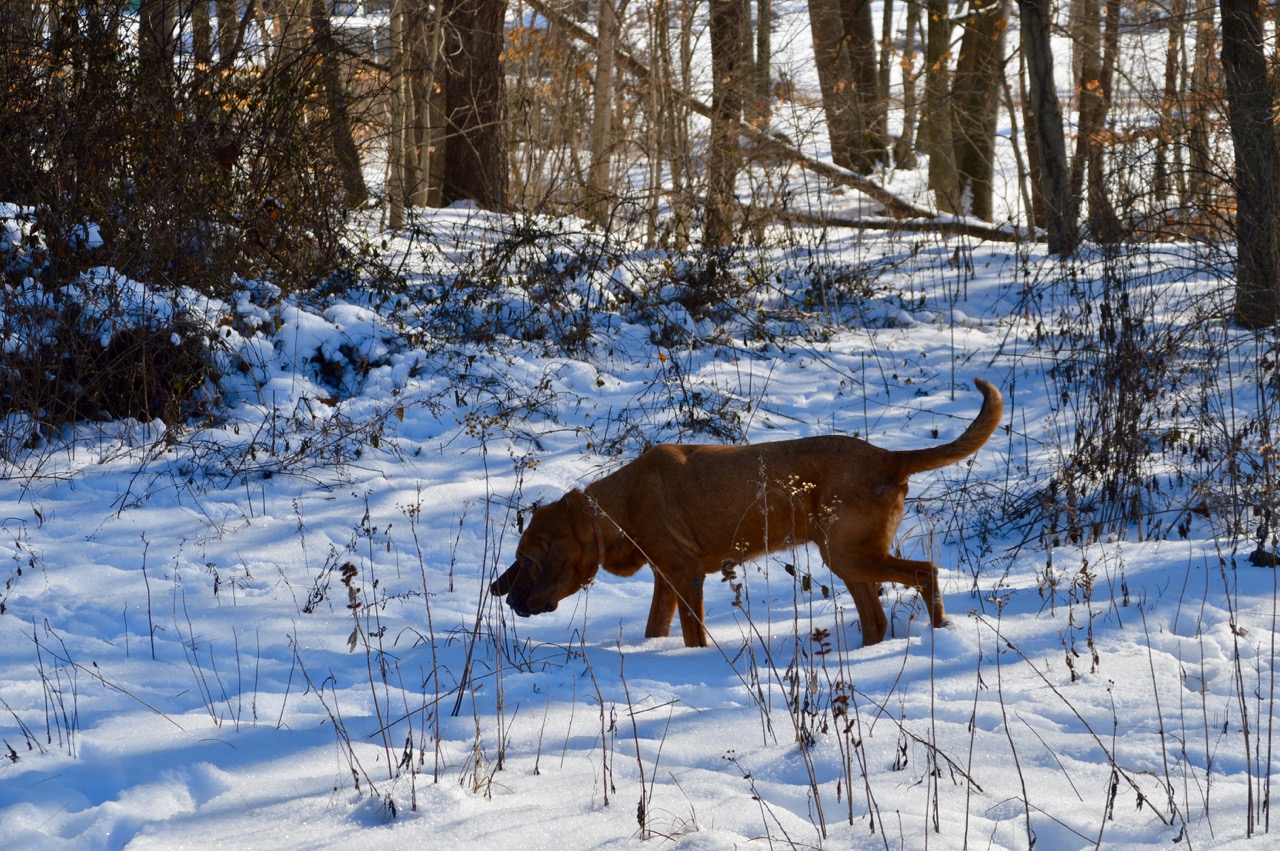 So with Sadie's constant begging to go out for a walk by staring me down, I spent my time looking  at houses for sale in Arizona and New Mexico on a different site that listed more houses than the two websites I was using in the past. I found that Trulia's listings to be much more accurate and was showing more houses with the same search parameters. 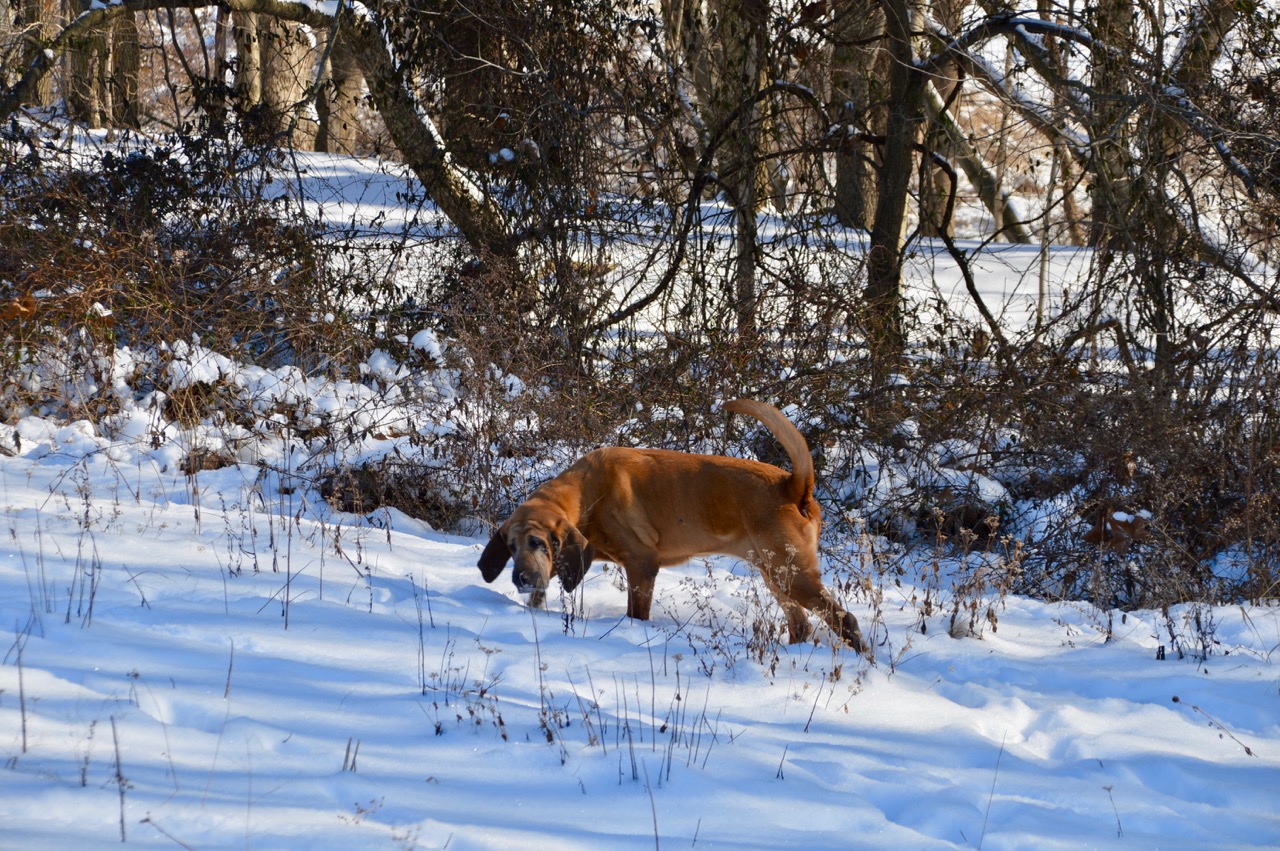 By 2:30pm I was just as excited as Sadie to get outside and attempt a walk. Our tracks from a couple of day ago were still there but almost buried by either new snow or the wind had blown snow to the point of drifting along our path.

I could tell that Stella may not be up for a walk but Sadie was 100% wired for a half miler. 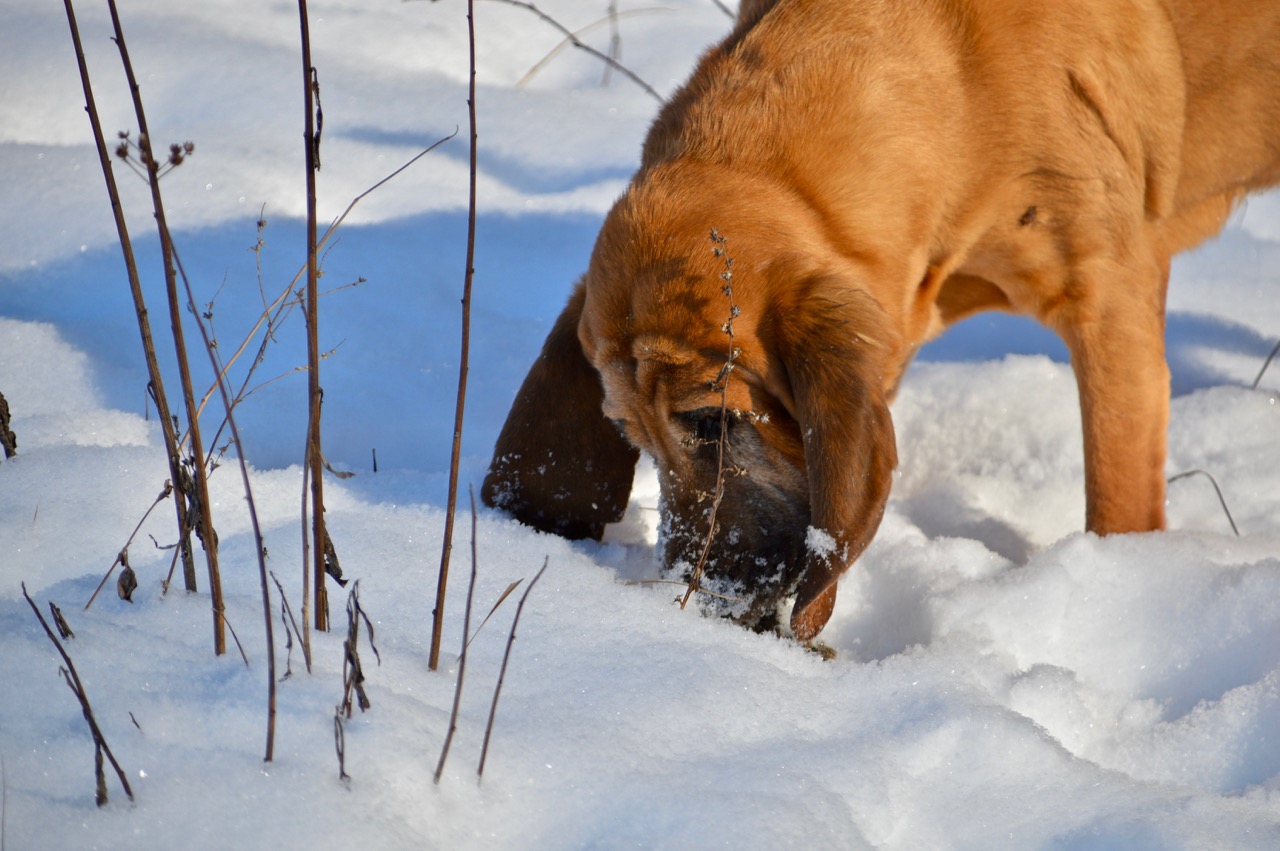 She pulled stuff out of the snow, she chased birds, ran and chased more birds. She obviously did not agree with the wind chill factor readings. 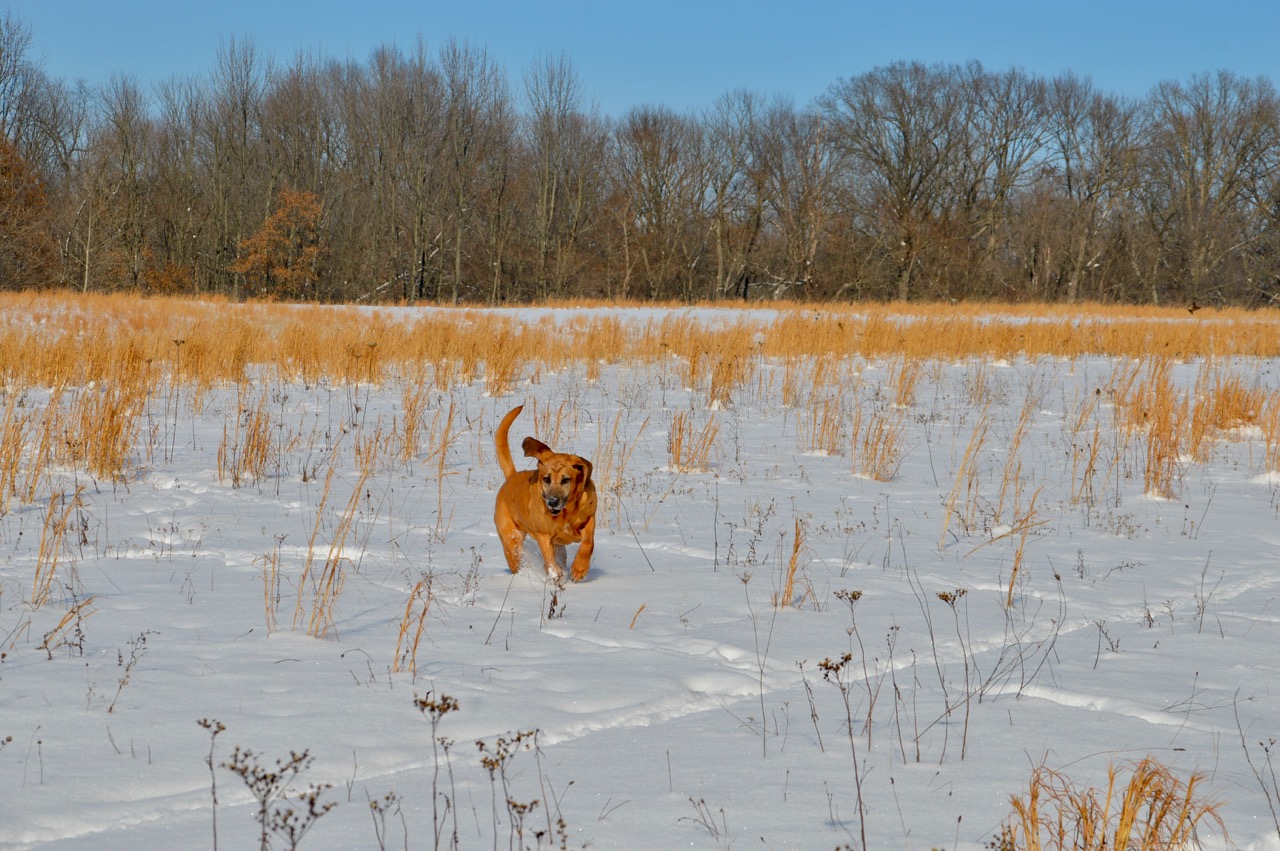 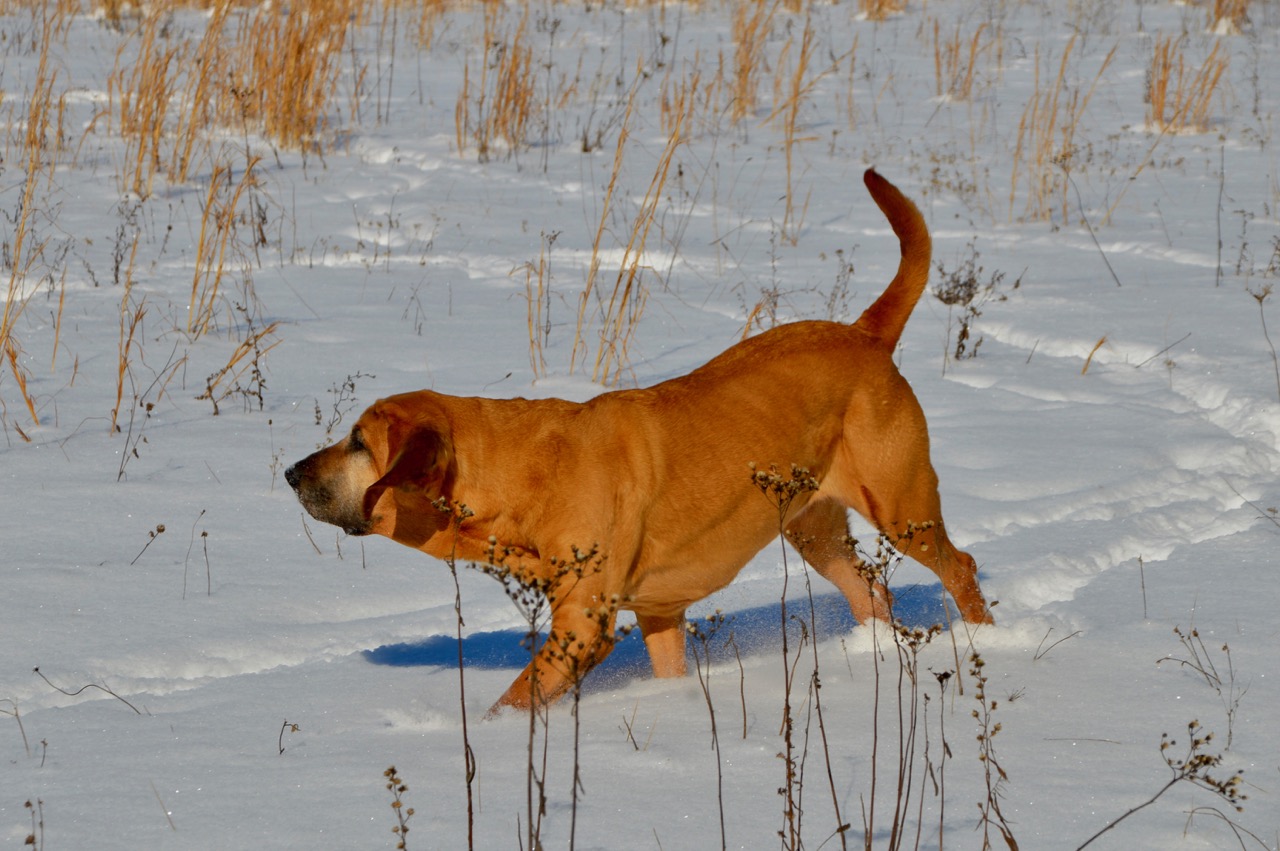 We weren't 5 minutes into the walk when I saw this. That infamous raised rear paw of Stella's. I never try to force her to walk any further when I see this ... except returning home. 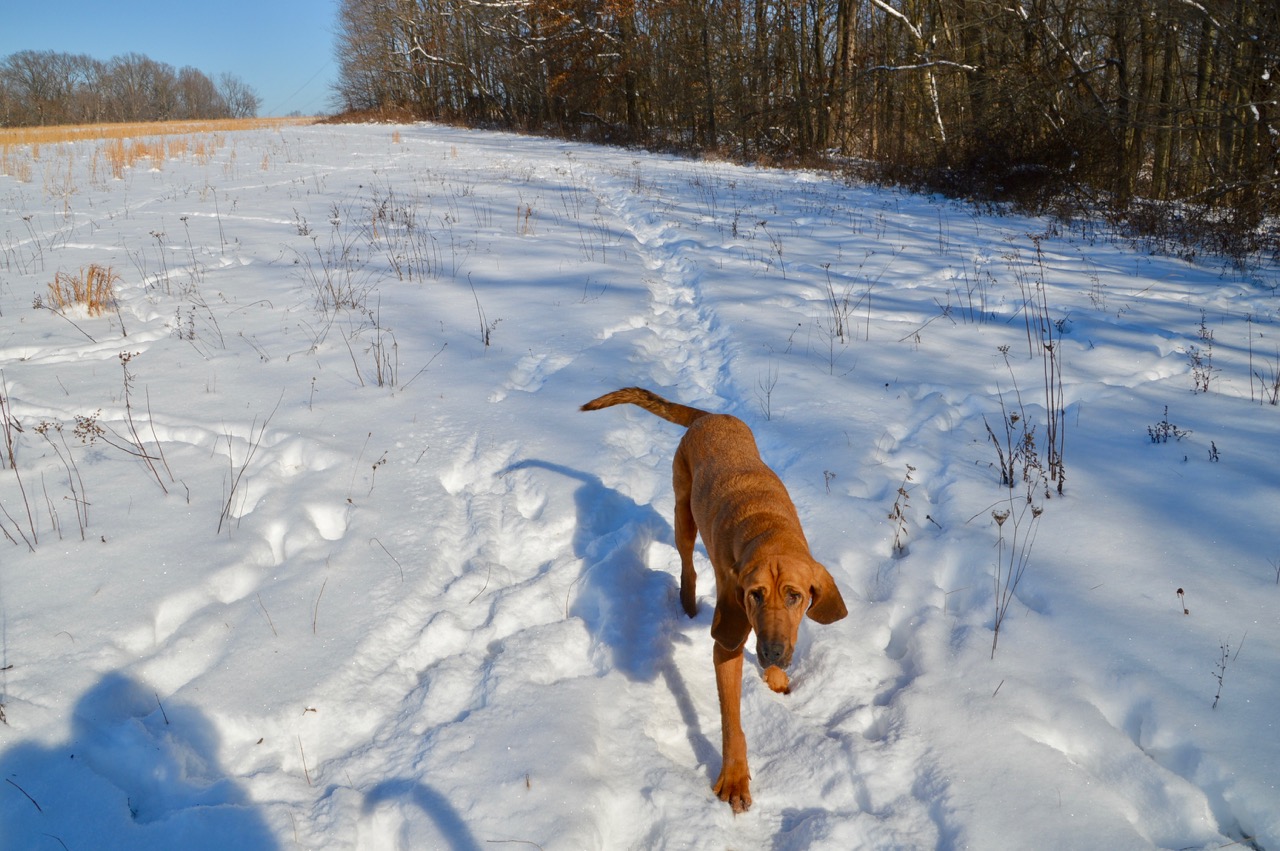 Let's just say her pace was faster walking toward the house than it was away from the house. 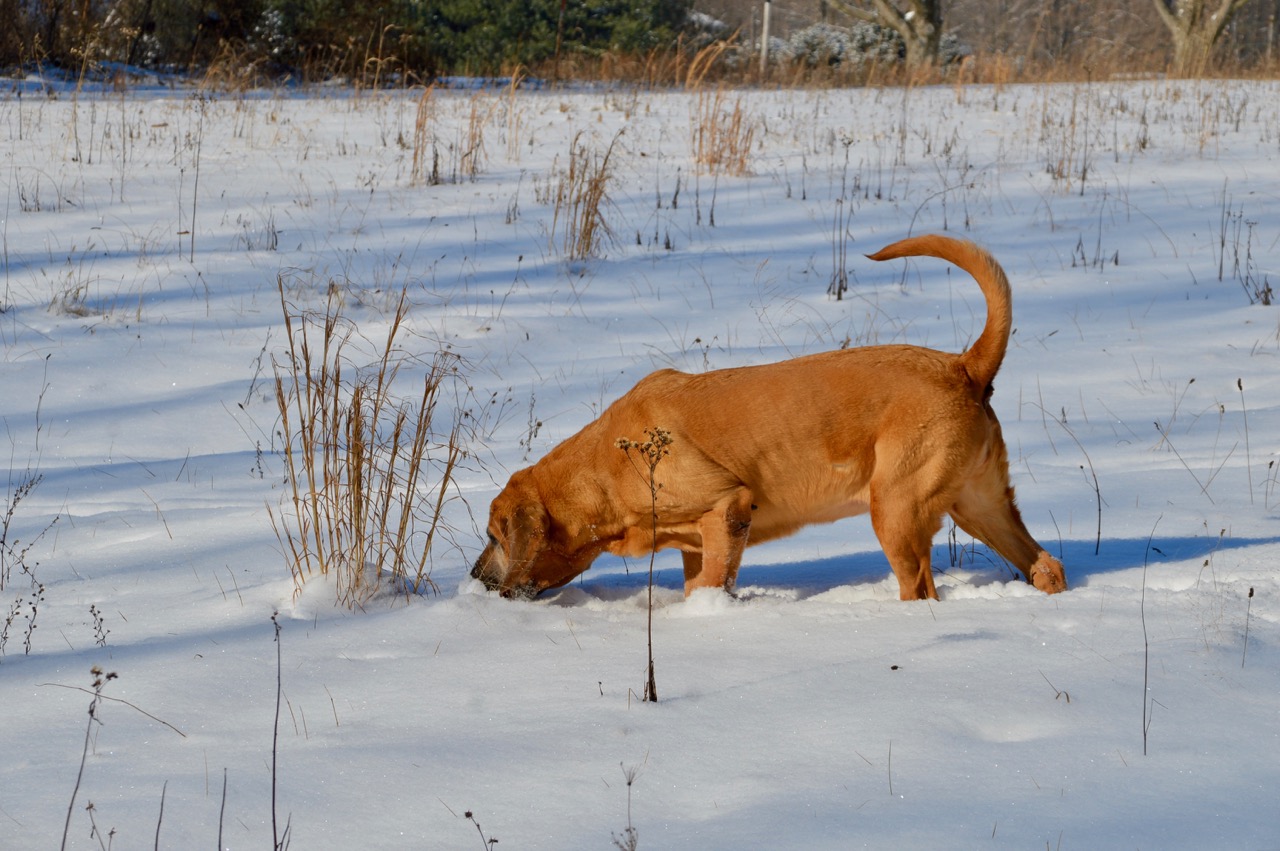 Sadie in the mean time was unaware we had called off the walk. 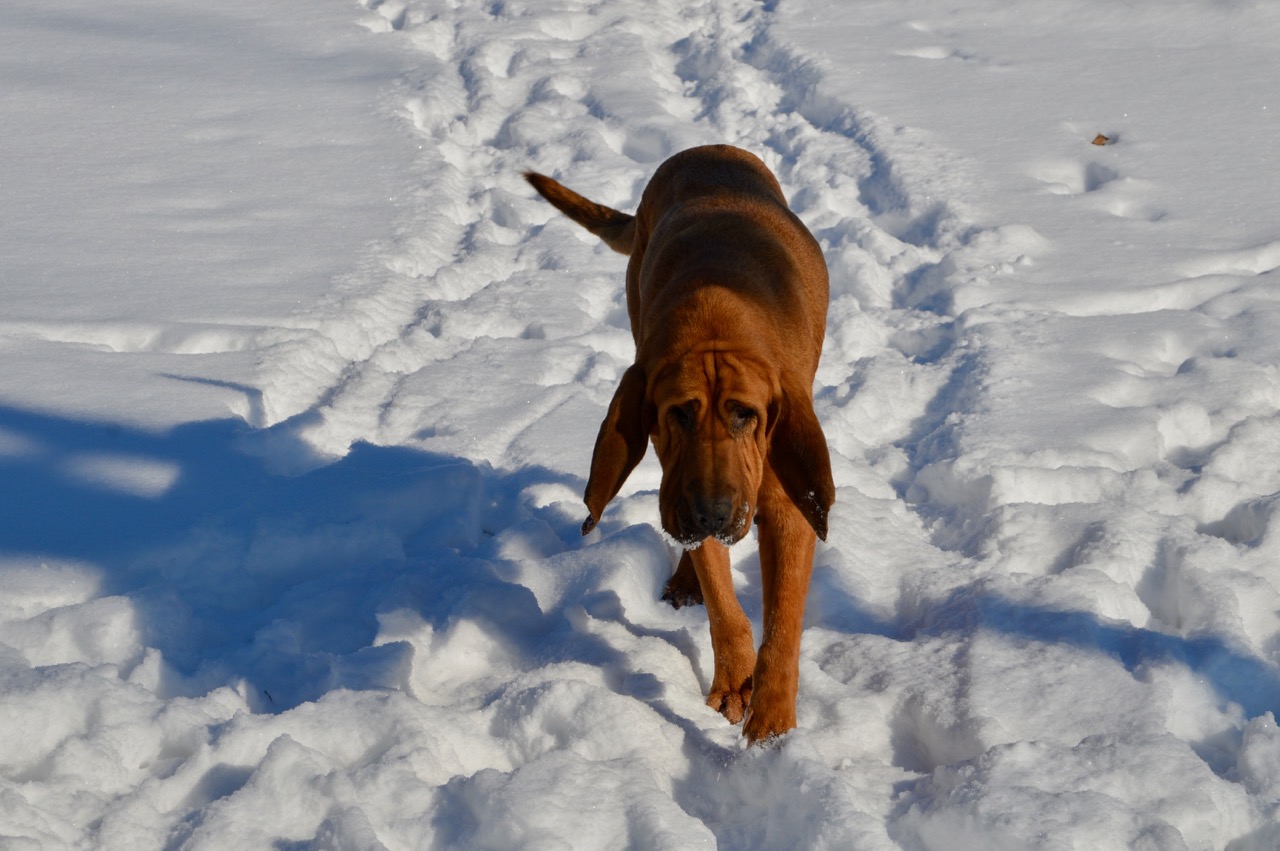 While Stella was barely able to make it through the yard. Once her paws hit that concrete floor, she trotted for the door, nudging at the door nob with her nose. She was very very happy to be back inside with a short howl and a tail wagging.

So I think it is safe to say the arctic conditions are over here in 'the tropics. All inside heat has been turned off and it's still warm inside. All the mini blinds have been opened to let that bright sunshine in and tomorrow we will start the day 20 some degrees warmer than the past 4-5 days.

I'll continue to look at property out west, analyze, think too much, go back and forth on my options and may even fit in a game or two of Mahjong before dinner.