The Hounds Lasted 3 Minutes Outside 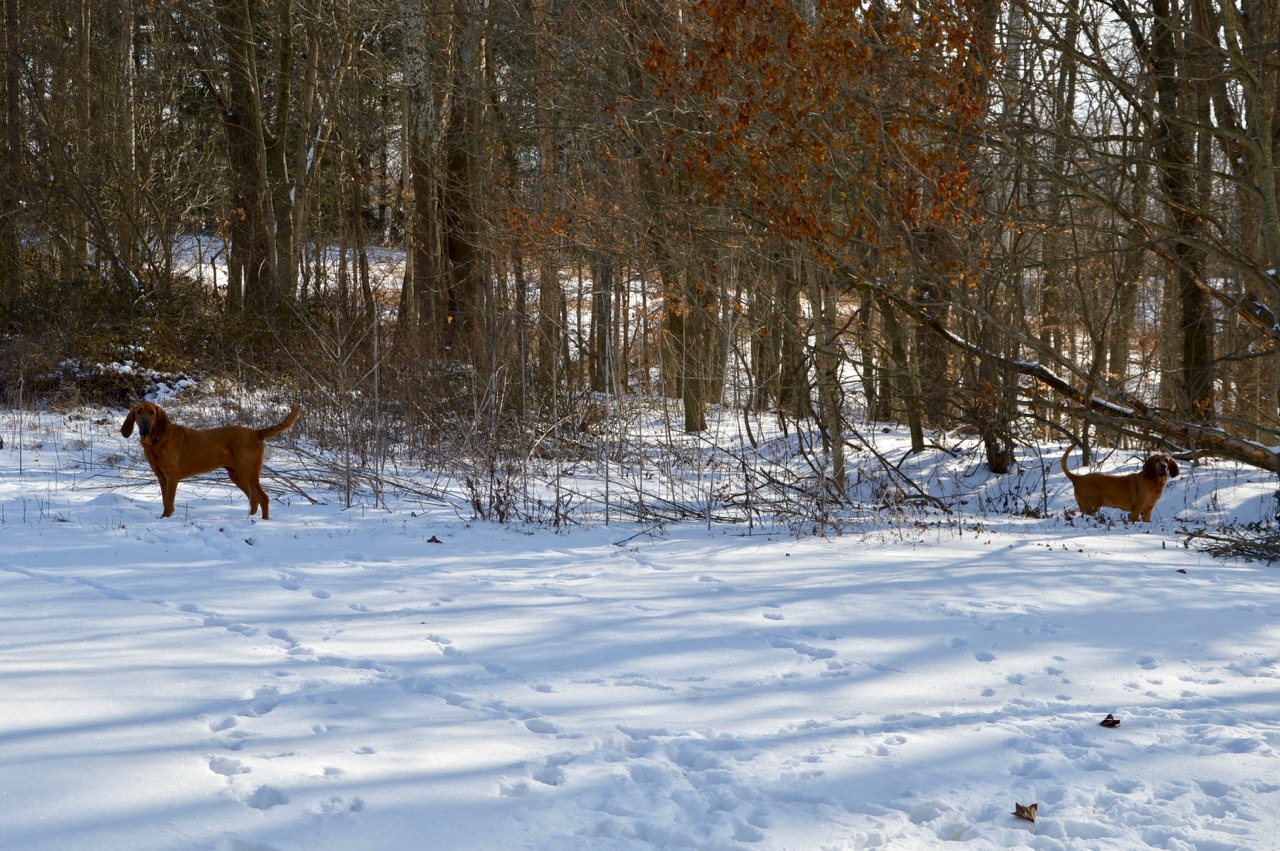 Sadie started her "stare down" at me right after her breakfast. It's her way of 'begging' to go for a walk. It happens various times during the day if I am not on her schedule. I kept telling her "we are not going outside today, it's too cold" and she kept staring. At 9:30am it was up to 1° but with the bright sunshine the temps would creep up near 20° later this afternoon. She didn't know that would NOT change my mind about taking our half mile walk. 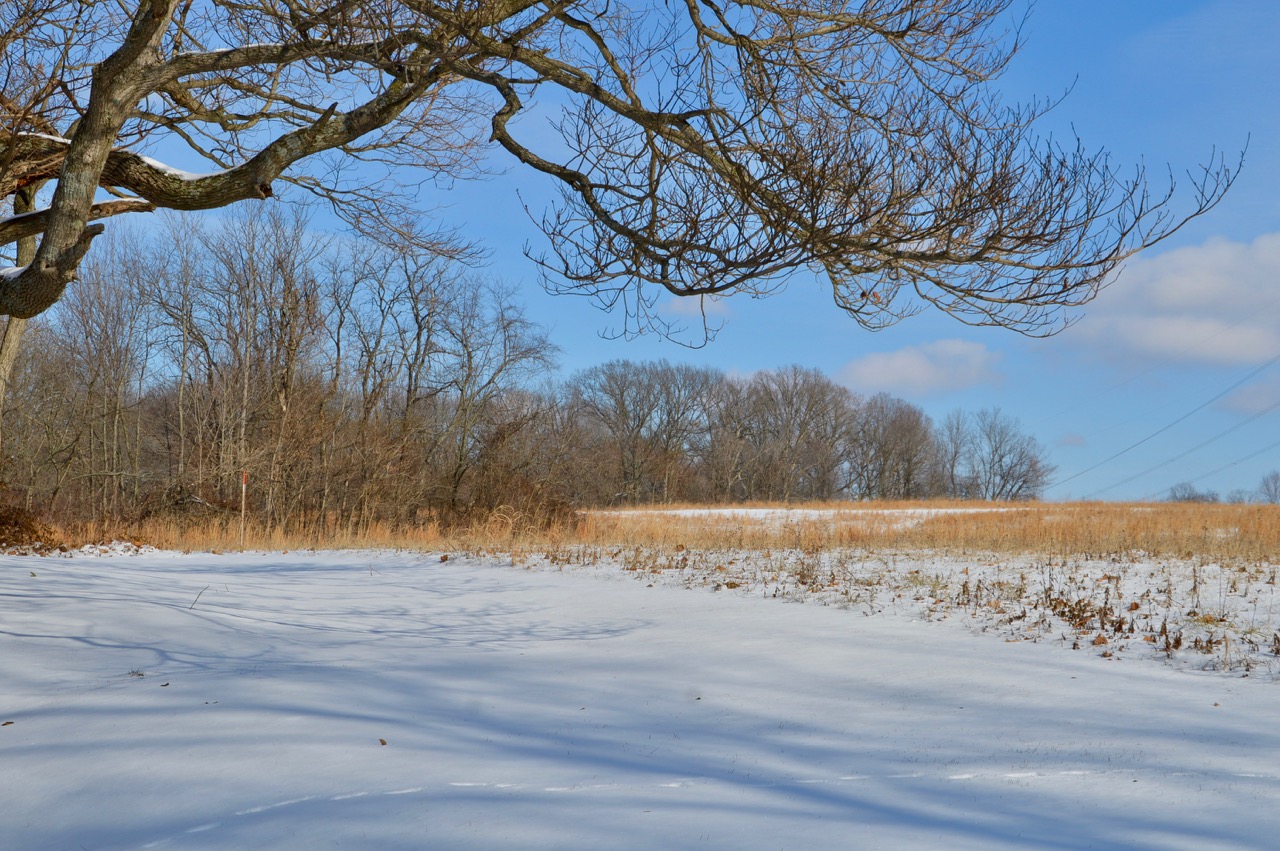 With Stella joining her later at the entry way into my computer room, it was confirmation that both bloodhounds had to go outside to dump their tanks. I glanced at WeatherBug at 11:50am and it was up to 12° with a wind chill of 5°. I decided that was warm enough for no longer than 5 minutes ... that should give them enough time to do what they had to do ... and give me enough time to take some photos to blog about. 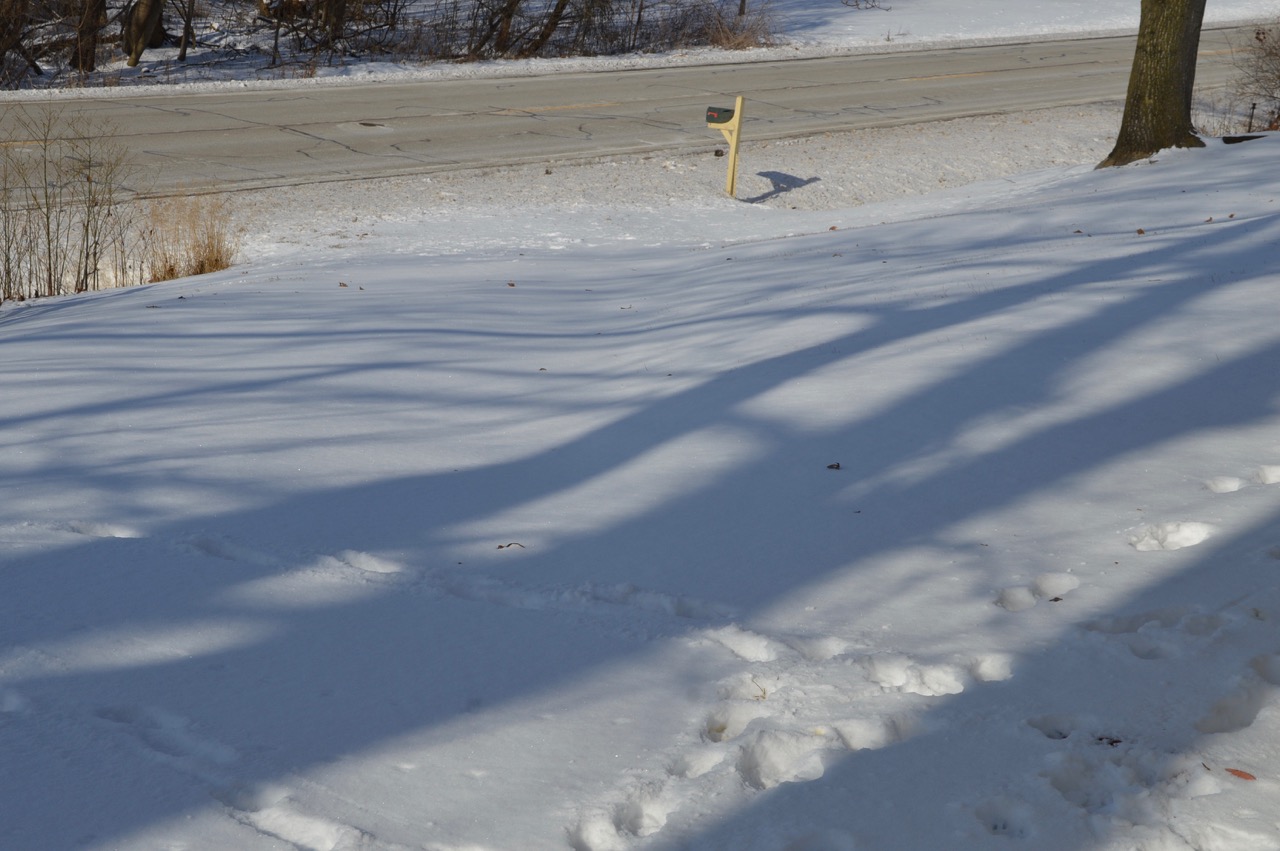 As you can see both of my vehicles have remained parked since Friday at noon. That is not deep snow by any means but I haven't had any place I really needed to drive to. This sunshine is suppose to disappear while I am inside this afternoon, watching the NFL Playoff game and an IU basketball game at 4:30pm. With that change we are suppose to see snow start falling and give us another 2" by tomorrow at noon. The deepest snow I have ever had here is 26" around 15 years ago. 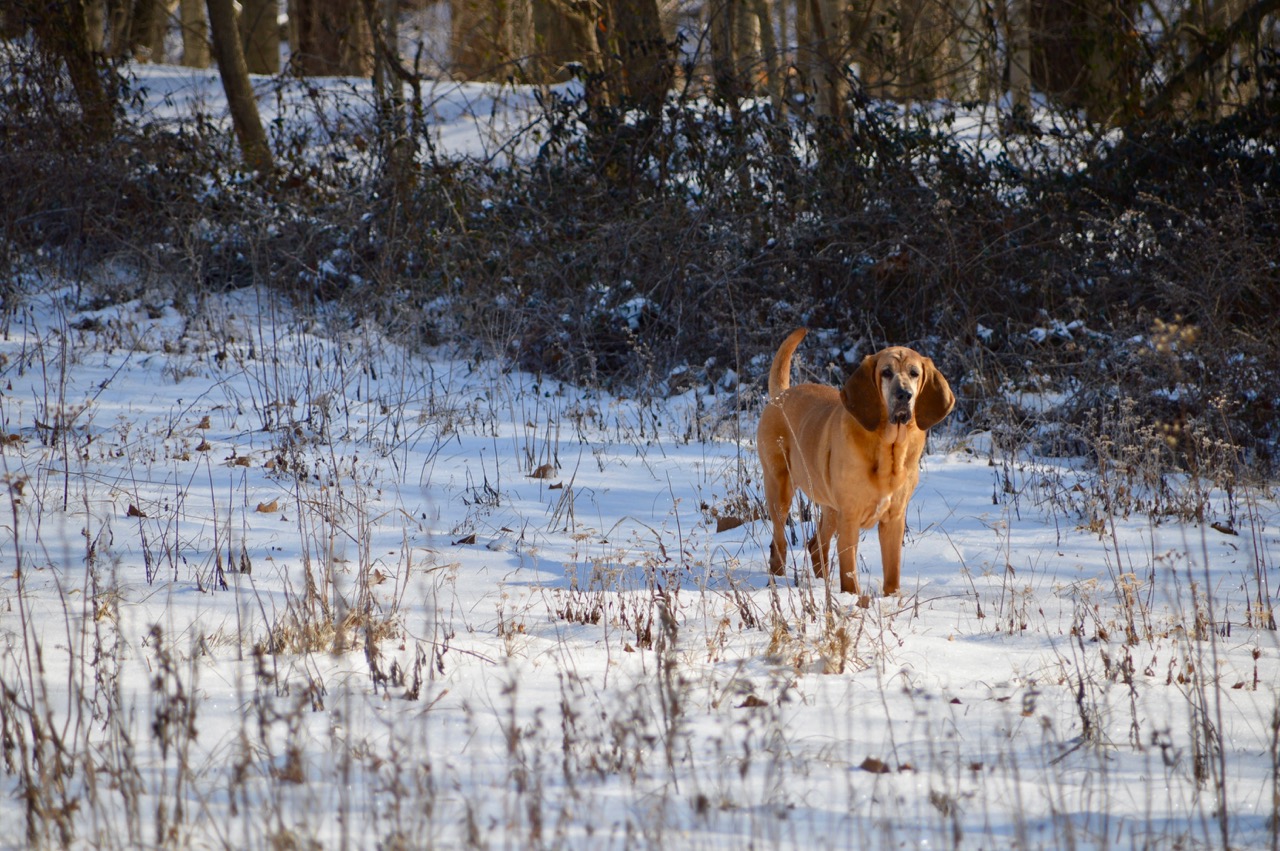 When Sadie saw me putting on the Mountain Wear down parka, she was positive we were going to walk the half mile. That is an example of her "stare down". Based on the temperatures and our experience yesterday in similar temps, we were not taking any walk anywhere this morning. I had a gut feeling that neither hound would be out very long in wether like this. There was no wind but the arctic temps cut you to the bone outside of the down parka I was wearing. 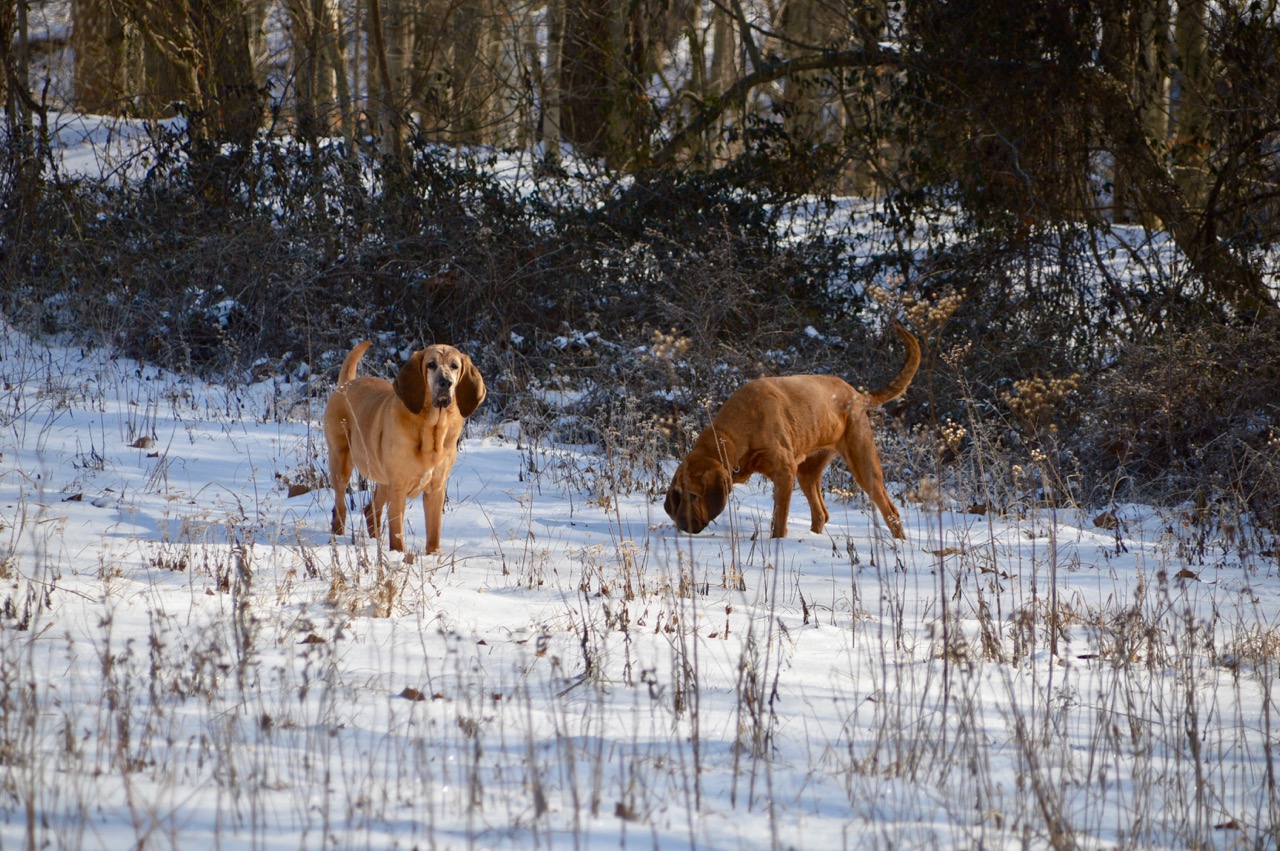 So while they wandered in the field slowly looking for that magic spot they always need to find before dumping their tanks, I stood at the back corner of the house watching them. All I could really think about was getting back inside and fixing two more cups of coffee, doubling my daily consumption. 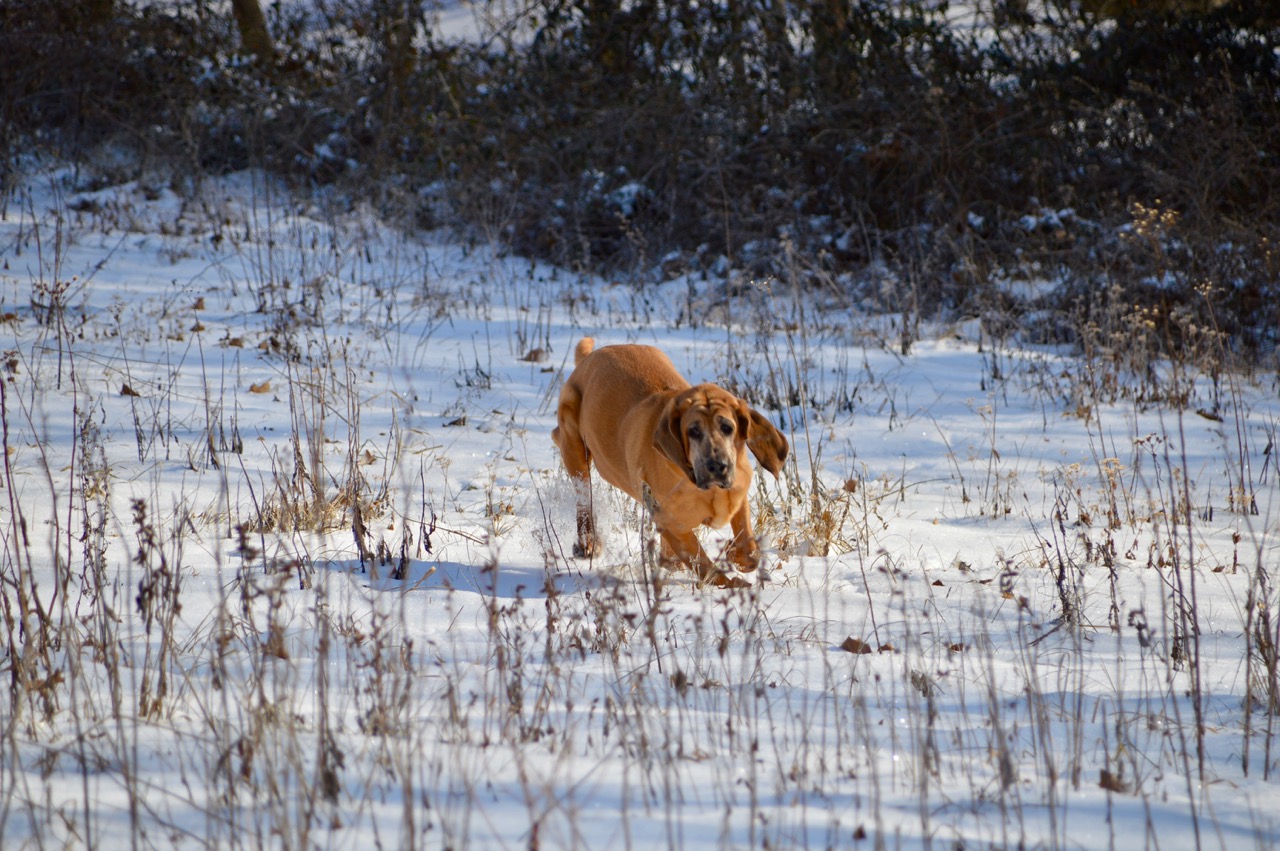 As soon as Sadie was finished fertilizing the frozen field ... she came sprinting to the house. She had enough of the arctic feeling. That is very rare for her. She is the hound that never wants to come inside. I never called her name, didn't even whisper under my breath but she came to the house on a full run. 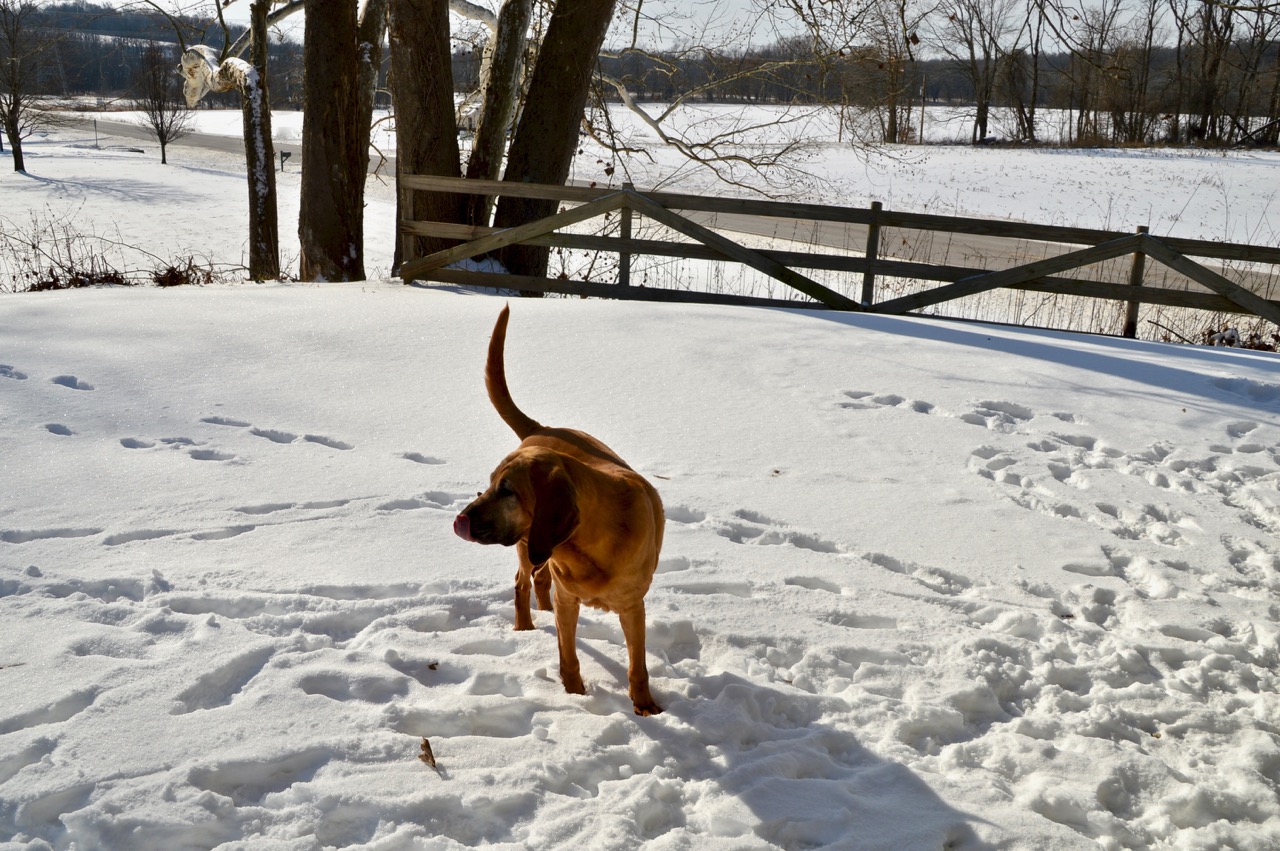 She was lucky that her tongue did not stick to her nose in the freezing temps. I am not sure she would have liked having hot water poured on her nose to get her tongue back inside her mouth. 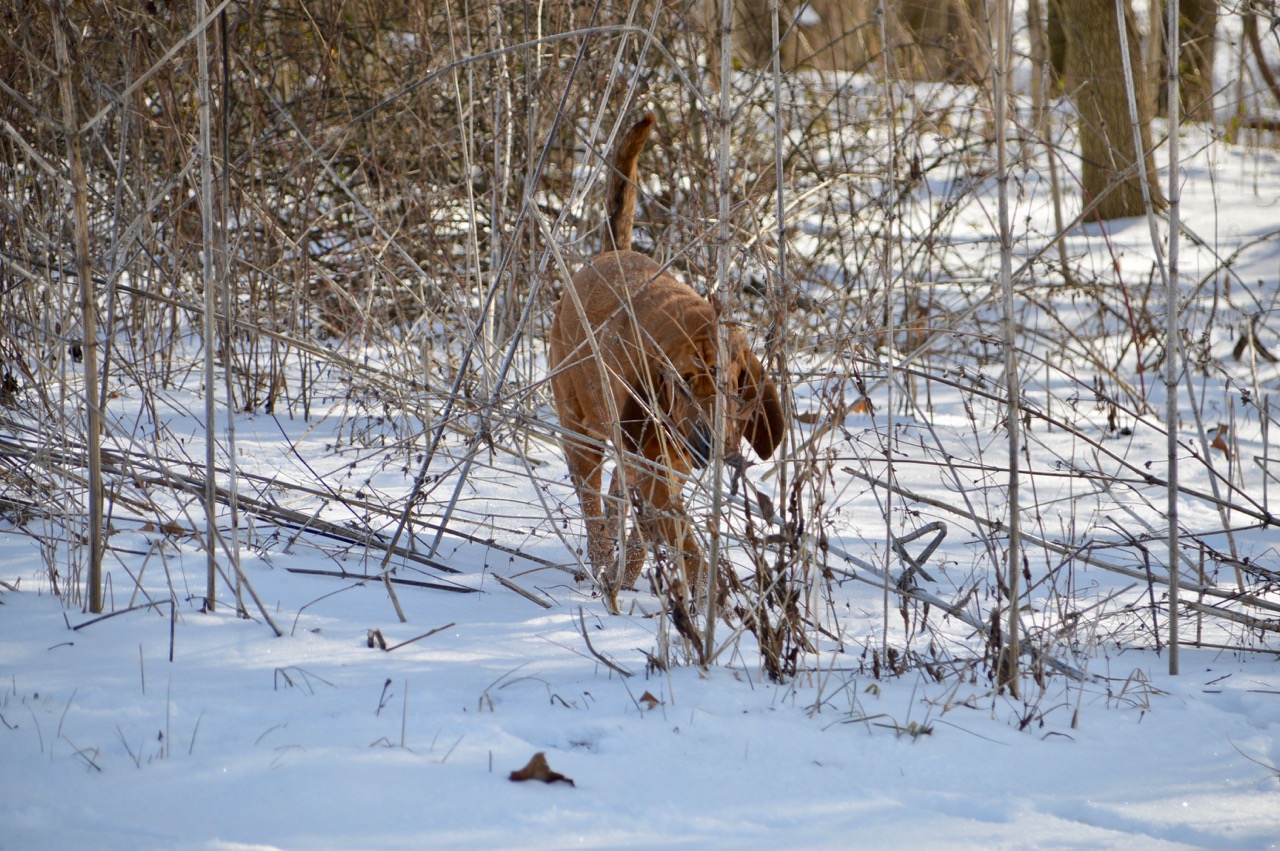 Stella took a little longer trying to find that special spot that all dogs have to find before they relieve themselves. I kept watching for her to lift any of her paws from being too cold. She didn't run as fast as Sadie when she was finished ... but she ever stopped until she nosed the door to go inside. 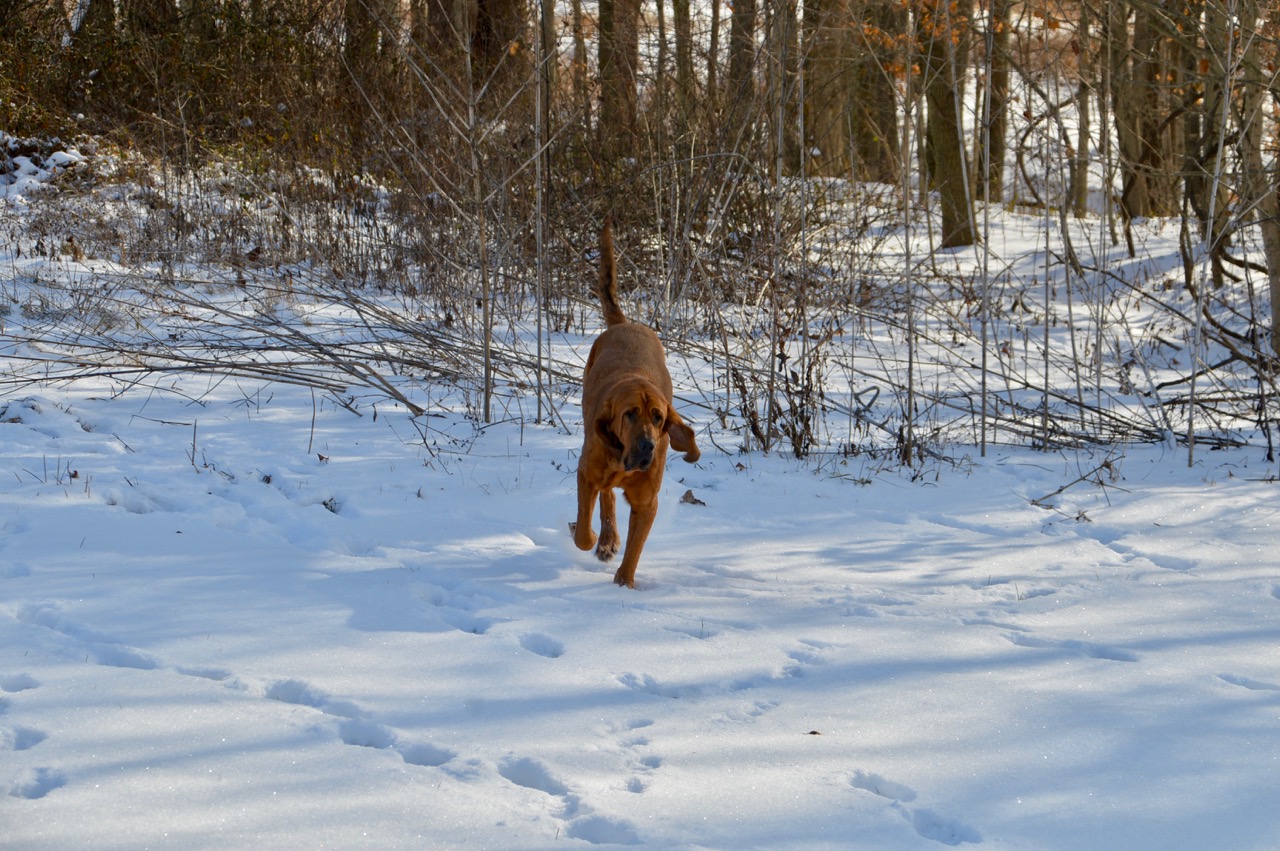 Although snow is forecasted for later today and tonight ... I have hope ... it is suppose to be 50° next Sunday. 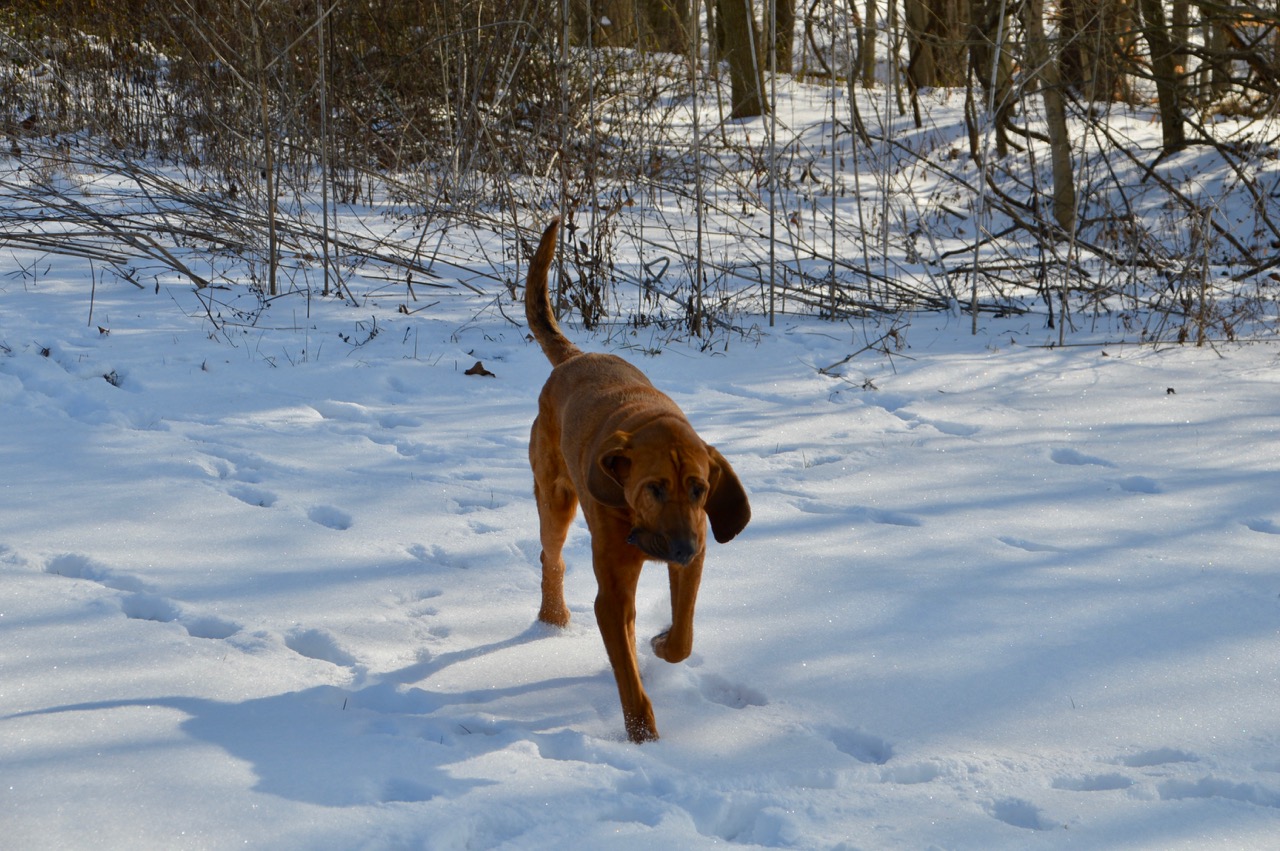 Like in the past winters, the hounds can only be pinned up inside for so long before that cabin fever sets in. While I made more coffee and downloaded these photos, Sadie and Stella started some hard wrestling along with some playful growling and barking. It was only total silence when they stood like statues staring at each other while they thought of their next move.

How did I know we were outside for only 3 minutes?

The time stamp on the image file in Apple Photos, told me my first picture of the field across the highway was at 11:54am and the last picture here of Stella trotting through the yard was taken at 11:57am.

It's pretty amazing they were both satisfied with their time outside with it being one of their shortest trips outside in their lifetime. Heidi in the mean time is where you saw her yesterday ... just substitute the photo of her in yesterday's post to this one. Nothing has changed with her and won't until the temps are back in the 40's at least.

I have 7 different towns in AZ and NM listed on my iPhone Apple Weather so I can see all the temps/weather of each town including where I live ... makes me wonder if a move is not in my future.

Another beautiful day here in 'the tropics' of Southern Indiana.
at January 14, 2018