We Have Traded Snow For Rain 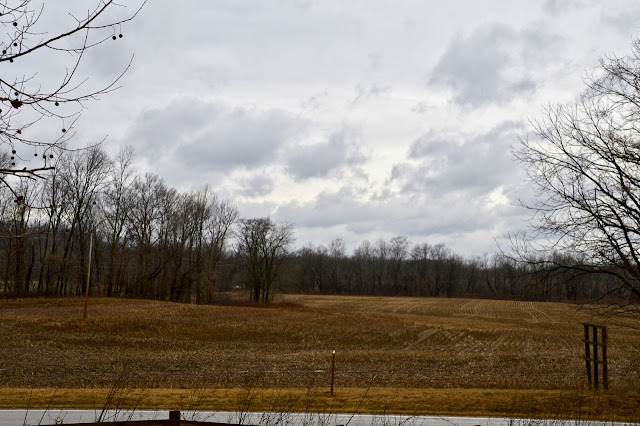 Since I last posted there have been a LOT of changes. It's warmer and that's a good thing. ALL of the snow is gone. It's very really windy, the field is too saturated to take any walks and there is standing water in the gravel driveway in places and in the backyard. All is good and as soon as the field gets a little dryer in a day or two ... the hound walks will resume. 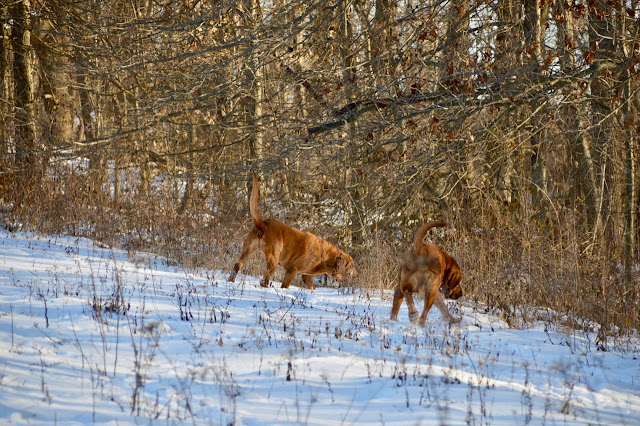 It was warm enough on Saturday where Stella joined us to take the complete walk. It looked like the snow was about half of deep as it was on Friday. The temps had been over 35° that afternoon and all night. I was happy with the change and the hounds were happy. 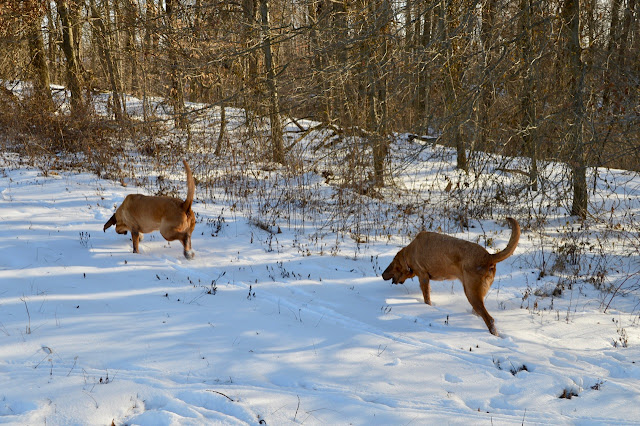 Stella was more than focused on scent instead of food supplements. She kept her nose to the ground just like Sadie for most of the walk. 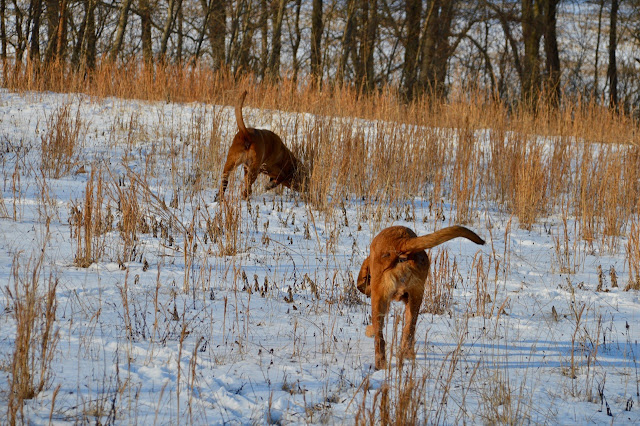 The higher we got in elevation and further back in the field, the wetter it got. There was more standing water and it was starting to come up over my boots, not just along the sides with each step. Water trails followed Sadie's running paws. I could see that I would have to towel dry her stomach off as well as Stella's once we returned home. 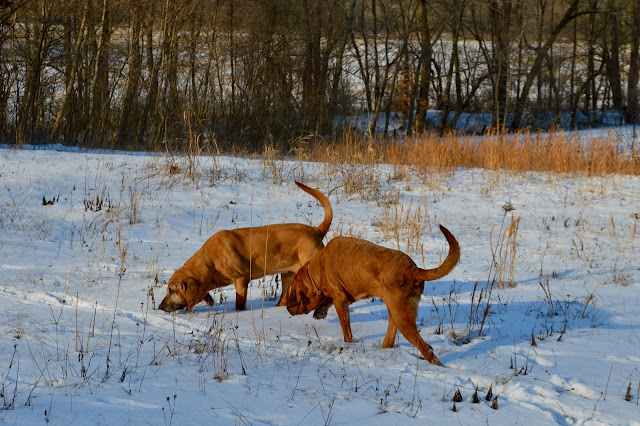 As we headed back to the house toward the end of the walk, the hounds checked out more deer tracks that went toward the highway running along the north side of our property. The temperature was perfect for this walk. 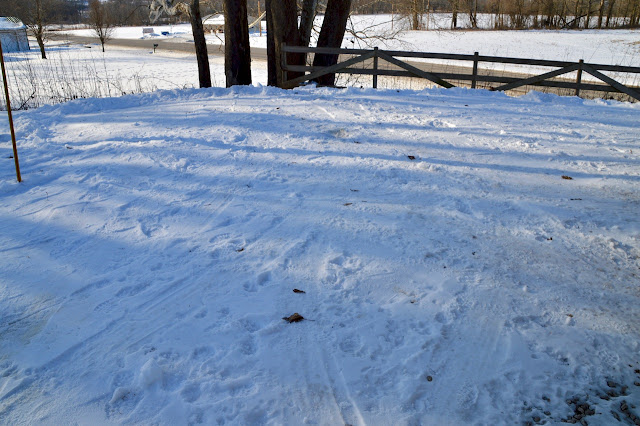 Not that the sunshine was that hot but I knew with the sun out and the temps higher that snow would be melting. I wanted to help anyway I could so I took the snow shovel and slid the moist snow toward the edge of the driveway bank. Snow was a little over 4" deep. My drive was level again on top of the drive ... the other 80' down the hill and to the driveway, I would let the sunshine do it's own work. 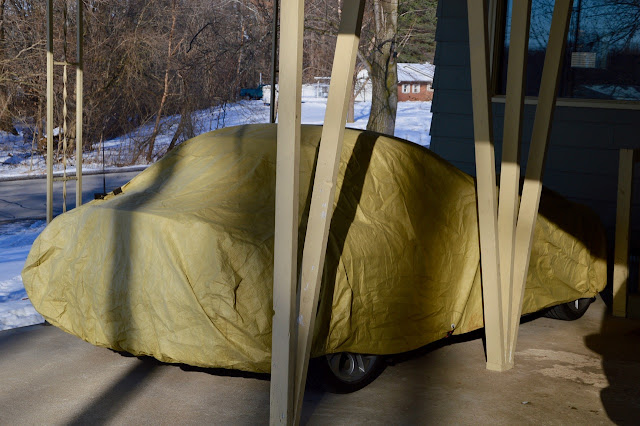 With rain forecast on Monday ... I put the car cover back on the Z4. I doubled check around the bottom edge of the soft covertible top and made sure it was dry where all of the snow was packed just a few days ago. It does not take that long to take the cover off and roll it up as I take it off ... take a drive ... the put it back on when finished, just like all the other winters. 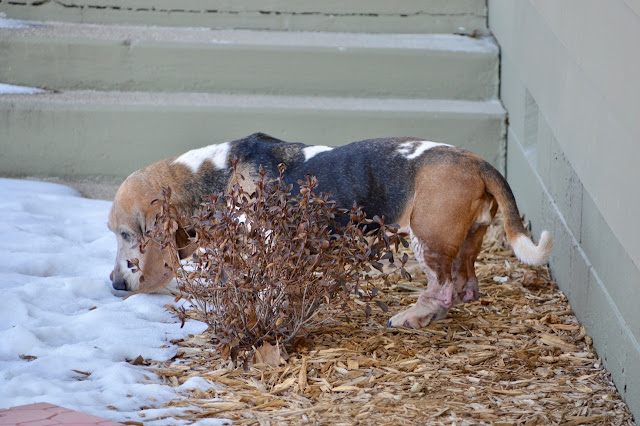 With the temps above 35°, Heidi made a longer appearance than normal during the freezing weather. She did NOT go out into the snow still left in the front yard but hugged as close to possible against the house as she checked things out. 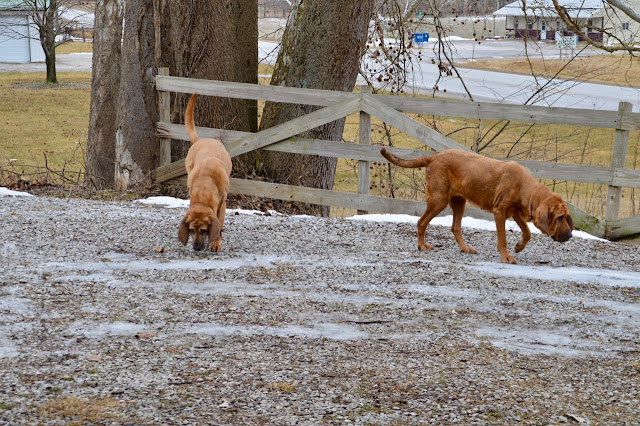 By Sunday morning my shoveling the day before helped the snow disappear to where most of the driveway was once again visible. You can see in the background that basically the snow was gone ... hopefully for this winter. 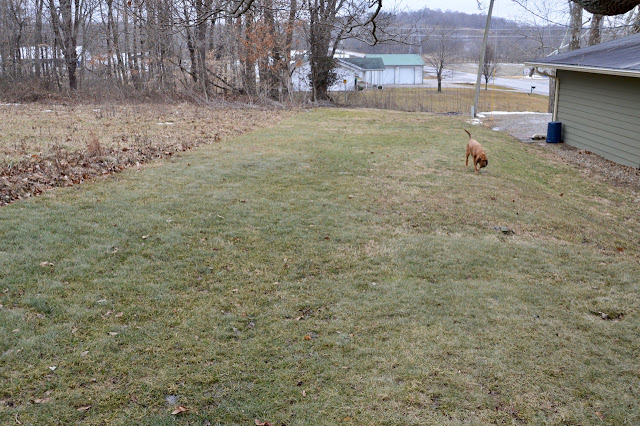 This was 24 hours after I had a yard full of snow ... hard to believe it disappeared that fast but I'll not question the how or why ... it's gone and it's good. 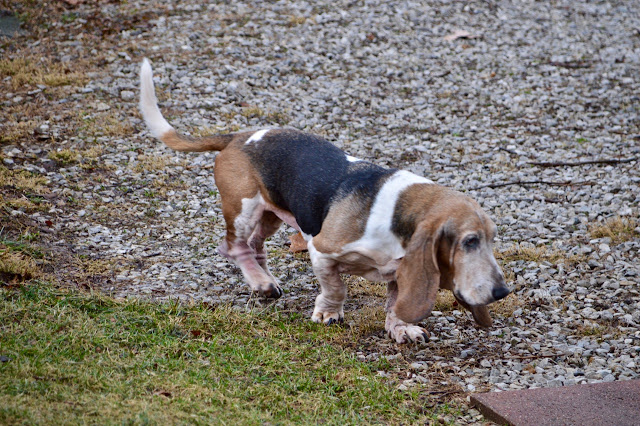 Sometime during the night I thought I heard loud wind, very loud wind. Then I heard rain hitting the storm windows ... the rain had come and it had storm velocity. I could hear Sadie snoring on her bed in the corner of the room. Stella doesn't snore but breaths loudly when in a deep sleep. I was happy they were not begging me to wake up so they could eat breakfast kibble.
Like I said earlier, it will be a day or two before we can walk. The short trip that Sadie took out to the middle of the field at lunch left mud stains about an inch above her paw. Stella had no urge to go that far out ... it's too wet for her. Heidi of course never got of the mulch in front and the gravel in the driveway but she inspected the perimeter. 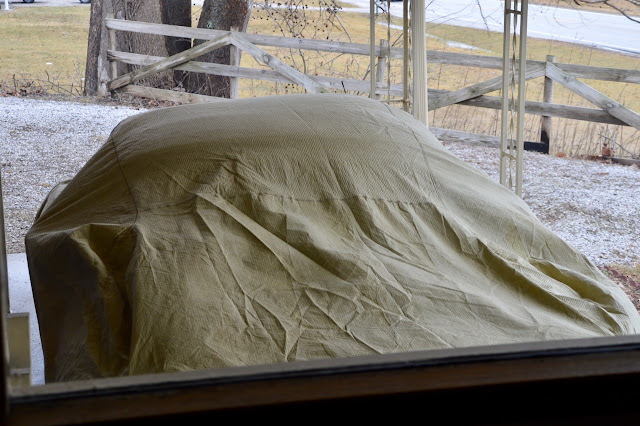 The camera didn't catch the movement of the car cover but the winds are between 20-30 mph and this car cover is flapping in the wind. I learned years ago to pull a bungee cord under the car to connect to both eyelets in the lower center of the cover, to keep the car cover on the car.

I did turn the Z4 on and let it idle a little on Saturday after sitting in the single digit temps.

Not a lot to blog on. One change I am going to do on this post, I am going to leave the photos alone as they loaded. Google Blogger does compress the images, taking away some of the sharpness ... last year sometime I started going into the html and changing the size back to the original size for a sharper image. Tom commented on my last post that my blog was using too much of his data when it loaded ... so hopefully this will fix his data usage problem.

Windy, rainy beats freezing and snow here in 'the tropics' of Southern Indiana.
at January 22, 2018