The Hounds Are Back To Normal 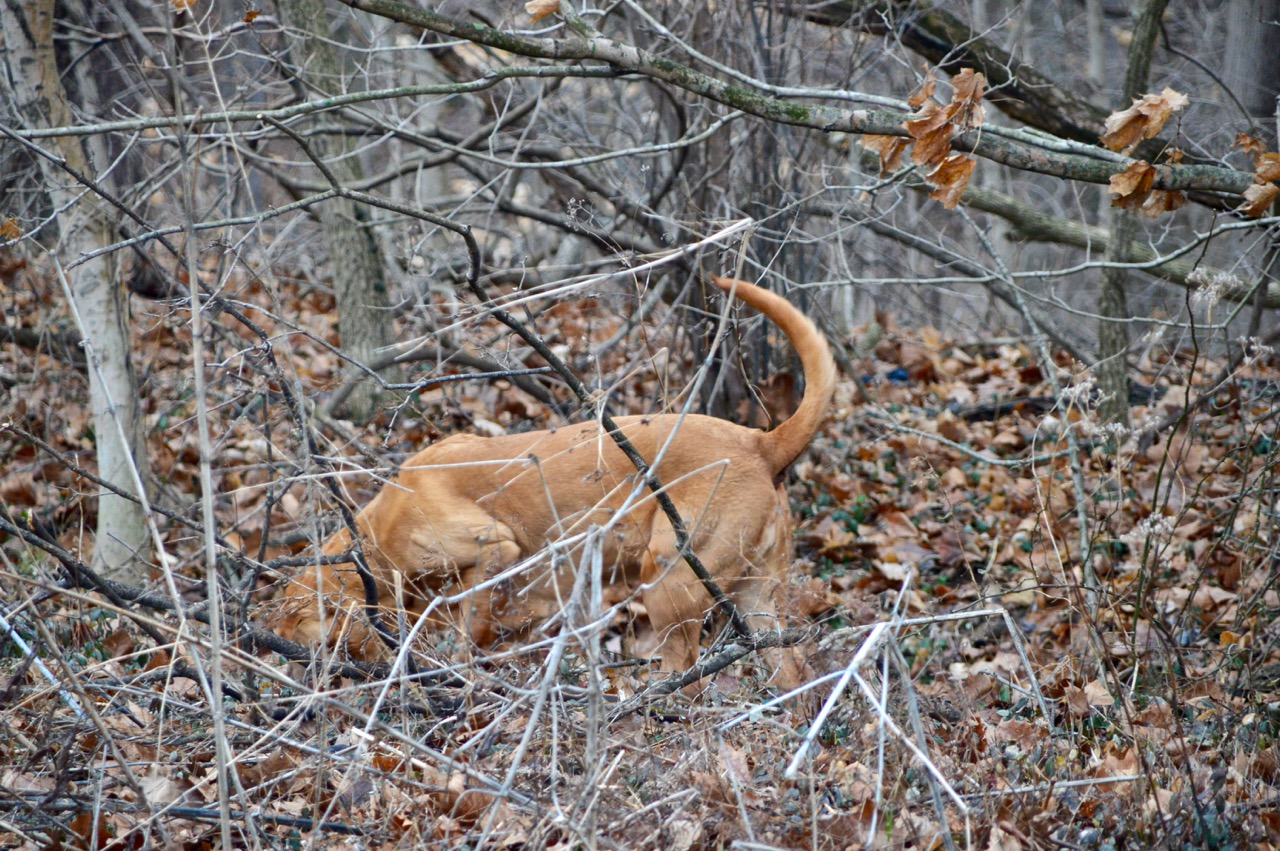 It didn't take long for things to feel like they were back to normal, me included. Sadie and Stella want to walk all the time. Sadie, Stella and Heidi want to eat all the time. It is still not warm enough for Heidi but I really believe if I were to let the bloodhounds out on their own, they would spend most of the day in the field. 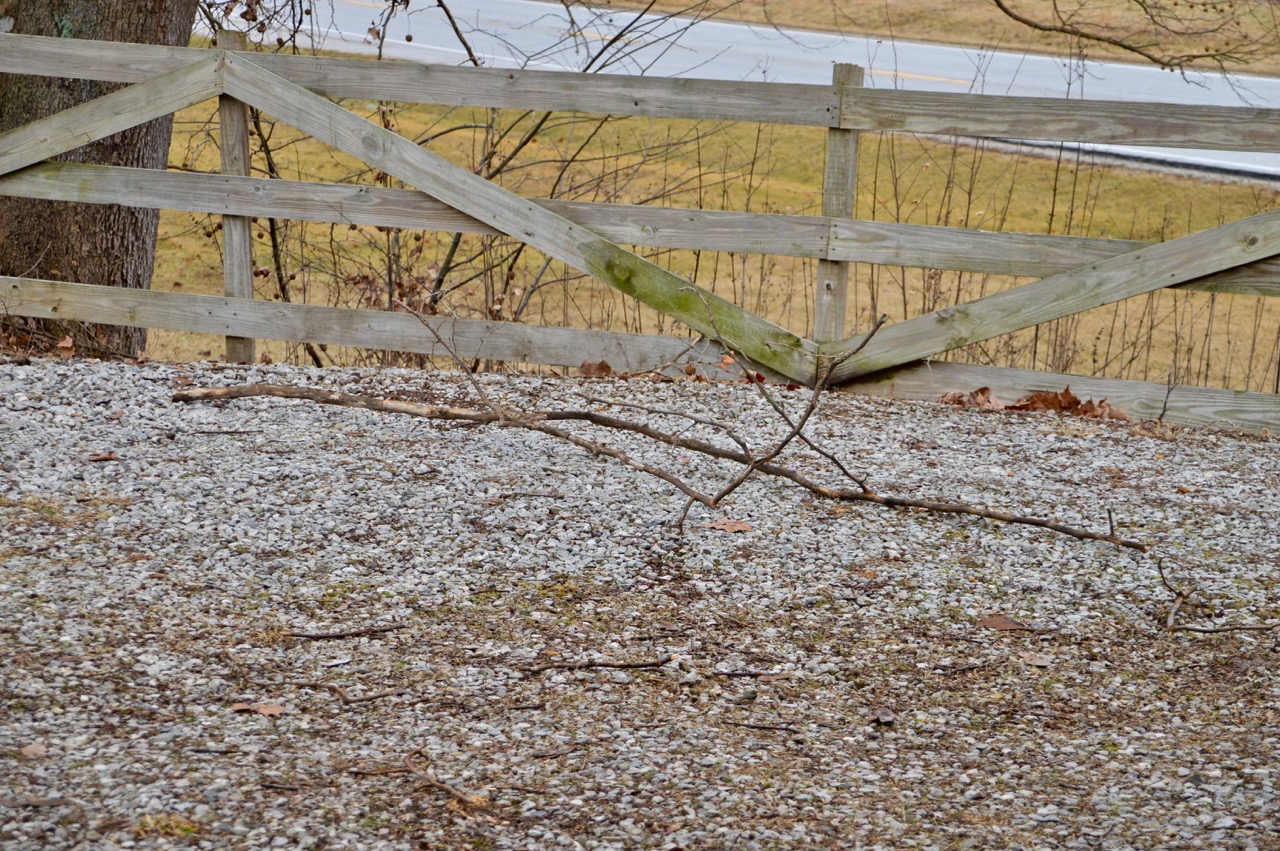 Strong winds for around here were forecast last night and they arrived. Since all of the storm damage with huge trees blown out of the wet ground in June 2008, I am always a little anxious when the winds get around 40mph. I still have huge Sycamore trees due south of the house. The Sycamore tree in June 2008 was just as tall and was pulled out of the ground like a weed, falling through the fence and all the way across the front yard.

Yet, those were straight line winds in 2008 and last night wasn't nearly the same speed. So about all the damage I found in the yard from last night's wind was this small tree limb from the Sycamore tree. If there were any other limbs in the north or front yards, they had been blown out of the yard last night. 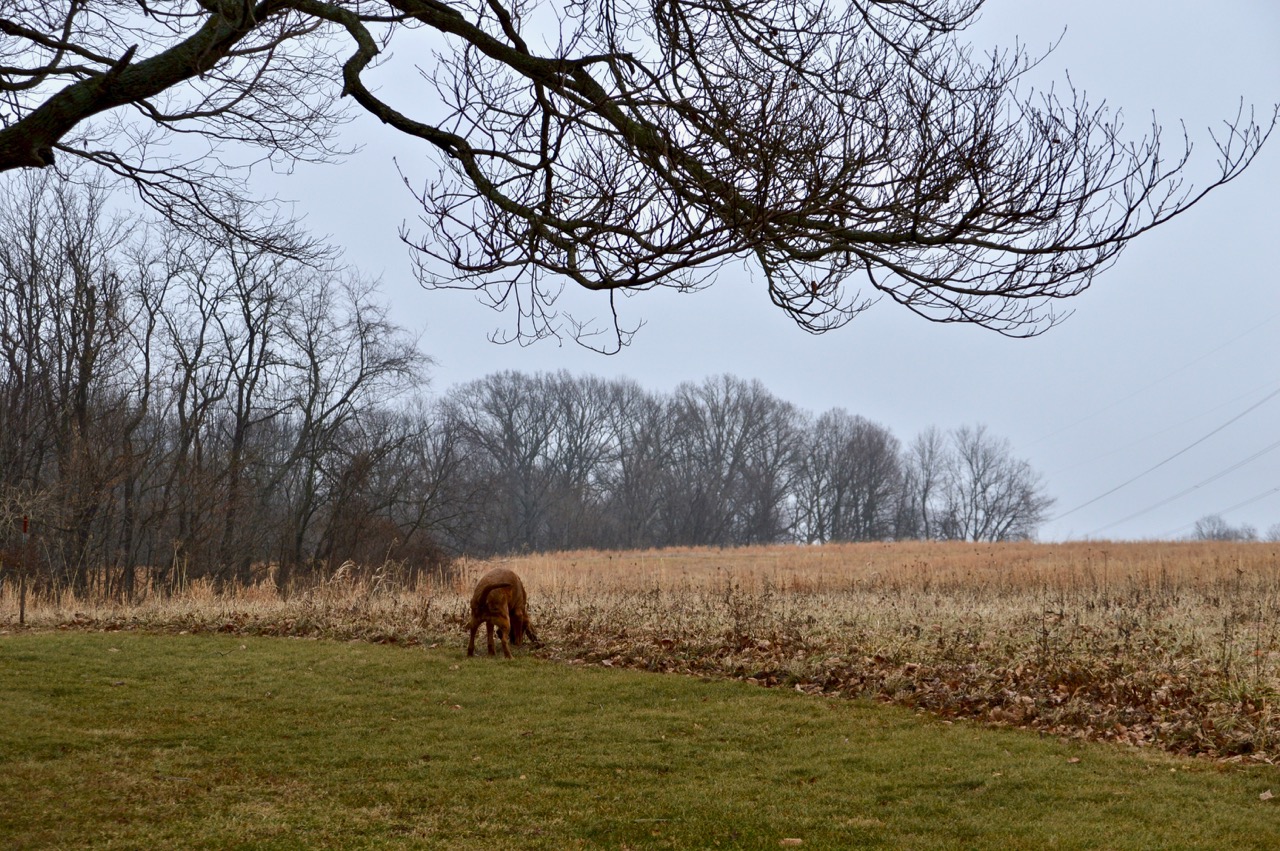 Stella wanted to let me know that she was back in control since the frozen tundra was gone. While Sadie headed south, Stella headed north ... that's never a good way to start the daily walk. Until she responded to me yelling her name, it looked like by her pace she was going next door to check out the neighbor's backyard. 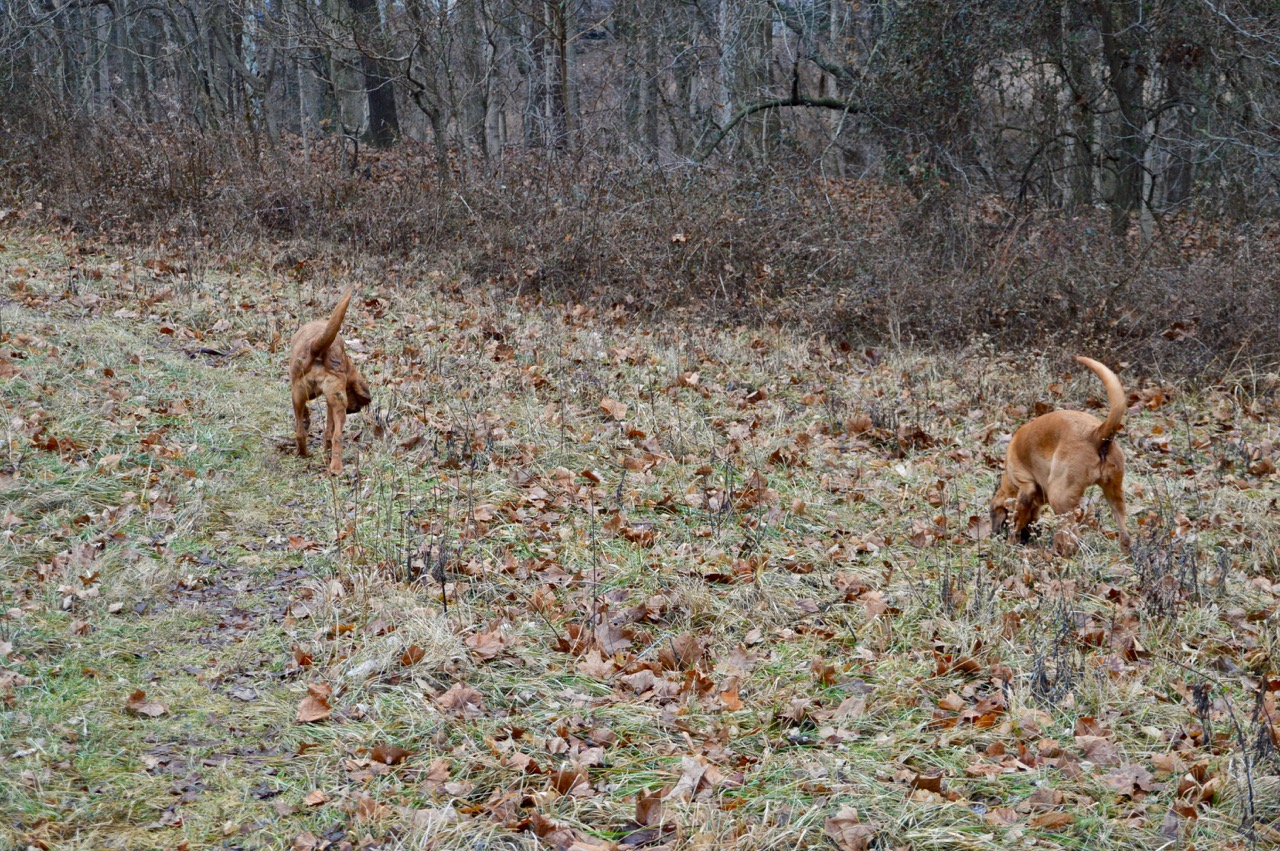 Granted, we took the day off yesterday from walking so the field would have more time to change from a muddy field to only a wet field. With almost 2" of rain in addition to 4" - 6" of snow melting I was somewhat surprised there wasn't more water this morning being squeezed from the ground with each of my steps. 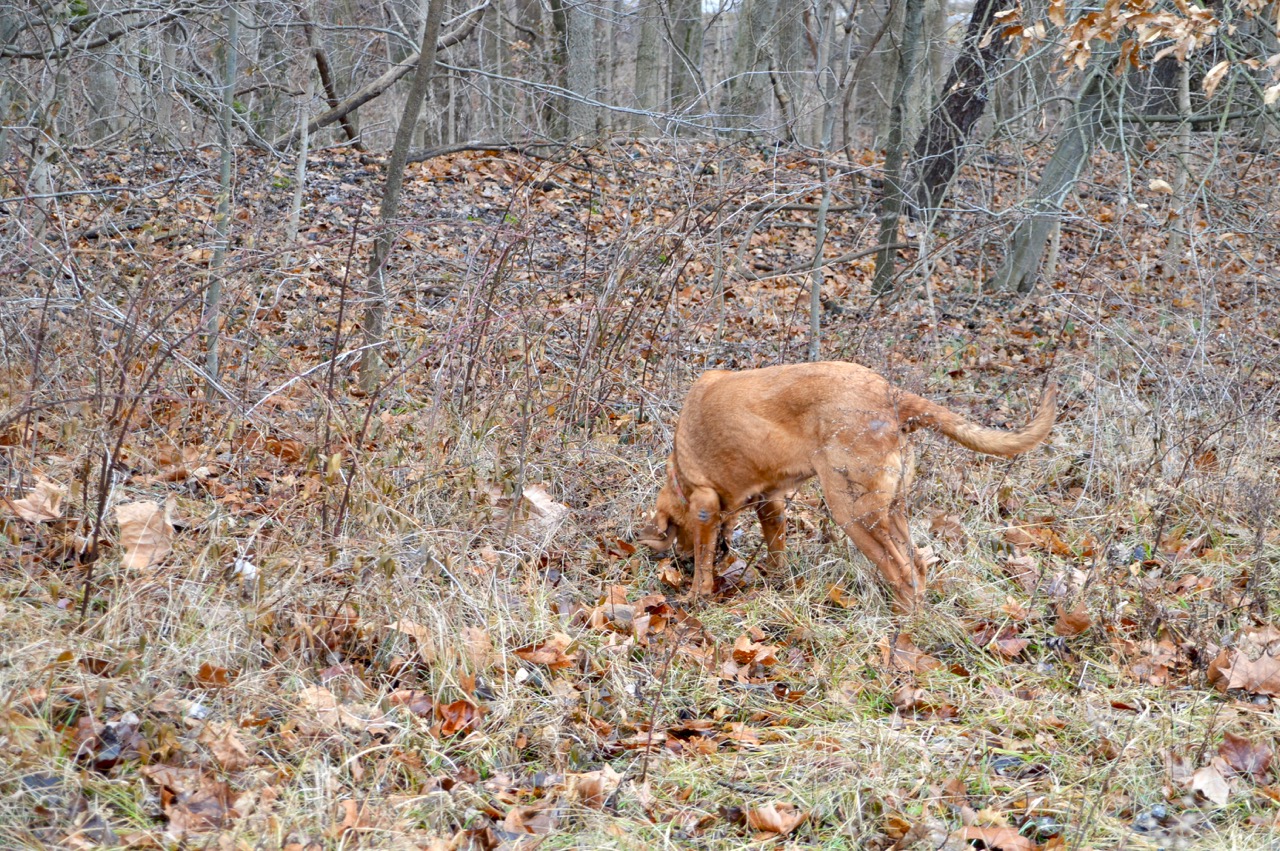 I could tell a lot of verbal herding was going to take place today, if both hounds were going to finish the walk. 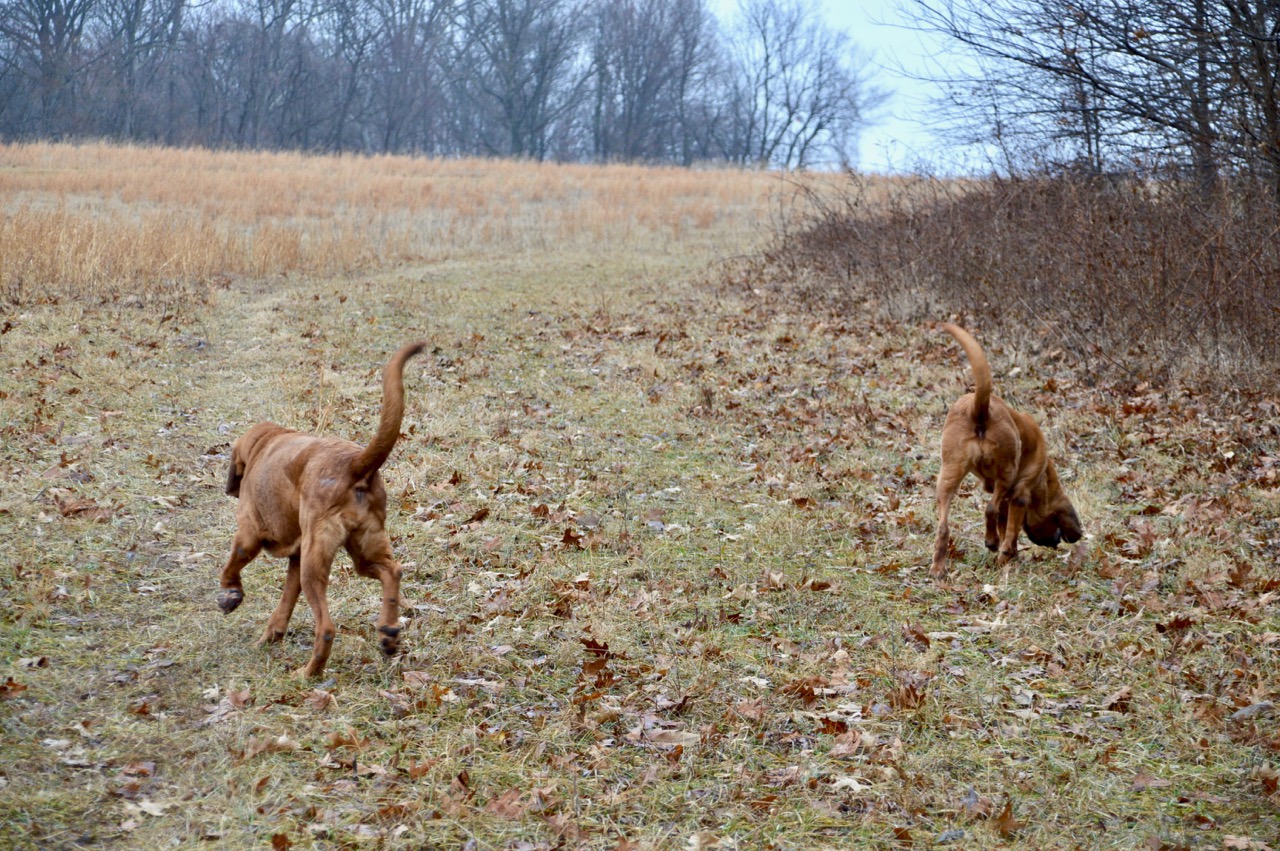 With the winds howling from the SW around the 20mph mark, I could feel freezing cold air hitting my face although the temps had jumped to the mid 30's. If it were to stay like this the rest of the winter I would take it. The forecast shows it will be 40's and 50's a lot of days in the next 45 days. 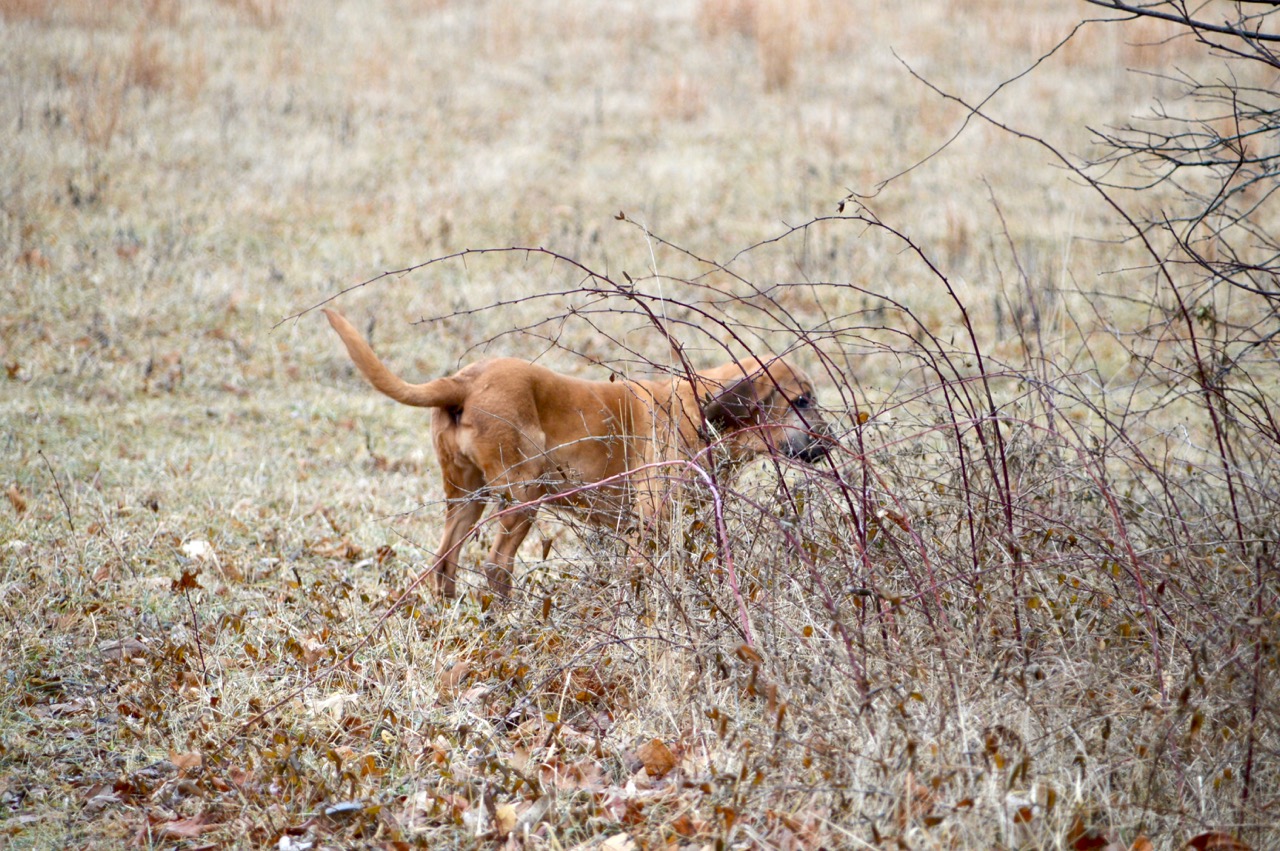 I didn't realize it at the time I took the photos but a lot of them today did not have the hounds as the main focus but the surrounding weeds, bushes etc. My camera may have automatically switched from 'single point' to 'all area' focus when I turned it off. It does that sometimes but not all the time. 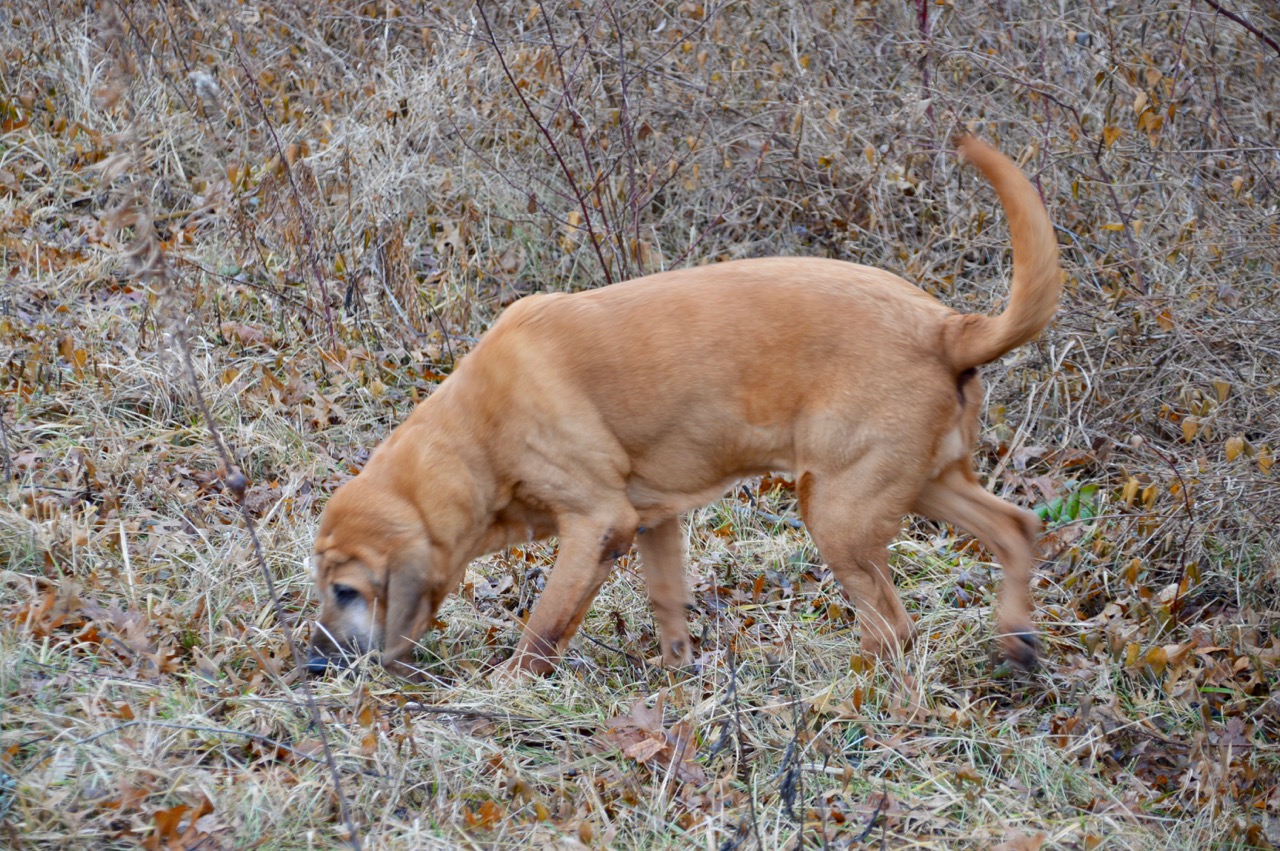 Sadie was more than happy to be going on walks again. I could not remember today when her obsessions with these walks started because I don't remember her being this demanding for walks when Winston was around. Of course back then, she was not the head of household, Winston ran the show. 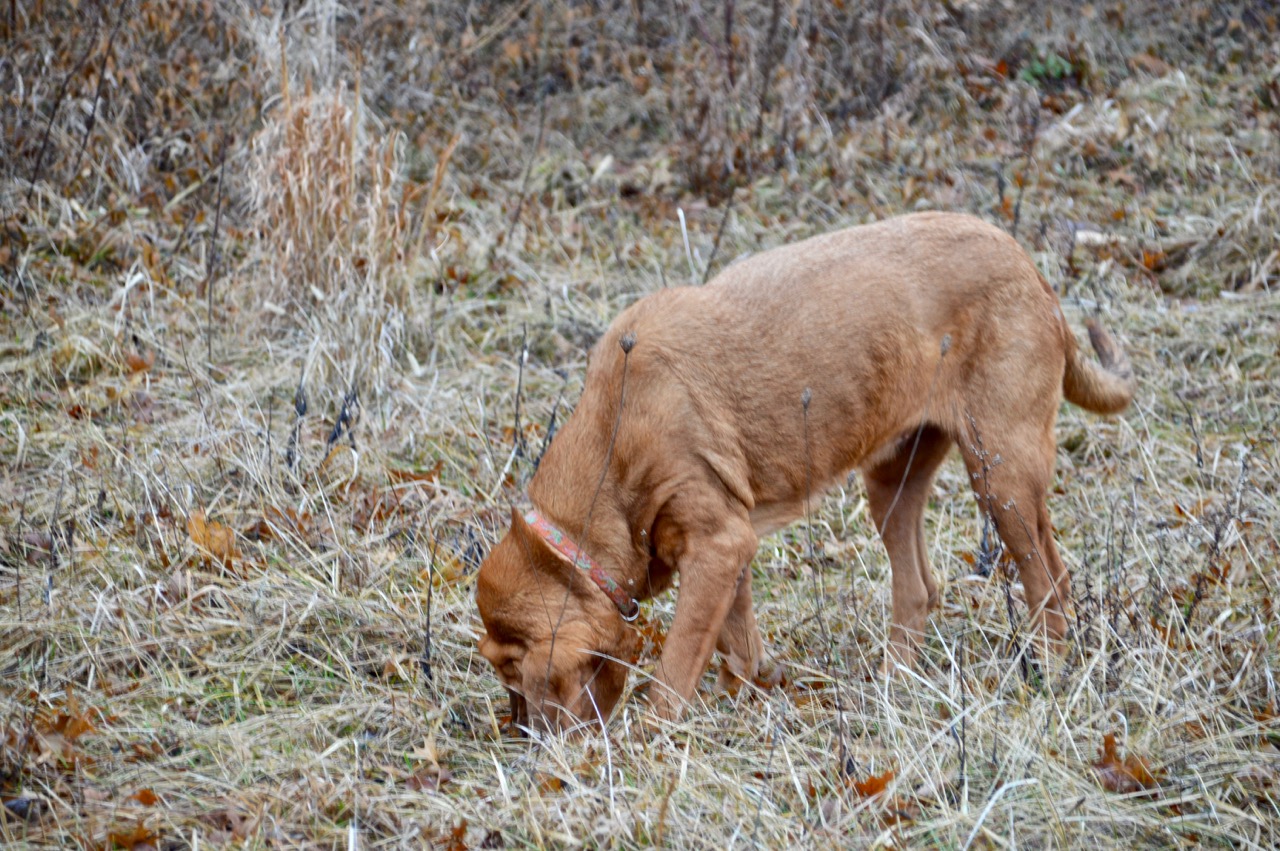 This time last year Stella had started losing her weight mysteriously so it's good to see that she has gained all that she lost last year. I have a feeling her previous owner had dog food out at all times for her to eat along with their other dogs, whenever they wanted. She is alert any time there is any kind of food around or is being cooked. 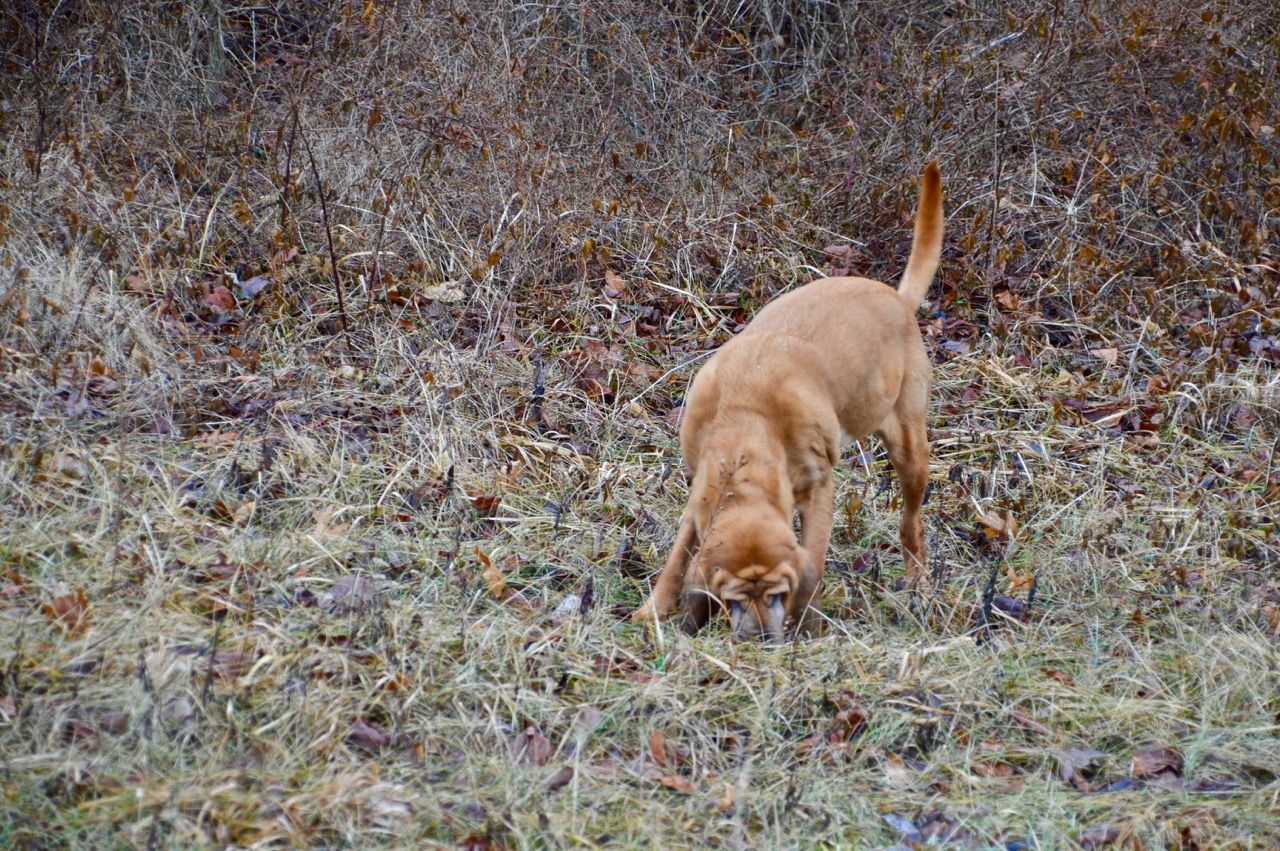 Not to get into politics but I was happy to see the government decided to go back to work. I want my tax refund from my filed taxes they electronically accepted at the IRS on January 19. 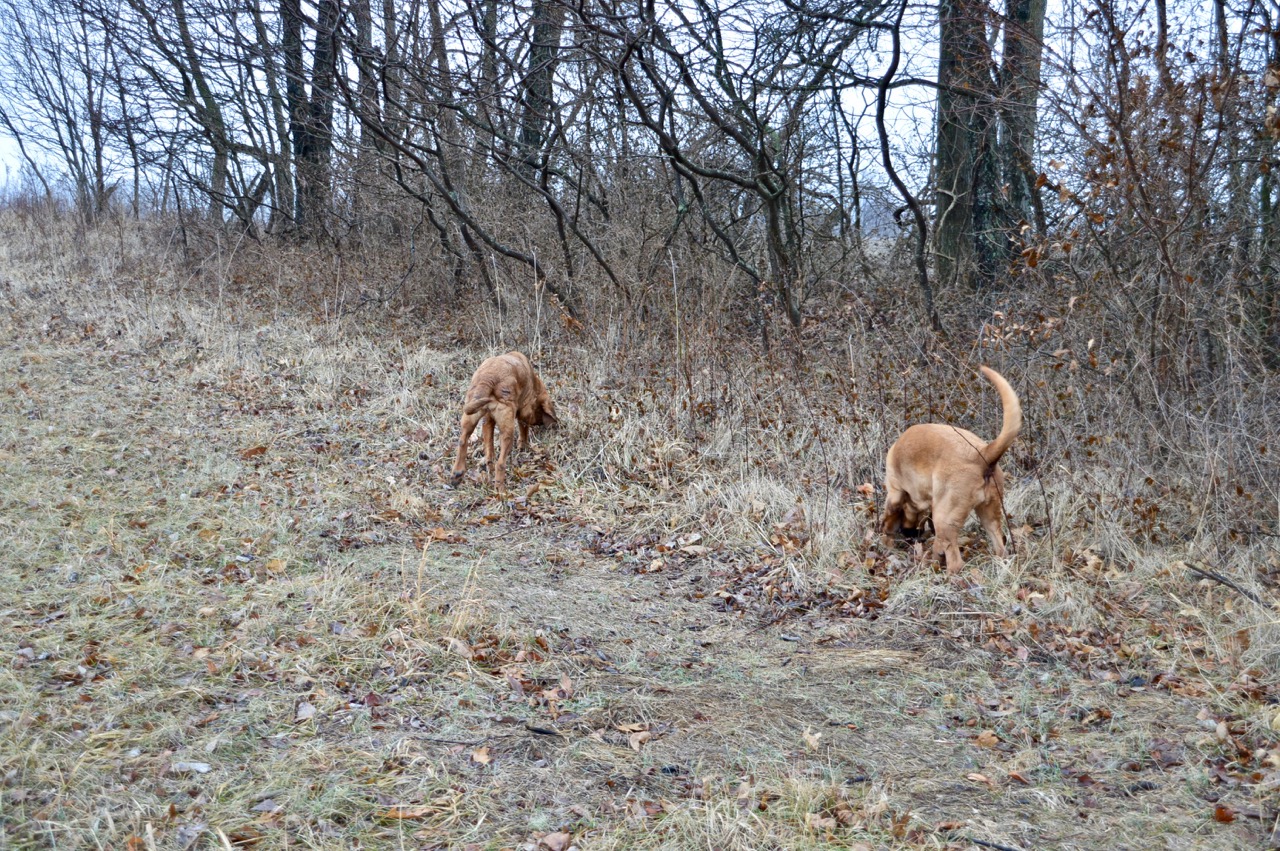 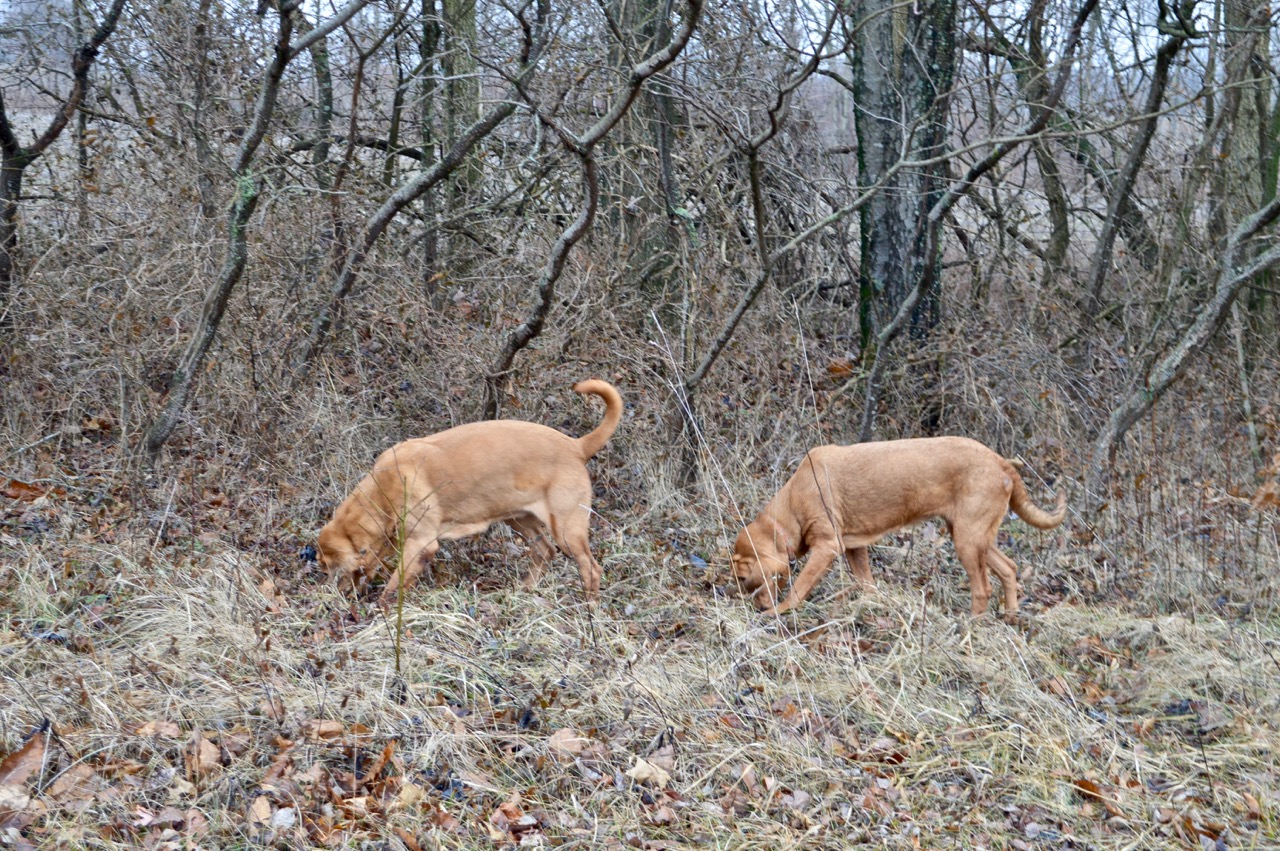 It has been a long time since they have trotted over to the 'far right corner' of the field on this walk ... they did not today either ... but they took their time exploring every inch along the back fence line. I was beginning to wonder if were going to make it back home some time today. 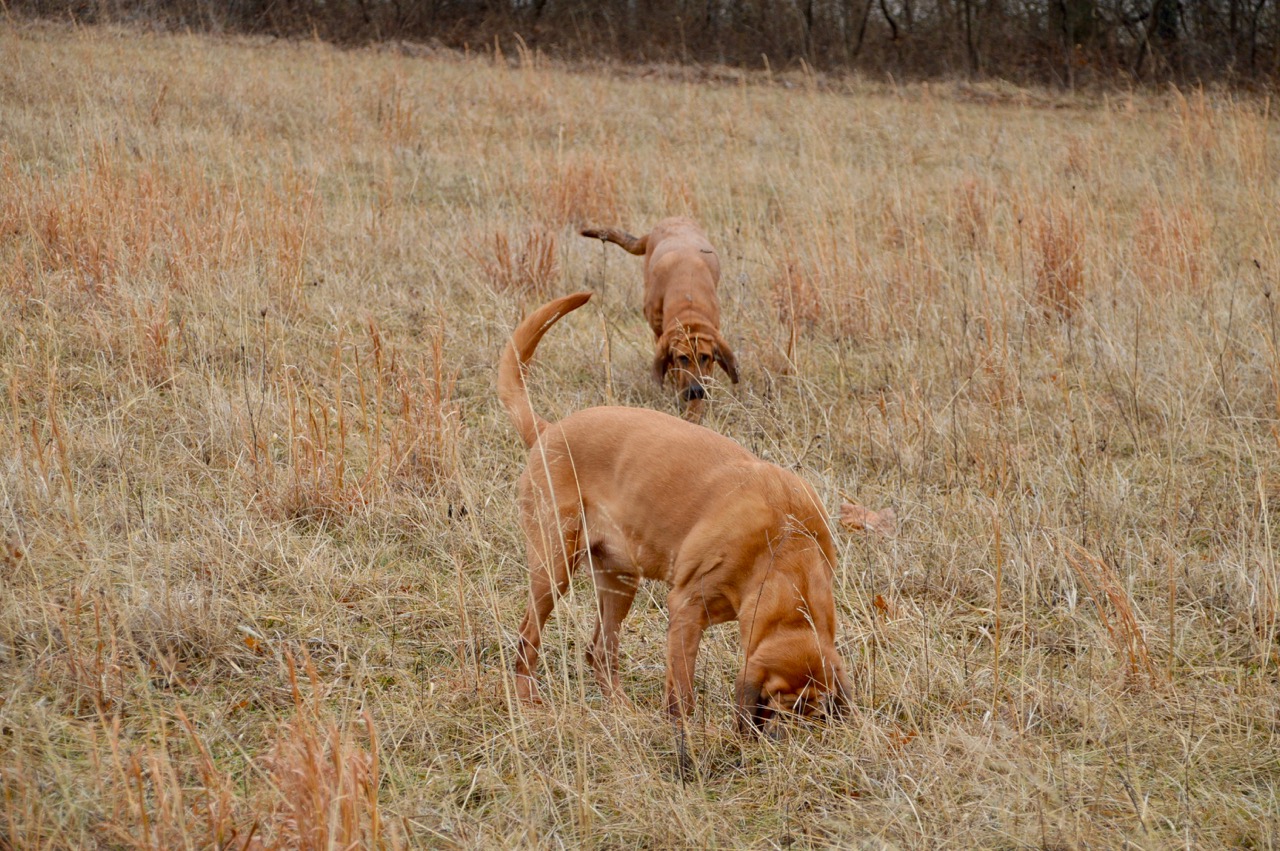 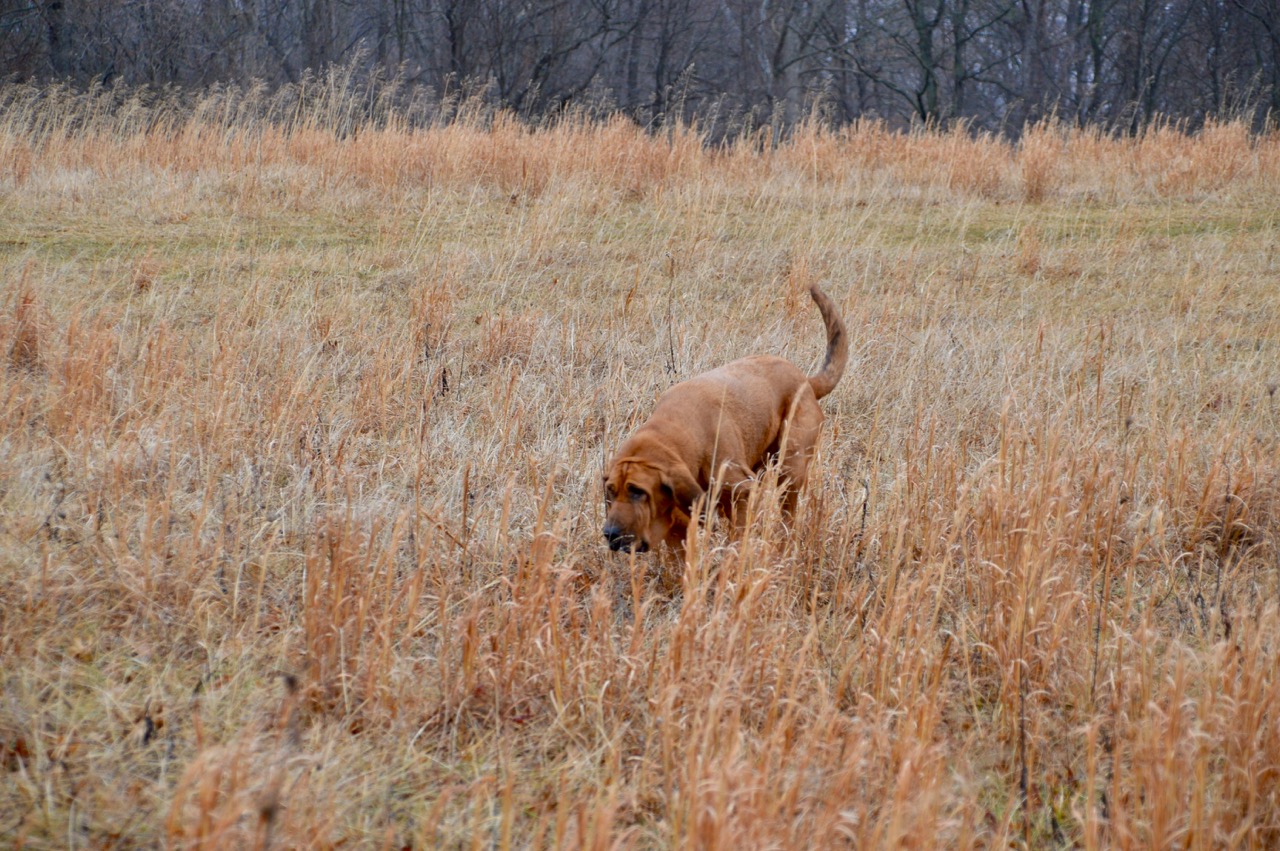 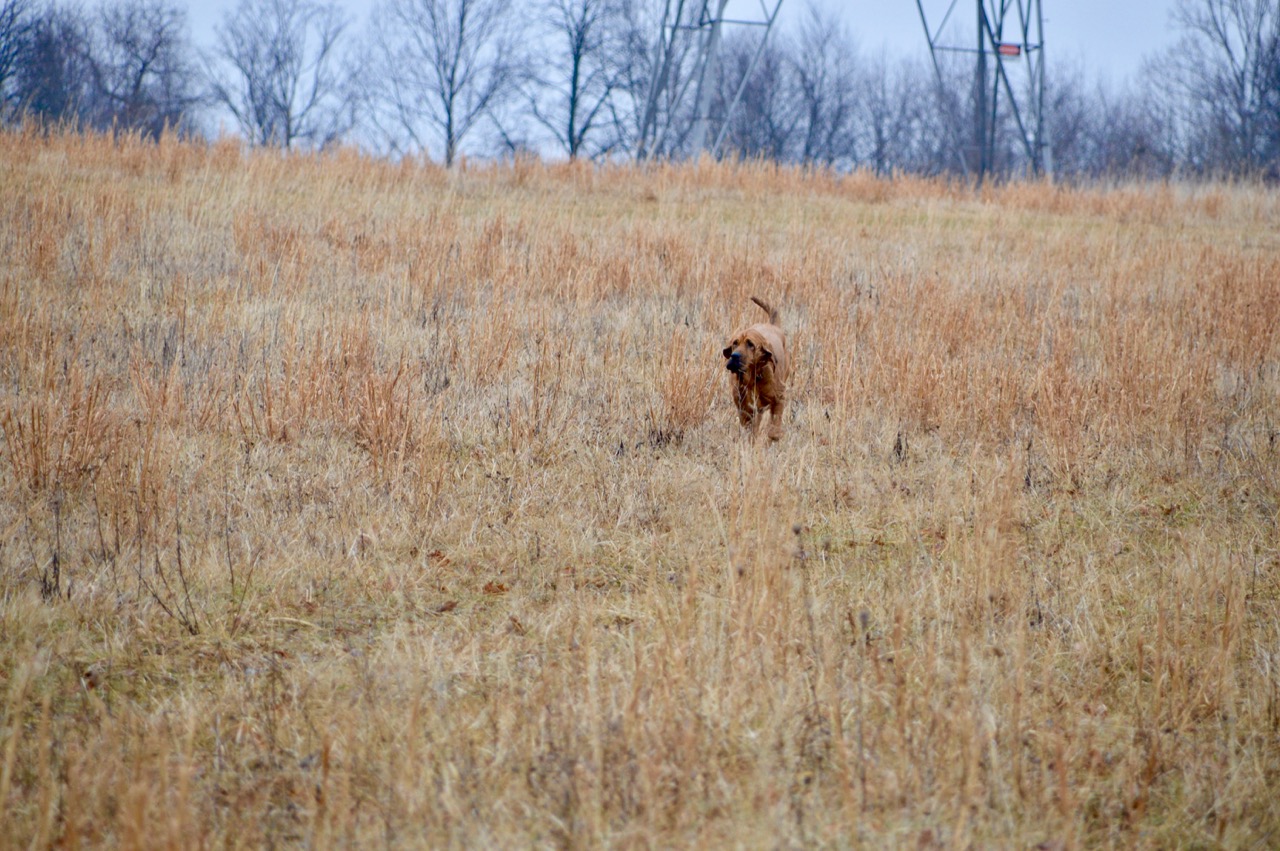 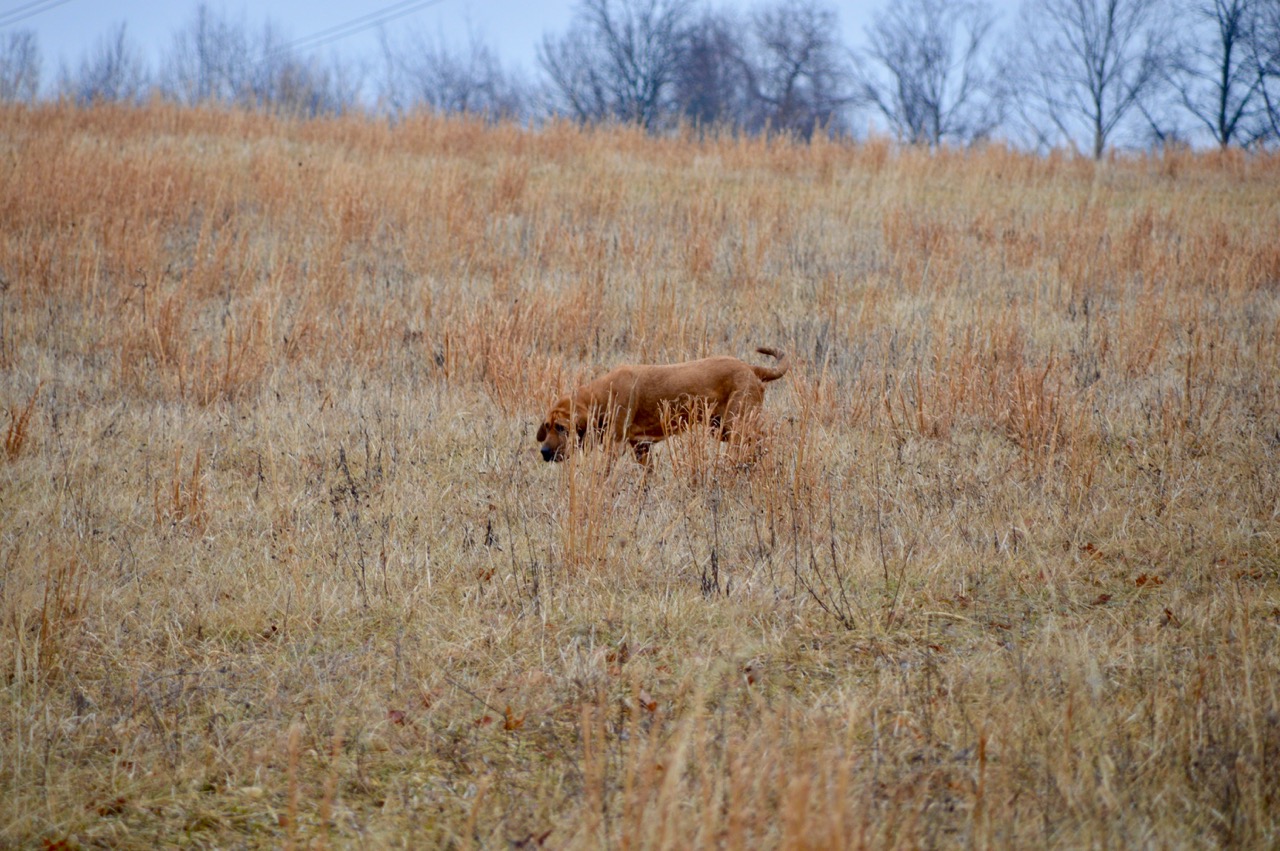 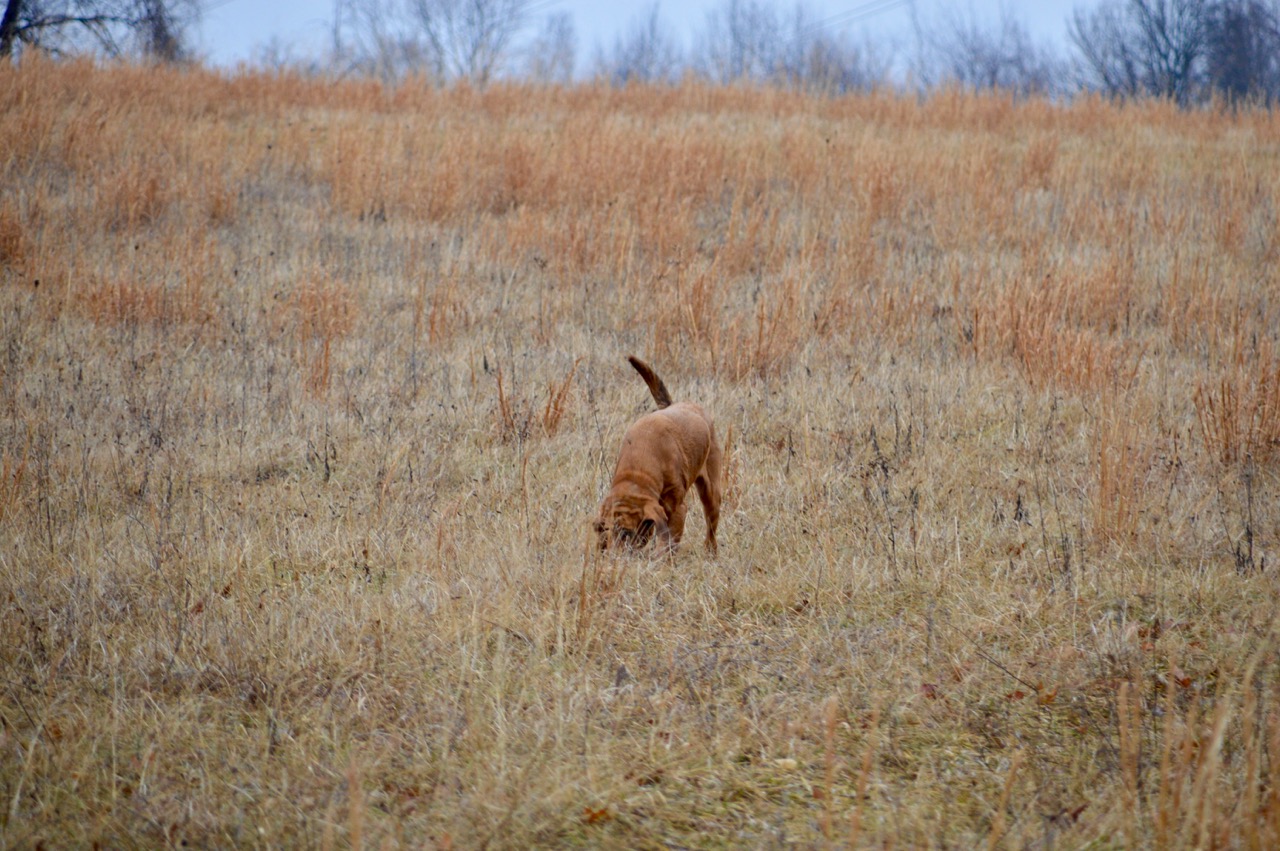 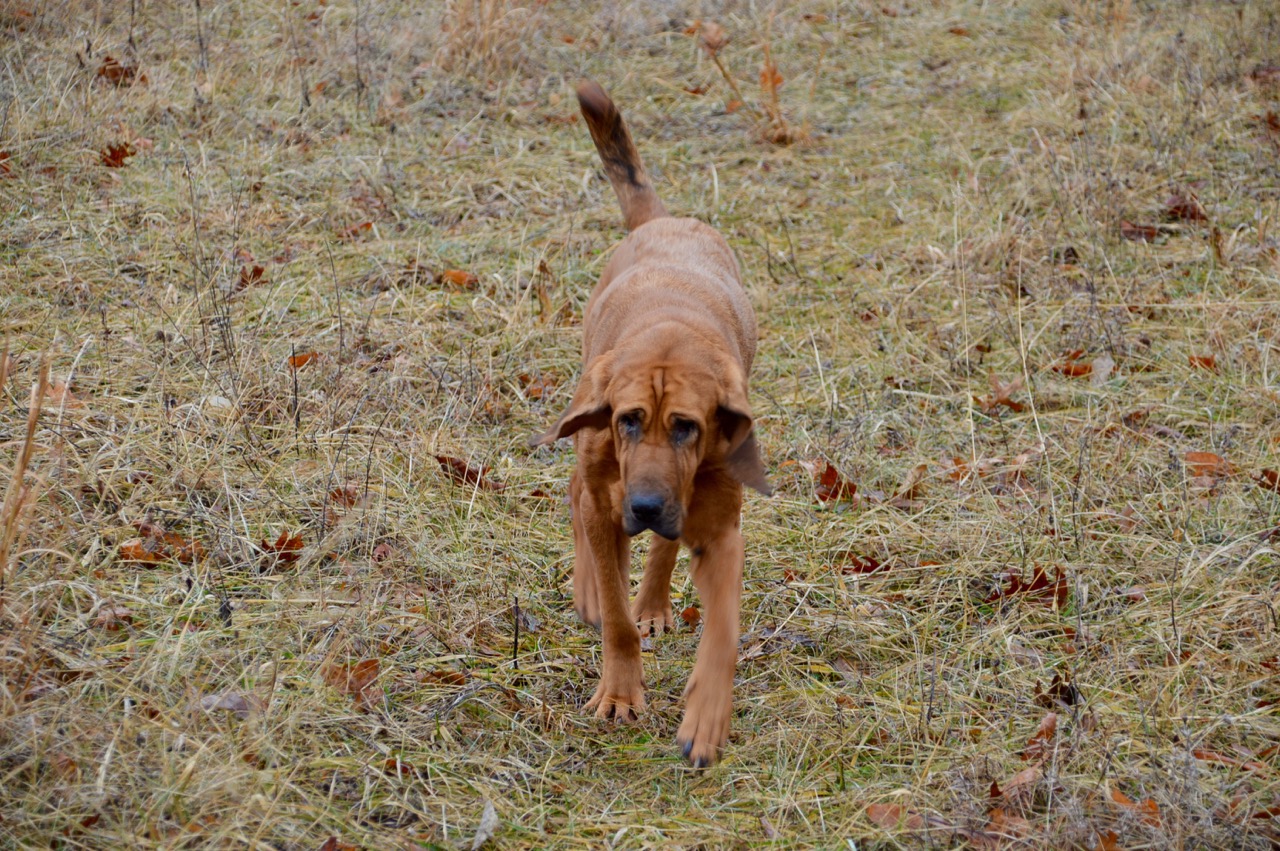 Without me saying anything, just walking with Sadie ... Stella finally figured out we were going home with or without her. She broke into a trot to catch Sadie as we took the normal path back home. It wasn't cold but the wind was stronger as we walked into it instead of having it at our backs. 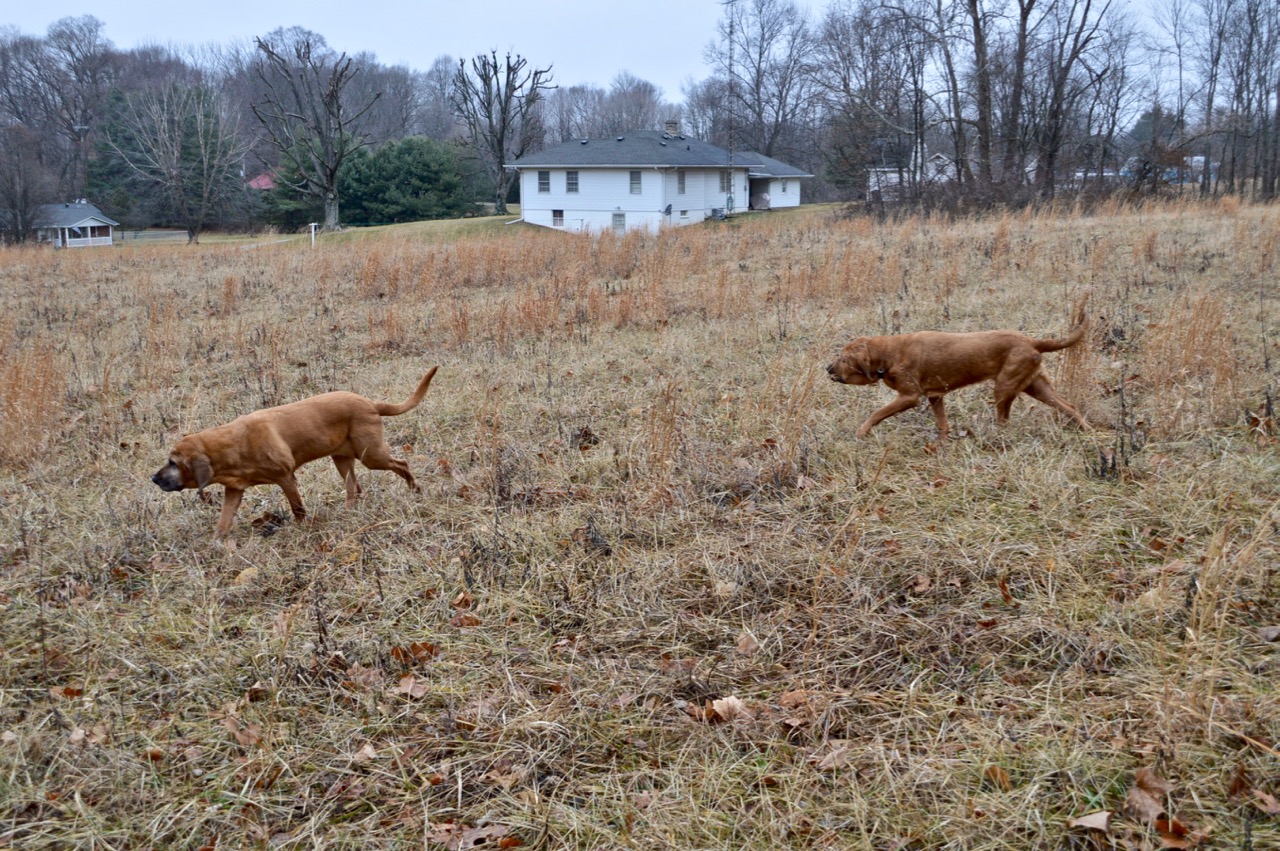 I can't wait until the field is nice and green this spring. 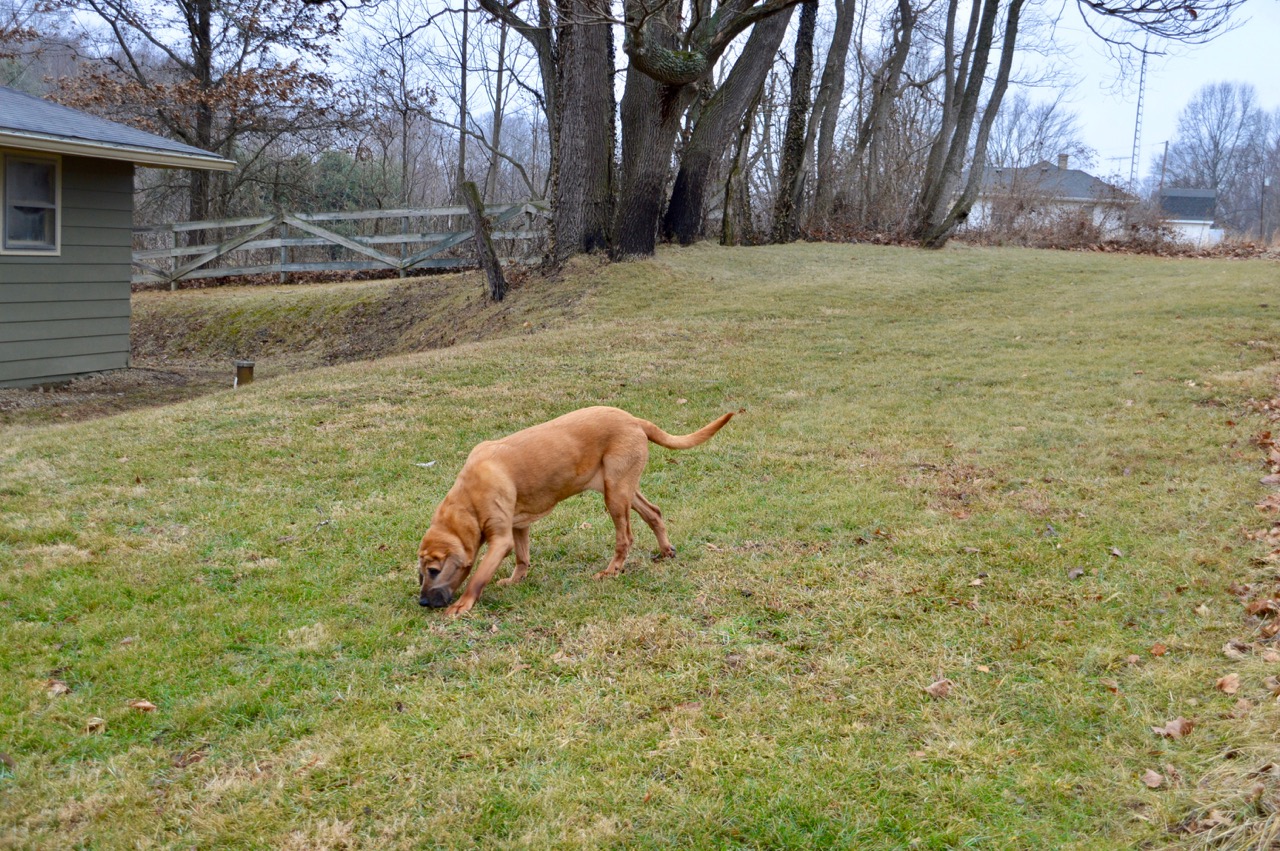 This past fall and early winter has been the worst mole damage I have ever seen in my backyard. I need to have someone bring their riding mower and roll the yard for me this spring. It would be a first time I've ever done that. I am debating whether to apply grub worm killer in March to get rid of or lower the number of moles. 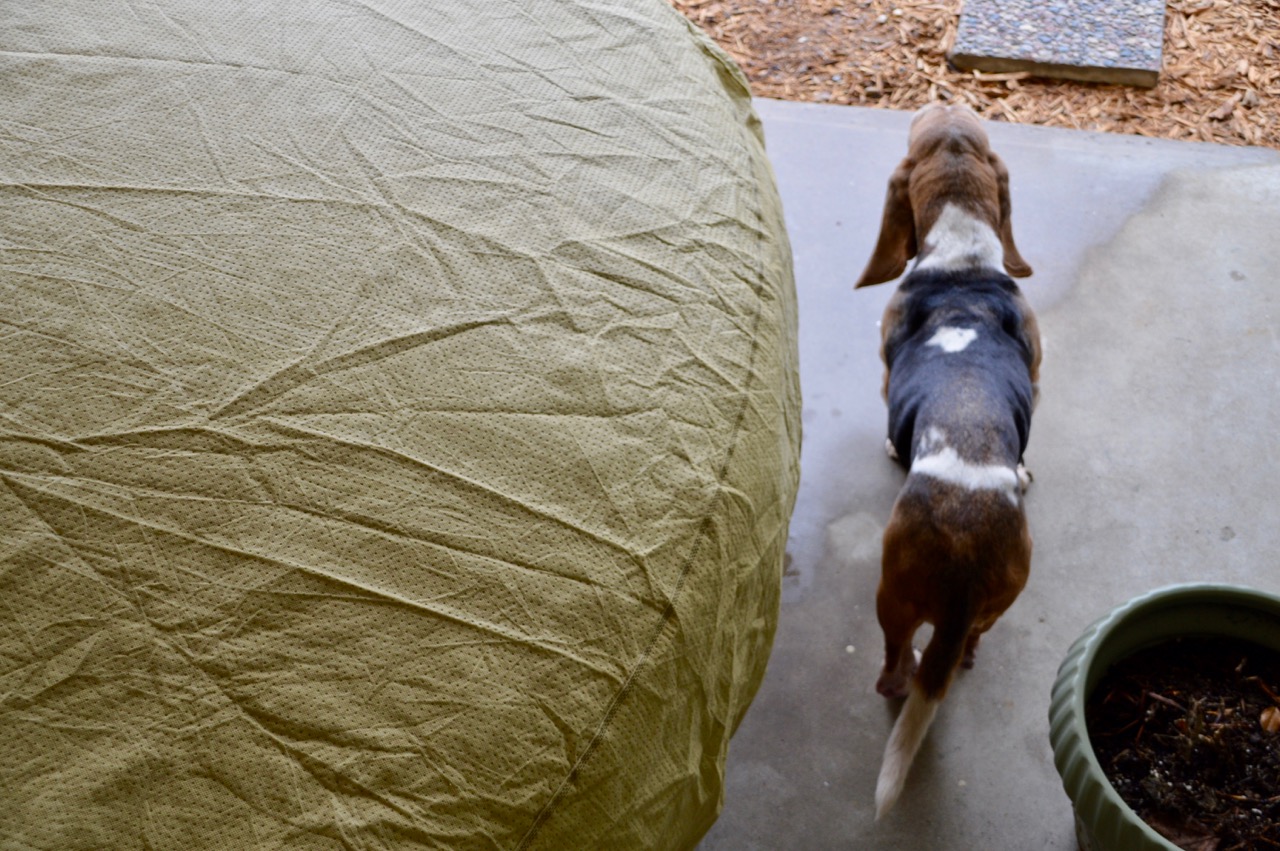 Heidi did not hesitate to come running when lunch was called but she came to a sudden stop once she felt the strong cold wind from the SW come out from behind the Z4. She eventually moved out into the yard but didn't stay out any longer than required to relieve herself. 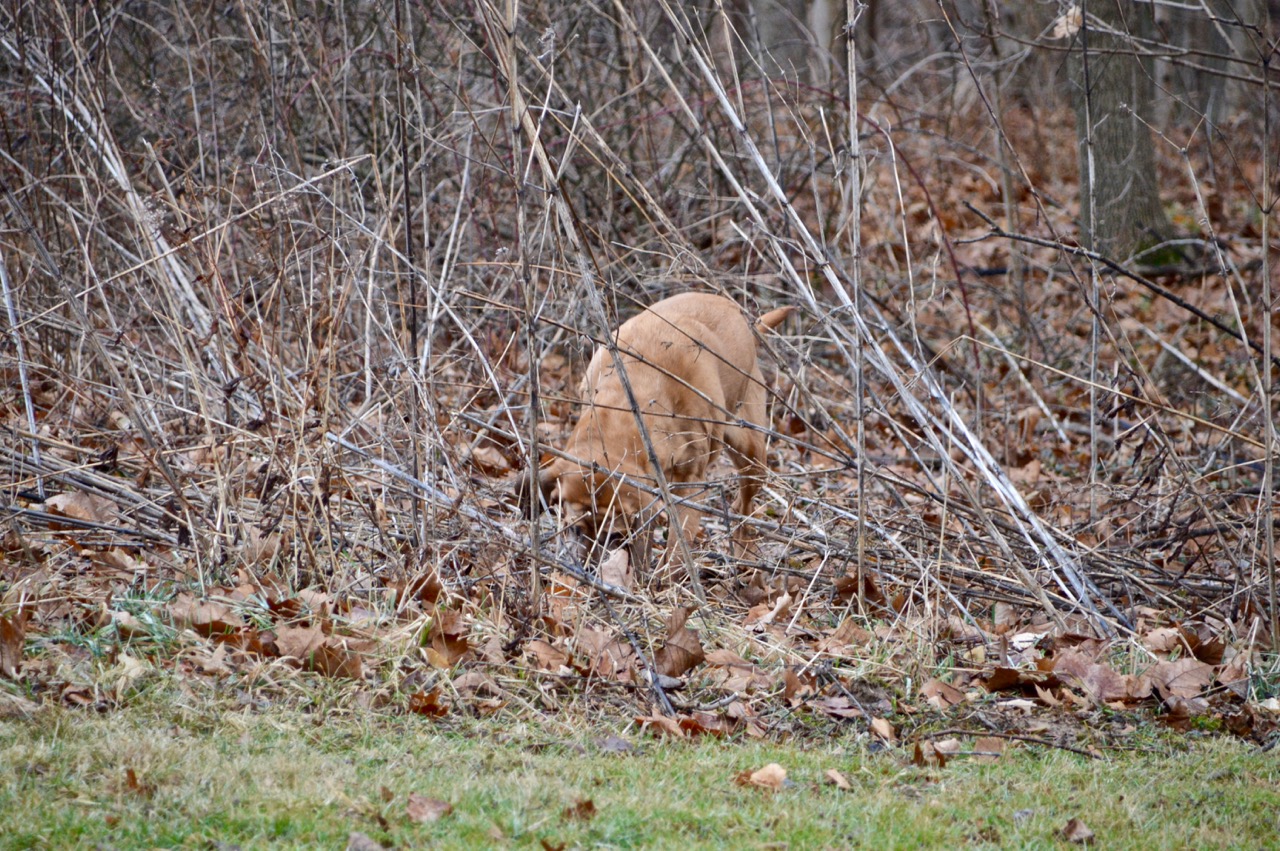 That is one thing about winter ... with all of the tall ragweed and thick brush gone for the winter, it gives Sadie easy access to the woods right behind the burn pile. From the way the dead ragweed has been mashed I think deer pass through there at night. I have caught them in that area sometimes when it's really late. 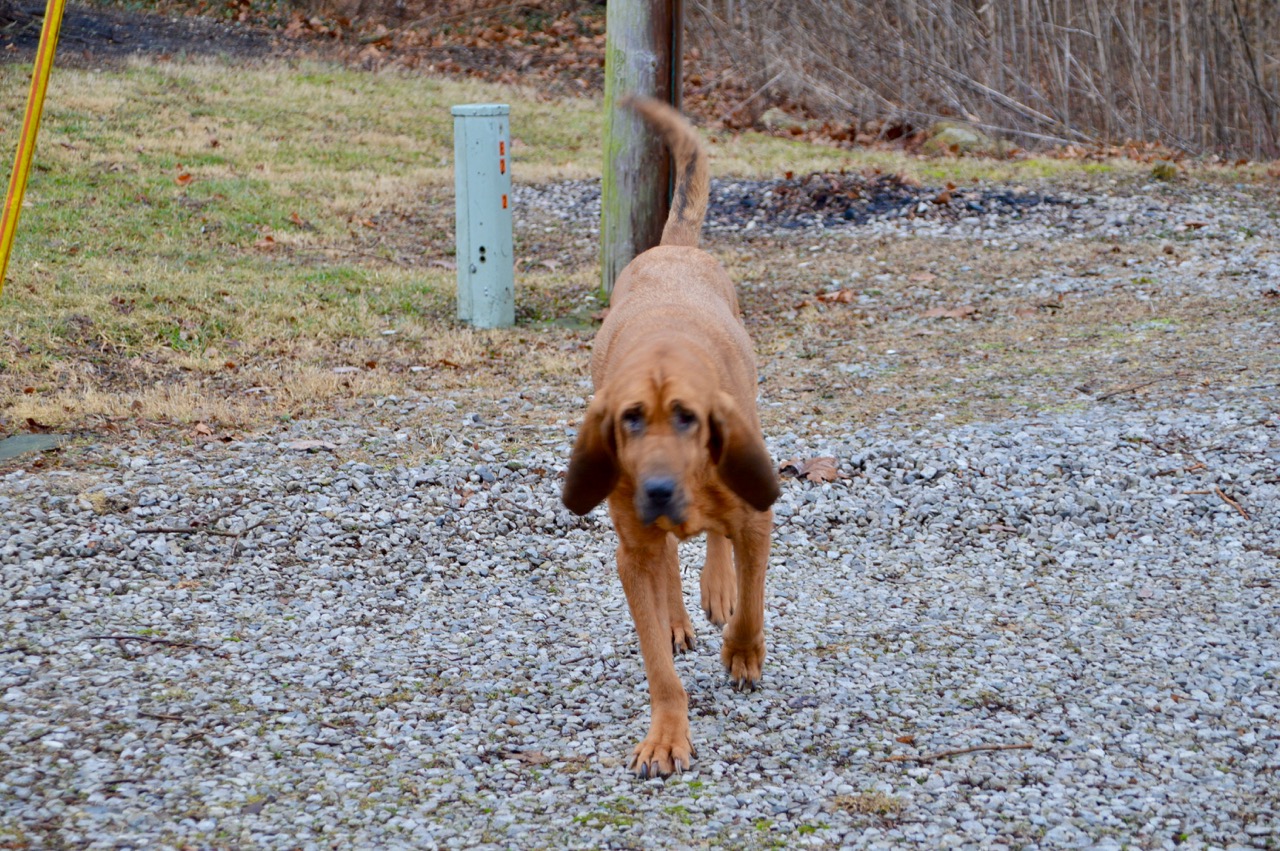 I guess both bloodhounds were satisfied with their morning walk. They didn't stay outside after their lunch much longer than Heidi did. Within minutes all three had found their normal afternoon sleep spots and were sound to sleep. Lately Stella has decided to pin my desk chair close to the desk and sleep right behind me. For me to get up and out of the chair I have to wake her up to move. 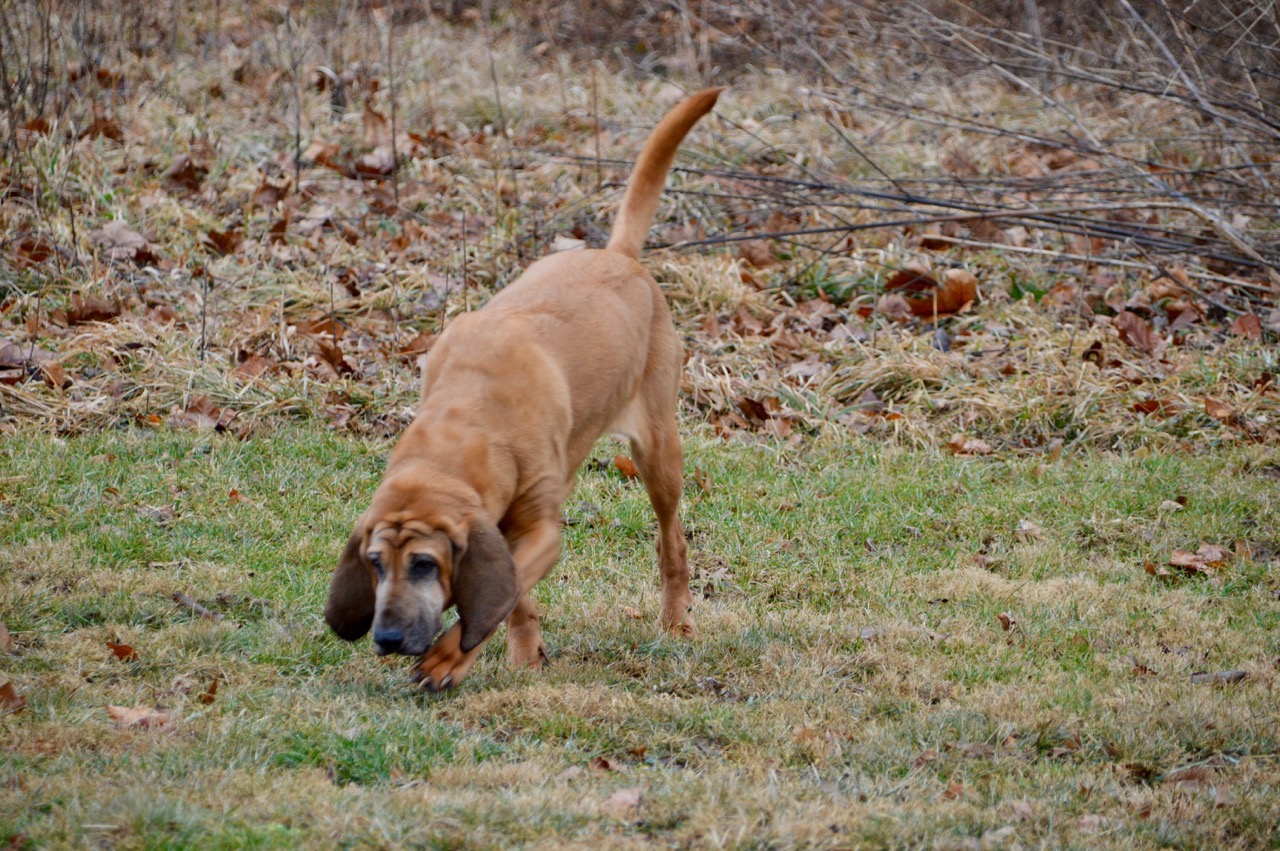 It's hard to believe that January is a week from being over. Time is flying as usual.