That Arctic Weather Is Gone !! 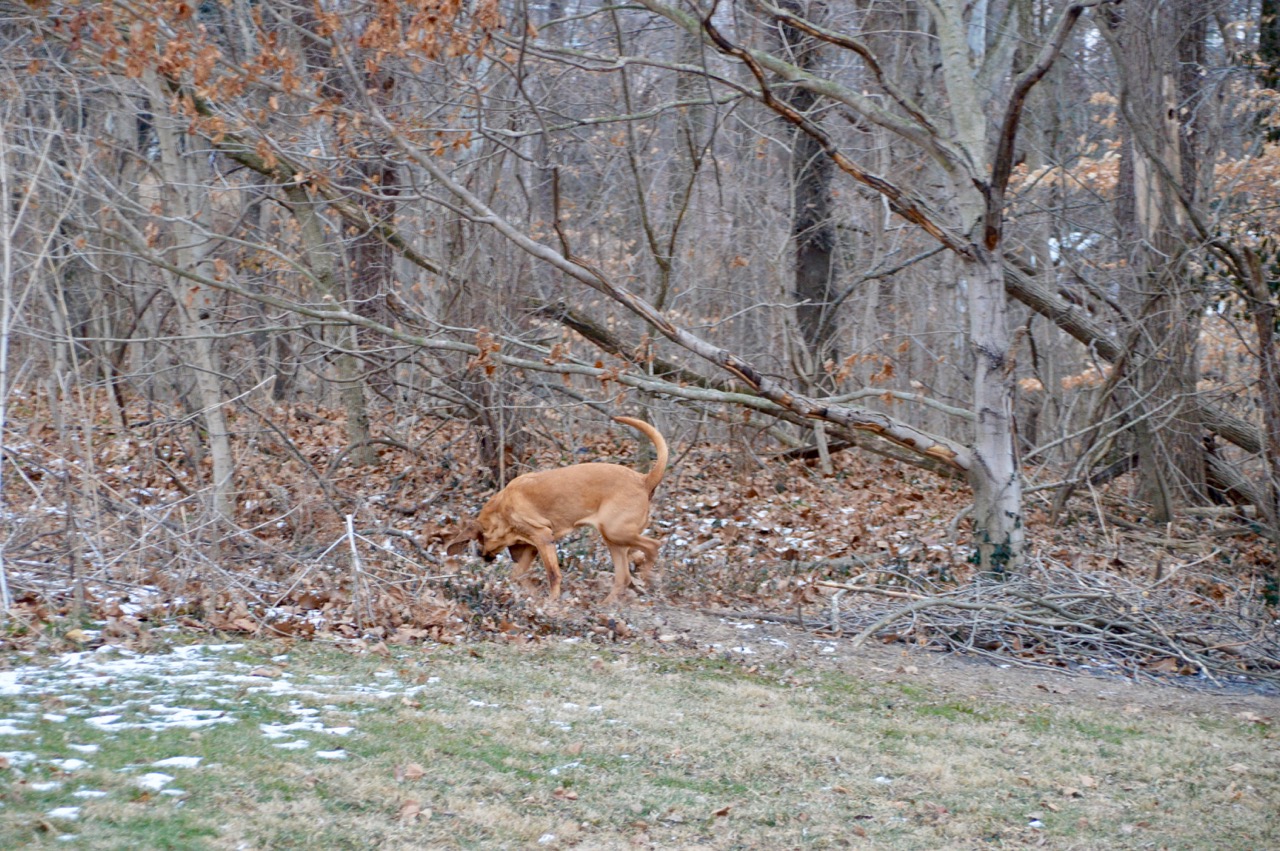 Not only was I thrilled but so were the bloodhounds, waking up to temperatures in double digits for the first time in a week. Heidi is still hibernating but when I saw the temperature at 17° I knew we had to take our first morning walk in 5 days. Sadie was beside herself with excitement when she realized I was getting ready to go outside. She has had cabin fever to the max these past 5 days. 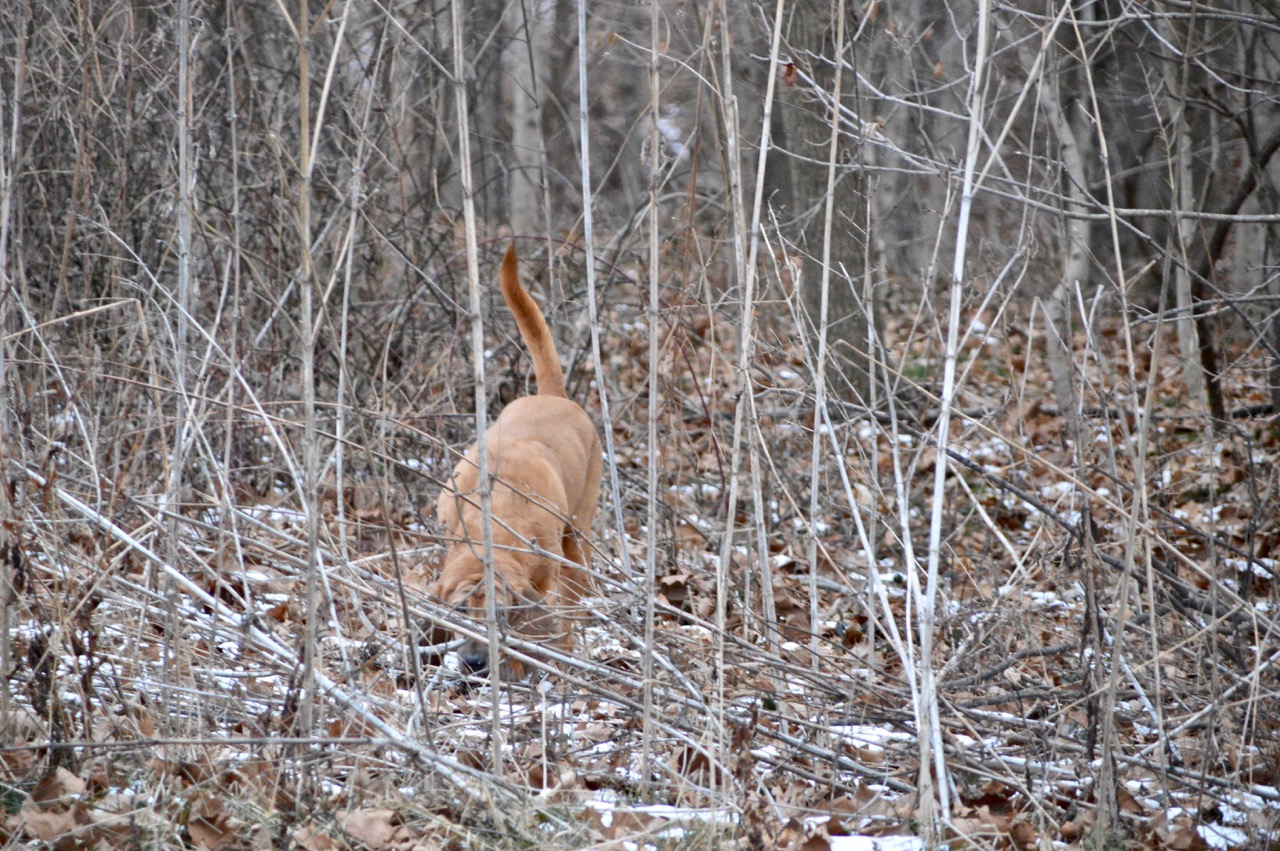 I know we did not get the high winds and all that snow you may have seen on the national news in the upper NE of the country, but we shared their temperatures. Most days were spent with high temps in the 5°-7° range with a wind chill below 0°. The hounds were limited outside to just long enough to dump their tanks. I never had to call for them because all three were back at the door to be let in as soon as possible.

For the first time that I can ever remember, a few mornings ago just after Sadie finished relieving herself in the field, she started to walk ... stopped ... then lifted her paw. It was that cold. She never gets that cold. She along with Stella staggered to the door but ran inside once I opened the door for them. 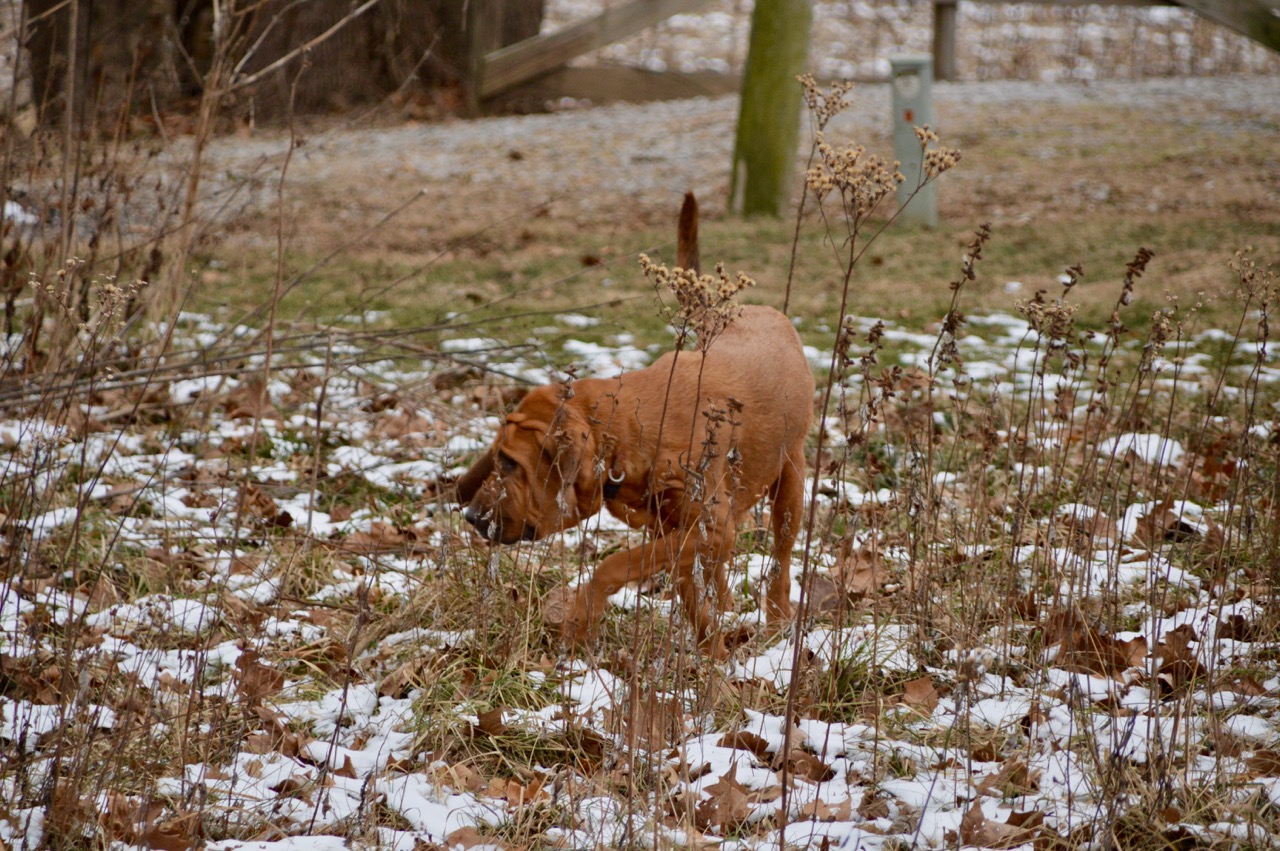 We spent a lot more time inside than I can remember. The bloodhounds played, slept and ate. While Heidi slept, slept and slept ... only getting up to eat. I transferred movies and ballgames from my Directv DVR to DVD's. I watched college and NFL games and spent time on the computer researching different things I had on my mind. 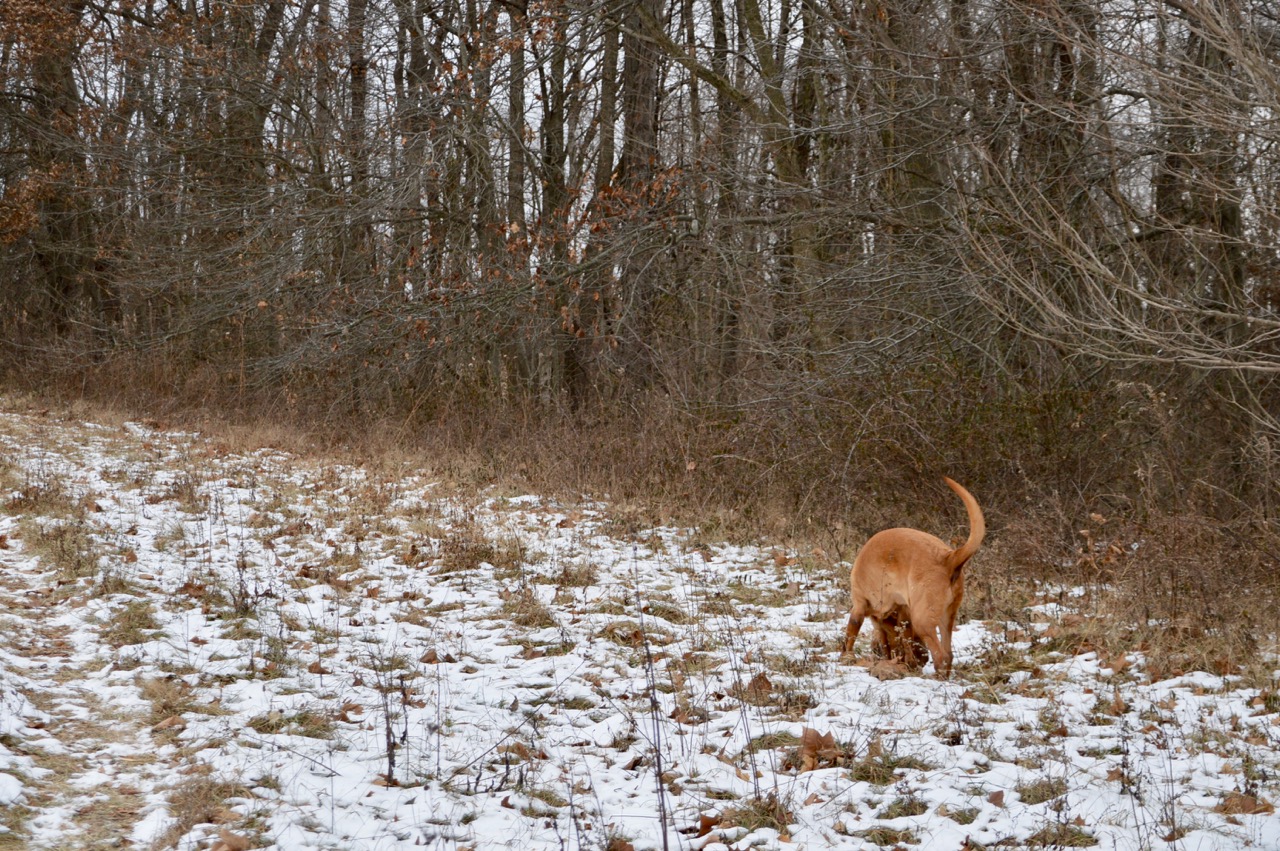 So this morning it was nice to get back to the normal routine. It felt warm with a wind chill up to 7°. The temperatures alone will climb to the high 30's today and believe it or not, there is a good chance to see Wednesday and Thursday in the 50's and Thursday being just a few degrees below 60°.

I was very happy to hear my local tv weather man tell his viewing audience that after January 15 we are headed for a "warmer than normal" winter. My electric heat bill will welcome that news or is it my checking account will like that? The utility company and I don't settle up until the end of April since I am on their 'budget plan'. In my case my annual date is April 30 before my new monthly rate is adjusted for the following 12 months. 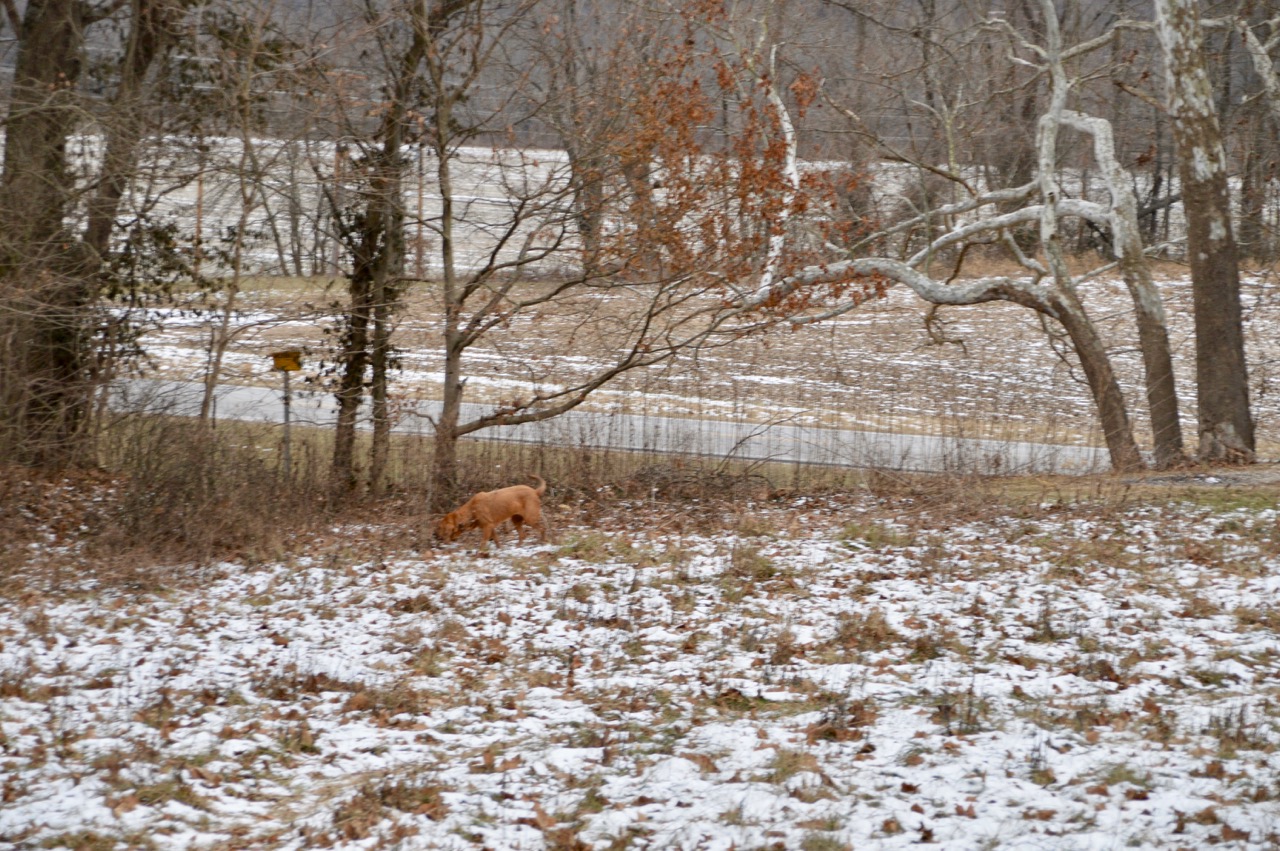 I could tell very early in the walk that Stella had no interest in joining Sadie and I this morning. As I walked away I only hoped we would meet her back in the field on our way home and would not have to send out the search team to find her somewhere in that wooded area. 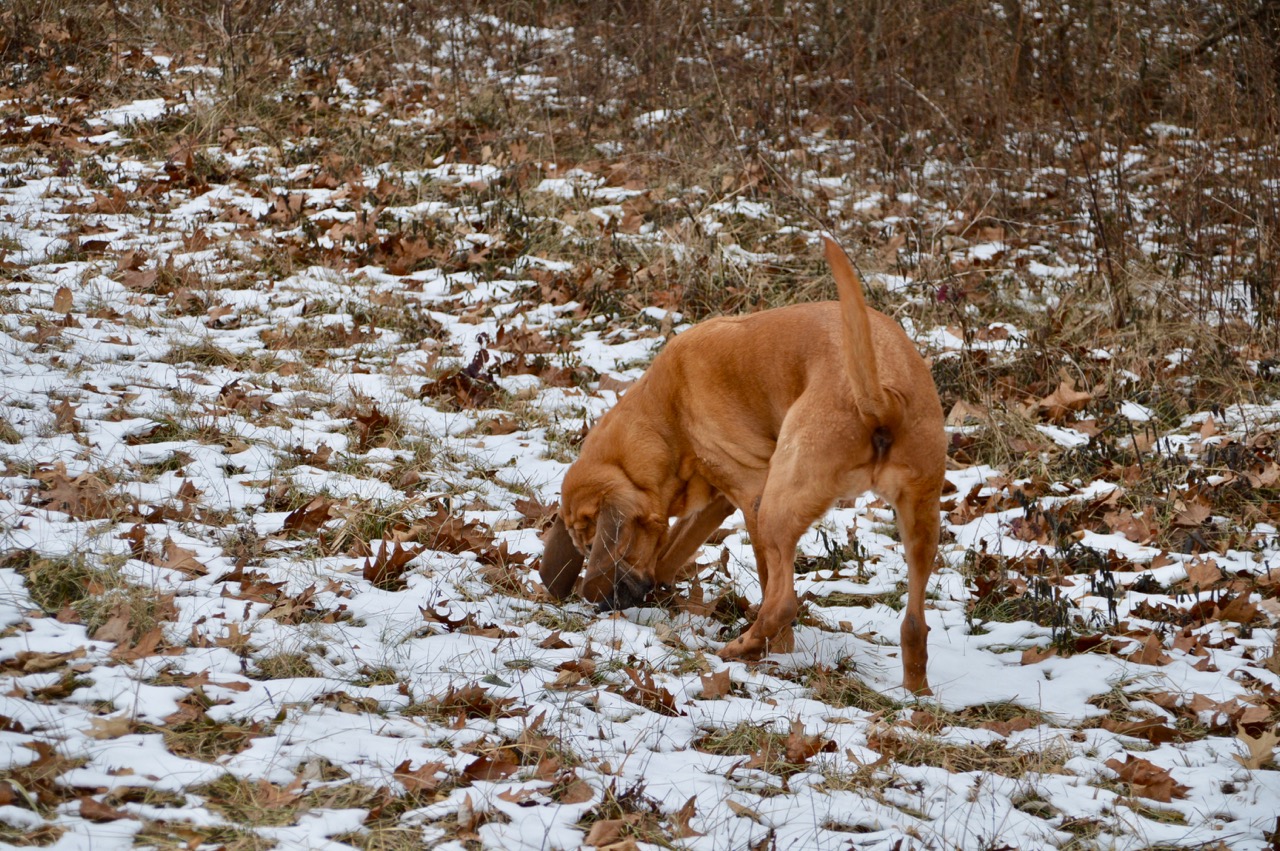 Sadie was back in true form after a 5 days layoff. I cannot describe how much she begged to go outside these past few days. She did not understand how cold it was nor how dangerous it was to be outside for longer than 5 minutes. Let's just say she wasn't a happy bloodhound and spent a lot of time just sitting, starring at me, then moving with excitement every time I got up out of my chair. 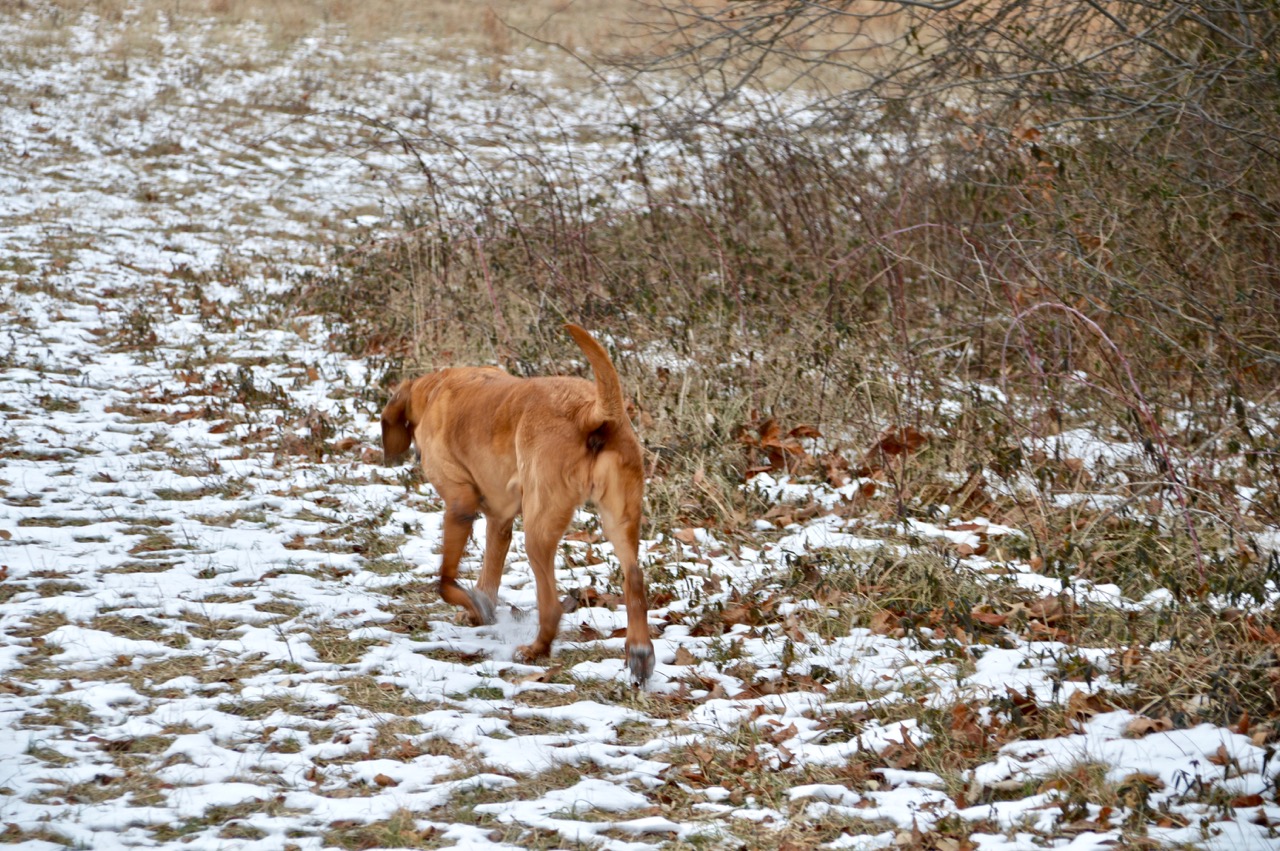 So today's walk was a big relief to her and to me also. 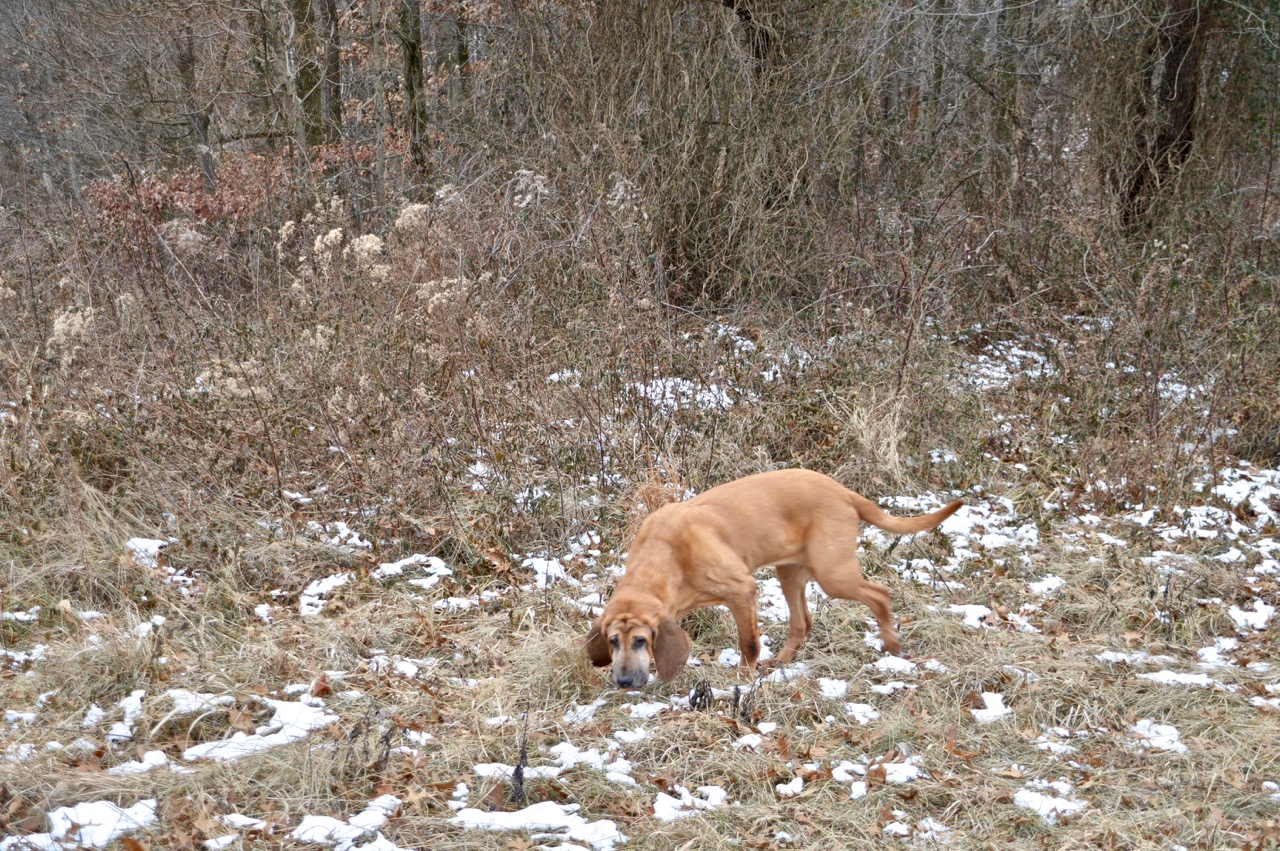 Whenever I would check the temperatures online I could see that unless you lived in the SW near Arizona and San Diego ... everywhere else in the USA was just cold. My Facebook friends in Florida were in shock and couldn't get over how their change in weather had rocked their world. 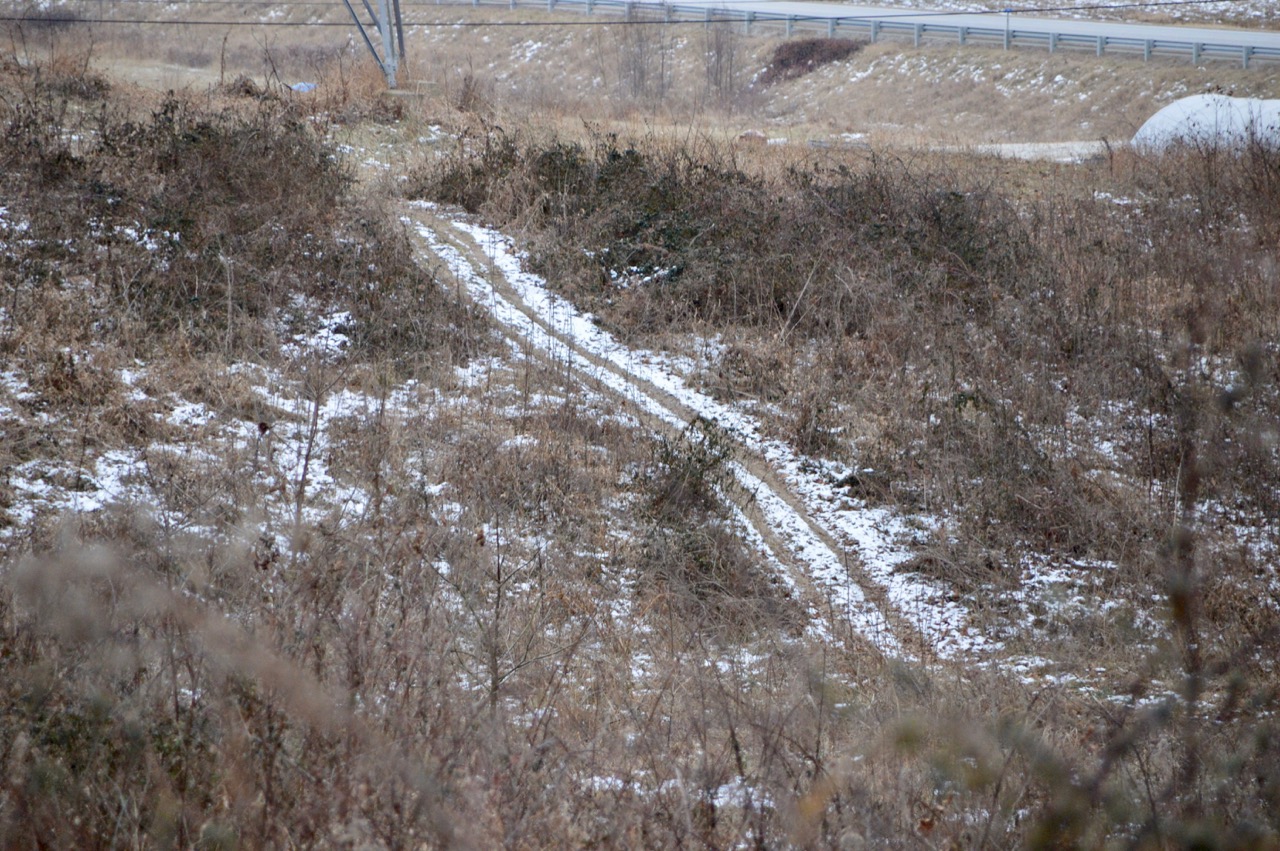 These are Christopher's ATV tracks down into the gully from the opposite side. This gully is all part of the field, owned by the neighbor a couple of houses north of me. When he stopped to talk and see the hounds last fall while we were walking ... I told him the deer moved from the far right corner, over the hill and into the gully ... he must have decided to check it out. 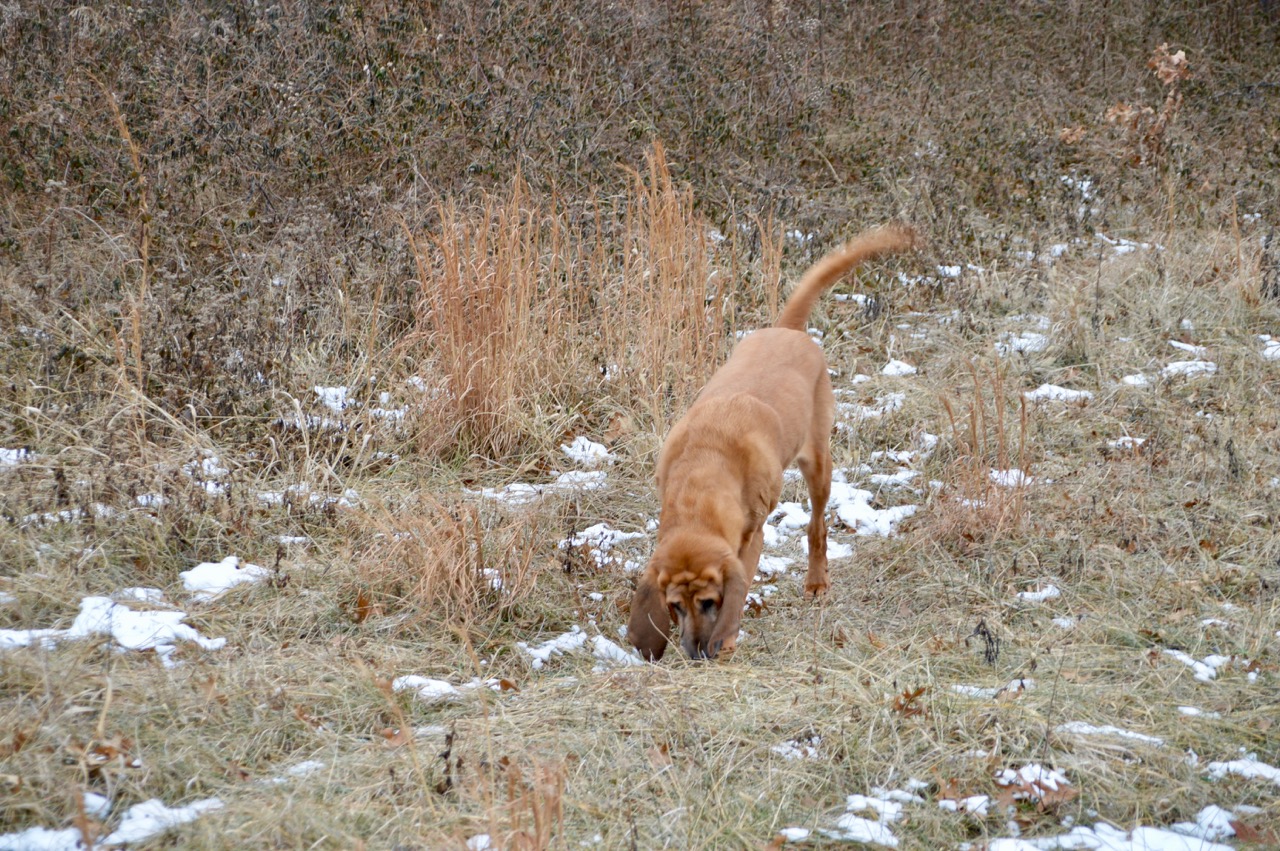 With the severe weather, the argument of climate change pops up on the news, on social media and forums. Everyone has their own feelings on the subject and at times those discussions become pretty 'heated'. I stay away from any kind of discussions like that.

Yet I found in this article in Apple News that is delivered to my inbox ... some scientist agree with me. "It's just winter". You can read the article here. 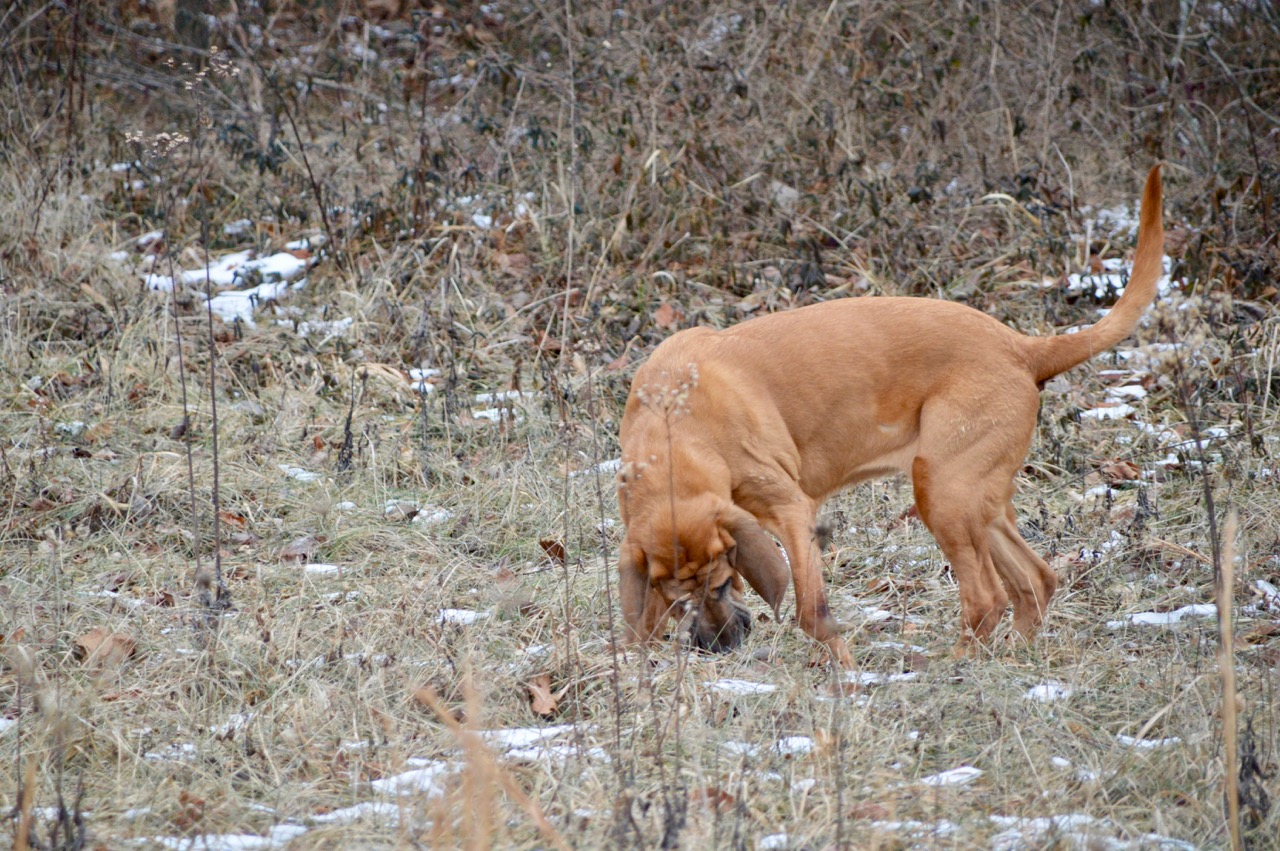 I did start the Z4 every couple of days in the afternoons during the freezing weather. I wanted to see if the battery was okay and I wanted to idle the engine for a short time as a workout. The FJ did go on a few trips in the extreme cold temps but we didn't go far and only a couple of times. Food needed to be replenished. 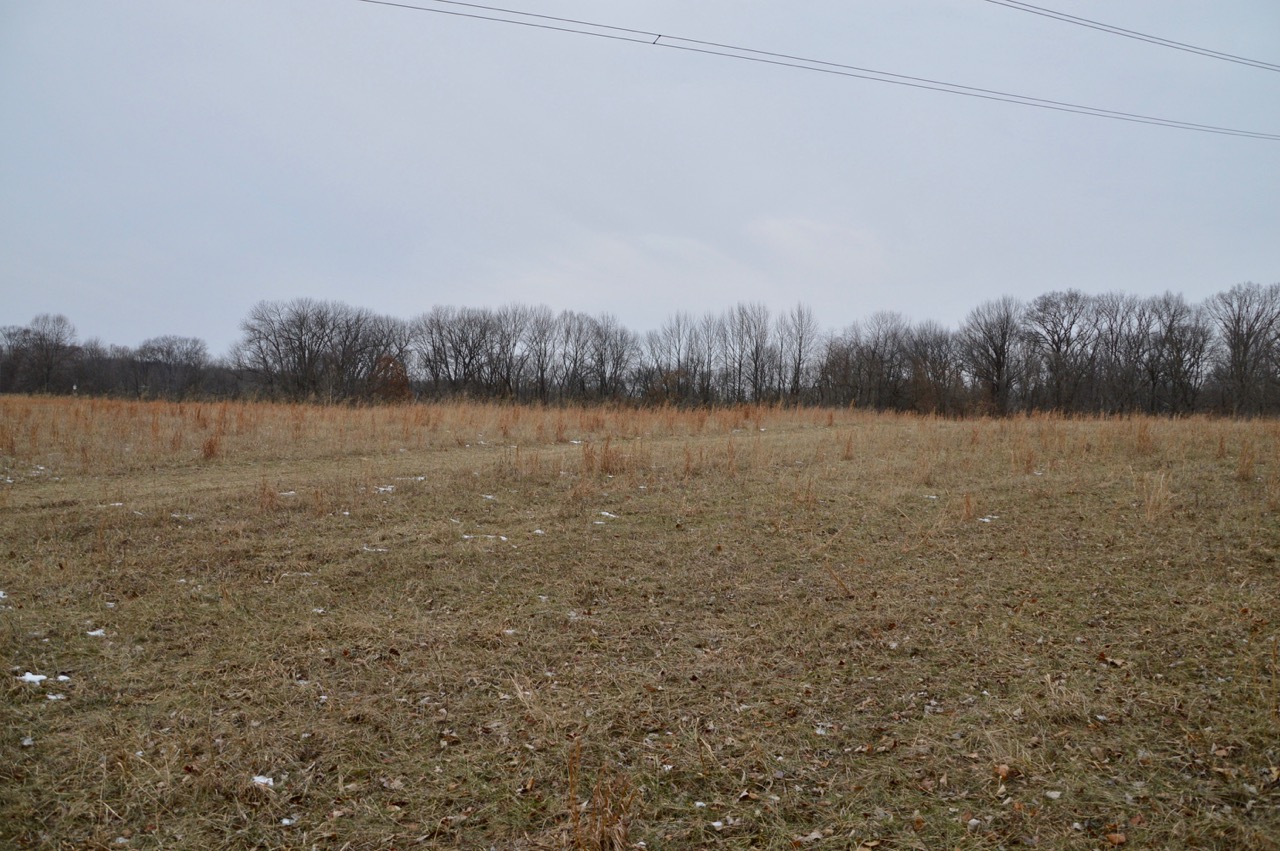 Standing in back of the field there were very little signs that it had snowed. Just a few patches of frozen ice laying around ... but the ground felt like we were walking on solid rock. 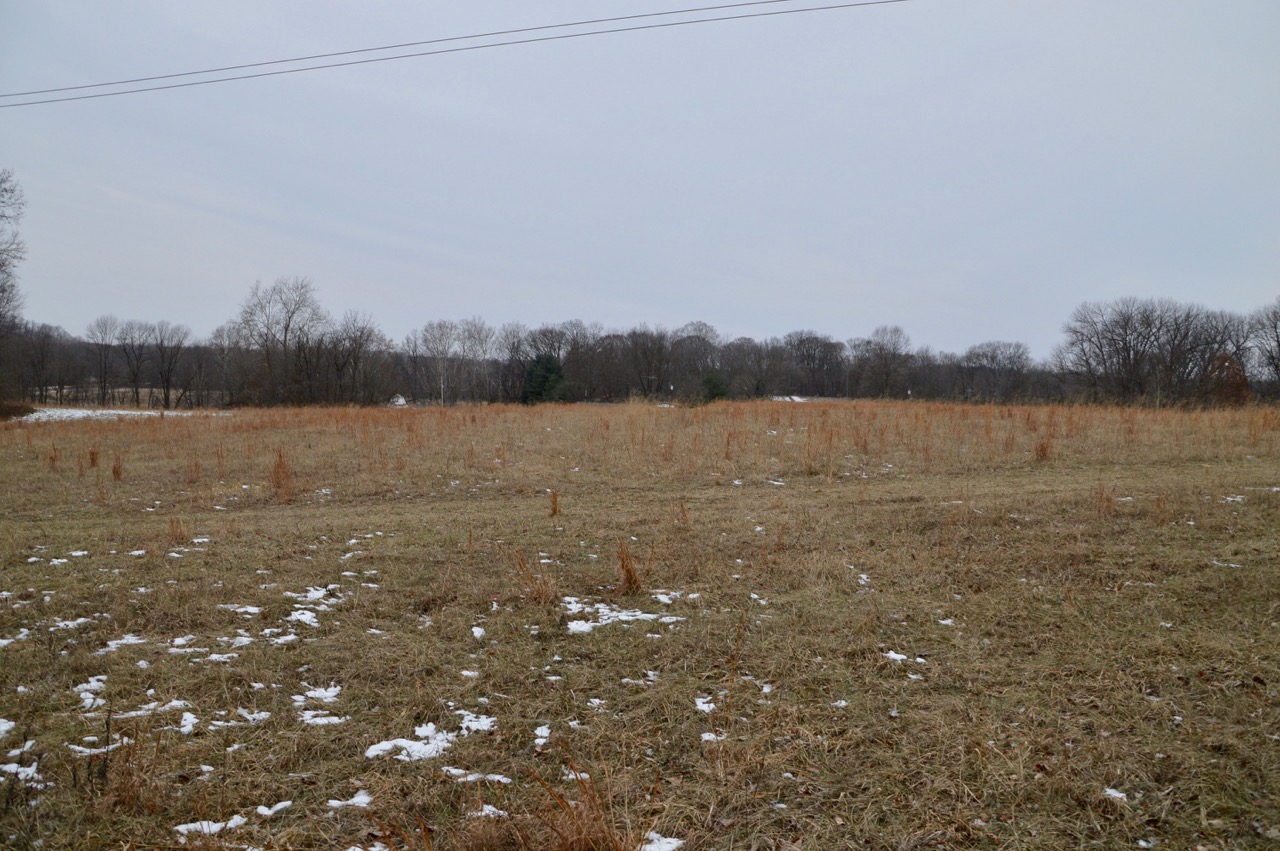 My friend in Phoenix enjoyed reminding me it was 75° yesterday. 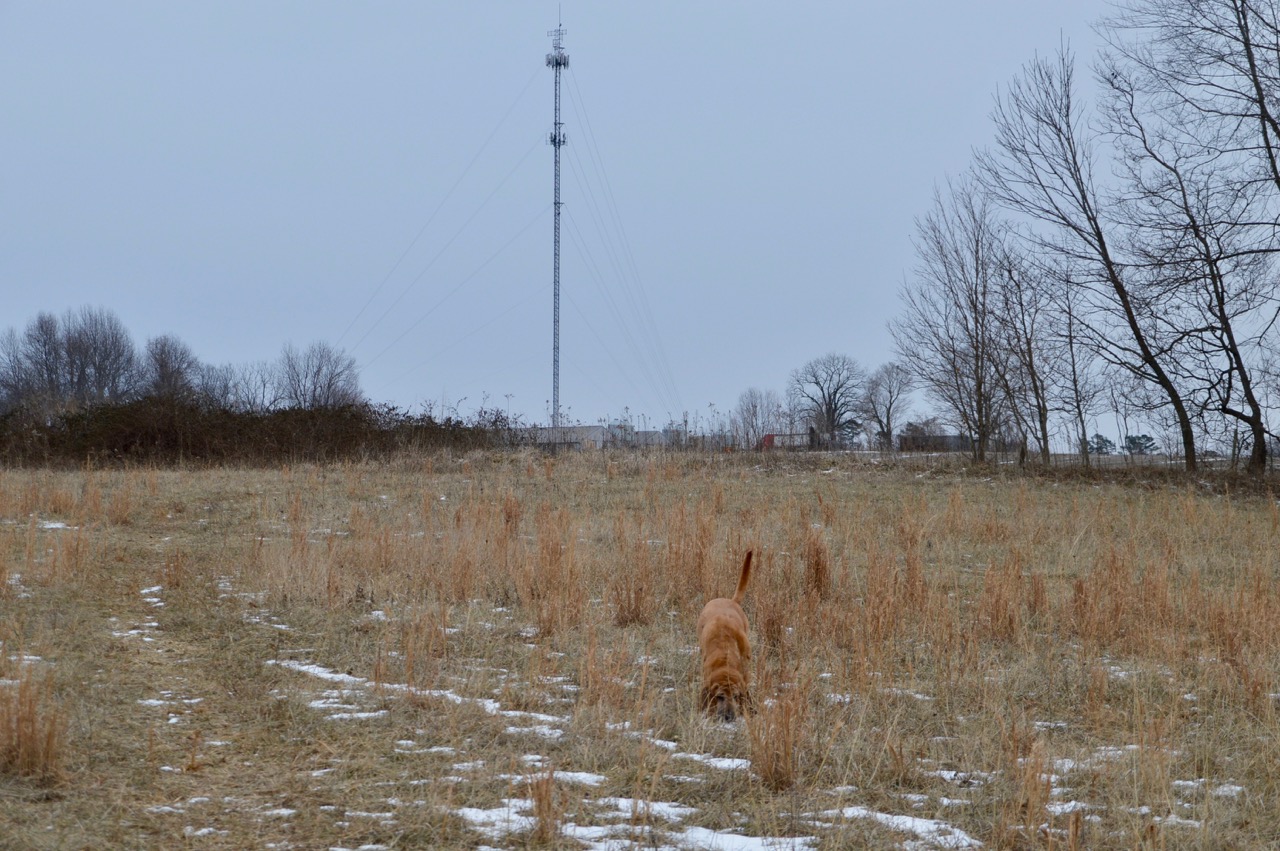 With that cold weather also slowed blogging down. I wrote a little in my private journal just to document what was taking place. As for finding anything to write about for the blog, without any hound photos, it was pretty hard ... thus a blogging vacation so to speak. 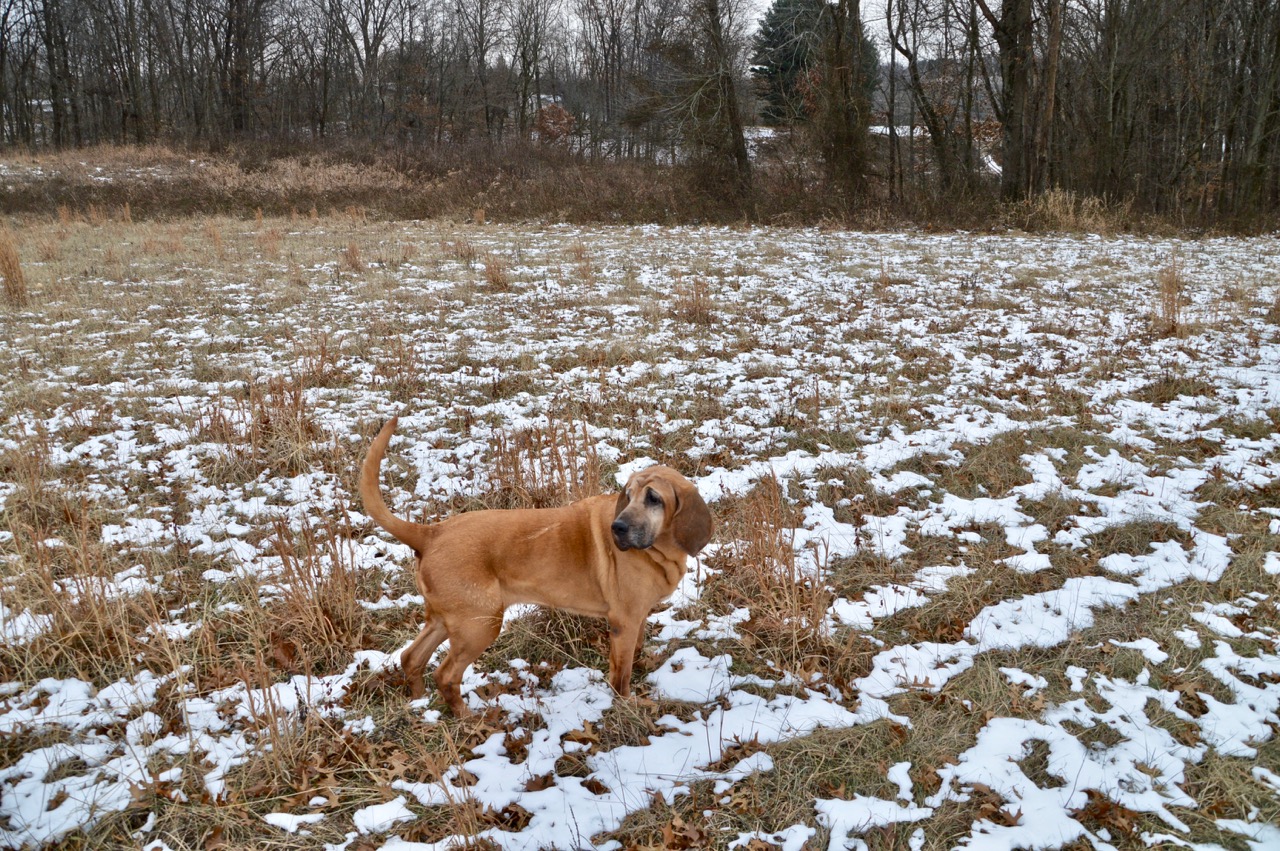 I still like my decision to upgrade to the iPhone 8plus last month. I no longer notice the larger screen. I do not find it inconvenient and the photos taken inside are sharp and clear as ever even in low light situations. I cannot say it will be my last iPhone because I know history shows that I upgrade every 16-24 months. I have done that since I bought my first iPhone 3s. 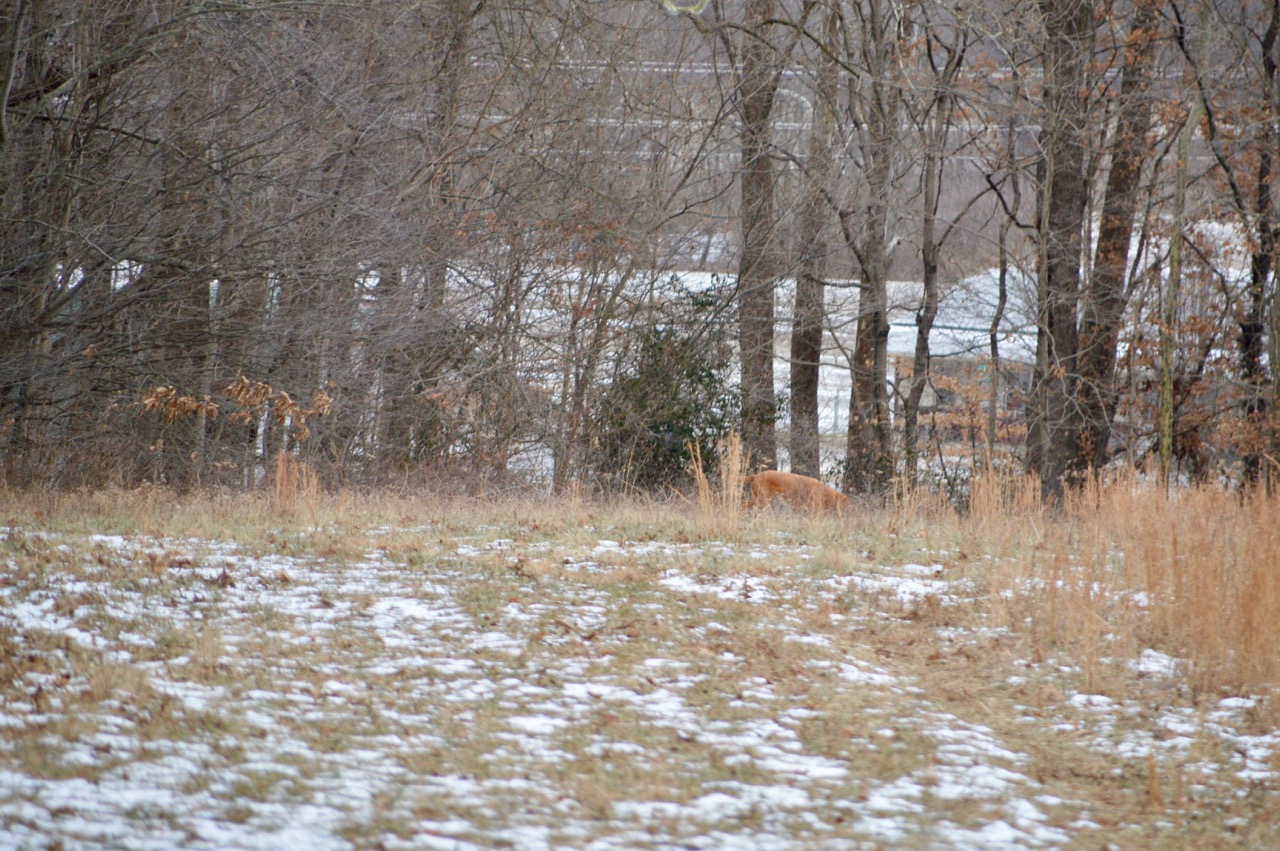 As Sadie and I were finishing the back half of the walk or really the last third of the walk, I noticed Stella walking at a pretty fast pace across the field near the house. That was much better than the option of not seeing her anywhere and having to spend time trying to find her. In the last minute I changed my mind about taking the regular path to the alternate path so we would meet. 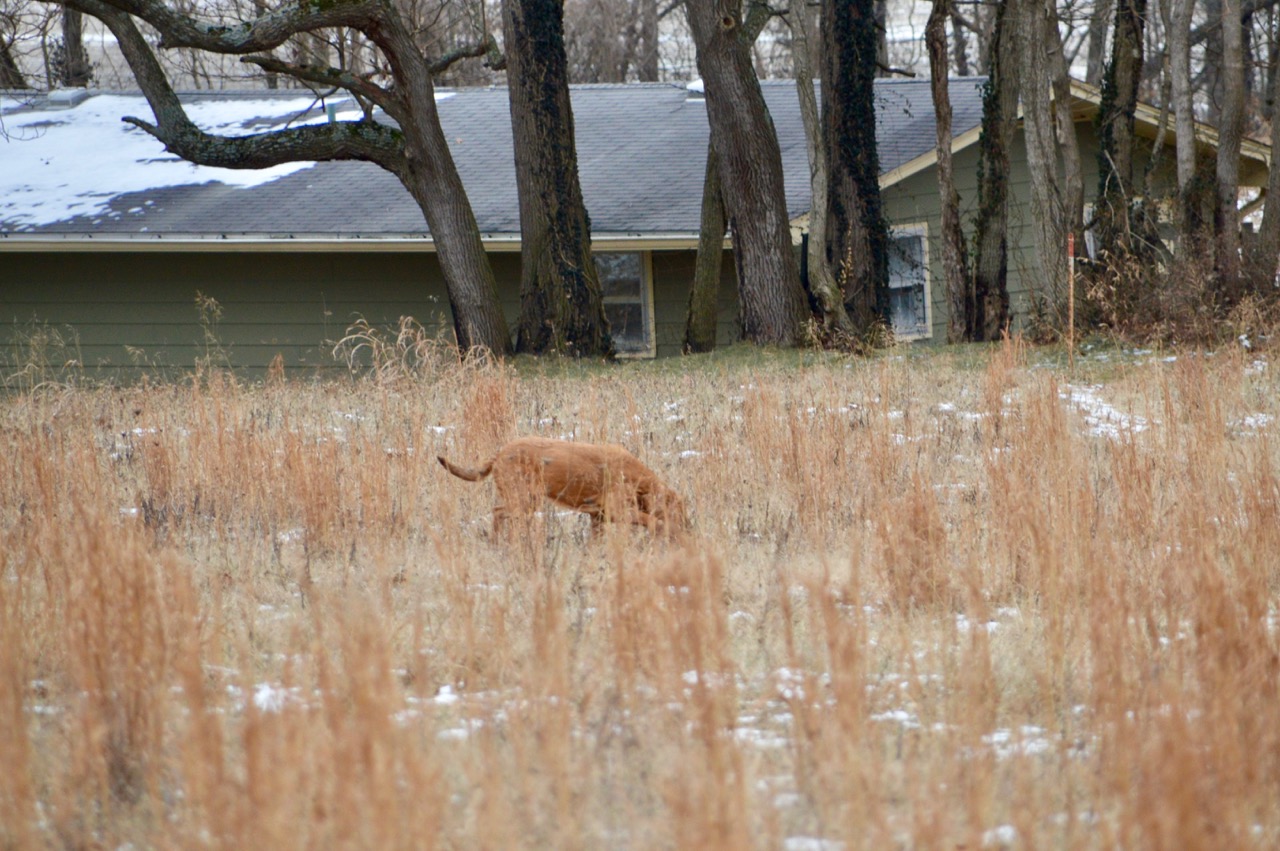 She had her nose to the ground and was semi-trotting. You can see how close she is to the path we are taking, just straight out from that property line pole with the red tip. 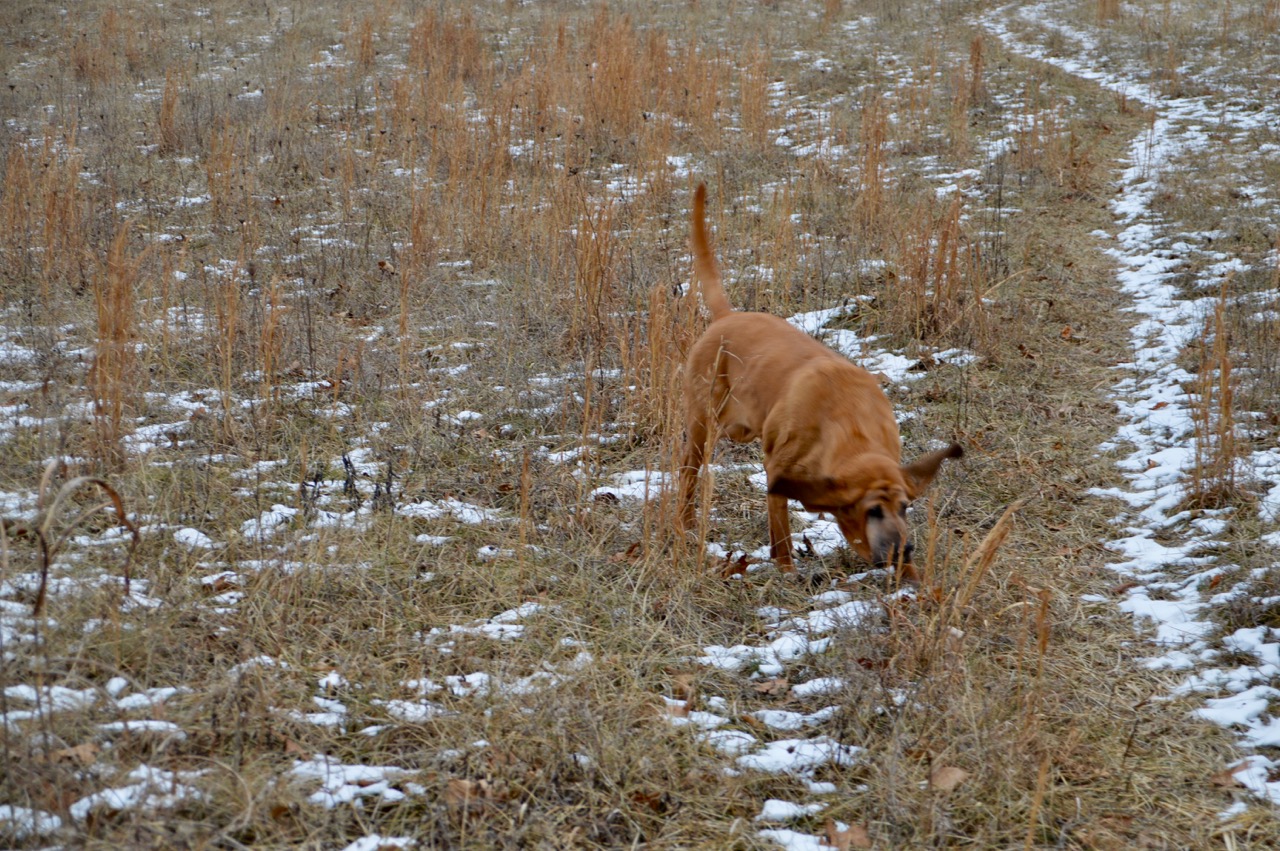 Sadie ran to catch us once she saw Stella. 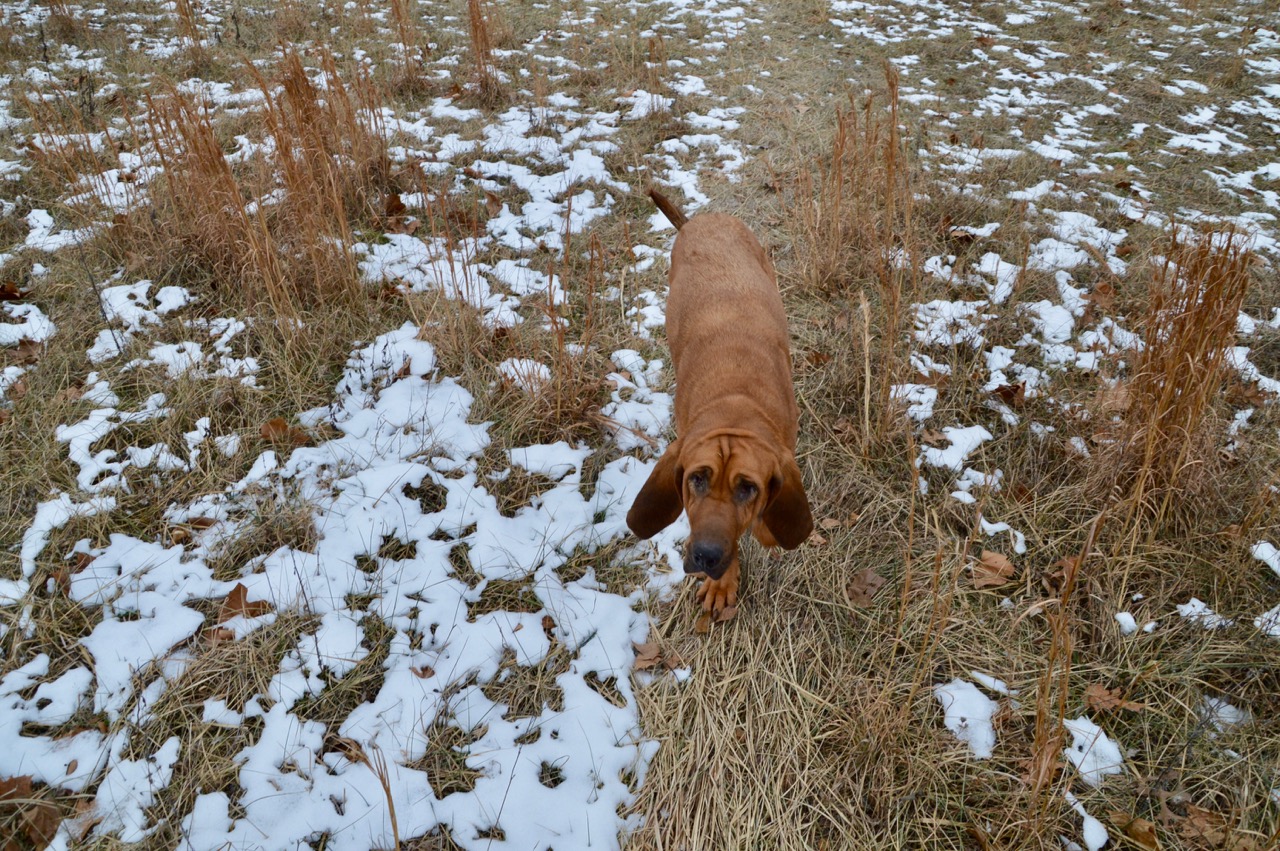 At first Stella thought she could continue doing the whole walk when I called her name. She was walking toward me, then walked right past me like she was going to do the walk on her own. That wasn't going to happen ... LOL 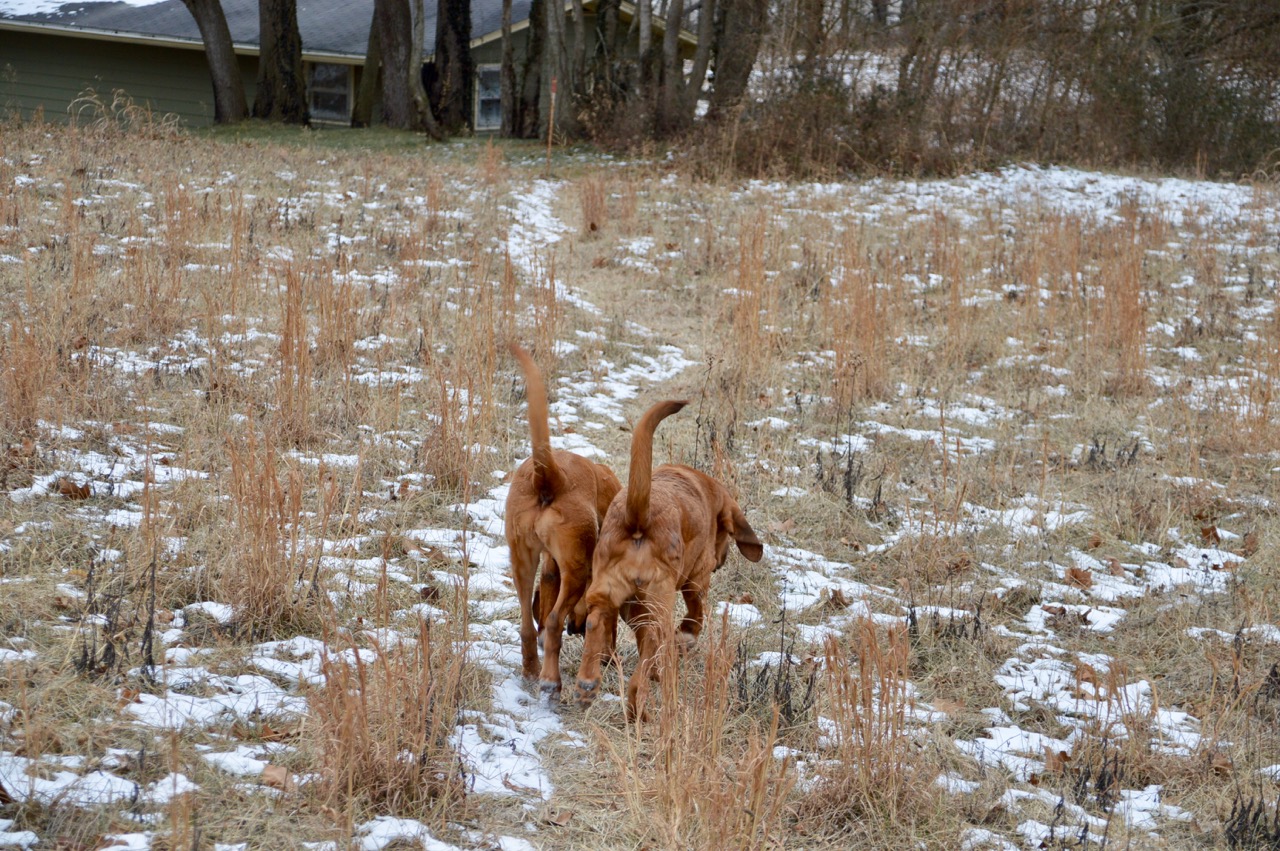 When I told her "we're going home" she seemed happy about that while doing an immediate turn and trotted toward the yard.  With both hounds trotting out in front of me did that mean they were a little cold in the 17° weather and wanted to get inside?  Neither lifted their paw and acted normal during the 12 minutes outside. 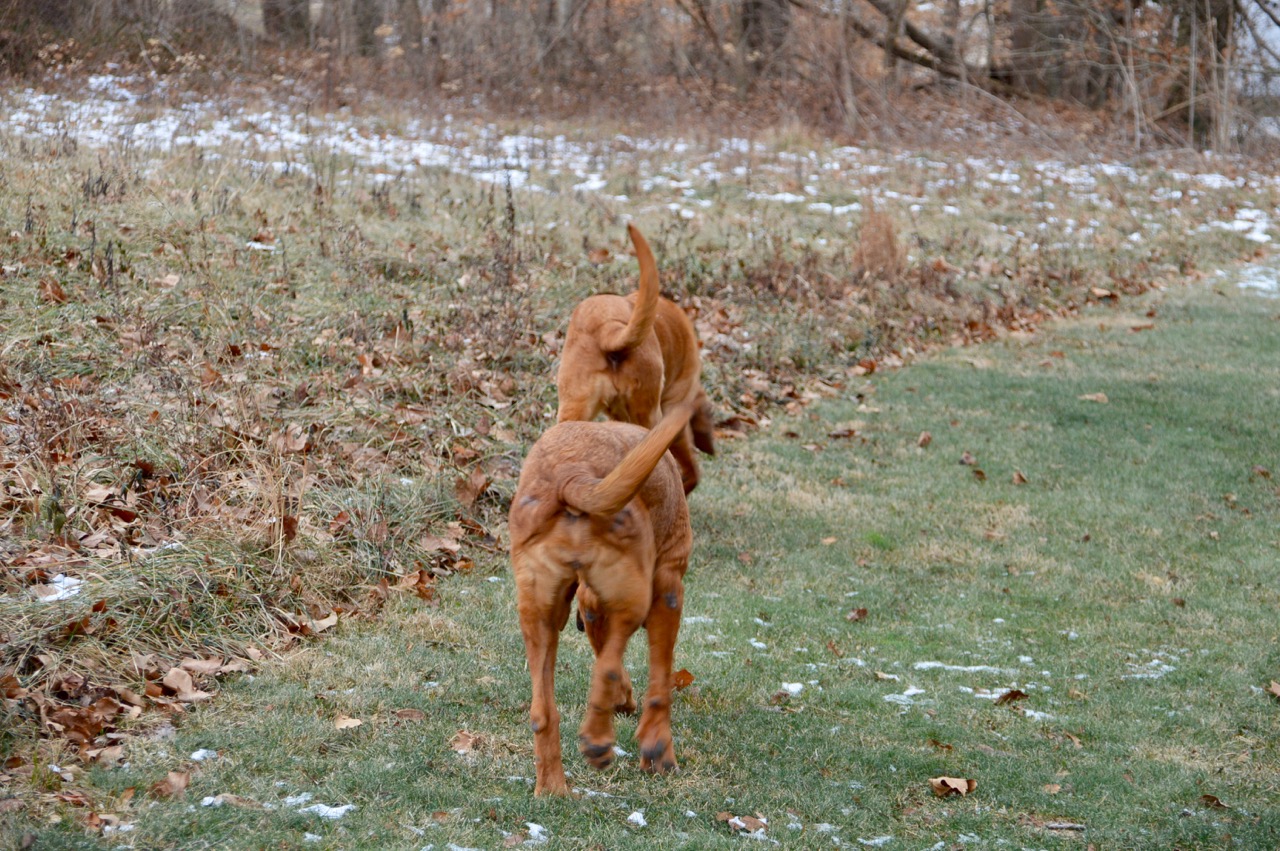 With days off from walking there were a lot of scents to catch up on in the yard. The followed the property line along the backyard all the way to the burn pile before I called them inside.

After watching some very good college and pro football games recently, I have two more NFL playoff games today. I am not really excited about the match ups today but will at least have the games on in the background, along with check college basketball. Monday night will be a great game between Alabama and Georgia. I am happy to to have the 'reminder' helping me from forgetting there is one more college game to watch.

I have tried to read books on my coffee table but can't seem to focus long enough to keep reading. I've have improved my times on a few Mahjong games finishing more of them under 3 minutes. The other app game I play is '2048' and finally have high scores on all my devices in the 35,000 point range.

The Garmin VivoSmart3 still does not want to connect to my iPhone 8+ so I have been downloading all the data into the Connect App on my iMac. That is NOT nearly as convenient as just tapping an icon on my phones home screen to see my data.

The transferring of movies and ballgames to DVD is working out well. The reproduced picture is not HD quality but it's very close. This work will clear out my DVR so I can do one of two things ... either threaten to move to DishNetwork for a lower monthly fee and a 3 year lock on cost or stay with Directv, which I like much better, and upgrade to their newest model of DVR.

That idea I had LAST winter of scanning old photos into digital form is just too slow of a process ... do I have enough trust to let a business do that for me?

The hounds are glad to be back walking and blogging from 'the tropics'of Southern Indiana.
at January 07, 2018