The Hounds Are Snowed In !! 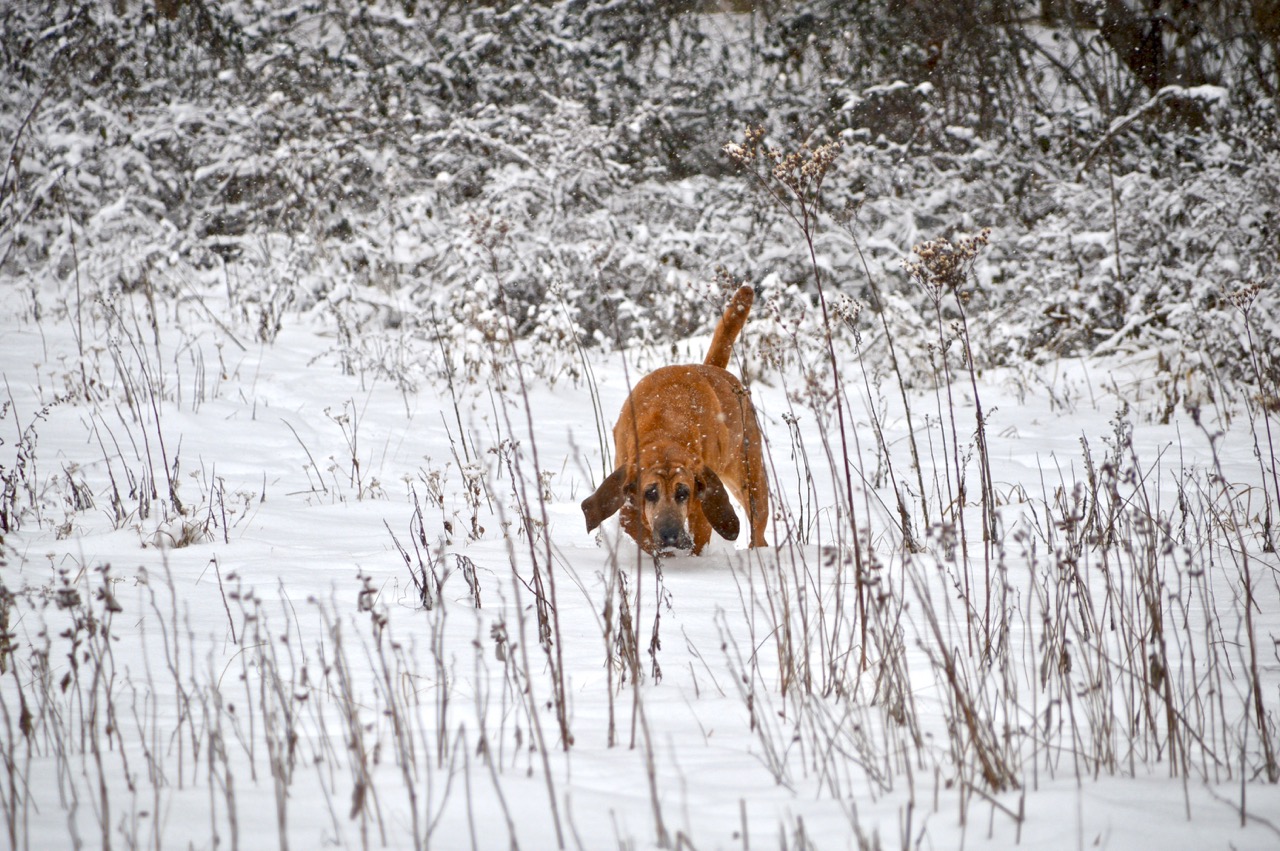 I was up late, like very very late ... so we started the daily routine by me jumping out of bed to feed the hounds at the normal time, glance outside to see how bad it was then sprint back to bed. I know they told us a couple of inches of new snow by noon today so it wasn't that much of a surprise ... but looking at the hounds in the snow and how much of their legs disappeared ... it was deep. 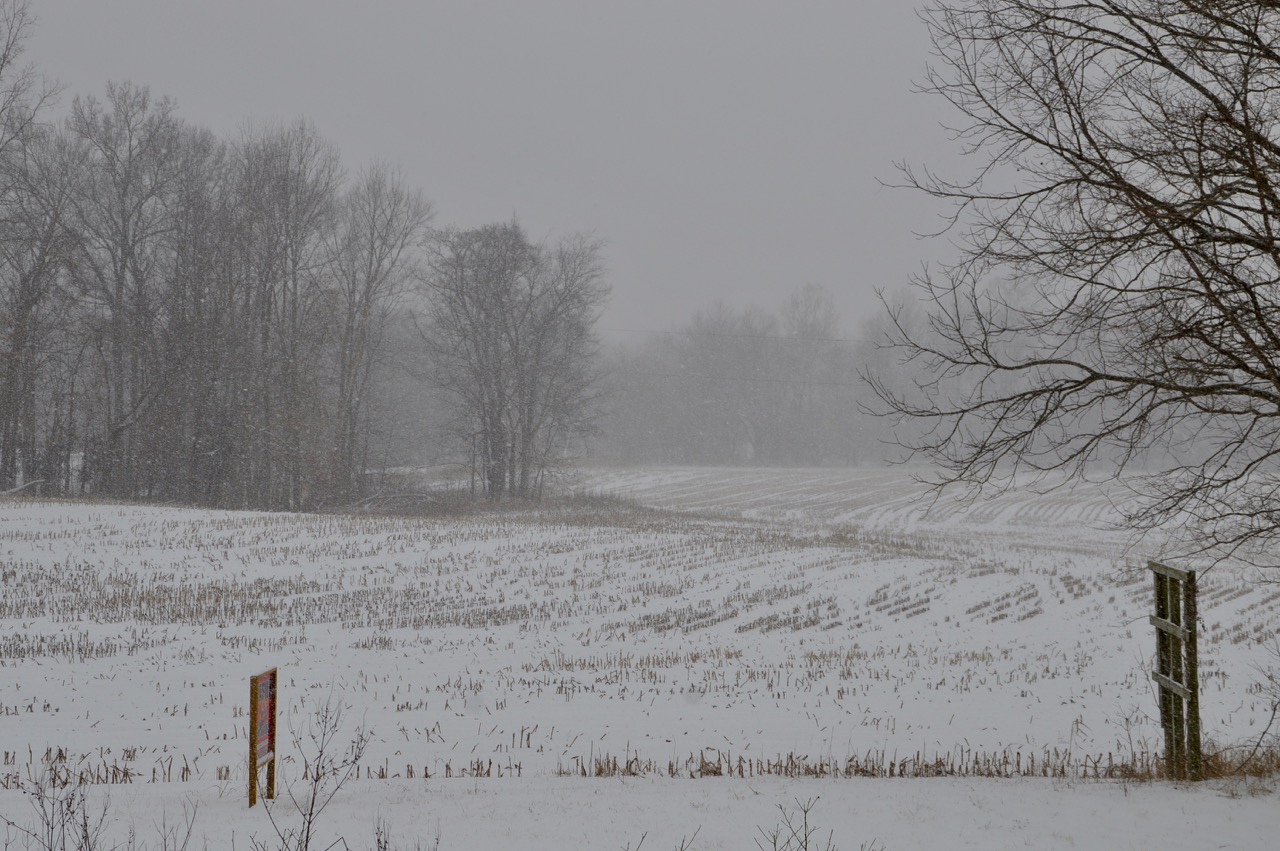 The Intellicast radar was showing the front was about finished and would pass through but up in the upper right corner it was telling me there would be "snow showers" this afternoon. Well that will be an interesting concept. One that will cancel any late afternoon walks. 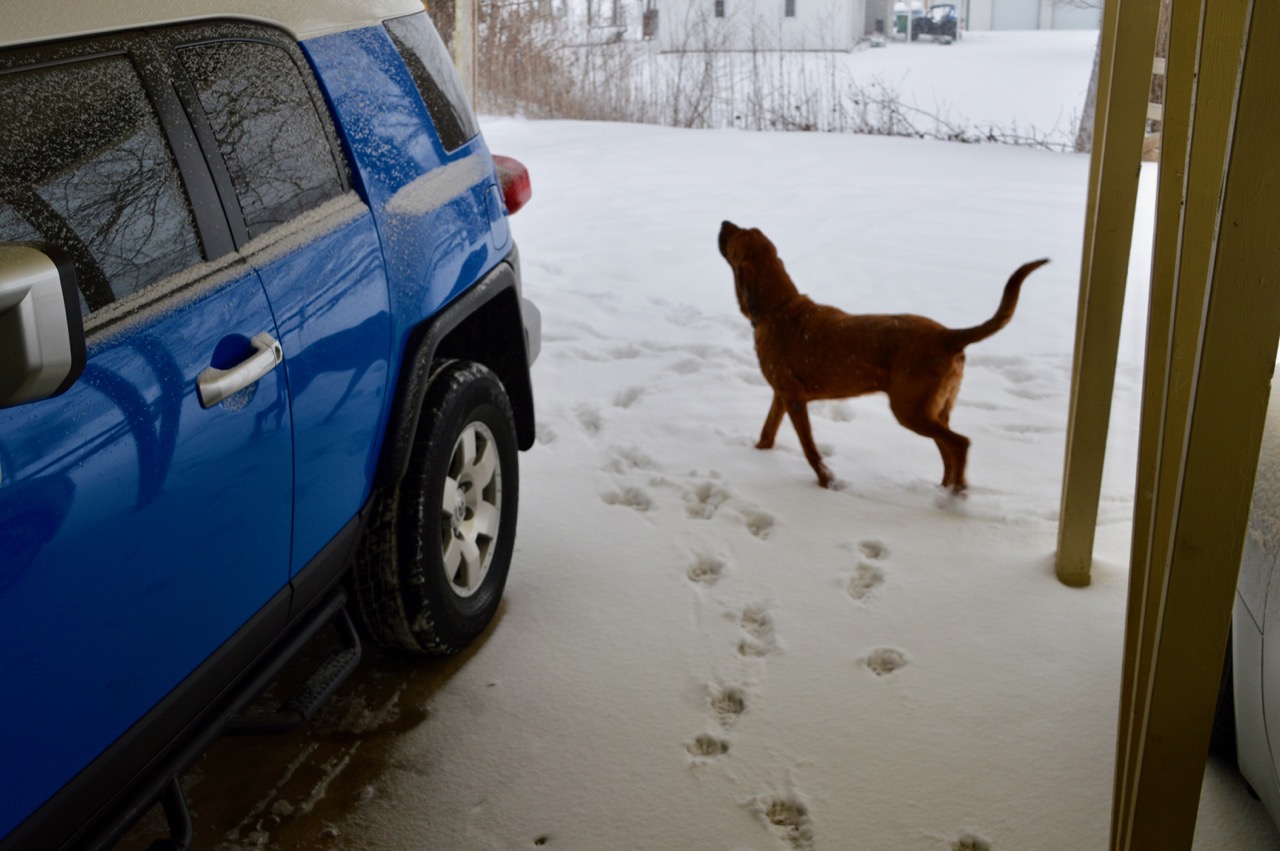 Stella had to make sure she smelled snow before getting to far out into it. I could tell the tire tracks I made last night after a quick trip to town for snack food, had disappeared. If I shovel anything it will be the carport floor out to the edge of the carport/driveway. I am not motivated this year for working outside in snow. No snowmen will be built, no snow forts ... no playing in the snow. 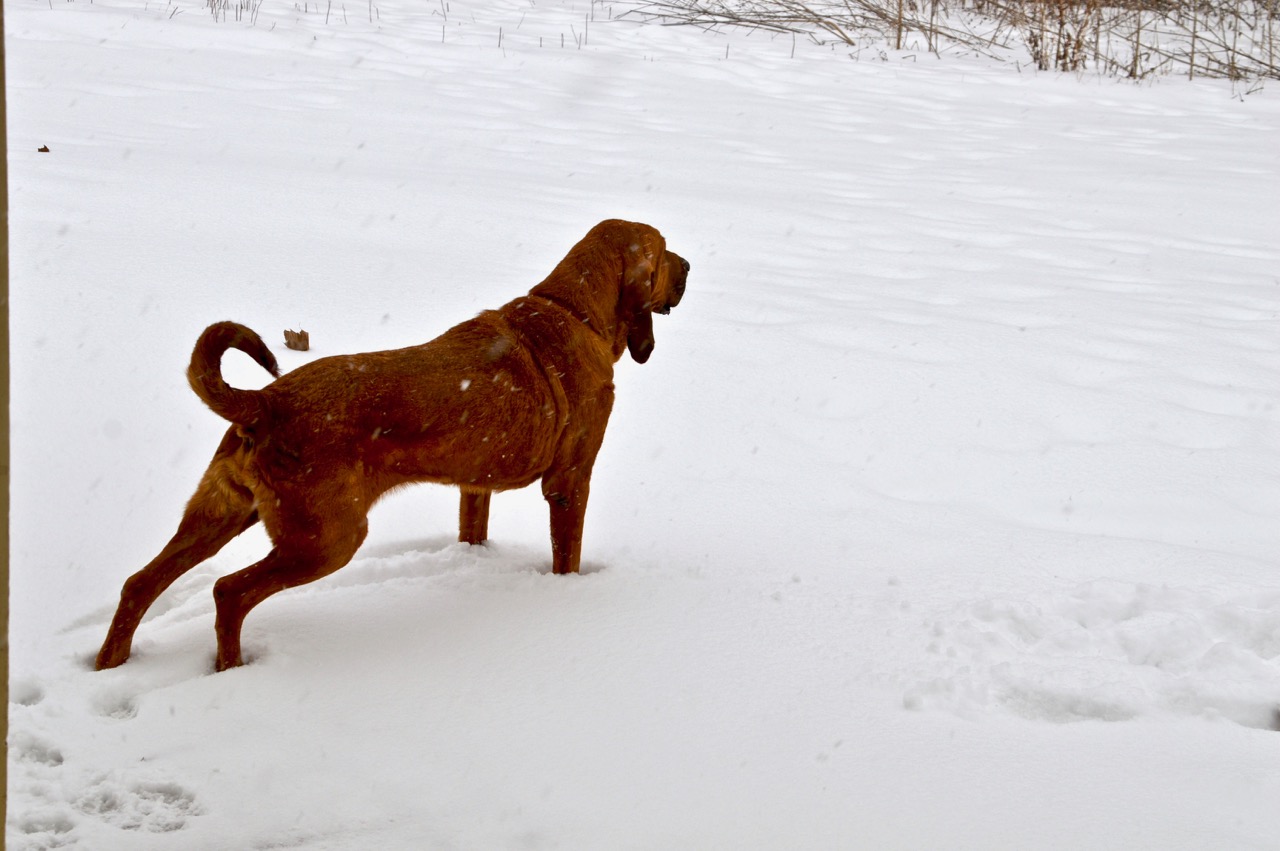 Stella decided to get a little stretching in before taking off for the back of the field. Sadie was already gone but she had to go and go bad ... it was right after her lunch and she was trained as a 12 week old puppy to go outside after she ate or woke up. She still does that on her own almost 10 years later. 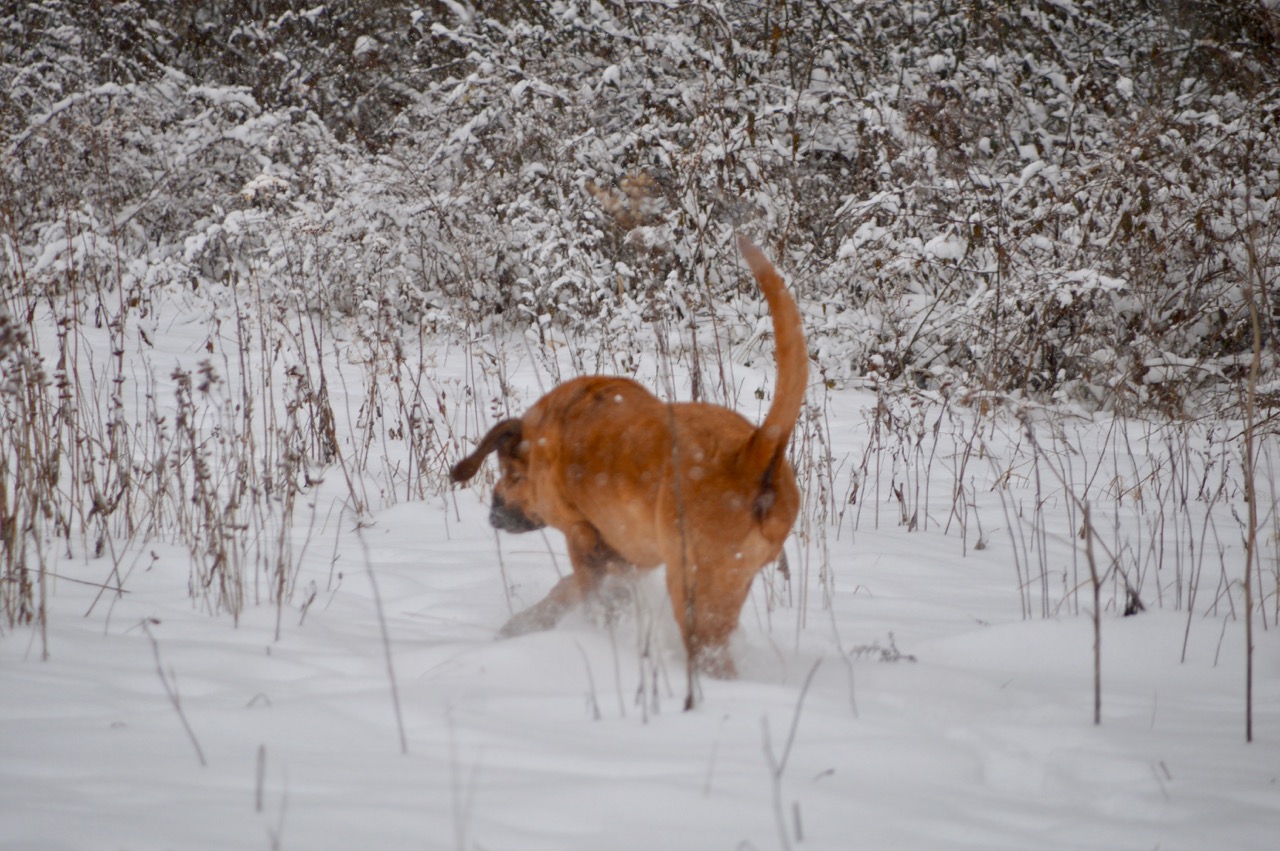 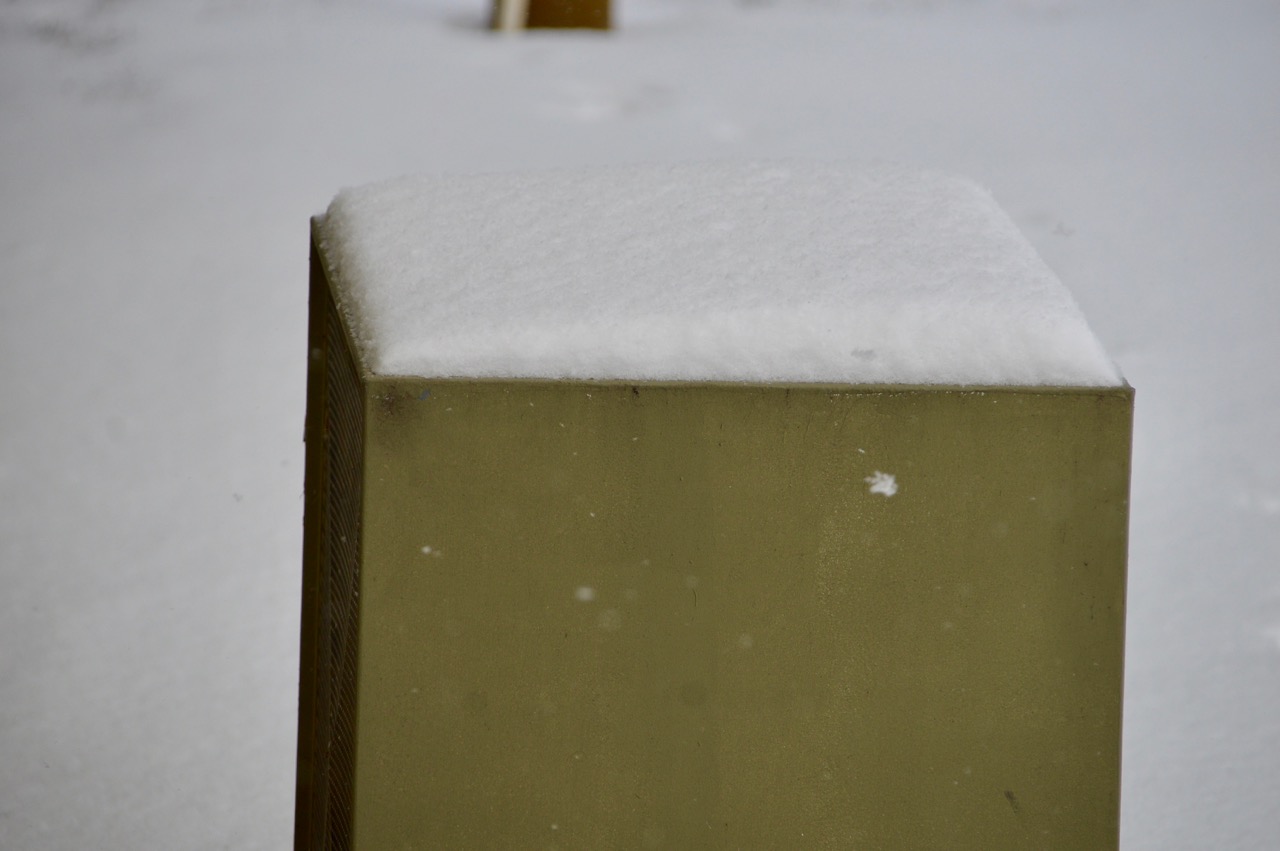 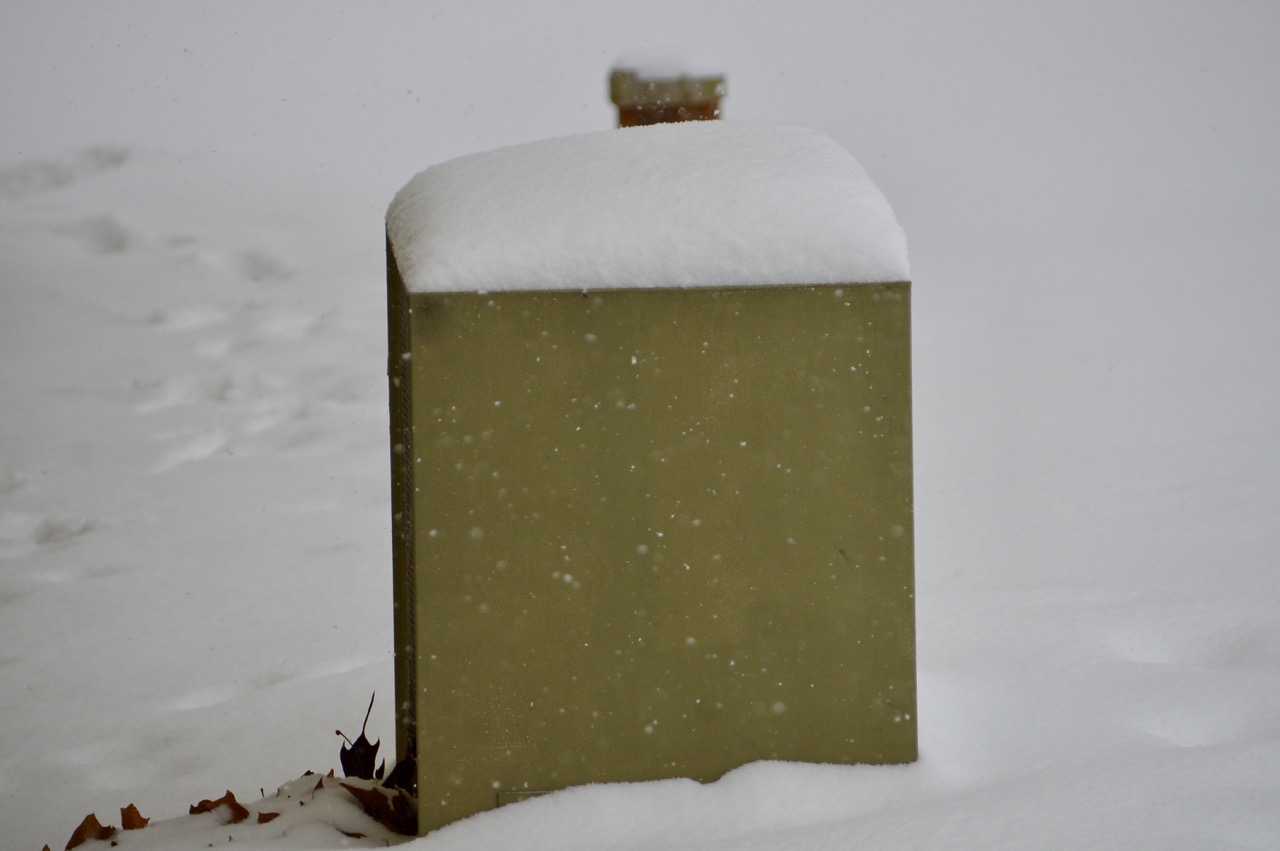 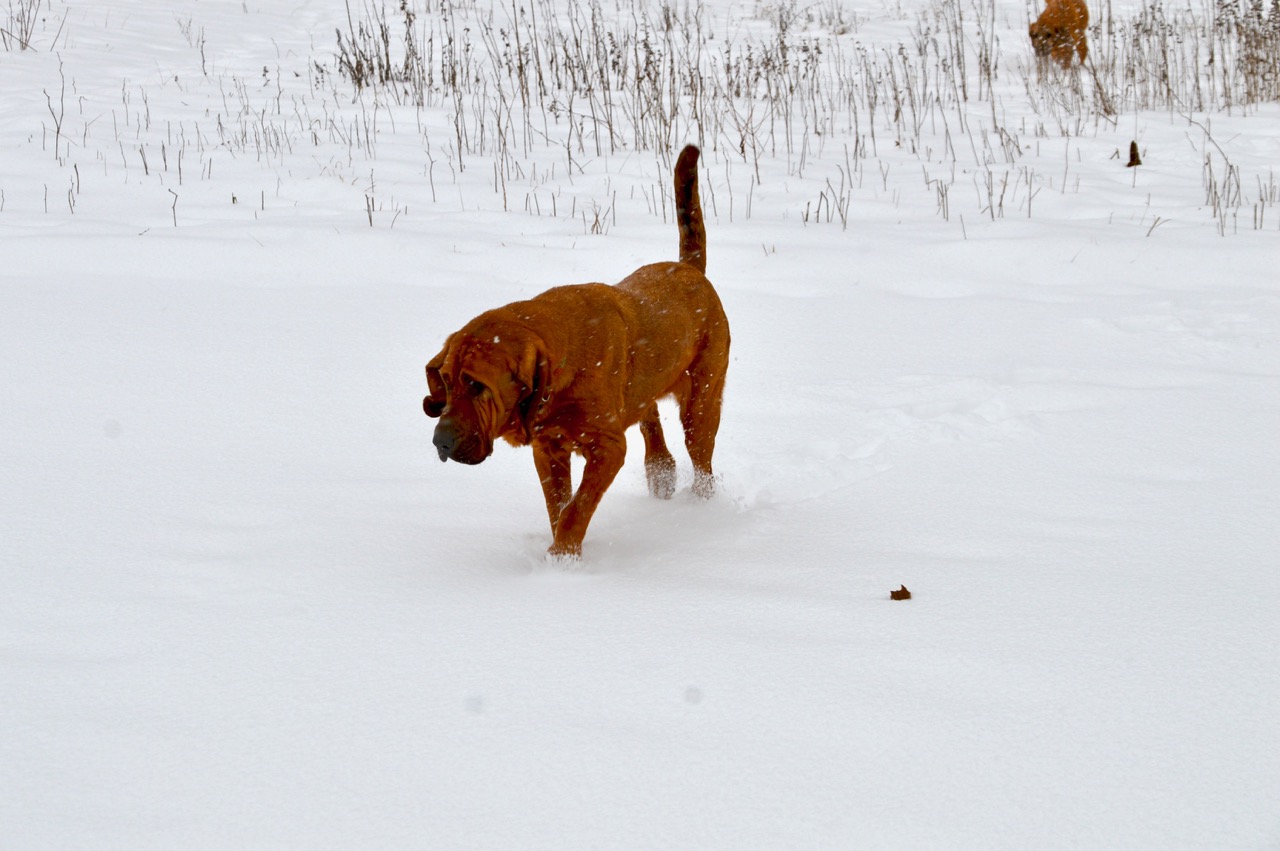 Neither hound was interested though in going for any walk when they were outside. Once they were finished dumping their tanks, they sprinted to the house. Check out Stella's legs to have some idea how deep the snow is. 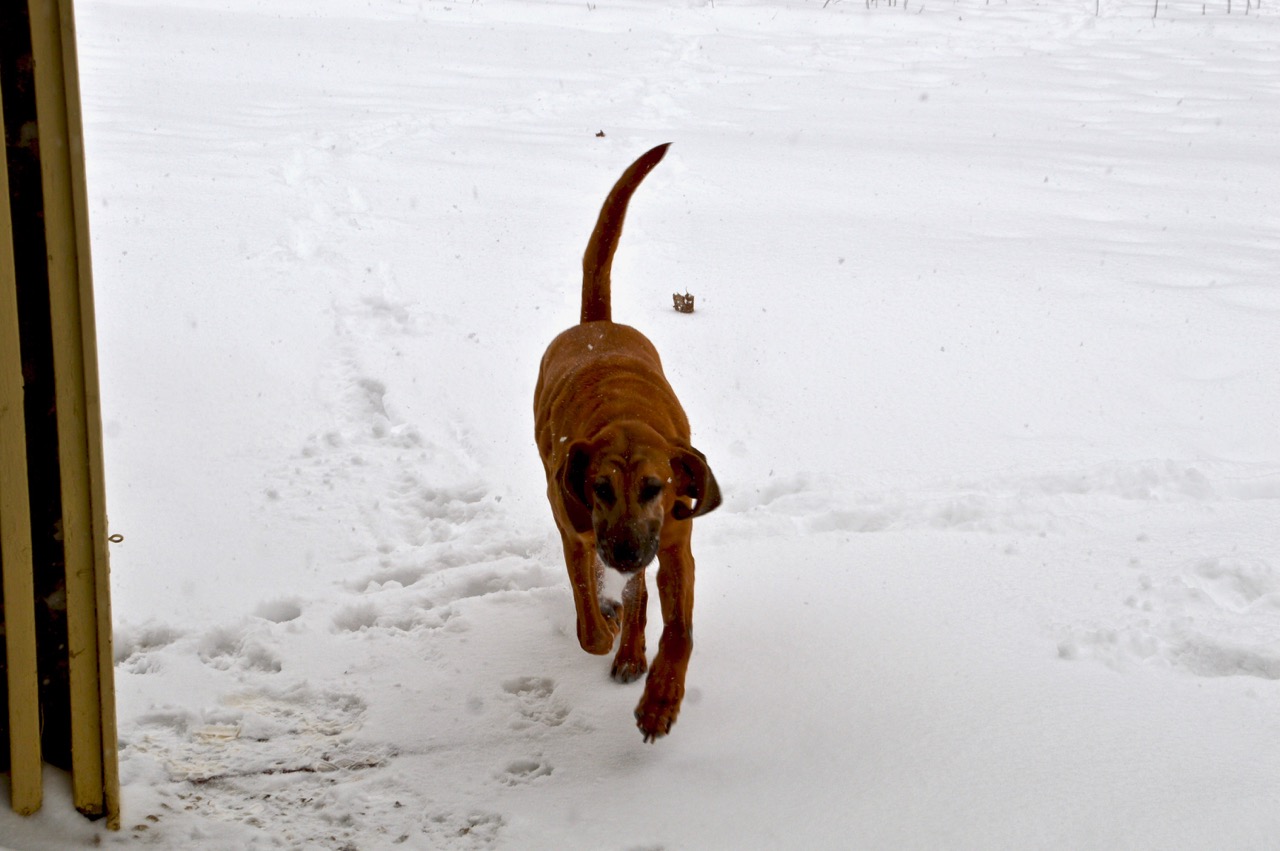 IF ... IF I decide to shovel some snow out of the carport ... I will go along the edge out to 'Winston's Patio' ... those 6 red brick blocks. But I think I might wait and see if those snow showers help me out clearing off the snow. Of course it is going to get colder tonight after midnight so that is telling me all of this stuff is going to turn to ice. 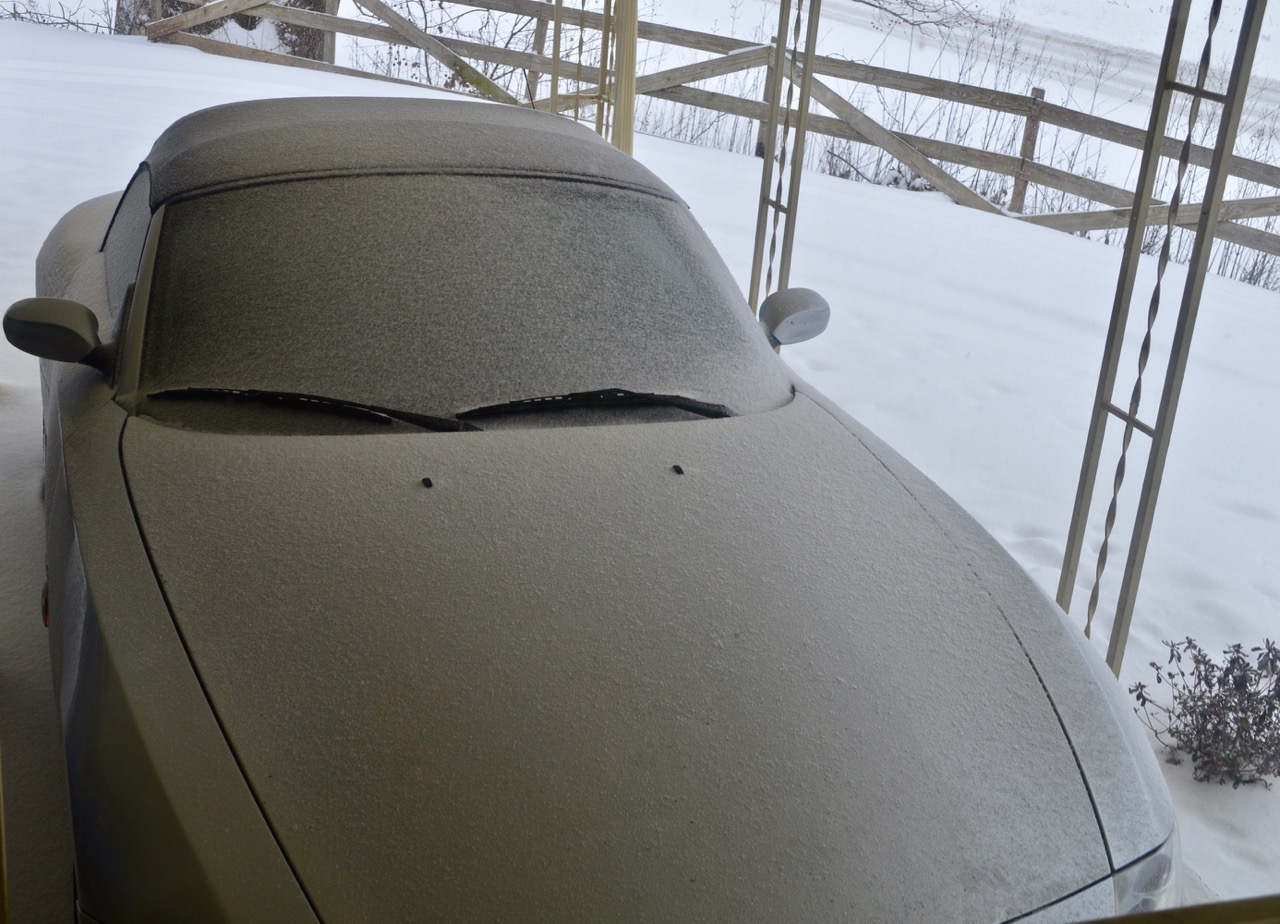 No ... I didn't screw up. It was late in the fall and the Z4 was dirty enough to wash. I only do hand washes, no car washes ... but it was too cold to wash the car at the time. I thought I'd at least get one day last November to wash the car and the put the Z4 under the car cover like I do every winter, but that one day never appeared until last Thursday ... wasn't interested.

I wasn't going to put a dirty car under a car cover, giving the wind any chances of moving that car cover a little and scratching the car's surface. I have seen sports cars left outside in all kinds of weather in Chicago, Boston, NYC ... so a few inches of snow won't hurt. 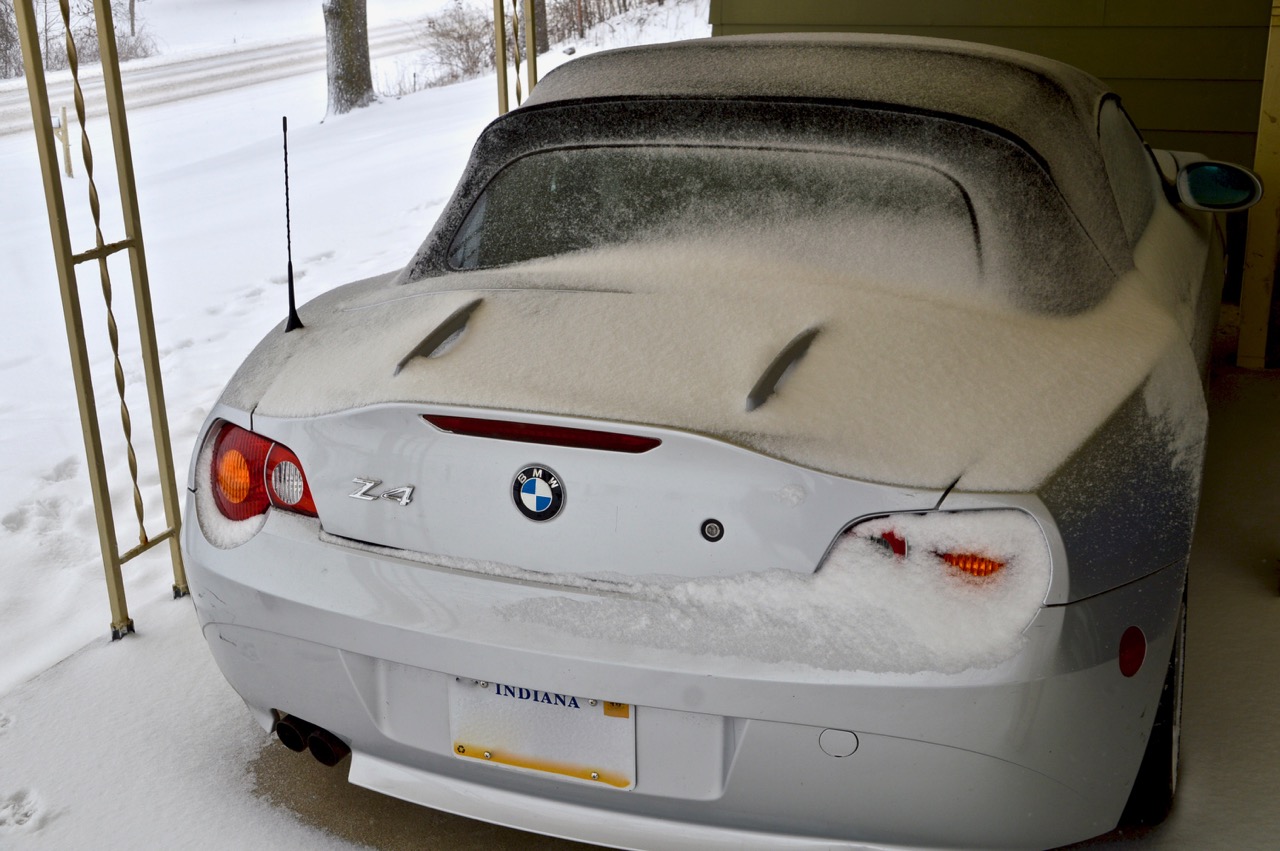 Yet, it does hurt a little to see this much snow blown over the back of it. Maybe I could slide down the driveway and take it out for a high speed run today to blow the snow off of it. That was typed 'tongue in cheek' by the way for anyone not able to pick up on my sick humor ... I don't even like taking the FJ out because of the amount of salt that you see mixed in with that dark colored sand on the highway to the left.

She went out first thing in the morning before breakfast but she had seen enough ... she turned and sprinted for the couch after her lunch when I said "get outside" ... Not interested.

Well the snow has stopped at this point of the post. It feels pretty warm at 22° and a wind chill of 14° ... it is temping to put the boots on and see how far we get on the walk ... but its quite a mess to clean up between the two bloodhounds feet, legs and stomach, then the snow sticking to my boots, jeans etc ... no mudroom and to cold to clean up outside.